My friend Brian recently challenged me to name how many of our 58 national parks I had visited thus far.  As we compared our lists, Brian reminded me that one of our nation’s newest parks, Congaree National Park named for the Congaree Indians, was just over the border from me near Columbia, South Carolina.   I had to admit, I had never heard of this park before, but reading about the largest old growth floodplain forest in the US peaked my interest.  The forest canopy is reported to be the tallest deciduous forest on earth, comprised of “champion” trees over 135 feet high.  But it was the offer of the FREE ranger guided canoe tour that had me planning my weekend getaway to this unfamiliar wilderness. 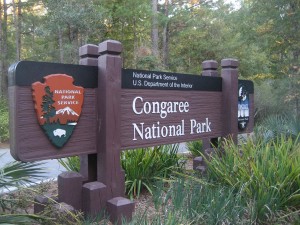 I don’t know if it was just me, or if this park was exceedingly hard to find.  I headed toward Columbia with an out of date map, no GPS, and a naïve dependence on the big brown road signs that I have come to associate with parks and playgrounds.   However, I went 40 miles out of the way and made 270 degrees of turns, getting 5 miles within the park before I ever saw a sign.  Considering there are only 58 “official” national parks in the entire nation, it seems the Columbia tourist bureau would promote this attraction from every freeway, but not so.    It would take me most of the afternoon, a stop at the local beer market, and directions from an obviously intoxicated motorcycle rider to finally find the turnoff. 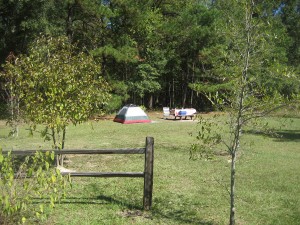 Congaree only has eight campground sites and a backcountry camping area, neither which can be reserved.  There did not appear to be any other accommodations in close proximity, and since I was running late I was a bit apprehensive about my overnight arrangements.  I had hoped to camp, but was also prepared to drive back into Columbia to find a hotel if necessary.  However, I got lucky with the second-to-last remaining site just as dusk was falling.  Although it had “pit toilets” only, it offered a peaceful and serene setting on the edge of the forest with a nocturnal symphony to lull me to sleep. 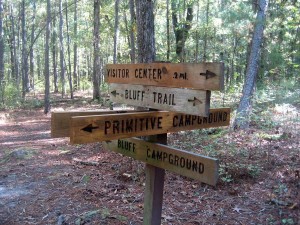 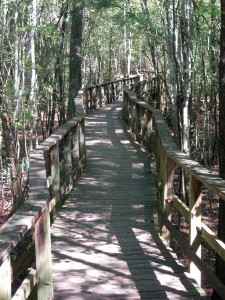 Although the park is 24,000 acres, most of Congaree National Park is wilderness area due to the floodplain which floods on an average of ten times per year.  It is a short drive into the park to reach the Harry Hampton Visitor Center, which also marks the entrance of the 2.4 mile, Self-guided Boardwalk Trail through the old growth forest of Bald Cypress, Water Tupelo, Loblolly Pine, and assorted hardwoods.   This boardwalk is arranged in a square pattern with 21 interpretive stops along the way and benches to sit and soak in the sounds of the forest.  It contains both an Elevated Boardwalk six feet above the forest floor, as well as a Low Boardwalk that puts you down at the level of the wide bases of the Bald Cypress trees, the largest having a circumference of twenty-seven feet! 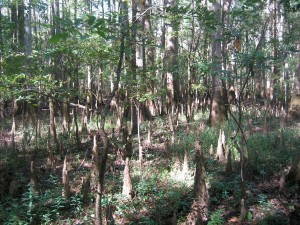 I always thought these characteristic “stumps” surrounding the Bald Cypress trees were once smaller trees which were now fallen or rotted from the swamp.  However, they are actually called “knees,” thought to either provide oxygen to the roots in the low oxygen swamp, or to act as buttresses to anchor the tall trees in the watery soil.   These knees growing up to seven feet high beneath the draping Spanish moss from the branches overhead give the eerie atmosphere of an “enchanted forest.” 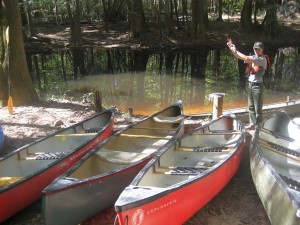 The real excitement for me came in the ranger guided canoe trip.  Reservations are only taken one day per quarter for these trips, so they are harder to win than a Top 40 radio contest.  I sat for two hours hitting the “redial” button over and over last September until I finally hit the lotto for an October weekend. 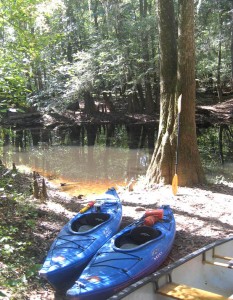 We had a total of four canoes and three kayaks on the tour.  Since I was a “solo paddler,” I got one of the single kayaks, which made me even happier!   We paddled down the Cedar Creek at a leisurely pace while William, our Park Ranger and Mike the park volunteer offered tidbits and trivia about the founding of the park, its diverse occupants, and the ebb and flow of the ecosystem.   We didn’t see much wildlife;  a couple of brown water snakes, some turtles, and a golden silk orb-weaver spider, named for the golden silk color of her web, but the outing exceeded my expectations.  It was both a relaxing and educational way to see more of this national park by a leisurely paddle deep into the wilderness. 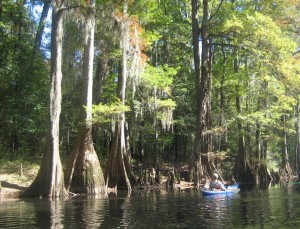 A pleasant way to explore the wilderness

I will close with this quote from the park brochure:  “The Congaree holds more secrets just waiting to be discovered.  The eternal rhythms of wind and calm, fire and ice, floods and droughts, life and death remind us that we are here only temporarily.”   I am grateful to be here long enough to explore one more of our National Parks! 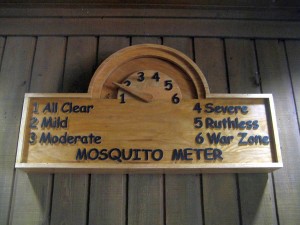