My absolute favorite thing to do in Acadia National Park is hike the over 150 miles of hiking trails. There are so many choices! 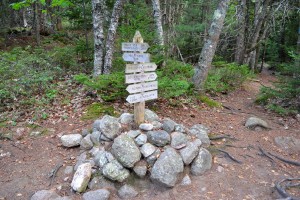 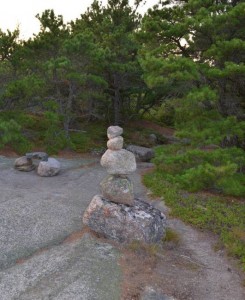 All trails have an abundance of cairns or blaze markers

And all affording some gorgeous view of a lake, a pond, a stream, or the ocean, such as this… 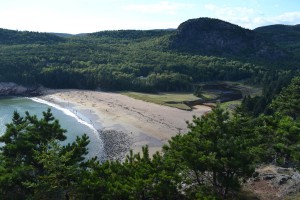 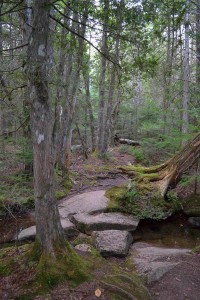 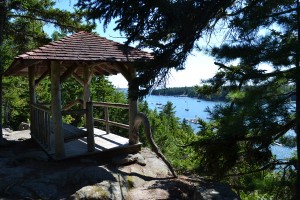 My plan was to get in as much hiking as possible this day, so I set off to tackle a circuit that would have me summiting four mountains; Saint Sauveur Mountain, Valley Peak, Flying Mountain, and Acadia Mountain, for a total of six miles and 1,644 ft in elevation gain, according to my trusty topo map. Now these may not exactly sound like “mountains” to some, but ask my knees…they would beg to differ!

I love a “circuit hike,” one where you don’t have to backtrack, and although I knew this one was aggressive during my time frame, I was determined after planning my hike to “hike my plan!” 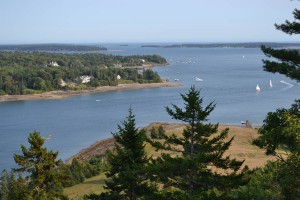 Coincidentally, Mount Desert Island, location for Acadia National Park is shaped like a lobster claw, with the main park attractions on the eastern side. Therefore, I purposefully chose the western side of the island, known as the “quiet side” to avoid the Labor Day crowds. I had the mountain all to myself for most of the day, with a stop atop Valley Peak overlooking Somes Sound for a lunch break in complete solitude, where I enjoyed an indescribably delicious sandwich from the Morning Glory bakery. Brie cheese, grilled onions, arugula, and honey mustard on a sour dough bun. Do you know how hard it would be to find a sandwich with arugula where I live now in rural Texas? They are just now breaking into honey mustard, let alone brie cheese. Texans would snarl, “Where’s the BEEF??” 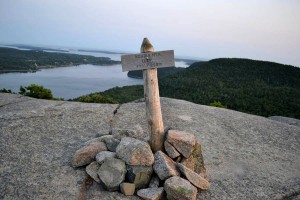 As I was approaching my fourth and final mountain, Acadia, the highest of the day, I was quickly losing daylight. Being on the far eastern seaboard, I had not accounted for sunset being almost a full hour earlier than it was back in Texas. I really wanted to complete the circuit as planned, but I knew I had not prepared for loss of daylight before the end of the hike. My only choices were to try to complete the last summit prior to sundown, or take a shortcut on the gravel fire break road. I thought, “I did not come to ANP to hike on a gravel road!” so I decided to press on, but just pick up the pace.

I got to the summit about 20 minutes before sundown, and there was only one person at the top, “Mike from Central Mass.” He was experimenting with a new camera from the perfect vantage point overlooking Echo Lake and the Western Bay beyond. We struck up a conversation about photography. I said I hated to run, but I had to be at the bottom of the mountain before dusk. He asked, “WHAT?? You aahhn’t stayin’ to watch the SUNSET??” I told him I had stayed too late already and had no light, to which he replied “I got THREE! You can use one!” So I stayed until after the sun had dropped and painted the sky in lavenders, pinks, corals and blues, then hiked down the mountain with my new BFF, Mike, in total darkness. At least, that is, until the gorgeous full “blue moon” began to rise. 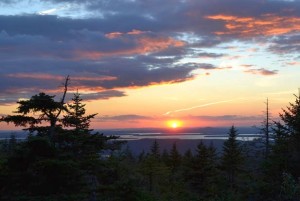 Doing a full moon hike has been on my “bucket list,” for a long time, as they were offered in Georgia but I never could get my timing right on a weekend with a clear night sky. Well, I can now say that I have done a night hike, and it was “once in a Blue Moon!” What a serendipitous experience, indeed!