Through the “kindness of strangers,” who I now consider great friends, I am driveway surfing in Sequim, just 3 blocks from Dungeness Bay.    I mentioned to my Winnie friends, Scott and Jan from Eugene that I really wanted to visit the lavender festival.  After all, Sequim is “The Lavender Capital of our Nation.”   But I was late in making my reservations, and all the campgrounds were full for the weekend.   So Scott and Jan contacted their friends Kay and Bill, and before you know it, I had five star accommodations for the week! 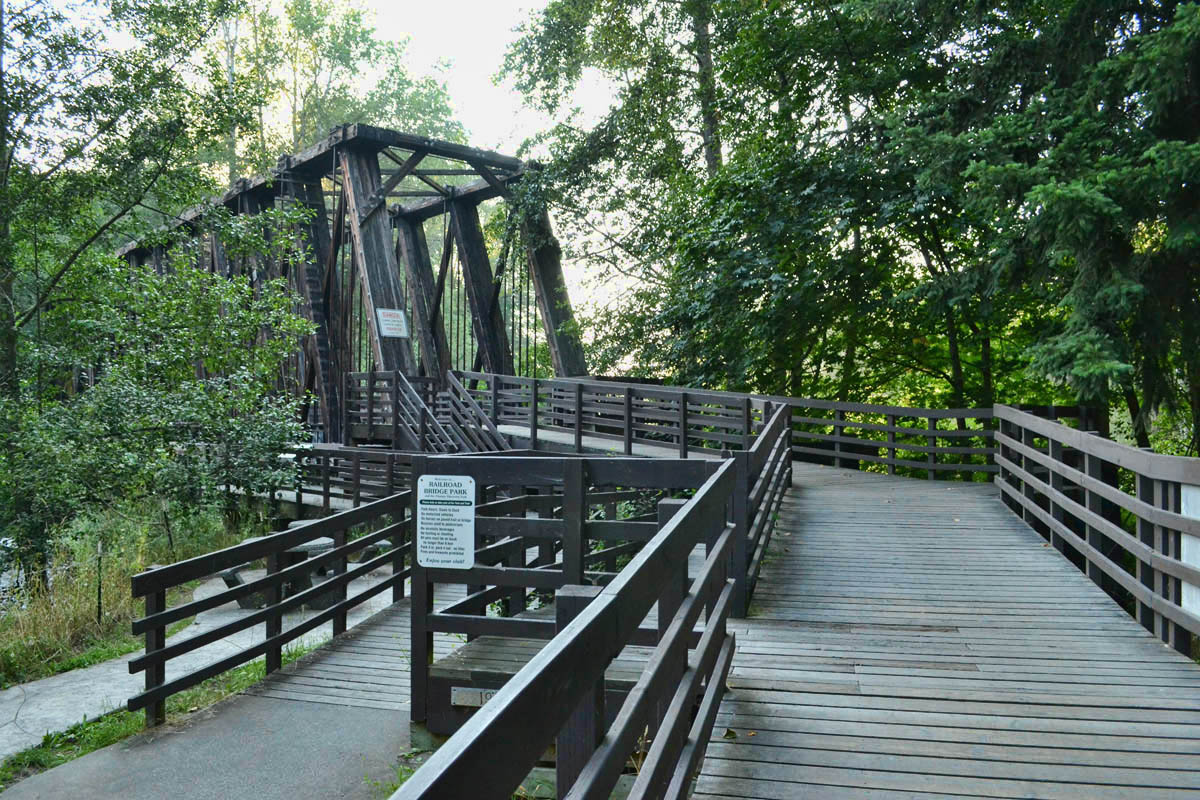 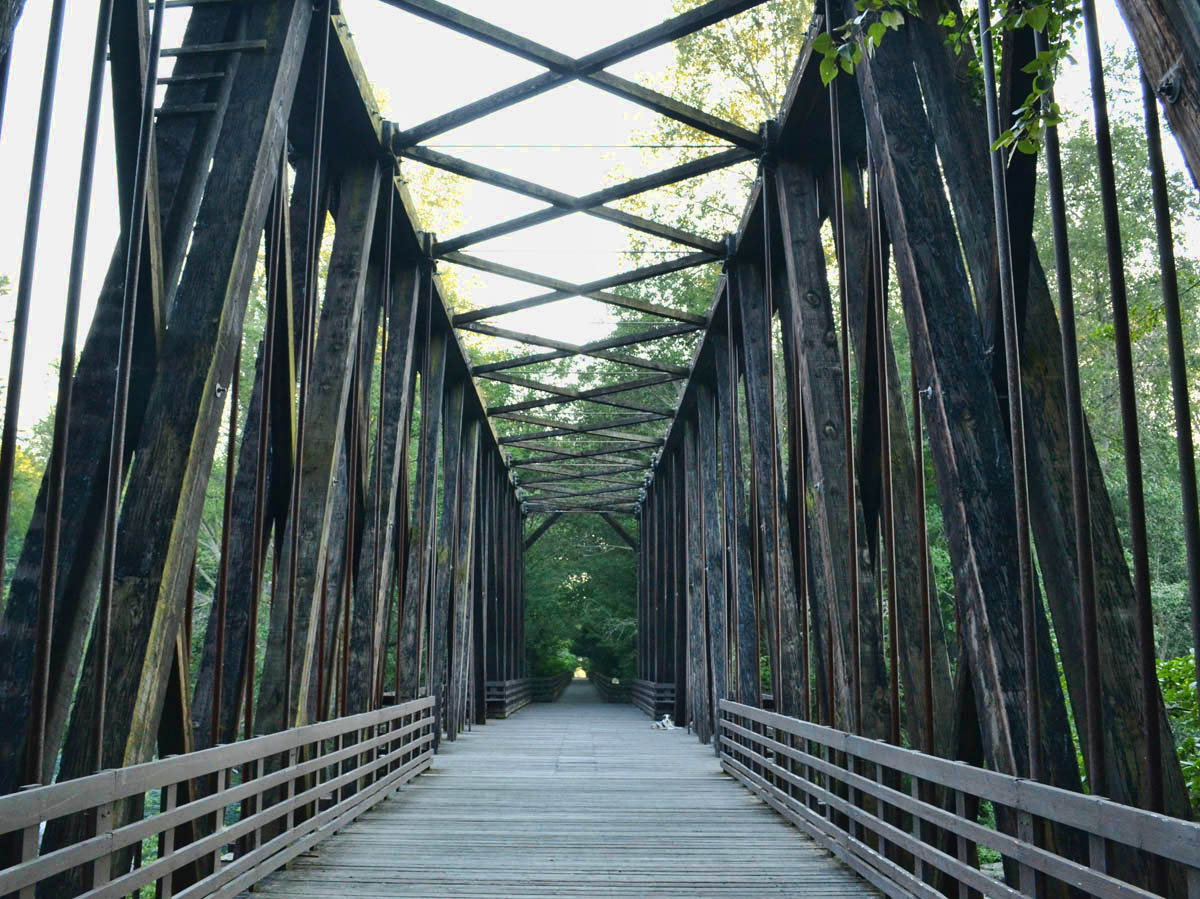 The 130-mile Olympic Discovery Trail runs across the bridge.

There is plenty to do around Sequim, with beautiful U-Pick Farms and nice trails for hiking and biking.  My driveway hosts, Kay and Bill, are the consummate ambassadors to their town, even providing me with welcome brochures and driving me around on a tour to show me their favorite hiking spots.   And I was surrounded by beauty in my “mini-botanical garden / wildlife park,” parked amidst their beautiful garden where the fawns came to graze each morning. 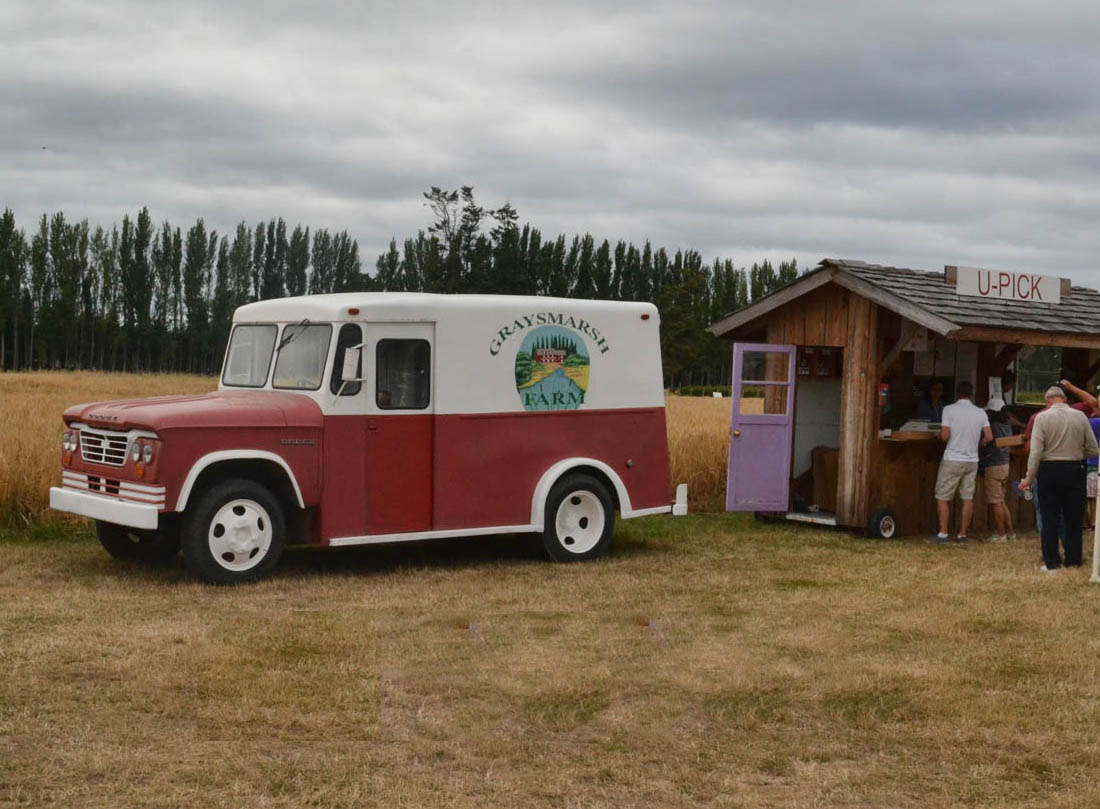 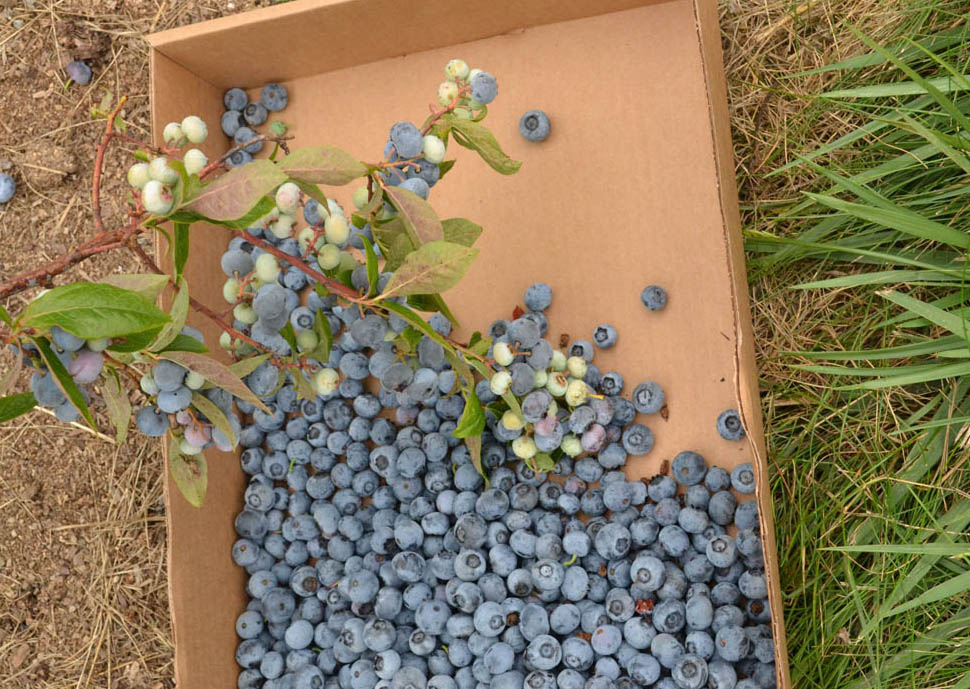 The man instructs, “Put your fingers beneath the bunches and fondle them until the ripe ones fall off.” eeuww. 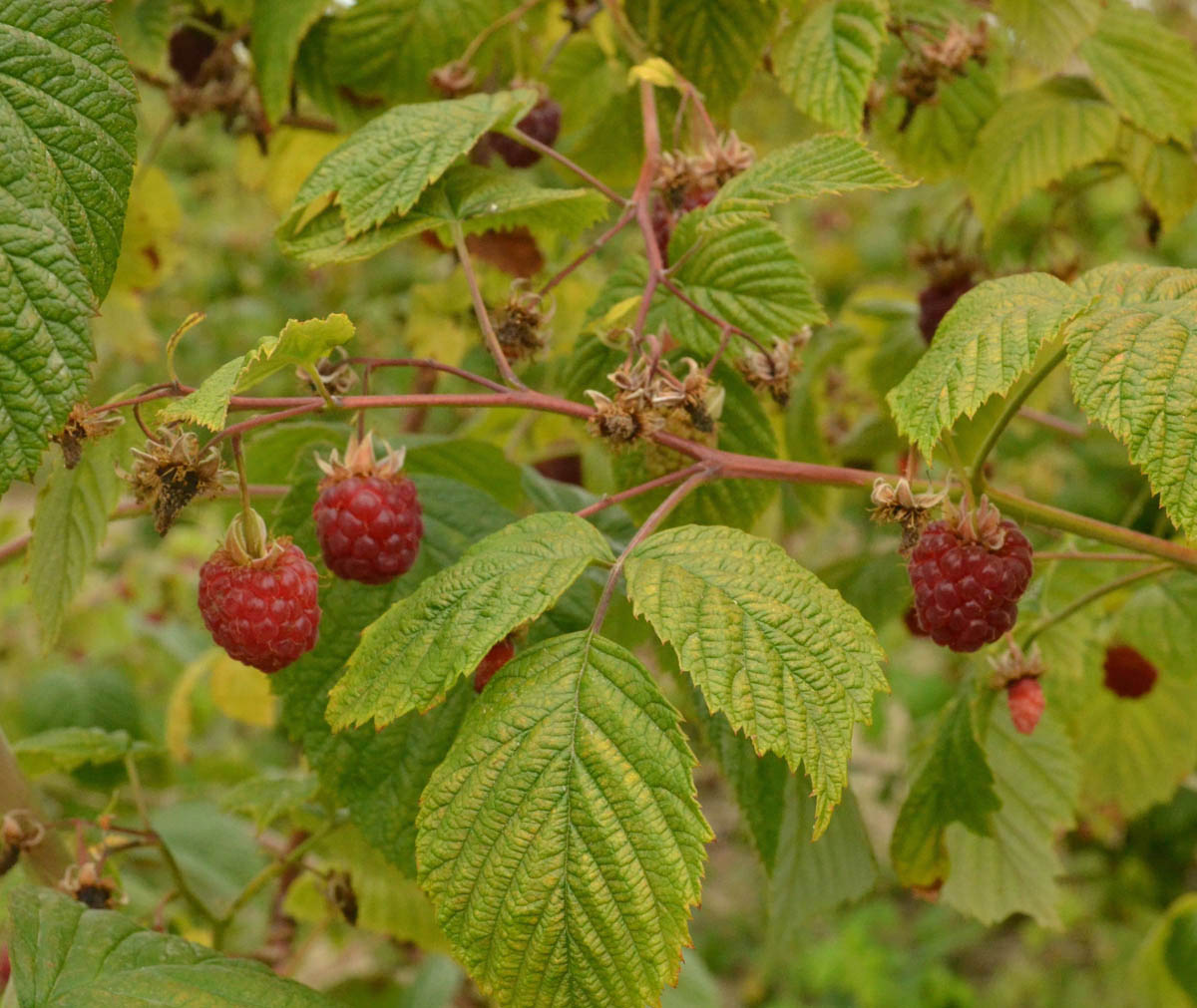 Never had a raspberry plucked straight from the vine before. Tastes like sunshine… 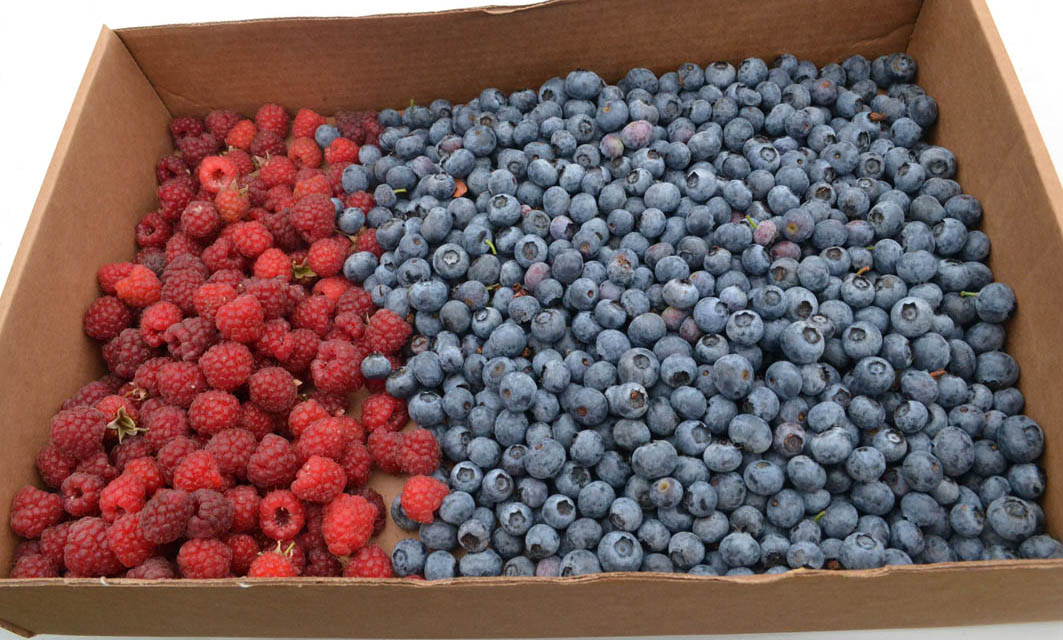 The fruits of my labor…literally.

BUT!  There was something out there beyond the lull of the fog horn, calling my name.  At the end of the five mile Dungeness Spit, there she was, the Dungeness Lighthouse, blinking at me, saying “Come.  Come to me, you lighthouse nut!”  But a half mile hike through the Dungeness Wildlife Reserve, followed by five miles of beach-walking put this hike at eleven miles round trip.  Just beyond my personal limits.    My longest hike since my 2002 “tramping” in New Zealand has been Springer Mountain in Georgia at nine miles.  But I was in better shape back then.   So I knew the New Dungeness Light at eleven miles was just beyond reach. 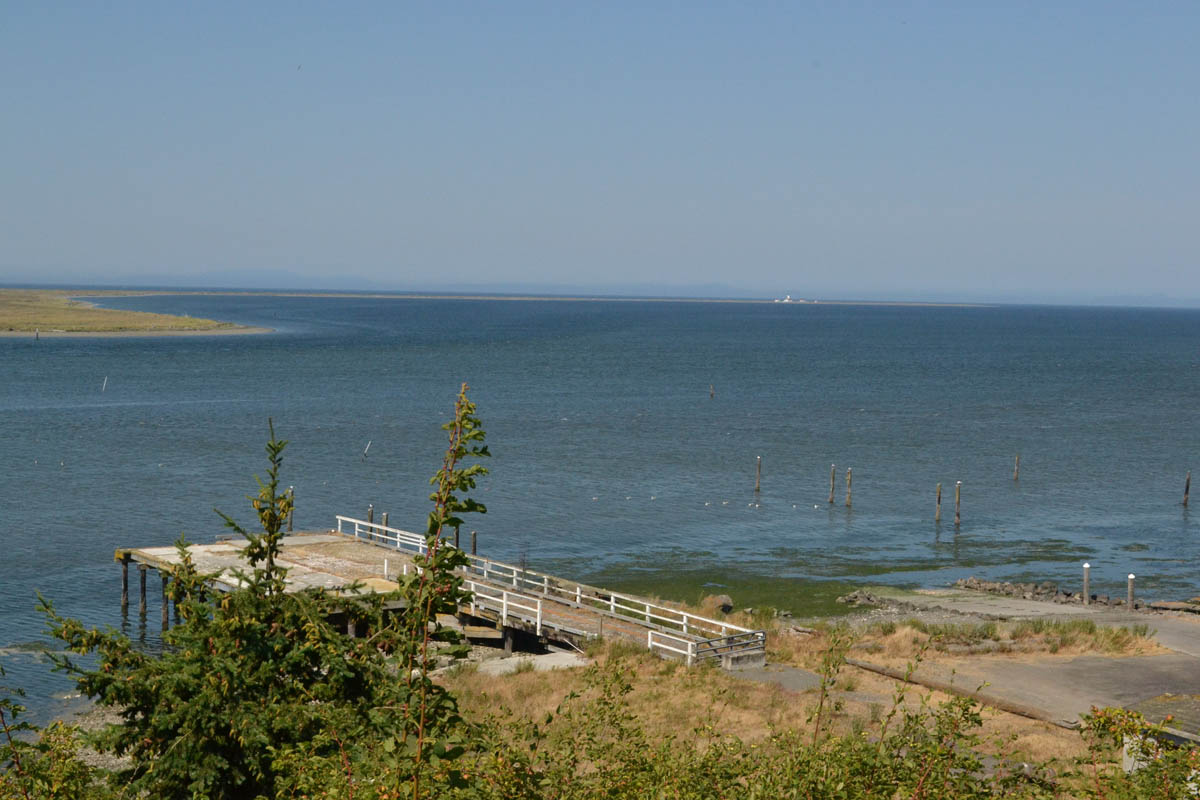 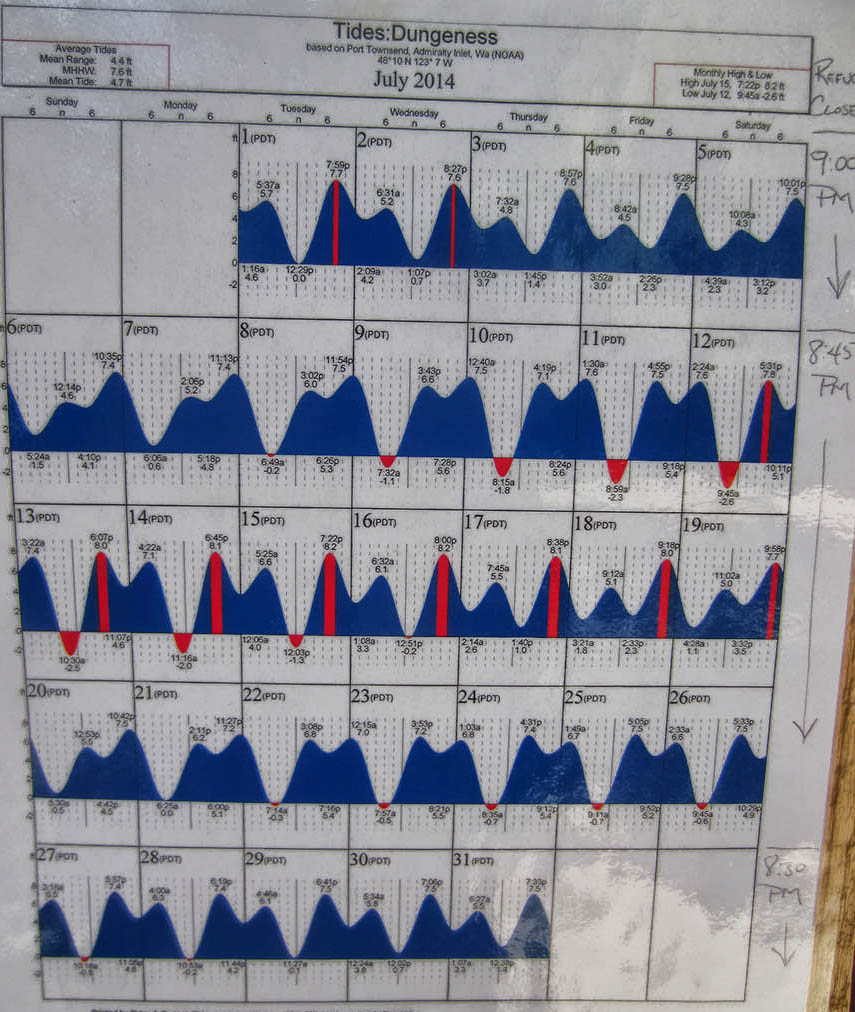 But what kind of lighthouse nut was I anyway, that I would not at least try to stretch myself beyond my personal limits?  I have never been one for lobbying for my limitations.  Besides, no self-respecting lighthouse nut would ever let a little thing like foot pain get in their way!

The Dungeness Spit is the longest natural sand spit in the US, and the New Dungeness Lighthouse, built 1857, sits at the very end.  As I stand on the shoreline gazing out in the distance at the tiny white dot on the horizon, I think to myself, “I’ll bet NINA would do it!”   Nina from Wheelingit fame is the only person I know who loves lighthouses maybe even more than me!   So I email her…

“Look what’s out there, way out on the horizon…beckoning, calling me like a Greek Siren with her seductive song.  ‘Come to me, you Lighthouse Nut.’   Just a mere 11 mile hike out to the end of the spit and back.  I am so tempted!”

I thought Nina and Paul were in Port Townsend, so the best I could hope for was a few words of encouragement telling me I should go for it.   But not only were they on their way to Sequim, Nina (of course) had already scoped out the hike, and was planning on giving it a go!   So we talked about details and tide tables, and before I could chicken out, we had a plan…

The hike must be made at low tide, or it is a real ankle-roller.  I had already walked the spit at high tide, and knew I had no chance to make three miles, let alone eleven, crawling over giant driftwood logs and large granite stones.  The volunteers at the Dungeness Wildlife Reserve kiosk strongly recommended leaving two hours before low tide to allow ample time for hiking on hard packed sand.  This would give just enough time to tour the lighthouse, have a bit of lunch, and get back before the six foot tidal swing.  So there was a small window of opportunity, in fact just two days out of our overlap in visits. 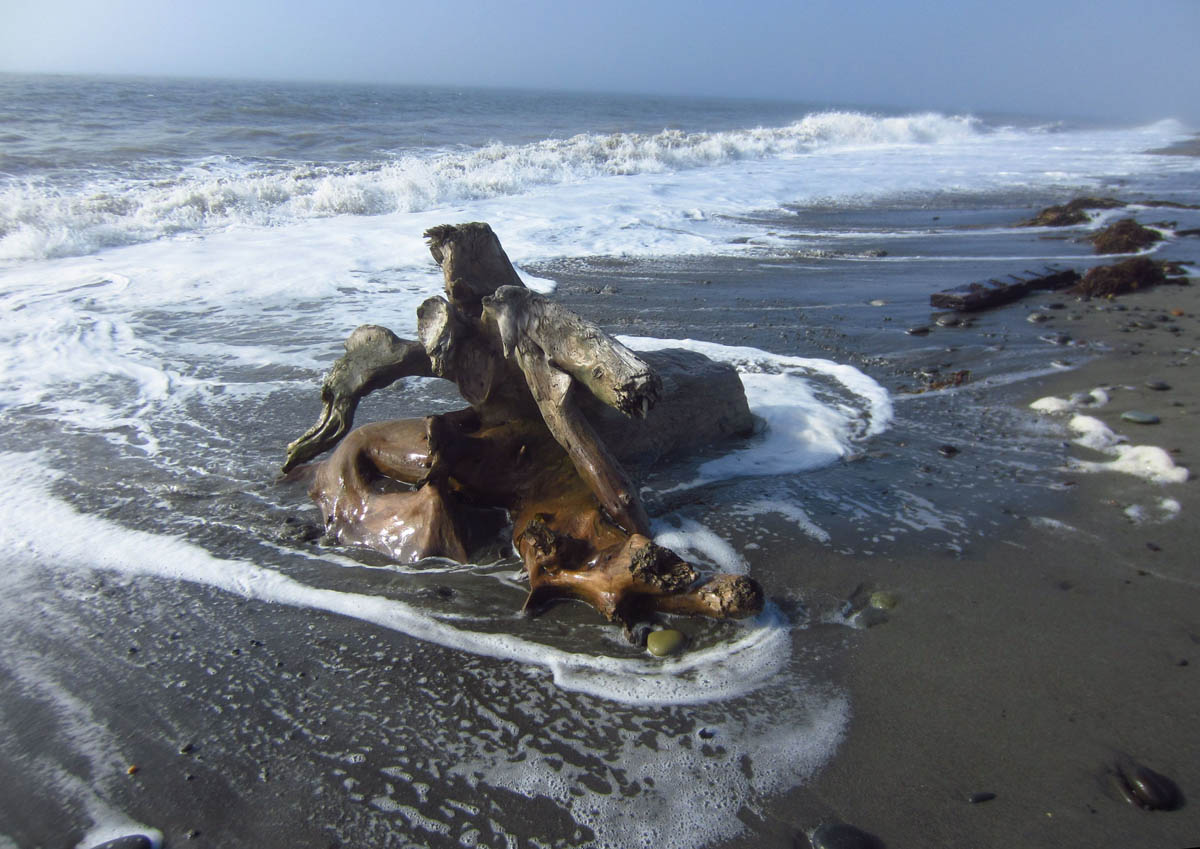 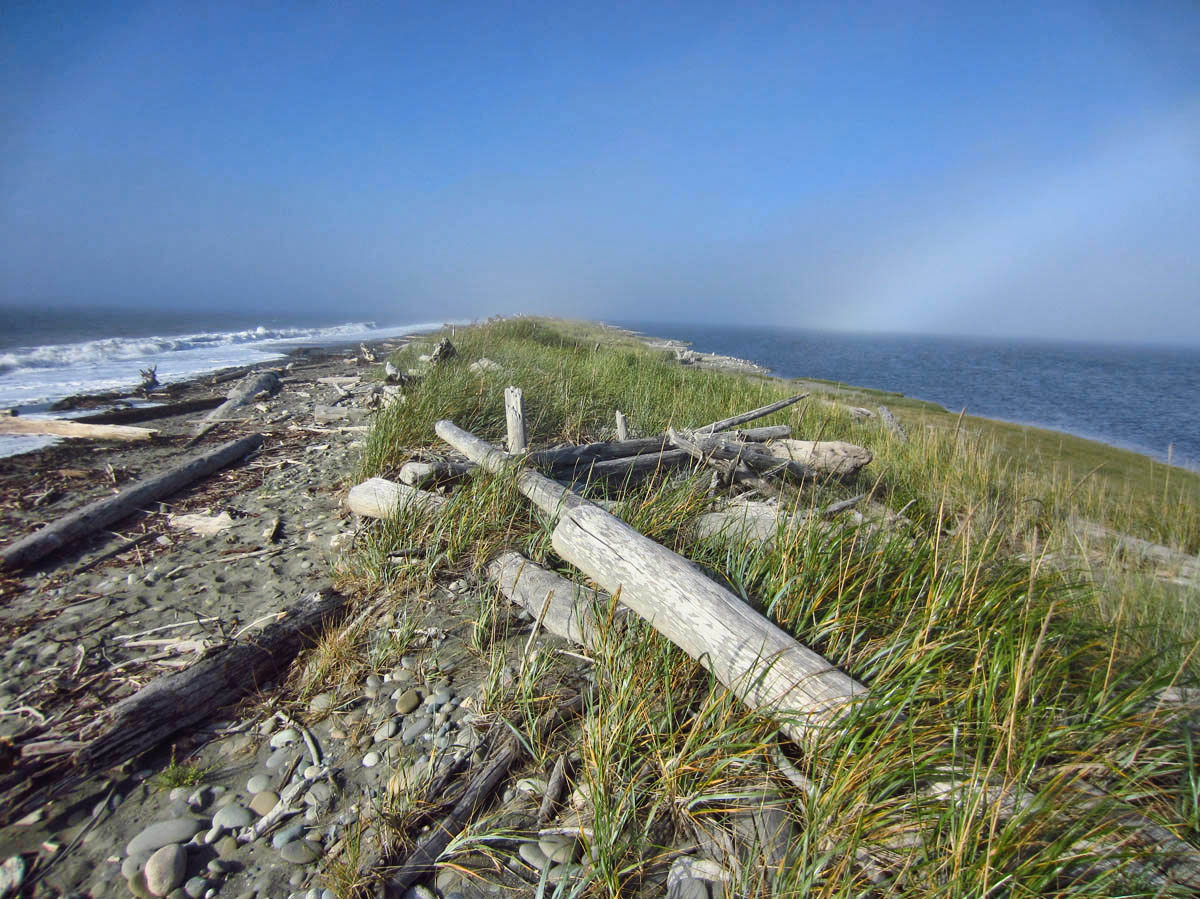 I make plans to take half a day off from work on Thursday and meet Nina and Paul at the kiosk at 11:00am.   Timing is critical.  If I am going to make it, it will have to be on hard-packed sand.   But early Thursday morning as I am starting to pack up, the news comes.  Malaysia Flight 17 has just been shot down.   It is my job responsibility to determine whether my client has any employees on that plane.  I can’t leave until I am sure we are all clear.  I breathe a sigh of relief when my report results come back with no names, which means my part is done except for a few thoughts of respect for the victims and their families.

I grab a change of clothes and shoes, thinking if I have to turn around after a couple of miles, I will drive over to explore Port Angeles.  At least if I can’t make it, my afternoon off will not be a total loss.   I quickly throw together a peanut butter sandwich, and fly out the door.

I race to the end of the path to see Nina waiting.  I apologize profusely for being late, and ask “Where’s Paul?”   Nina tells me he has decided to stay behind with Polly Doggie, as dogs are not allowed on the beach in the National Wildlife Refuge.    Well, on one hand, I am sad, as I had enjoyed our conversations back in Cape Disappointment.  On the other hand, I am now more committed than ever to finishing the hike, since there are only two of us! 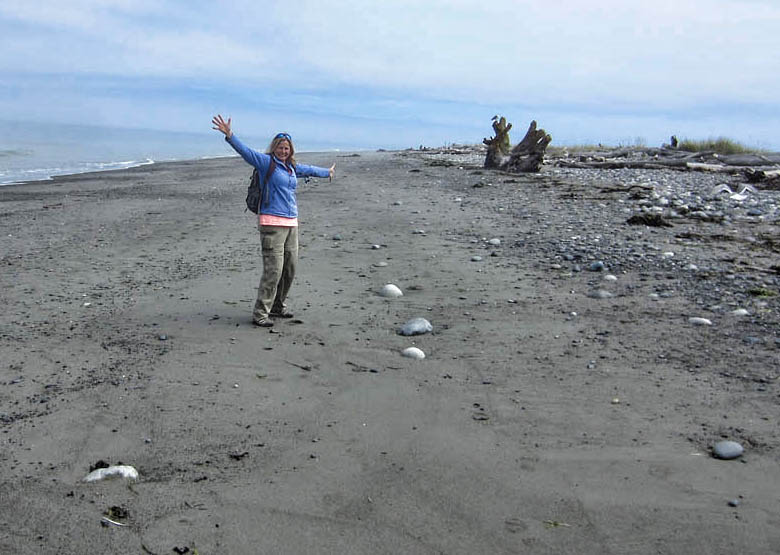 No sight of the light as we begin our hike, though it does not quell our enthusiasm. 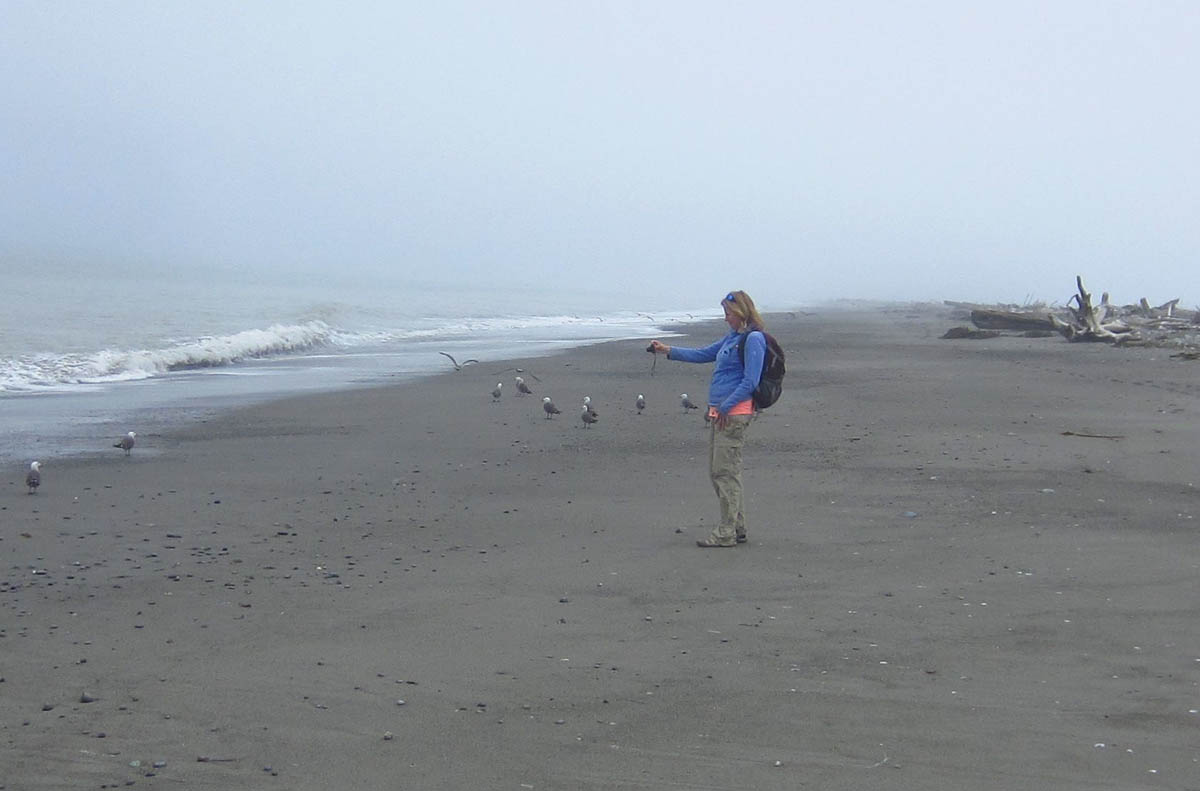 As a long-time fan of Nina’s photography, it is fun to watch the photographer in action.

As we start out, it’s a gray, cloudy day, and the end of the spit is completely obscured by heavy fog.   The Spit narrows as we are flanked on both sides by water – The Strait of Juan de Fuca on one side, Dungeness Bay on the other.  As we get further away from National Wildlife Refuge, there are fewer people, until soon we can’t see anyone in either direction!  It is just the two of us and a few dozen sea gulls, walking along in rapid-fire conversation to match our quick cadence.   Time flies.

Before I know it, Nina observes that we are turning.  We have reached the “elbow” where the spit makes an easterly turn.  The fog is now lifting, and we see patches of blue sky.  We climb up over the tall ridge of driftwood debris to see if we can get a glimpse, and there she is!    We can see the 15 second light flashing.  Between our mutual enthusiasm and constant conversation, I think for the first time, I just might make it! 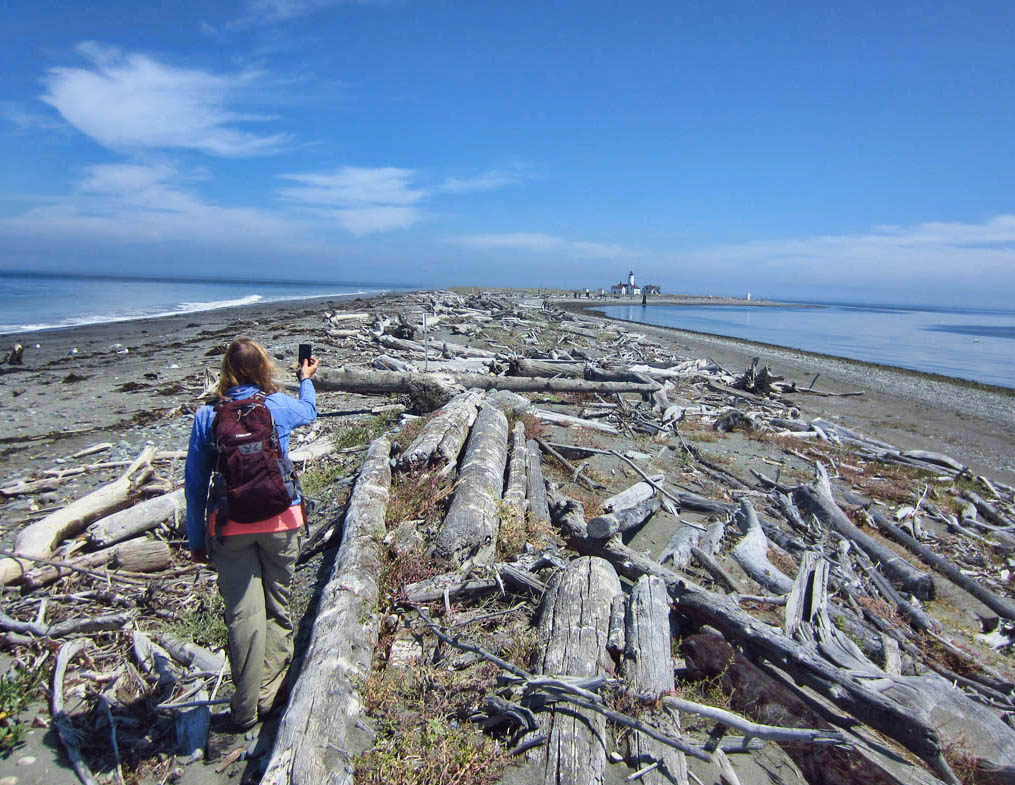 Finally, we have her in our sights! 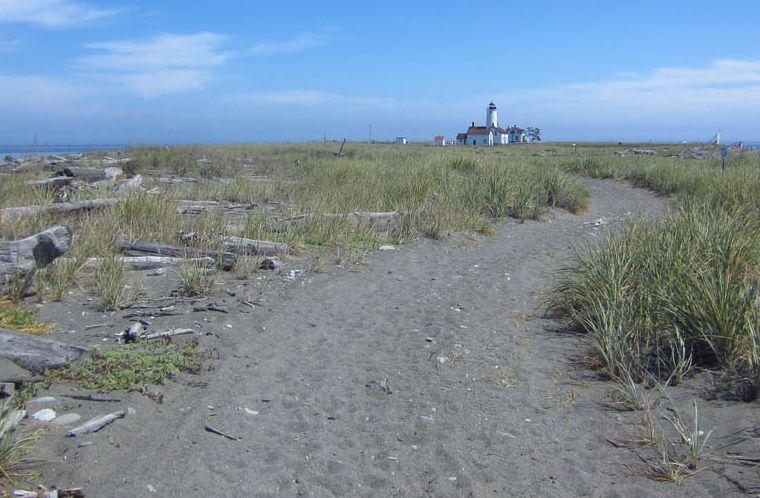 Loose sand makes it harder to get traction.

By now, the clouds are almost gone, and the sky is brilliant blue.  The Strait is calm and inviting.   The lighthouse still eludes us though, as our pace quickens up the path through the loose sand, and making time gets harder.   It is a bit like a mirage….not as close as it appears. 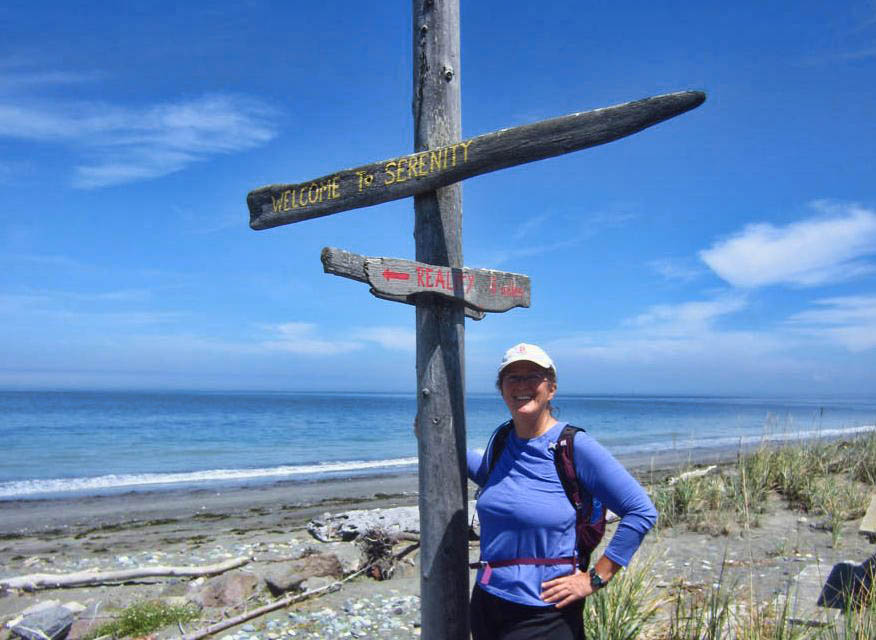 Please don’t send me back to “Reality” just yet! 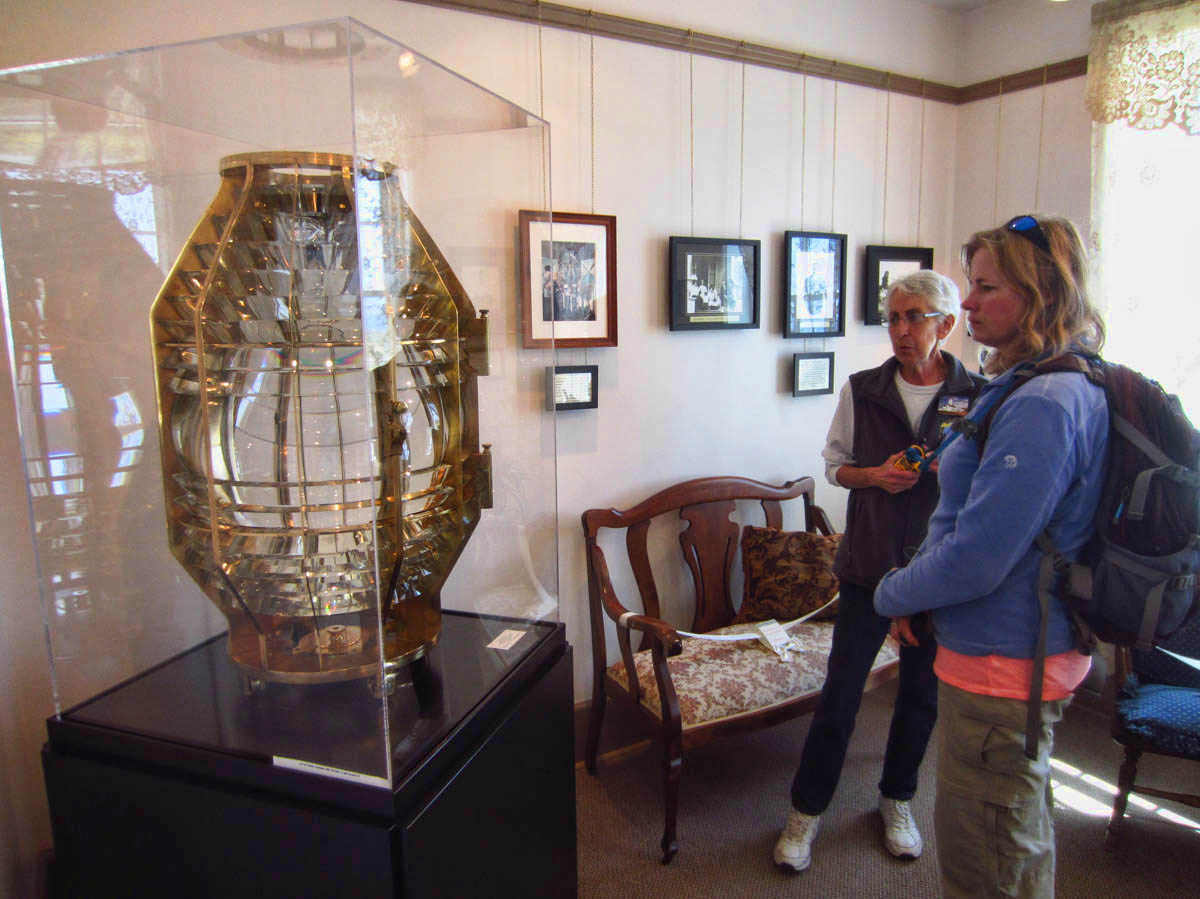 Nina and our Lighthouse Host, also a member of the Board, “talk Fresnel” 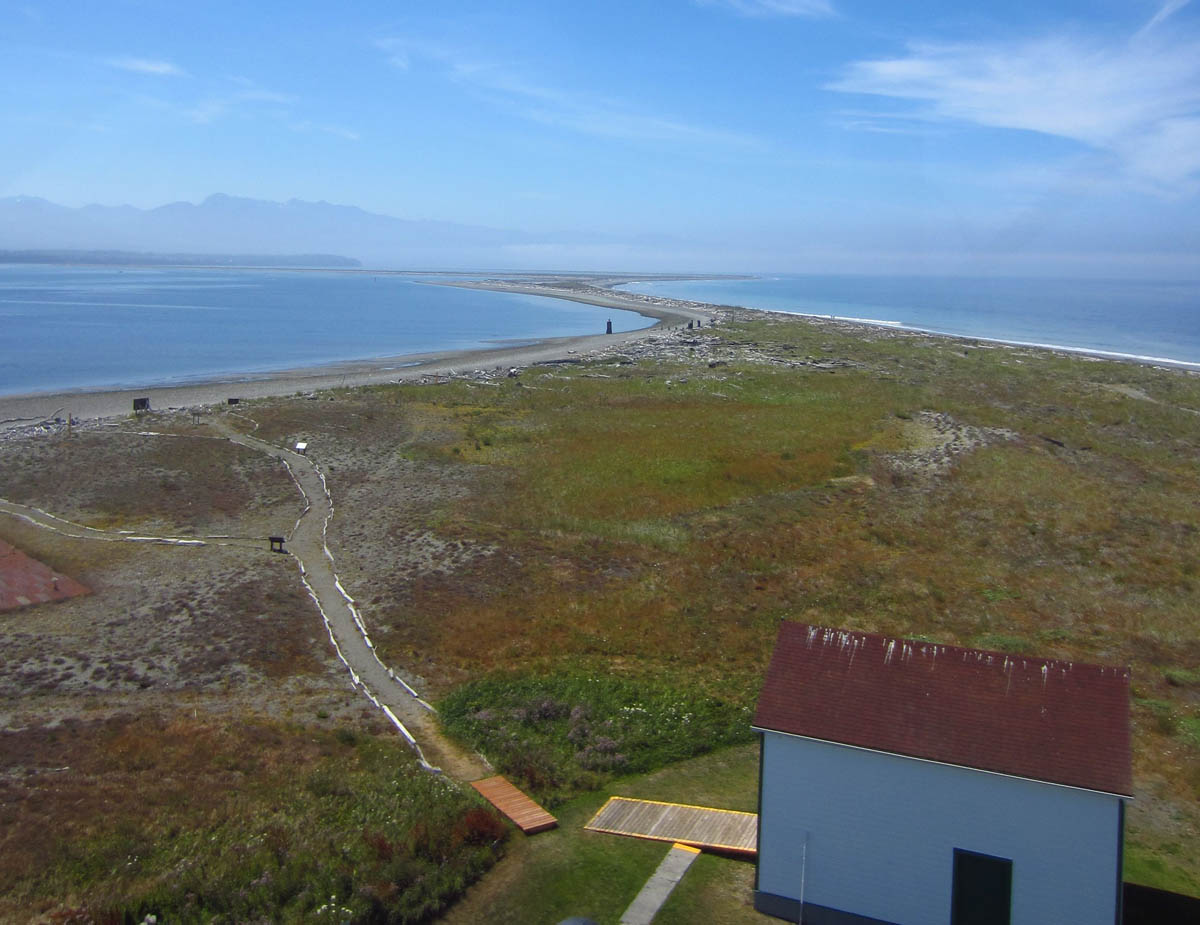 View of the narrow Spit from the lantern room.

Finally, we arrive at the lighthouse, and I am feeling surprisingly good for having just walked five and a half miles! I am trying not to think of it as eleven miles, but rather two 5.5 mile hikes with lunch in between. 😉

BEST peanut butter and jam sandwich I have had in a long time! 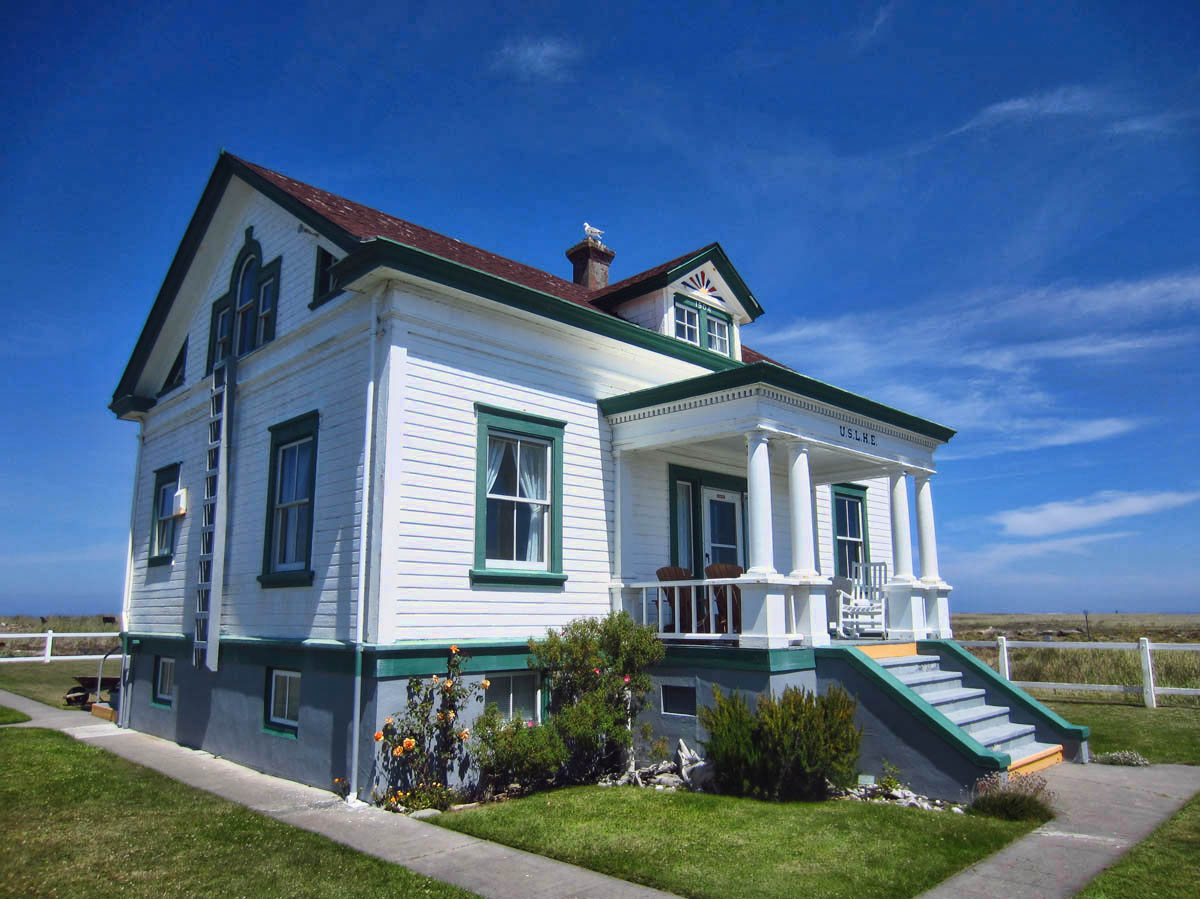 Keepers quarters where volunteers pay $350 a week for a room…tempting. 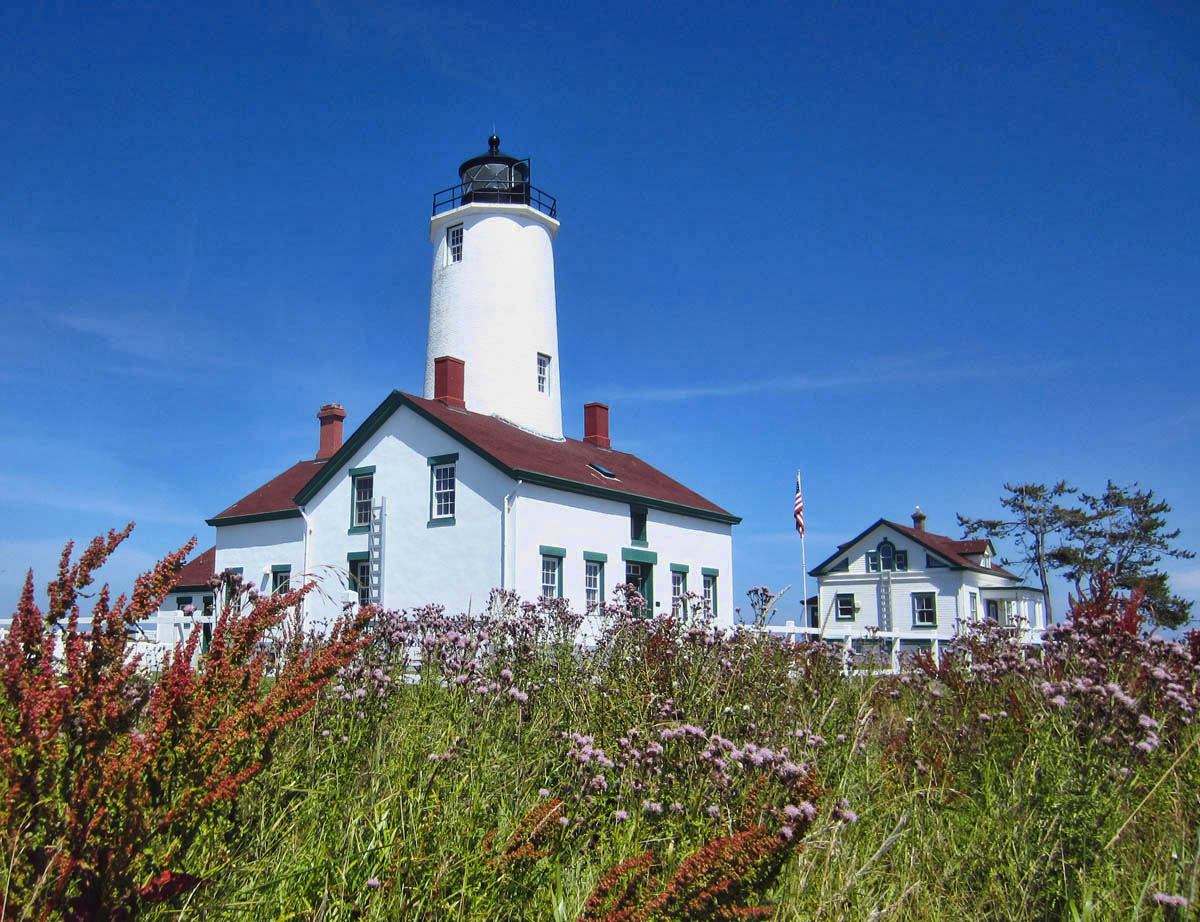 We waste no time in the climb!  Then enjoy a leisurely picnic table lunch in the sun, before making the 5.5 mile return.  Fortunately, the conversation is just as engaging on the return, and we are back in the heavily forested Nature Reserve before I know it.  I am thrilled at having made the lighthouse, though I must confess, once back in my rig, my eyelids set long before the sun… 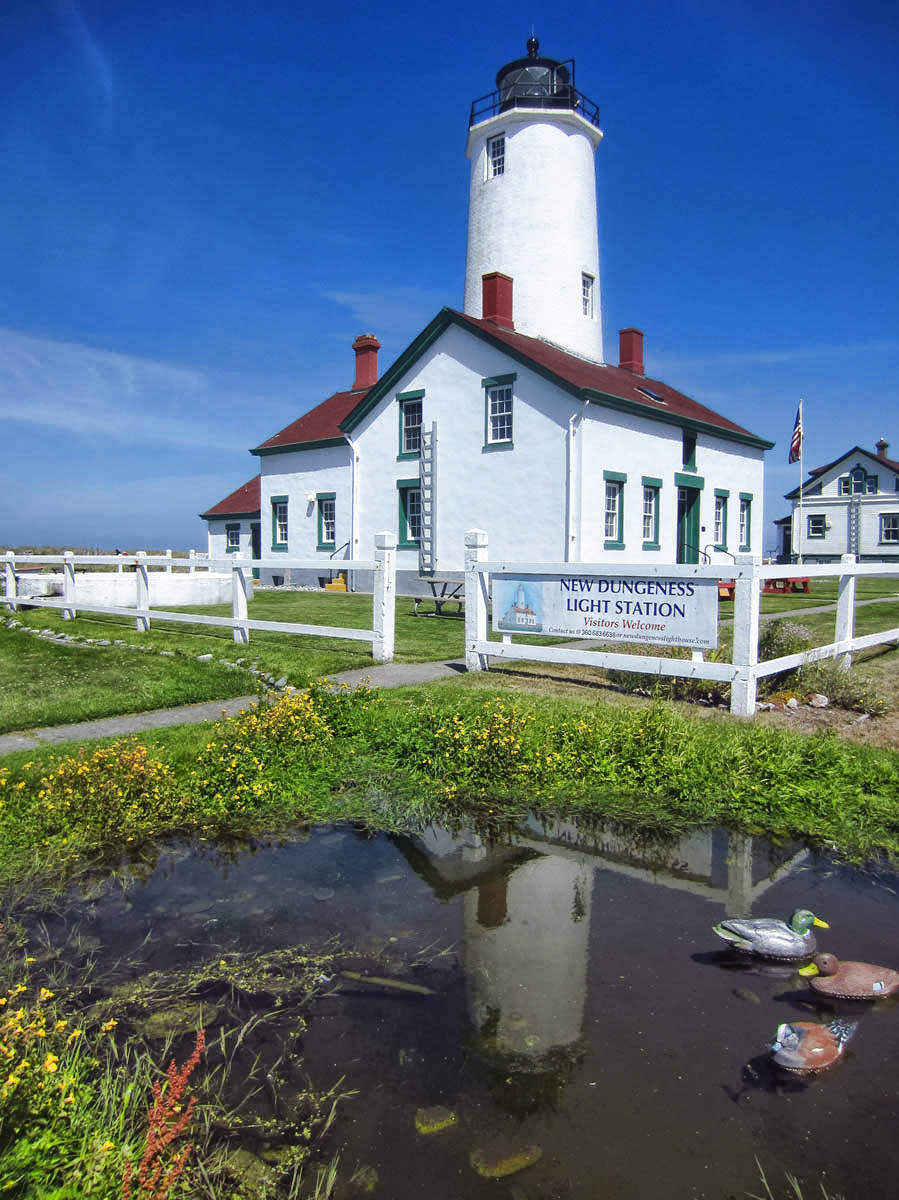 It is such fun to tour a lighthouse with a fellow “Lighthouse Nut!”

My thanks to my friend Nina, without whos enthusiasm I would nave never had the tenacity for the eleven mile hike to see another beauty in the lineage of lighthouses! 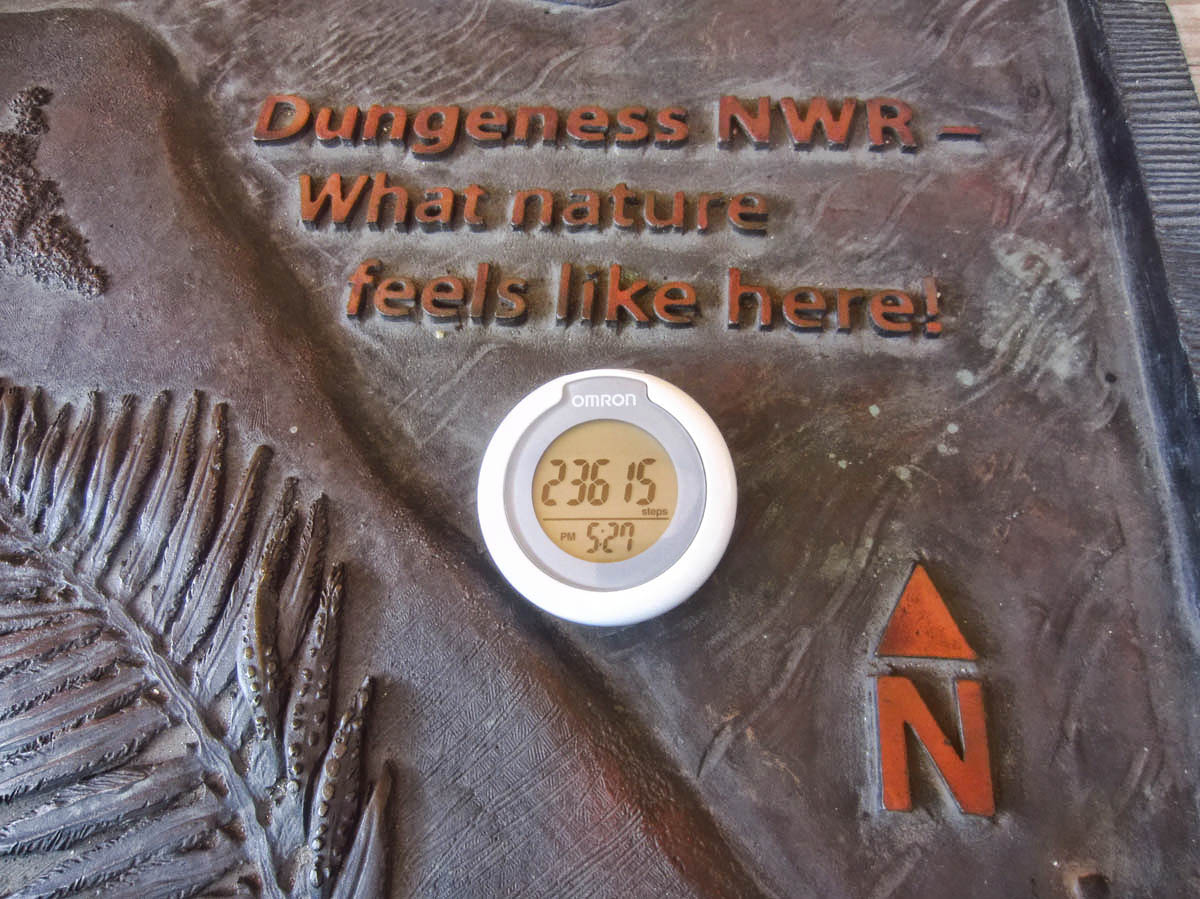