What do you do when you arrive in Glacier National Park on a sunny day?   You drop everything and head straight for the “Going-to-the-Sun” Road!   Weather is fickle here in the park, and if you should get a sunny day, take every advantage!

The Going-to-the-Sun Road is a 50 mile stretch of two-lane that runs east to west, right through the heart of Glacier National Park.  In fact, the Going To The Sun Road is the only way you can access the park by automobile.  And not just any automobile.   You must be under 21 ft in length and 8 ft in width (including mirrors) and 10 ft in height (due to rock overhangs.)  The road is so narrow in places, I took my bike off the bike rack for fear I lose the rear tire! 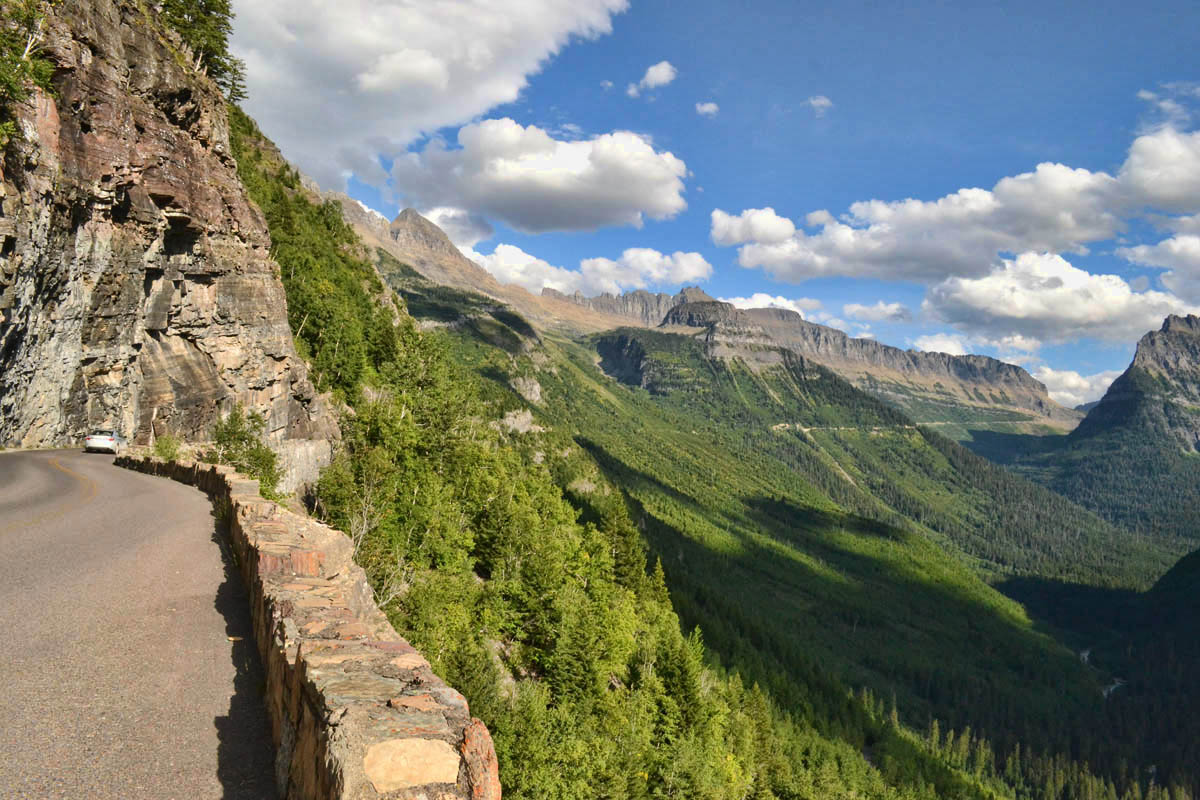 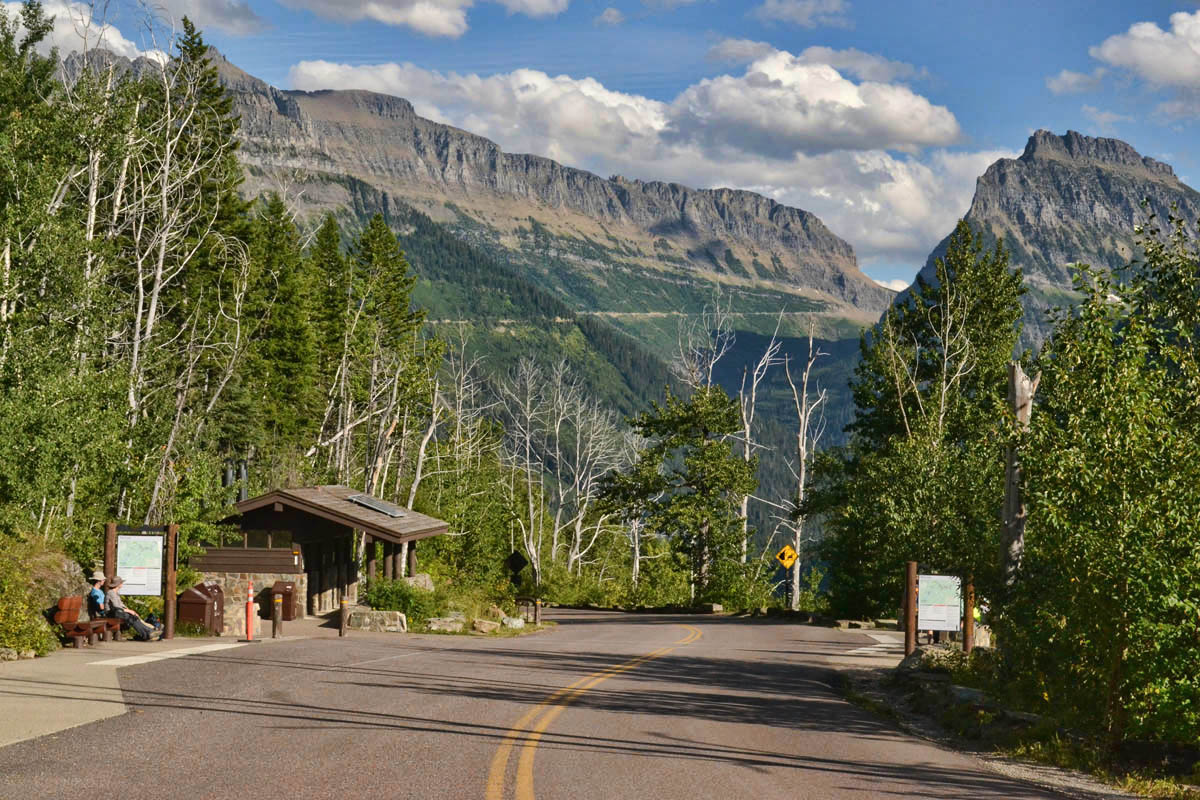 Shuttle stop near “The Loop” where road doubles back 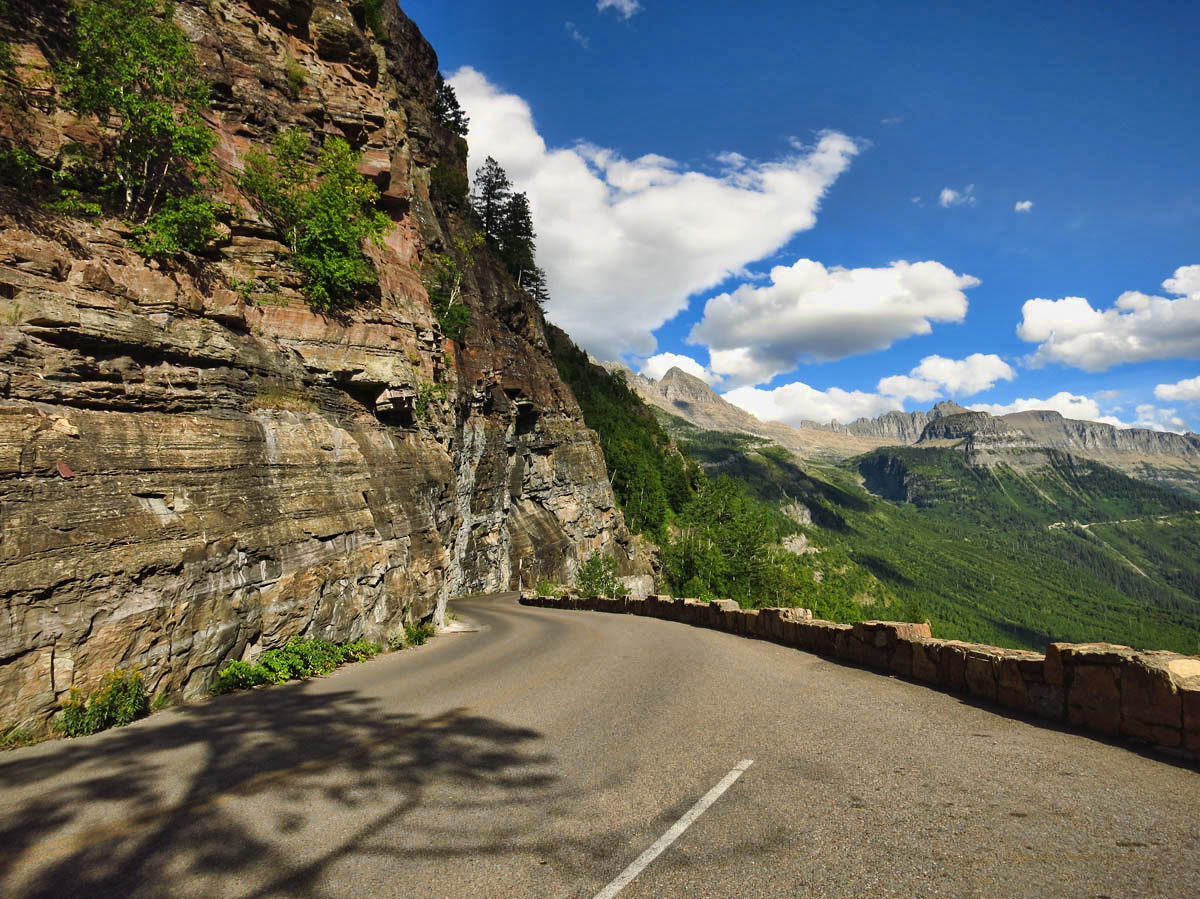 Built in 1932, the road runs from lake to lake, starting out at Lake McDonald on the west, crossing Logan Pass, the Continental Divide at  6,646 ft, ending at Saint Mary’s Lake on the east side.

There is a shuttle service that will take you the length of the road.  It operates through 7th September.   But at the risk of being environmentally incorrect just this once, I want to drive it!   Reducing my carbon footprint negates all the fun of having a convertible, short wheel base car on what is known as one of the most thrilling drives in our nation!   I will find other ways to “reduce, reuse, and recycle.” 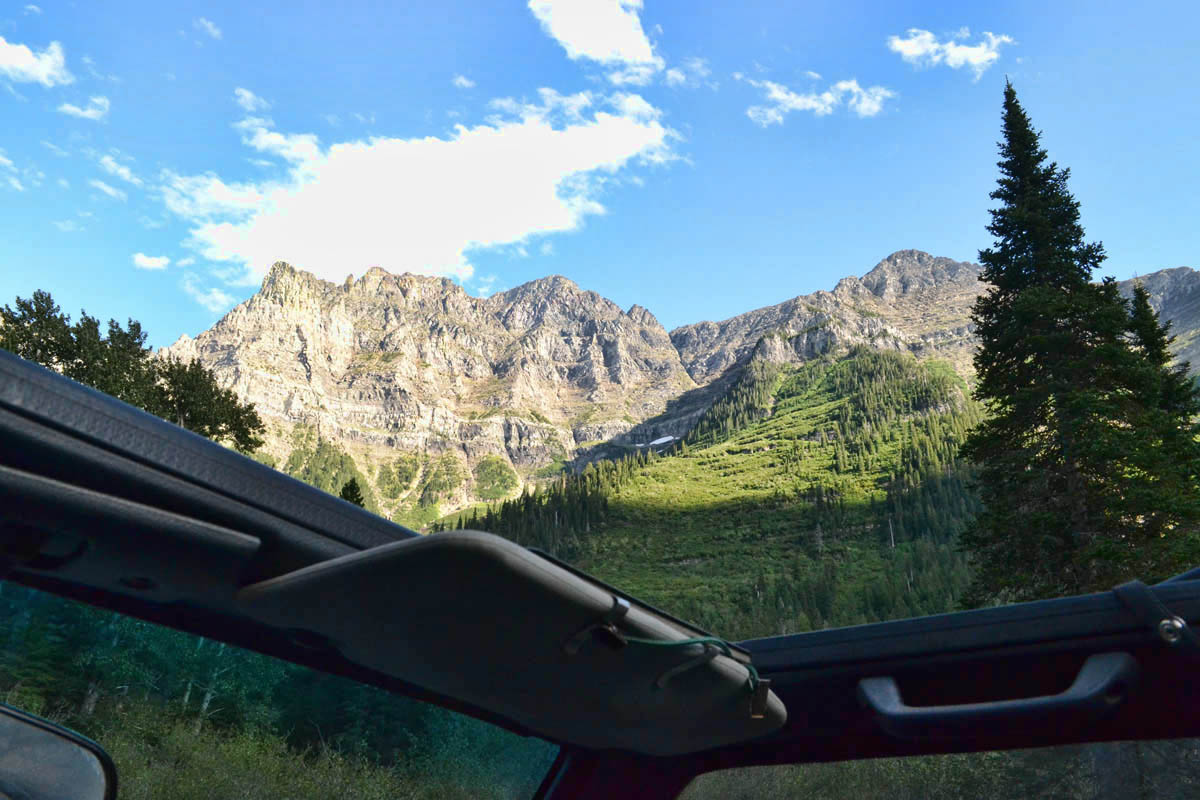 View from my hole in the roof 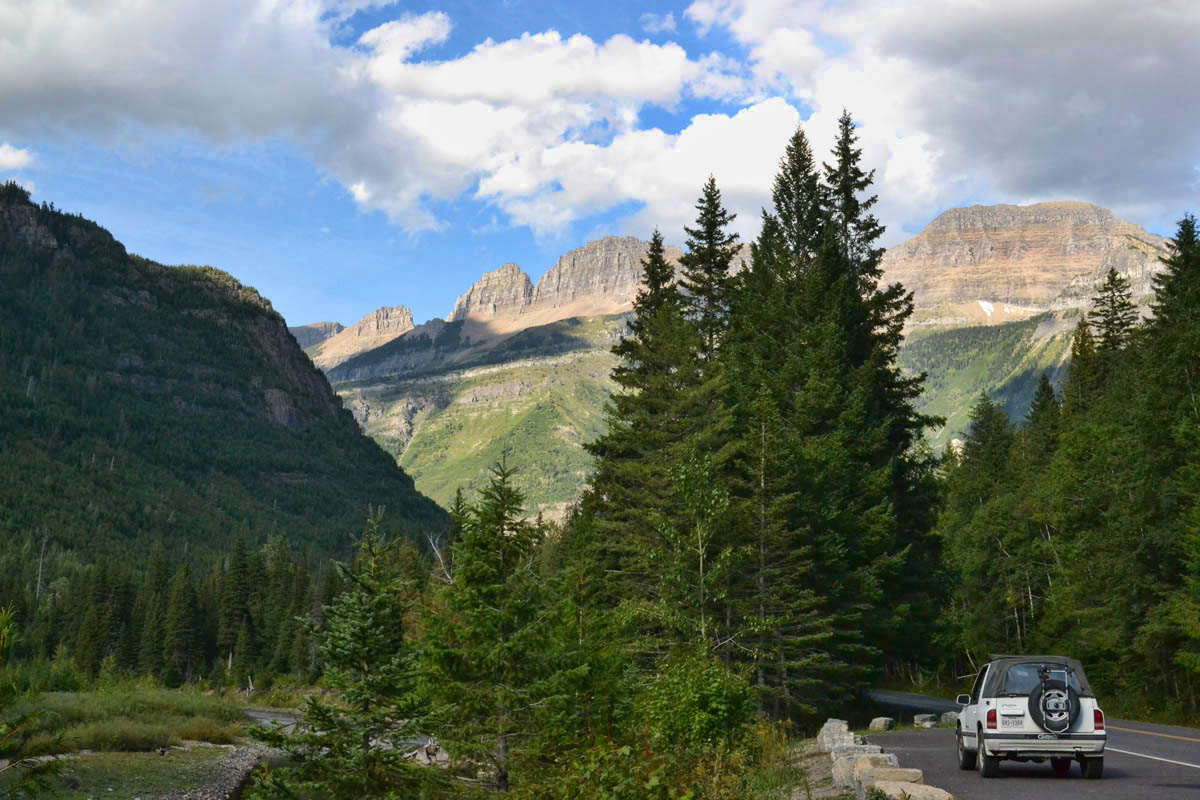 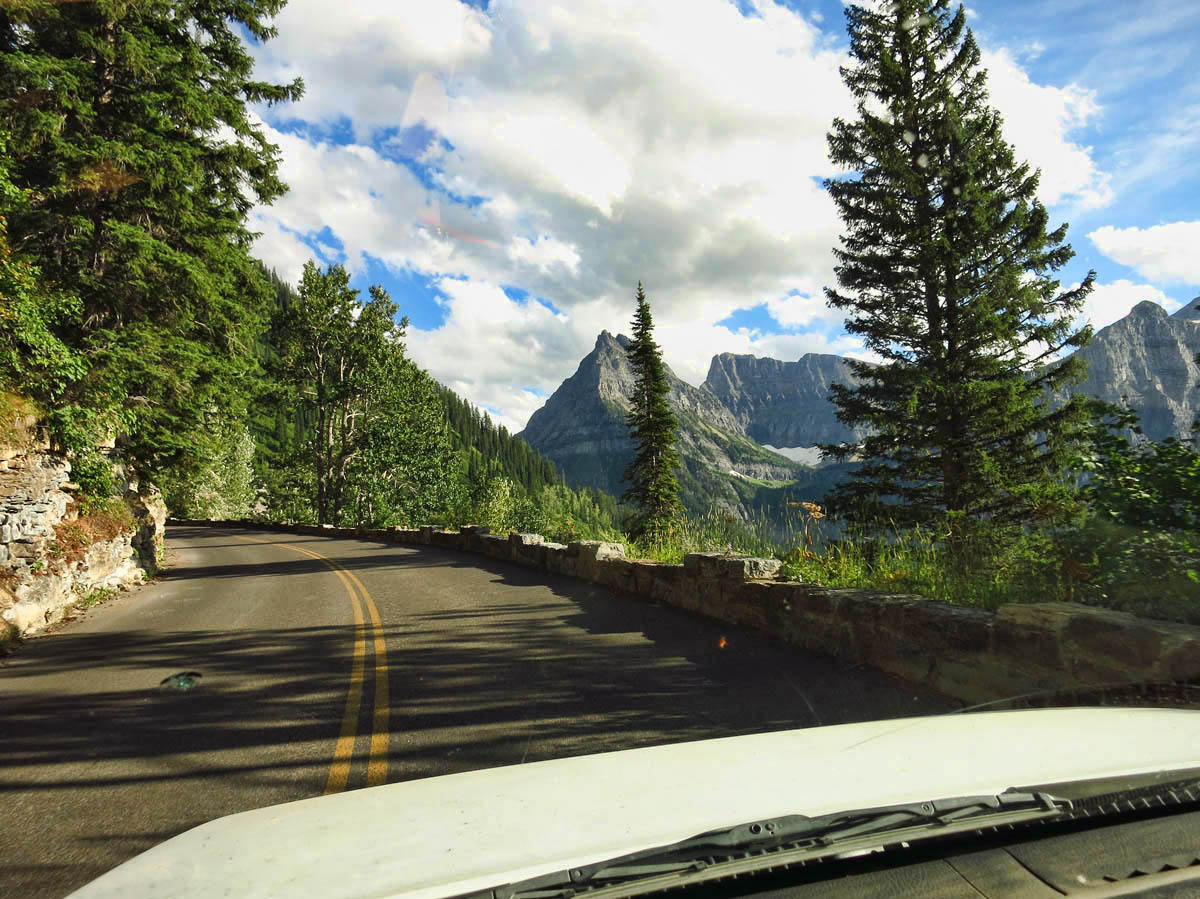 The road begins near Apgar Village and Campground, which is where I happen to be parked for the first half of my vacation.   Apgar Village is right at the foot of Lake McDonald, the largest lake in the park.  The first section of road follows right along the 10 mile shoreline. 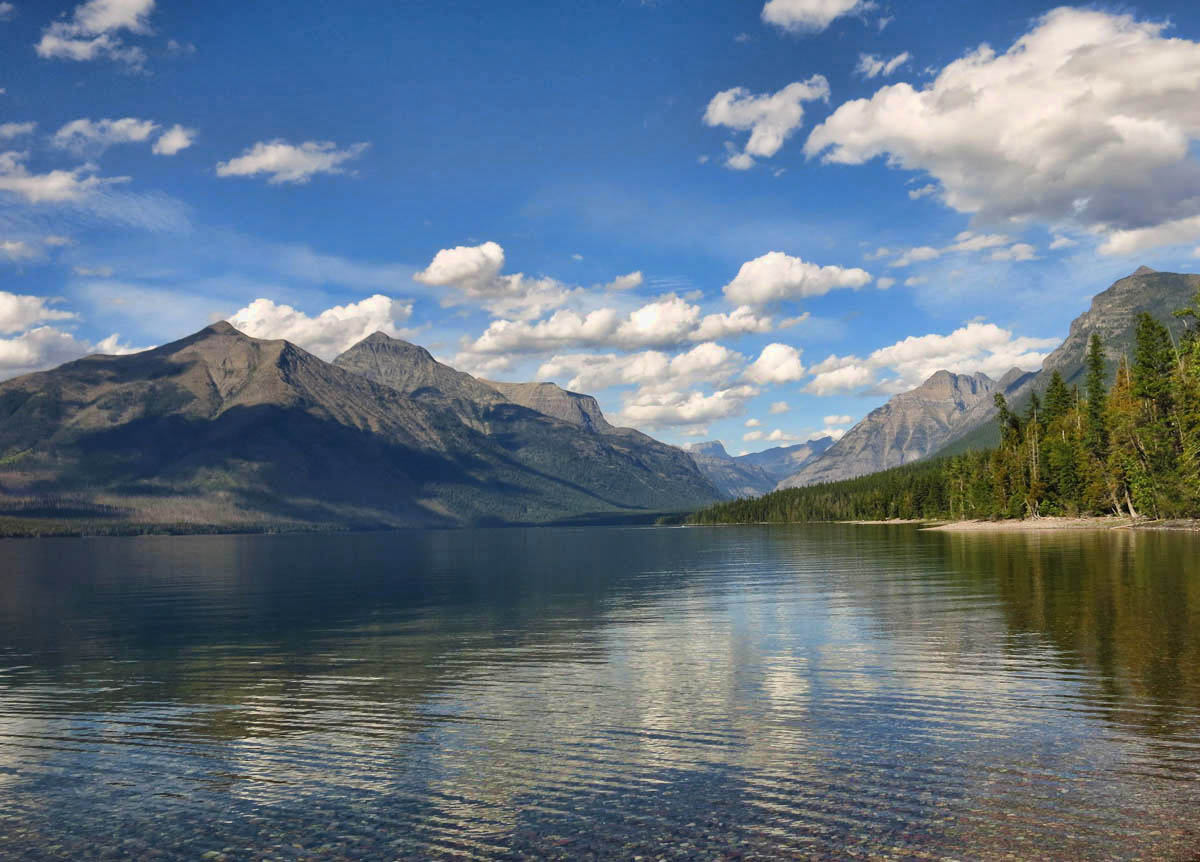 Beautiful Lake McDonald, largest lake in the park, so inviting! 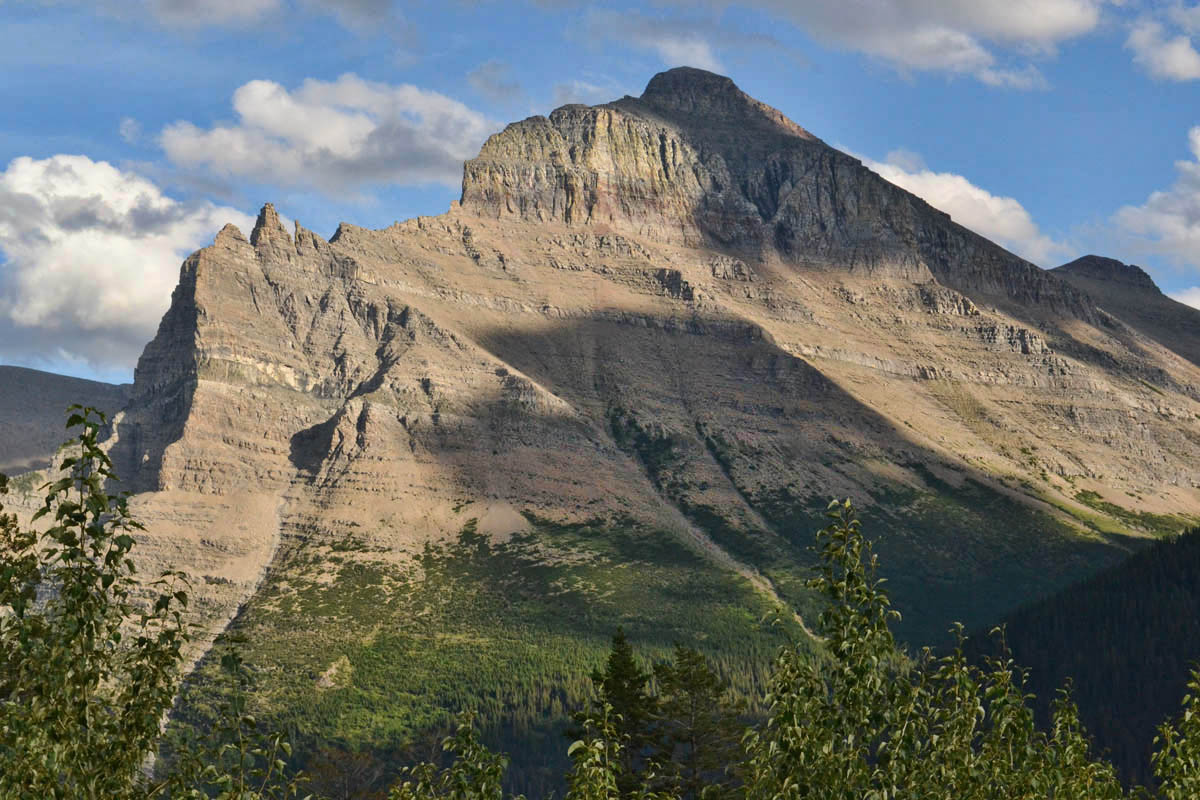 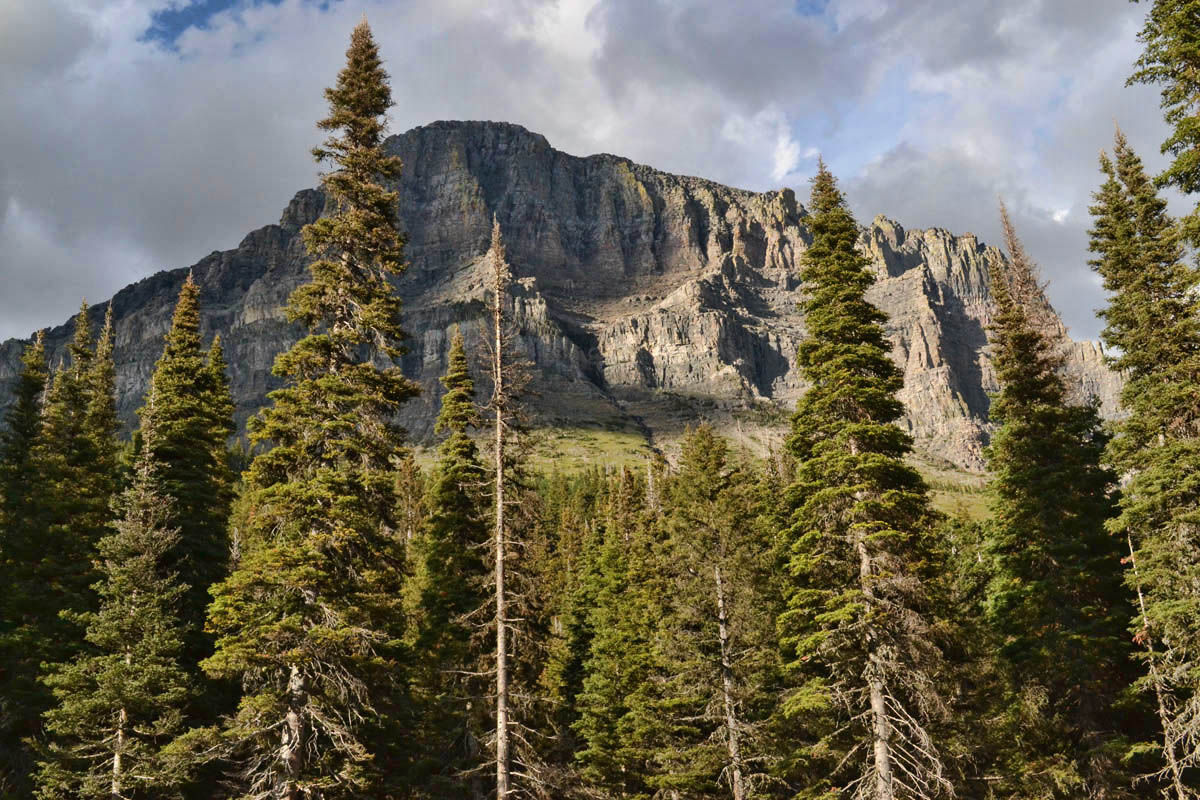 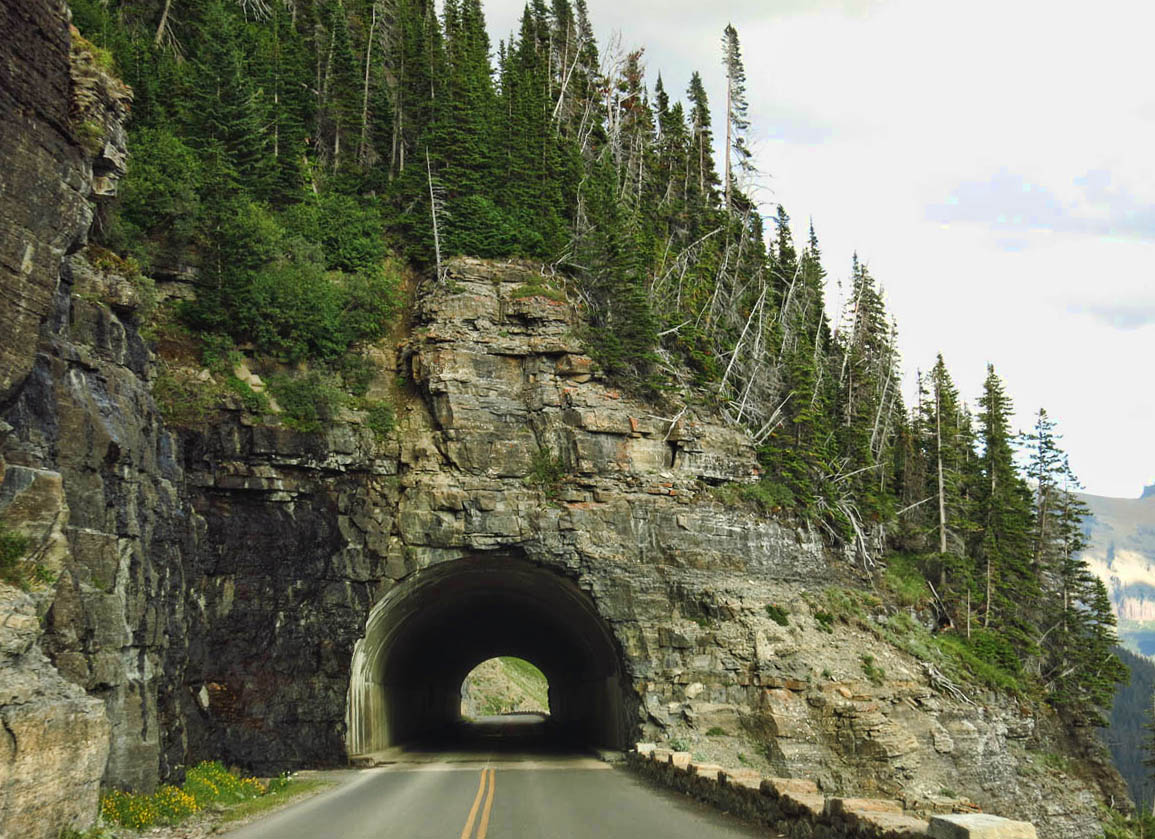 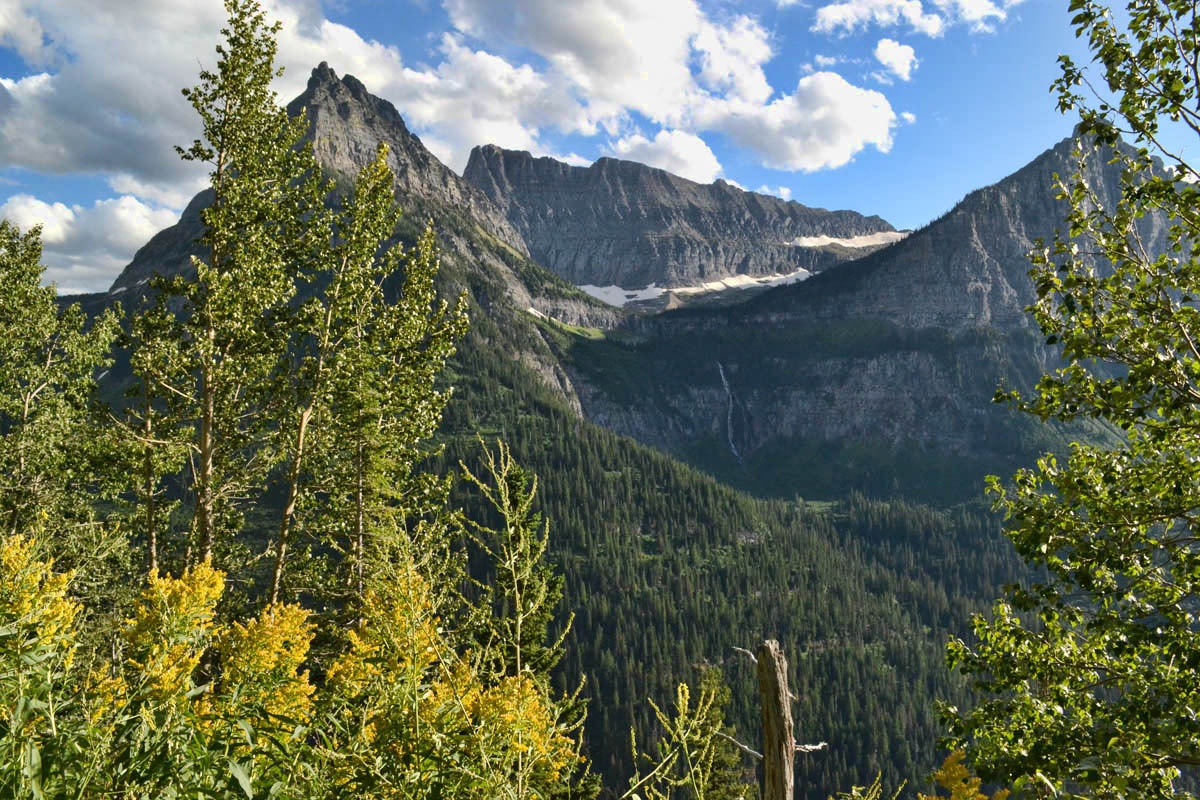 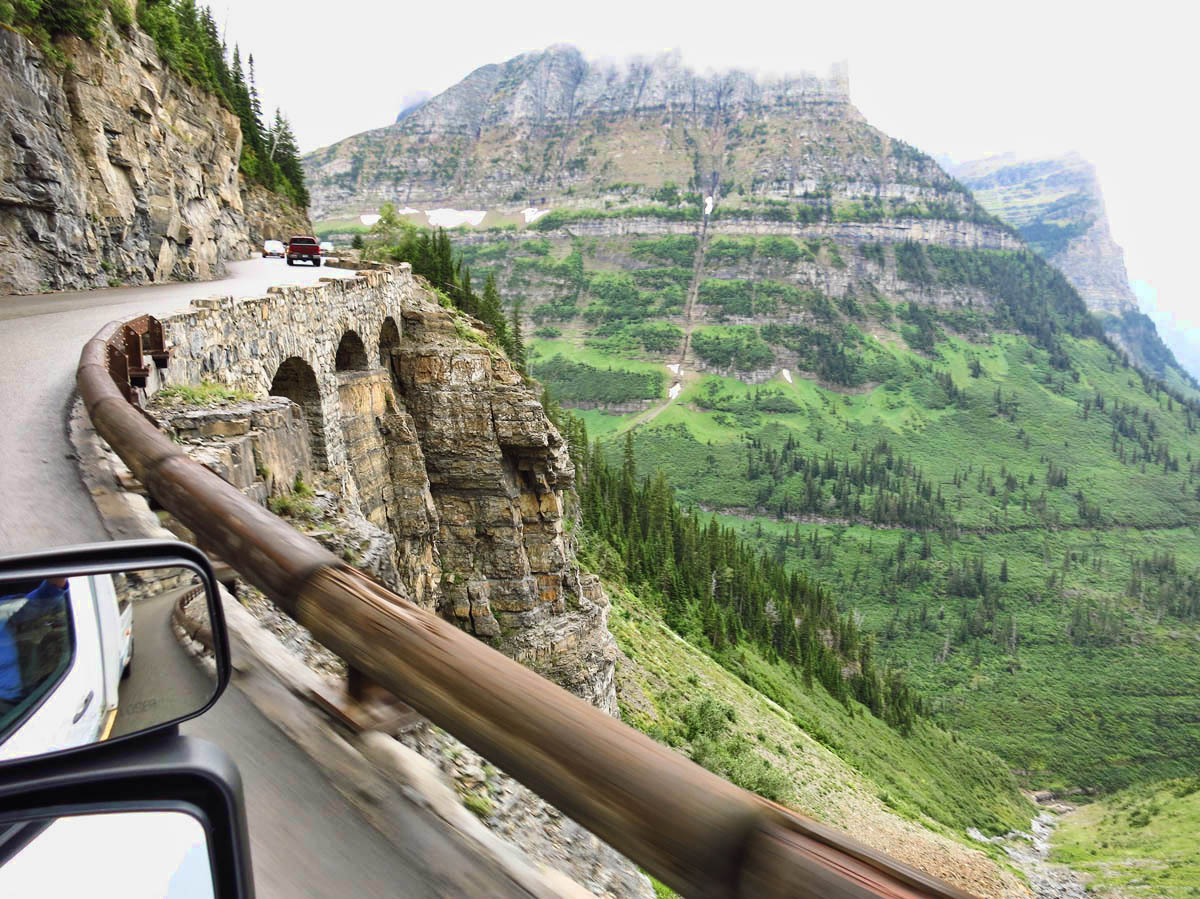 The Triple Arches, “engineering marvel,” according to NPS brochure

The road tops out at Logan Pass, the Continental Divide, at 6,646 feet…but not just any ole Continental Divide.  This is one of the “triple points” where two continental divides meet, giving Glacier Park the designation as “The Crown of the Continent.”  Water not only drains toward the Atlantic and the Pacific Ocean, but to the Arctic Ocean via Hudson Bay as well. 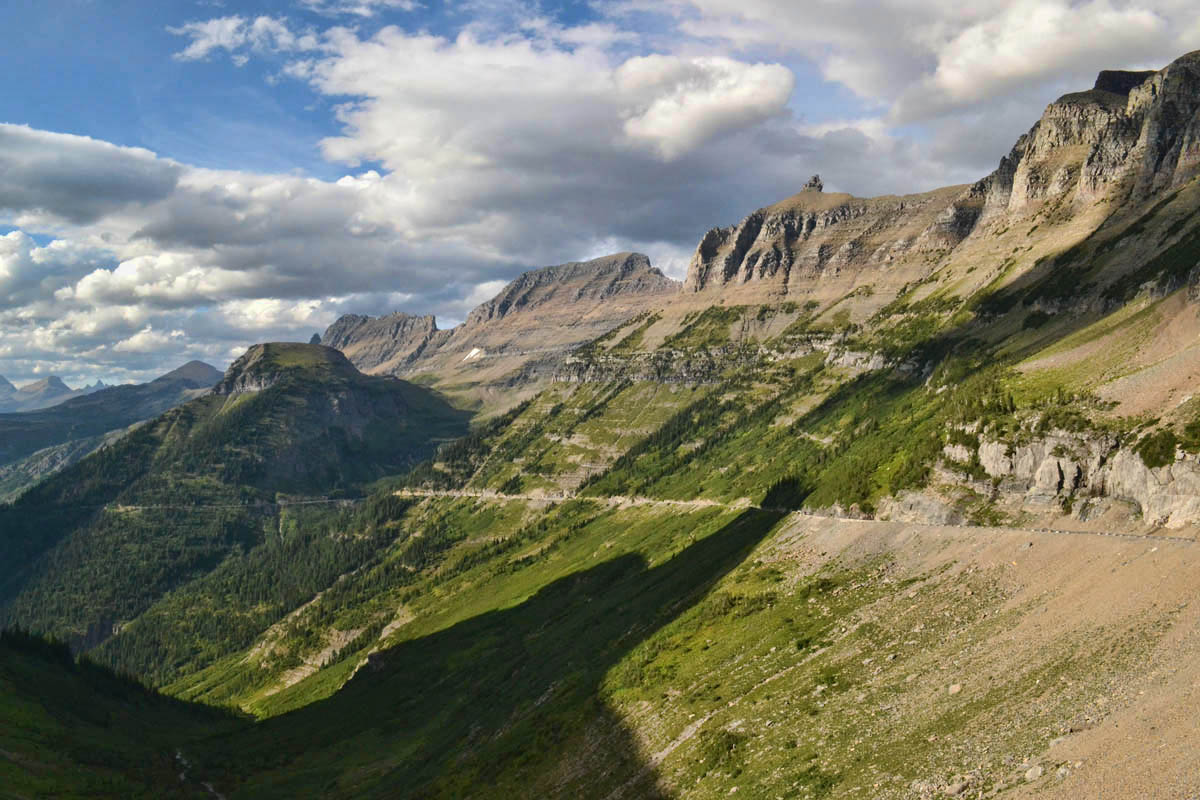 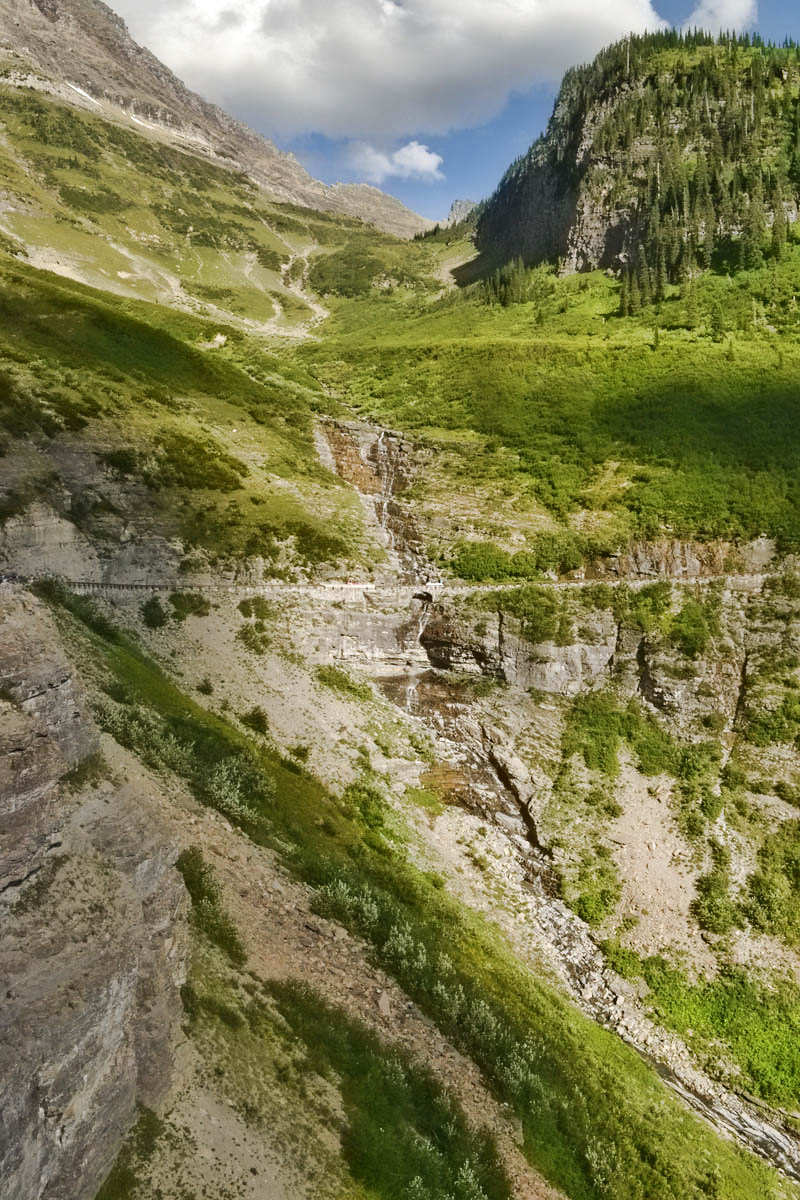 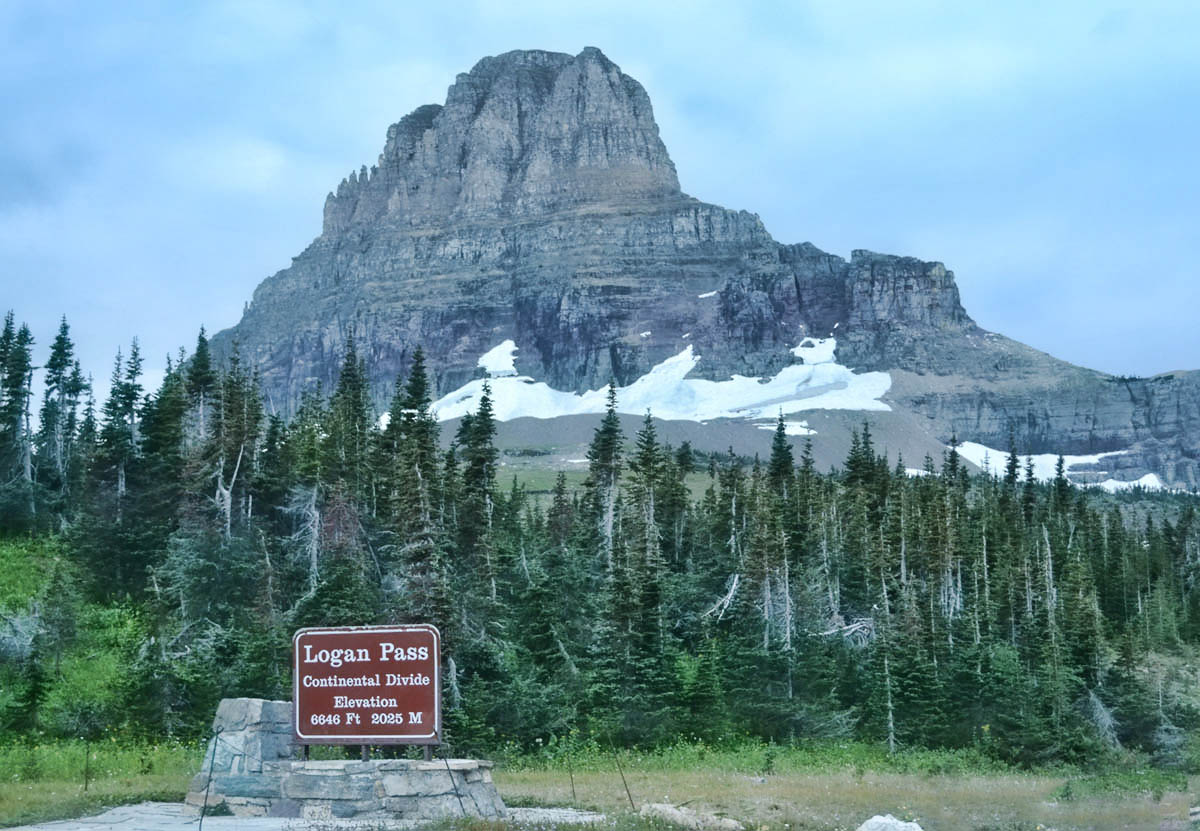 On the eastern side of the road, it is possible to see Jackson Glacier, the 7th largest of the 24 remaining glaciers in the park.   One can view both Jackson and Blackfoot Glaciers from the Jackson Glacier overlook, once one glacier, but now separate. 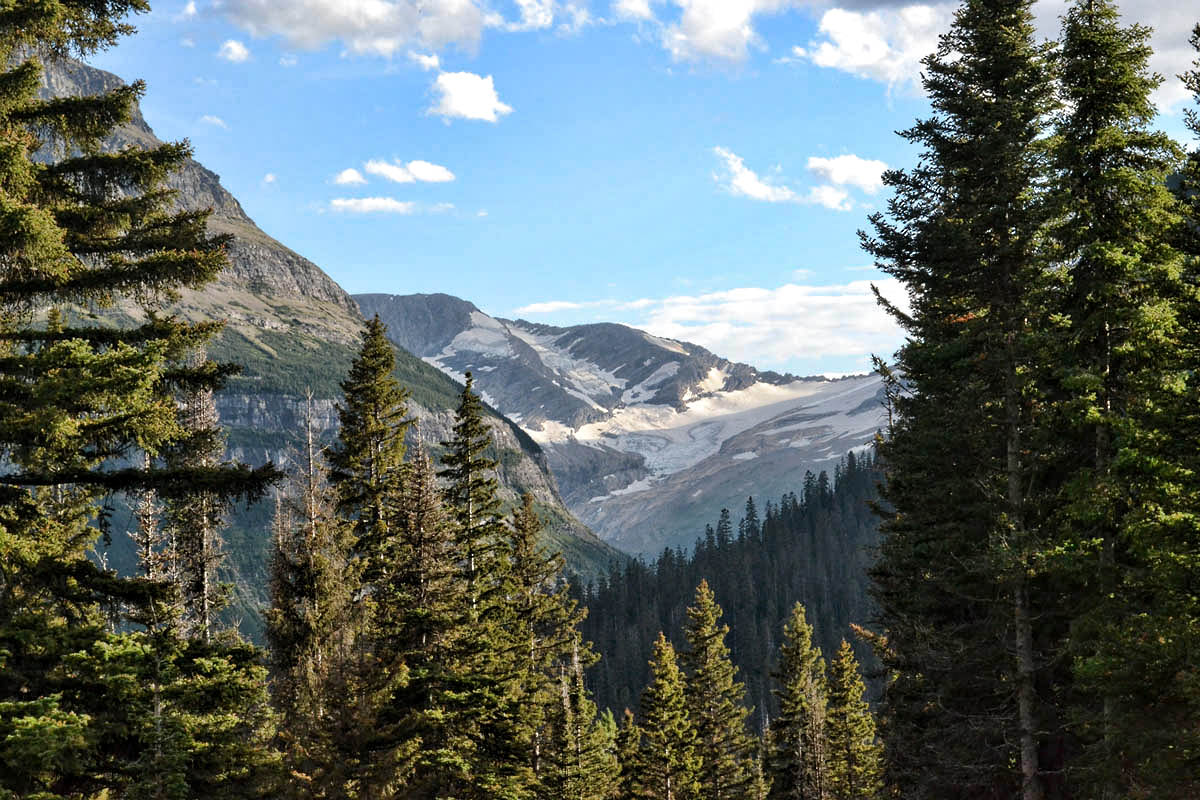 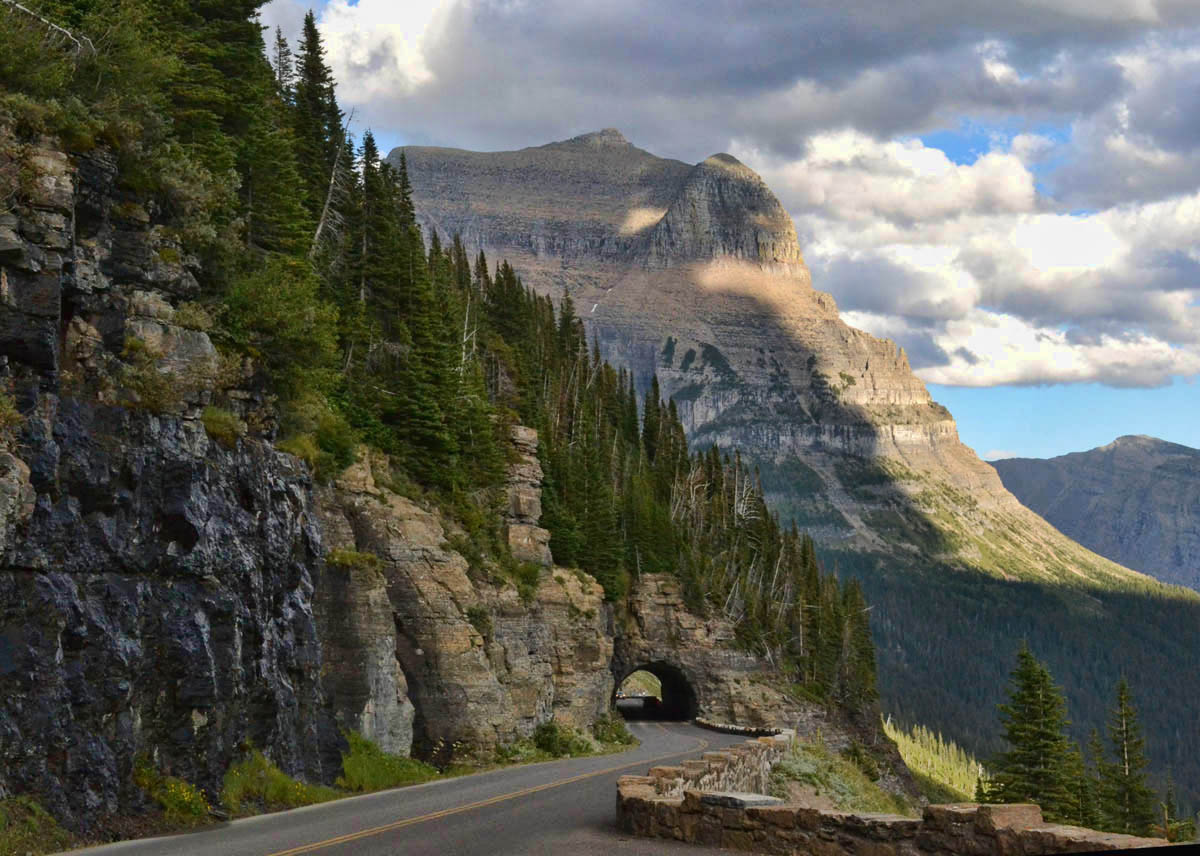 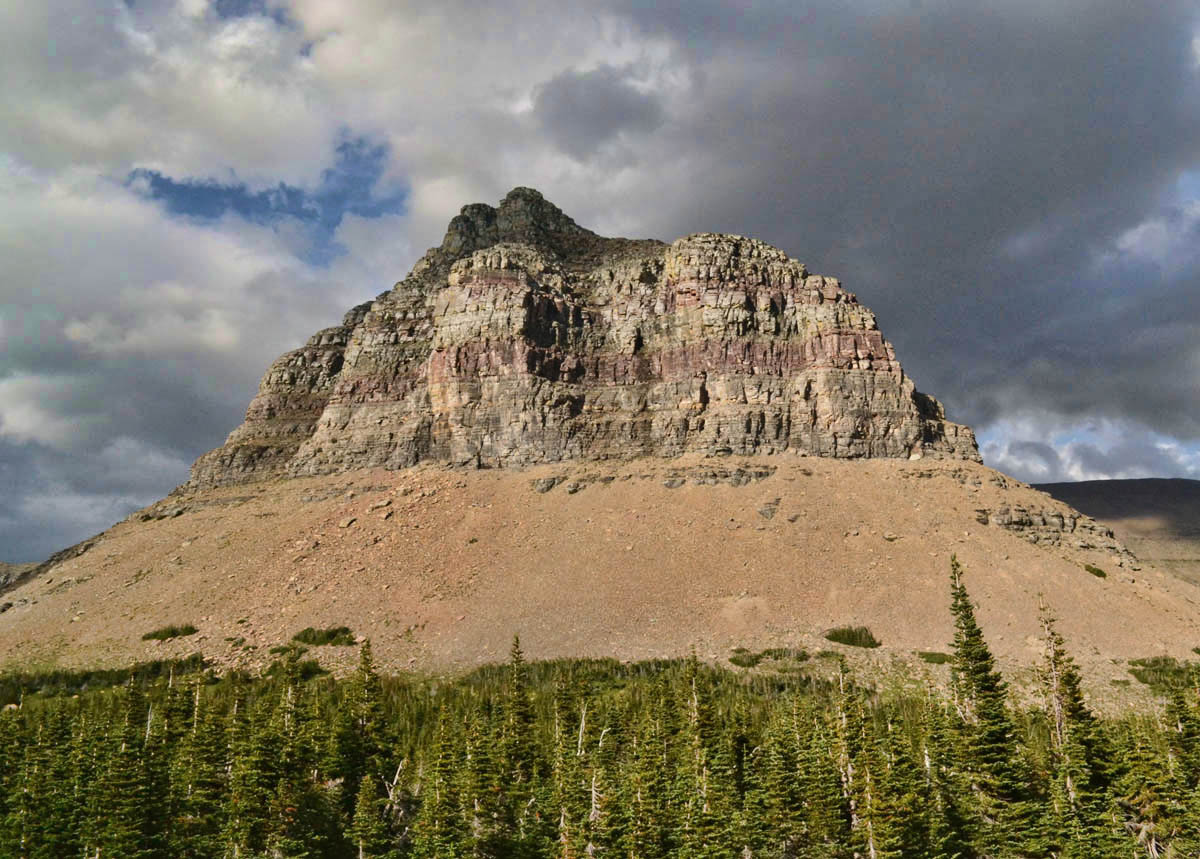 The road levels out on approach to St. Mary’s Lake.   Slightly shorter than Lake McDonald at 9.9 miles, it is location to the scenic little Wild Goose Island.   The lake was also featured in the opening scene of the movie, “The Shining,” as Jack Torrence (Jack Nicholson) makes his way up the road to the Overlook Hotel. 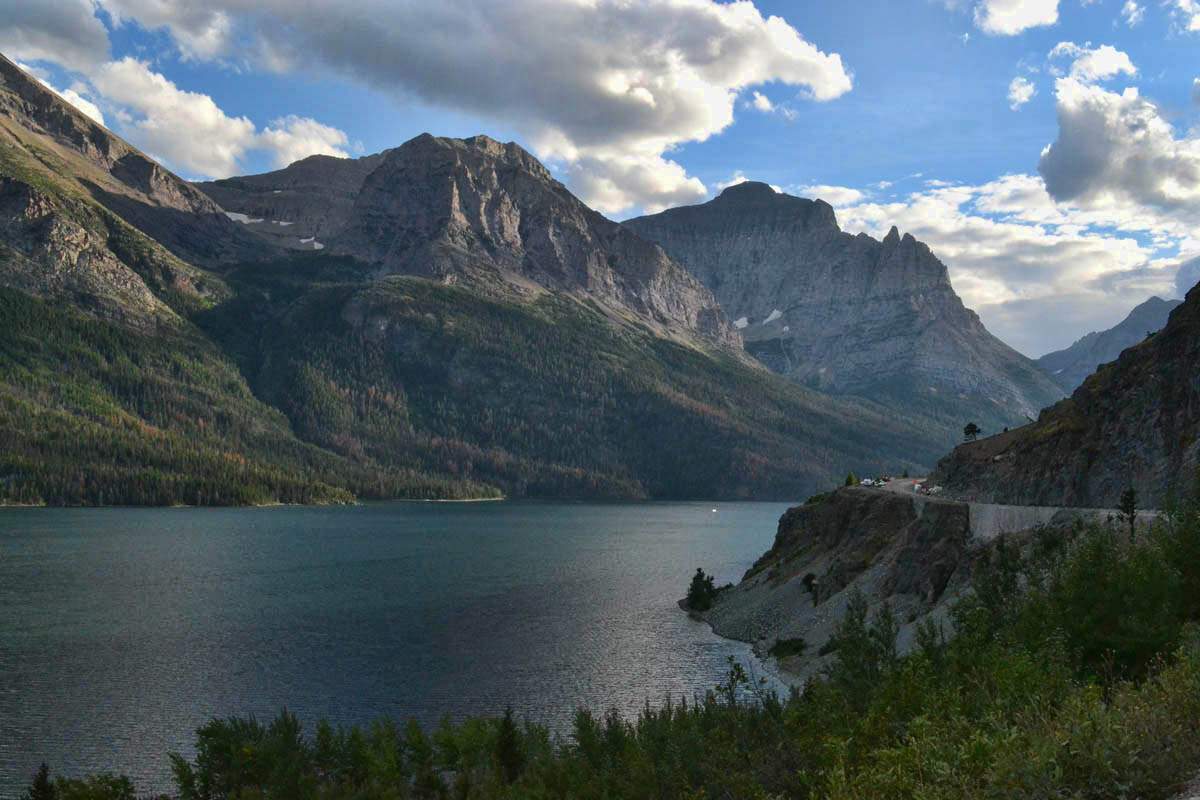 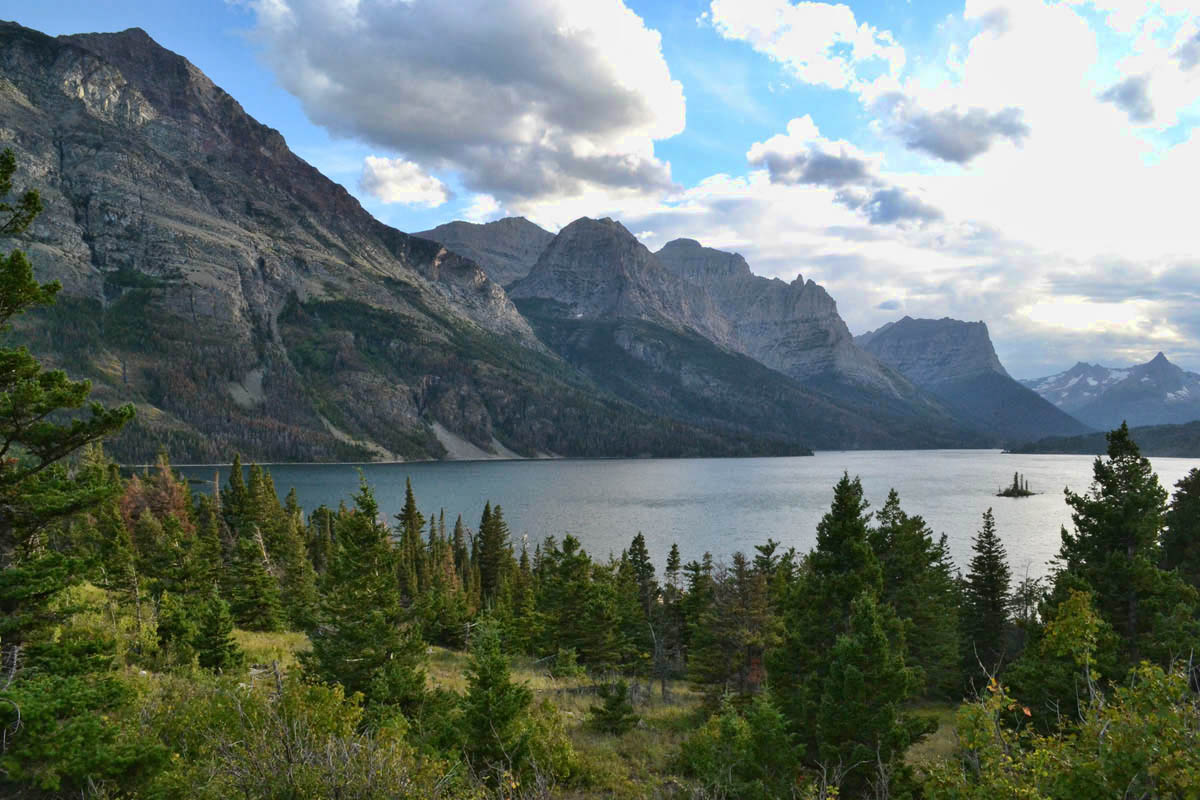 Beautiful St Mary’s Lake, second largest in the park, but only by less than 0.1 mile 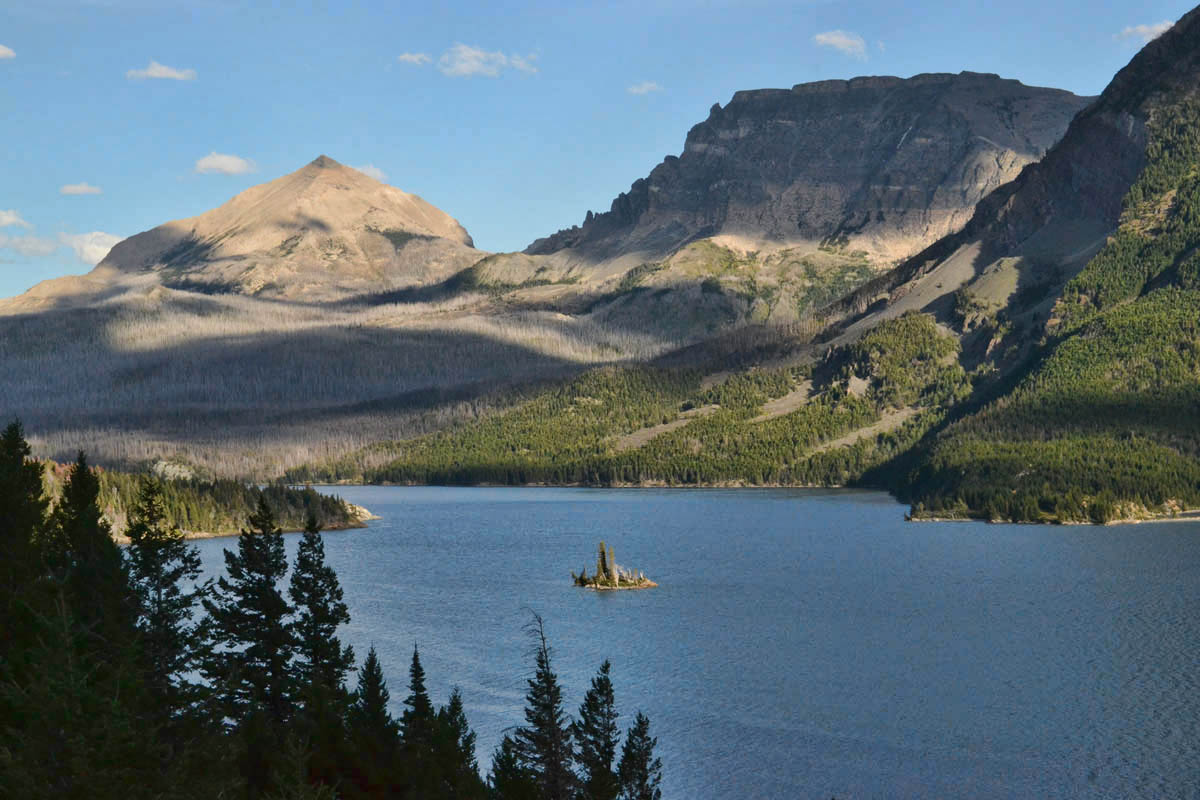 During the winter, the road accumulates up to 80 feet in snow, making it one of the most difficult roads in the nation to clear.  It takes an average of 10 weeks to plow.  There are very few guardrails, because winter avalanches repeatedly destroy the barriers. 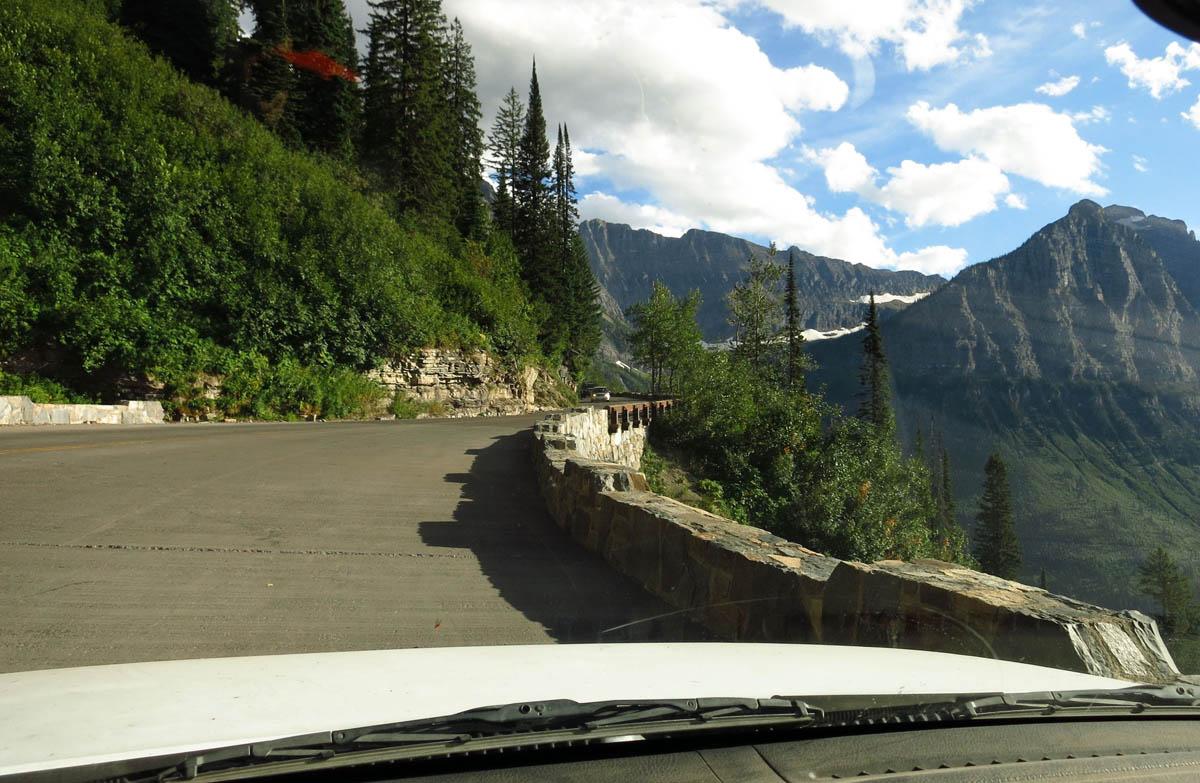 After having driven the length of the road myself, I decide to take the shuttle for my second visit to Logan Pass.  It is regular bus service as far as Avalanche Lake parking area, where you switch to smaller 15-passenger Sprinter vans.   The driver asks if anyone wants to “ride shotgun,” so I jump at the chance to sit in the co-pilot seat.  After being the driver of a Sprinter for two years now, it is a real kick to sit on the passenger side for once. 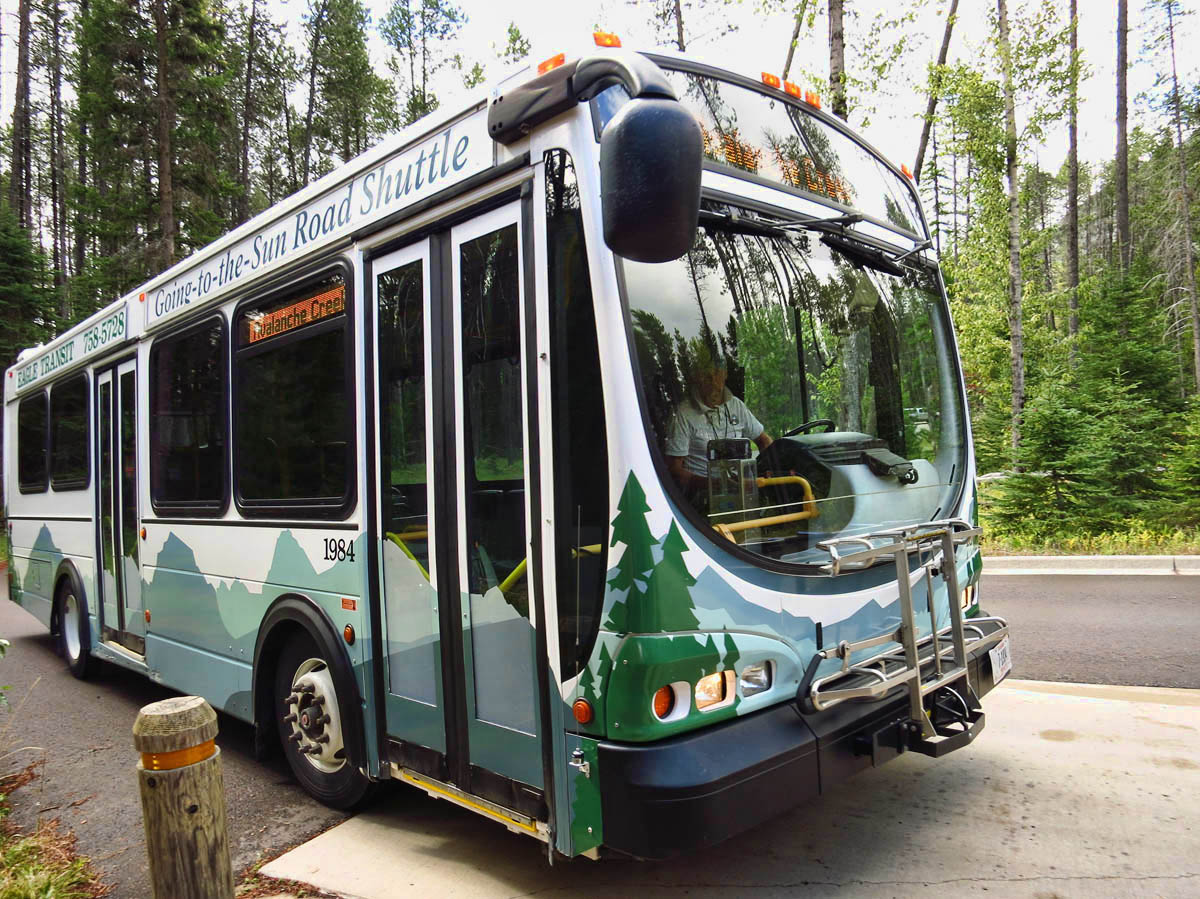 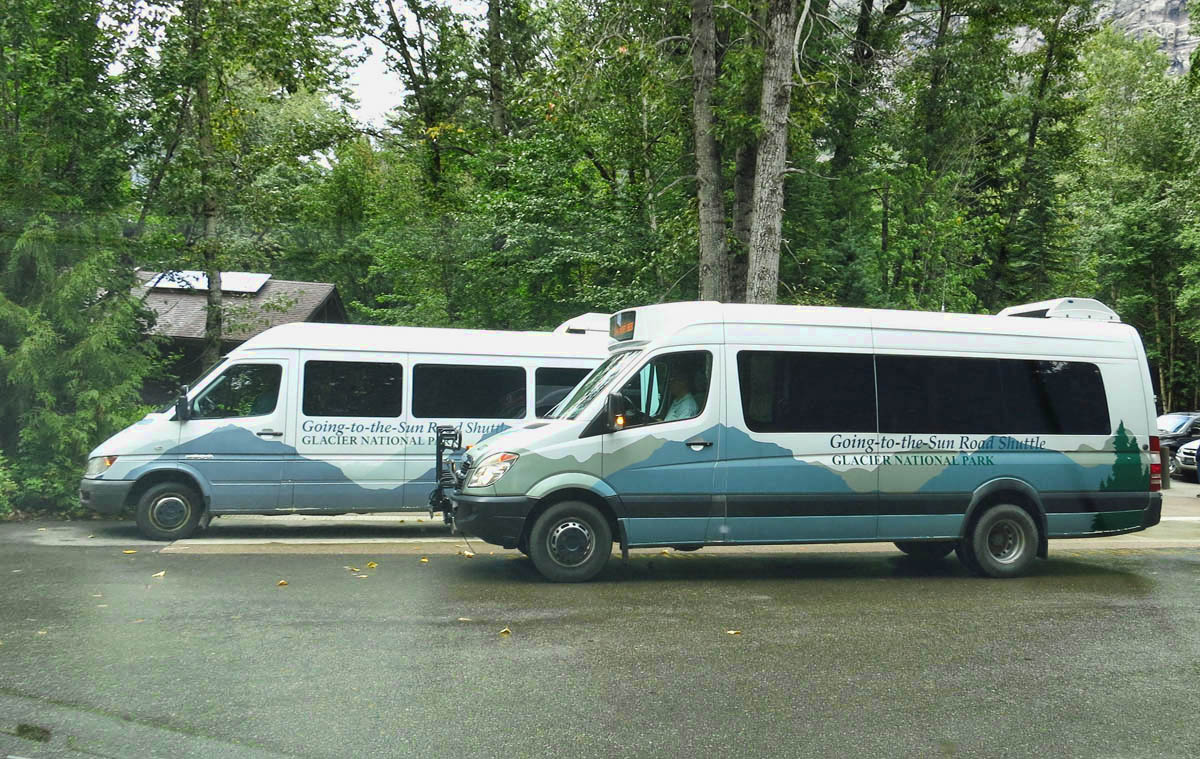 Change to Sprinter Vans at Avalanche bound for Logan Pass — sit on right!

If you take the shuttle service from Apgar on the West Side, I recommend sitting on the left side of the bus as far as Avalance.  This route runs the full length of Lake McDonald, so you can look right down onto the lake shore from the left side window.  But when it’s time to switch to the Sprinters for the ride up to Logan Pass, be sure to sit on the RIGHT side eastbound, so you can look straight down over the edge into the canyon.  😉 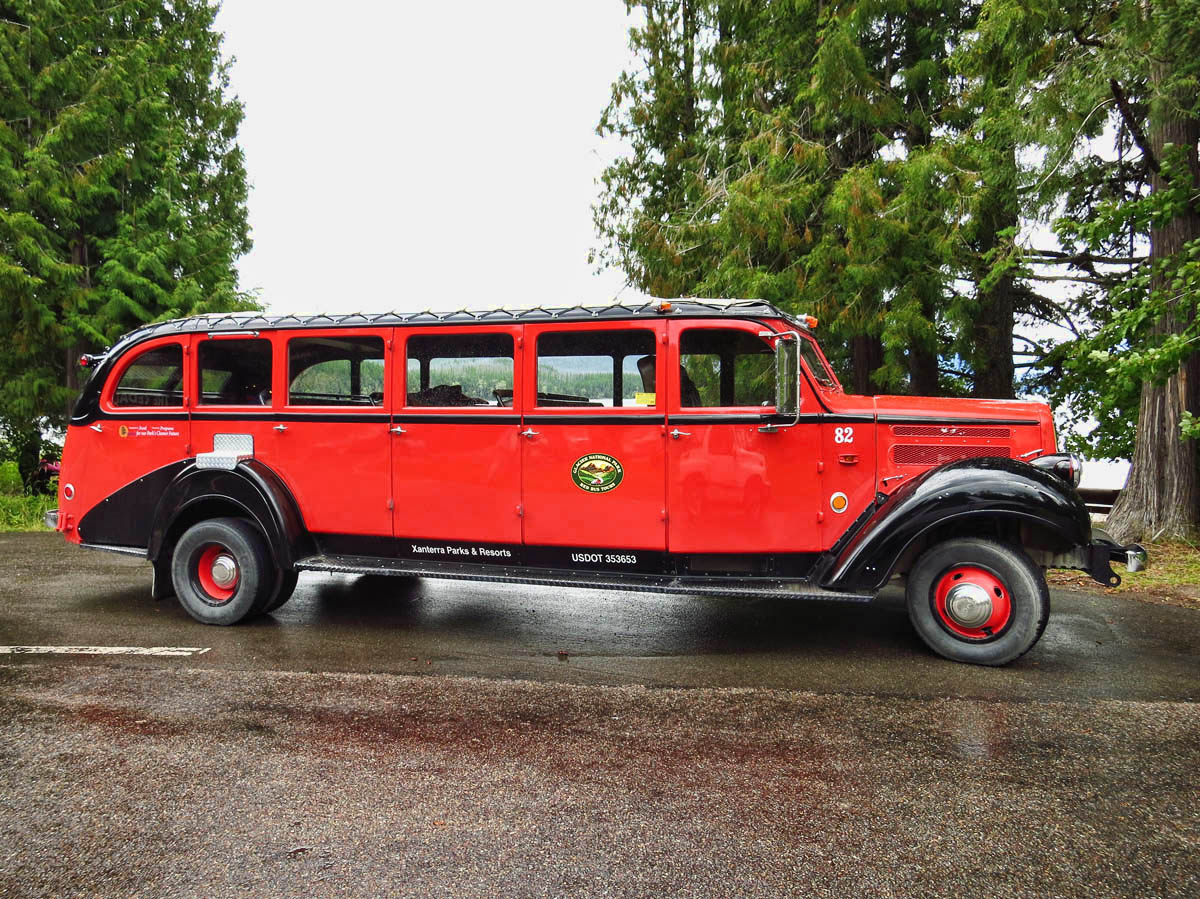 There’s one other alternative to crossing the Going to the Sun Road, and that is the ubiquitous “Red Bus Tours.”    Since 1932 these tours offer 17 passenger bus tours from one end of the park to the other for a mere $80.    That whirring sound that you hear in the background is Edward Abbey, rolling in his grave.

“Industrial tourism is a threat to the national parks. But the chief victims of the system are the motorized tourists. They are being robbed and robbing themselves. So long as they are unwilling to crawl out of their cars they will not discover the treasures of the national parks and will never escape the stress and turmoil of the urban-suburban complexes which they had hoped, presumably, to leave behind for a while.”
― Edward Abbey, Desert Solitaire