Several years ago, long before the Winnie was even a twinkle in my eye, I saw a Facebook post by my friend Joel’s wife Kathy about a hike she had done to a place I had never heard of before…Havasu Falls.  To this day, I can still recall the photos of her standing beside an aquamarine pool beneath a pristine waterfall, set against a back drop of a red rock canyon.  Those photos left such an impression that I started an Excel spreadsheet titled simply “Places.xlsx.”  Havasu Falls was the first entry in the spreadsheet. 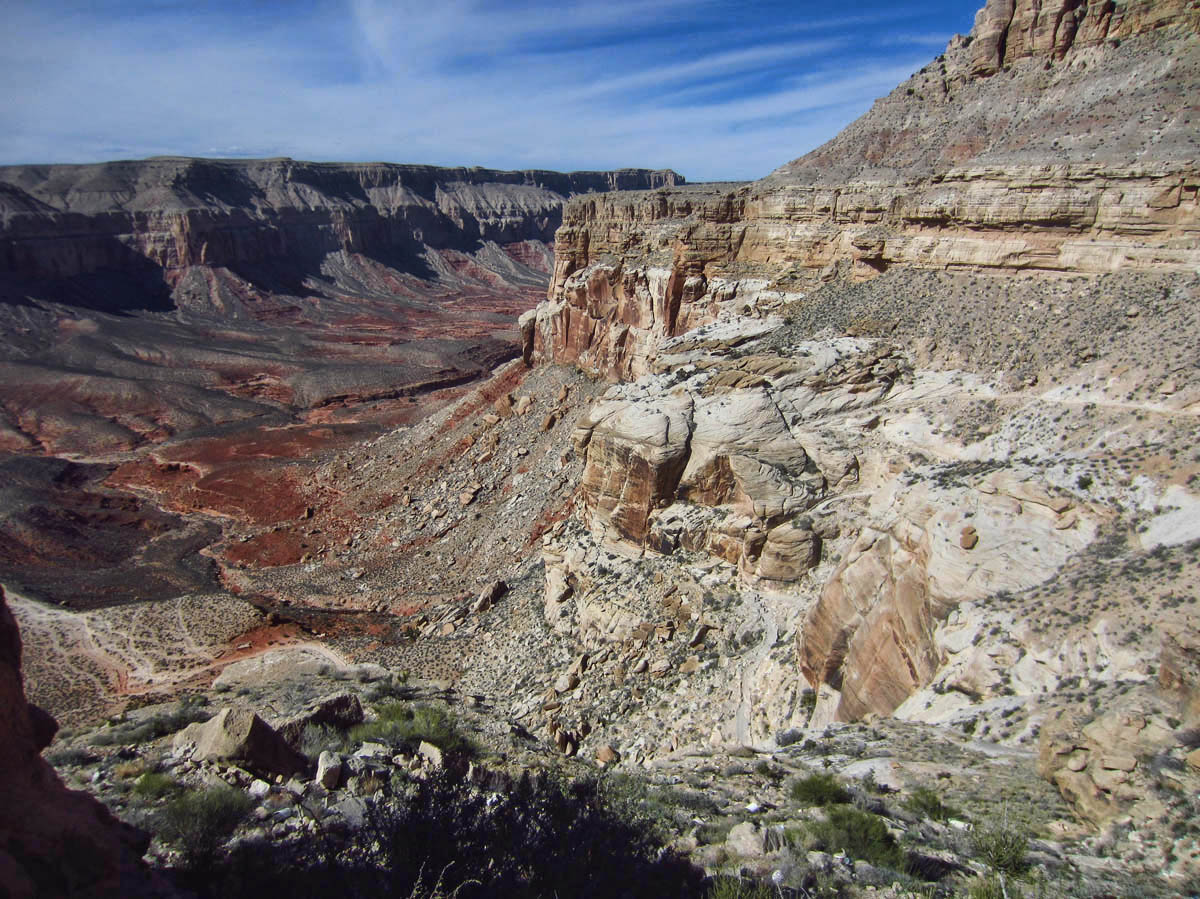 Overlooking the canyon where I am headed down. 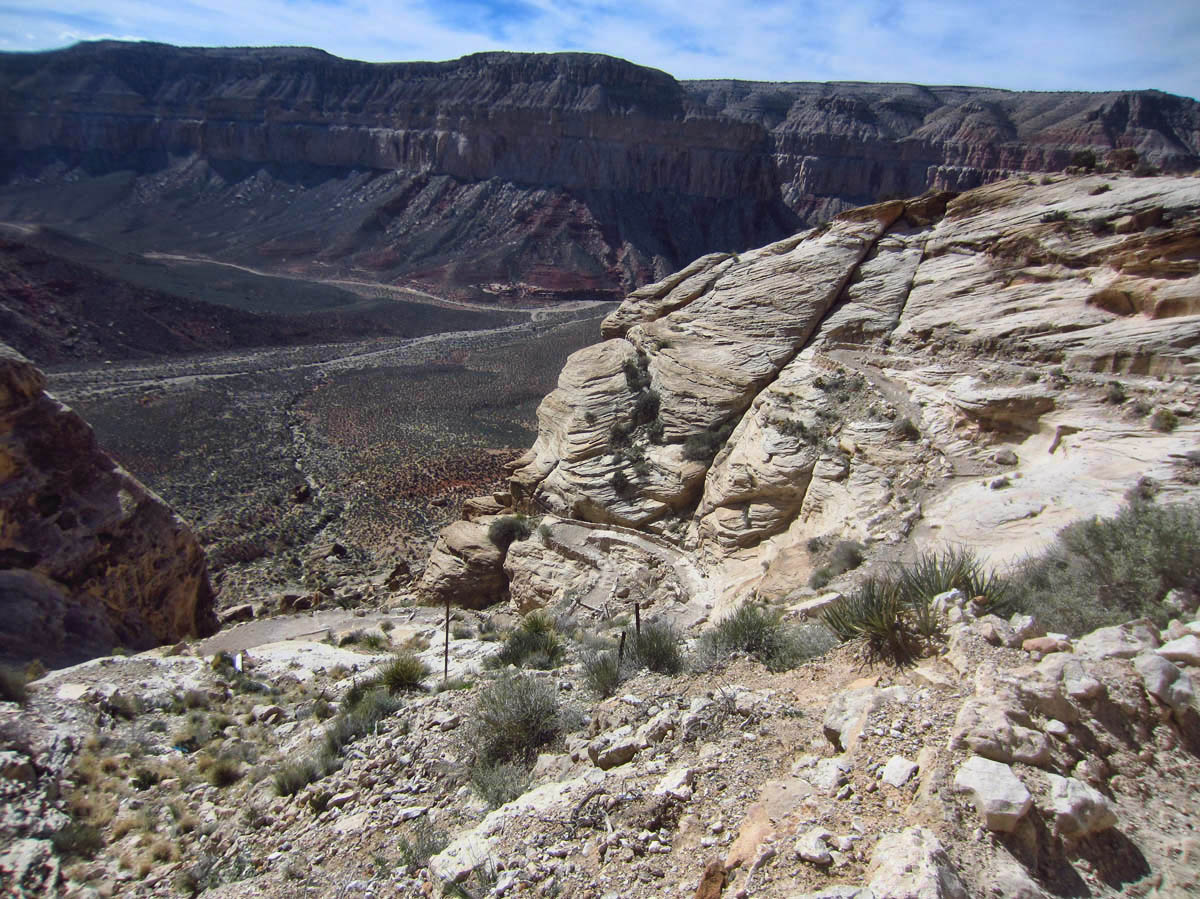 First mile and a half is all switchbacks. 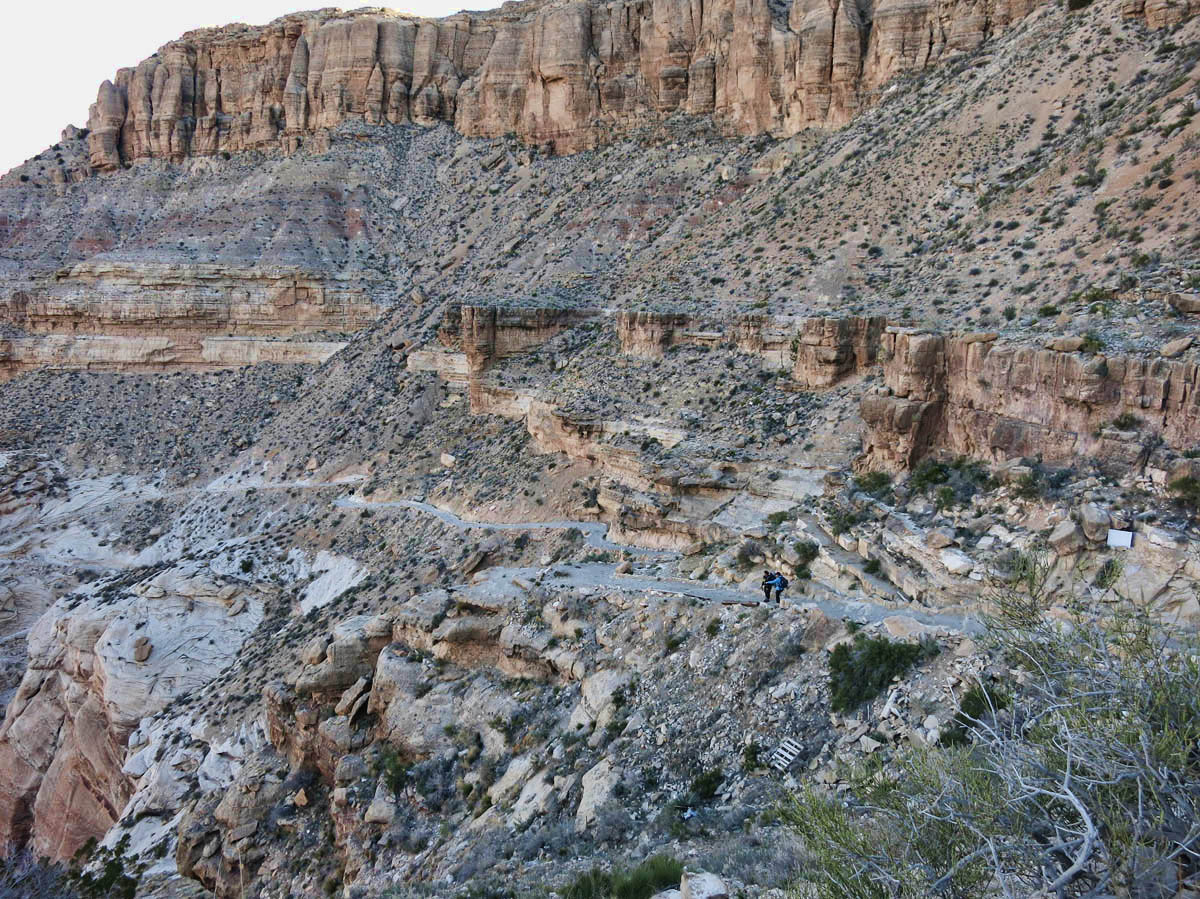 I am about to meet two new friends, Bridget and Melanie. (See blue dots two thirds down to the right.)

No wonder it took me three years to get here, as Havasupai is one of the most difficult places I have visited.  First, it can only be reached via helicopter, horseback, or hiking, or a combination thereof.  Second, since it is on Native American land, one must obtain a highly sought after permit.  Third, there are only two options for over-nighting.  Tent camping, or a ridiculously priced “lodge.”  Since I don’t own lightweight camping gear, I opted for a reservation at the lodge, holding on the phone throughout an entire Laundromat wash cycle to get through. 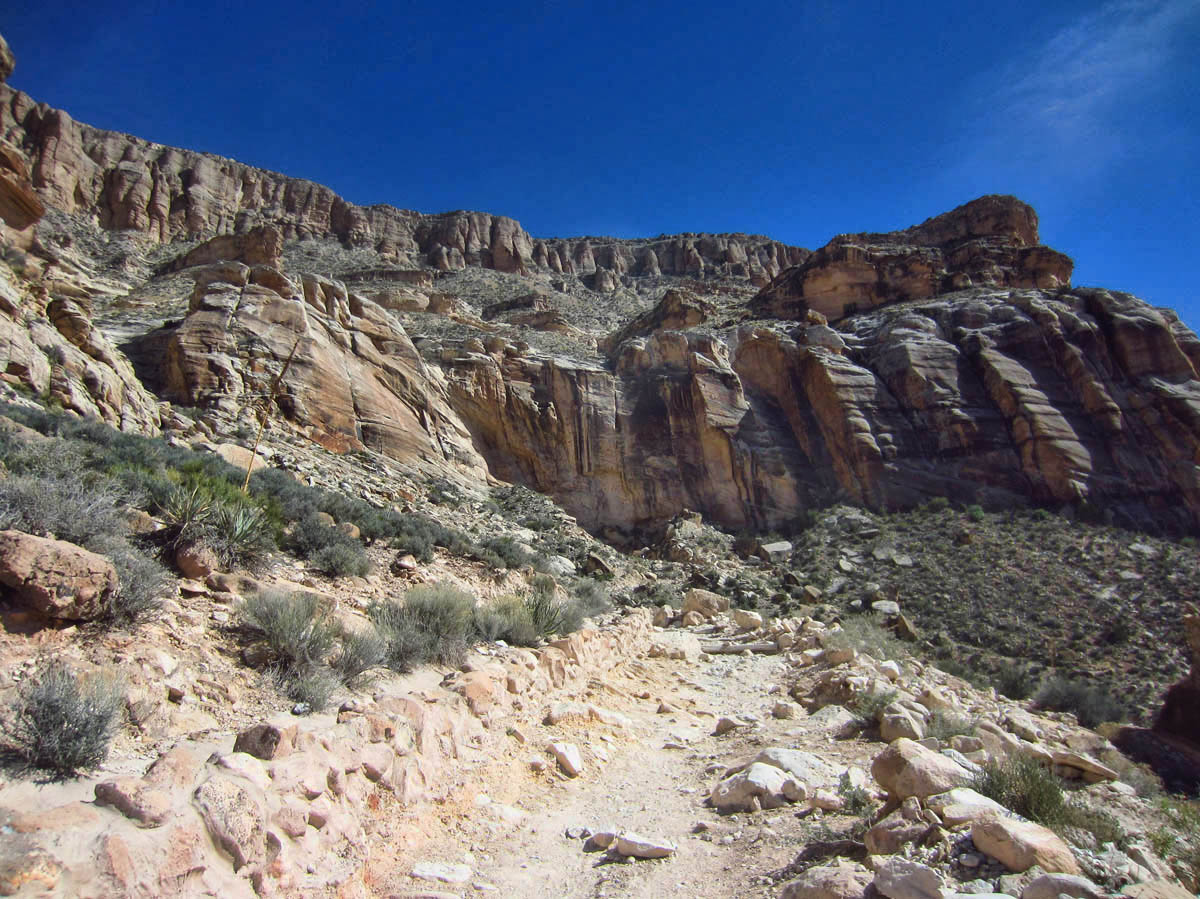 Here is what I will be climbing at the end of the return hike. 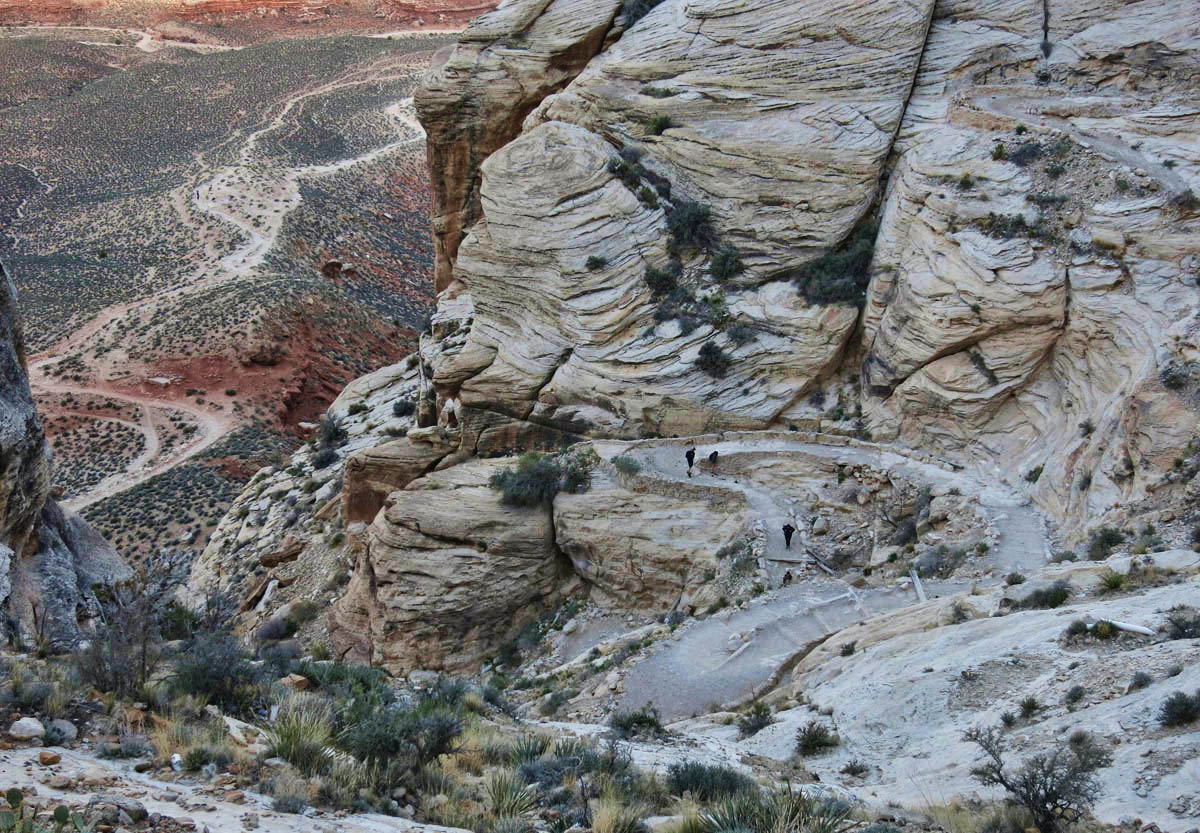 Permit and reservation now secured, I then start attempting to figure out the logistics of getting myself there.  The trailhead is located at “Hualapai Hilltop,” sixty miles down Hwy 18 off Historic Route 66 near Peach Springs, Arizona.  Ironic that the closest place I can park the Winnie is on Route 66, exactly 66 miles from the trailhead!   I call several times to make a reservation at the Grand Canyon Caverns Inn and RV Park.   This is a challenge in of itself.  After numerous attempts, I finally get through to confirm a dry camping reservation at $20 a night.   I will leave the Winnie here, then drive the Tracker the 66 miles to the trailhead for the overnight hike.

The 66 miles down Hwy 18 is through Indian reservations, and there is nothing….and I do mean NOTHING along this road, including cell service!  You had better have your gas, your water, your food, your socks before you ever leave Peach Springs, or you are turning back 66 miles! 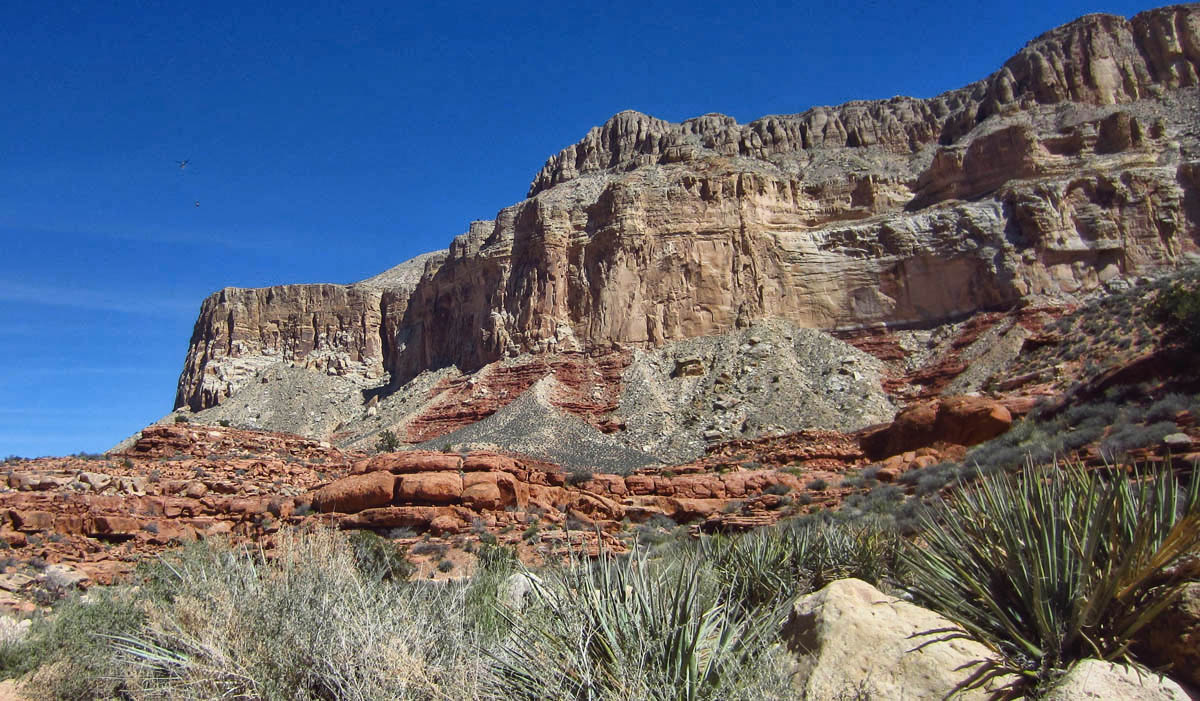 I originally took this photo because there is a helicopter “towing” a large bundle by cable in the upper left, but too tiny to see unless you click to enlarge. 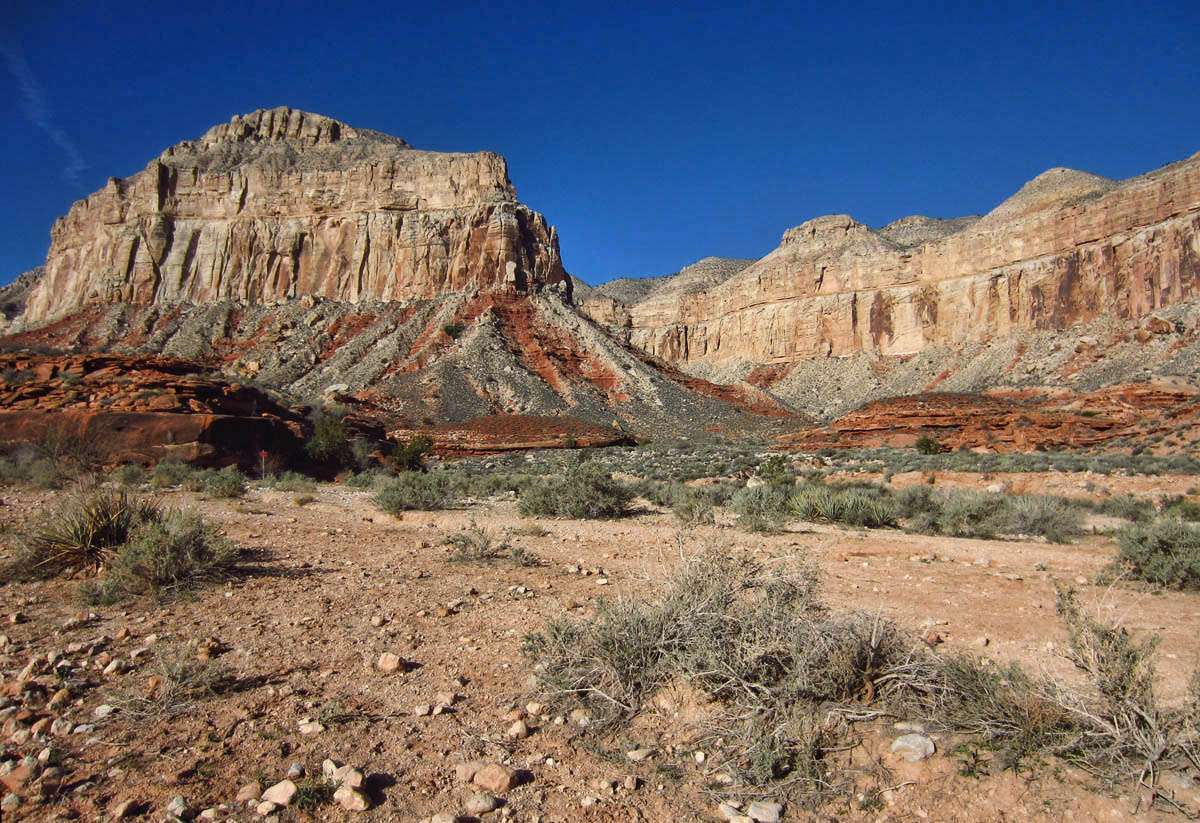 Once you reach the bottom of the canyon, hang a right. 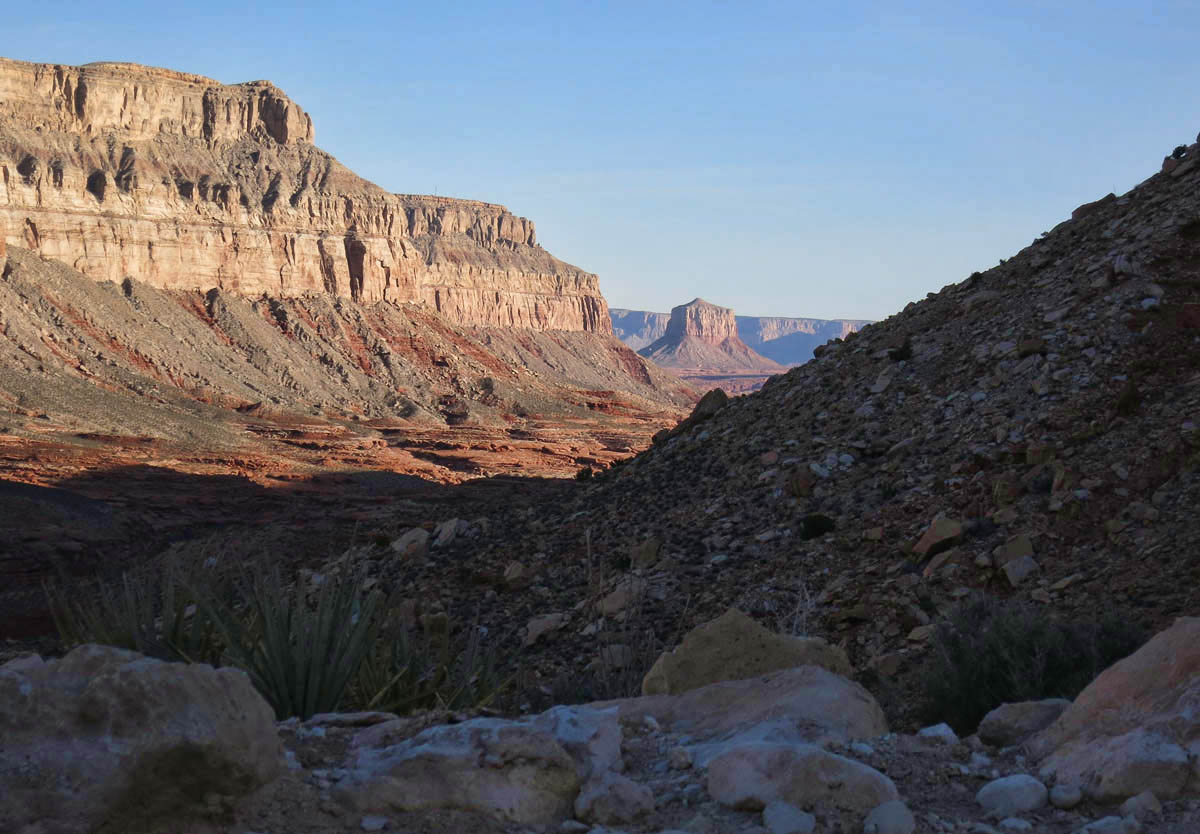 I didn’t do enough research on the logistics of this hike.  The Lodge, located in Supai Village, is still 1 ¾ miles from the first waterfall, Lower Dakota Falls….two miles from Havasu Falls itself, and yet another mile if you want to see the third falls, Mooney, which is in my opinion, the prettiest of the three.   So to see them all, it will  mean a hike of a minimum of fourteen miles my first day – eight to the village, three more to see the falls, and three to return to the village.  Had I done more research, I would have known it was possible to send camping gear down by mule, therefore I would have camped near the falls.  But weather at this time of year can also be a bit “mercurial.” 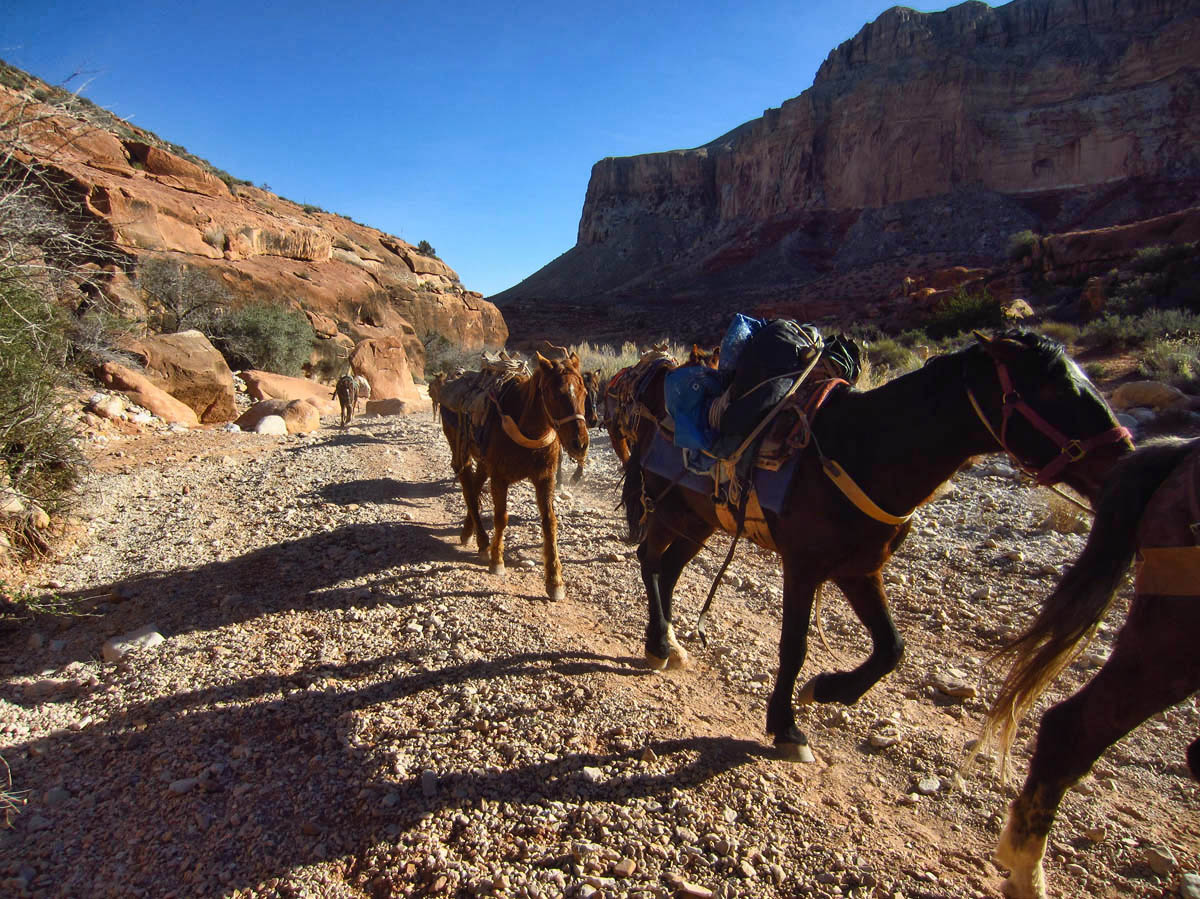 Is it an earthquake? A freight train? No, it’s the daily mail! 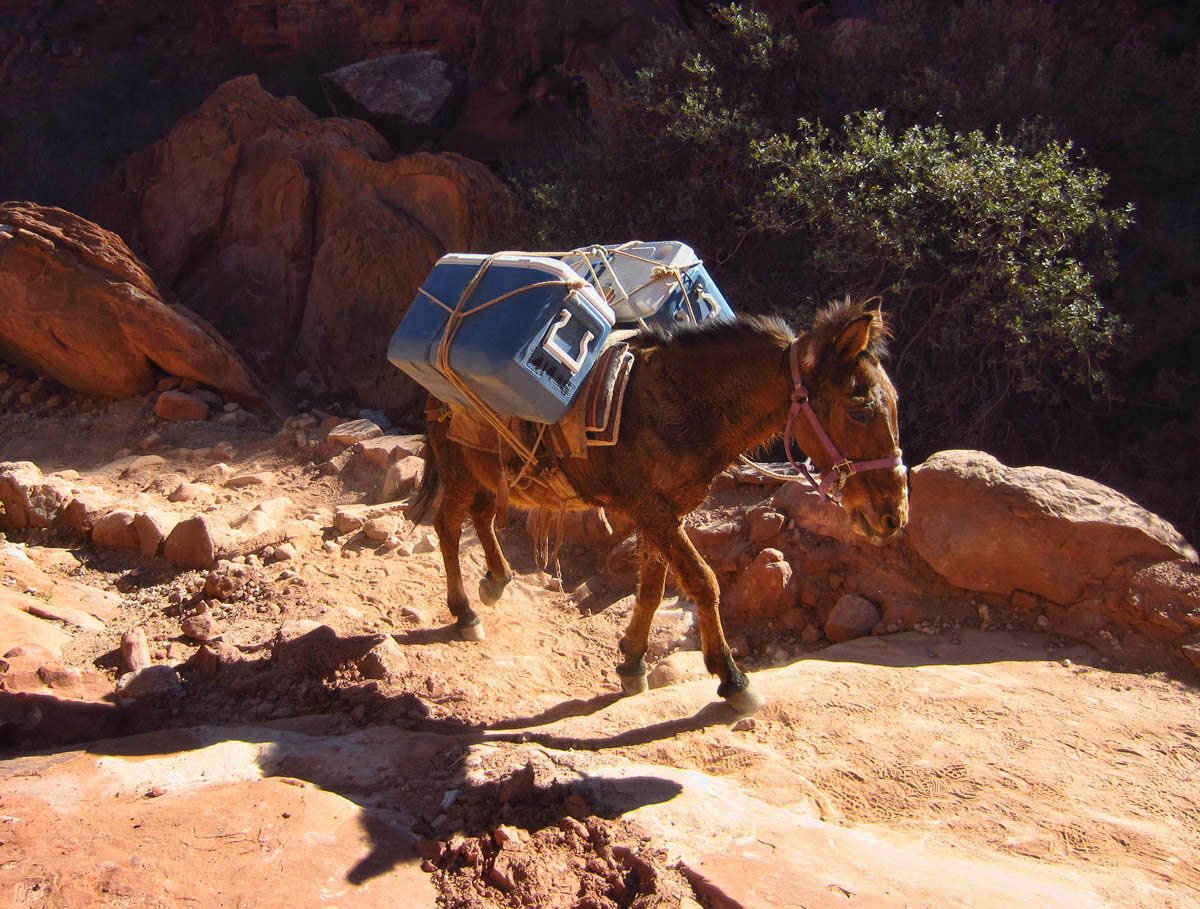 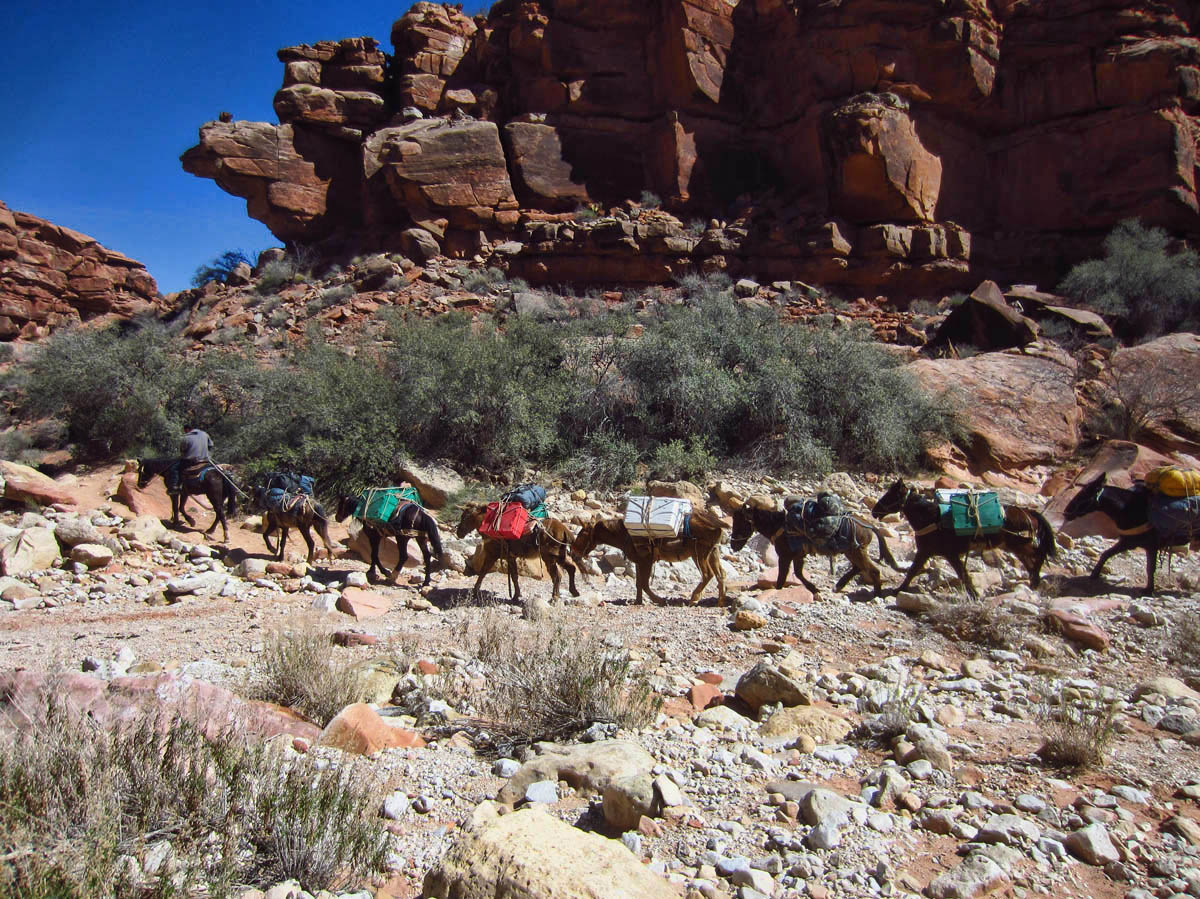 I have never hiked fourteen miles in one day before.  Especially not alone.  Thirteen has been my greatest distance, and it was with a group of friends, which always makes the miles fly by.  I also know I need to hit these three waterfalls on the first day, as the second day will be an all uphill return.  I need to get an early start, as I will need every ray of sunlight I can get.   Due to the road conditions, I am told it will take 90 minutes to get from the GC Cavern RV Park to the trailhead at Hualapai Hilltop.   I set the alarm for 5:00am with the hope to be on the trail by 7:00am.  I make it by 7:40am.

As I reach the parking lot, I am pleasantly surprised.  The canyon that opens up before me is just gorgeous, especially in the early morning light.  It is cool, but as soon as I hit the first sunny spot, I start de-layering. 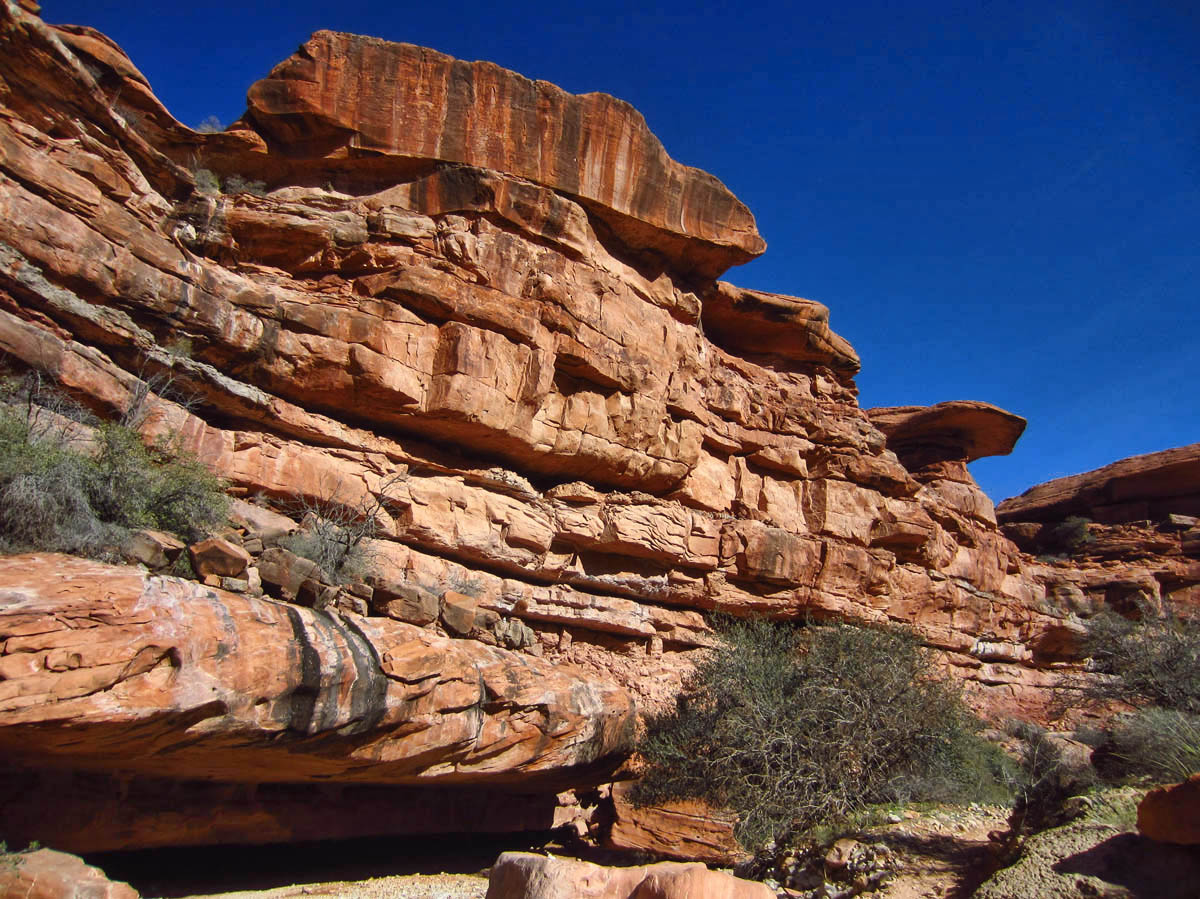 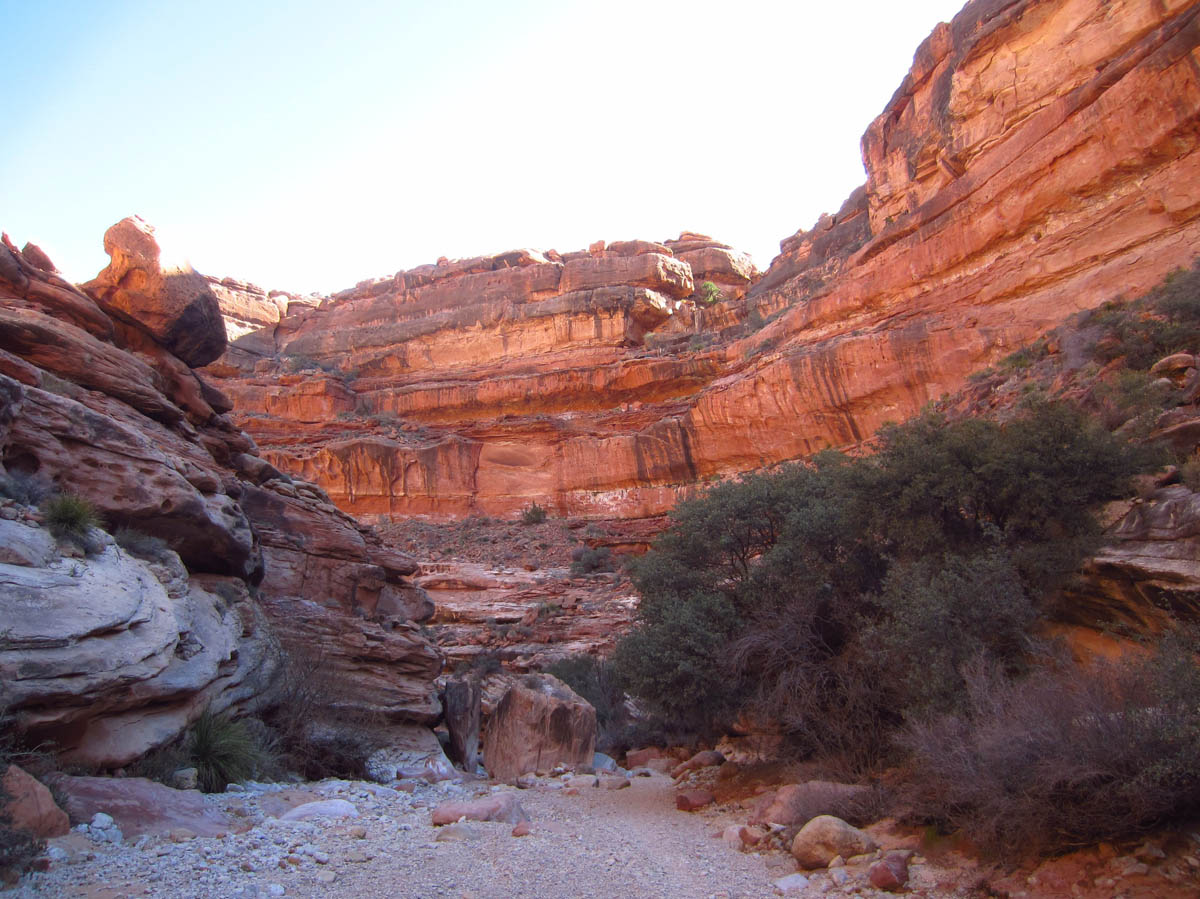 The first 1.5 miles of the hike are steep, white-rock switchbacks, down, down, and more down to an eventual elevation loss of over 2,000 ft.  A sign at the entrance of the trail warns against wearing earphones, as one could be injured by the approaching horse and mule trains.  They aren’t kidding.  If you have ever heard tell of the horse that gets faster, the closer he gets to the barn, you will understand.  These “trains,” horses or mules roped up to one another, come thundering through this canyon at a speed so fast it took me two or three attempts to capture them with my camera.   I can hear them and feel the vibration of their pounding hooves long before I see them come around the bend.  I quickly learn to get off the path as fast as possible, preferably in a place where I can’t be pinned in or pushed off!  And if you have an aversion to hiking in horse manure, this might not be the trail for you.  Between here and the Supai Village, “horse poop is the new khaki.” 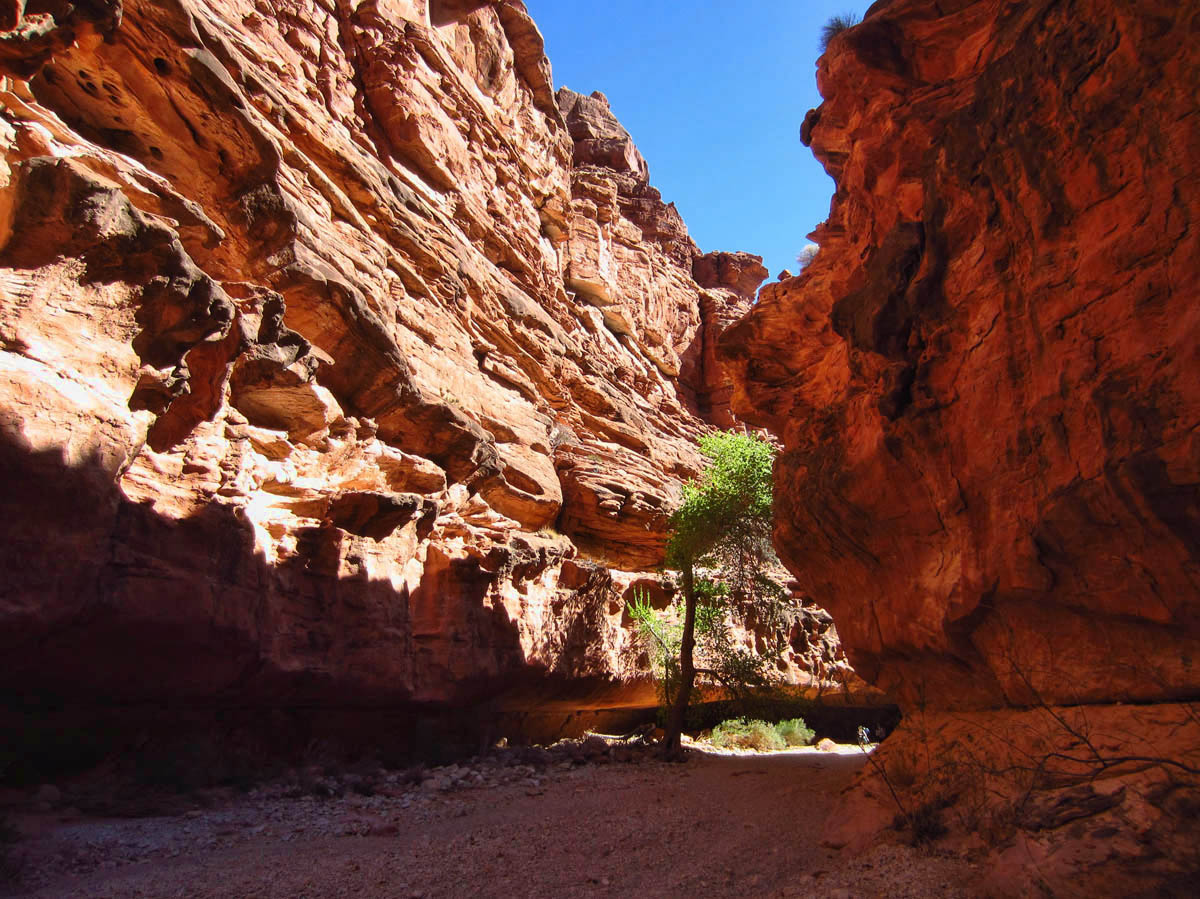 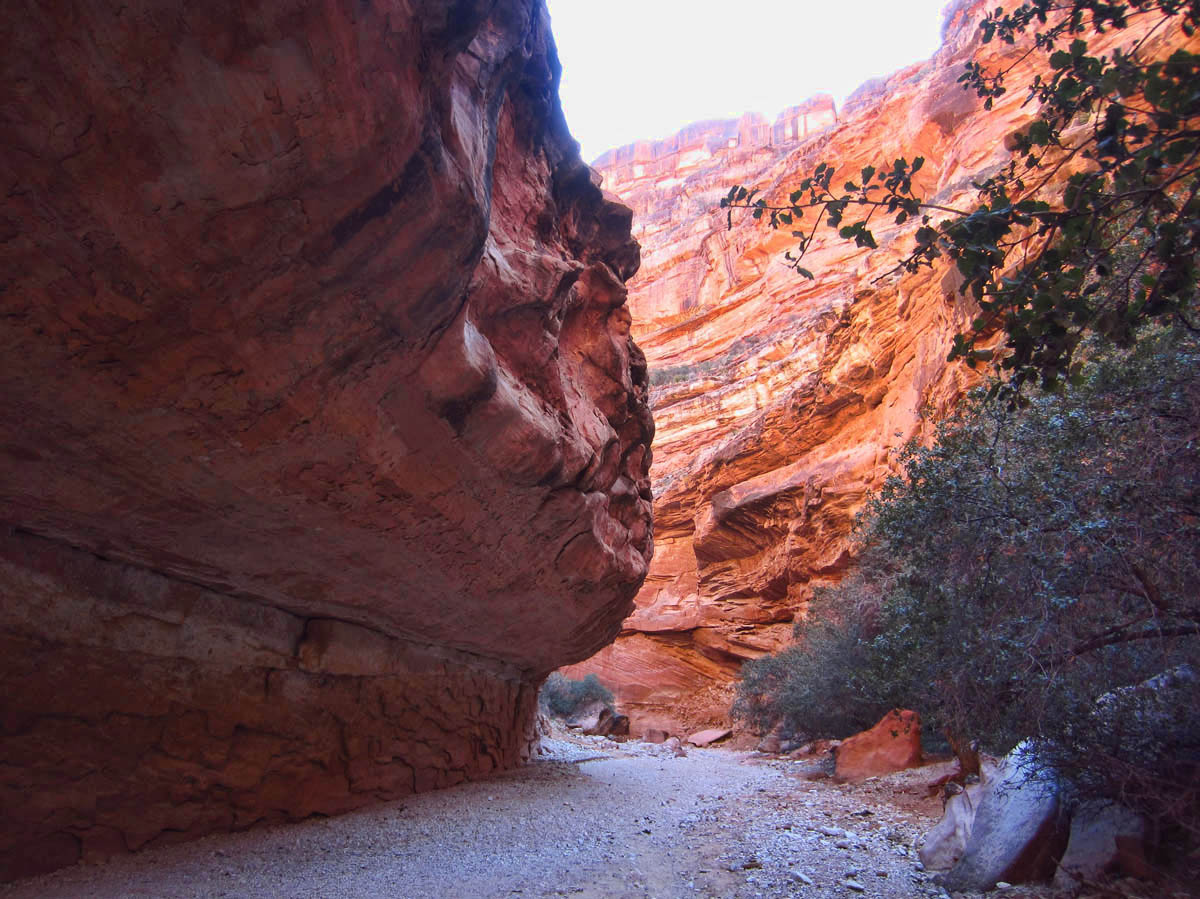 As soon as I reach the bottom of the canyon, the trail hooks right into a gravel-filled wash.  This is where the red walls of the canyon get taller and narrower, and I have trouble making headway for stopping every few minutes to snap photos.  The deeper I go into the canyon, the more stunning it becomes! 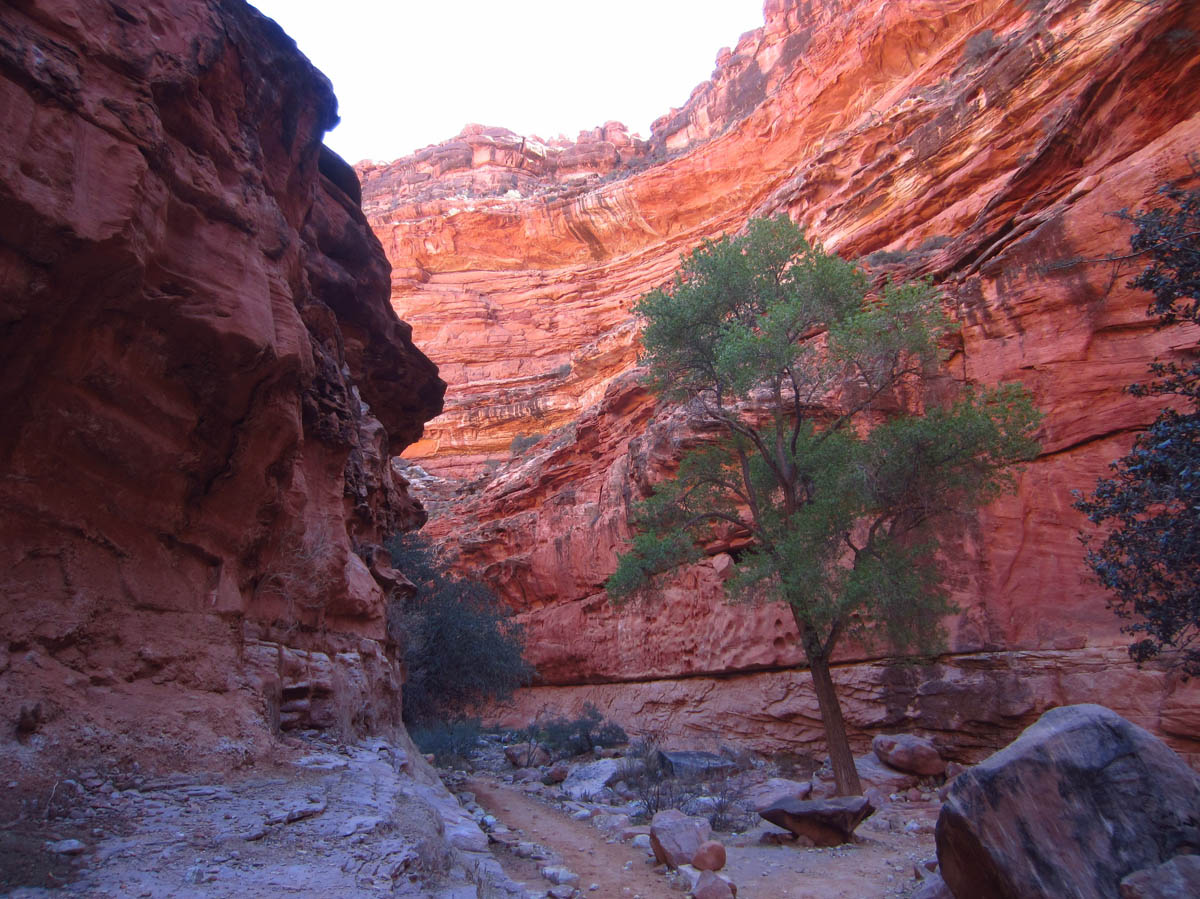 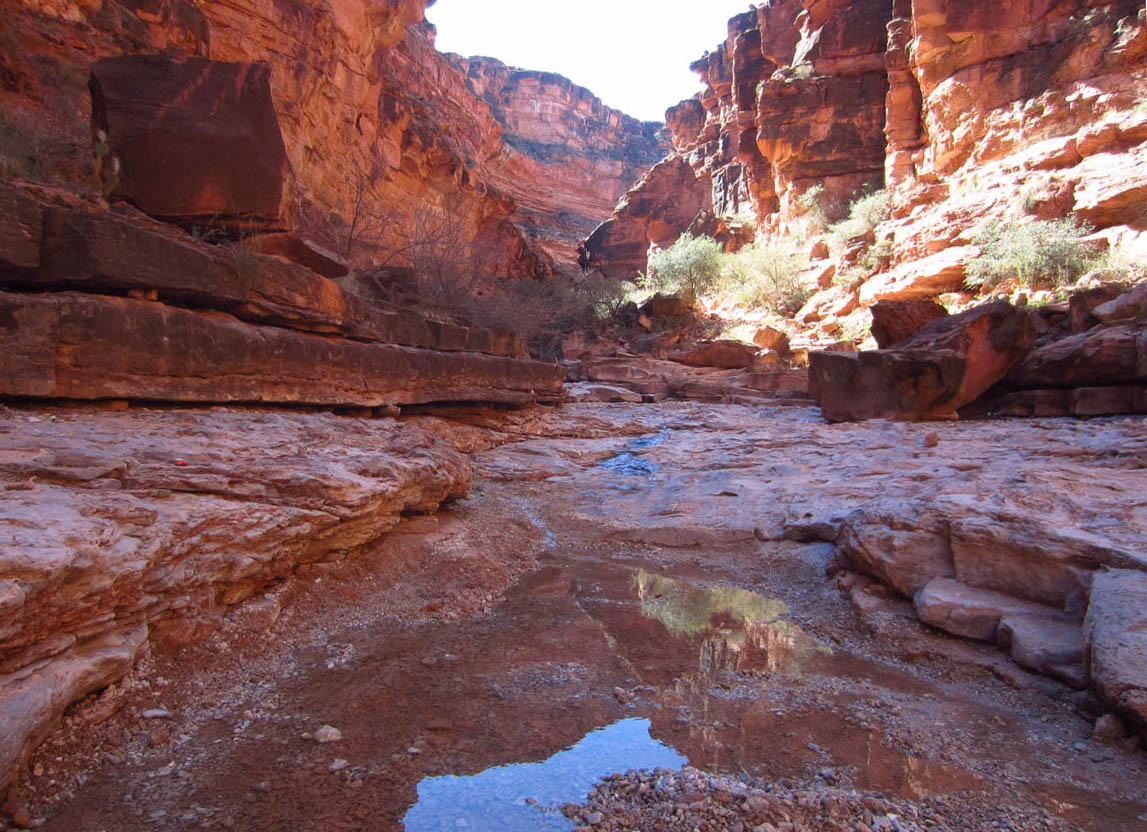 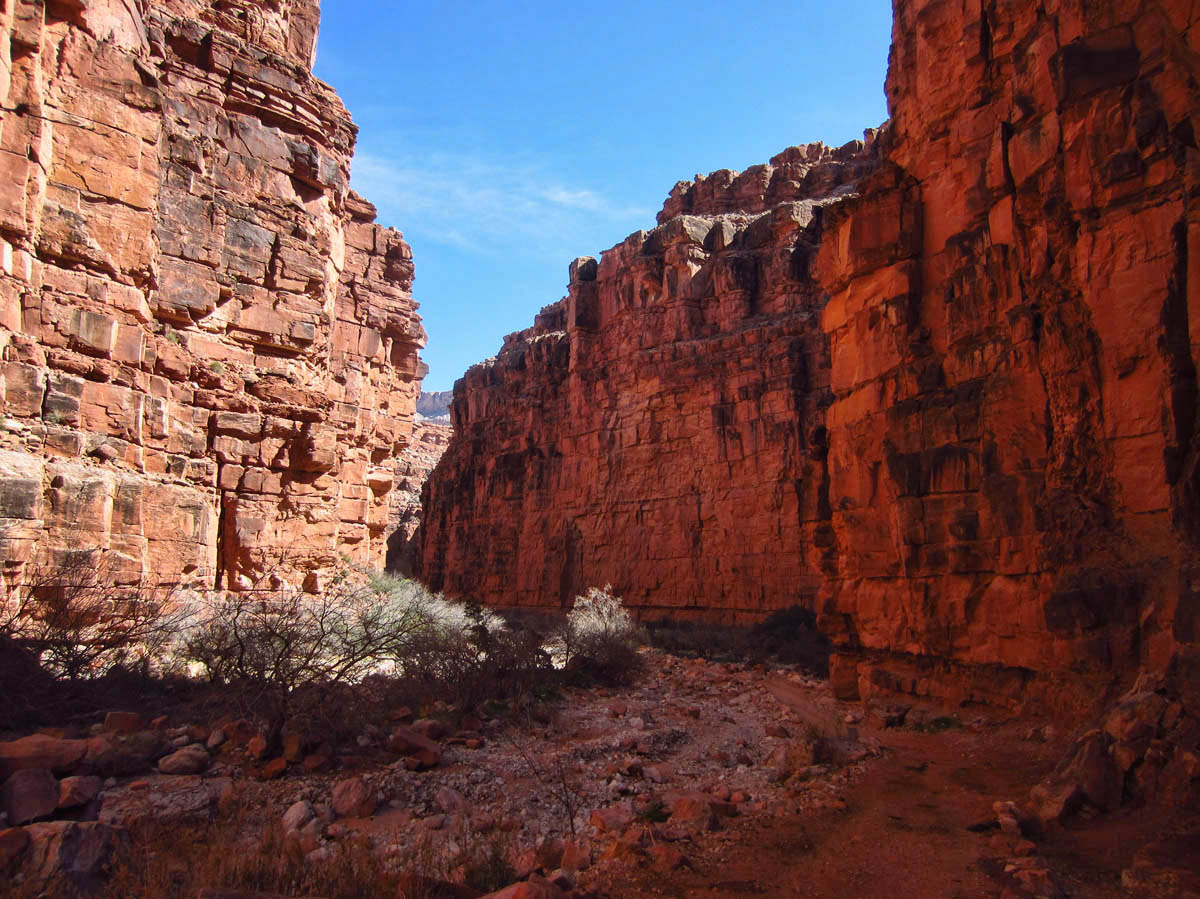 The canyon comes to a “T” and I see a large grove of brilliant green Cottonwoods ahead in the distance.  This tells me I have reached the river, finally.   One of only two signs I have seen along the trail lies ahead, telling me I am “almost there.”  I am at mile marker six, with another two miles to go to reach the village.  The next two miles are shady, cool, and serene, as the path runs alongside the spring-fed Havasu Creek.  One look at the perfectly clear, aquamarine tinted water in the riverbed tells me the pictures I have seen don’t lie, and I am in for a treat once I reach the falls. 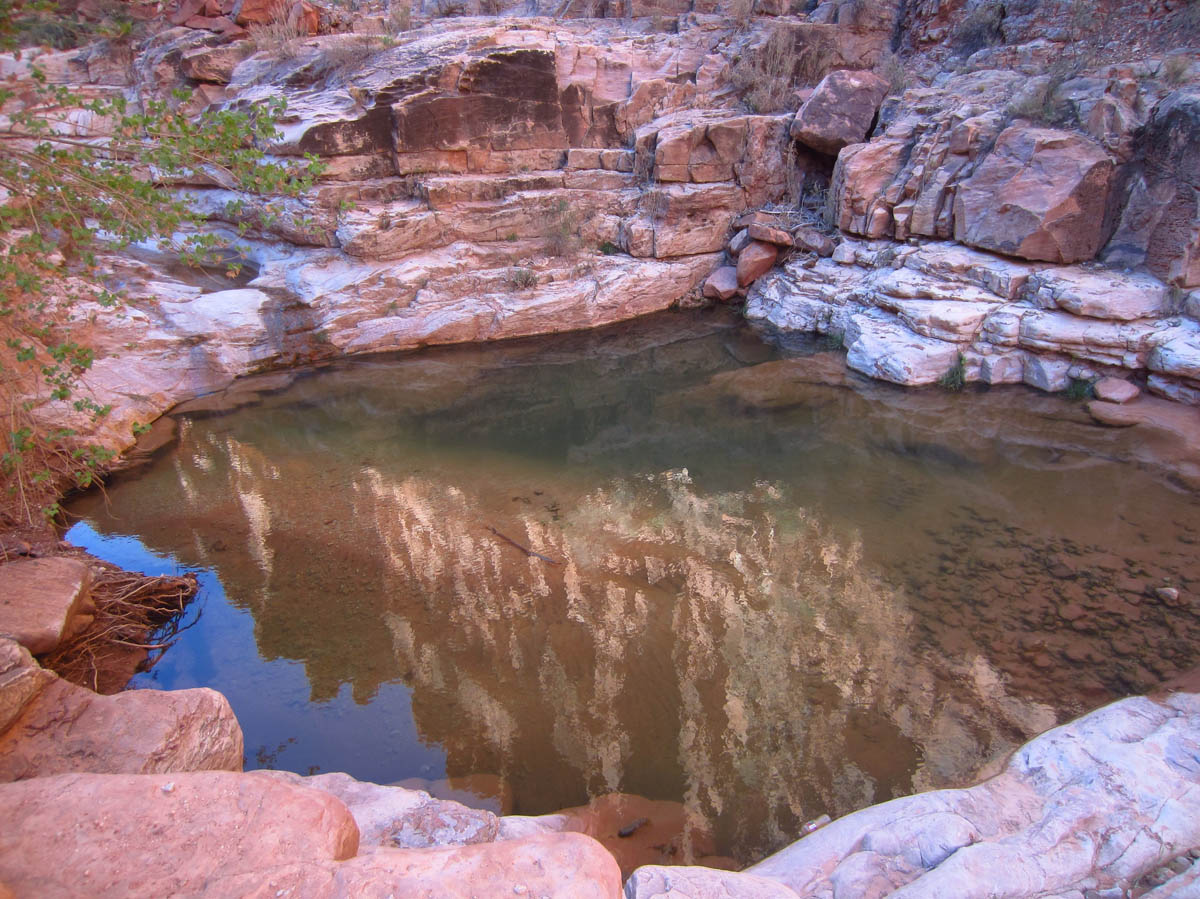 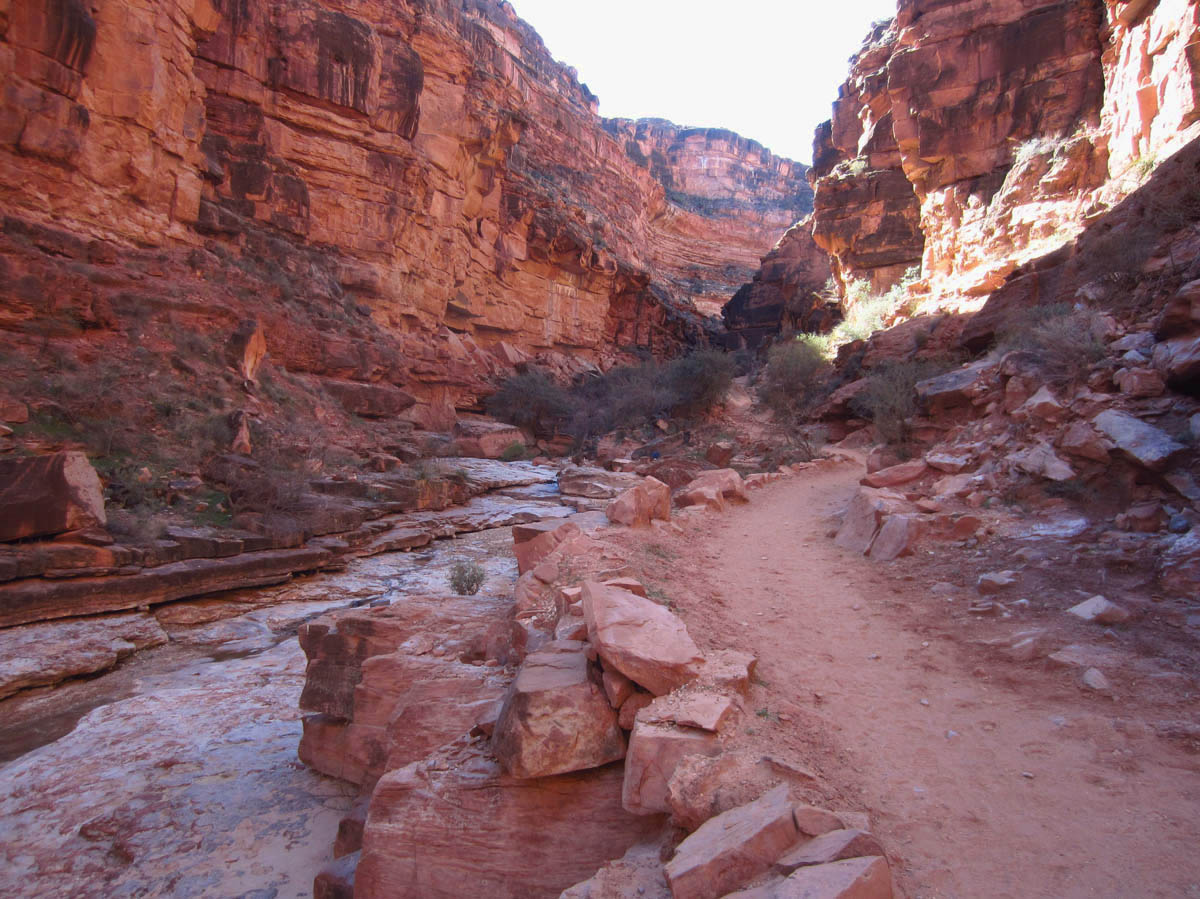 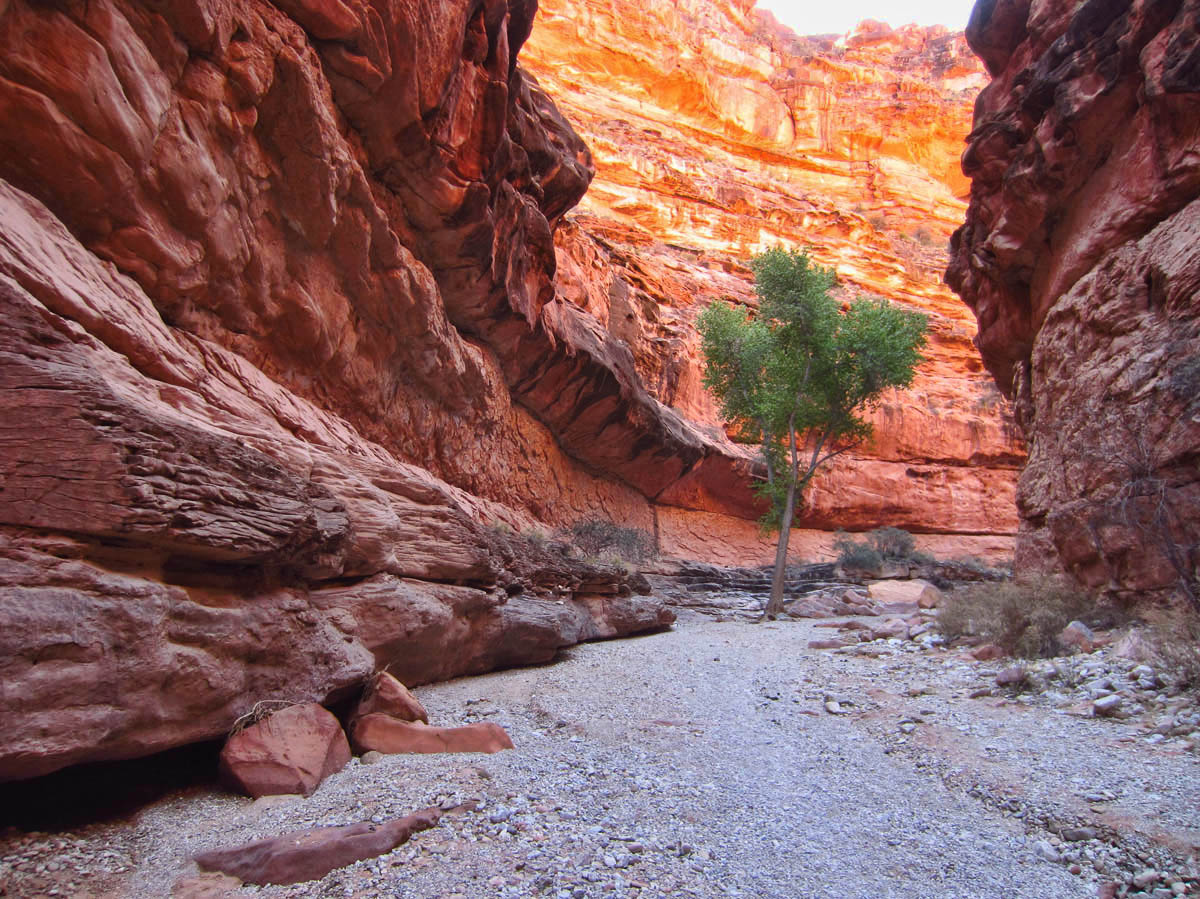 I am sad to say the one disappointment in this experience is the Native American village of Supai.   The environment seems more oppressed than many third world countries I have visited.  There is a lot of trash and litter around, seemingly more livestock than people, ergo the smell that accompanies them, and the majority of the villagers are morbidly obese.  This place would be an Americorp worker’s dream.

But the most disturbing part for me is the lack of willingness to interact.   No eye contact, no conversations.  I try saying hello and thanking some of the trail workers along the way, but my comments go unacknowledged.  I guess who can blame them.  After all, they no doubt would rather us not be there, and do their best to tune us out altogether.  The dichotomy of demographic in the village’s only cafe is laughable. Heavy set locals wearing long baggy shorts, over-sized teeshirts, and in one case, house-shoes sitting on one side, and fit, REI catalog geared up tourists with their faces buried in their smart phones on the other side. How ironic that the one thing the white man gave back to the Native American only brings more white men.  Rarely do you see an Indian Reservation that can be cultivated.  The land is often rocky, unlevel, or uninhabitable.  So all they are left with are tourist attractions and casinos…adventure-seeking tourists or fortune-seeking gamblers, both willing to part with whatever price they must for their fix. 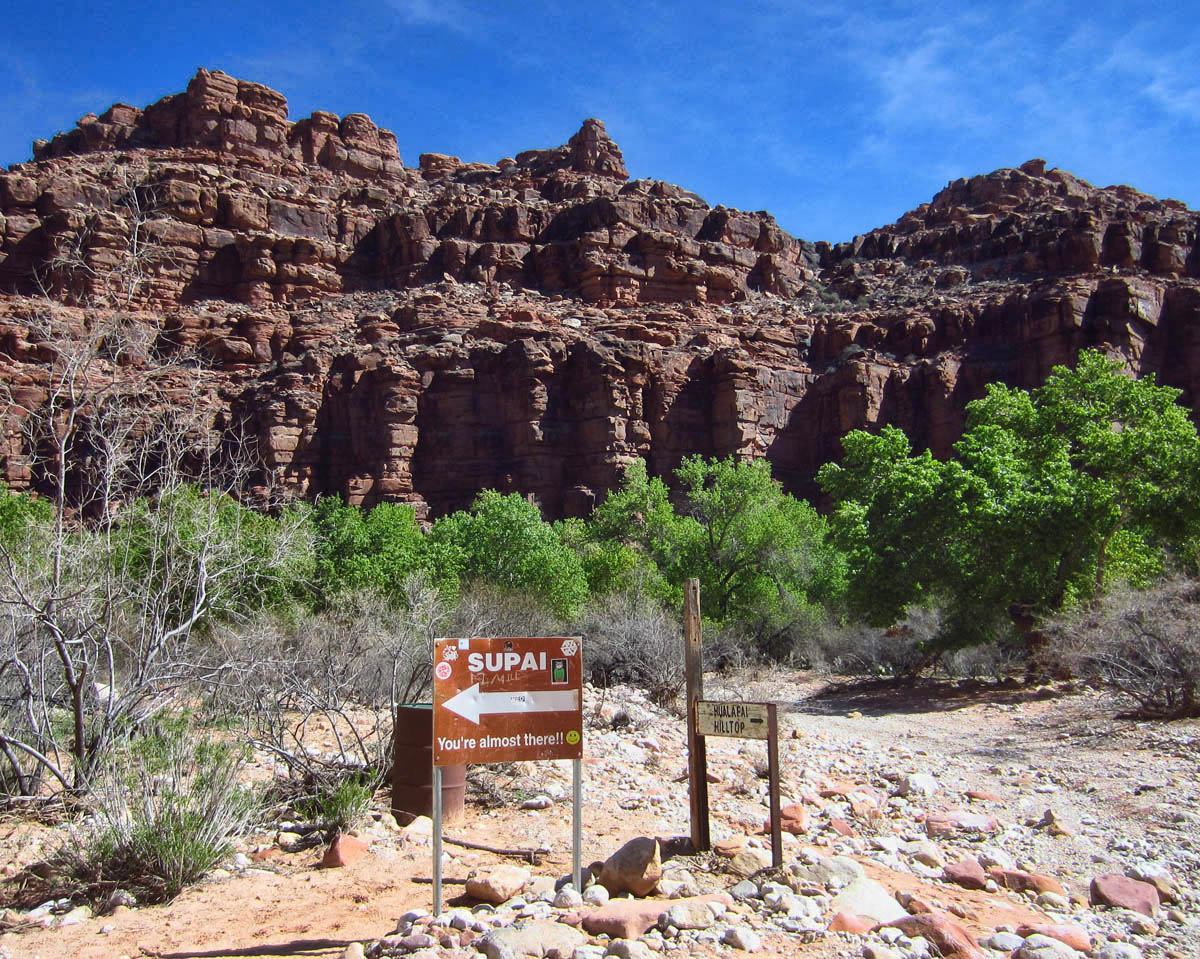 Six miles down, two to go… 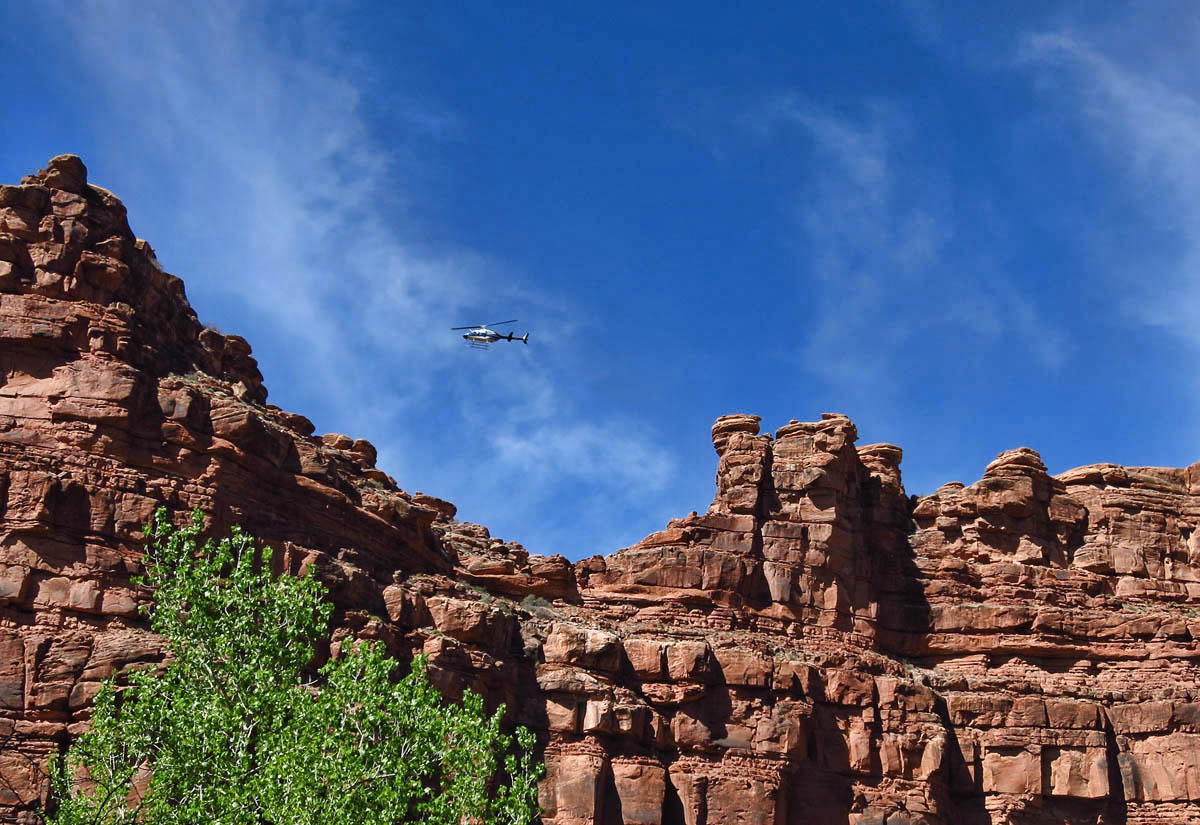 Helicopter fly-overs are continuous between the hours of 10am and 1pm. 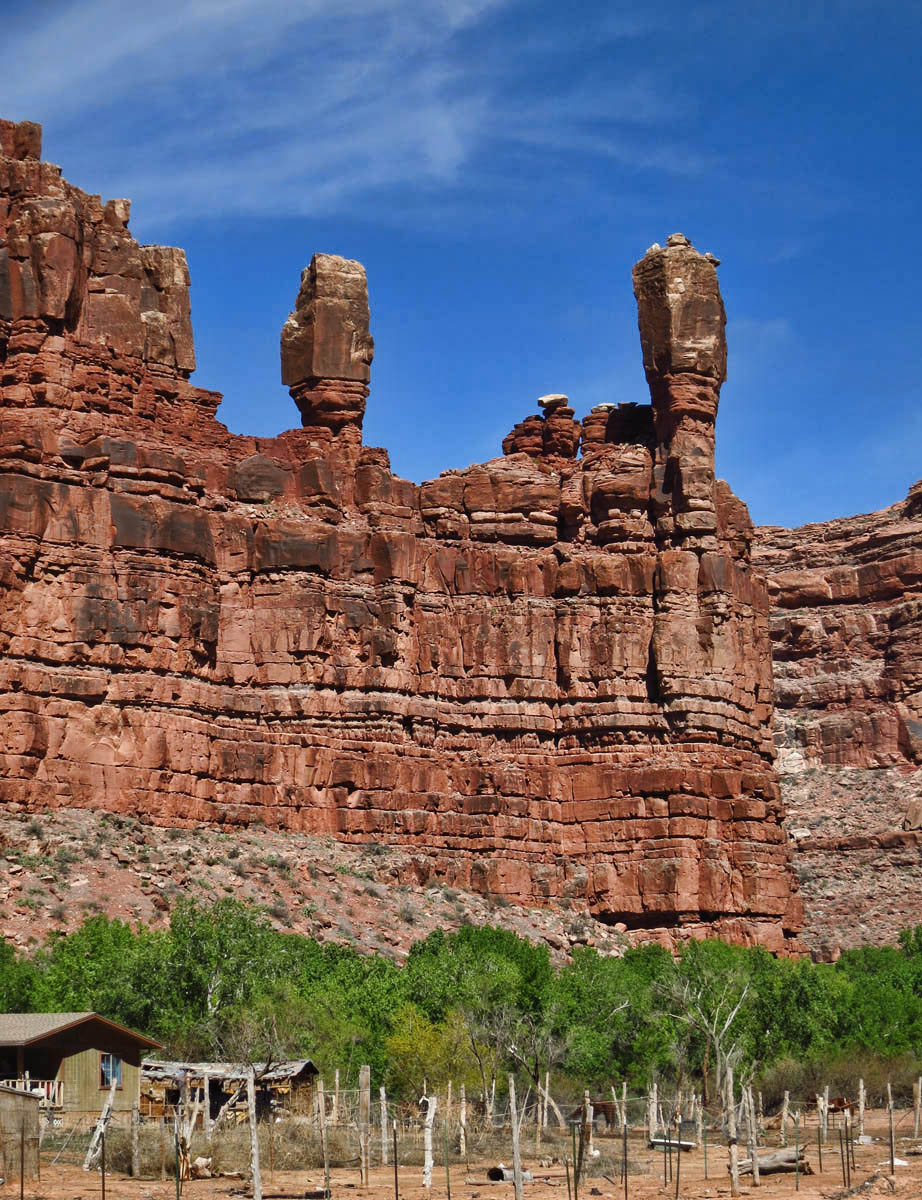 The woman staffing the desk at The Lodge is downright surly.  If you ever watched Northern Exposure and remember Marilyn, Dr. Fleishman’s associate, you know what I mean.  Every comment is met with a blank stare, a long pause, and a deadpan response. 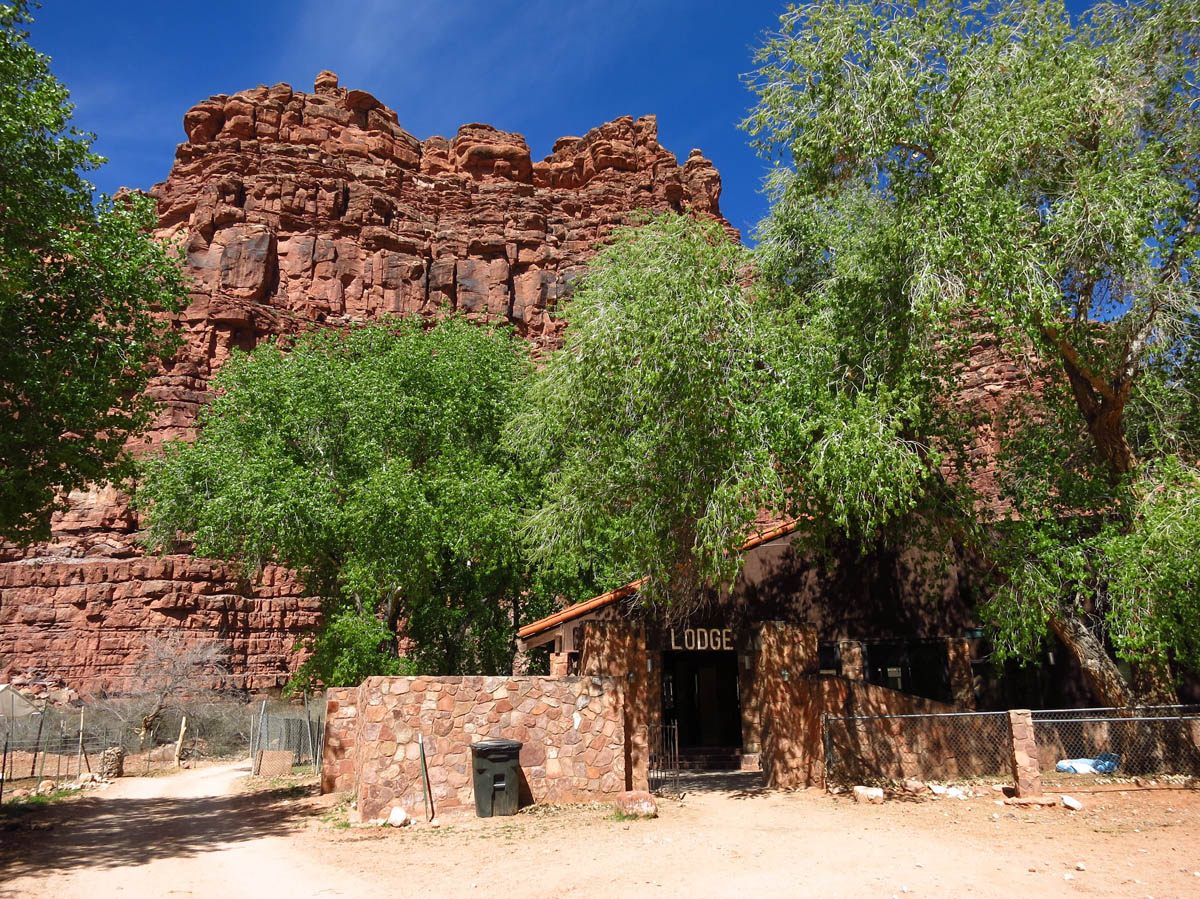 The Lodge is 8 miles in. 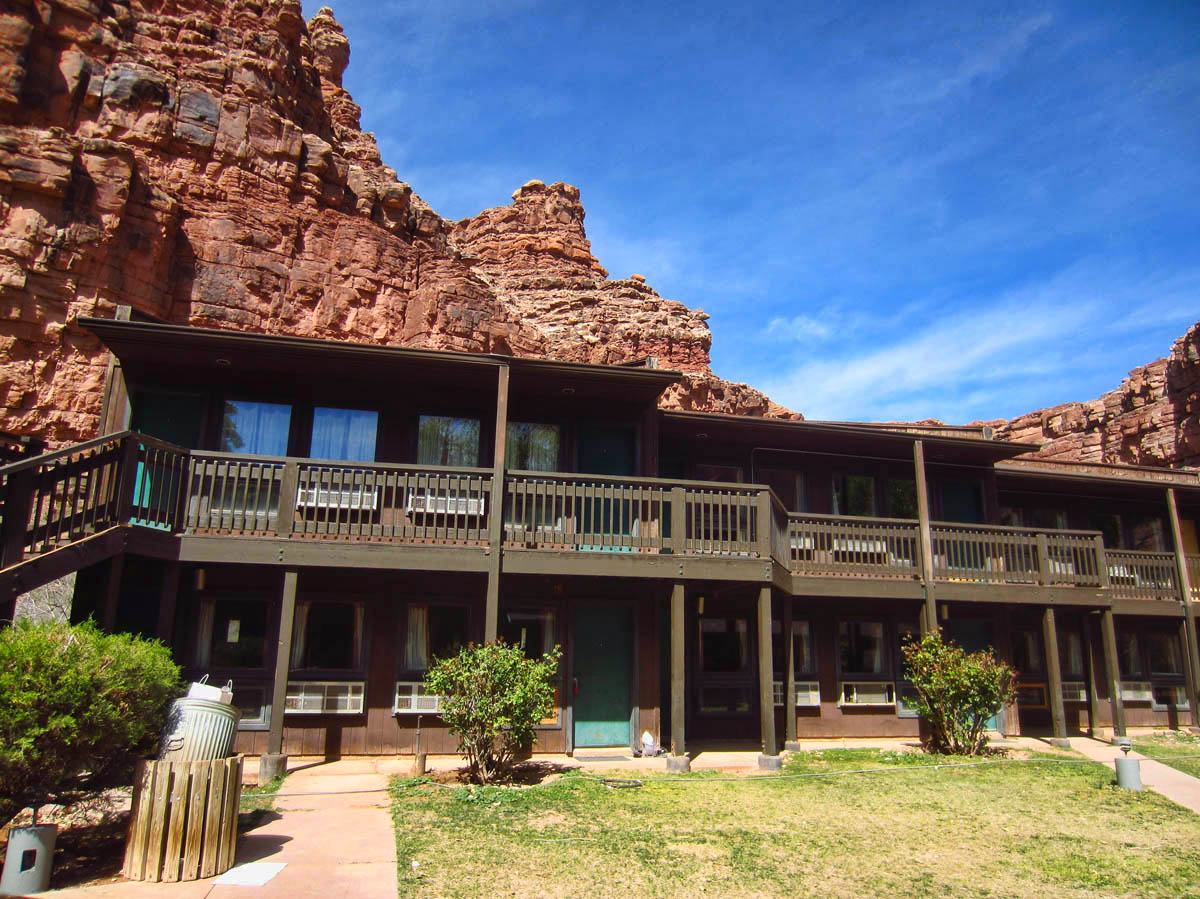 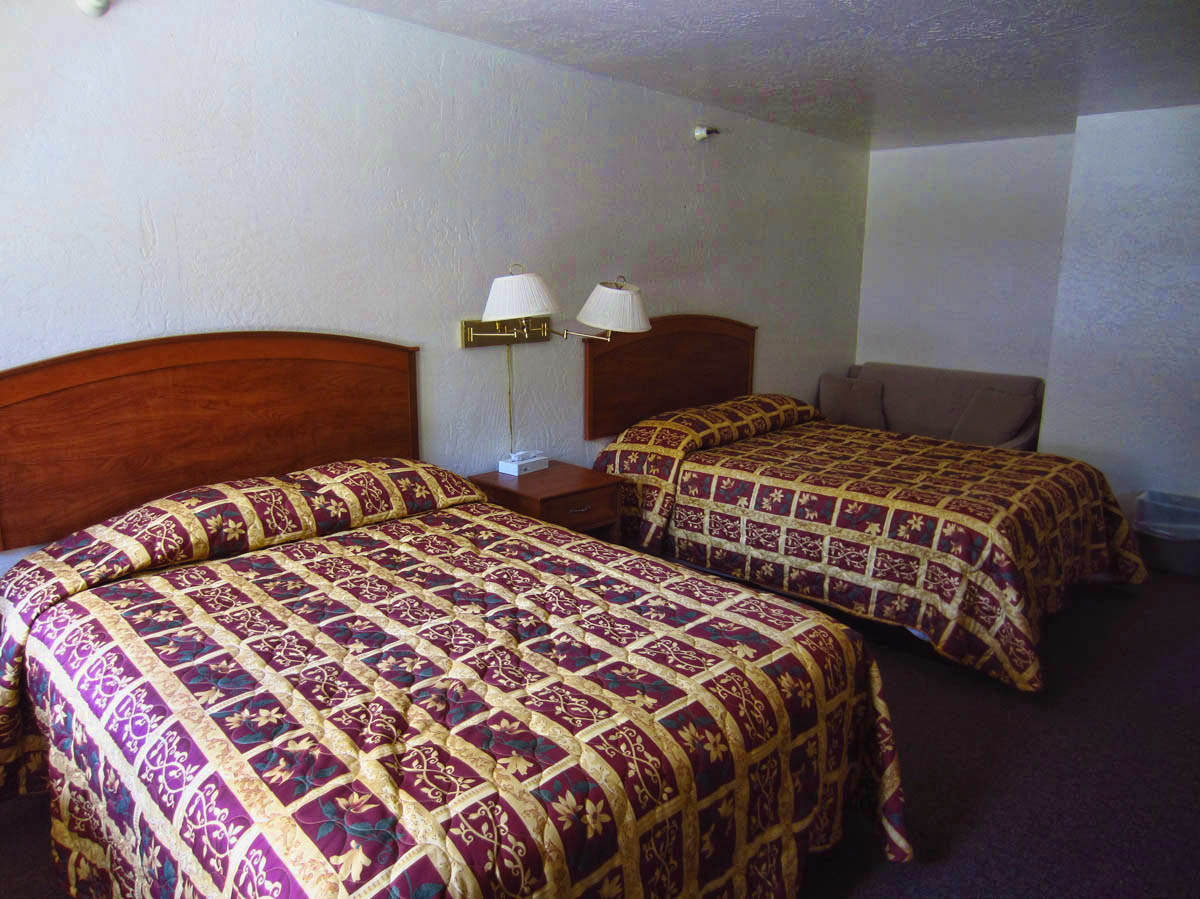 The Lodge is your basic Motel 6, only at $145 plus tax per night, but who can quibble when everything including the daily mail must come in by helicopter or horseback.  Besides, I am not here for the hospitality.  I am here for….

Next up….THE FALLS!!  (Trust me, at the risk of shameless blog promotion, you won’t want to miss this one!) 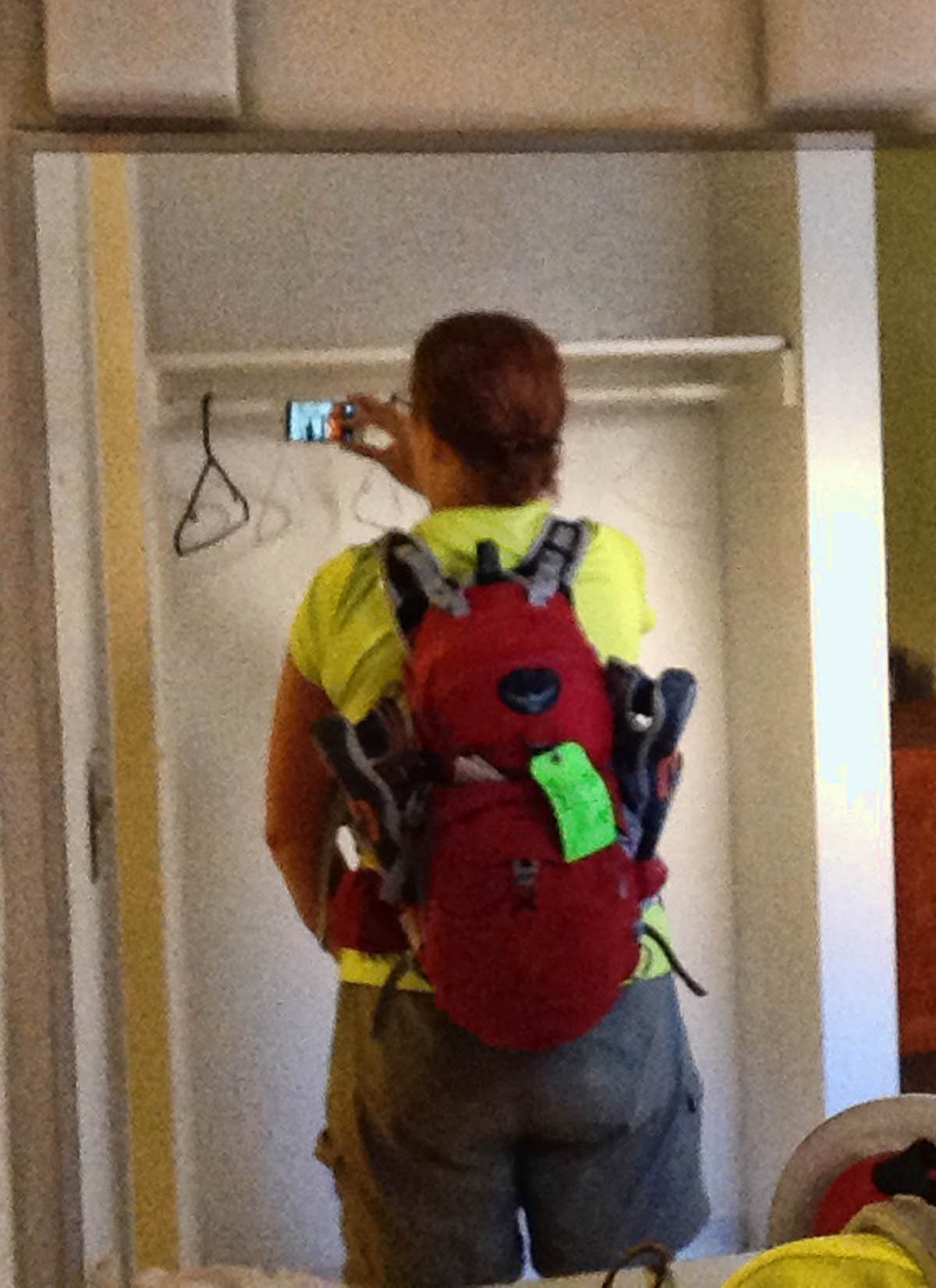 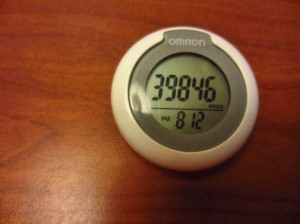 41 thoughts on “Havasupai — The Hike”