Jim and Gayle were two weeks ahead of me in San Diego. I was sitting out a hailstorm in McDowell Mountain Regional Park when Jim sent the report that “Sprouts has 88 cent blackberries, beer flows from the tap, and the streets are paved with gold here.”   It was all I could do to keep from scrapping my Topo Map course and high-tailing it to San Diego two weeks earlier than planned.

But the one story they told that intrigued me more than anything was riding their bikes to a brewery! The thought of being able to ride a bike path all the way to a brewery and back sounded like more fun than the Barrel Republic of monkeys! The bike path runs right outside Mission Bay RV Park, and once I found out this bike path also traveled along the BEACH, Jim’s comment “the streets are paved with gold” took on a whole new meaning for a beach lover like me.

I did three fun rides while in San Diego; A 16 miler with Jim and Gayle along the beach and boardwalks to the brewery and back, an 18 mile loop around the bay with Jim and Gayle, Jim (Davis) and Allison, and a nice 10 mile sunset ride with Gayle around Fiesta Island. 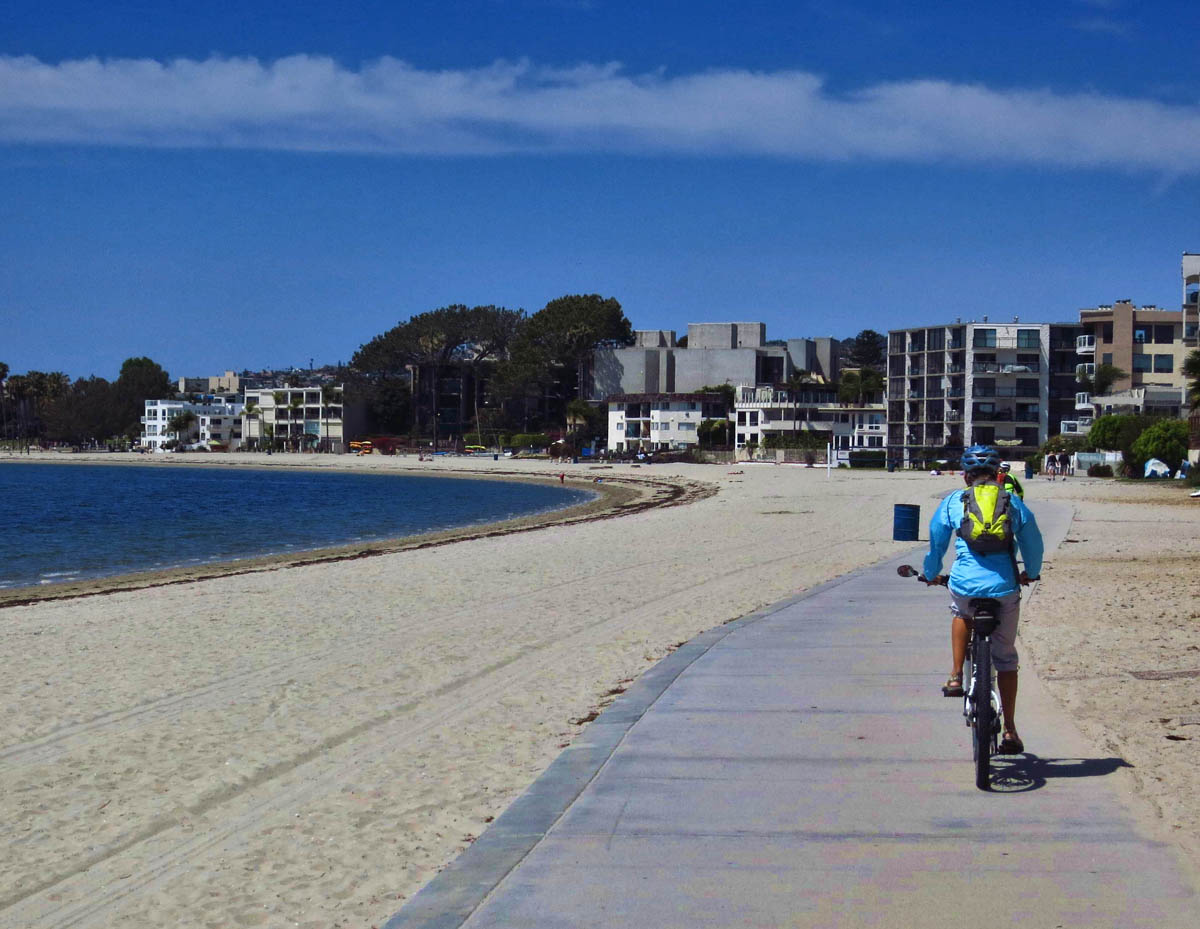 The loop around Mission Bay has some gaps, admittedly, but overall the views can’t be beat! 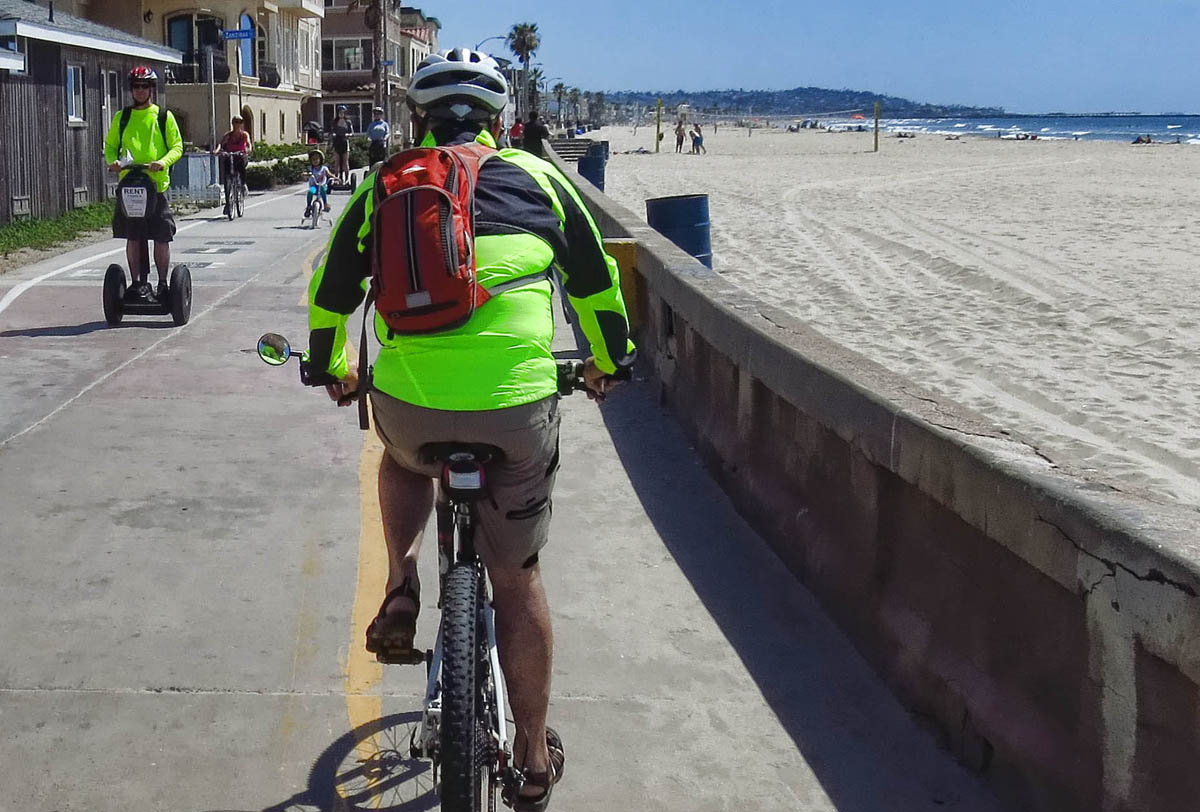 Who has right of way when meeting a Segway? 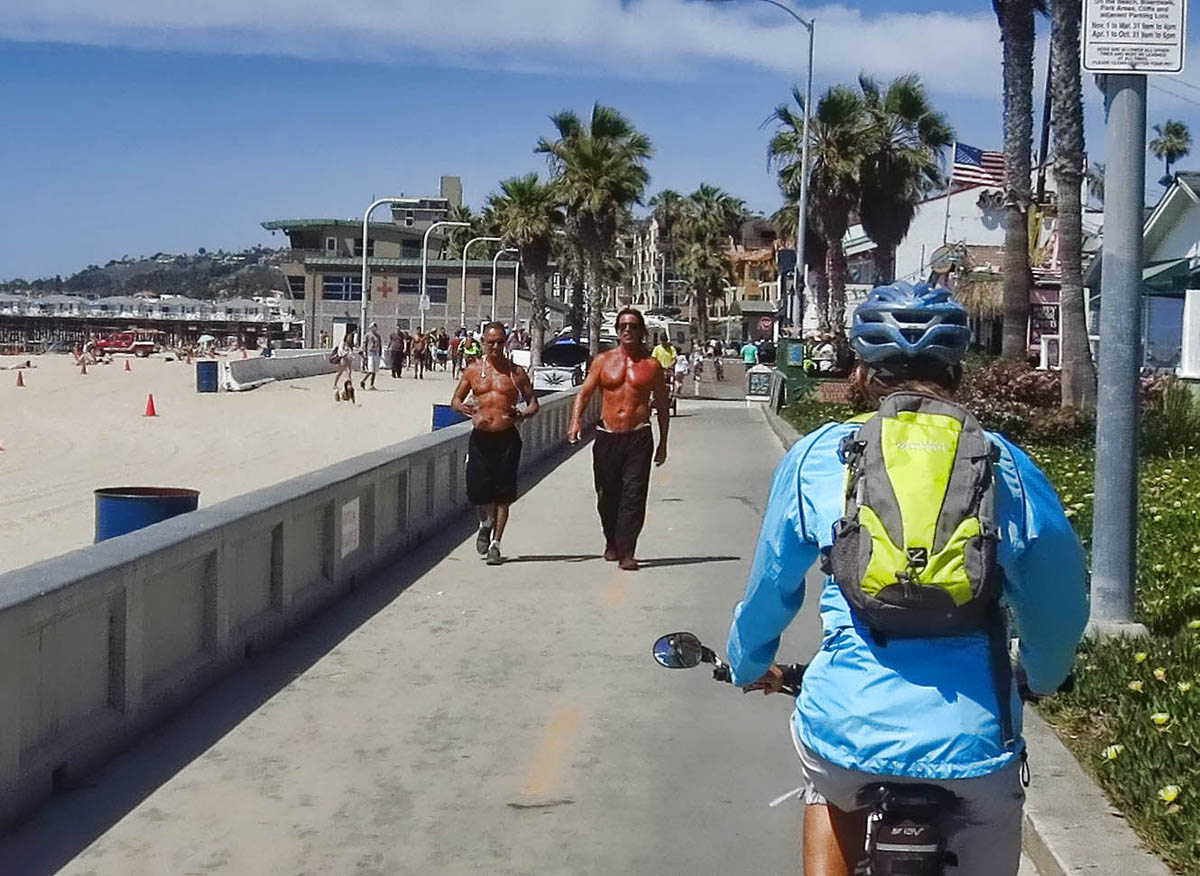 We saw these two guys at the exact same place on two different days! GET A JOB! 😉 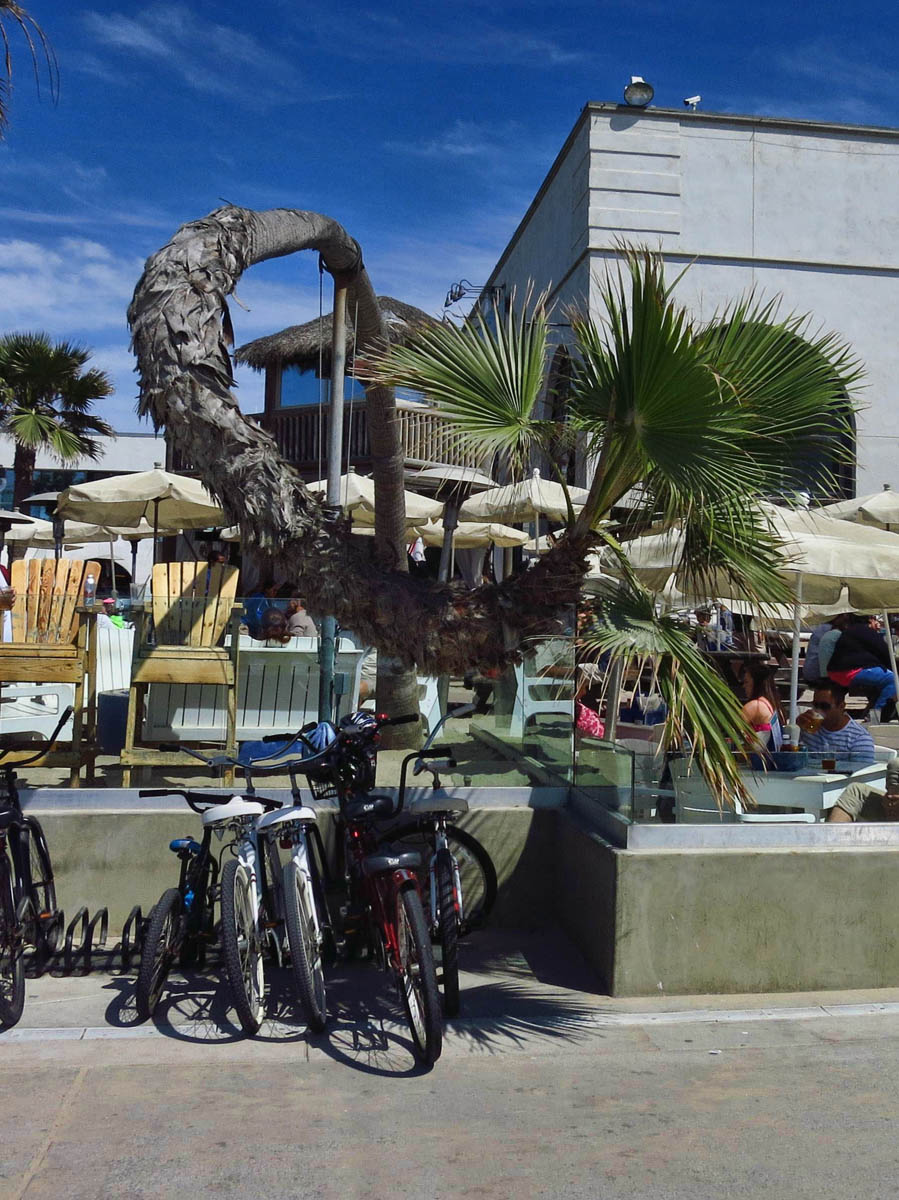 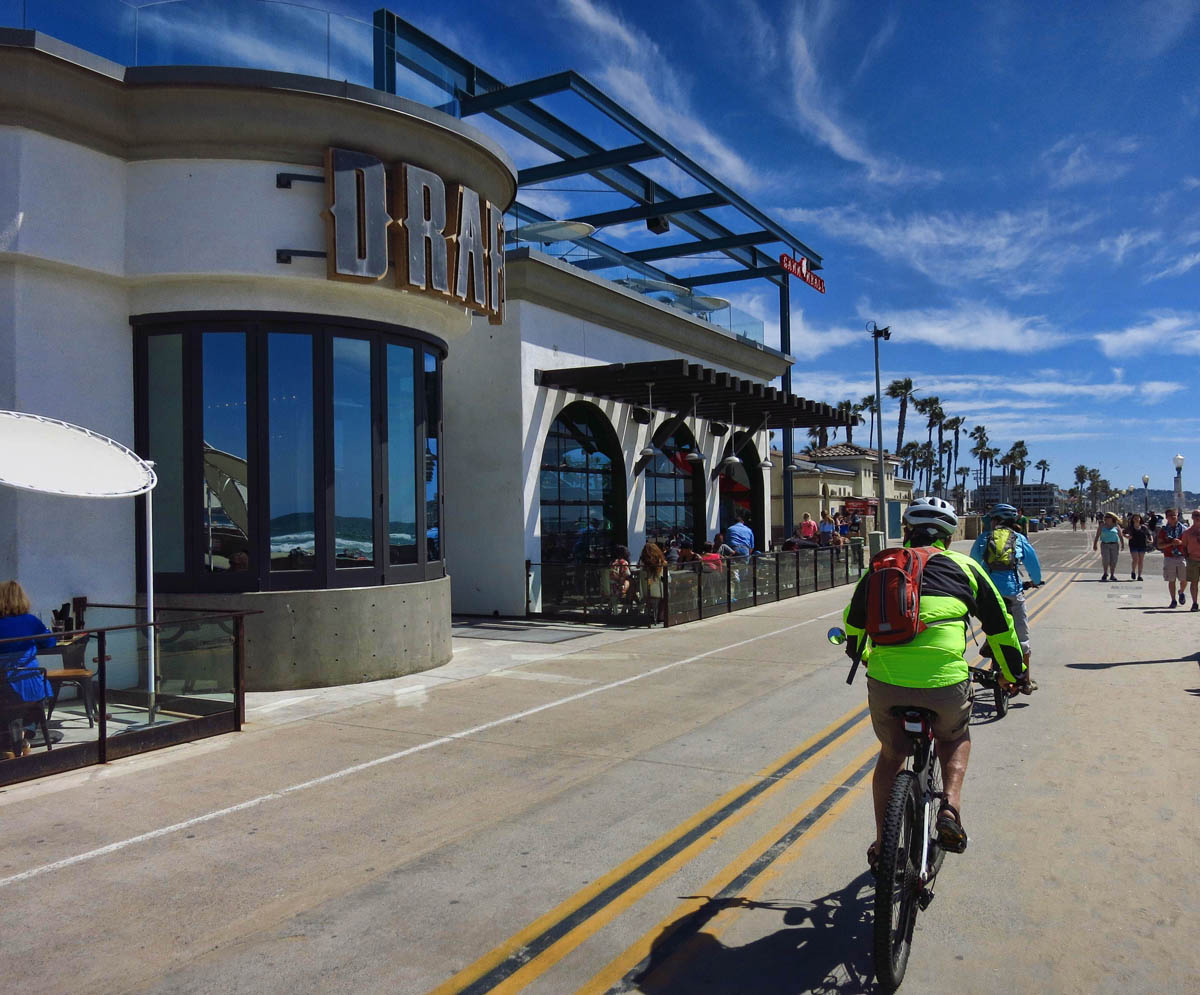 Approaching my very first “Bike to the Brewery” destination, Draft 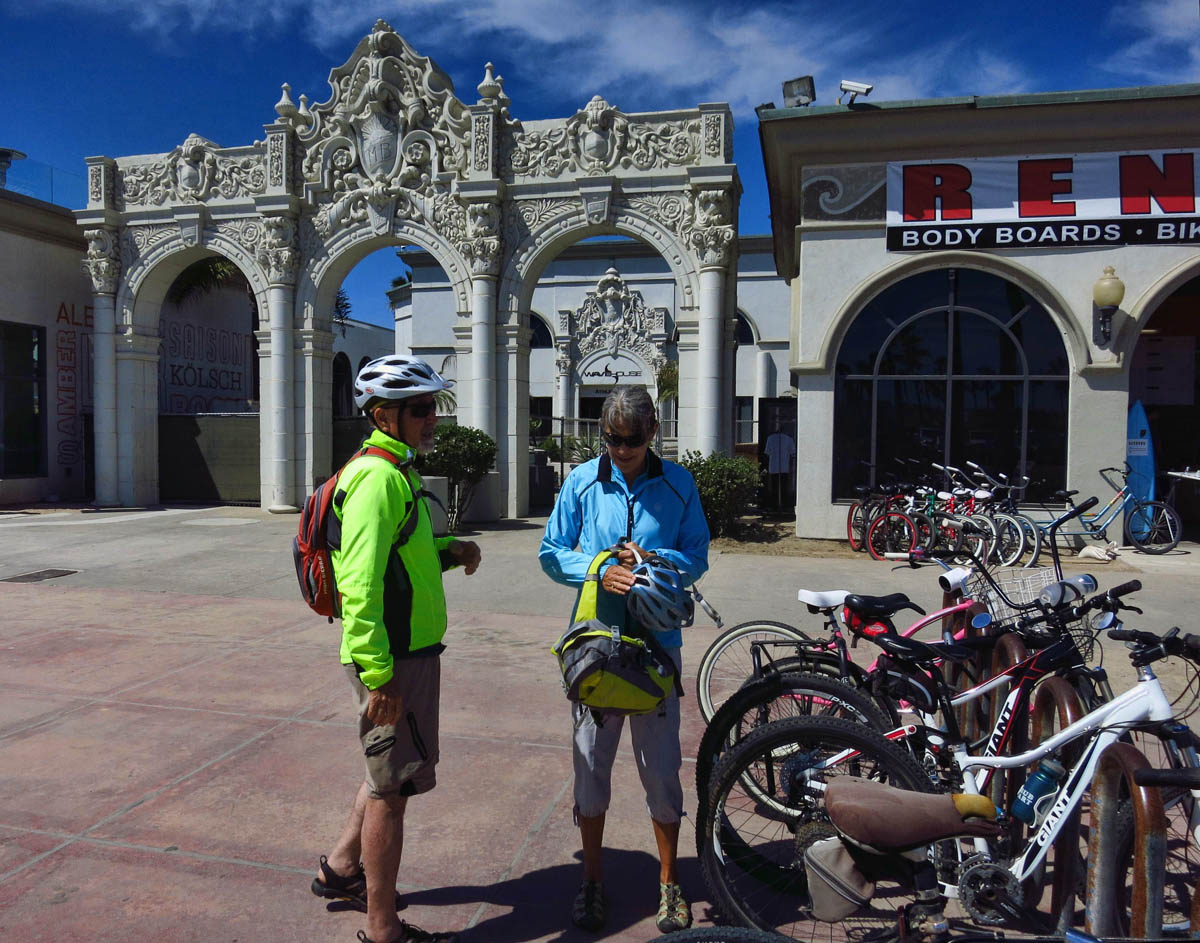 Discussing locking strategy. I don’t have to worry about such things, since the lock is worth more than my bike. 😉 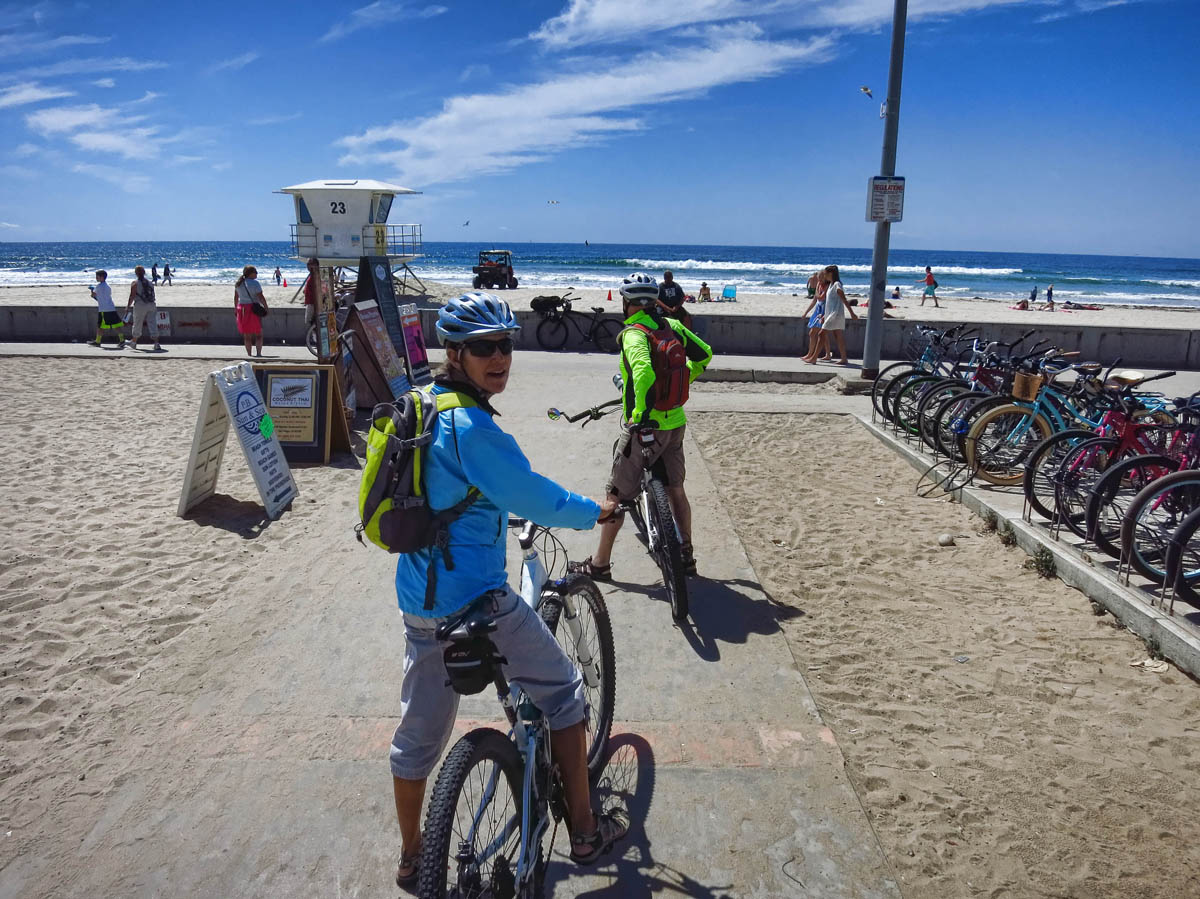 Gayle cautions as we enter the boardwalk, “Don’t get a B.U.I.!” 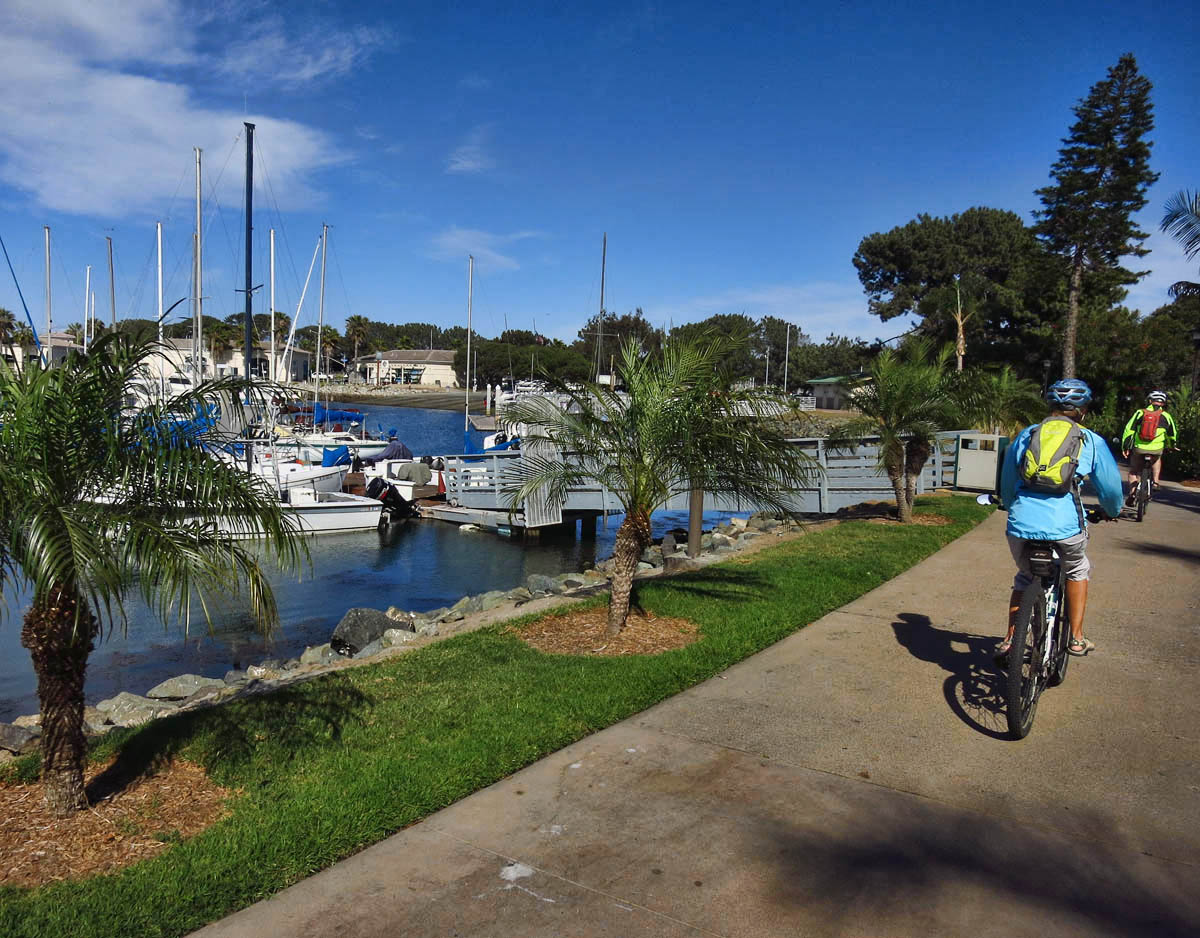 Most of the path is along the water. I loved this ride! 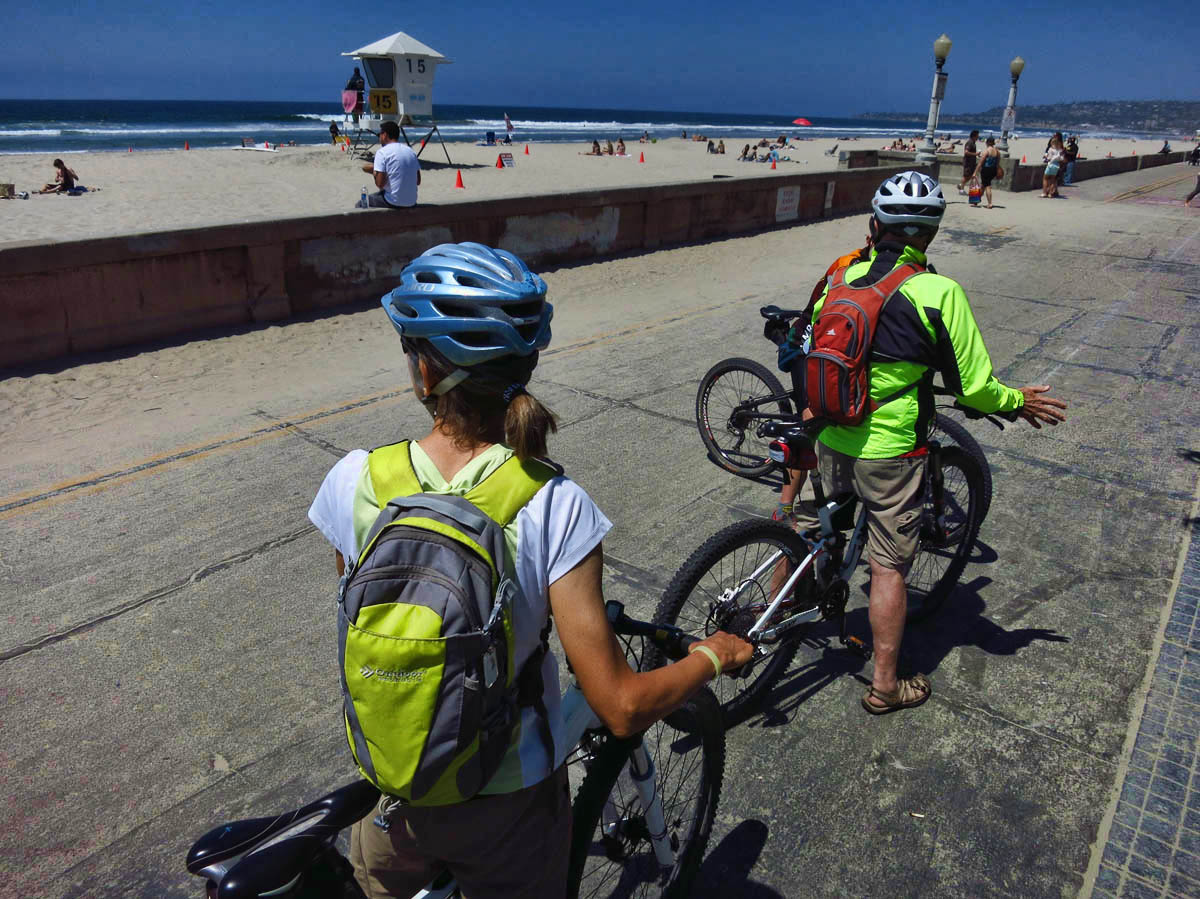 Stopping to watch the surfers… 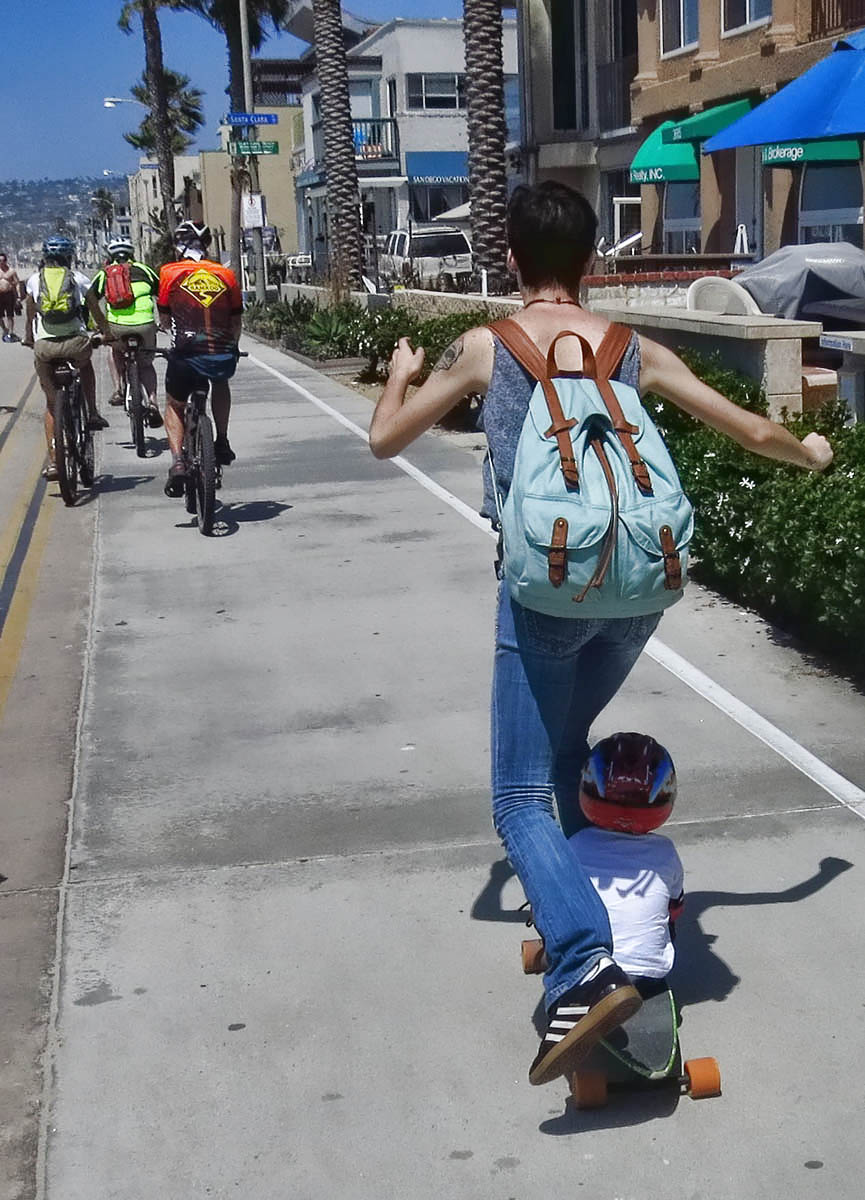 Mission Beach’s version of a baby stroller. Mom can be heard shouting, “Hug it! Hug it tight!” 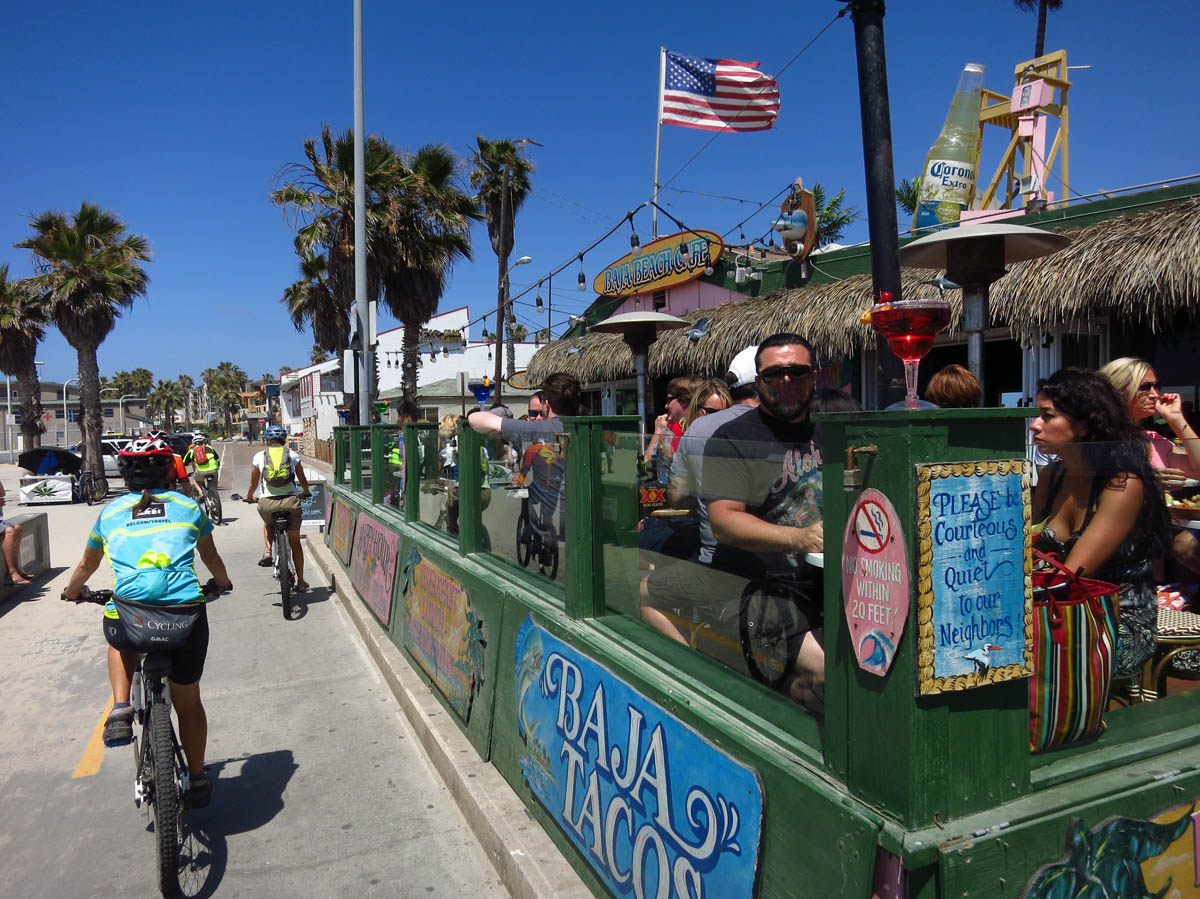 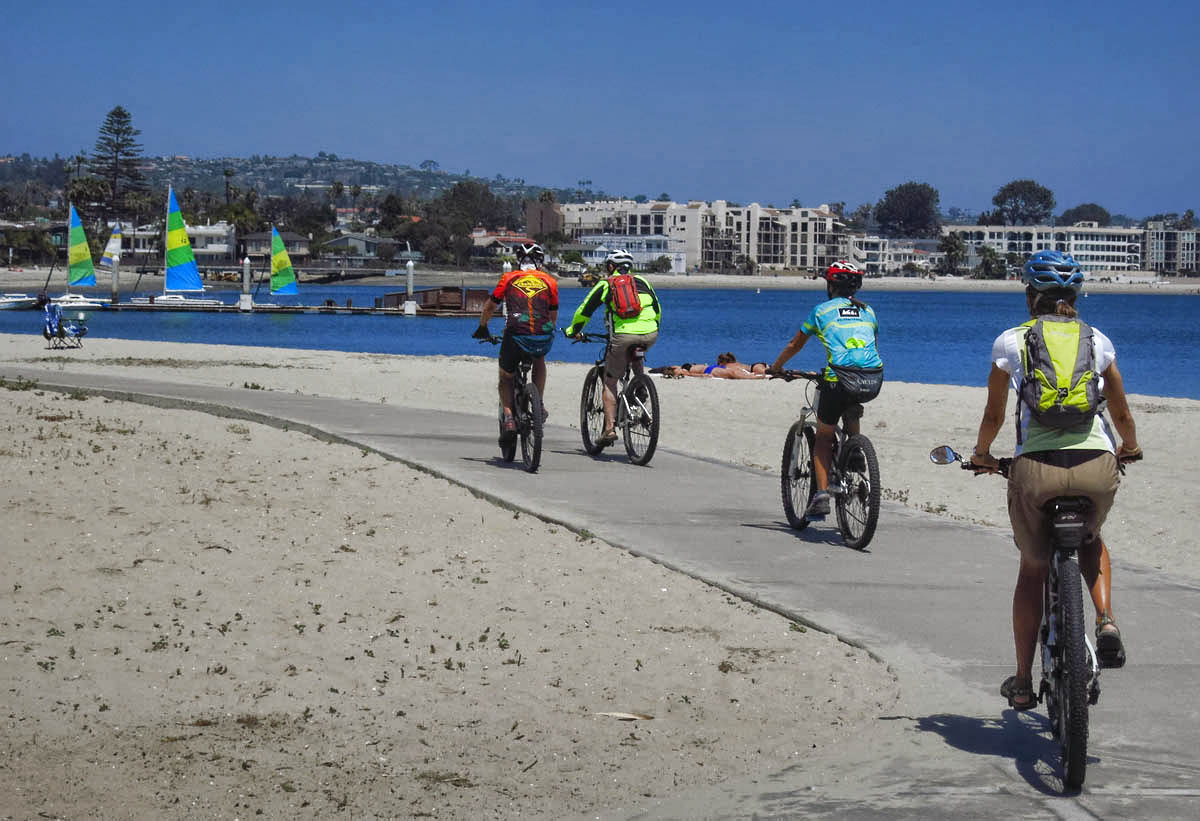 In the lead is Jim, followed by Jim, Allison, and Gayle. 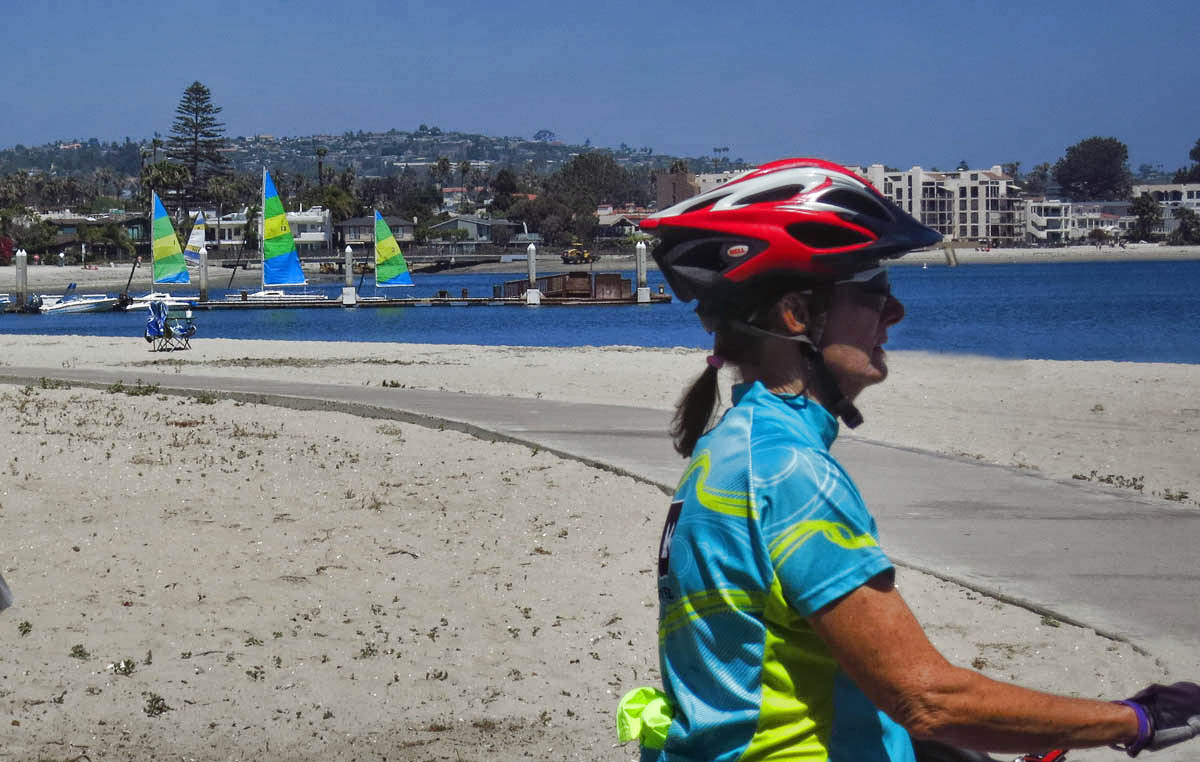 I love how Allison’s shirt matches the sails! 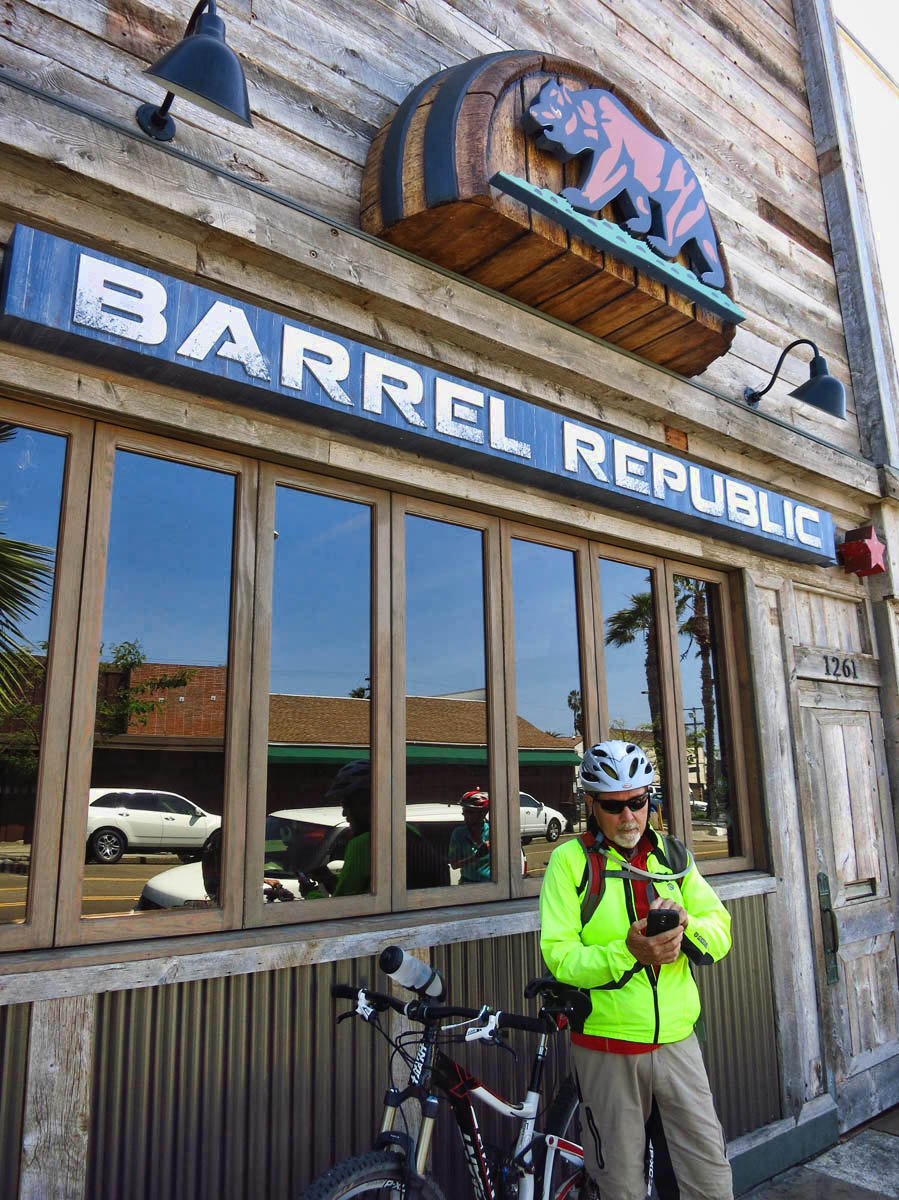 Jim checks the hours of Barrel Republic. They are closed, but “Ve’ll be baaaack!” 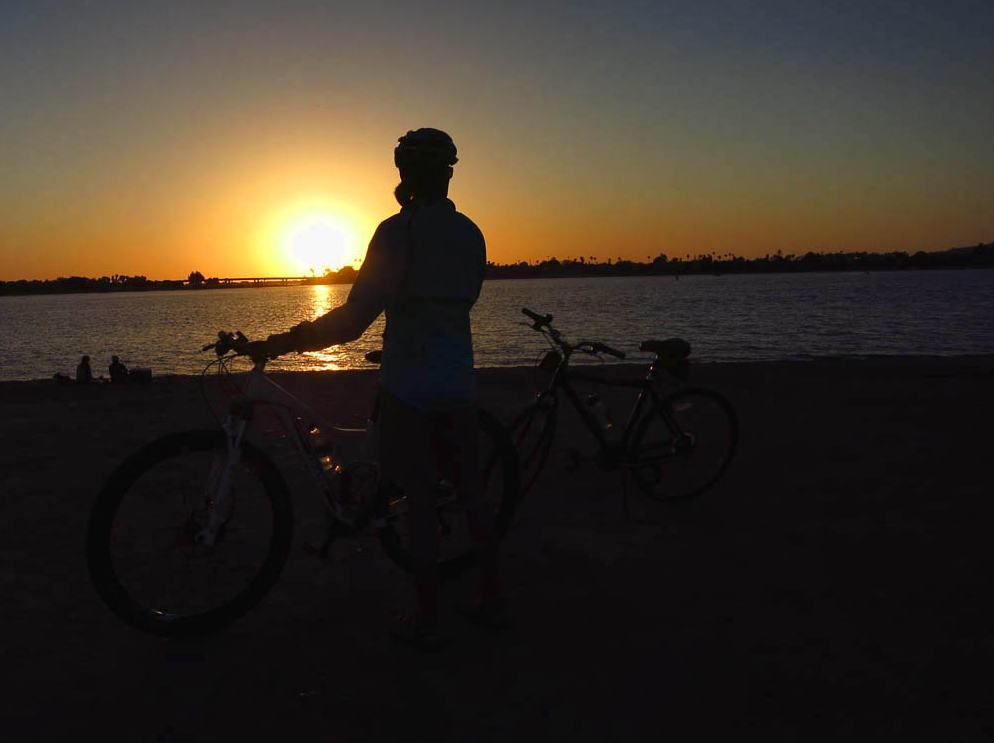 A lovely evening sunset ride with Gayle. (Me to Jim: “You don’t know what you’re missing!” Jim to Me: “I’m missing riding in the dark!”

Today’s post is paired with a selection from “Draft,” a Mission Beach boardwalk brewery that is literally right along the bike path, overlooking the Pacific Ocean. Offering “brews and views,” they have over 69 beers on tap, with another 30 brands in bottles.

It was here that I first met my one true love, Karl Strauss 26th Anniversary Bourbon-barrel aged Belgian Dark Strong Ale, the standard by which all other beers will forever be measured. 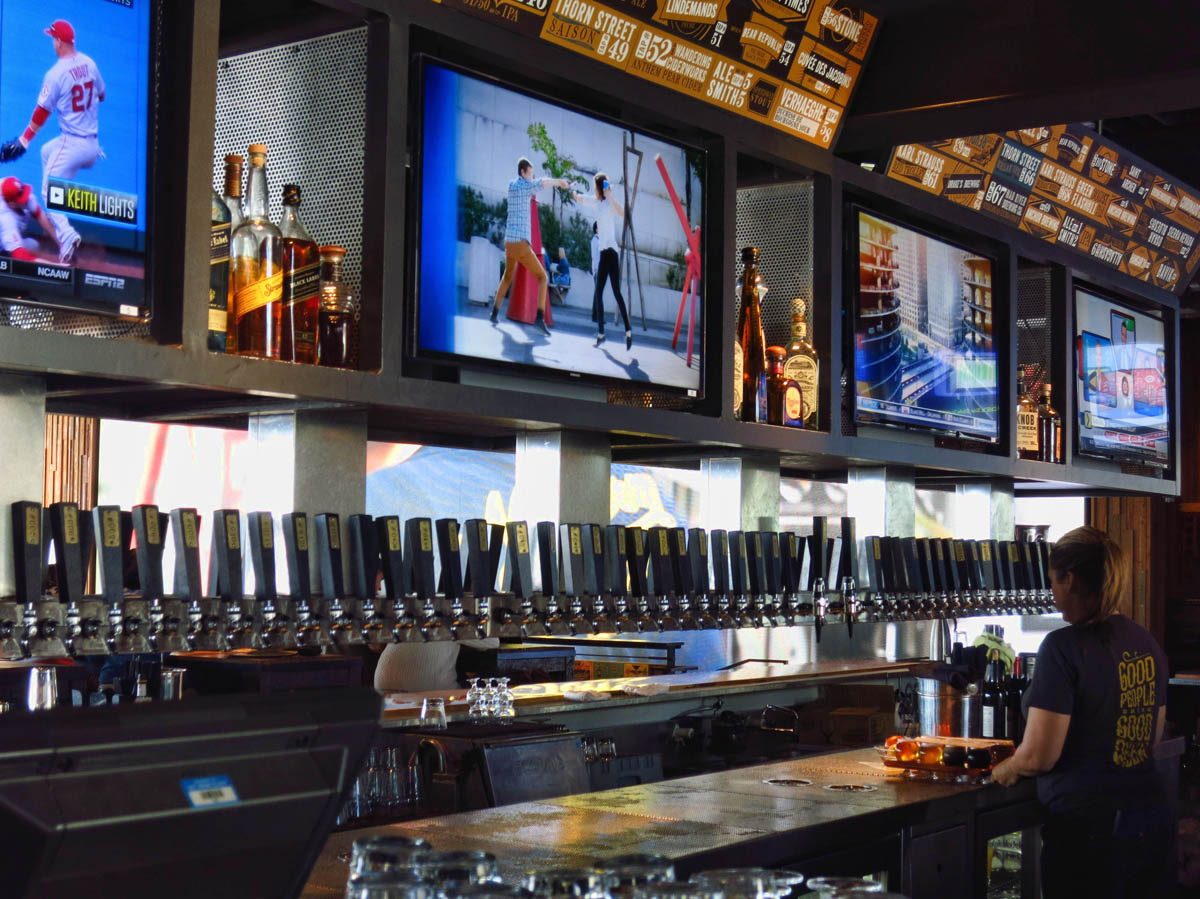 Draft on Mission Beach — 69 taps of beer on the wall! 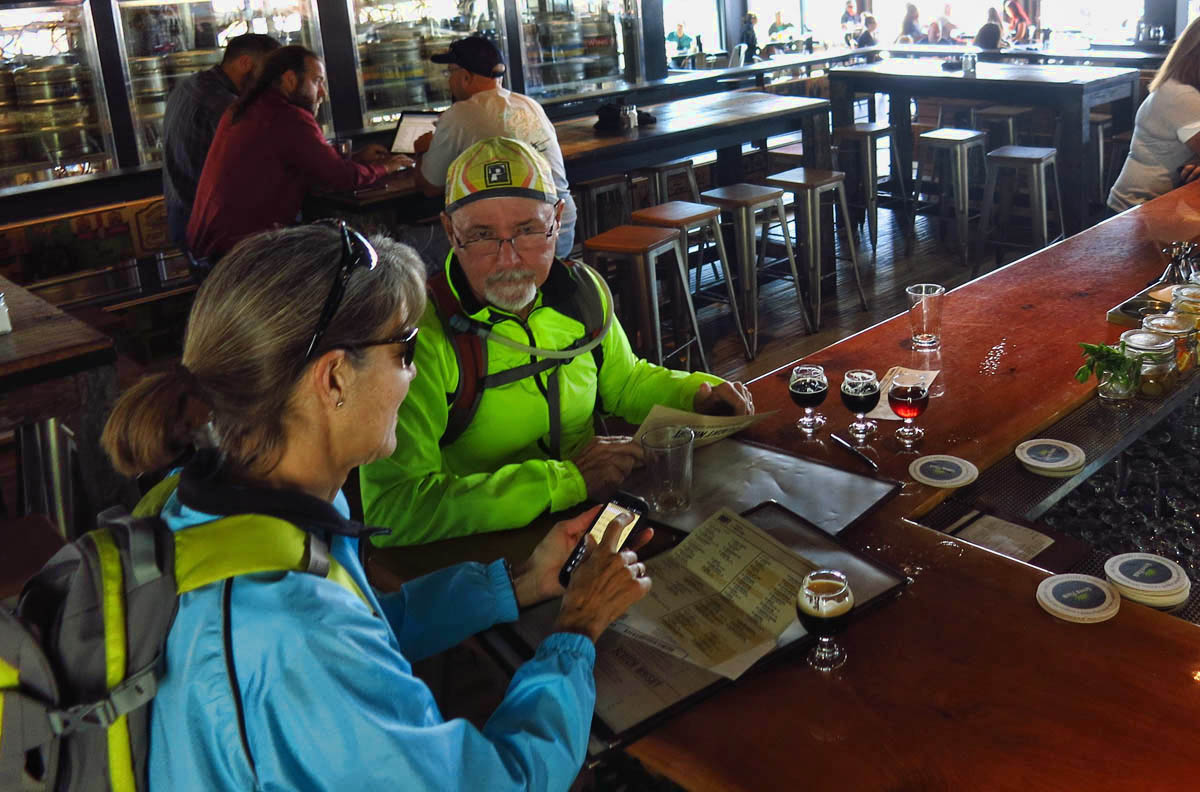 Gayle is the chronologist of beer flights. 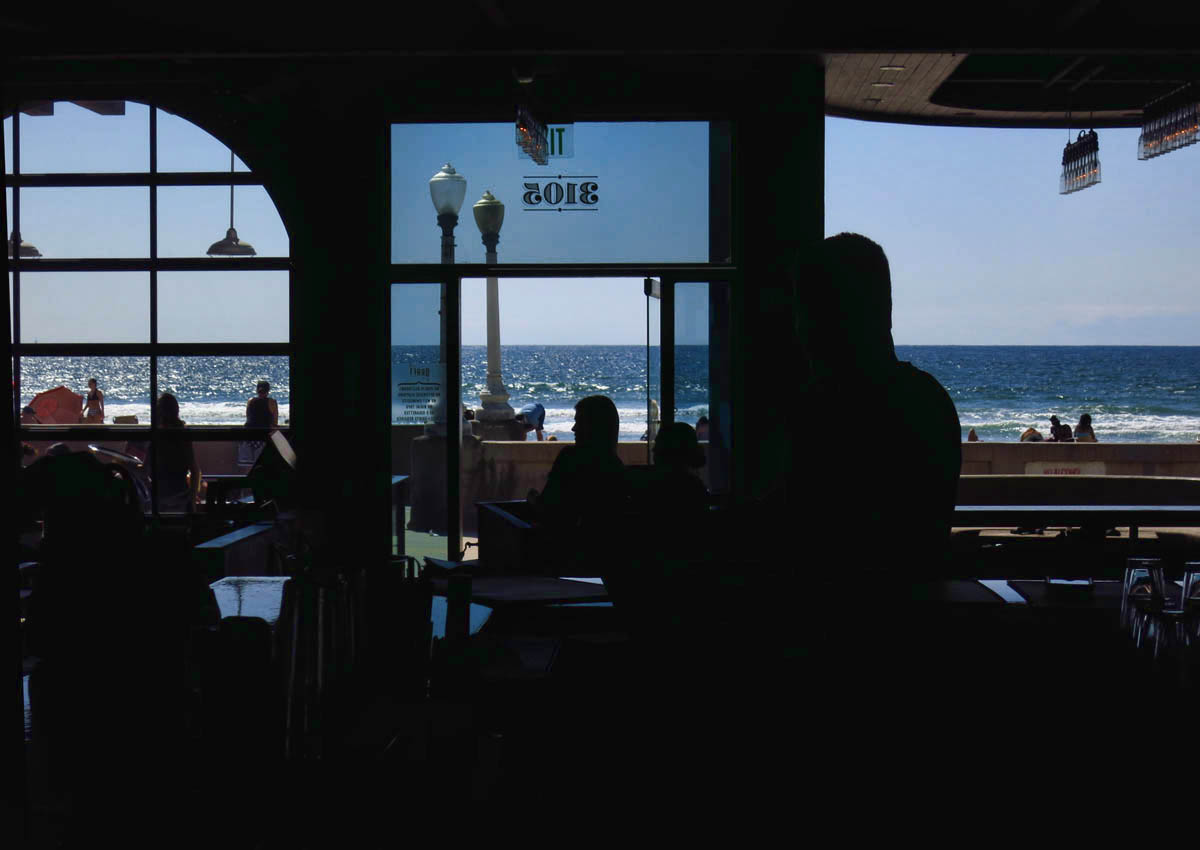 View of the Pacific Ocean from Draft’s bar.

Also noteworthy was Barrel Republic, an innovative brew pub offering “the freedom to pour.” Show your ID and swipe your credit card at the bar in exchange for a magic wristband. Wave the magic wristband above the tap to pour as little or as much as you feel like tasting, and pay by the ounce. They offer 44 beers on tap. If you can’t find at least one you like, you might be spoiled already. 😉 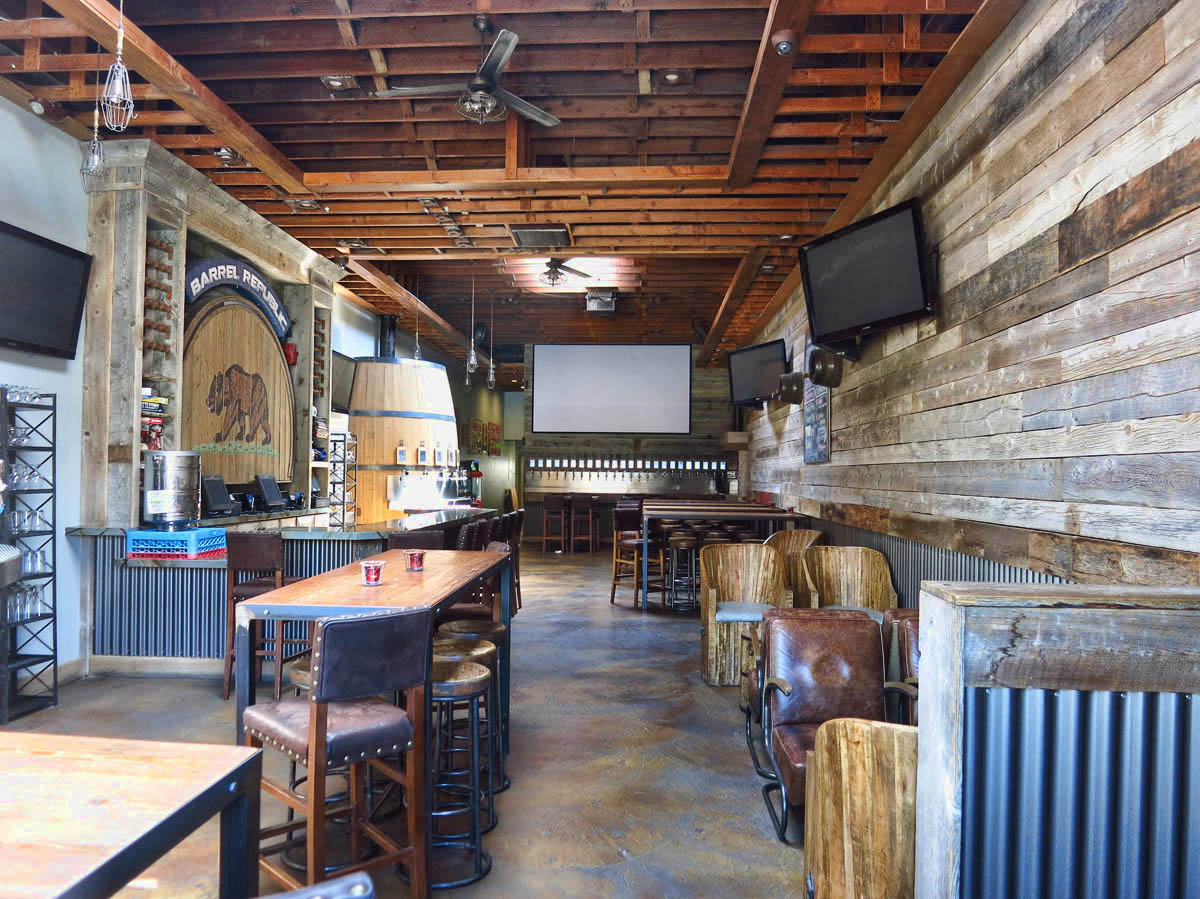 Barrel Republic….more fun than a barrel of… 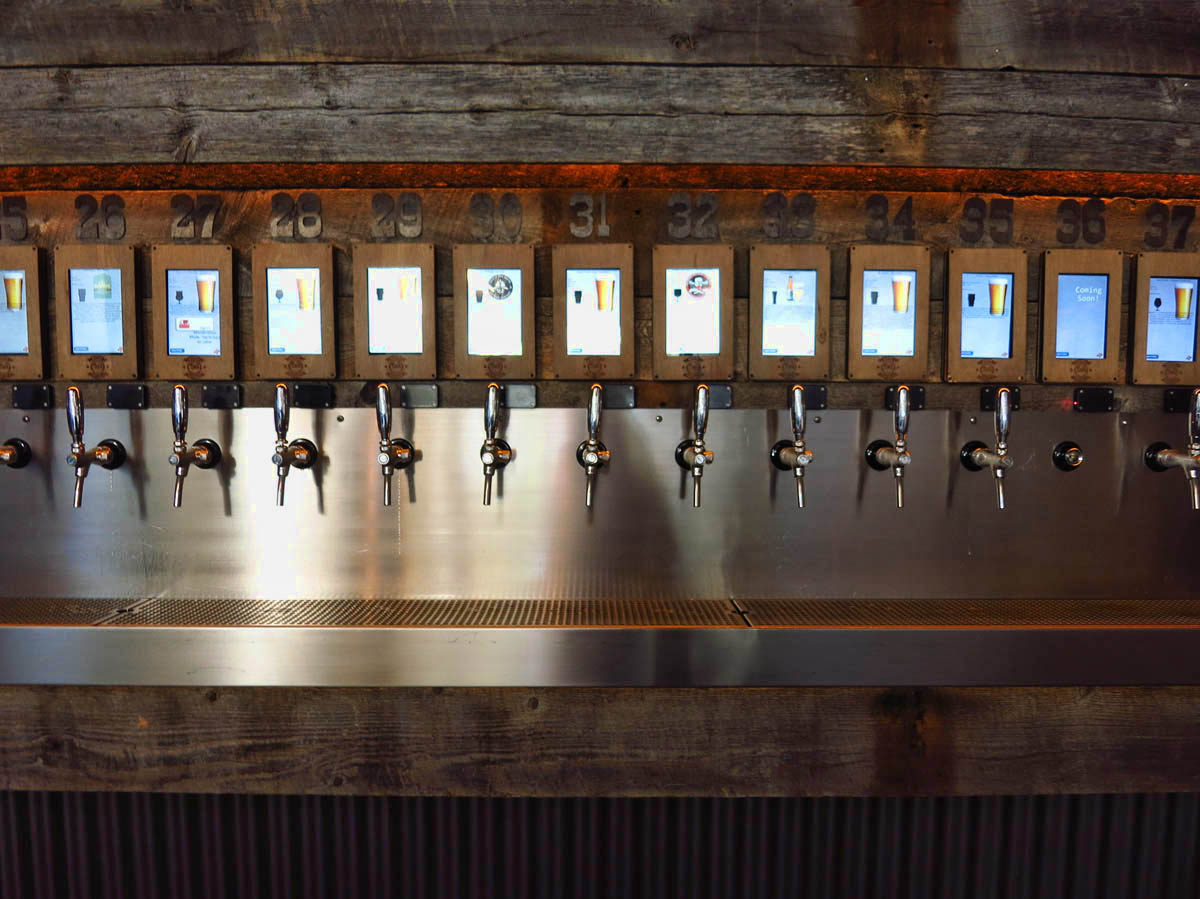 Just wave the magic wristband above the tap, and pour, pour, pour. 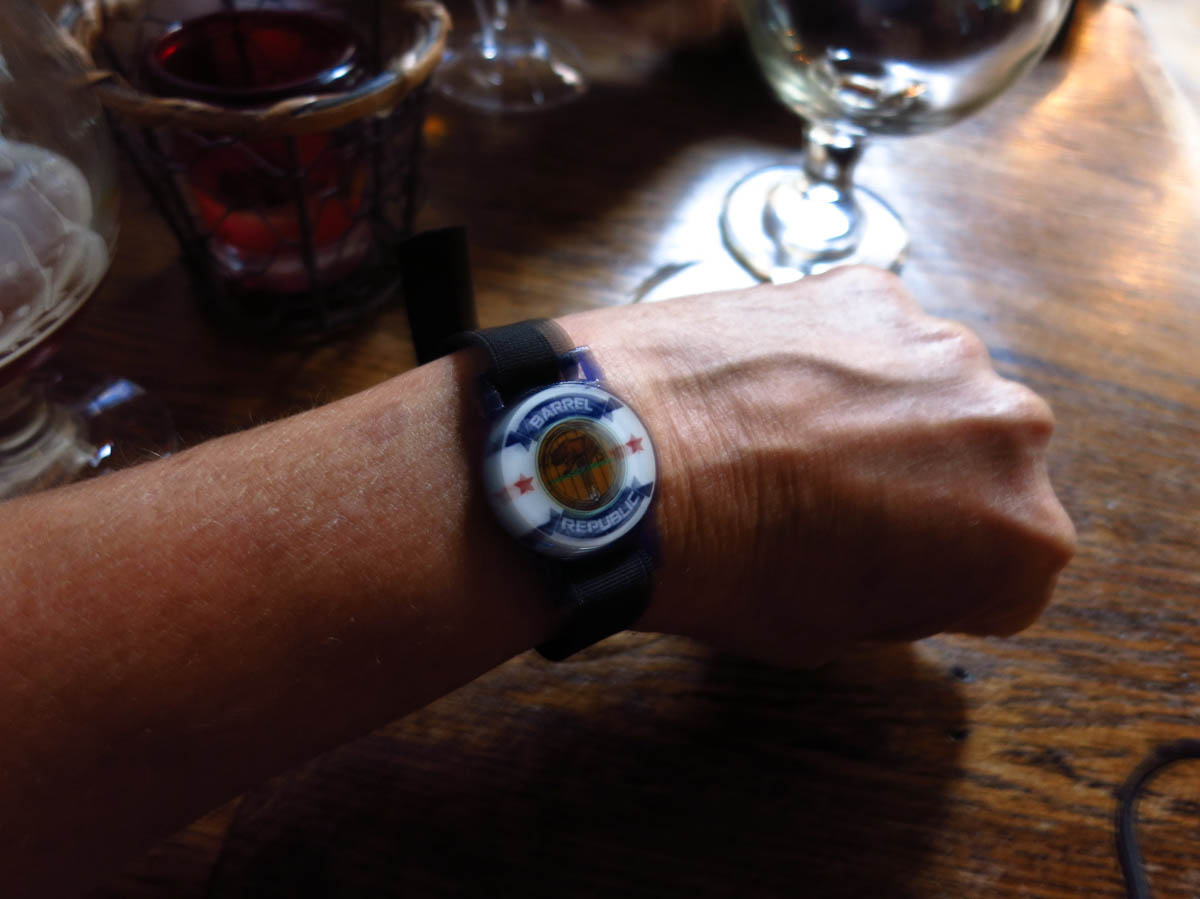 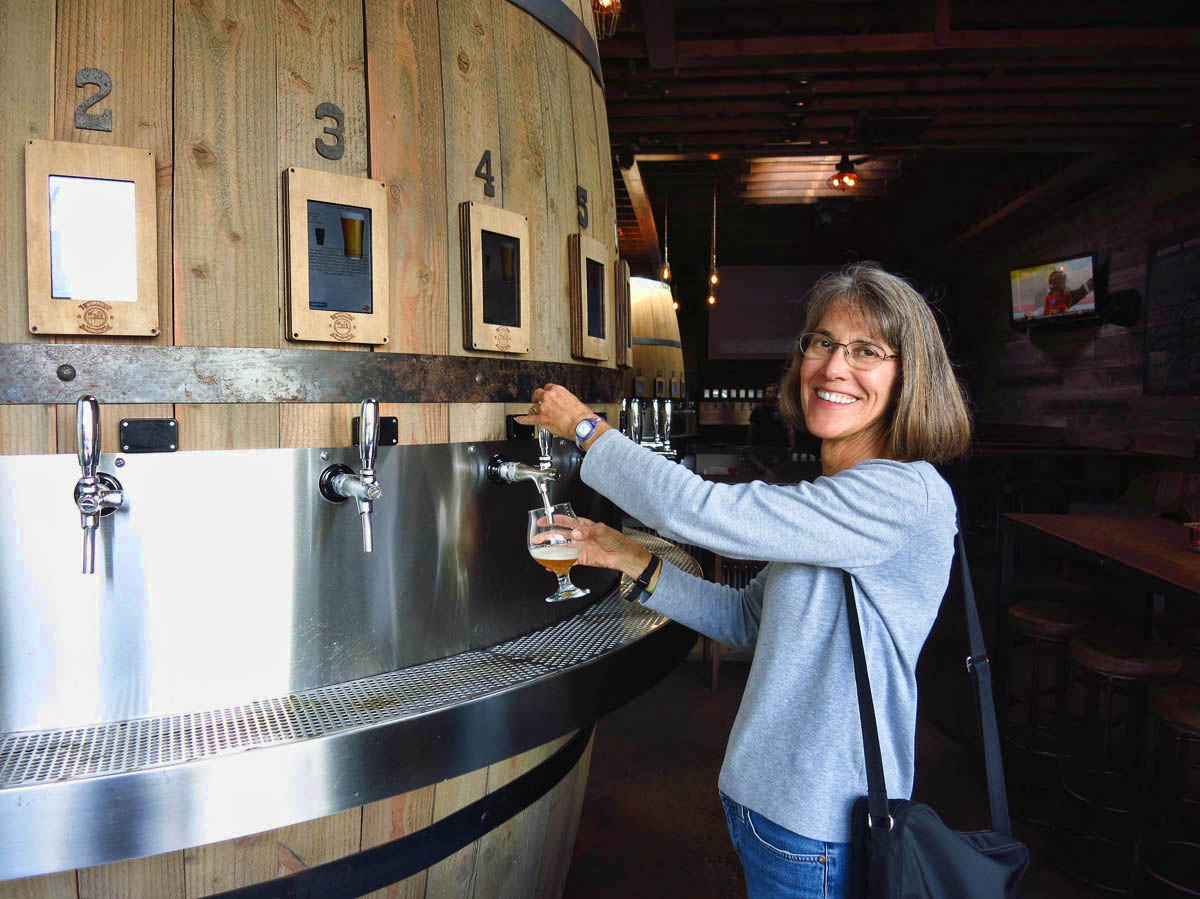 “Give me a woman who loves beer and I will conquer the world.”
~Kaiser Wilhelm