The scenery around Lovely Ouray is the type of stuff from which those hokey corporate motivational posters are made.   You know, the ones that they hang in the break room that show some fit mountain climber scaling a mountain that no corporate job would permit enough time off to drive by, let alone climb?   The kind of propaganda posters that try to reinforce that “Without pain, there is no gain?”   I have always preferred to think that reward doesn’t necessarily have to come at the hand of misery.  Ouray is proving me wrong. 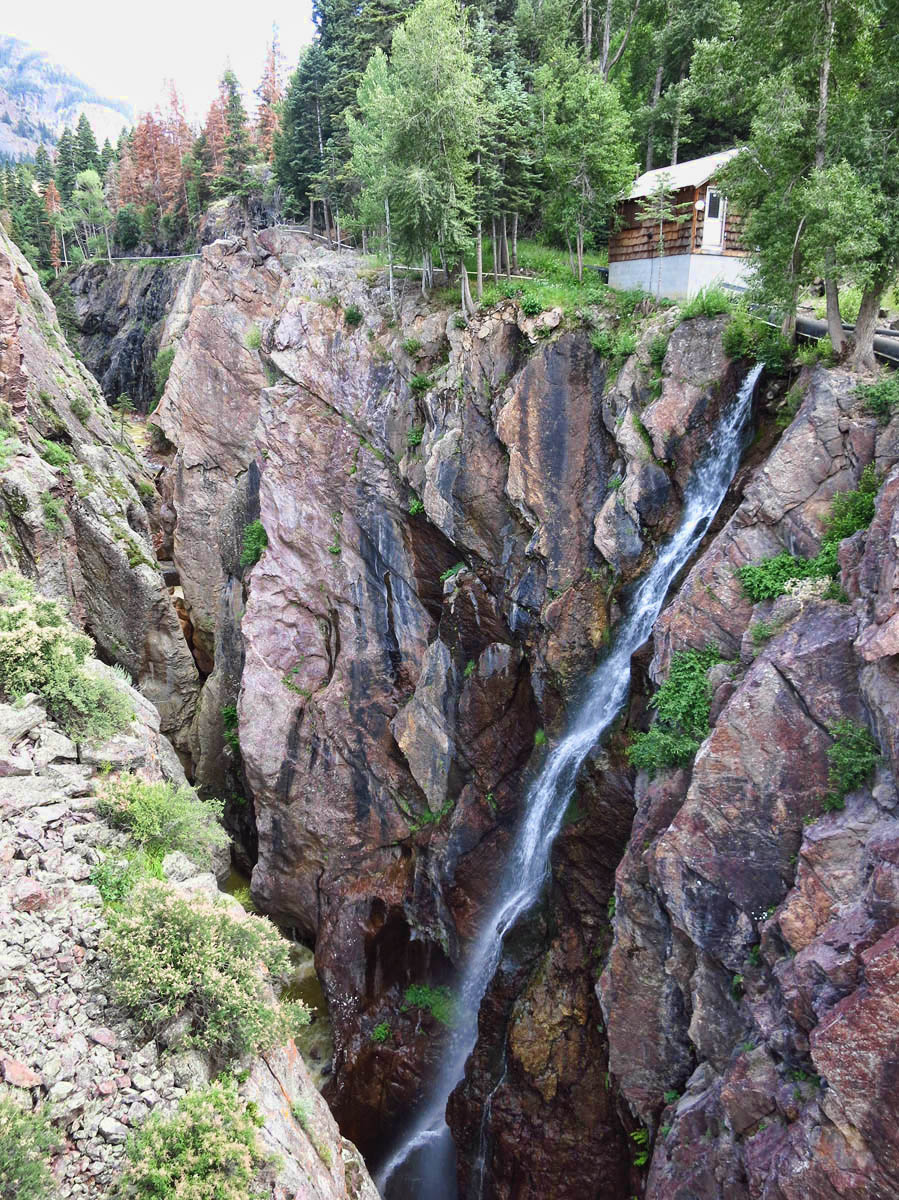 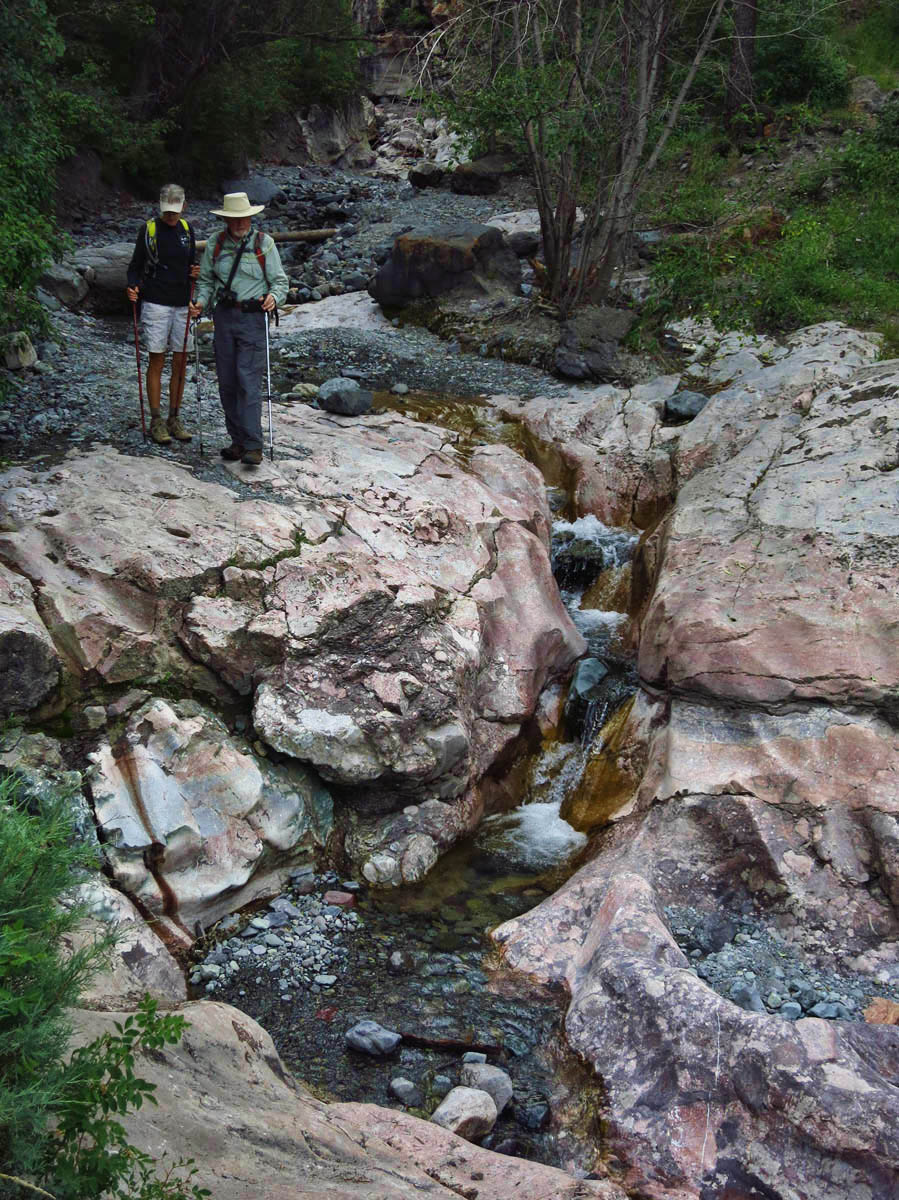 I had plenty of warning ahead of time.  Both Mark and Bobbie cautioned,  “If you’re hiking in Ouray, you are climbing.  There’s no where to go but up!.”   Sure, one can spend hours in the gym on the stair-master or the spin class, trying to get the quads in shape to carry the load.  But there really is no “getting in shape” for the lungs of a flat-lander like me who struggles to climb the sea level steps to the boardwalk at the beach.  How long does it take here until breathing doesn’t turn into heaving? 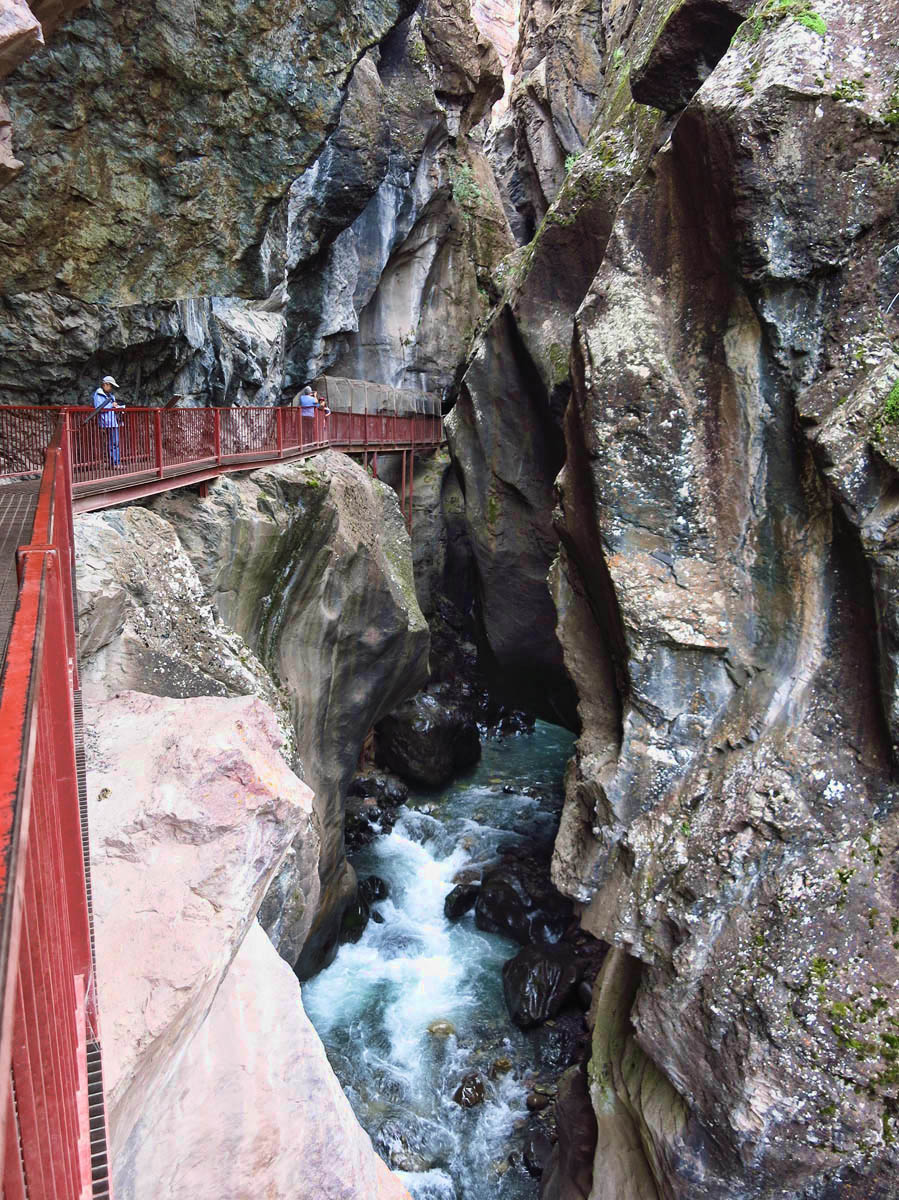 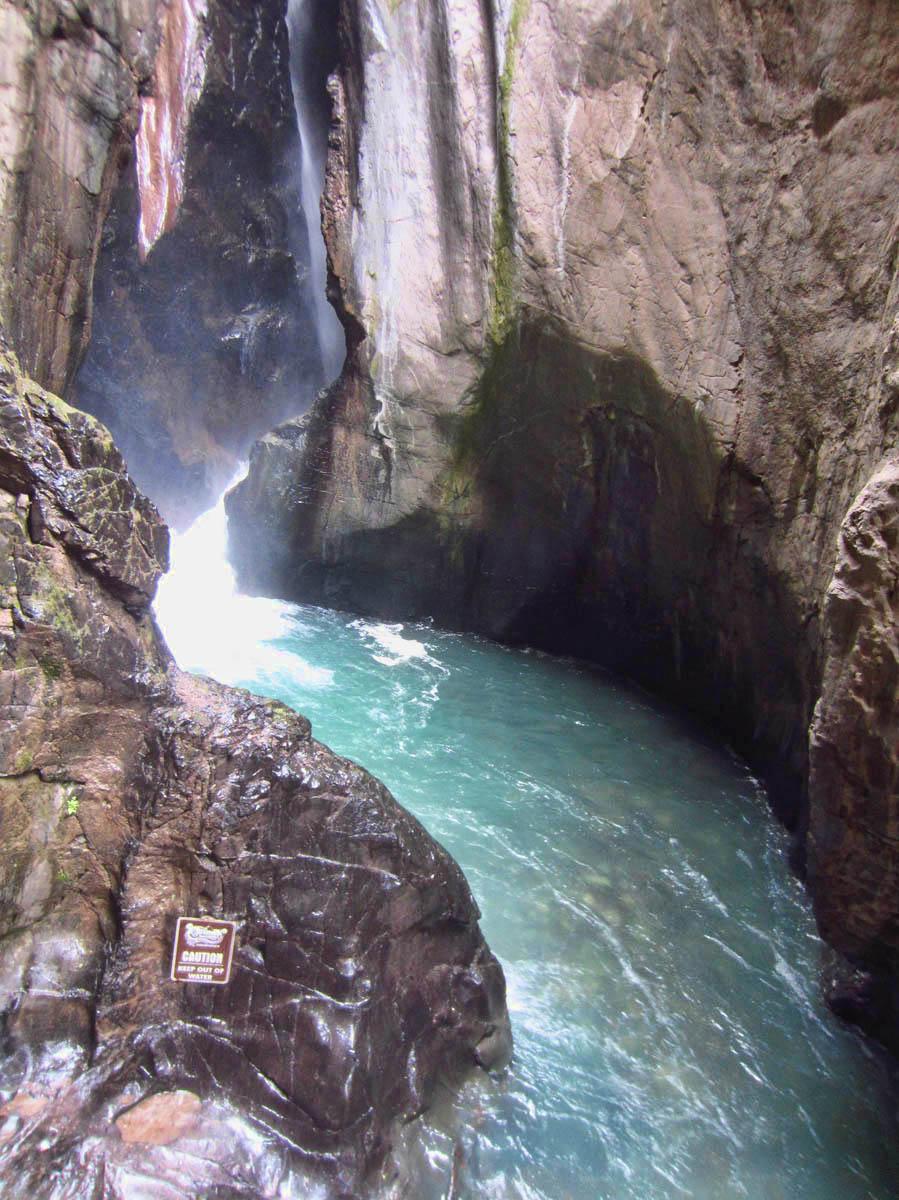 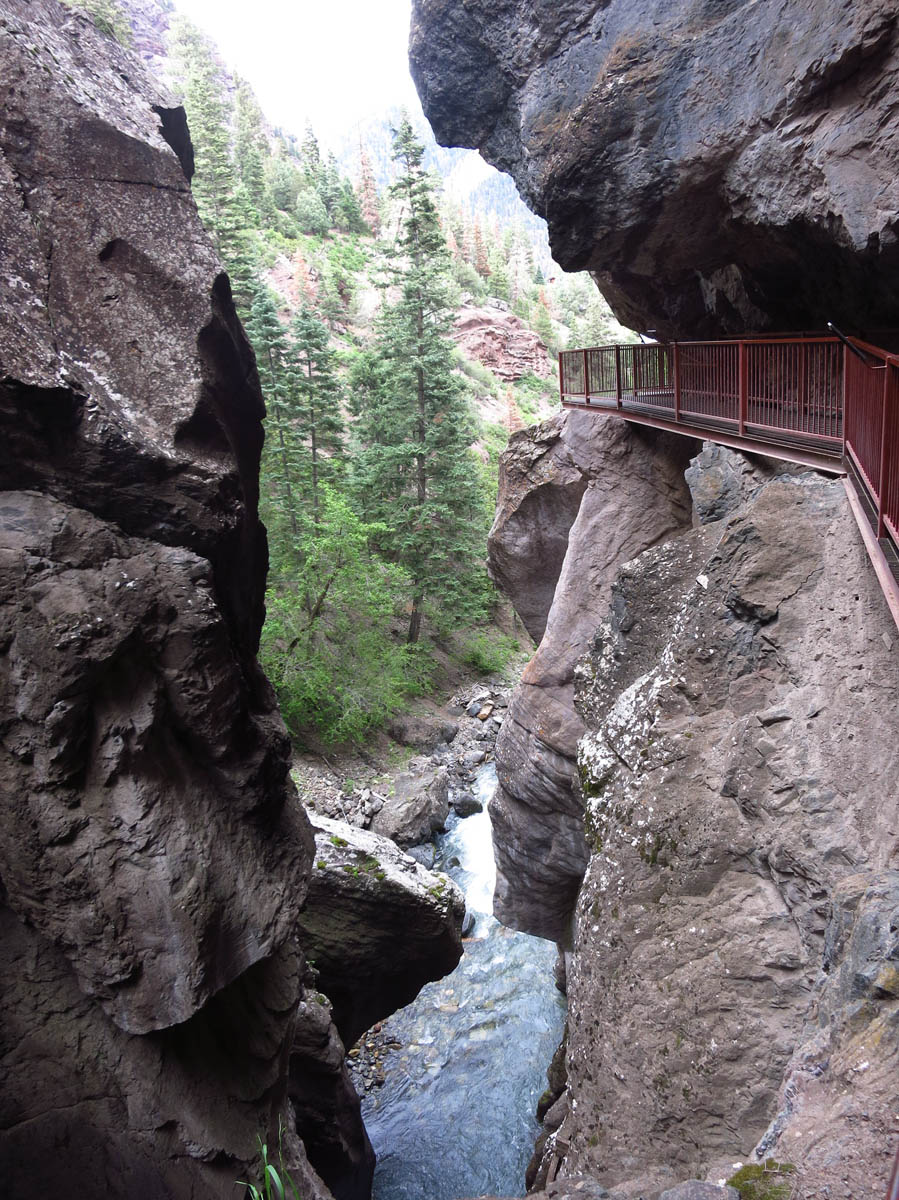 Jim and Gayle, Debbie and I headed up the Oak Creek trail, another acclimatization hike recommended by Mark and Bobbie.   It’s one of the hikes on their daily rotation that they knock out before breakfast. 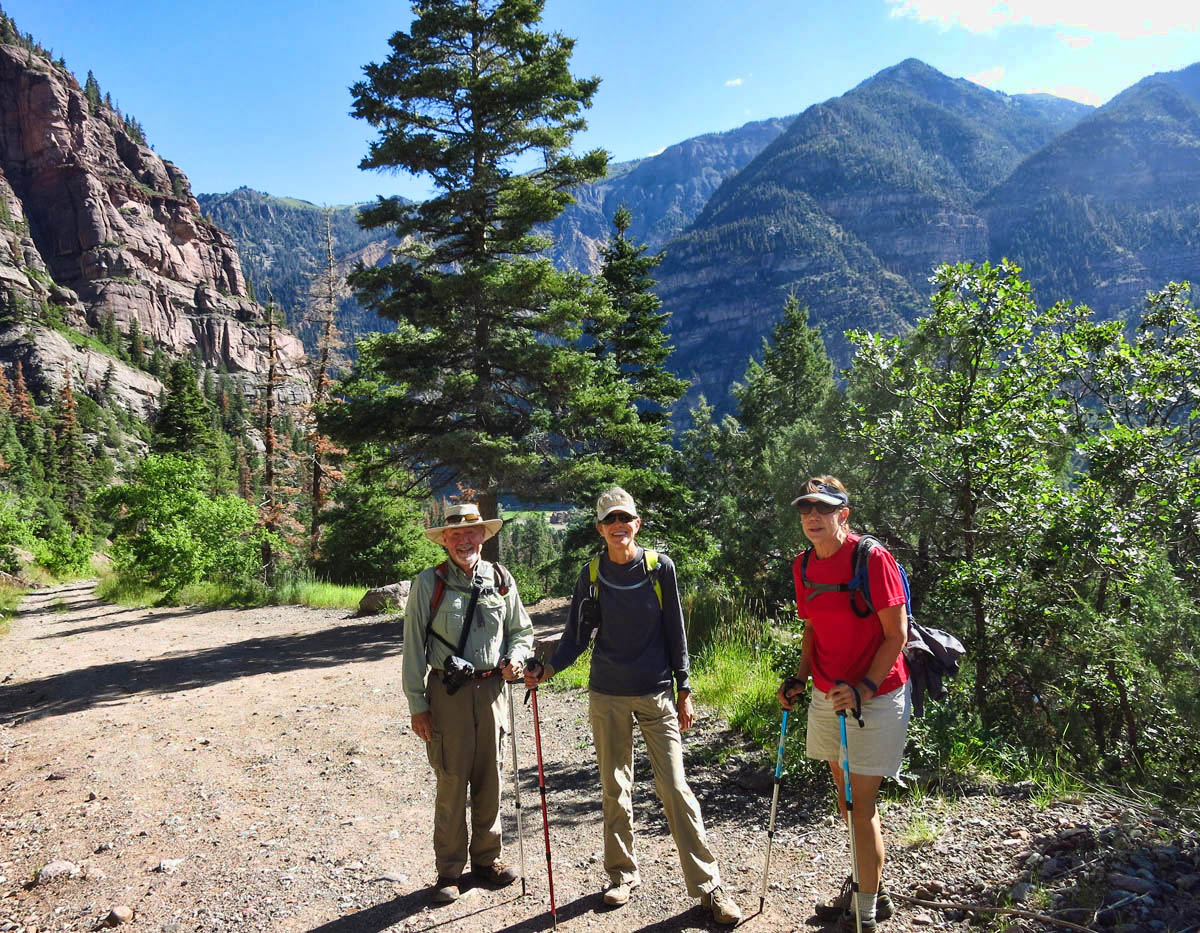 We need a rest just looking for the trail head. 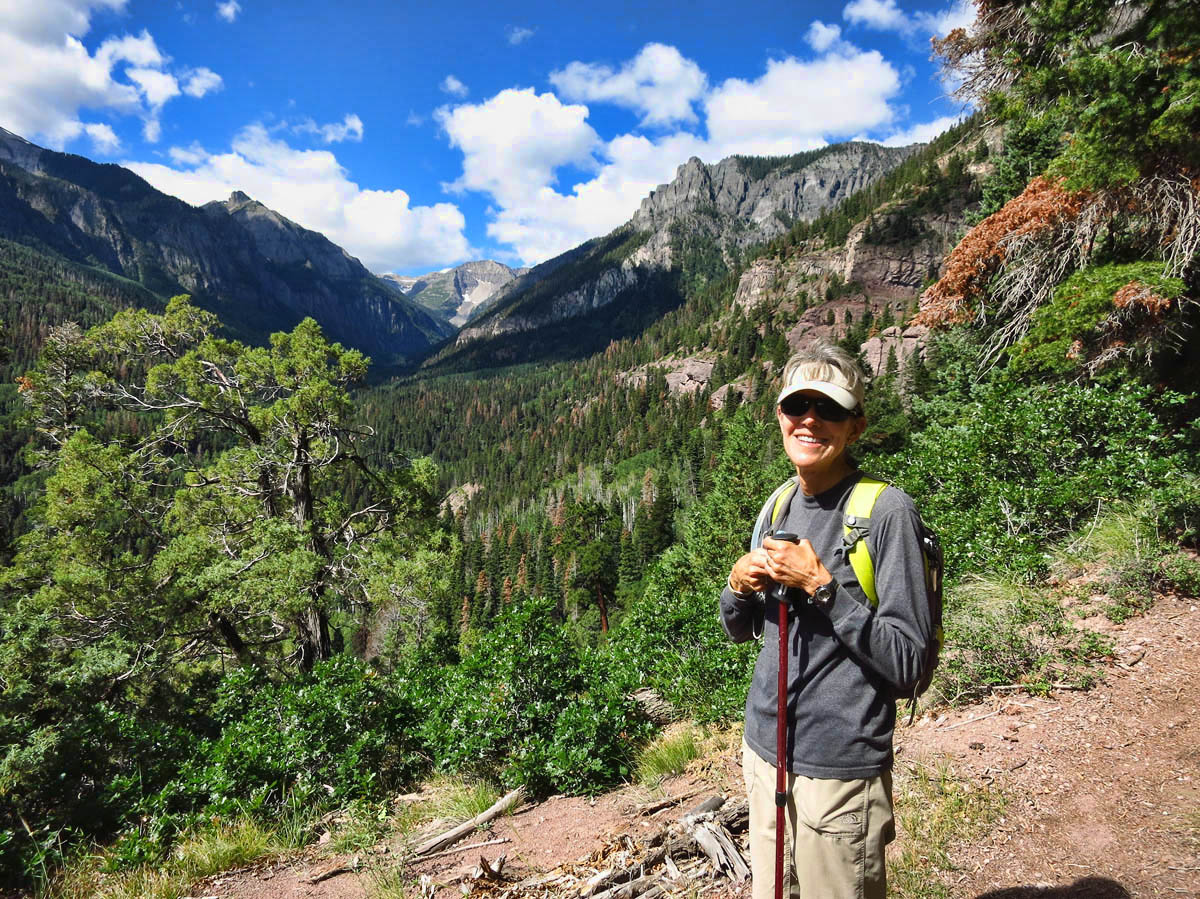 Gayle agrees with me, the views are “gain” enough! 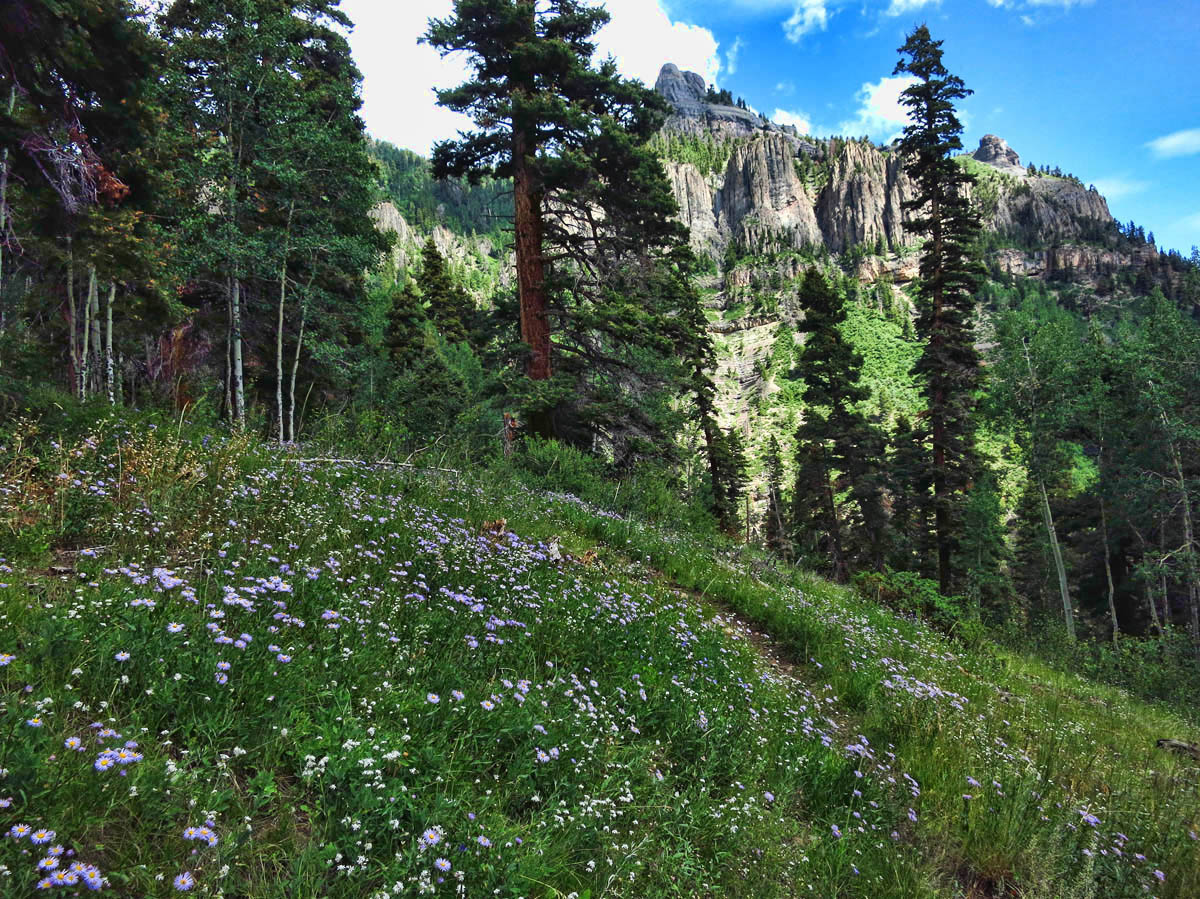 We begin up a series of arduous switchbacks, until we reach the trail marker indicating the junction with the Twin Peaks trail.   All four gasping for breath, we check our GPS and Backcountry Navigator applications, thinking this simply can’t be right.   We have been climbing for what feels like two hours.  How can it be that we have only been one mile? 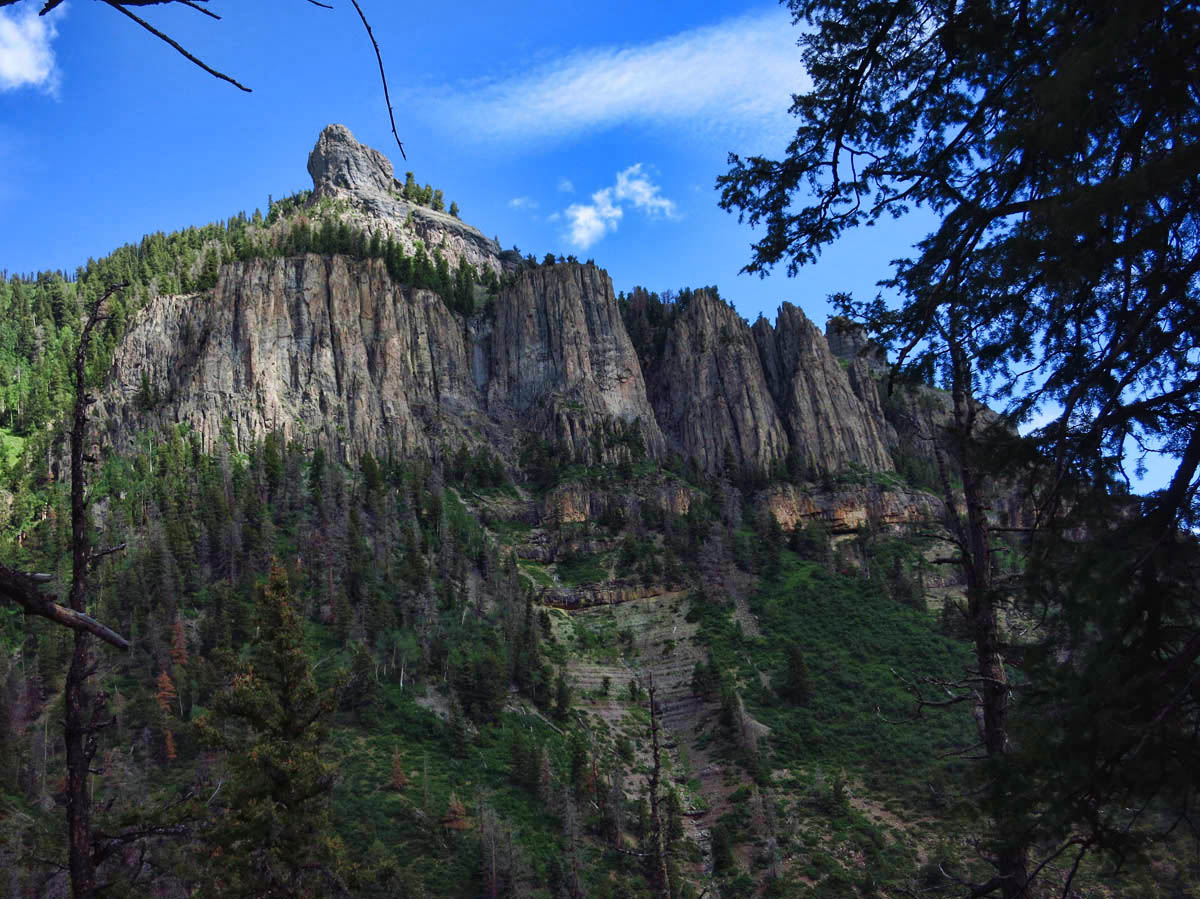 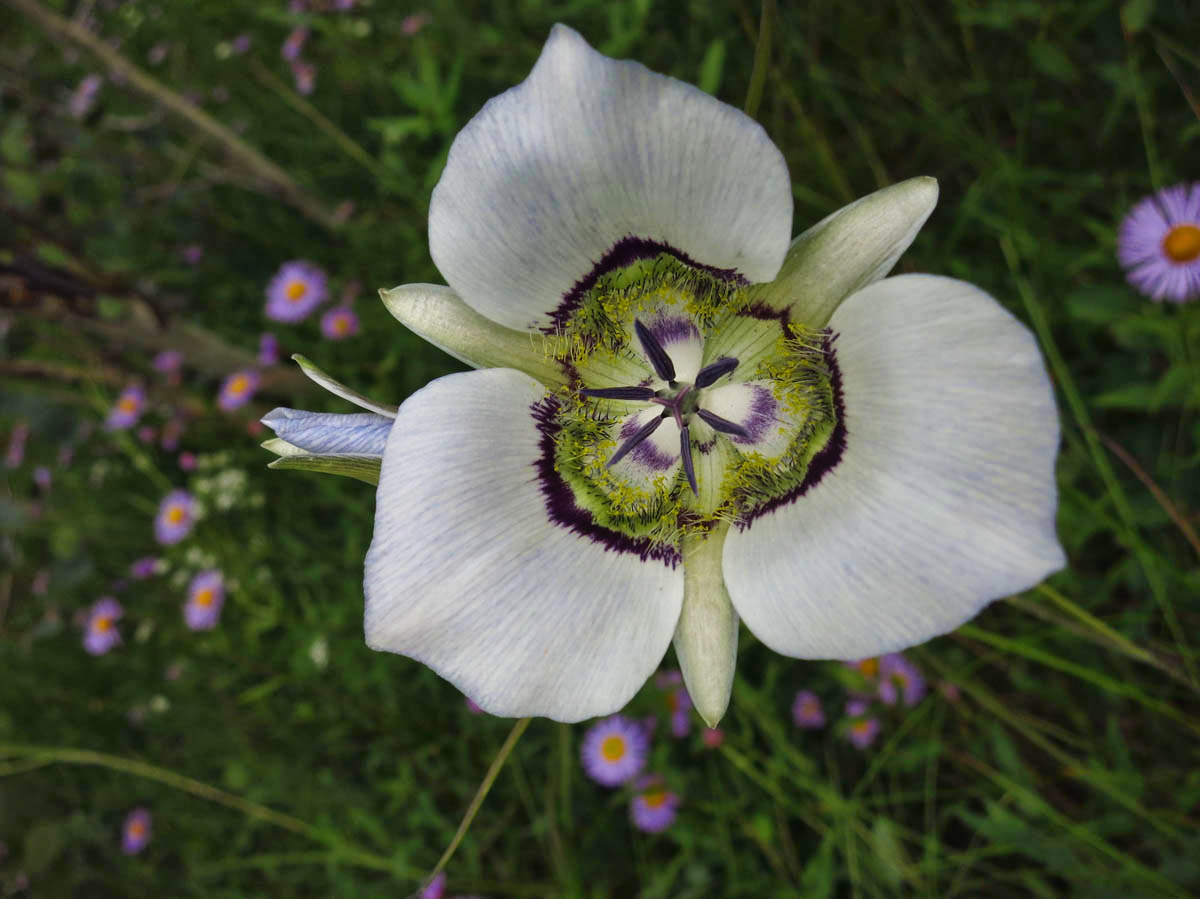 Thus far, the hike has been in dense thicket of pine and fir trees, and it shows no sign of opening up.   This is where we lose Debbie, right after Jim quotes Dante’, “Abandon hope, all ye who enter here.”  Jim, Gayle and I press on, but the incline never relents.   Just about the time we catch our breath, the switchbacks start again.  Still, we are determined, as the map description promises “180 degree views from the overlook!” 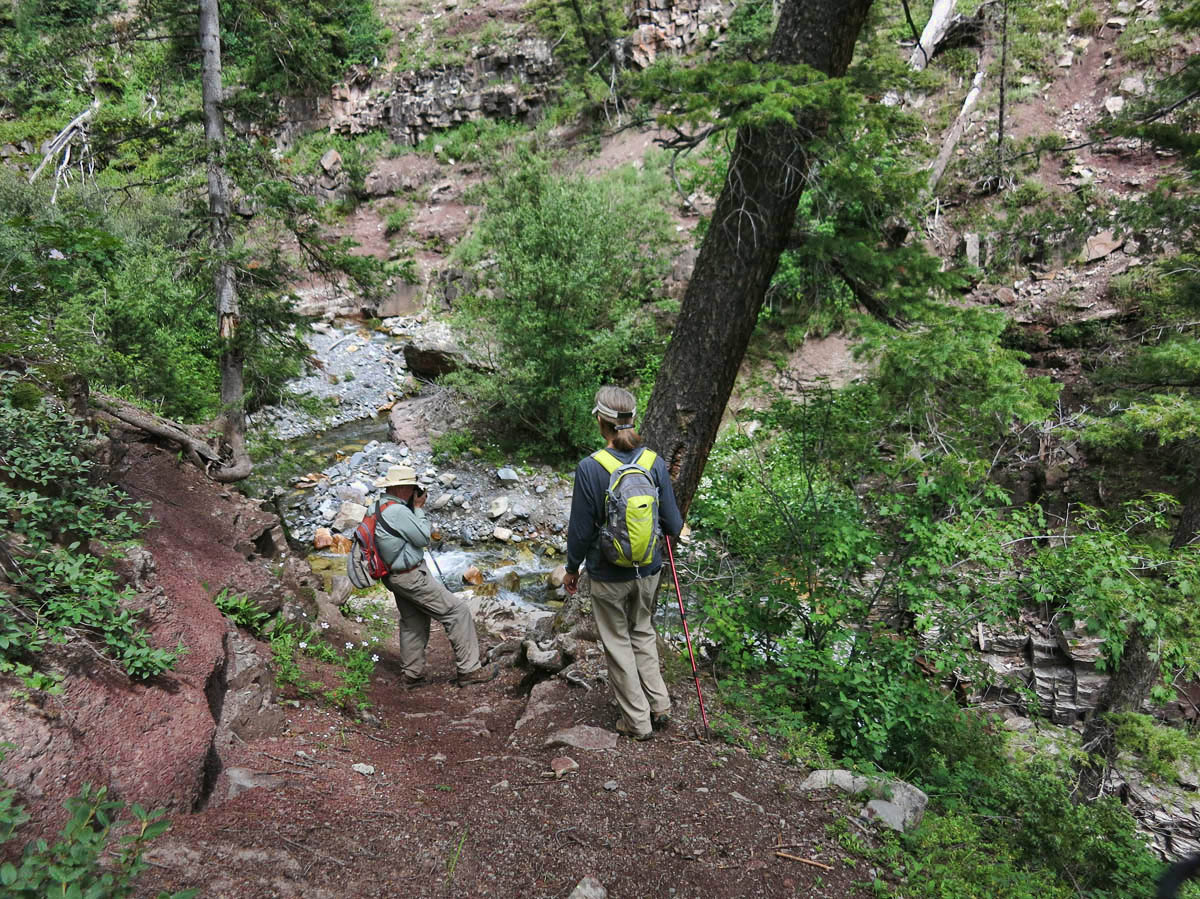 The only downhill stretch of the trail leads to more switchbacks on the other side of the creek. 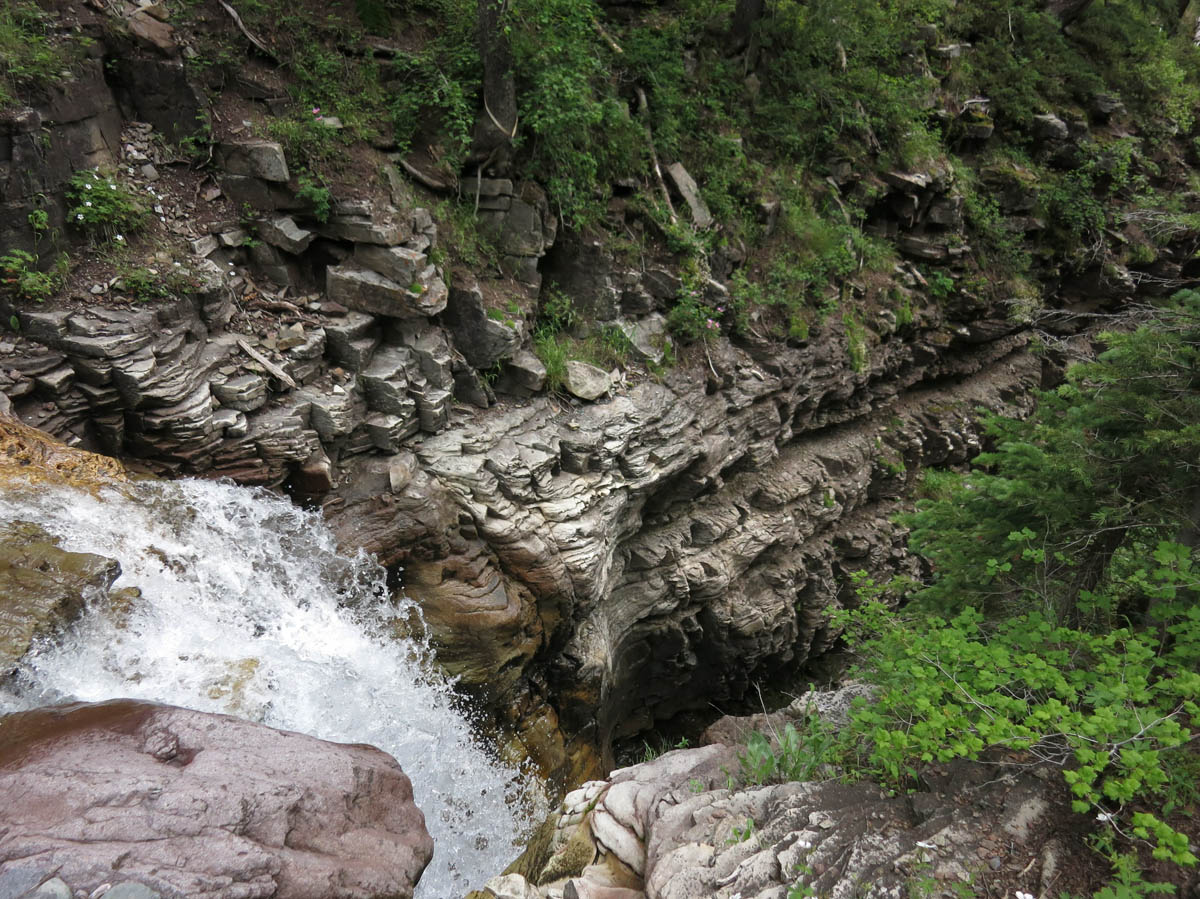 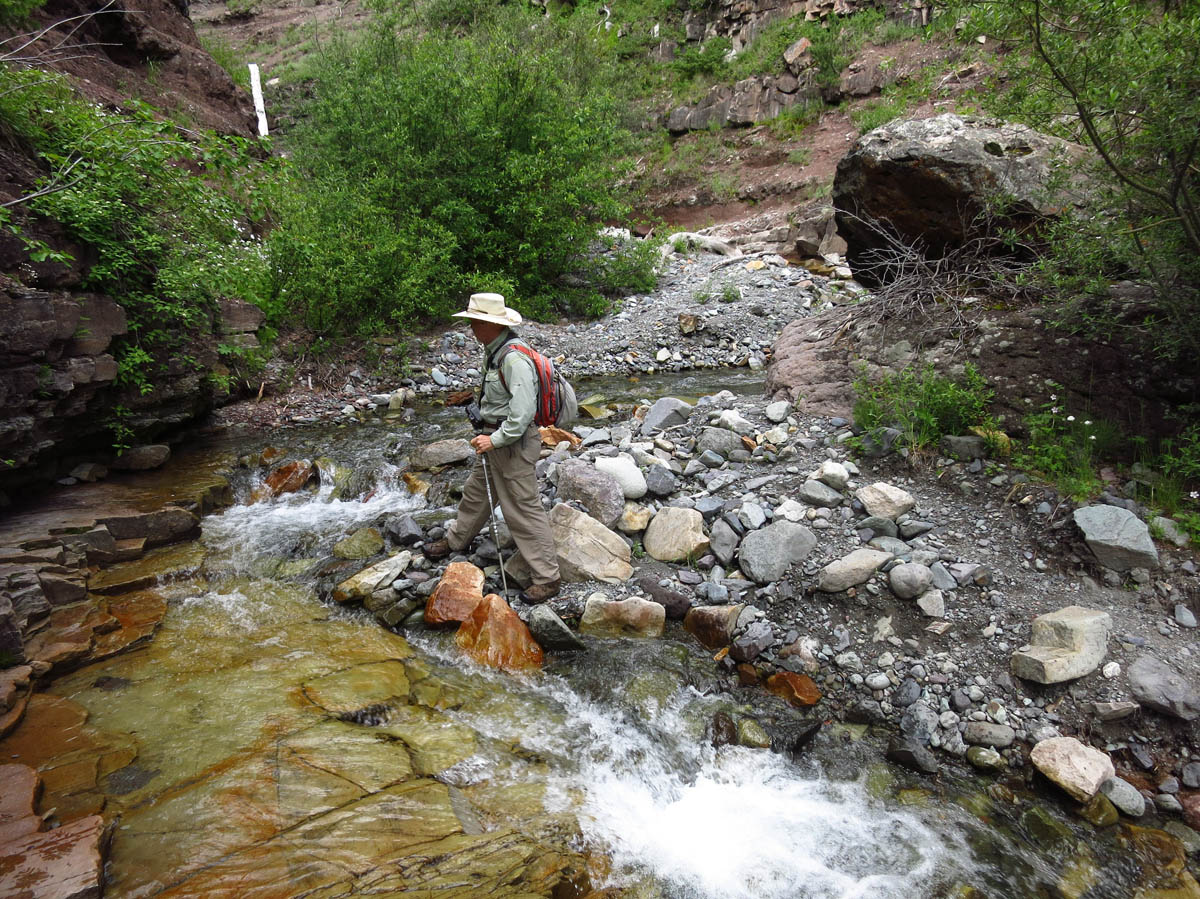 Peterman, about to test his new “camo” waterproof boots.

We traverse the trail to find a suitable place to ford the stream, where two canyoneers are suiting up to follow Oak Creek down what looks to be the easy way.   As we begin the climb out of the creek, I then lose Jim and Gayle.  They have had enough.  But I have come this far, I am determined to make it to the overlook.   I have had a lot of pain…I want my gain, damn it! 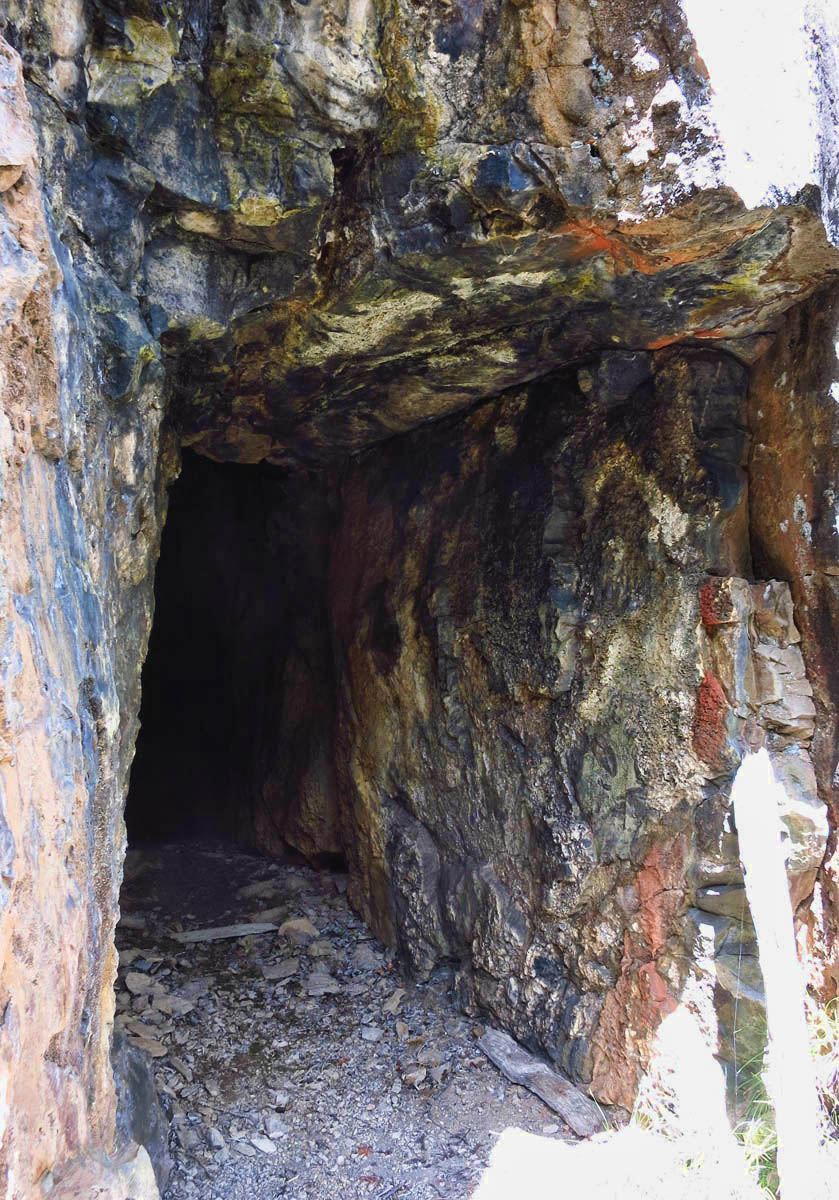 One of two abandoned mine shafts along Oak Creek Trail. 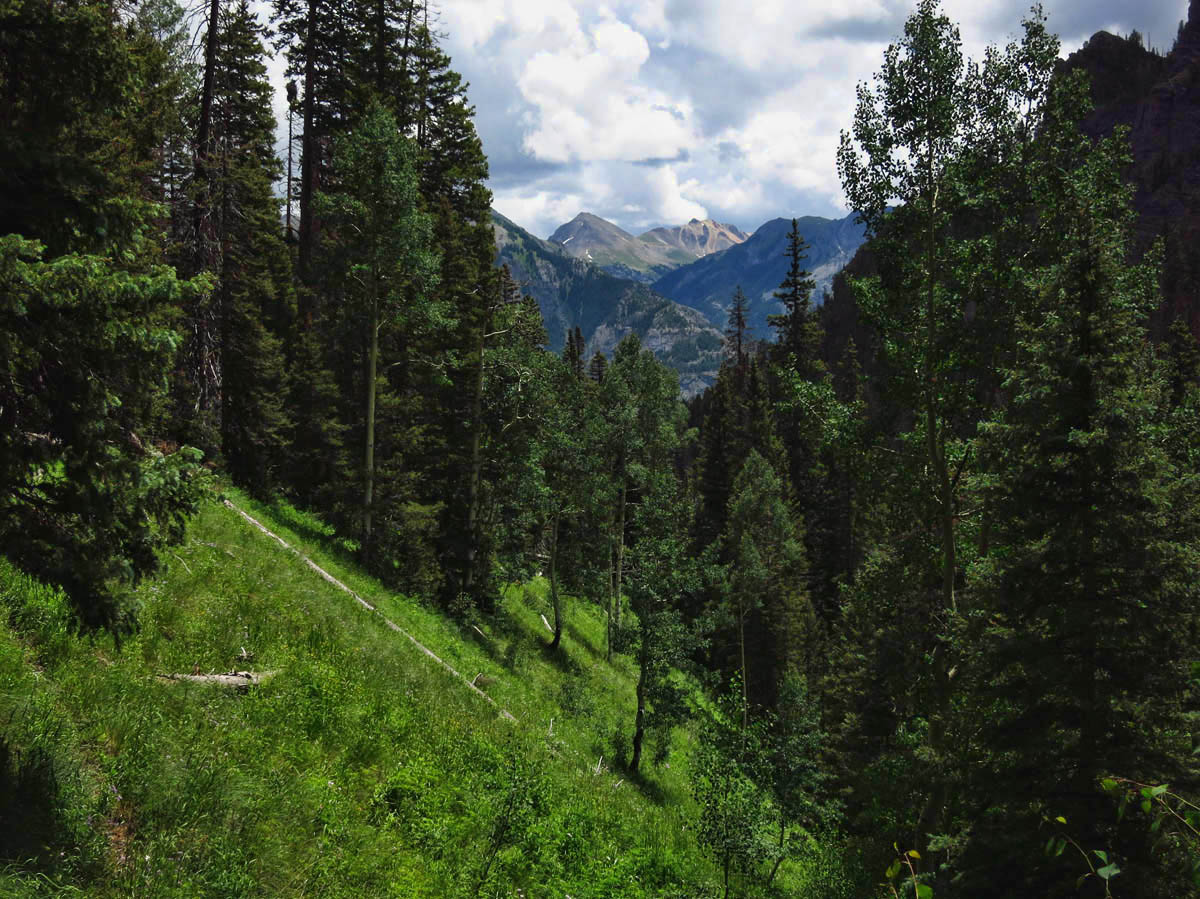 But alas, the Overlook alludes me.  I get to within 0.2 mile of what I believe to be the overlook, and I lose the trail altogether in cornstalk-like growth as high as my shoulders.   I have the confidence that I can get through it, but not that I can find my way back.  Besides, black clouds are rolling in overhead.   There is only one thing we have been cautioned about more convincingly than the steepness of the trails in Ouray, and that is to not underestimate the speed at which a thunderstorm can build. 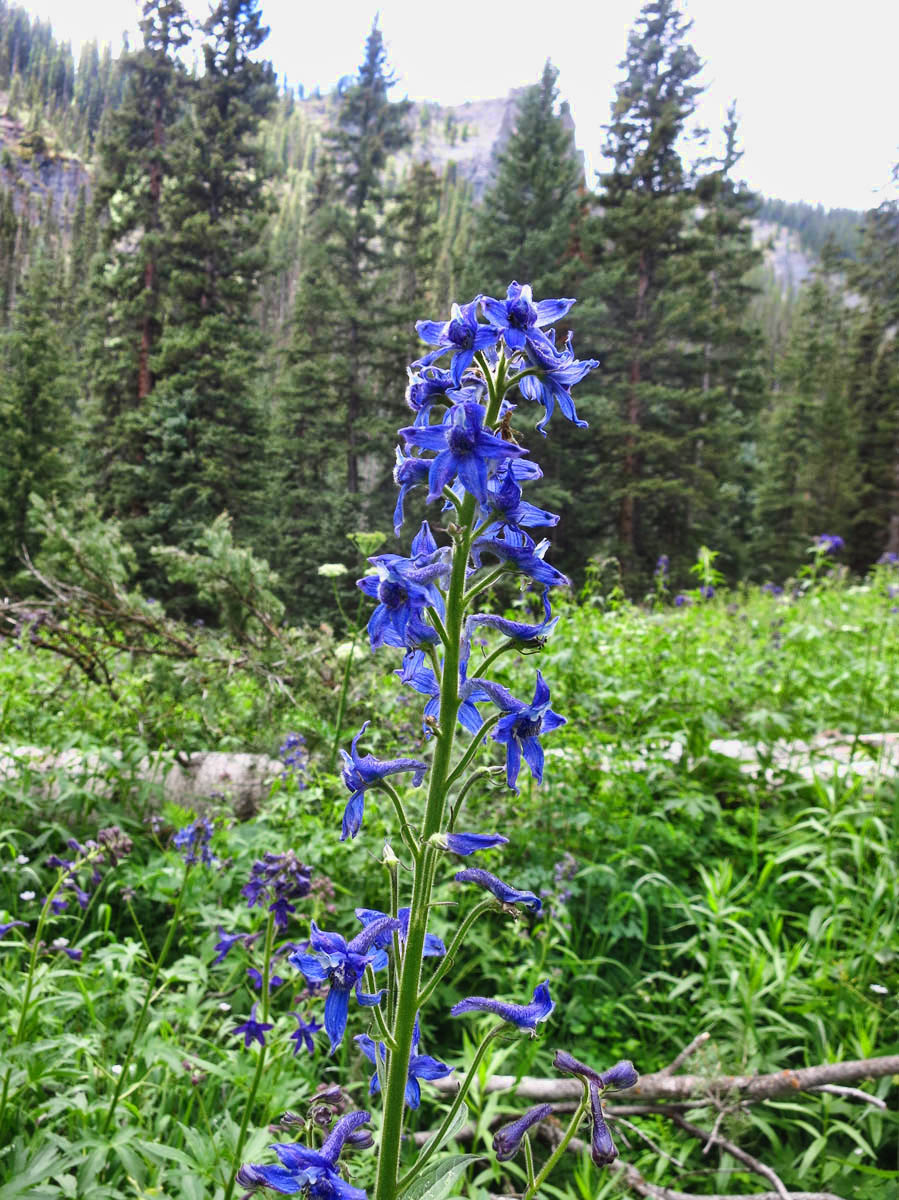 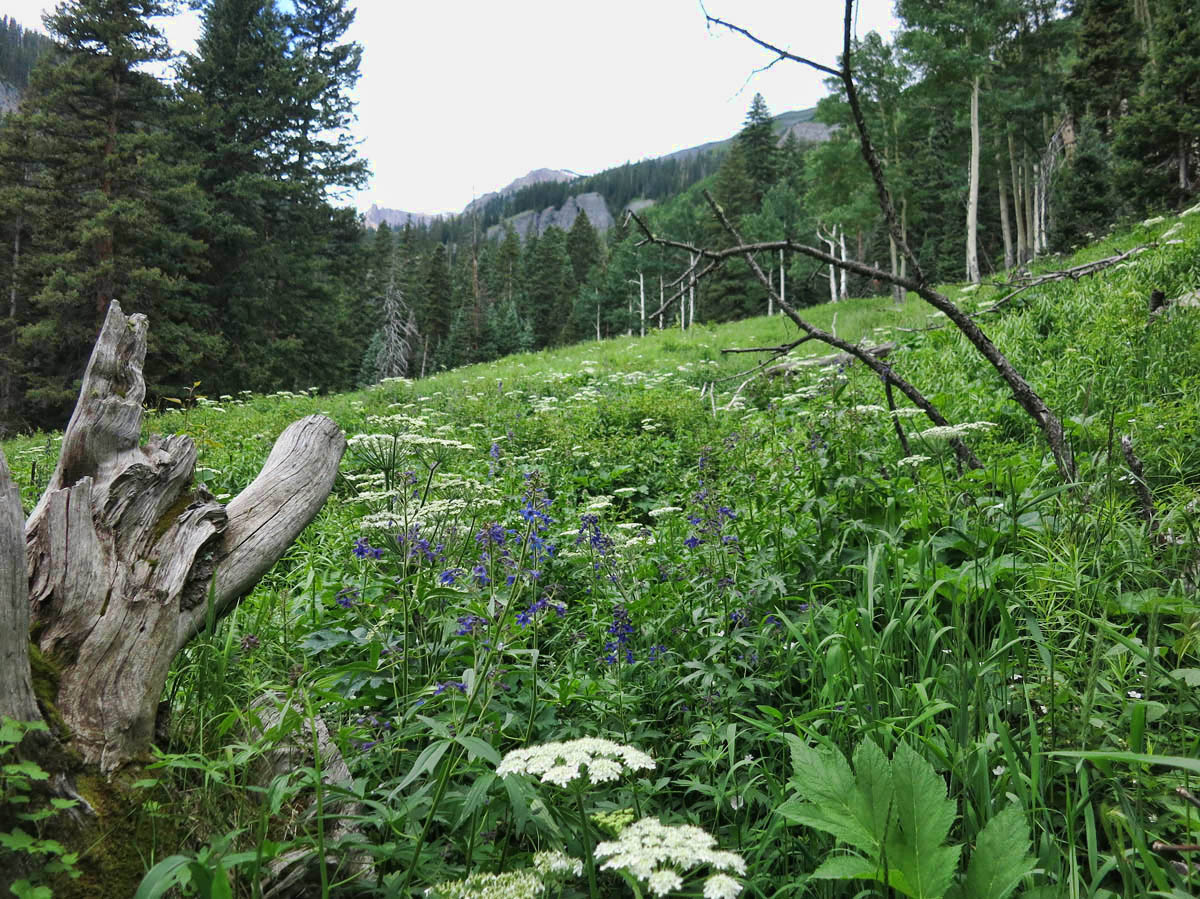 I reluctantly turn around, defeated at not having made the overlook. I fly back down the switchbacks as fast as my feet will carry me, hoping to outrun the thunderstorm.  Figures, I get as far as the trail head on the outskirts of town when the skies open up.   Thankfully, I learned the valuable lesson from the previous days hike around the Perimeter Trail.  Raincoat – Don’t leave home without it!

As I am nearing town, I get a call from Jim.  I tell him I didn’t make it to the overlook, only to learn Mark and Bobbie have told him there really is no overlook.  Just a wooden sign with no view.  They are all headed toward the Ouray Brewery, so I race to meet them there.  I will just have to settle for “gain” of a different sort to ease my pain… 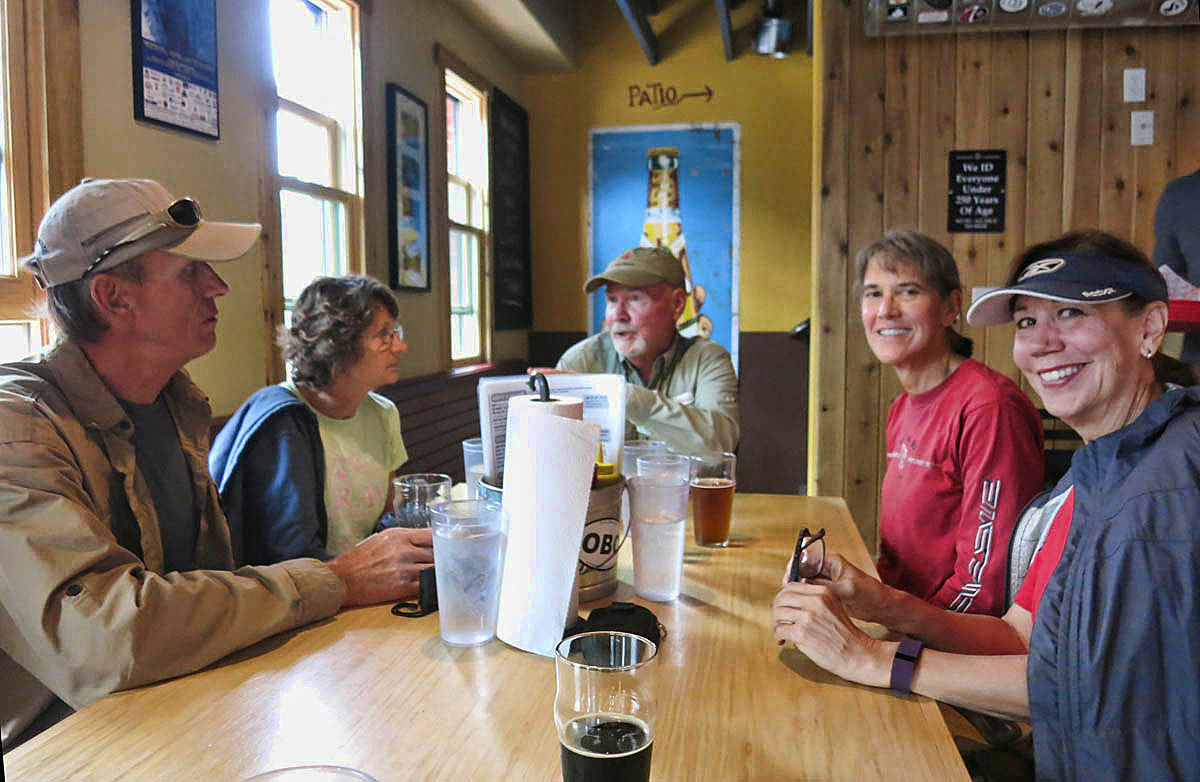 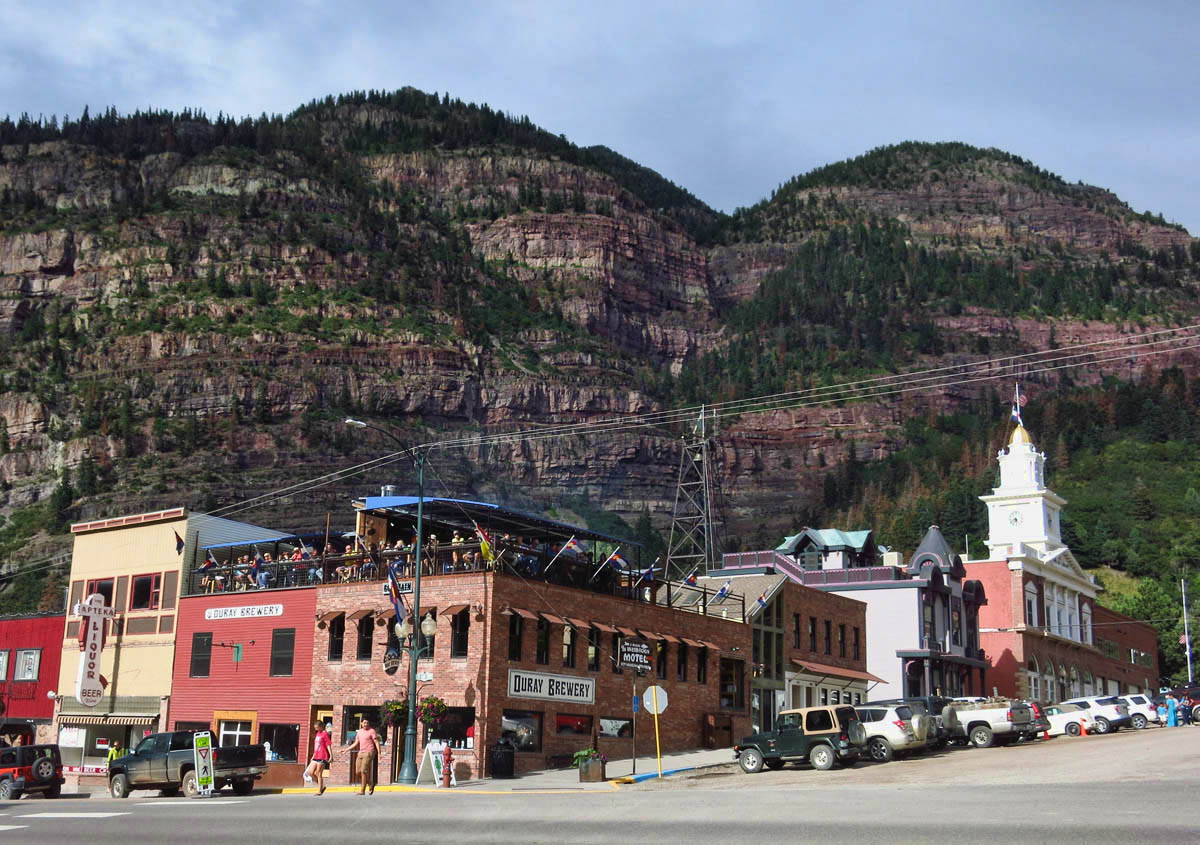 “The reward of a thing well done is having done it.”
~Ralph Waldo Emerson 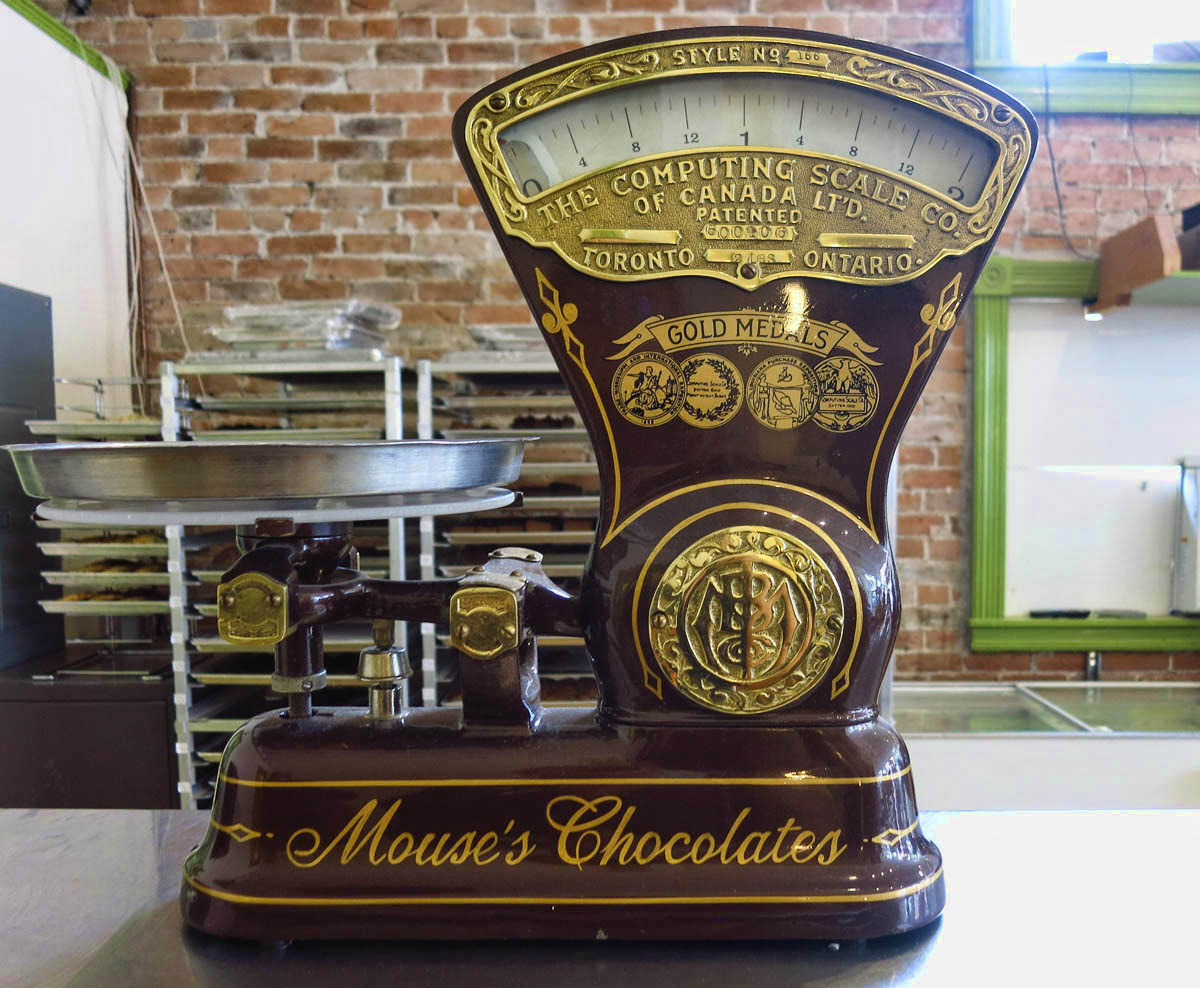 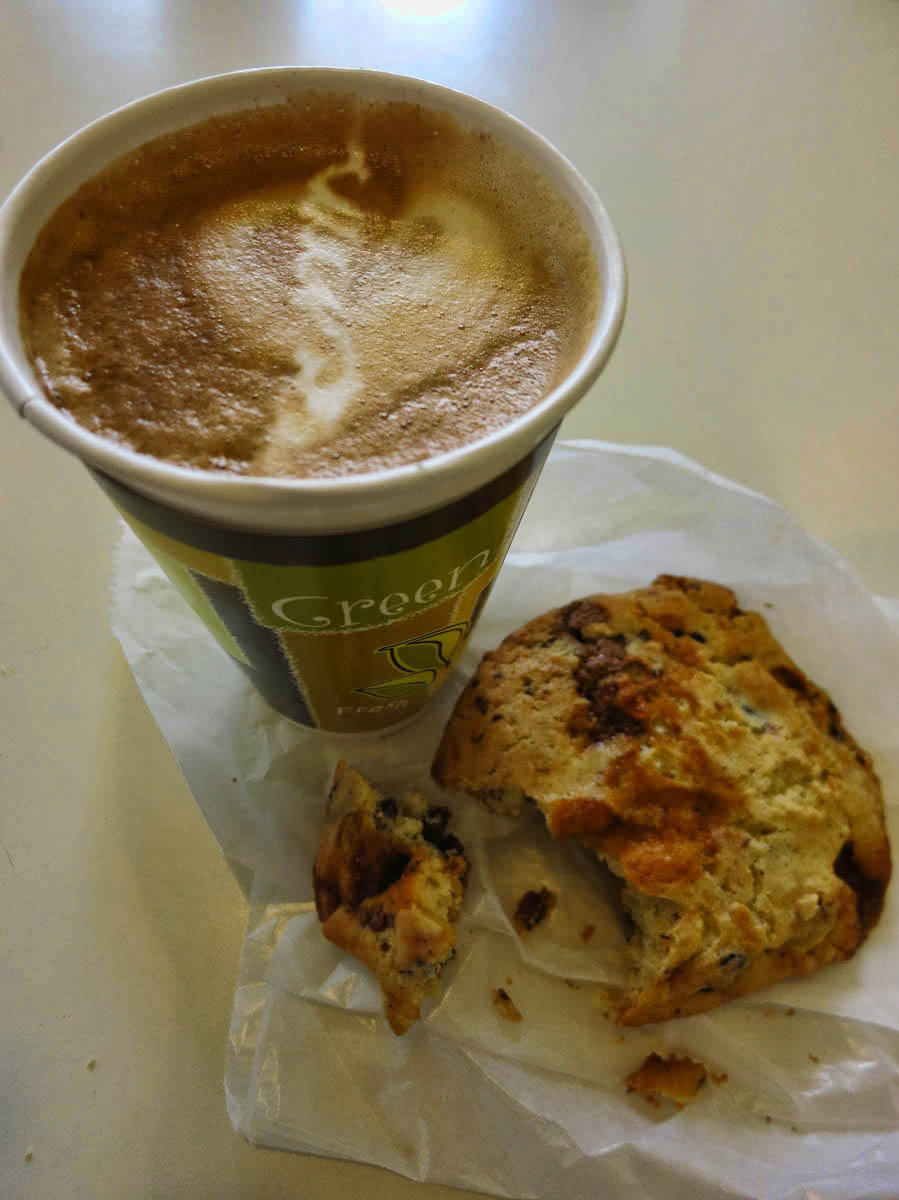 The Notorious Scrap Cookie and a Latte — Guaranteed to bring “gain” of a different sort!