Wildflower season is winding down in the San Juans, and so is our Ouray Utopia.  It has been an incredible time here, connecting with former friends and making new ones.  The hiking has been among the most spectacular I have done yet, way up there, where the air is rarefied.   My addiction for “getting high” has grown stronger than Colorado’s legalized marijuana business.

There have been a few fun surprises in our Utopia, like getting invited to go over Black Bear Pass with Mindy and Chris, and getting to finally meet Glenn, a blogger who’s path to simplification I have followed since the initial nomadic seeds were planted back in 2010.  There have been unexpected delights like the outdoor concert series in nearby Ridgway, accompanied by the best gourmet tacos on the planet at local Taco del Gnar.  If you are in Ridgway, take my advice…don’t miss these “gnarly tacos!” 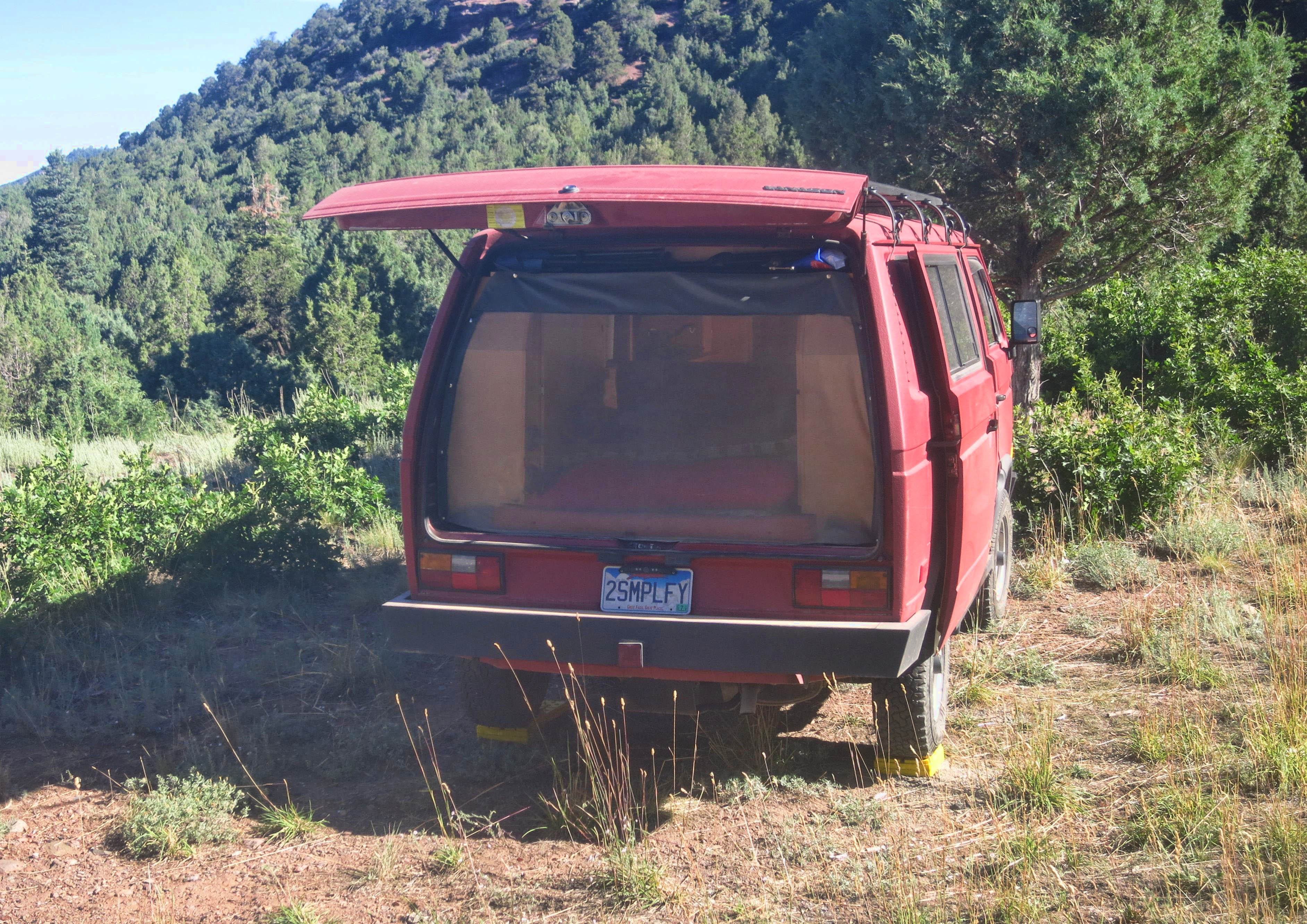 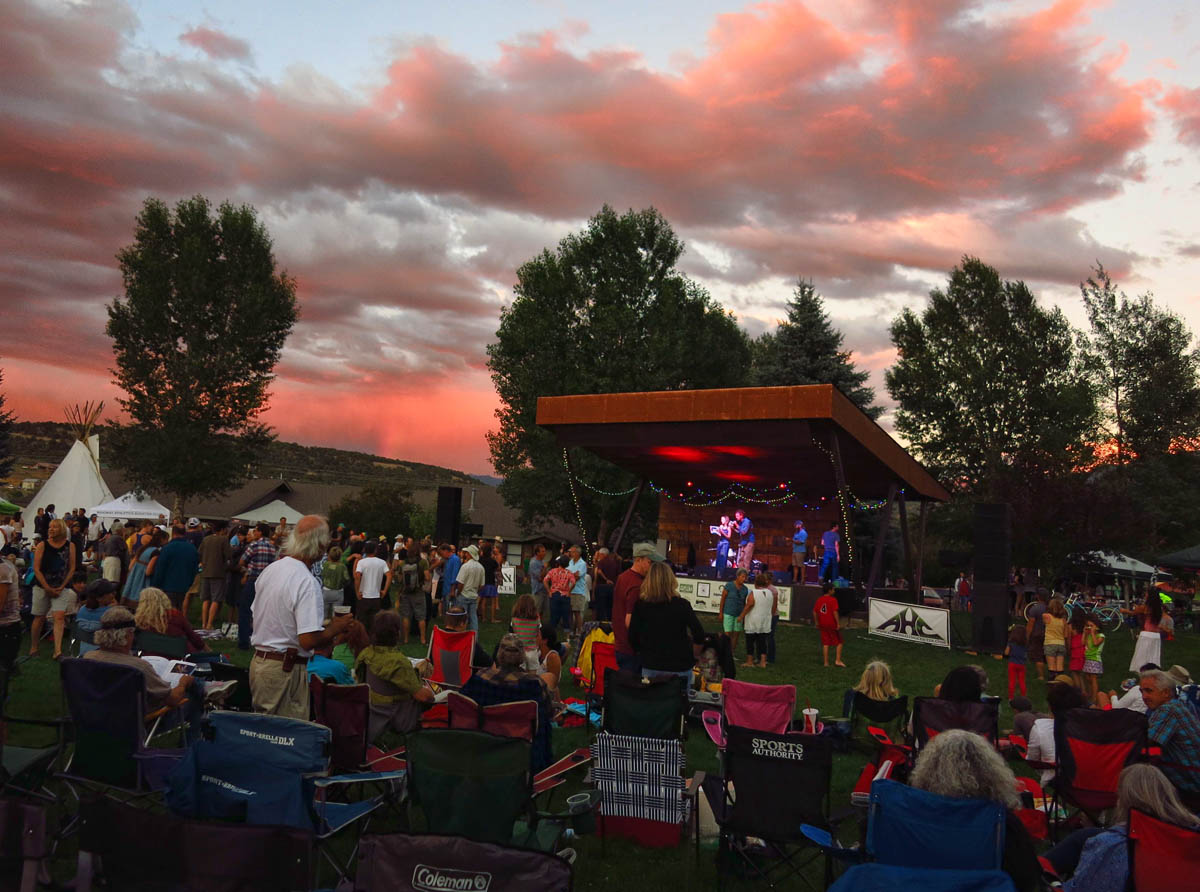 But one by one, our “gang” numbers are dwindling quickly, as are my days left to hike the Ouray trails.  Of the many hikes Mark and Bobbie have recommended as “must dos,” I am down to just a couple left on my wish list now.  Bear Creek Trail, just outside of Ouray off the Million Dollar Highway is at the top of that list.   Chris and Debbie have both done this hike before.  Mark is now out on “injured reserve” following hernia surgery.   Bobbie is on grocery store duty.  And Jim and Gayle have left Ouray headed north.  So it looks like I will be doing this hike solo. 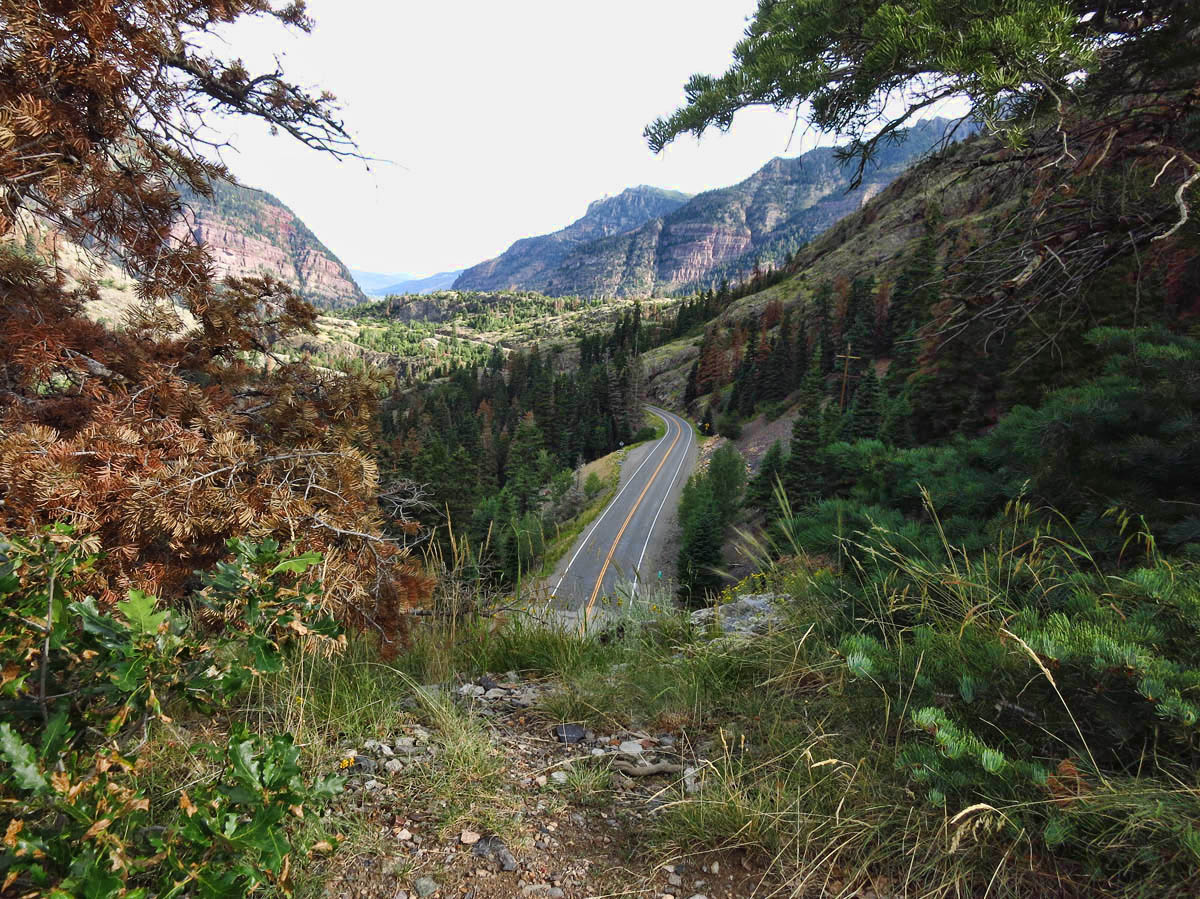 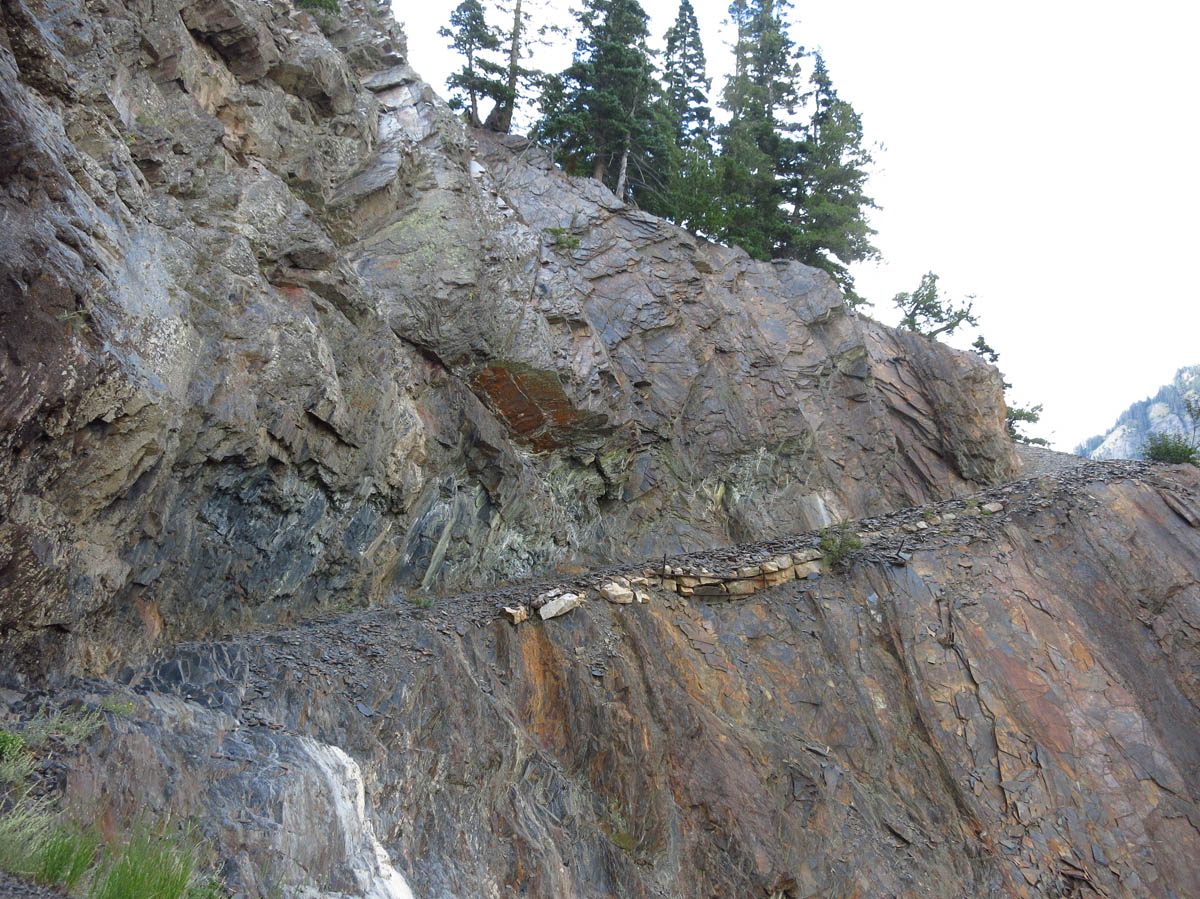 One downside of hiking solo is no “models” on the steep, narrow cliffside trail for perspective.

Not only will my Bear Creek hike be done solo, but I am about to head off on my own for the first time since Organ Pipe National Monument last February.   While most of the tribe will be heading north, I am pointed south.  As the neophyte full timer among the group, there are places I want to visit where the others have “been there, done that” already.  So they will all head north to discover uncharted meadows in Crested Butte, while I have a train to catch. 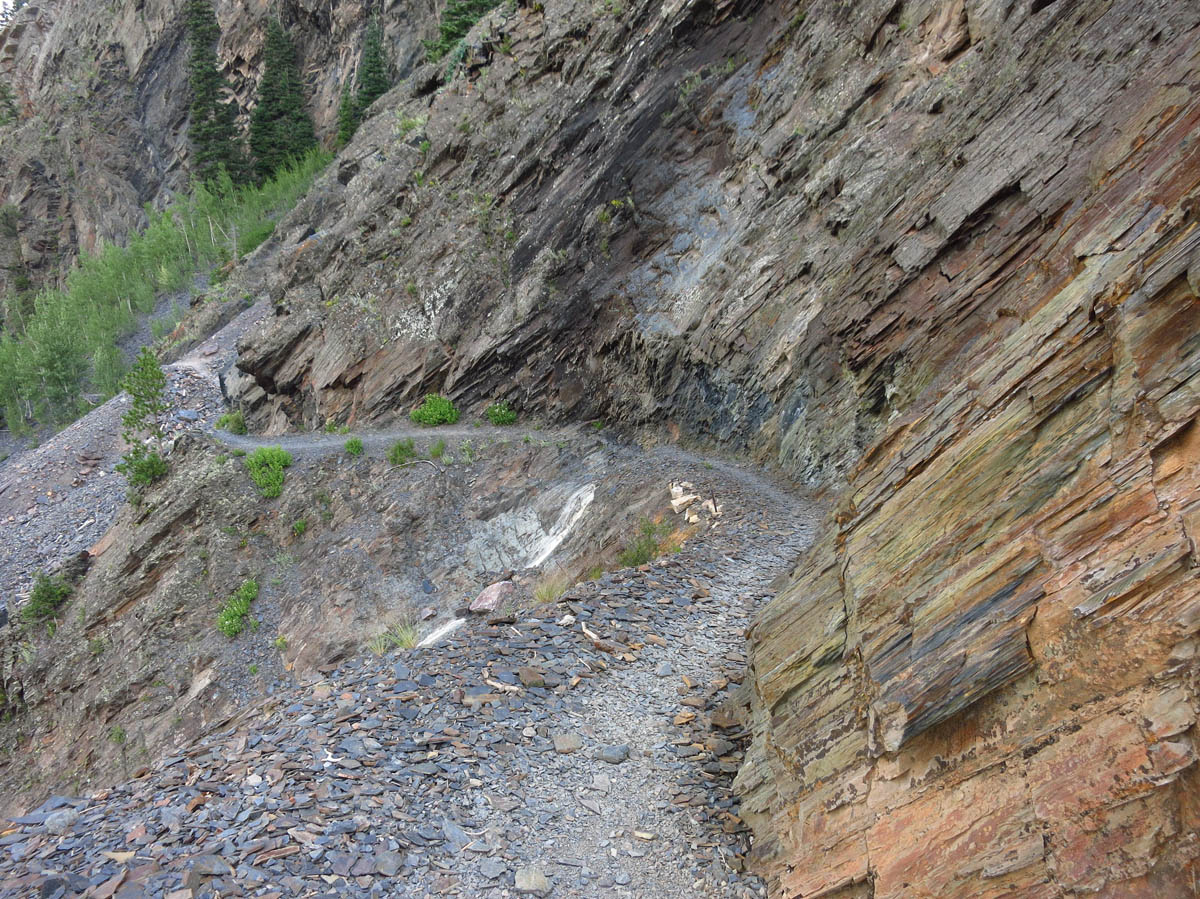 The trail starts up narrow switchbacks right away. 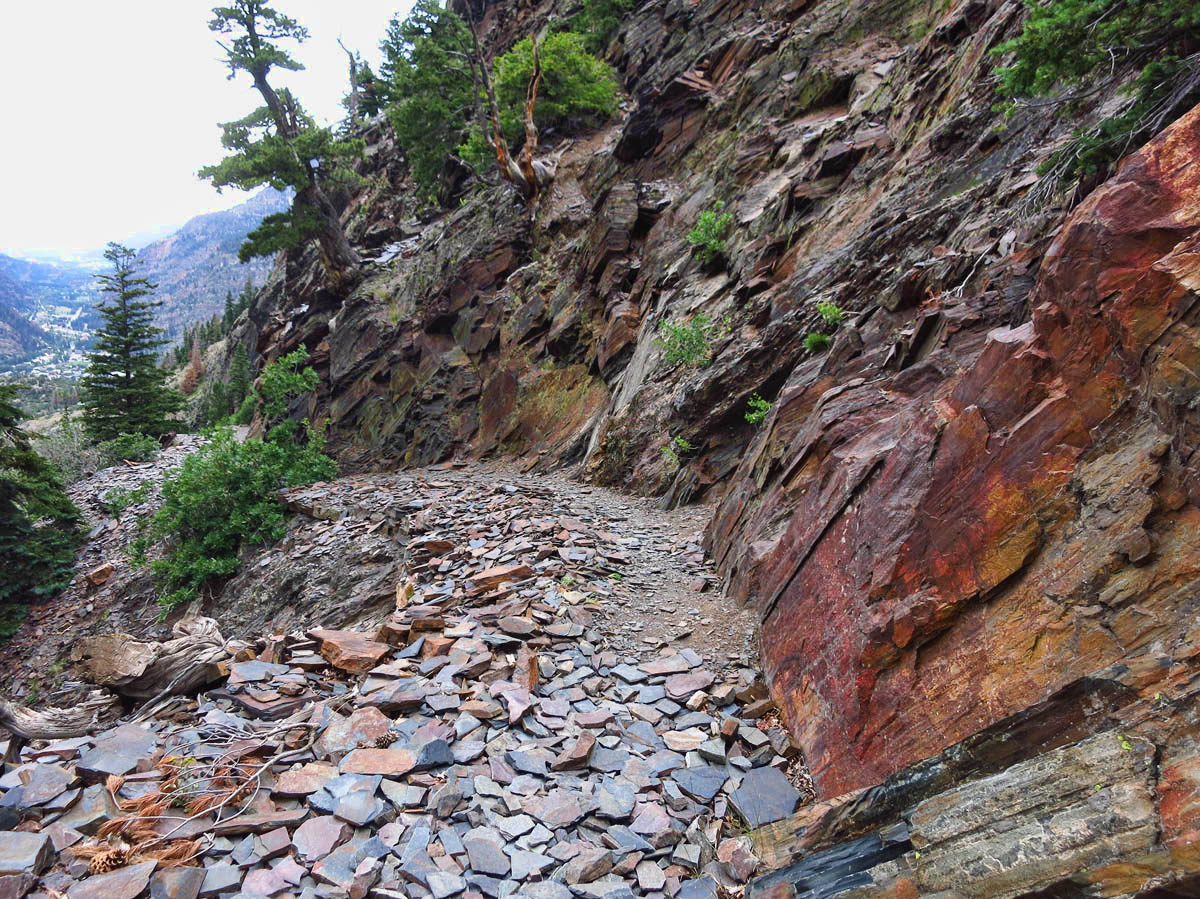 Rock slides of slate sound like breaking tiles beneath my boots.

I must be honest with myself that “breaking from the pack” after the year I have had leaves me with a bit of apprehension.  It has already been a year of too many “goodbyes.”  One would think they would get easier, not harder. But given that a lot of those goodbyes have been the result of sudden departures home to bury my loved ones, I am left feeling more tender than usual.   The summer has been such a roller coaster with the most extreme highs and lows that I have ever experienced before in my life.  Since Stephen’s death ripped a gaping wound, the highs seem higher and the lows seem lower, as if all the nerves in my pain center had been sharpened by a single-edge razor, leaving me with a heightened sense of awareness of life’s tenuous balance.   So I wonder if leaving my nomadic friends behind will be too much loss.   If one is to survive the nomadic life, one must master the art of “goodbye” with a great deal more grace than I have shown lately. 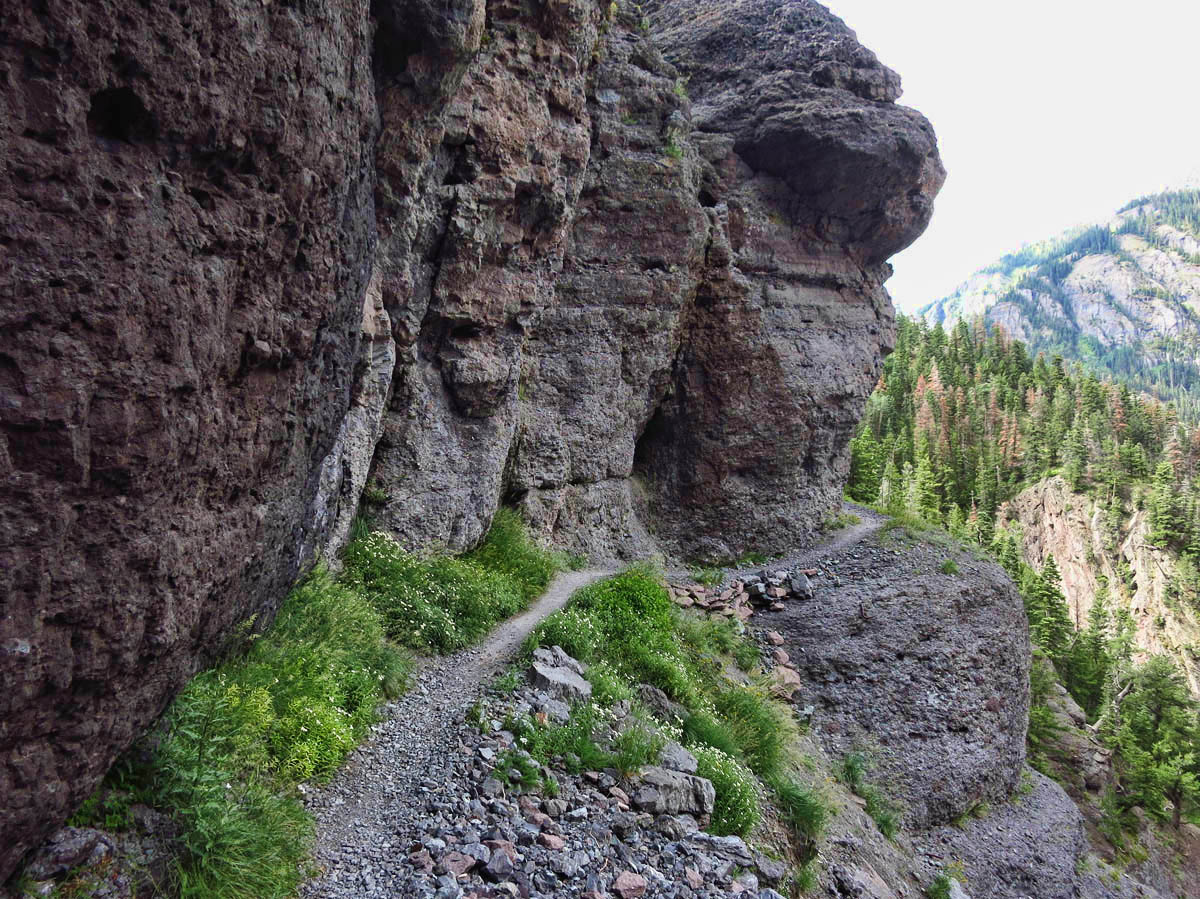 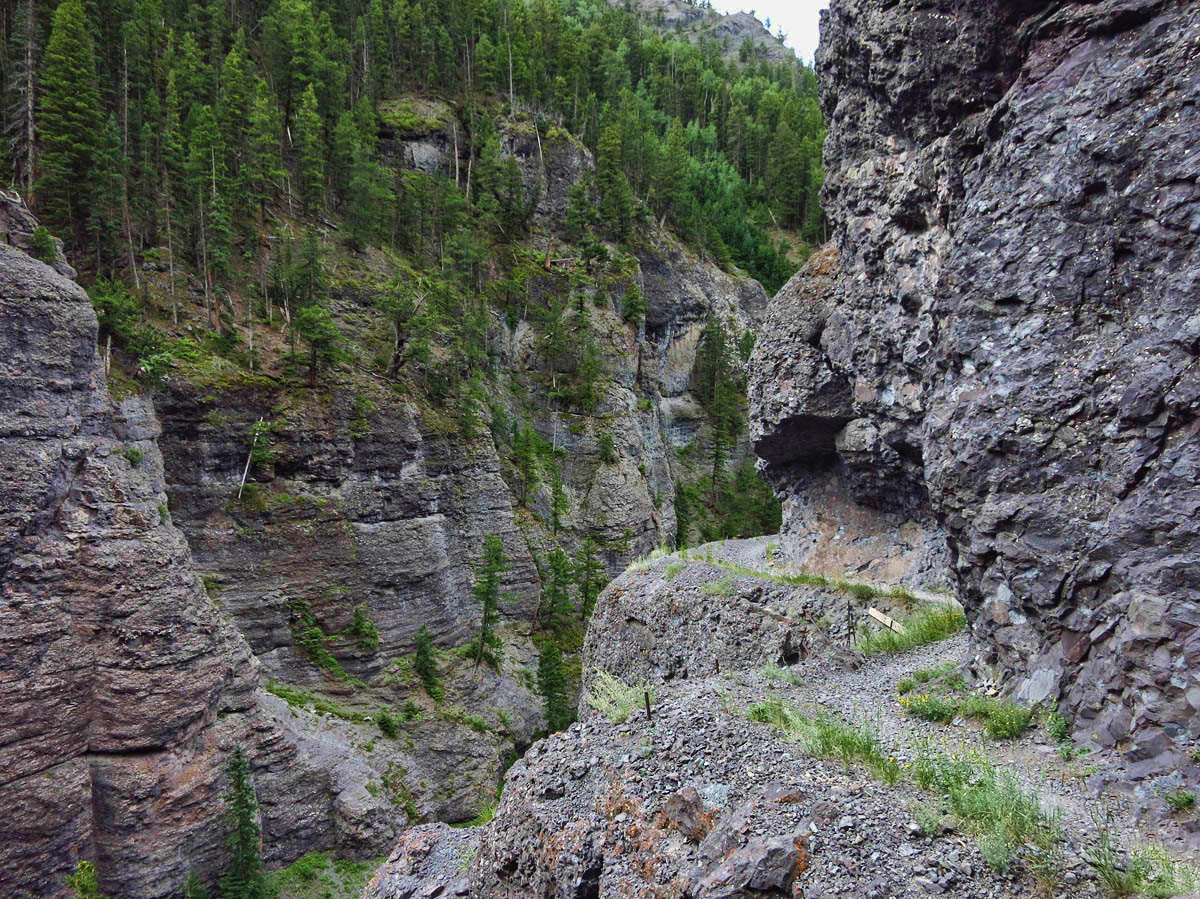 My goal this day is to make it up the Bear Creek Trail as far as Grizzly Bear Mine, 4.4 miles round trip with an elevation gain of 1,560’ up a sheer, rocky cliff.   This trail is unique for many reasons, the greatest of which is being carved into the rugged cliffside of the Uncompagre Gorge. Quite a bit of gold and silver was discovered on the opposite end of the 700 ft deep gorge back in the 1870’s with no way to retrieve it, so the miners blasted a trail in the side of the cliff, which is now the Bear Creek Trail. 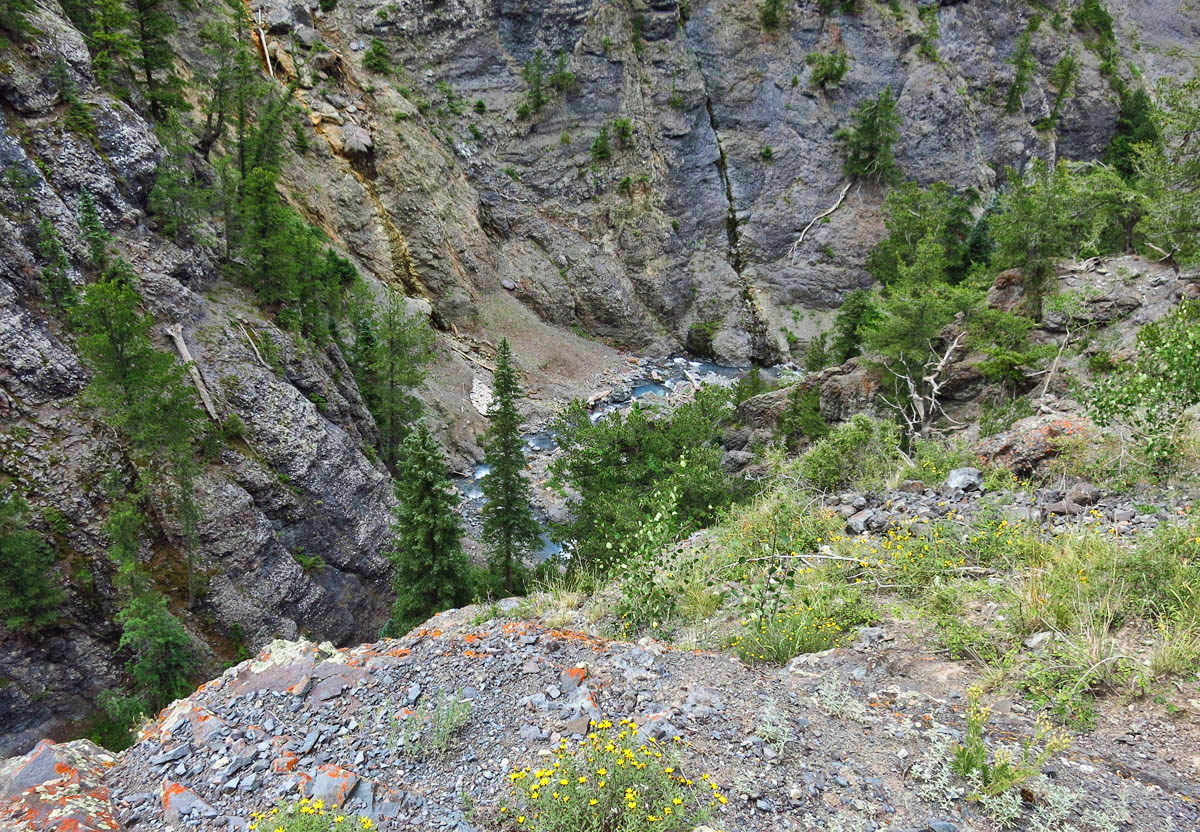 That beautiful blue ribbon at the bottom of the gorge is Bear Creek. 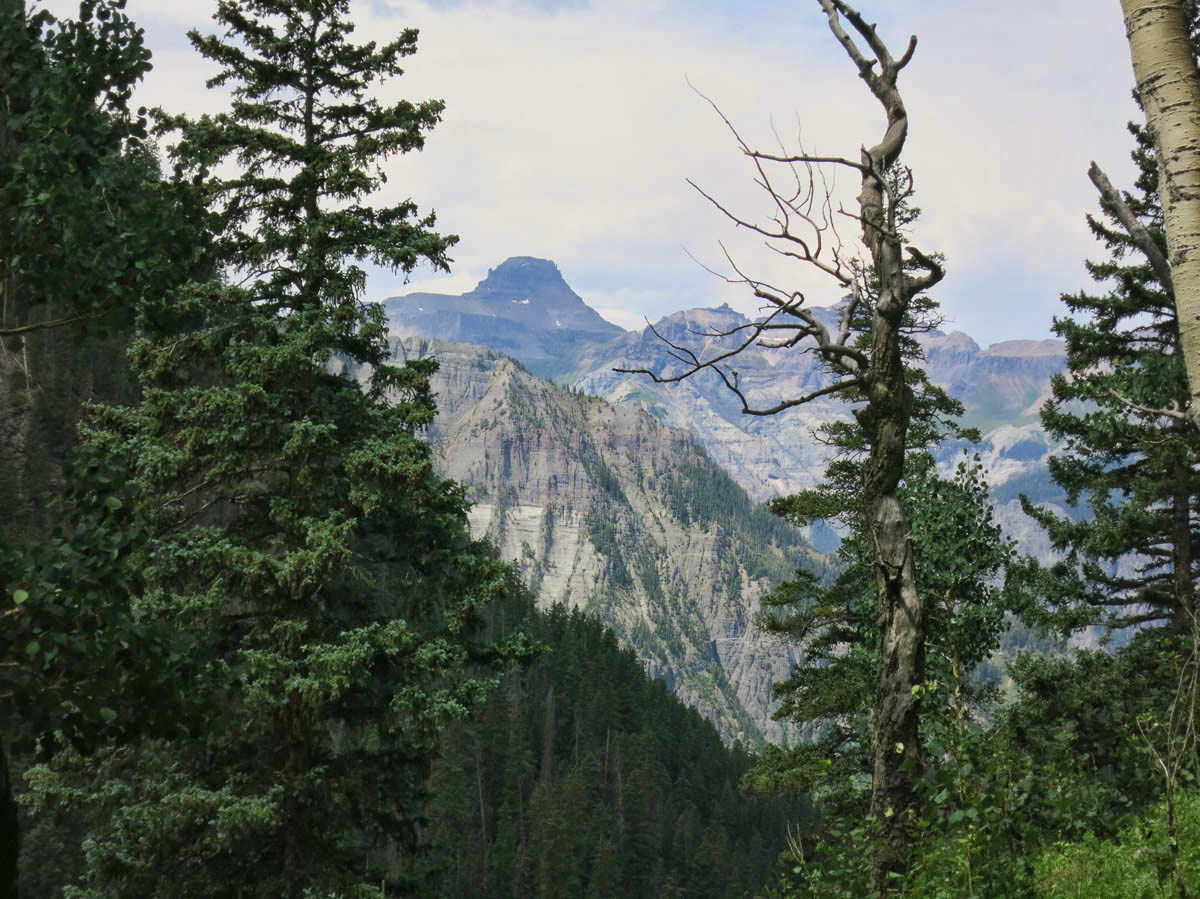 The sound effects on this hike are unique as well.   The first part of the trail ascends some pretty steep switchbacks that are lined with rock slides of slate that sound like tiles breaking beneath my feet.   And since it follows Bear Creek for most of the hike, the roaring sound of the creek and falls echoes up through the walls of the gorge. 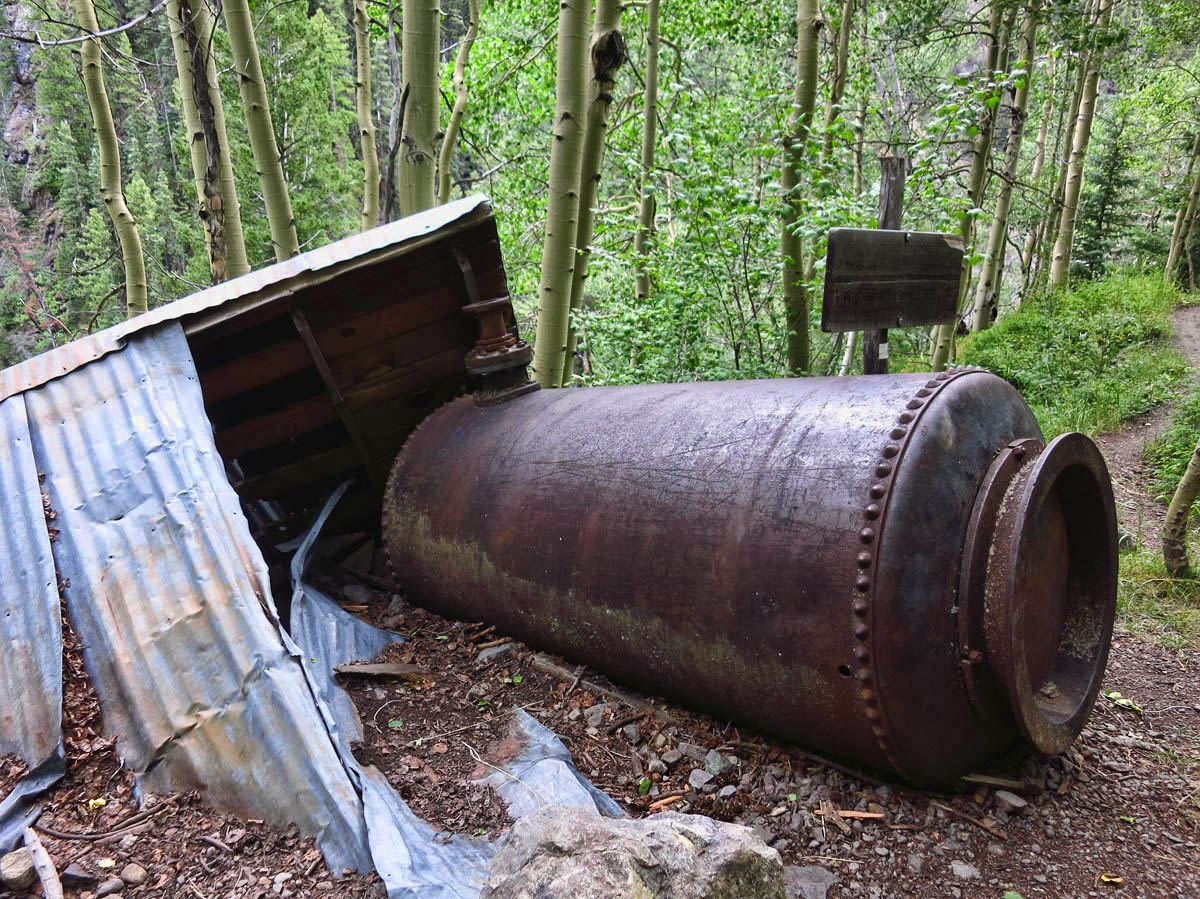 Remains of Grizzly Bear Mine. 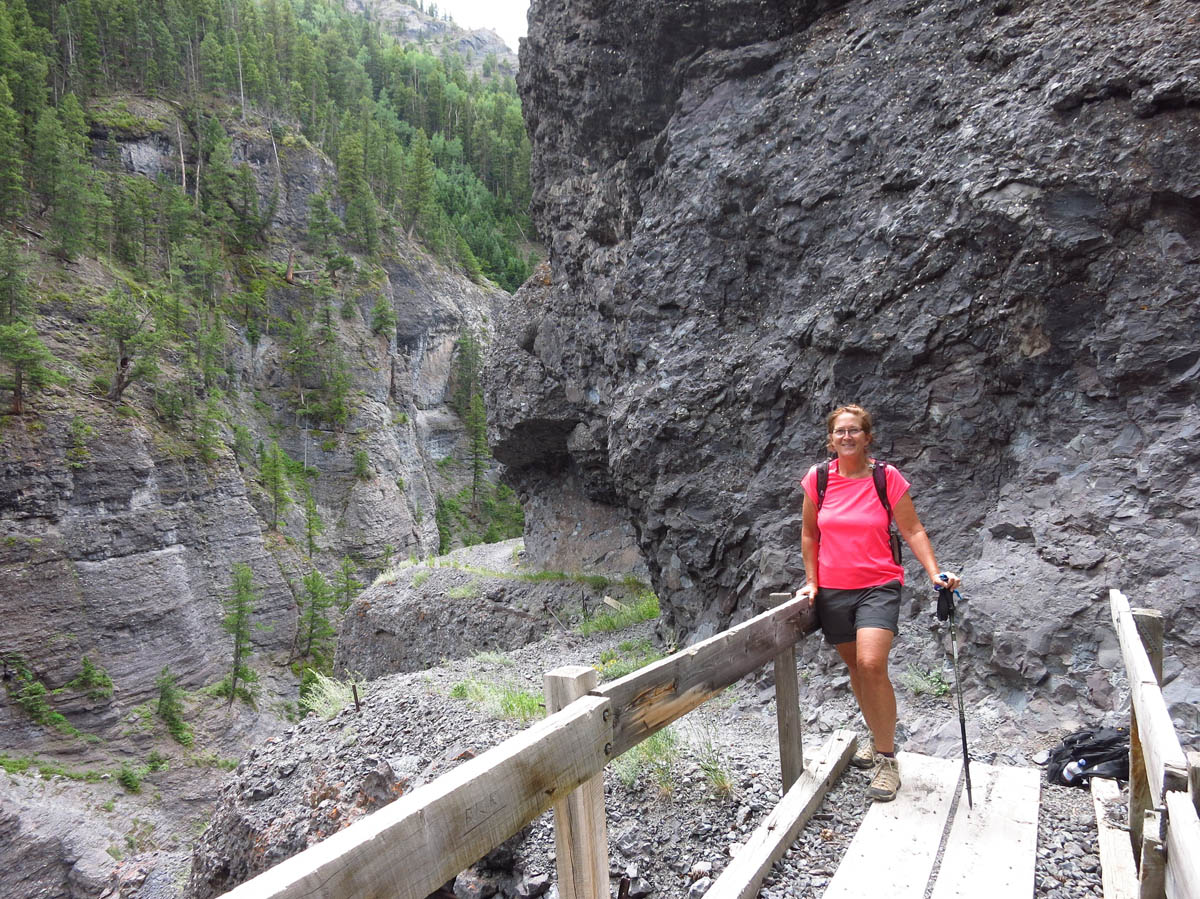 A rare reciprocal photo opportunity on the bridge, as there are few hikers on the trail today. 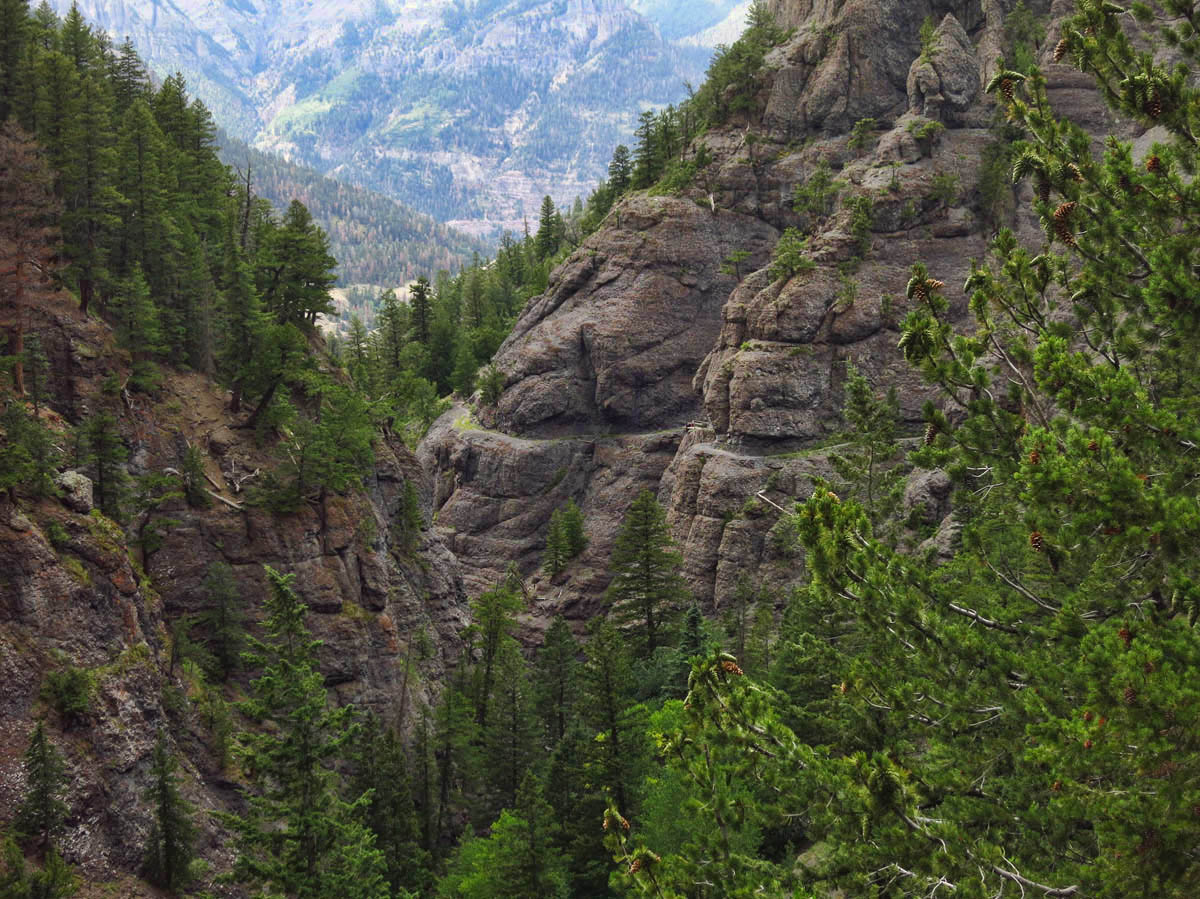 Trail looks like a belt too tight around the mountain’s midsection.

The trail narrows down to a few feet in sections as it follows the contours of the canyon.  I reach Grizzly Bear Mine sooner than expected.  I am feeling good so I decide to keep going on toward Yellow Jacket Mine, and see how far I can get.  It will mean an 8 mile hike with a 2,660’ elevation gain, but I decide to go for it, with the knowing that it is an “out and back” hike, and I can turn around at any time. 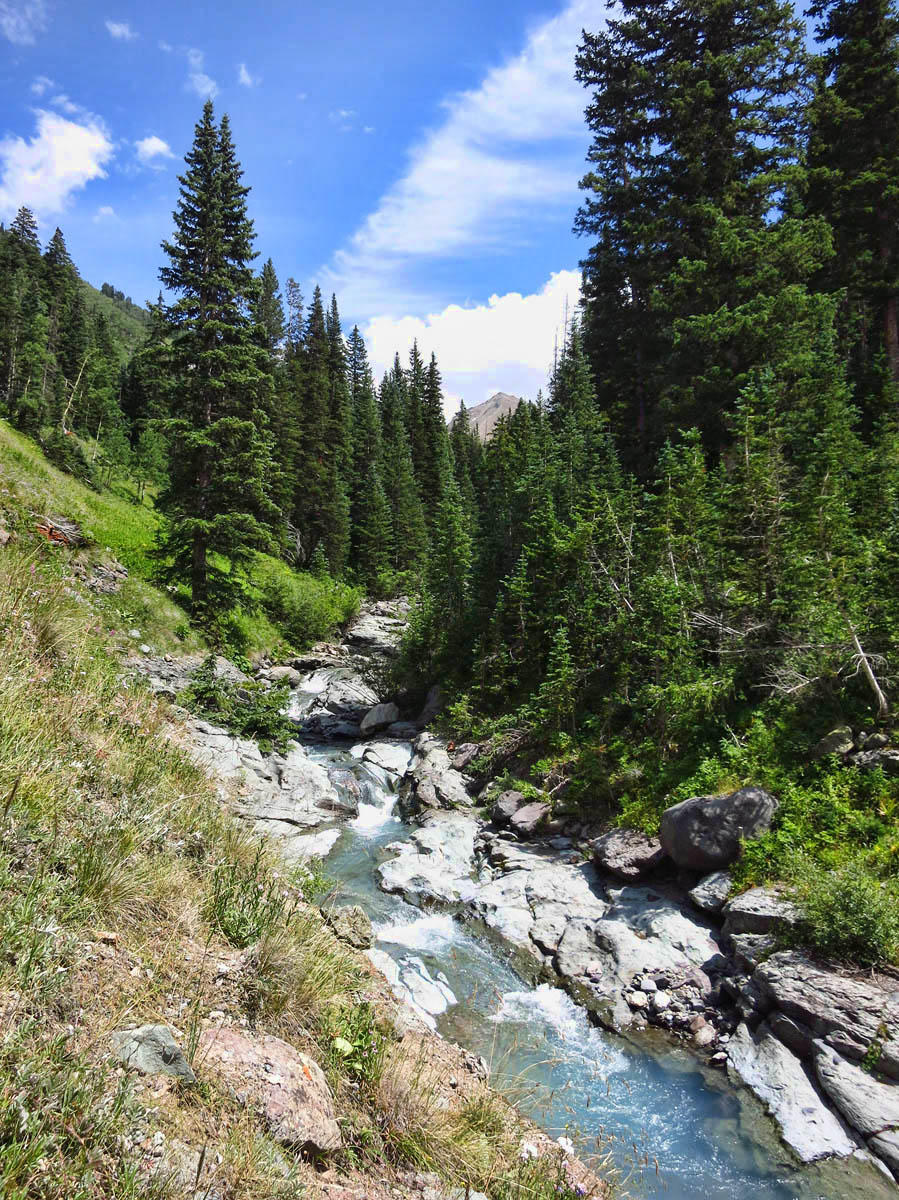 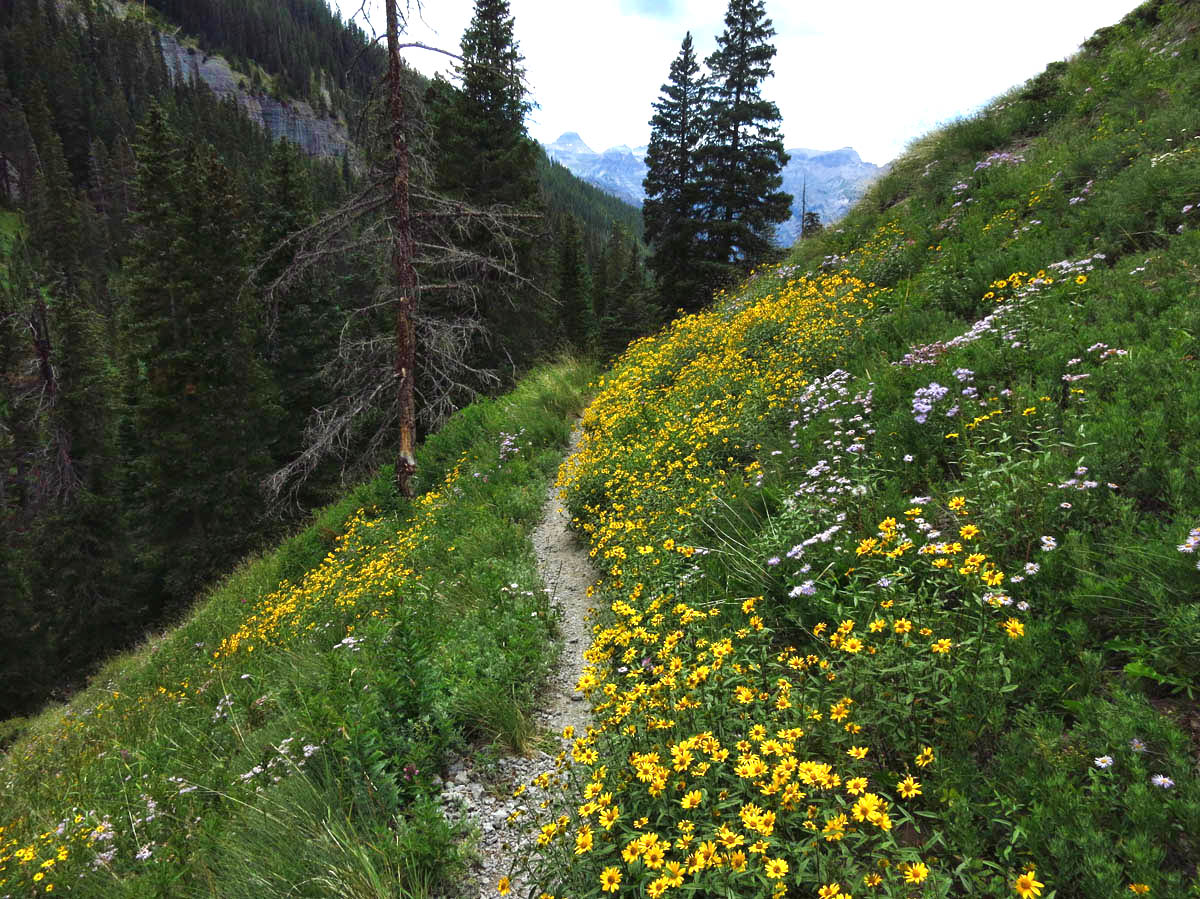 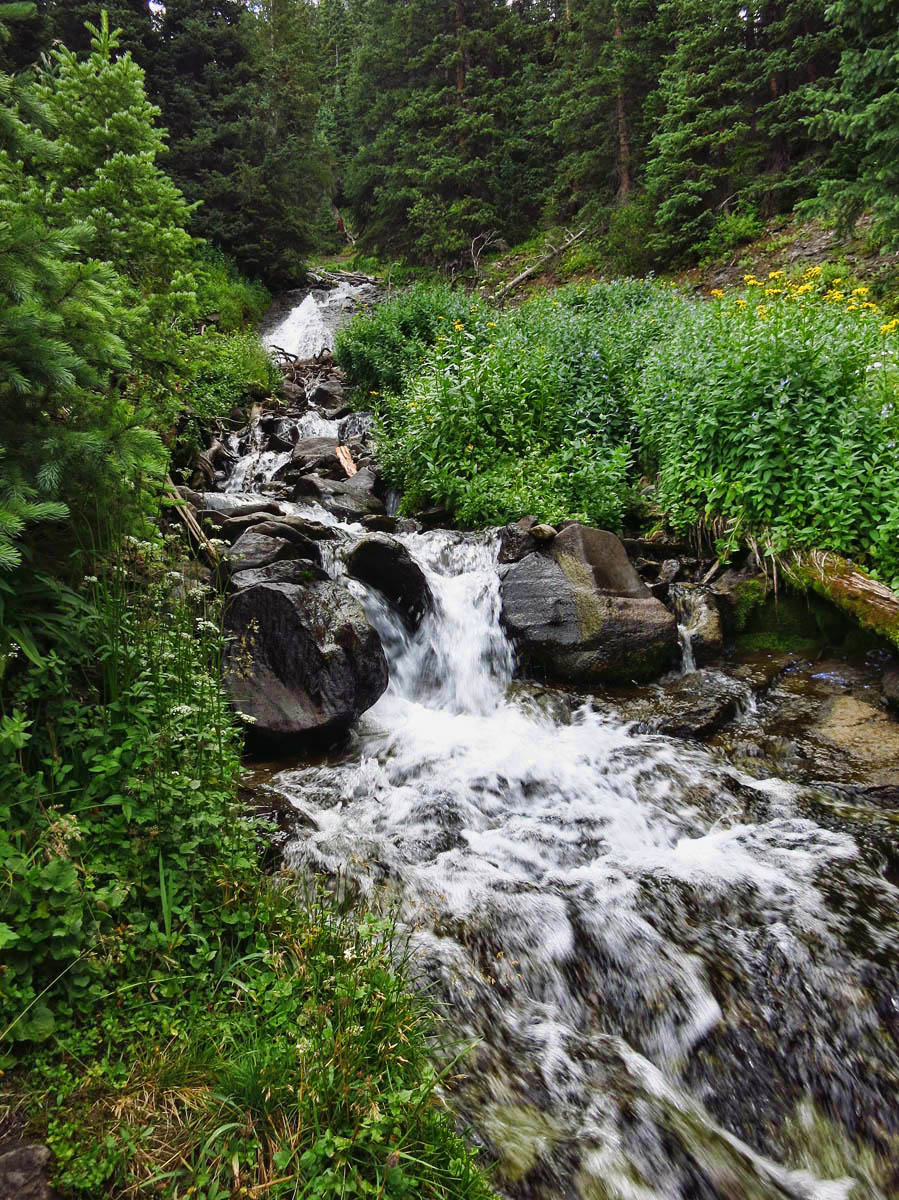 I see very few people beyond Grizzly Bear Mine.  The incline becomes more gradual as it follows the clear blue Bear Creek up the basin.  The higher I climb, I see some remaining patches of wildflowers and a few wild strawberry vines.

The last mile is tough, psychologically.   I realize my Garmin hand-held GPS is malfunctioning, as it says I have traveled 6 miles, while I know it is only 4 miles to Yellow Jacket Mine.  Further examination reveals the device is accruing miles while I am standing still!   I think about turning around several times, but not knowing how close I am, I would hate to find out later that I turned within yards of the mine. 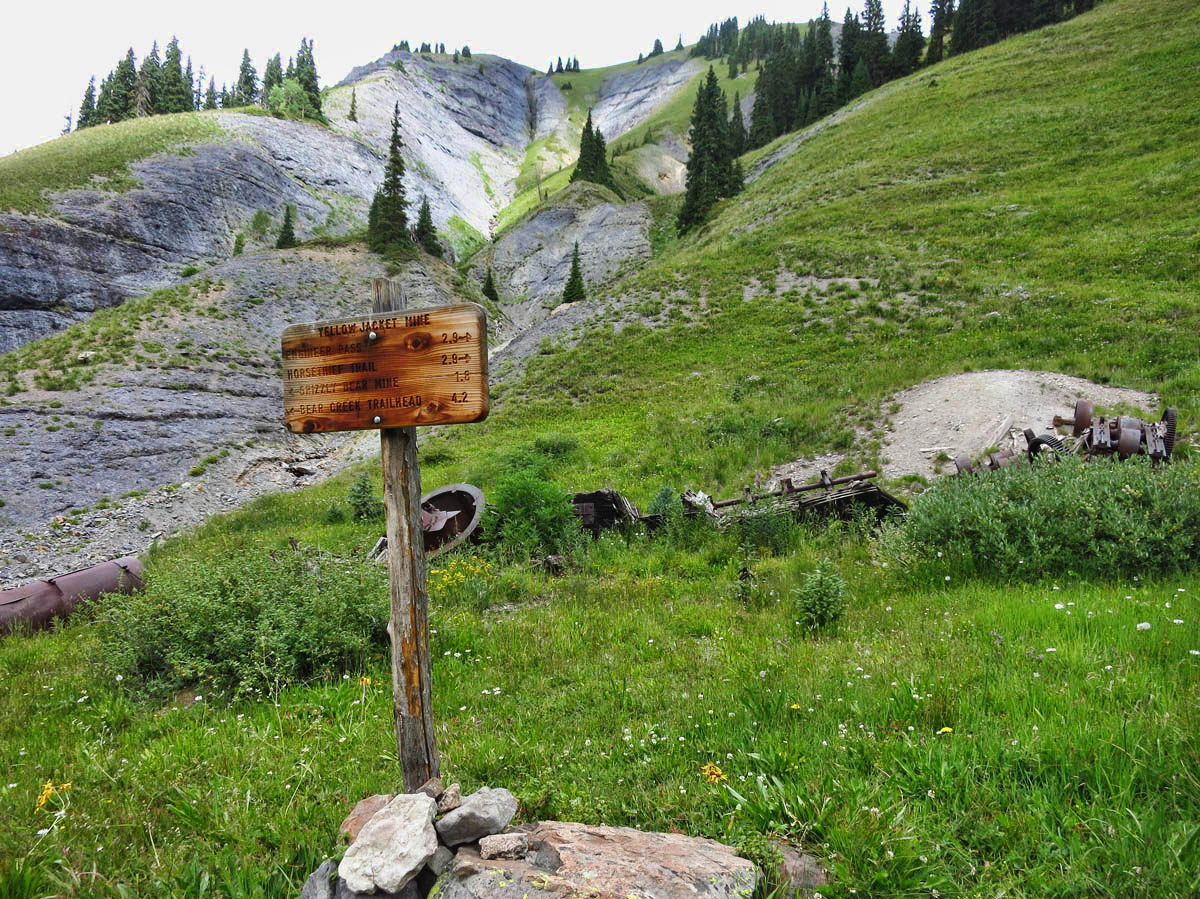 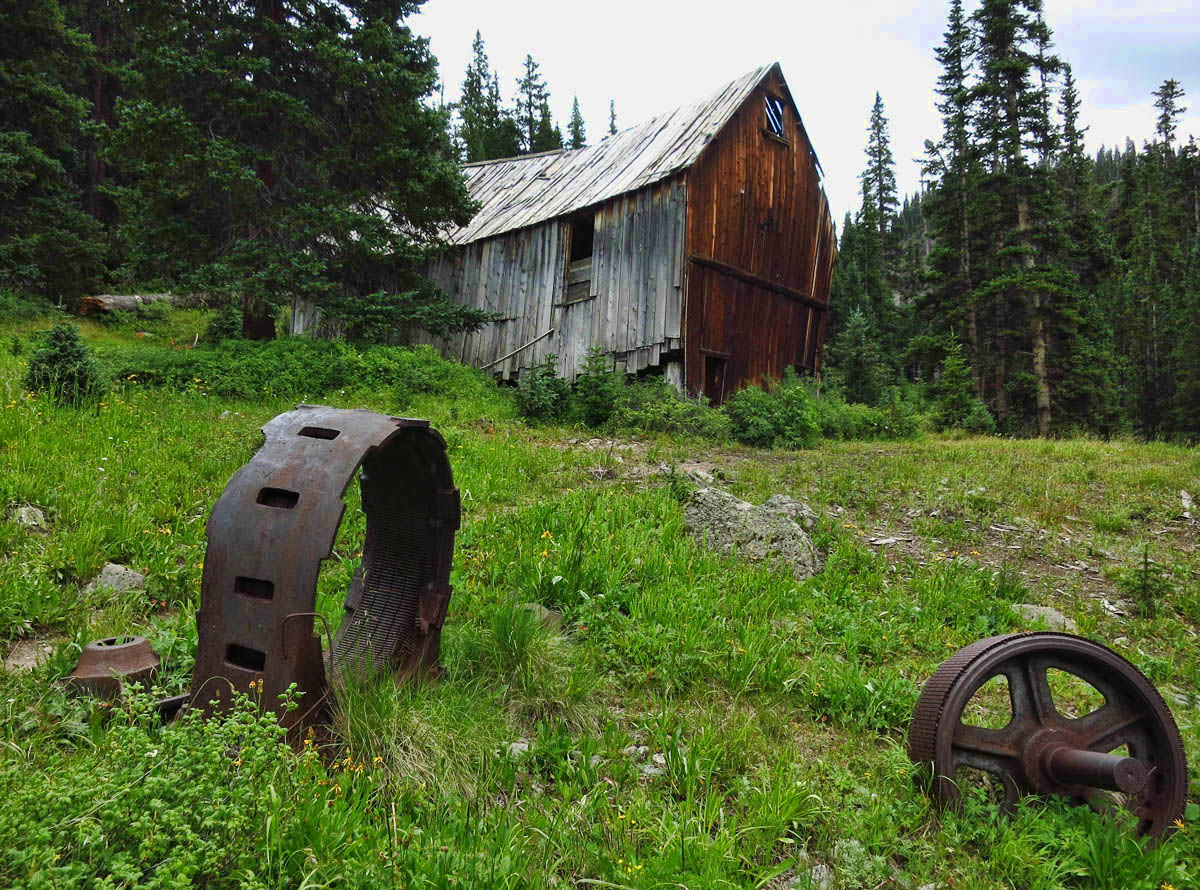 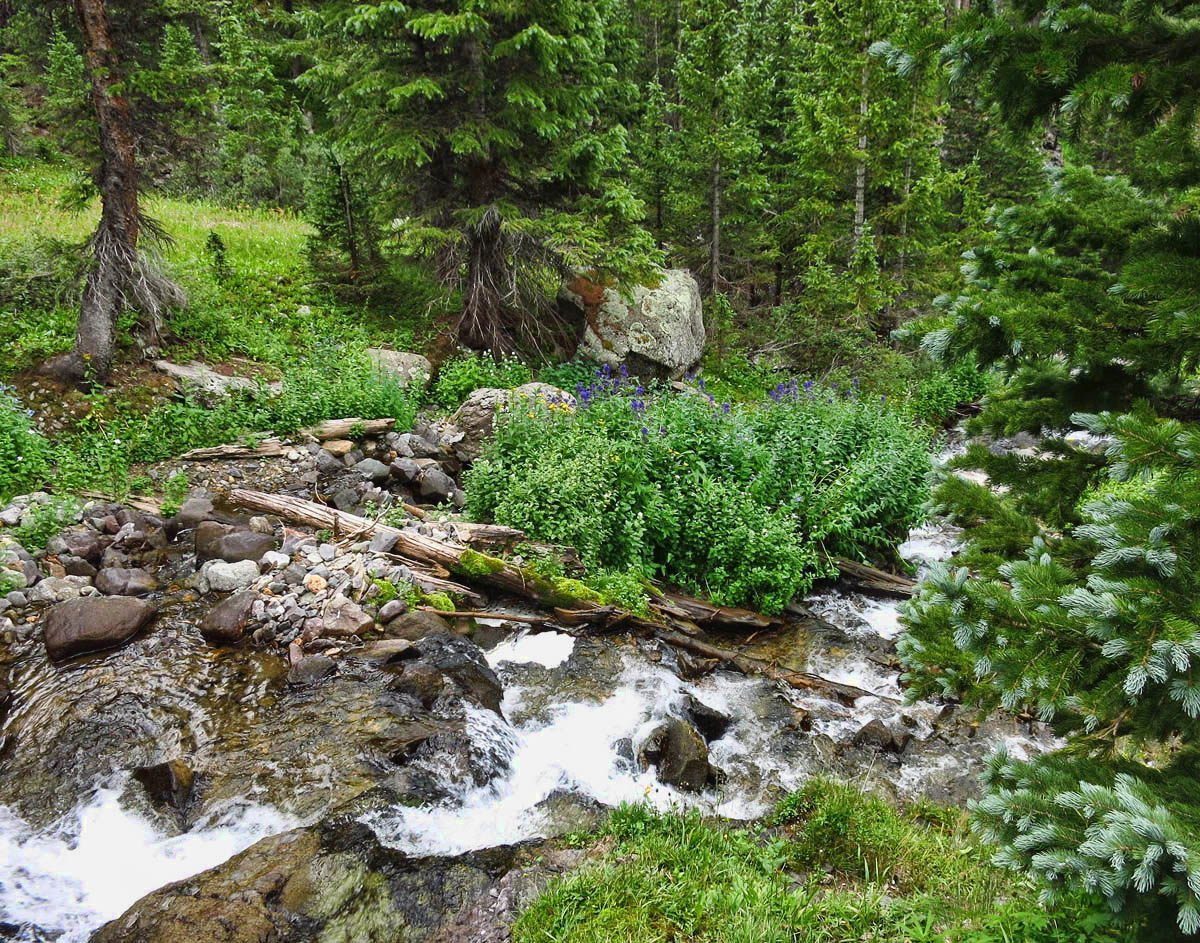 My lunch spot. Hard to see, but there is an “island” of blue wildflowers in the middle of the creek.

Finally, I recognize the old miner’s shack from pictures I have seen, and feel a great sense of relief at having made it.  I enjoy lunch on the edge of the creek, almost deafening in its roar while tumbling down a series of rapids.  I don’t tarry too long, though, as I can see thunderhead clouds moving in. 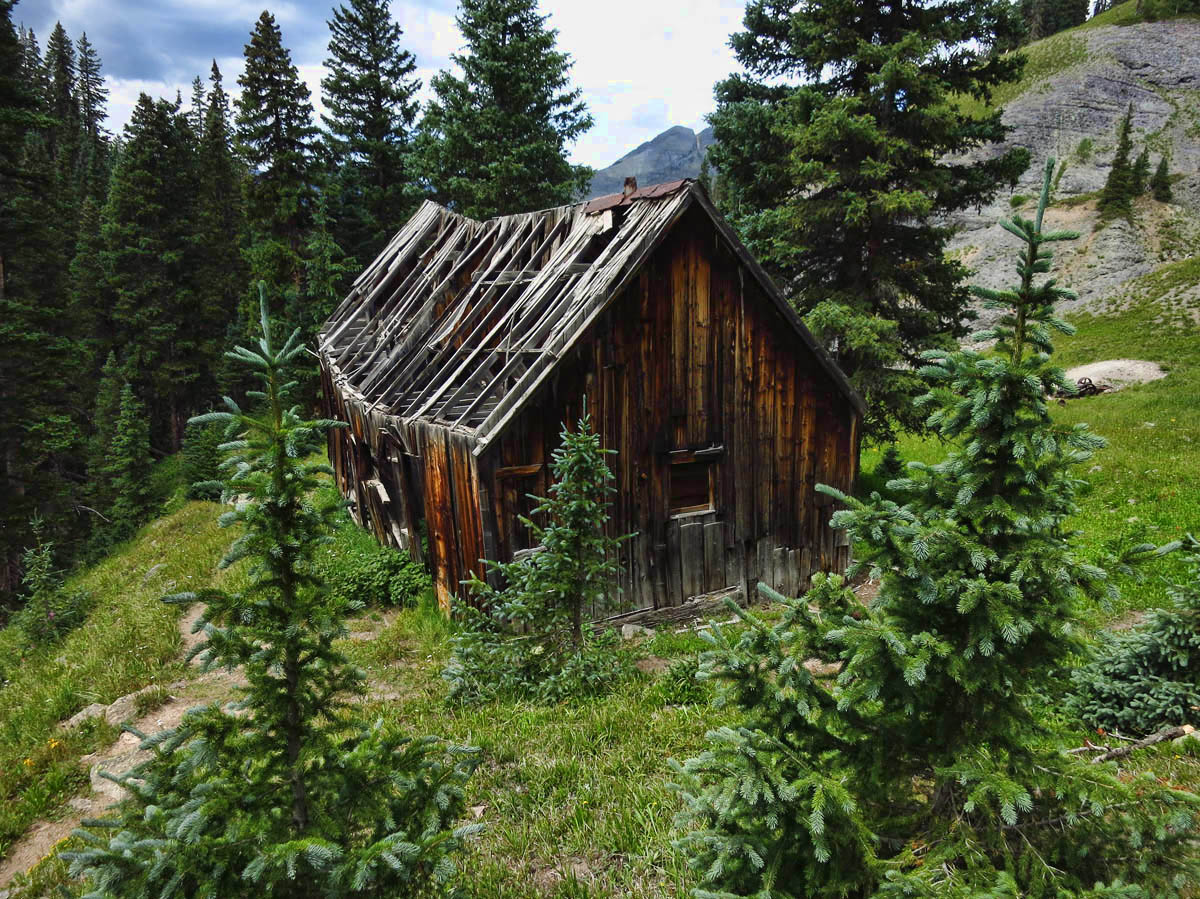 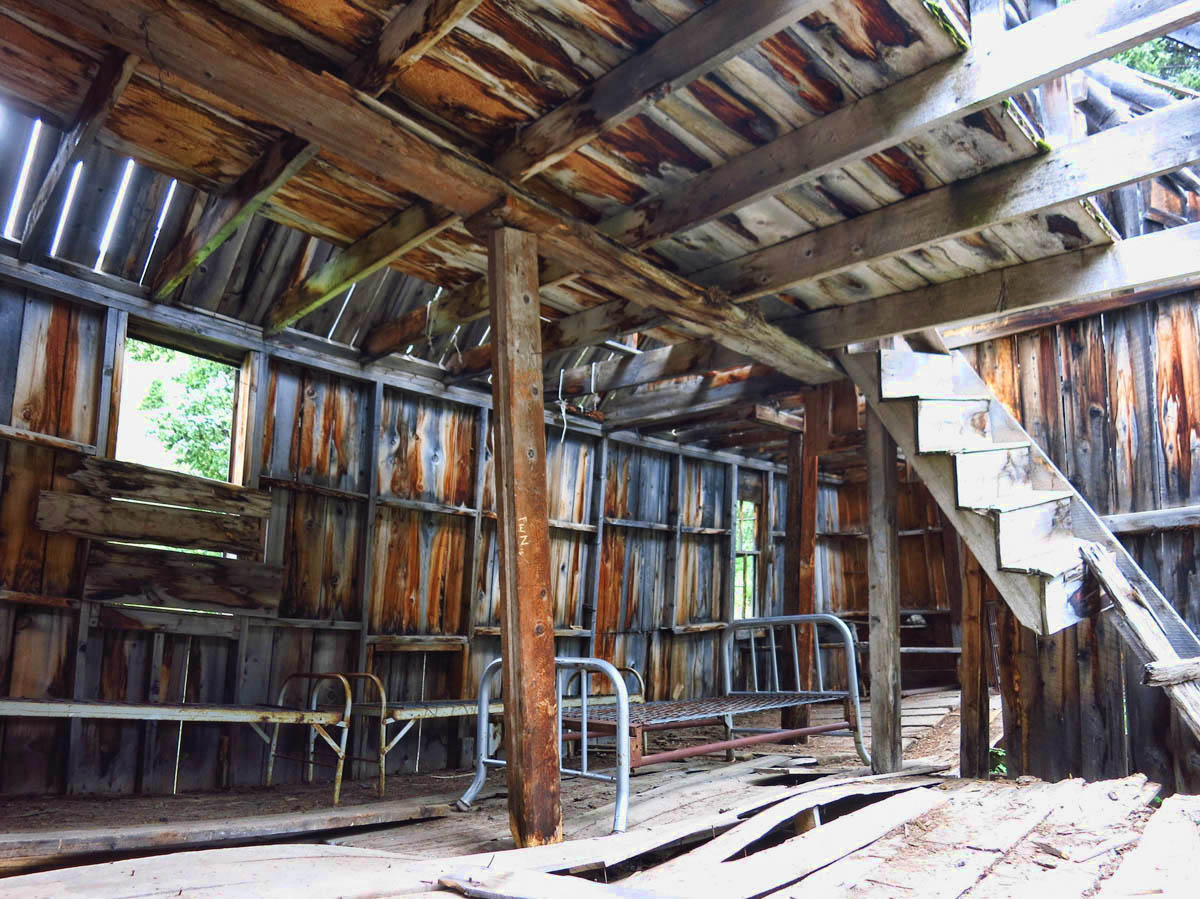 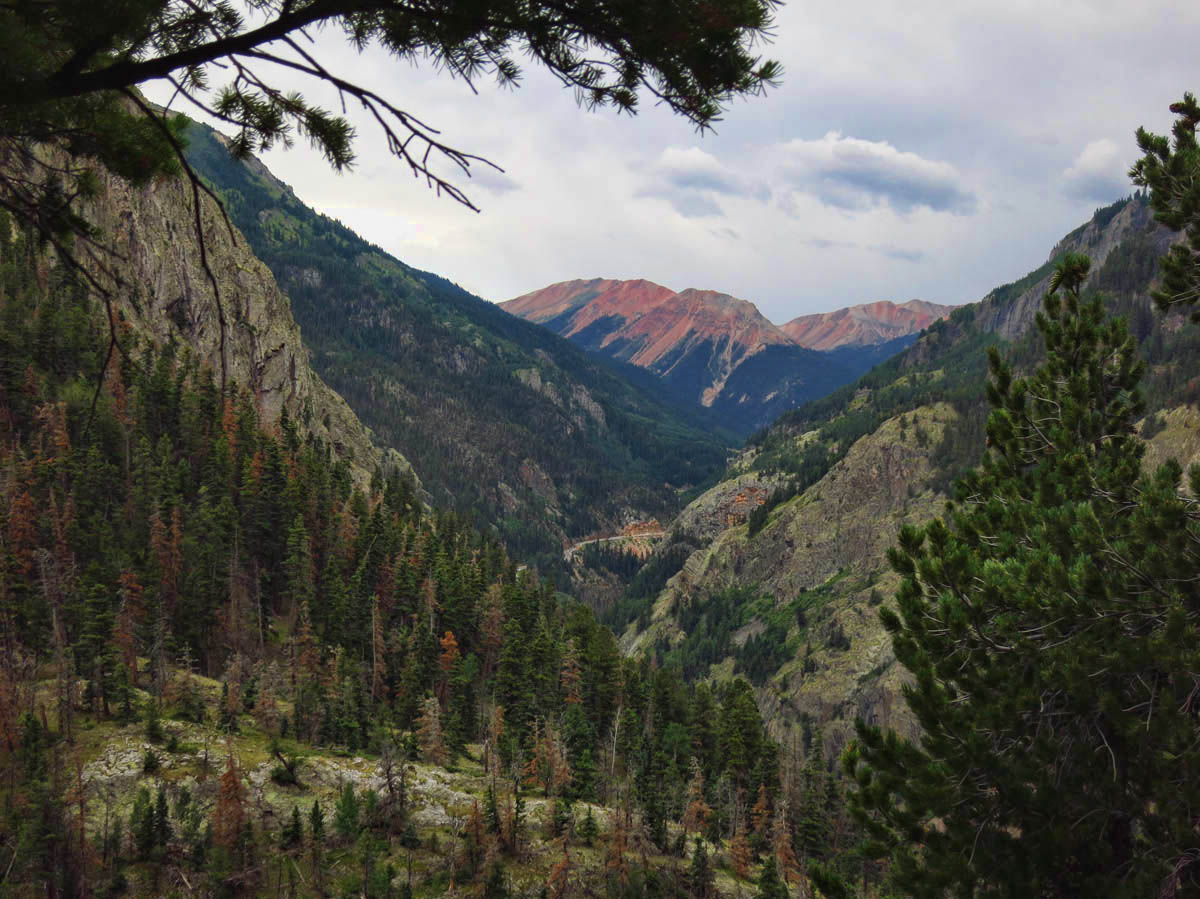 View of beautiful Red Mountains across the canyon. 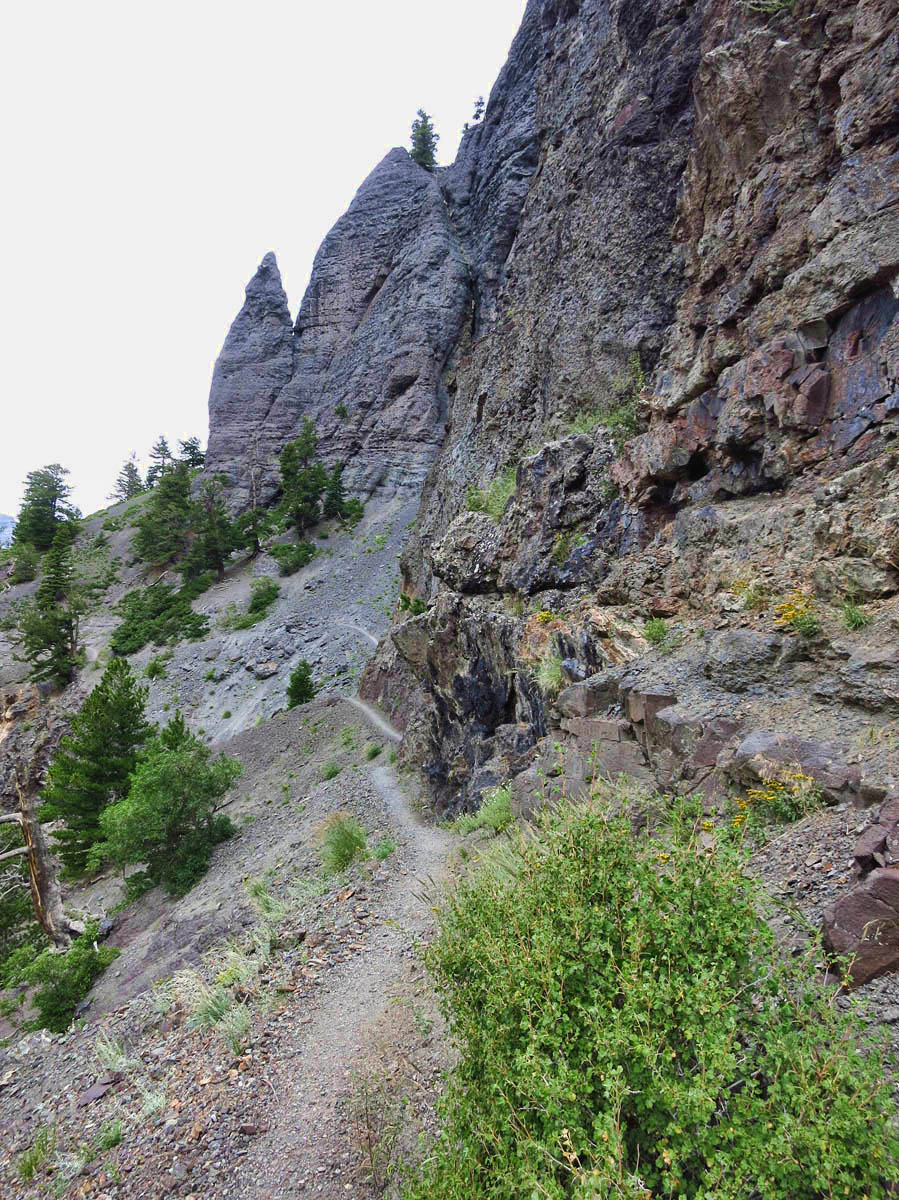 By the time I reach Grizzly Bear Mine on the return, the sound of thunder is getting louder as it moves my way.  I pick up the pace until I am almost jogging down the switchbacks.  I don’t want to get caught in a lightning storm on the exposed part of this trail!   I make it as far as the tunnel overpass on Highway 550, when the skies open up and the rain comes pelting down.   By the time I run across the parking lot, I am soaked.

But guess what awaits me in the car, left over from breakfast?   A half of a Mouse’s Chocolates Scrap Cookie! When I first arrived in Ouray, I compared it to “Life’s own version of the Scrap Cookie.” All my favorite types of “candy” (gorgeous hikes, breweries, inviting hot springs, good friends) baked into one “cookie” (Ouray.)  So as I sit in the car in the pouring rain, I savor my last bite of Utopia…unraveling one tasty morsel at a time.