The Black Canyon of the Gunnison National Park is only a small part of the 48 mile long gorge, carved over 2-billion years by the mighty Gunnison River, a tributary of the Colorado River.   The National Park protects the steepest and deepest 14-mile stretch of the gorge.    The park is bracketed on both ends by recreational areas; Gunnison Gorge to the west, and the larger Curecanti National Recreation Area the east.  Curecanti is formed by a series of three dams; Blue Mesa Dam, Morrow Point Dam, and Crystal Dam, each creating reservoirs of the same name.  The largest of these is Blue Mesa Reservoir, Colorado’s largest body of water. 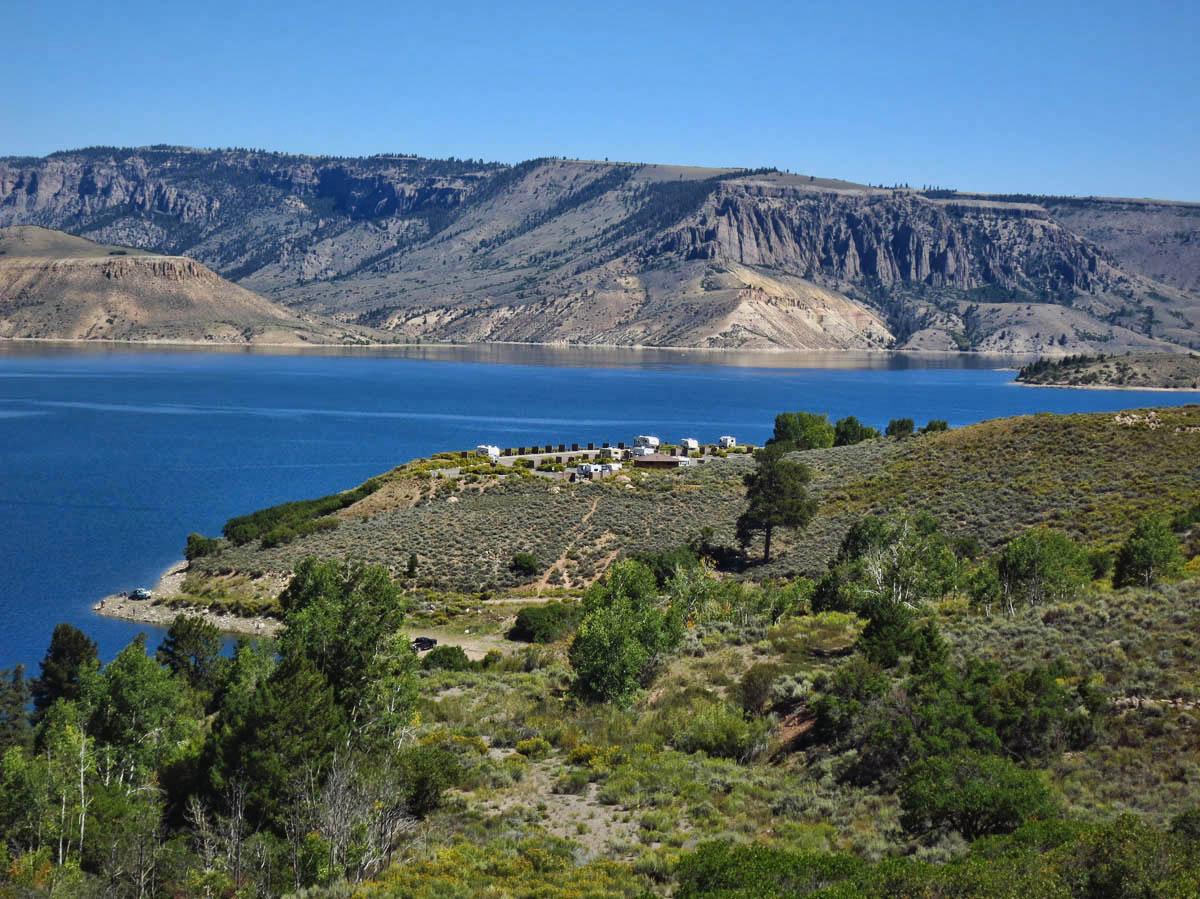 As I continue to work my way around my counter-clockwise loop through southwestern Colorado, I want to explore some of the Curecanti National Recreational Area.  Jim, Gayle, and Debbie have spoken often about a boat tour they took back in 2012 along the Morrow Point Reservoir, through the Black Canyon.  I learn that this is the last weekend for this boat trip, so I call for reservations and get in just under the wire. 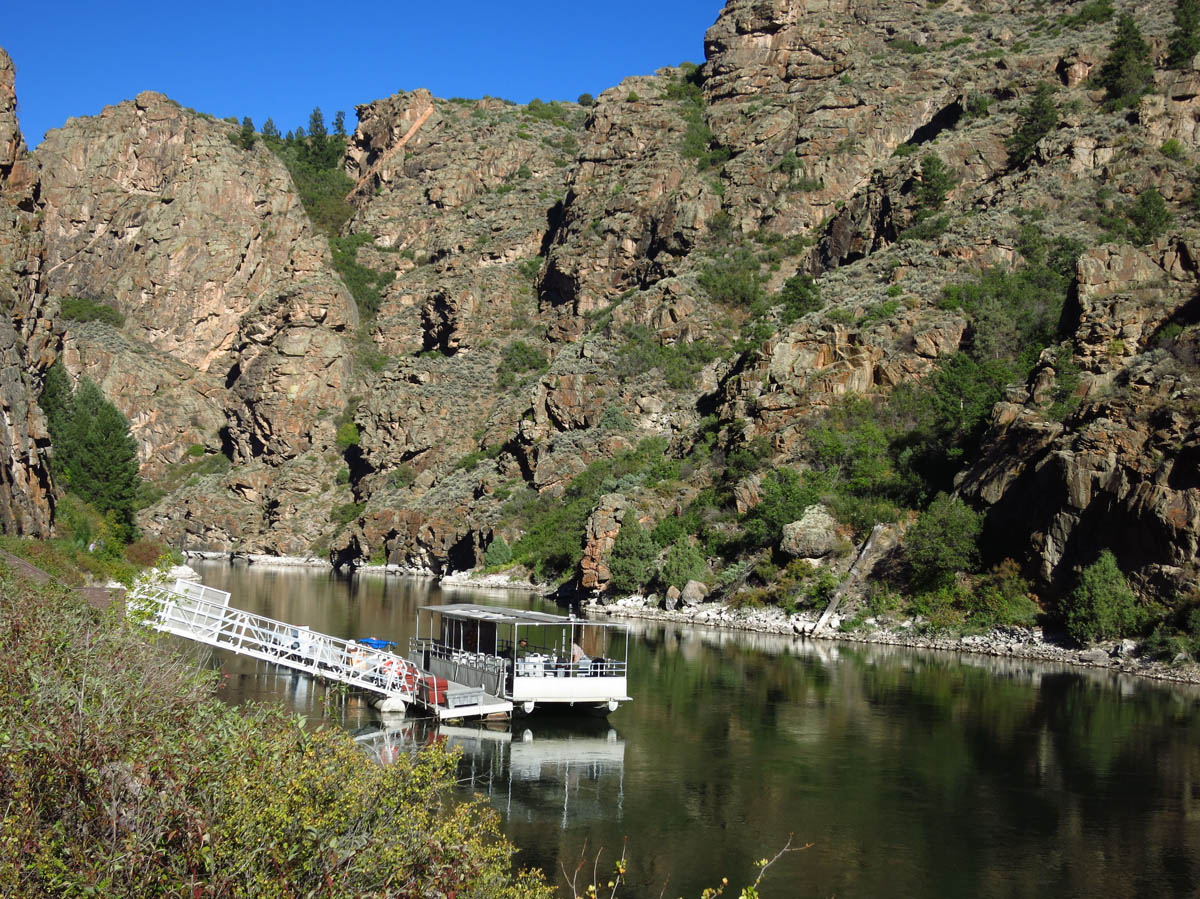 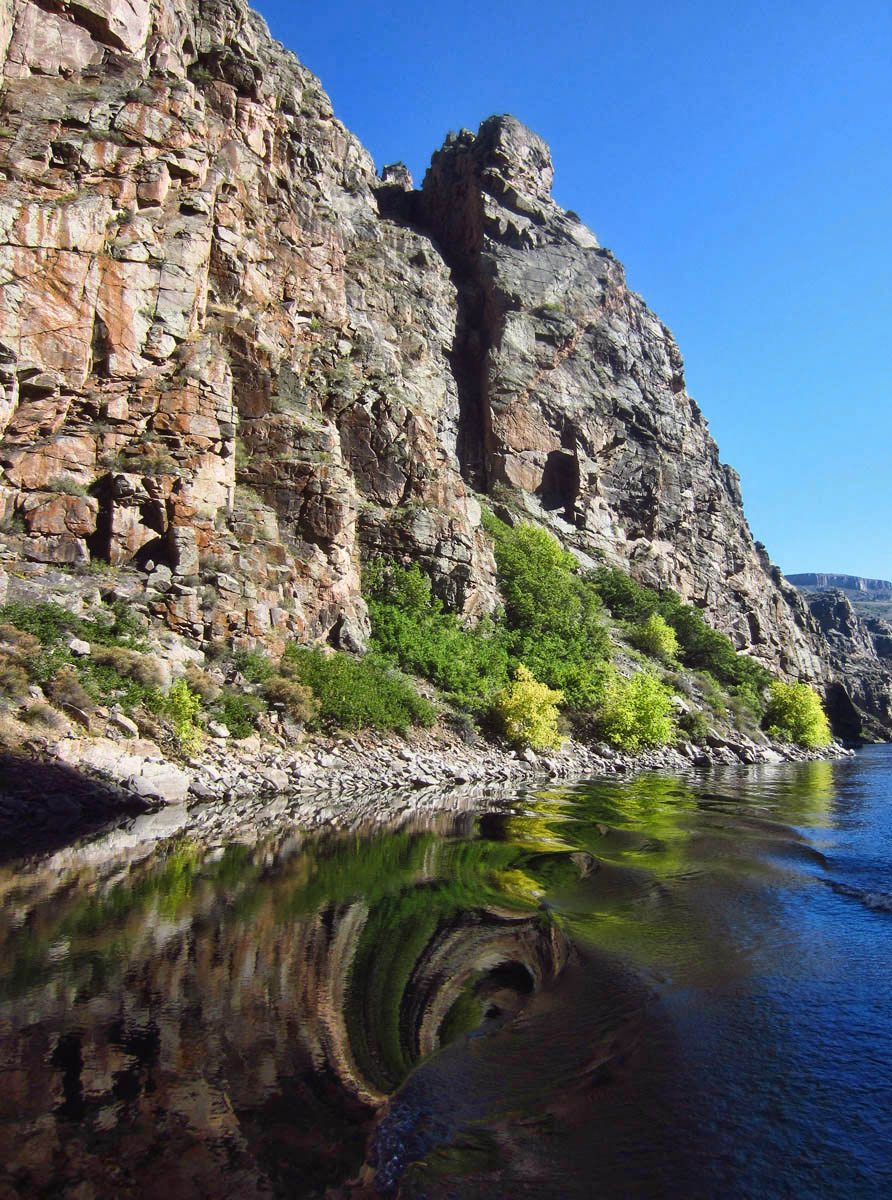 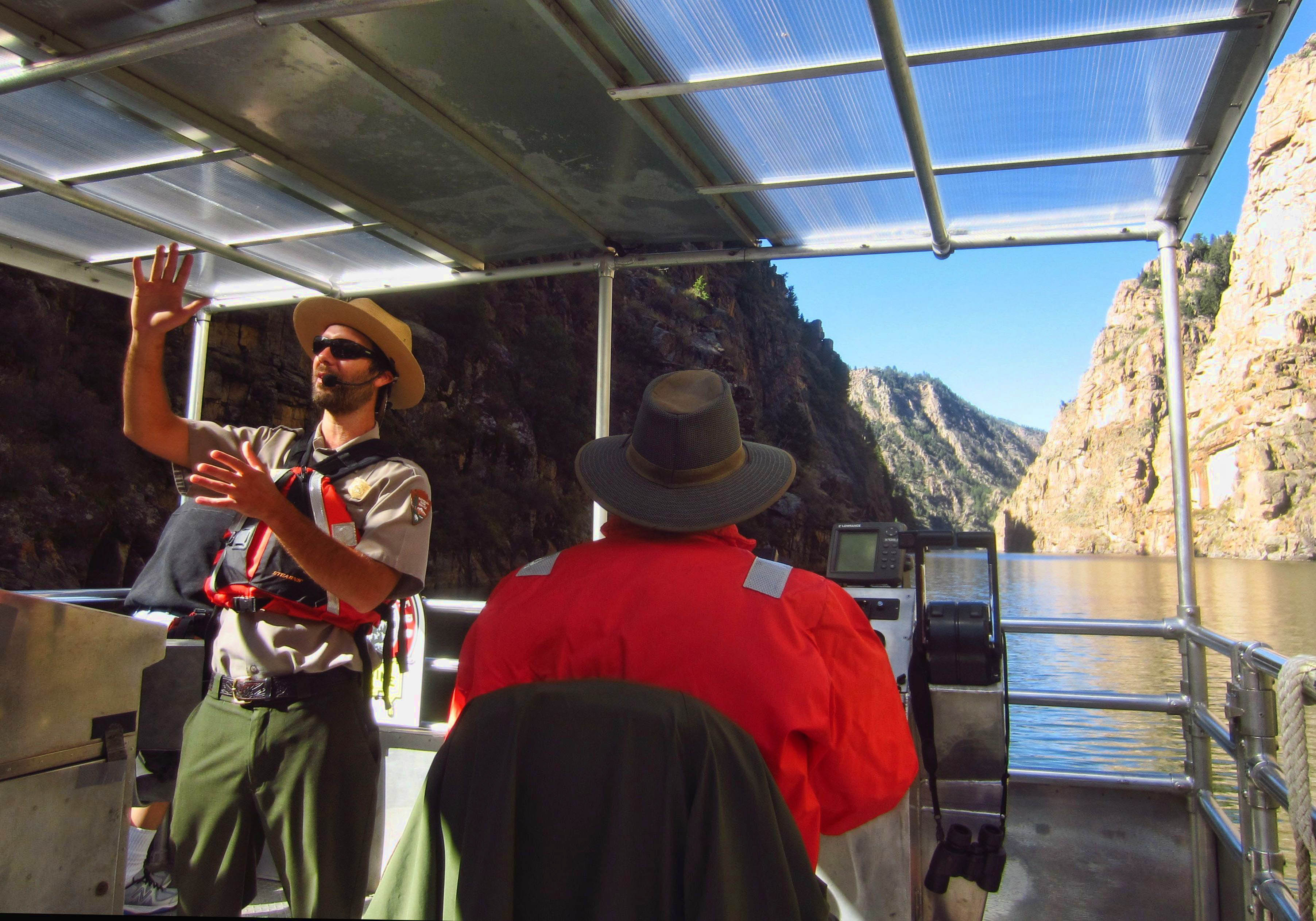 Ranger describes history, but it is Captain who spots bald eagle.

Lake Fork Campground near Blue Mesa Dam is the most convenient place to park it while I explore this area.   Even though it is an asphalt parking lot with what amounts to enlarged side-by-side parking spaces, it offers 180 degree views of the Blue Mesa Reservoir.    It’s only a mile to the Pine Creek turn-off to reach the parking area for the boat tour.   That’s the easy part.  Then, it’s a 232 stair decent to the river, and a mile walk along the old railroad bed to reach the boat launch. 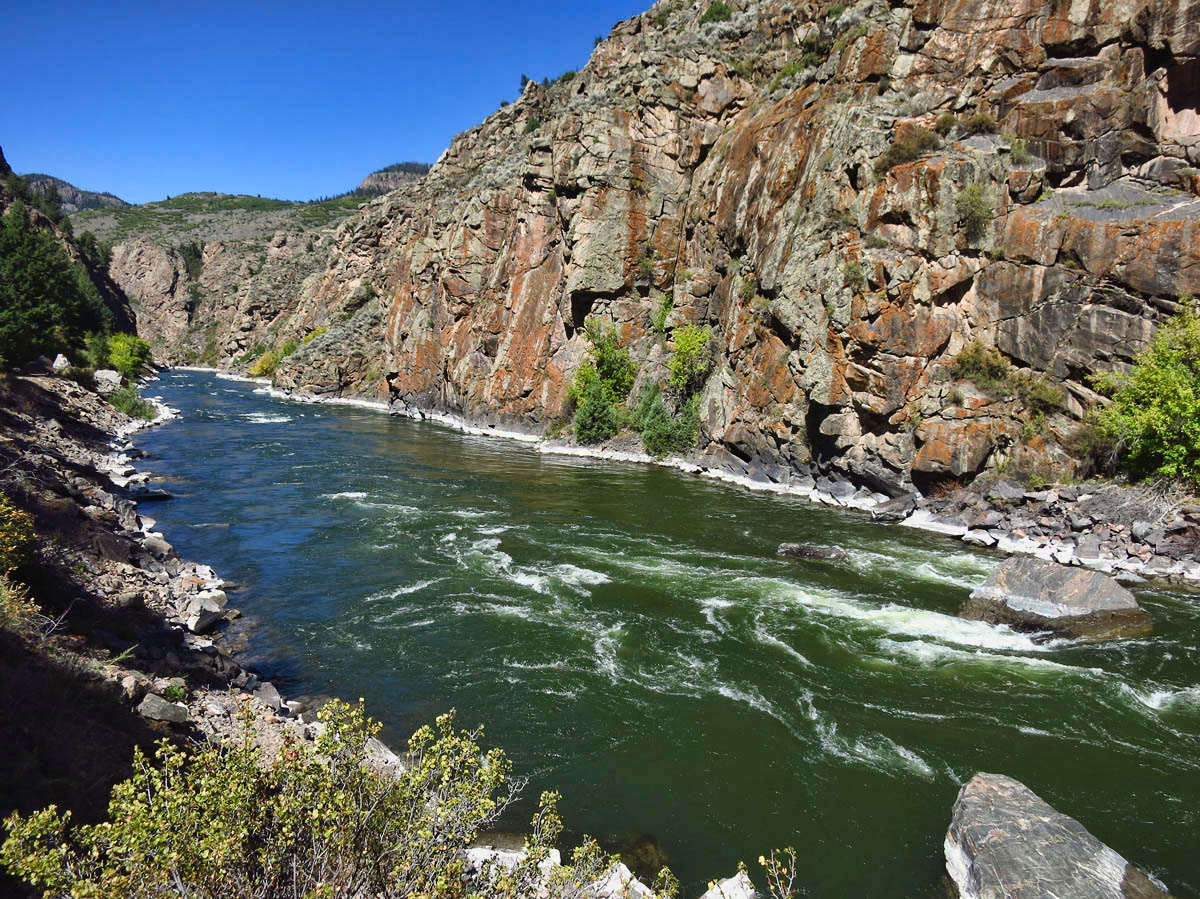 Hike down to the boat launch requires 232 stairs and a mile walk along the river. 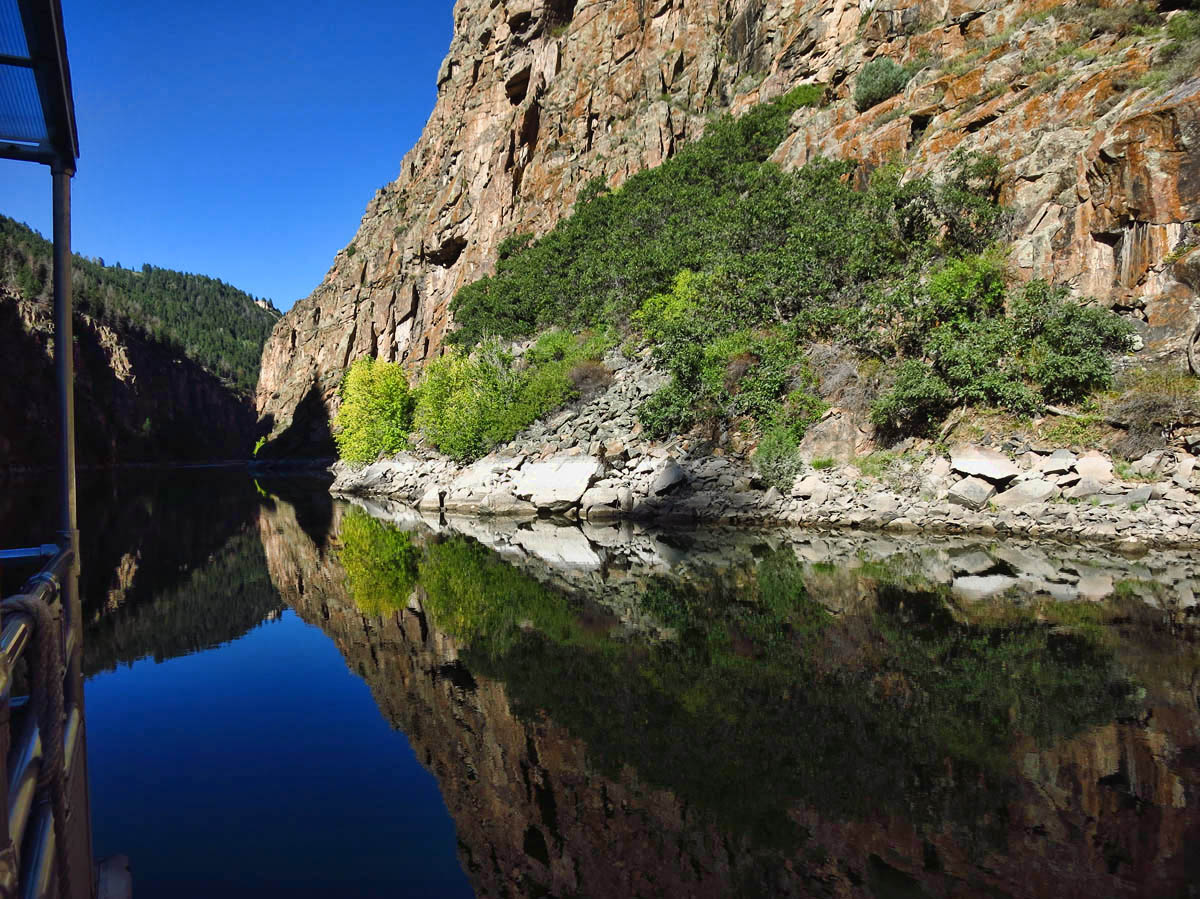 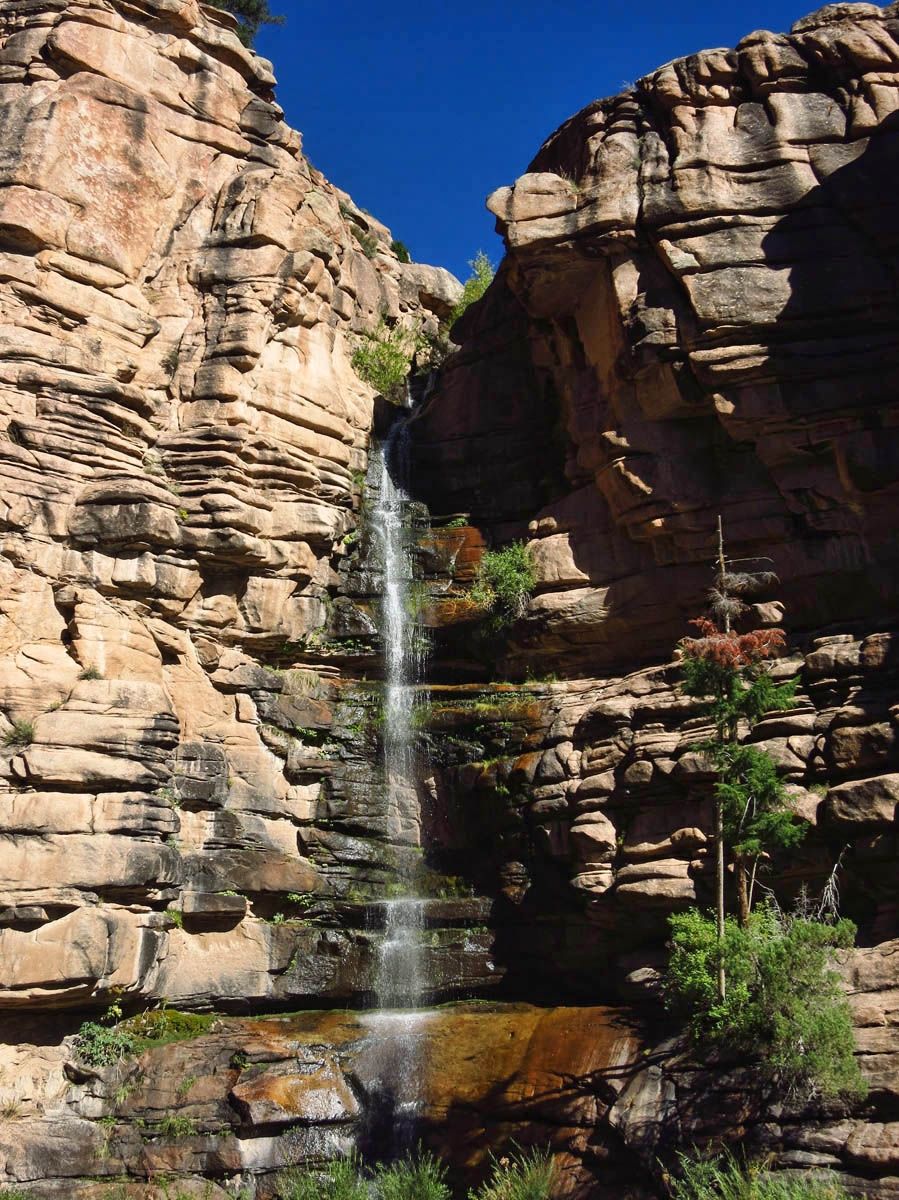 This 90 minute scenic boat tour travels seven miles up the Morrow Point Reservoir to the eastern end of the Black Canyon of the Gunnison.   This stretch of the canyon follows what was once the northern bank of the Denver & Rio Grande Railroad, “Scenic Line of the World.”   The Black Canyon section of the 3-ft narrow gauge line was started in 1880 by that same “General Palmer” who has a hotel named for him in Durango.  It was constructed through the winter by Irish and Italian immigrants, who often descended into the canyon via ropes with nitroglycerin packs on their backs.  The railway was rerouted in 1940, and most of the track is now submerged following the damming of the river. 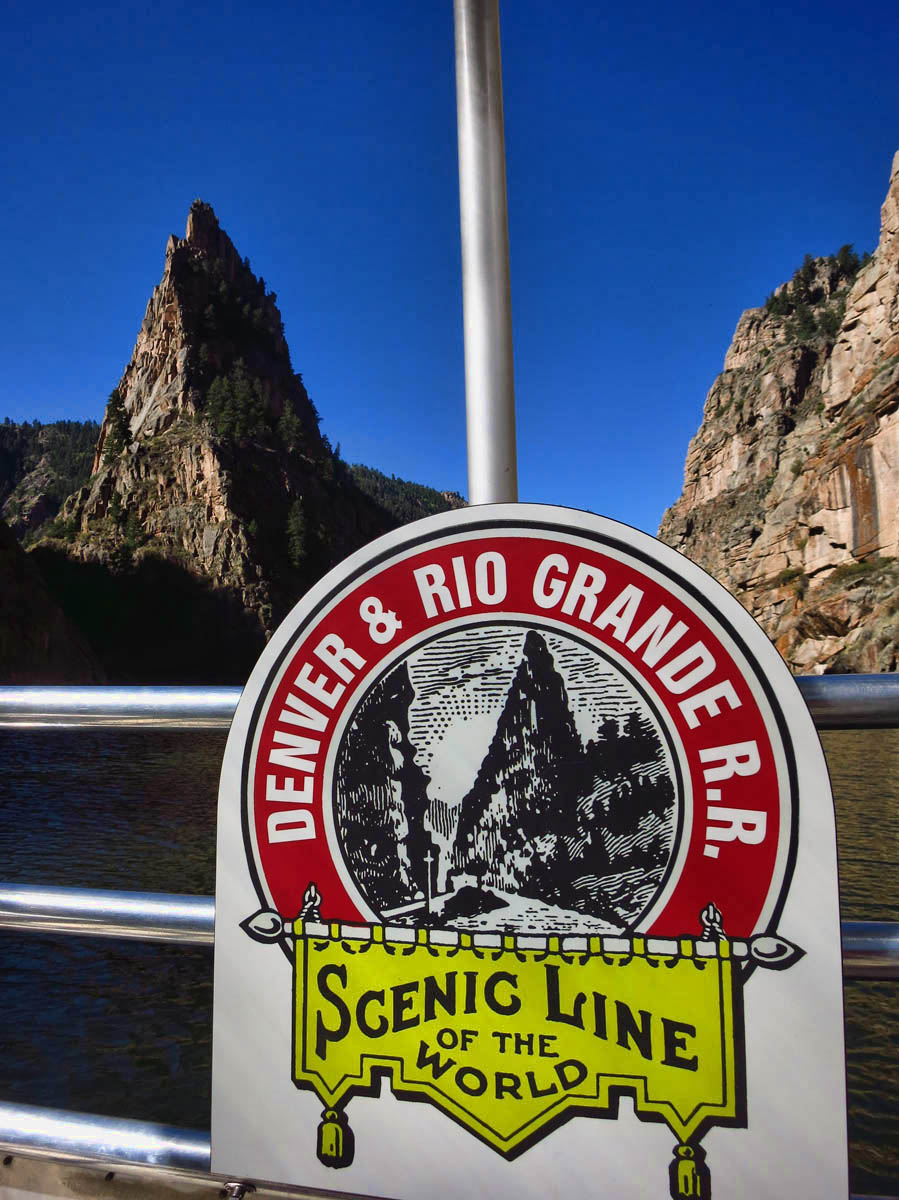 This is the iconic Curecanti Needle, 700 ft granite spire, which was featured in the logo for the Durango & Rio Grande RR. 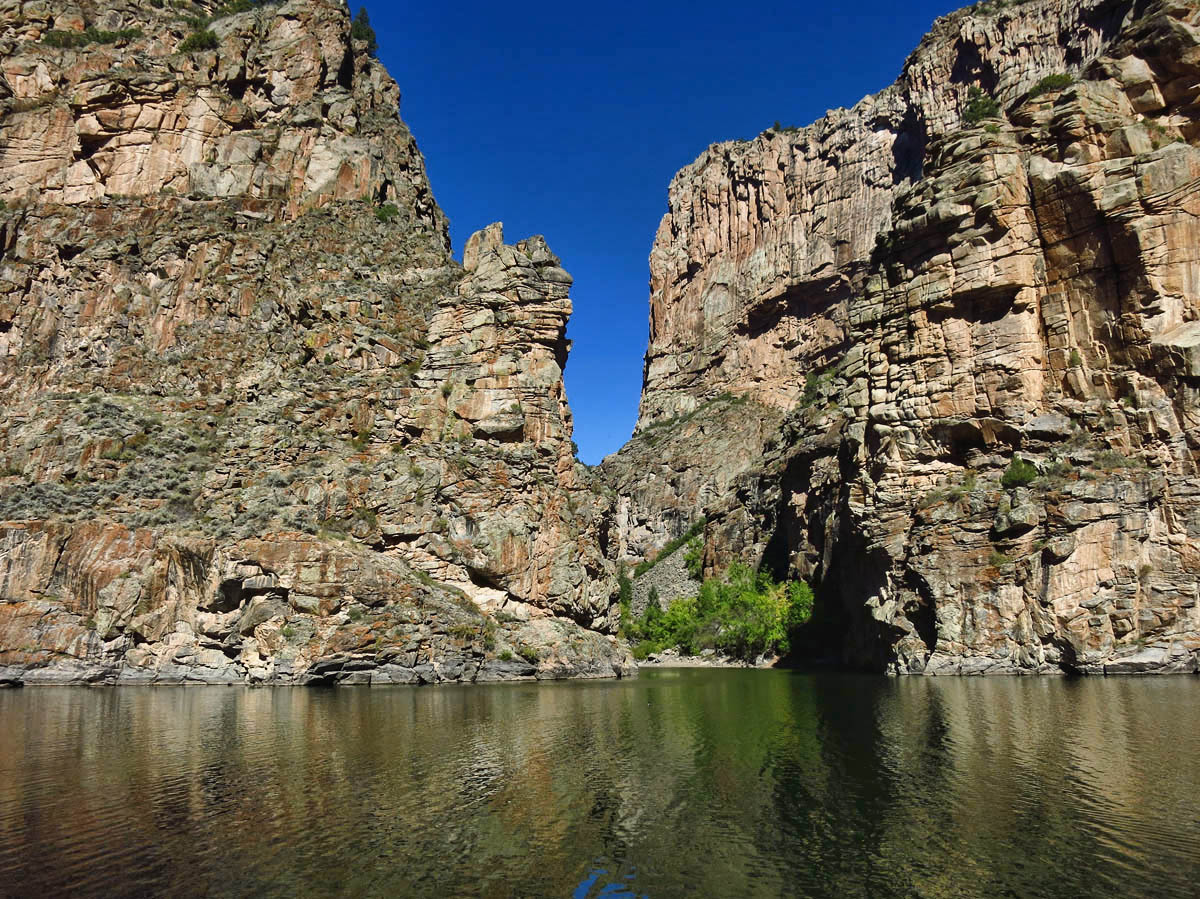 The mouth of Curecanti Creek. I hike down to this cove the following day. 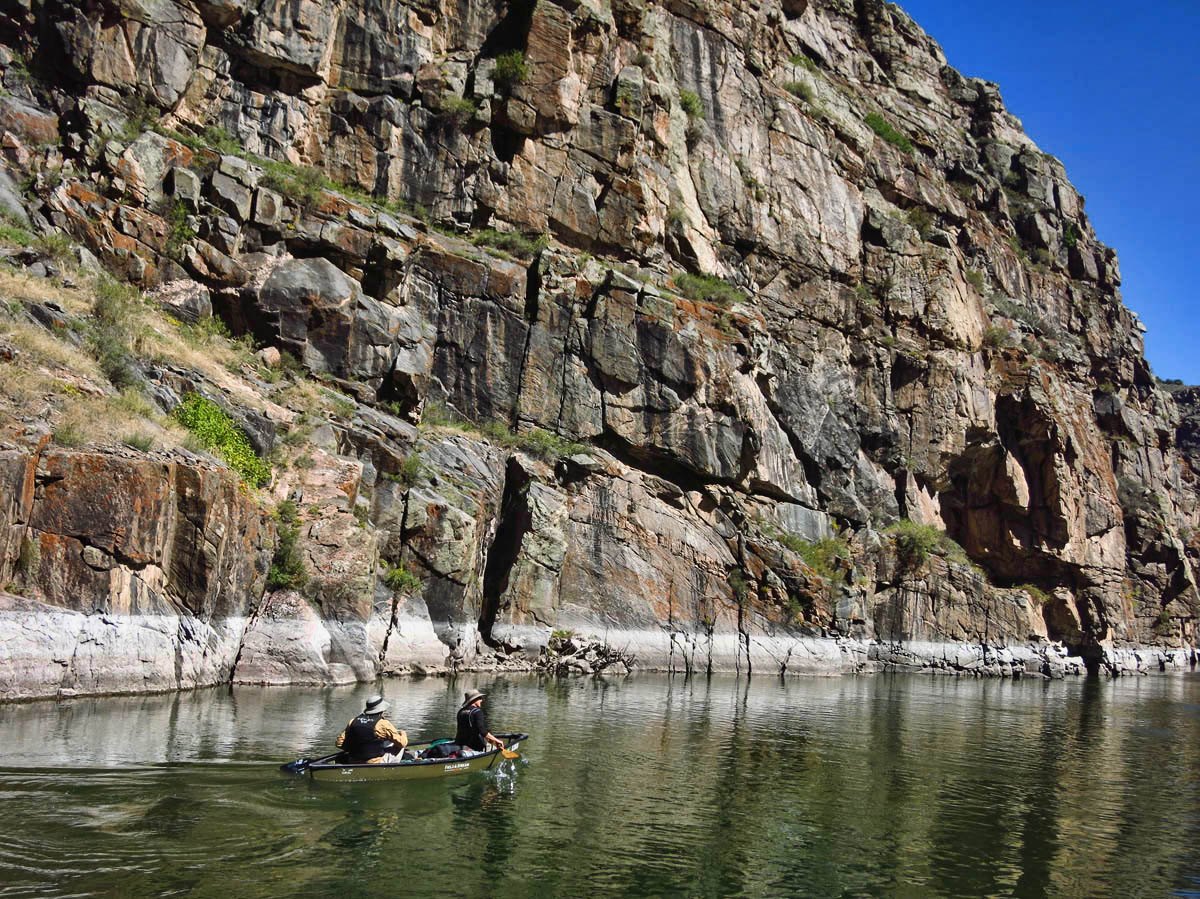 Canoeists come from their overnight camp at the mouth of Curecanti Creek.

“We entered a gorge, remote from the sun where a rock-splintered river roared and howled ten feet below the track…There was a glory and a wonder and a mystery about that wild ride that I felt keenly.”  ~Rudyard Kipling, 1889 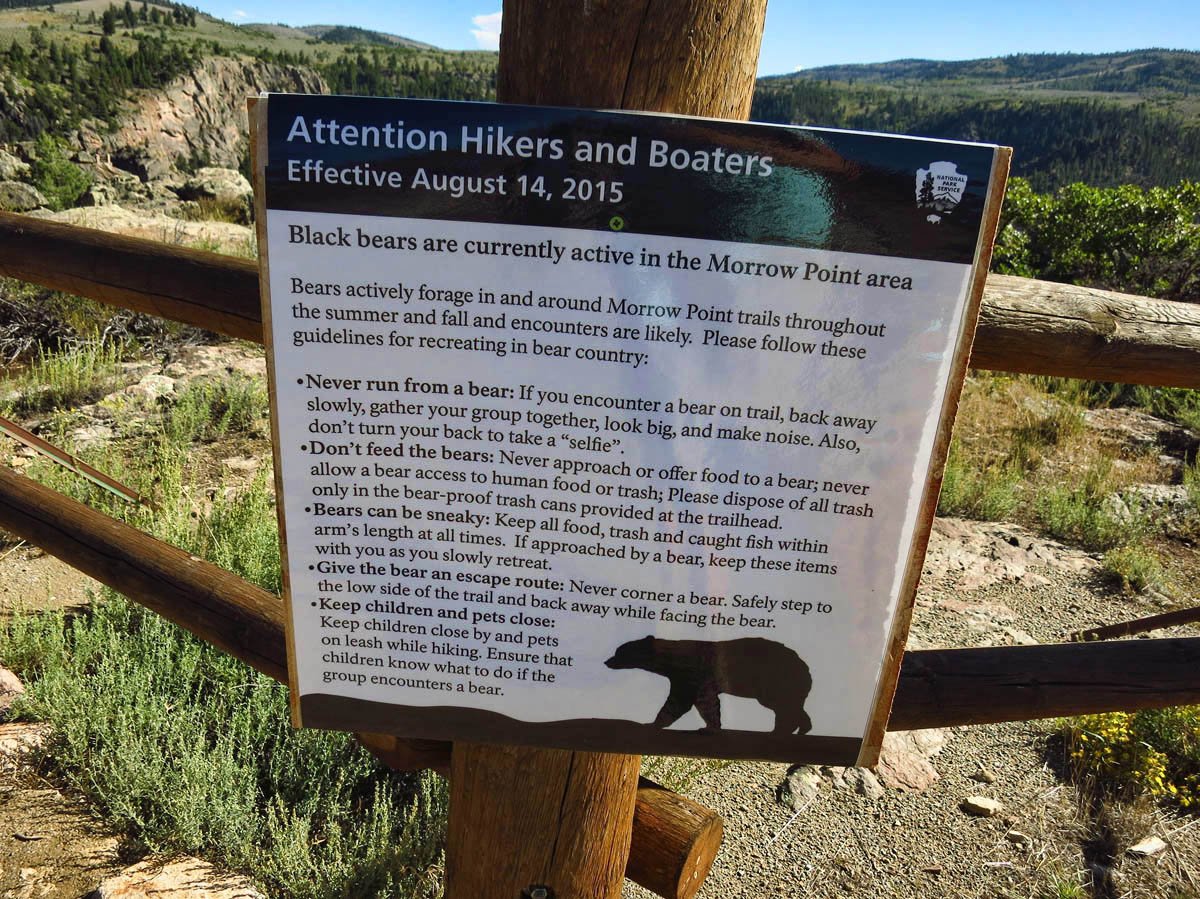 This sign cracked me up, more specifically “Don’t turn your back to take a ‘selfie.” I’m sorry they have to say that… 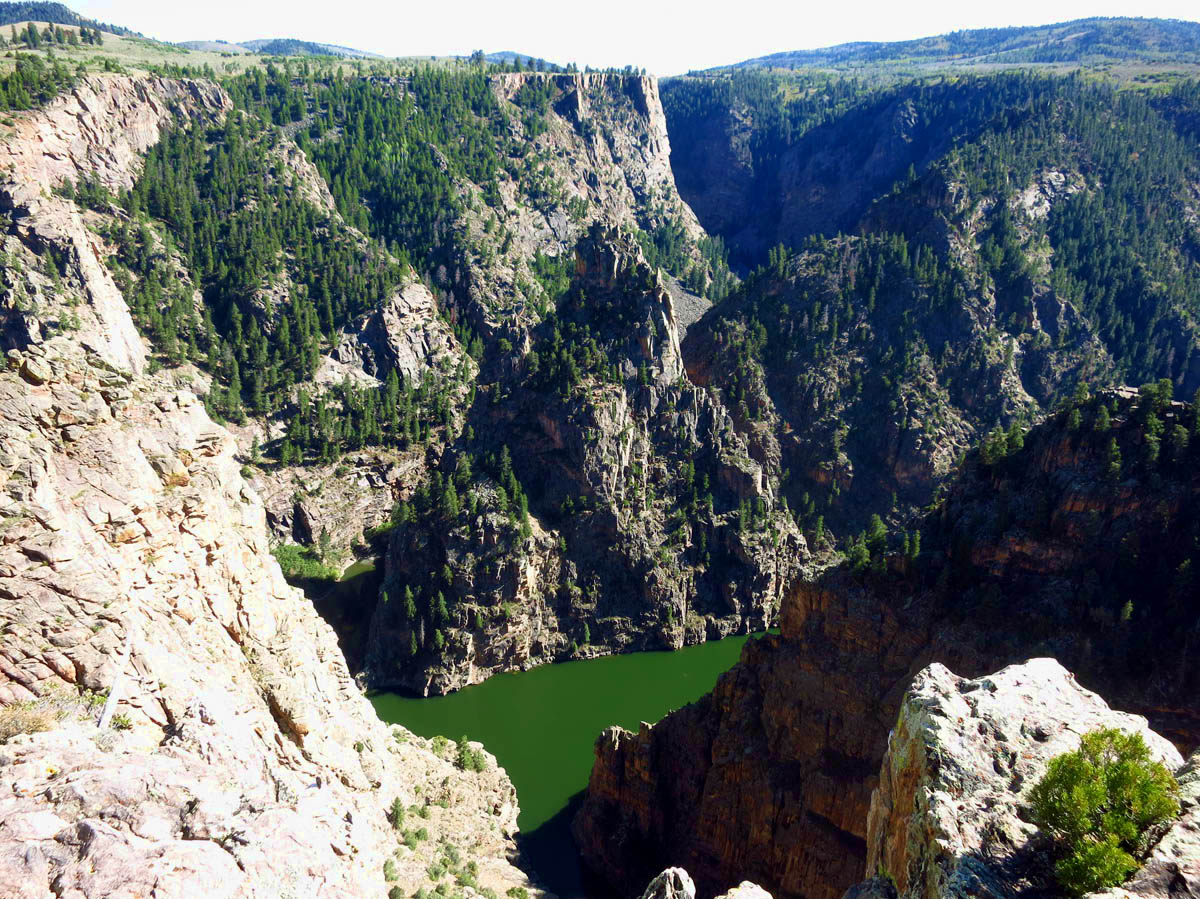 Overlooking Curecanti Needle from the rim. 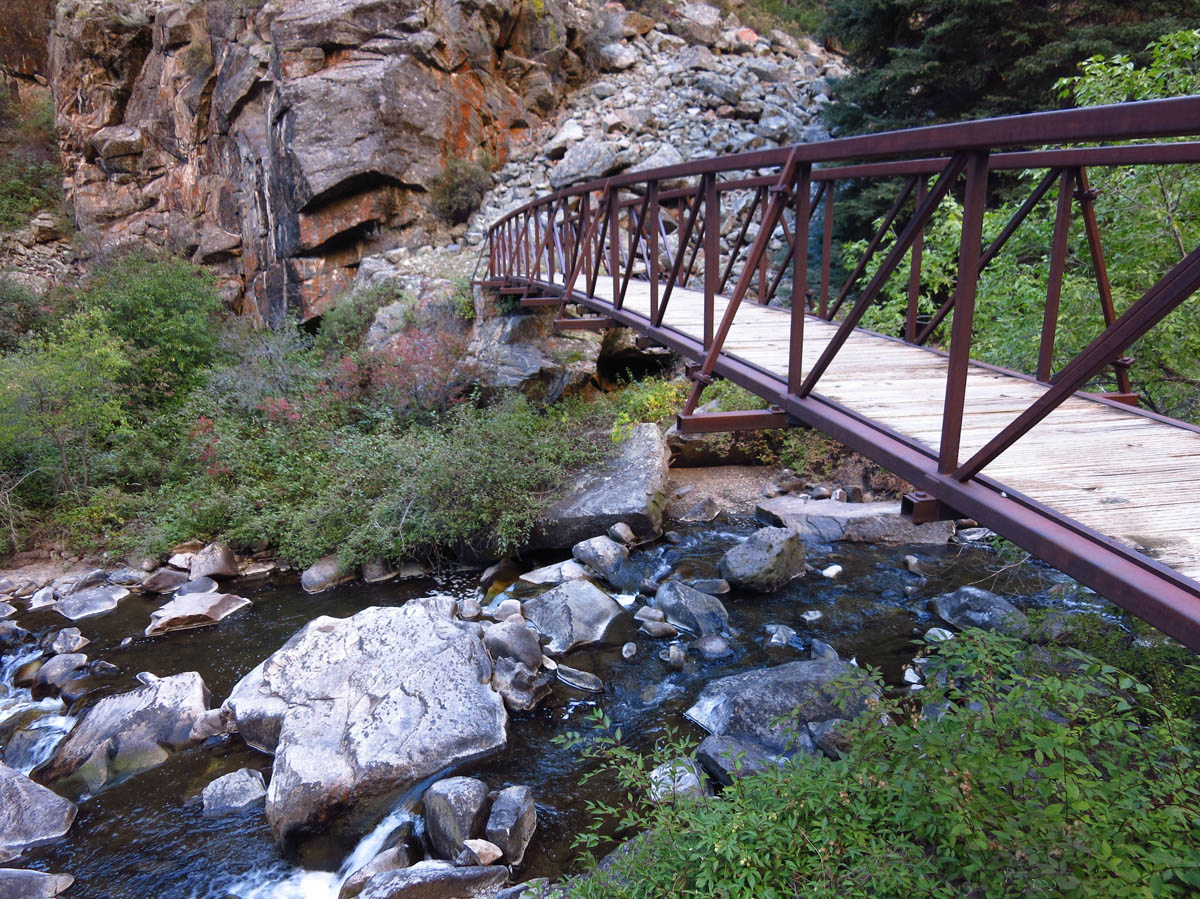 Following several switchbacks, the trail skirts the canyon rim across the creek, then begins a steep decent to the mouth of the creek.  It follows the rocky bank, past “refrigerator rocks” where cold air comes out of some small caves.  The trail crosses the creek several times, but on elevated bridges high above the water line.  There are a couple of backcountry campsites along the way.  Once at the mouth of the creek, the trail ends, and there’s nowhere to go but “up.”  😉 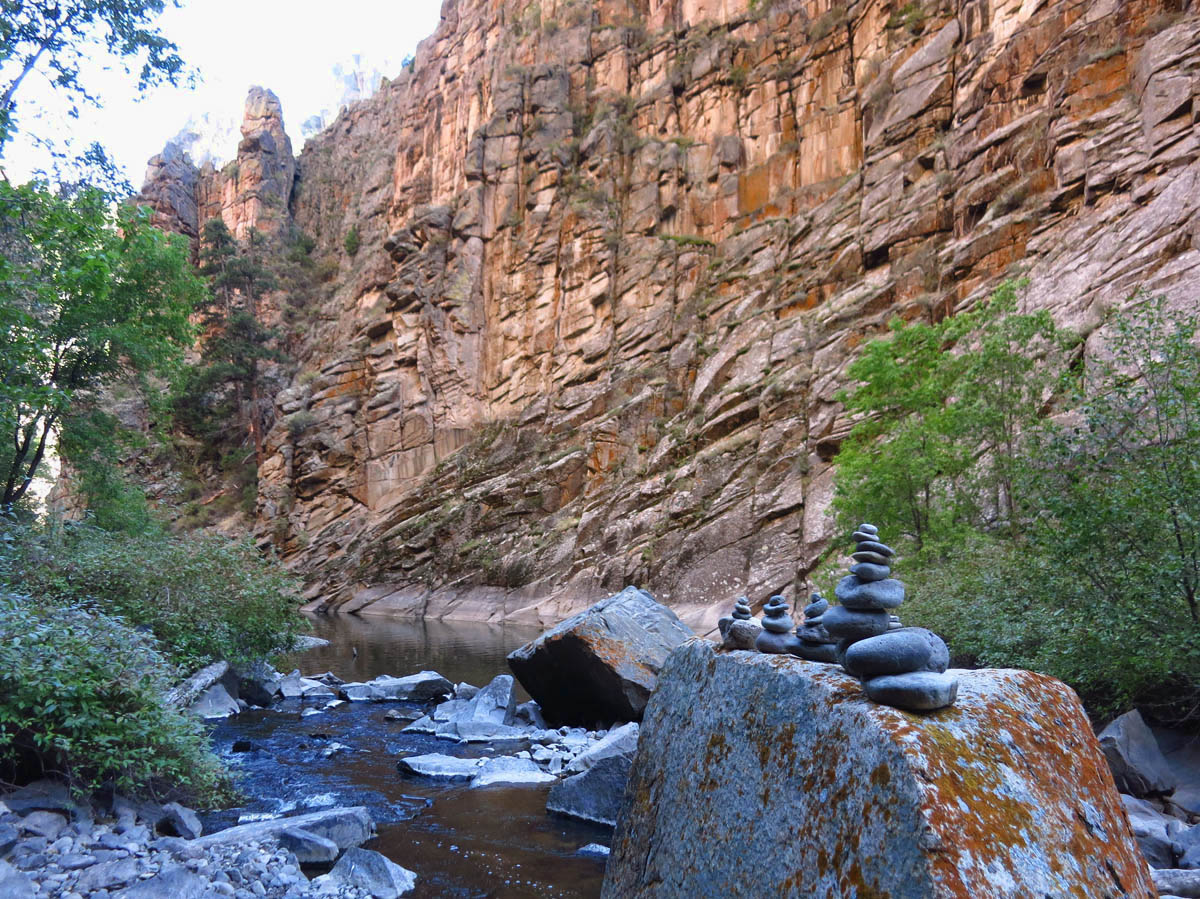 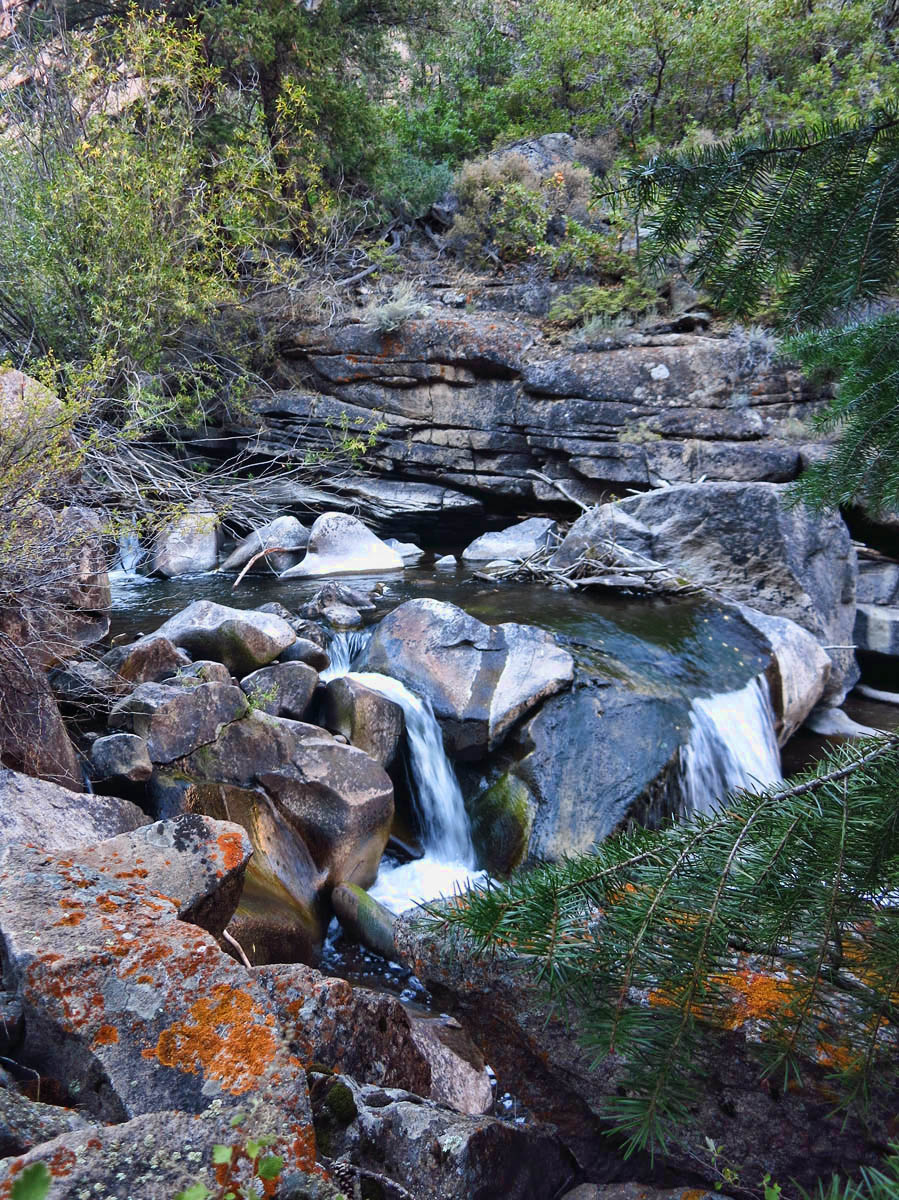 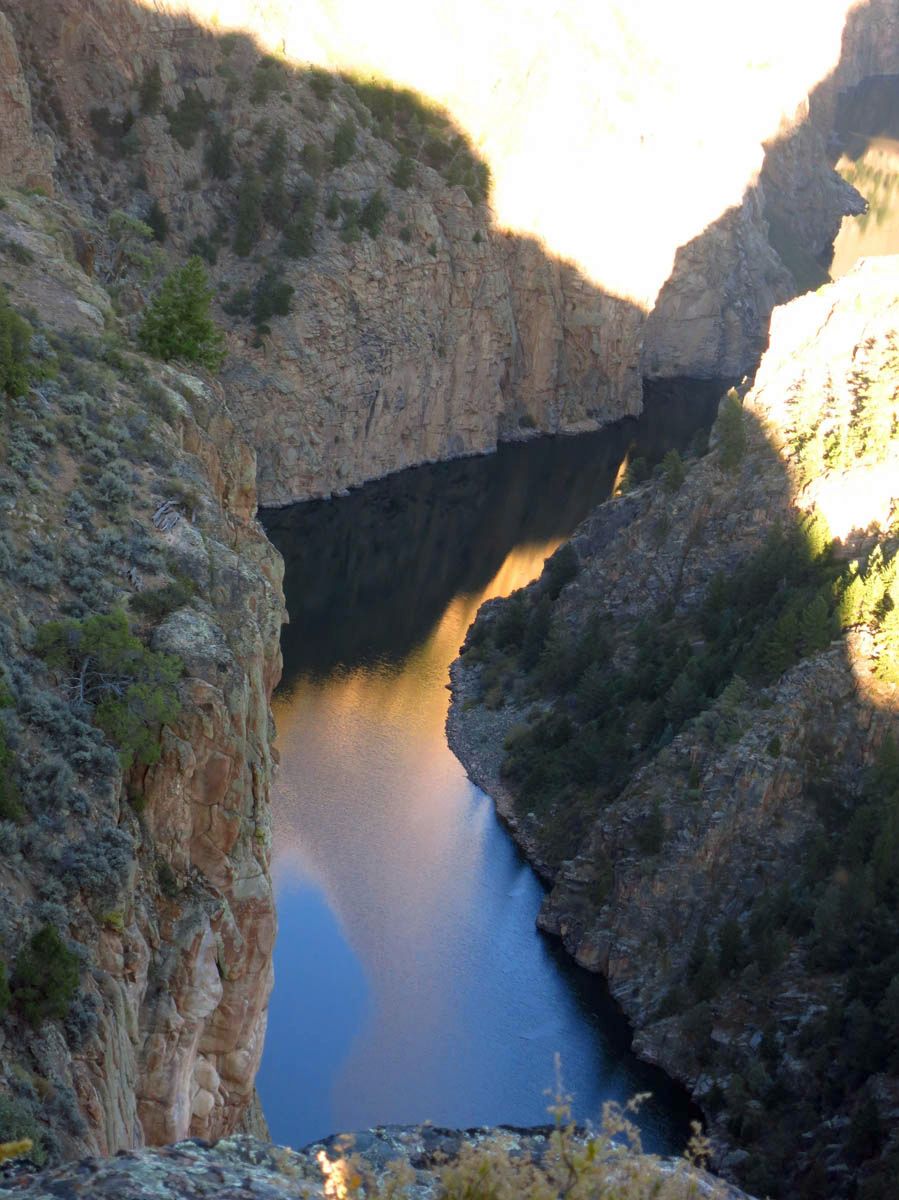 The walls of the gorge get higher, steeper, and more narrow further east as I move on to explore the Black Canyon of the Gunnison National Park, named for only a brief few moments of daylight that reach the bottom of the canyon each day.   The steep, stark, foreboding walls of the canyon narrow down to only 40 feet across the Gunnison River at its most narrow point. 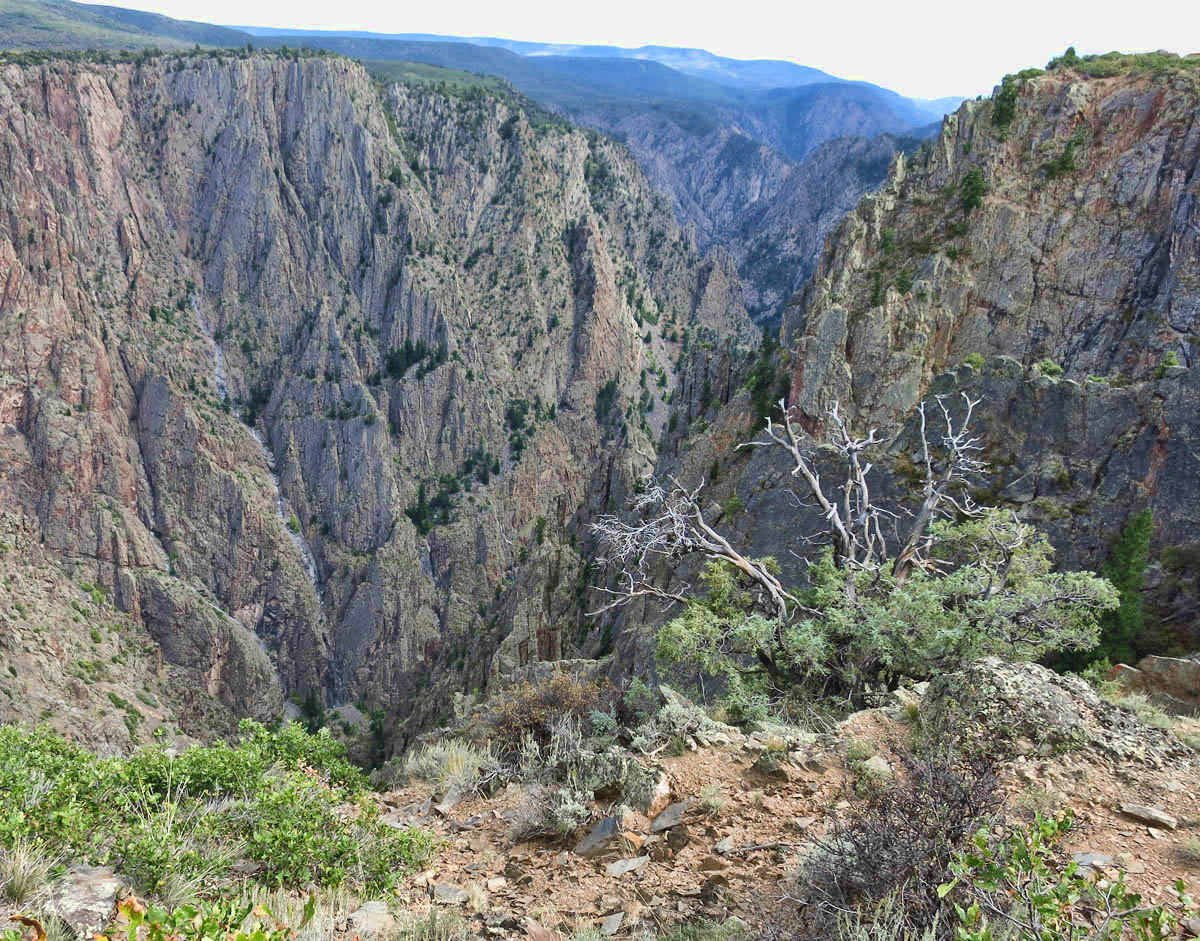 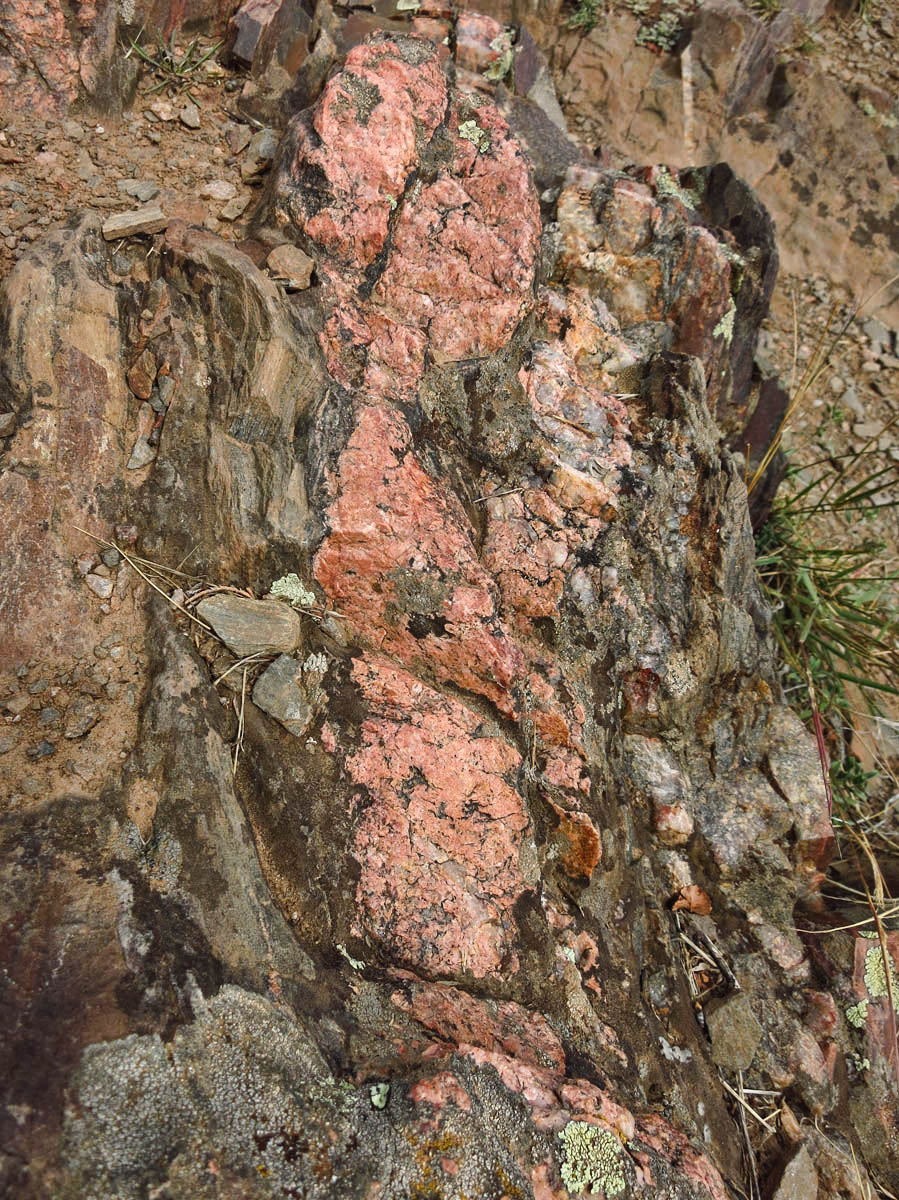 Beautiful pink pegmatite is interspersed all through the canyon walls. 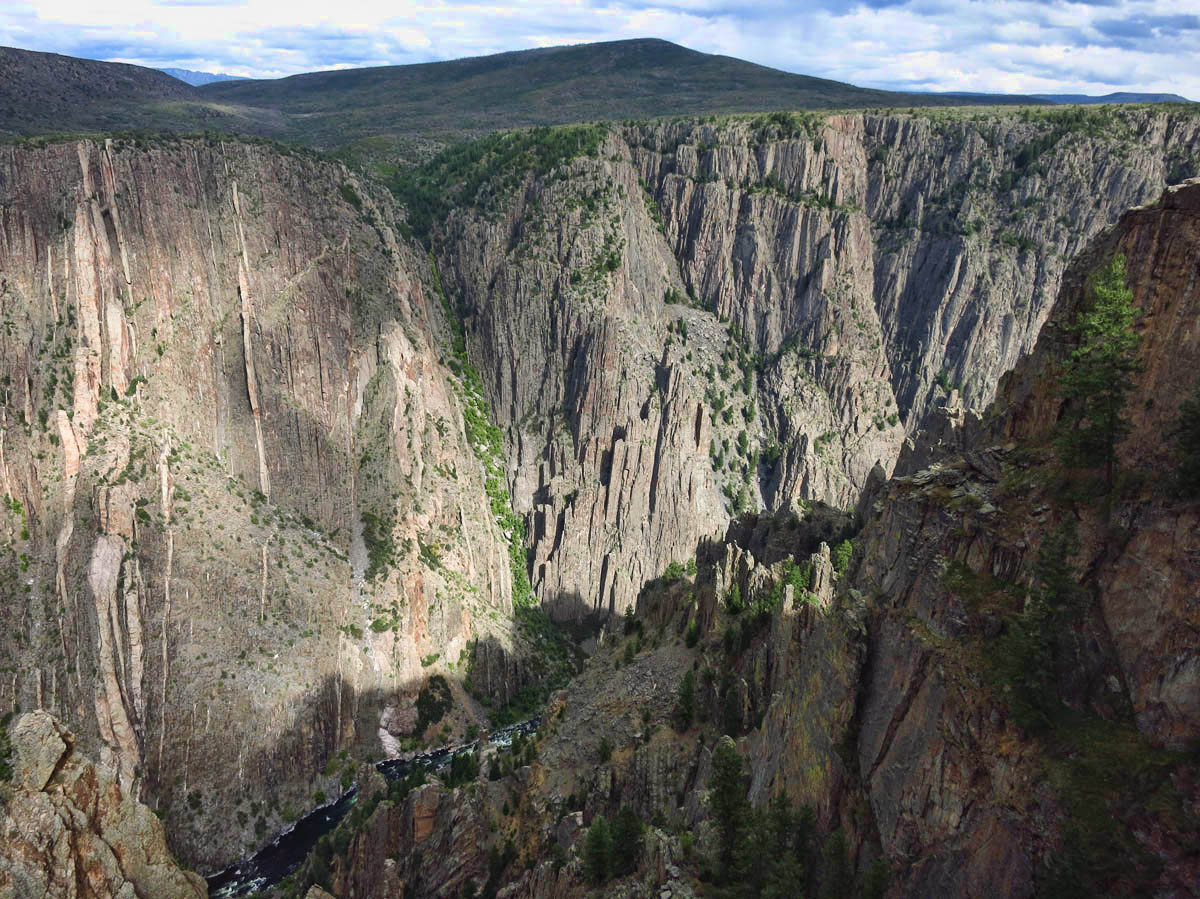 Note example of pink pegmatite “dikes” on far left. They erode slower than black rock, protruding from the surface.

Many look at the canyon and see black.  I look and see PINK!    Amidst the black rocks are beautiful rivets of pink pegmatite, large crystals of a pinkish mineral called potassium feldspar.   These “dikes” of pegmatite, are slower to erode than the black rocks, therefore giving off an embossed look to the canyon.  The best example of this is the Painted Wall. 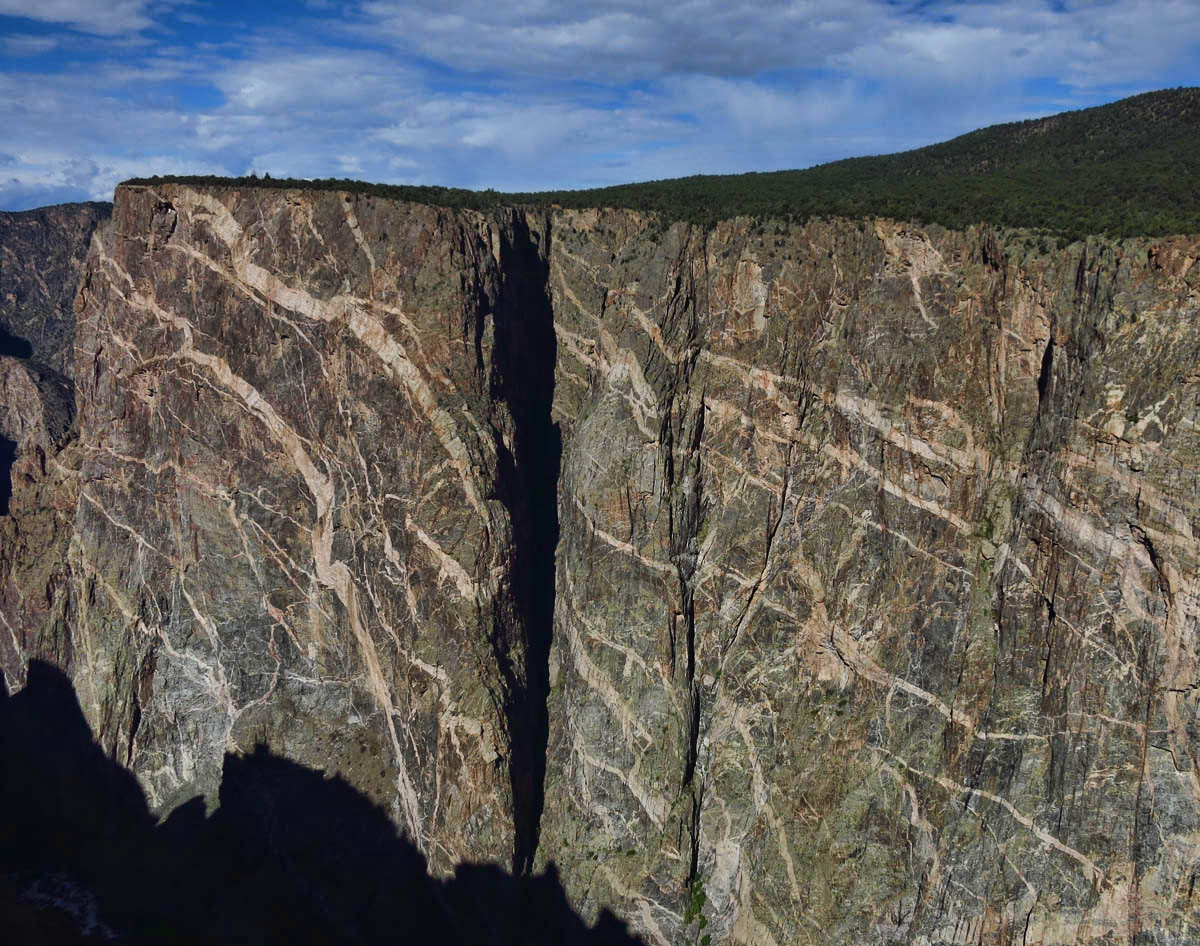 The Painted Wall, the park’s most iconic view, highest cliff in Colorado, 2,500 ft from river to rim. 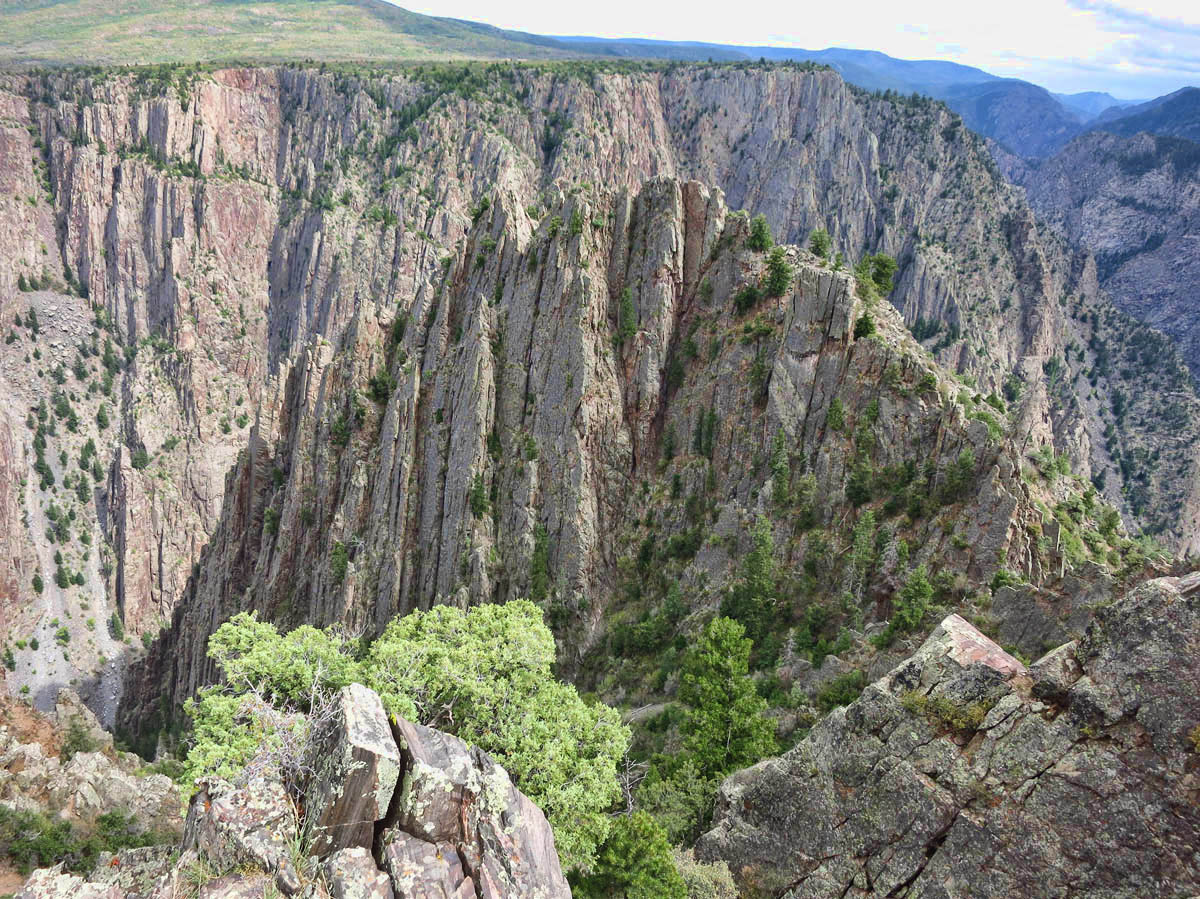 It’s possible to see a good part of the canyon from the South Rim Drive, but if you are an Edward Abbey fan, GET OUT OF YOUR CAR!  “We have agreed not to drive our automobiles into cathedrals, concert halls, art museums, legislative assemblies, private bedrooms and the other sanctums of our culture; we should treat our national parks with the same deference, for they, too, are holy places.”   There are many short hikes to overlooks along the rim.   Don’t be like the woman I saw parked at a pull-out, standing on the hood of her car with her arms stretched overhead, trying to take a photo into the canyon with her ipad.  (Oh, if only I were a faster photographer!) 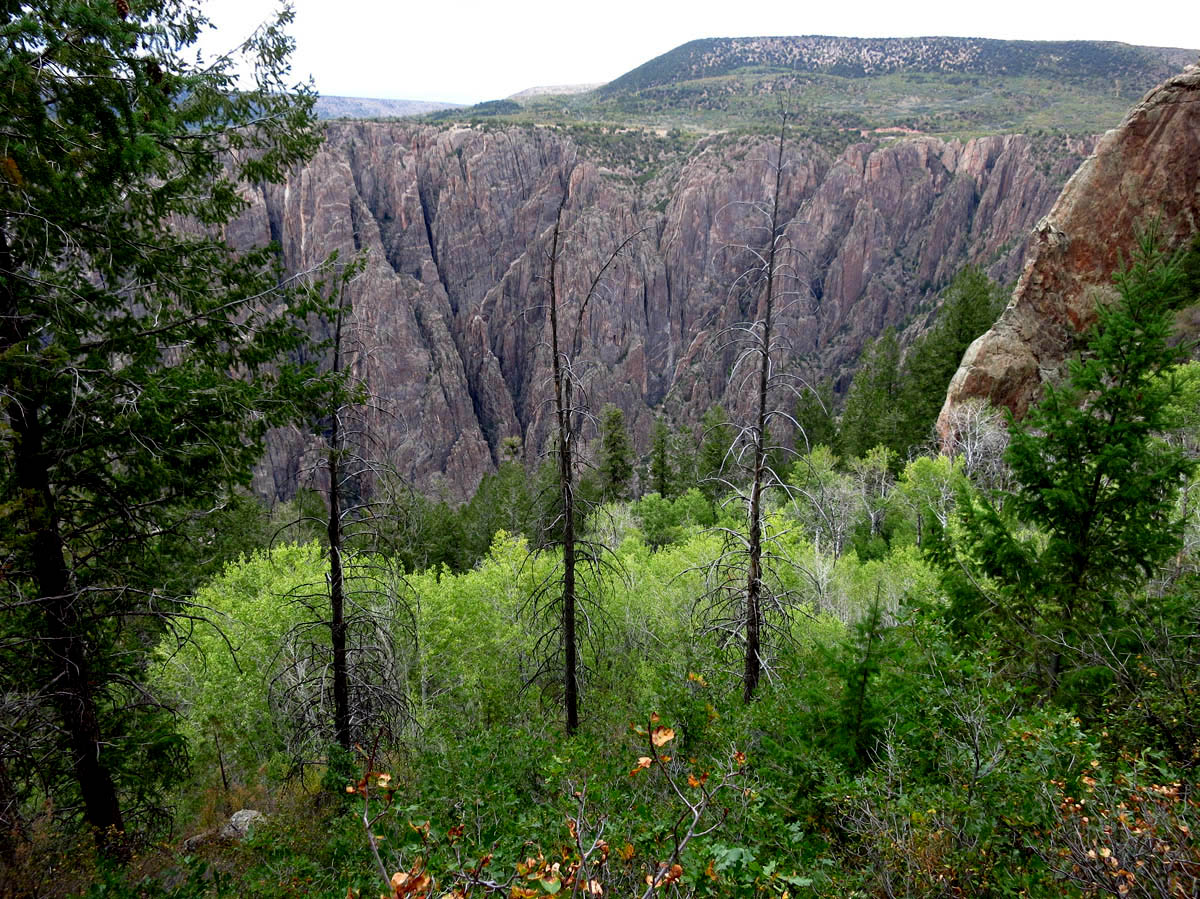 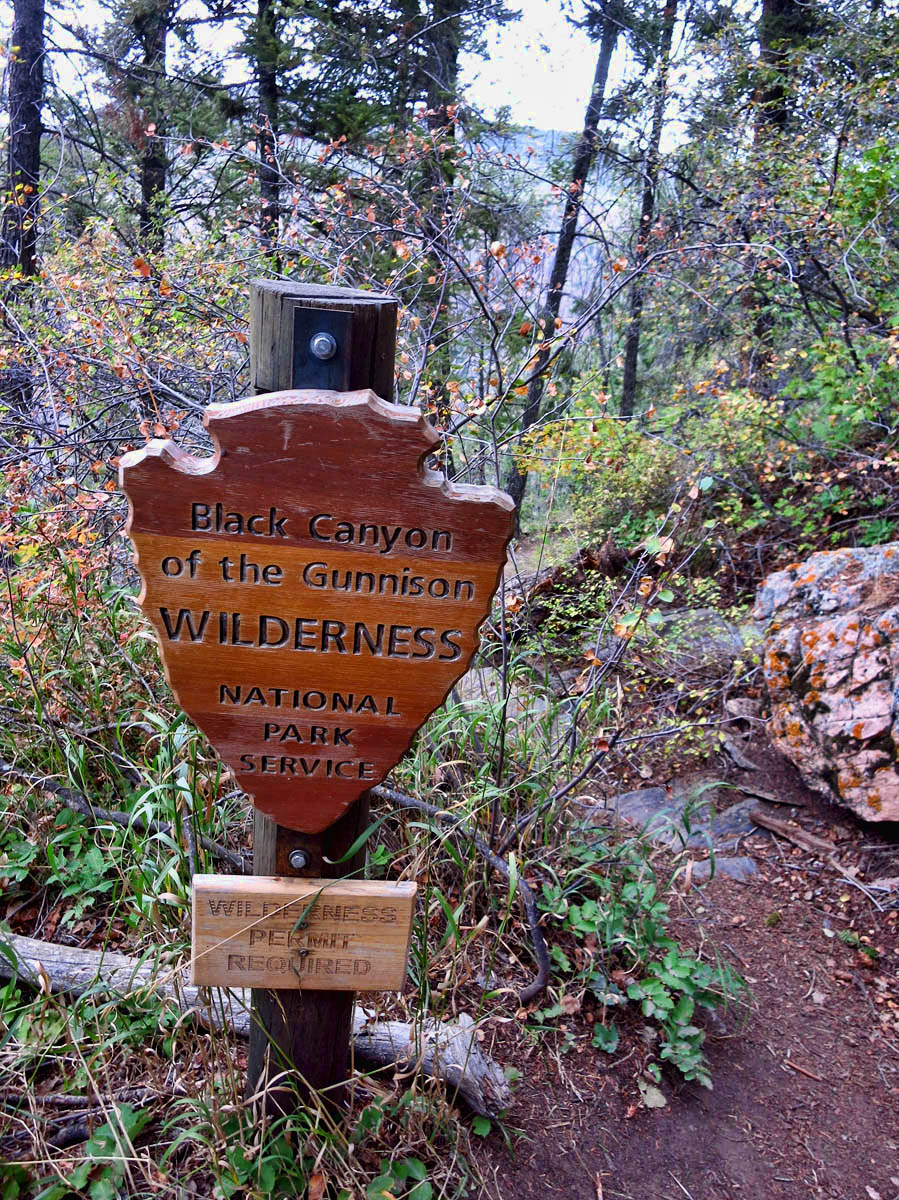 Wilderness permit is required for further decent into the Inner Canyon. 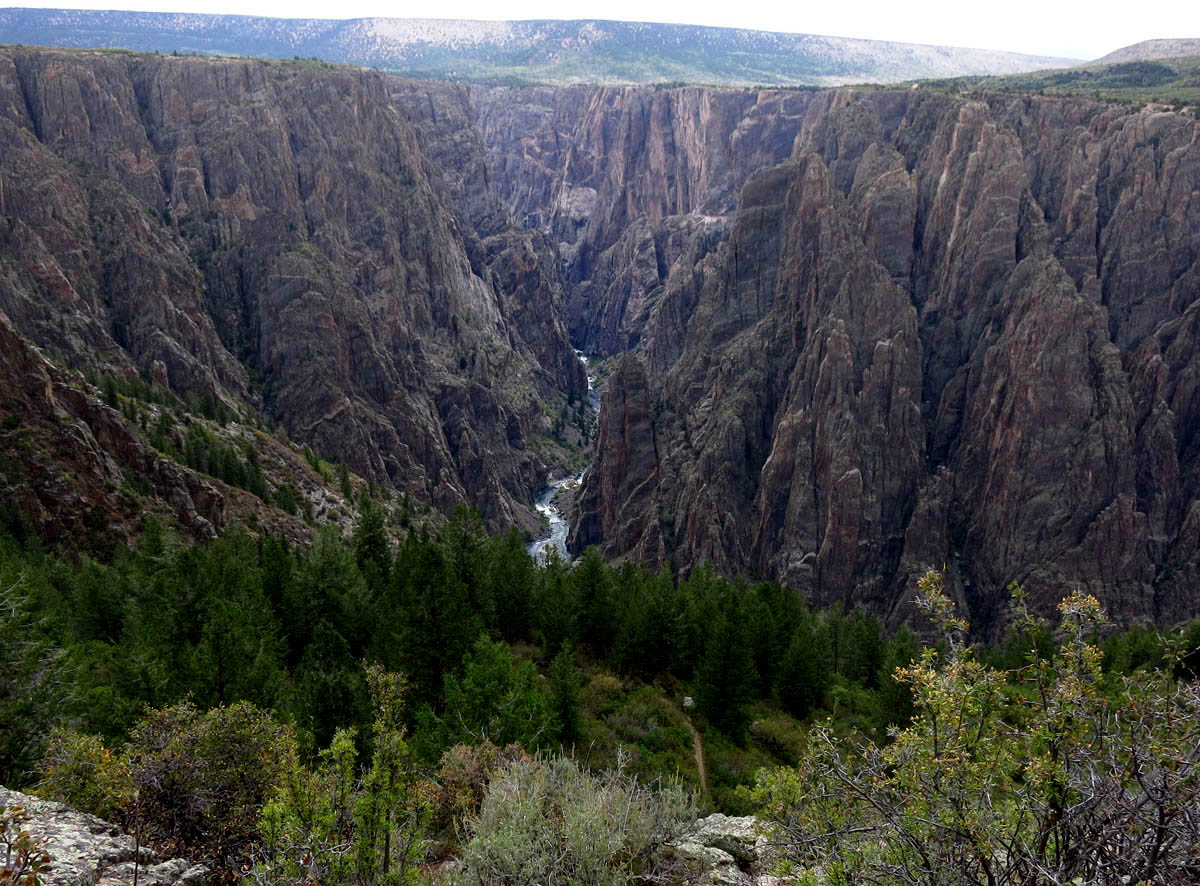 There are also three short hikes that offer a more intimate experience with the canyon.   The first of these is a one mile OW hike along the rim from the South Campground to the Vistor’s Center.  If you only take one hike, this should be it, as it follows the rim with great overlooks.  The second is the Oak Flat Loop Trail, two miles RT.  This was my least favorite of the three hikes, because the first half was primarily views of oaks!   If you don’t want to do the entire loop, just do the upper half for better views of the canyon.  The third hike out to the end of Warner Point offers the most dramatic views where the canyon is at its steepest at a depth of 2,722 ft. 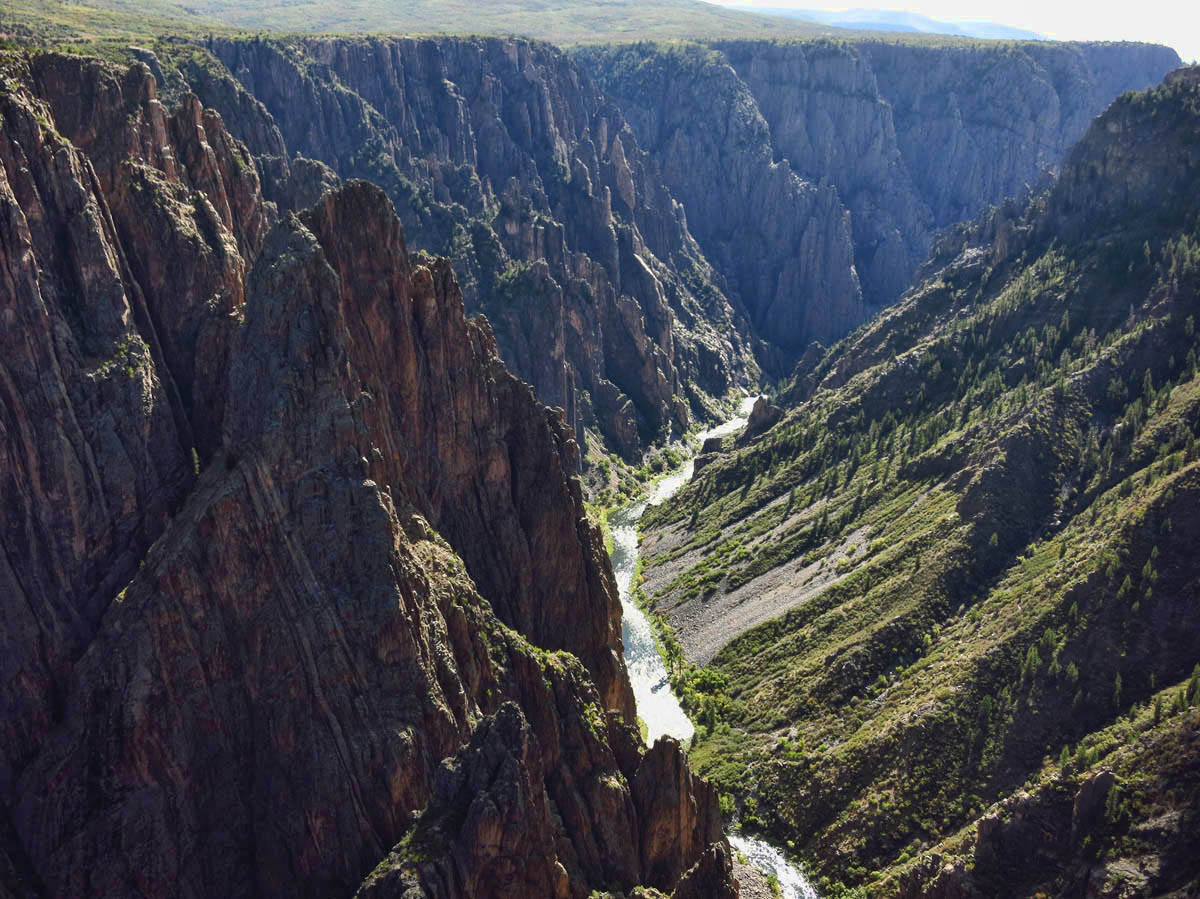 Silver ribbon that is the Gunnison River. 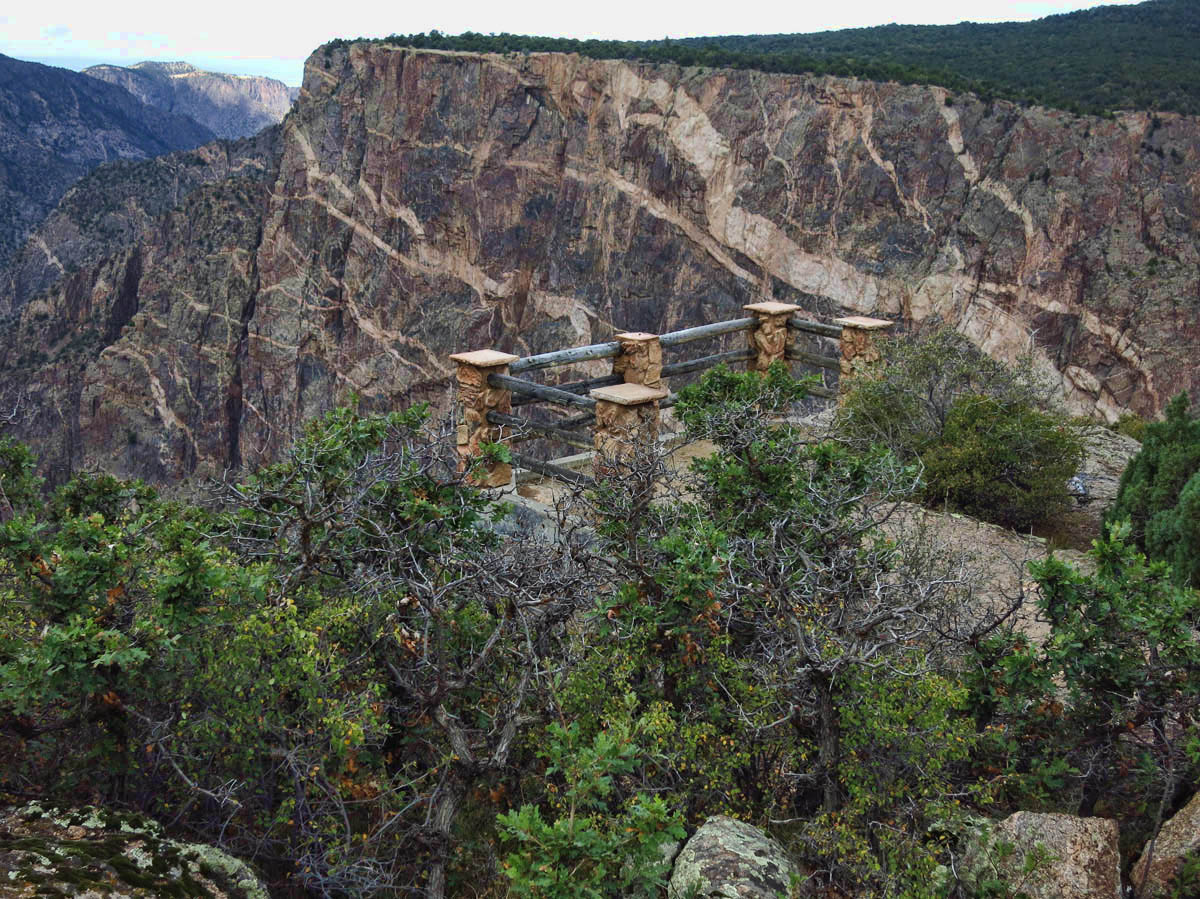 “Dragon Point.” Note pink pegmatite in shape of a dragon on the wall. (I think it looks more like a skinny horse.)

Of these three trails, the last two offer access into the “inner canyon,” which requires a free Wilderness permit.  I would have loved to do this 1,800 decent to the river, as the wild and roaring river was beckoning.  But there are no “trails” per se.  One must follow the draw, or drainage ditch down the rough, rocky decent.  The NPS warns, “Routes are difficult to follow, and only individuals in excellent physical condition should attempt these hikes … Hikers are expected to find their own way and to be prepared for self-rescue.”   I talk to the Park Ranger about the three possible access routes.  She says it is deceptively easy to find the way down, but be careful because many people take a wrong turn on the ascent and get “cliffed out.”   She also warns that it is extremely slippery, as it has been raining since I arrived. 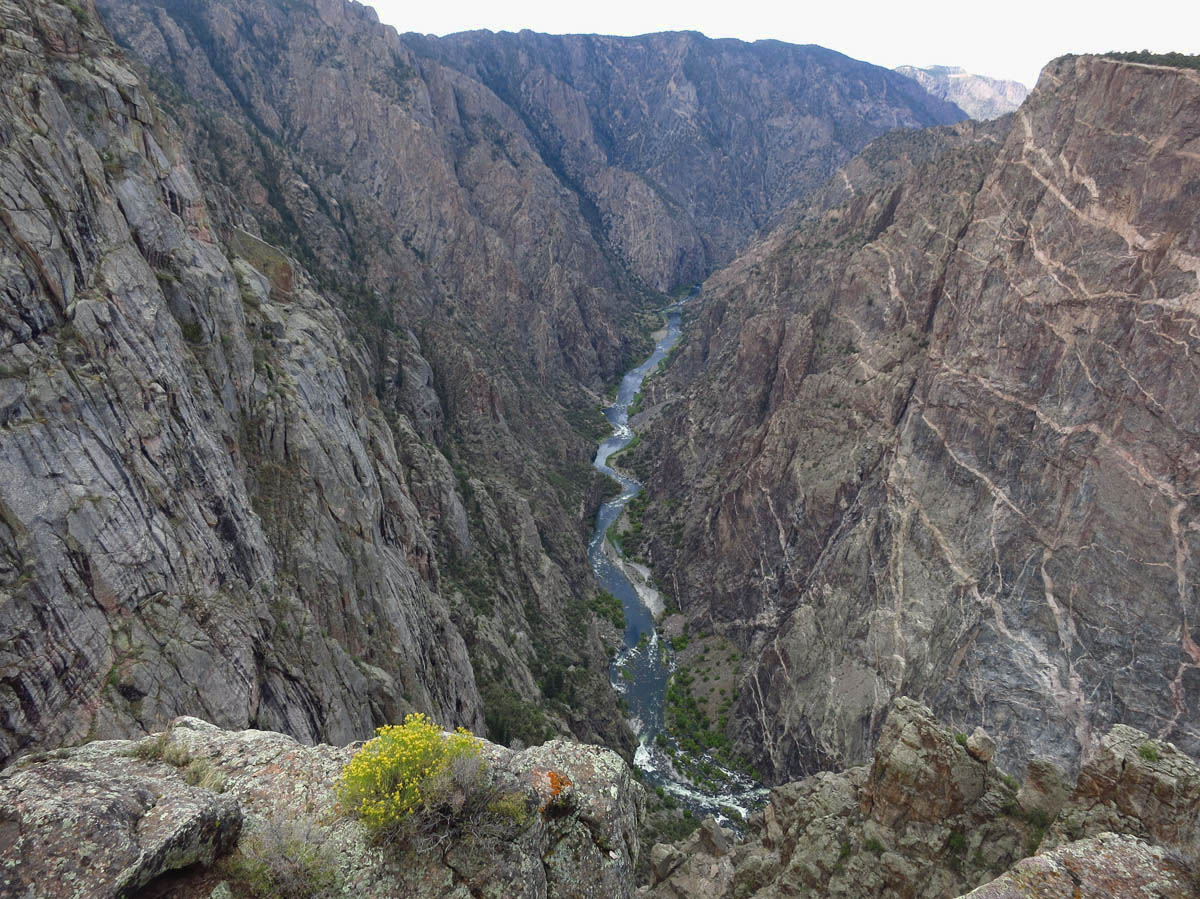 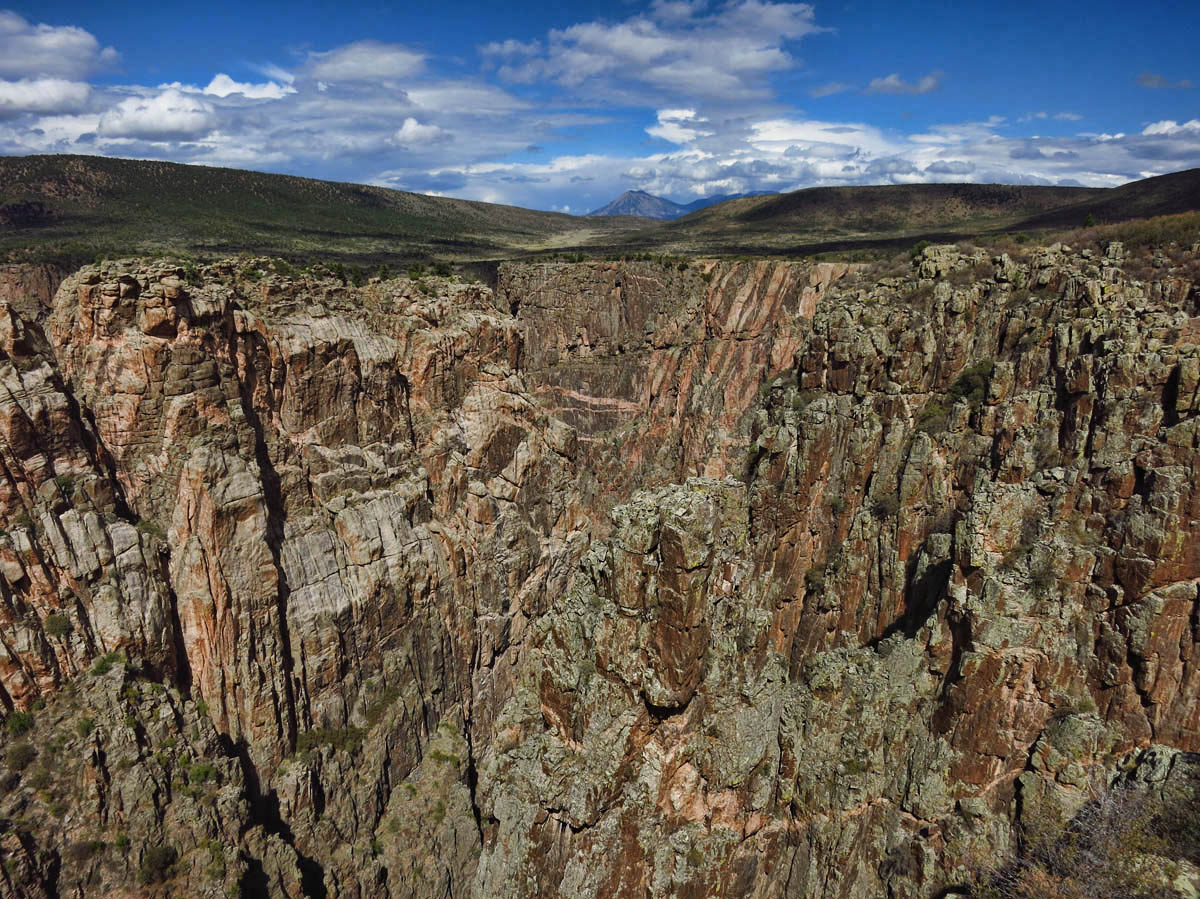 Finally, the sun comes out, which really makes the pink pop!

As I stand at the Chasm Overlook, staring longingly down at the river, a gentleman comes up and asks, “Have you been down to the river yet?”   I answer, “No, not yet, but I am thinking about it!”  He then proceeds to tell me how it is not that hard.  He lives in nearby Montrose, and has made the trip down safely many times, and it is well worth the effort.  We are discussing the pros and cons, when he says “Just gear down, and stay off the brake.”    It is then that I realize we are having two different conversations.  He is talking about driving down via East Portal Road, and I am talking about hiking down the Draw.  I say “Oh!  I though you meant you had hiked it.”   He replies, “I may be dumb, but I’m not stupid!” and walks off…  Okay, I guess that settles it!

22 thoughts on “Curecanti and the Black Canyon; The Rim, The River, and The Ride”