So, things have been moving slowly here in Santa Paula, California, Lemon Capital of the World.  But at least they are moving.   My new frame rail extensions have been ordered from the Winnebago factory in Forest City, Iowa. Once they arrive, the local Winnebago dealer in nearby Ventura, Barber RV, will be doing the repairs.   Many said “just have it welded,” but the problem has been finding someone to fix it.  The welding shops don’t want to deal with the holding tanks (bolted to the busted frame extensions) and the RV Repair places don’t have the capability to weld.   So finally, I have a solution. Now, I just need the patience to go with it. Patience…not exactly my forte.

A funny thing happened to me right after I retired.  I seem to want to keep moving.  Some have suggested that perhaps I have a problem in that I can’t stay in one place for long.  Some call it “vacation mode.”  Others call it “running from something.”   I am sure it would be the psychotherapists dream.  But fact is, movement….any kind of movement….whether it be hiking, biking, driving, riding, is soothing to me. 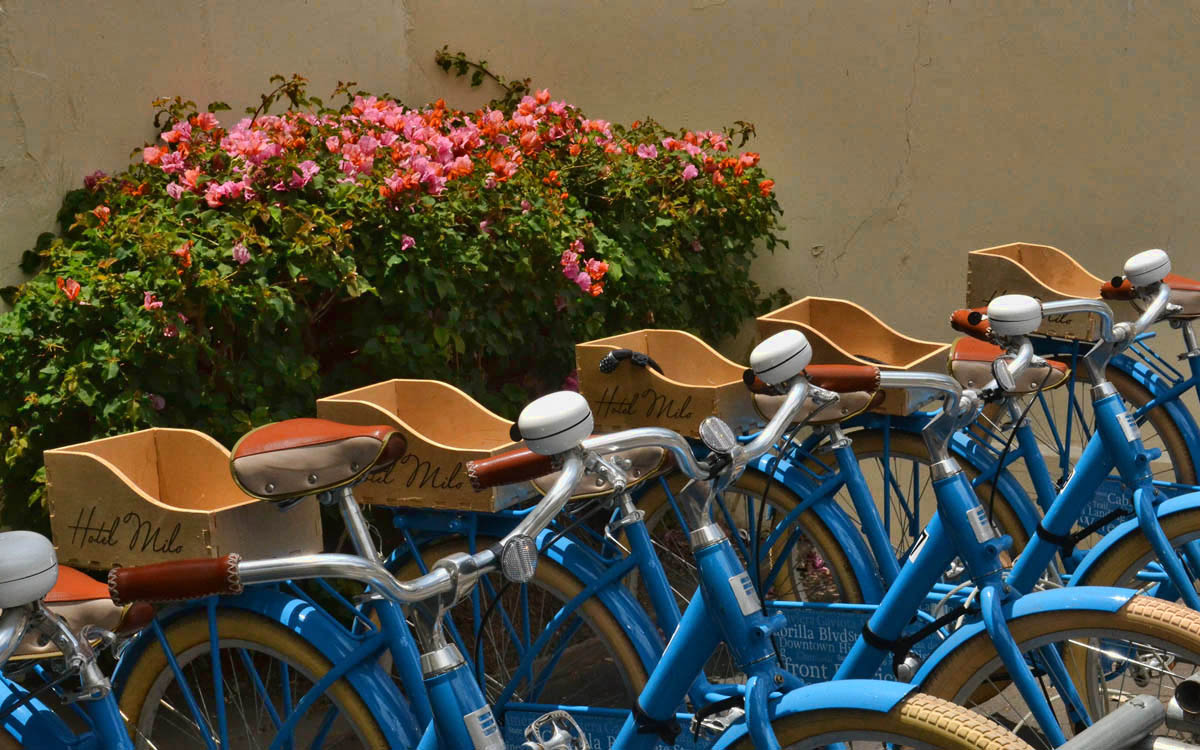 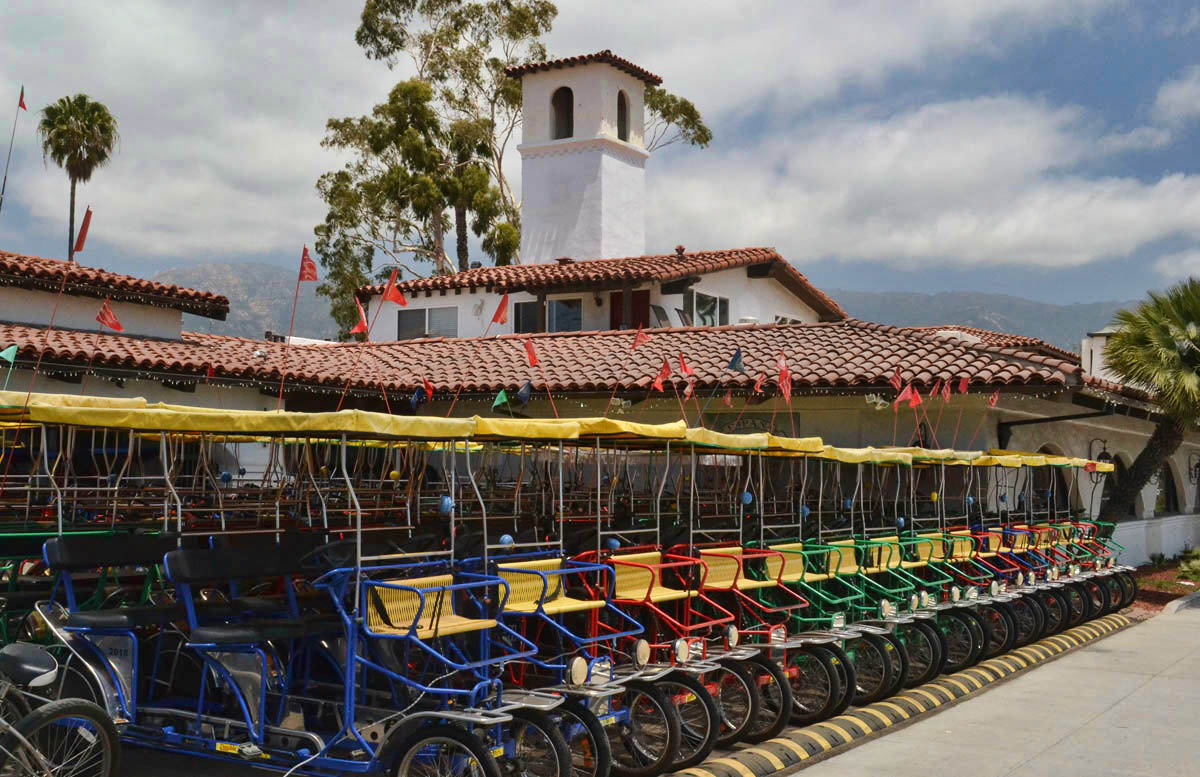 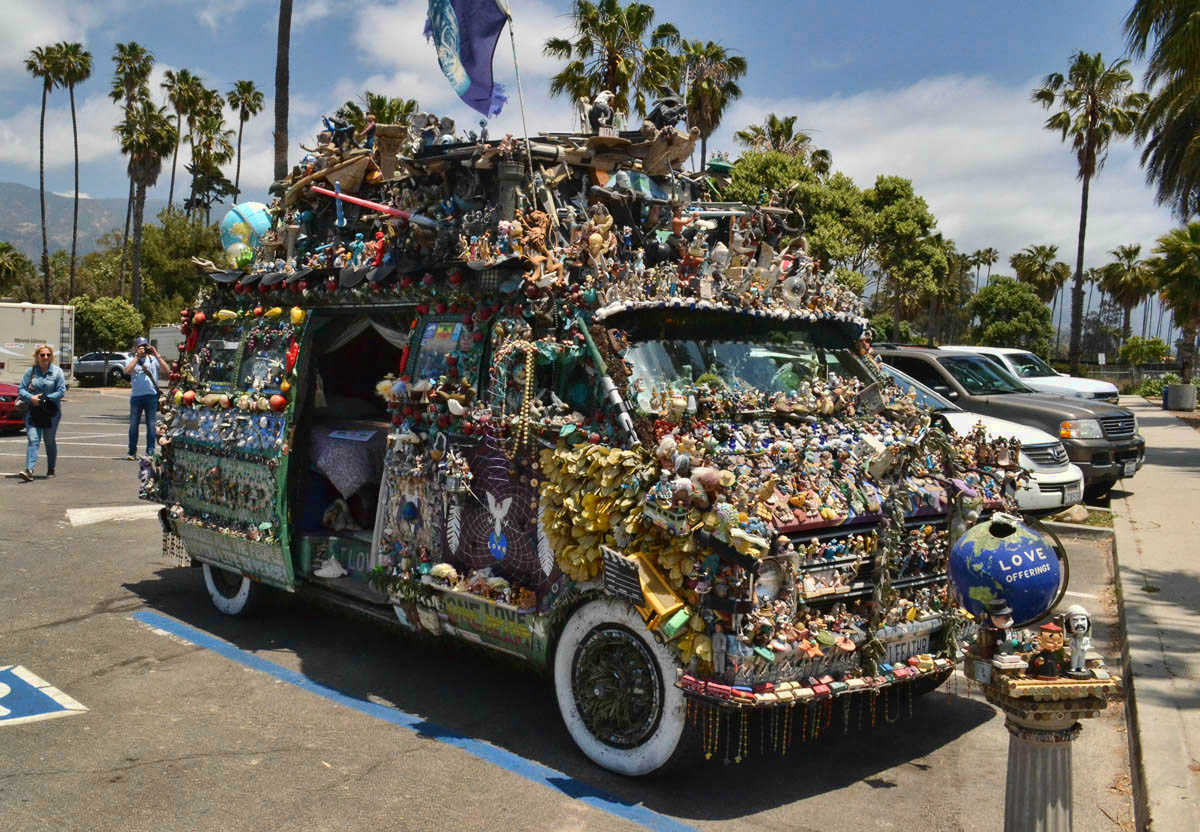 “The Temple of One Love” claims to be “World’s most famous hippie van.”

I recently heard Anderson Cooper describe this by analogy of a shark that must keep moving to keep oxygen-rich water flowing over its gills, otherwise it will die from lack of oxygen.   This resonates with me…the movement part (and some may say the “shark” part as well.)  😉

I’ve been cooped up inside the Winnie for over a week now, waiting hopefully for some word or direction on my repairs.  It is starting to feel like a cross between a worry chamber and a war room.  Now with a plan firmly in place, I NEED TO GET OUTTA HERE!! 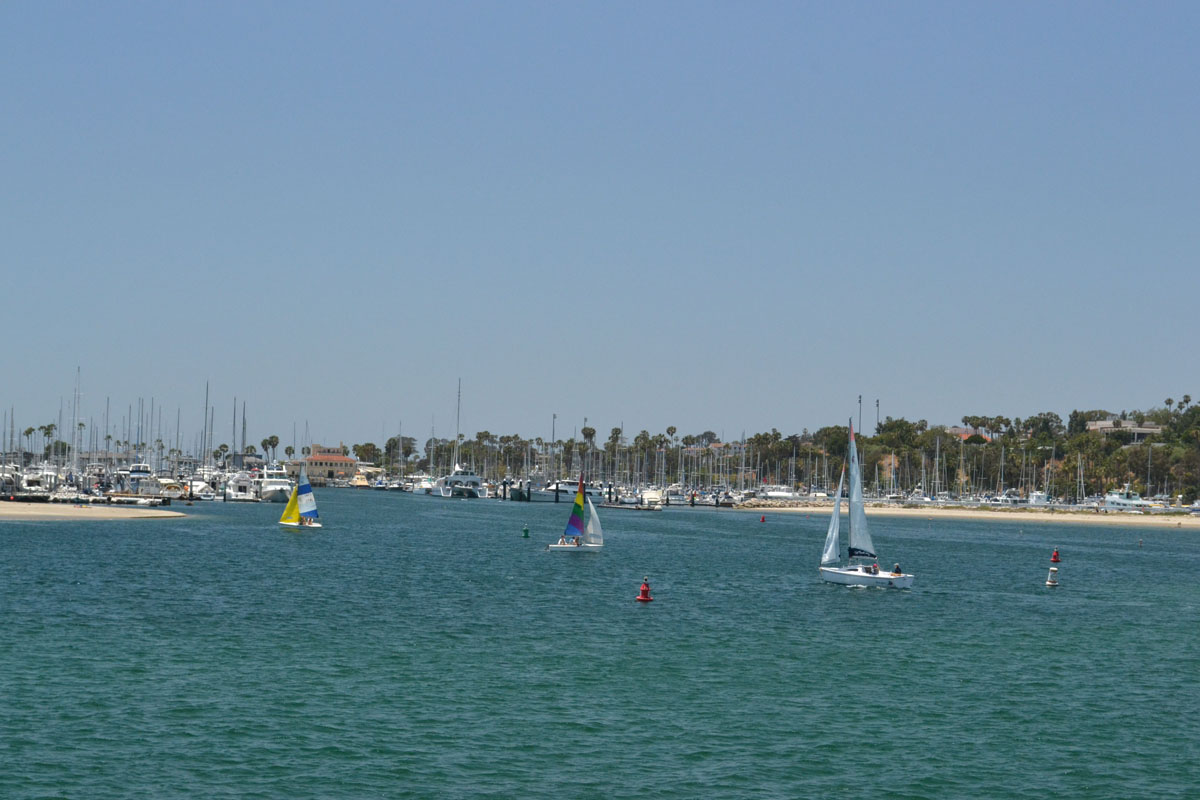 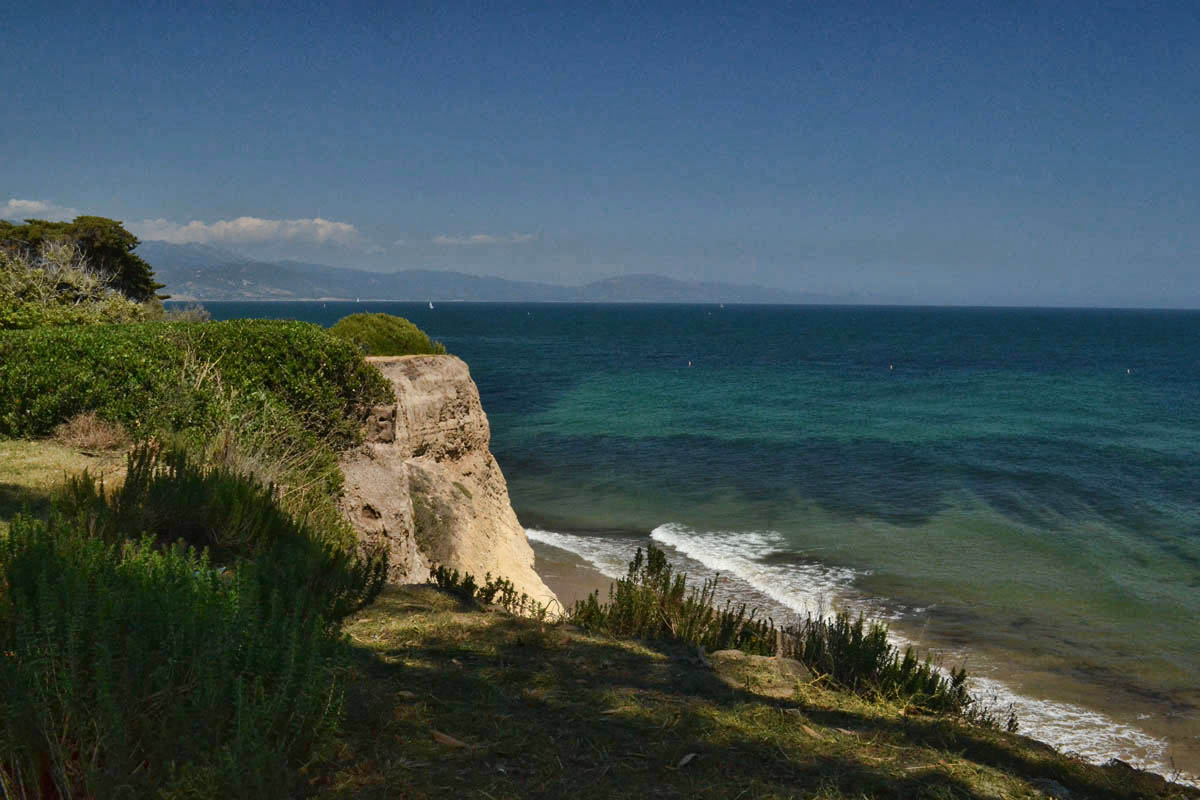 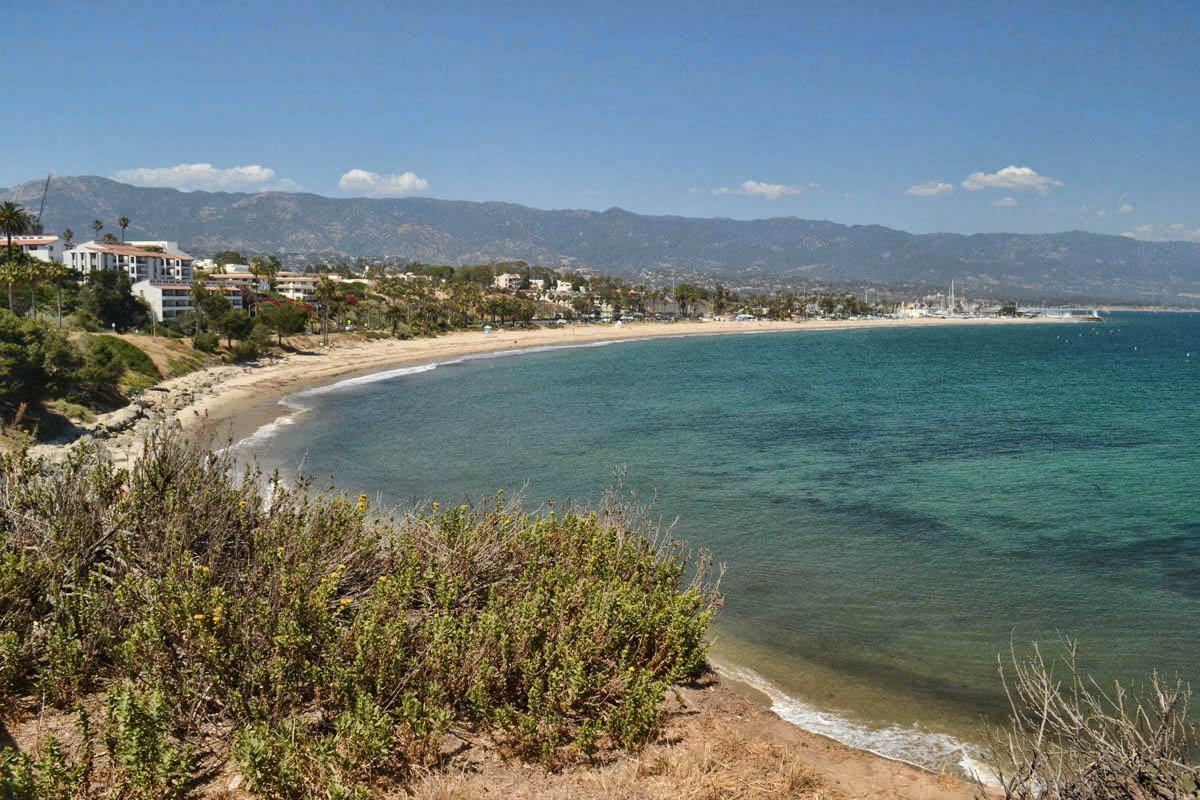 A road trip, perhaps, up the Pacific Coast Highway, the notorious “Highway 1.” Too far for the little 1994 Tracker.   Too risky for the Winnie with her holding tanks held up by zip ties waiting on the new parts.  I’ll rent a car!

I realize it’s been a long time since I rented a car when the Enterprise attendant asks, “You’re familiar with keyless ignition, right?”   uuuuhhhhh….no.  Thinking back, I am not sure I have driven a car newer than my old 2000 Honda CRV since I started full timing.    Stepping on the gas pedal, I realize how “pedestrian” I have become from driving a 1994 Tracker and a 9,000 lb RV.   I hit the gas and almost get whiplash! 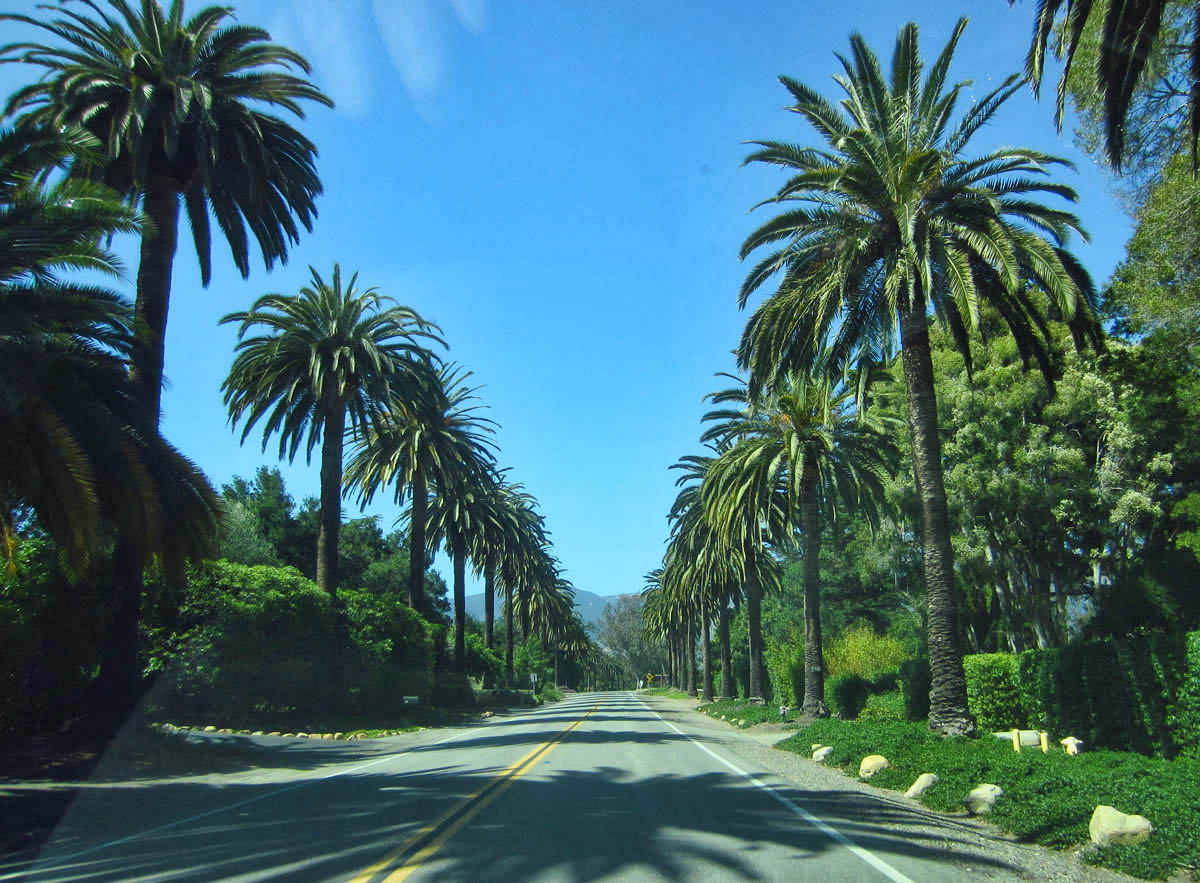 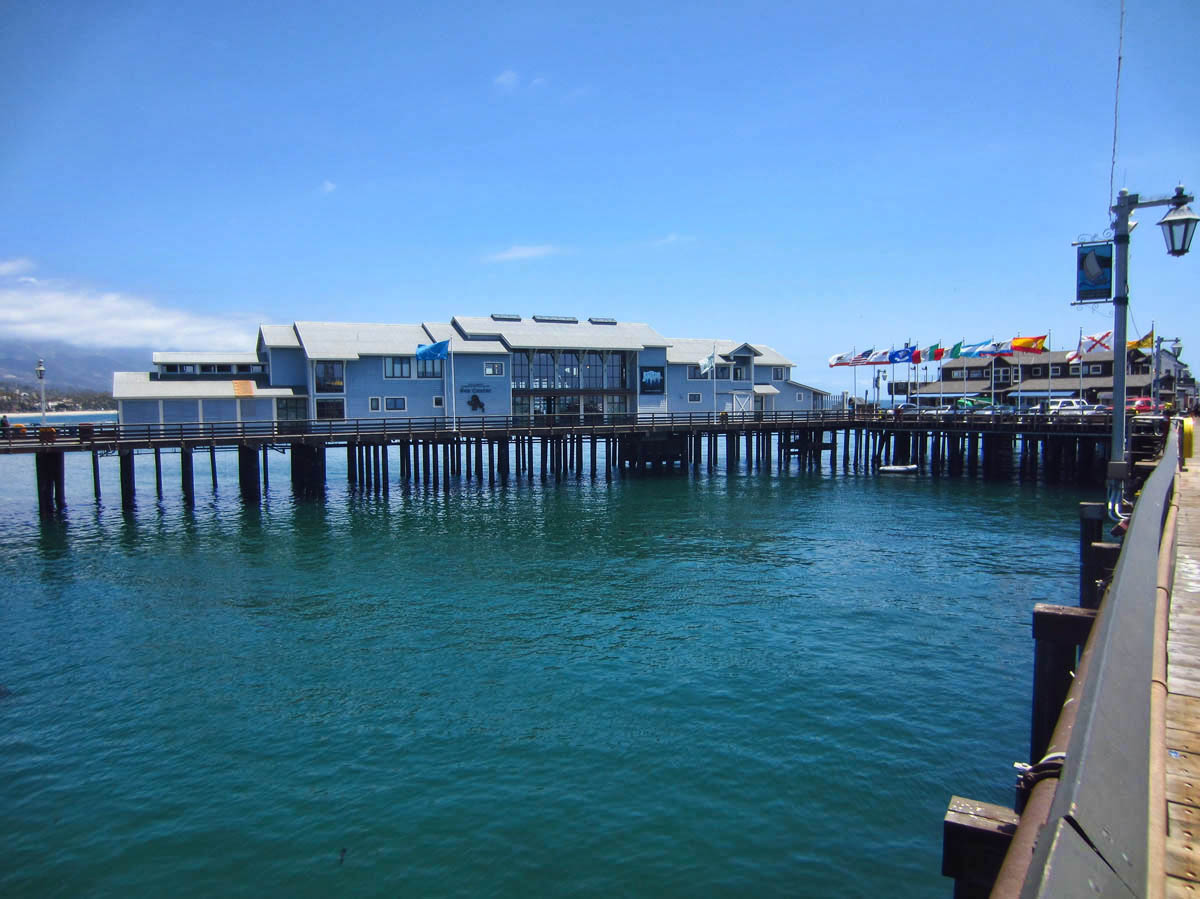 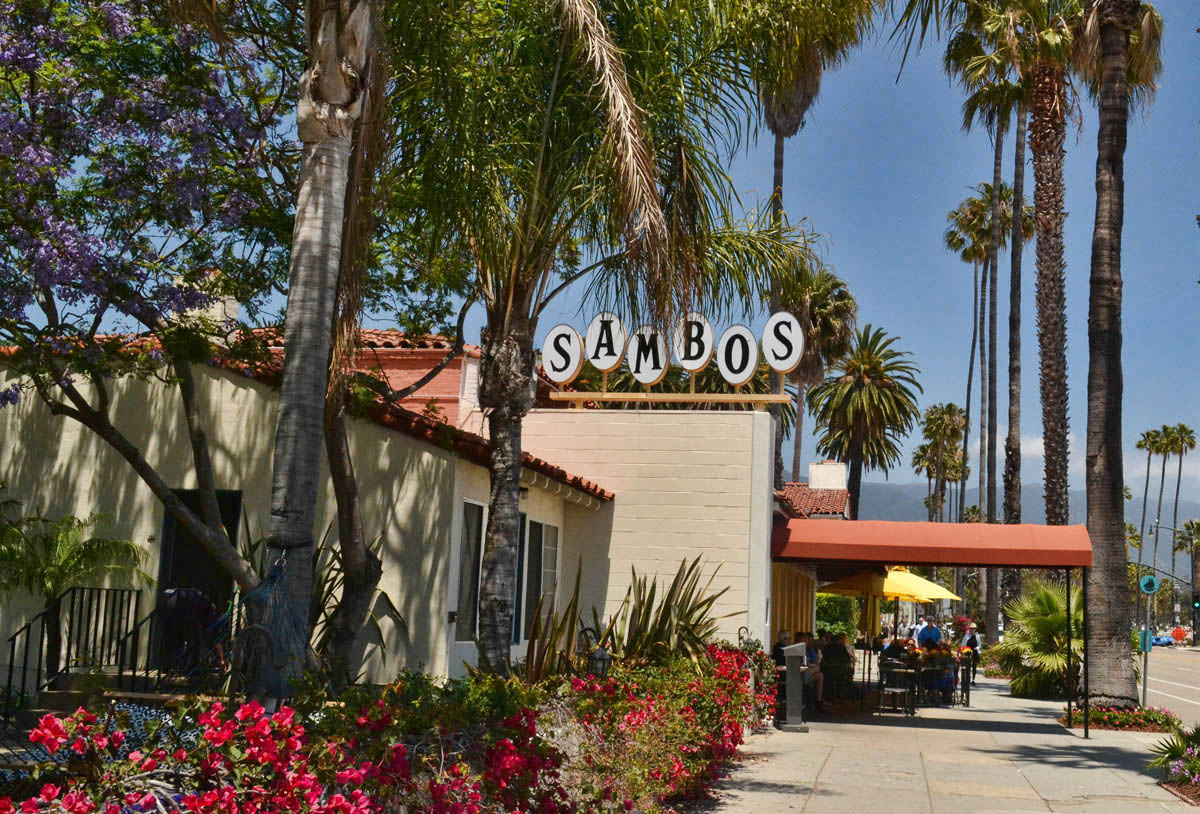 Santa Barbara is just up Highway 101 from Ventura about 30 miles, so I don’t make it very far before my first exploratory stop.  What a beautiful town!   In keeping with the “mission theme,” most buildings are designed in the Spanish Renaissance style of cream-colored stucco with red tile roofs.

One of the top tourist attractions in Santa Barbara is the Scenic Drive which runs along the shoreline, through the Hope Ranch, and includes a stop at the Old Mission Santa Barbara.  Founded in 1786 as a part of the Franciscan order, it is known as “The Queen of the Missions.” 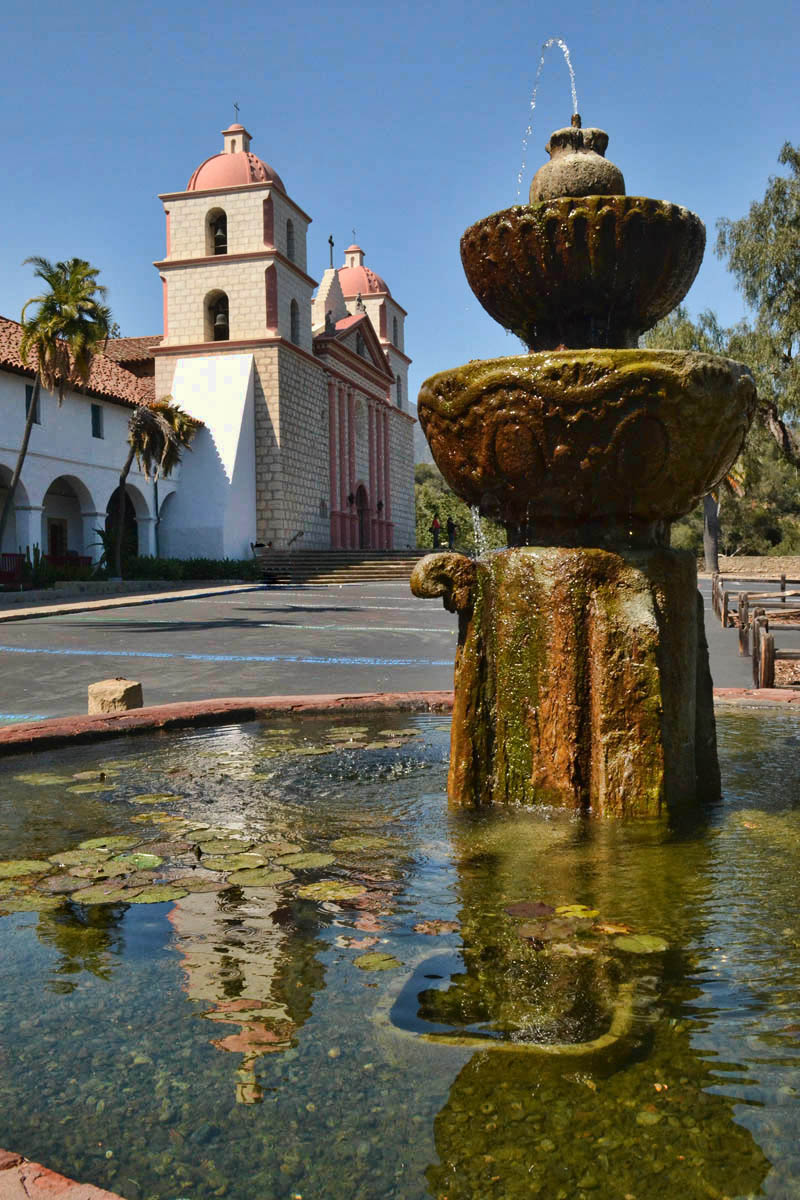 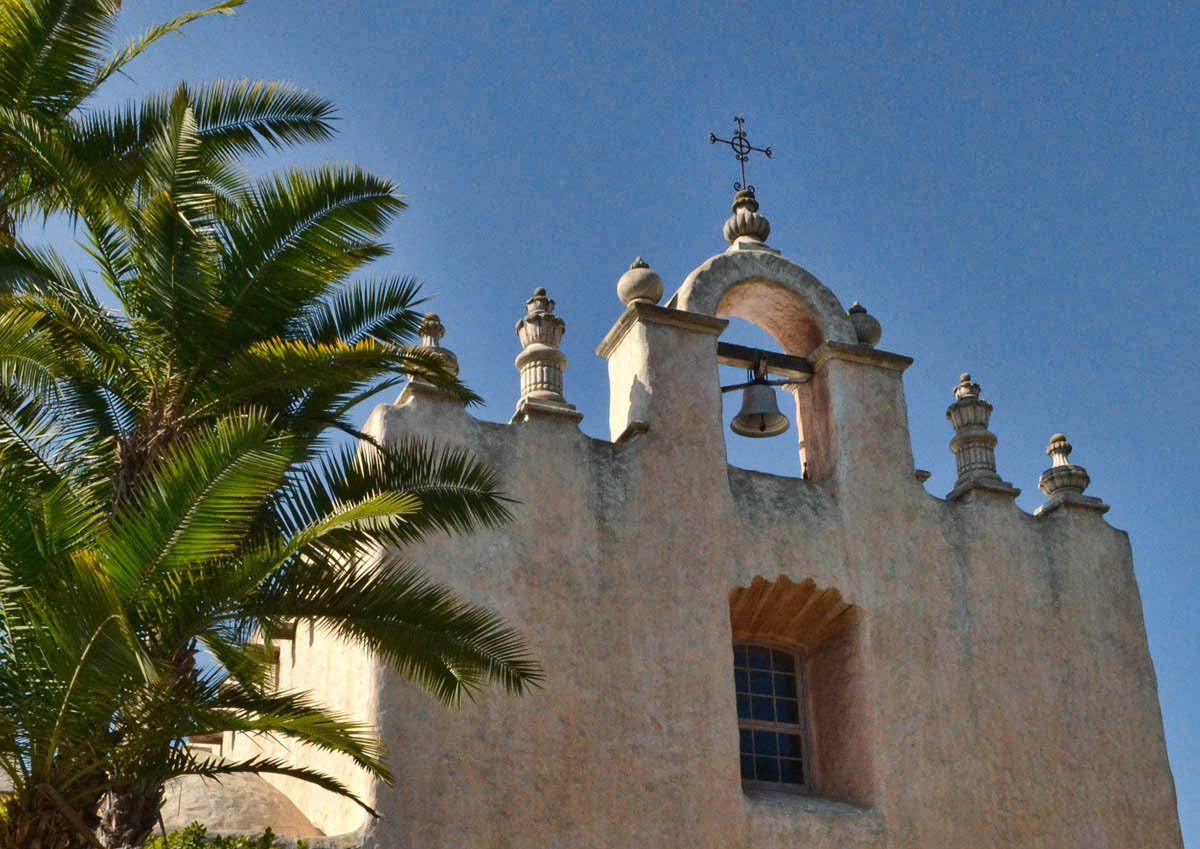 Our Lady of Mount Carmel Church is also along the Scenic Drive. 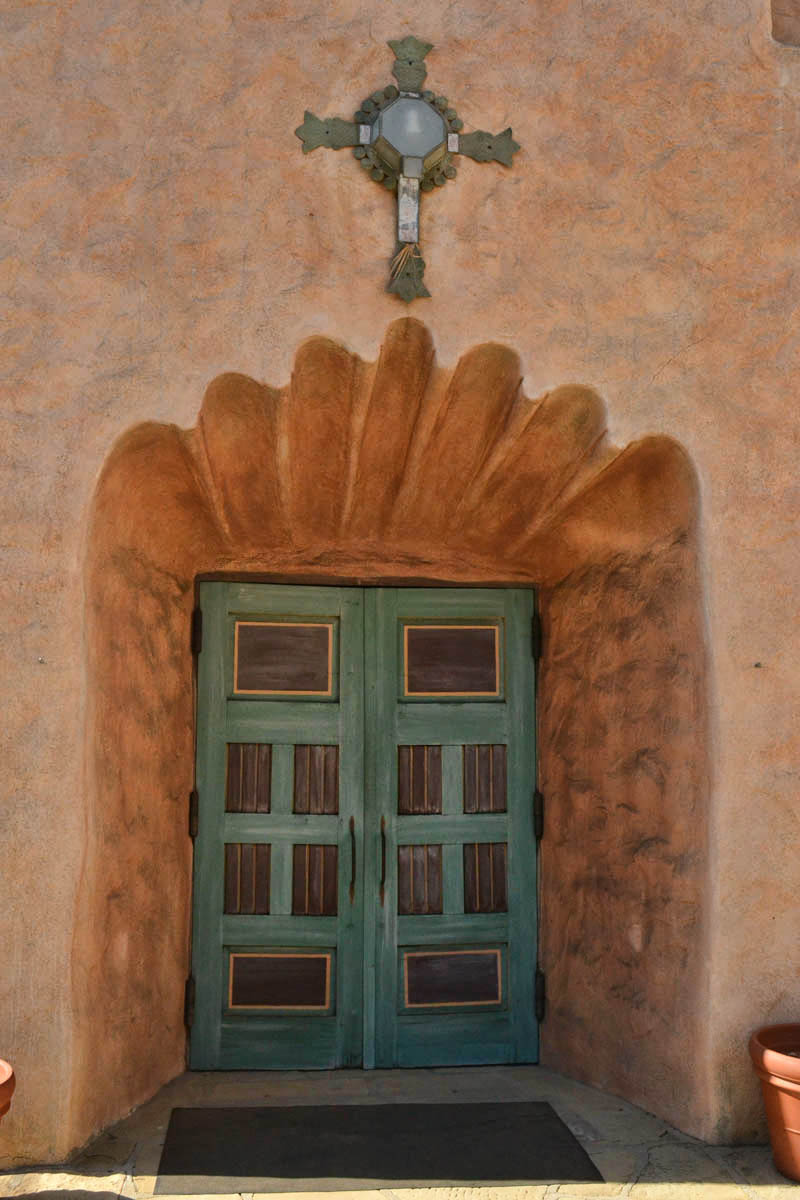 My destination for the night is just another 45 miles up the road.  I get my best tips from Wheeling Nina and Paul, so I am happy to once again be “shadowing” them, if only for a little while.  I remembered her post about the Firestone Walker Brewery, more specifically, their “Barrelworks” facility in Buellton. 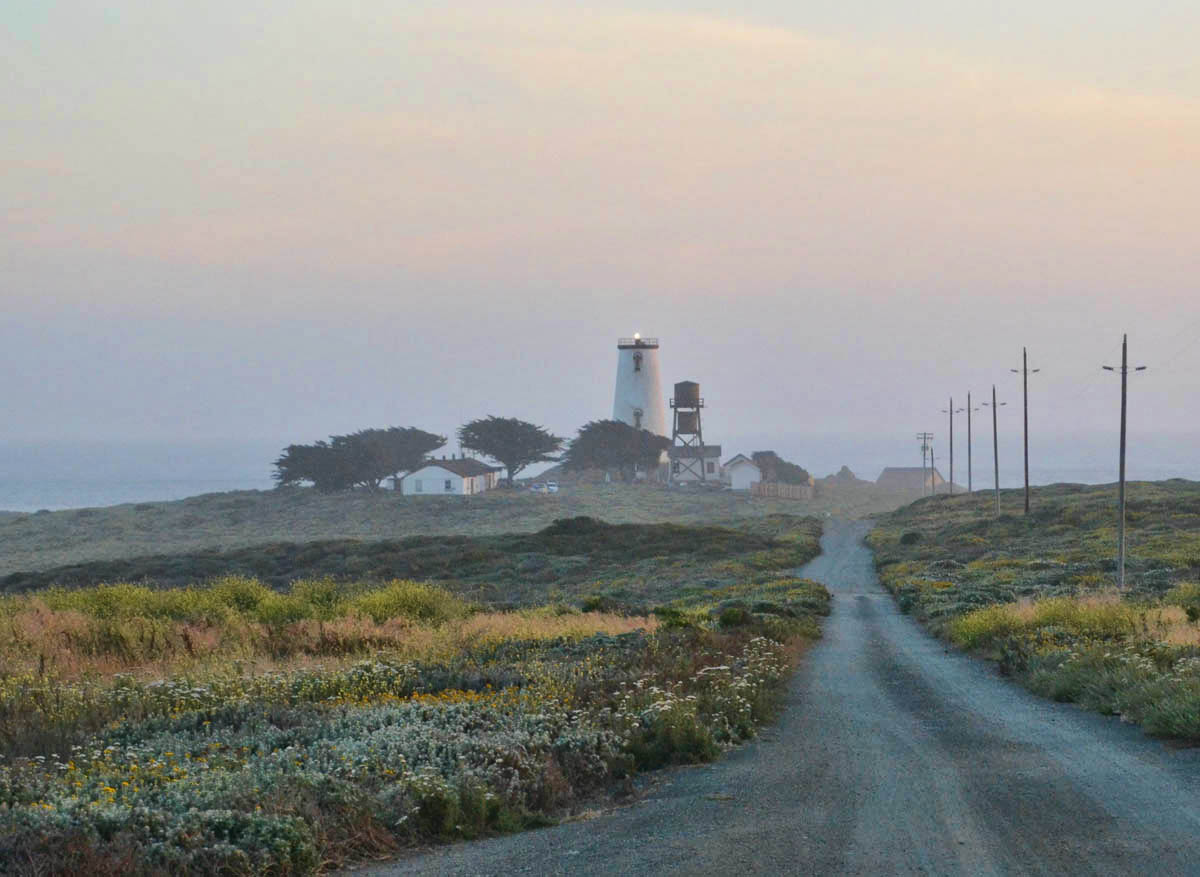 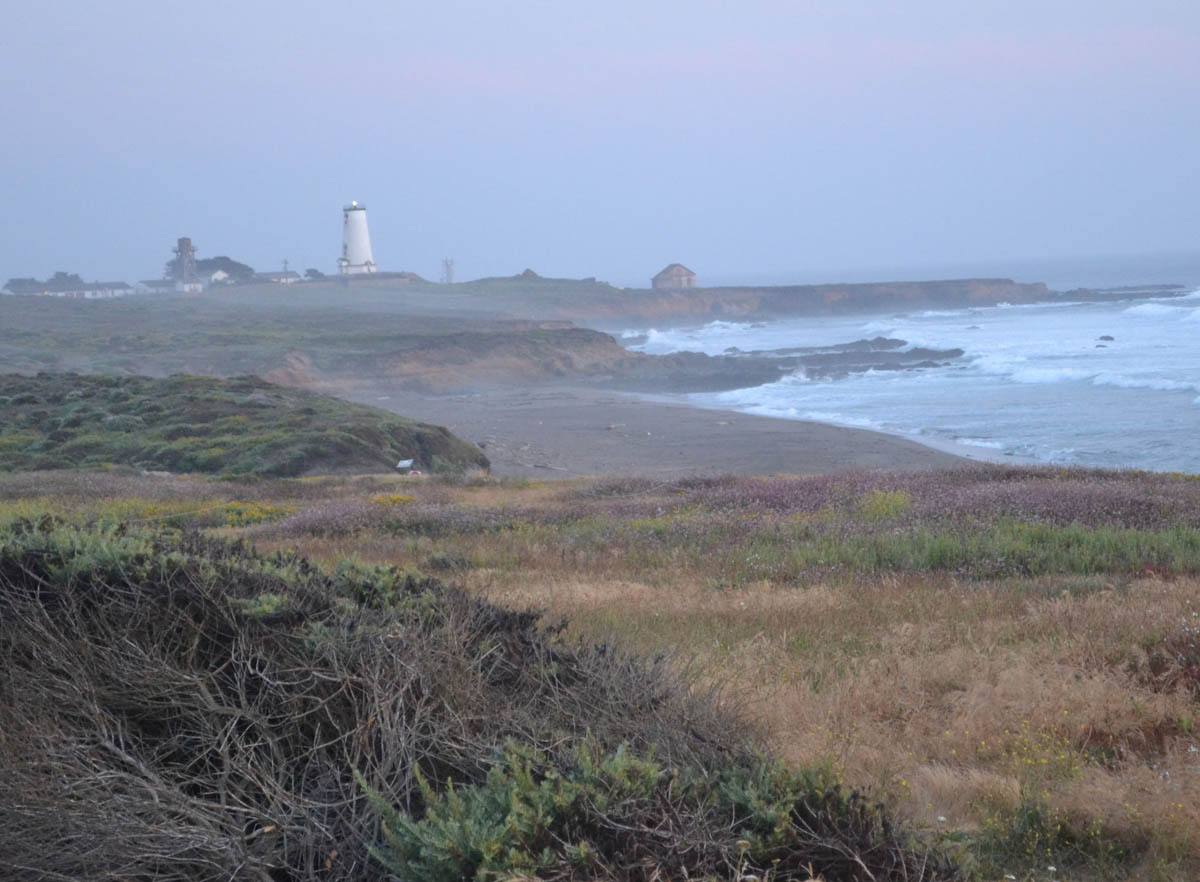 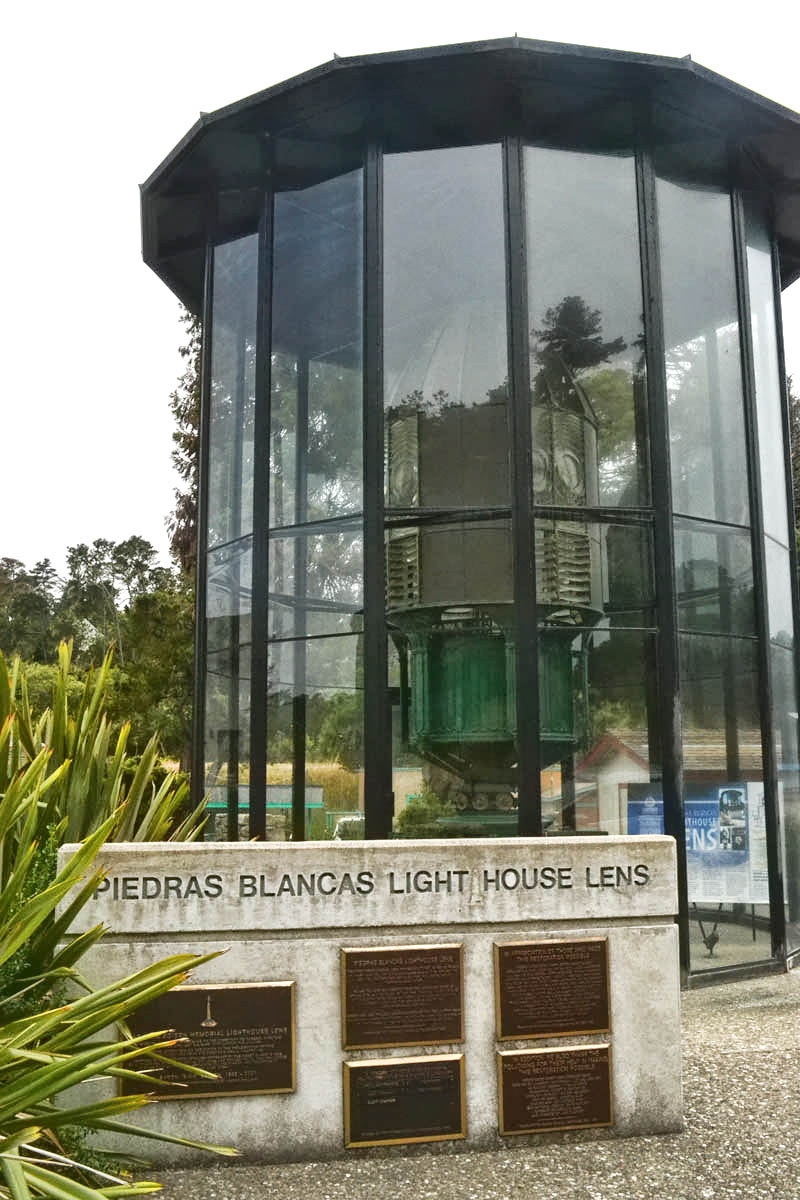 The original First Order Fresnel Lens is on loan to the nearby Cambria Lion’s Club. It served as a beacon to guide navigators from 1874 to 1949. 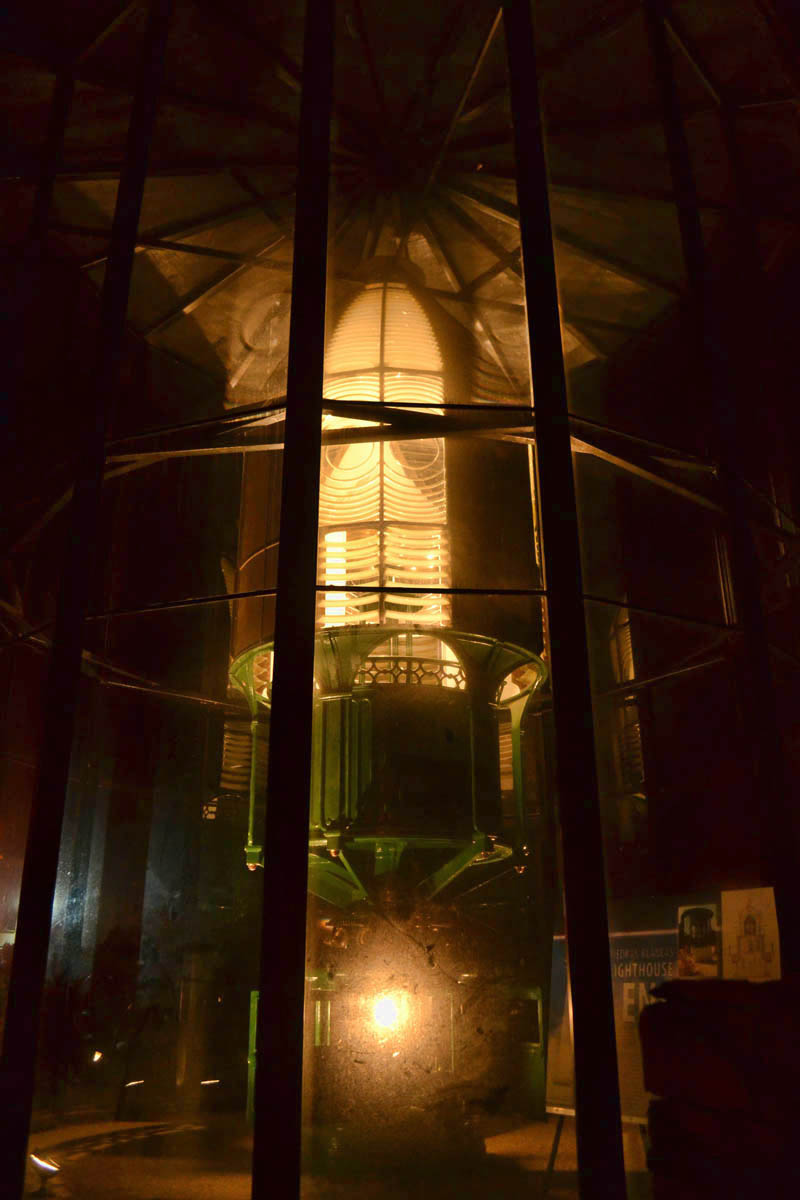 I tasted several of the Barrelworks barrel-aged, limited edition small batch brews.   It was a tough call, but my favorite ended up being “Parabola — a beer of darkness and immensity, a barrel-­aged beast that is routinely ranked as one of the top beers in the world.  This Russian imperial oatmeal stout is aged for a full year in a blend of bourbon barrels from Elijah Craig, Four Roses, Pappy Van Winkle, Woodford Reserve and Buﬀalo Trace, developing ﬂavors of rich, chewy roasted malts, charred oak and bourbony vanilla. Parabola bares its teeth with its impenetrable black hue and soaring alcohol, yet its bite remains reﬁned with a silky, balanced finish. “ 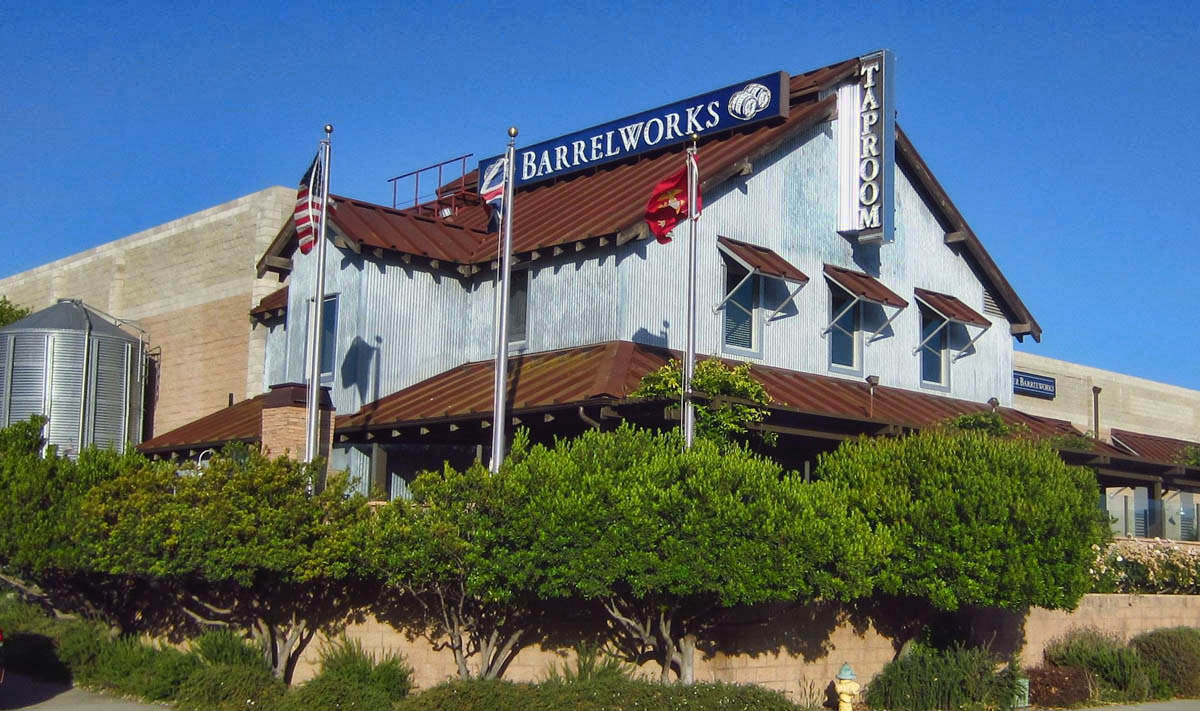 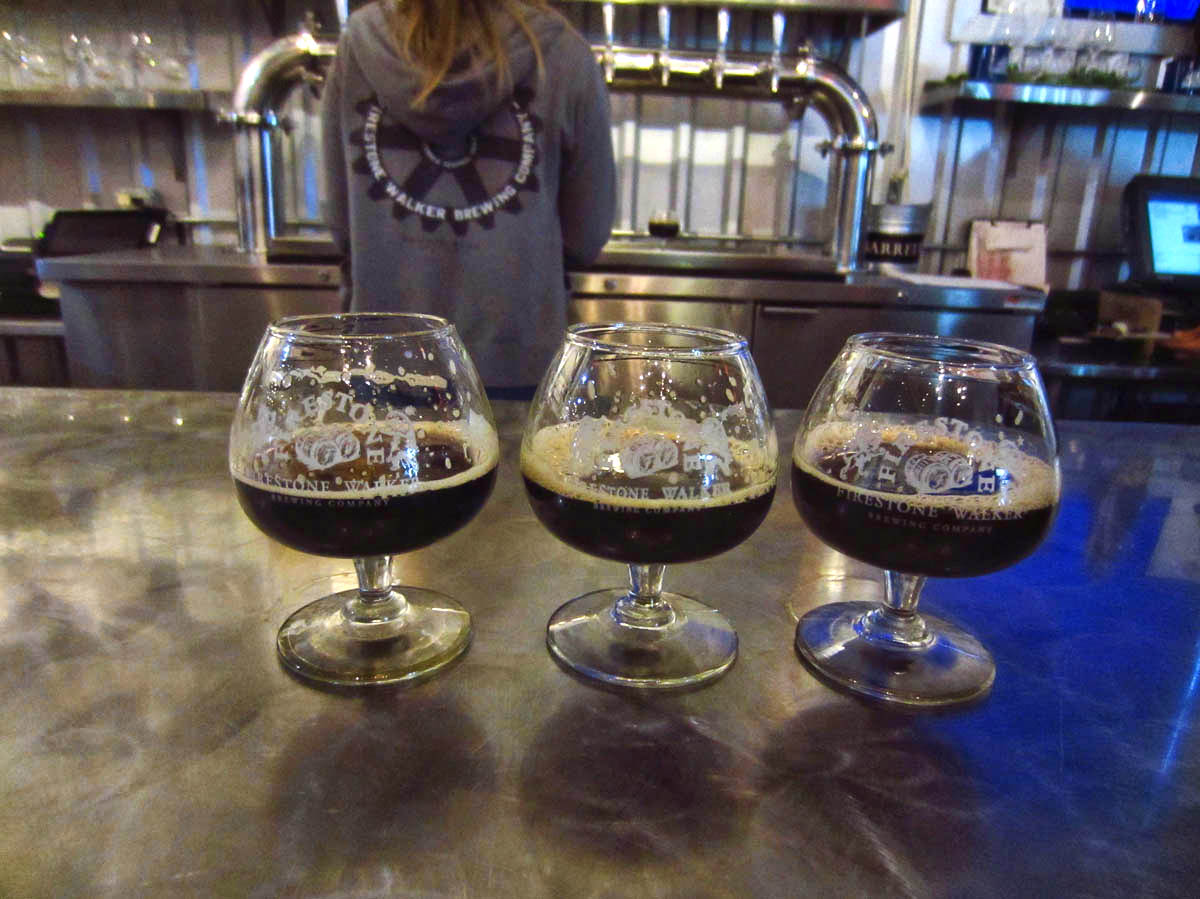 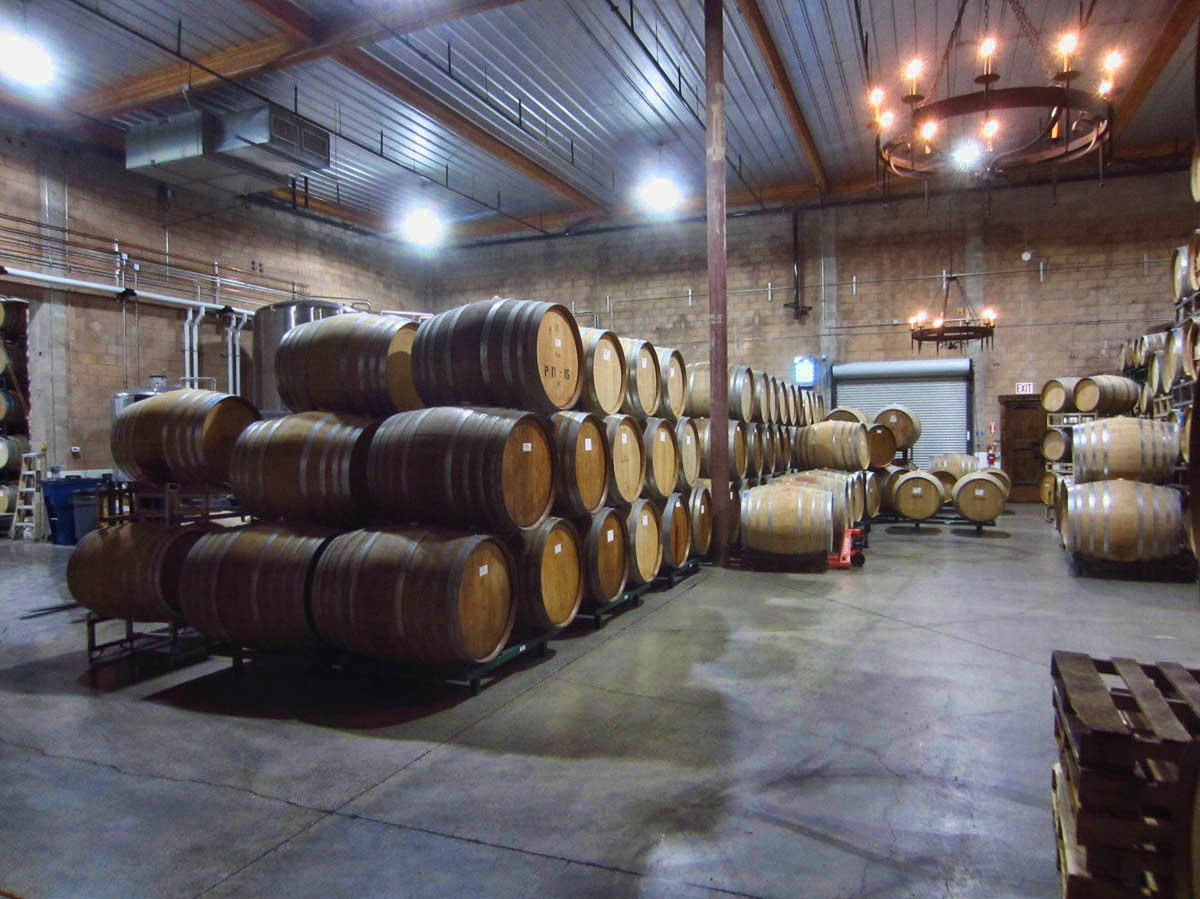 How serendipitous that Motel 6 is only 0.5 miles down the road.  You can drink to your heart’s content, stumble home, and they’ll leave the light on for you. 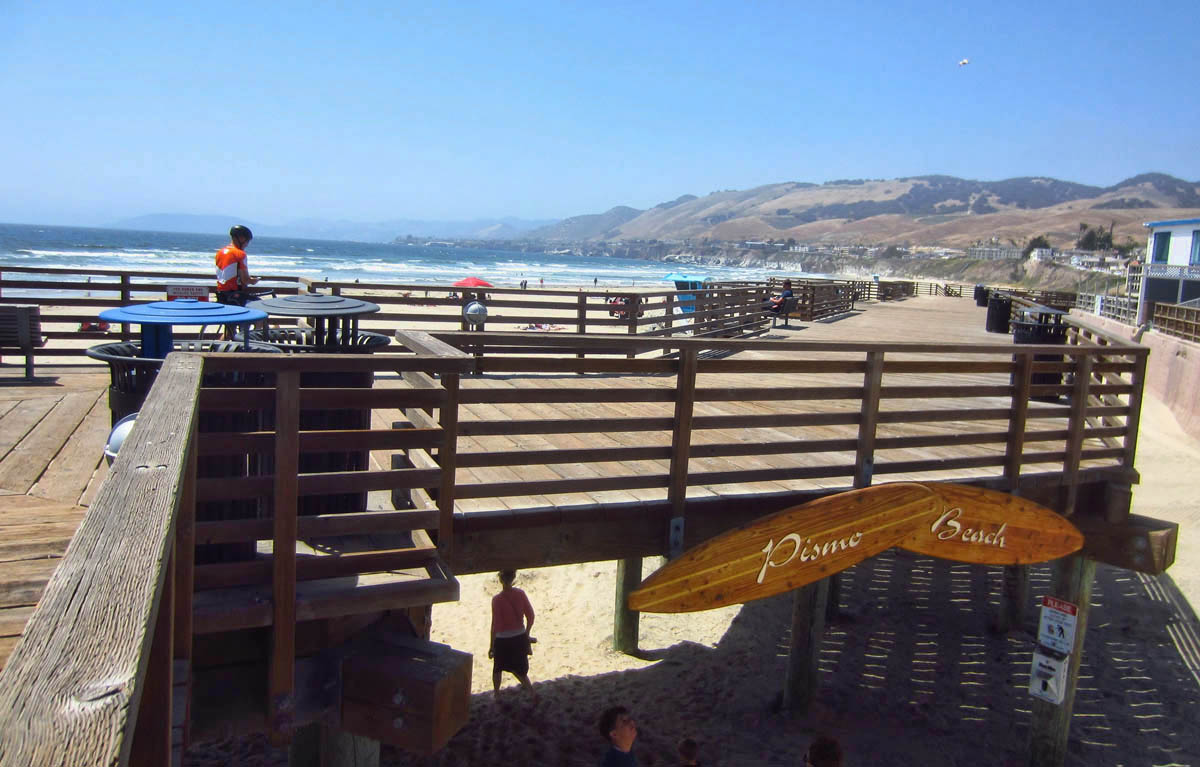 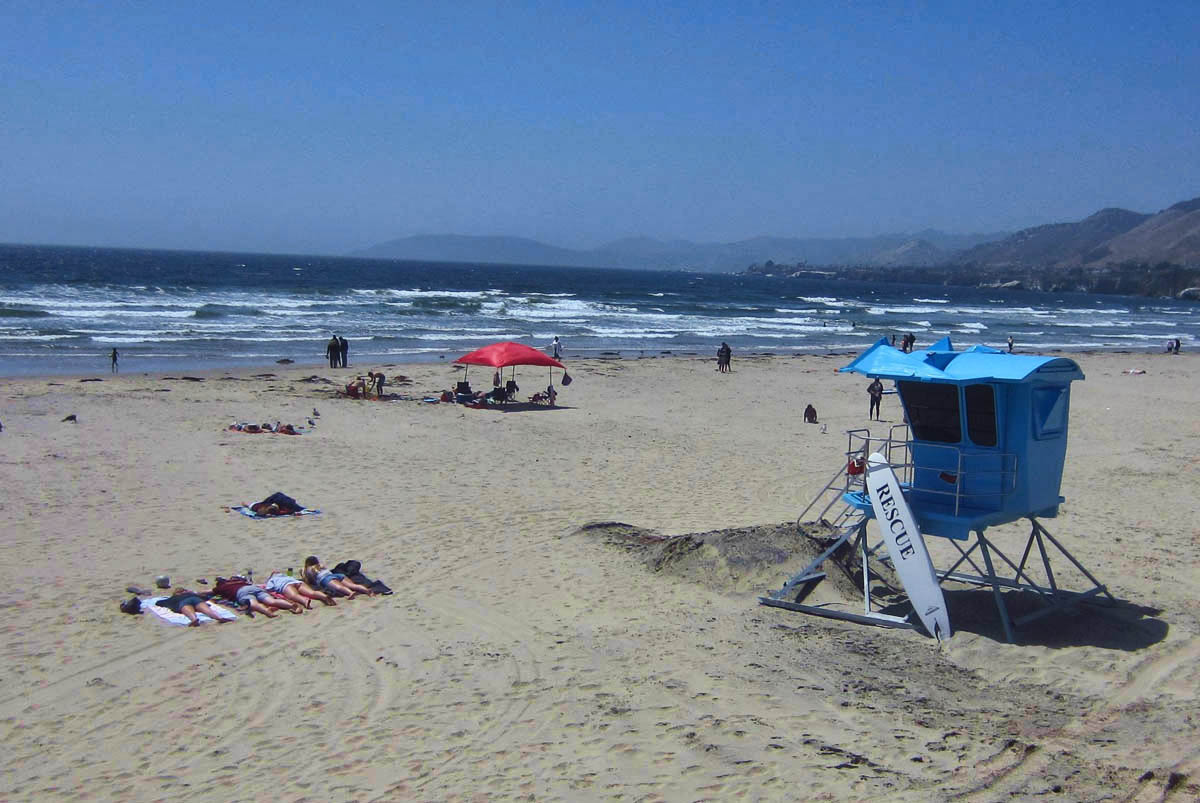 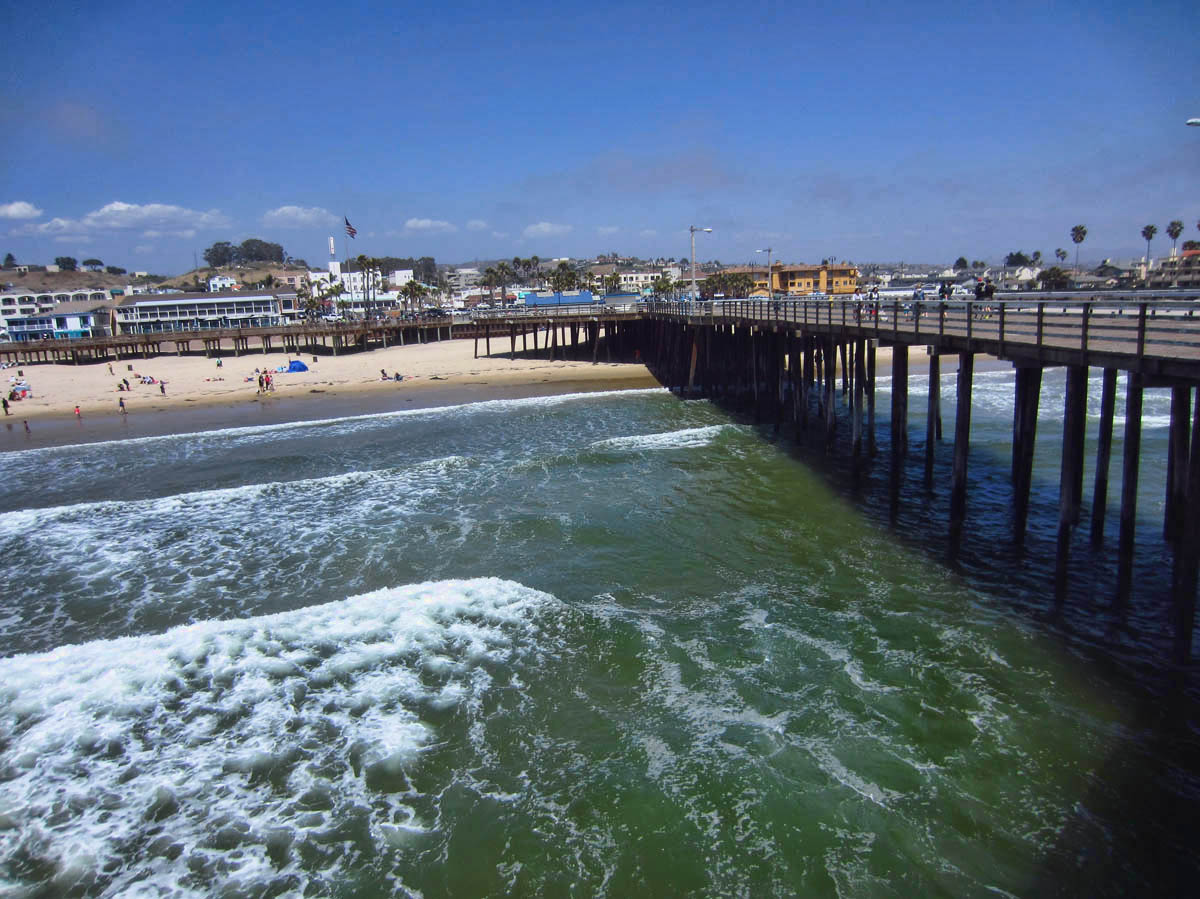 Pismo Beach used to be famous for their clams, until the sea otters ate them all. 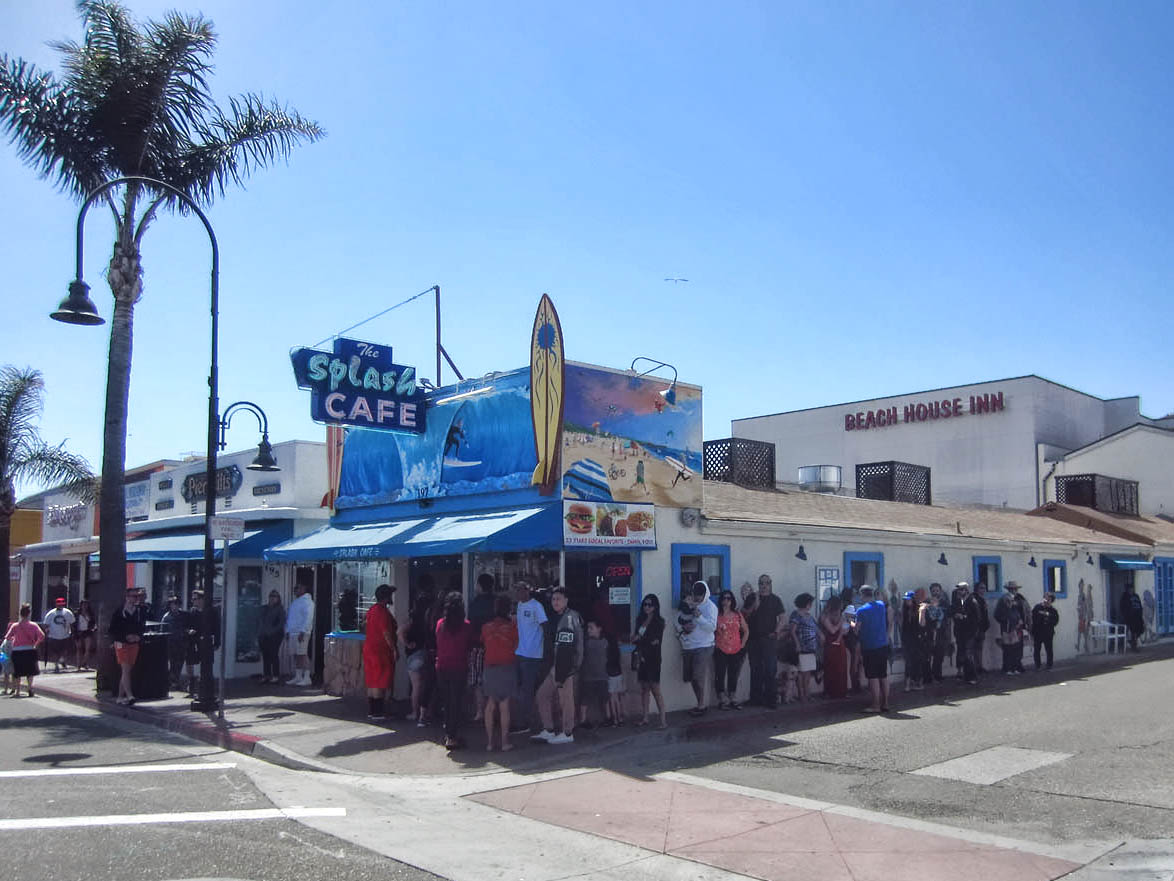 Now, they are famous for their clam chowder…provided the humans don’t eat it all. The line is down the block at “Splash.” 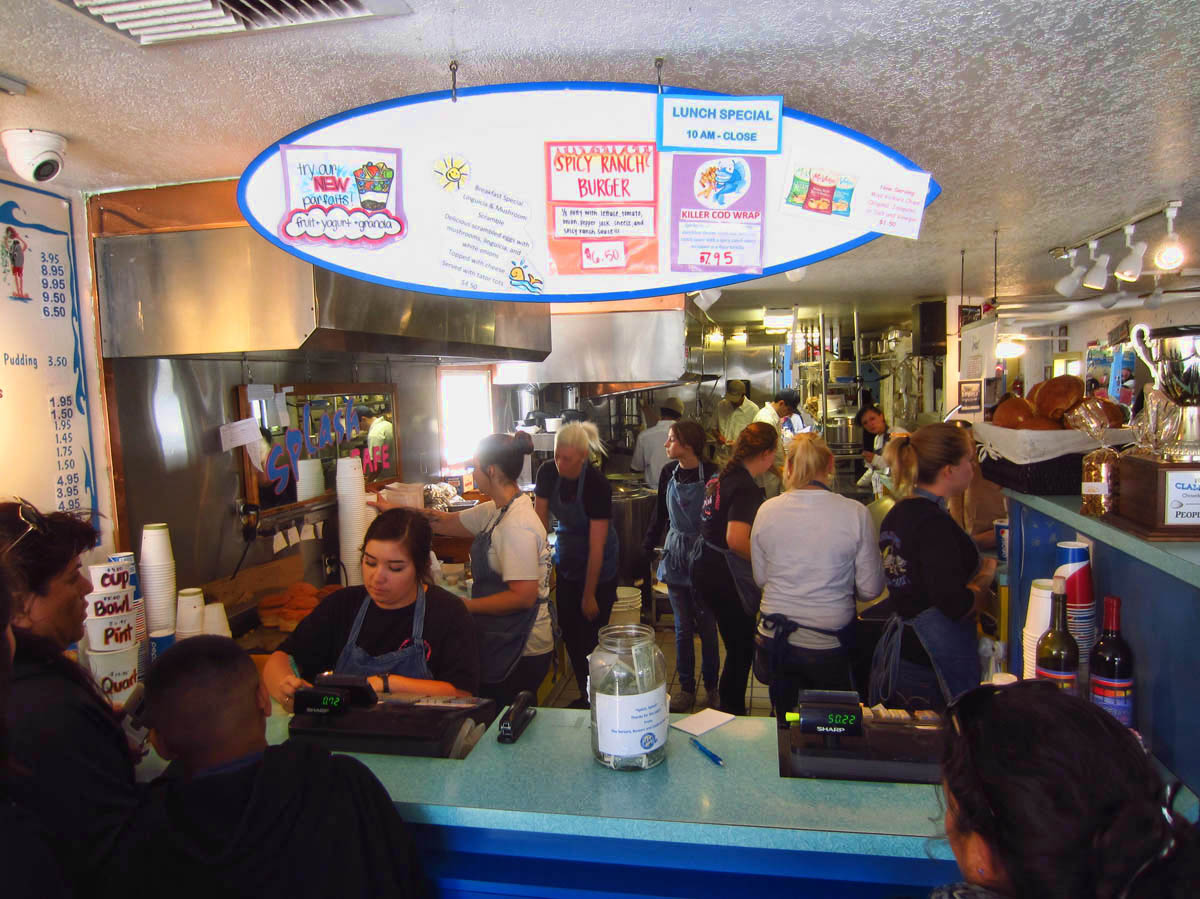 On the left wall are giant vats of clam chowder, their specialty served in a sourdough bread bowl. 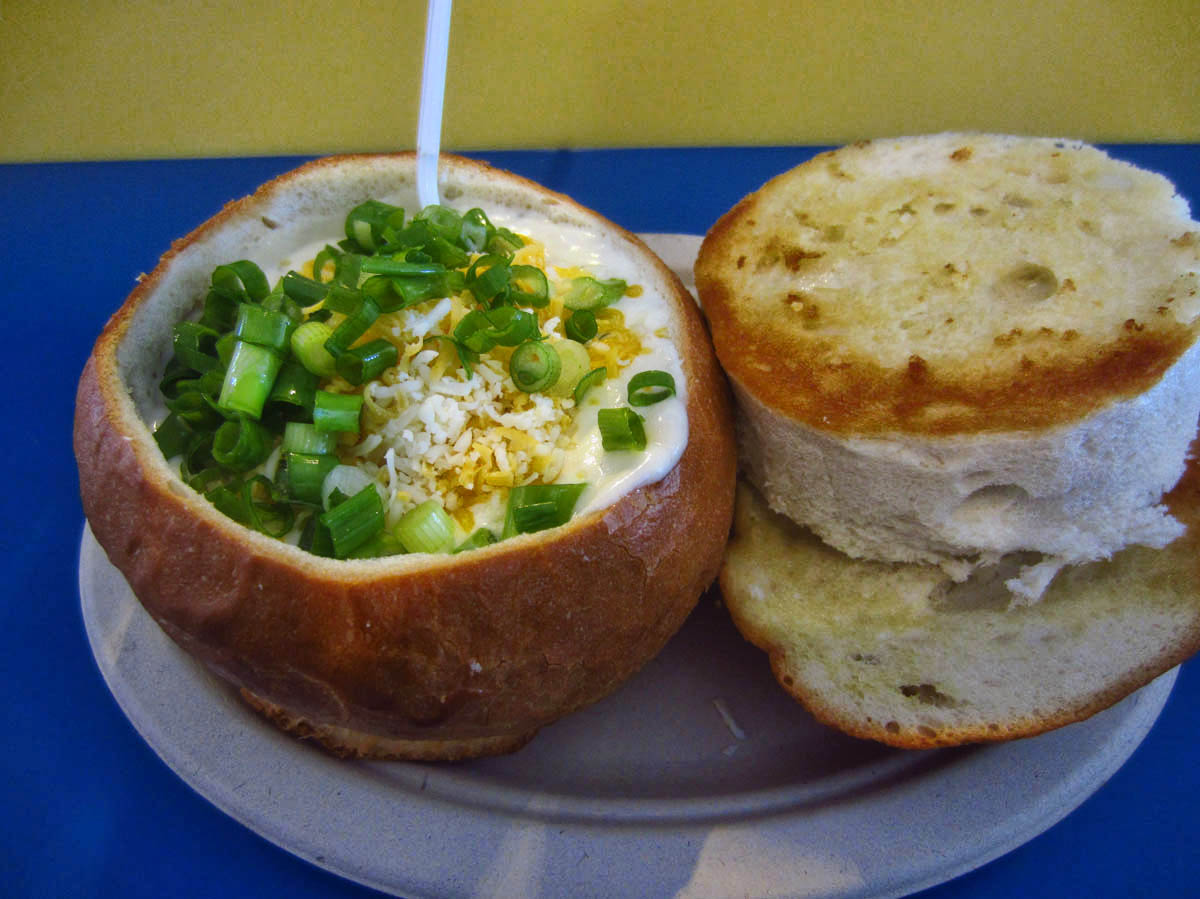 Yes, I waited in line to enjoy the clam chowder….mandatory rest stop on the Amazing Race up Hwy 1.