The three-day Port Townsend Wooden Boat Festival concludes on Sunday afternoon with a grand finale in an event known as the “Sail By.” For three hours from 2:00pm to 5:00pm, it’s a mass exodus of the sailing fleet as 300+ boats congregate in Port Townsend Bay for a festive informal parade.

In doing some research prior to the festival start, I somehow landed on the website for the Sound Experience, an environmental education and sail training program on Puget Sound aboard the historic schooner, the Adventuress. Sound Experience is a non-profit whose mission is “to educate, inspire, and empower an inclusive community to make a difference for the future of our marine environment.” The Adventuress was offering a three hour passenger sail during the Sail By, and it was listed as one of the best vantage points for viewing this end of festival celebration. And so I splurged. 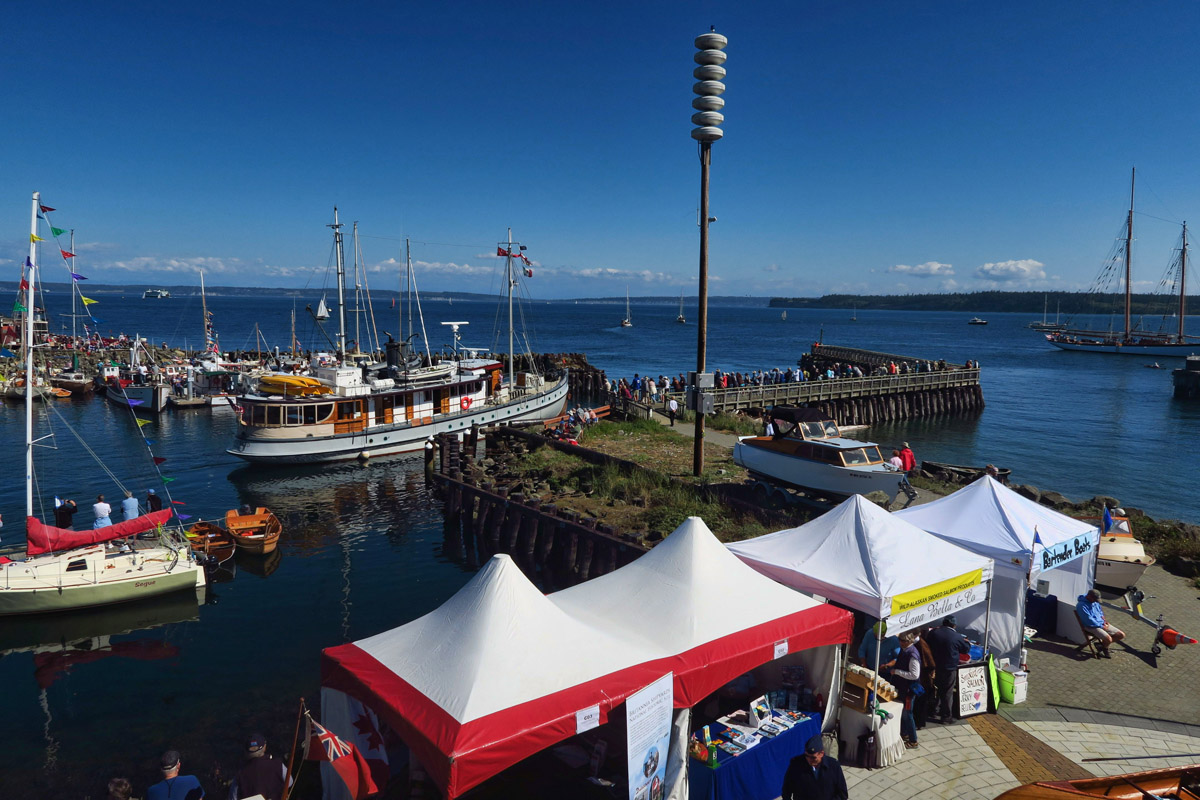 Boats are lined up to leave the Point Hudson Marina to participate in the “Sail-By.” 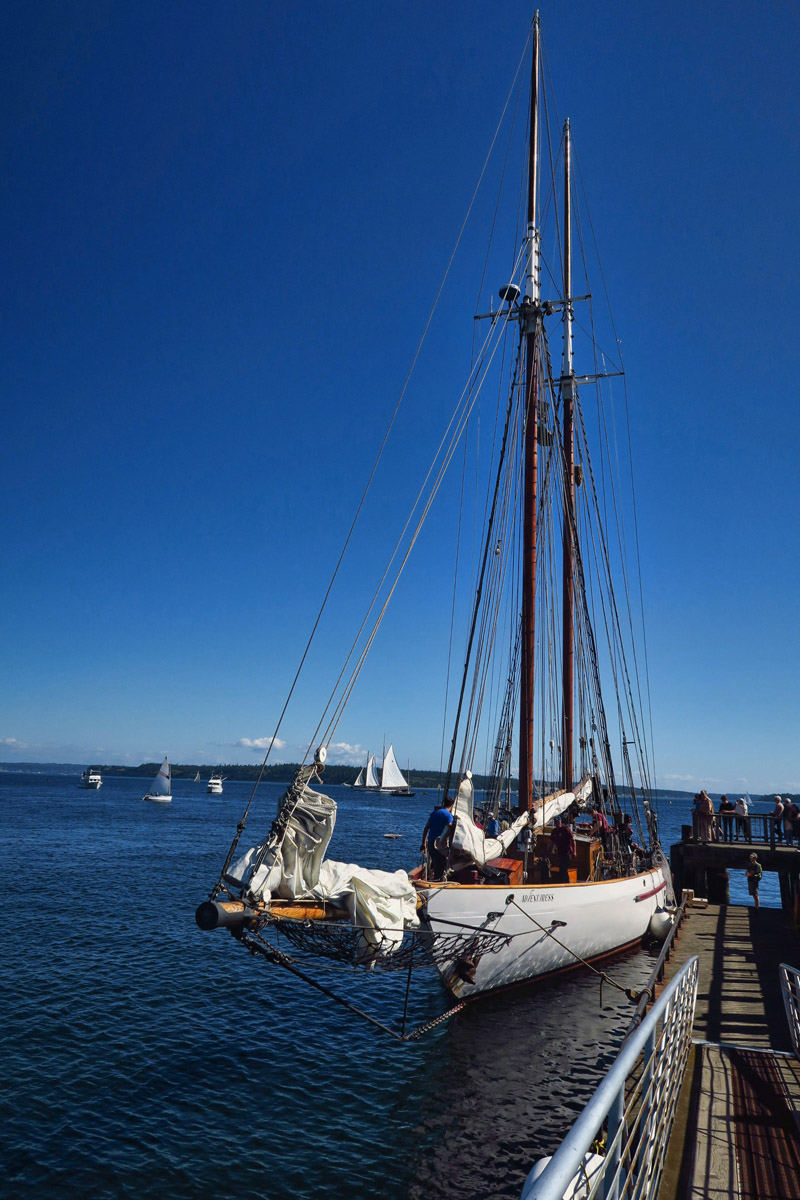 I have booked a ticket for a three hour sailing cruise during the Sail-By on the Adventuress. 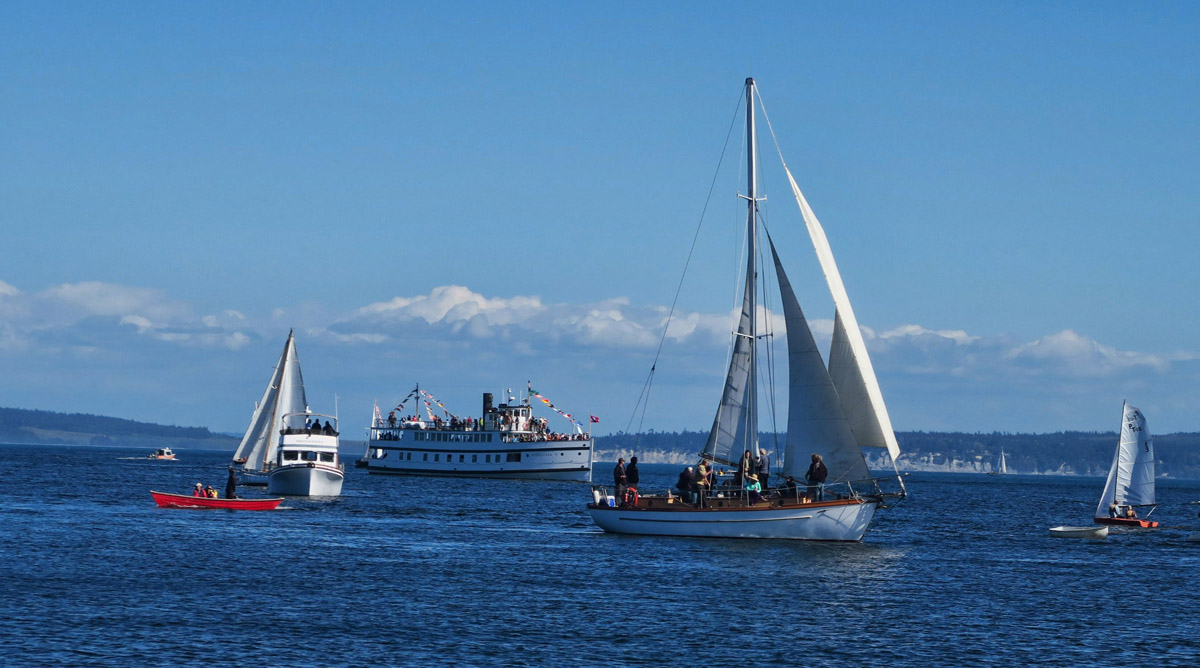 Vessels of all shapes and sizes enter Port Townsend Bay for the Sail-By.

I am pleasantly surprised to learn the Captain of the Adventuress is female. In fact, there are as many young women on the ship, some paid, some volunteer, as there are men. 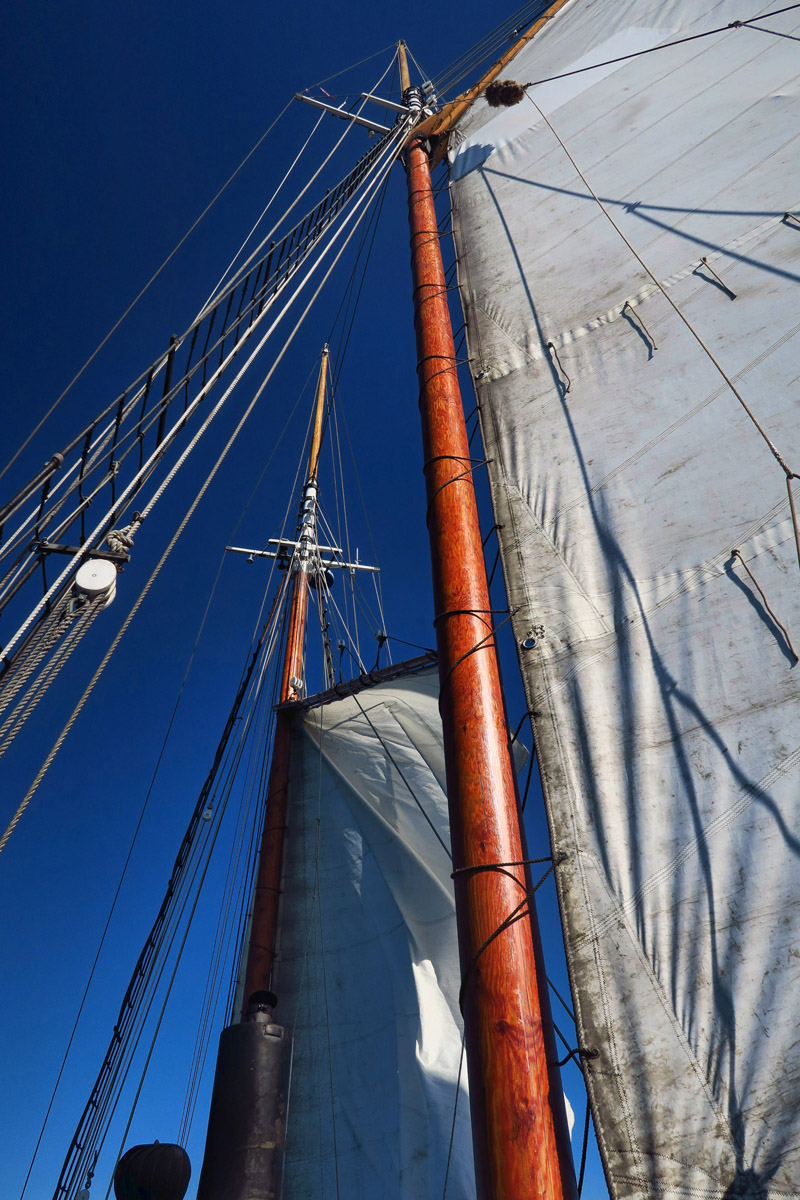 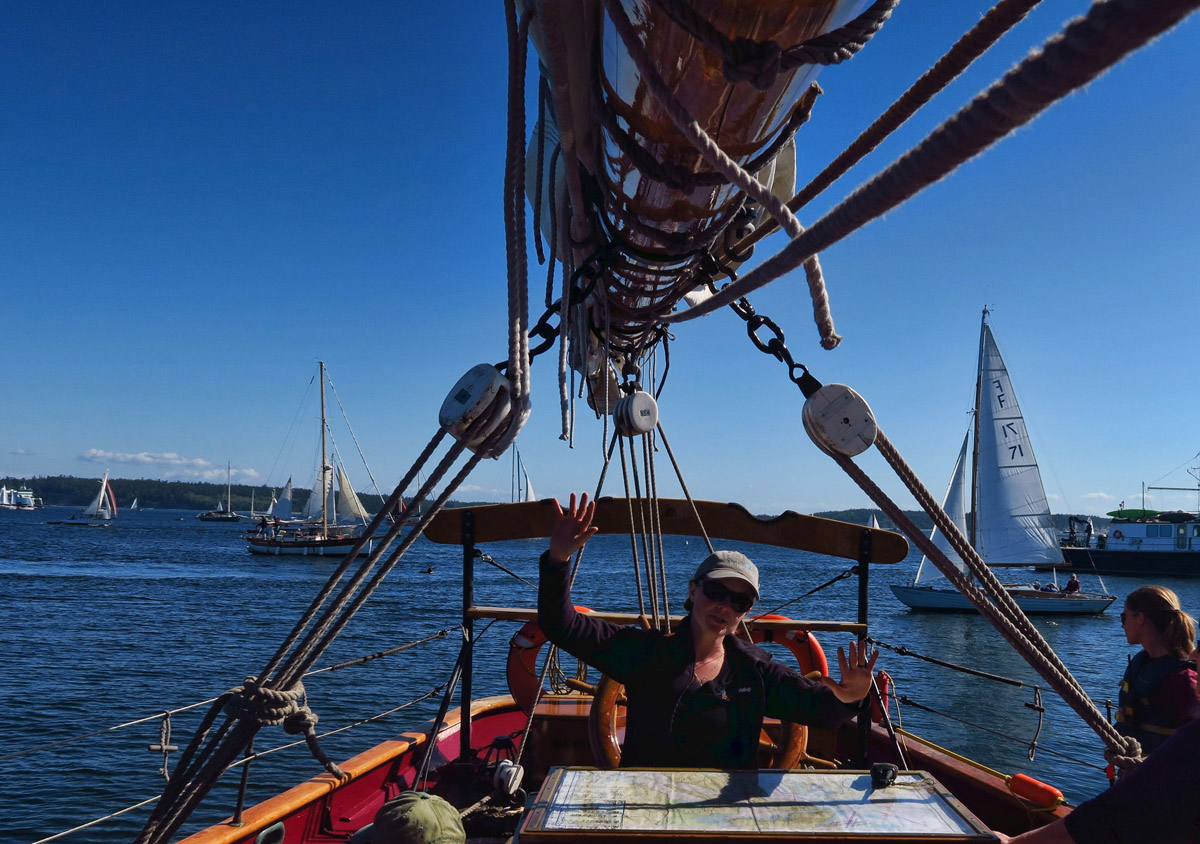 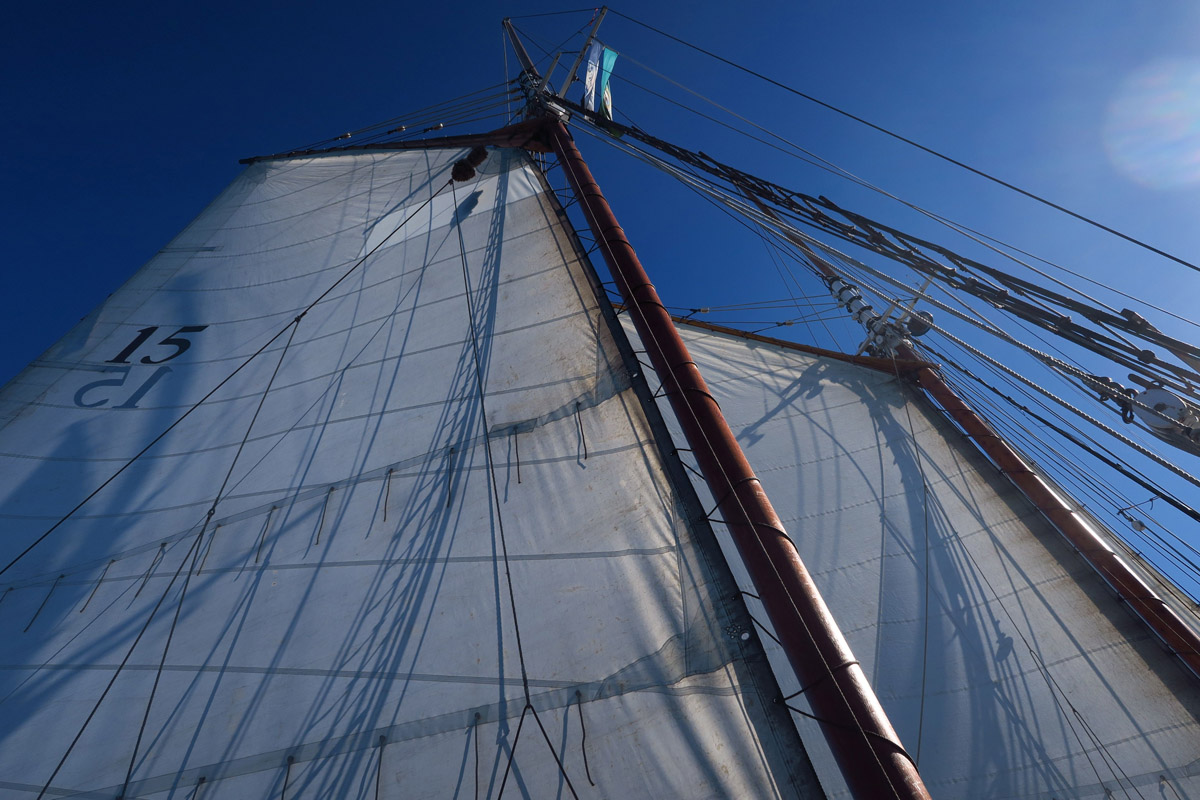 Adventuress is identified by Sail Nbr 15.

Once on board, we get a bit of history and sailing lore mixed in with a safety briefing in our muster station. We learn the 133’ Adventuress, a gaft-rigged schooner, was built in 1913. With a rich history which includes whale hunting in Alaska to guarding San Francisco Bay in WWII, she was added to the National Historic Register in 1989. 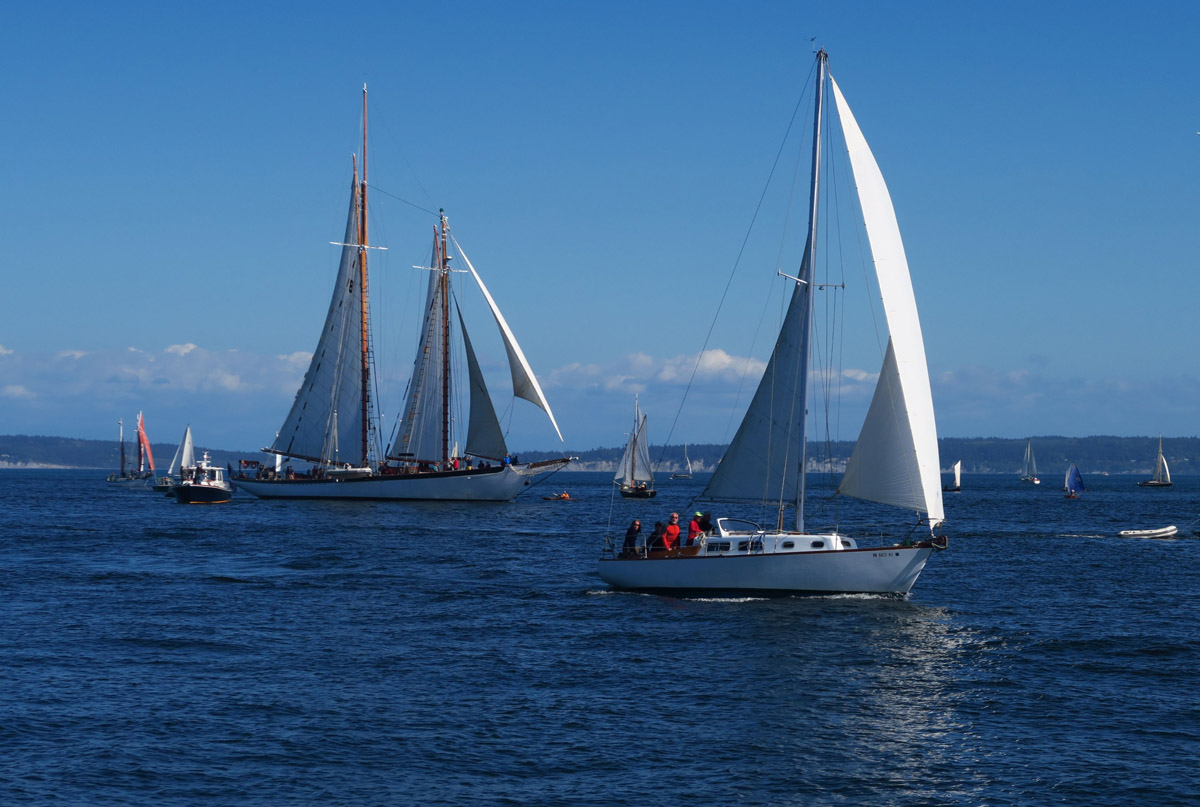 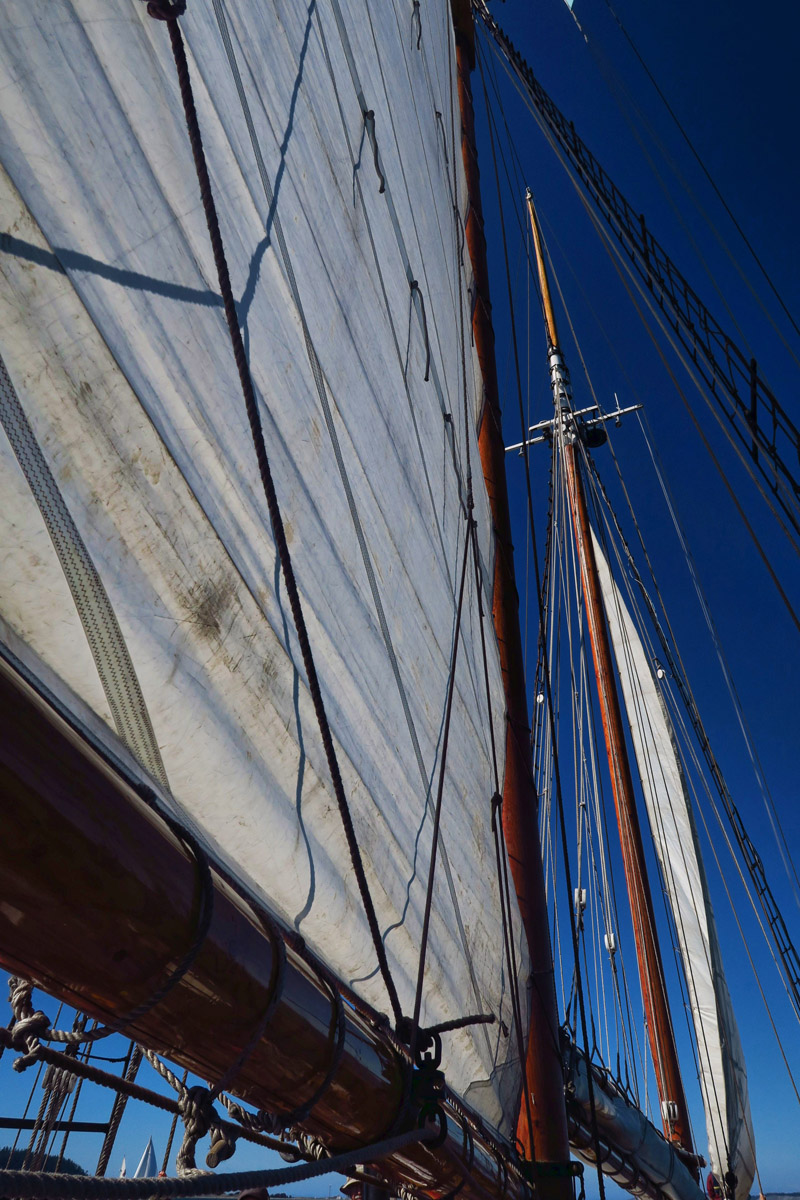 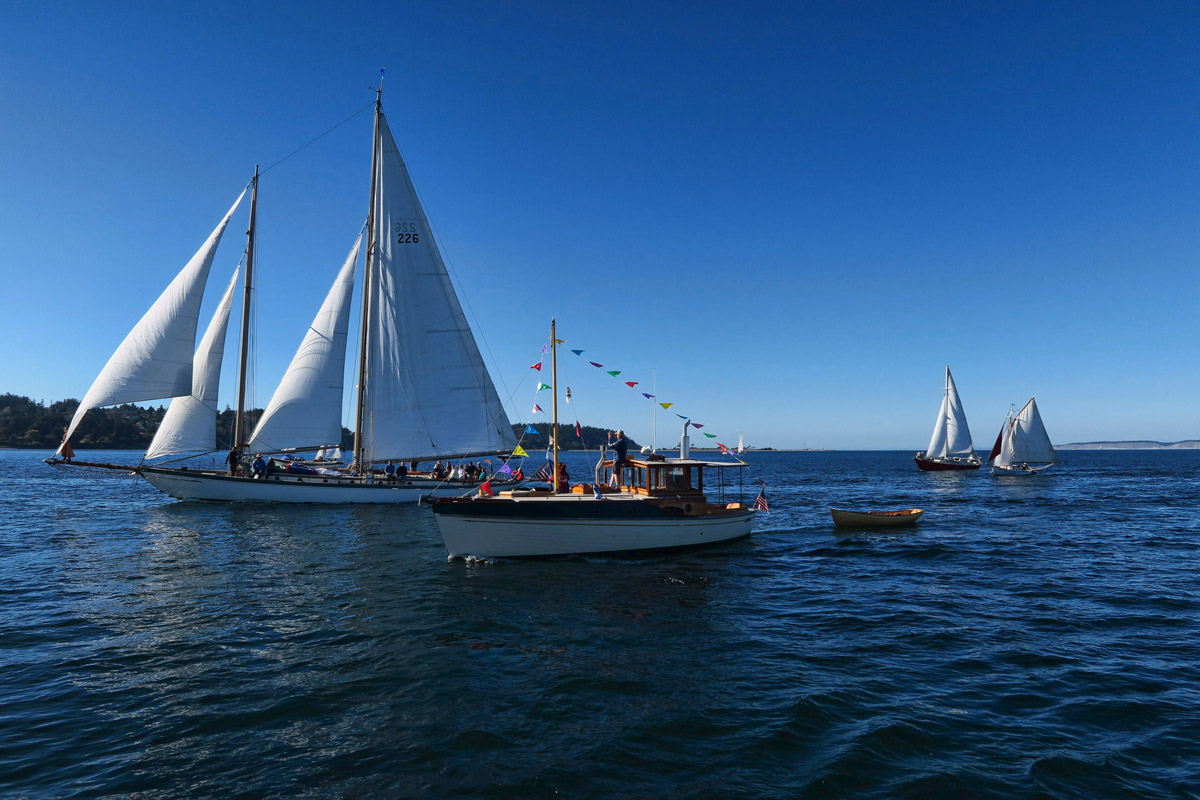 It’s a quintessential sailing day in Port Townsend with blue skies and steady breeze. Cool, with that nip of fall in the air that I just adore about September sailing. There aren’t as many aboard the ship as I had feared, making it easy to find a spot on the rail to view the gorgeous boats sailing by. Many are locals who know each other, so it’s fun to hear them shouting back greetings between boats. 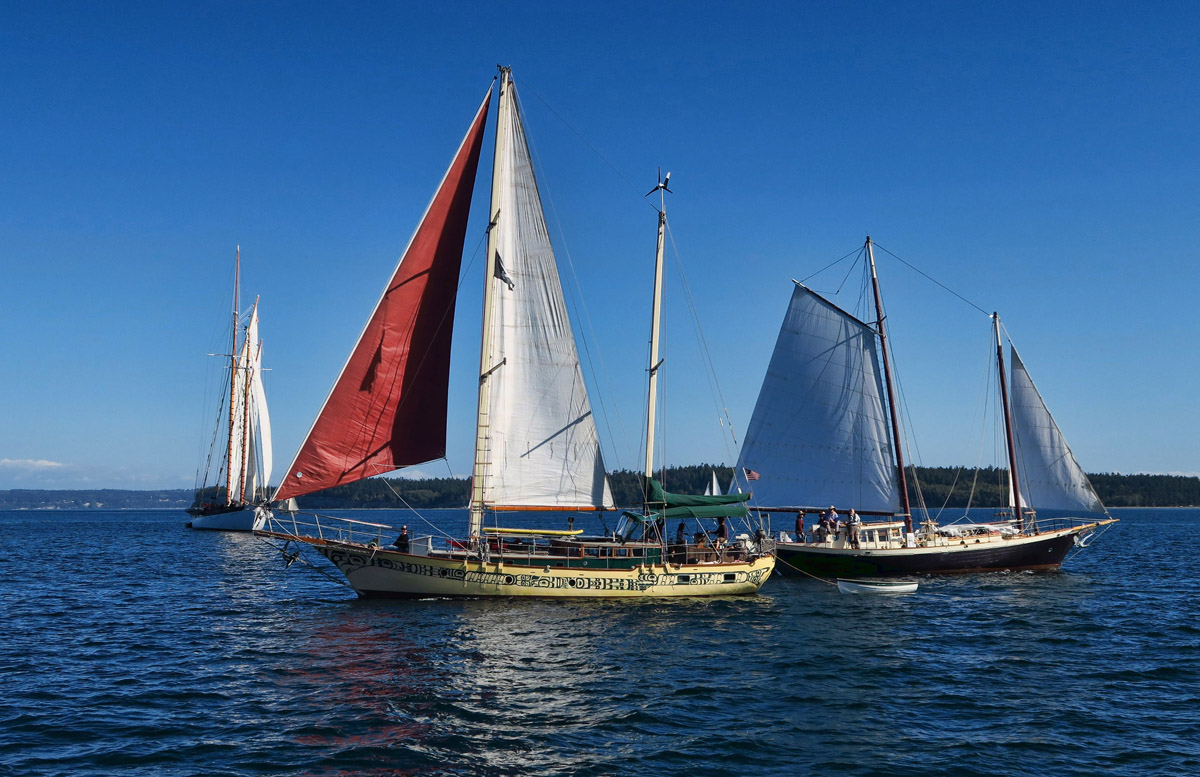 This boat appears to have some tribal reference, but not sure what. 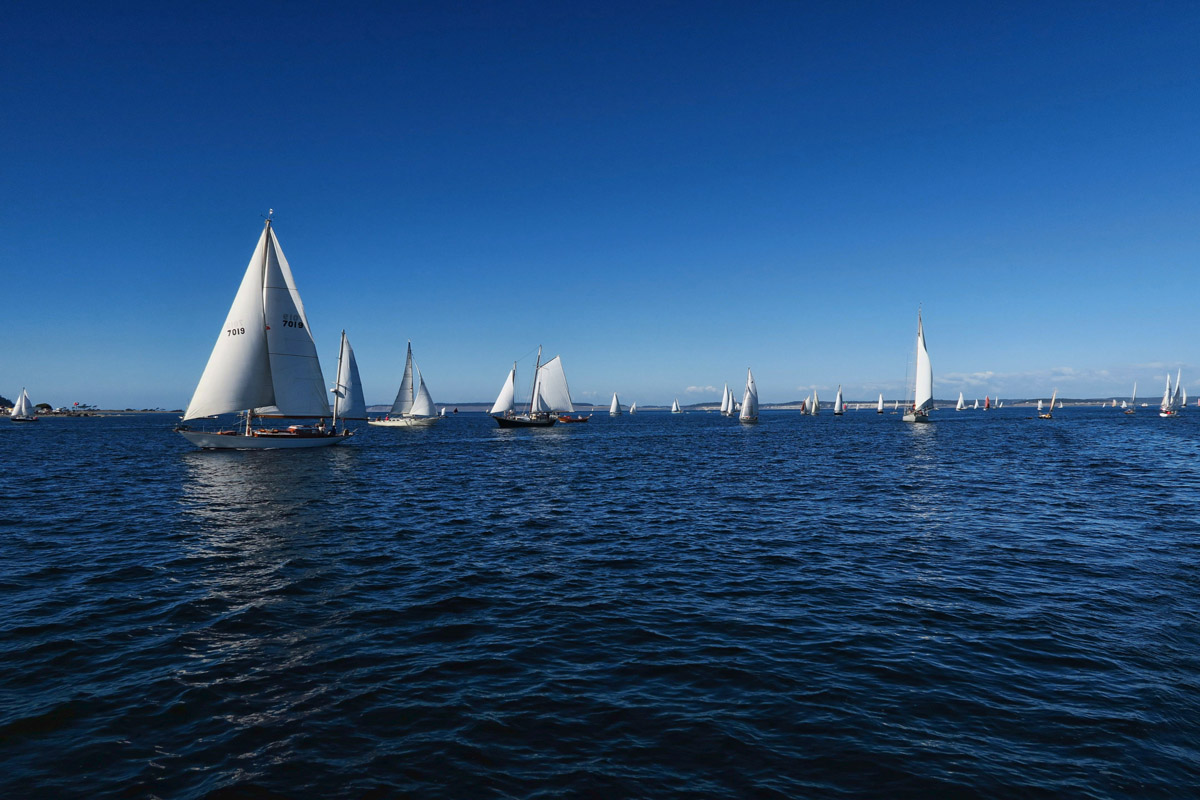 Lots of traffic in the bay 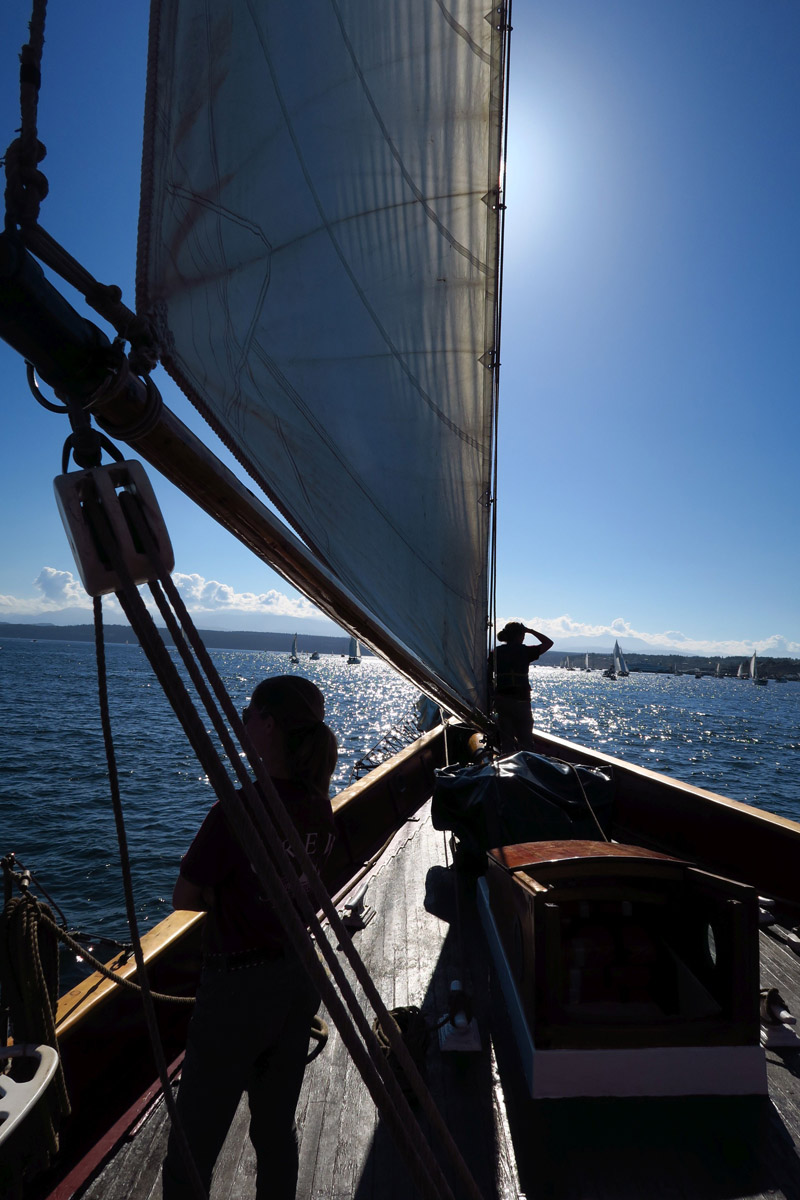 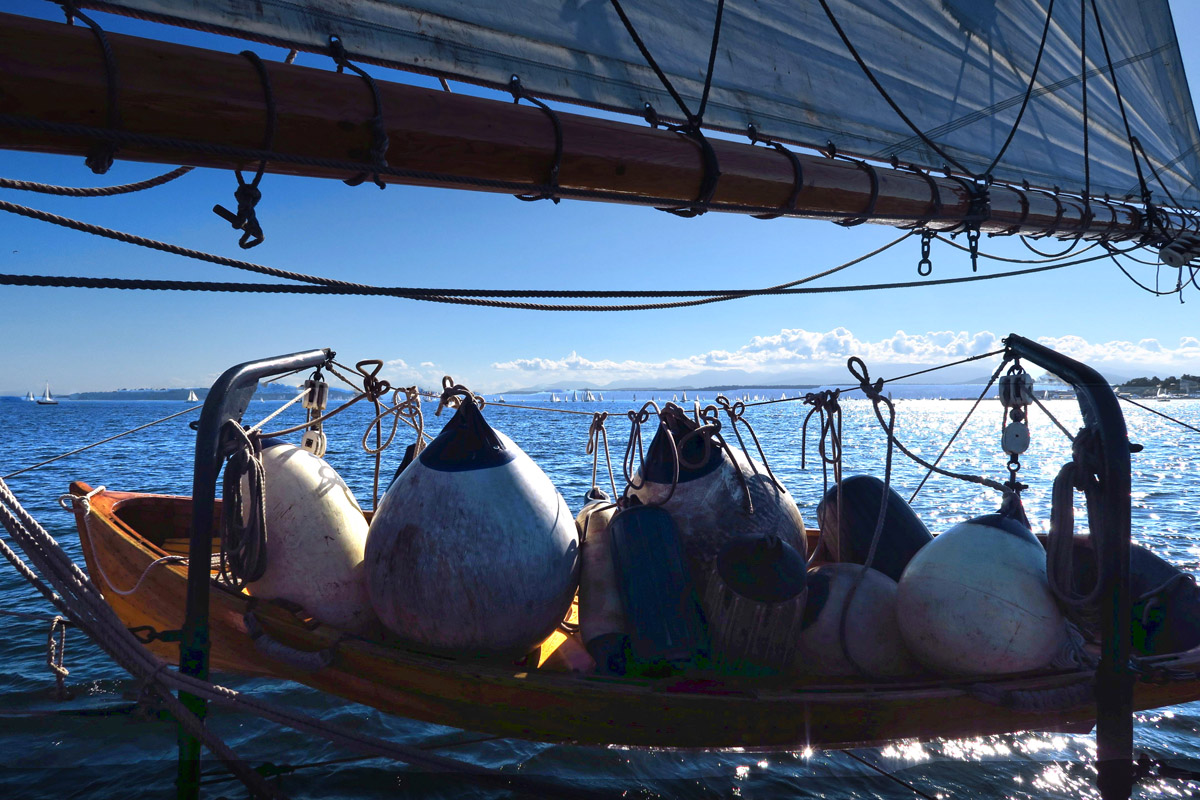 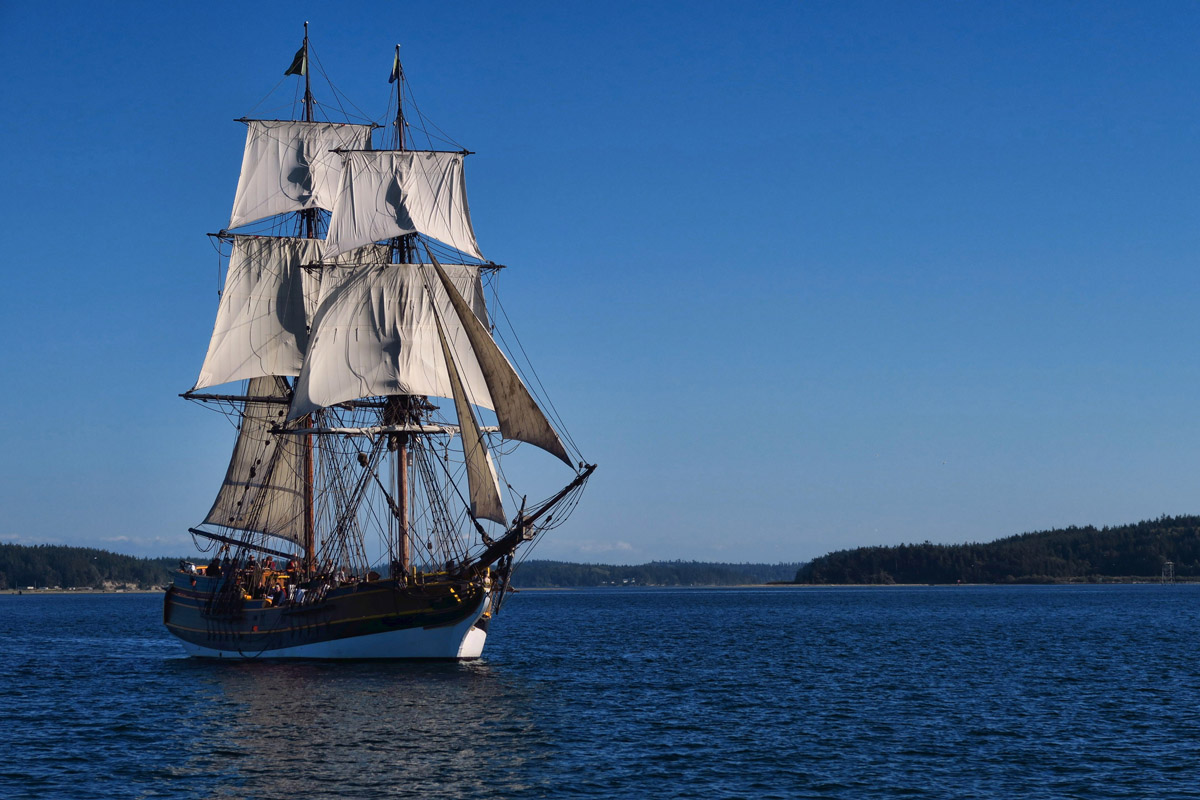 The Lady Washington, replica of an 18th century, 90 ton Brig.

Unlike other Tall Ship sailing cruises I have been on before, we are actually going to raise the sails and turn off the motor! What a novel concept for a “Sail By!” The crew enlists help from the passengers to haul the heavy sails. Instead of a “heave ho,” this is done to the cadence of the traditional Sea Shanty, “Runnin’ Down to Cuba.” 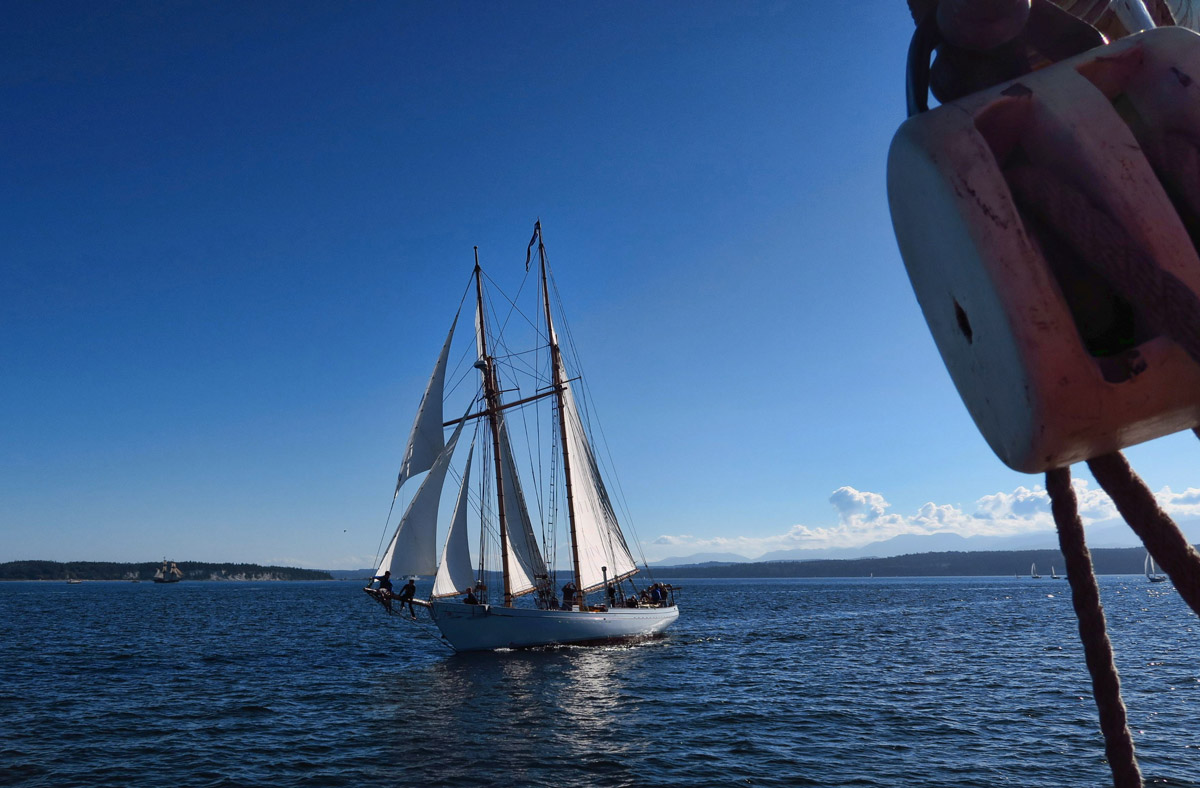 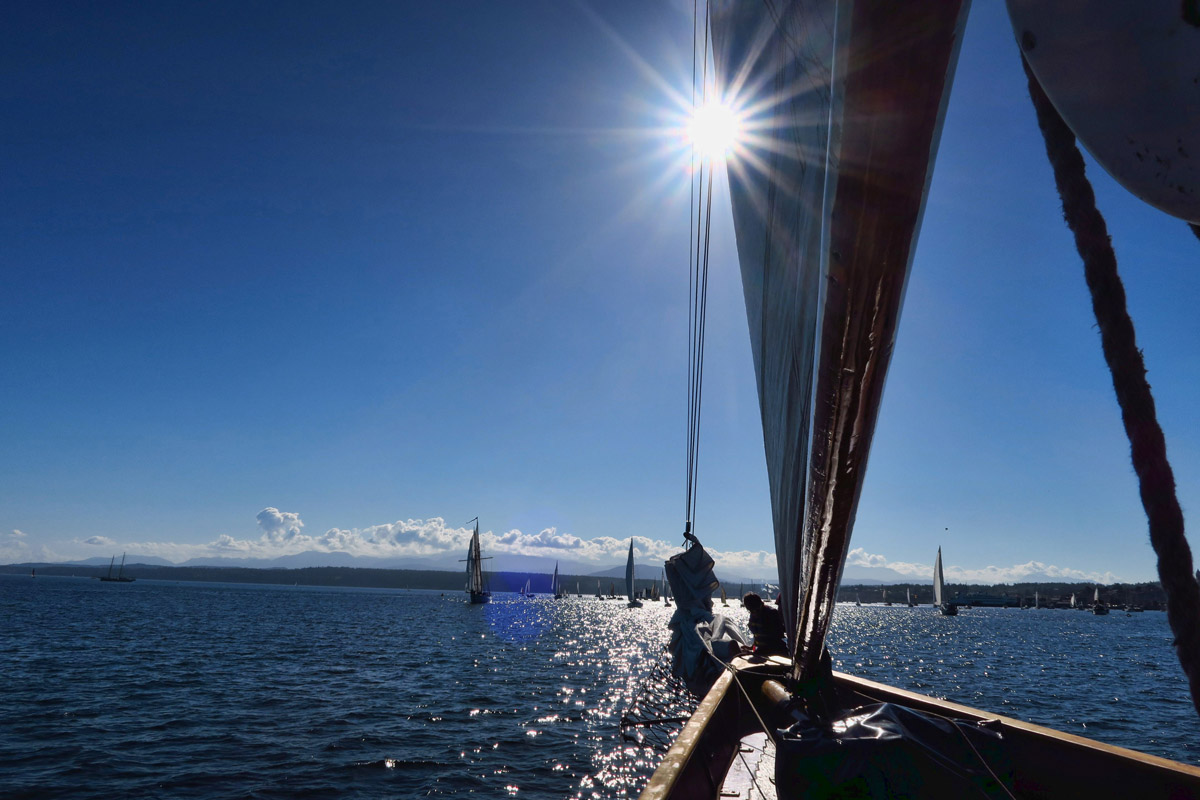 Practicing my homework from the digital photography seminar, “Don’t be afraid to shoot into the sun.”

Captain Rachel navigates us through the heavy traffic as boats of all sizes and shapes fill the small bay area along the waterfront of historic Port Townsend. Everything from tall ships to stand up paddle boards. 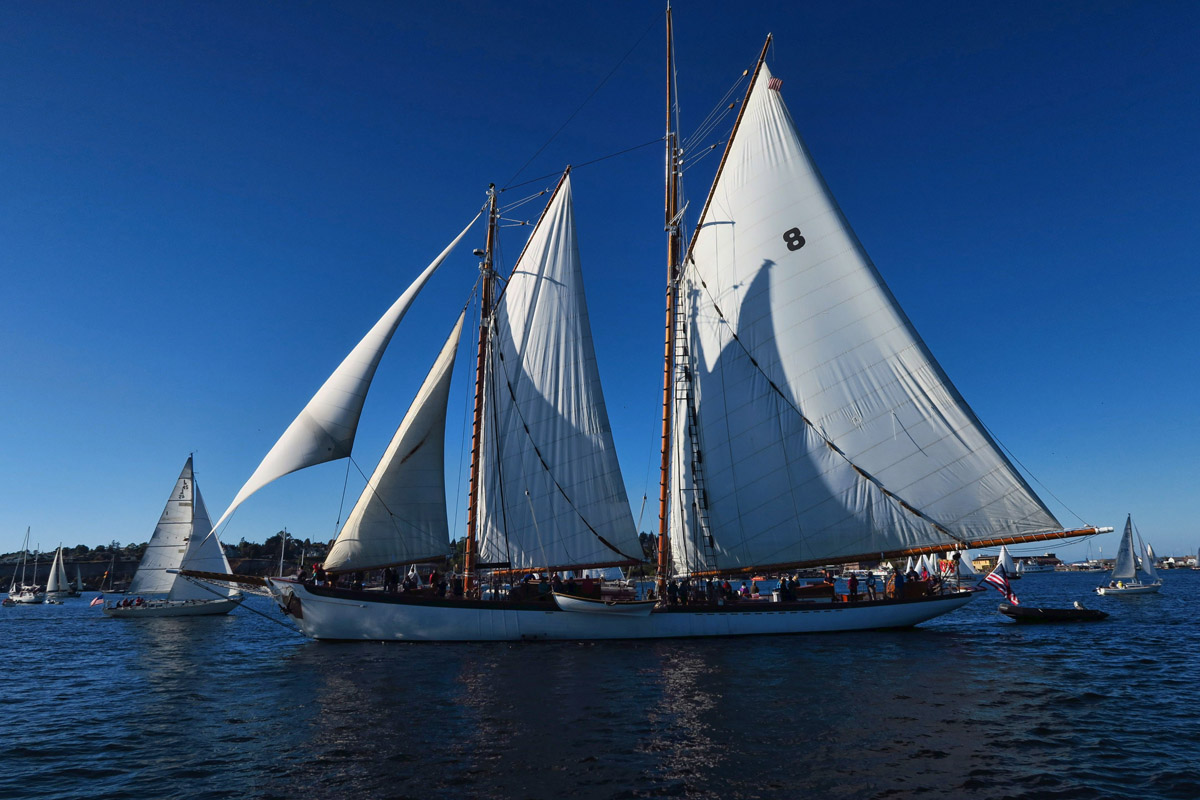 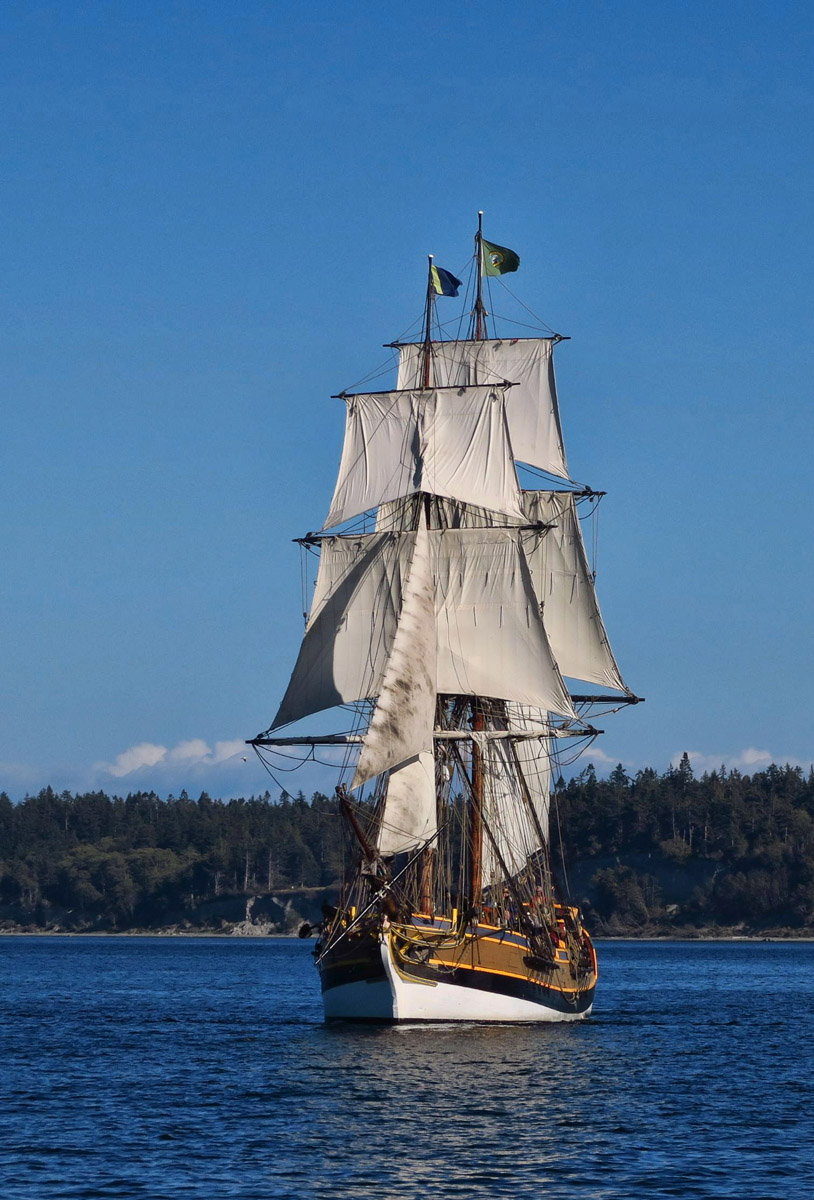 Lady Washington has starred in many films, including role of HMS Interceptor in Pirates of the Caribbean. She has a foreboding profile on the water. 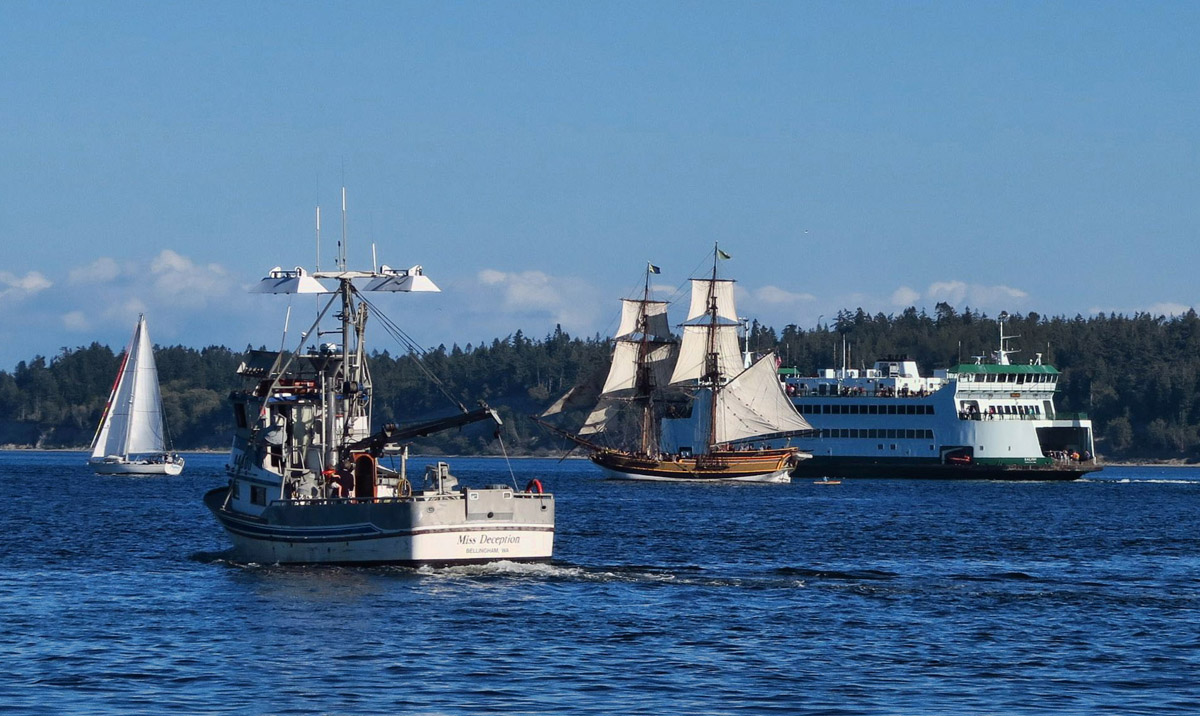 Even a few fishing boats get in on the festivities. 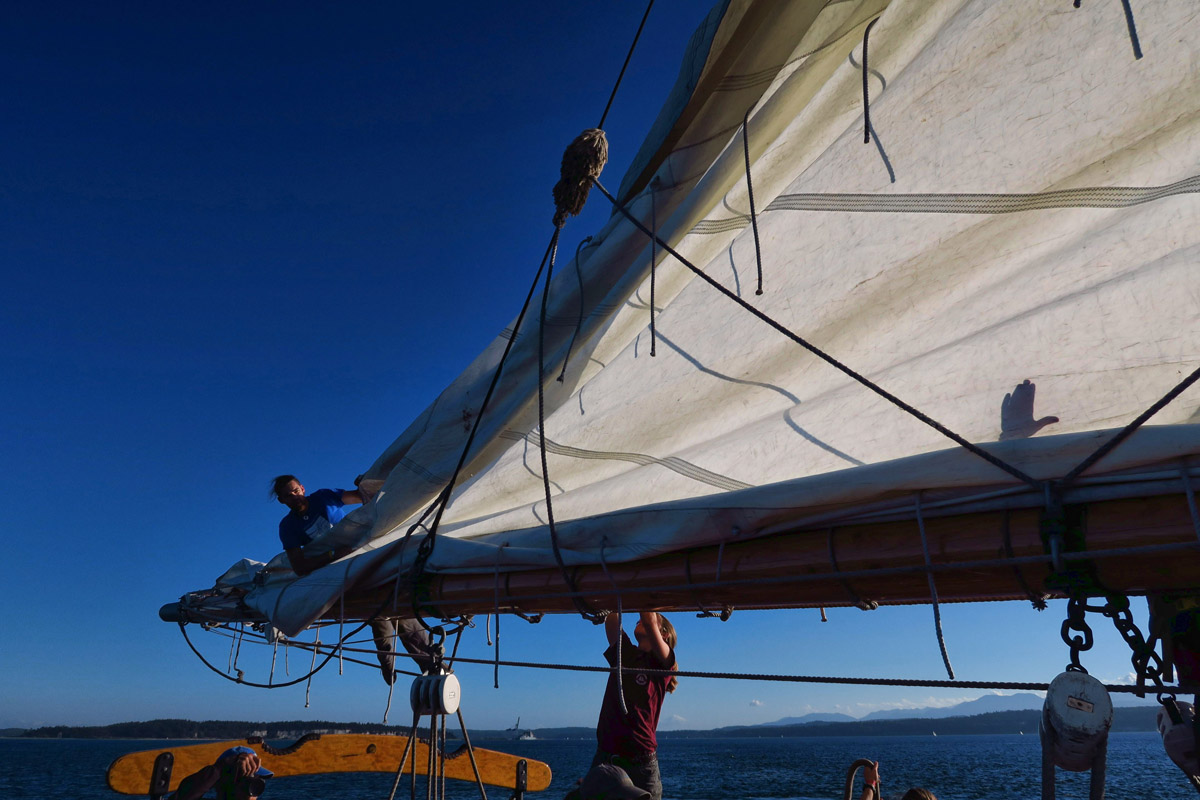 As the sun drops lower in the sky, the crowds on the water begin to wane. Now with less traffic to navigate on the bay, Captain Rachel asks, “Anyone want to take the helm?” I can’t imagine a more thrilling ending to such a fun-filled weekend! 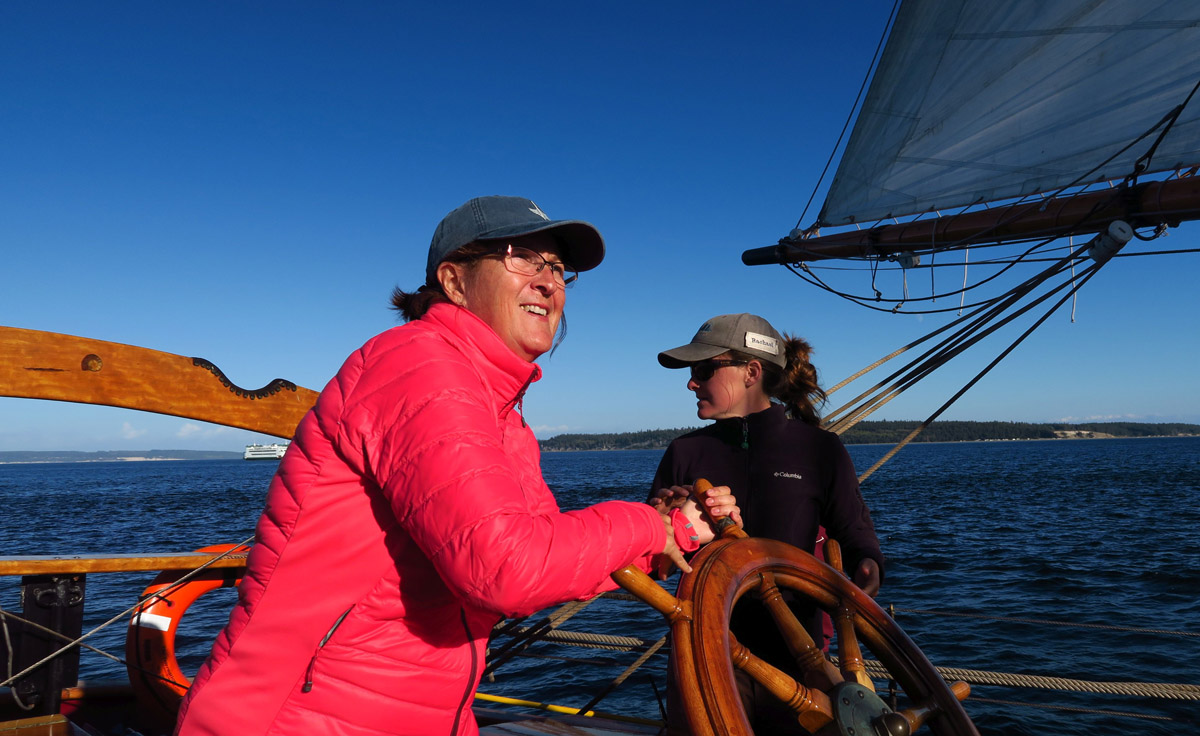 First time I have ever received navigational instructions to “turn three ‘pegs’ to port.” 😉

Give me a gal, can dance fandango
Way me boys for Cuba
Kiss like a melon and sweet as a mango
Runnin’ down to Cuba

16 thoughts on “Sail By on the Adventuress”

Leave a Reply to Tom the awning fixer Cancel reply