After reading friend’s blog posts all summer from the Sawtooth Mountains, I have my heart set on seeing that mountain range.  I’ve been planning this route across the Banner Summit and down into Stanley for months.  But the strange weather patterns that pummeled the Northwest coast are now moving across the mountain range, dropping temperatures into the teens on the heels of the rains.   I’ve been watching the weather several times a day, vacillating on whether to go for it, or give up for another year. 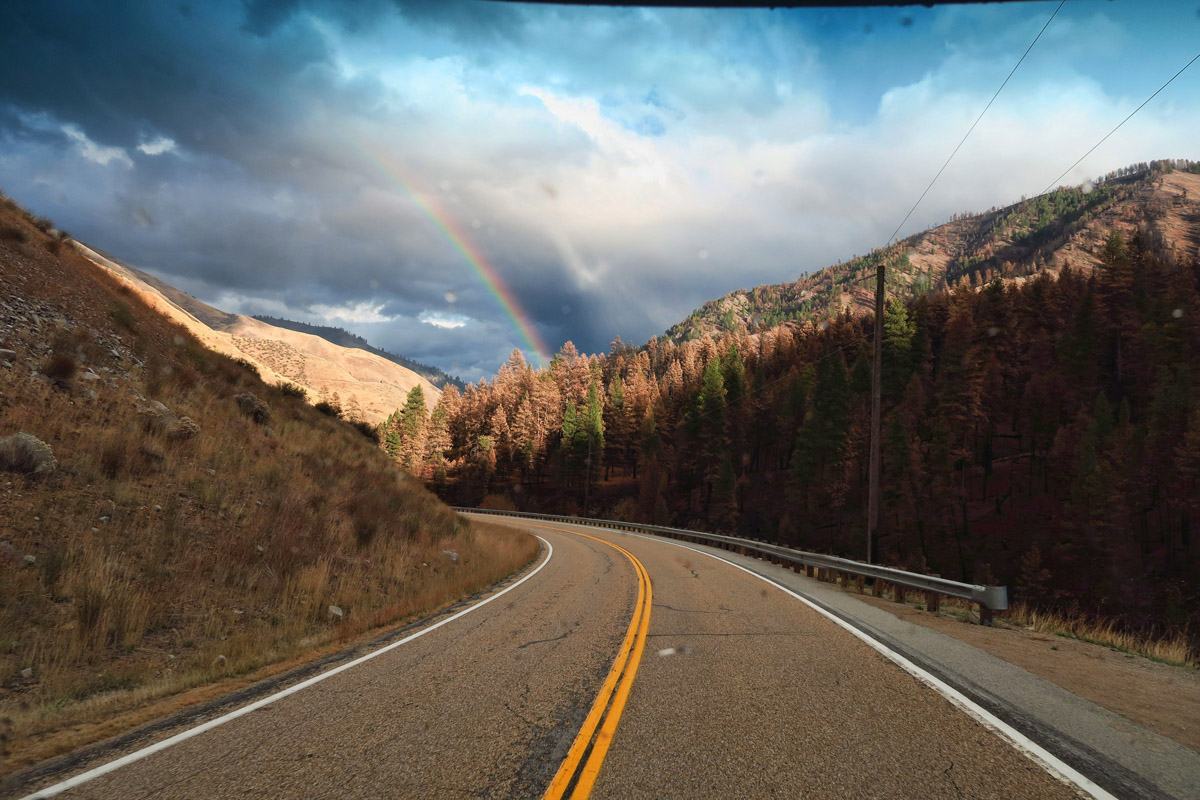 I’ve seen more rainbows along Idaho Scenic Byways than any place else. 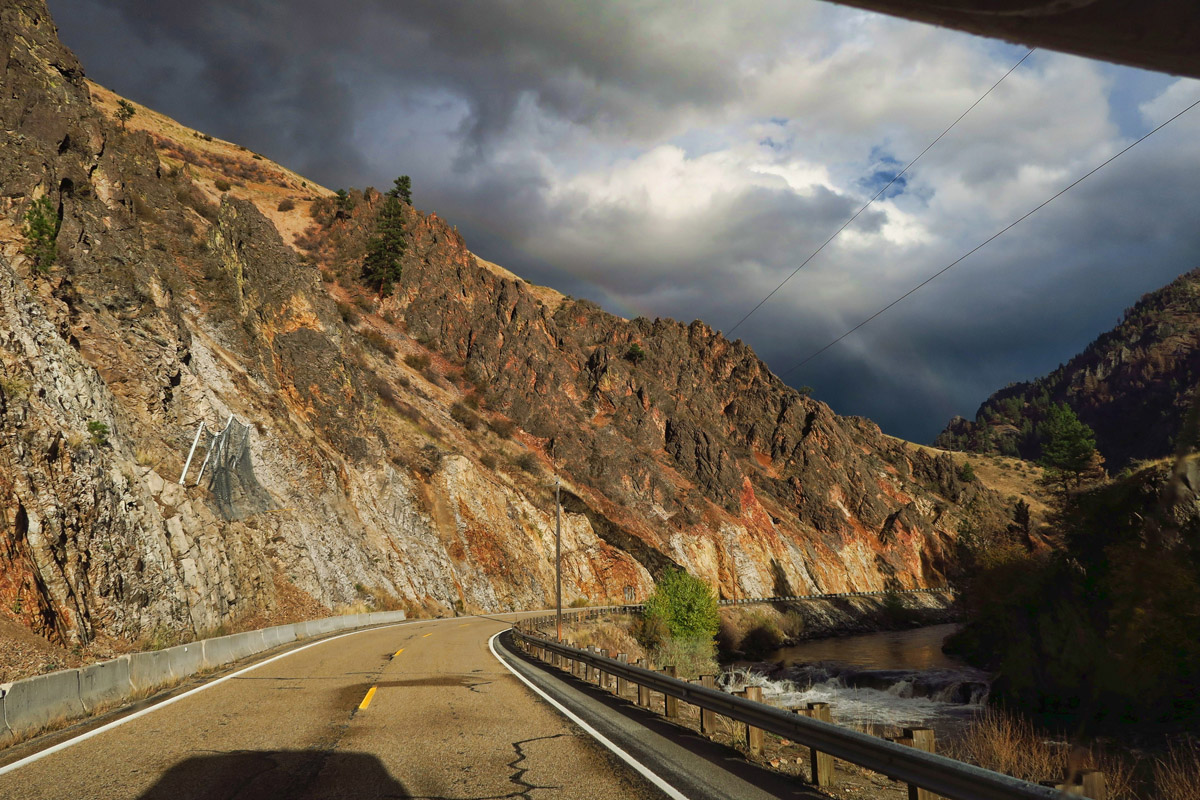 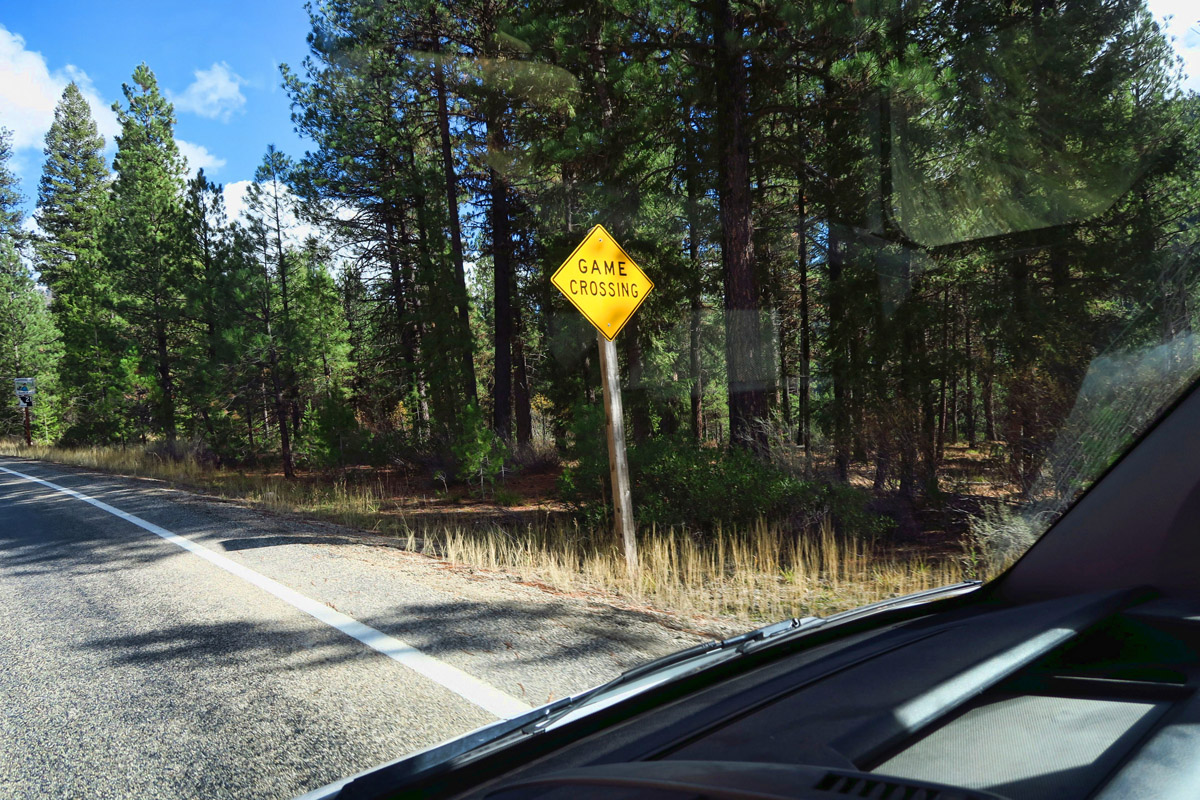 I hadn’t noticed until Don pointed it out, but instead of “Wildlife Crossing,” the signs in Idaho say “Game Crossing.” Fair game?

Stanley, Idaho has many aspects that appeal to me.  First of all, it’s only got a population of 63 people.  That tells me it’s likely to be quirky and eccentric, similar to the imaginary town of Cicely, Alaska in the old TV series, “Northern Exposure.”   And it sits in the foothills of one of the most gorgeous mountain ranges in the Northwest, the Sawtooth Range.   And “a river runs through it,” more specifically that Salmon River that I vowed to follow all the way through Idaho.  In fact, the headwaters of the Salmon start in these same foothills, as well as many picturesque lakes in the area.

But Stanley also has another claim to fame.  As blog follower Nancy pointed out, Stanley is reported to be one of the coldest towns in the lower 48.   Stanley’s alpine subarctic climate is caused when cold air from the mountains gets trapped in the valley, resulting in extreme temperatures.   Frost occurs on average, 290 mornings out of the year.

This is a fact I have not yet disclosed to Don.  He’s already freezing to death, having spent the summer in the Gates of Hell, Central Texas.   Don flew to California in the dog days of August to purchase his Navion, while trying to remain within the airlines baggage allowance.  So his best defense against the cold has been his hoodie sweatshirt.   I’ve loaned him a hat, a scarf, and some long handles, along with my dearly beloved, Mr Buddy Heater, all to try to entice him up over the mountain range.  😉

We have been positioned to move up into the mountains from McCall, following the Ponderosa Pine Scenic Byway all the way through the Sawtooths.  But a cold snap is on the way with predicted lows down to 16°.  I’ve had the Winnie down to 17° before, but that was with electric power and a 100W lightbulb in the plumbing bay for warmth.   I tried researching a campground in Stanley with hookups, but everything appears to be closed for the season.  I’m not even sure we will be able to find a place to stay, let alone not get frozen in up there.  Or worse yet, halfway there!   Highway 21 is prone to closures during winter months due to heavy snowfall.

For two straight days, the one-way conversation has gone something like this:

Throughout this entire two month caravaning odyssey, Don’s response has consistently been, “Do whatever you would do if I weren’t here.”  So it’s decided…we’re going for it.  We’ll move on in that direction with a stop in Kirkham Campground to wait out the two coldest nights.  A stop at the McCall Ranger Station confirms that the campground is still open. 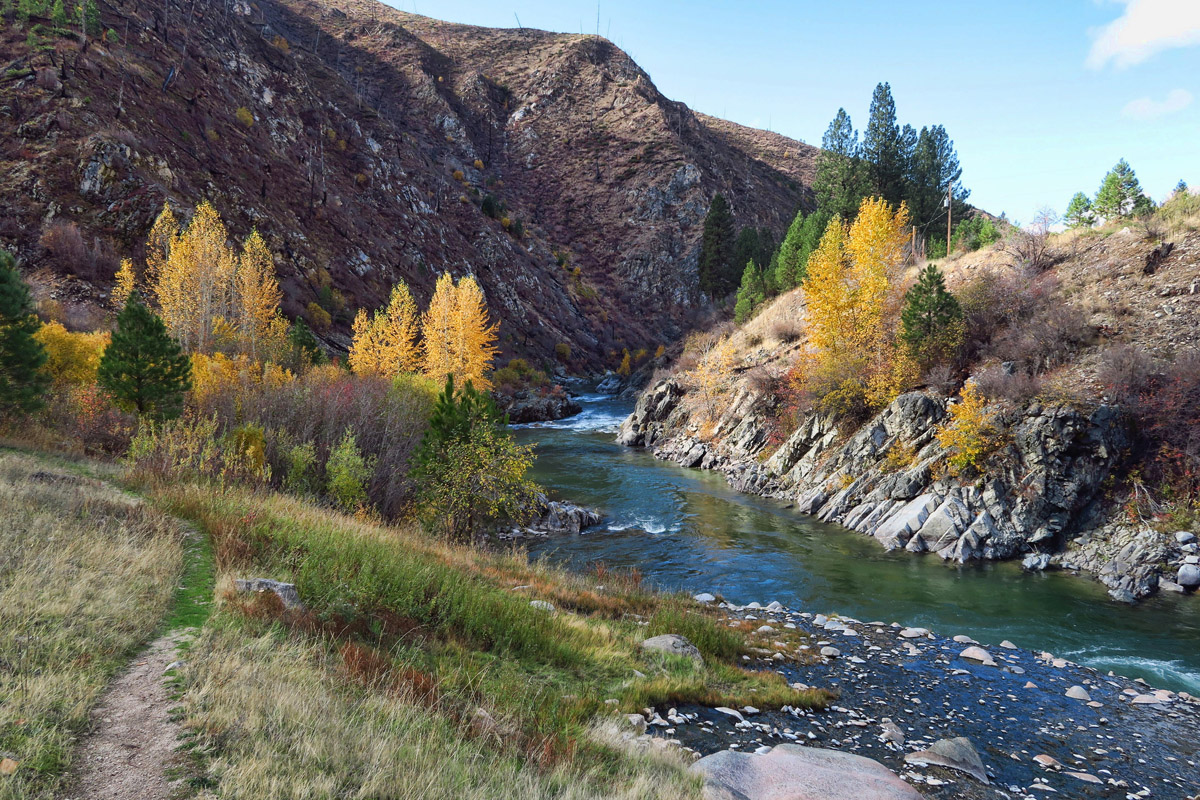 Along the South Fork of the Payette River is Kirkham Hot Springs and Campground. 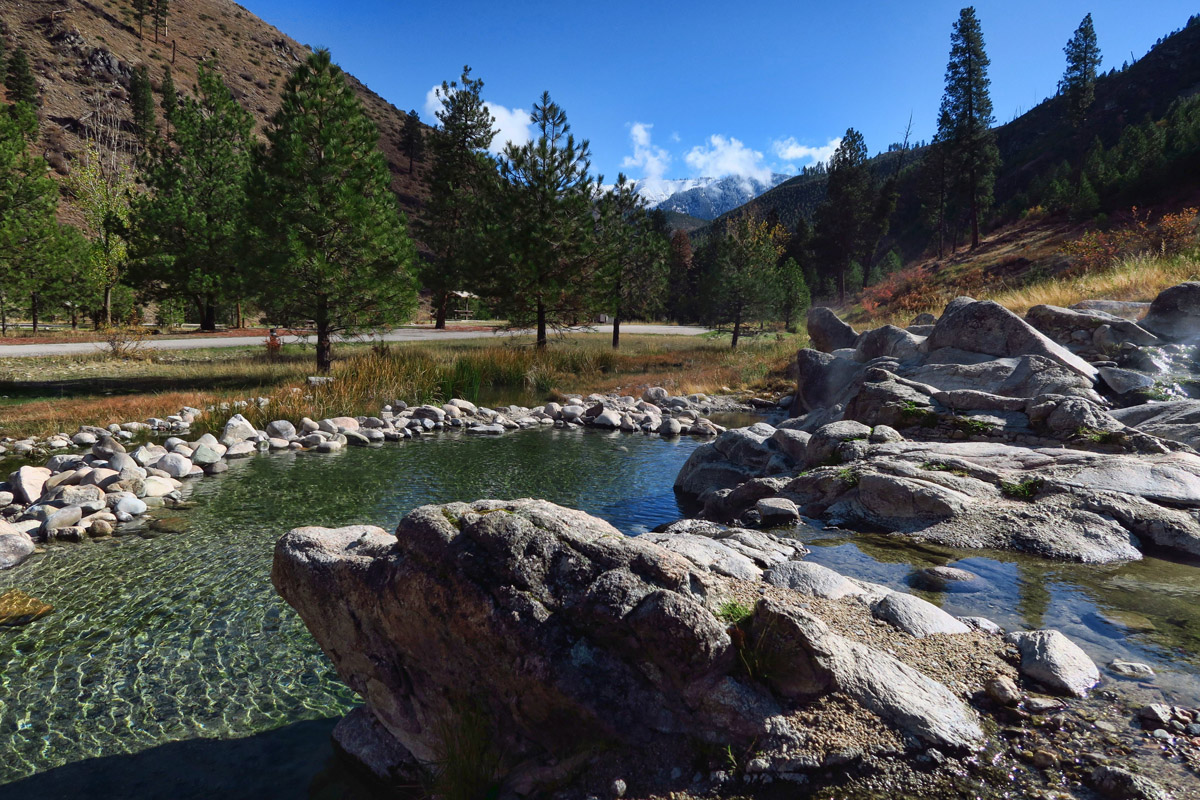 There are upper pools right by the campground, and lower waterfalls. 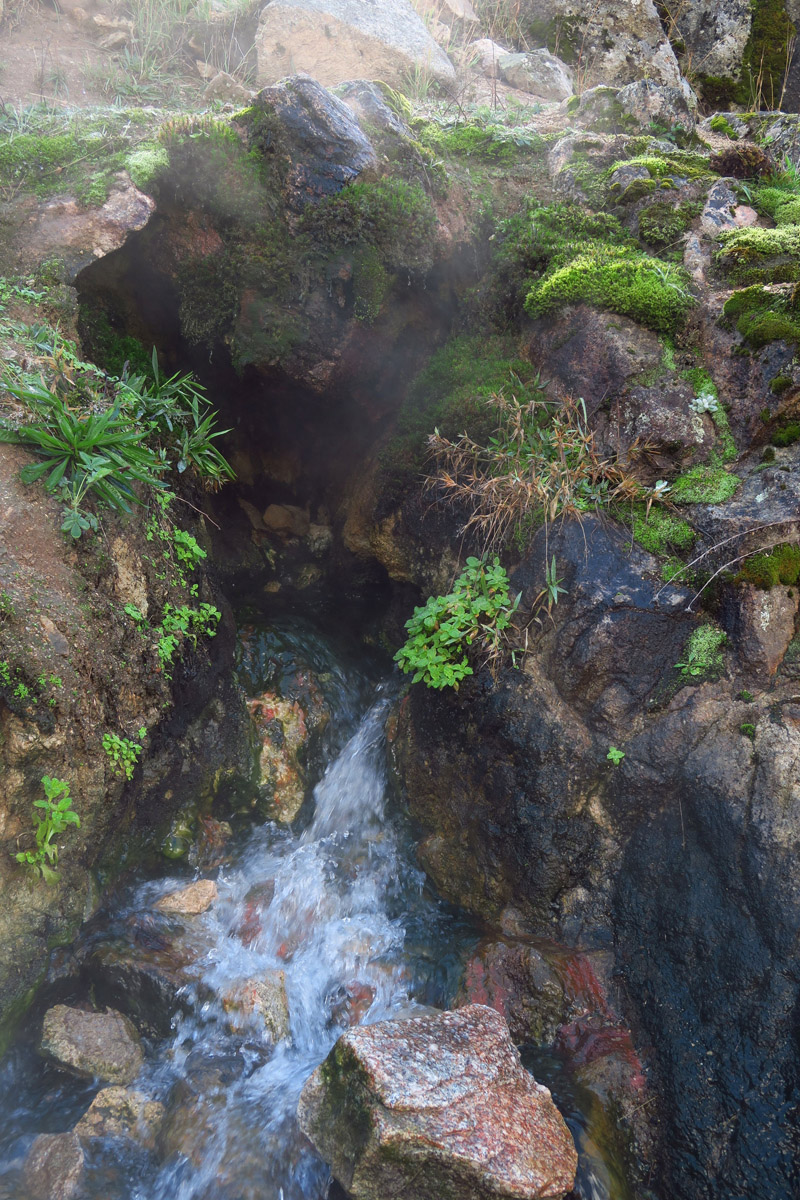 The steaming hot water is shooting out of these five small holes in the ground. It’s possible to walk above them and never cross the water, but below is a cascade… 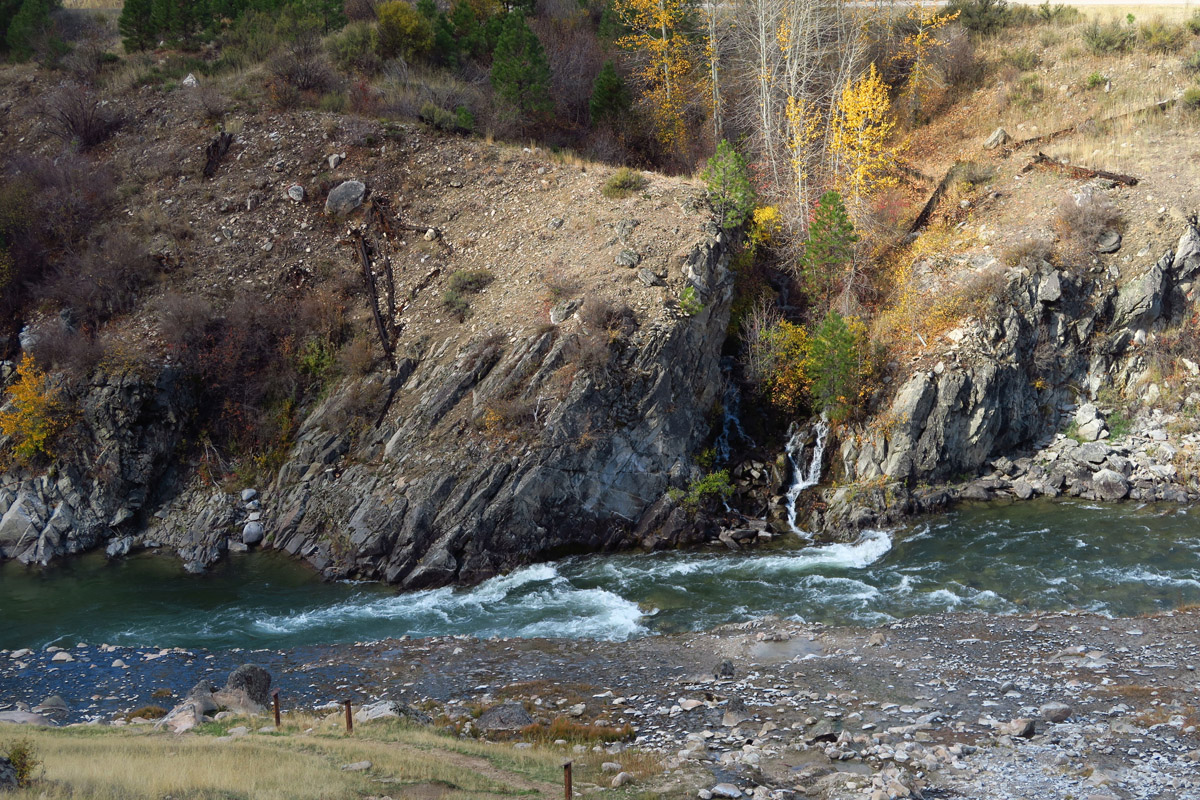 Waterfall across the Payette River. 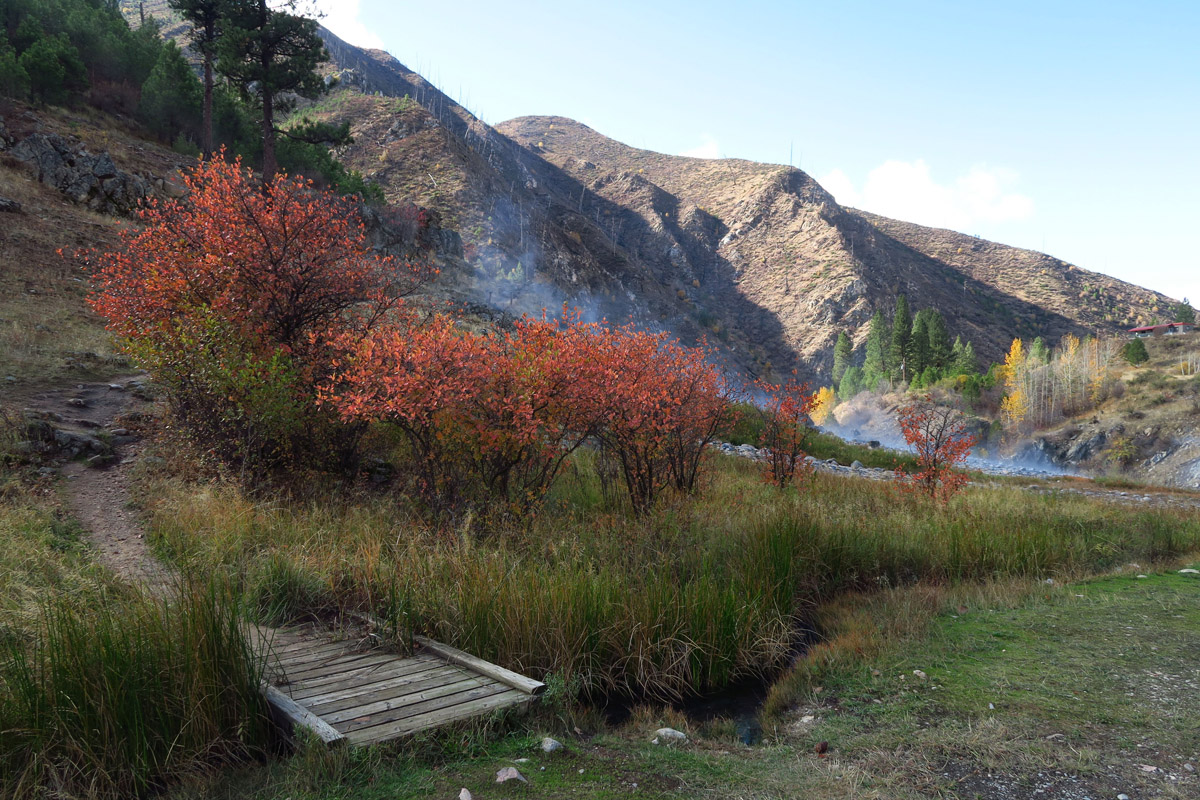 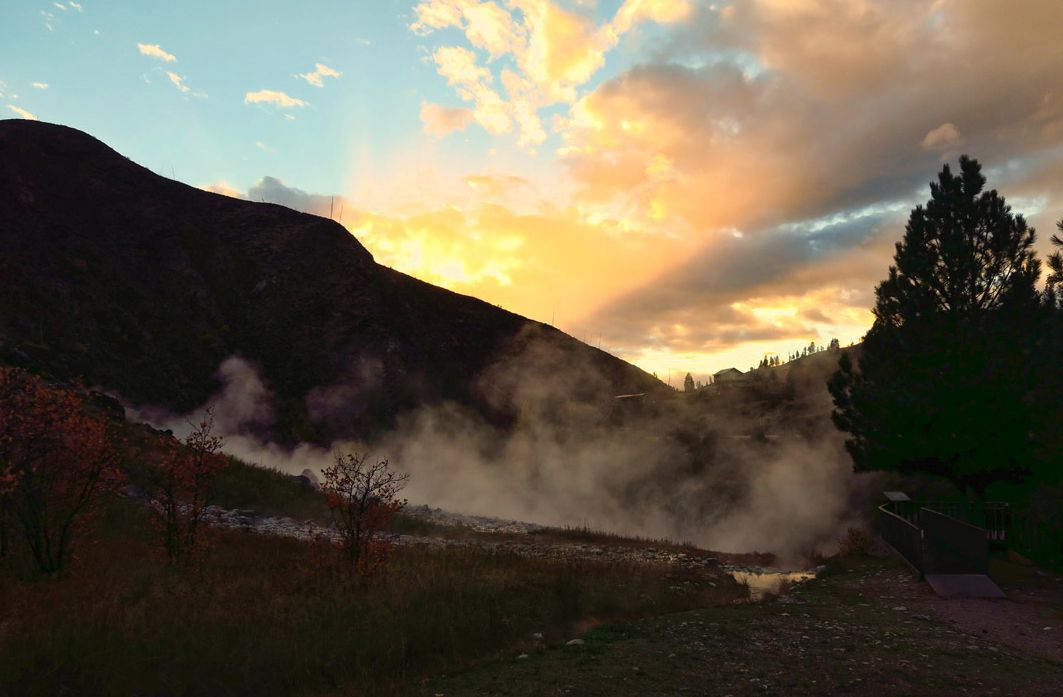 Steam all around seems to keep the temperature from plummeting.

Highway 21 from Lowman to Stanley runs along the South Fork of the Payette River.  This is one of the most prolific locations for hot springs right along the riverbed.  Just down the stairs from the Kirkham Campground is a series of pools and waterfalls  of varying degrees.  The water shoots out of five different springs overhead, cooling down as it cascades over rocks into the river.   There’s no better way to warm the bones than by soaking in a pool of steaming hot water! 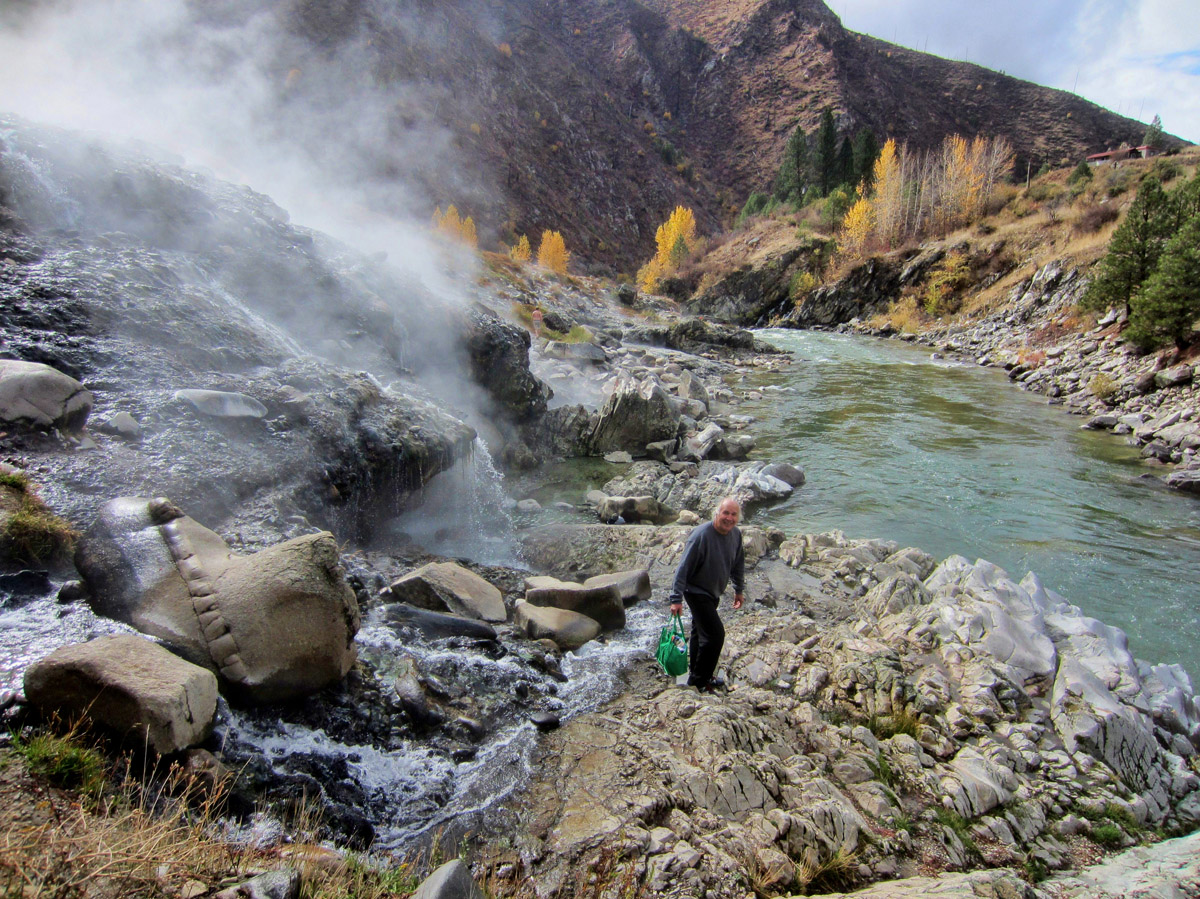 Exploring the pools down below the campground. 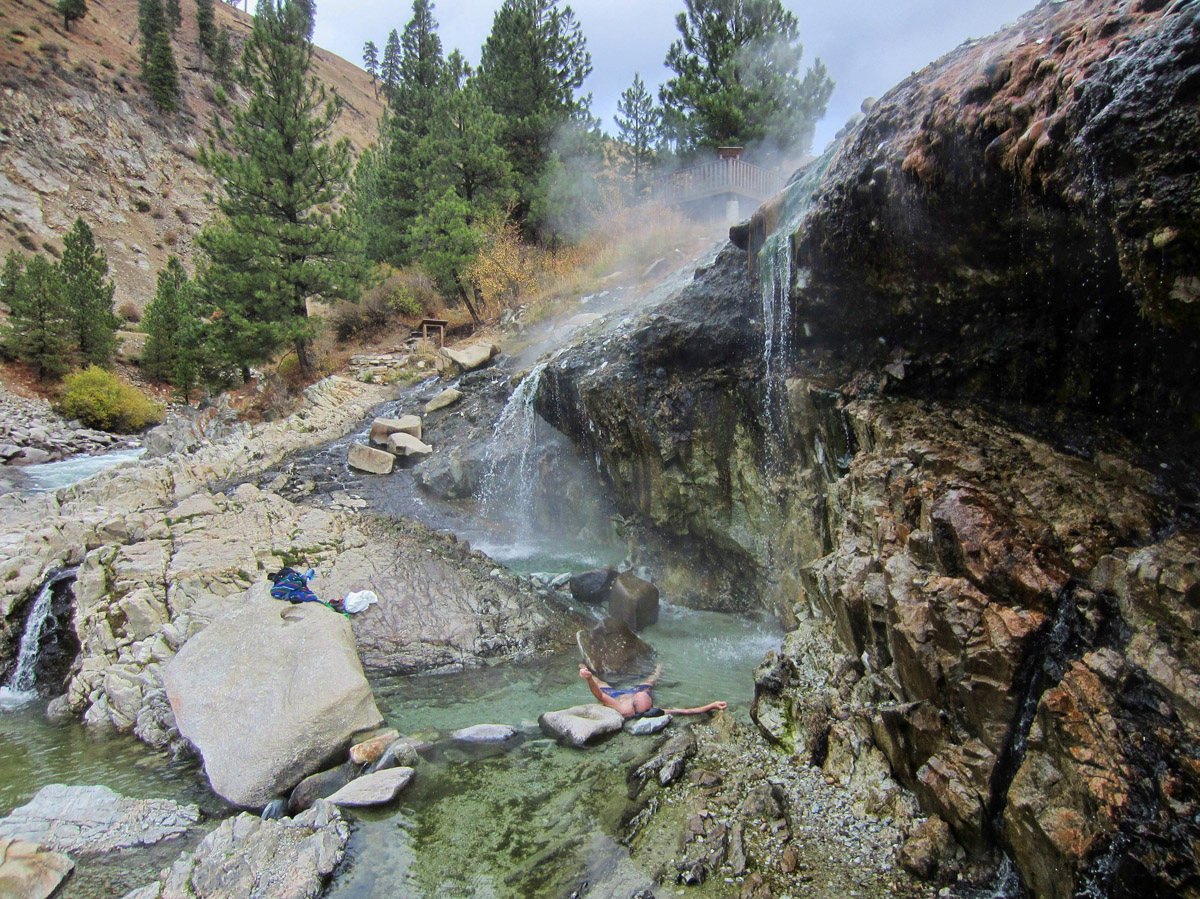 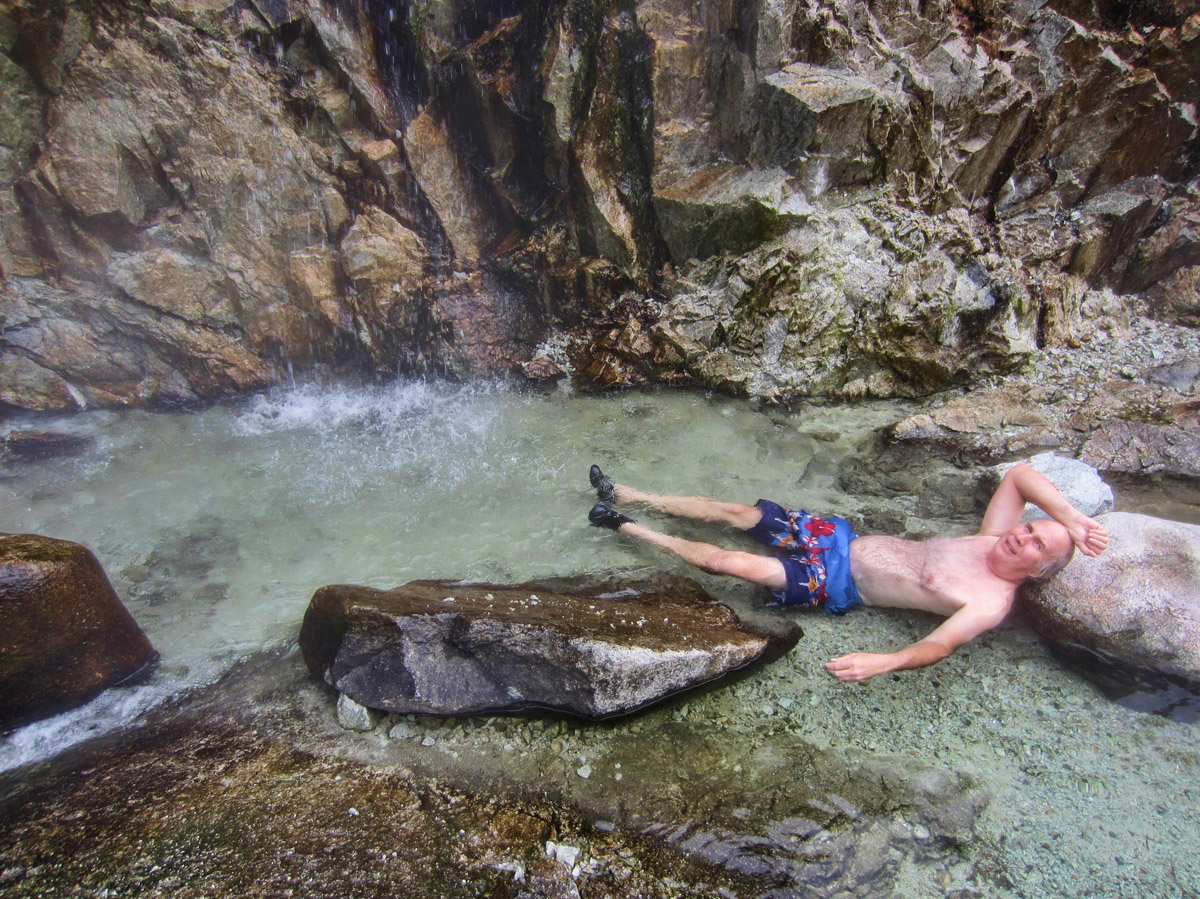 I’ve not seen Don this relaxed since Mexico! 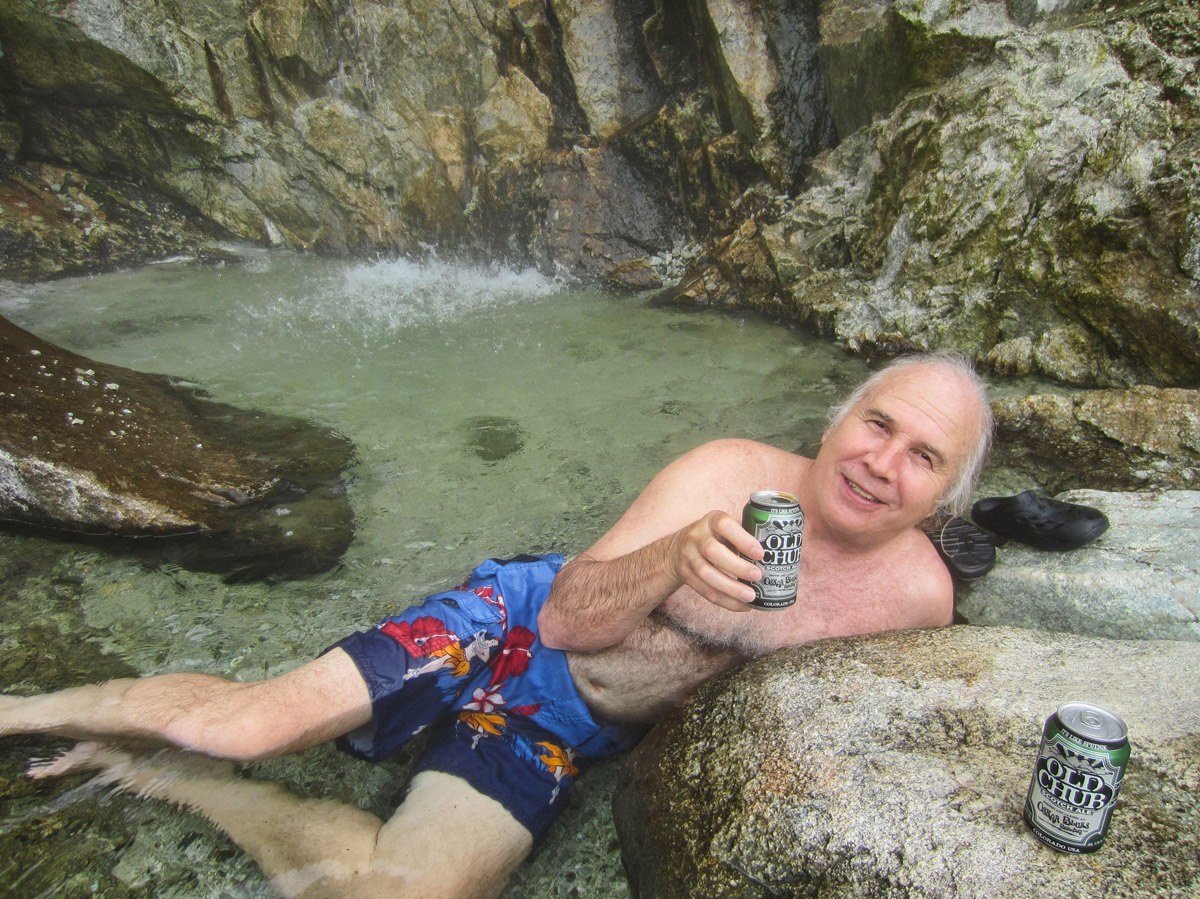 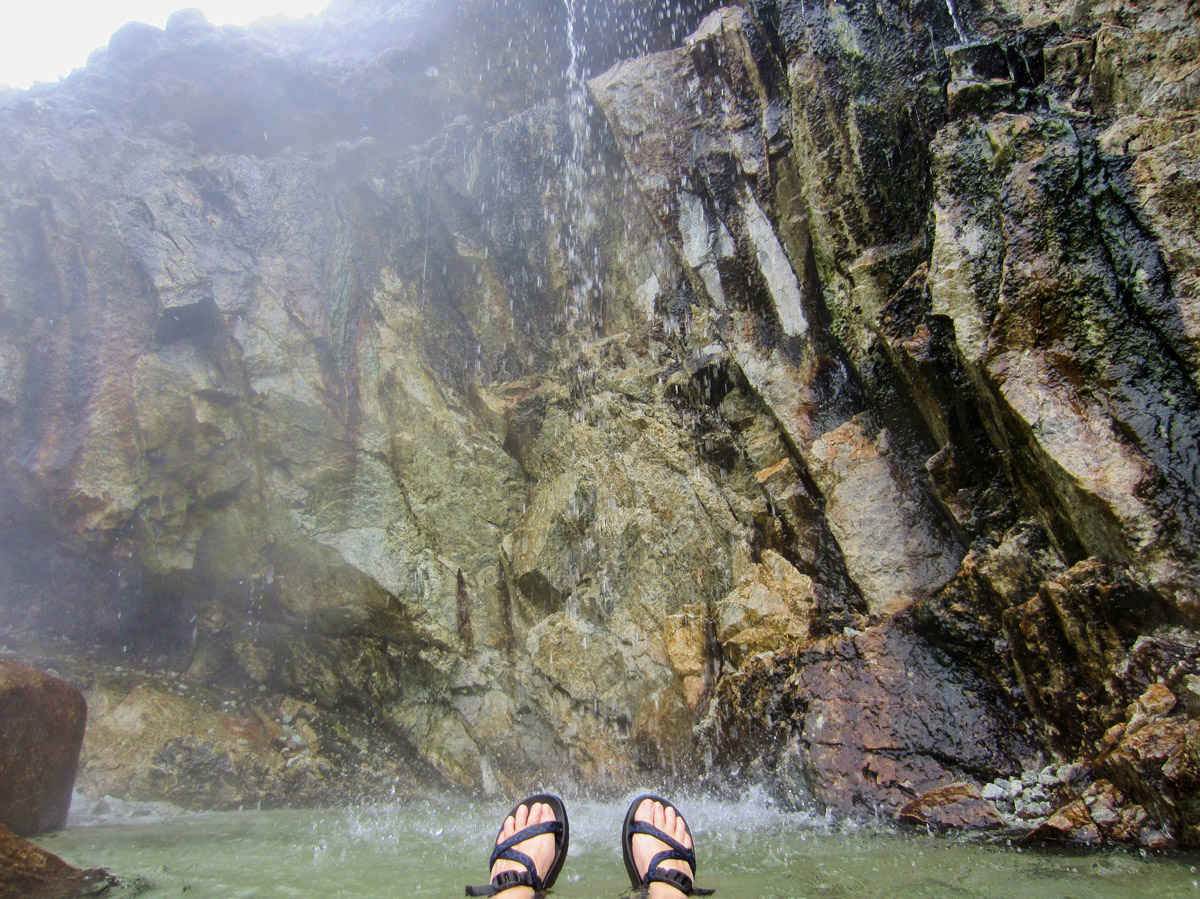 Although the forecast calls for lows in the teens, close proximity to the steaming hot water seems to keep the campground warmer as well.  Even though snow continues to accumulate on the mountains to the east of us, we don’t even get a coating of frost on the windshield. 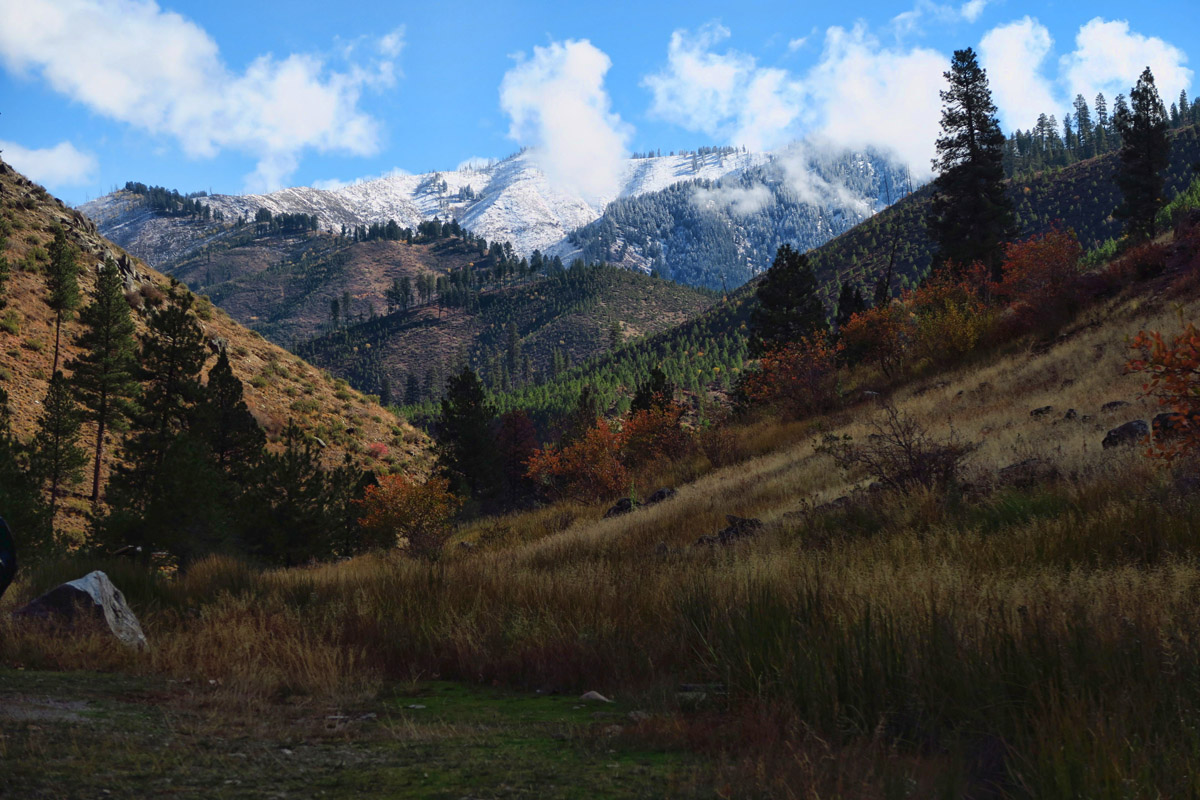 I’ve been watching these mountains for two days. They had no snow when we arrived… 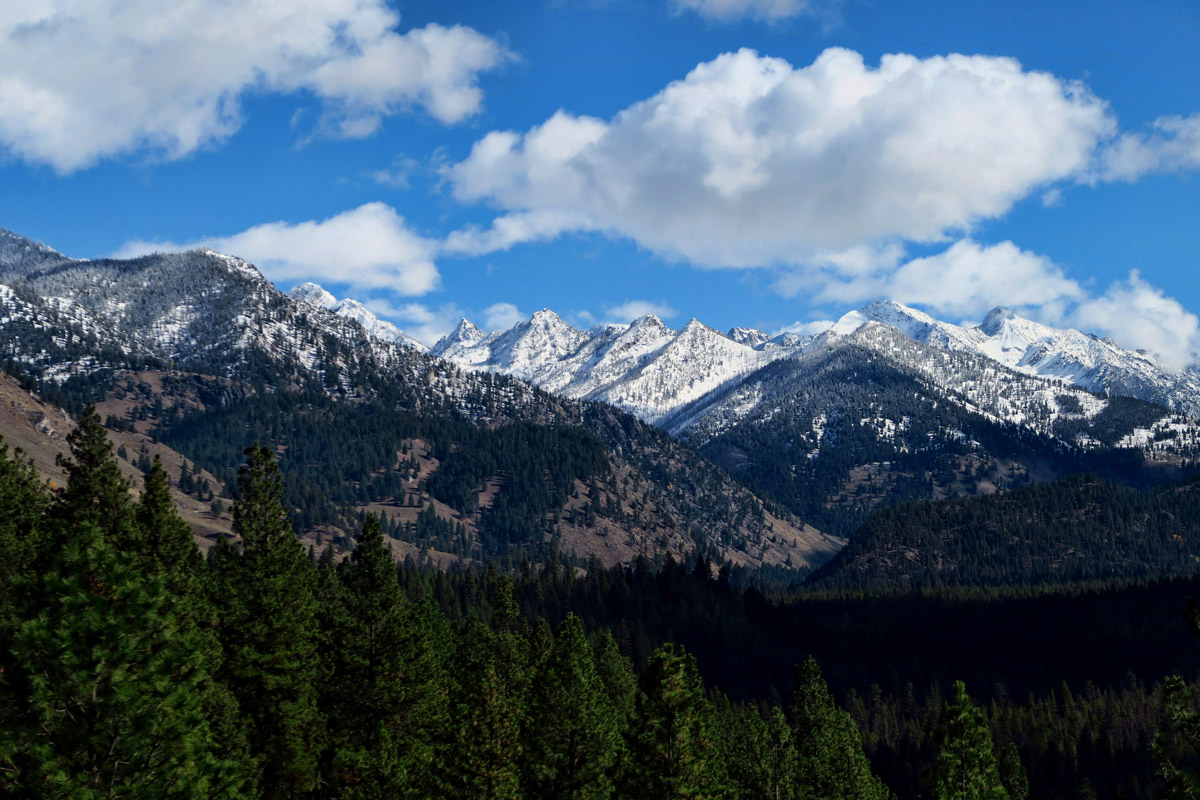 First glimpse of the Sawtooth Range from Grand Jean. 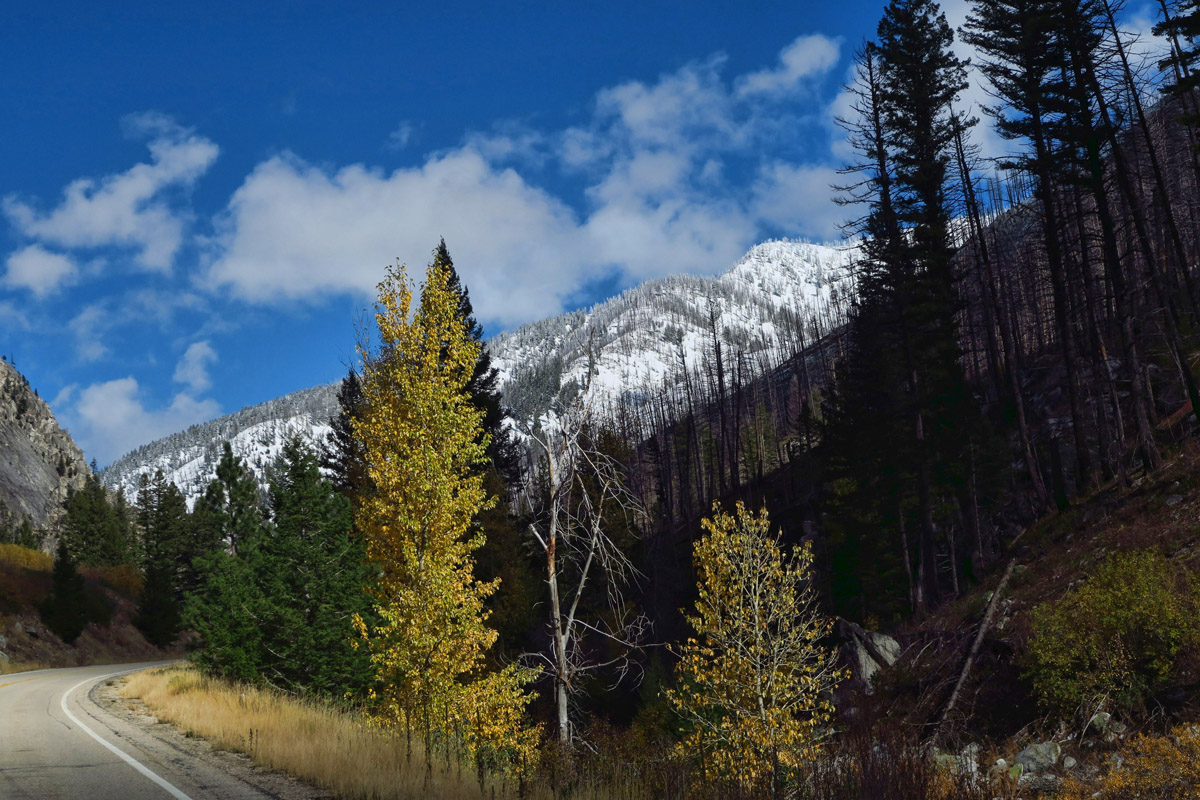 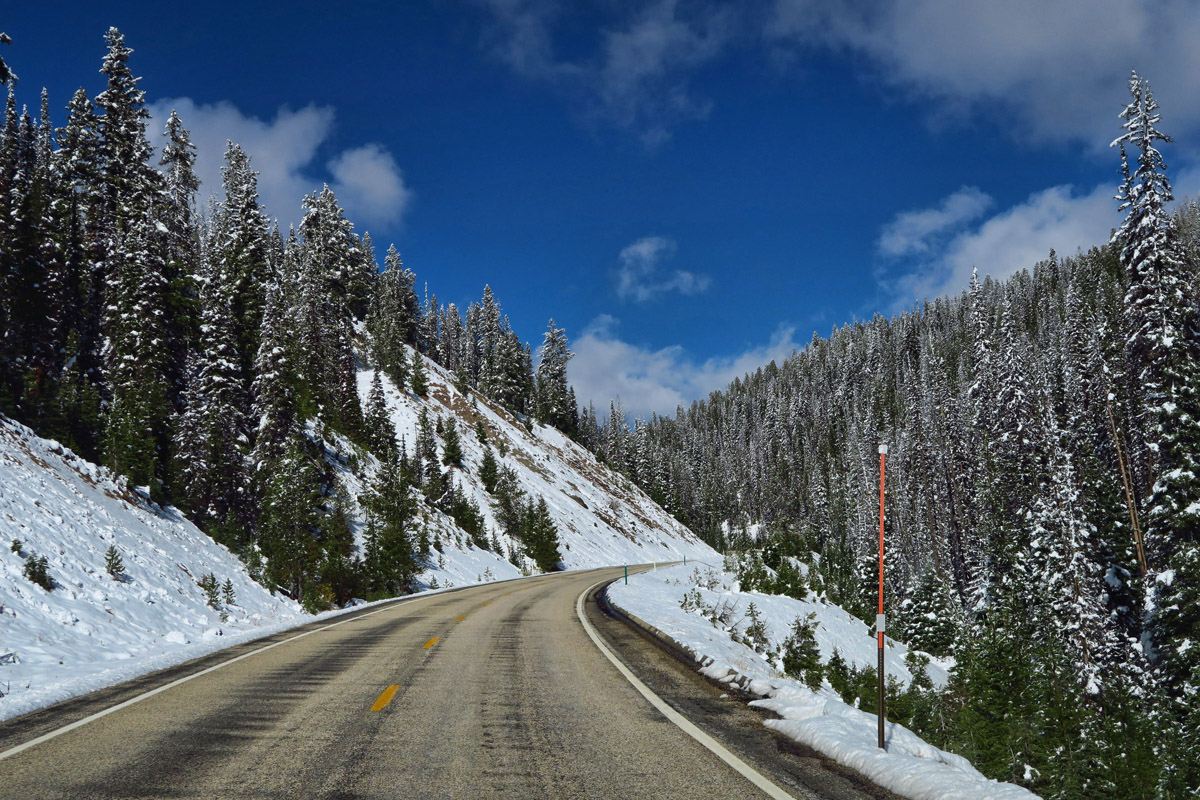 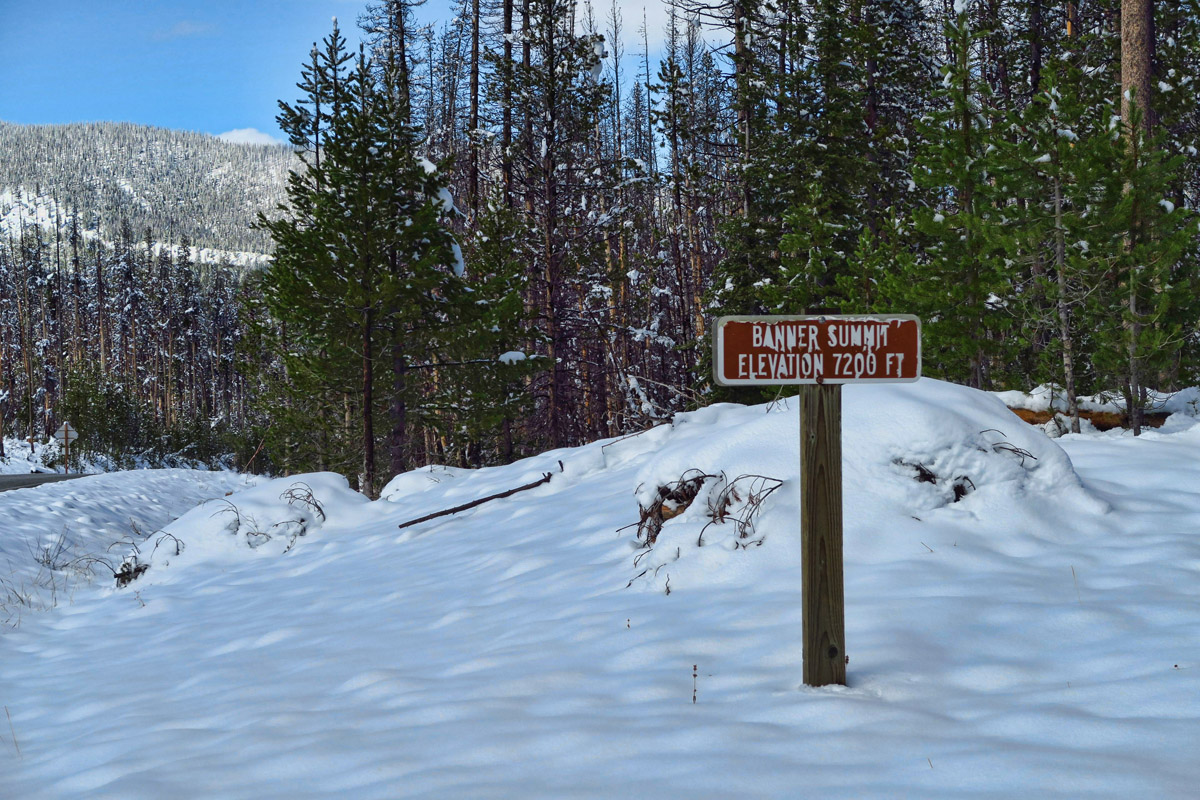 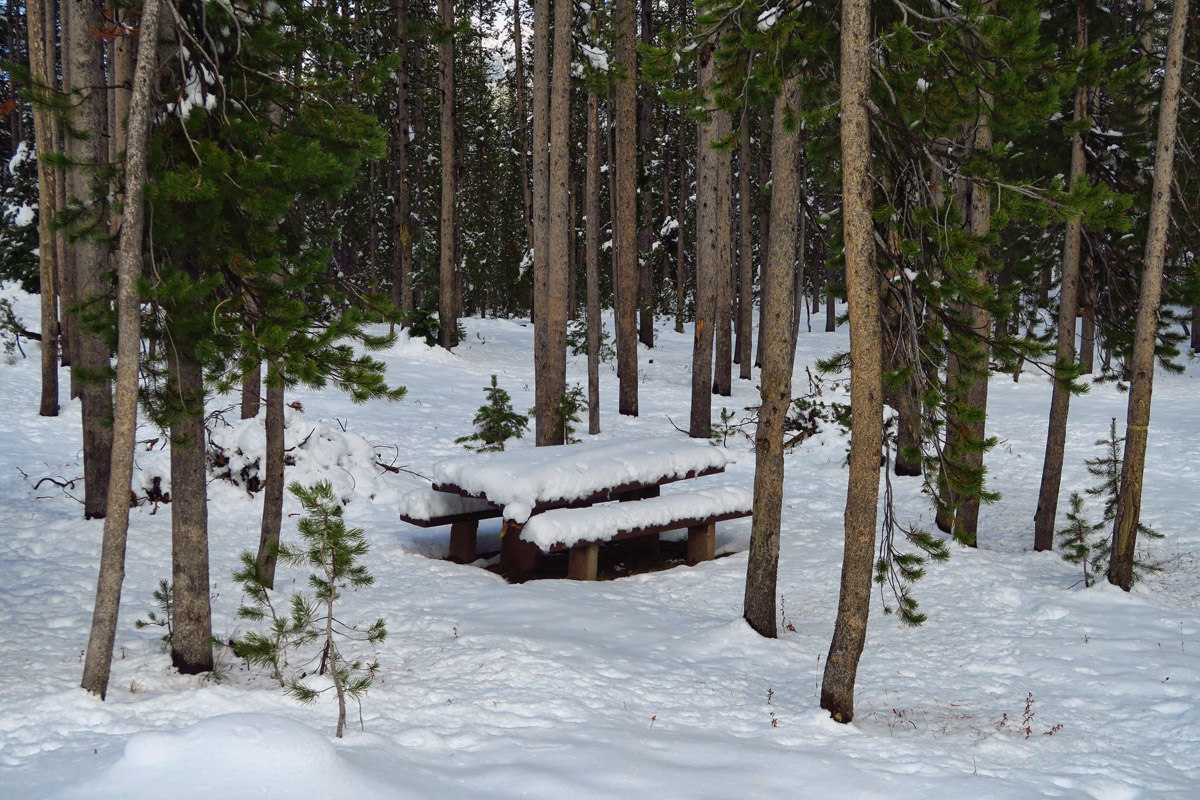 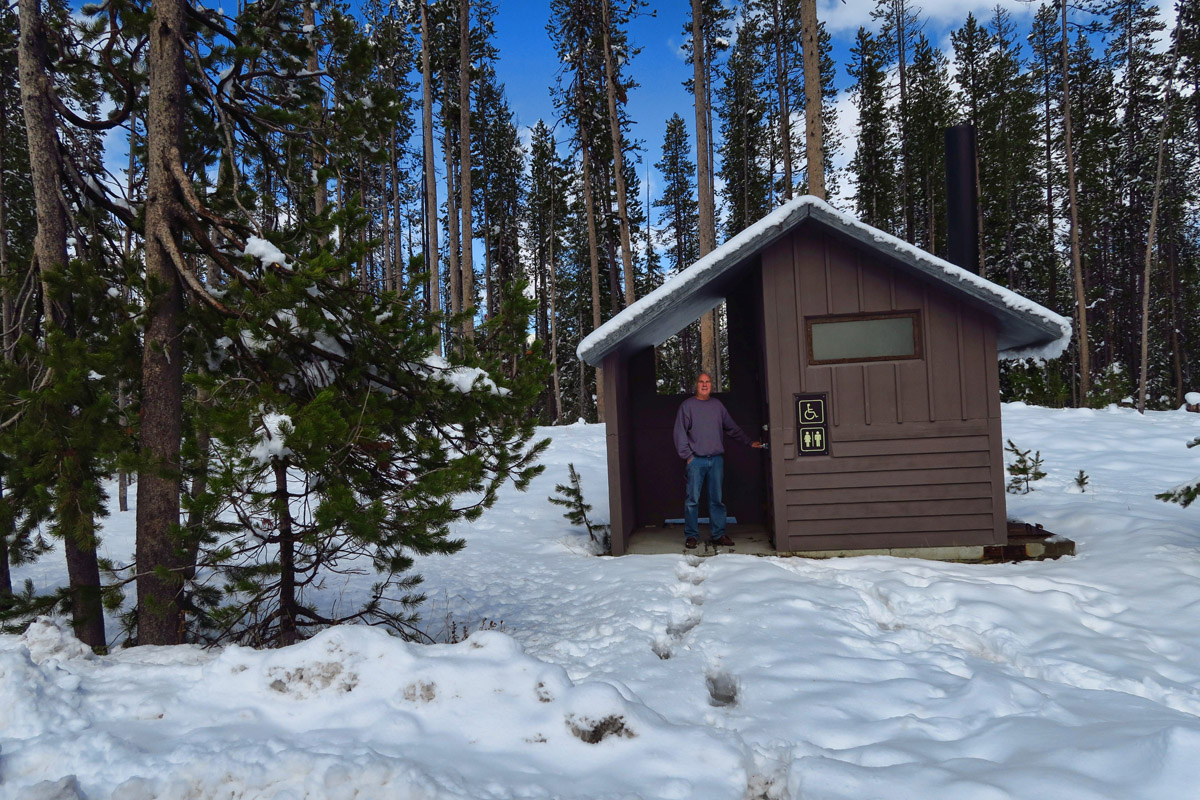 “Neither rain nor sleet nor snow…” 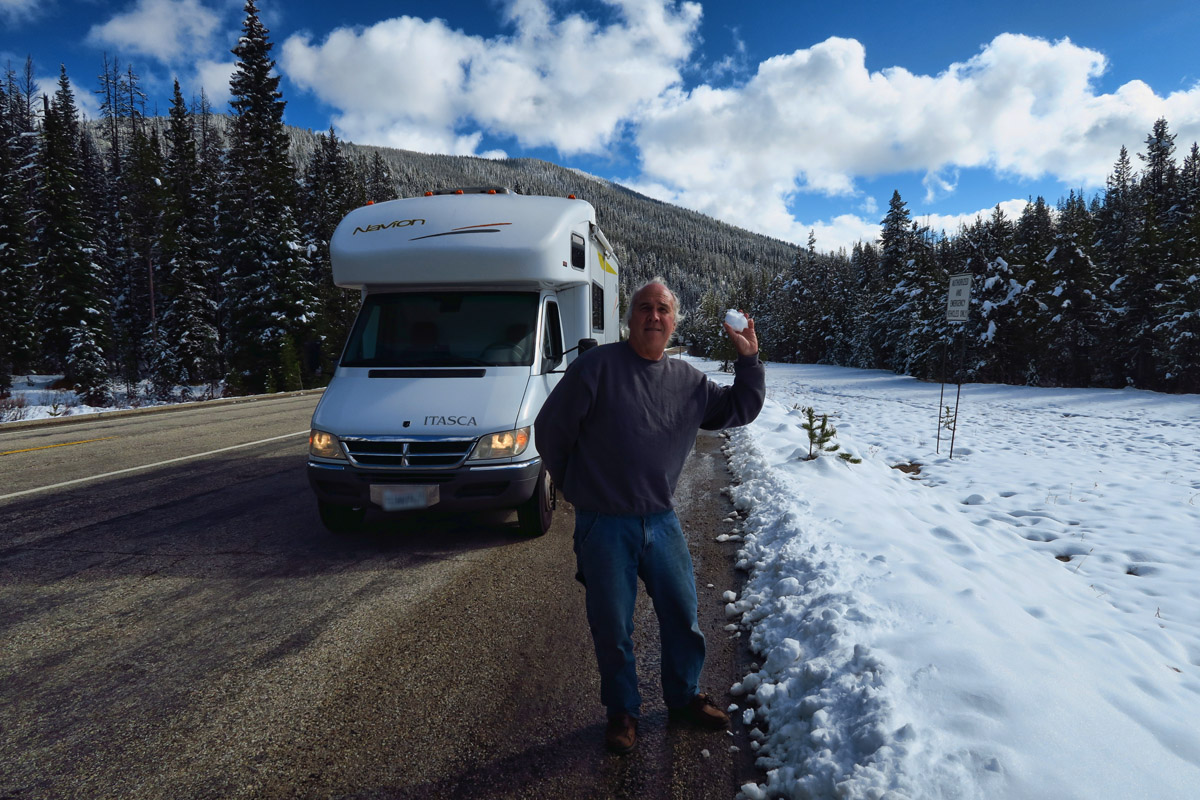 What’s any snowfall without a sibling snowball fight? Yes, this one is staged, but only after I nailed him! 😉 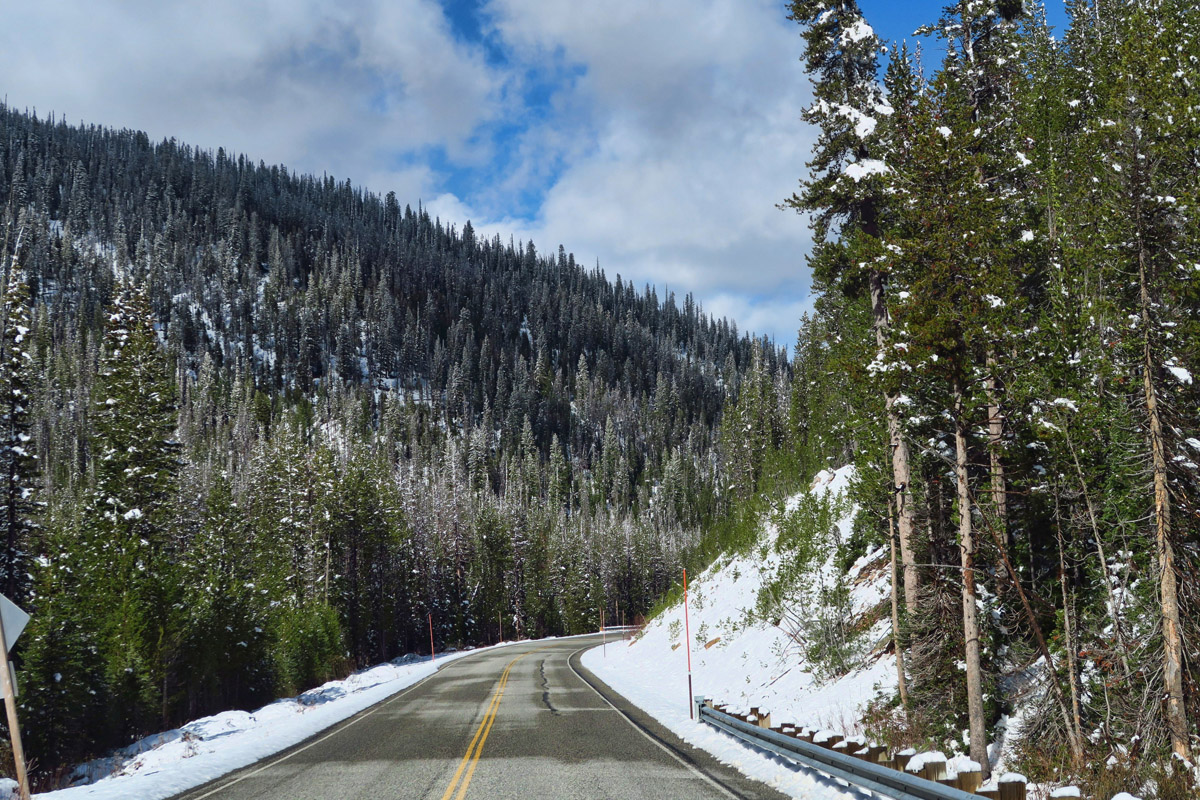 It would be two nights before the rain was out of the forecast.  The sun wakes me up streaming through the window as I hear the sound of trucks rumbling down from the pass.  It would appear the roads are clear enough to navigate the Banner Summit pass on to Stanley… 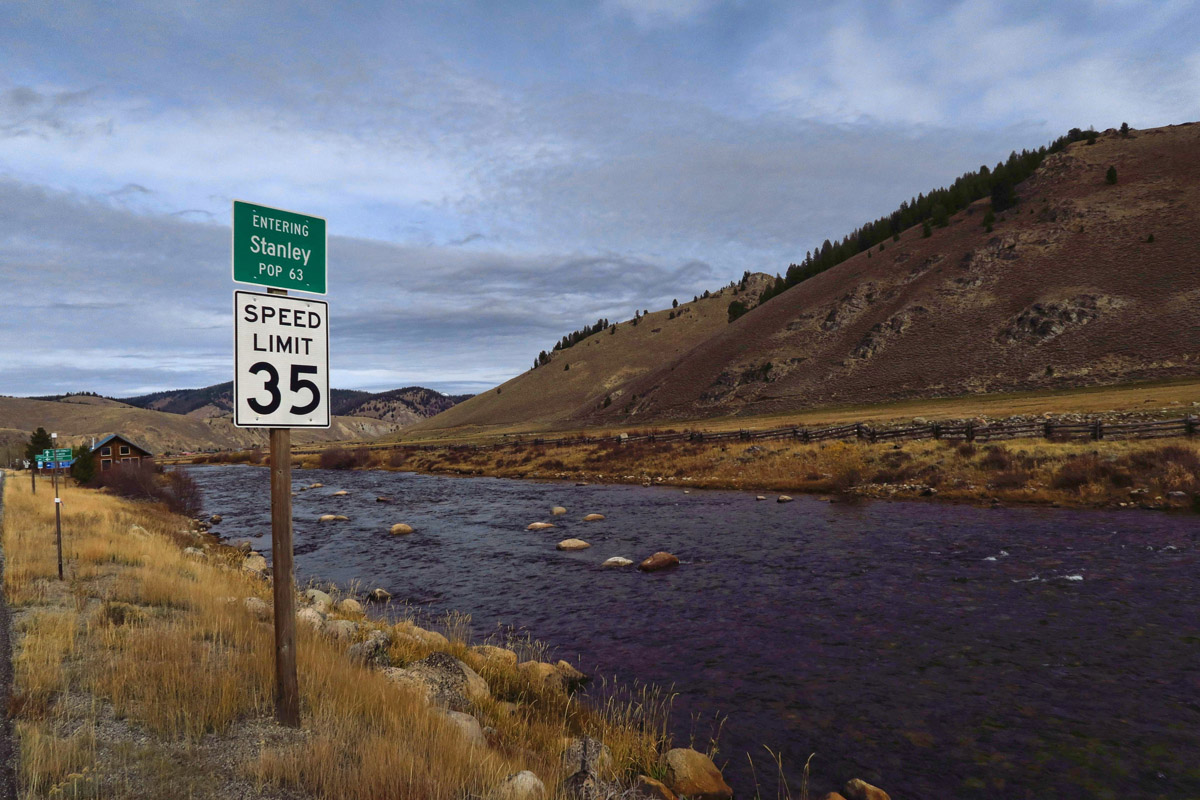 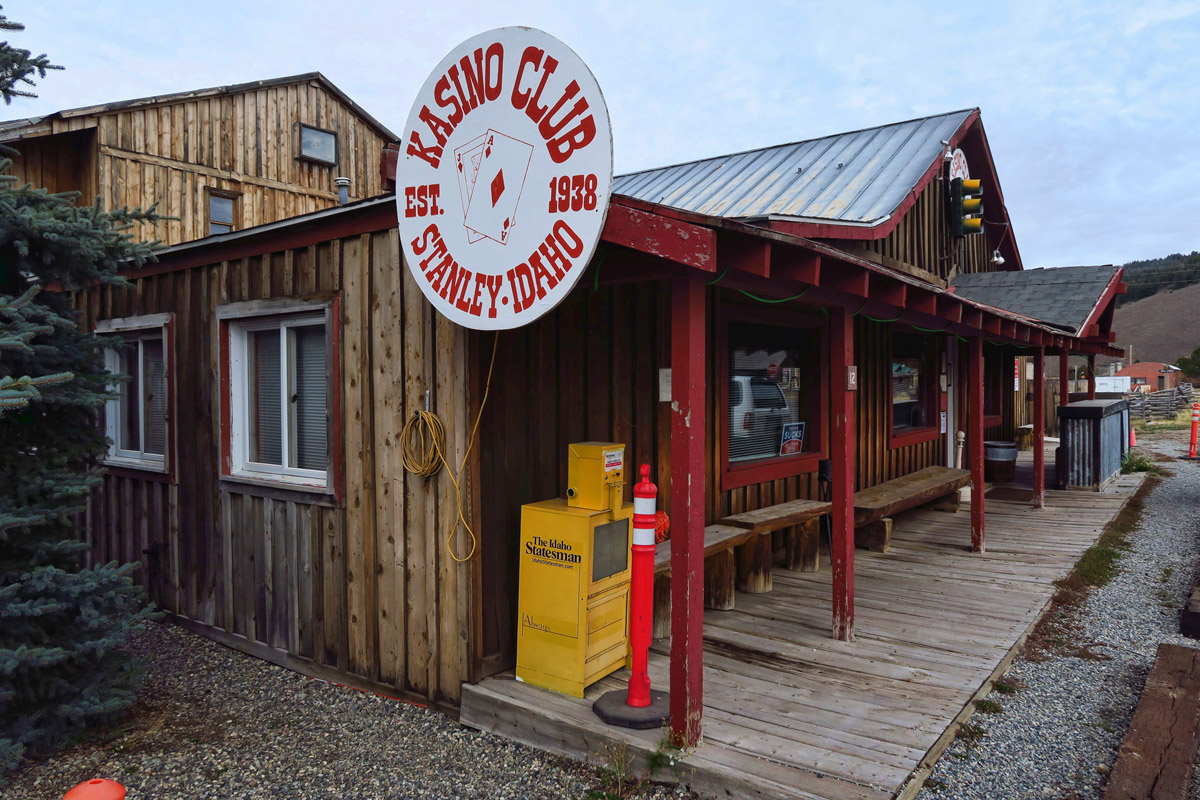 Downtown Stanley, just as quirky as I hoped you would be! 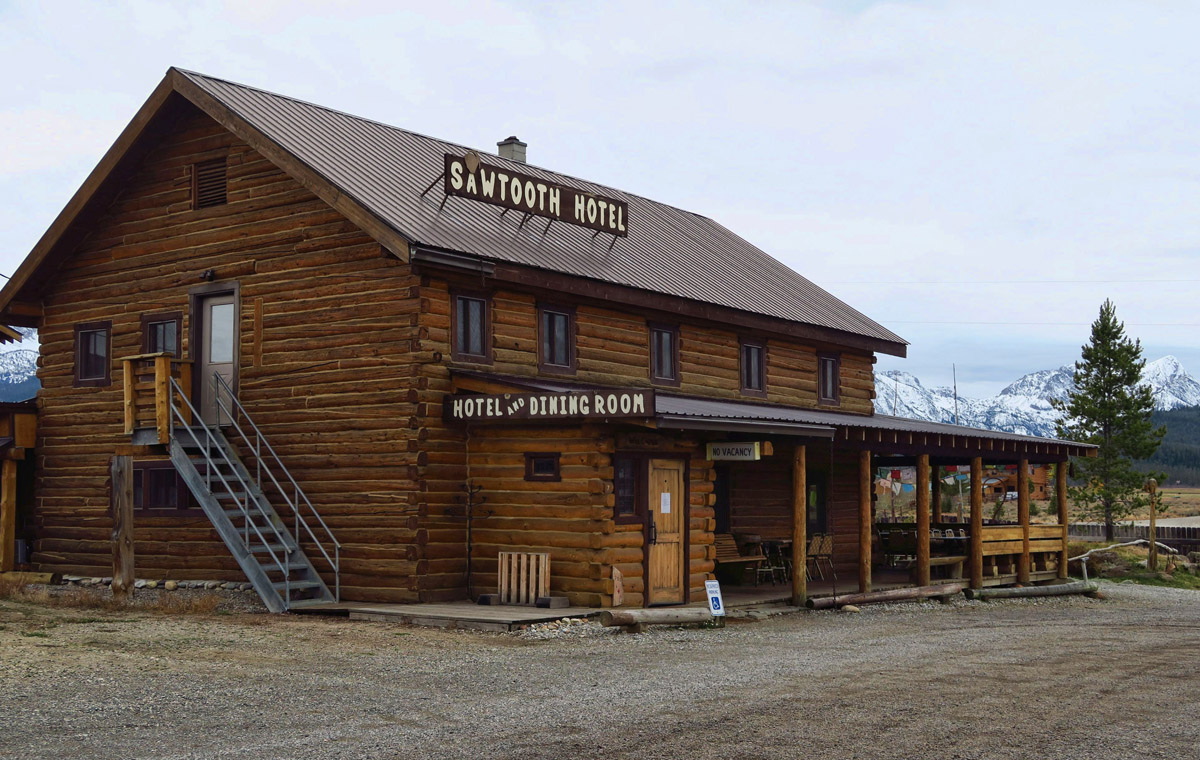 This appears to be a great music venue, though closed for the season now. 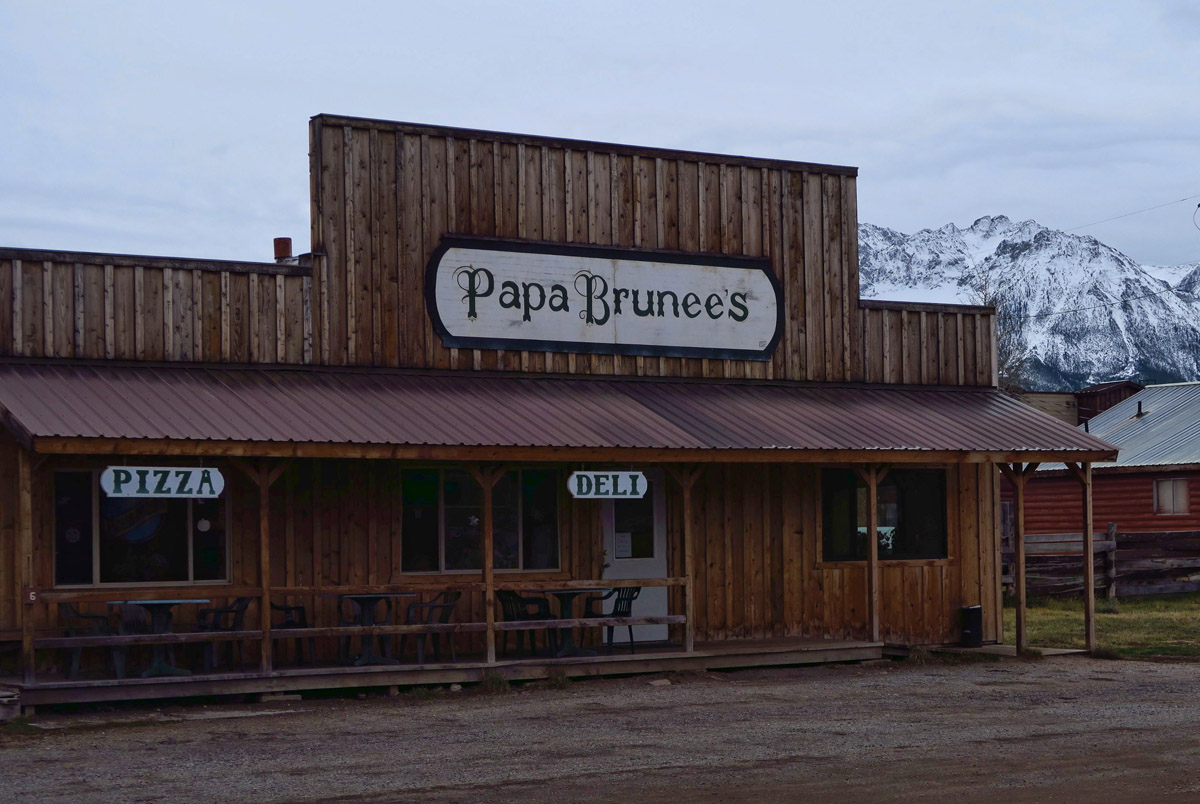 The only restaurant in town still open… 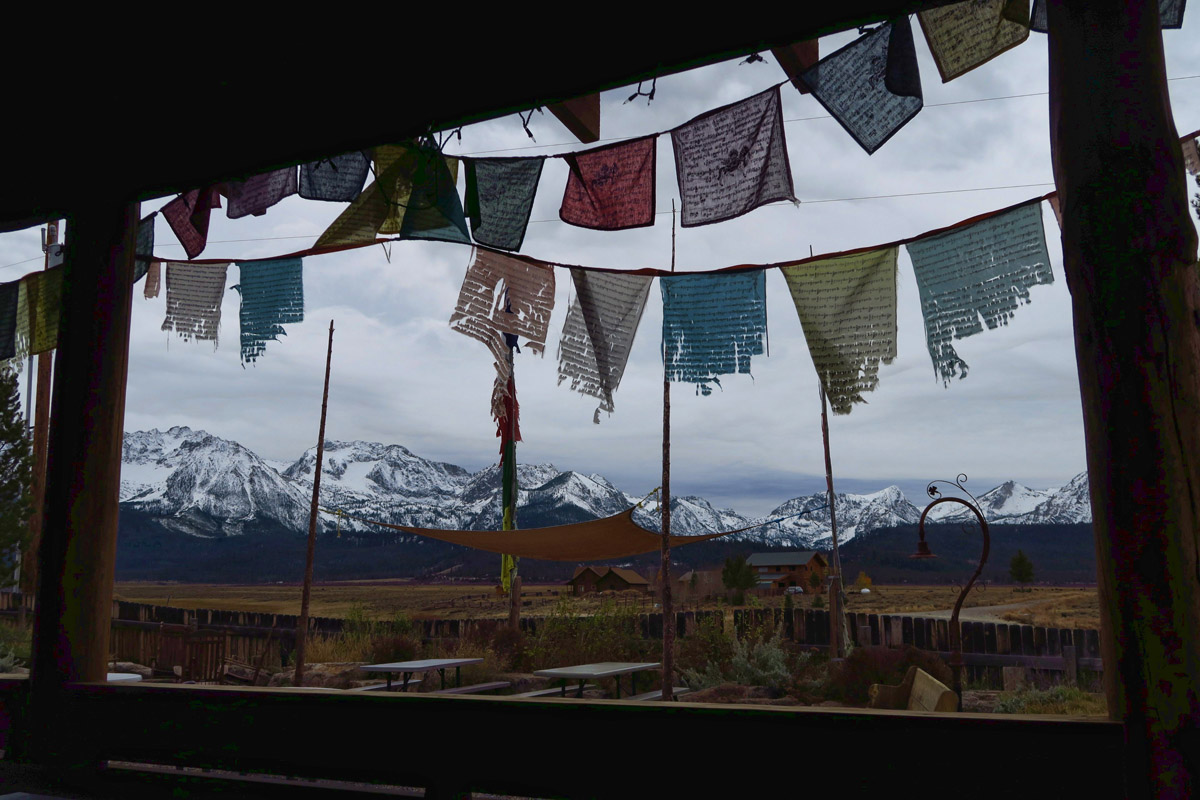 Tibetan Prayer Flags off the patio of the Stanley Hotel. 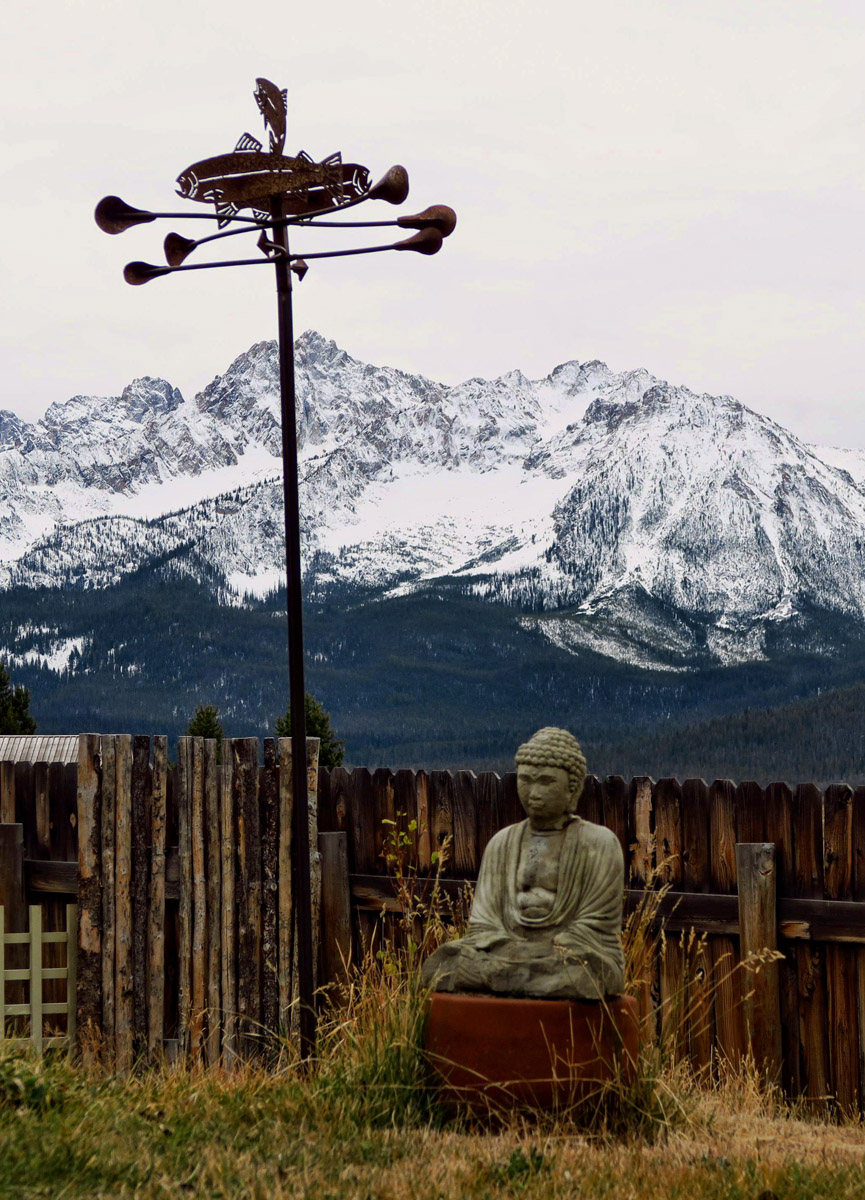 Yep. this could be Tibet, if only it were a different version of Buddha.