Even though I set my intentions to see “all new things” on my southerly migration this year, there are a few favorite stops that I just can’t bypass, one of which is my favorite state park in the little Snow Canyon just outside of St. George, Utah.

I first visited Snow Canyon while staying at the Red Mountain Resort back in 2006 for Thanksgiving weekend as a “spa getaway.”   I took several of the guided hikes from the resort which sits at the gateway to the state park.  It was my first experience ever hiking slick rock, and my first time to ever hear “trust your shoes.”   I can still remember pointing my toes down the petrified dunes for the first time, expecting to slide but instead feeling like I had little suction cups on the bottom of my shoes.  I hiked all over those dunes feeling like I was Spiderwoman.

Since that time, I’ve returned to Snow Canyon every time I am within close proximity.  It has always been a “happy place” for me.  A place that feels sunny but refreshingly brisk.  Intimate yet expansive.  Adventurous yet safe.   I never tire of roaming over those giant slickrock dunes. 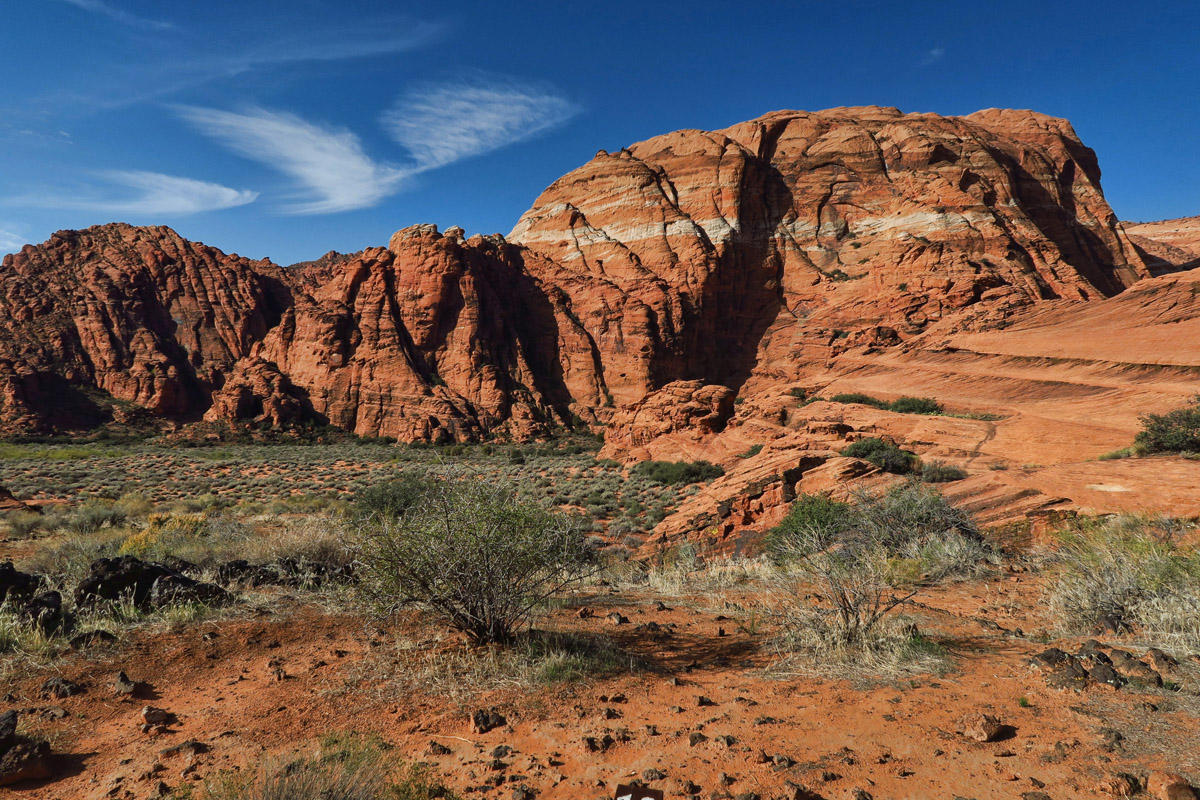 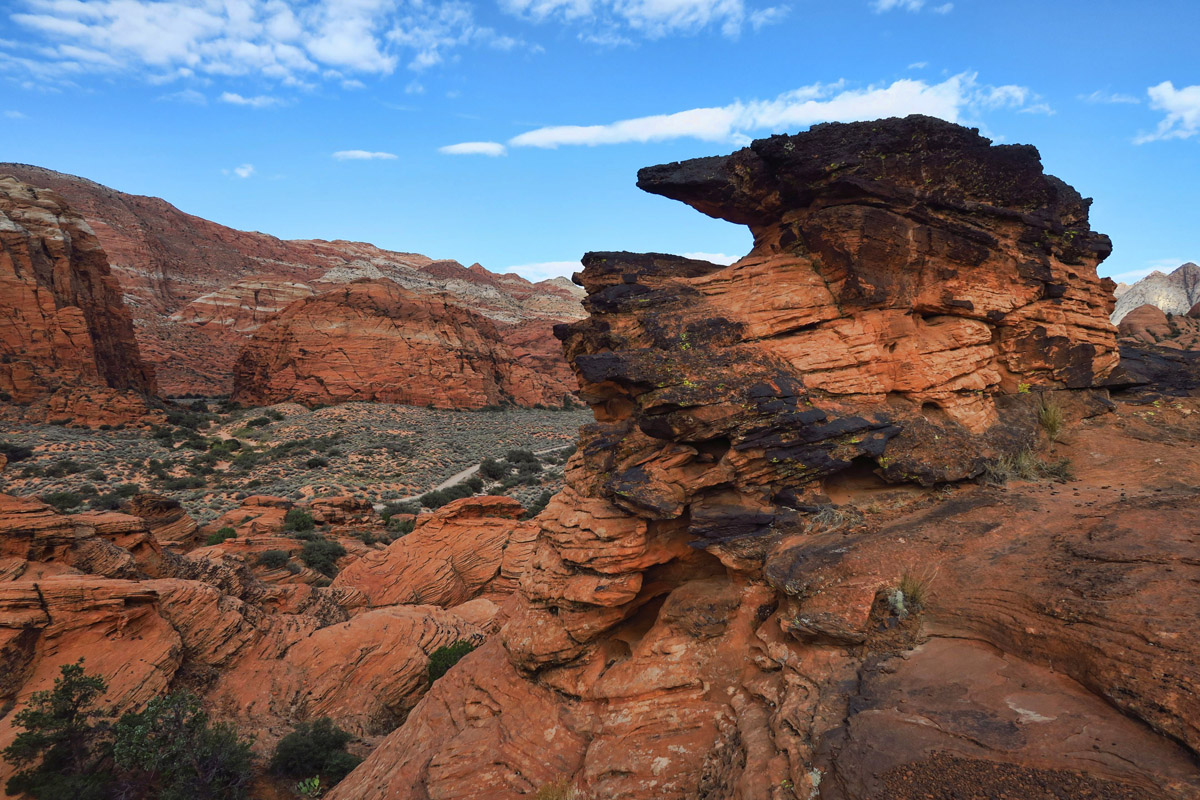 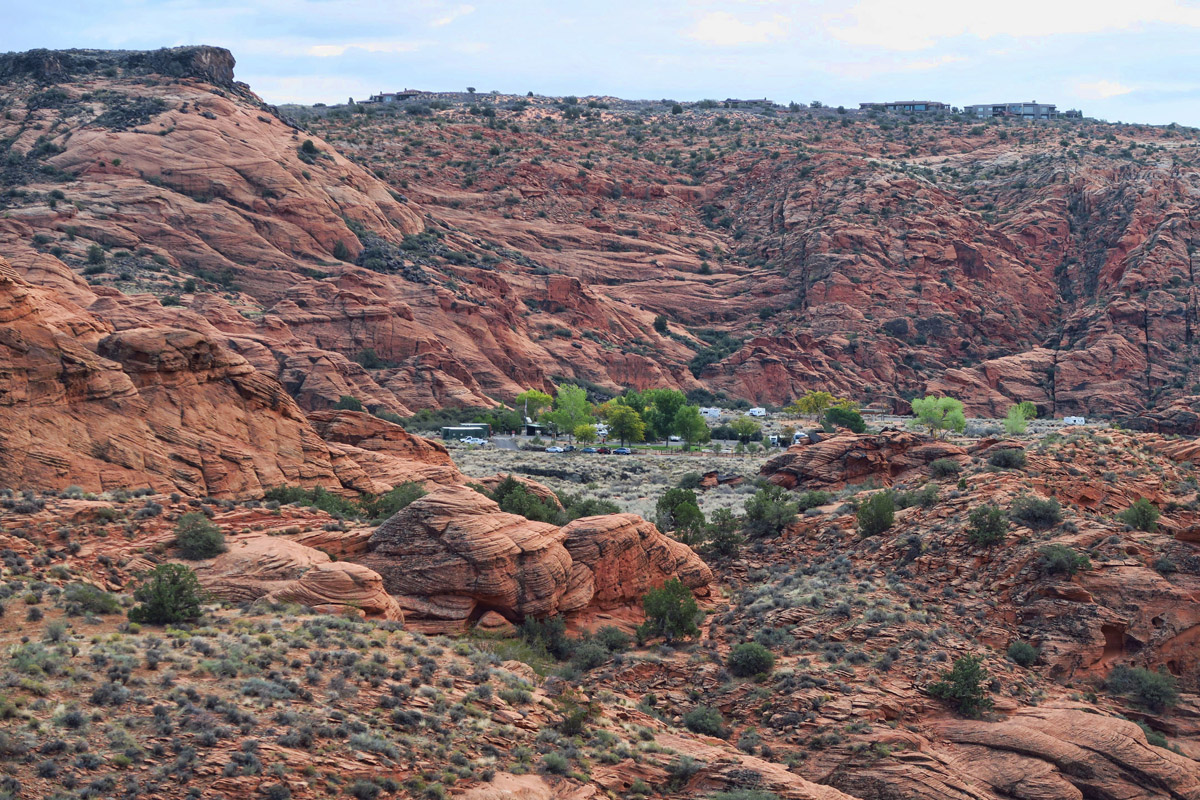 Looking down into the campground in Snow Canyon State Park.

This is now my fifth visit to the little Snow Canyon, so I vow “no photos” this time. I am just going to take in the warmth and beauty of the red rocks via osmosis as opposed to behind the lens of the camera. I plan to soak up the other senses…the gritty feel of the sandstone as I sit and bask. The cascading musical notes of the Canyon Wren as its melody trills across the echoing canyon walls. The smell of the pinyon pine as the sun heats up the resin in the bark. I have four years of the same photos, though. So no pictures this time… 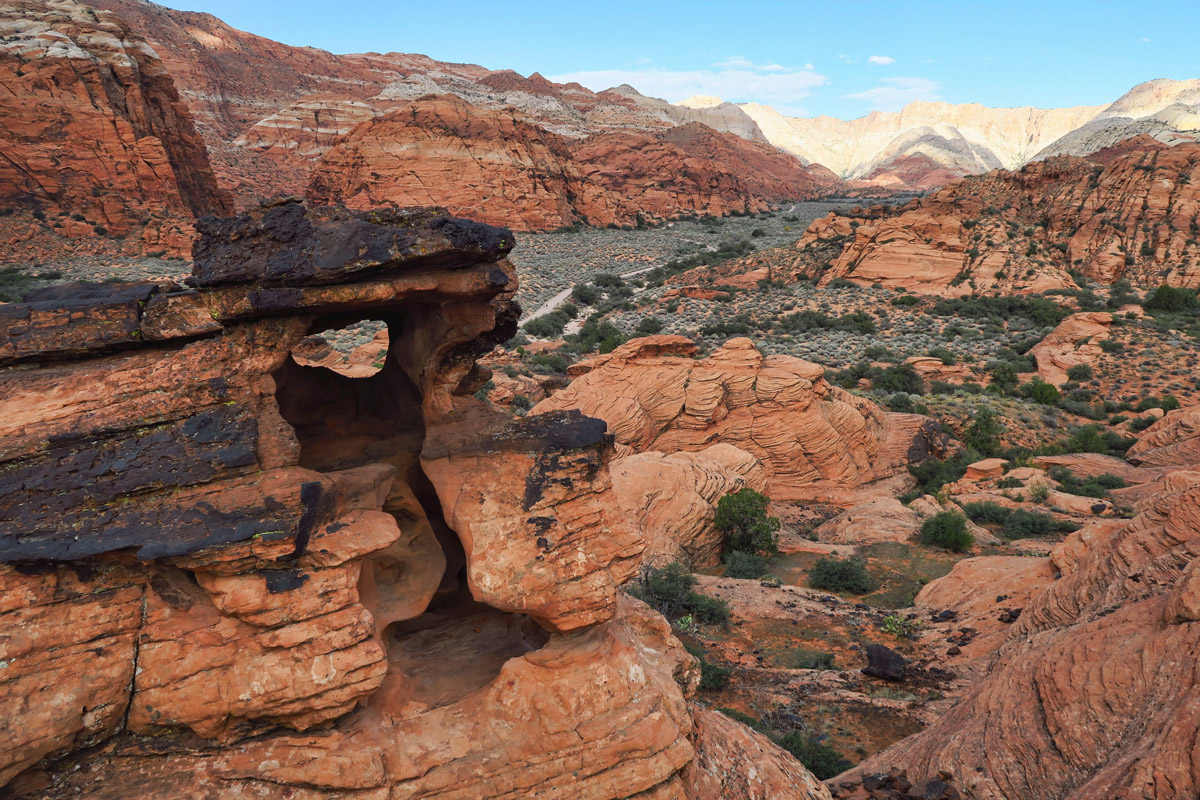 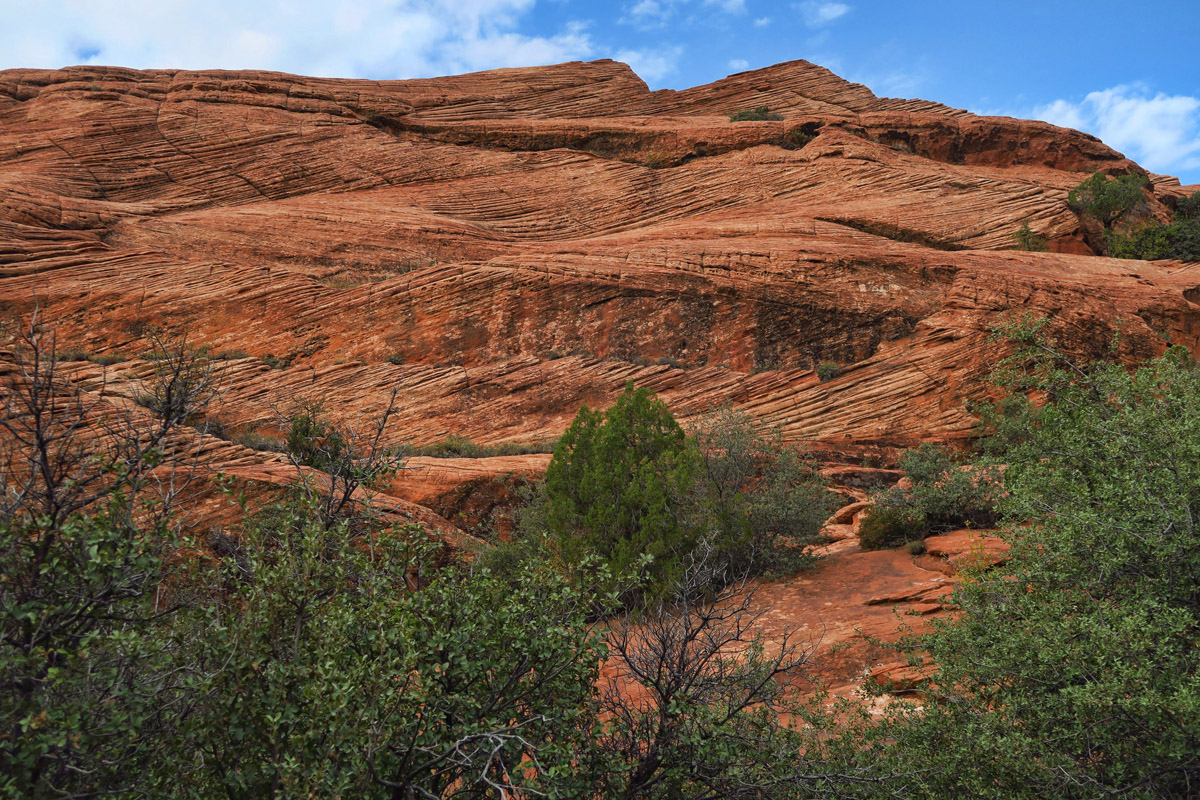 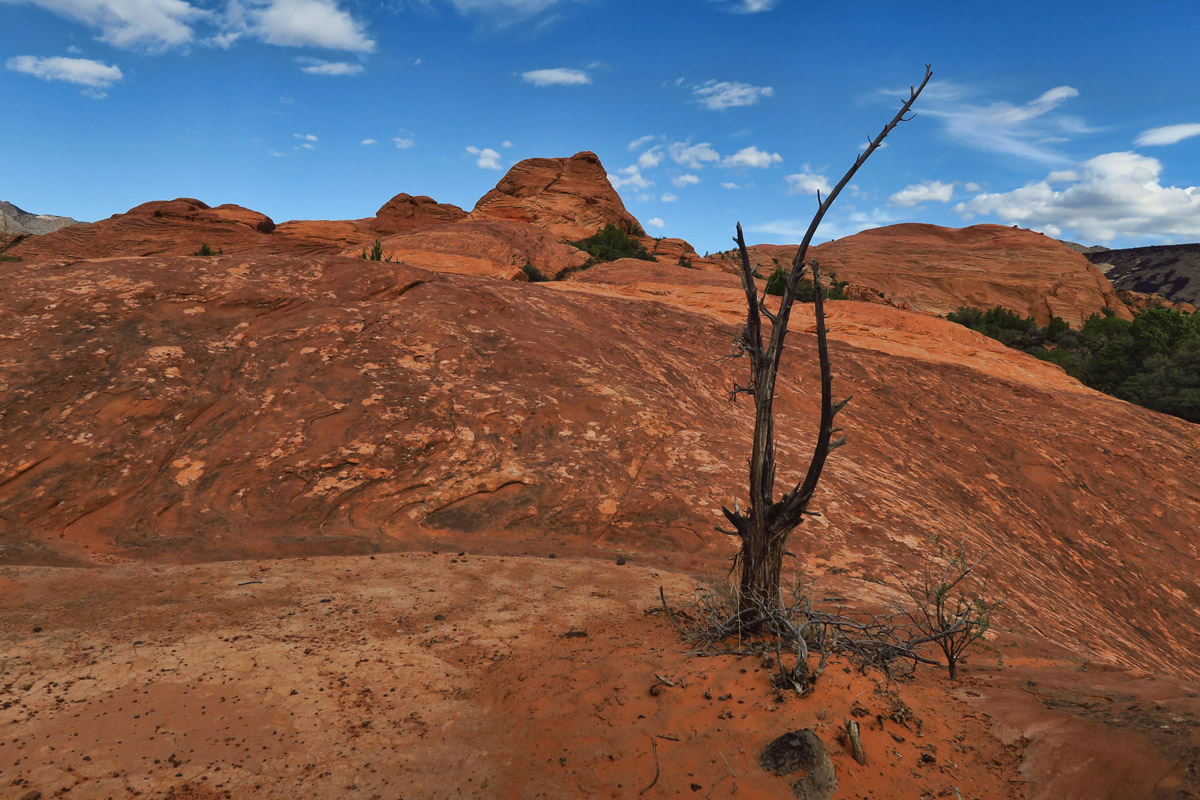 But I can’t help myself.  I’m not a half hour into the hike until the red rocks begin to put on a show in the early morning light, daring me not to pull out the camera.  The undulating waves of sandstone all appear new to me, as if painting a different scene with the same palette.   Before I know it, I am crouching down to capture the angles, marveling at the variegated colors of the canyon as it graduates from the pale green sagebrush to the vibrant red of the sandstone topped by black lava-capped ridges against the white cliffs of sandstone as a backdrop against a pale blue sky.  There are as many colors on the horizon as there are reasons why I am in love with this canyon. 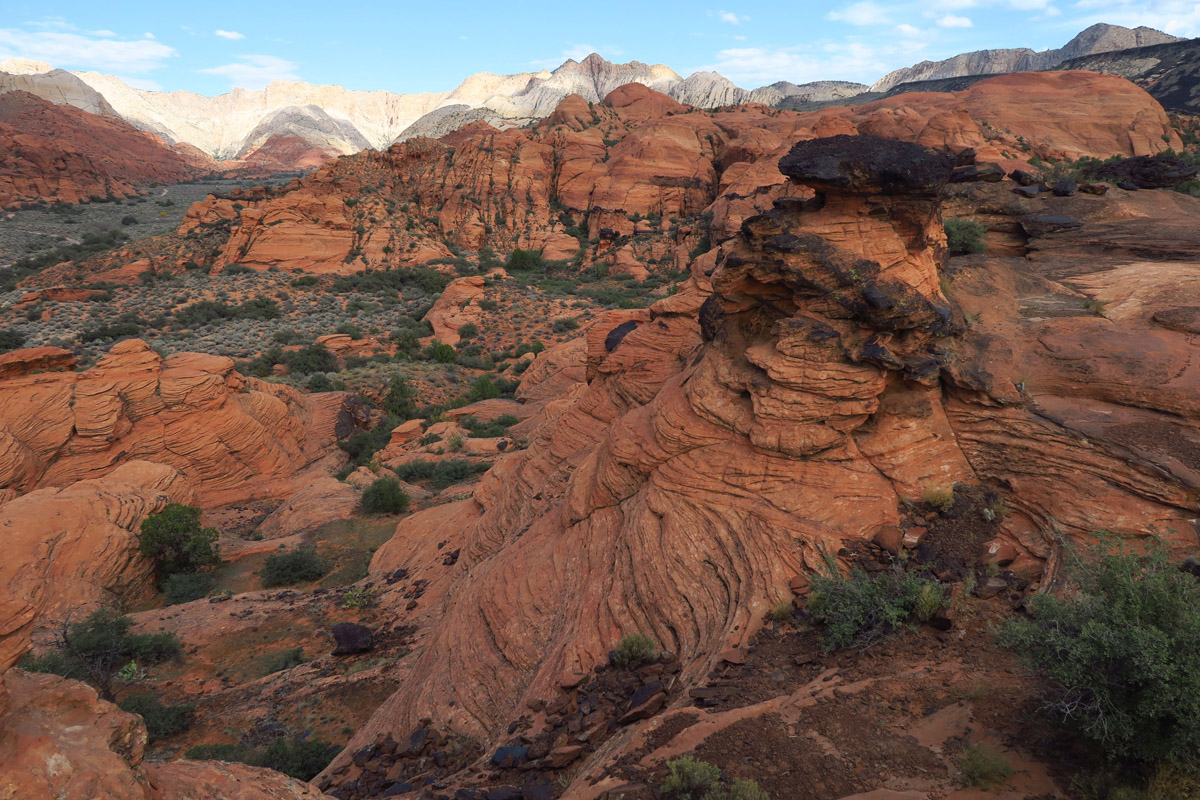 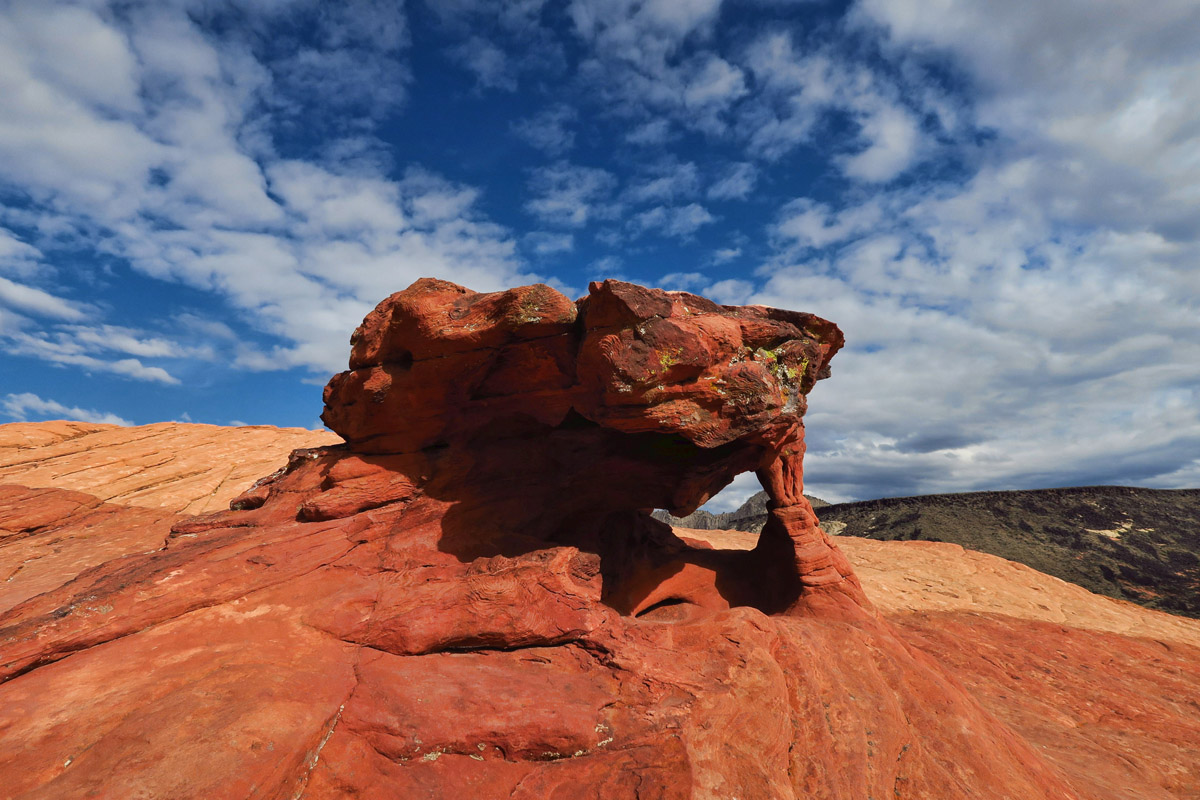 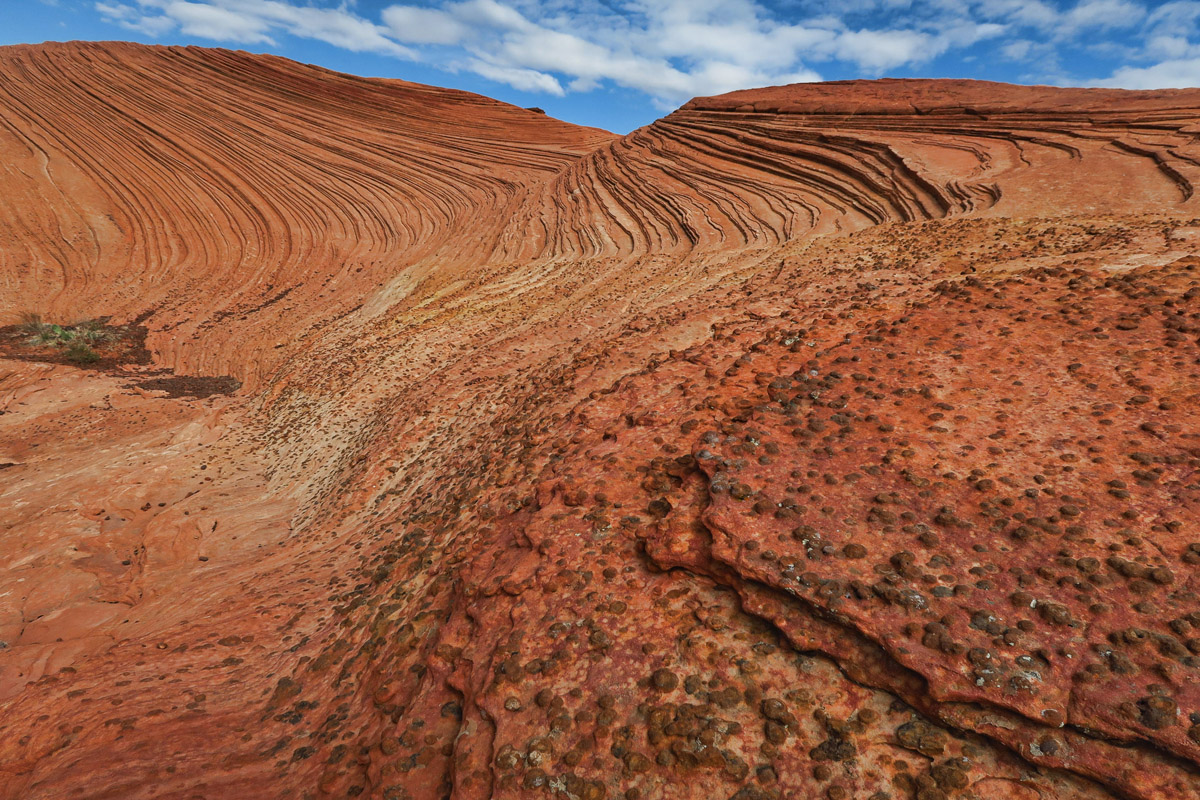 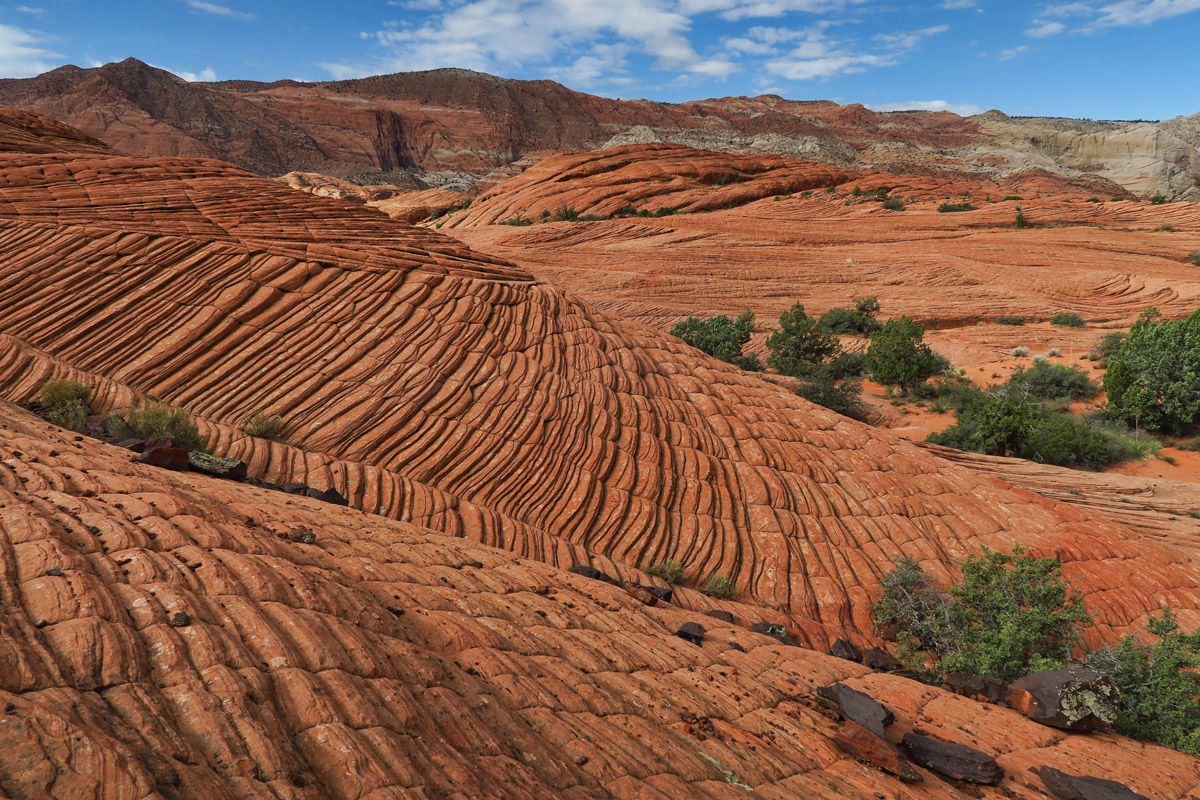 Waves of Navajo sandstone look different from every angle.

While visiting the canyon last year with the “red rocks gang,” we ended up in a yet to be explored trail leading through Padre Canyon on the far western edge of the trail map.   Following wandering footprints in the sand while dodging deep waterholes, we ended up in a side canyon requiring a good bit of scrambling to eventually rejoin the “official” trail near the top of the saddle.   I’d since been curious to see where we wandered off the trail.  So this trip, I decided to approach it from the opposite direction. 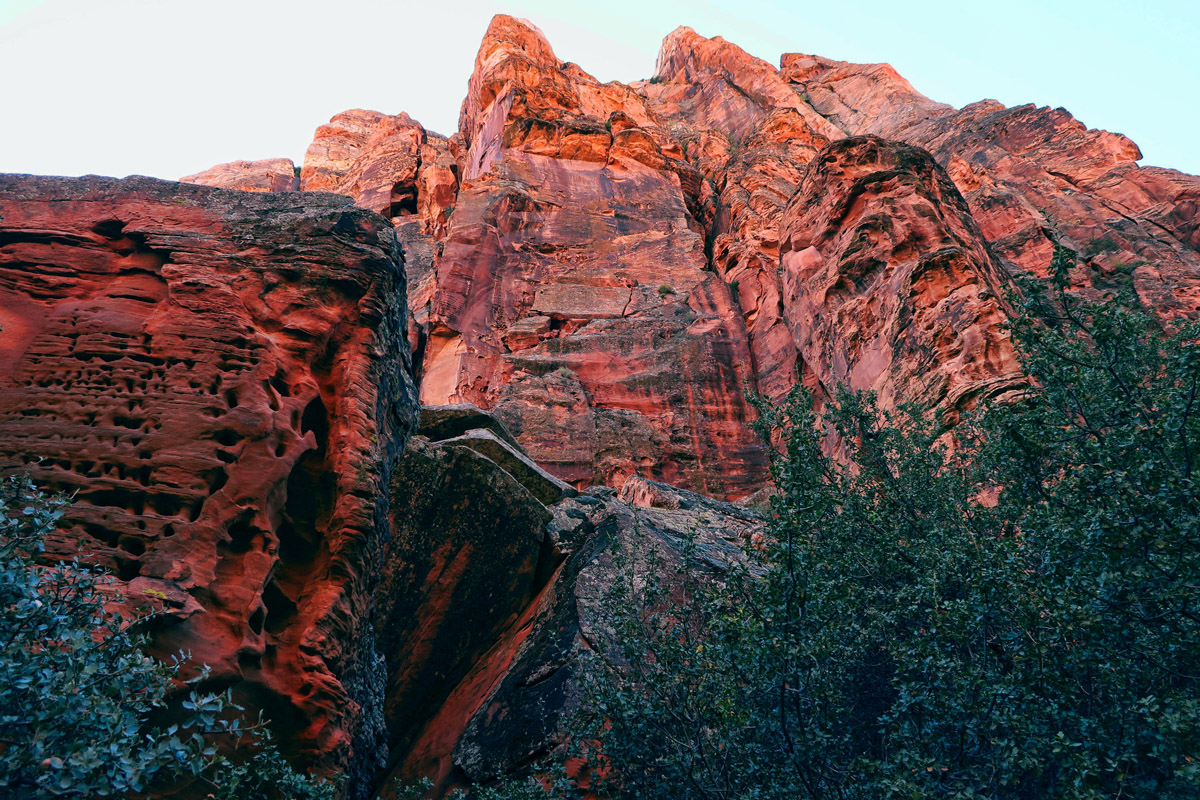 Cliffs on the side of the canyon glow a neon red. 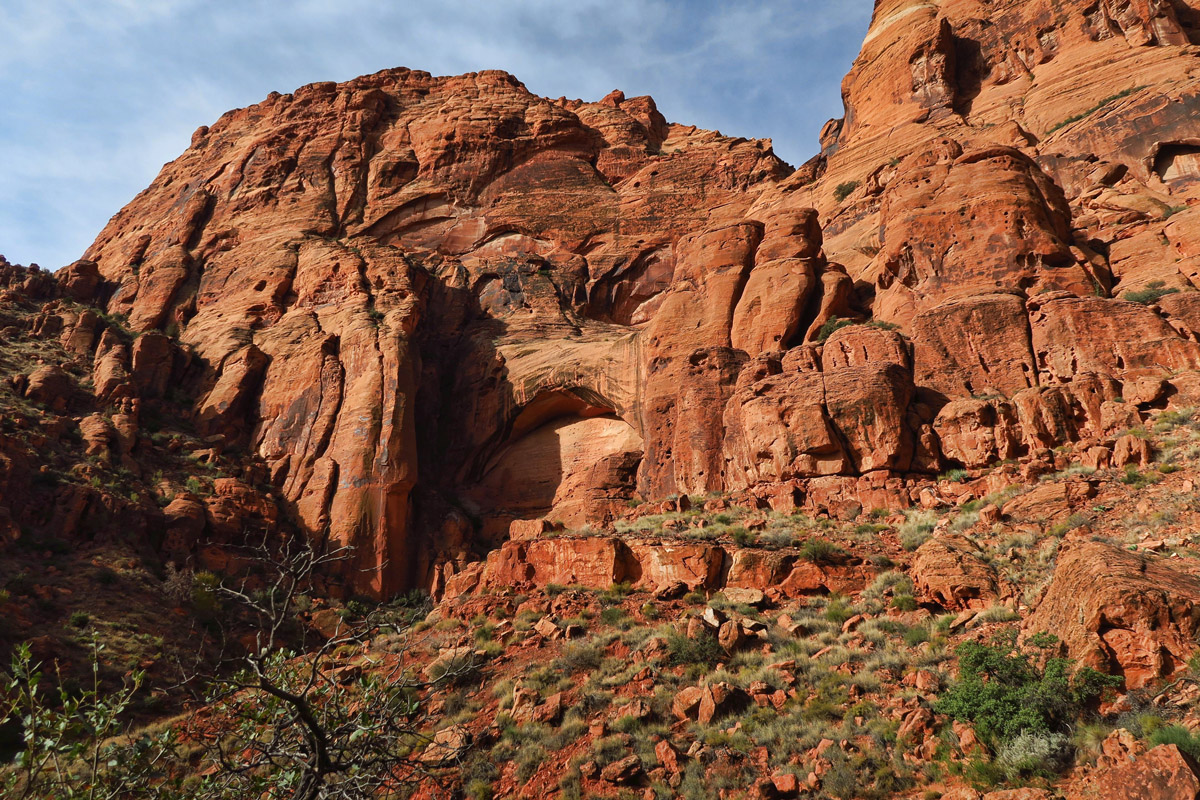 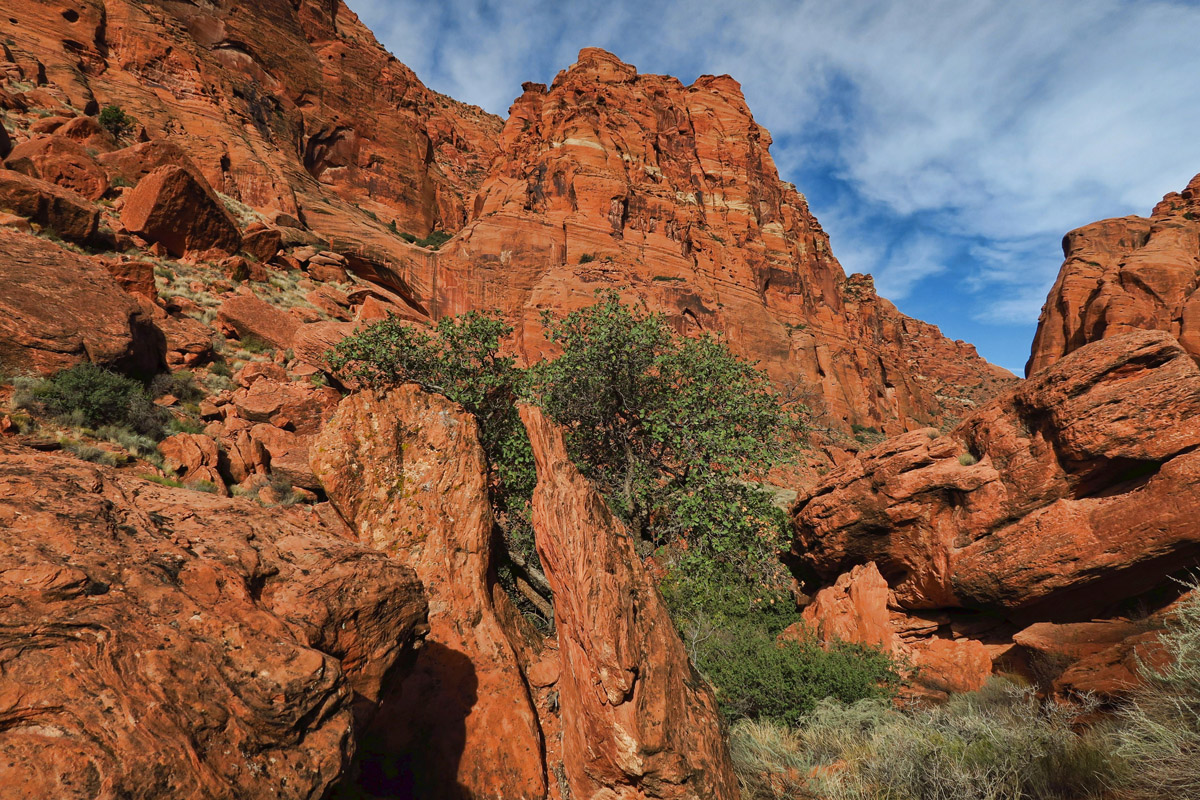 It’s departure day, so I have to be out of the campground by 2:00pm.  I don’t have time for the entire 6 mile loop, so I decide to cut the hike in half by dropping the Tracker off in the parking lot of the Tuacahan Center for the Arts.  I’ll hike up and over the saddle, down through Padre Canyon and back to the campground where the Winnie is packed up and ready to roll.  I’ll then swing back by the parking lot and pick up the Tracker on my way out of St. George, thereby creating my own shuttle service.    I am halfway across the parking lot when I realize I have left the Winnie keys locked in the glove compartment of the Tracker.   That would have been a costly mistake, both in time and energy! 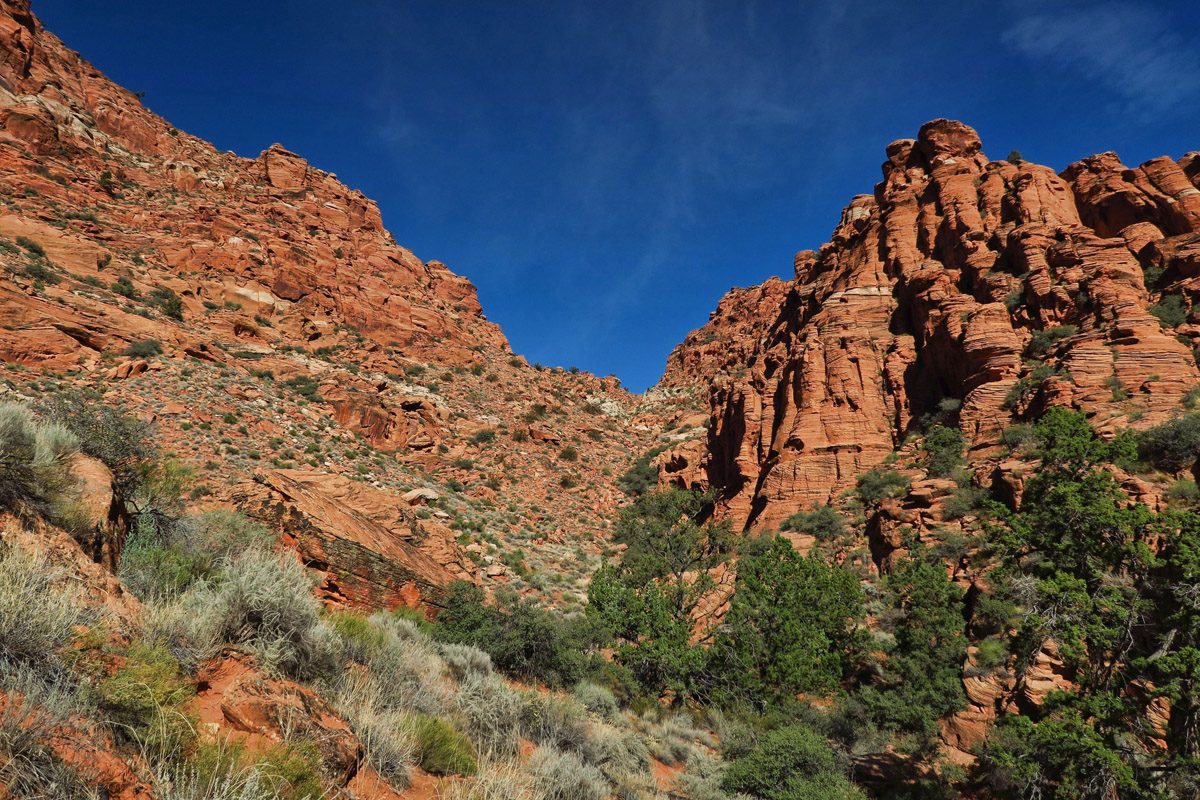 Looking up at the saddle which I must cross to reach Padre Canyon. 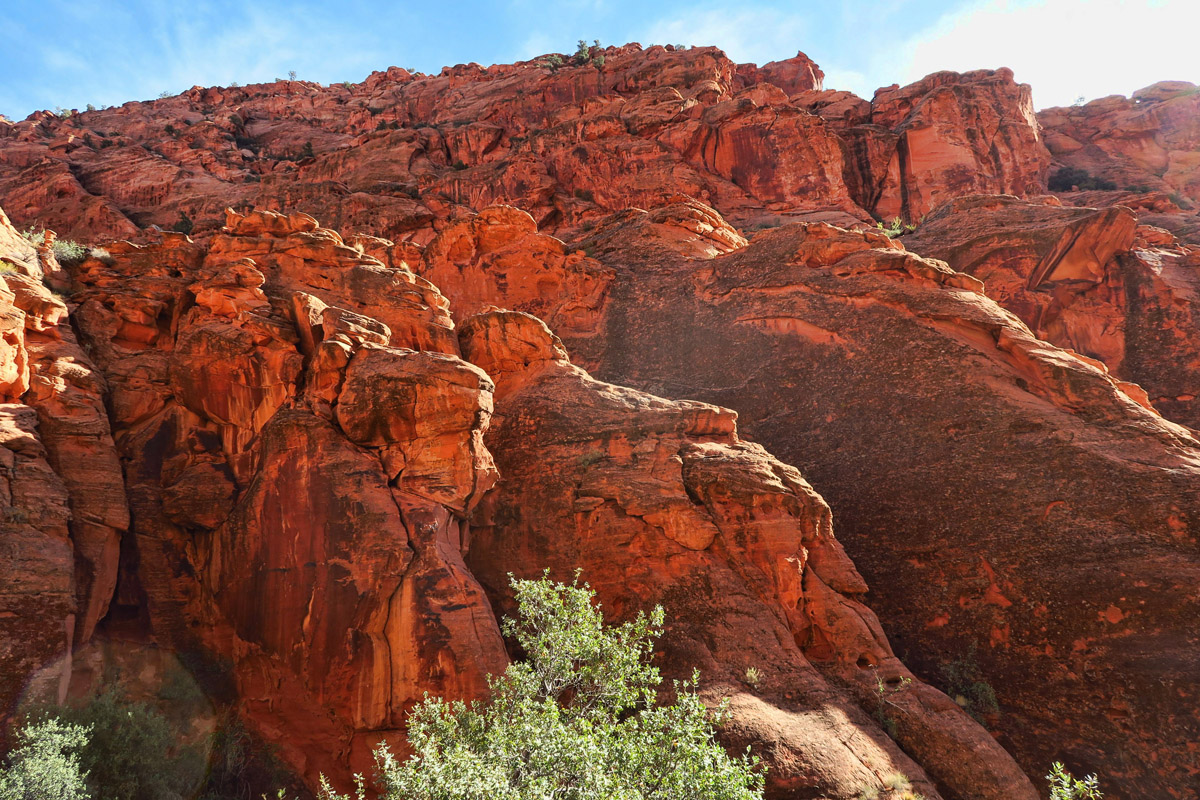 The sun reflecting off the red rock gives an added warmth. 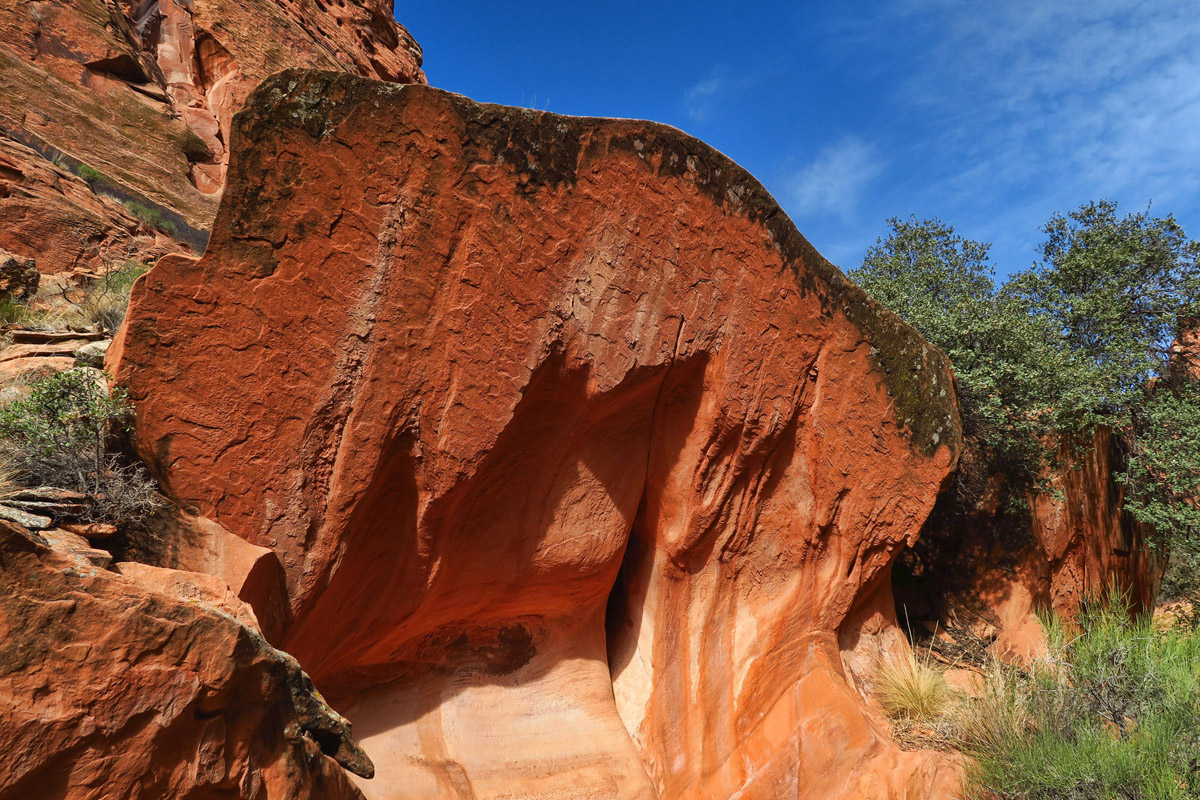 One of my “side routes” up the landslide leads me to this “Georgia O’Keefe-like” structure.

The route-finding up the Tuacahan Saddle seems even more difficult to me than coming the other direction, but that’s most likely because I am the one doing the finding, whereas last time, I was following.  I feel like I am scrambling up a landslide of volkswagon-sized boulders.  I have to backtrack several times, but eventually find a clear path to the saddle. 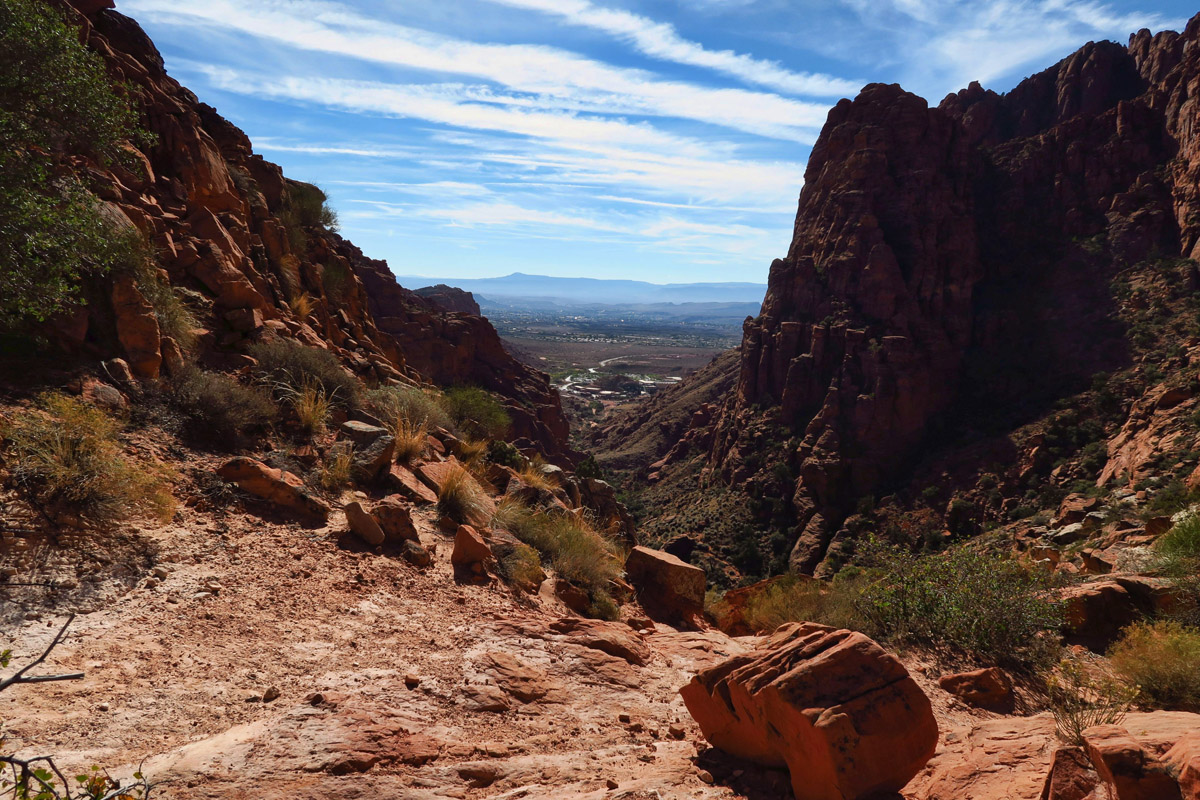 Looking southwest from the saddle, back toward Tuacahn parking lot. 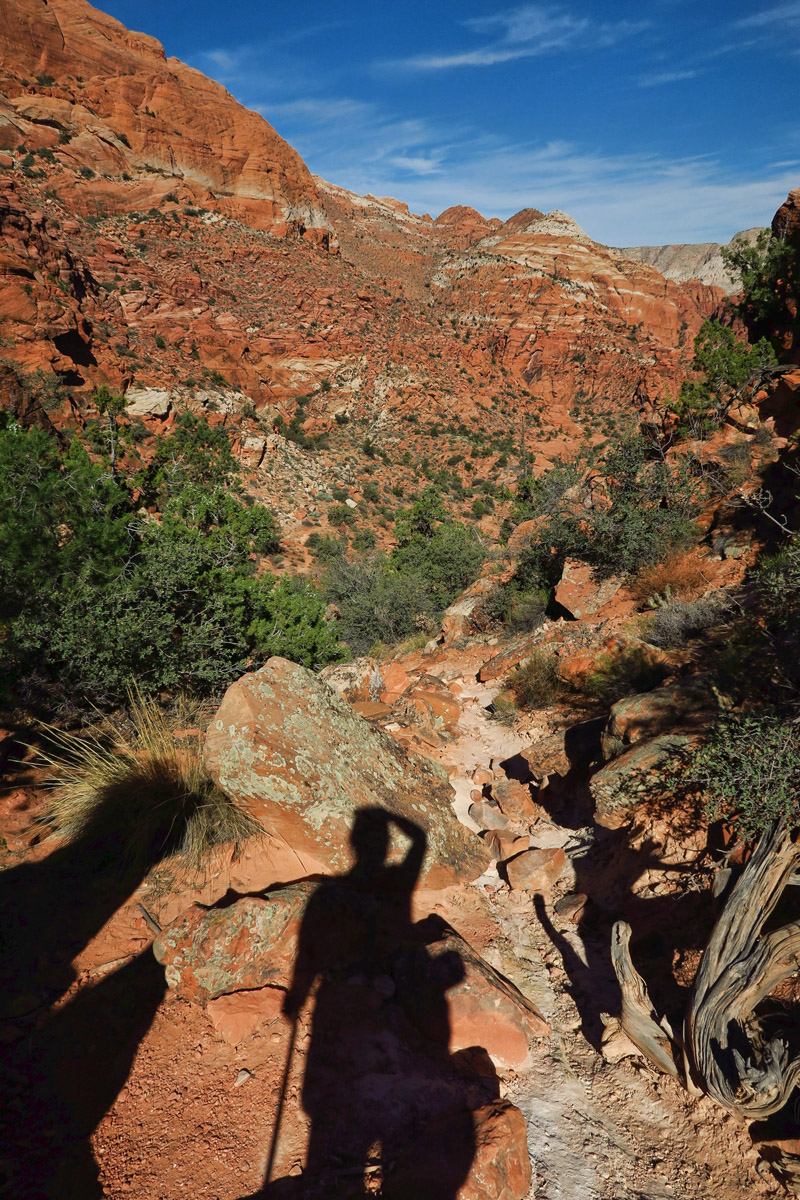 Looking northeast from the saddle, down Padre Canyon. 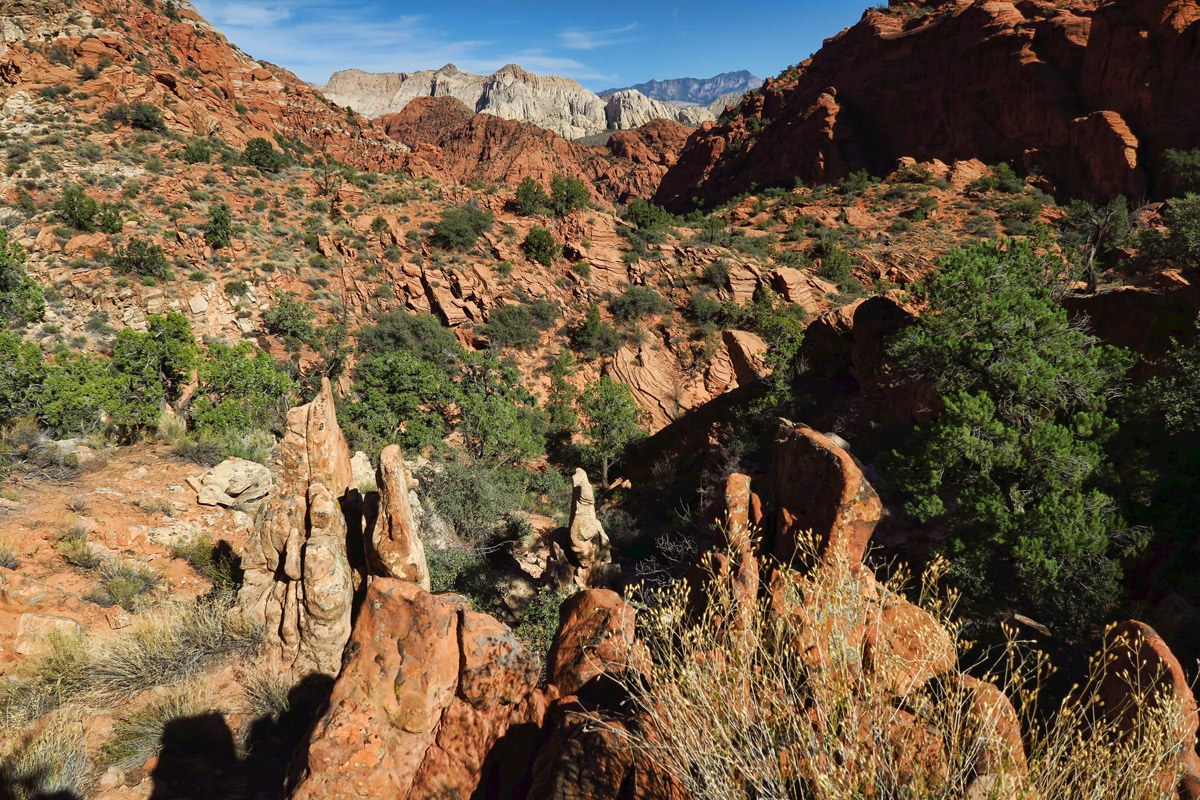 Heading down the Padre Canyon trail.

Heading down the other side through Padre Canyon is much easier, as the trail is visible looking down the canyon.   I see where we got off track last year, as the official trail curves far toward the west, whereas we followed the path of least resistance up the eastern side of the canyon.   I end up back in the Red Sands wash far too soon, as I slog my way back through the deep sand to the campground with time enough for a shower before check-out. Curiosity now satisfied, it made a repeat visit feel new again. 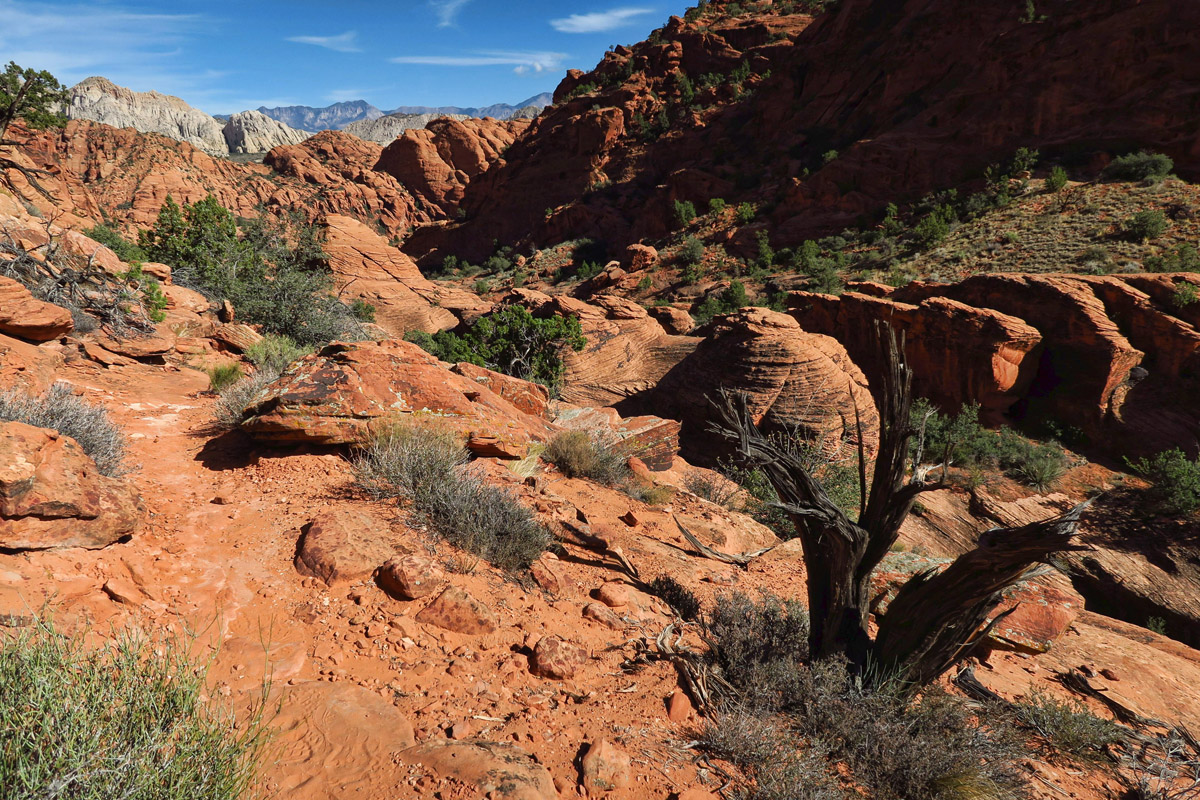 Looking north, the trail swings wide across the western side of the canyon. 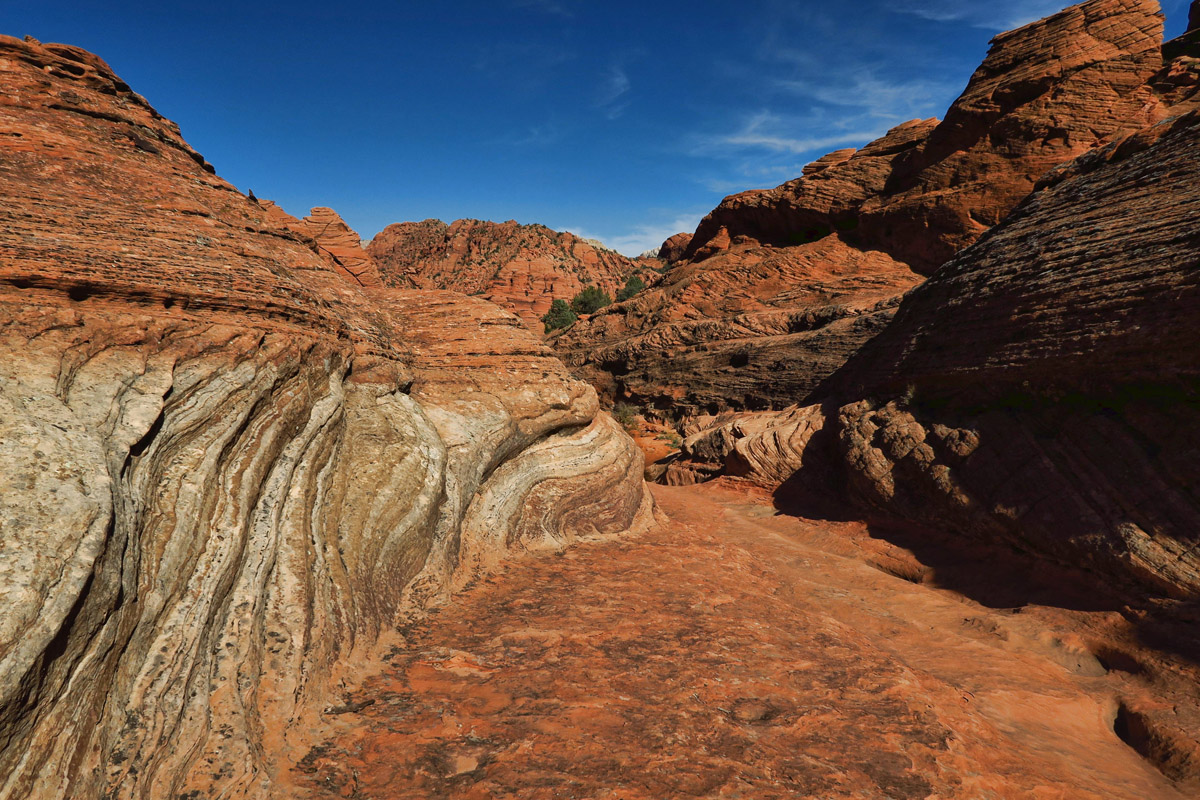 Nearing the end of the Padre Canyon trail. 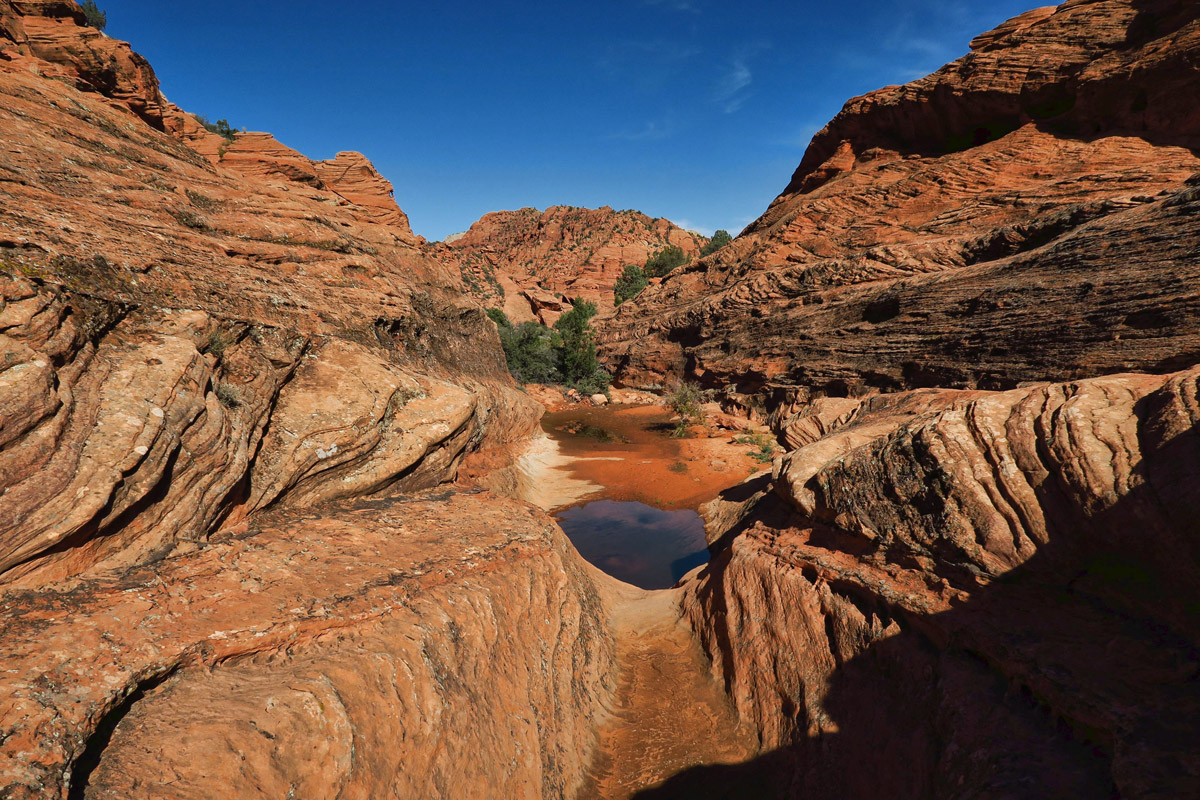 After these water pools, the trail intersects with the Red Sands Trail.

Note:  For anyone attempting this hike, please be aware the “Three Ponds” trail that appears on trail maps was recently renamed the “Red Sands” trail.   I was told this was done because families set out across the deep hot sand in search of actual ponds for swimming, ergo the new name, “Red Sands” trail.