No printed maps, android apps, or TripAdvisor Listicles can help when it comes to easily finding one’s way around Guanajuato.  Not even the Lonely Planet guide, which allocates Guanajuato a measly seven out of 896 pages in their Mexico Travel Guide, can be much help.  No, it takes lots of insider tips, landmarks, and a few good games of “Estoy Perdido” (I’m lost!) to finally learn one’s way around this crazy city. 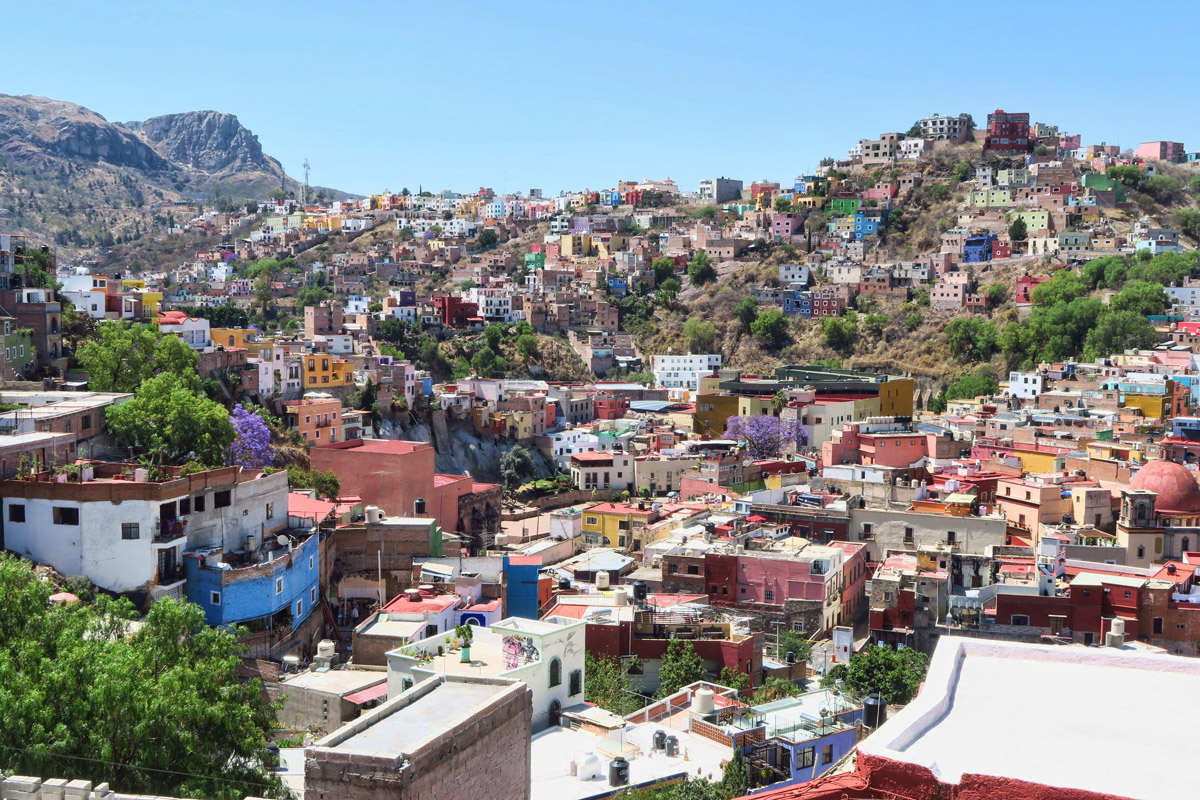 View of beautiful Guanajuato from the terrace where I am staying… 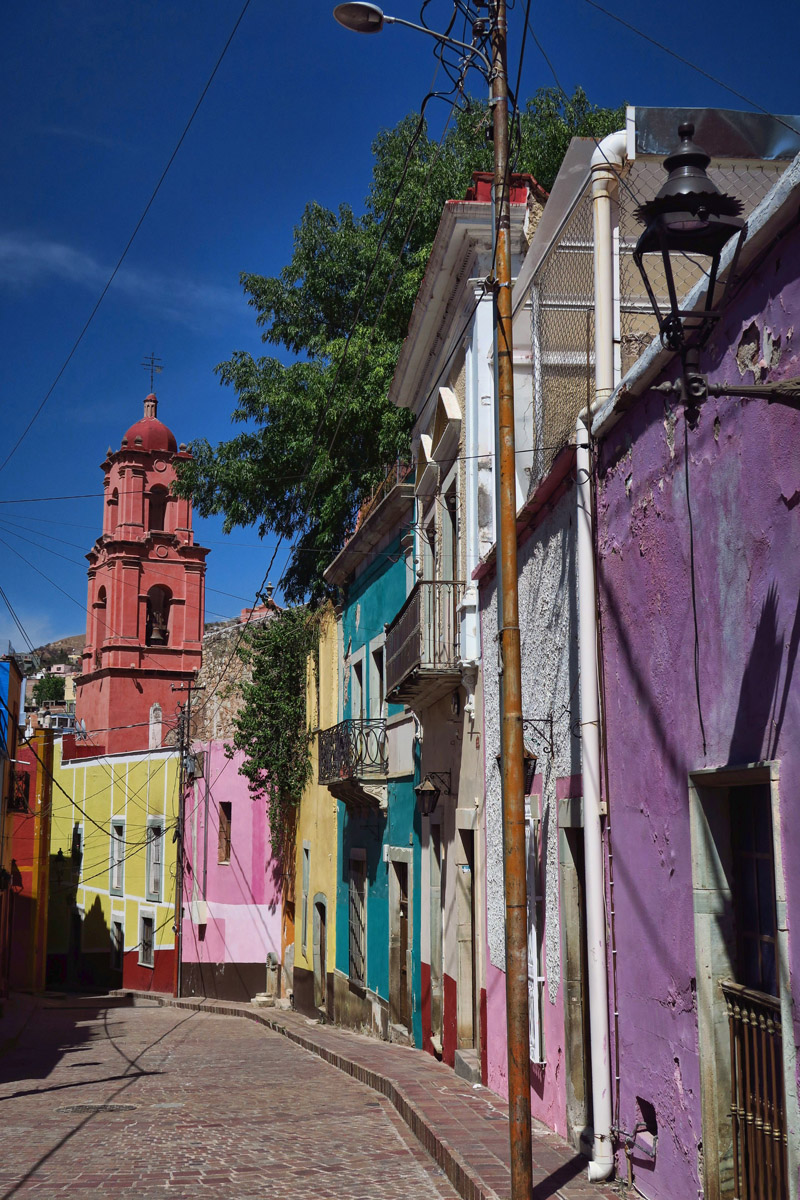 The majority of the city is made up of pedestrian-only streets. 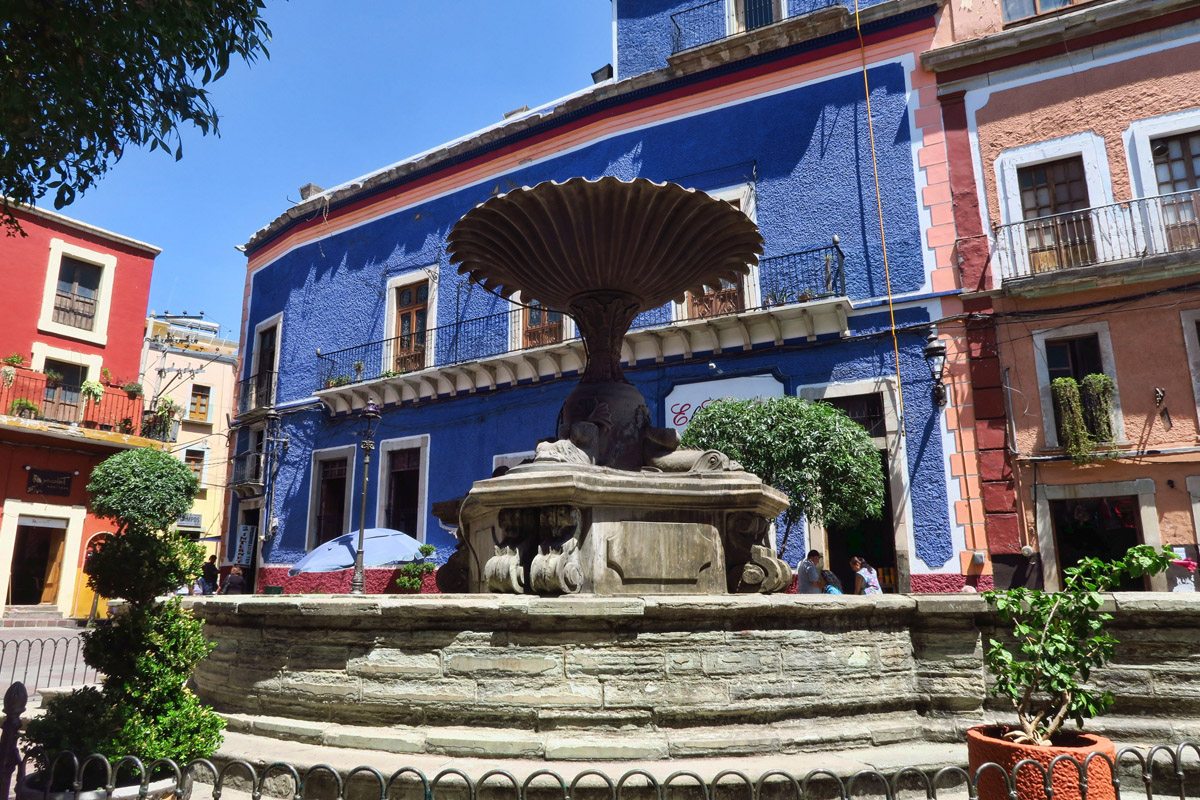 Most callejones lead to beautiful plazas with benches for resting, thankfully! 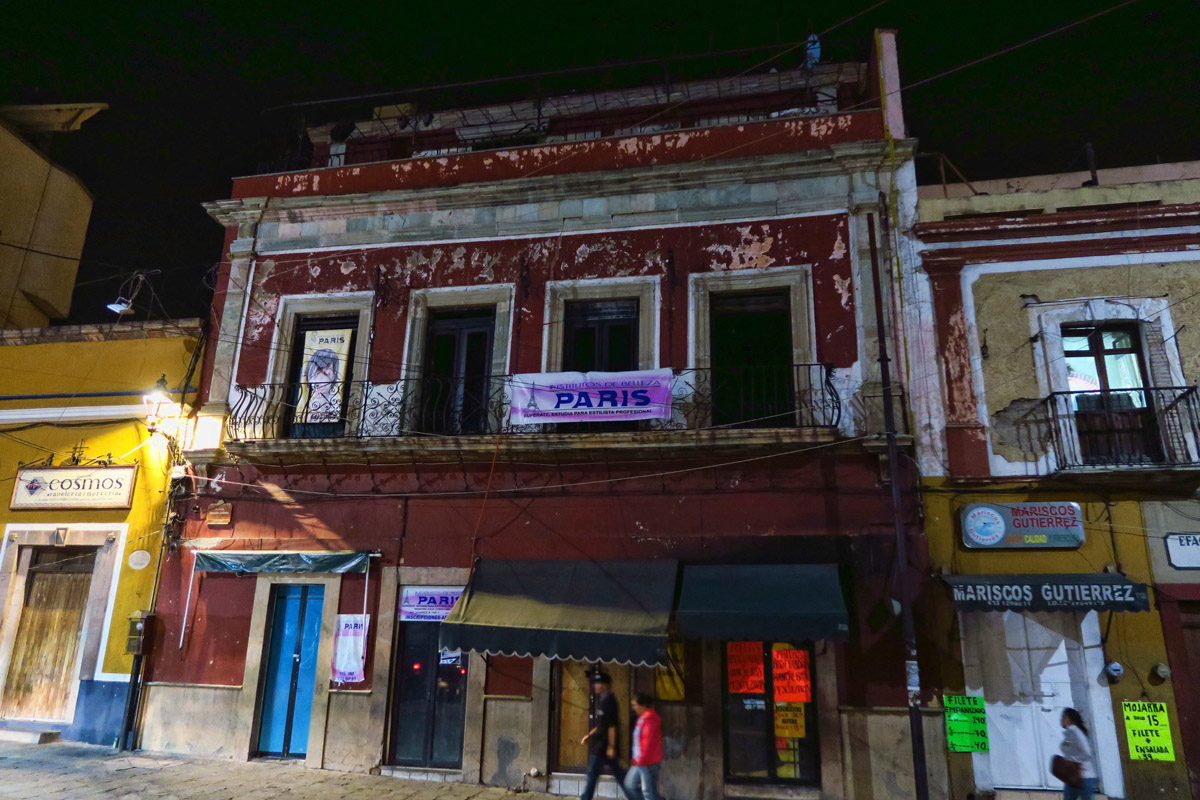 Perhaps no better information resource exists within my own personal realm than my brother Don, temporary but frequent resident and lover of all things Guanajuato.    His countless emails on everything from how to pronounce the intersection of the nearest bus stop, to where best to find a cold draft beer have been invaluable. 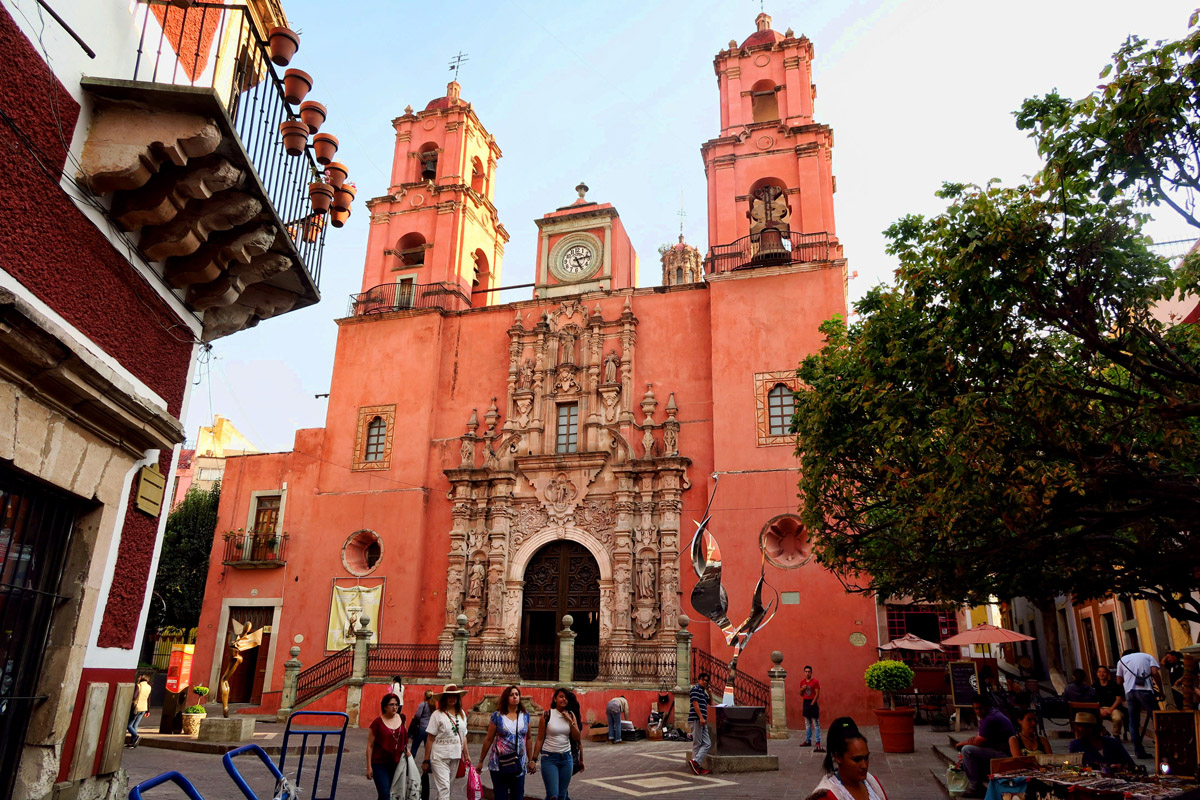 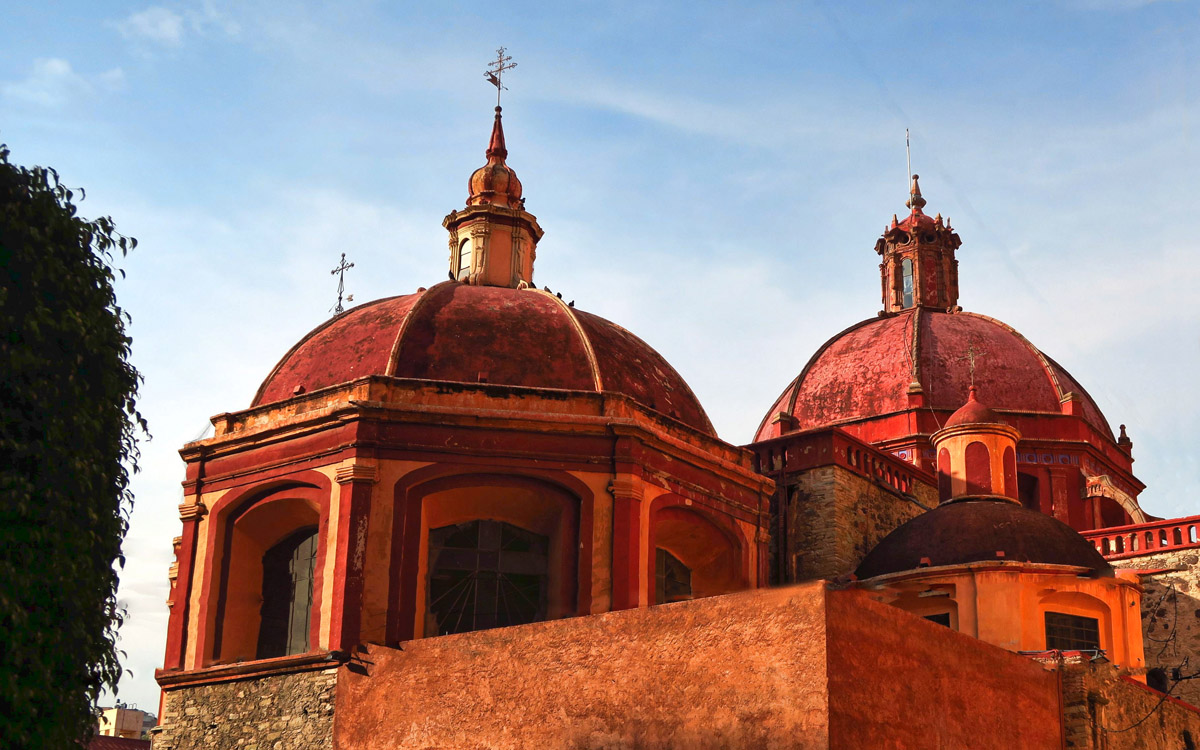 But with over 20 churches in Guanajuato, they can start to look alike… 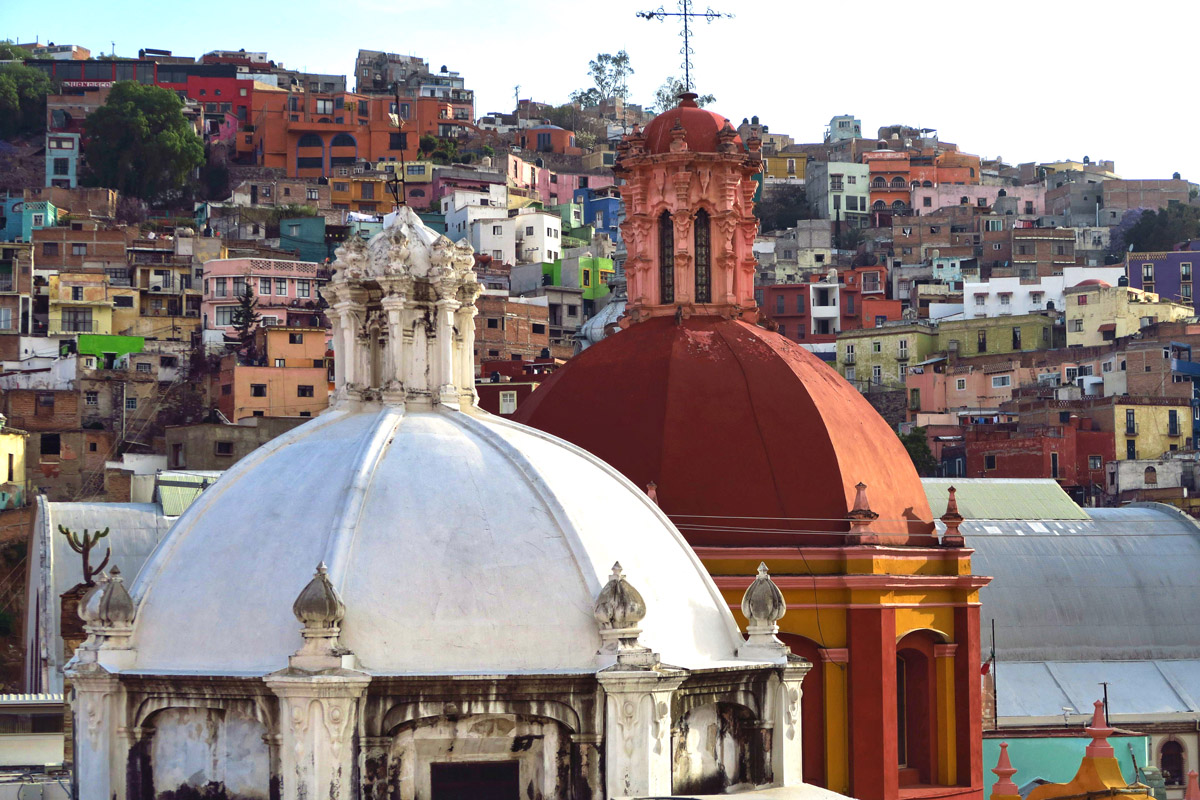 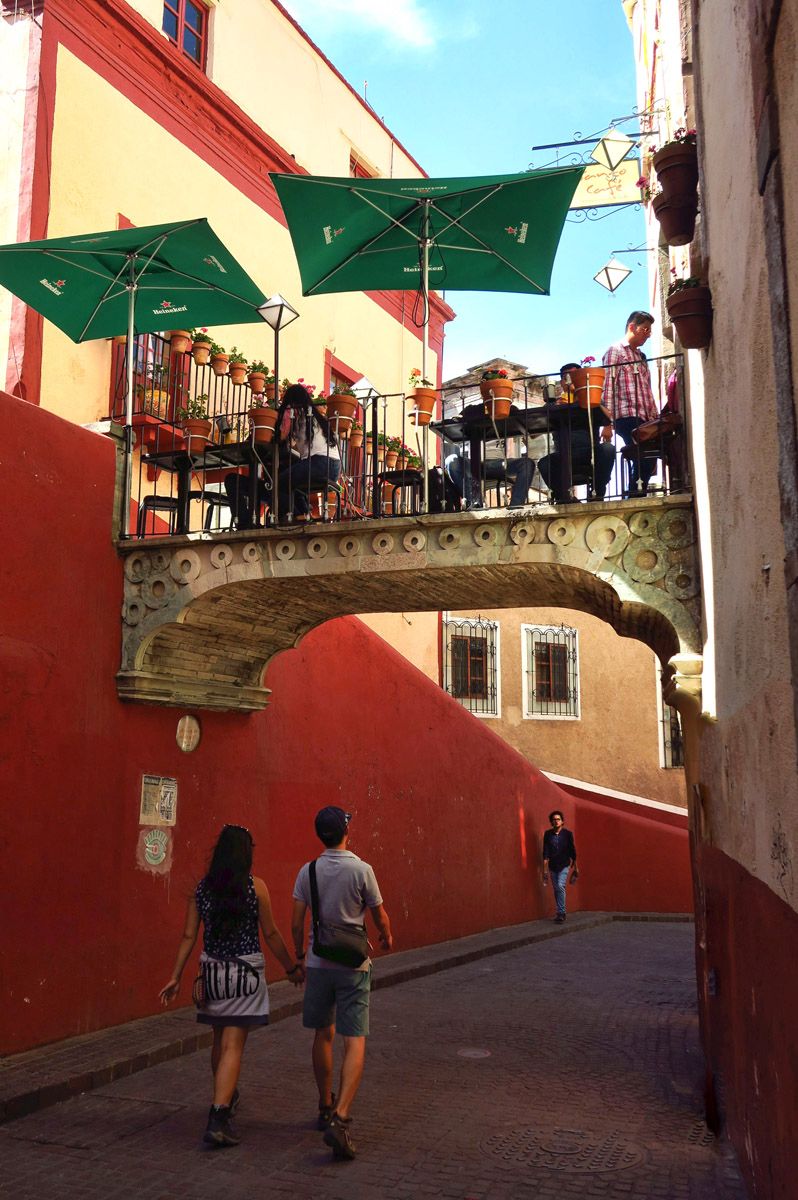 With limited maps and street signs, landmarks like “The Bridge Restaurant” become quite helpful.

Guanajuato is built on opposing sides of hills that flank a rather steep valley.  It’s like a giant bowl, with houses stacked on top of houses until you reach the top of the bowl, rimmed by a road named “The Panoramica.”  Take a look at this map for an idea of what it’s like to find one’s way across town.  It would be a week before I stopped turning on my “Map My Hike” app to be able to find my way back home. 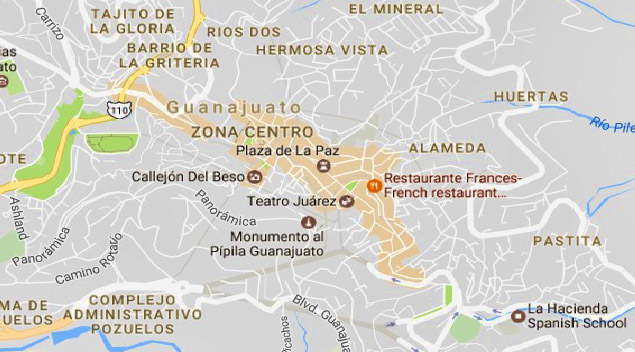 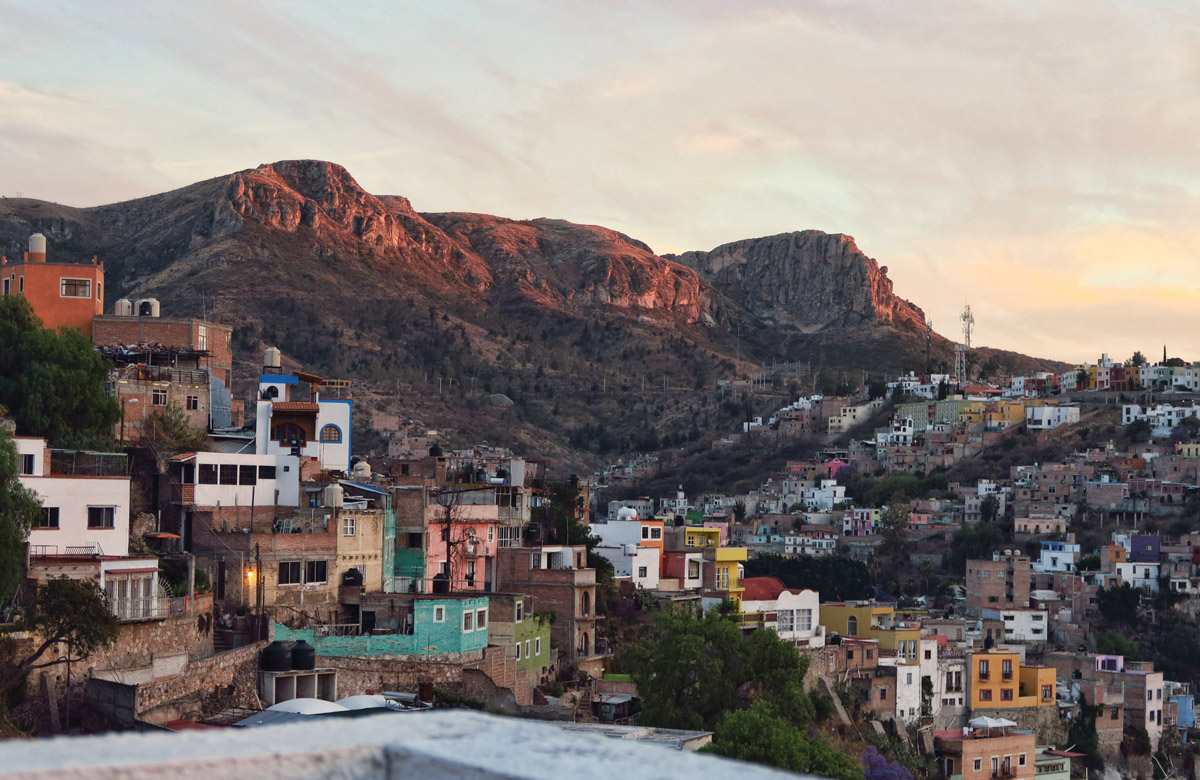 Another notable landmark is “La Bufa,” a bluff overlooking the city. There is a hiking trail up there, but I haven’t made it up yet. 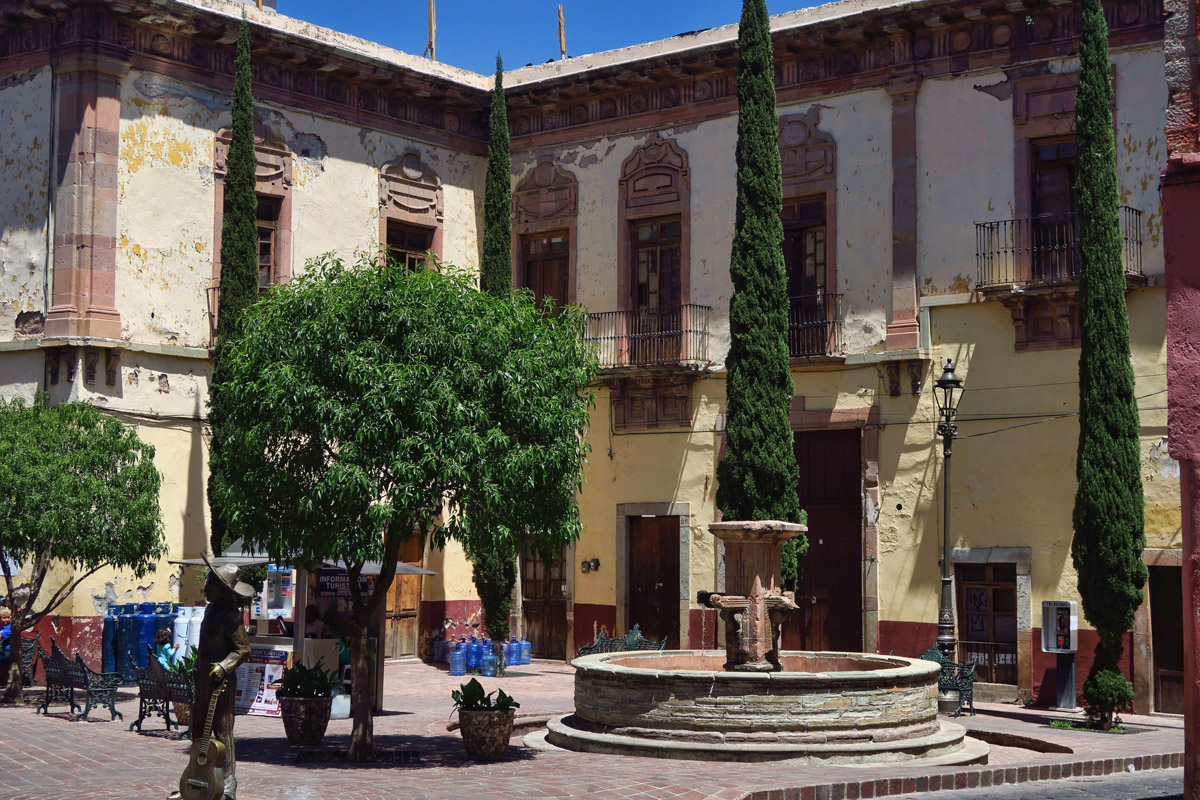 Another place for resting, Plaza Allende. 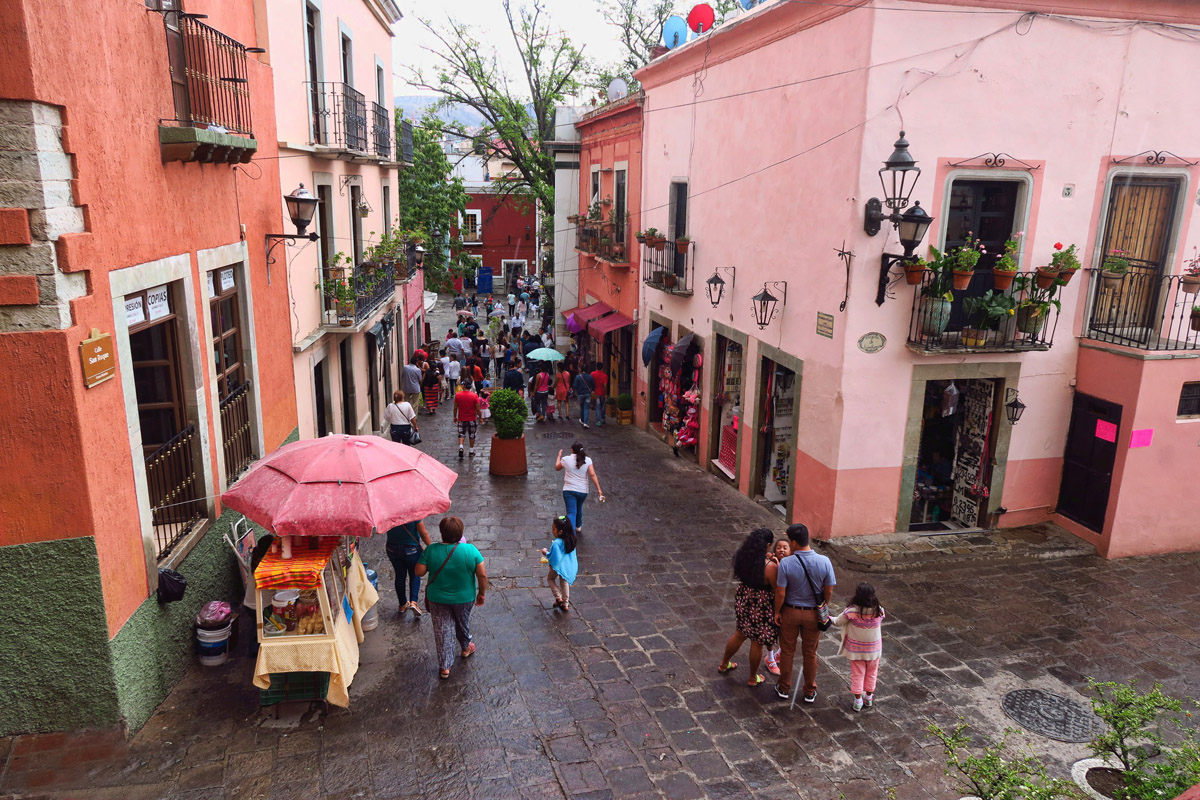 This is such a beautiful little street between San Roche Church and Plaza San Fernando. 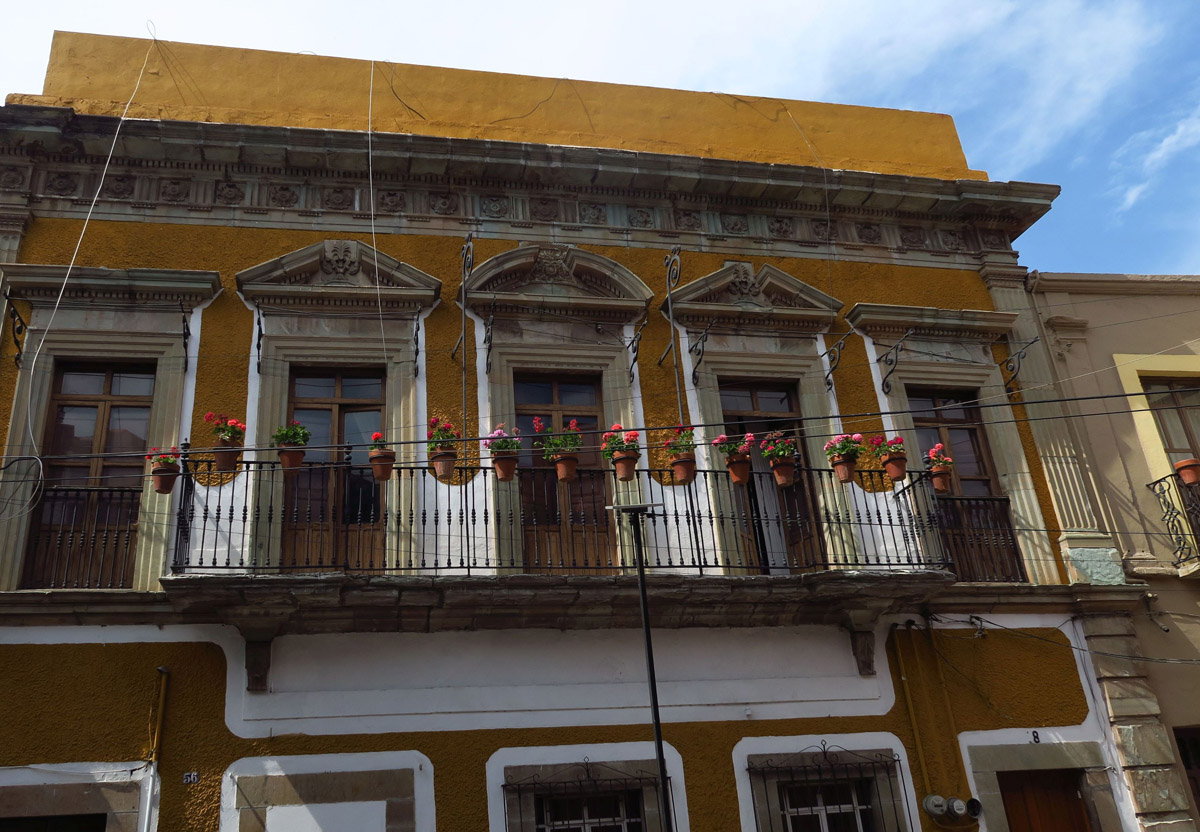 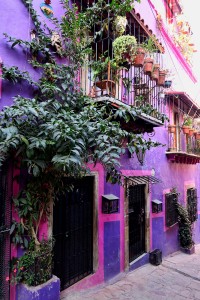 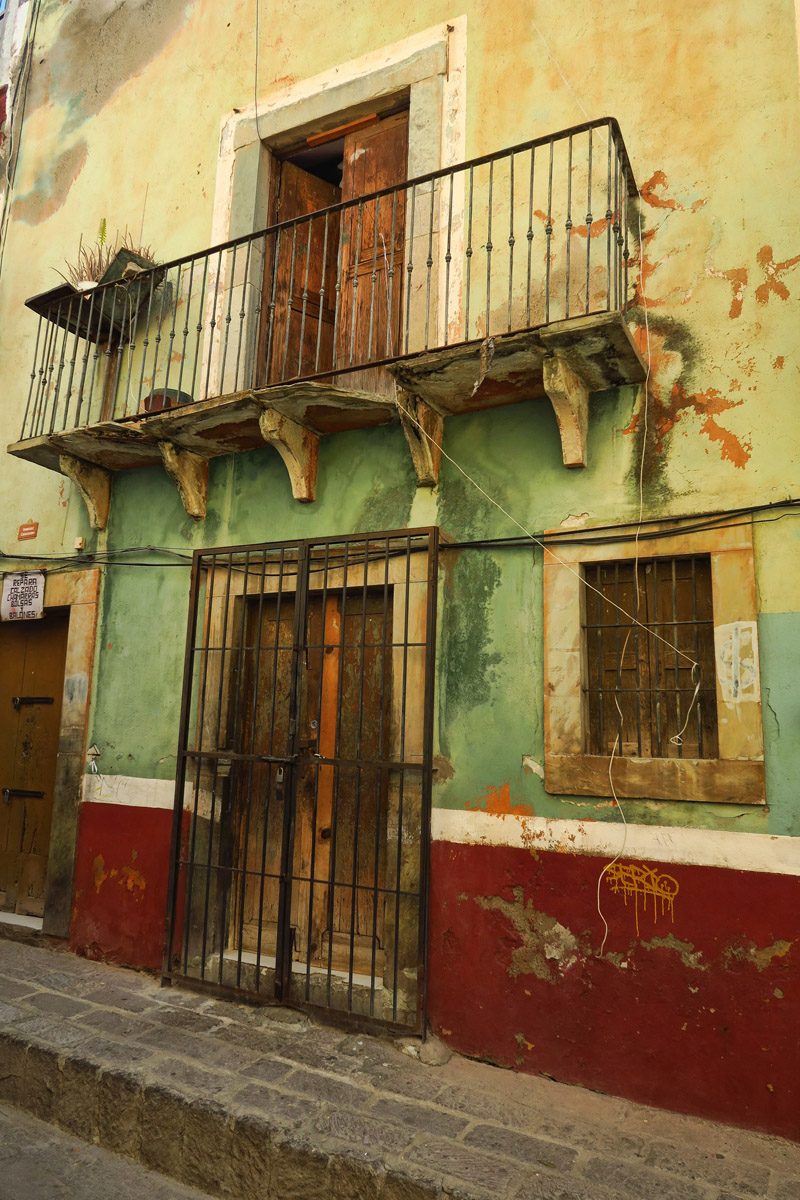 Narrow “callejones” or alleyways empty down from the Panoramica to the bottom of the valley, the main avenue of Benito Juarez which twists, turns, and flows like a river of pedestrians.   Though it may take a bit of wandering down dead ends, if one keeps heading downhill passing through quaint and hidden plazas, they will eventually reach the main avenue.   The majority of these streets are pedestrian-only, while cars, collectivos (modern Sprinter vans,) and big belching old style city buses rumble beneath the streets on Guanajuato’s extensive subterranean thoroughfares.  This labyrinth of tunnels, once a network of rivers and drainage ditches, was built by the mining industry which began operation in the late 1700’s. 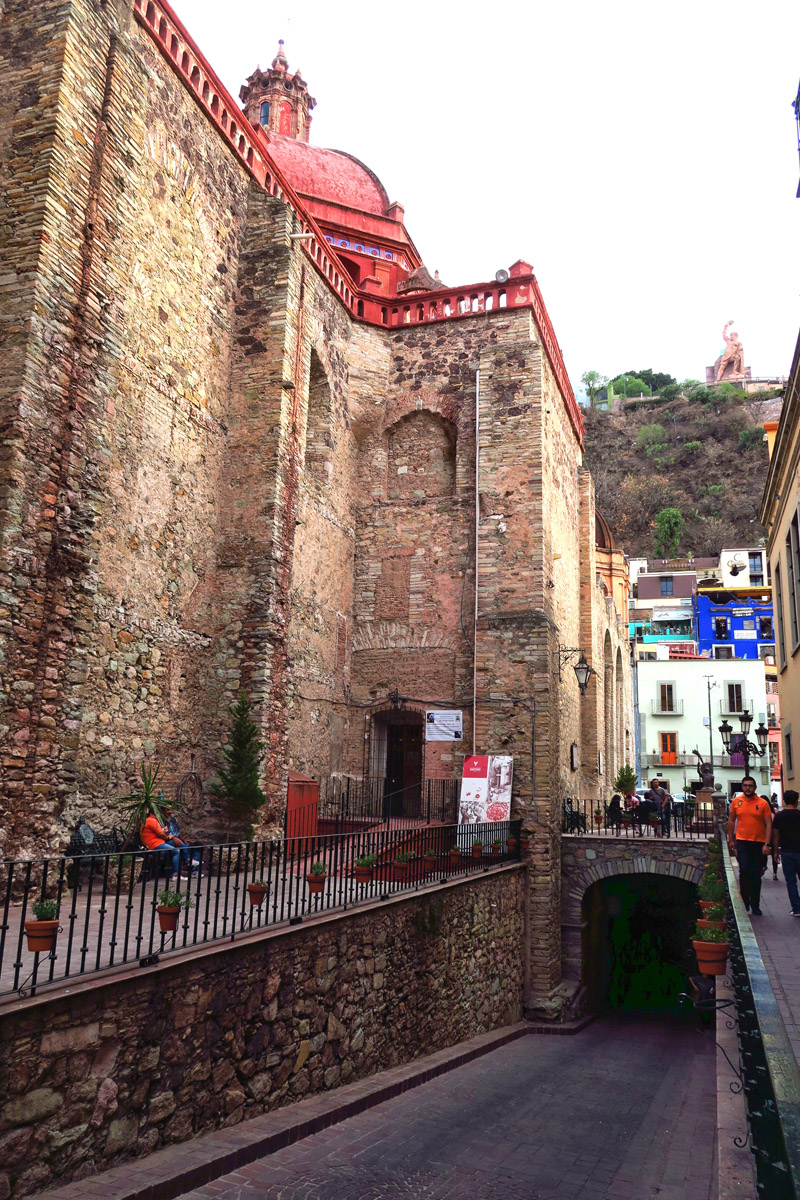 Dozens of entrances lead traffic below ground into the tunnels. 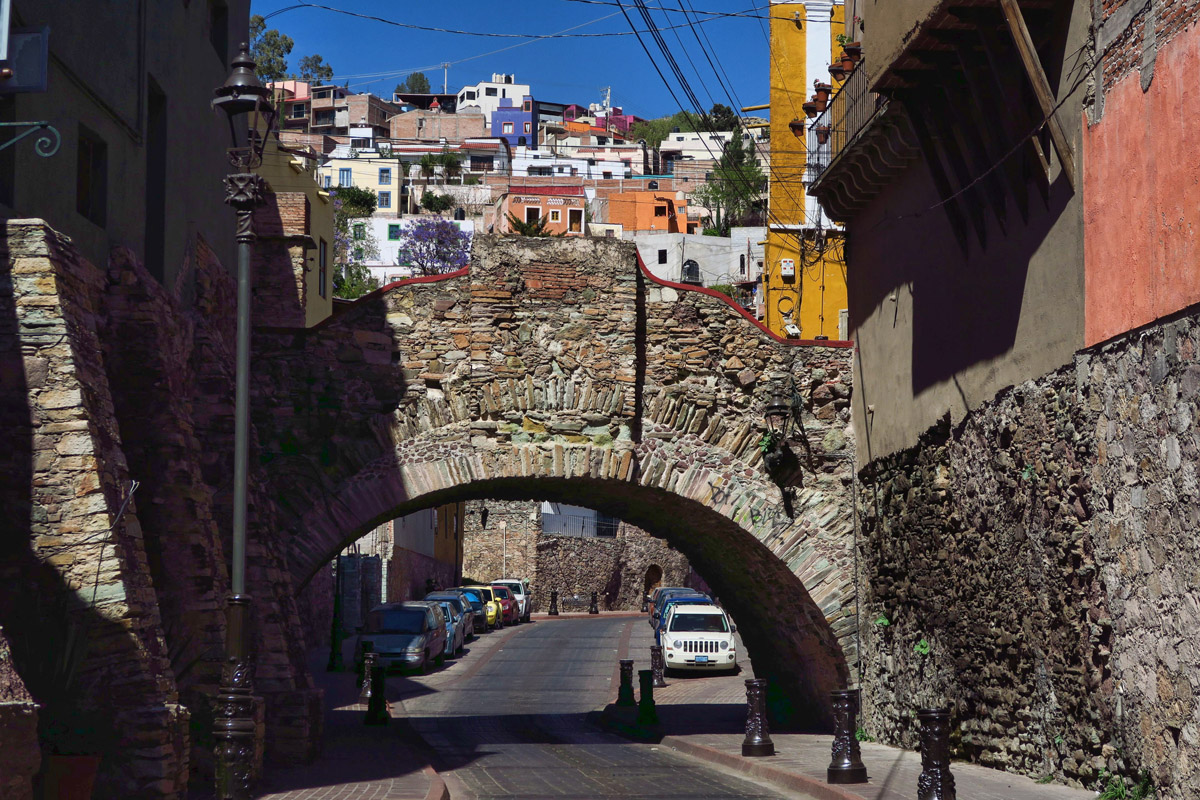 This pedestrian bridge is the overpass I take to class. 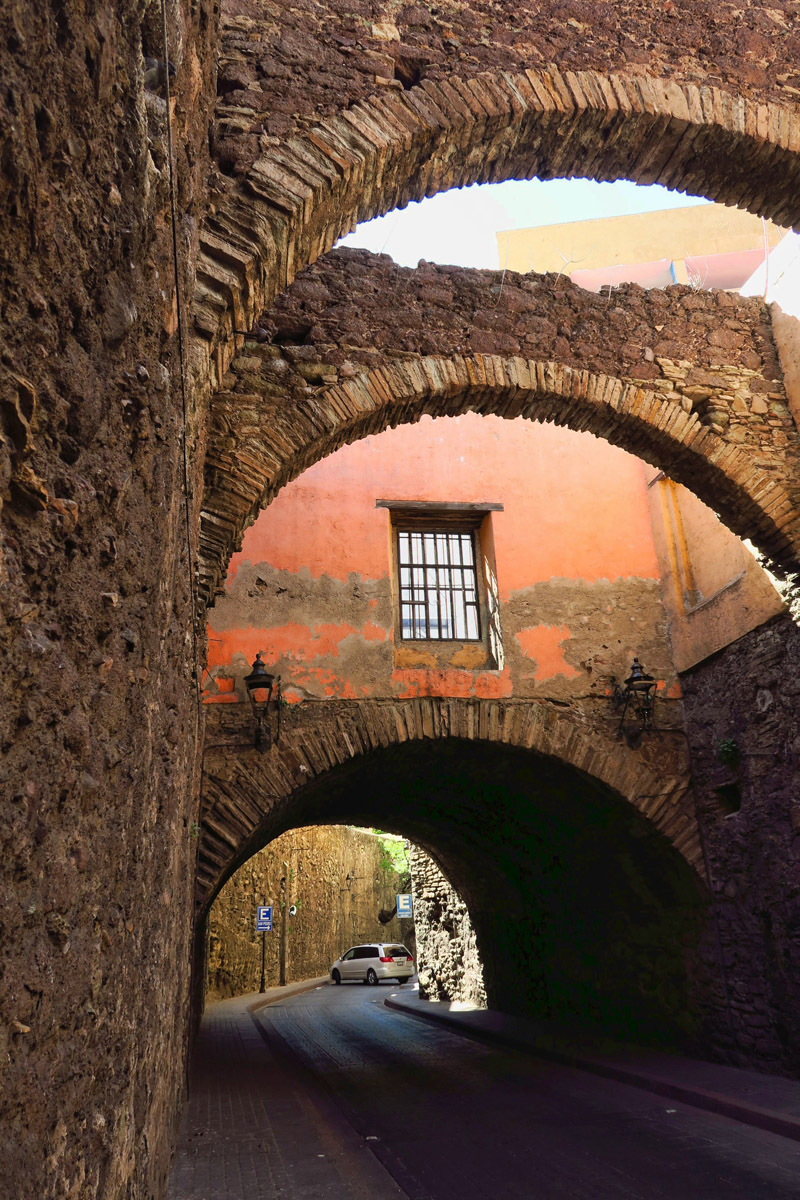 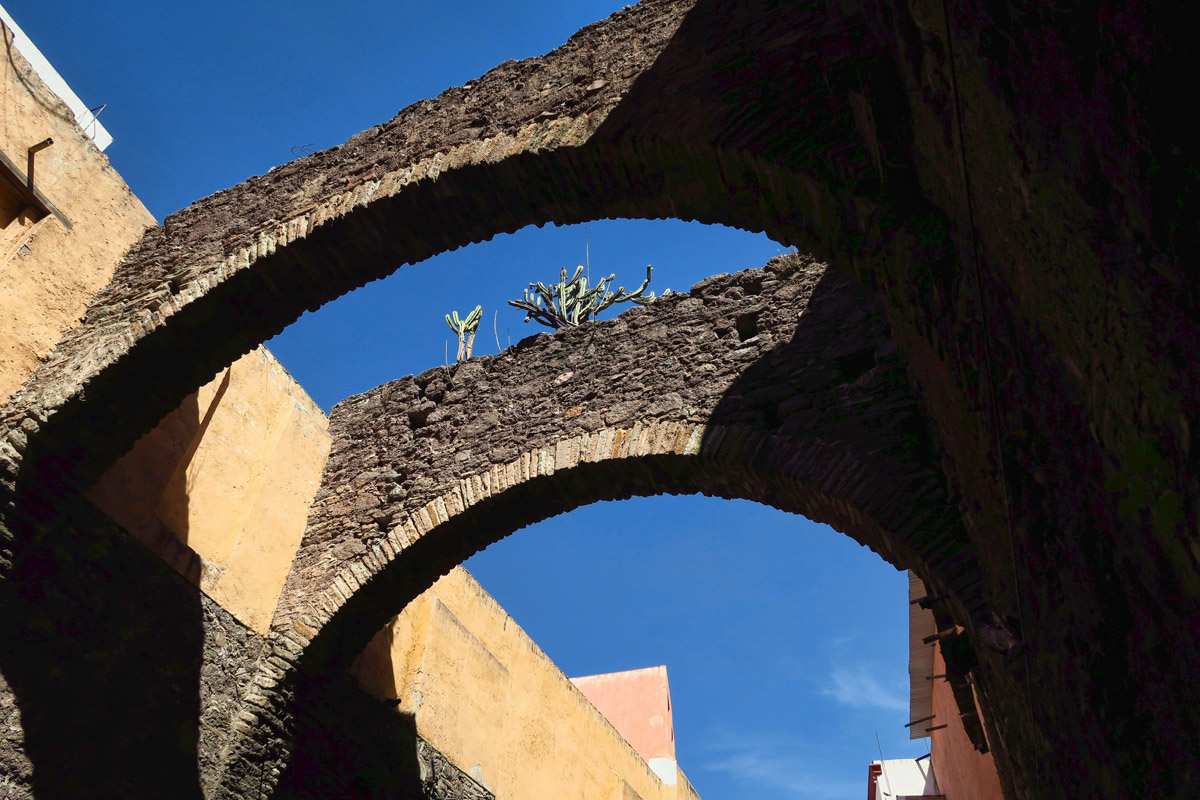 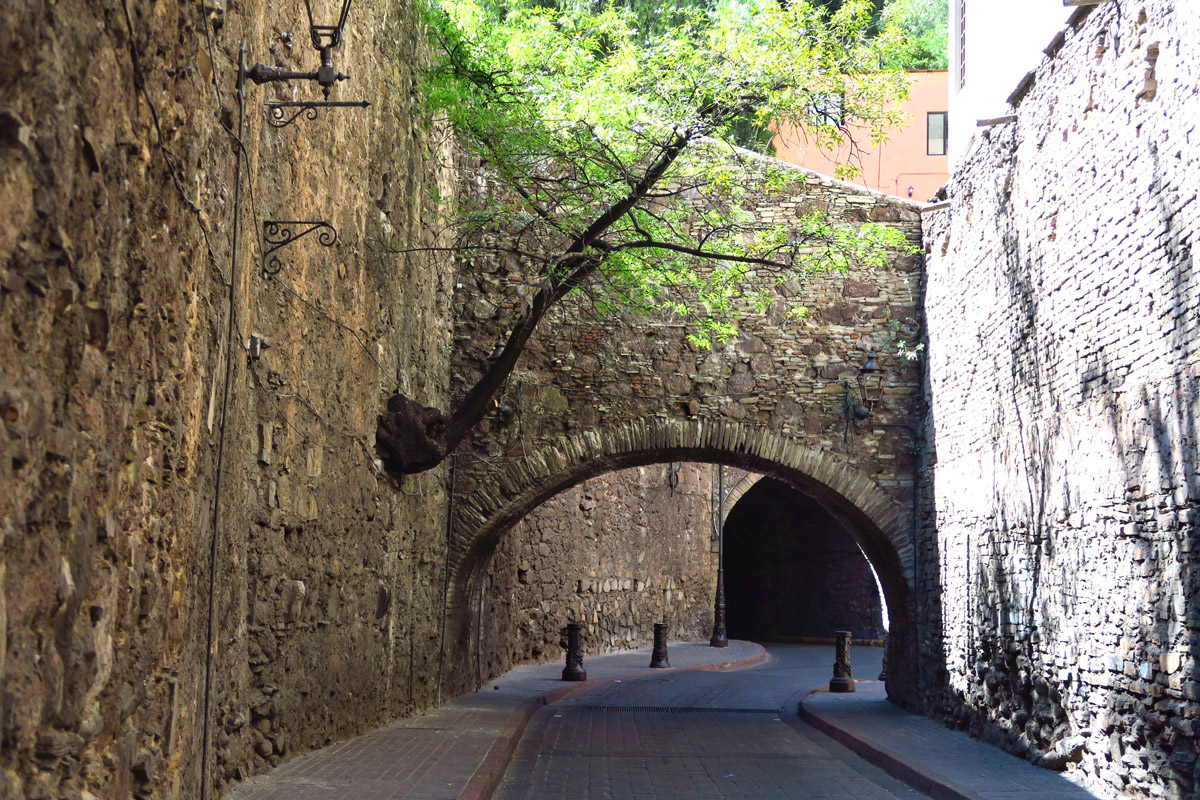 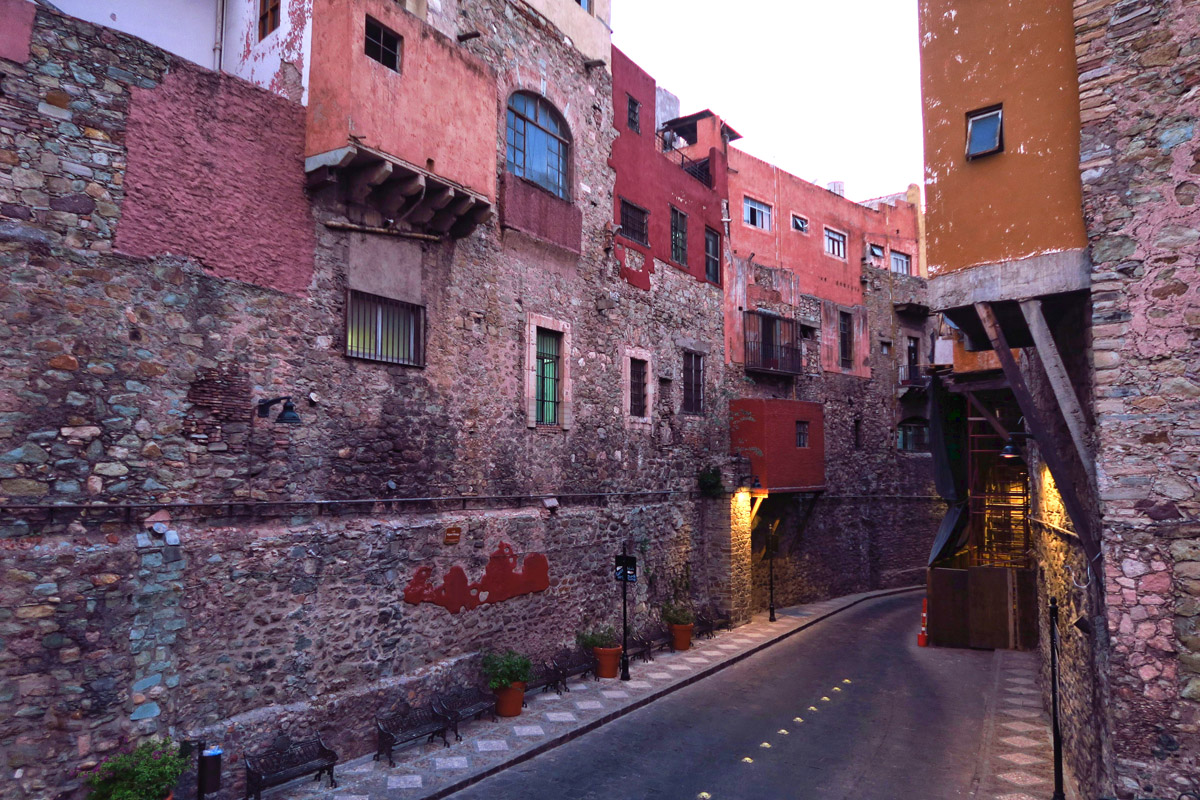 Names of “callejones,” or alleyways, change three or four times, many with amusing names like “Sal si puedes,” (Exit if you can) and my personal favorite, “Perros Muertos,” (Dead Dog Street.)  Sad imagery, admittedly, but who can resist a chuckle over the origin of that street name!   You rarely see a dog on this street, though you sure do see a lot of dog poop. I think the name must scare the $h*t out of them. 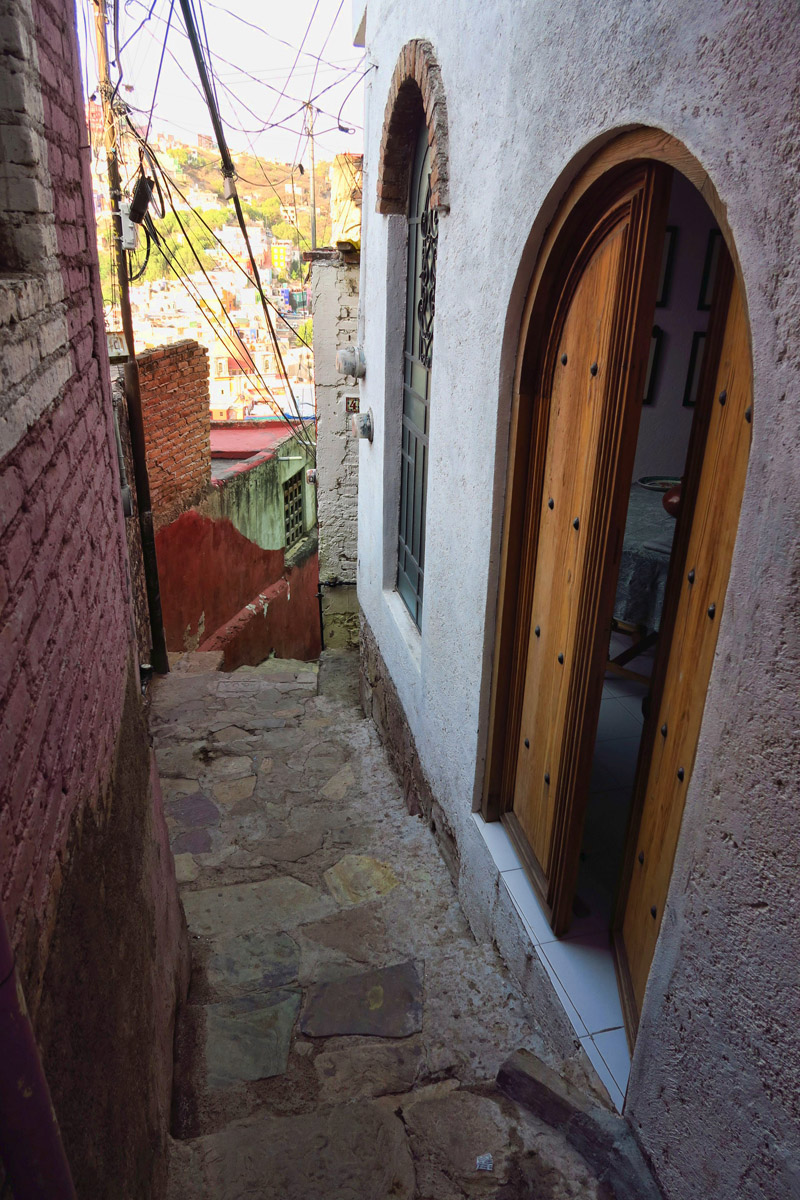 This is the front door of la casa where I am staying. Walk out and head down… 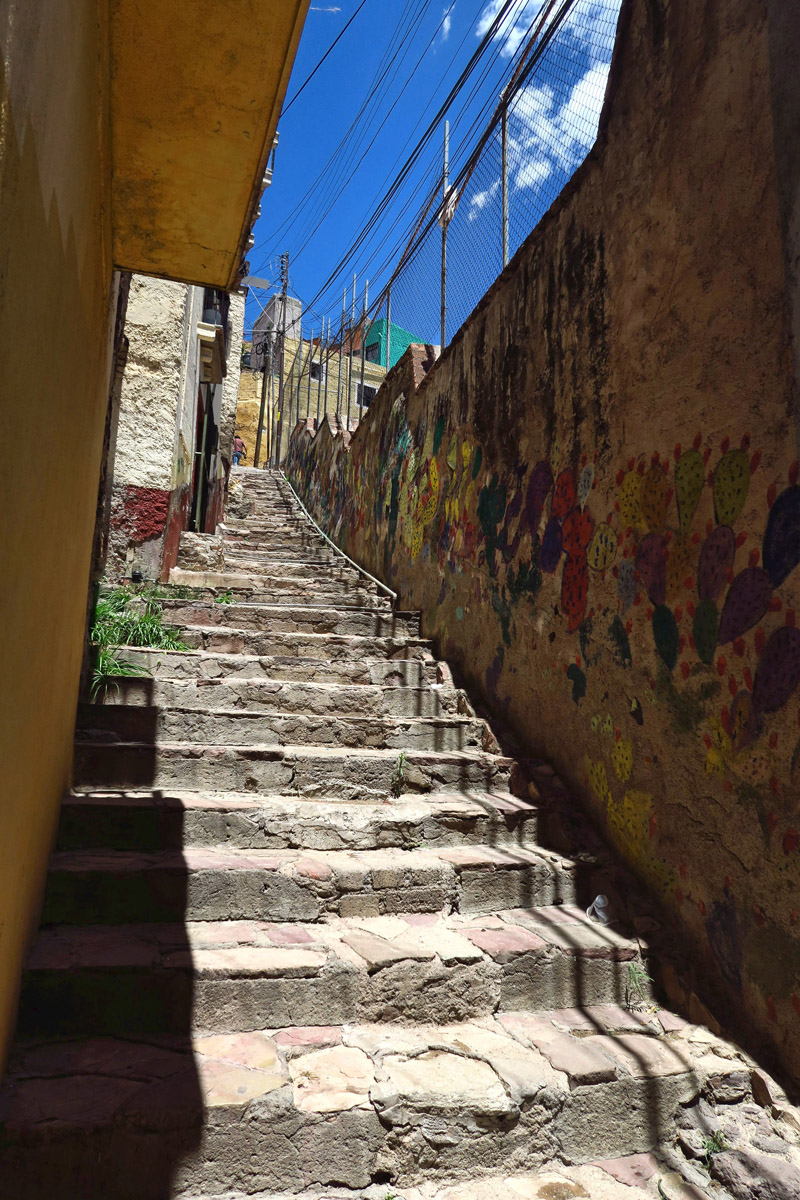 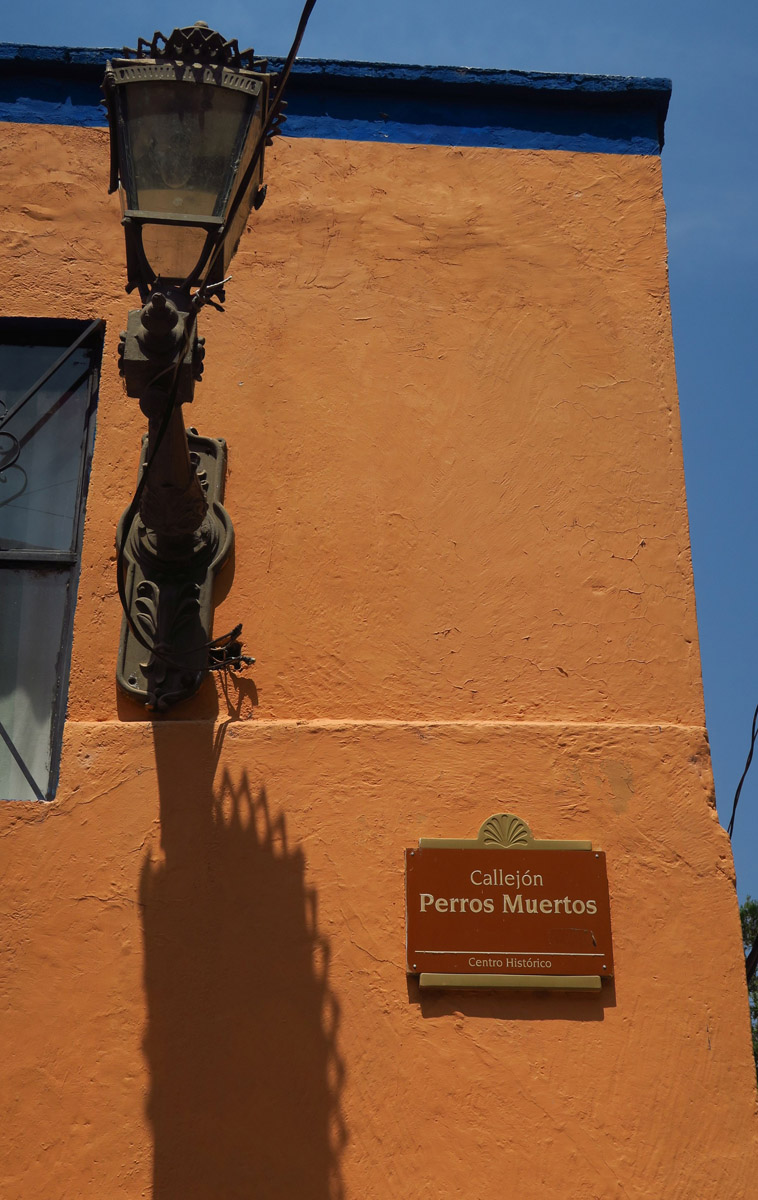 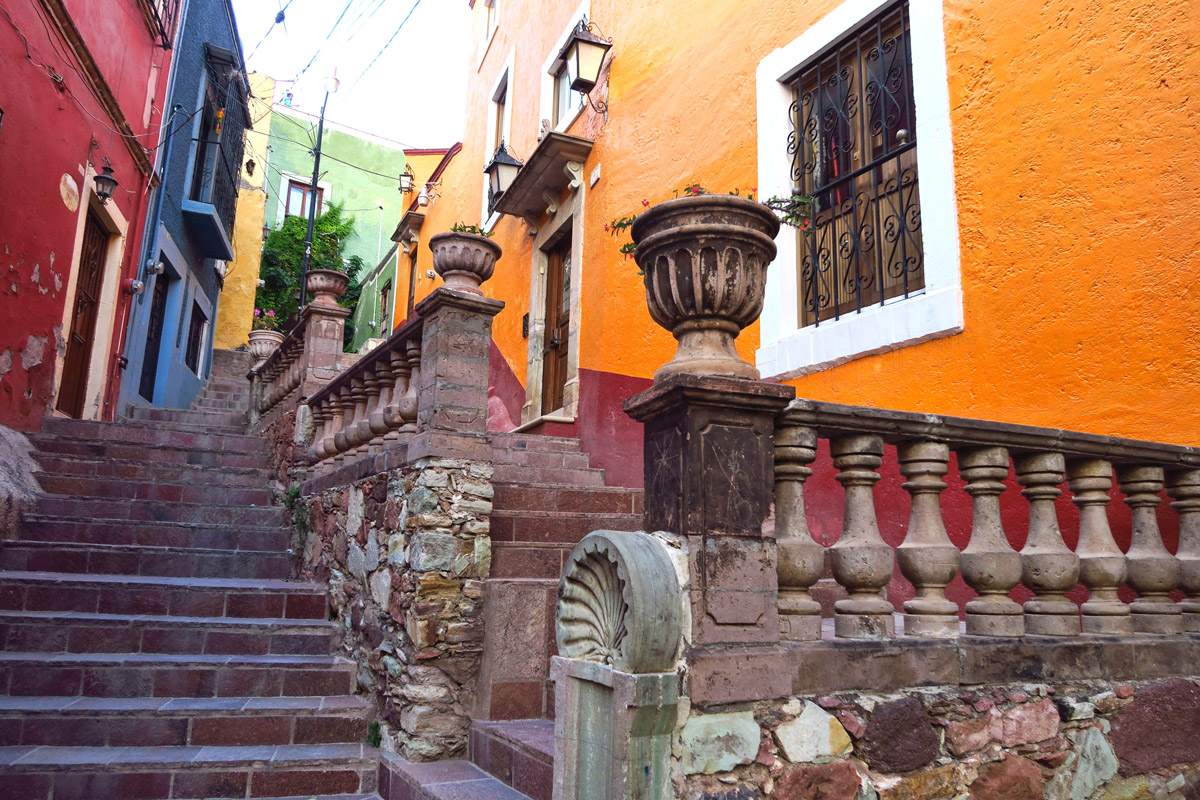 The easier section of my daily commute.

But no callejon is more famous than “Callejón del Beso,” or the Kissing Alley.  It’s probably one of the most famous tourist attractions in Guanajuato, particularly among the young romantics.  A kiss in the alleyway is said to insure 7 years of togetherness.  At only 60 inches across, it’s the perfect setting for Mexico’s version of “Romeo and Juliet” with the predictable tragic ending where ill-fated love is extinguished as the secret lovers were discovered.   Having disgraced her family, the Mexican Juliet was stabbed by her father while her hand was still clasped in the hands of her lover on the opposing balcony. 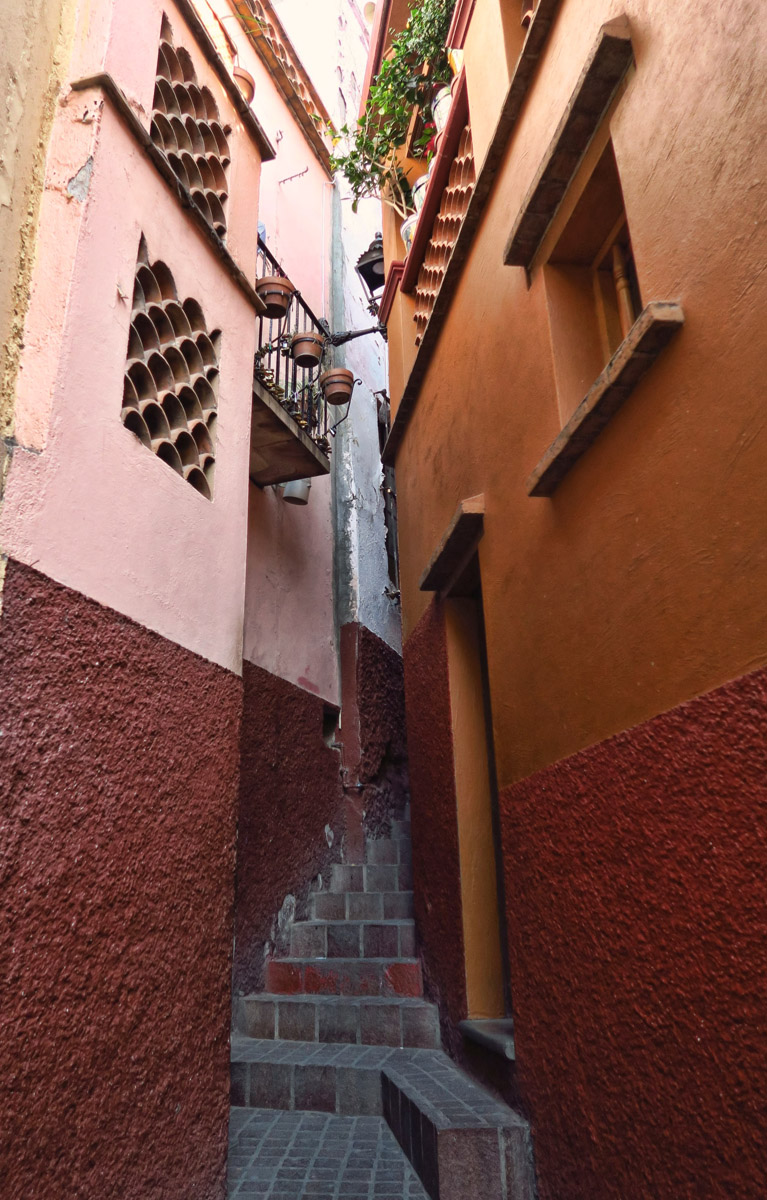 Callejón del Beso, or Kissing Alley. Stand on the red painted step and kiss for seven years of togetherness.

The casa where I am staying is located about three fourths of the way up the hill toward the Panoramica.   It’s the epitome of “vertical living,” as I must either climb up the remaining quarter of the way to the main road, or down a staircase of over 200 steps to reach a bus or taxi.   Stepping out the front door for anything more than a soda from the tiny tienda next door means a commitment to climb back up.  And at an altitude of over 6,000 ft, one thinks long and hard before they “pop out for a pizza.”   And speaking of pizza, this is one of the more remarkable aspects of adaption in this city….you can have it delivered!   Up all 200 stairs!   Since all items from lettuce to luggage must be carried up or down the steep staircase, I’ve gotten into the routine of bringing up one to two items each trip, whether I need them or not.   I often think about the life of a carpenter ant, as he hauls his house, piece by piece up the hill…

It’s taken me a couple of weeks to muster up the nerve to brave the bus system.  More advice comes from Don, “Don’t even think of looking for a bus route map or schedule.  They don’t exist.”   It costs 5 pesos to ride across town, about a quarter.  Approximate scheduled stops are scribbled in the windshield in white paint so one can get an idea of the general direction.

My first adventure on the Guanajuato bus is to ride to the nearby suburb of Marfil with new friend Vivian.  As we are bumbling along in the school bus-style vinyl bench seats, a warm breeze blowing through the open windows, I remark to Vivian that this is my first Guanajuato City bus ride.  She asks “What do you think so far?”  to which I reply, “Surprisingly efficient!”   As soon as those words are out of my mouth, there is a loud explosion coming from beneath the bus.   We have broken a U-joint, immediately rendering the bus out of commission.   Another remarkable adaptation, without complaint or hesitation, everyone empties out of bus as if it were the final stop, each rejoining the mighty river of foot traffic as its tributaries spread out in all directions.   In Guanajuato, everyone eventually finds their way… 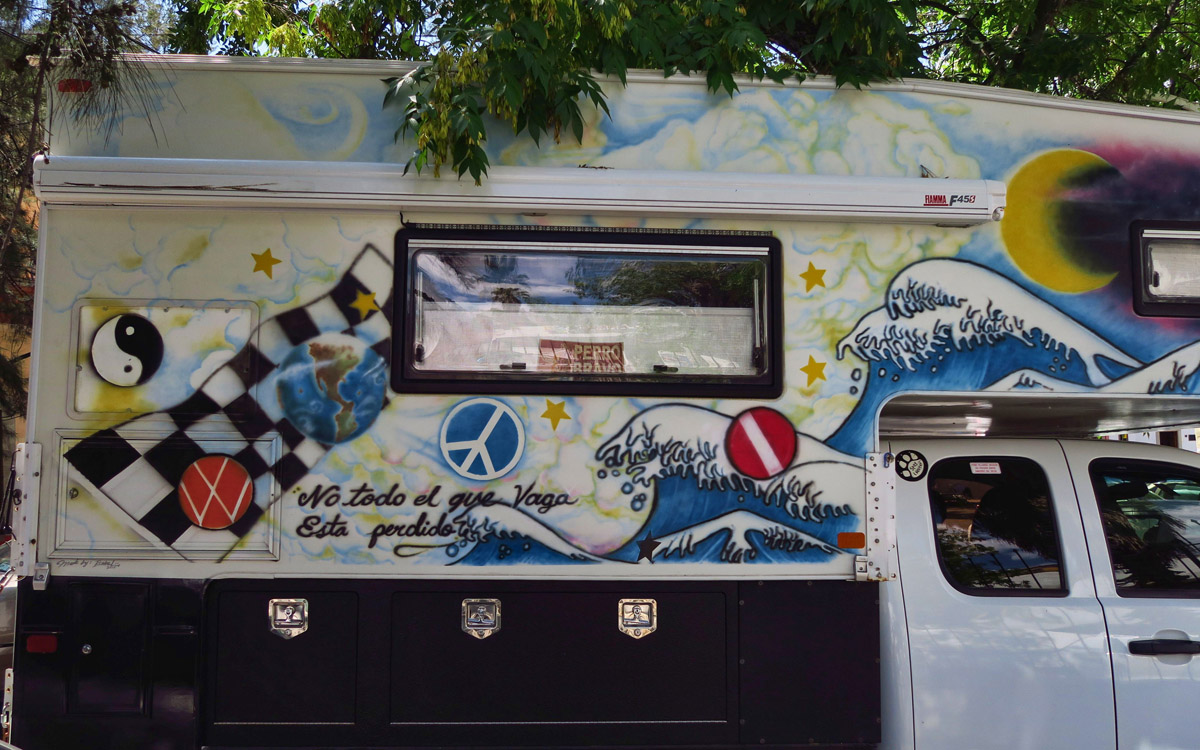 The side of a truck camper, parked on the outskirts of town. The slogan is Tolkien’s “All who wander are not lost” in Spanish. 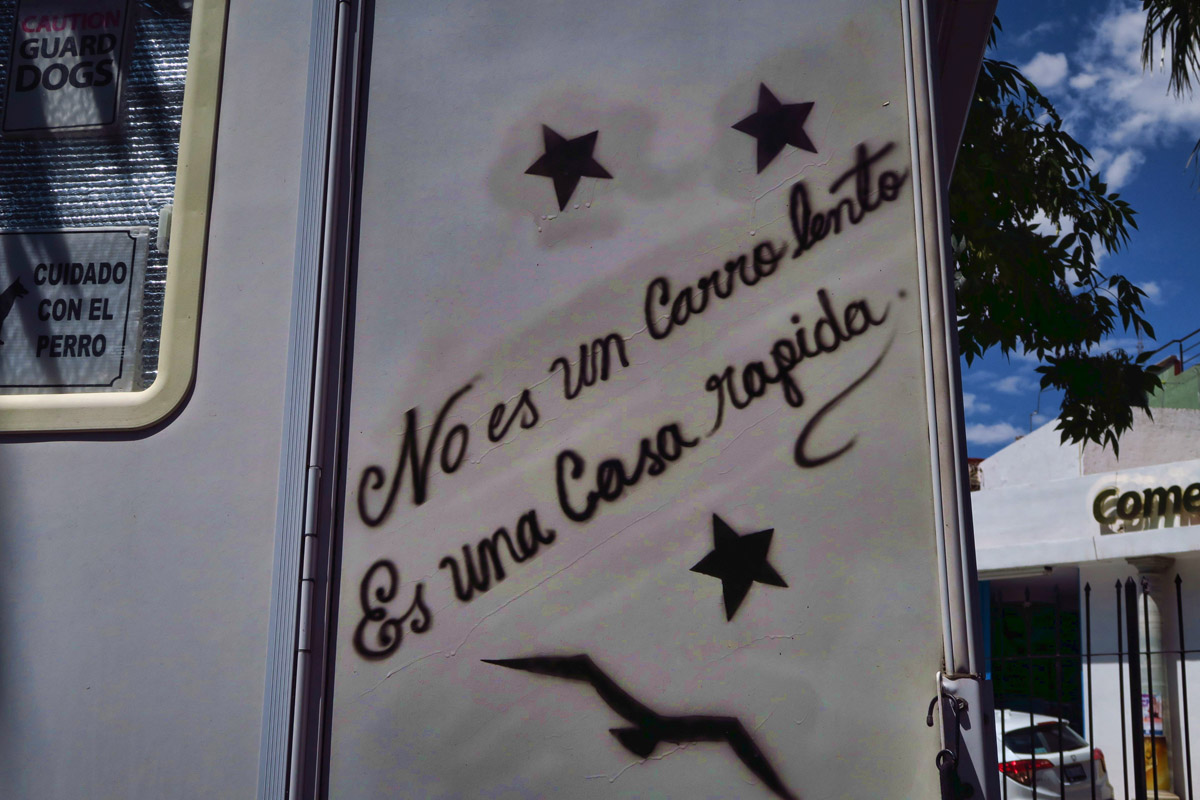 11 thoughts on “Finding My Way”