Sitting in Starbucks just inside the large floor to ceiling open wooden doors, I can hear two different mariachis bands battling it out in the Jardin, complete with dueling snare drum and cow bell.  A group of estudiantinas, strolling musicians like Pied Pipers, are conducting a sing-along at the end of the block.  There is a crowd following them, singing “Cielito Lindo,” the turn of the century song also known as the  “Ay, Ay, Ay, Ay, Canta ye No llores” song.  A woman in the chair adjacent to me is blasting “reggaton,” Mexico’s version of HipHop over her iphone at full volume, while notes of “light jazz” from the Starbucks intercom fill in the background.   It’s an insane cacophony of out of tune singers, out of sync musicians, and out of touch young Mexican hipsters.  Everyone seems impervious to the mounting din but me… 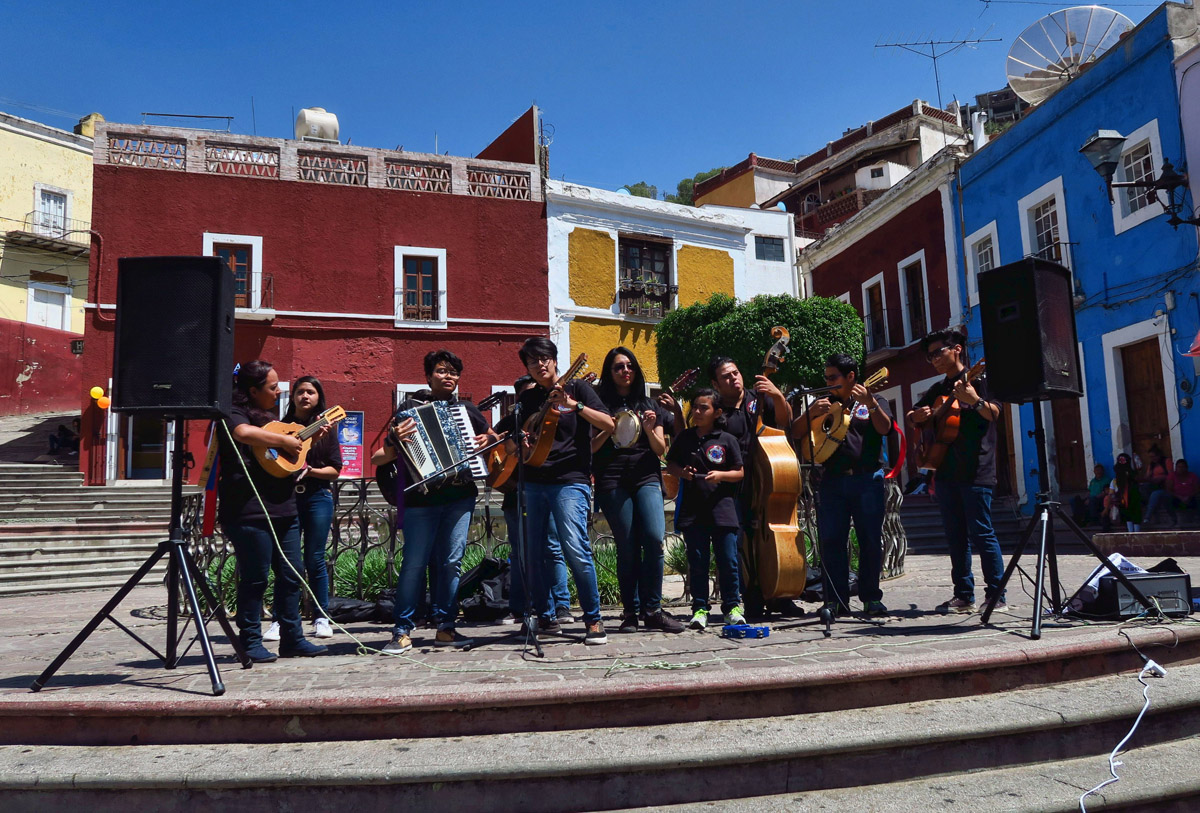 It’s very common to see local bands playing in the many small plazas around town. 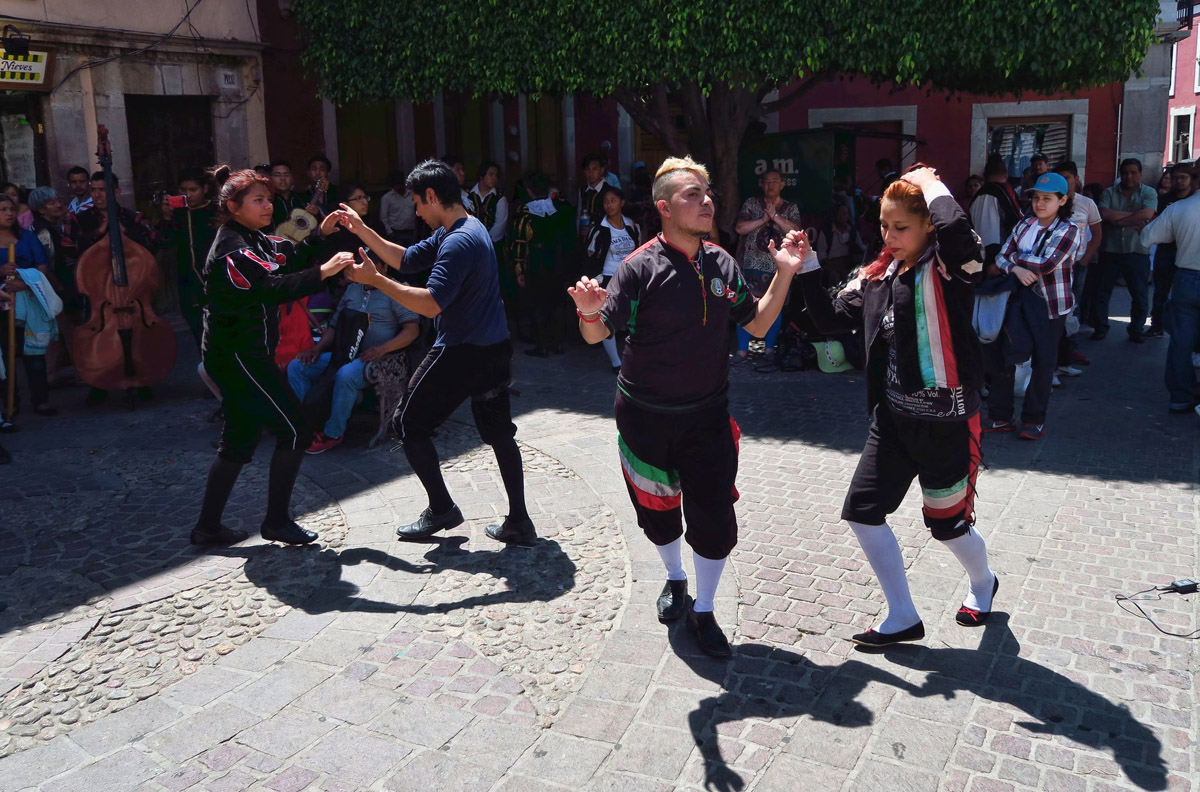 And where there is music, there is always dancing! 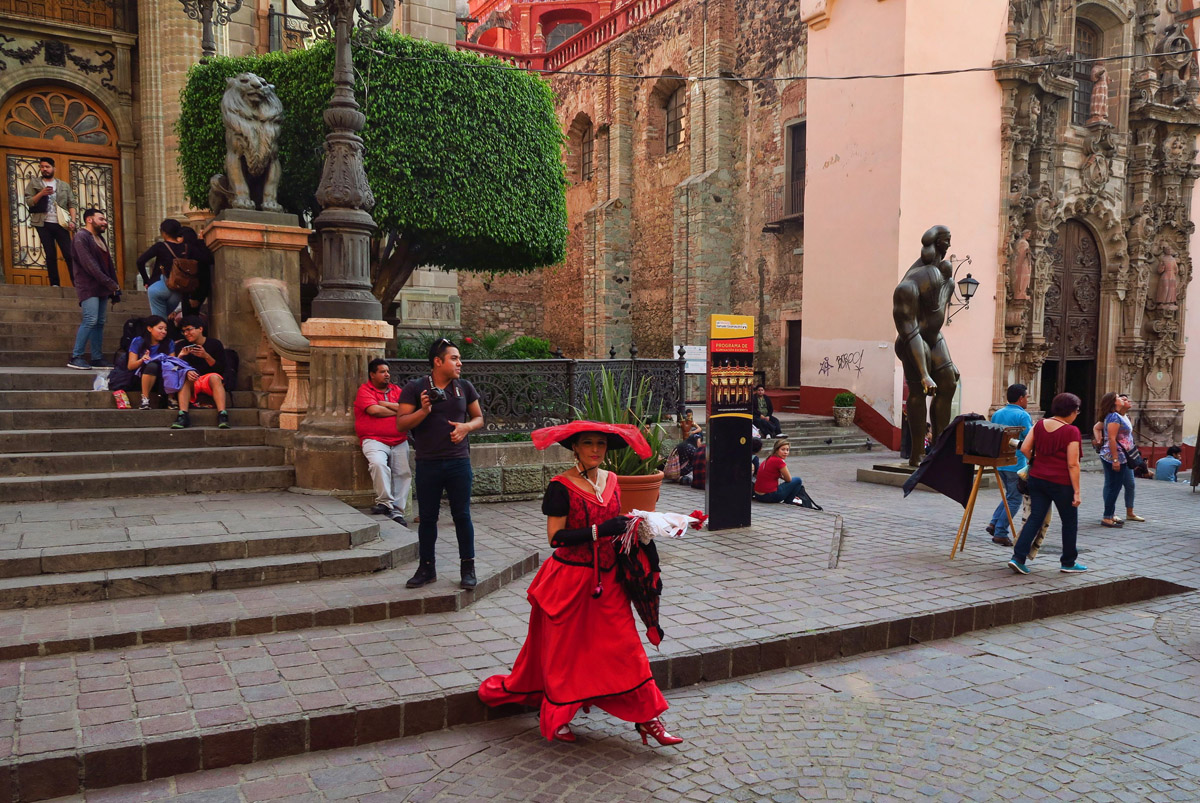 I’m not sure what’s going on here, but if you sit on the front steps of the Teatro Juarez for long enough, you will eventually observe some oddity… 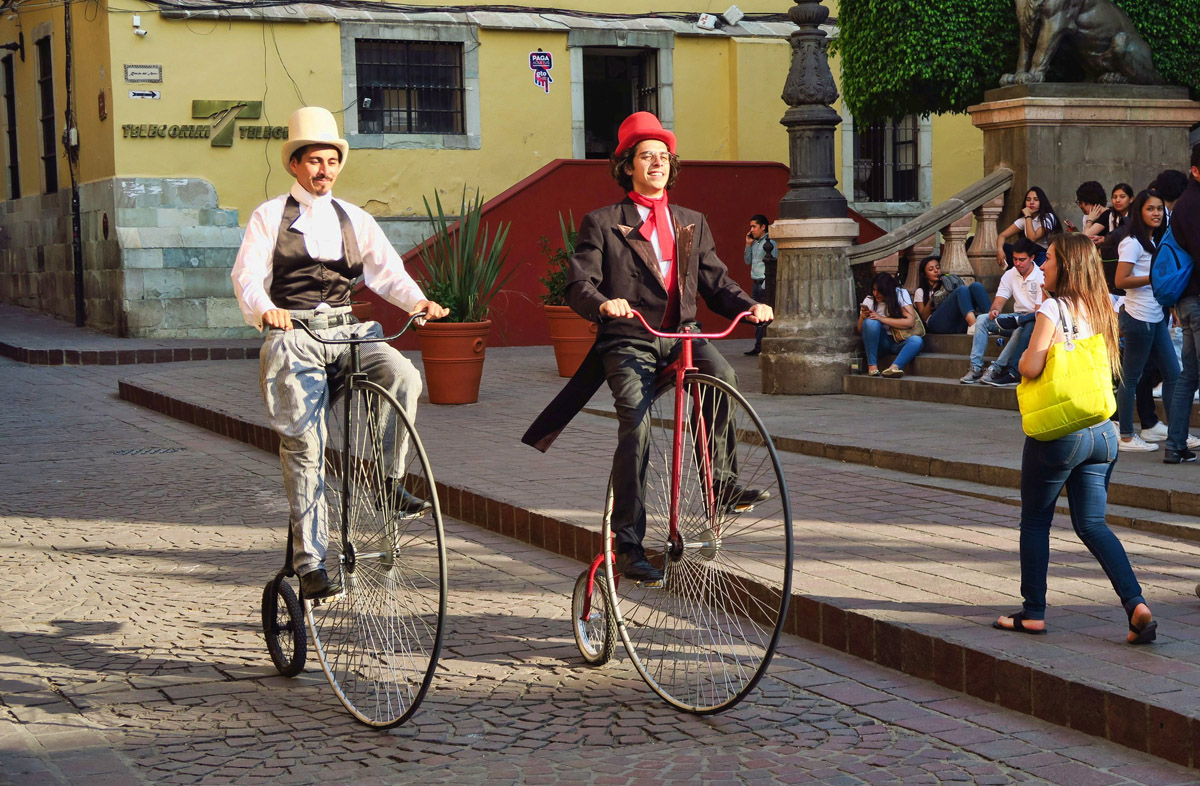 If you asked me to describe Guanajuato in one word, it would be difficult.  “Hilly” comes to mind, as does “colorful.”  But I guess the one word that speaks to my soul more than any here is “music.”  It’s always playing at any hour, whether in the streets or out the windows of the townspeople. 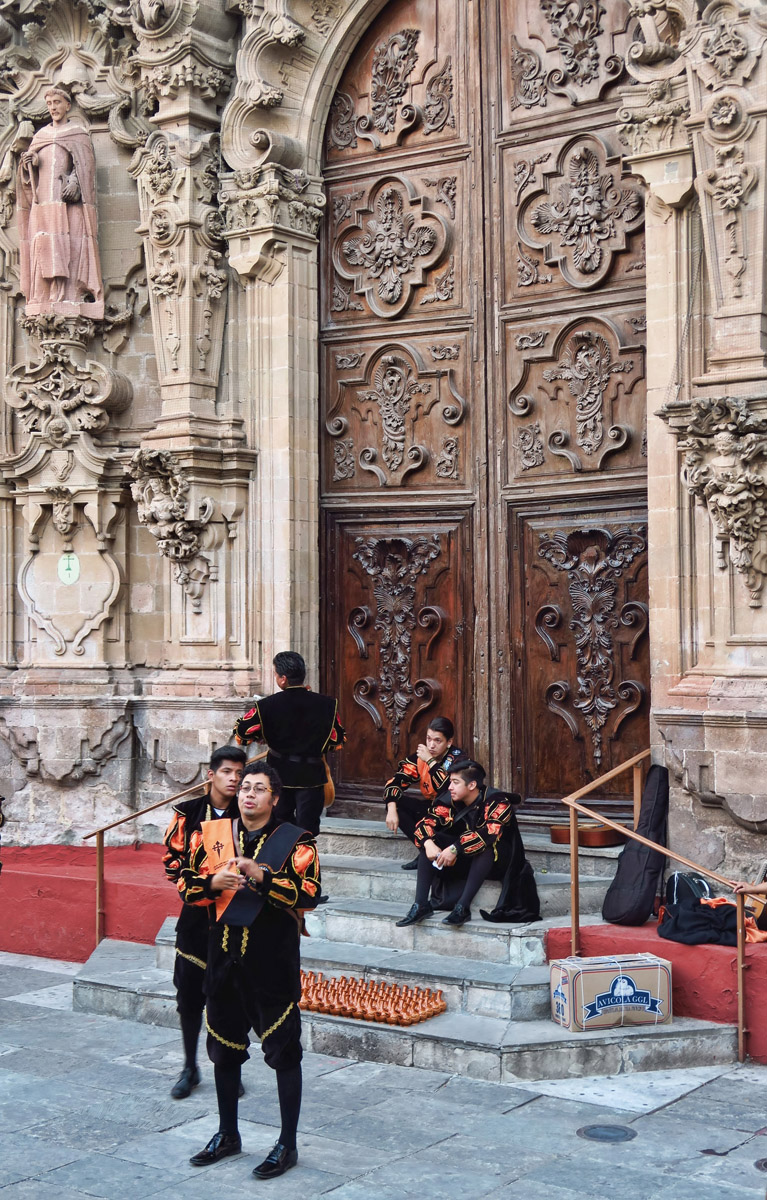 Group of period costumed students drumming up business for an “estudiantina” or strolling sing-a-long. 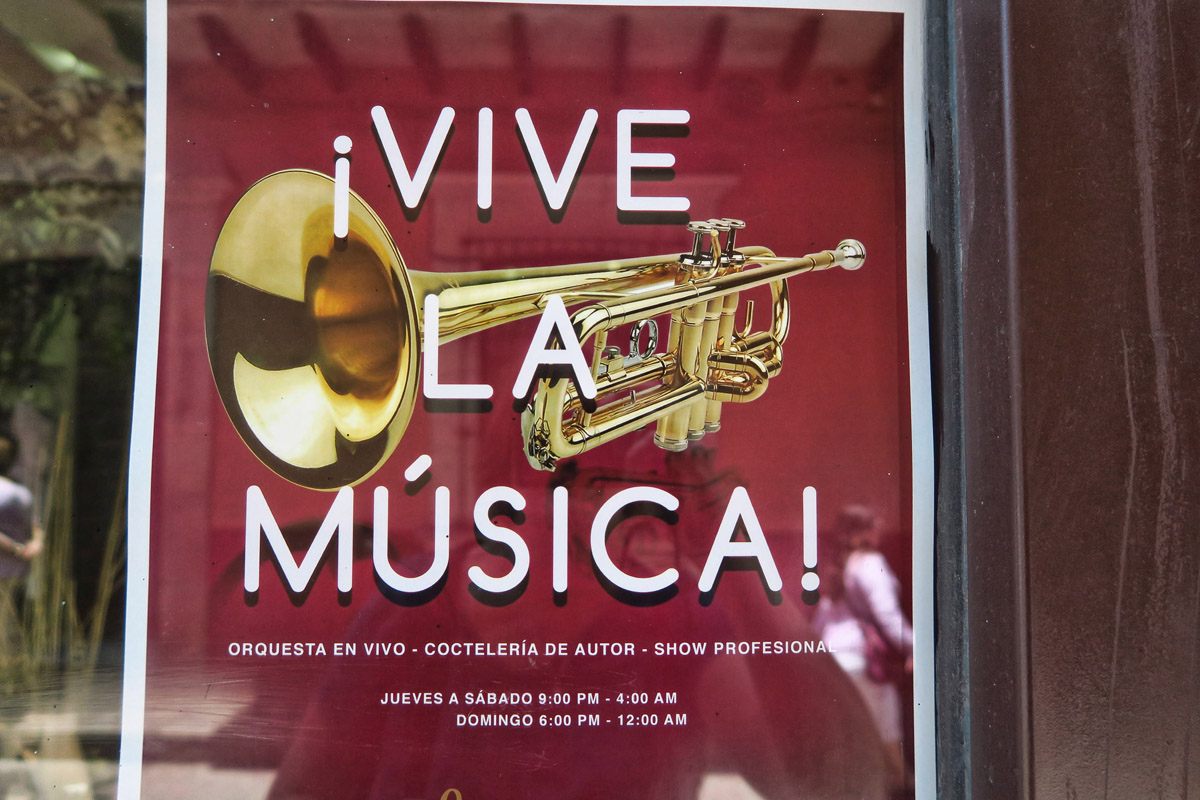 Check out the times on the flyer posted around town. Thursday through Saturday until 4:00am!!! 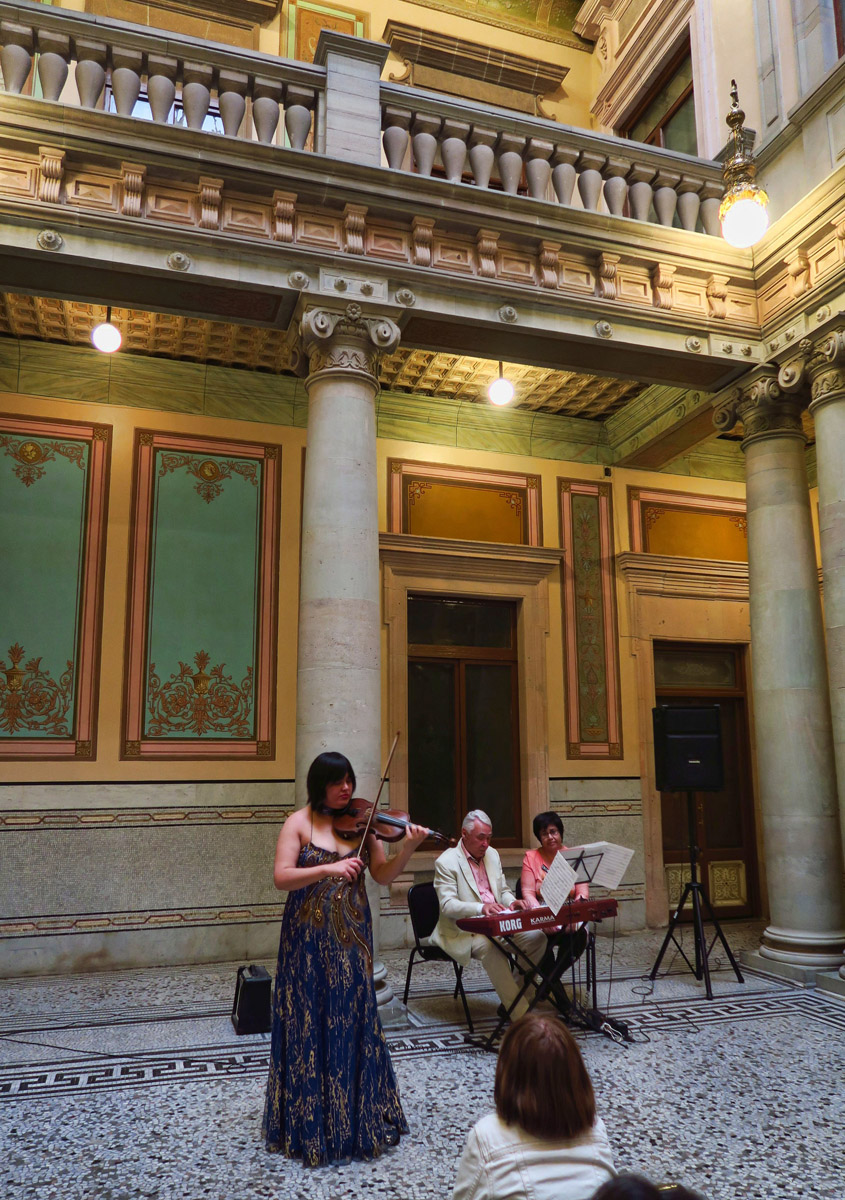 This concert featuring a lovely young soloist from the University is taking place in the museum lobby.

There’s a great “Meet-Up” site for Guanajuato which lists all upcoming events and their venues.   After following it for a couple of weeks, I decide I’m going to see how many musical events I can attend before I burn out.   There’s a solo violinist, a Russian student from the University who plays in the cavernous museum lobby one night.  Next comes a duo of classical guitarists in intimate concert in the lobby of one of the upscale B&Bs in the historic centro.  The third night is Andean music in the Plazuela de San Fernando.  And Friday night, the full University orchestra is playing Tchaikovsky in the beautiful Teatro Juarez.   Four nights in a row, and I cry “UNCLE!”    I give.   Music wins! 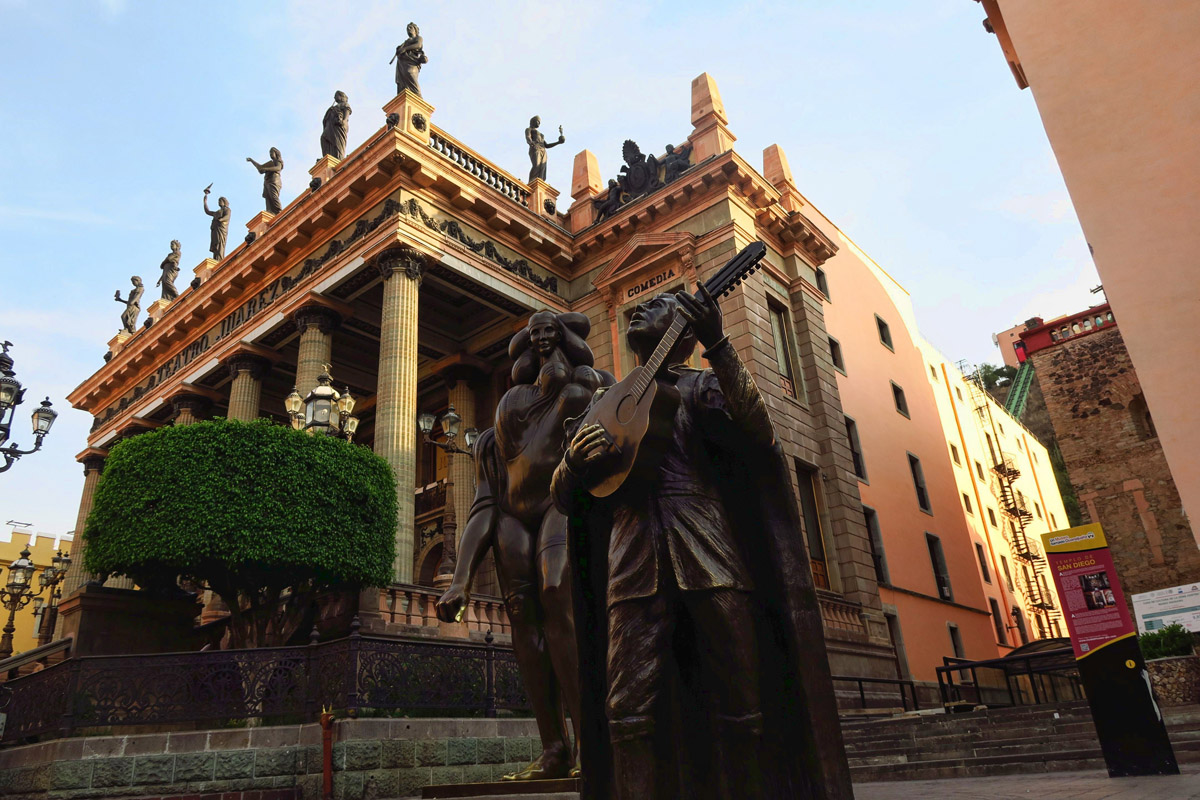 The beautiful Teatro Juarez, inaugurated in 1903. 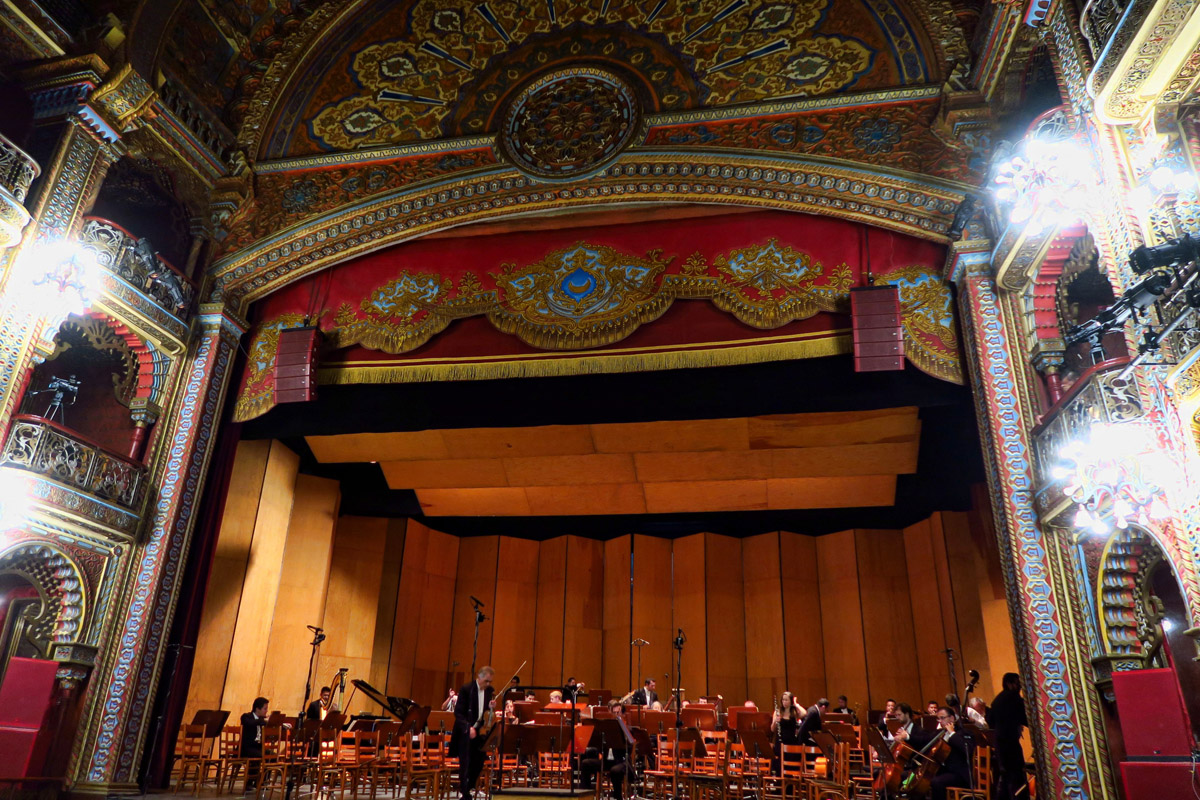 It’s open seating for the symphony, so you can sit anywhere. I sit on the main floor for the first act. 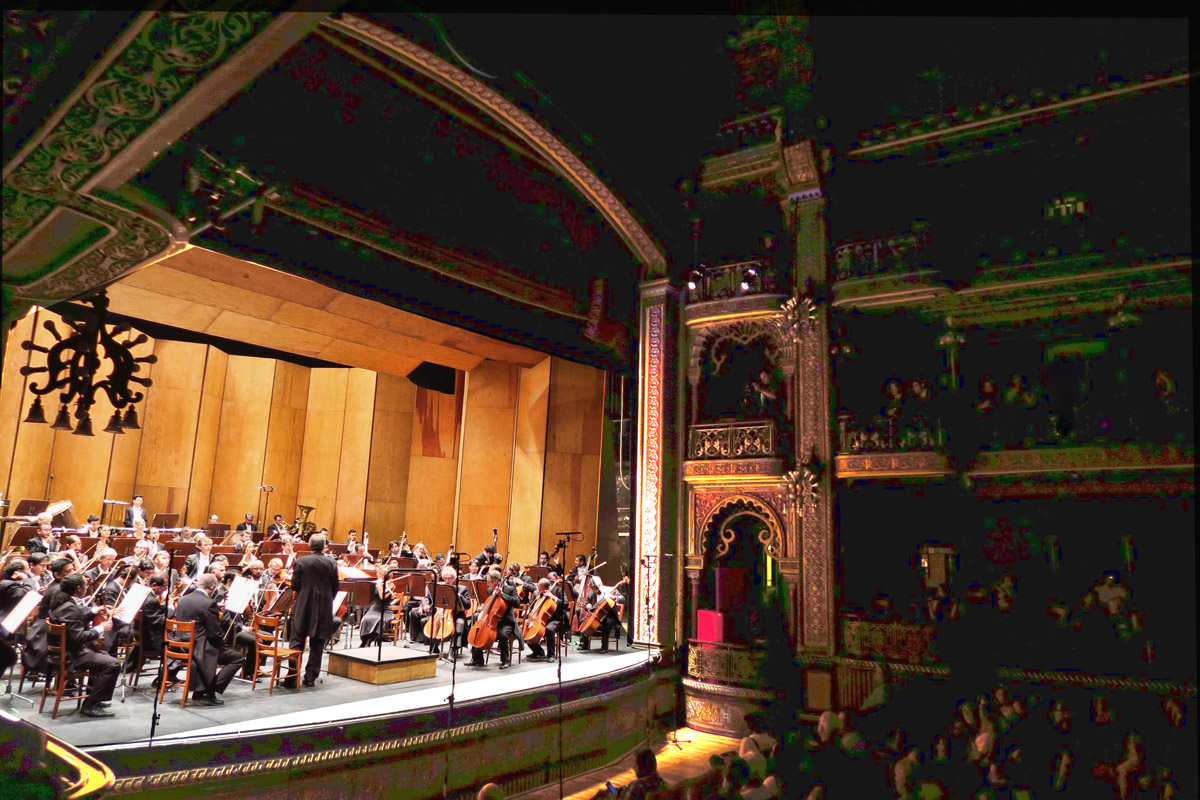 For the second act, I decide to try the view from a box seat.

Another word that could easily describe Guanajuato is “Museums.”   There are four in a row on one street alone!   I set my intentions to visit as many of these as possible while here.  The most historical, without a doubt is the Alhondiga, site of the first rebel battle of the Mexican War of Independence against the Spaniards, now turned Art and History Museum. 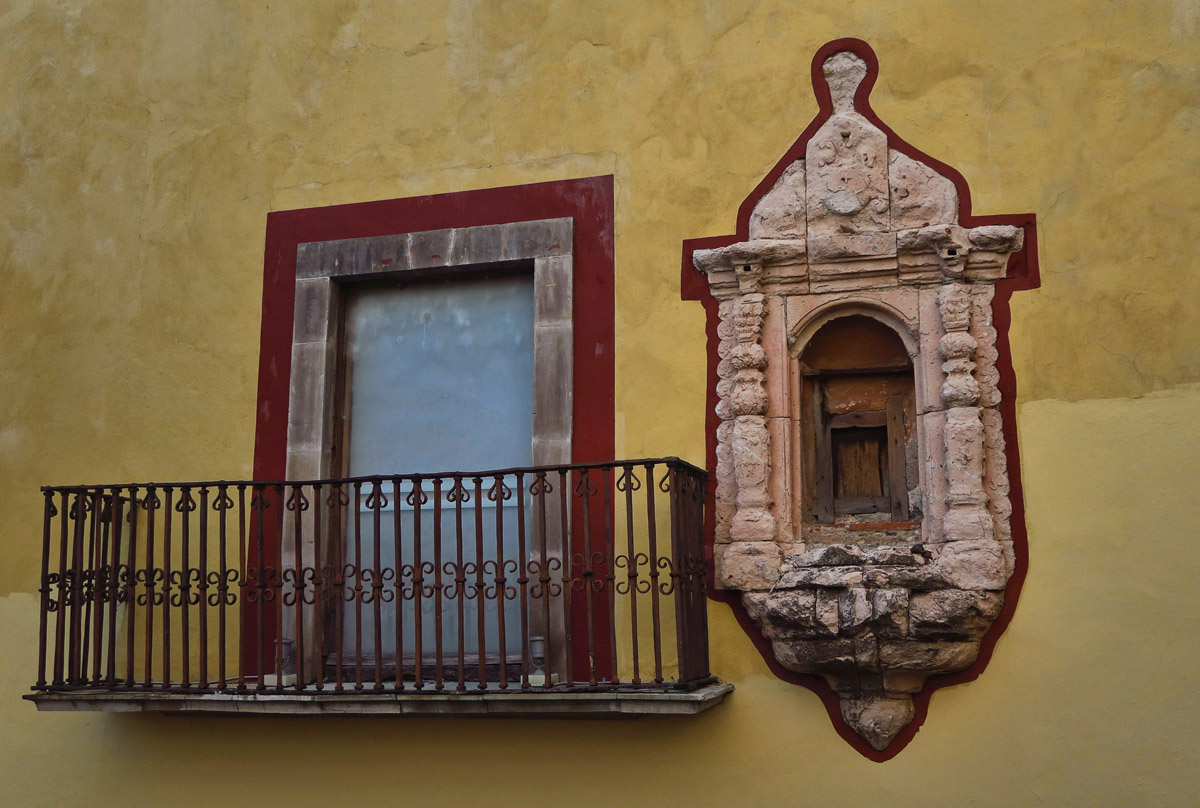 This niche on the side of the People’s Museum. Built of carved pink stonework, it dates back to the 19th Century. 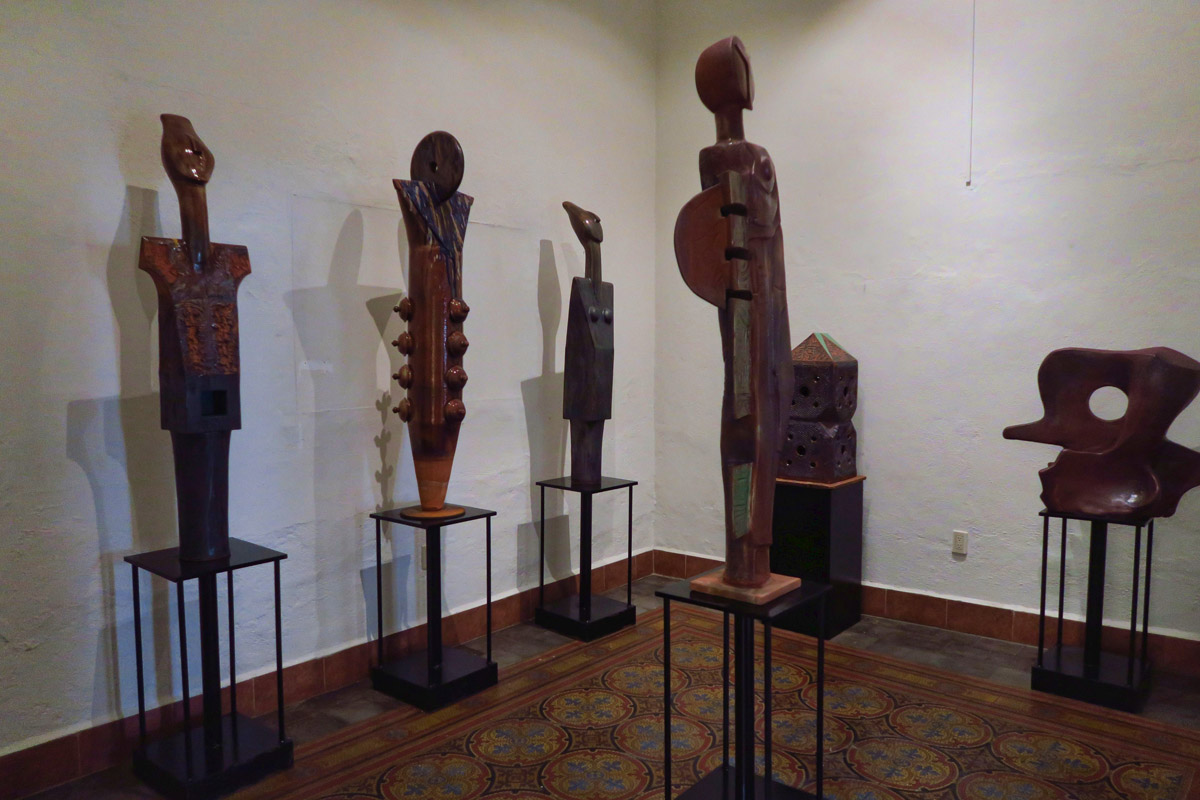 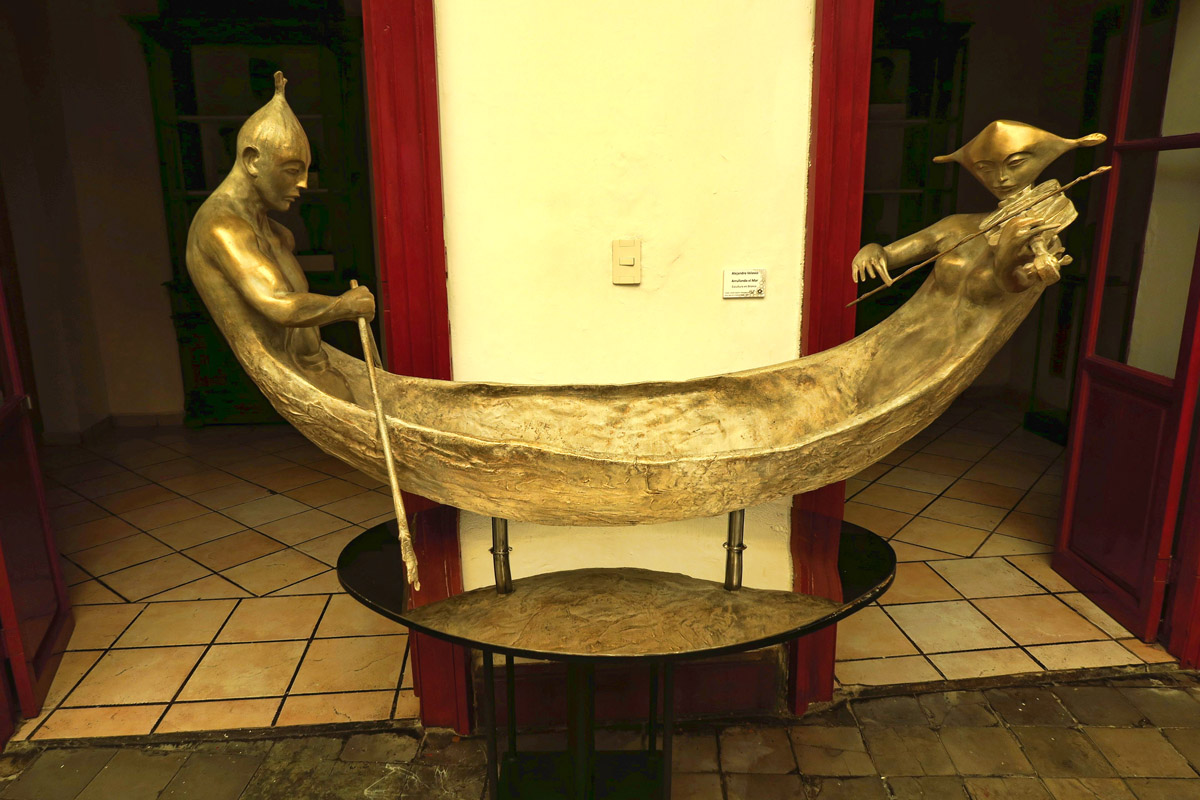 Even more famous is the macabre Museo de las Momias,” or museum of naturally mummified bodies from the 19th and 20th century, largest collection in the Western Hemisphere.  These 111 mummies came about as a result of a burial tax. When a new law required residents to pay a tax for perpetual burial, if survivors didn’t pay the tax, they exhumed the body and stored it in a building above ground.  When they exhumed these bodies, they had become naturally mummified from the dry climate and high mineral content of the soil.  People actually began to pay to see this in the 1800’s.   But I opt out of both of these museums for different reasons.  The Alhondiga is a bit on the pricey side as Mexico museums go…and the ticket for my camera would cost almost as much as my own price of admission.   There are no English subtitles here, so I decide to save my money for a time when my Spanish has improved.  And as for the mummies, well, I don’t need the weird vibes from a bunch of creepy shrunken bodies, no matter how old or well preserved. 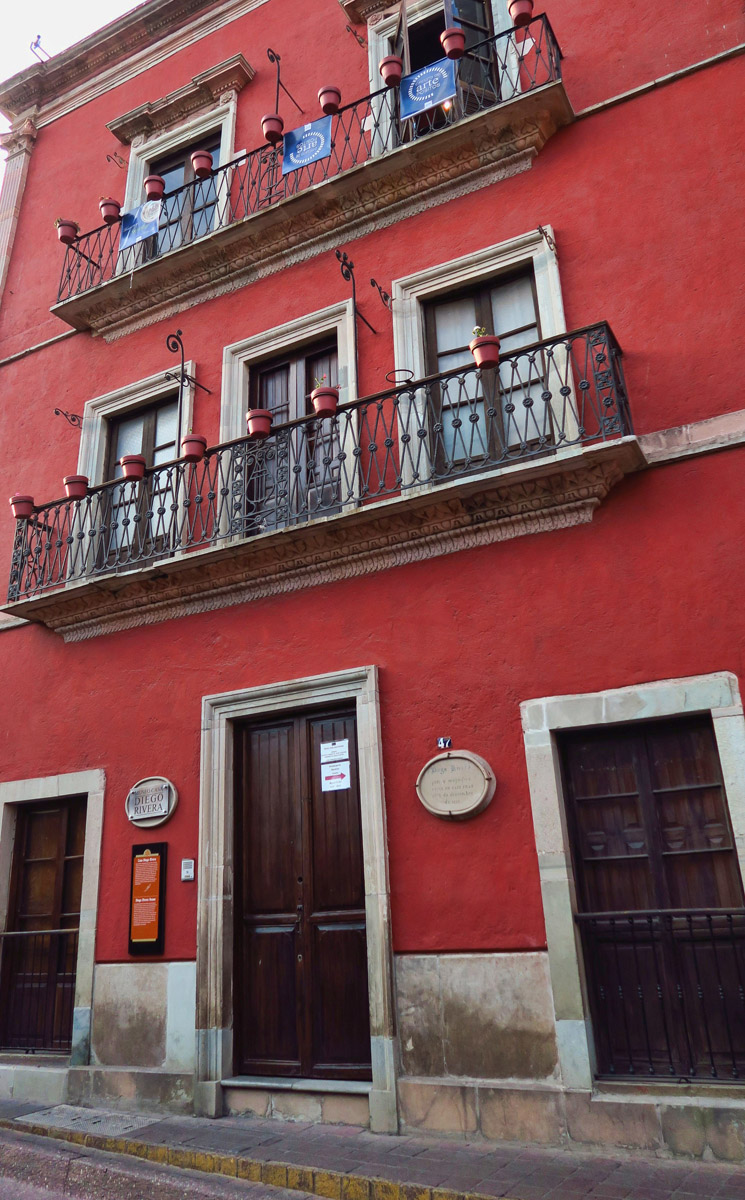 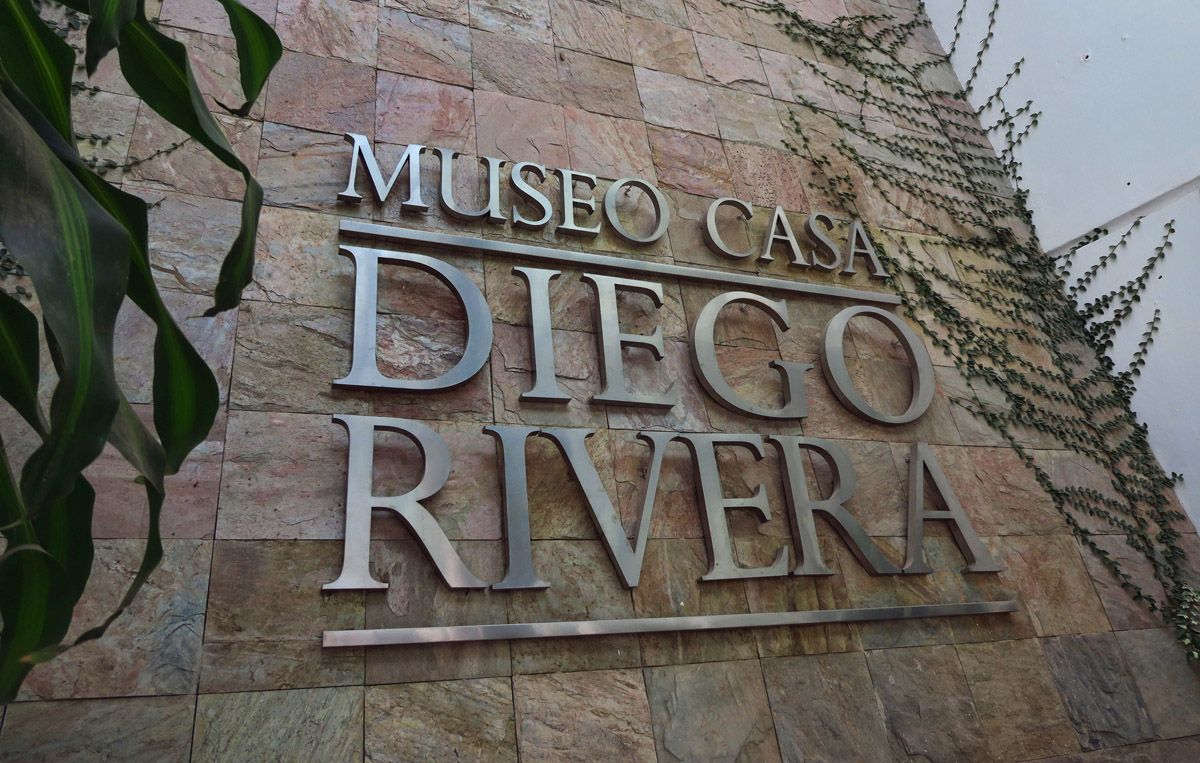 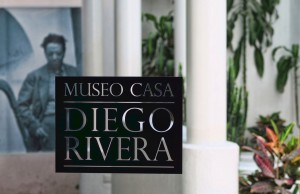 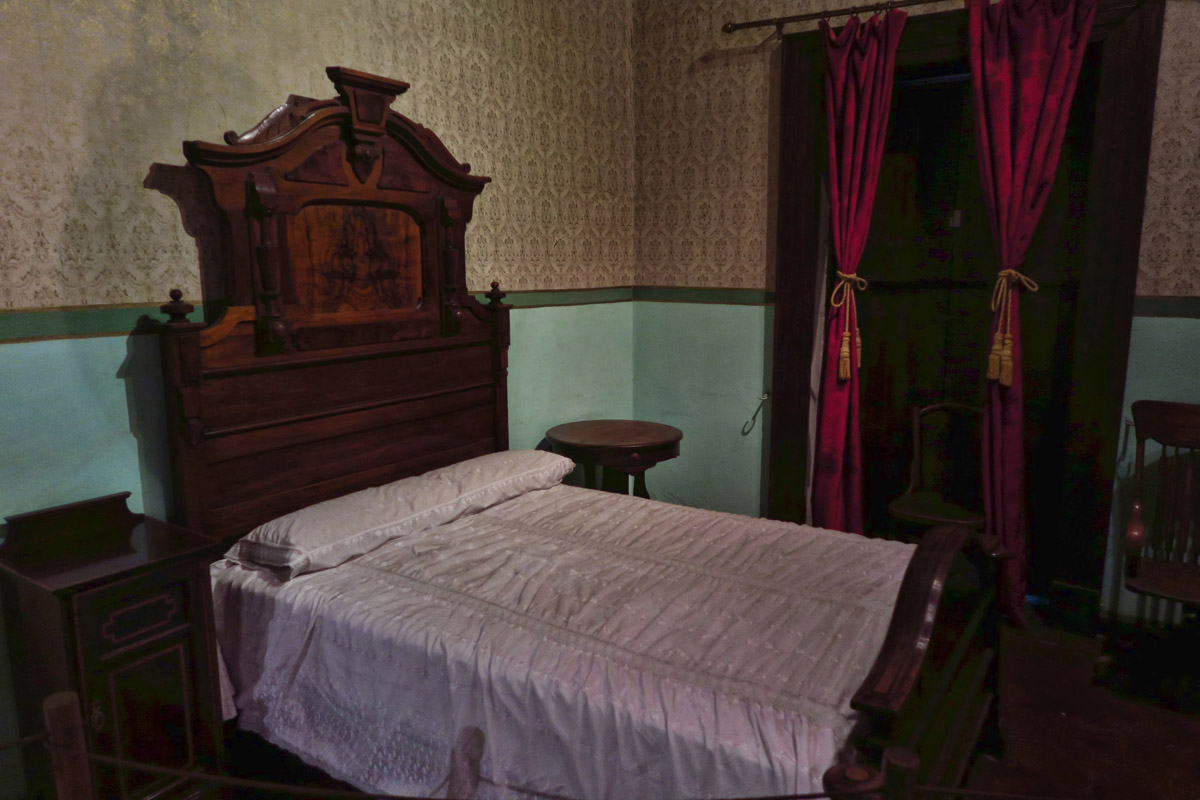 Diego Rivera was born in one of the first level bedrooms in 1886. 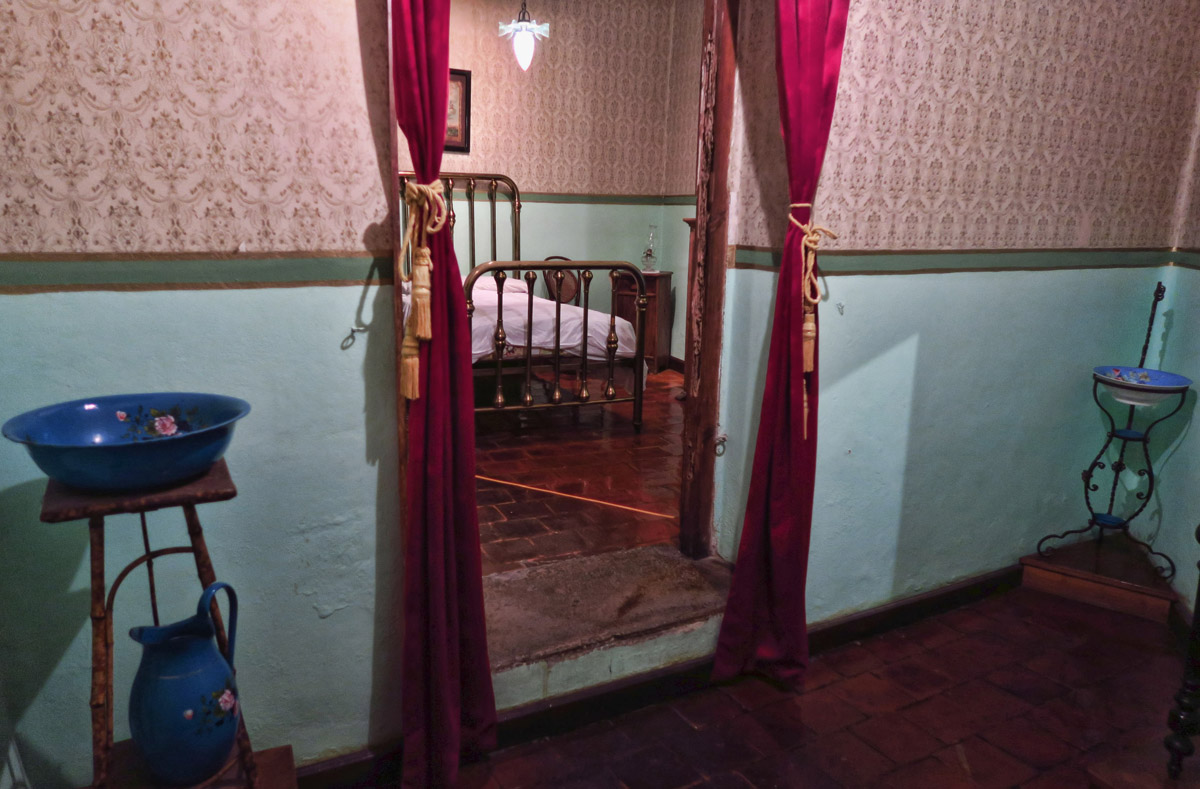 Although Rivera only lived here the first six years of his life, they credit it with the formulation of his creative years. It became a museum in 1975.

I do make time to visit what is likely the most popular museum among gringos, that of the husband of that most famous Mexican painter, Frida Kahlo.  Although Frida’s museum and house are in Mexico City, Guanajuato was the birthplace of her husband, Diego Rivera.  While Frida is likely more popular outside of Mexico, Diego Rivera is revered as one of Mexico’s finest artists, credited with beginning the muralist movement. 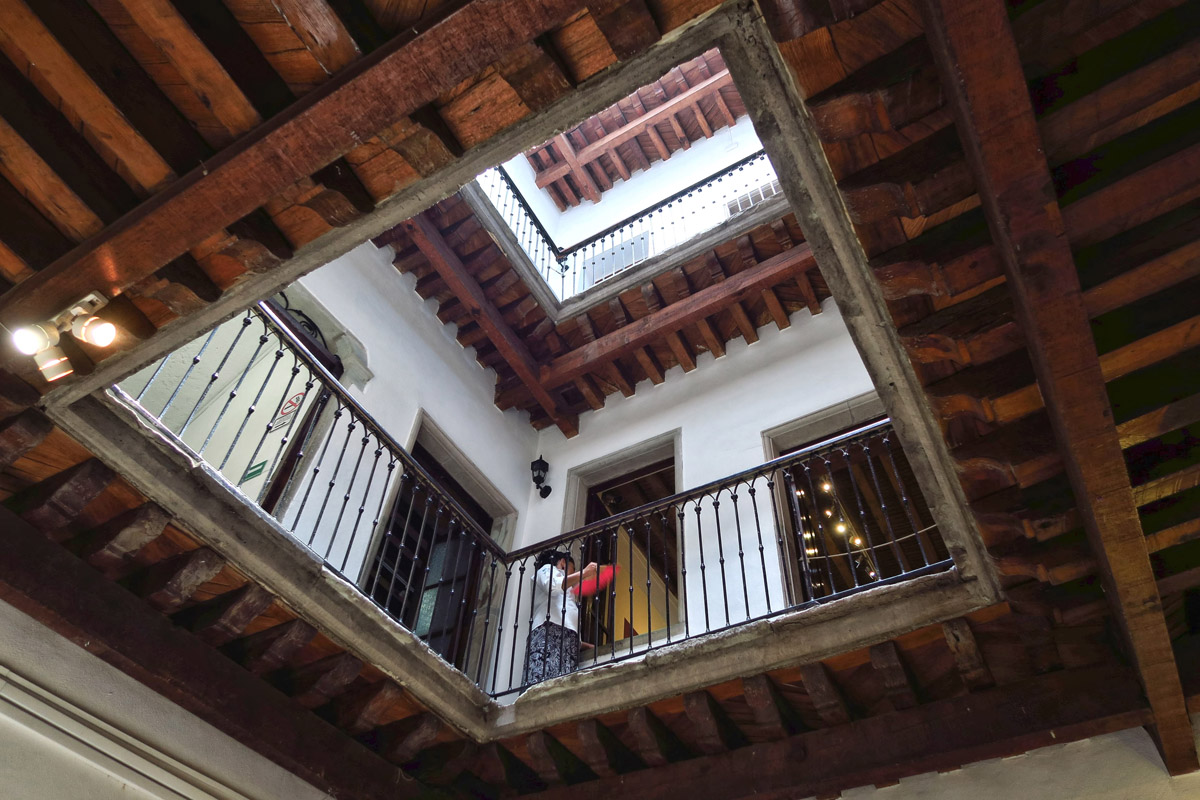 Museum is multi-level, with period rooms being on the first floor, Rivera’s artwork being on the second, and temporary exhibits on the third floor. 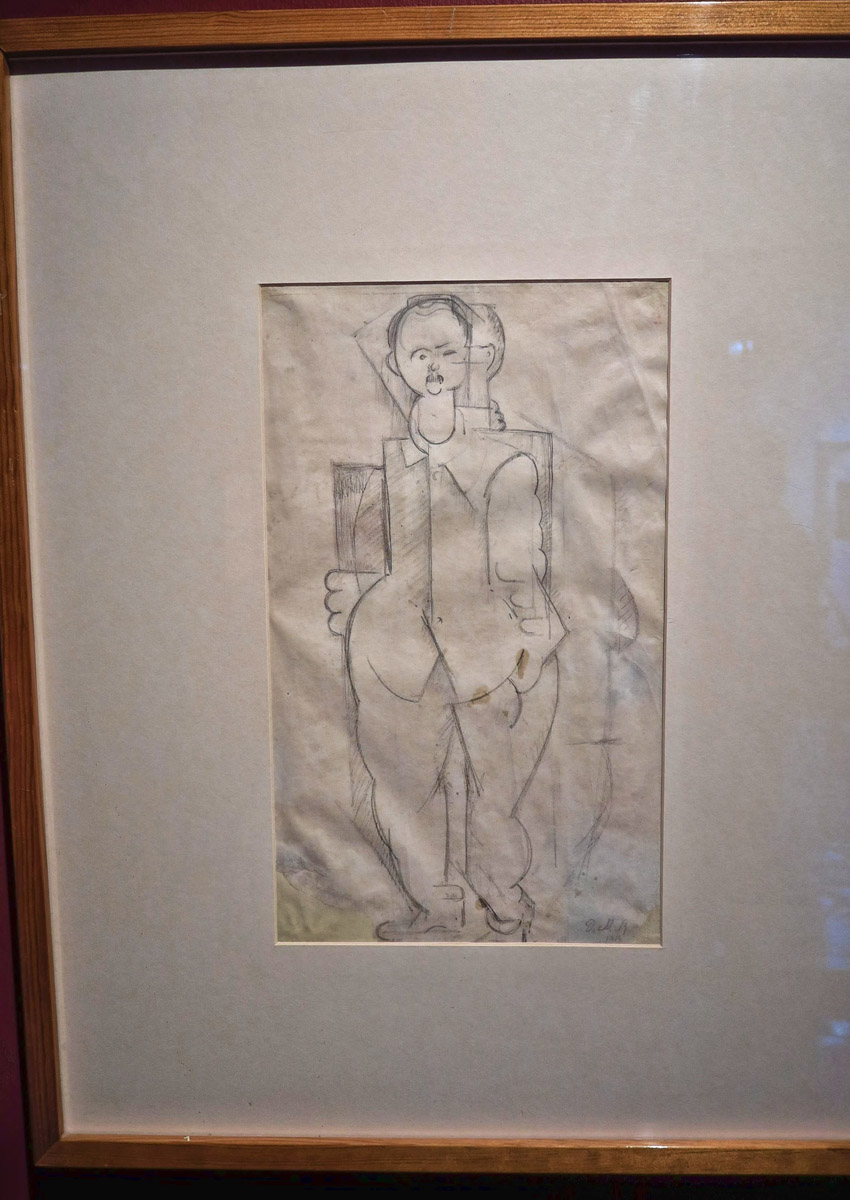 Rivera’s “cubism” period which was at its height from 1913 to 1917. Picasso was very influential on Rivera. 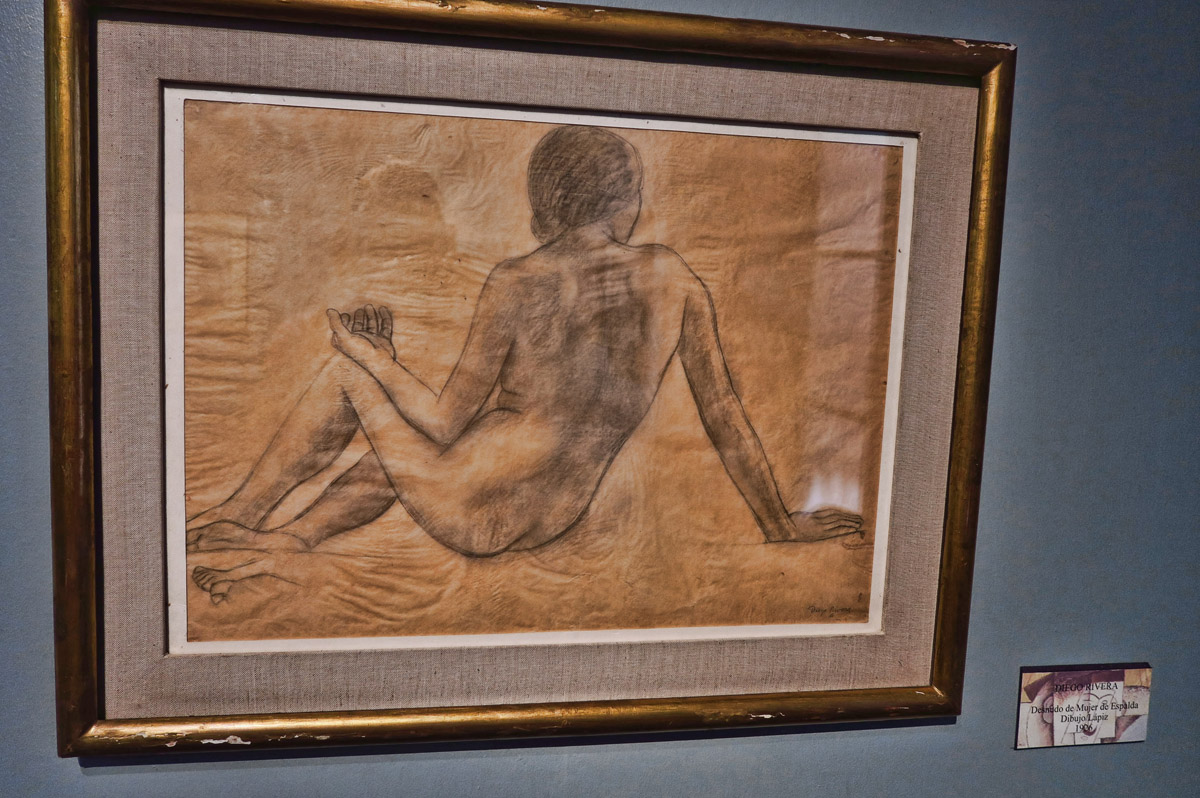 Frida? Or one of his many other muses? 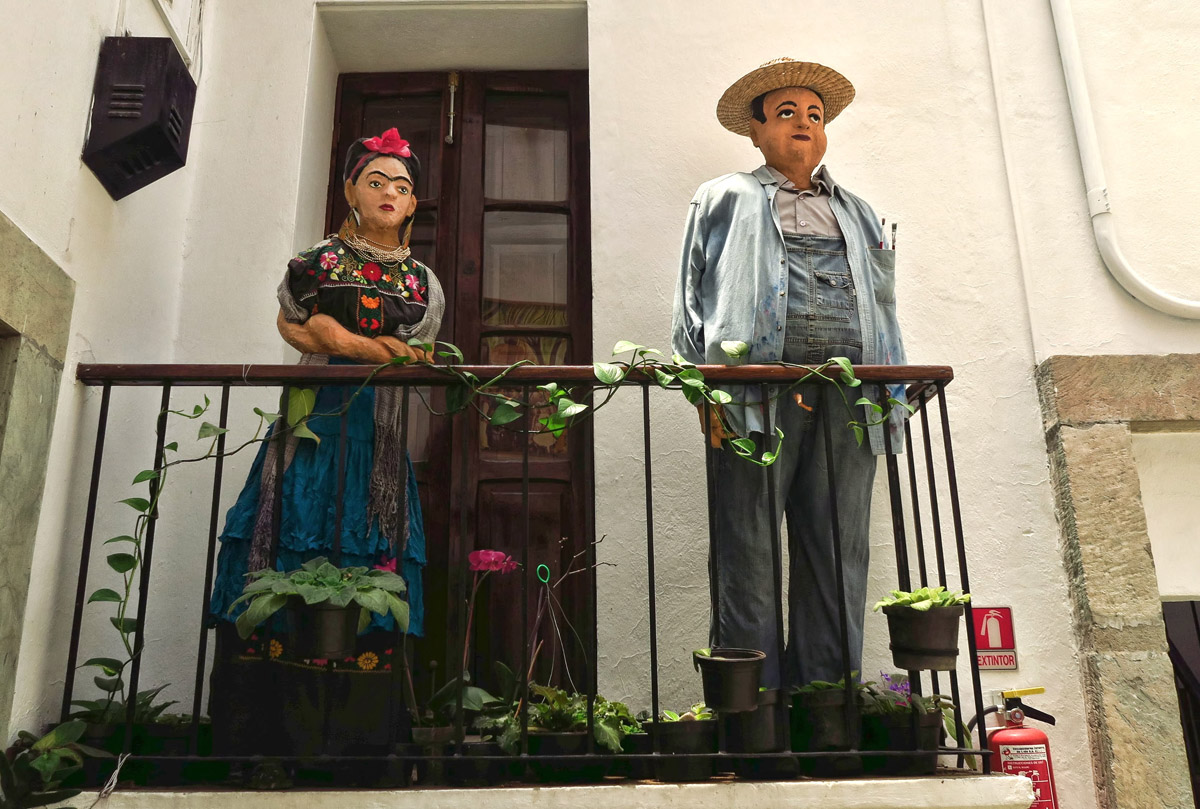 But no museum has more significance in Guanajuato than that of Miguel de Cervantes, author of Don Quixote, namesake for the city’s largest festival.   Since the 1950’s, the Festival International Cervantino, born out of Cervantes one act plays, is now one of Latin America’s foremost arts events. Come two weeks in October, over 200,000 visitors descend on Guanajuato to attend this music, dance, and theater festival, all for the love of the arts…and one author and his El Ingenioso Hidalgo Don Quixote 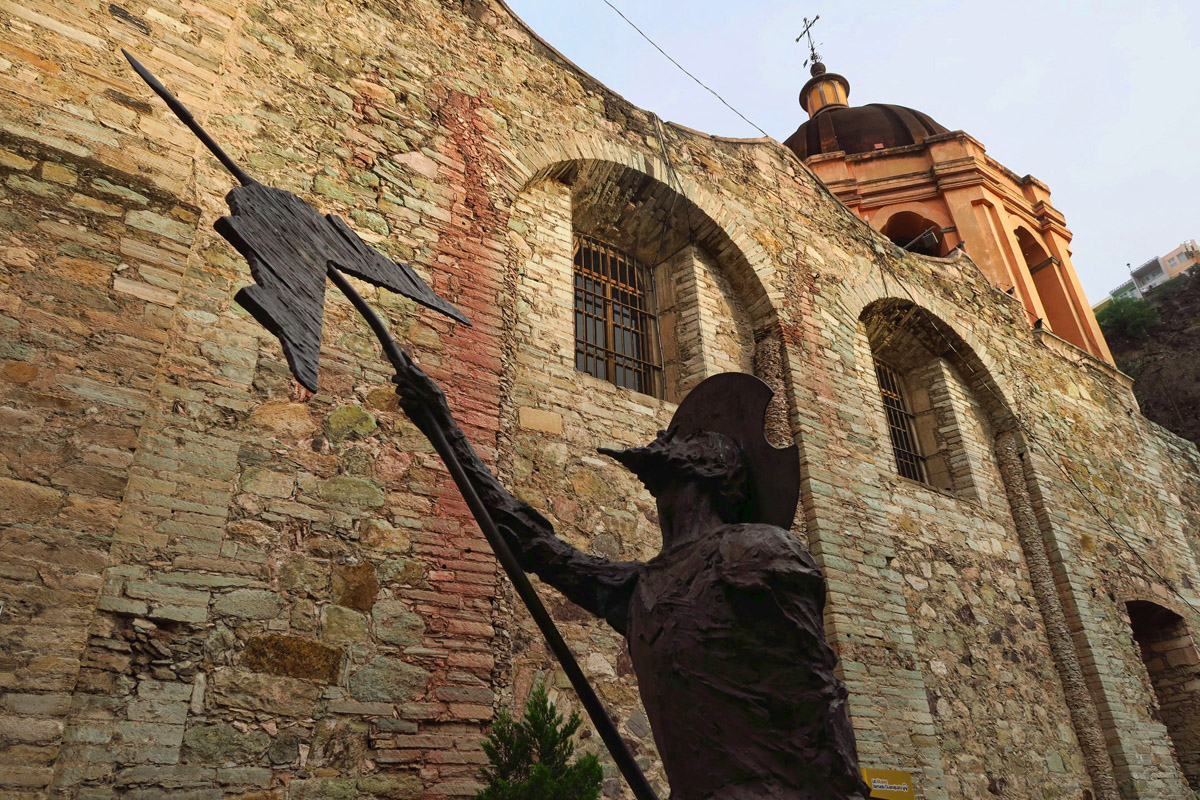 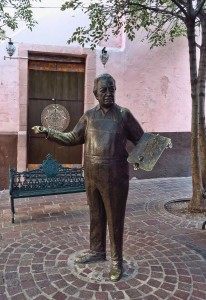 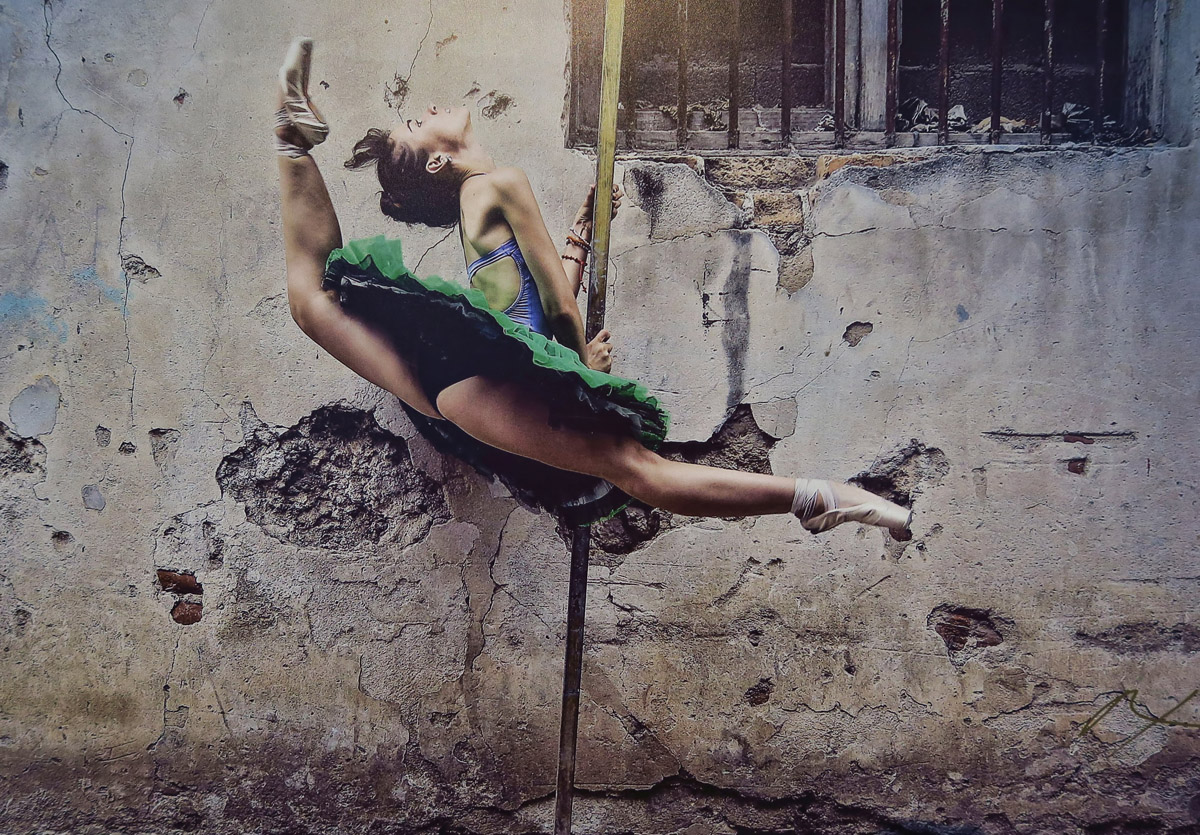 Temporary exhibit on the third floor of the Diego Rivera museum…photographs of ballerinas in Havana, Cuba.

Music and an unwavering dedication to the arts are common all over Mexico, where one can hear laughter and merrymaking wafting from inside bars, private homes and rooftops on almost every corner of every town.   But the difference in Guanajuato is, all those festivities and merrymaking are taking place on the OUTSIDE!    On any given day, there’s a party taking place on the Teatro steps, in the Jardin, or one of the many small plazas throughout Centro…and everyone is invited.

“Where there’s music there can be no evil”  ~ Miguel de Cervantes Saavedra, Don Quixote

Note:  Click HERE for a video of Guanajuatos’ strolling musicians leading one of the nightly “Estudiantinas.”