Continuing with my loose strategy to get north as quickly as possible before the icebergs melt, I am headed straight up the Northern Peninsula with as few stops as possible…with one exception.   The Trans-Canada Highway passes right through the heart of Gros Morne National Park.   The most notable highlight of this national park is the Western Pond Brook Tour.  This two-hour boat ride across a glacially carved, fresh water lake can only be reached by a “two-ish” mile hike to the boat dock at the edge of the pond. 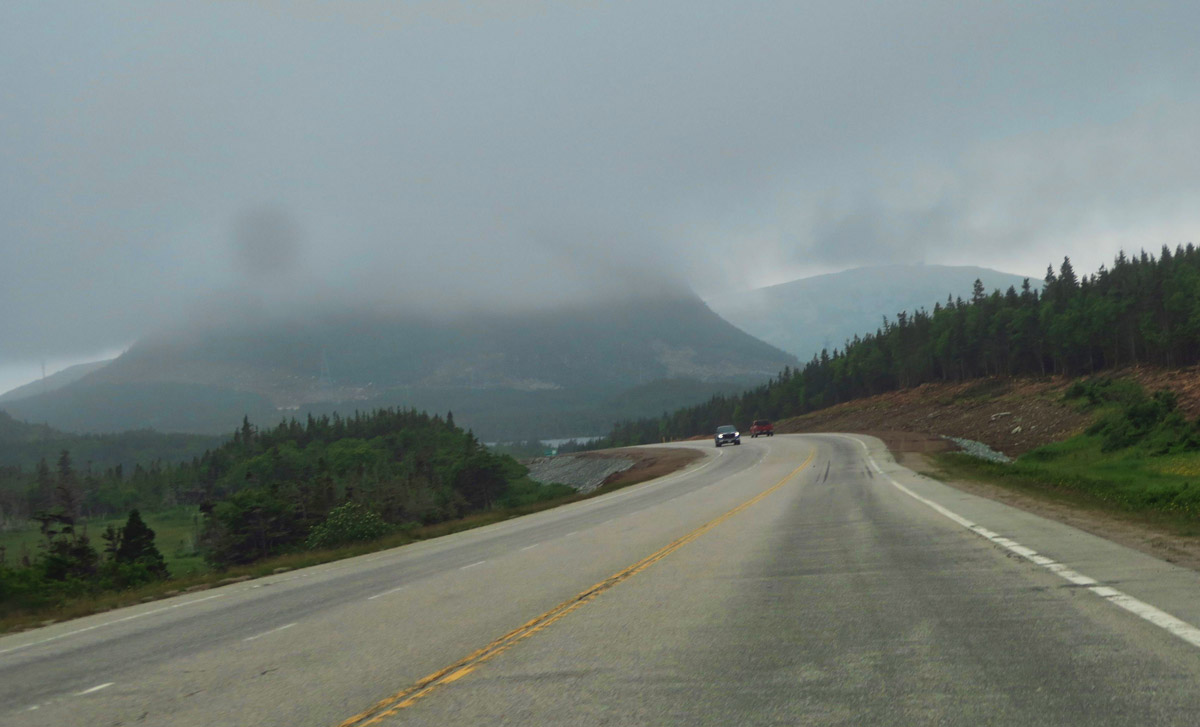 Leaving the southern coast of Newfoundland, the fog begins to lift… 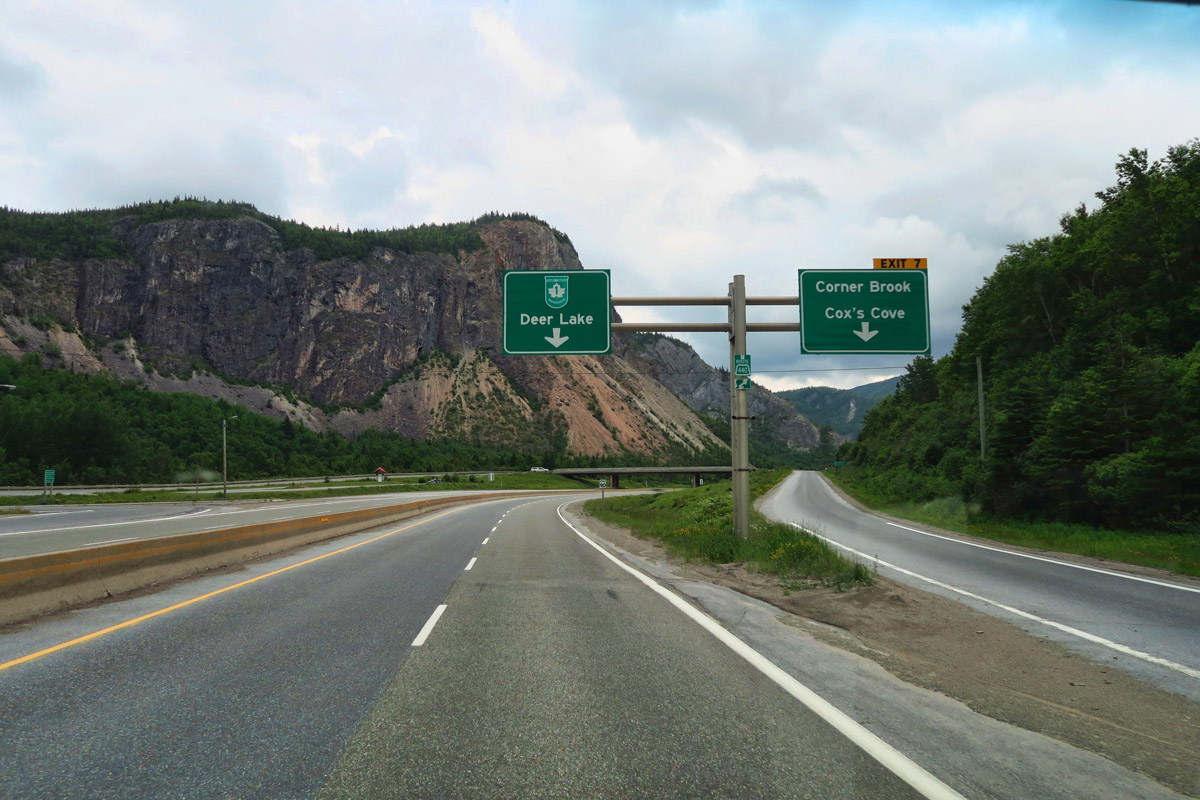 I drive through some beautiful scenery near Deer Lake. 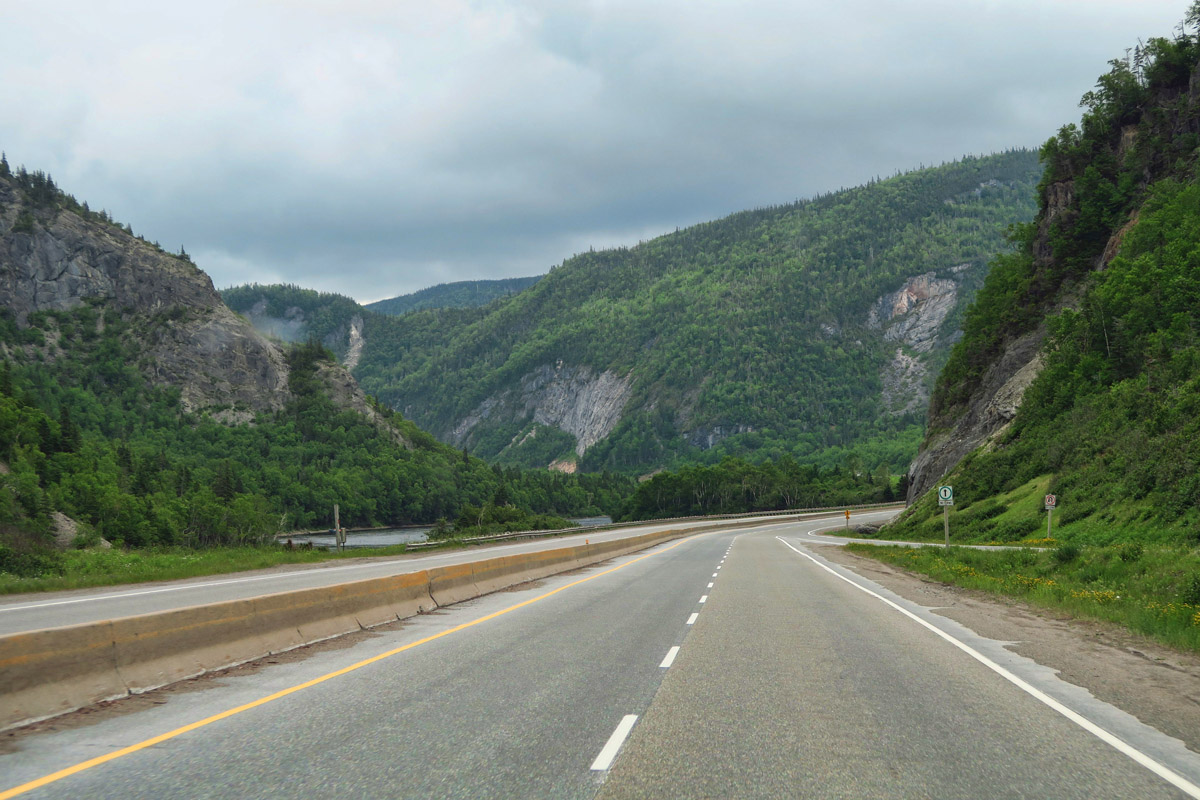 This is near the junction where Trans-Canada Highway (Hwy 1) turns east, while Route 430, the “Viking Trail” continues north.

Gros Morne National Park was awarded UNESCO World Heritage status due to its unique geological formations.  At almost 700 square miles, it’s the second largest national park in Eastern Canada.  I hope to return here to do some hiking on my way back down from the Northern Peninsula when I am not pressed for time to the sound of ice melting.  But on my way up, I decide to check for a window of opportunity to do the Western Brook Pond tour in case weather is less favorable when I return this way. 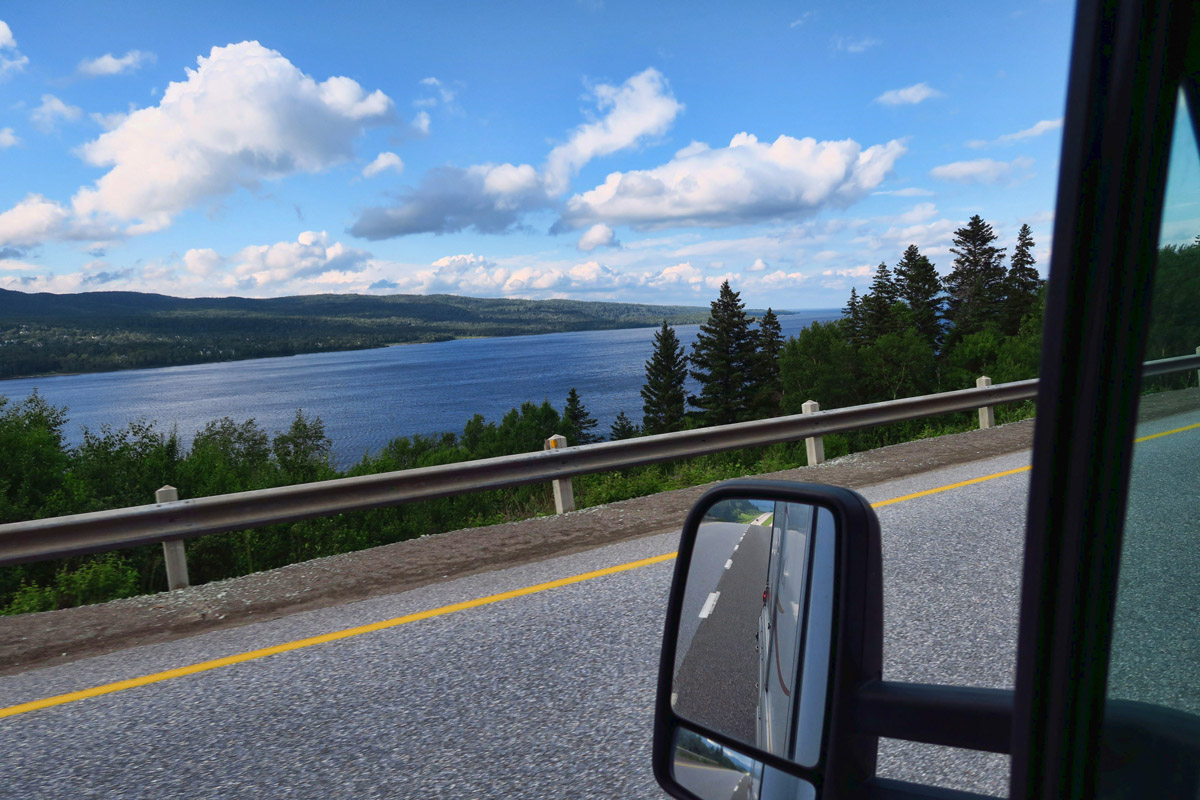 As I approach Gros Morne National Park, the scenery is beautiful. 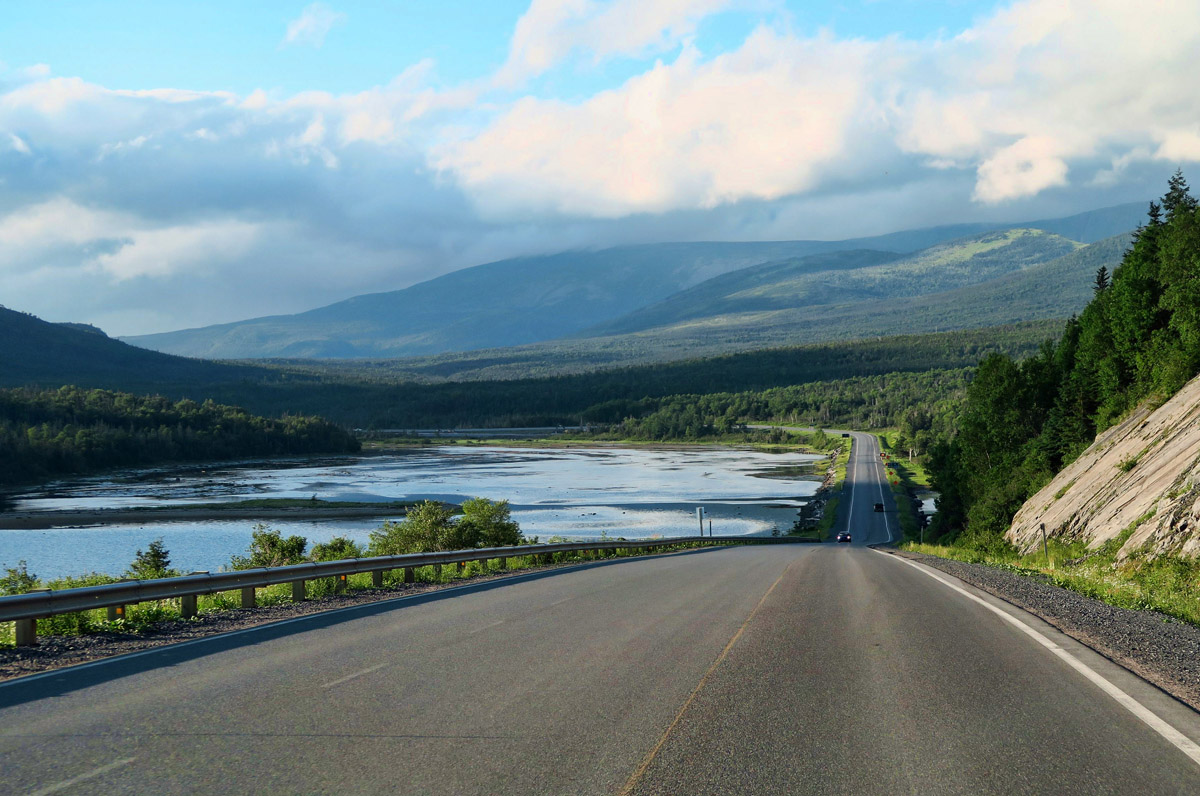 My friends Ed and Marti have told me this boat tour will require some timing.  First, the tour has to be reserved in advance, as this is the most popular attraction in Gros Morne National Park.  But more importantly, it must be timed due to weather.  They had made one attempt, but the boat was turned around when pea soup fog poured in, reducing all visibility.  So their advice is to allow a window of time, as tours are “weather permitting.” 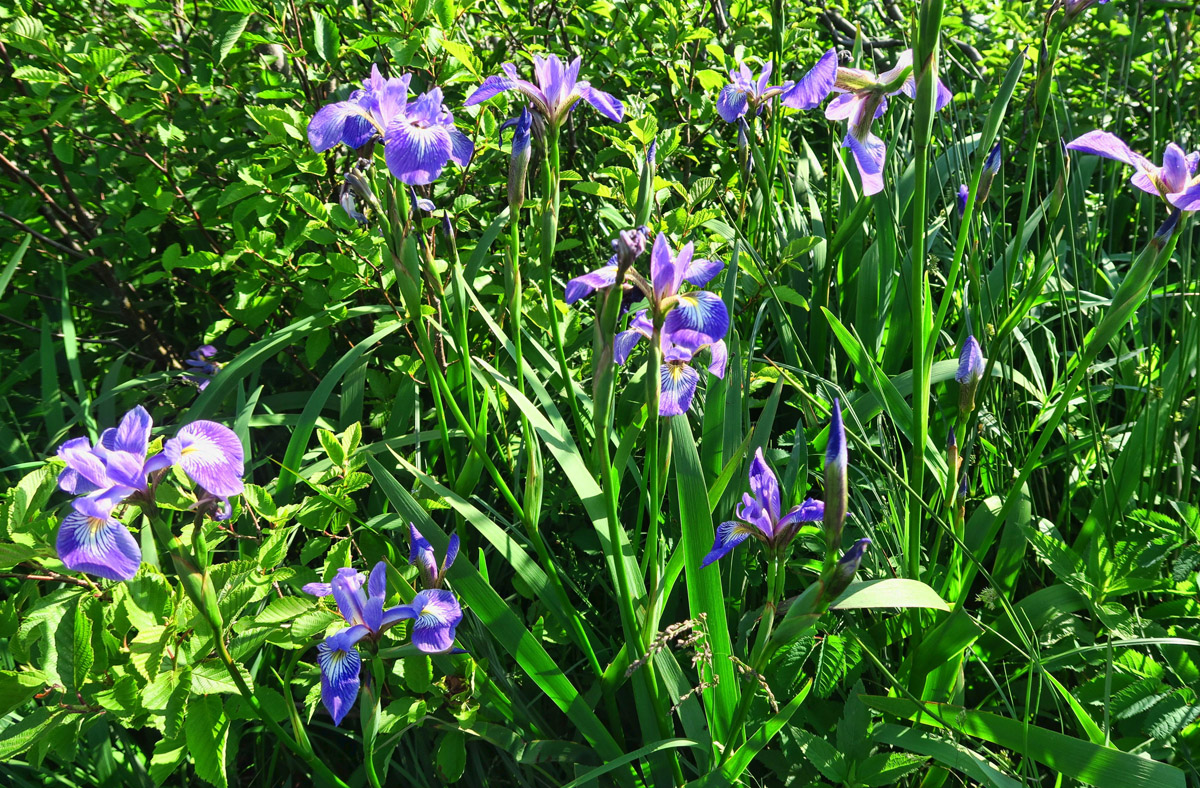 These beautiful wild irises are very prolific in Newfoundland. 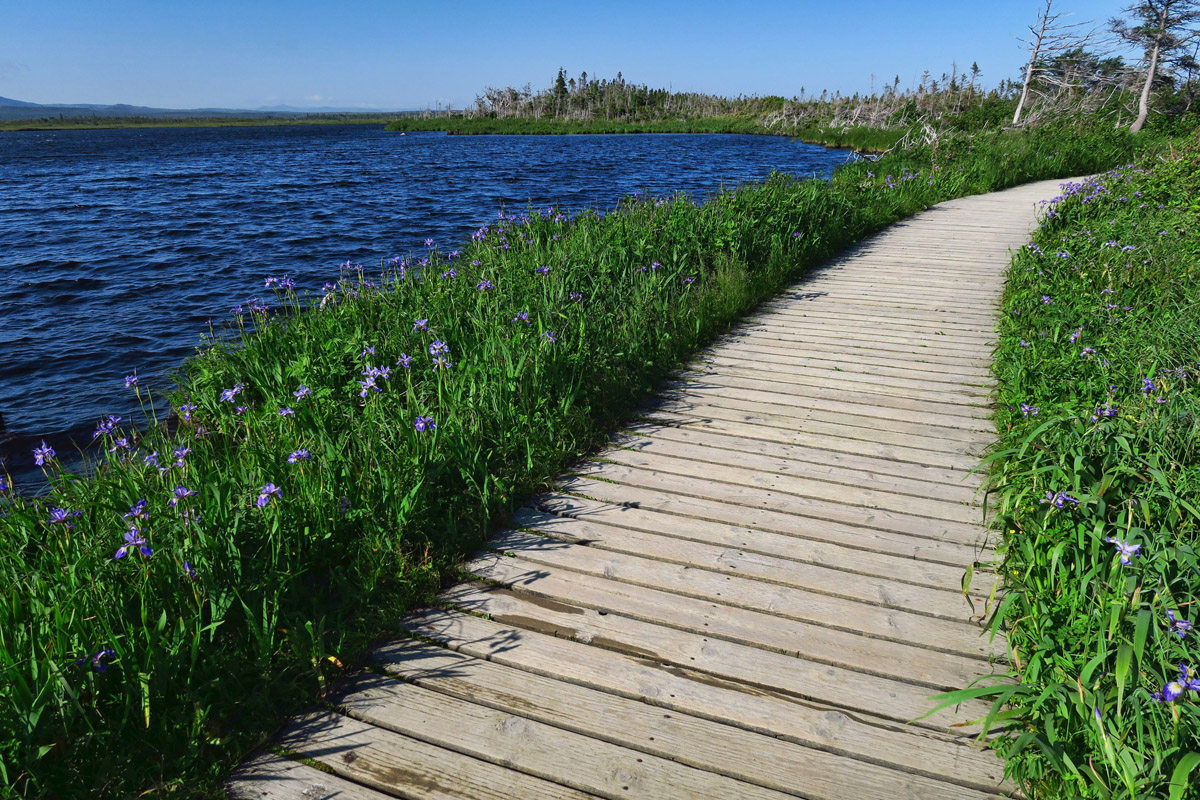 If you look closely, you can see irises all along the boardwalk.

I check the forecast for the day I will be passing through Gros Morne.  It’s the first sunny day in the forecast since I crossed the ferry.  Oh, wait. That was just yesterday.  LOL!    The concentration of scenic beauty here makes time seem more concentrated as well.    I call to make reservations, and book for the first tour out, hoping weather conditions will be best in the morning. 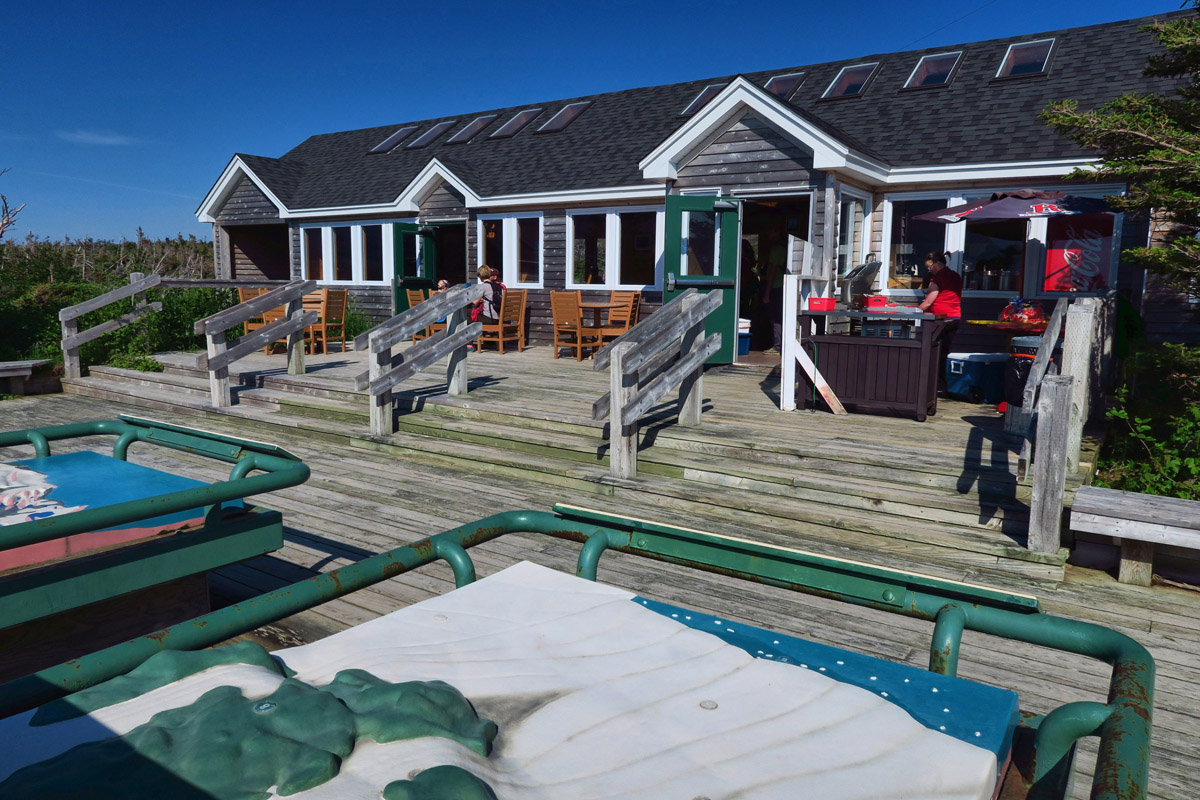 At the end of the 2 mile hike, there is a nice snack bar and gift shop. The display boards in the lower left of the photo demonstrate glacial formation of the lake. 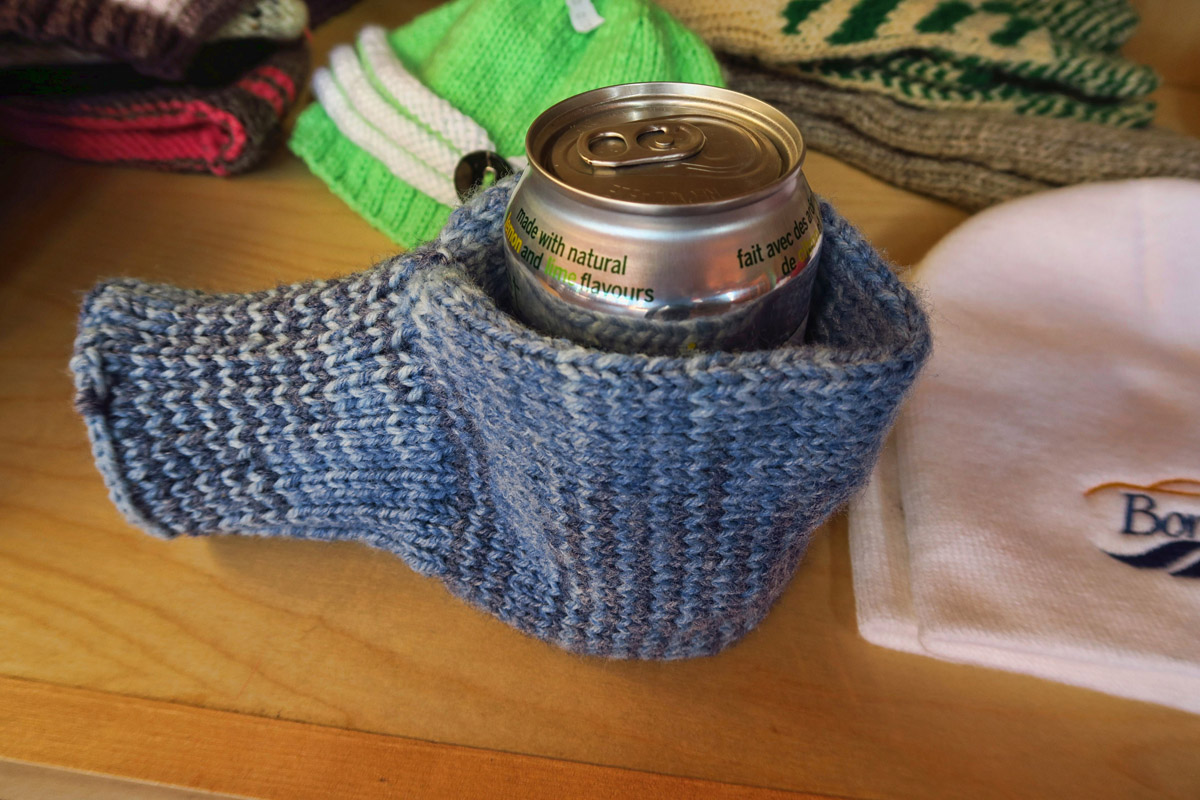 Is this hand-knitted combo mitten/beer coosie for sale in the dock house not the greatest invention? LOL! 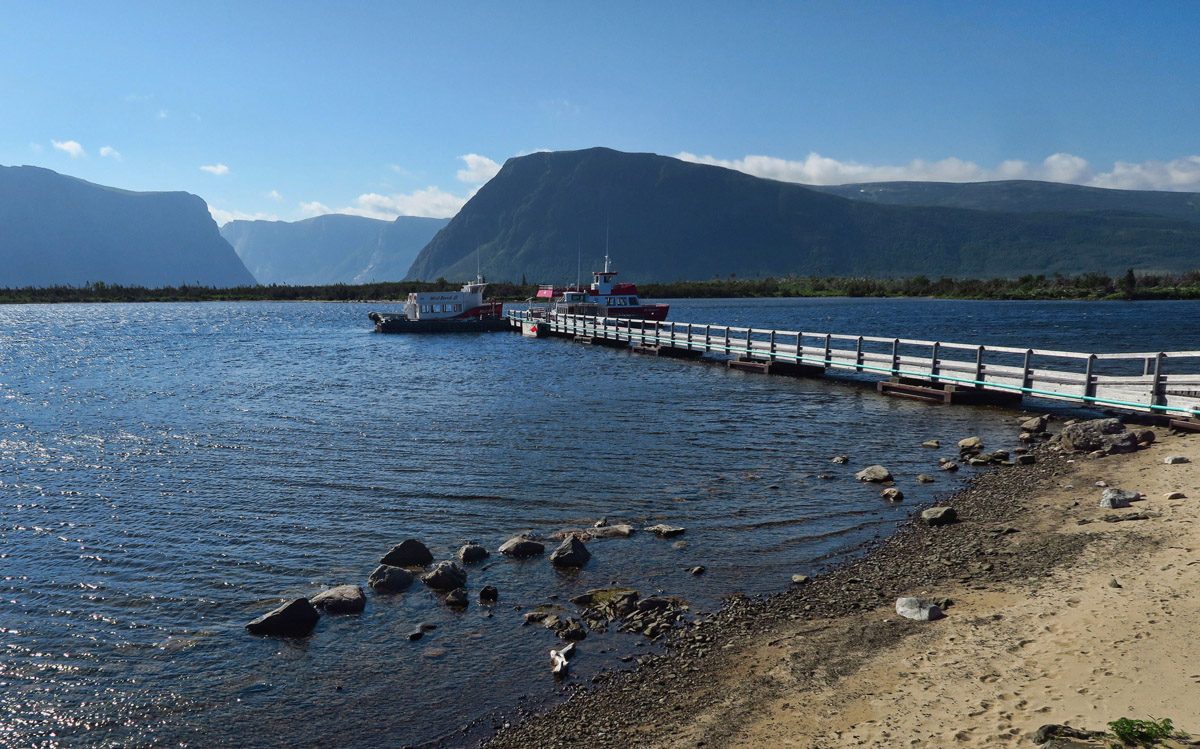 The concessionaire, BonTours will be running both boats up the pond today.

There’s lots of construction going on in Gros Morne National Park, with roads closed down to one lane.  This was also the case in Cape Breton Highlands National Park.  One might ask why they would choose the height of tourist season to close the only road through the park down to one lane.  But after the heavy snow cover and long winters, I can only assume it’s a short construction season. 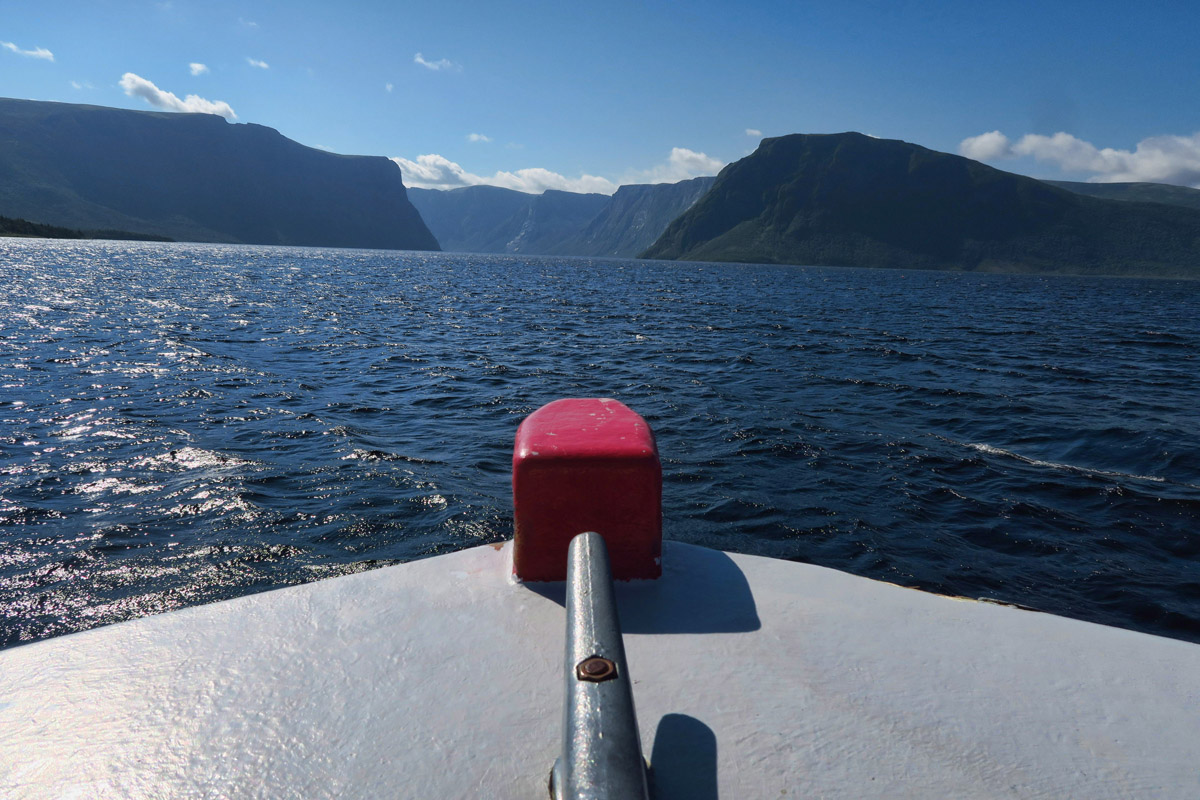 We are headed toward that opening. It’s a bit windy on the pond, but it will calm down once we are buffeted by the 2,000 ft high cliffs. 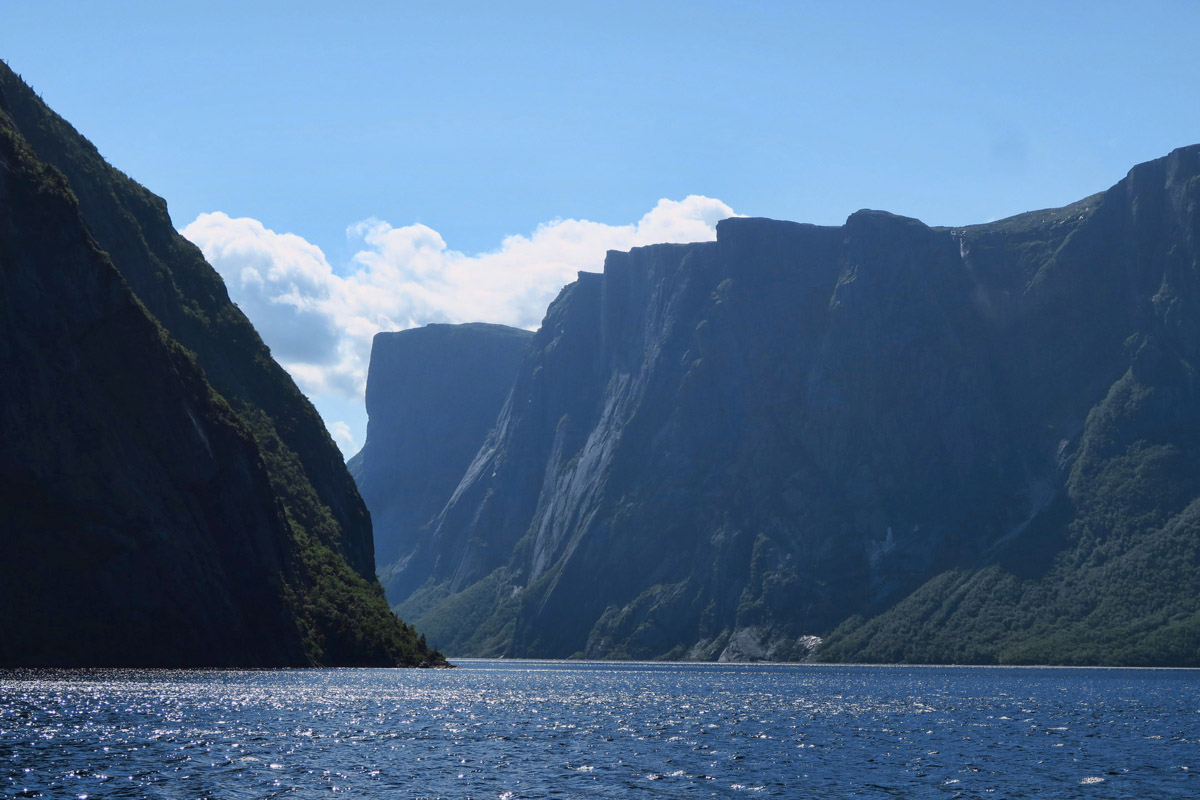 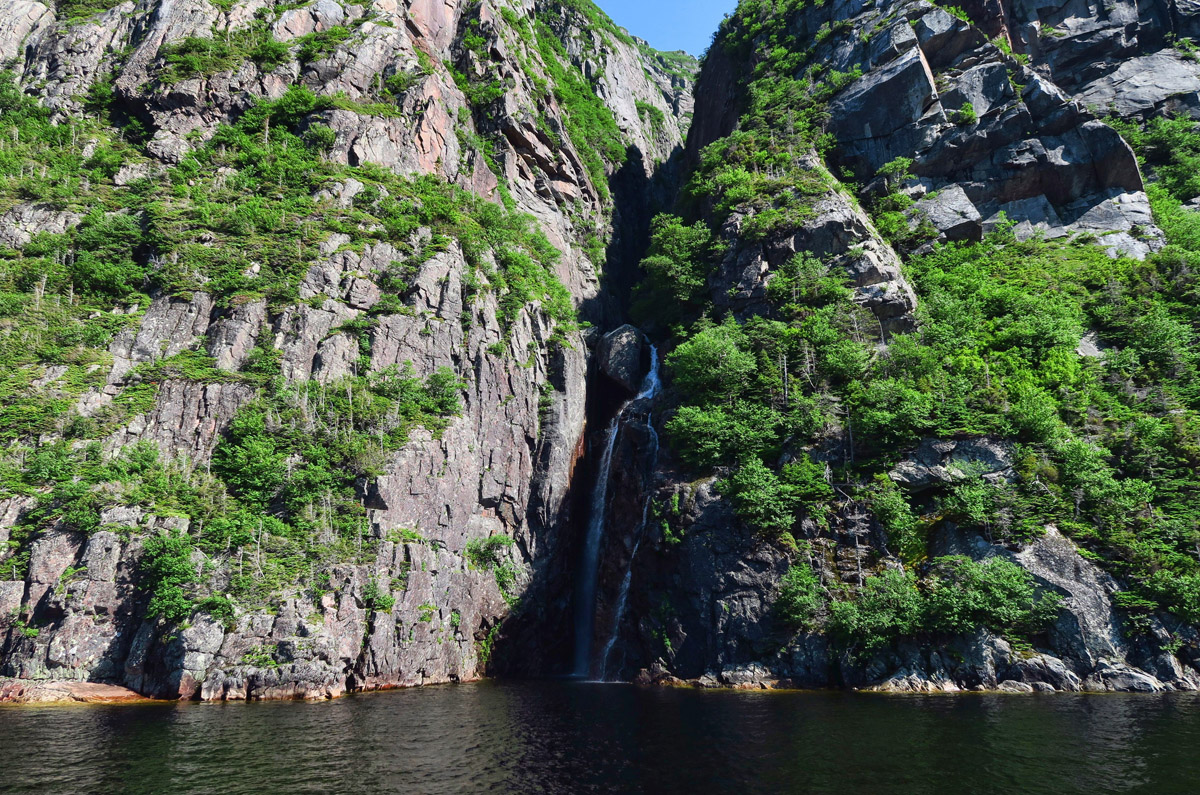 One of the many waterfalls that surround the pond.

Western Brook Pond is on the far side of the park, so by the time I make it through all the single lane construction, it’s an hour from sunset.  I decide this is as good a time as any to test what another View friend Jack Rigby has told me, “Once you get to Newfoundland, you can park anywhere.”  Jack and wife Chris spent two hours with me at the recent DelMarVa Rally going over maps, books, and their trip journal spread out on the picnic table.   Their love for Newfoundland was infectious, and heightened my desire to visit the Maritime Provinces.   I asked Jack “What do you mean, you can park ‘anywhere?”  He gets this dreamy look in his eye and a large grin as he spreads his arms out, palms up, and says  “Anywhere.”

So I figure I’ll try my luck at the Western Brook Pond trail head parking lot.  I circle the lot looking for “No Overnight Parking” signs, but this is also a back country trail head, so people leave their cars here for the 5 day “Long Mountain Traverse” hike.  It’s getting foggier by the minute, and I am eager to stop before the moose are on the move.  Surely no park security would send me out on a night like this. 😉   I am relieved to see one other rig in the parking lot.  There’s safety in numbers!  Turns out, it’s a restful night at the trail head, which allows me a little more sleep before I have to begin the hike to the dock at 8:30am. 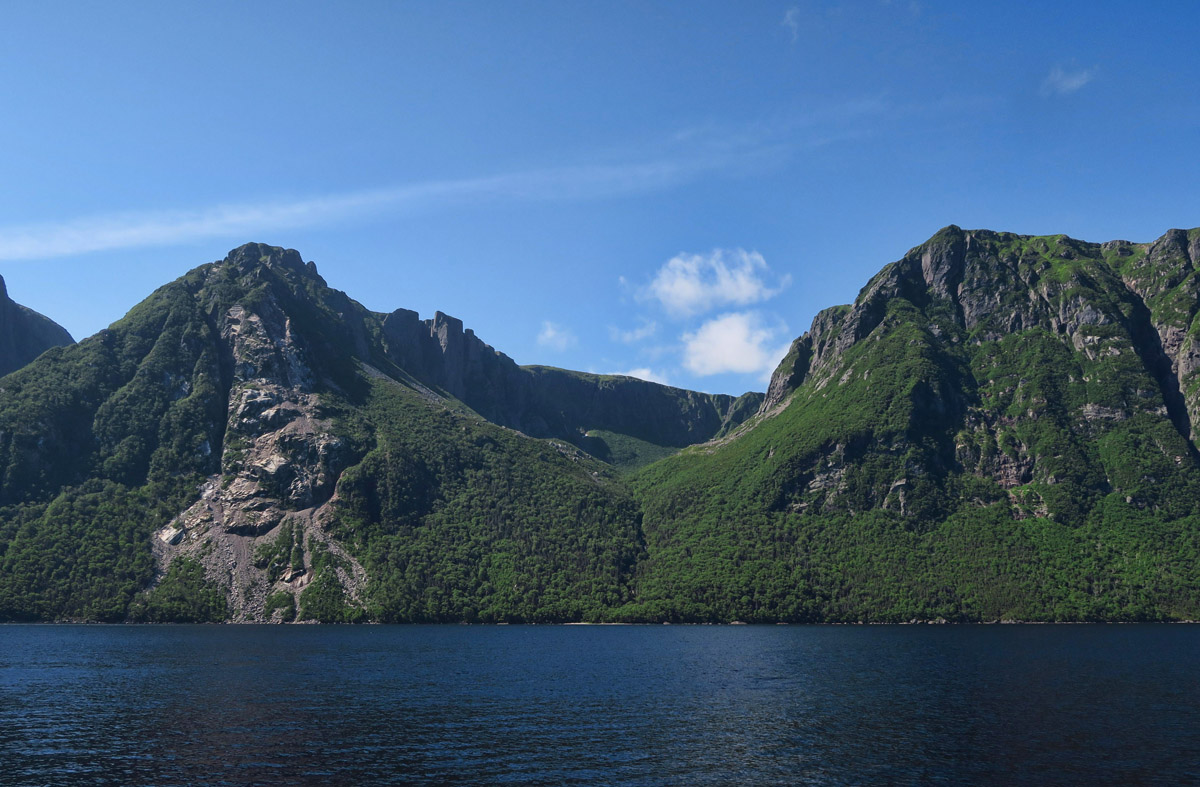 This upper area is known as a “hanging valley.” It bottoms out above the cliff base. 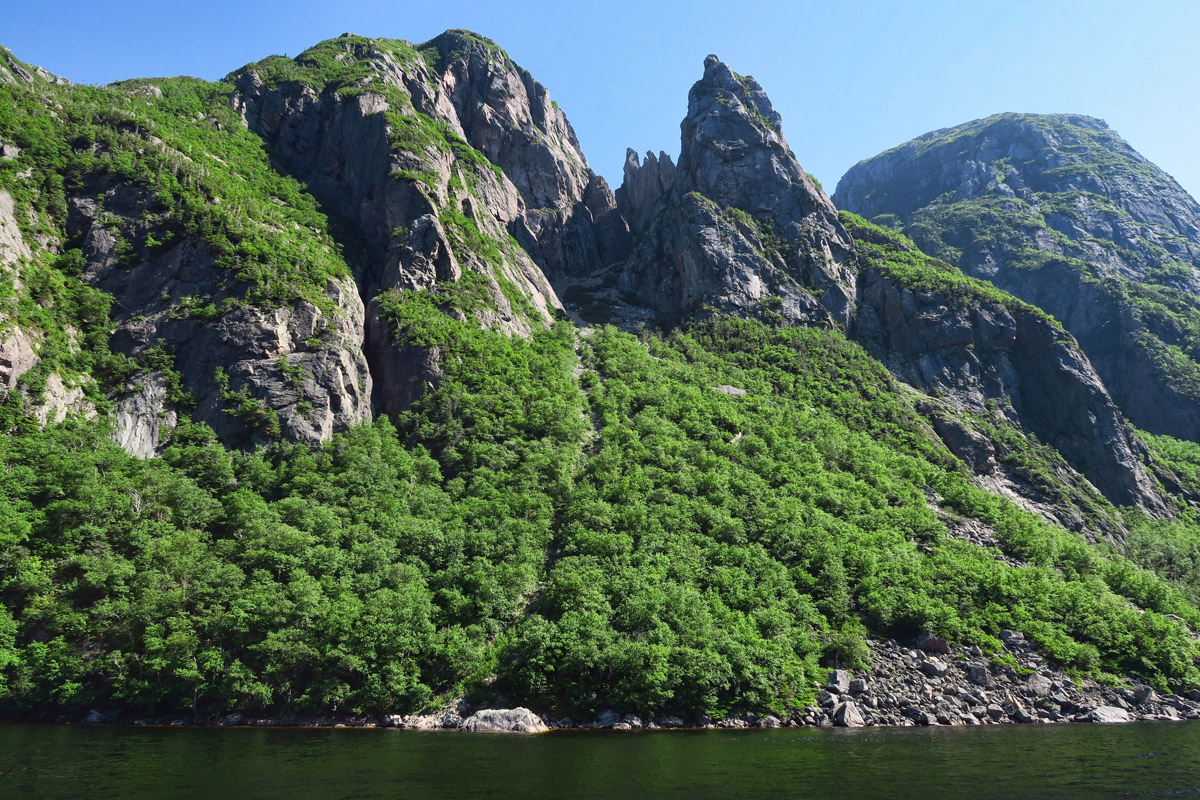 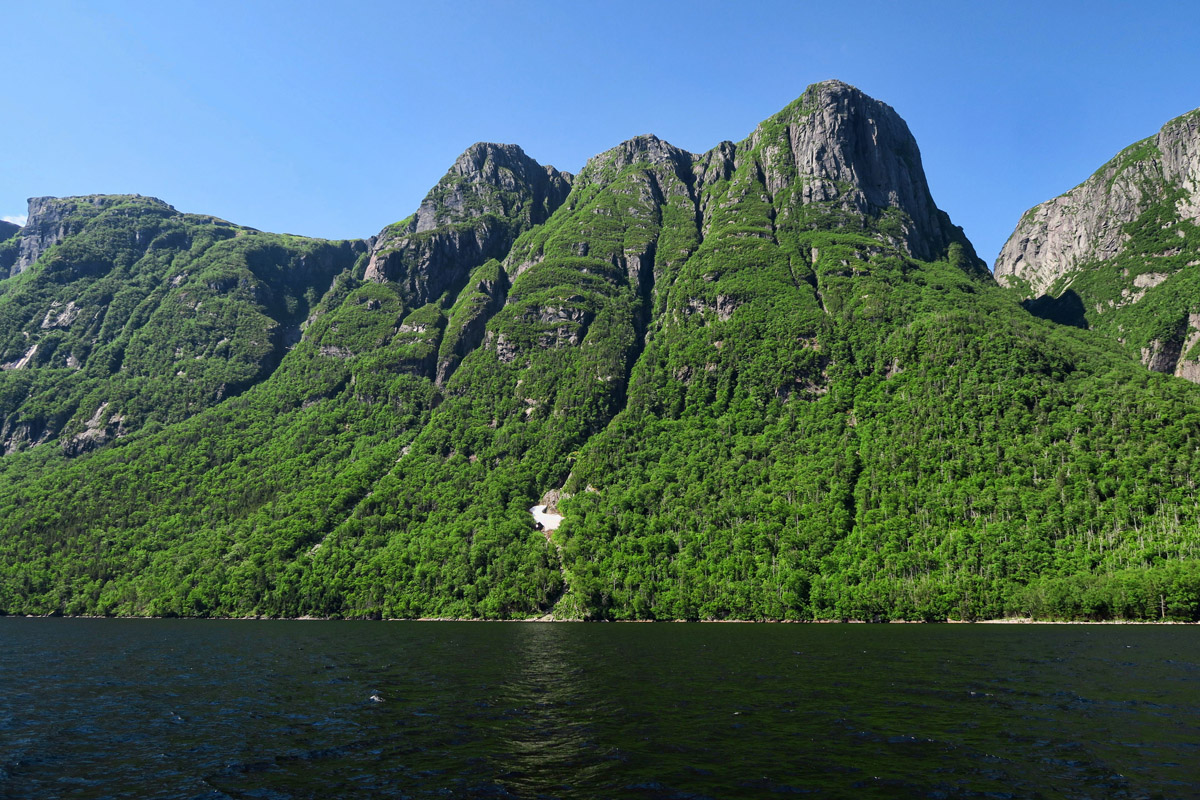 There are a few tiny patches of snow left, but not many…

Although Western Brook Pond is still called a “fjord,” it technically lost this status when the lake was cut off from the ocean. Part of the Long Range Mountains, the northernmost extent of the Appalachians, these 2,000 ft foot cliffs enclose the land-locked lake.

The two mile hike to the pond is an easy walk through marsh along the boardwalk.  It’s a serene, peaceful walk accompanied by birdsong, with beautiful wild irises, yellow flowers (don’t know the name) and a few pitcher plants lining the trail. Another reason to book the first boat out in the morning is that there are no crowds coming at you from the opposite direction, having just finished the tour.  Going to the boat at 9:00am is a completely different experience than returning at 11:00am, meeting people rushing to catch the 12:30pm boat. 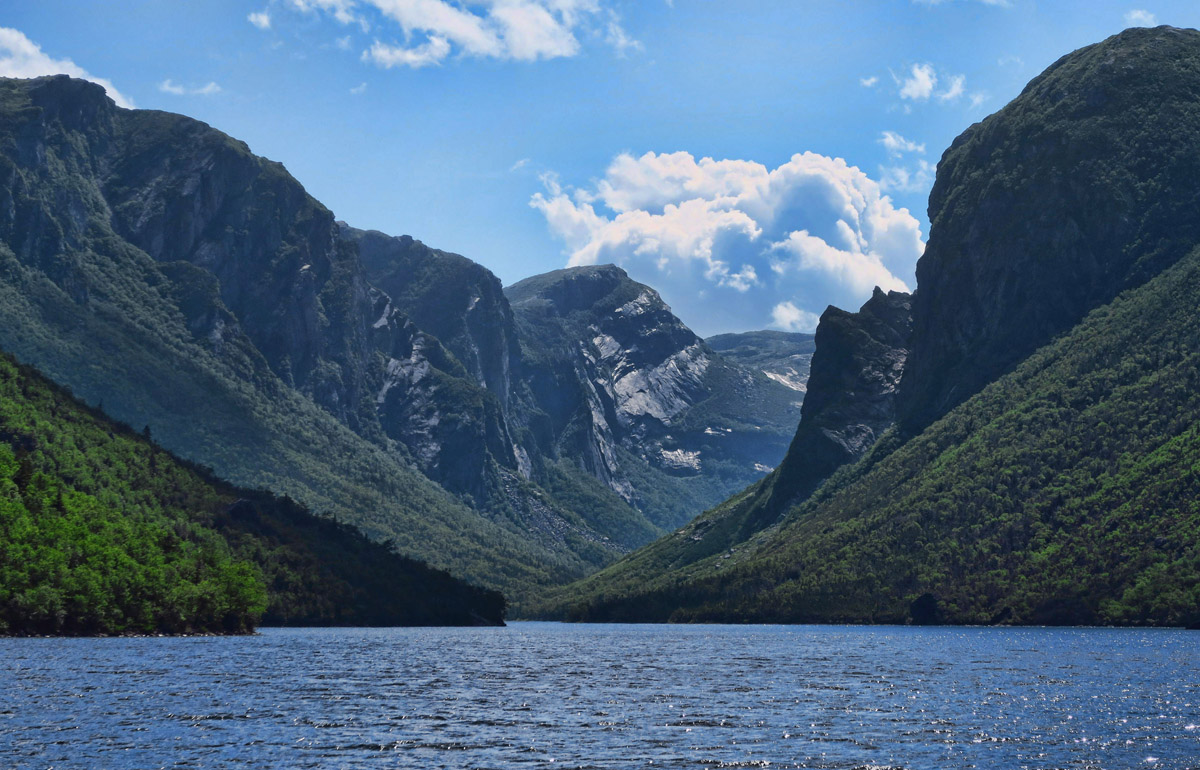 The U-shape curve of the cliffs demonstrates glacial formation of the gorge. 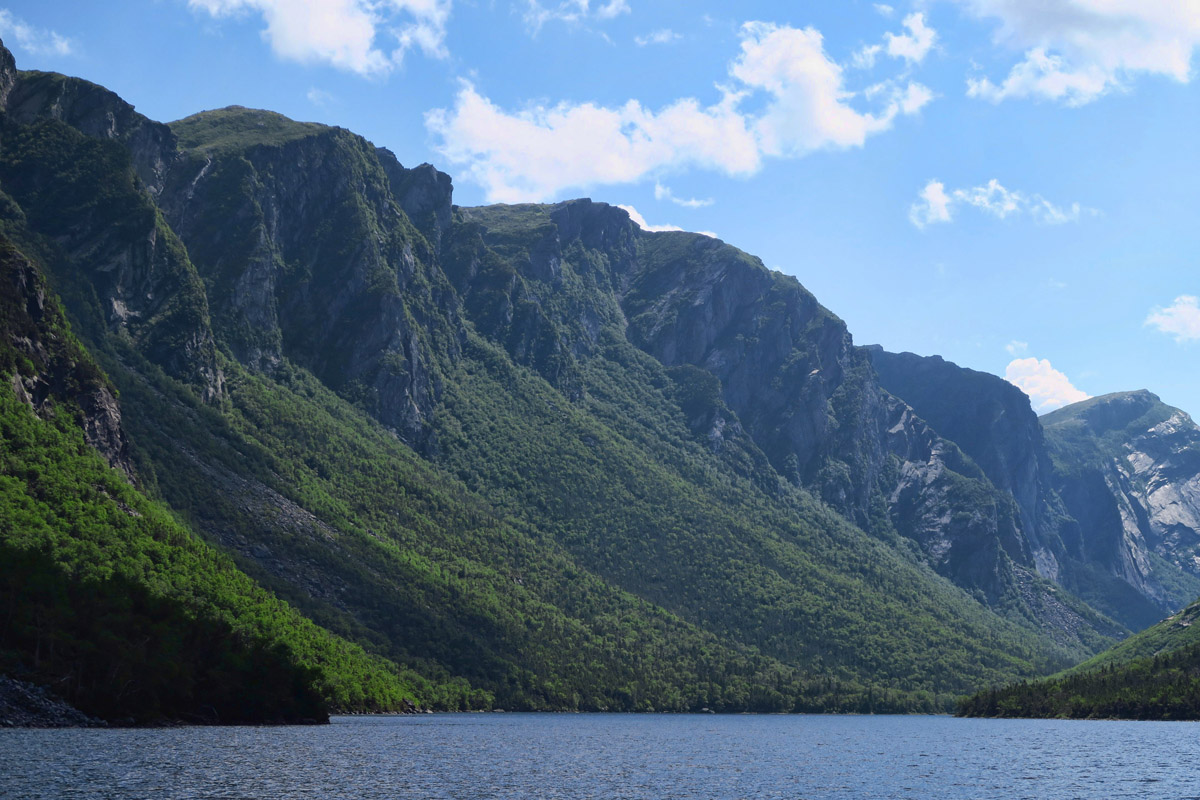 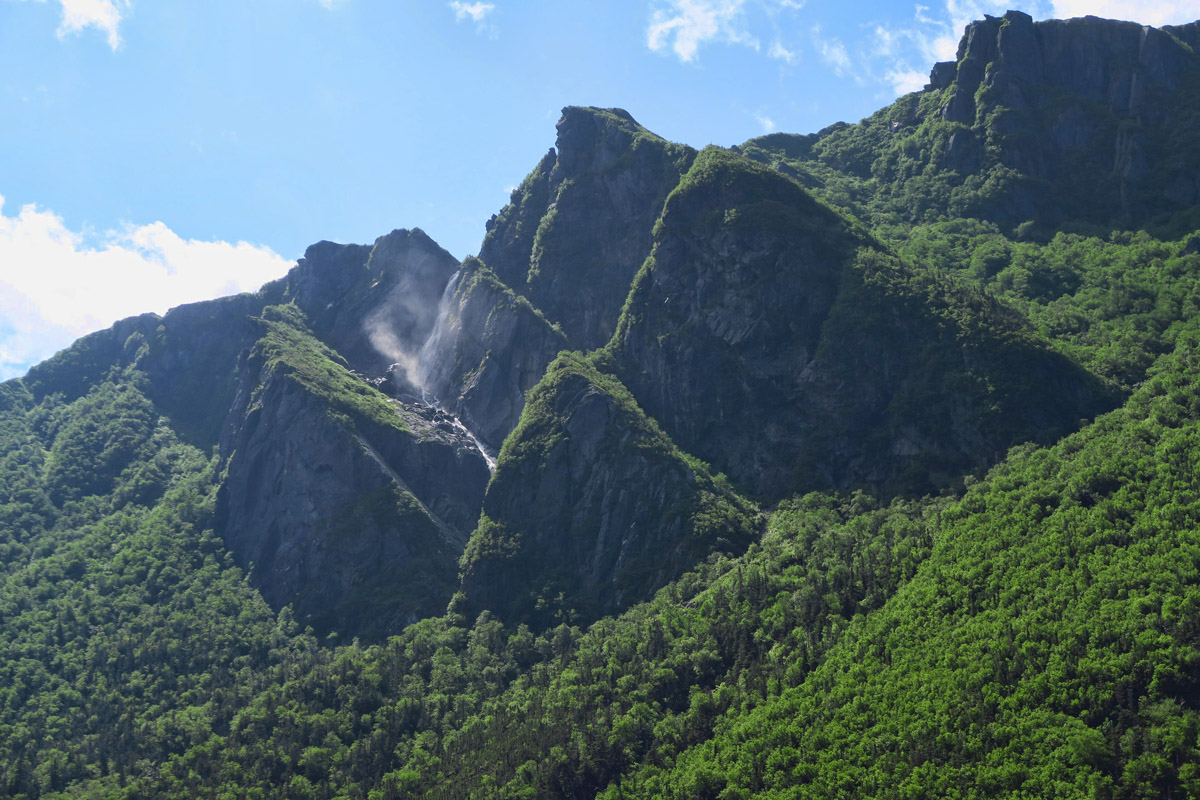 The mist you see between the rocks in the upper left is from one of the higher falls, the largest of which is named “Pissing Mare Falls.” 😉 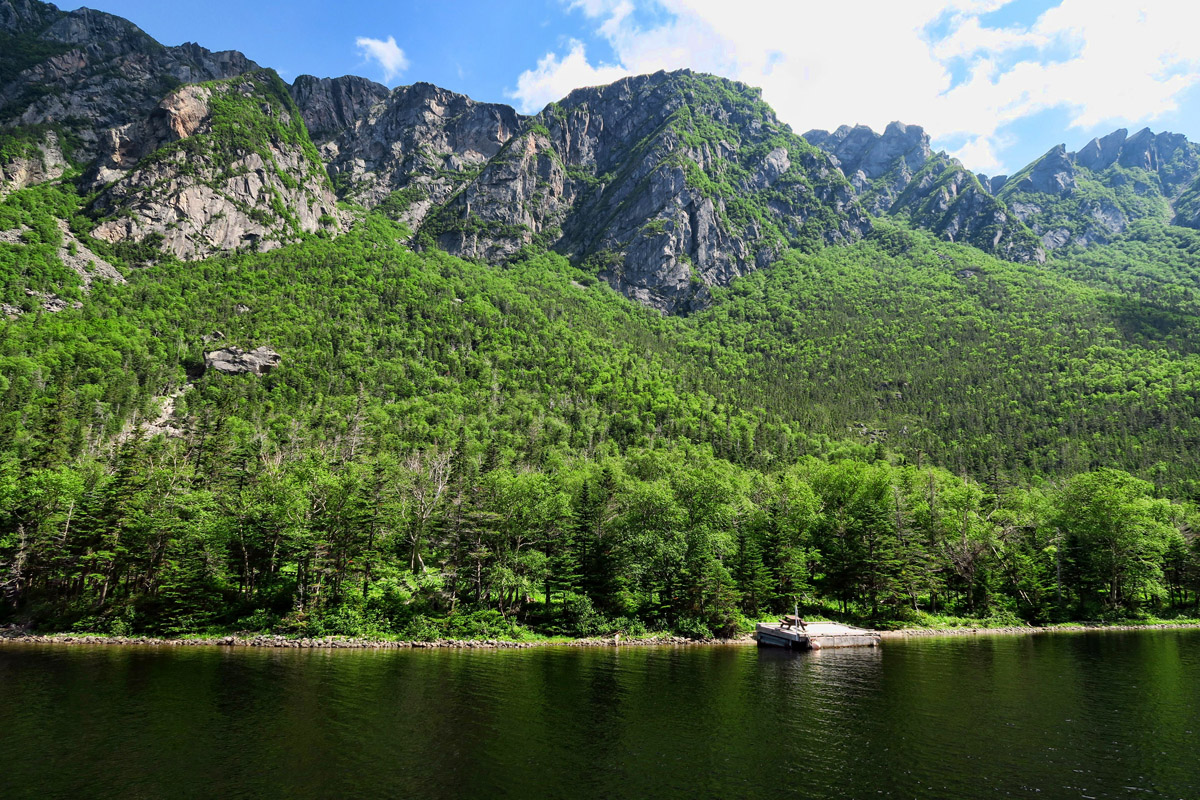 This platform is where they drop off and pick up back country hikers who have done “The Long Traverse,” eastern Canada’s premier backpacking trail.

The tour along the lake takes two hours, with guided narration that tells about the glacial formation of the lake. Although once filled with salt water, the lake is now completely fresh, it’s only water source the many waterfalls along the sides of the gorge. Many factors contribute to the lake being one of the purest sources of water, including “small drainage basin, sparse plant cover, and limited human influence.” Since the only course in and out of the pond is via small streams, it takes 15 years for the 250 ft deep lake to completely refresh.

BonTours has three boats on the lake.  Two larger tour boats, and one smaller, faster boat used for hiker shuttles.  Since there are no roads reaching the lake, it is explained that the smaller of the two tour boats was brought in by helicopter in two pieces, and assembled at the dock.  But the other two were brought in across the snow and ice during winter, when the lake was frozen. 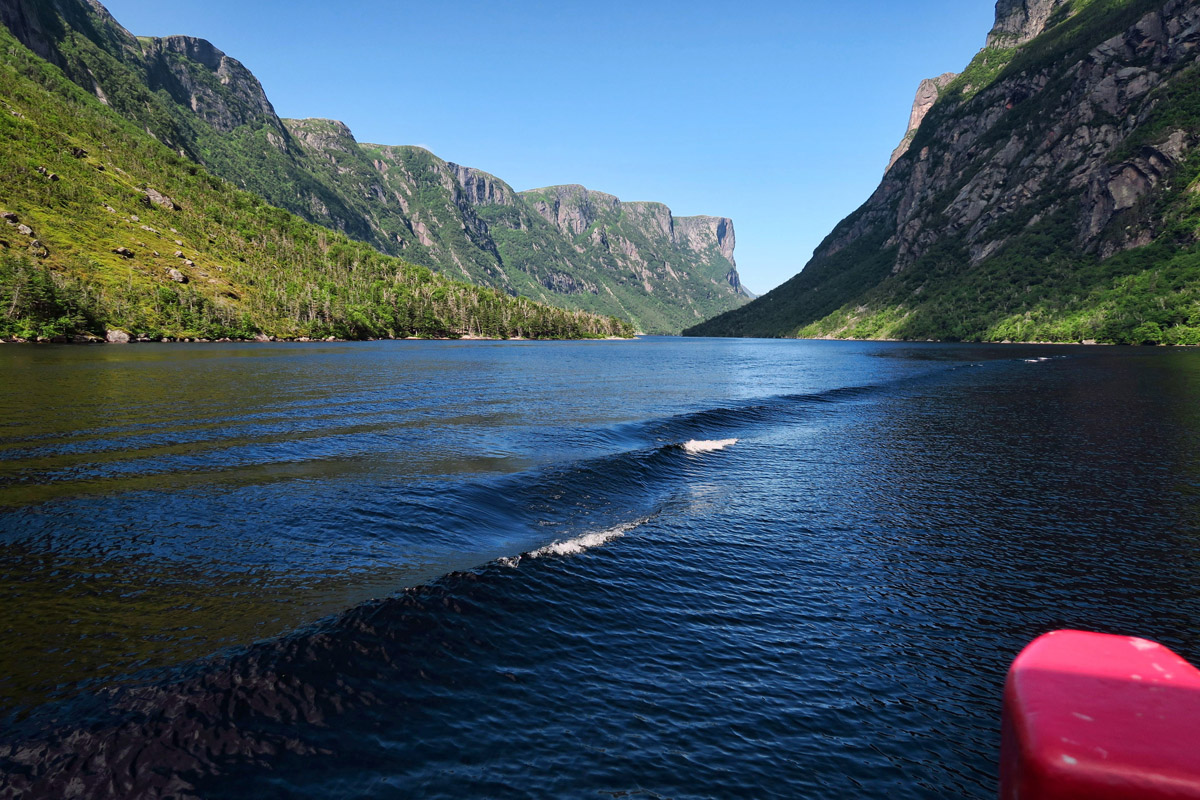 The pond narrows down to a point, where we U-turn it and head back. 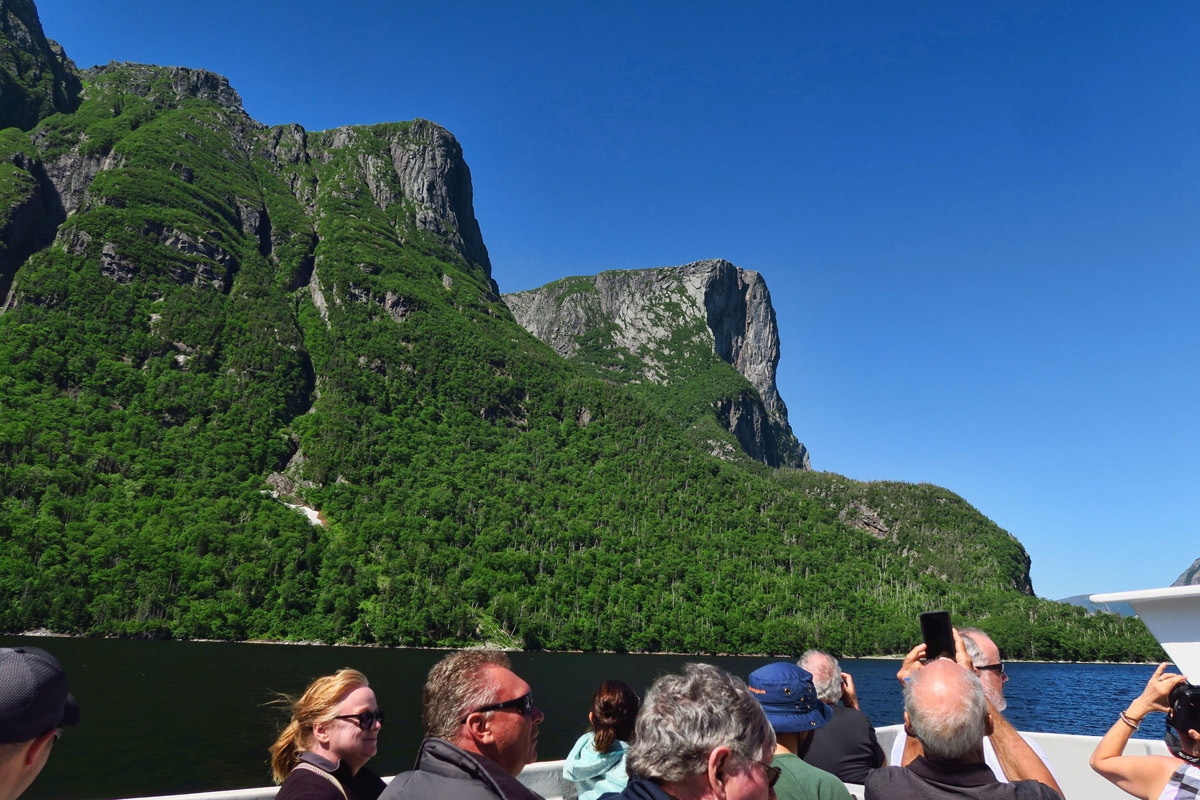 I spent most of the tour up on the bow, but I come up to the top deck to check out this view. Too many heads. 😉 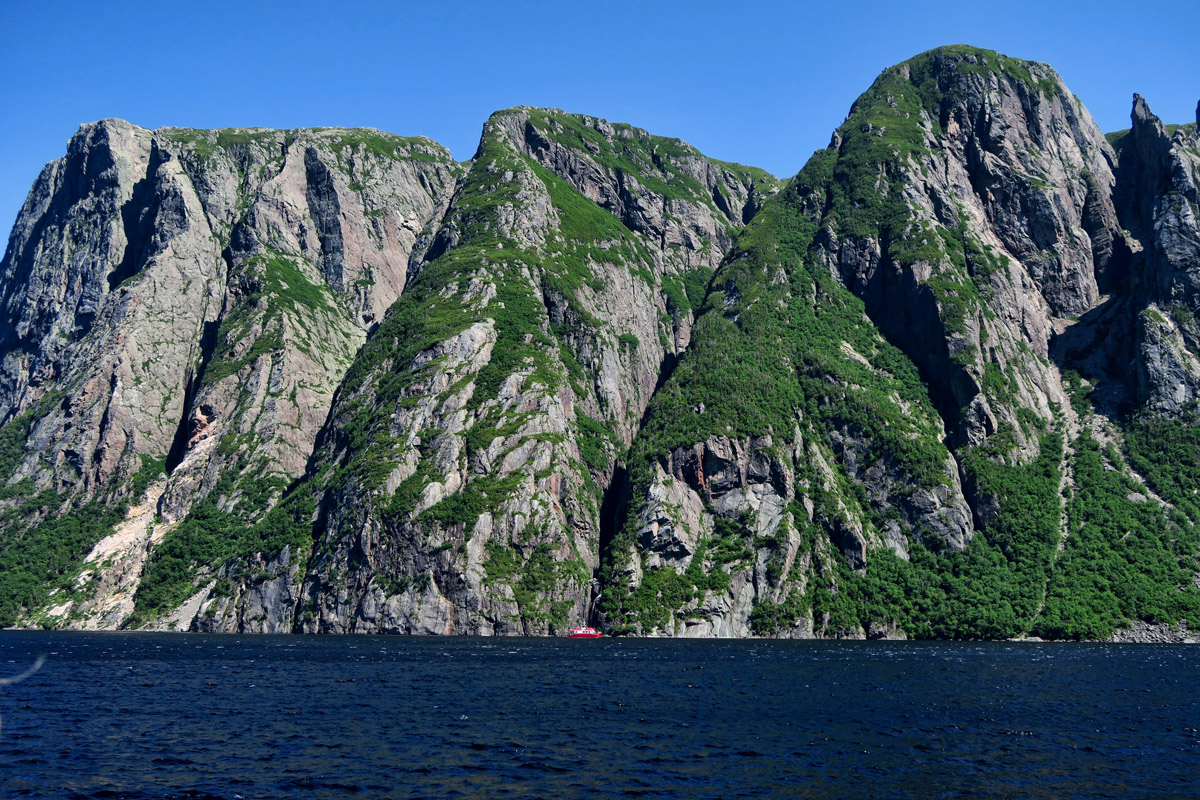 For scale, note the tiny red dot, which is the larger of the two tour boats at the base of the falls in the dark crack… 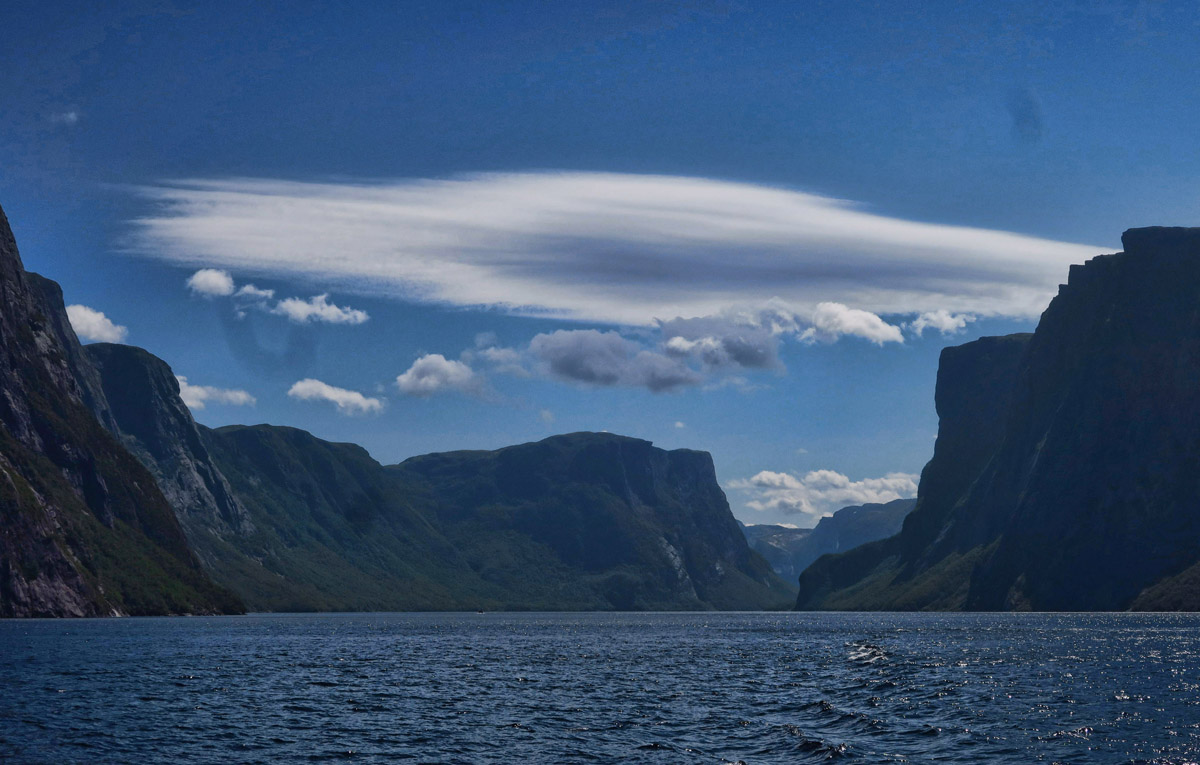 It is possible to hike up to the top of the rim, overlooking the gorge, which takes an estimated 8 hours round trip.  But the National Park Service requires a permit to do this, and from what I read, since it’s considered a back country hike with no trail markers, they actually test your compass skills!  Or, you can take a guided day hike……for a mere $250 a person!  (Take heed, Guide Noir!)

I get back to the Winnie by 12:30pm, just in time for a quick tuna sandwich before I continue my drive on up the Northern Peninsula, following the “Viking Trail.”