My northernmost point on the island of Newfoundland is L’Anse aux Meadows, UNESCO World Heritage site at the end of The Viking Trail.

If one is to write an honest blog, it sometimes means confessing to one’s ignorance.  Prior to my visit to L’Anse aux Meadows, my knowledge of Leif Erikson was relegated to high school history class when Leif was used as an example of a “patronym,” the naming convention of a person’s surname being based on the given name of one’s father.  Leif Erikson was “Erik’s son,” son of “Eric the Red,” who was credited with discovering Greenland. 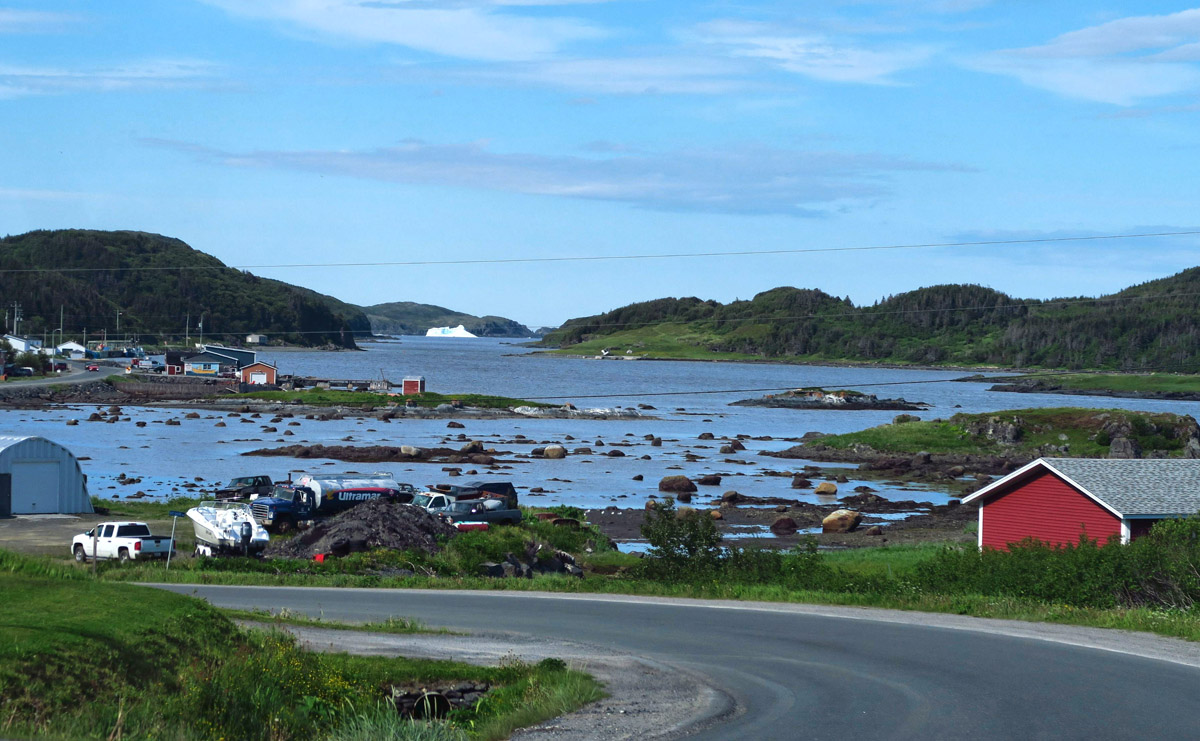 As I travel along the coast, I spot smaller icebergs in coves along the shore. 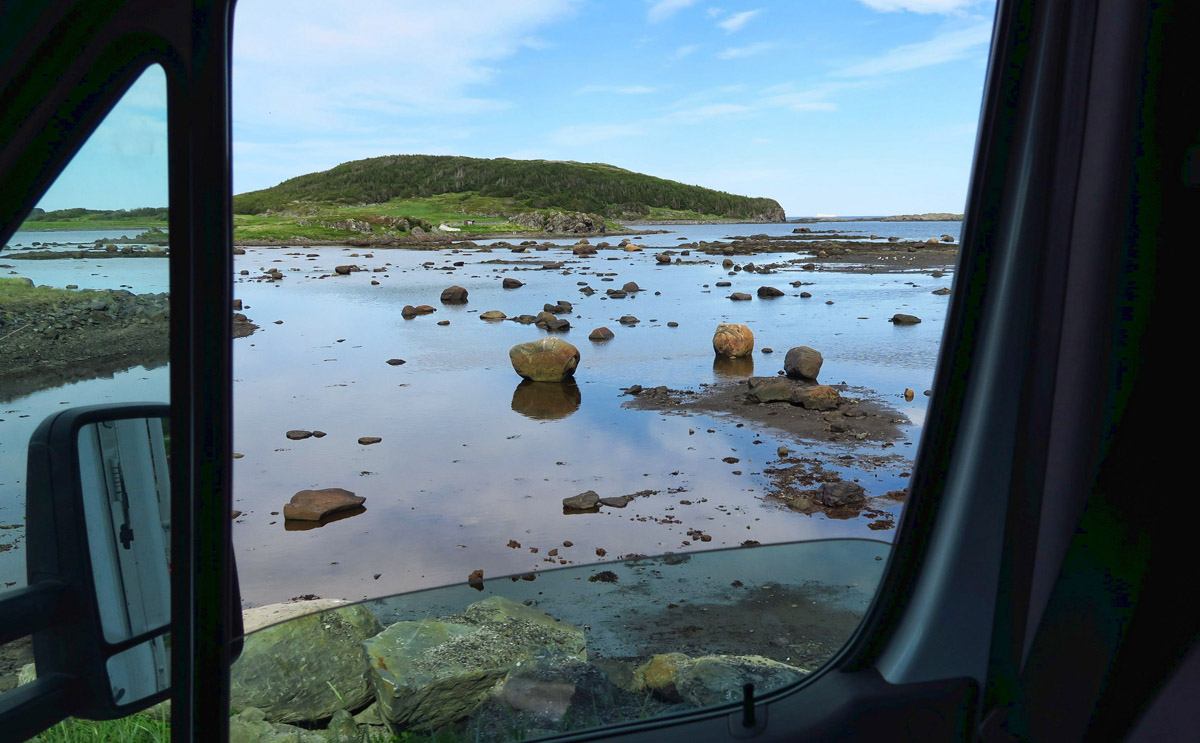 The road on up to L’Anse aux Meadows is very scenic. 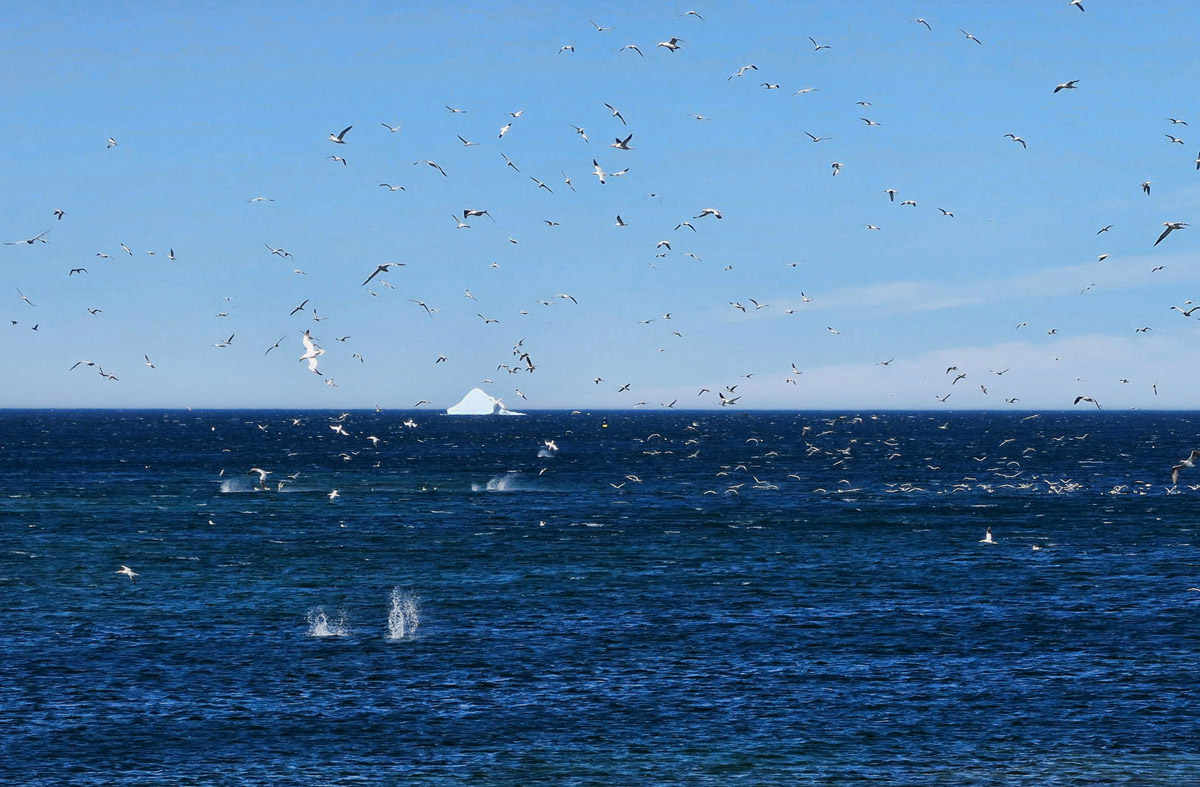 As I am driving along the edge of a cove, I spot this gull frenzy taking place out the window, so I pull over to watch for a while (Note another iceberg in background.) 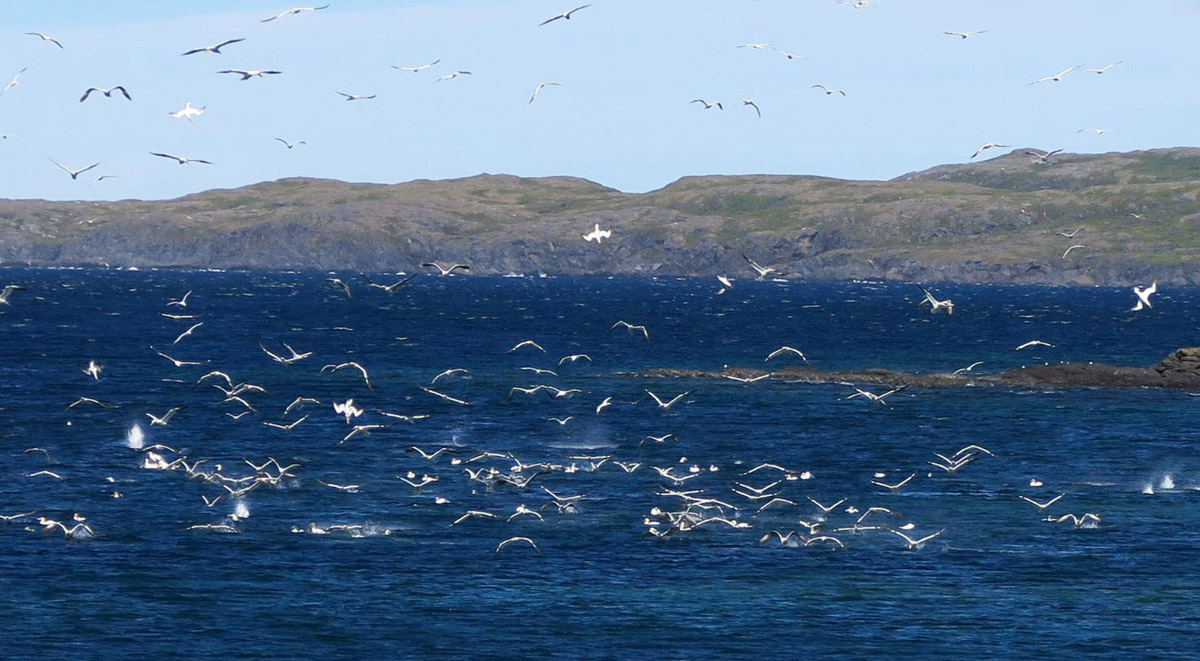 I’ve never seen gulls diving like this before. They fly up in a circle, then dive head first in what looks to be a 20 ft tailspin. I believe they are diving for Caplin.

If I knew before today, I forgot….Leif Erikson actually landed on North American shores 500 years before Christopher Columbus.  Yet somehow, Columbus gets all the credit for “discovering” America, when in fact, neither of them “discovered” it since it was already inhabited by indigenous people.  So I’ll buy that he was the first European to land on North American soil.

Leif Erikson was believed to have landed in three sites in the Maritimes, Baffin Island, Labrador, and the northern tip of Newfoundland.  Excavations have shown signs of boat repair being done in L’Anse aux Meadows based on evidence of bog iron and smelting carried out in the area.   Signs indicate they didn’t stay long, however, as they were believed to meet with hostility from the aboriginals. 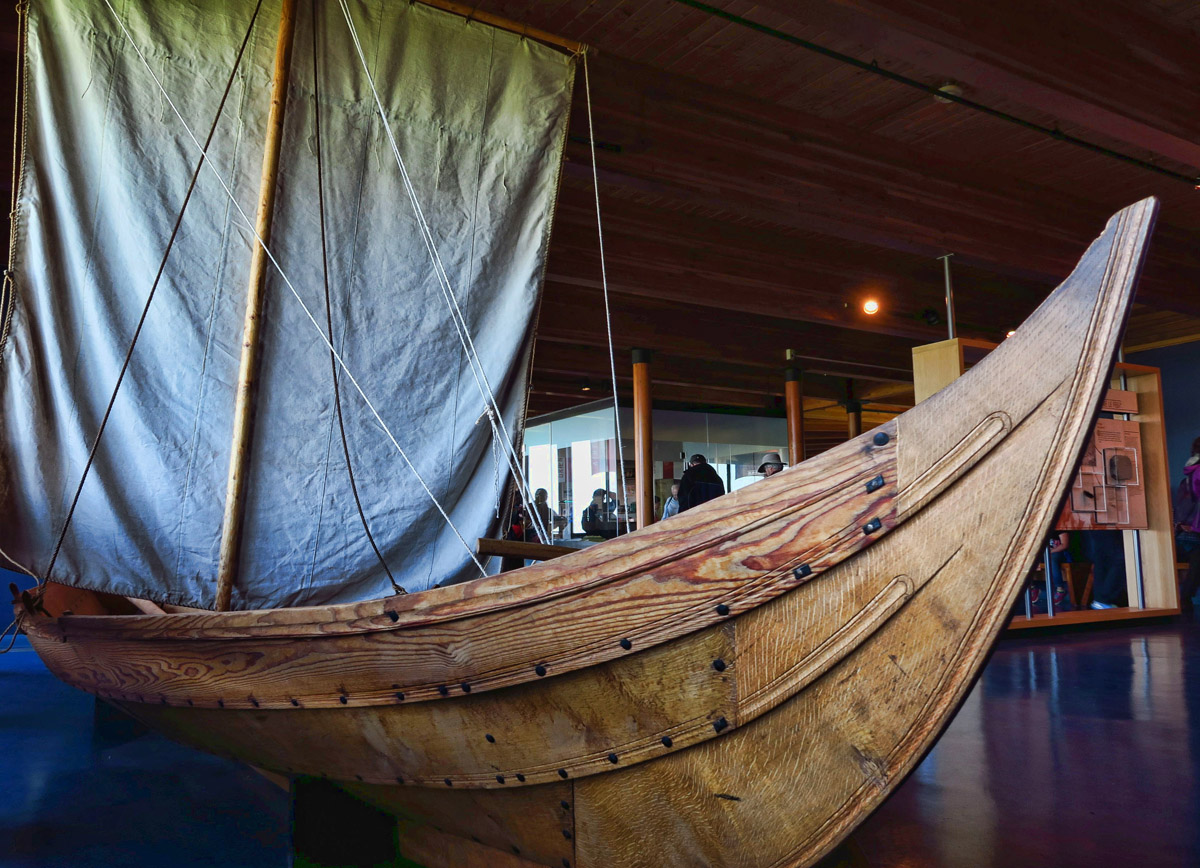 Inside the Visitor Center at the L’Anse aux Meadows site is a replica of a Viking Ship based on drawings in the Norse Sagas. 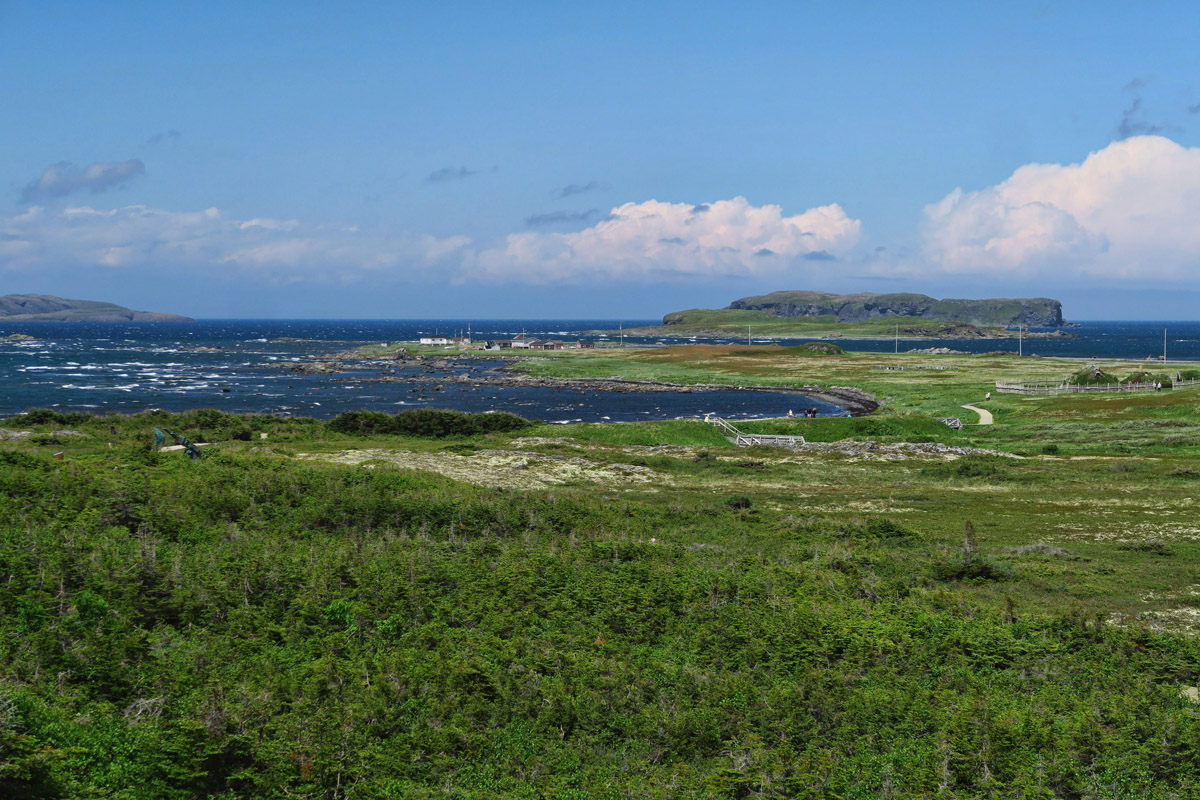 Looking out over the L’Anse Aux Meadows site, the interpretive guide tells us there would have been trees here when the Norse arrived. 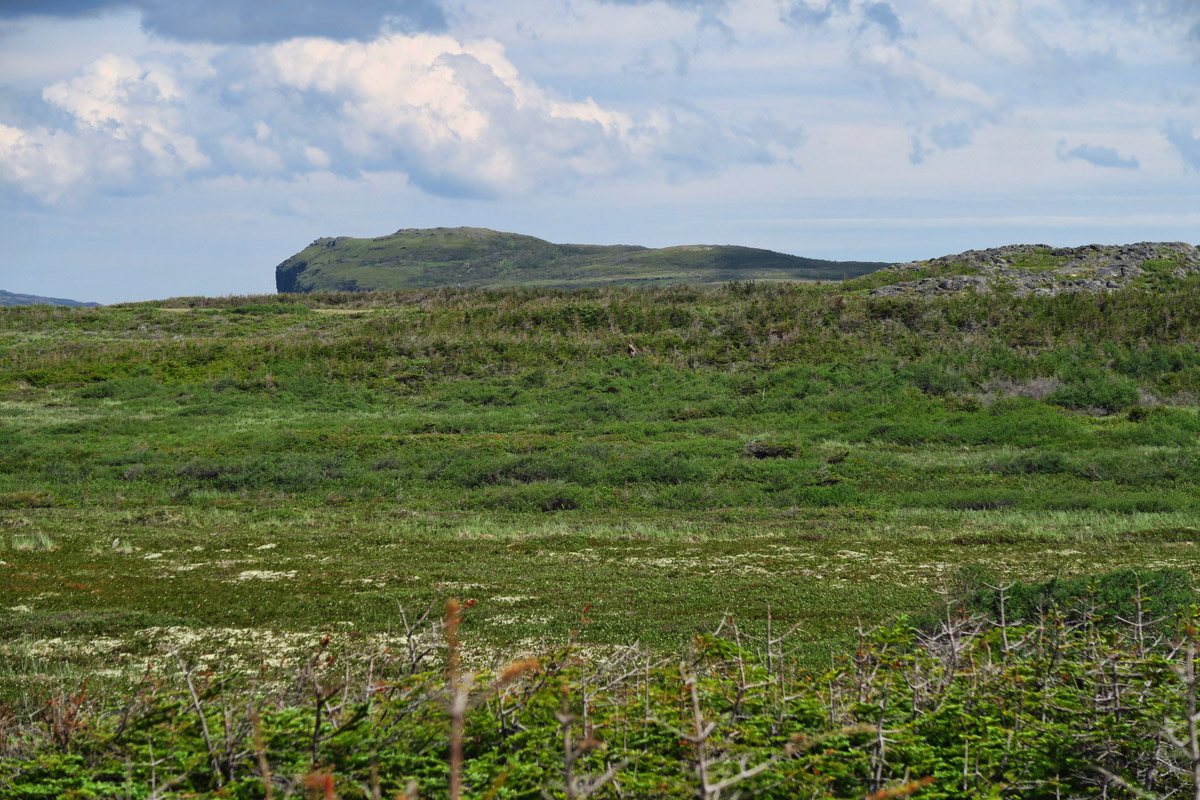 See that tiny brown dot in the middle of the photo? Nah, me neither. That’s my one “moose sighting” so far on the trip.

I’m not much of an ancient history buff, but being so close to L’Anse aux Meadows, I can’t pass up the opportunity to see a UNESCO site.   I probably would have lost interest fast were it not for Clayton, the Park Ranger.   Just like Erik the Red, Clayton was once a redhead, evidenced now only by his eyebrows. He is a “Newfie” through and through, with a heavy brogue that sounds familiar to me, like a cross between Irish and Brooklyn with a southern twang.  Clayton grew up in L’Anse aux Meadows, and tells of his childhood playing on the mounds that were believed to be Indian mounds in what they called, “the old Indian camp.” 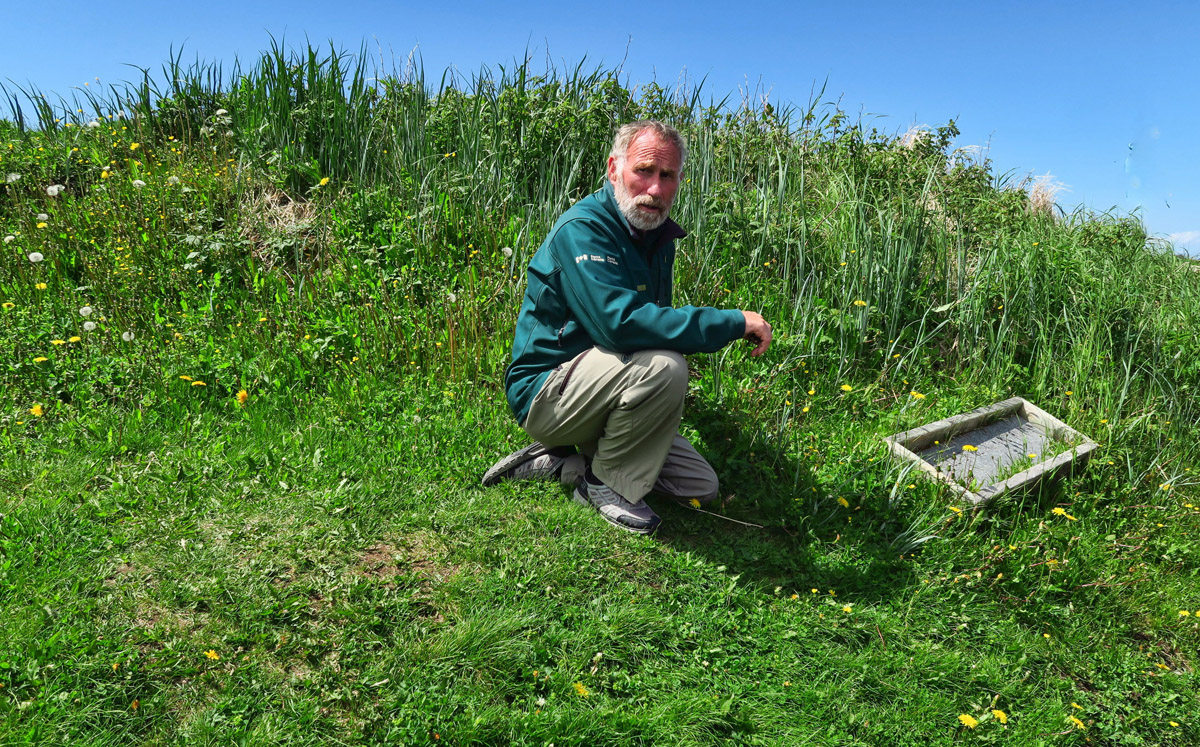 This is Clayton, our guide. Like most Newfies, he’s a great story teller. 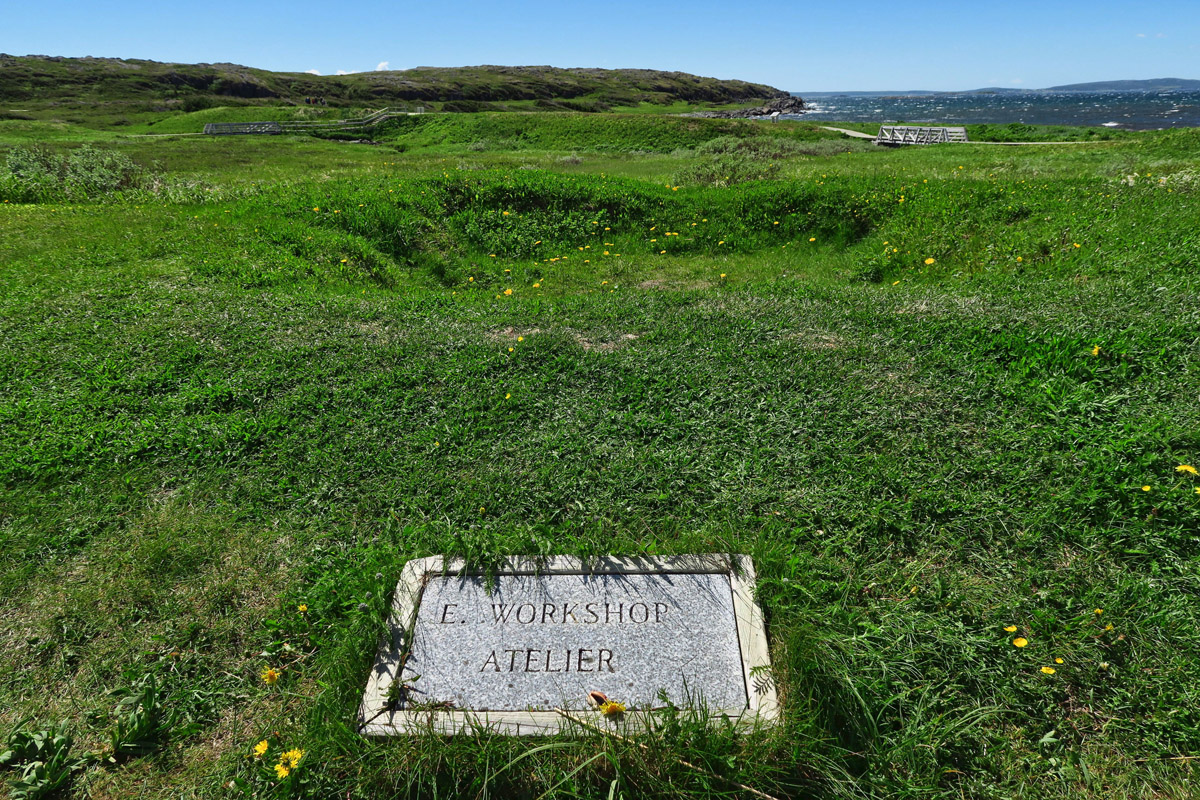 Beneath these mounds are the location where they found some semblance of structure and artifacts that led them to believe “Leif was here.” 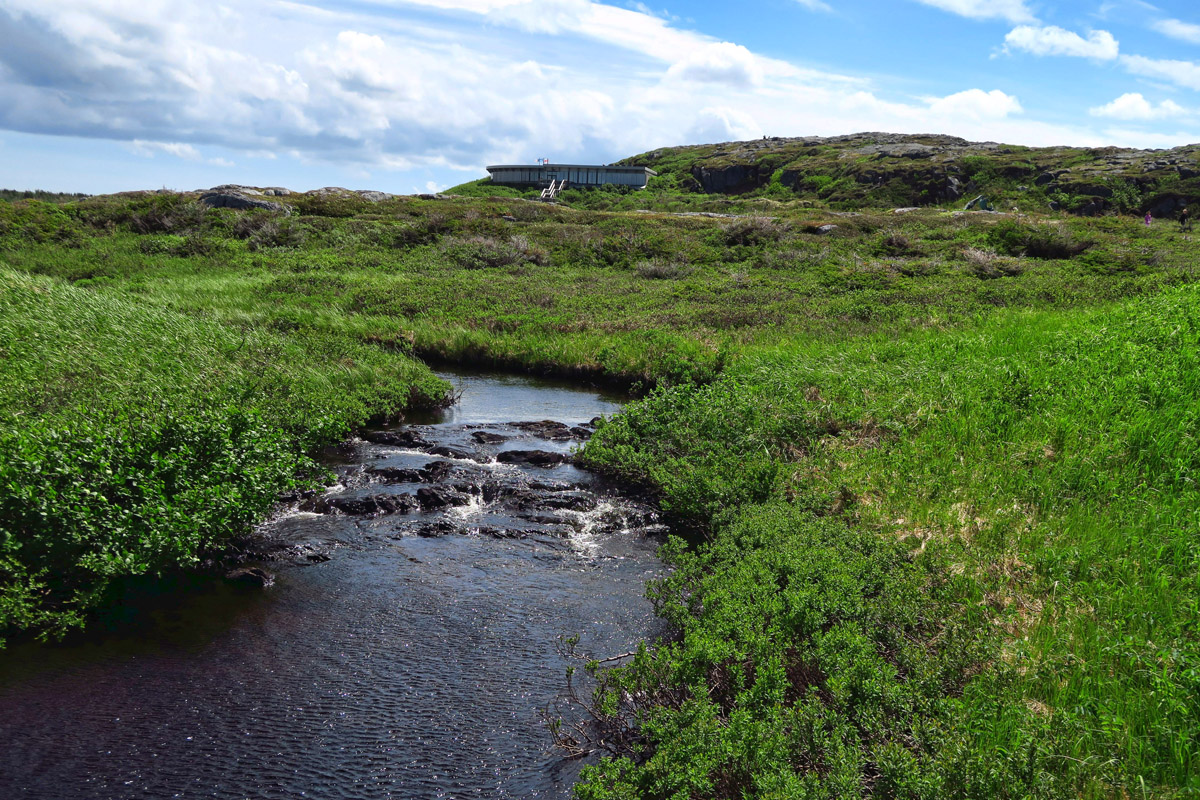 Clayton tells us this stream was once full of salmon. That’s the L’Anse aux Meadows Visitor Center in the background, up on the hill.

Clayton tells us of his excitement when the Norwegian archeologists came to the area in 1960 and began the excavations.  They identified eight complete house sites beneath the mounds indicative of the sod house style found in Iceland and Greenland, which led to the belief that this was a Norse landing site back in 1,000 AD.   Then they covered them back up for preservation. 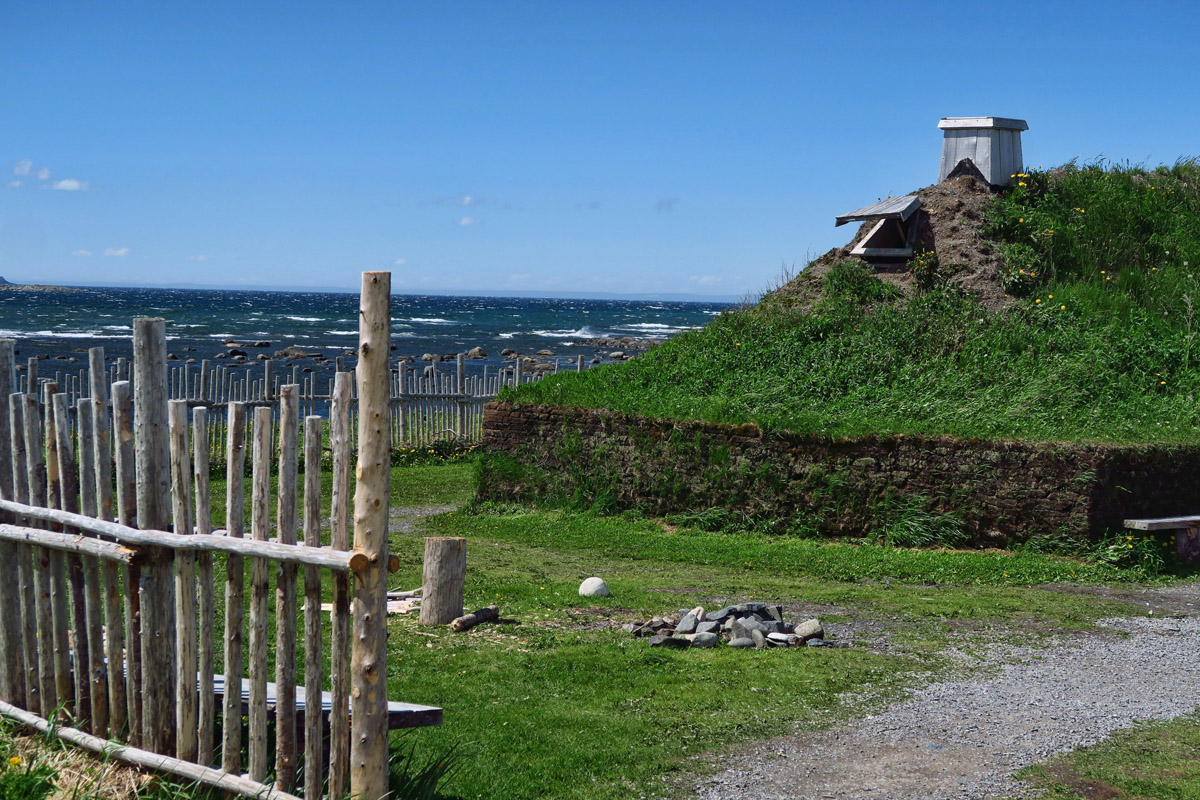 They have recreated a complex of sod houses to look like they thought the camp would have looked, based on drawings in the Norse Sagas. 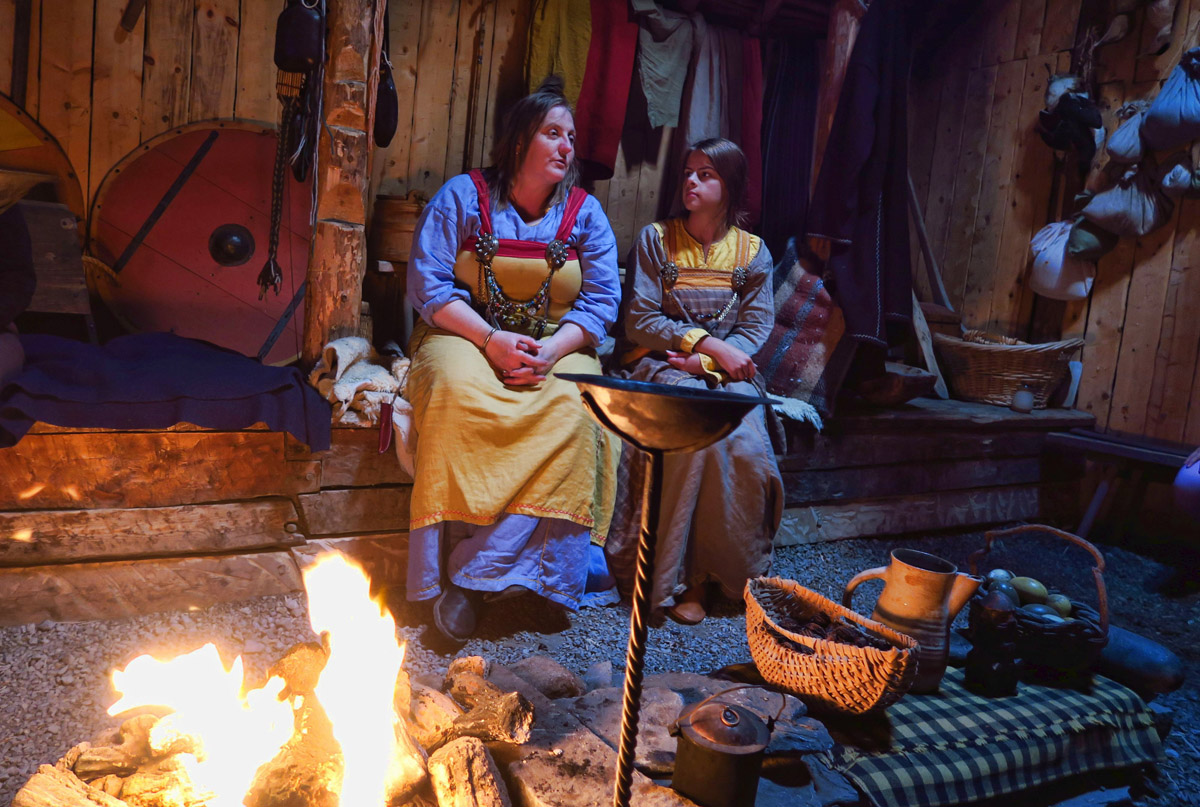 Pay no attention to those gas jets in the fireplace. 😉

To an archeologist, the artifacts found; a cloak pin, part of a spinning wheel and a bone knitting needle, are evidence enough.  But to the skeptic like me, I need a little more help tapping into my imagination, so I visit the “reenactment” where costumed Viking interpreters welcome me into the reconstructed sod and timber houses.  Though the interpreters stay in character the entire time, they rotate positions with the interpreters behind the counter at the Visitor Center.  It’s tough for me to suspend disbelief when the young Norse daughter in the sod house gave me directions to a boondocking site last night.  😉 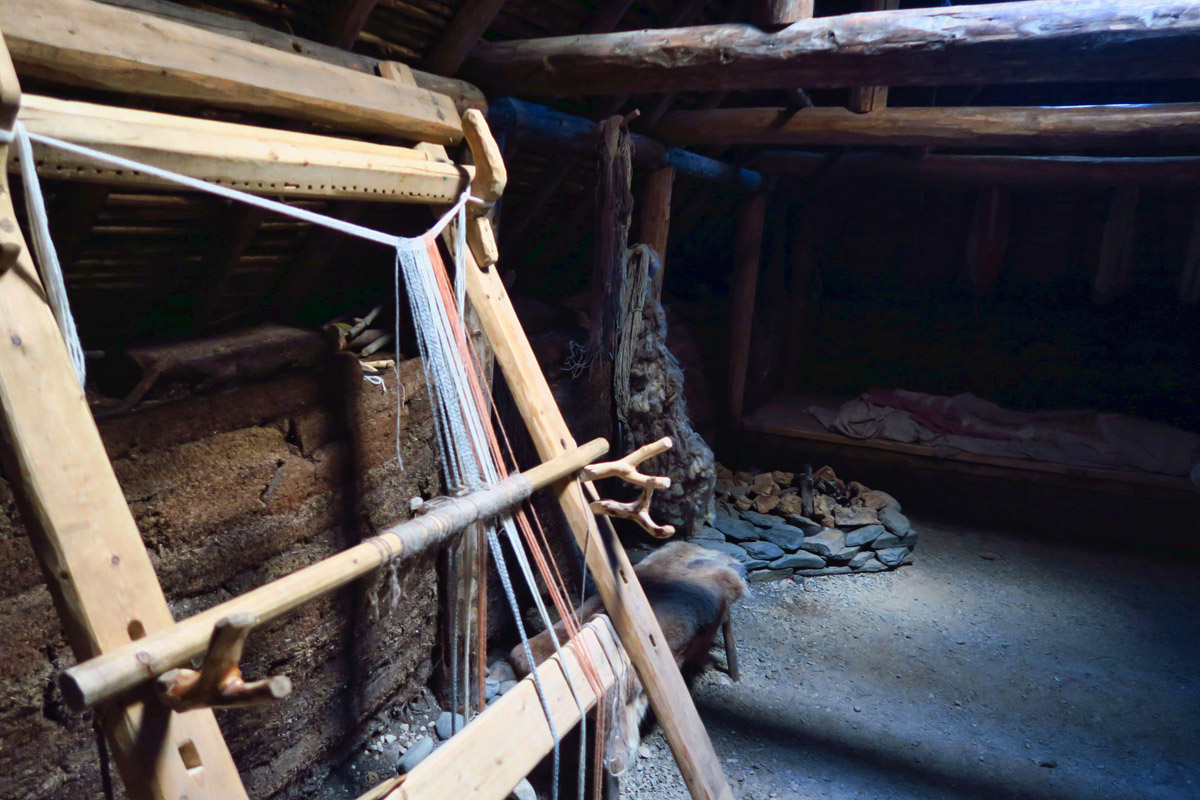 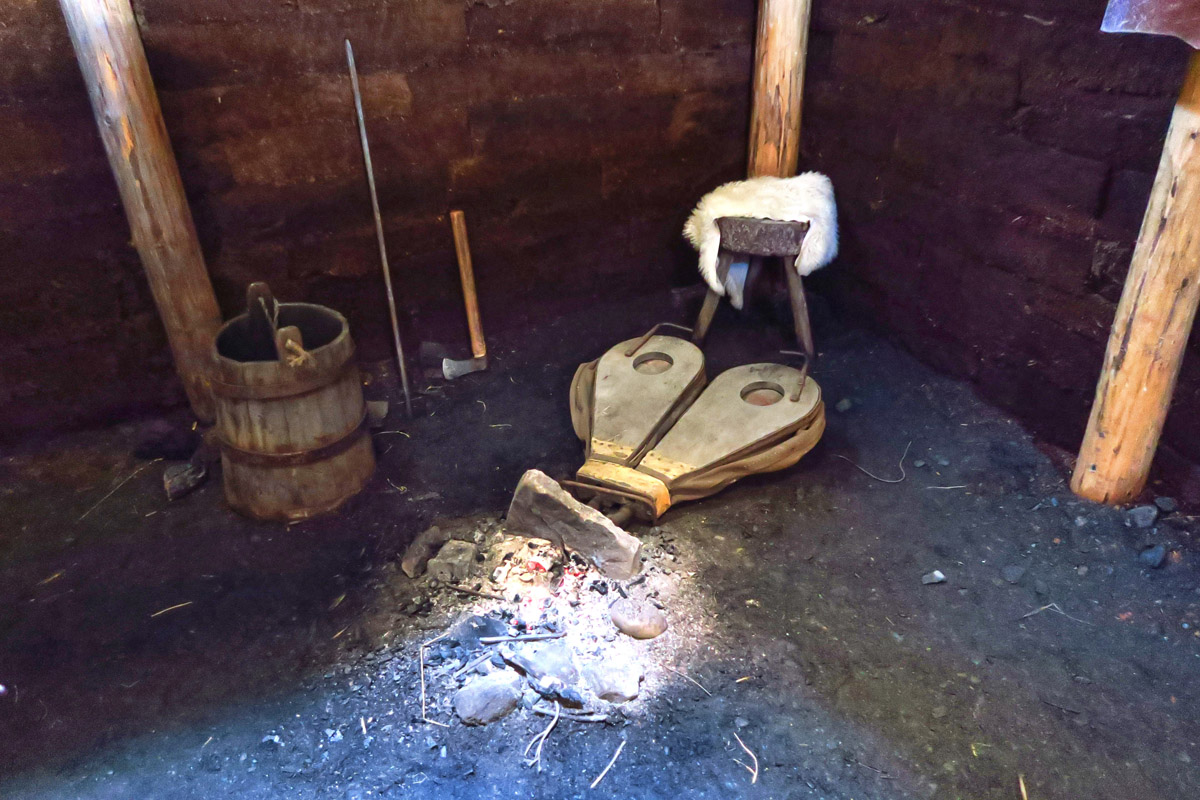 These were the largest bellows I’ve seen. These were believed to have been used to raise the temperature of the fire for iron smelting. 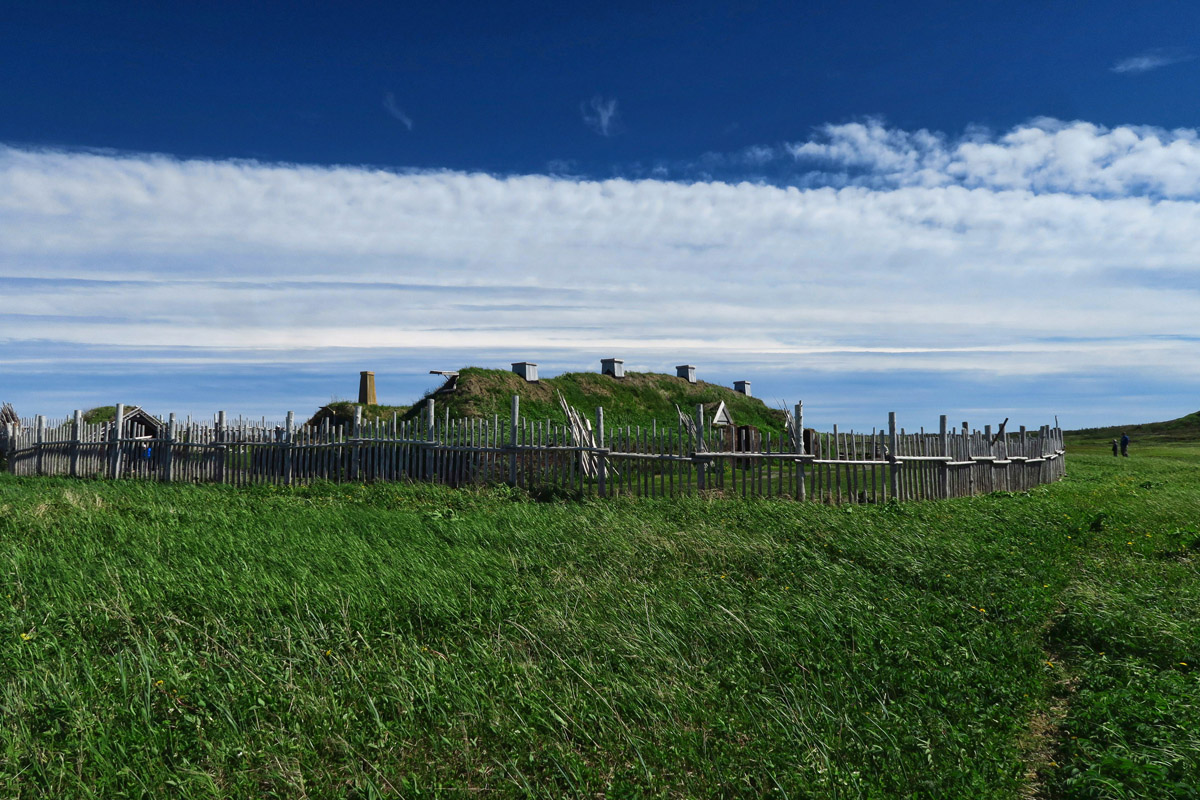 View of the sod house complex.

I leave L’Anse aux Meadows on the absolute windiest day I’ve driven yet.  Gusts are so strong that I dare not swerve to avoid a pothole for fear I could lose control, and must drive way below the speed limit. But I have a reservation on the ferry bound for Labrador in St Barbe, ninety miles away.  I consider changing it, but I’ve already been in this wind for two days now, and I am ready to move on.  There are white-capped waves on the Strait of Belle Isle, the body of water between Newfoundland and Labrador.  I do ask the woman at the ferry terminal if there is a chance it will be canceled.  But I am starting to learn that 50mph gusts to “Newfies” is just enough to keep the bugs away. 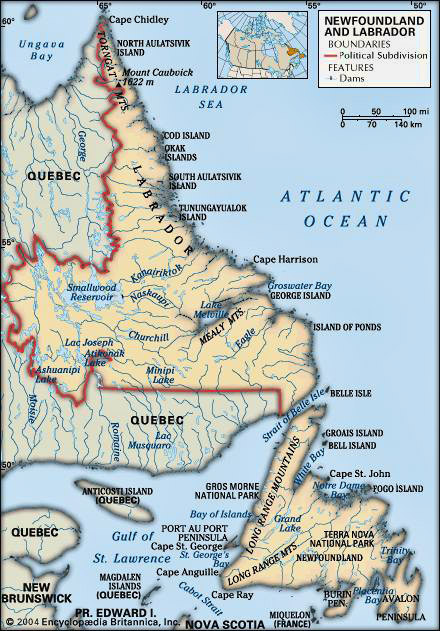 This map, borrowed from Encyclopedia Britannica is a good depiction of how Newfoundand (the island) and Labrador (the mainland) are separated.

Newfoundland and Labrador make up the same province, but the distinction is Newfoundland is an island, whereas Labrador is on the mainland, bordering Quebec.  They are separated by the Strait of Belle Isle which is at its narrowest point, is just 10 miles across.   The ferry actually lands in Blanc Sablon in Quebec, about five miles south of the provincial line with Labrador. 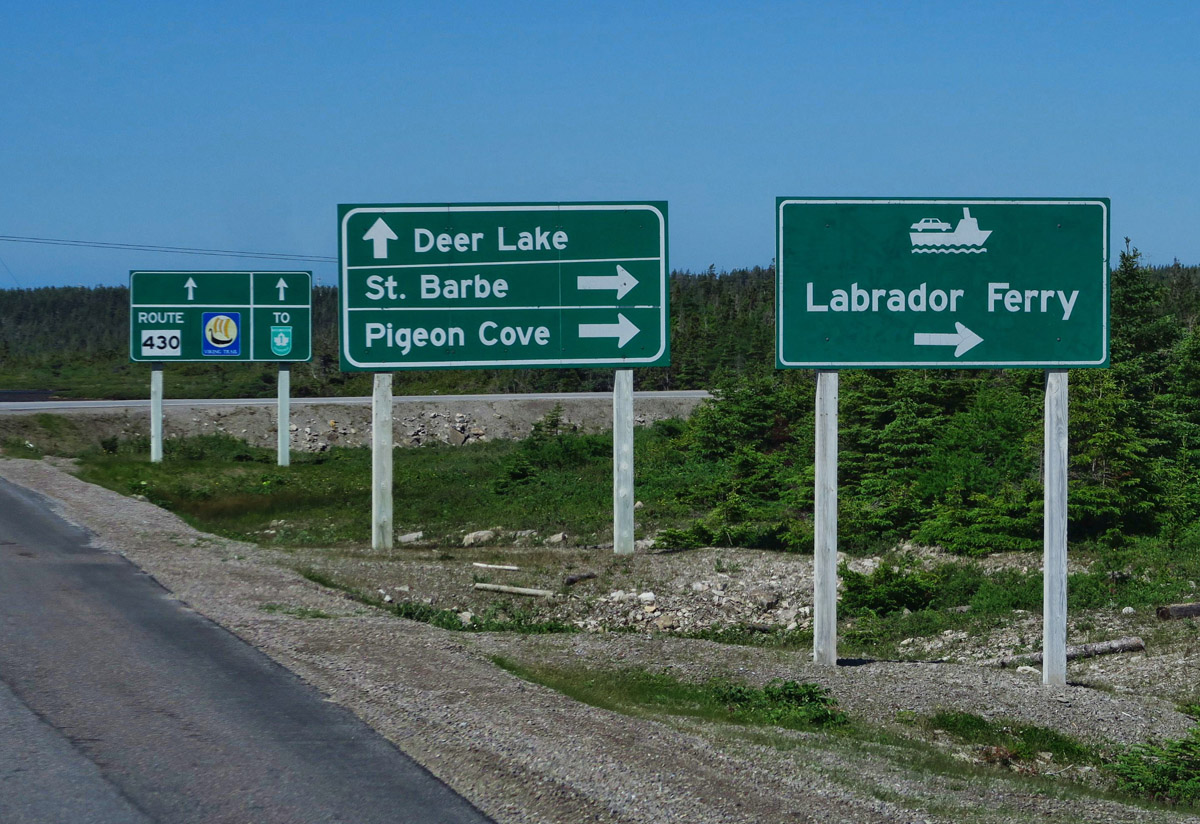 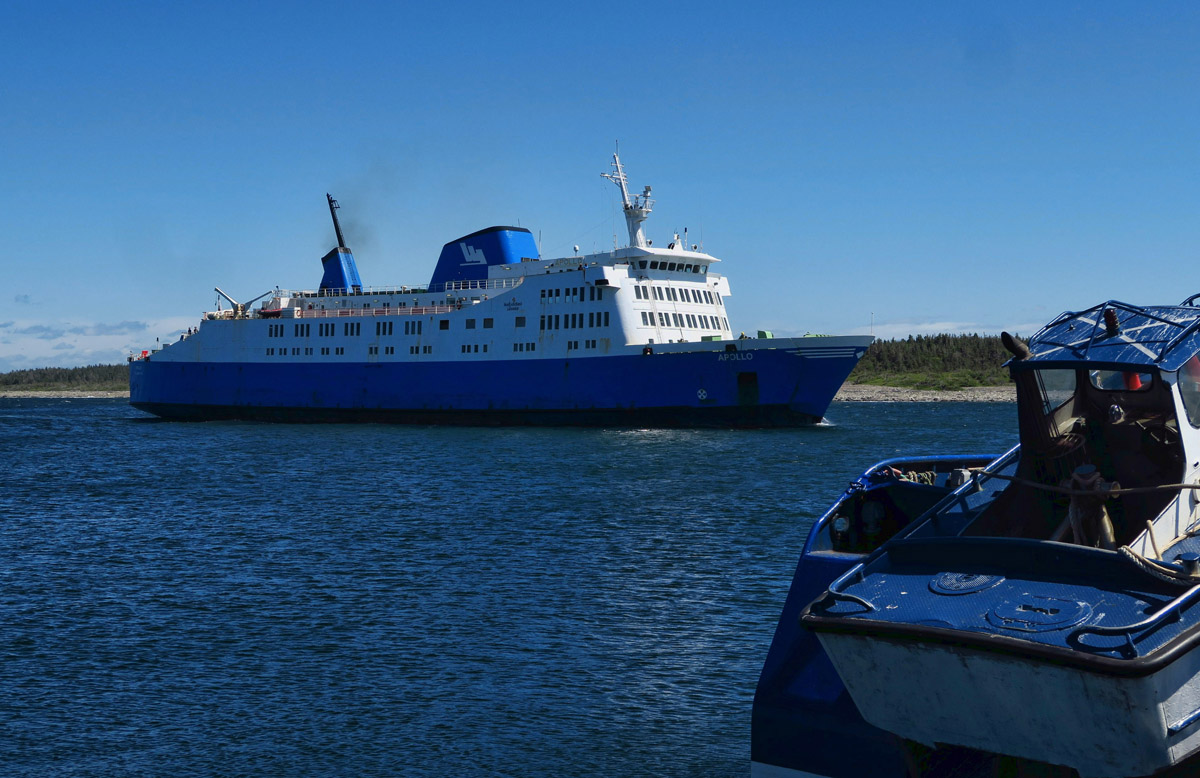 It’s a much smaller ferry on this crossing than from Nova Scotia, which doesn’t do much to quell my fears over the high winds. 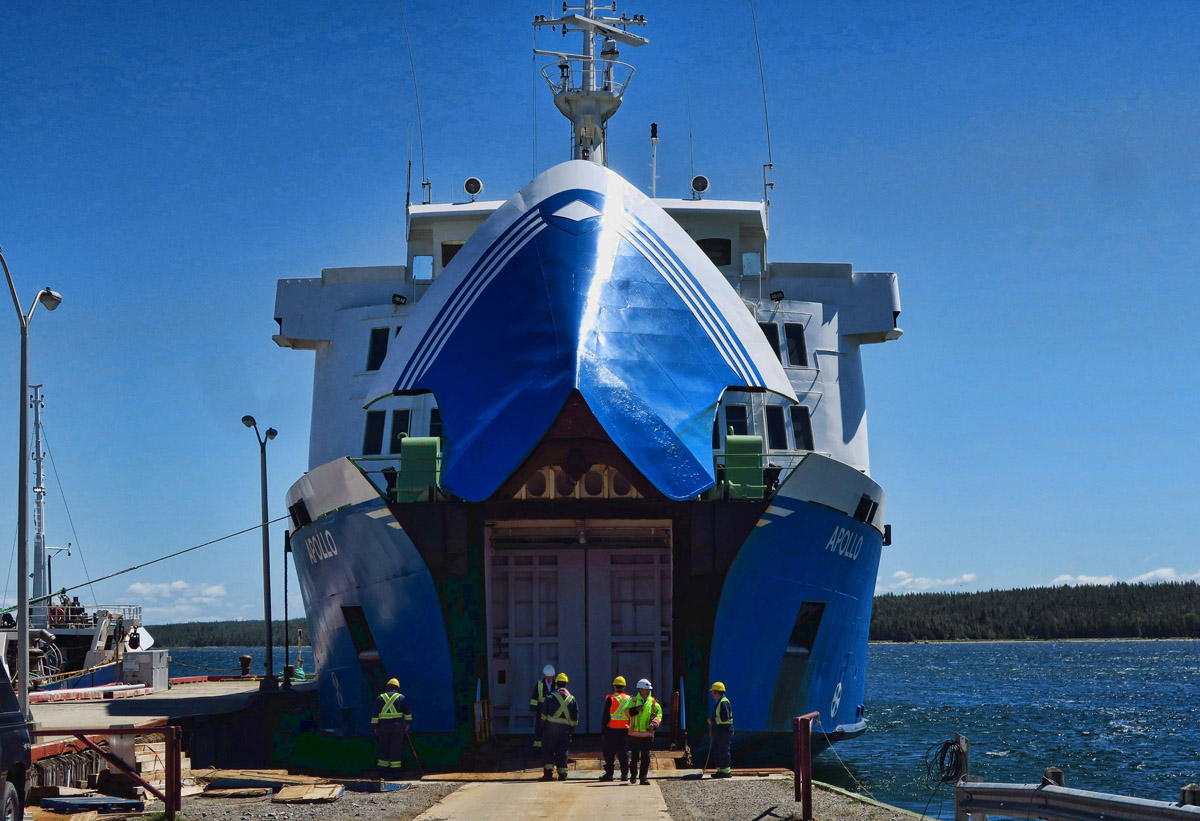 We actually load into the bow of the boat. Strange to see it raise up and the giant doors open. 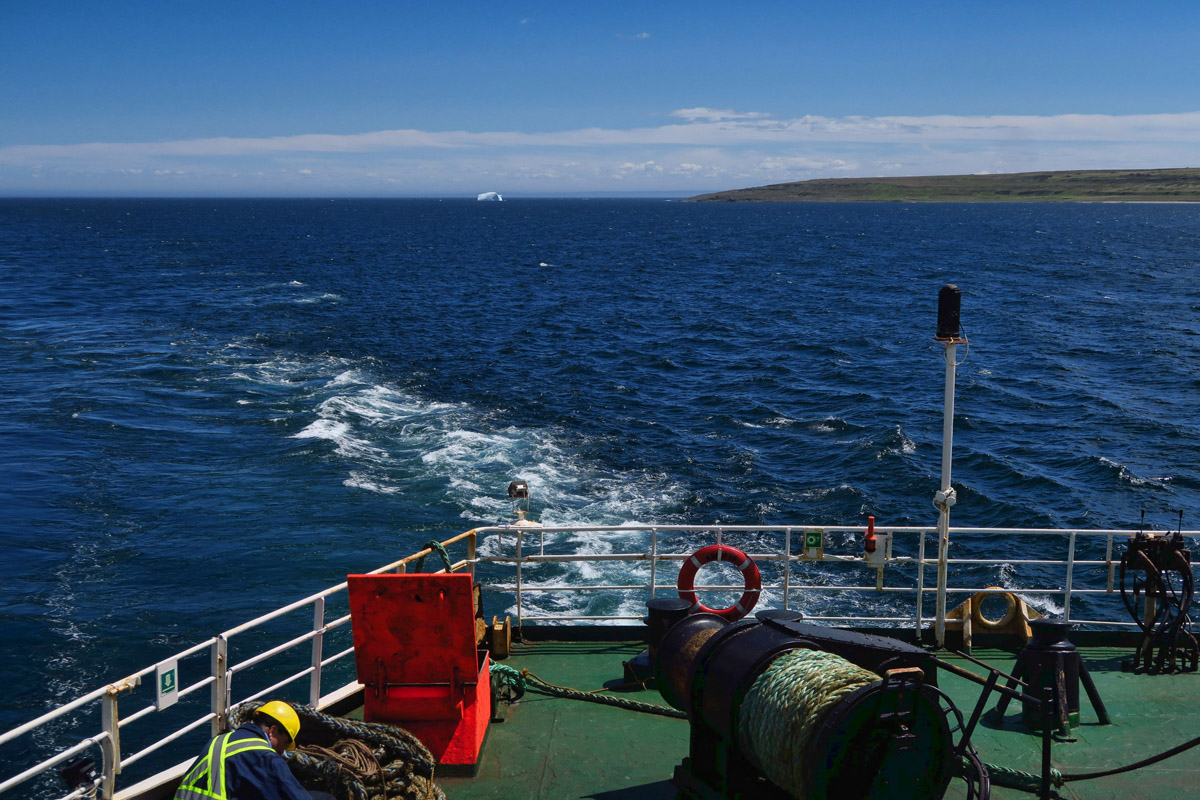 A few iceberg sightings along the way. 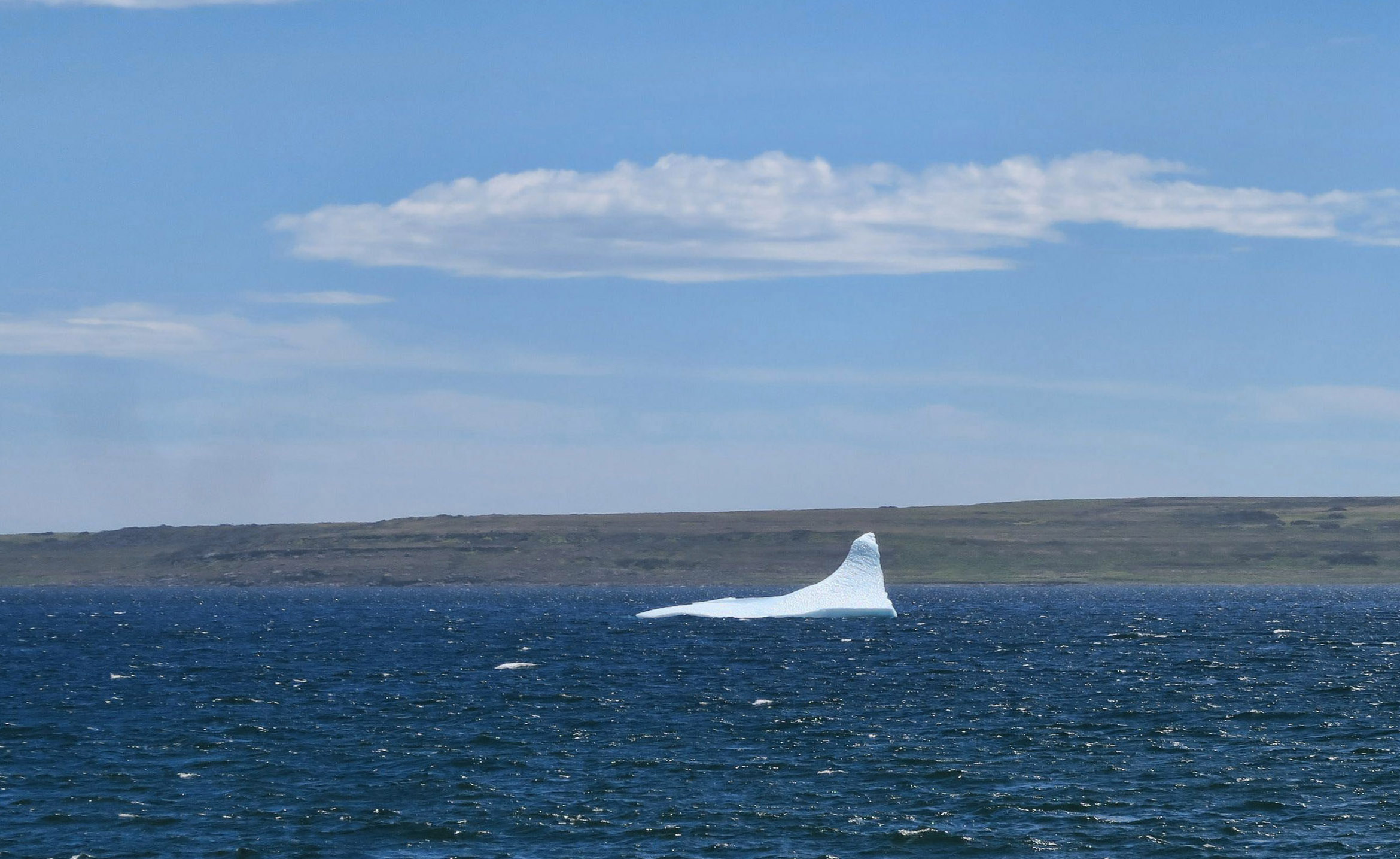 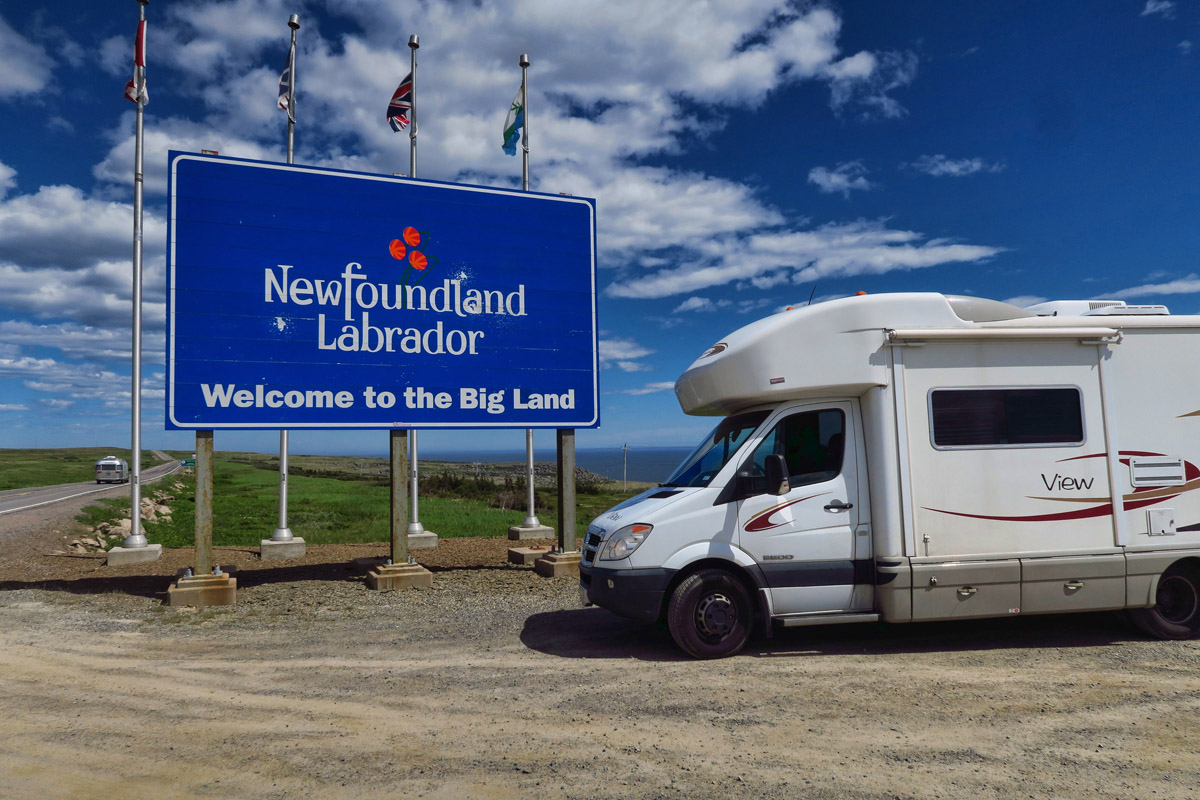 Welcome to “The Big Land”….of potholes! 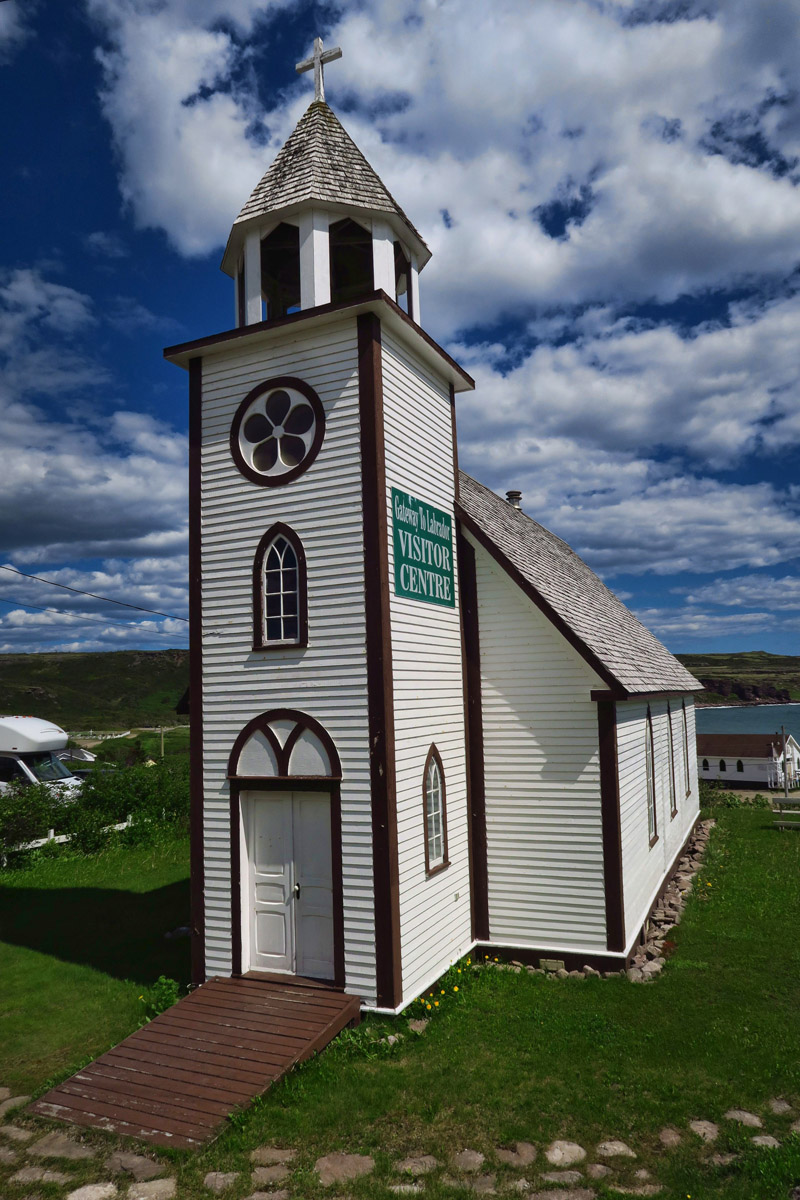 Some might say there are as many reasons NOT to visit Labrador as there are to go.  It requires a ninety minute, sixty dollar ferry ride to cross.   The roads are deplorable….and that’s just the 30 miles to Red Bay.  After that, it’s a dusty gravel road if you want to go further.   So “exploring” the province is limited.

But there are things on Labrador I want to see.  For one, there’s Canadian Atlantic’s tallest lighthouse, now a National Historic Site.  And there’s also Canada’s newest UNESCO site, Red Bay.  Besides, visiting only half of a 2-part province just feels “half done.”

So fasten your seatbelts, my friends, it’s going to be a bumpy ride! 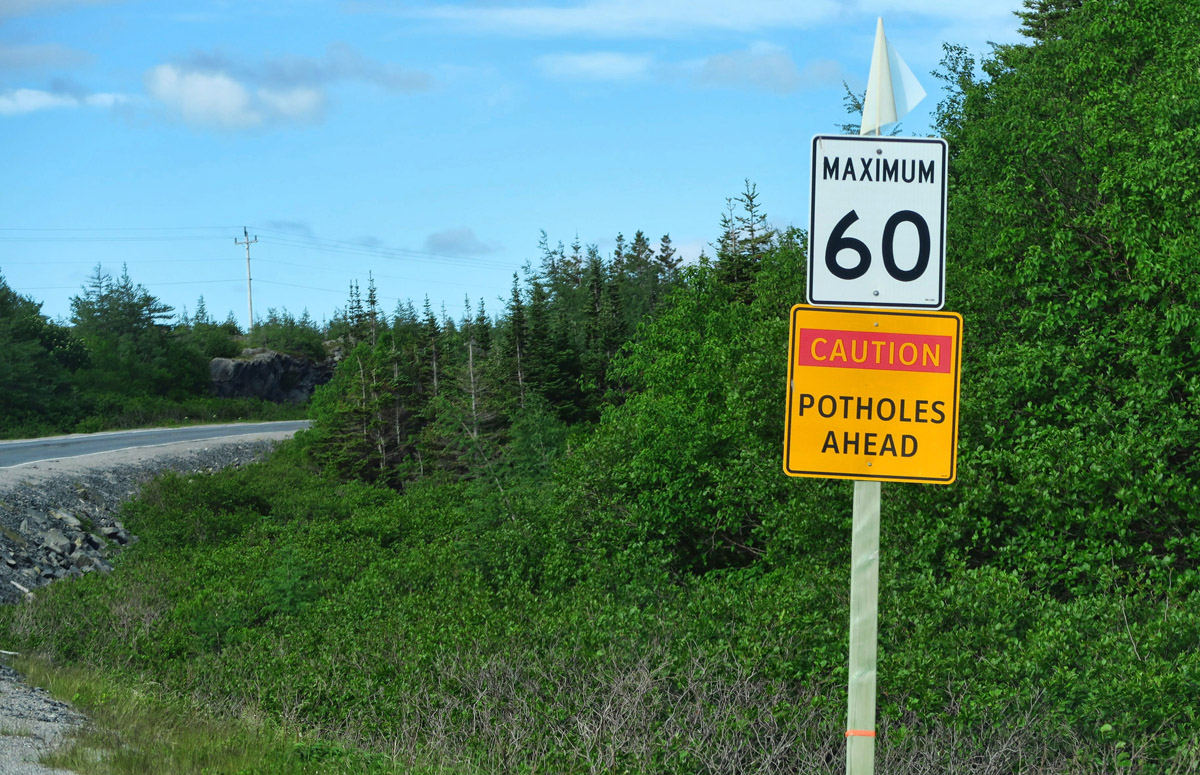 These signs will become very familiar… 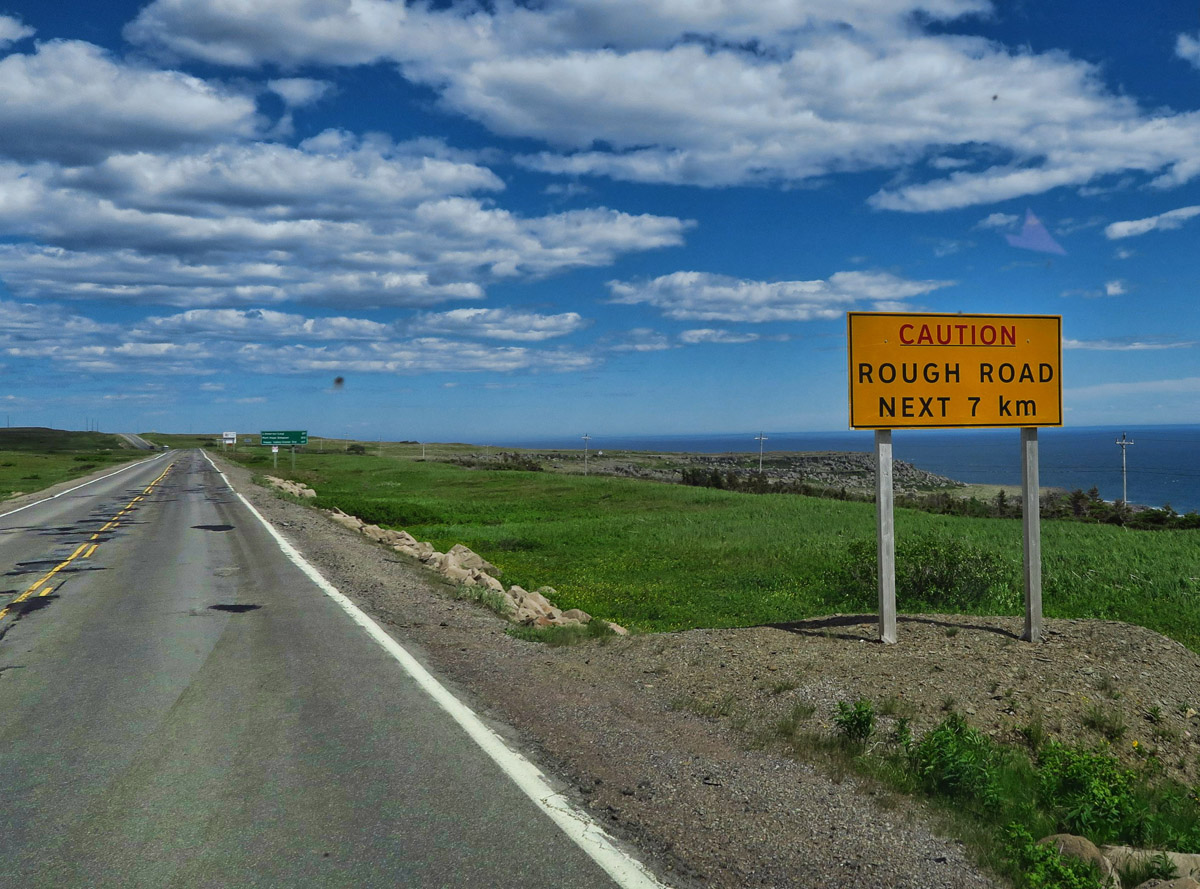 Only seven kilometers, they said… 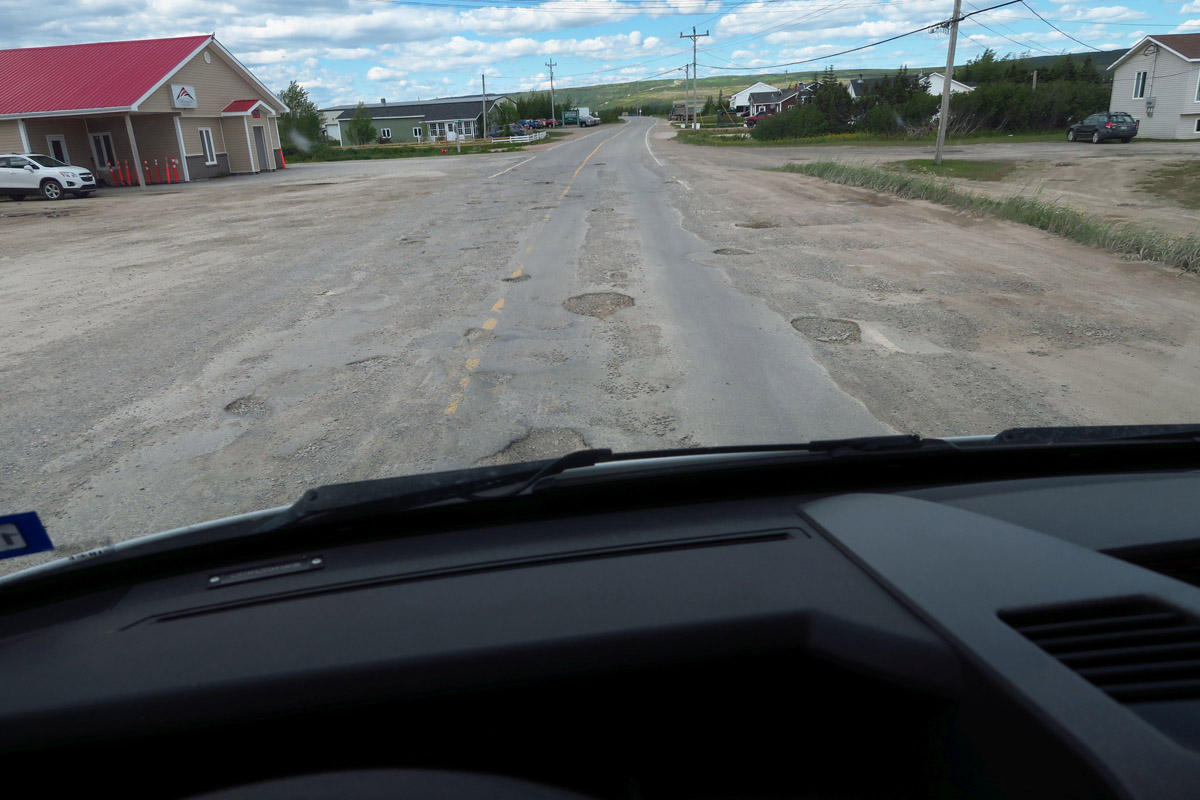 It gets worse, but then that requires two hands on the wheel… 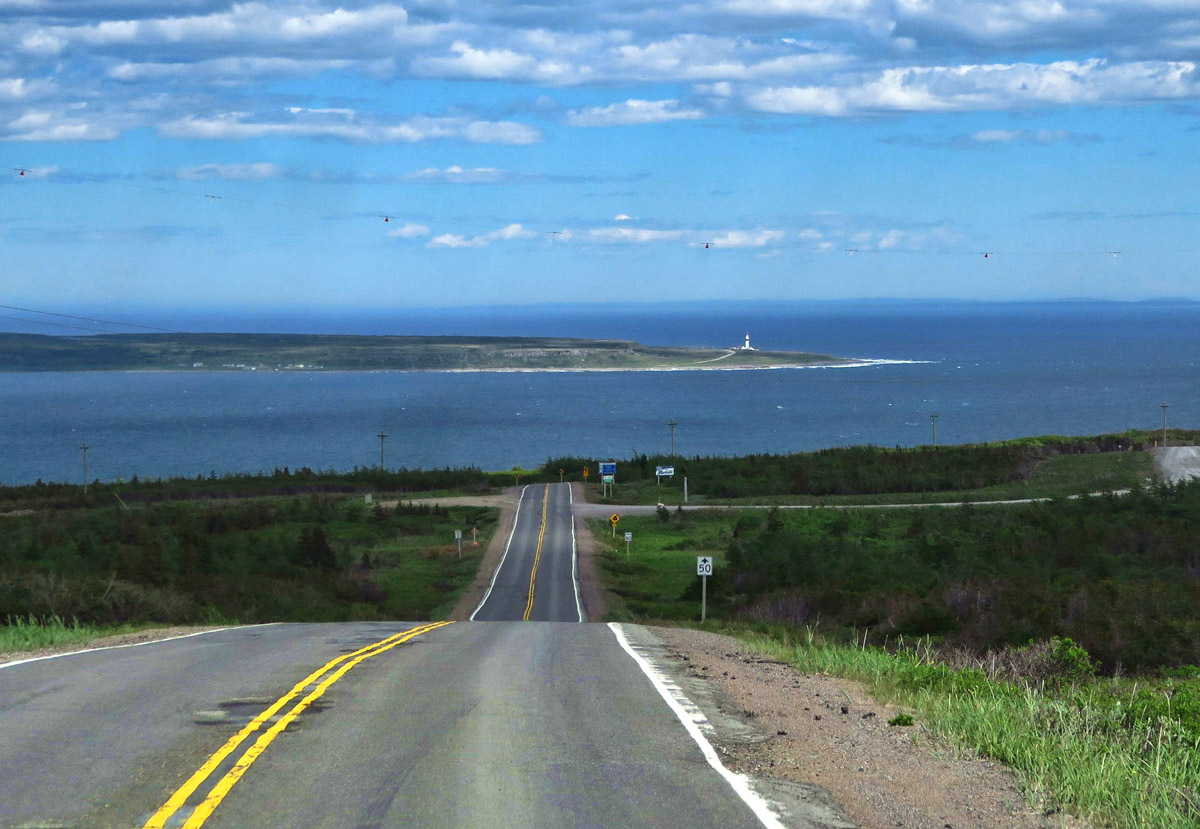 There is where I am headed next…can you see it? Standing tall at the end of the point?