Red Bay, up the rugged coast of Labrador, is one of Canada’s newer UNESCO World Heritage Sites.  Awarded the UNESCO status in 2013, this sheltered bay was once a thriving whale fishery, driven by the demand for whale oil used for lighting and manufacturing in Europe.

Between 1530 and the early part of the 16th century, Basque people from Spain and southern France would travel over in the spring, setting up what was the world’s first industrial scale fishing industry, producing what was believed to be up to 20,000 barrels of whale oil during peak years.  By the early part of the 17th century, whale numbers had been decimated, thereby ending Basque whaling in Red Bay. 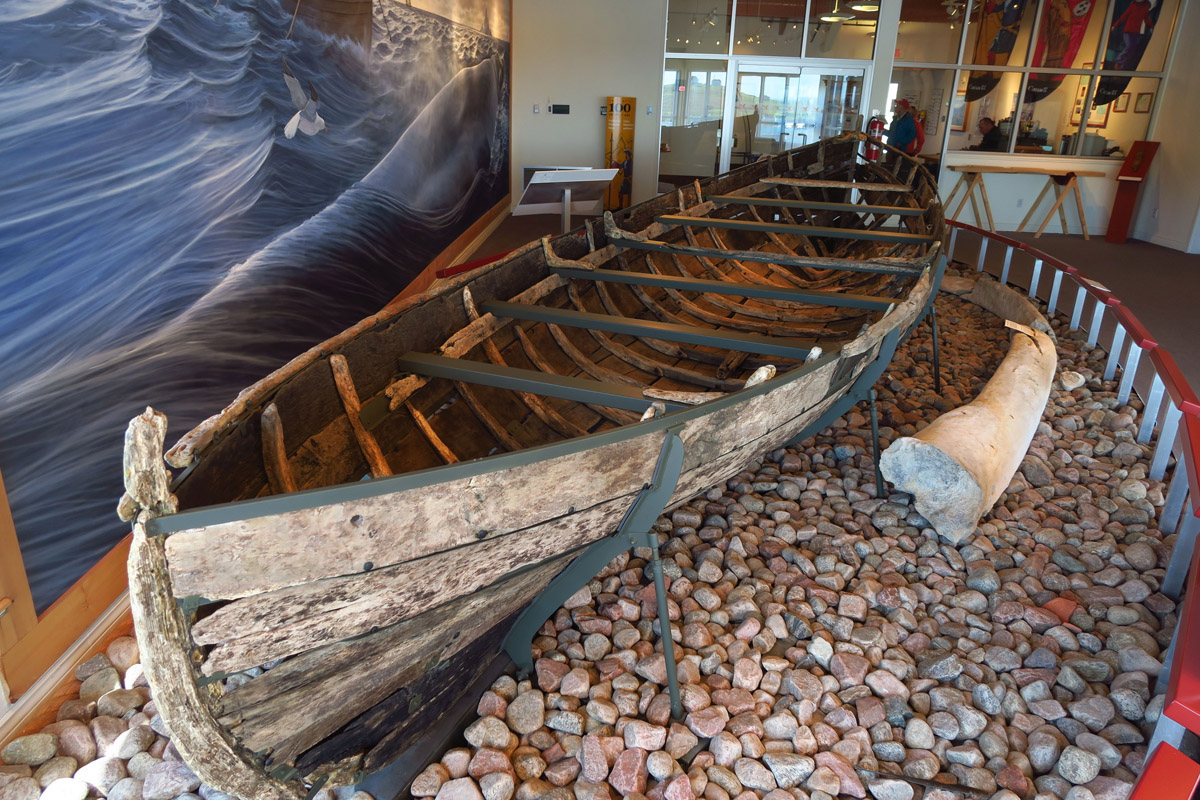 This 400 year old “chalupa” or wooden boat, was used by the Basque for hunting whales. 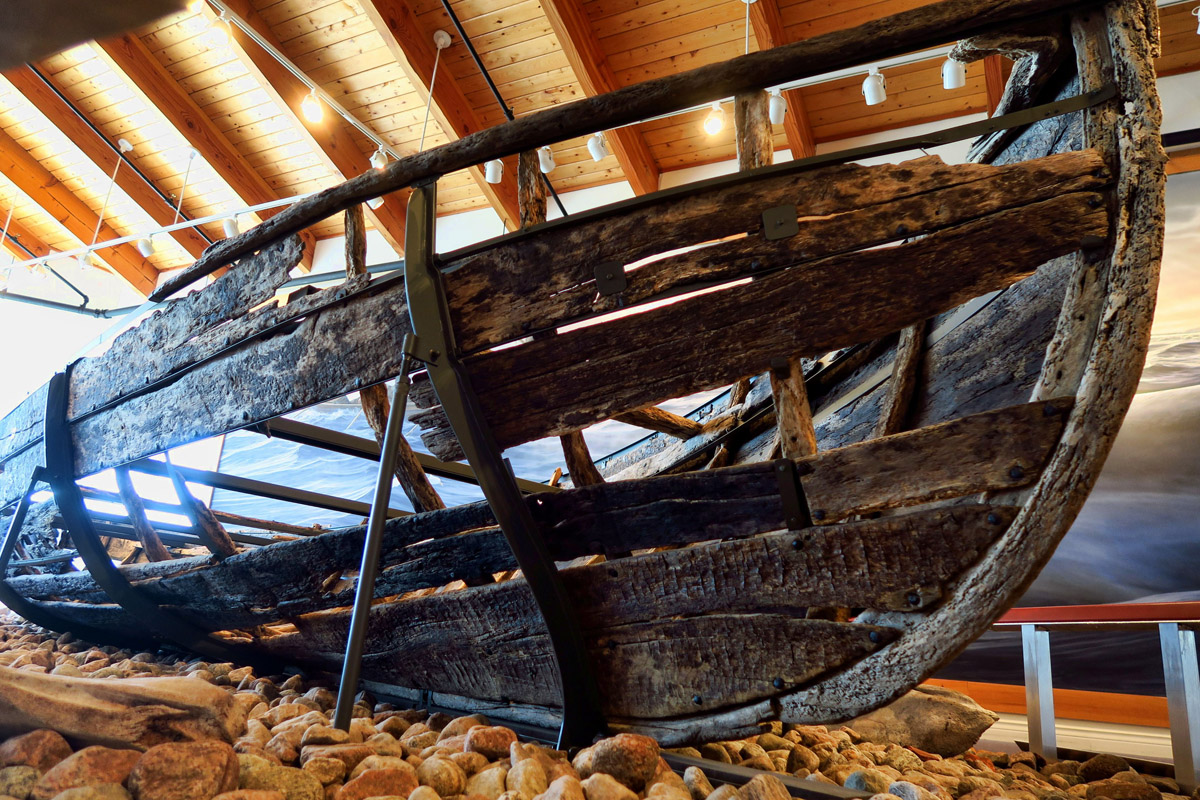 This is the actual boat retrieved from the harbor in the late 1970’s….not a replica. 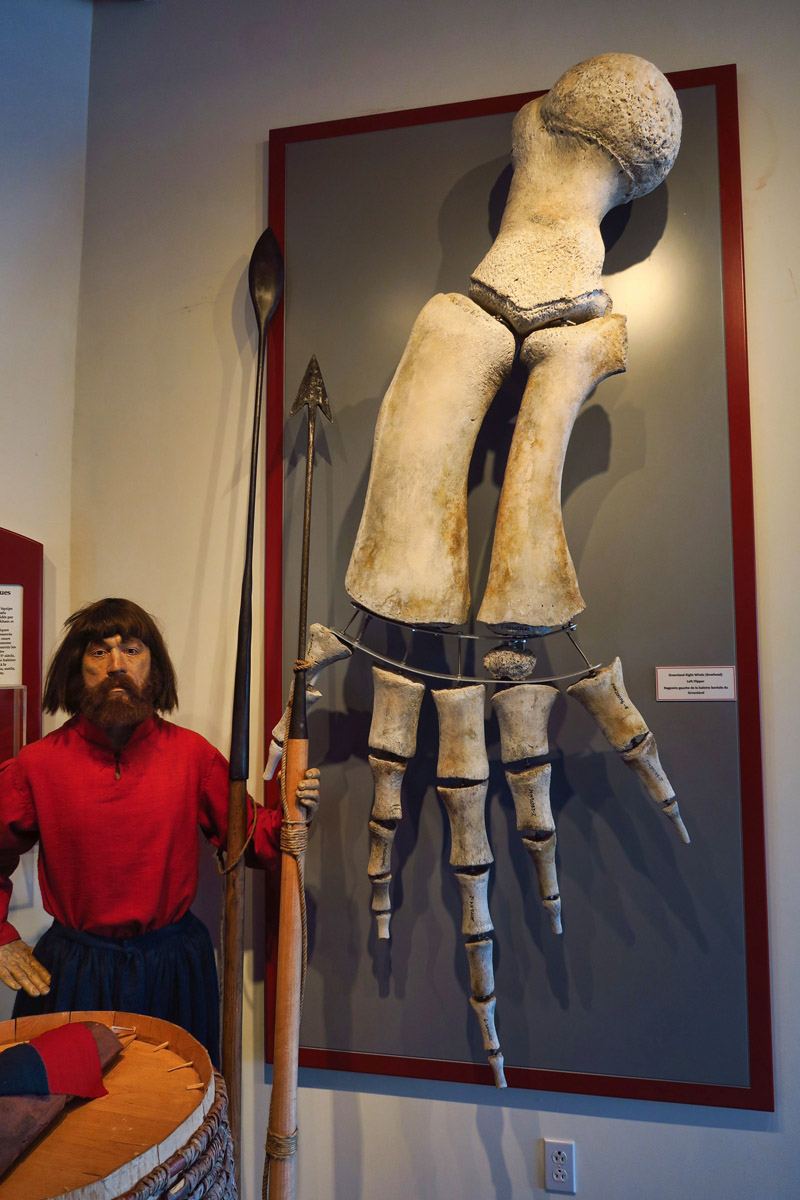 This bone skeleton is the left flipper of a Right Whale. The Basque model is wearing clothes reproduced based on those found in the cemetery. 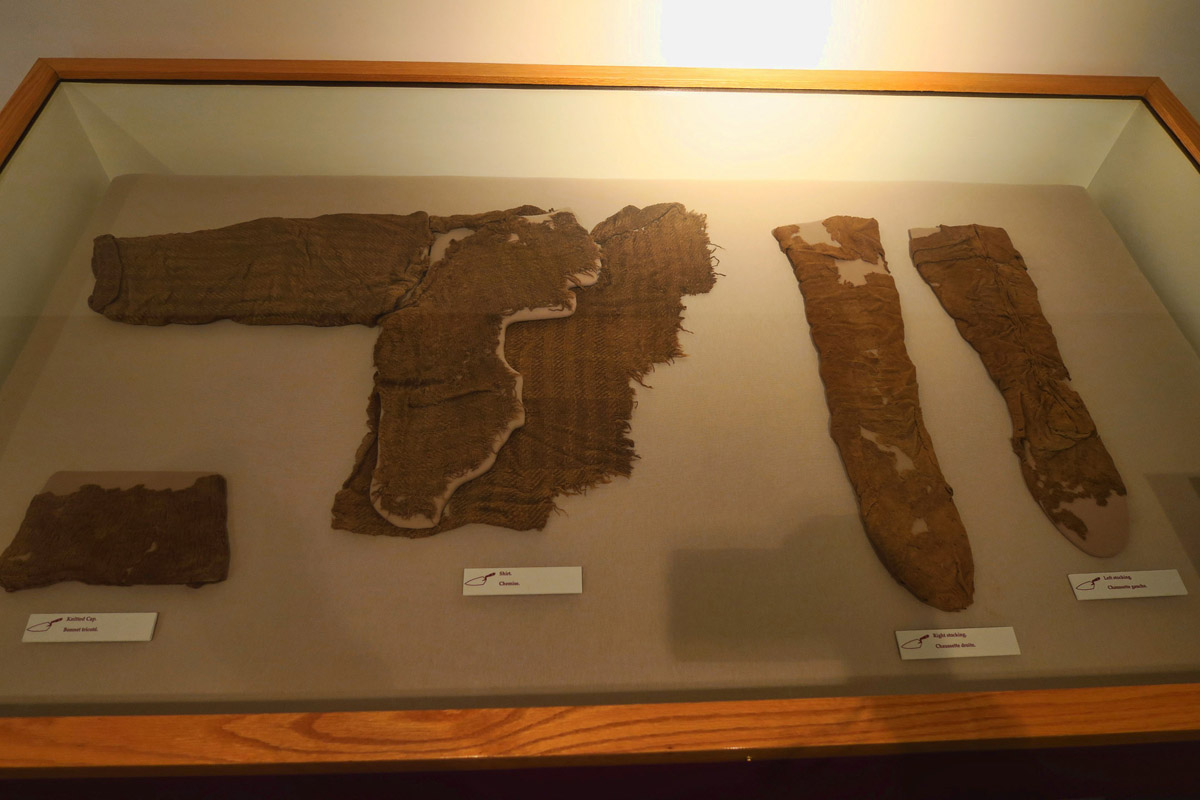 These are actual garments that were exhumed from the cemetery on Saddle Island. A woolen cap, jacket, and leggings.

Since 1977, underwater exploration has revealed four sunken 16th century whaling vessels in the Red Bay Harbour, along with several smaller boats.  Underwater archeologists removed a “chalupa,” or small boat used by the whalers to hunt and kill whales.  This actual boat now resides in the Red Bay Visitor Center.

The Red Bay exhibits are actually laid out in three different locations.  The smaller of these is the Visitor Center, but the artifacts found while excavating numerous whaling stations along the shores of Red Bay are housed down the hill at the two-story Interpretive Center.   The third site, Saddle Island, is just a 3 minute, $2 CAD boat ride away, where an interpretive trail makes a loop around the small island.  Here, they unearthed what were believed to be many rendering ovens where whale blubber was melted, cooperages where barrels were built for shipping the oil, buildings believed to be dwellings of the whalers, and 62 graves containing the remains of over 140 men and boys who didn’t survive the return trip to Basque country. 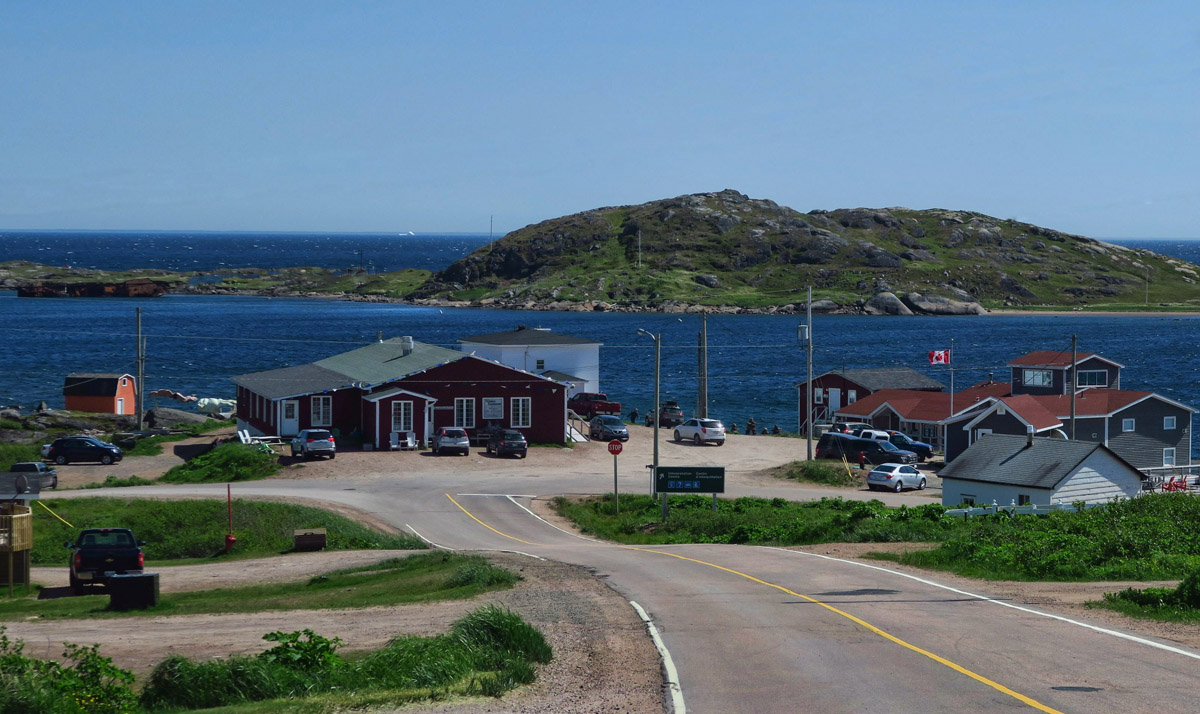 At the bottom of the hill is the Interpretive Center on the right, Saddle Island in the background, and Whaler’s Restaurant on the left, which my friends Ed and Marti have tipped me off to have the “best fish and chips in Labrador.” 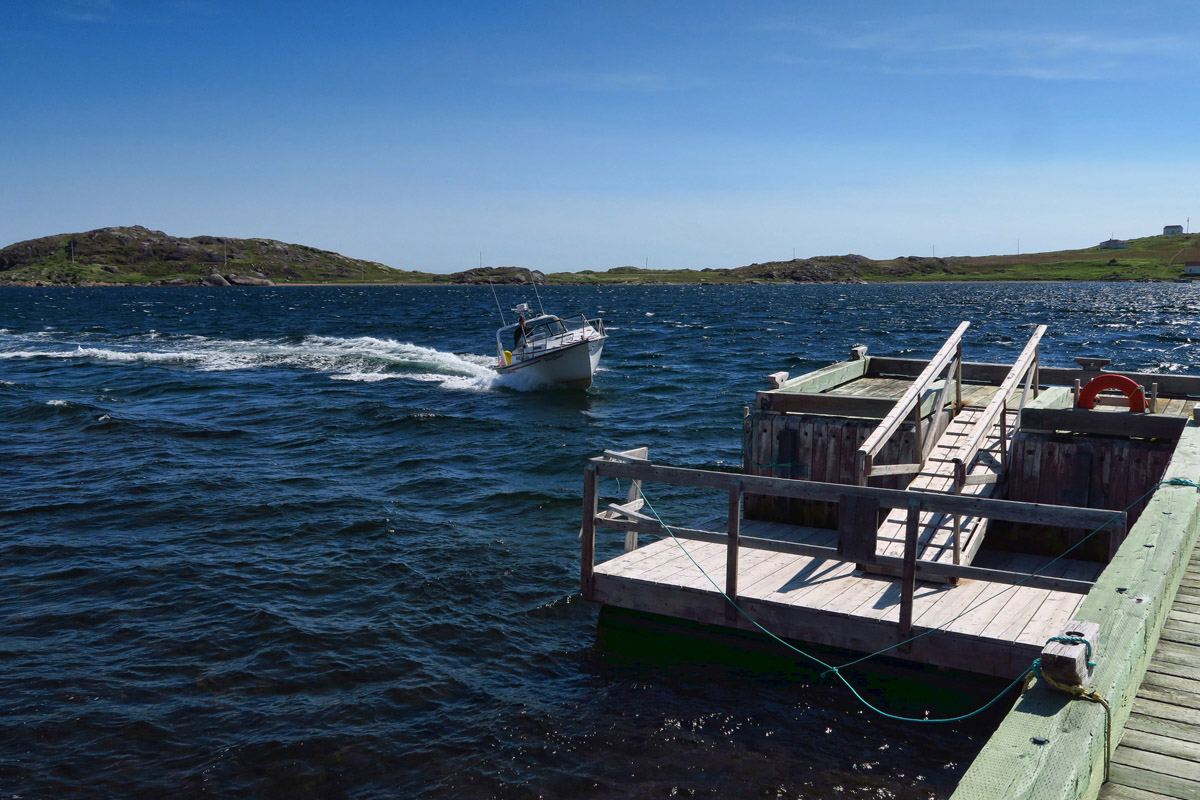 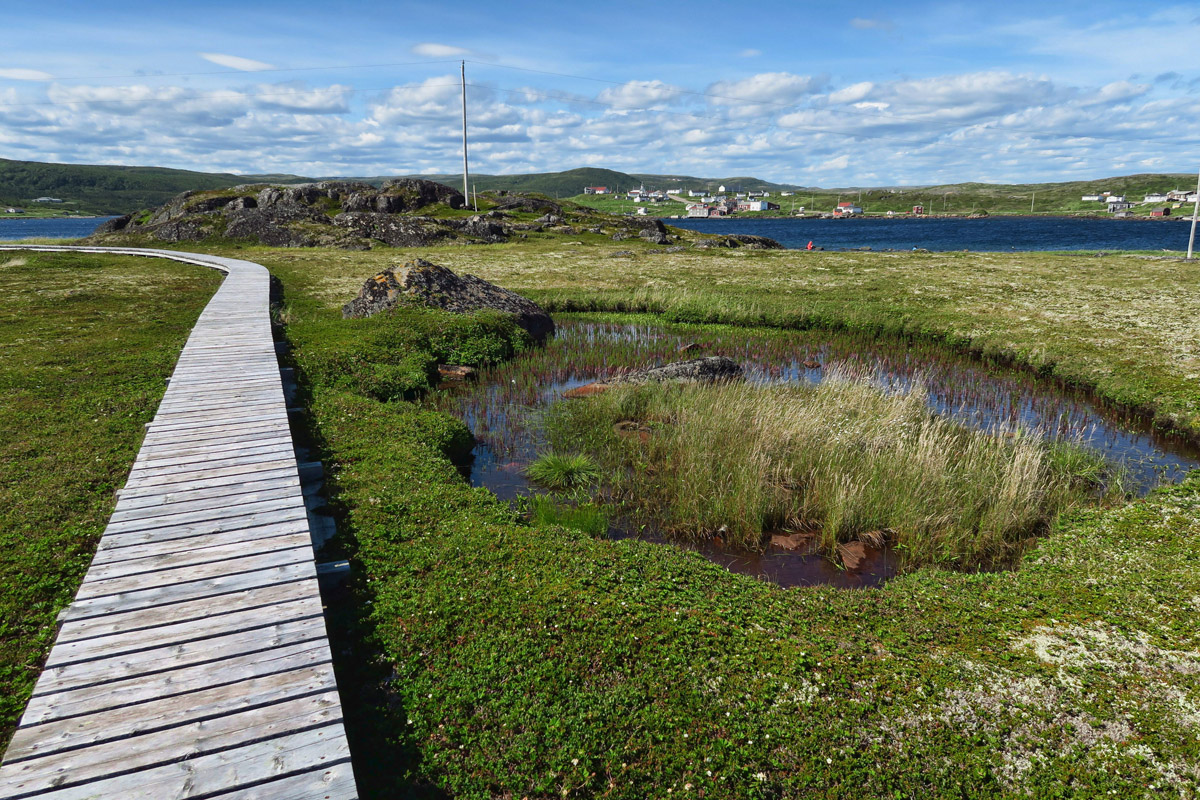 An interpretive path leads around the island showing excavated sights of the rendering ovens and whale skeletons. 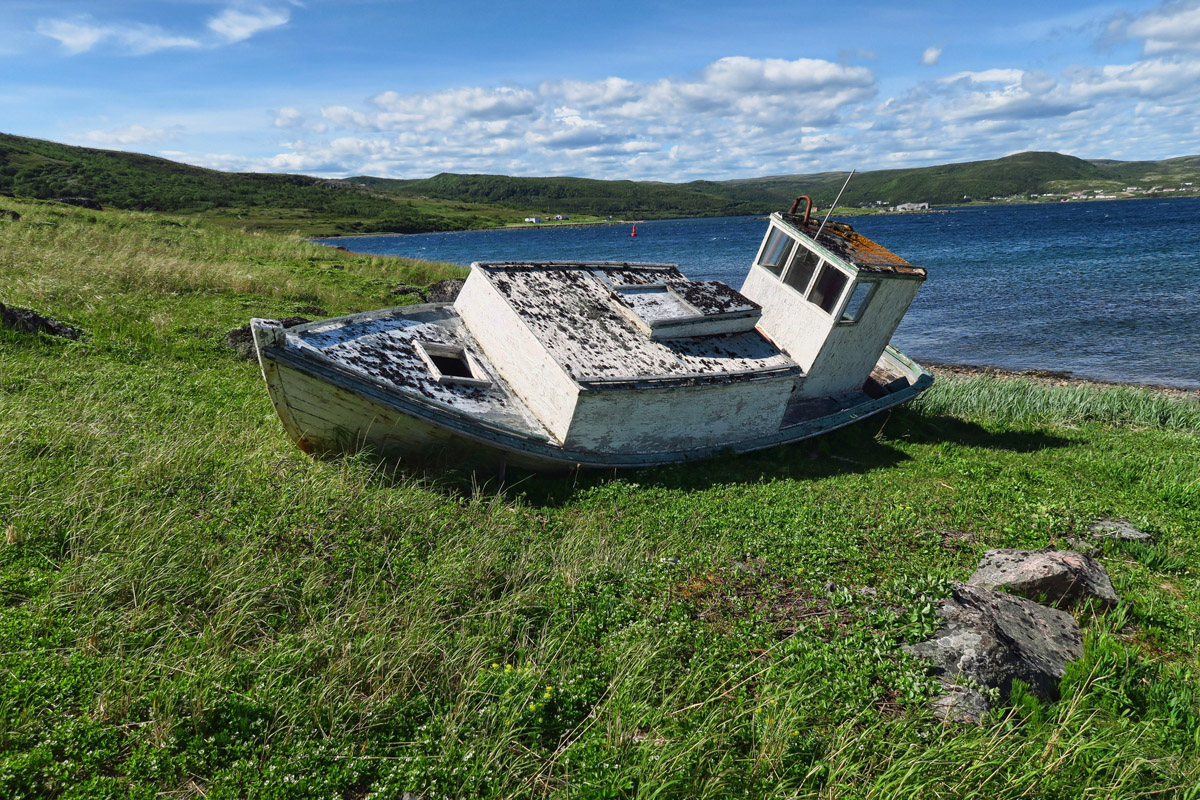 They believe as many as 800 men and boys may have come over each spring for the whaling season.

But the initial clue that led to the excavations was the broken red clay tiles that littered the beach of Red Bay.   Basque whalers were thought to have used these tiles for ballast on their way over to Red Bay, to be replaced by barrels of whale oil on the return.  The tiles were used on the roofs of dwellings and “tryworks,” or buildings over the rendering ovens where the blubber was boiled down to oil.

They primarily hunted the Southern Right whales because they were slow moving, and yield large amounts of oil.  Now on the endangered species list, they got their name because they were considered “the right whale to kill,” due to their high blubber content and propensity to float when dead, making retrieval of blubber easier.

On display in the Interpretive Center are a couple of harpoons and spears found during the excavation.   I ask the Park Ranger how such small men in this rudimentary boat, the chalupa, could actually land a 50 ton whale.  It is not a pleasant explanation.  The target on the whale would be to harpoon a large clump of blood vessels near the head, the heart, or the lungs.  The whale would eventually “bleed out” from the exhausting effort to free itself.  Sorry.  My visit to Newfoundland has been nothing if not eye opening to our full-on assault on the sea. 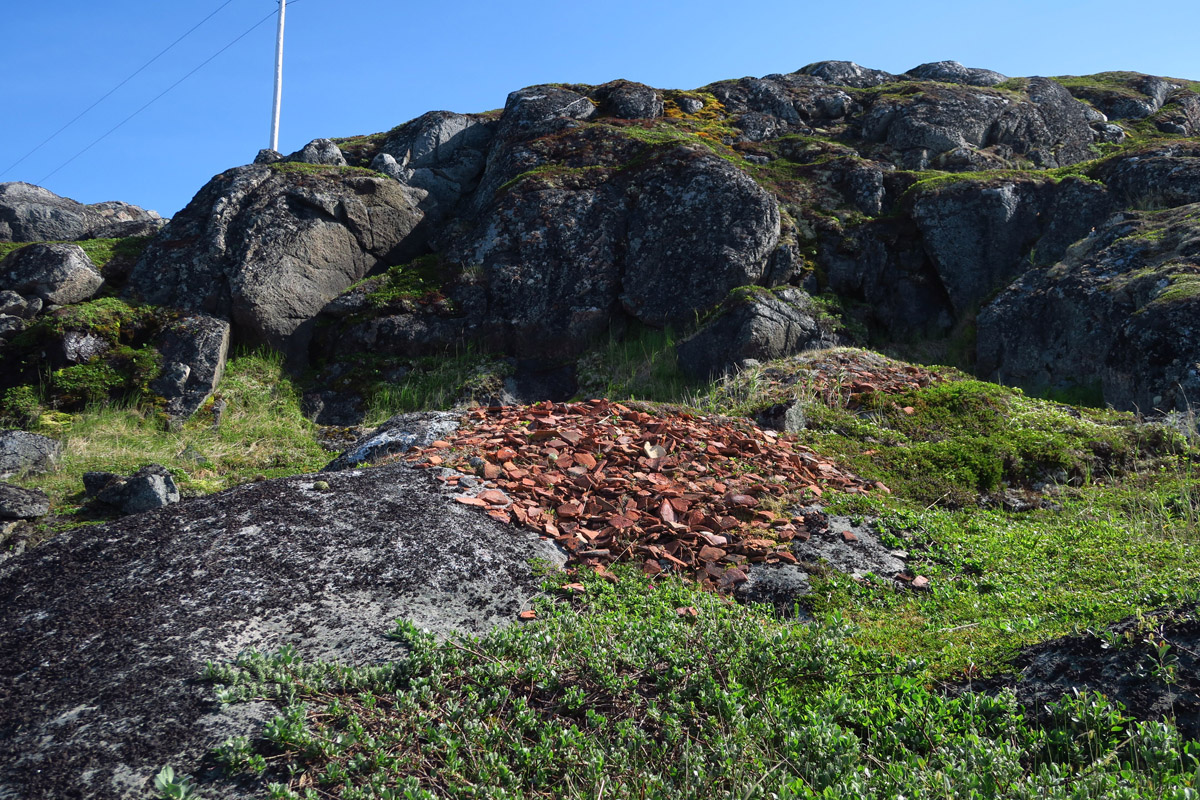 These piles of red clay tiles were believed to have been brought over by the Basques for roofing and temporary ballast. 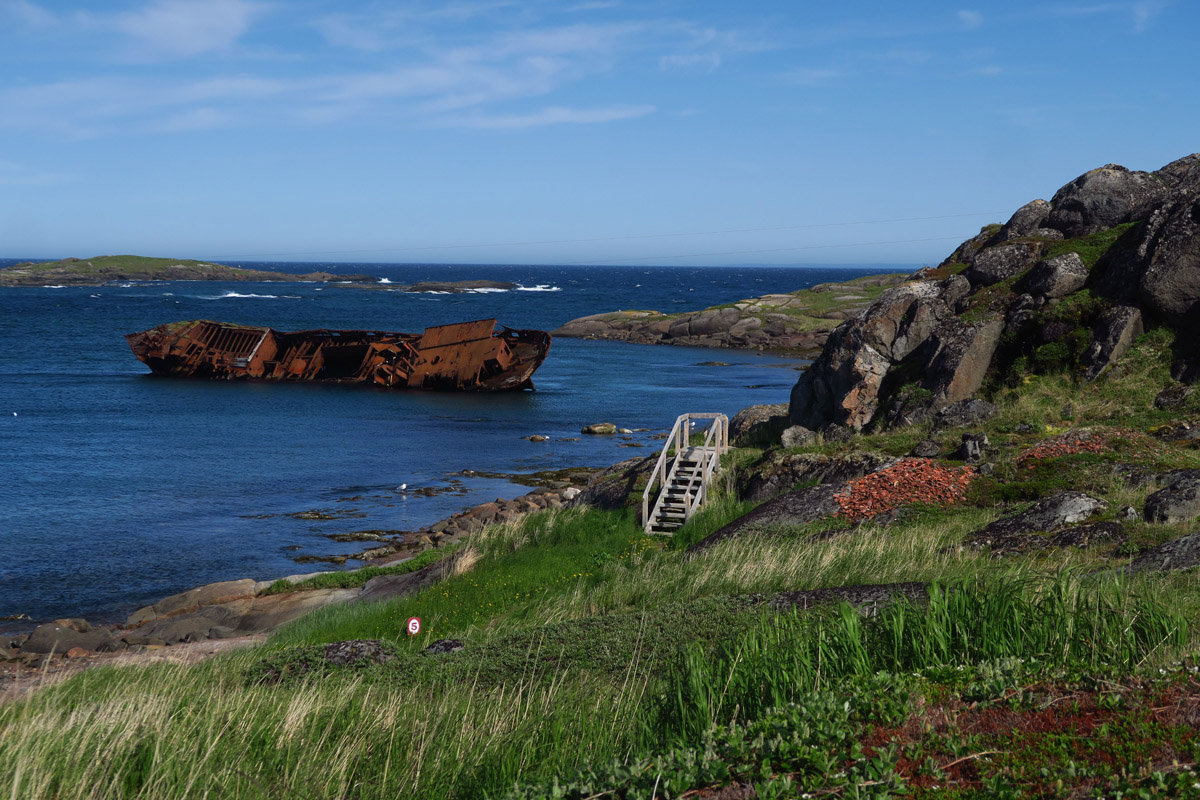 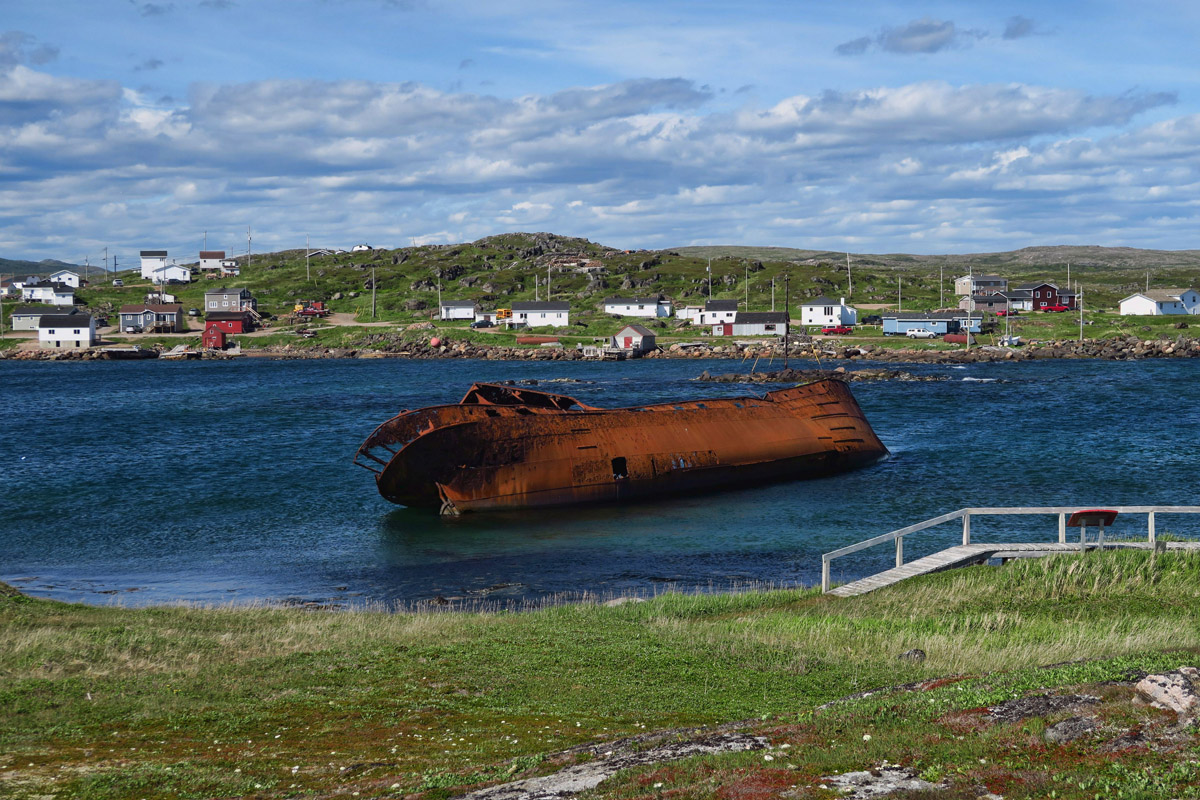 This is a recent shipwreck comparatively speaking. This ship sunk in the early 1960’s, and is not part of the National Historic Site.

Red Bay also has another claim to fame in Labrador.  It’s literally “where the pavement ends.”  What a draw for a road warrior.  Of course I have to go further…the lure never ends.  Whether it be gravel road, a narrow footpath, or bushwhacking a trail, there’s always “just a little bit further” calling, pulling at my deep seated genes of wanderlust and desire to explore.

If you want to go any further than Red Bay, it must be by gravel road, part of the Trans-Labrador Highway that runs through places with names like “Happy Valley- Goose Bay” that sound so alluring. The TLH, or Trans-Labrador Highway runs from Red Bay all the way to Quebec.  It’s the primary roadway through northern Labrador, but due to the harsh winters and sparse population, it’s yet to be paved. Services are few and far between.  In fact, if you are driving the entire road, they will issue you a loner satellite phone to be dropped off at the opposite end of the highway. 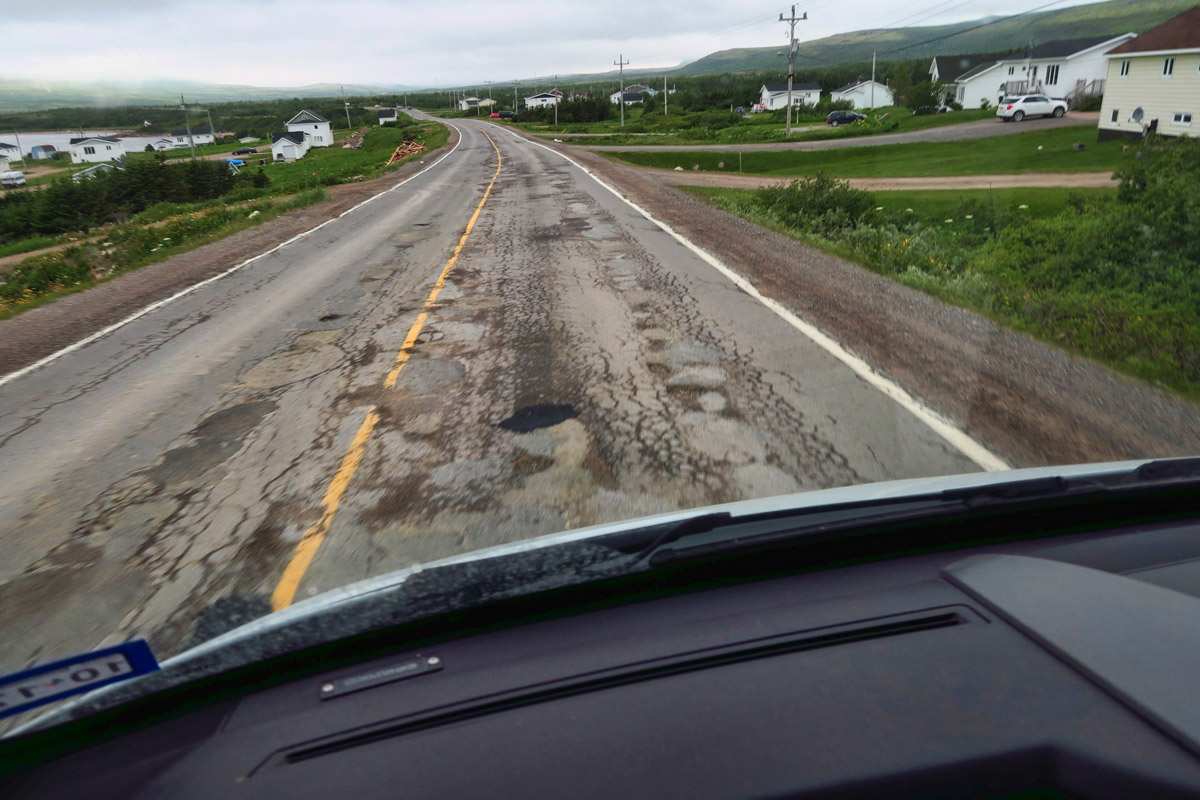 Could a gravel road be any worse than THIS? 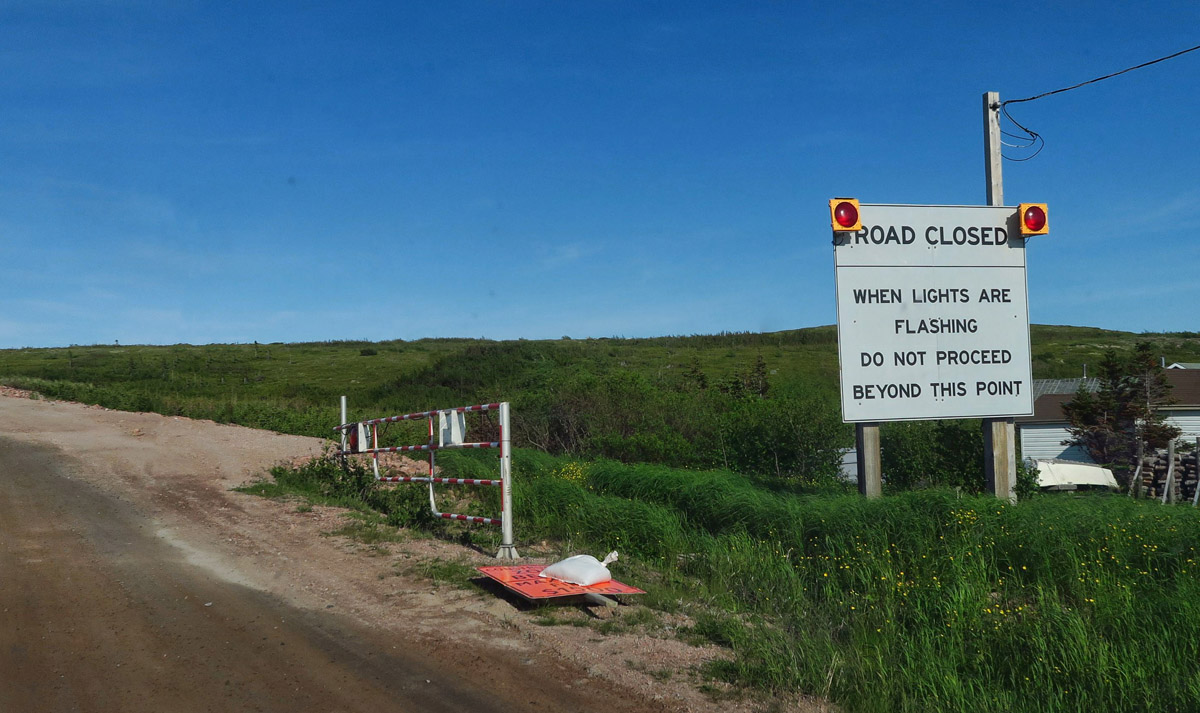 Where the pavement ends and the gravel begins. 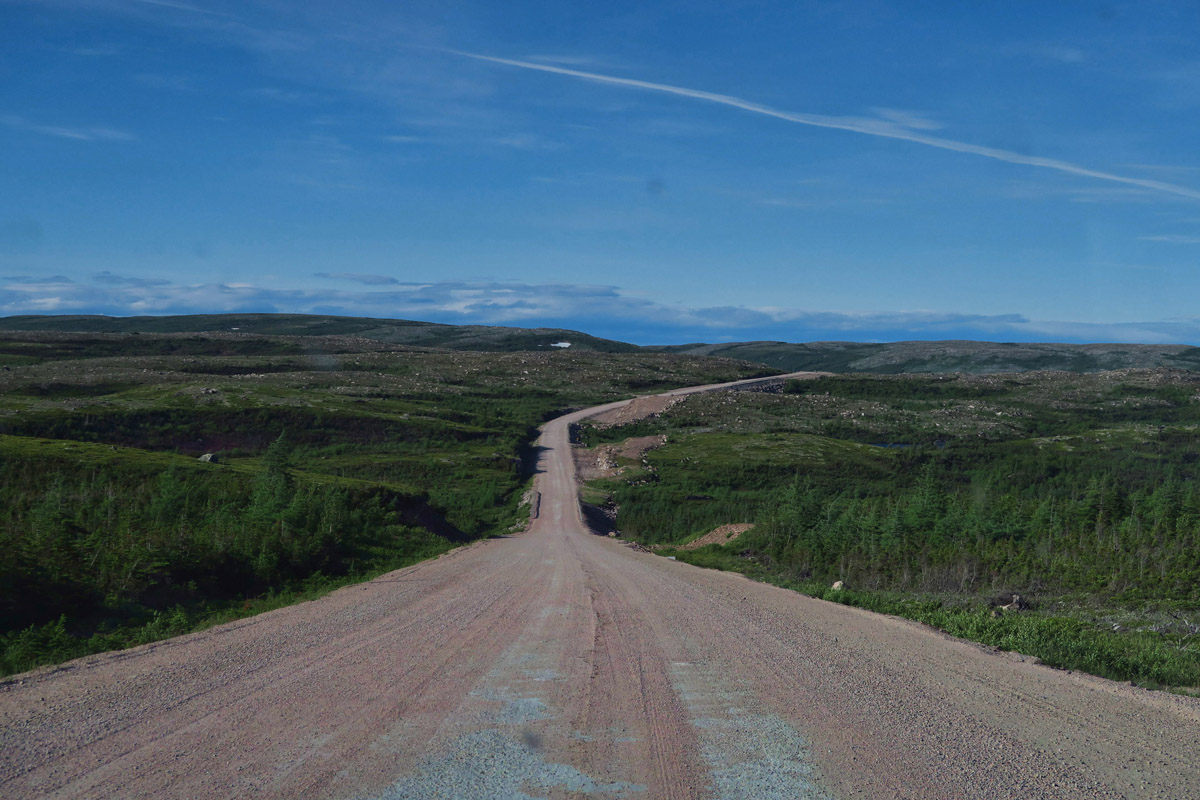 It’s actually pretty smooth overall, save for a few stretches of washboard. 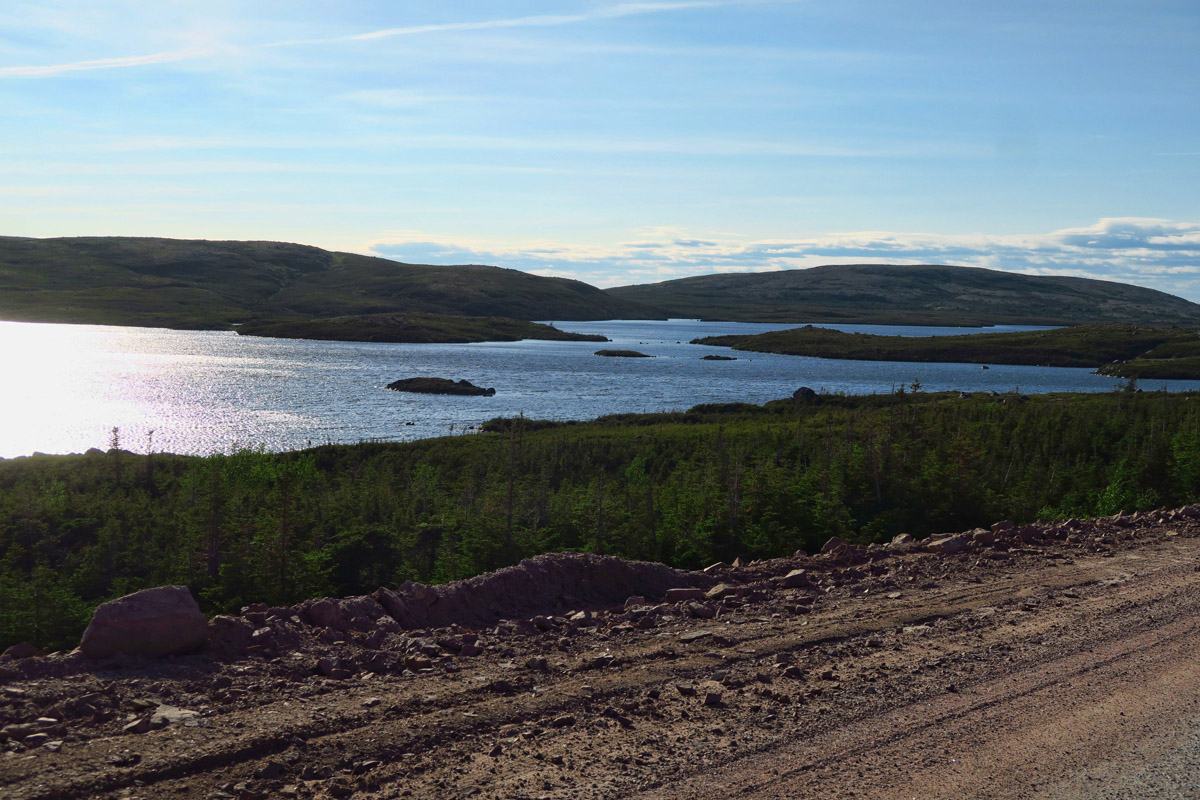 Miles and miles of untouched wilderness. 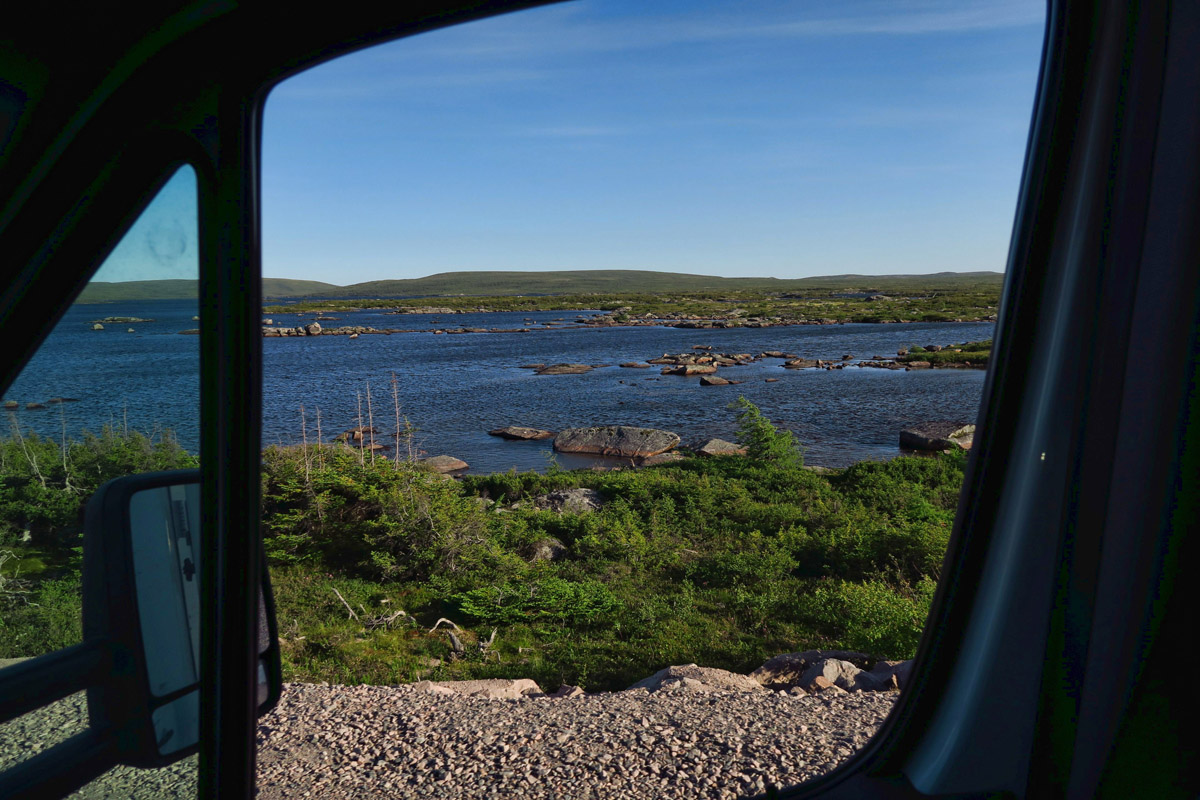 One might think 2 hours on a gravel road would be tedious…yes, but also scenic. 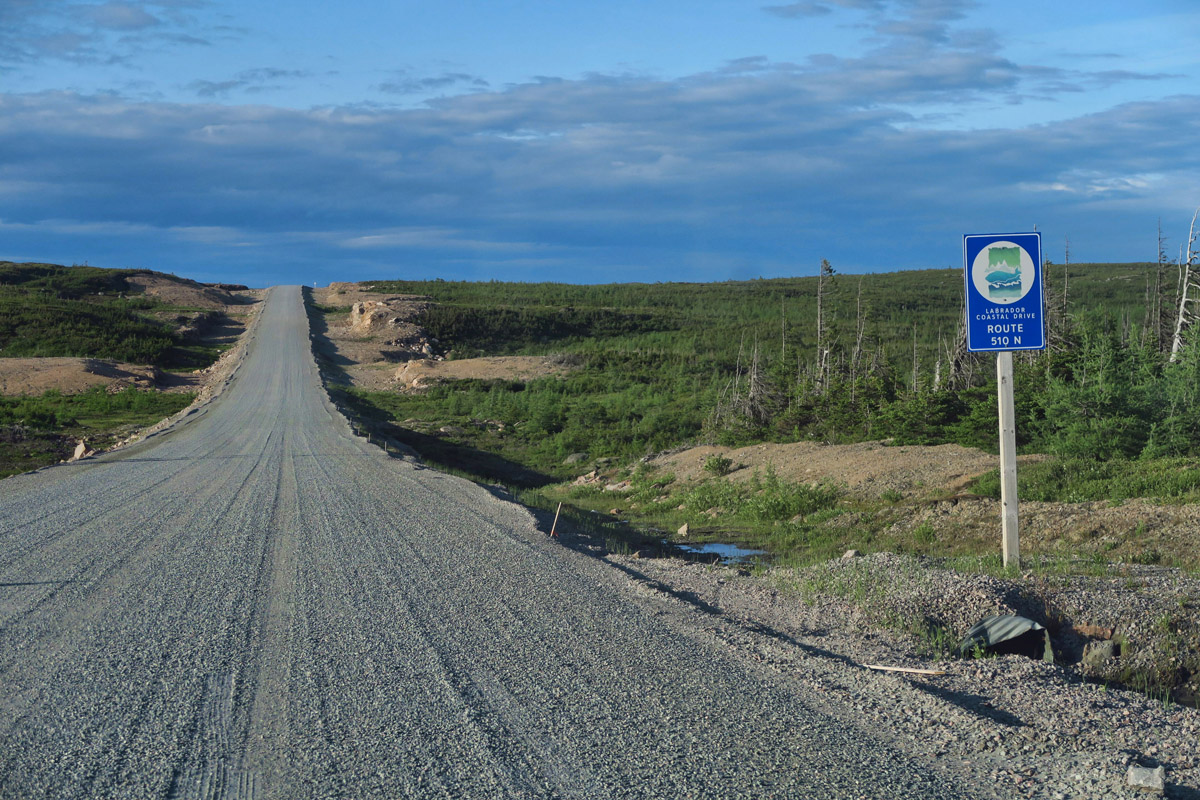 Not a lot of traffic out here…

I want to visit an island just off the coast of Mary’s Harbor, which is 55 miles up this gravel road.  First of all, let me just say that I have “babied” this RV for the past five years like it was part of Leno’s classic car collection.   I won’t let anyone else behind the wheel, and I select my boondocking roads very cautiously.  In fact, I cringe at the 4 mile single-lane stretch of crumbling asphalt required to navigate to my Mom’s home down on the farm.   So the concept of driving 55 miles on a gravel road with dust that billows like a bag of Gold Medal flour is inconceivable.   I still don’t know what made me decide to do it, other than the challenge of my inner voice saying “you don’t have the nerve, Suzanne.”

The 55 miles is rough on the first and last 15 miles, but smooth on the 25 in the middle. I rarely get above 25 mph on the front and back sections, but wind it up to cruising speed at 40 mph in between. It takes me 2.5 hours to go 55 miles. 😉 The road is wide and scenic. The only scary parts are the huge transport trucks that come barreling in the opposite direction, billowing dust behind them like an 18-wheeled desert haboob. 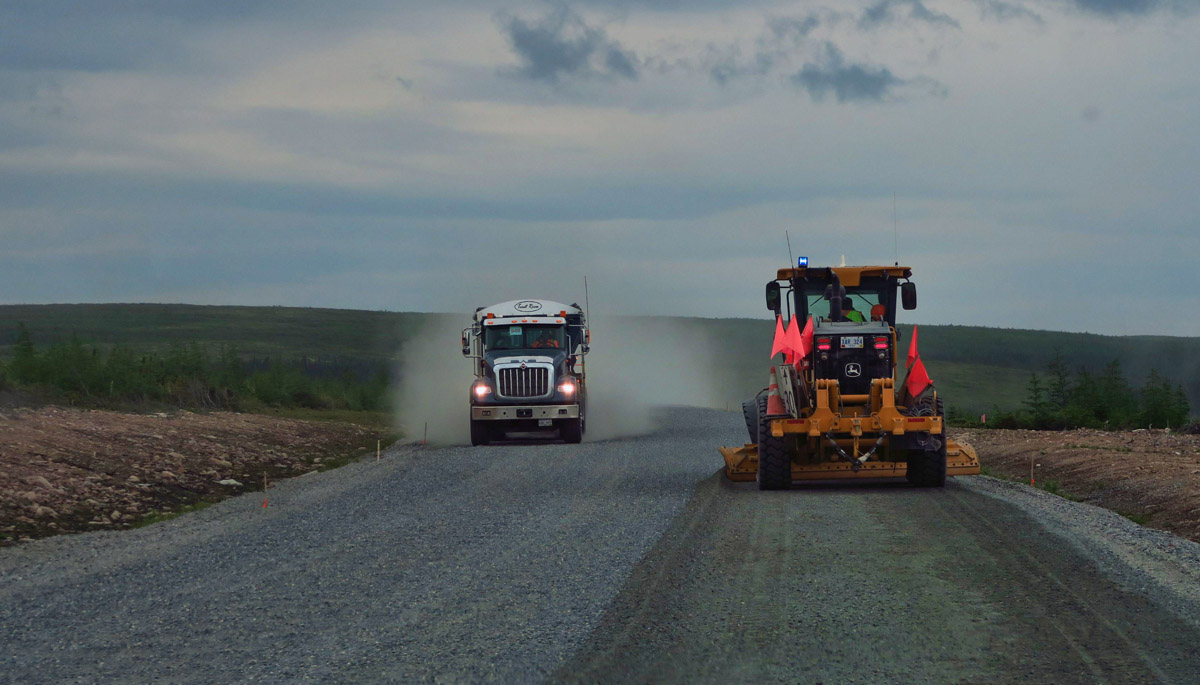 This is a dreadfully intimidating sight. When I meet these transport trucks, I pull over as far to the right as I can, and almost come to a full stop.

Once I arrive at Mary’s Harbor, I quickly notice the entire town is built on a slope leading down to the waterfront.  I’m going offshore overnight, and I need a level place to park to keep my fridge functioning.  But there doesn’t seem to be a place in town that doesn’t slope toward the sea. Driving through the small town, I notice the Riverside Lodge has a wonderfully level gravel lot on the side of their hotel, so I decide I will ask.  The woman behind the desk says enthusiastically, “Sure! Park ‘er right there, me love!”

By now, it’s getting on towards dark, and I am eager to get stopped for the night. So I ease back into the spot, until I hear a loud popping on the roof.  CRAP!!!  I hadn’t noticed the second floor clothesline running from their upstairs balcony to a reel fastened high up in a tree.  What hotel has a clothesline?   And on the second floor, no less?  Well, it could always be worse…at least it isn’t electrified.   I climb up the ladder to free myself, but the line somehow managed to clear a dozen entrapments backing in, but not so coming out.  I must do a series of “creep forward six inches, climb the ladder and lift the clothes line over” for about four tries until it’s finally free.

Meanwhile, swarms of tiny gnats are buzzing all around my head while I am working, but I don’t pay too much attention beyond just being annoyed.  Until, that is, I reach up to see what is trickling down my neck….BLOOD!   I have been bitten by vampire gnats!   Turns out, I’ve just had my first “black fly experience.”

I’ve heard about black flies for years, but figured they looked like….well….flies.  But not these flesh eating, carbon monoxide-seeking nano-gnats, straight out of a science fiction movie.  They go straight for the neck and hairline. The next day, I had at least 30 red, swollen, inflamed, itching  whelps on my neck, ears and scalp. 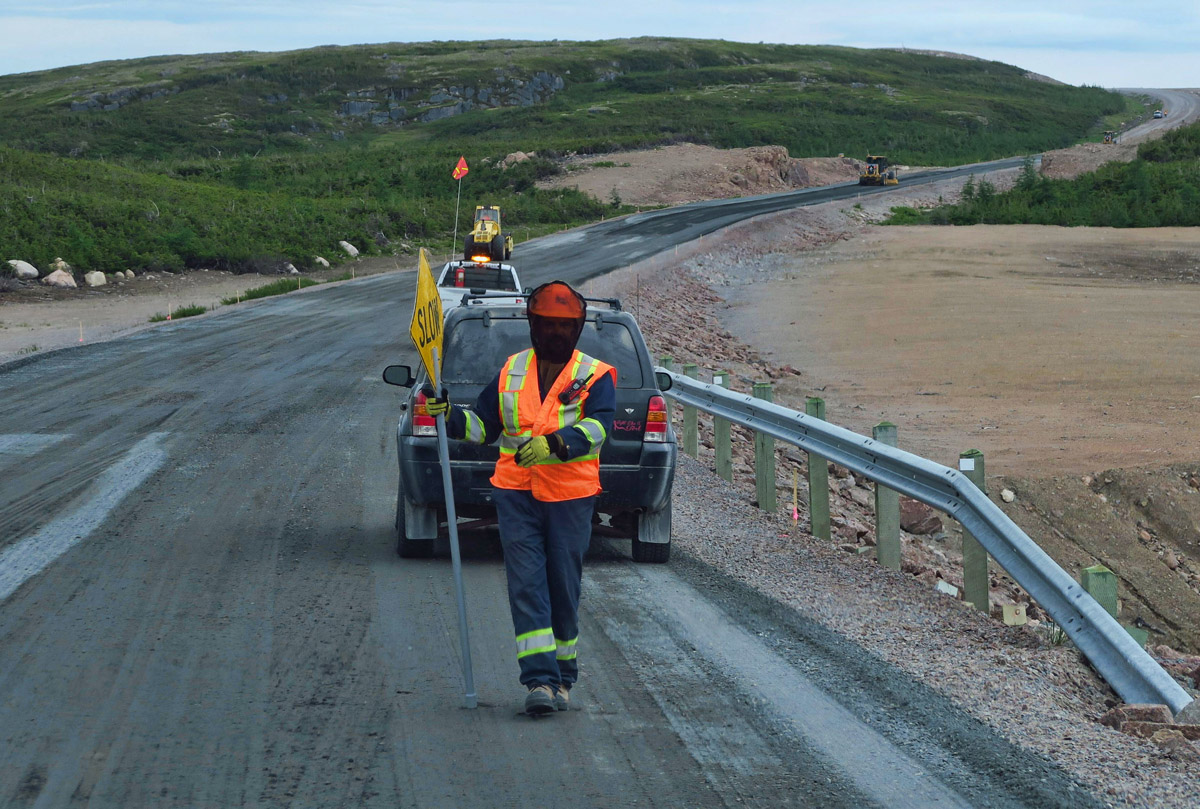 Check out these construction worker’s uniforms. Not an inch of skin exposed for the nasty nano-fly! 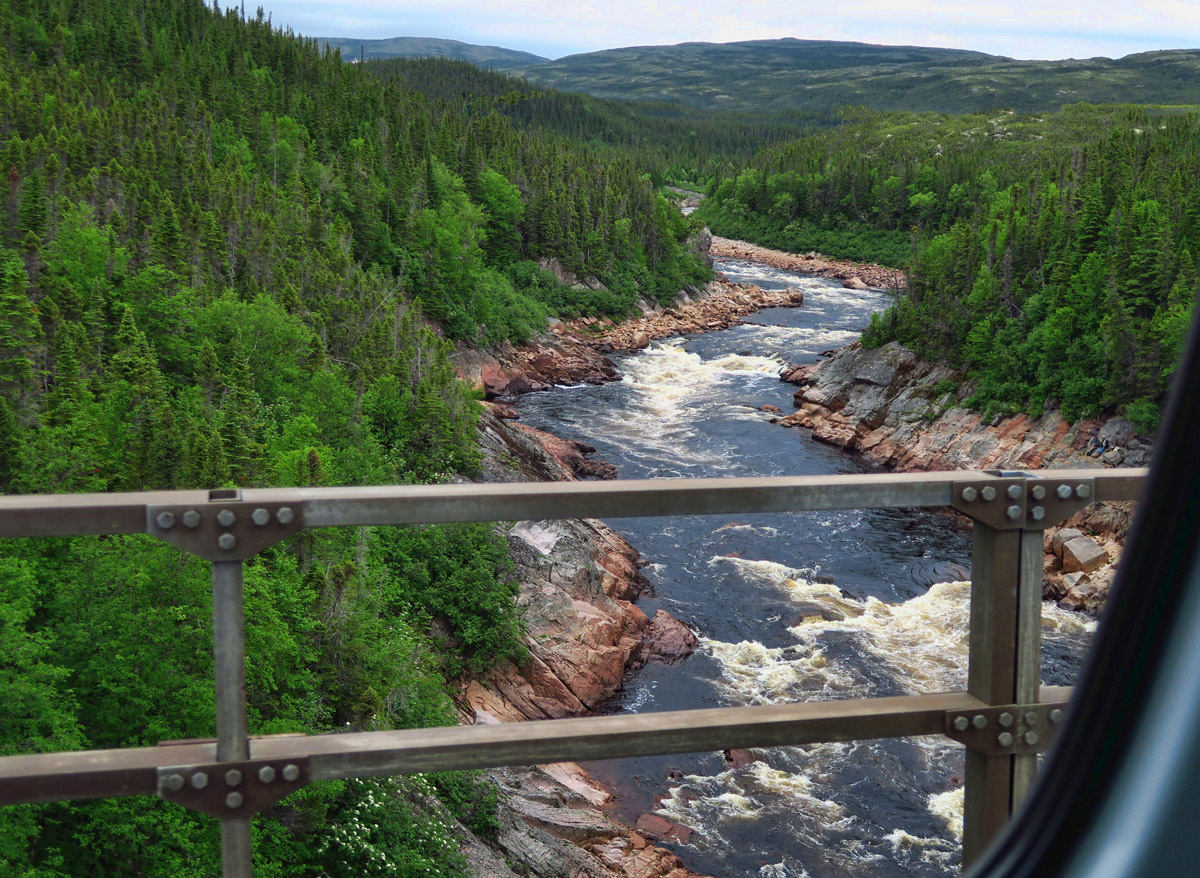 I want to stop and take photos on the way back, but by now, I have learned my lesson! I can see them swarming out the window!

Next Up…Is a National Historic Site worth 55 miles of dusty gravel road and 30 vampire bites to the neck?  Stay tuned…