A couple of friends and followers asked if I was going to explore further in Labrador…either further north up the gravel road toward Cartwright, or back down to the southern shores of Quebec.   It’s so tempting! Both seem like such beautiful places with so much to see!   I would love to go further in either direction. But I haven’t even scratched the surface of Newfoundland yet, and still need to leave time to explore more of Nova Scotia and Prince Edward Island, since I blew through on my way north.

Wise were the travelers who came to the maritimes earlier in the year, as one could certainly spend months up here without running out of places to explore.  Already, I am trying to figure out how I will fit it all in. 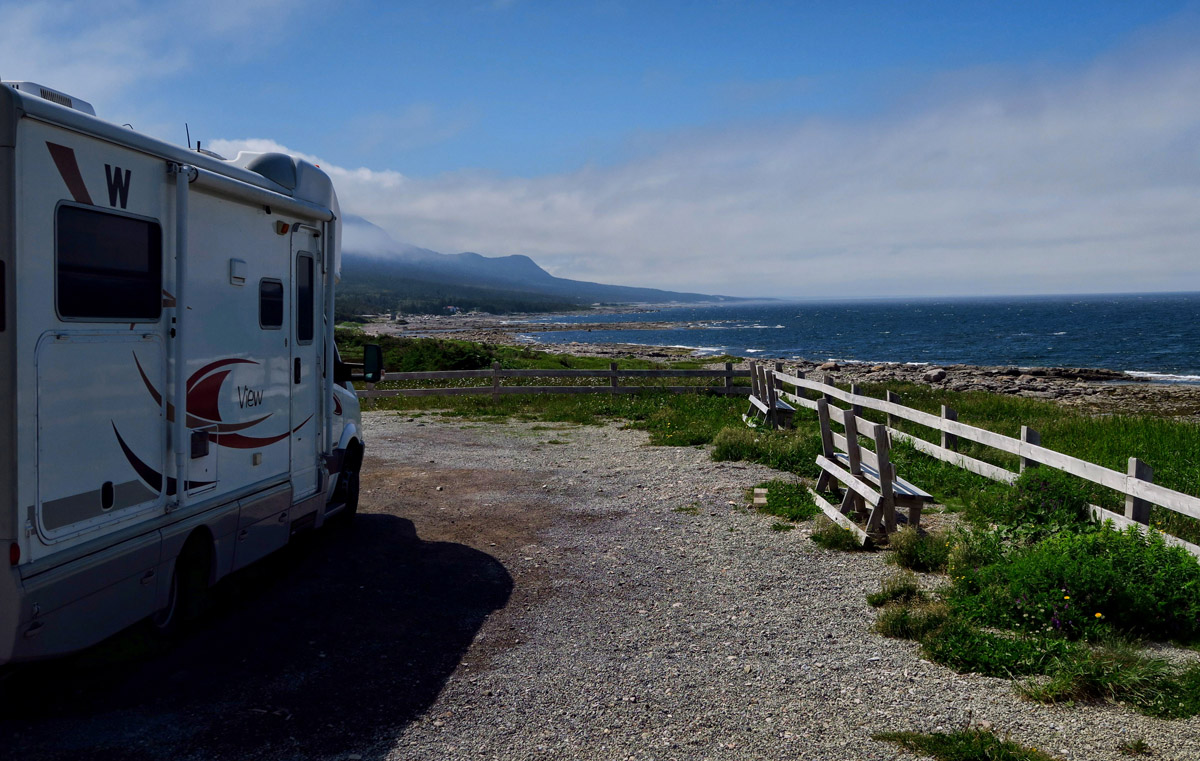 Nice big pull-offs for scenic viewpoints have no signage to indicate overnight parking is not allowed. 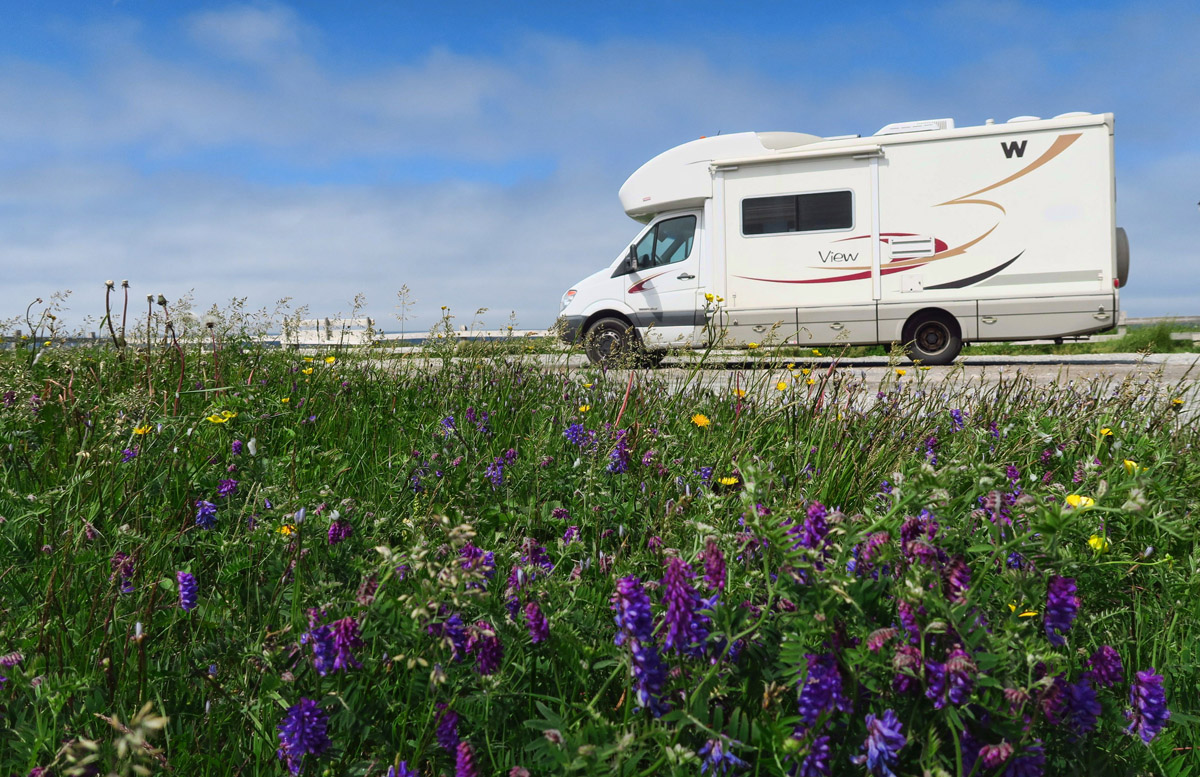 It’s a quiet stop, because very few drive at night due to moose on the loose.

But it’s a short season up this far north, and I have much to see yet on the island of Newfoundland. So I leave Battle Harbour and drive back to the ferry bound for St Barbe, a long day of driving due to the rough roads.

I am on the 6:00pm ferry which arrives close to 8pm.  The sun doesn’t set until 9:30pm, but fog is rolling in fast.  I had hoped to make it to Port aux Choix by nightfall, but by the time I reach Newfoundland, sundown is accelerated by the pea soup fog.  I dislike driving in reduced visibility, as I am not too keen on running in to “Bullwinkle.”    I see a lovely pull-out viewpoint with no restrictive signs, so I stop for the night. 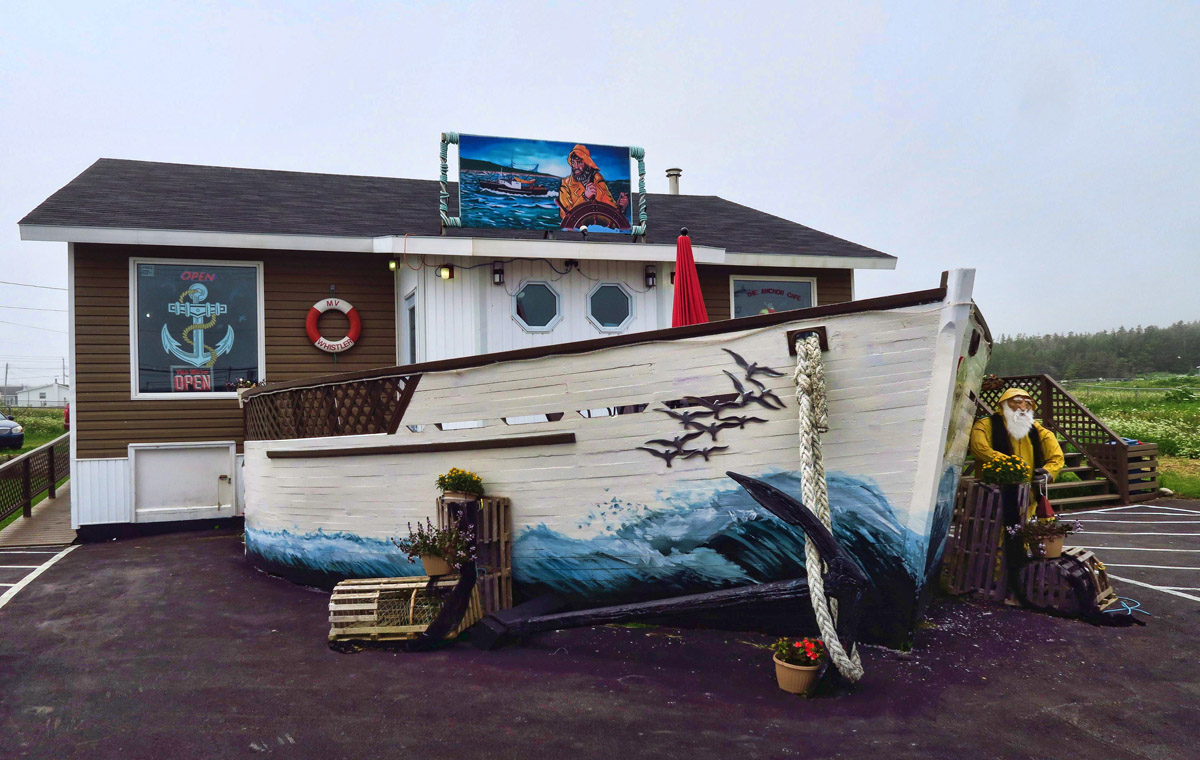 The famous Anchor Cafe in Port aux Choix looks like the bow of a ship. Ed tells me they are famous for their “Warm Sticky Pudding.” Of course, I wouldn’t know. 😉 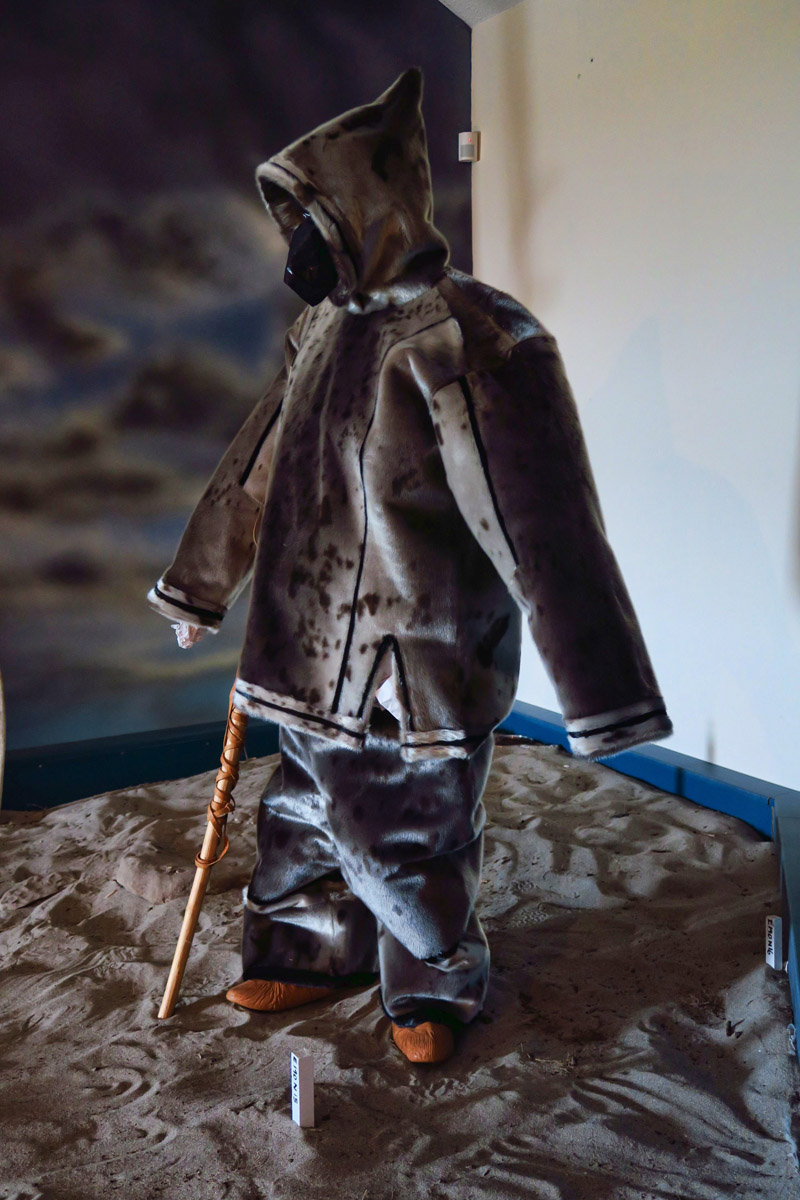 This bizarre stick figure wearing a seal skin suit is part of the exhibit at Port aux Choix. Someone donate them a mannequin, please. I say “Go for the lighthouse, skip the exhibits.” 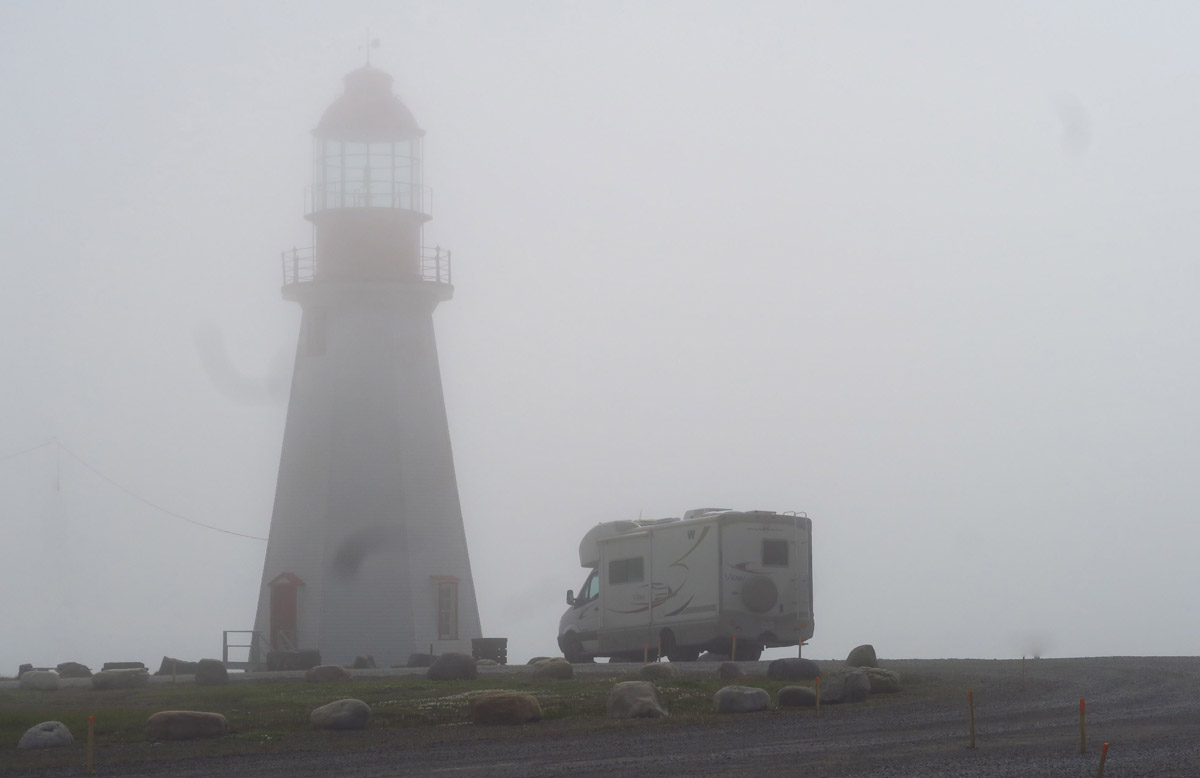 Those who liked the fog at the Rose Blanche Lighthouse should enjoy this view.

I’m headed back to the Gros Morne National Park to spend some time hiking, since I passed through so quickly on my way north.  But first, I take a detour and end up spending the entire day in Port aux Choix.  It’s another National Historic Site where “Maritime Archaic” (the equivalent of our PC term, “Ancestral Puebloan”) people lived 3,000 years ago. But this historic site seems to be a bit short on artifacts or exhibits.  When a Visitor Center’s only exhibit is a diorama of an architectural dig and a modern day scarecrow wearing a newly made seal skin suit, well you be the judge.   However, there’s a lighthouse there!    I hadn’t planned on spending the day, but again, thick fog rolled in.  Something about fog makes me sleepy, so I stay longer here than planned. Like all night.

However, if I hadn’t lingered, I might have otherwise missed the caribou!  As I am pulling in to see the lighthouse, a man walks up to my window and says “Can you believe how close they are???”  I ask, “They who?”  He gives me a look of disgust, then ways “The CARIBOU!  You don’t see the caribou??”    There through the fog, I can now make out a few images…a whole family of caribou, grazing just off the road! 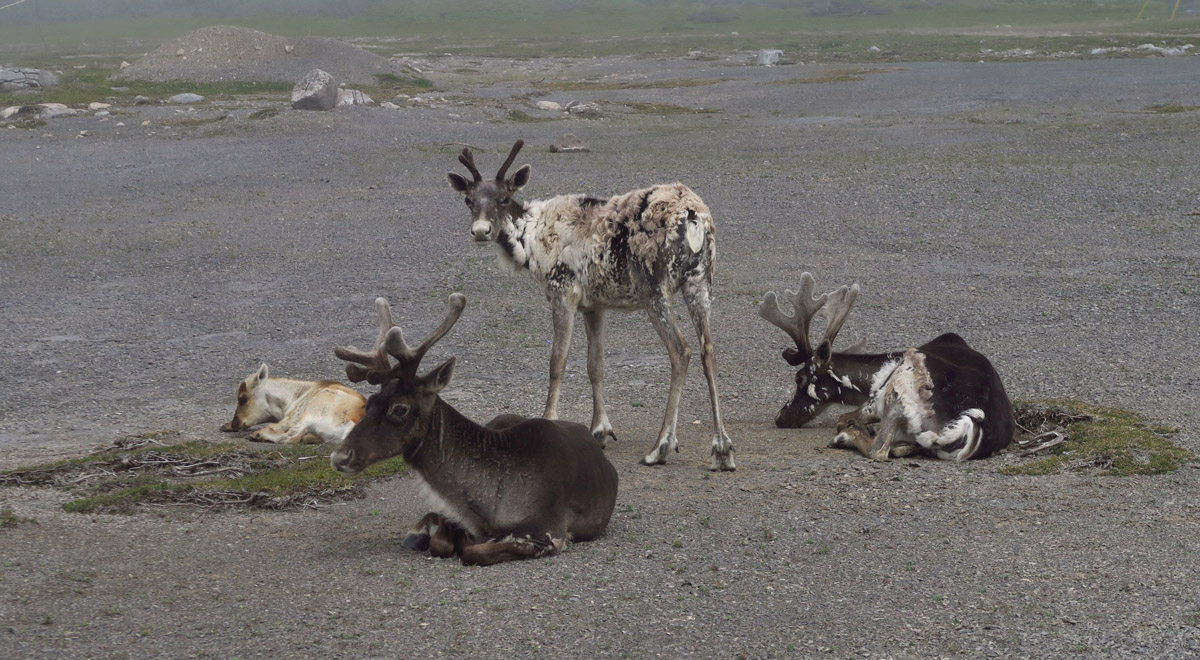 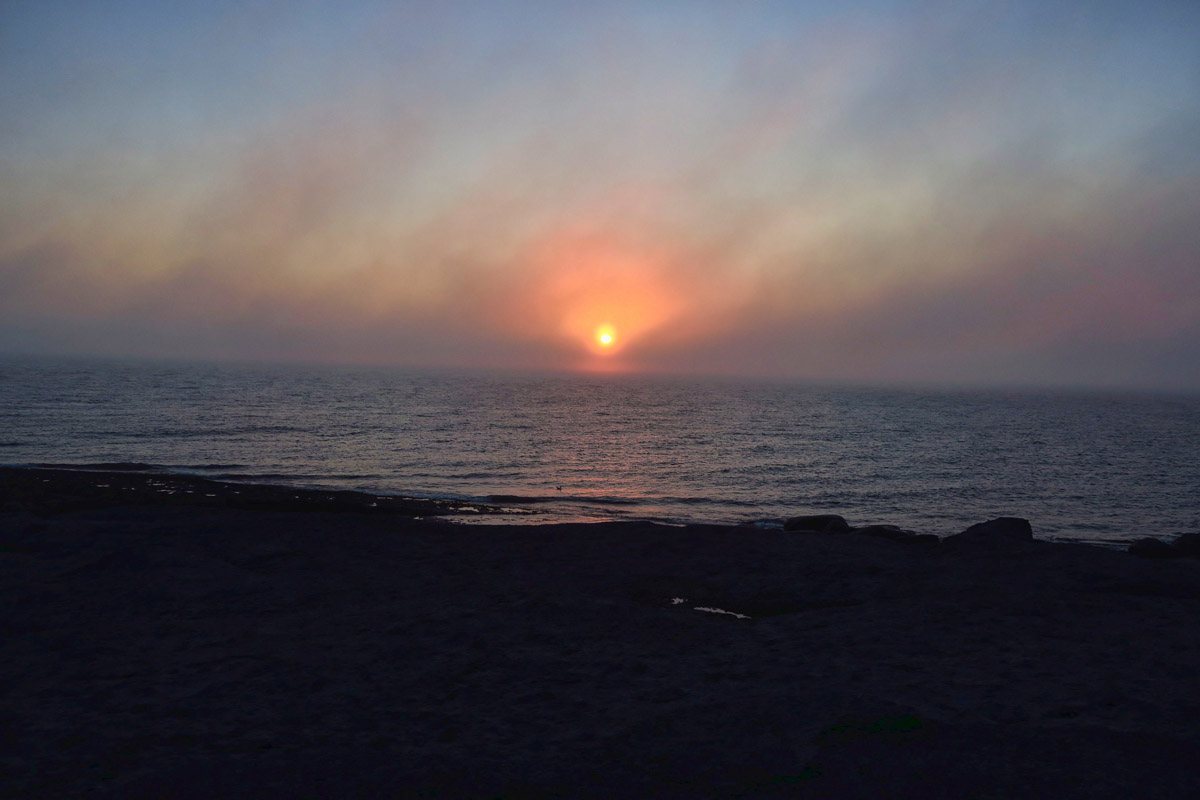 Sunset through the fog. 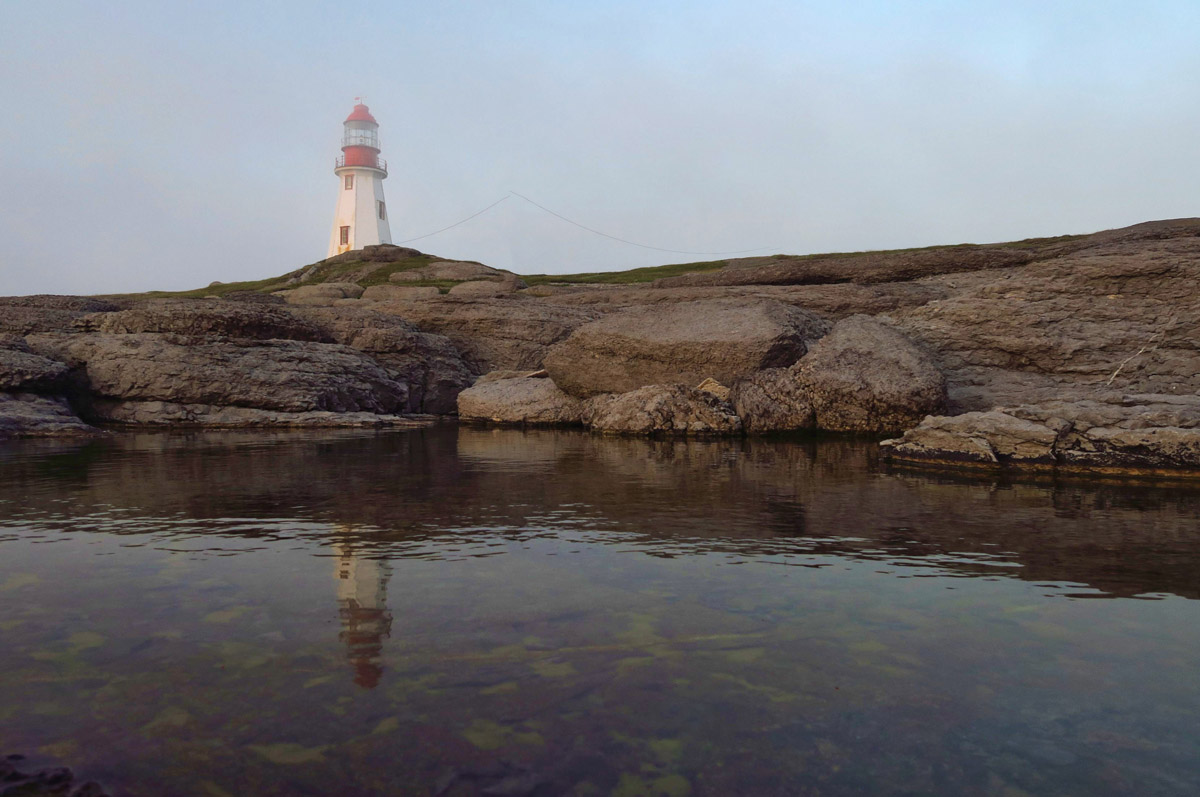 Point Riche Lighthouse, constructed in 1892. It’s a working lighthouse, but no access permitted. 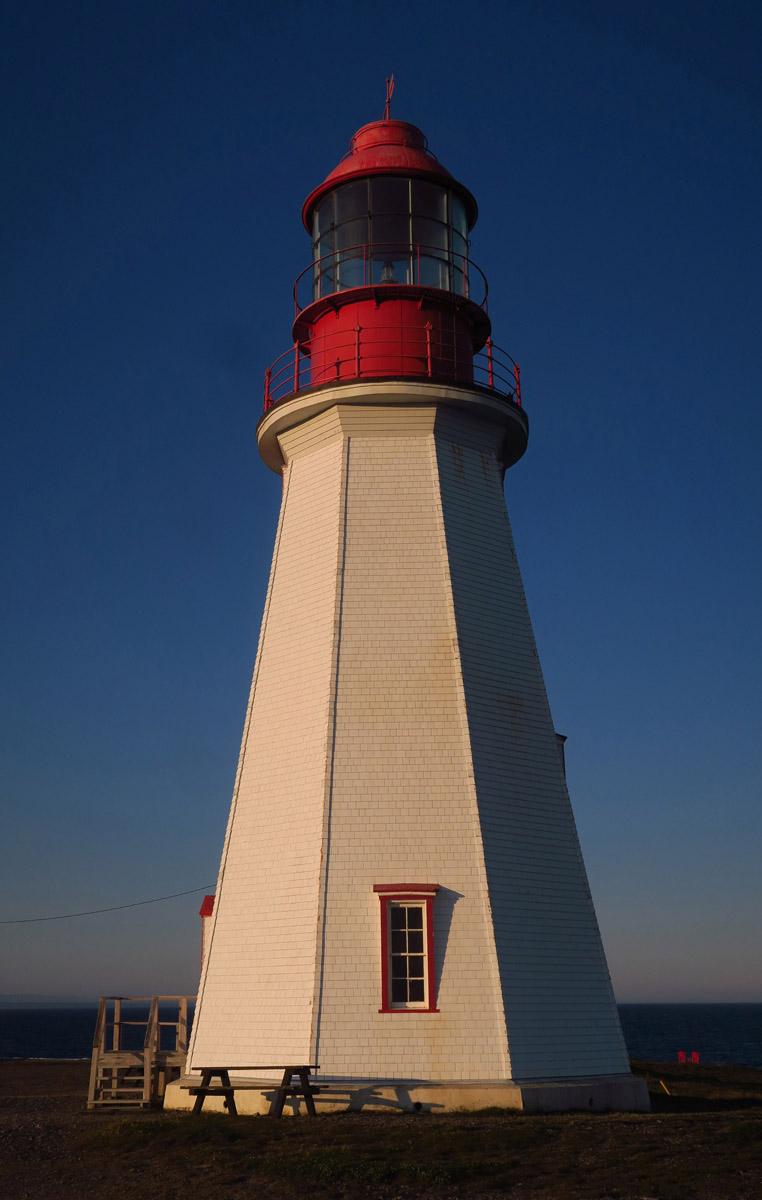 Point Riche is one of the many “pepperpot” lighthouses, named after salt and pepper shakers. This lighthouse style is commonly found in Newfoundland.

On to Gros Morne, where my plan is to hike the Tablelands, an area that looks more like Mars than it does Newfoundland.  The draw here is to walk on the earth’s “mantle,” the second layer between the earth’s super-heated core and its thin outer crust.   The earth’s mantle, a rocky substance approximately 1,800 miles thick, represents about 85% of the total weight and mass of the earth. 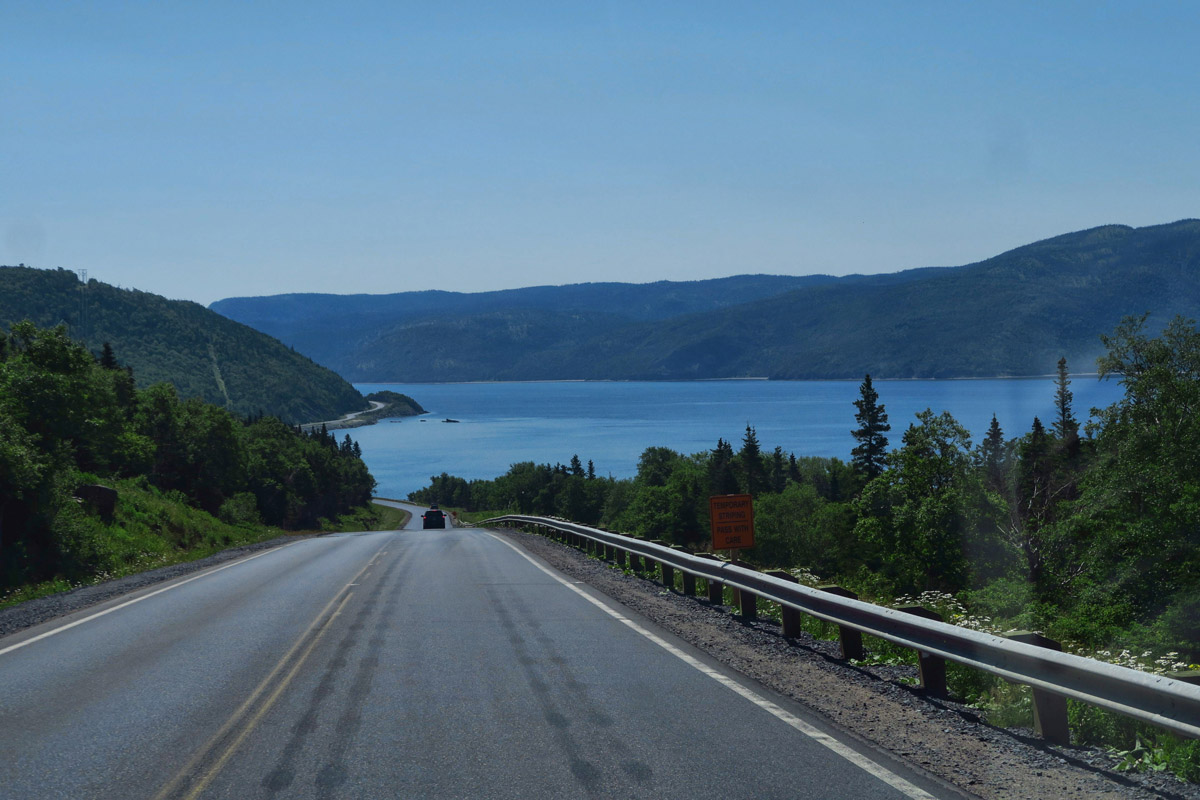 Highway 430, which traverses north as the Viking Trail, is just a gorgeous drive through Gros Morne National Park. 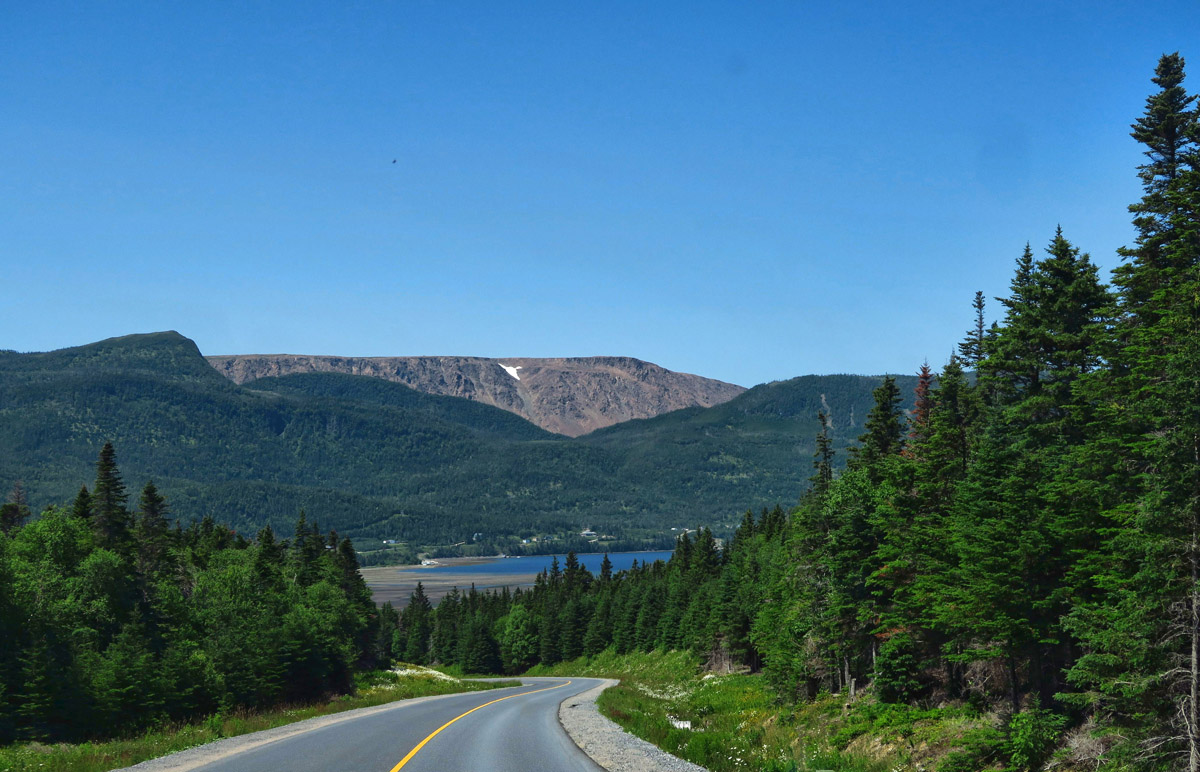 Approaching the little fishing village of Trout River, the Tablelands begin to come into view. 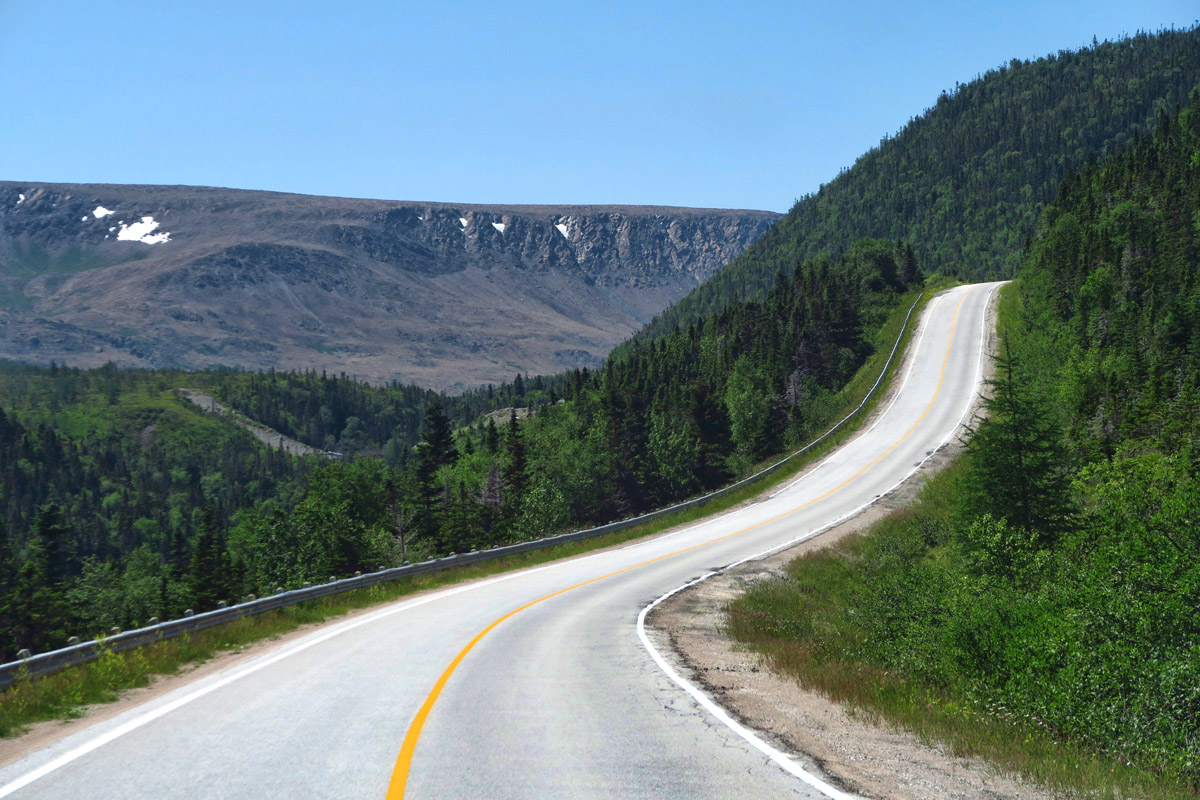 The flat top of the Tablelands makes it easy to see how it got its name. 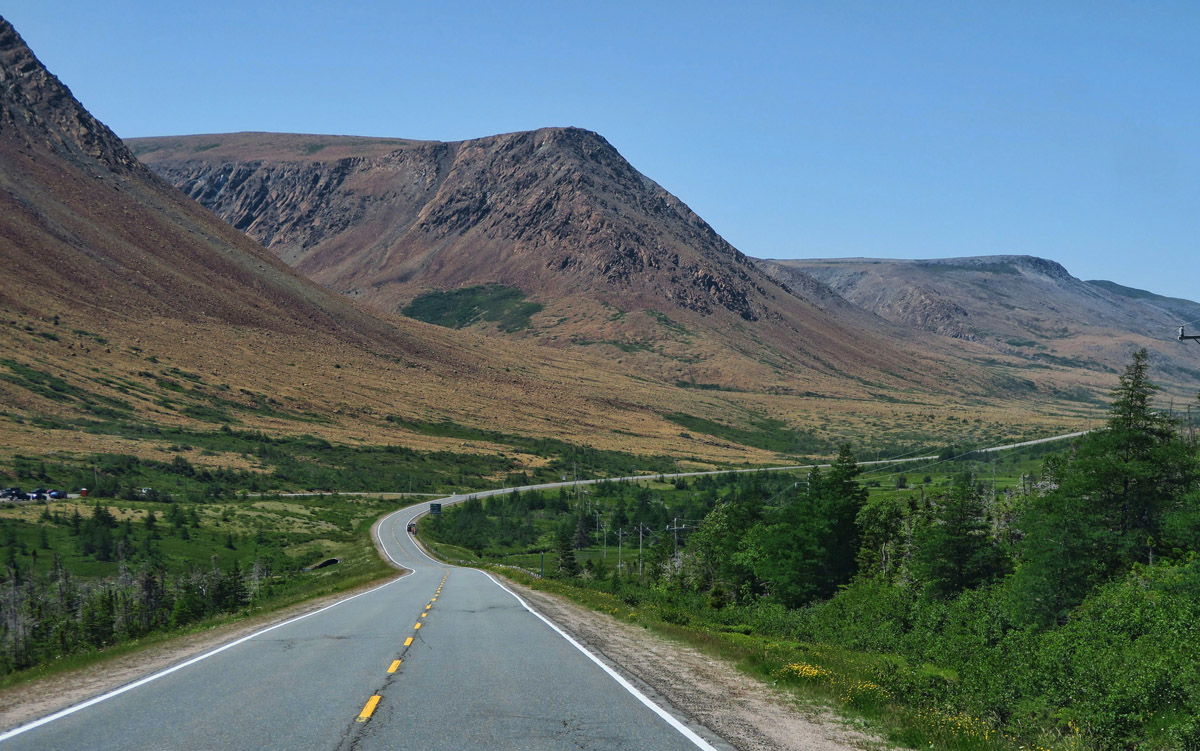 The road to Trout River really demonstrates how the periodite rock is so unique. On the right of the highway is dense green forest, and on the left is the periodite, burnt orange rock, where almost nothing can grow.

There are only half a dozen places in the world where you can see the earth’s mantle.  It’s what earned Gros Morne its UNESCO World Heritage status.  This layer of the earth’s core is also where the shift of tectonic plates occurs, what is believed to have forced this rocky material up from the depths during a plate collision several hundred million years ago. 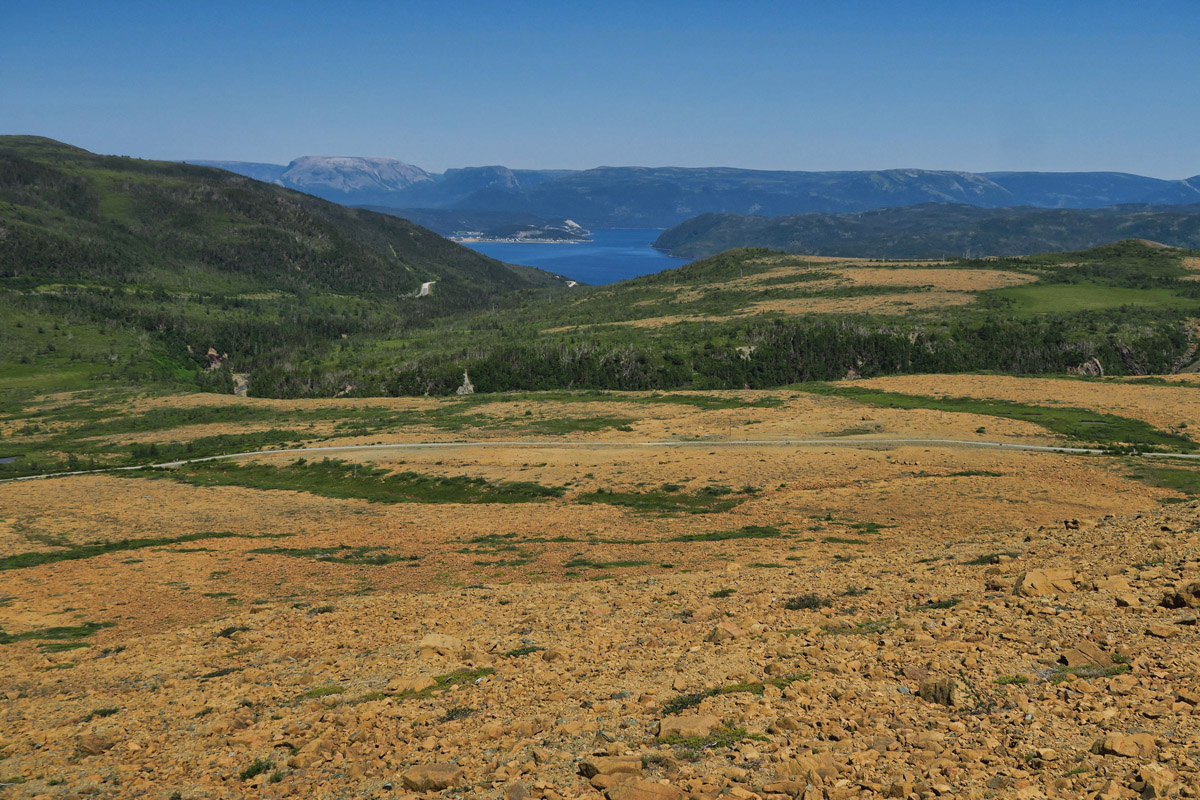 Climbing up on the Earth’s mantle. 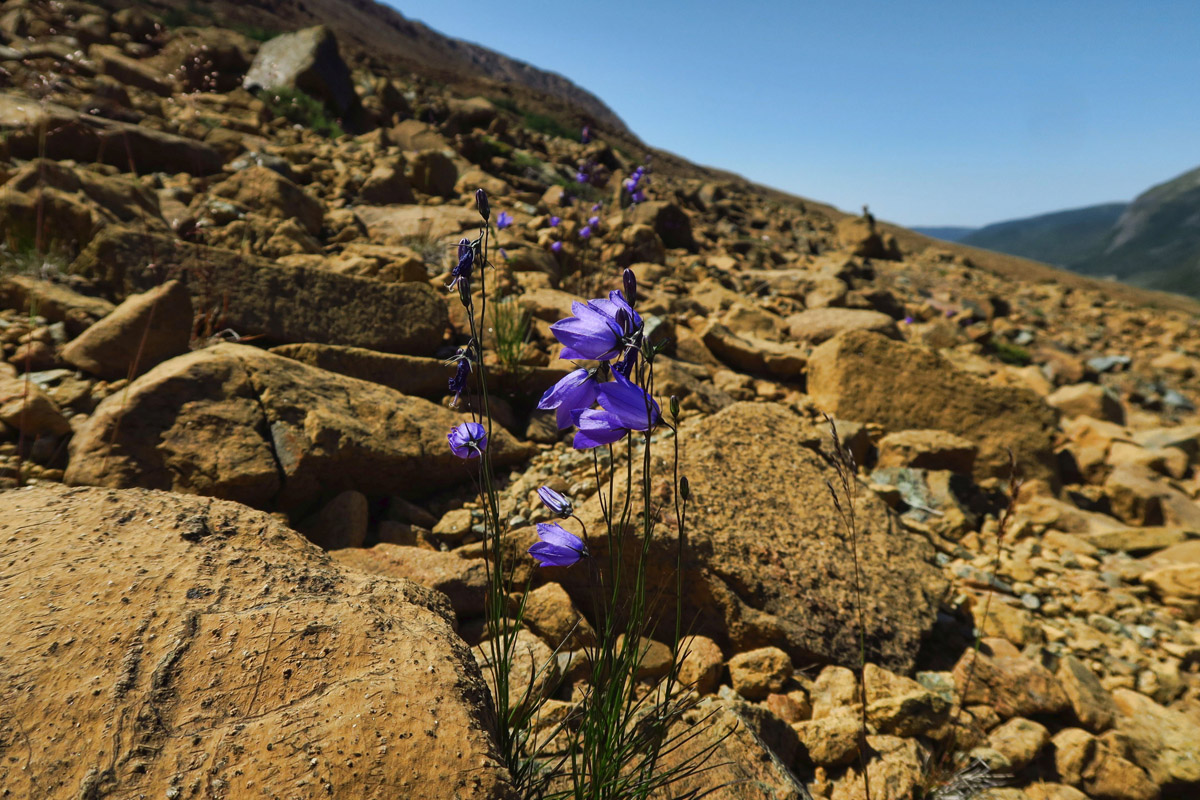 The periodite contains heavy medals and high toxicity so almost nothing can grow here, save for an occasional tiny flower. 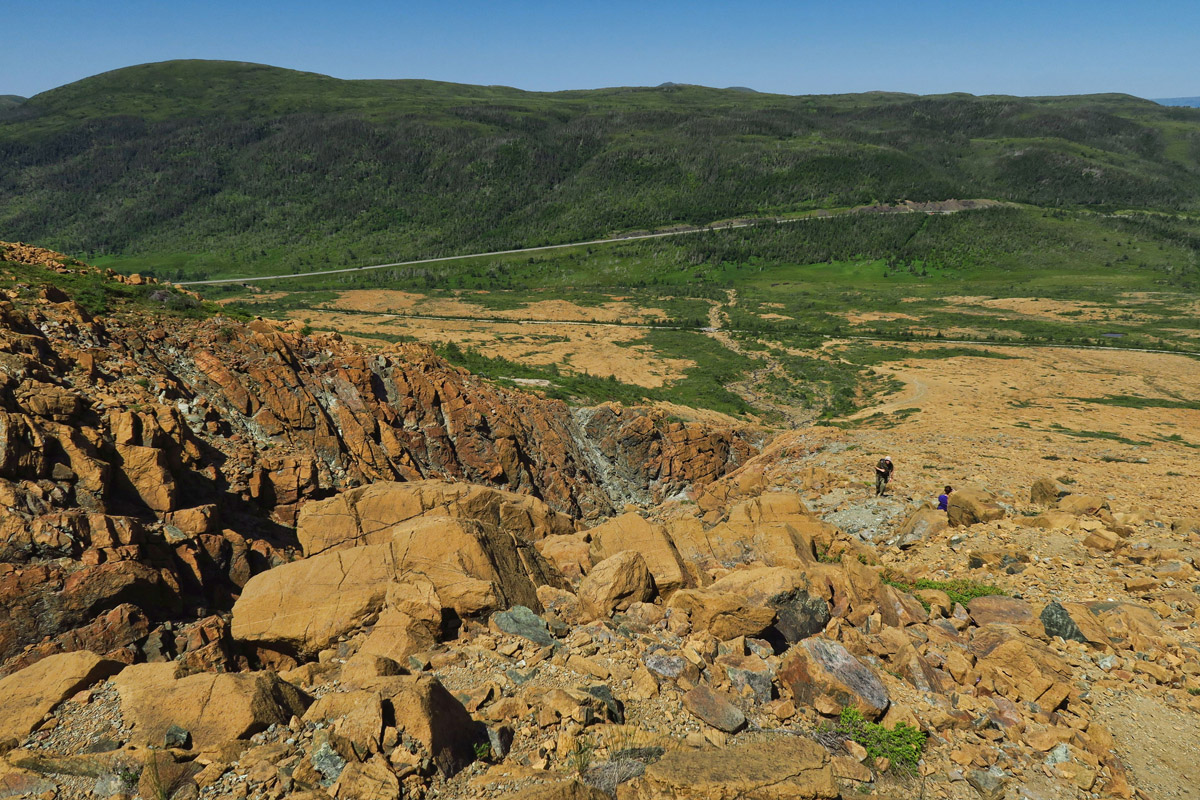 Looking across at the lush forest across the road, you can easily see where the mantle rock ends. 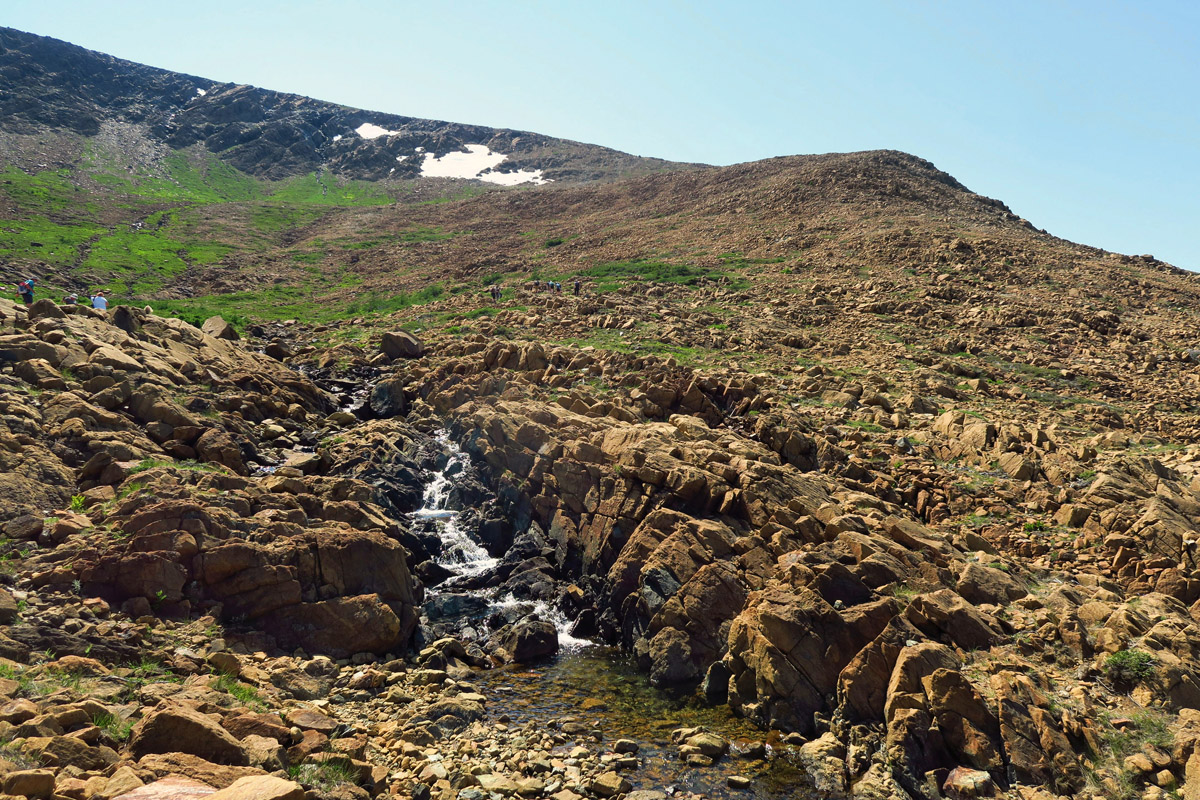 Still a tiny bit of snow in the mountains. 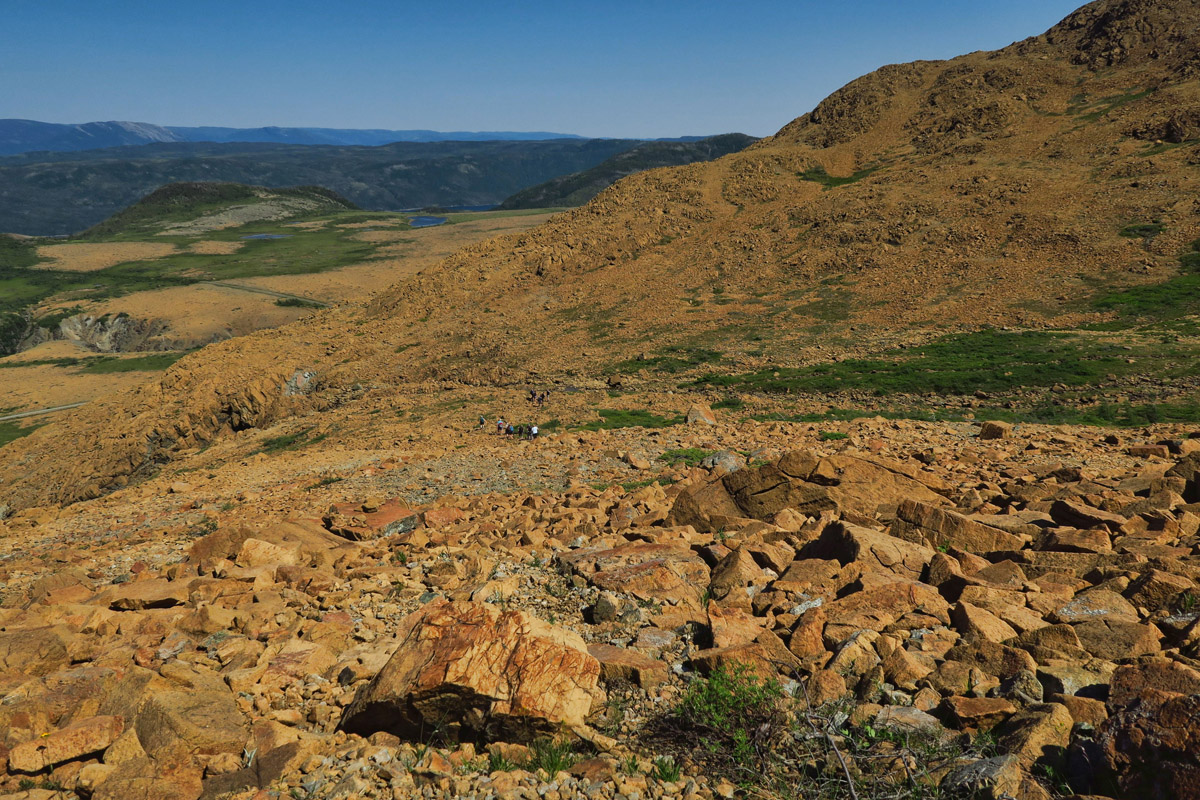 Note white dot in center — group of people below for scale. This is a challenging hike up the rough boulders. 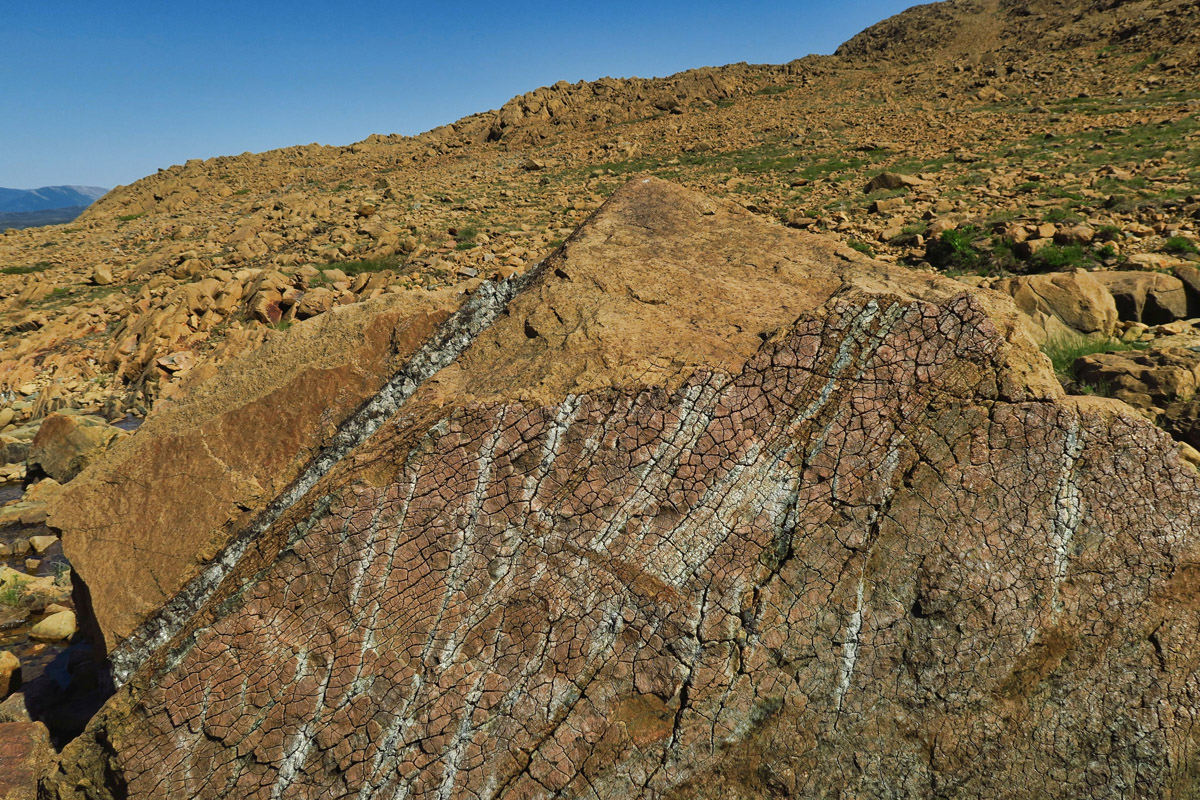 Lots of unique designs in the rocks. 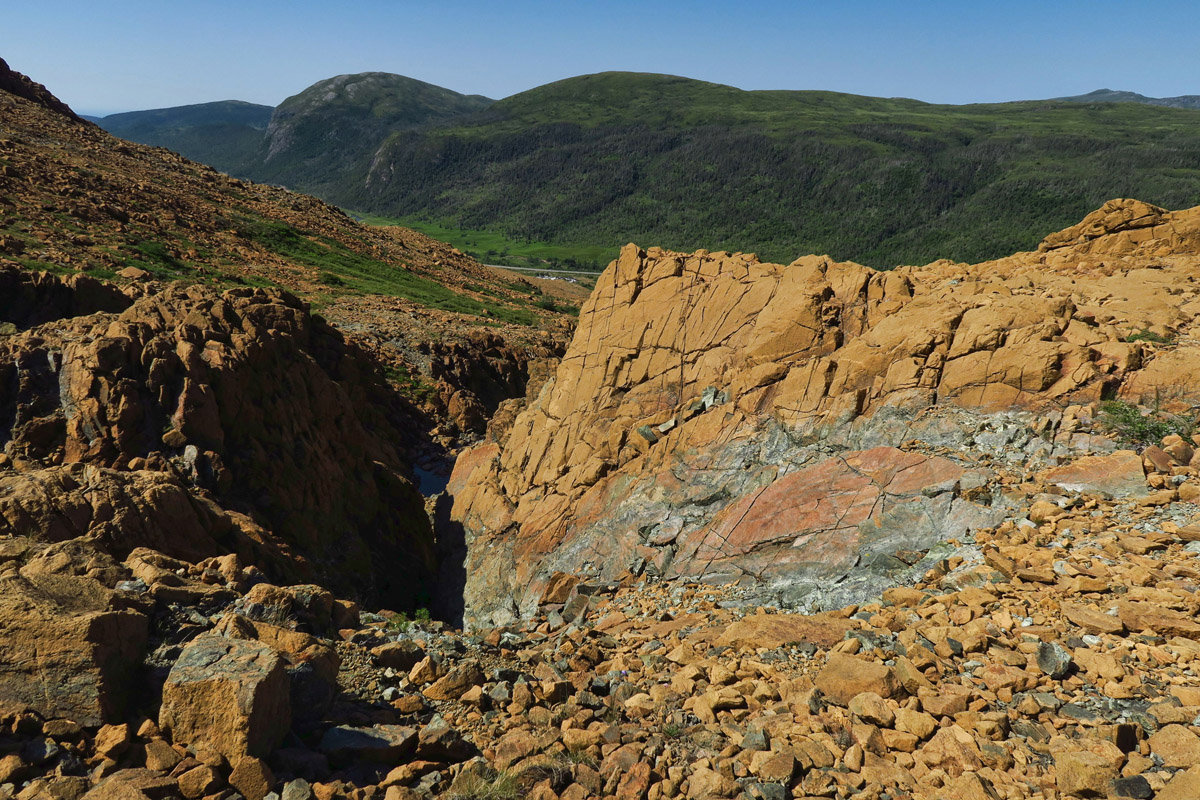 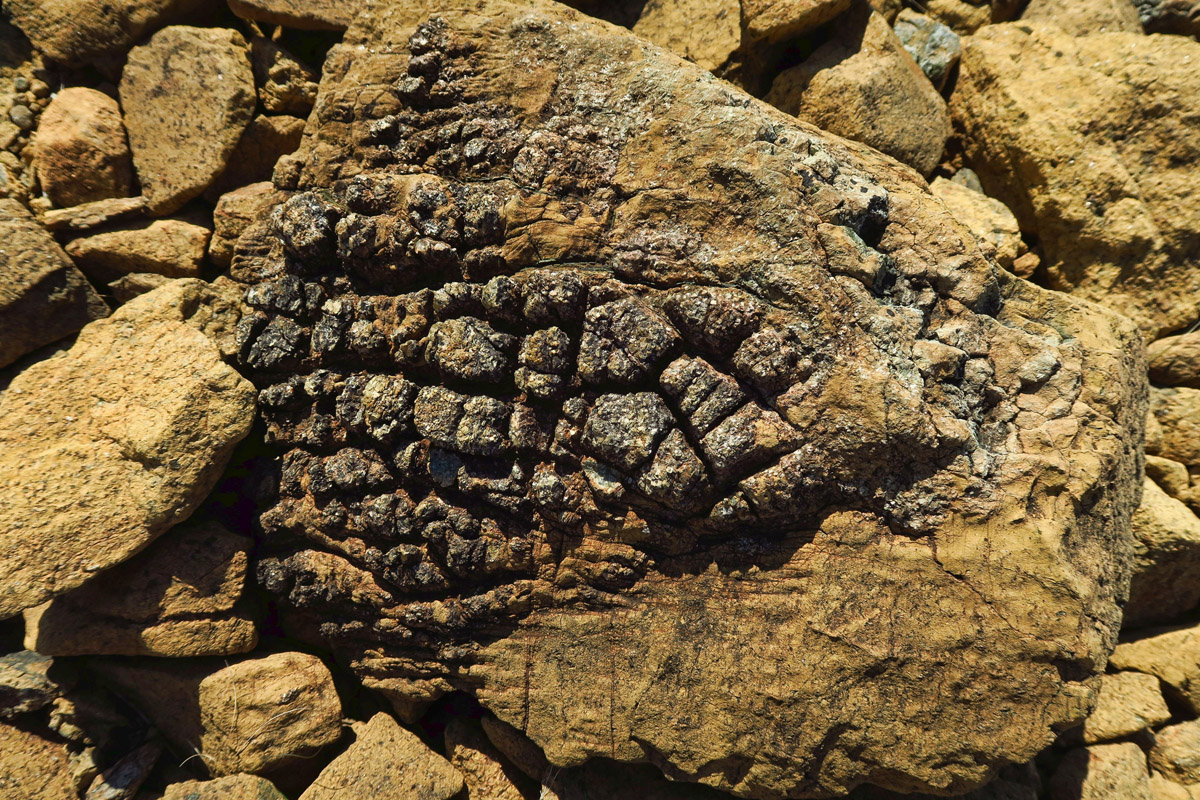 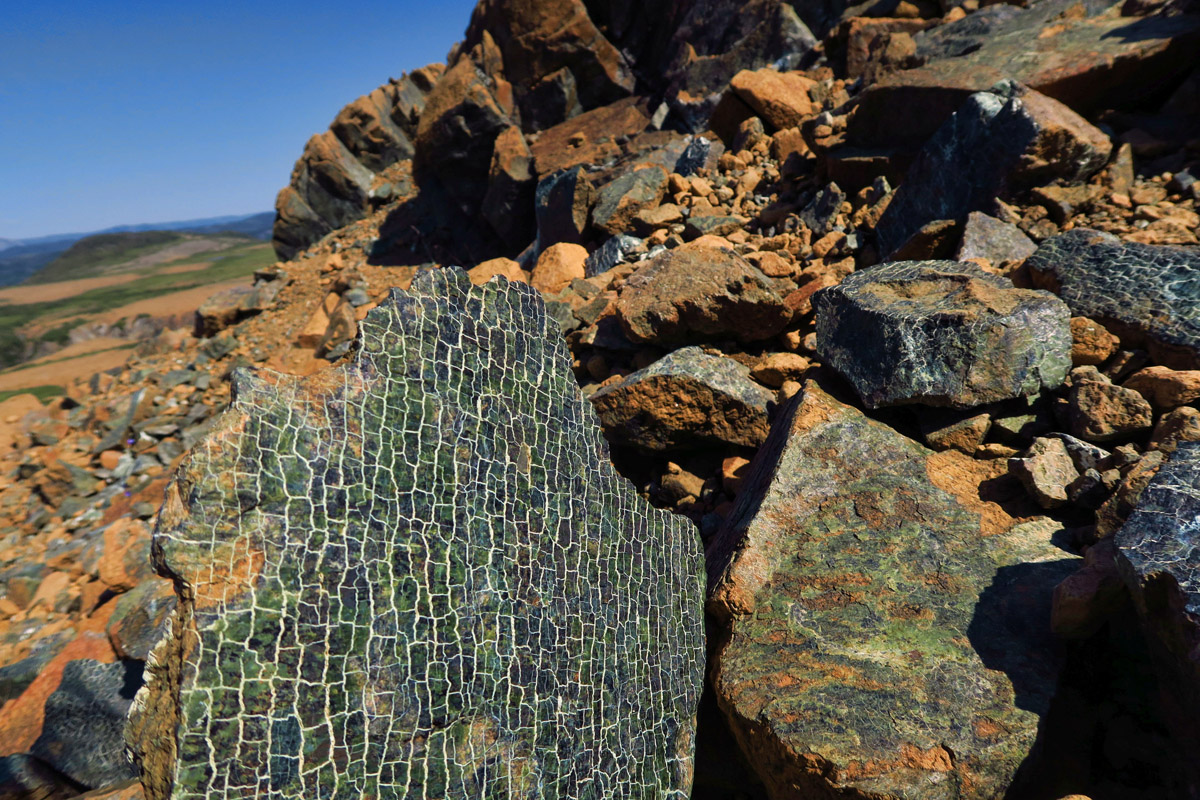 This was my favorite rock. 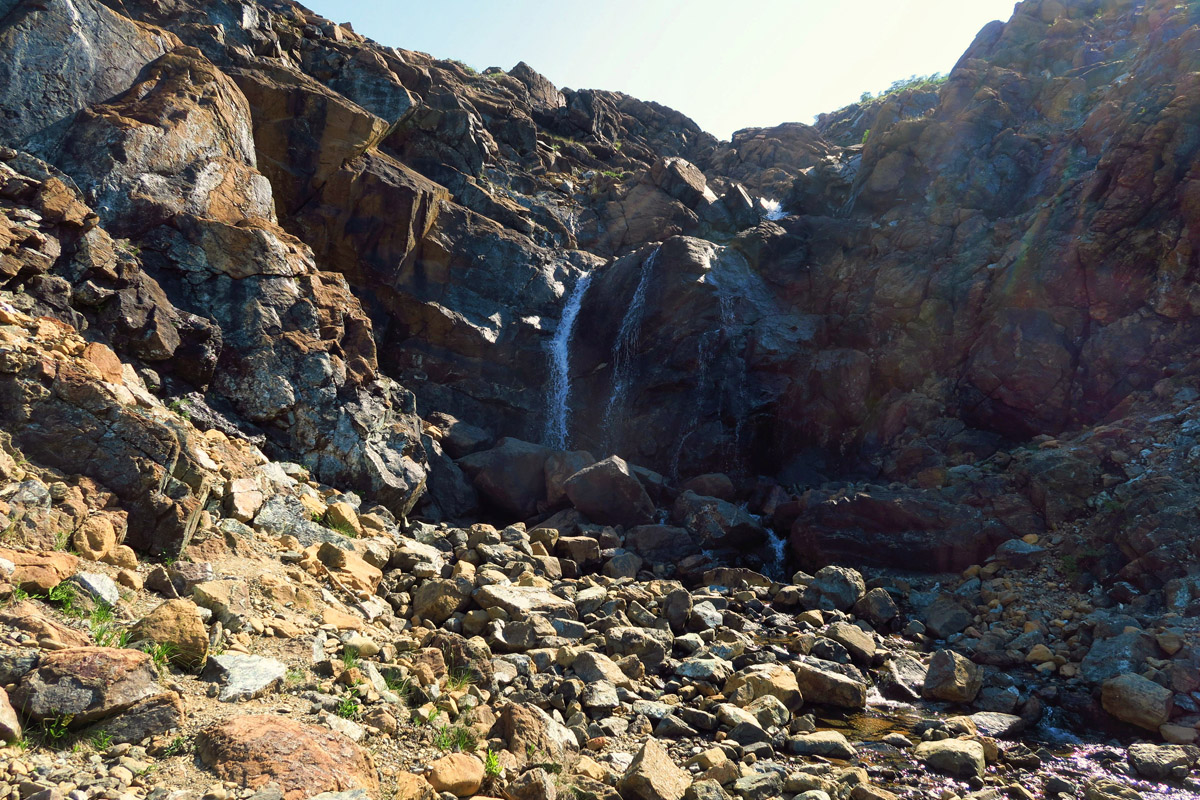 The water flowing here comes from marshland at the top of Tablelands. 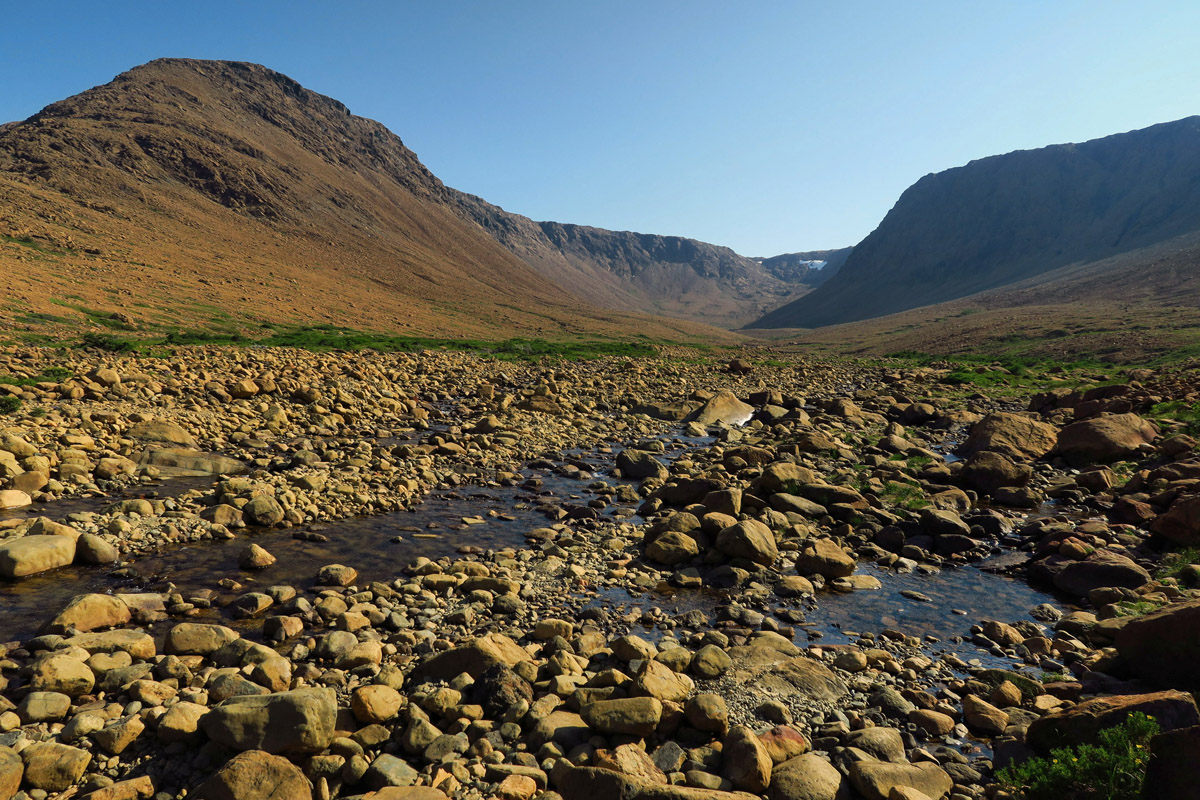 The rusty color of the rocks is due to the ultramafic rock, peridotite, which is high in iron. Beneath the oxidation layer of the rocks, they are actually a dark green. Periodite is low in calcium, high in magnesium, and has toxic amounts of heavy metals, and therefore lacks the nutrients required to sustain almost all plant life. 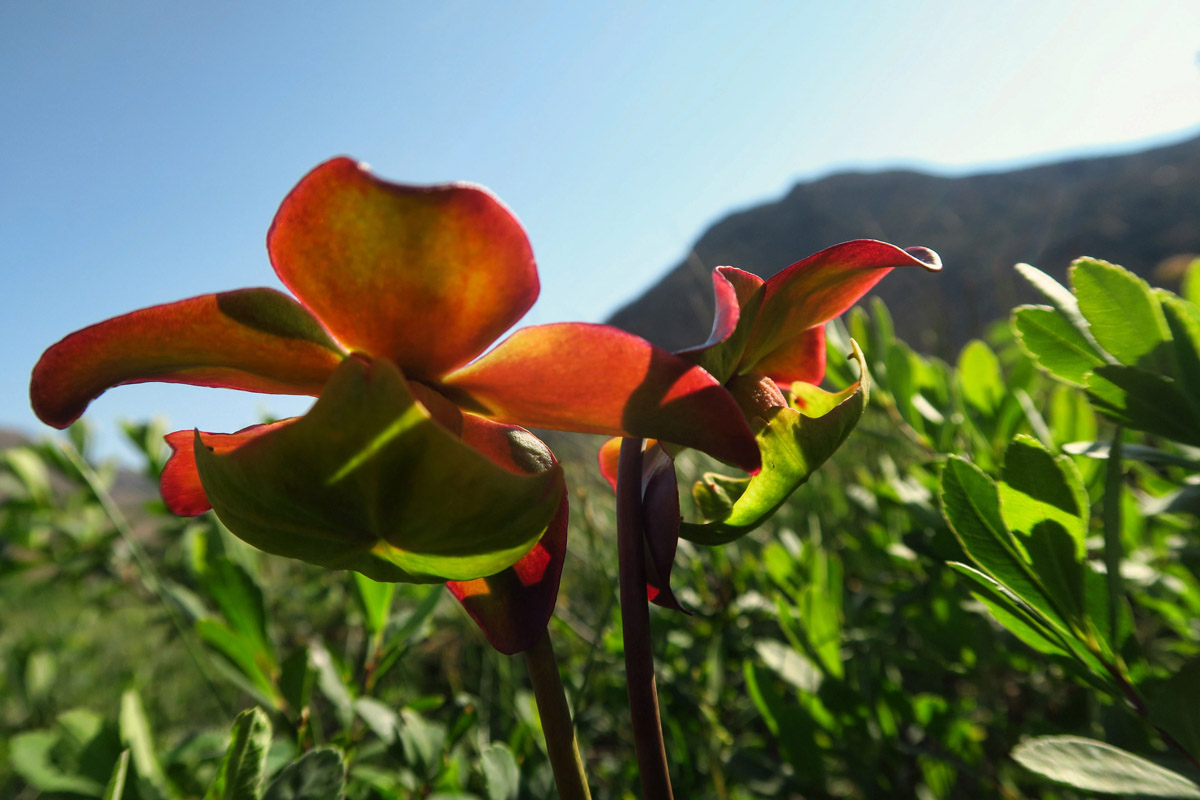 The northern pitcher plant, aka the purple pitcher plant is the floral emblem of the province of Newfoundland. 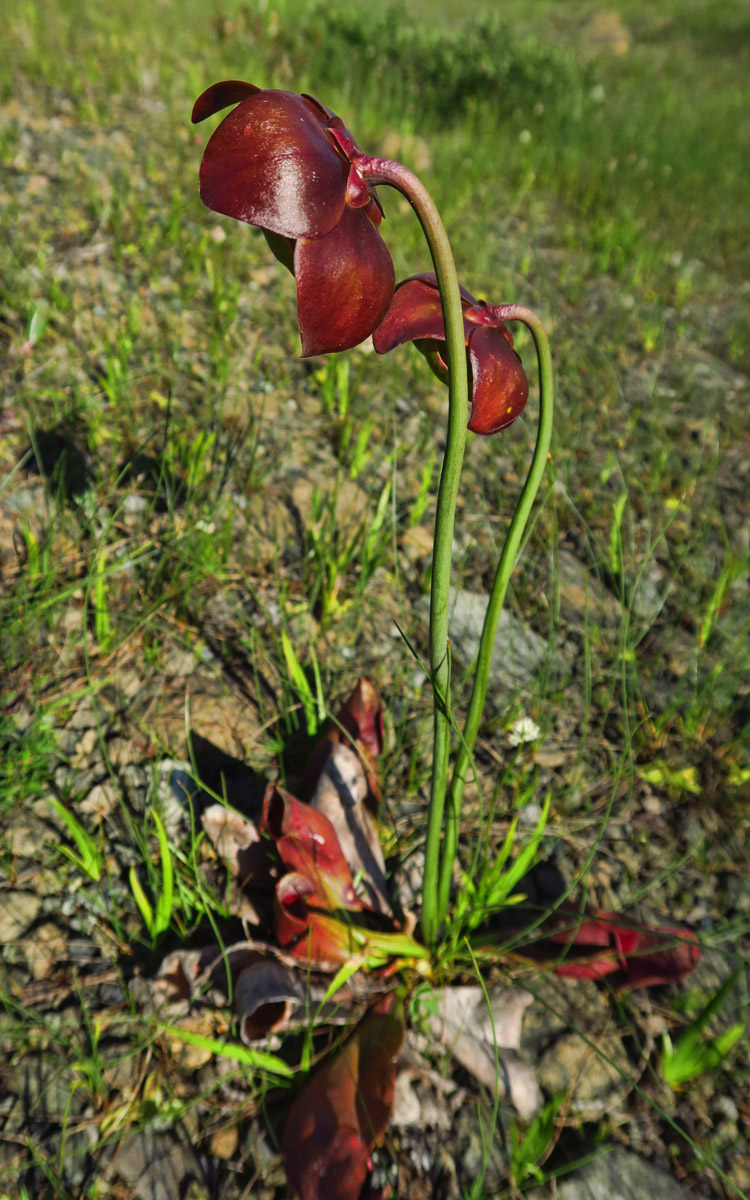 The pitcher plant is carnivorous, with bugs flies and spiders being digested in the lower “pitfall” plant.

Gros Morne National Park offers up not just Tablelands, but a wide variety of hiking, as well as small fishing villages to explore. It’s a little like Acadia National Park which wraps around Bar Harbor, in that the park itself surrounds villages that were established prior to the park. Several of these fishing villages, Trout River, Woody Point, and Rocky Harbour lie opposing each other like a “backwards C,” separated by East Bonne Bay Arm, yet it takes an hour to drive around. 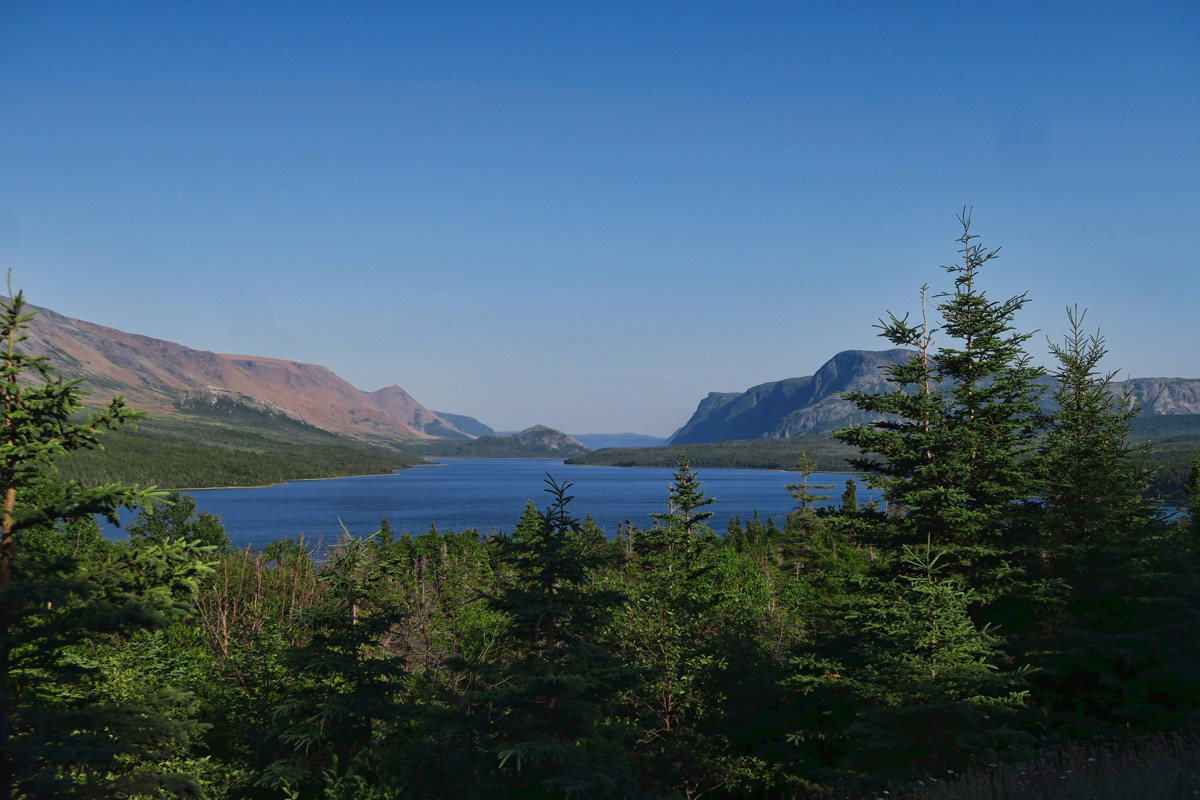 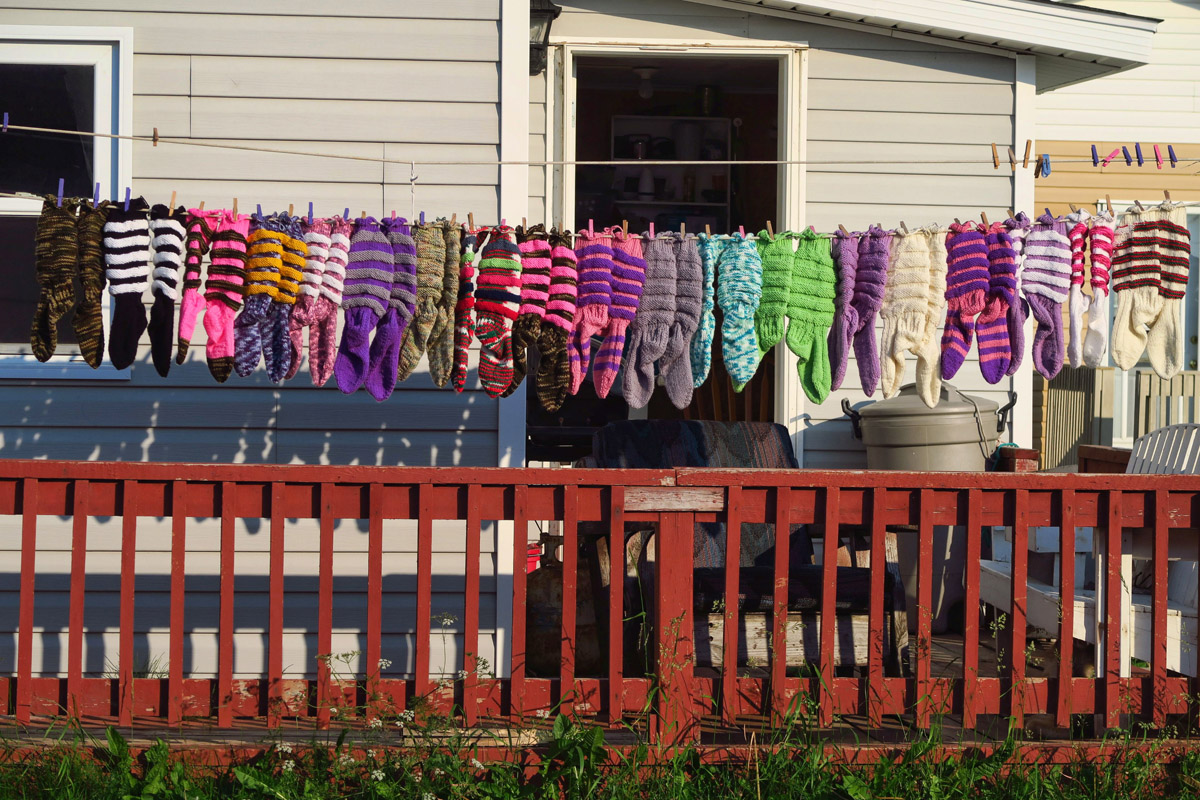 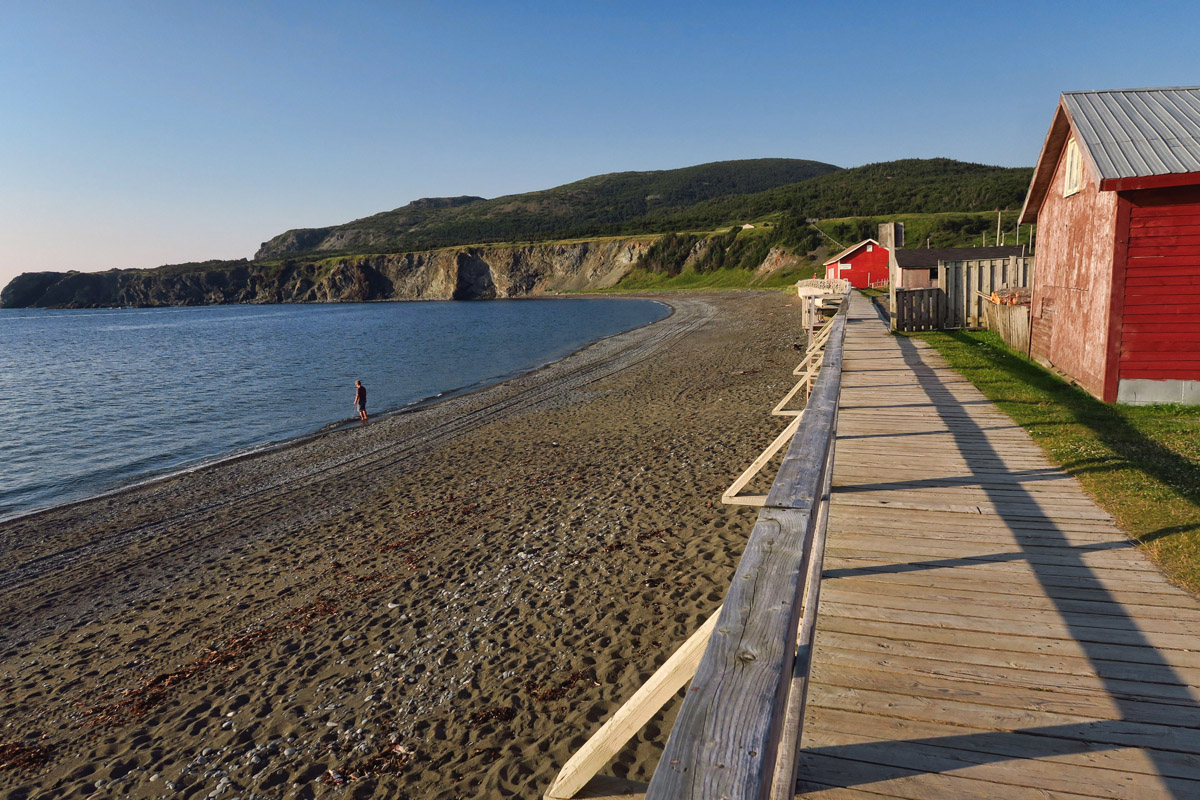 Up next, a day at the beach, a day in the rain, and a delightful Newfie encounter in between as I explore more of Canada’s second largest eastern National Park.

3 thoughts on “The Top of the Bottom of the Earth”