As I see it, there are four areas of interest in visiting Prince Edward Island. First, they are known the world over for their mussels…any seafood restaurant or raw bar worth its seasoning will at some point feature “PEI Mussels” on the chalkboard as a special of the day. The second reason is for the long expanse of beautiful red sand beaches, some of which make up PEI’s one and only National Park. The third reason to visit is if you have an odd curiosity about potato farming, as PEI produces 25% of Canada’s potatoes. And the fourth reason would be “All things Anne.” For those who may not know (myself included up until now) the 1908 novel, Anne of Green Gables, which sold 50 million copies was based on Prince Edward Island. A large museum complex bears the title. I had mild curiosity, but no one attraction was calling to me. Okay, well, maybe the mussels.

There are two ways to access Prince Edward Island. One can go by ferry from Caribou, Nova Scotia, or via the Confederation Bridge, an eight mile span across the Northumberland Strait to New Brunswick. In both cases, you only pay when you exit the island. Since the ferry is more expensive than the bridge, I chose to enter via ferry, and exit across the bridge.

With tourism being one of PEI’s largest industries, the island is well laid out in tourist routes, cordoned off into four separate scenic drives. As with all the Canadian Atlantic provinces, there is a free tourist map accompanied by a guidebook available at the Visitor Centers. The map illustrates each of the four sections drawn in color coordinated routes on the map, each section wrapped in a different color of road like tidy little bows. The large center section of the island is dividend down the middle into the Red Sands Shore Drive to the south and the Green Gables Shore to the north. On the west end is the North Cape Coastal Drive, with Points East Coastal Drive at the opposite end. Although Prince Edward Island does not appear to be that large, to do all four scenic drives would mean 669 miles. So I start down the middle…

The scenery through the interior of the island is serenely pastoral. Rolling green hills, terraced potato fields edged in borders of brilliant yellow canola blooms. Steeply gabled farm houses punctuated by bright polka-dotted flower beds sit squarely in the middle of the fields, surrounded by farm equipment indicative of the independent farmer. The peaty, iron smell of the freshly plowed rust red soil reminds me of making mud pies in the red sandy dirt at my grandmother’s house.

Not having one specific attraction that I want to see here, I decide to make my focus the lighthouses, knowing they would likely bring me to some scenic coastal areas. However, I soon realize that the PEI Lighthouse standard, white clapboard squarely flared towers trimmed in red, topped with a lone white maple-leaf all start to run together. It’s like an Easter egg hunt for the same egg. So after a couple of days of driving the ribbon roads, my craving for mussels now satisfied, I make my way toward the Confederation Bridge bound for New Brunswick. 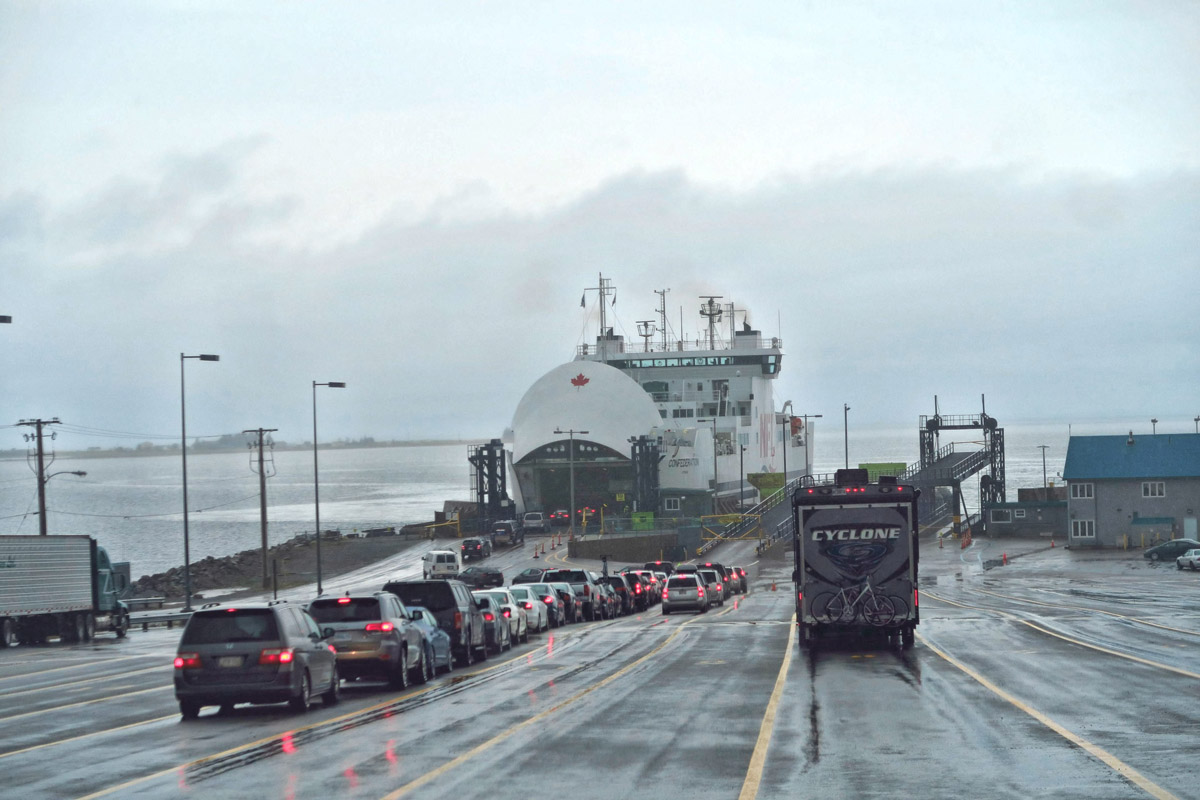 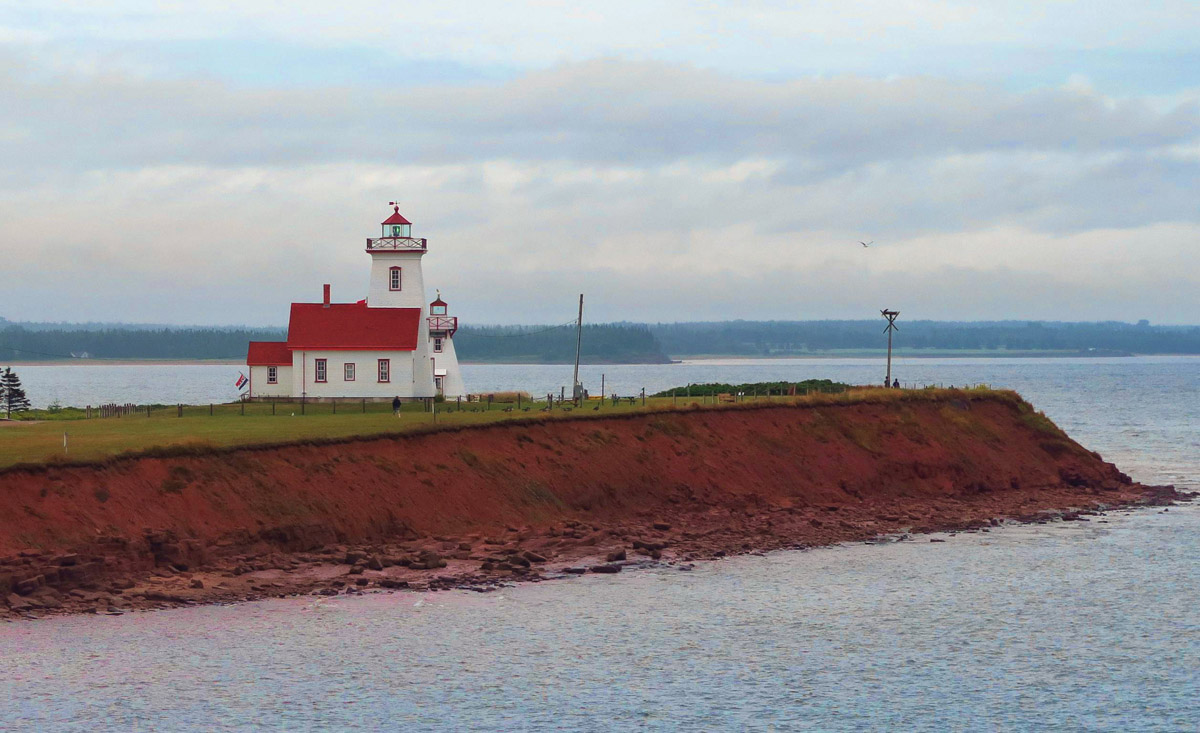 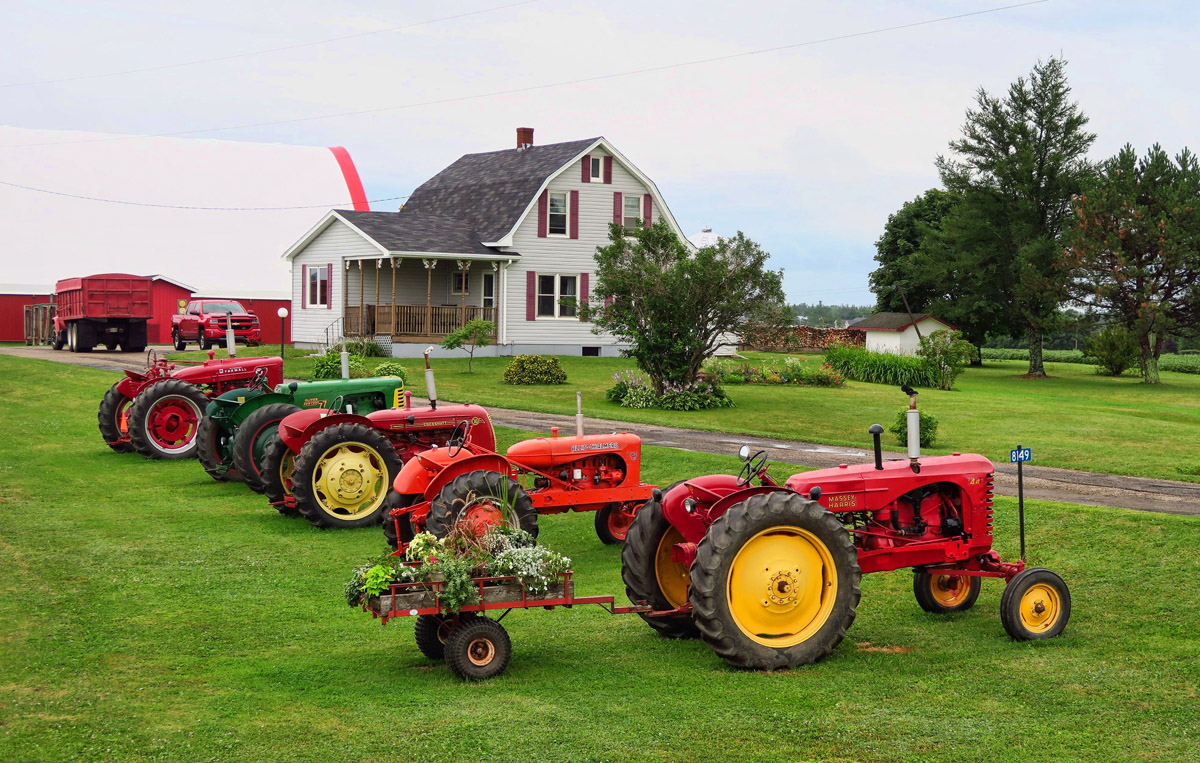 Pastoral scenes driving across the island south to north. 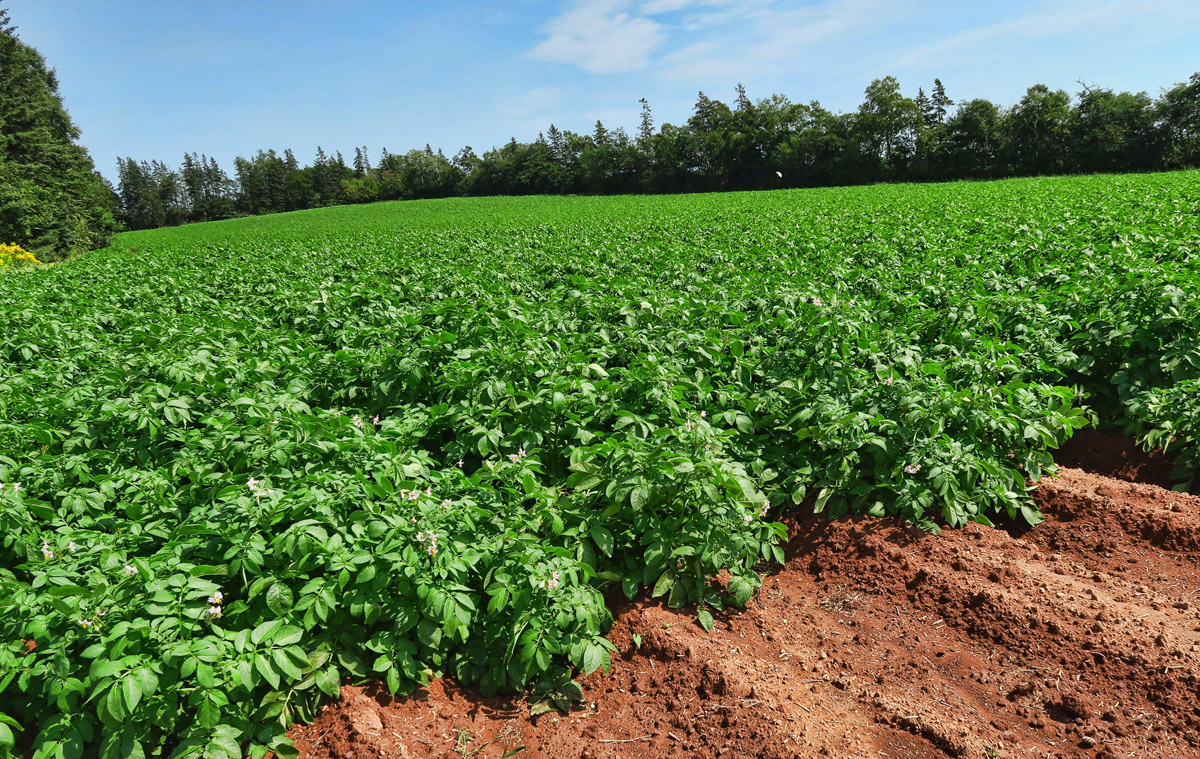 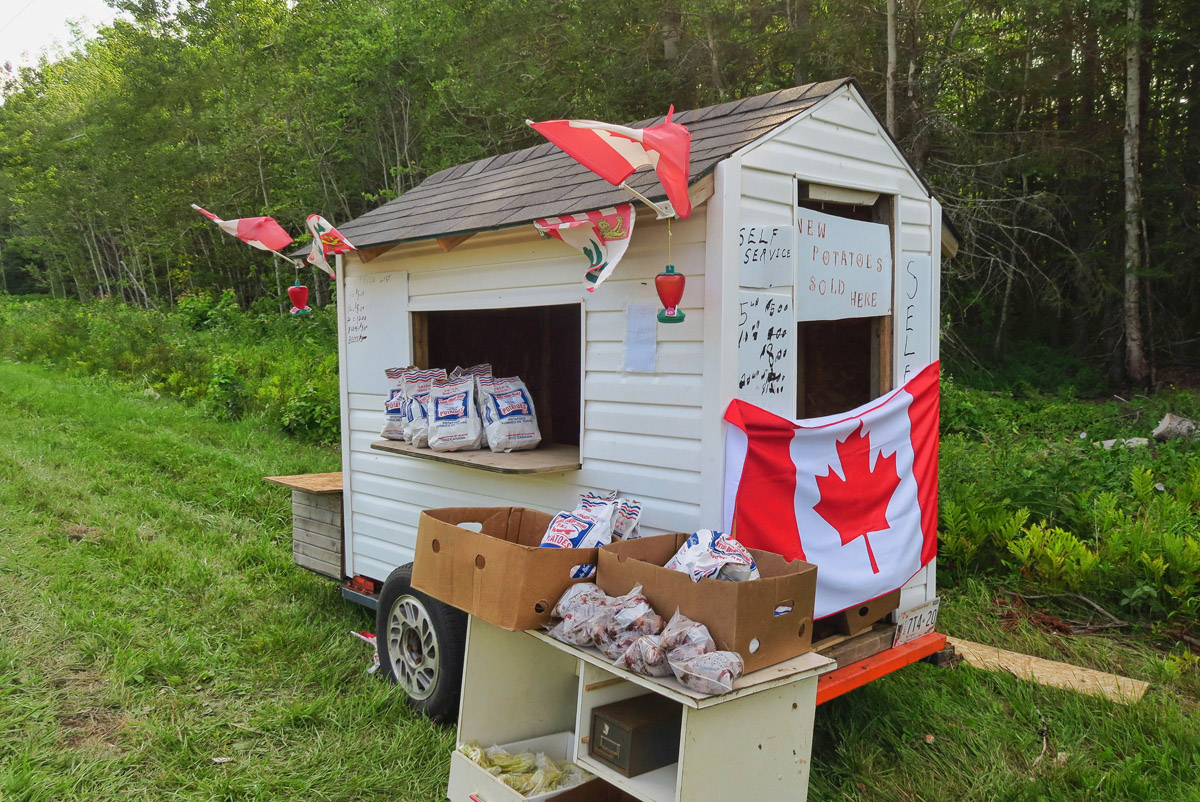 Sacks of potatoes sold on the honor system along the roadside. I still can’t believe the US Border Control did not make me surrender my PEI souvenir. 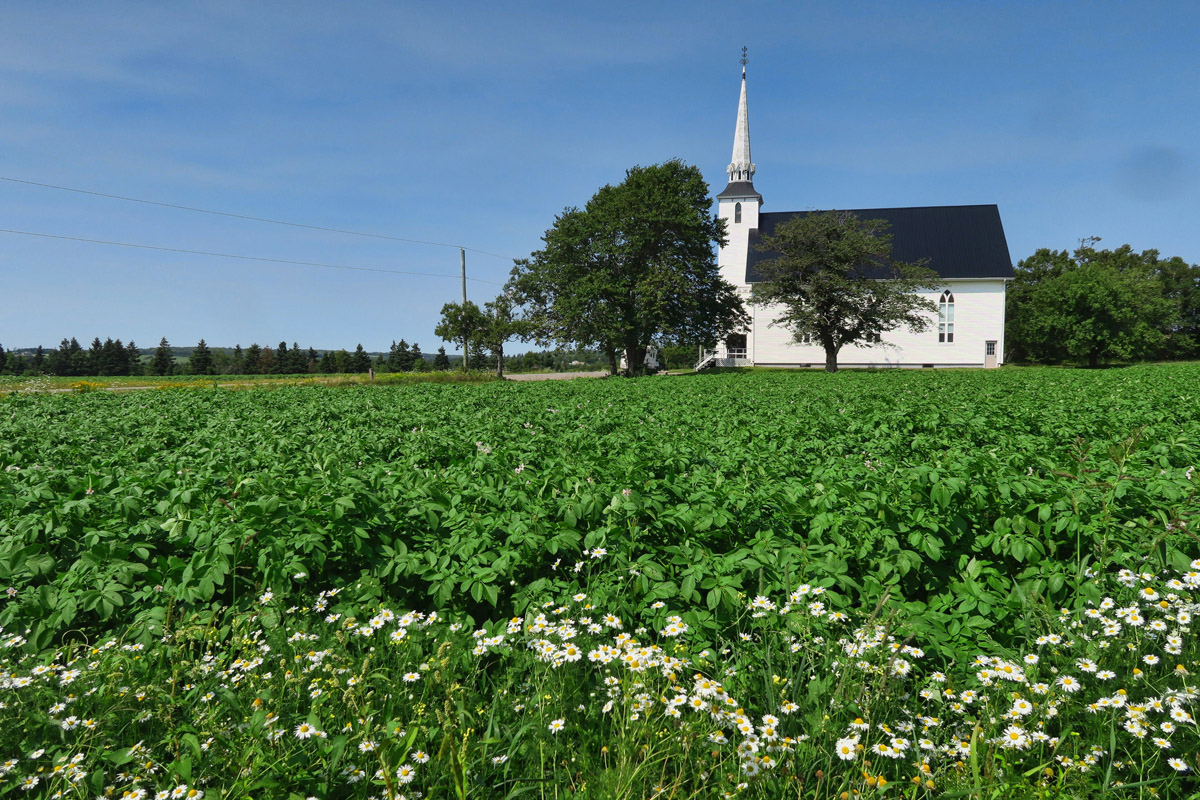 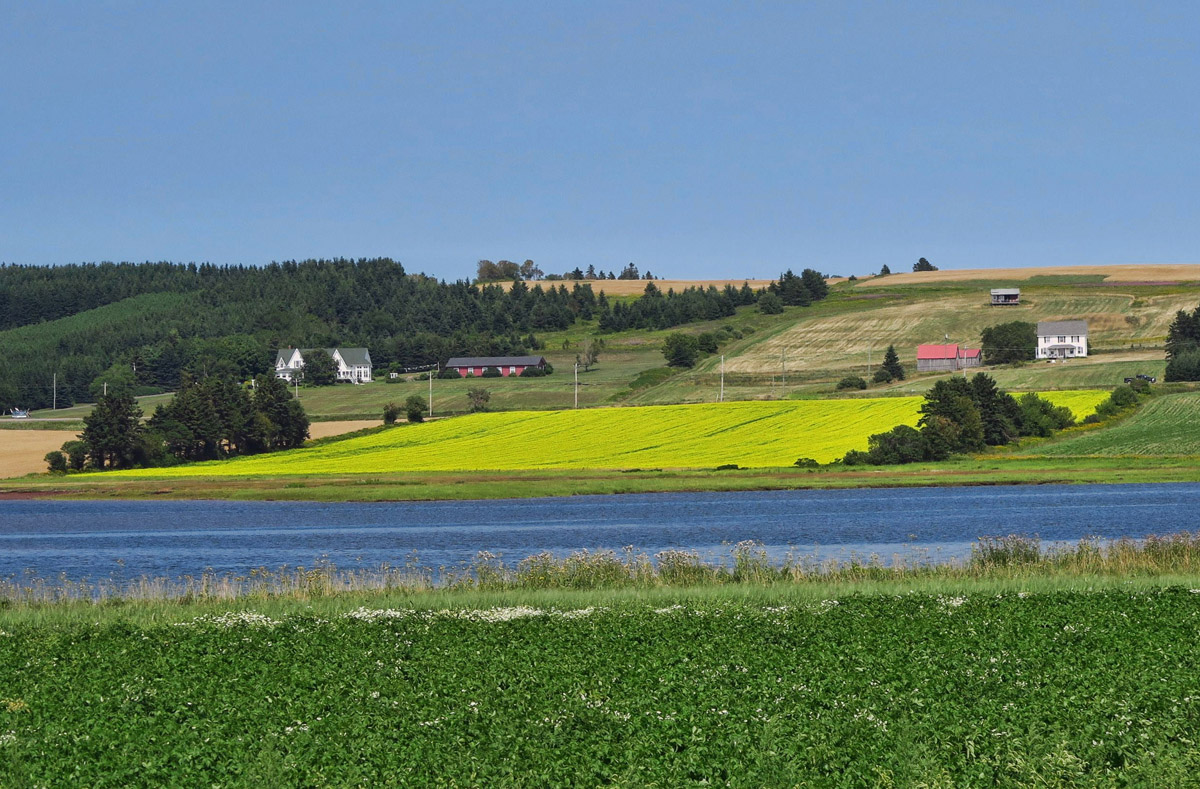 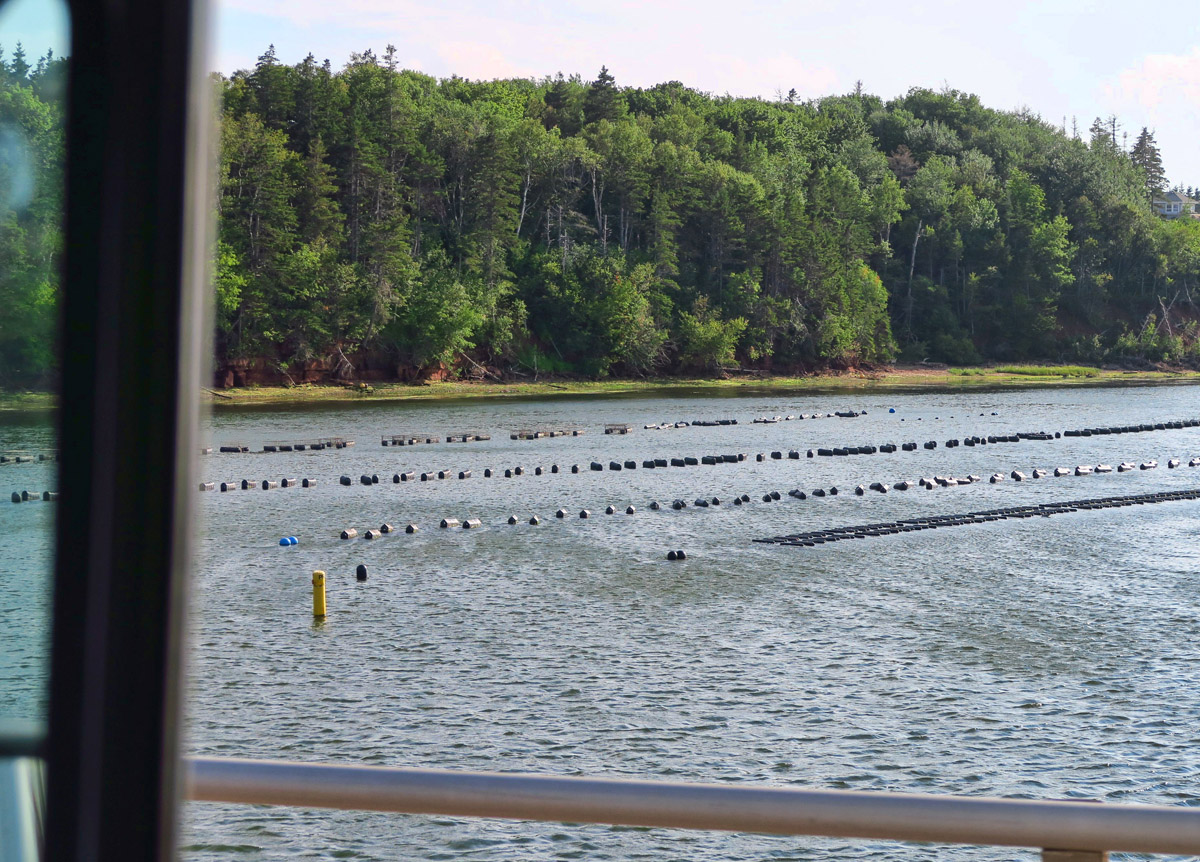 Although PEI is known for an abundance of fresh seafood, they are best known for their PEI mussels.   A drive-by shot over a bridge where they are cultivated. 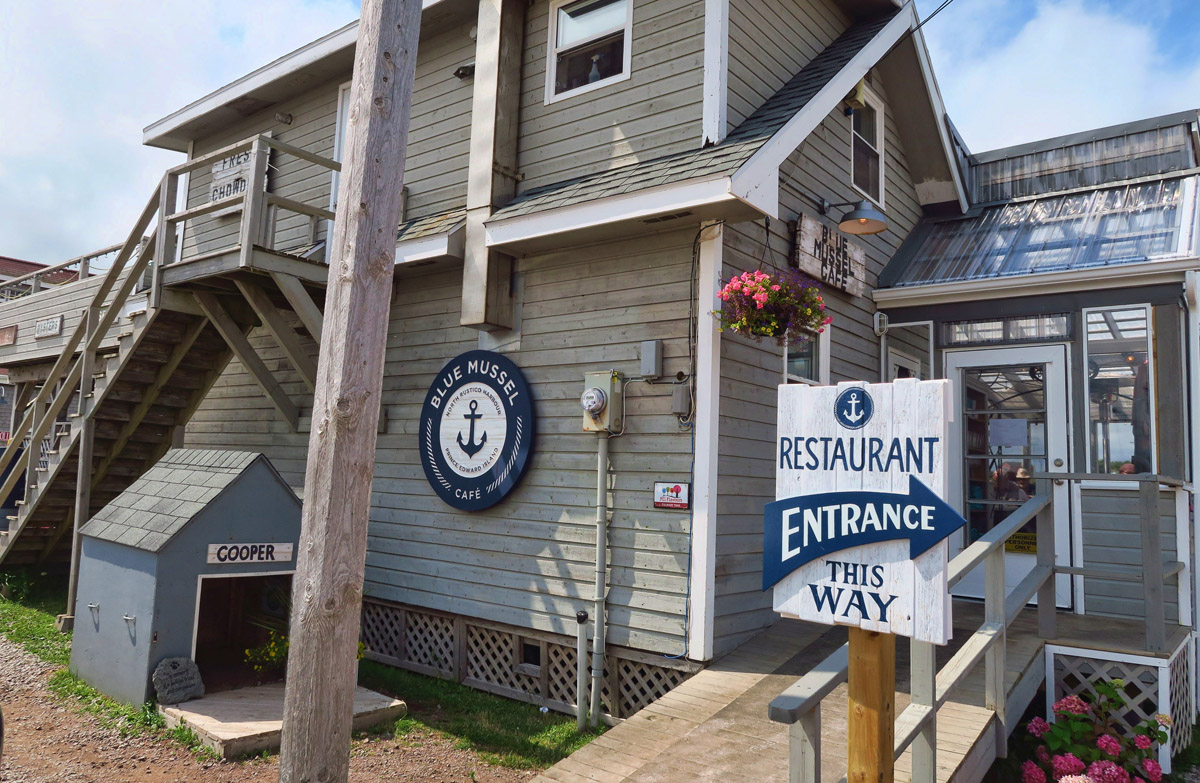 Don’t miss the Blue Mussel Cafe! It was so good, I went there twice! The friendly owner is a delight. He’d never owned a restaurant before, and now he is #1 on TripAdvisor. 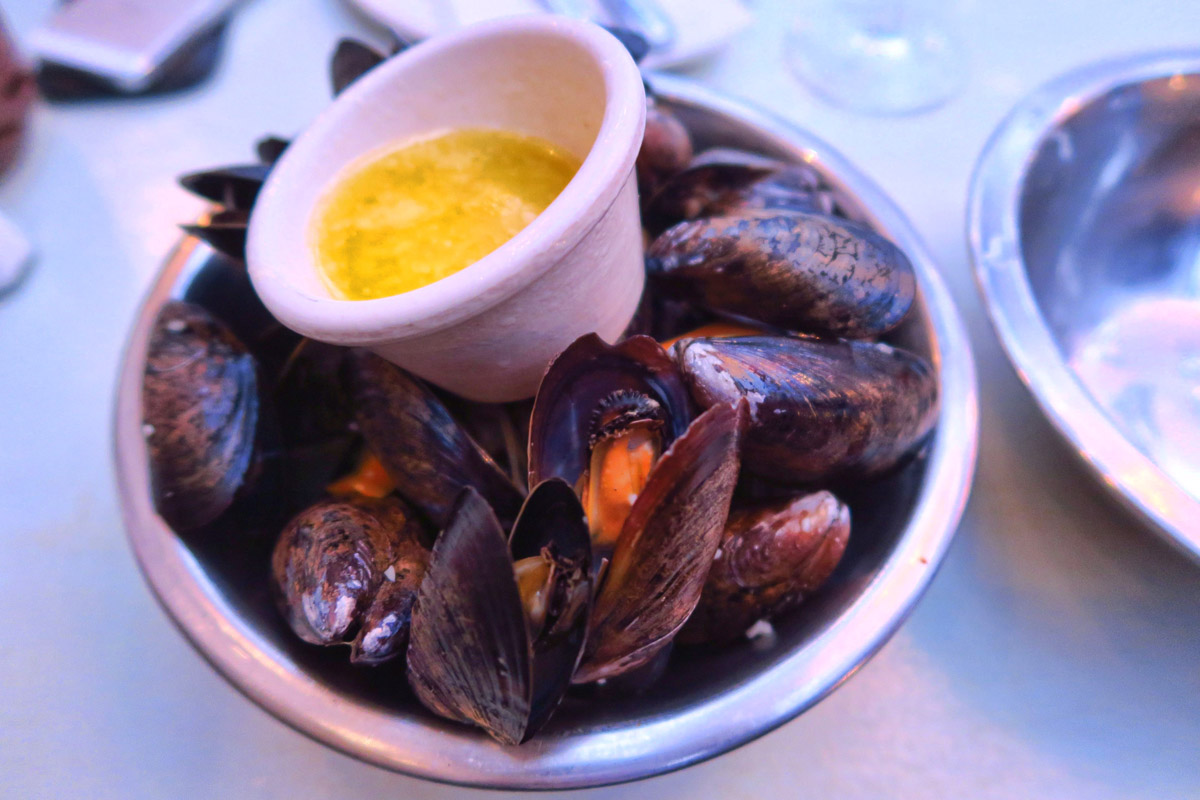 They were every bit as tasty as I had anticipated! 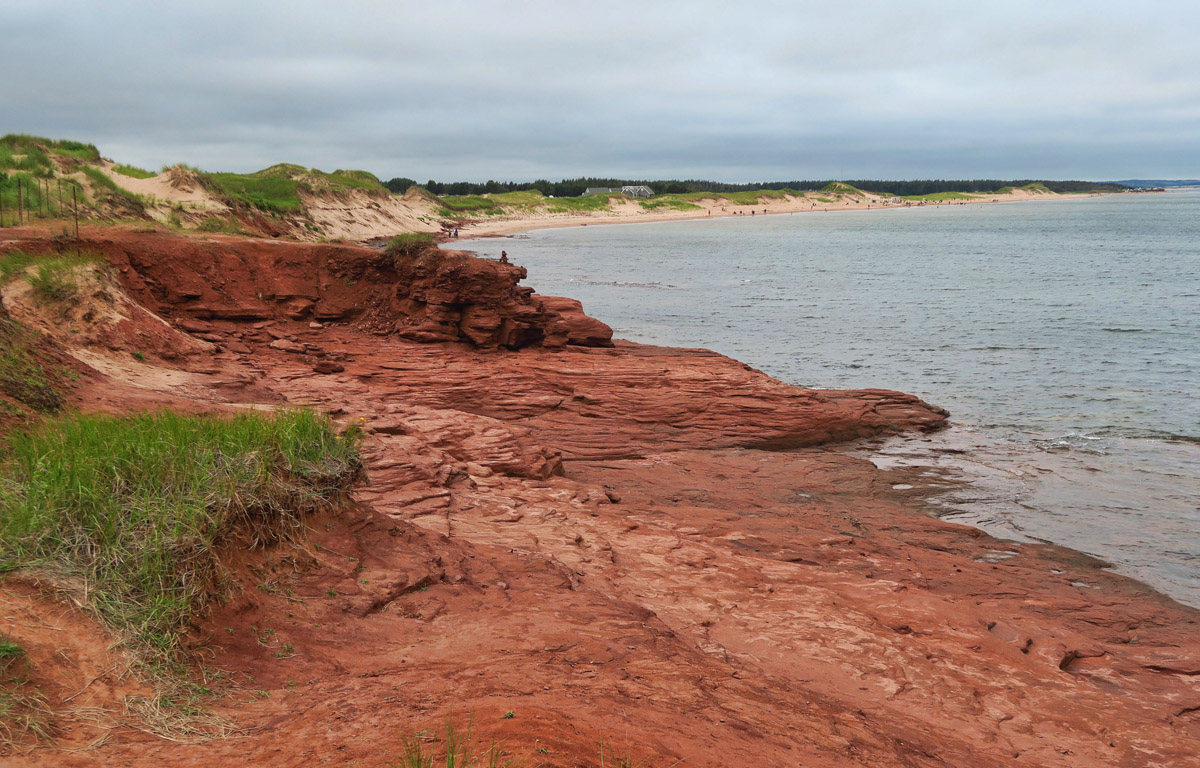 PEI is also known for both white and red sand beaches. Here you can see both, with white in the background and red in foreground. 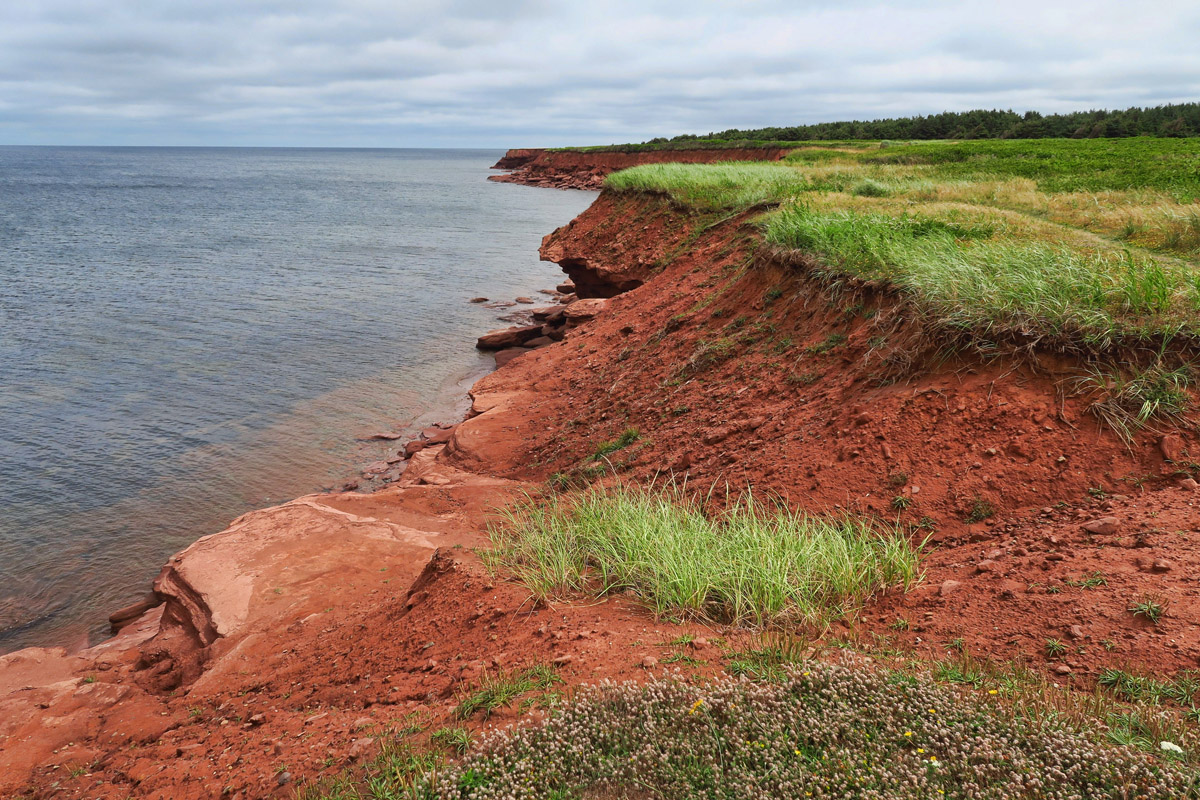 The best known of the red sand beaches is Cavendish Beach inside PEI National Park. 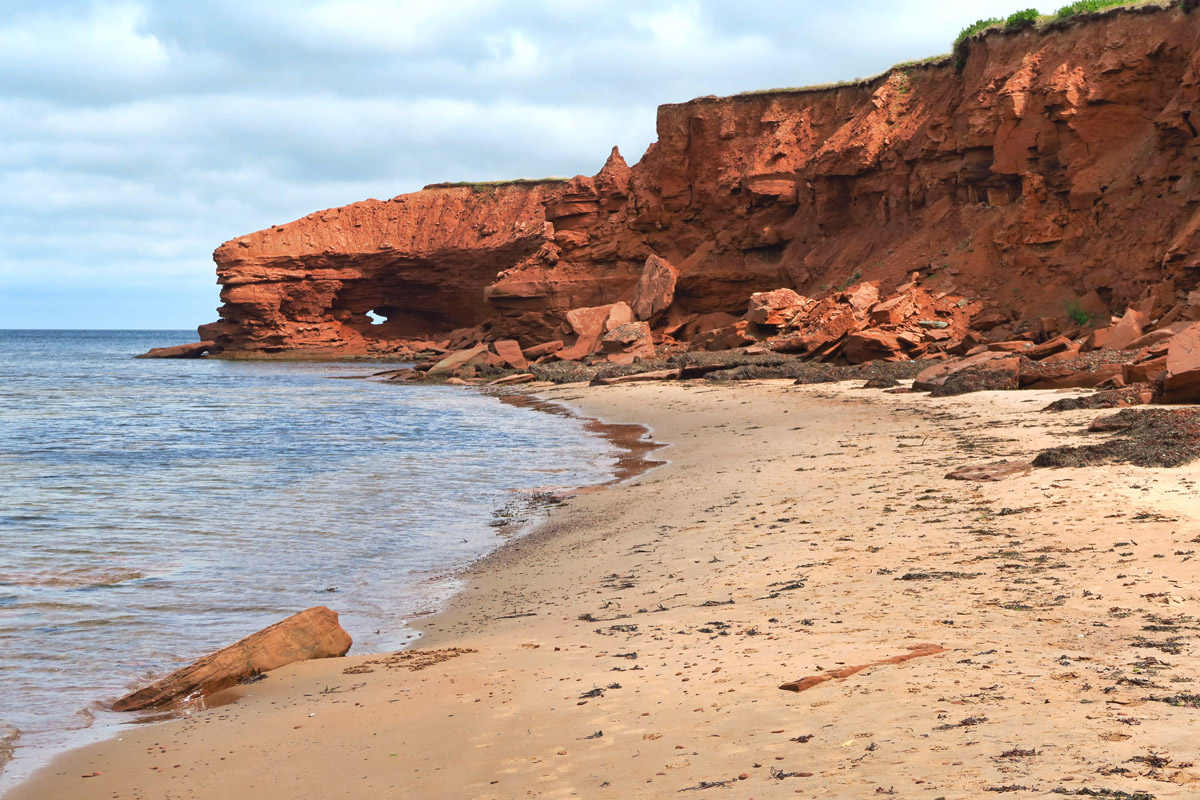 Note “Hole in the Rock.” 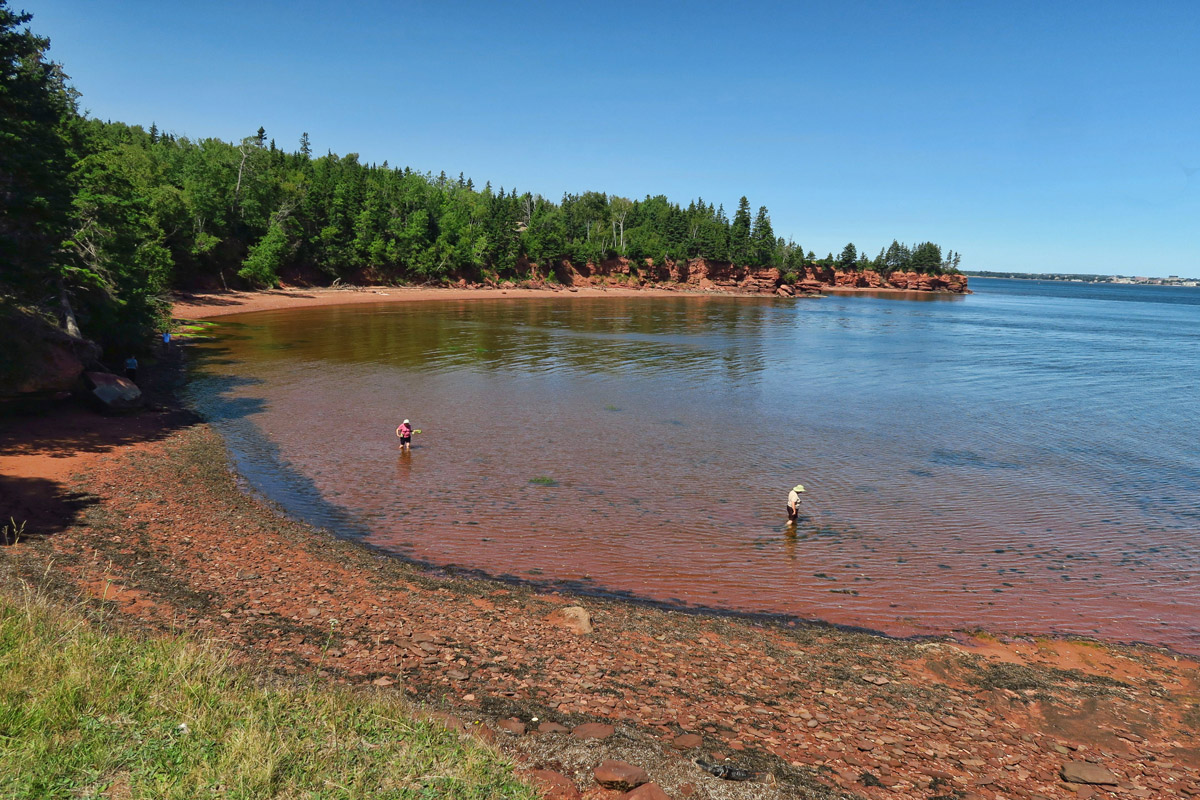 Due to the Northumberland Strait’s shallow depths, PEI boasts of the warmest waters north of the Carolinas. 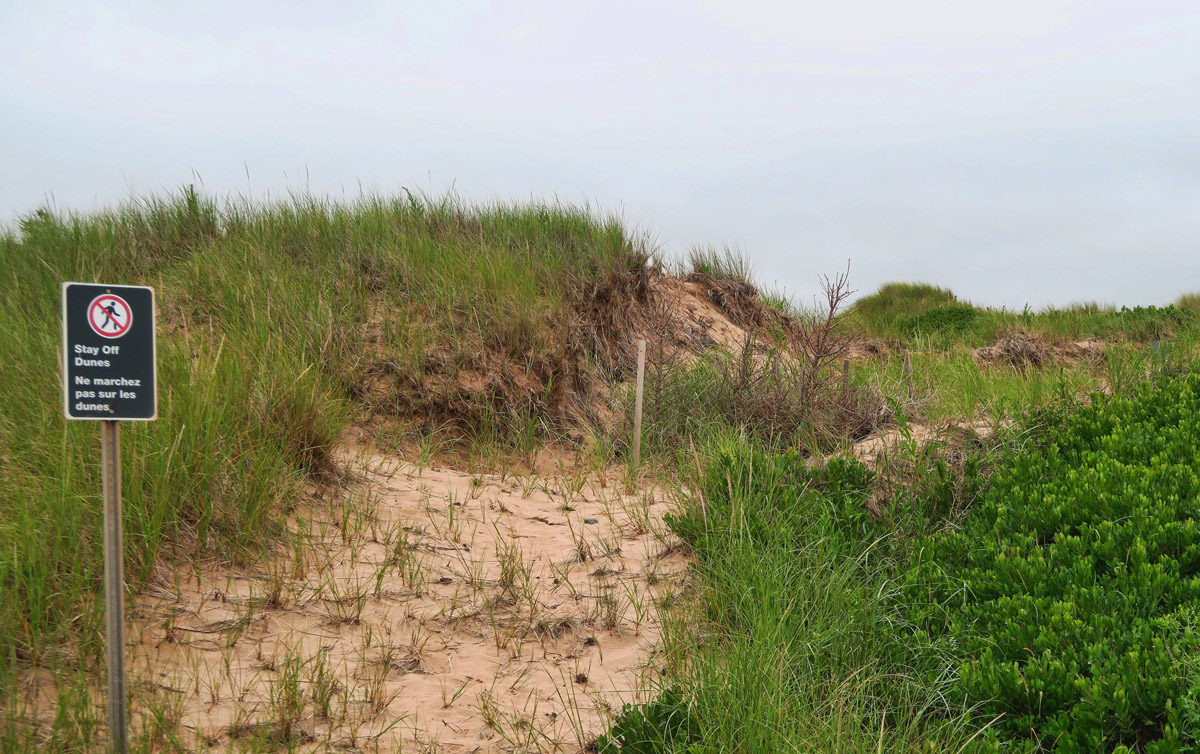 PEI has a project underway with volunteers from the local High School to protect the eroding dunes. They use recycled Christmas trees to trap the shifting sands and discourage climbing on the dunes. 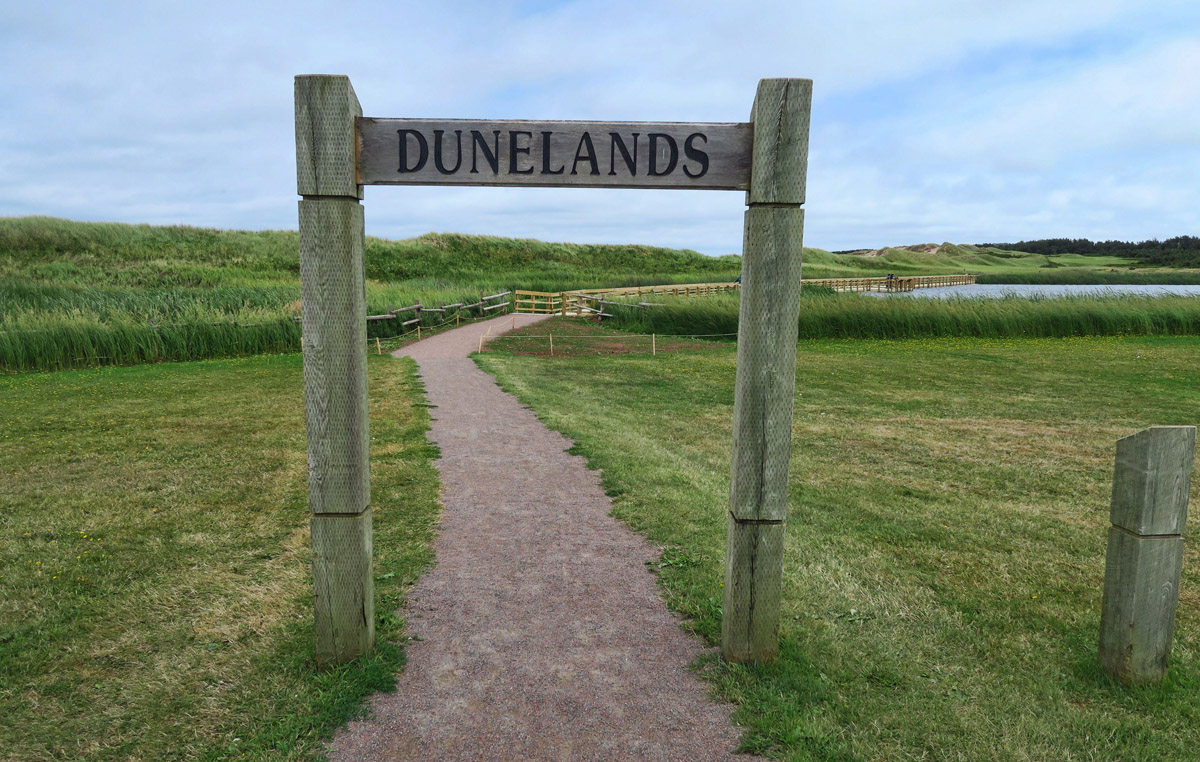 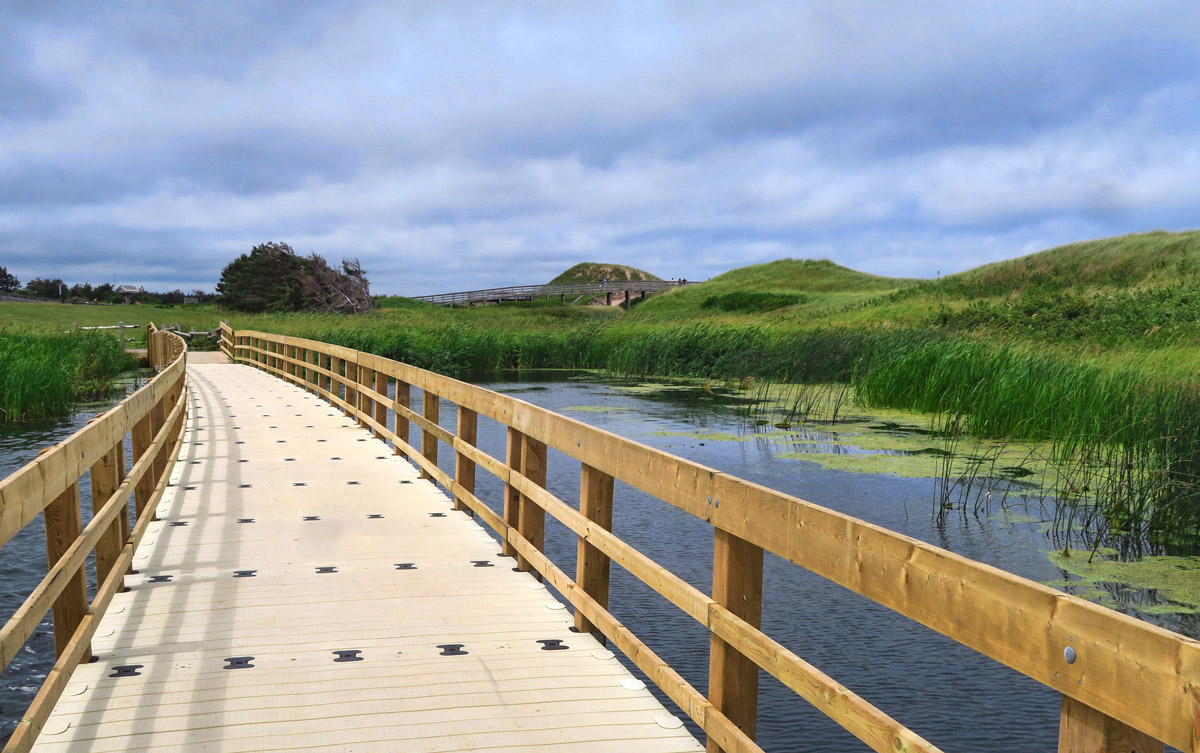 A “floating boardwalk” along one of the National Park trails. 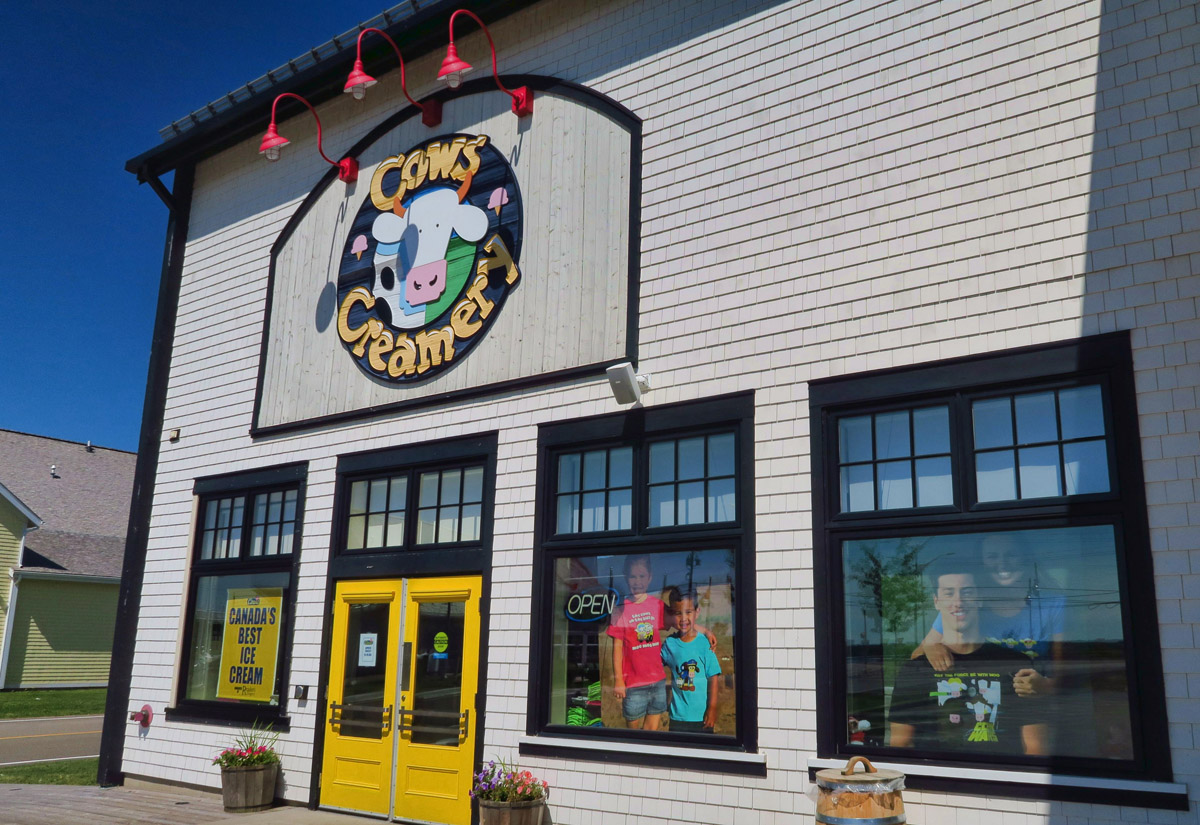 PEI’s famous “Cows Creamery” sells butter, cheese, and of course what is billed to be “Canada’s Best Ice Cream.” 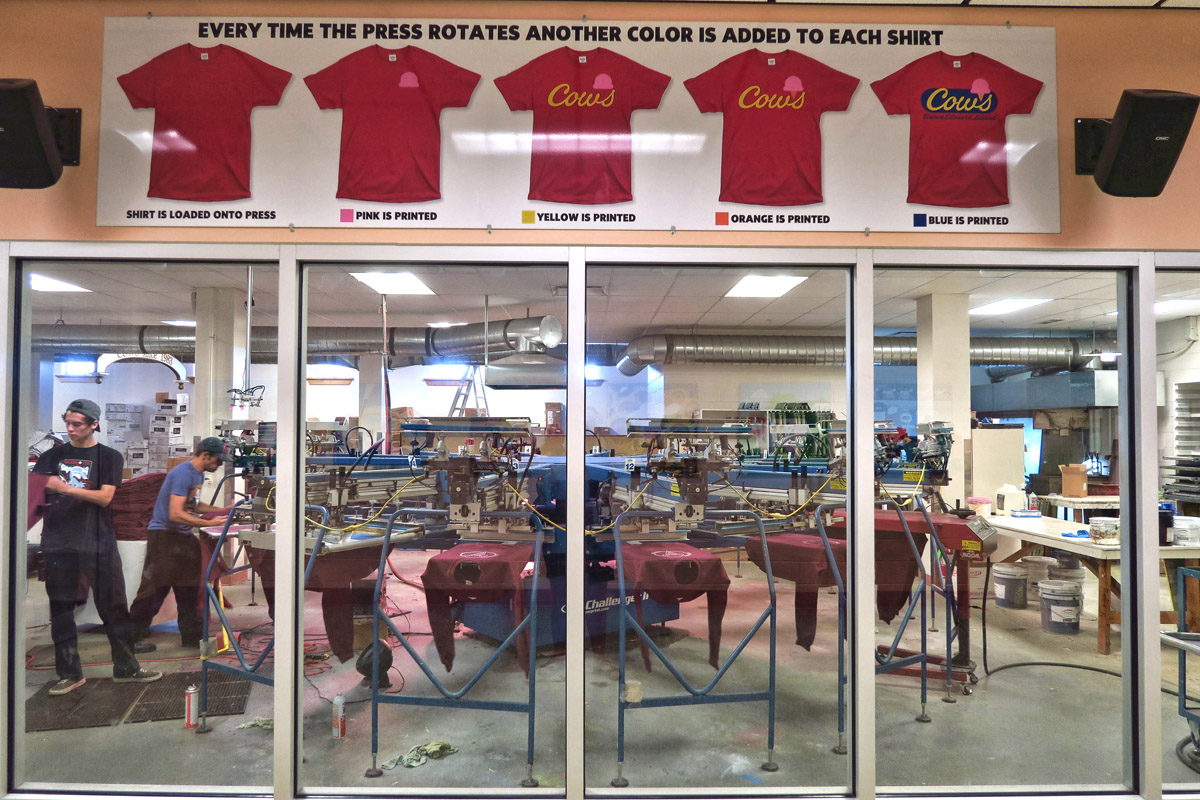 While known for their dairy products, Cows Creamery is also famous for their tee-shirts featuring the culture of the common cow. Tee-shirts are printed in house, and are part of the self-guided factory tour. 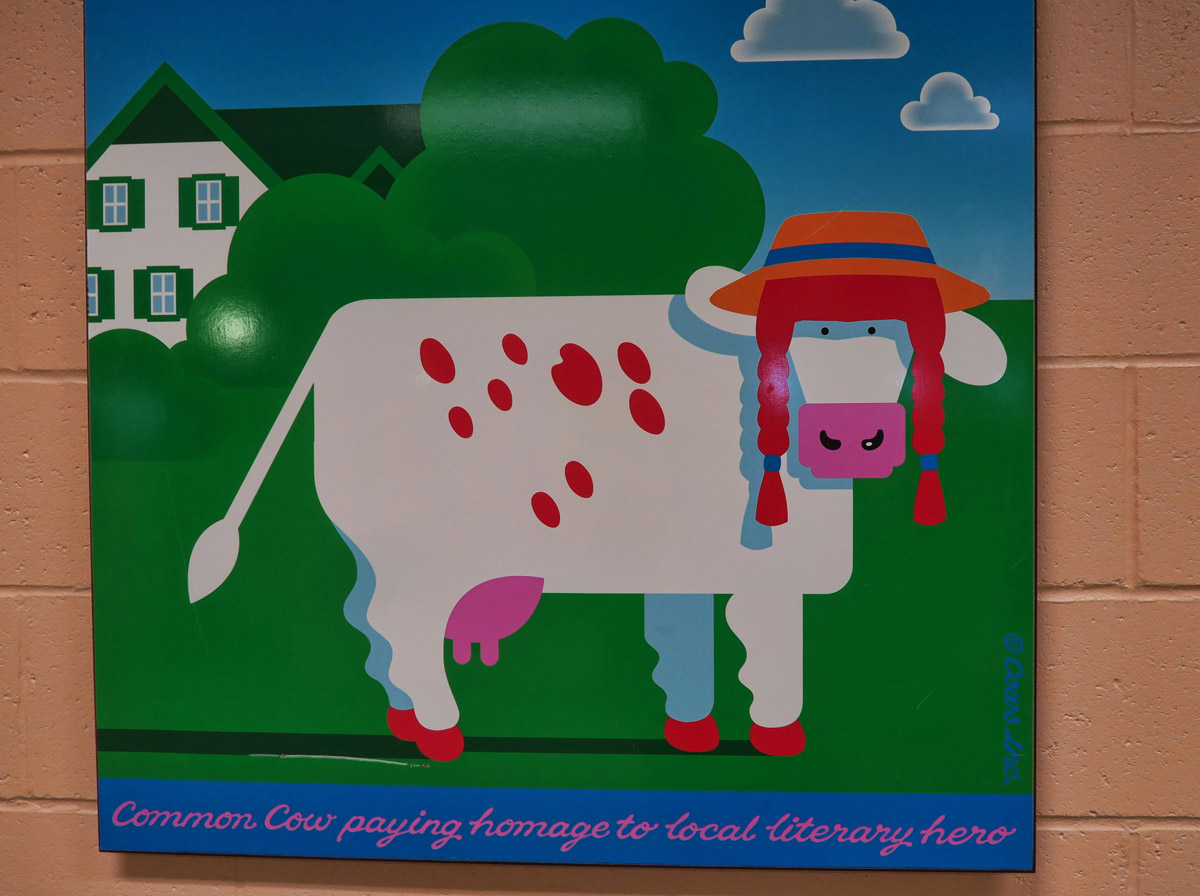 If you are a fan of Anne, you might be interested to know this is the birthplace of the author, Lucy Maude Montgomery, born 1874. 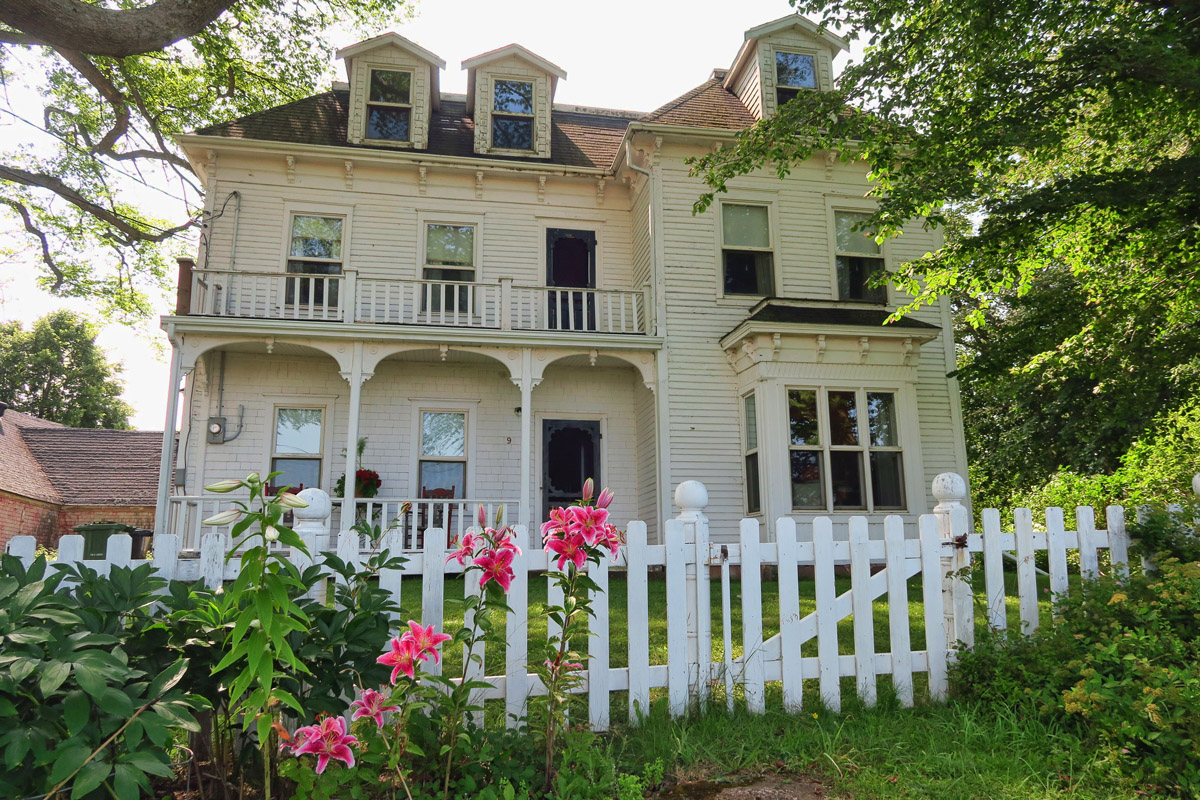 One of the many beautiful homes in Victoria-by-the-Sea, a historic town along PEI’s south shore. 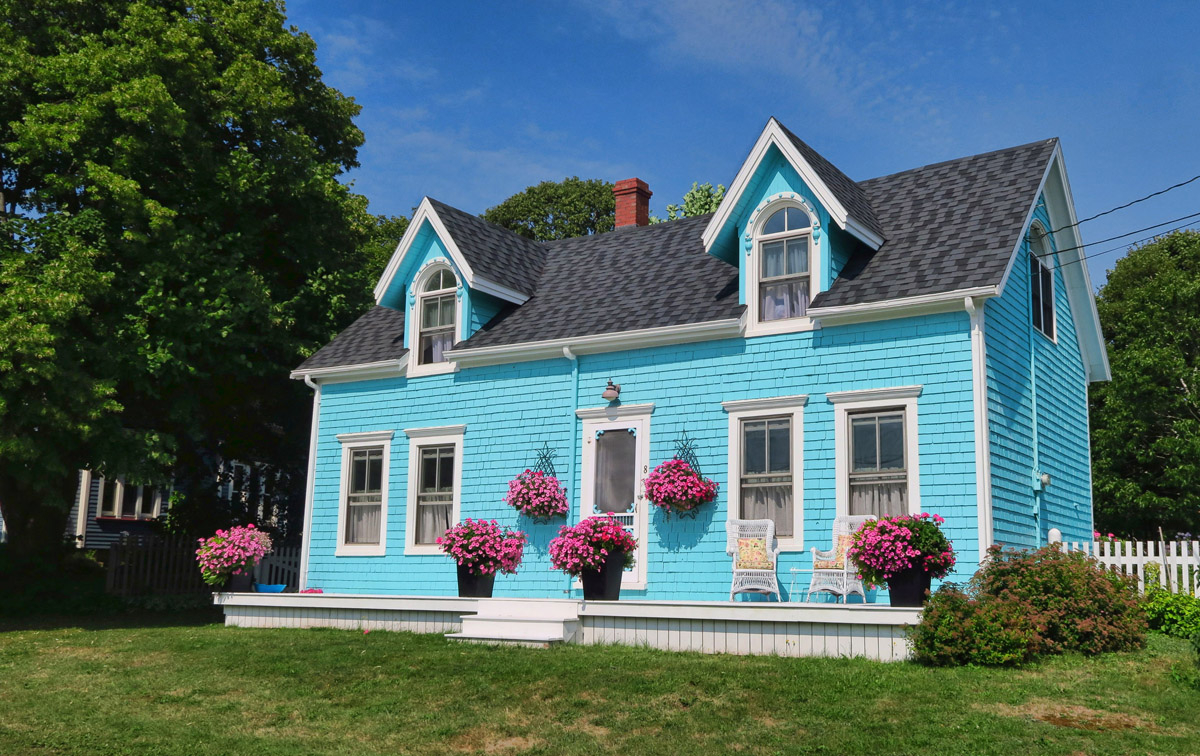 The picturesque little village with its shops and waterfront restaurants is a popular but quaint tourist stop. 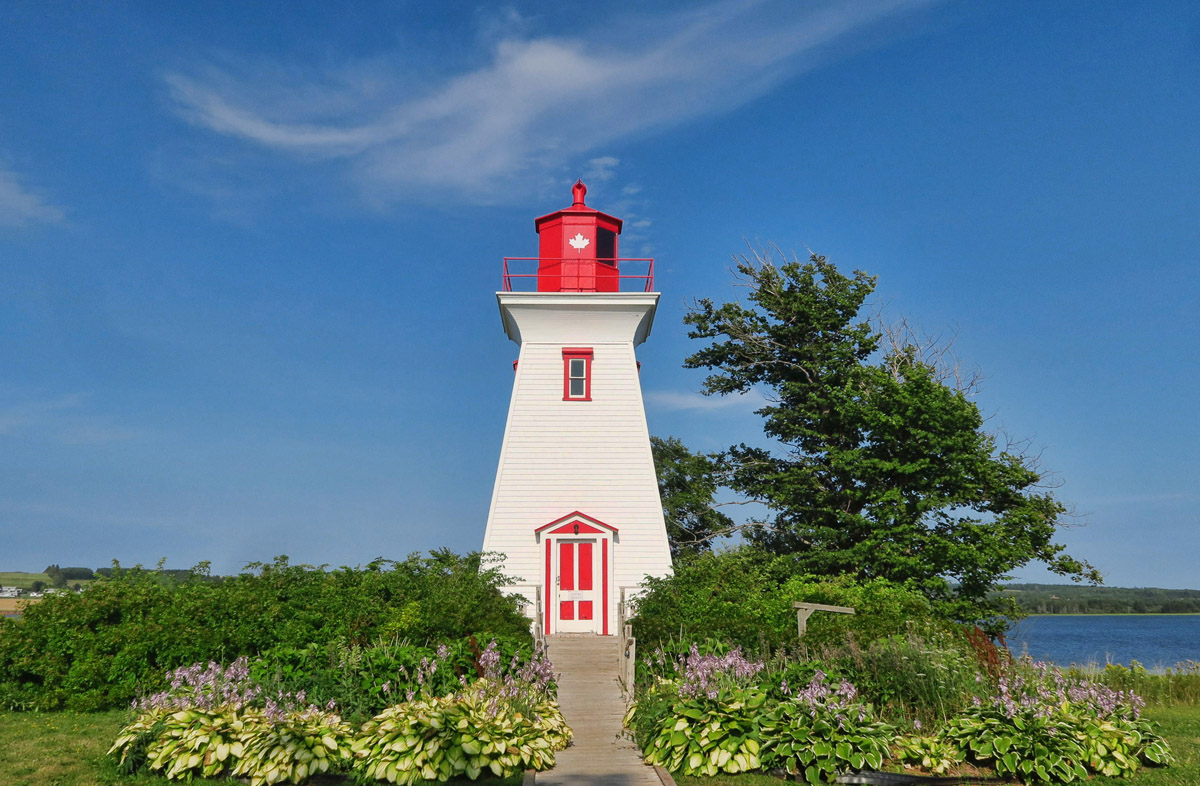 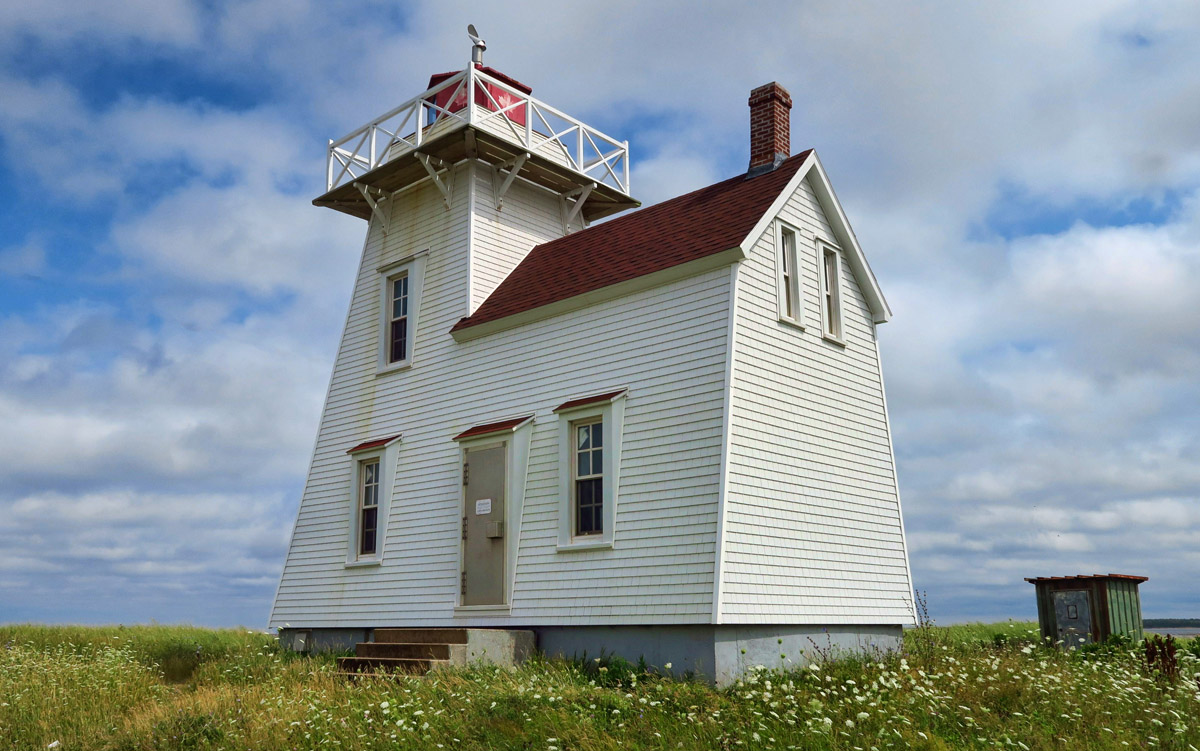 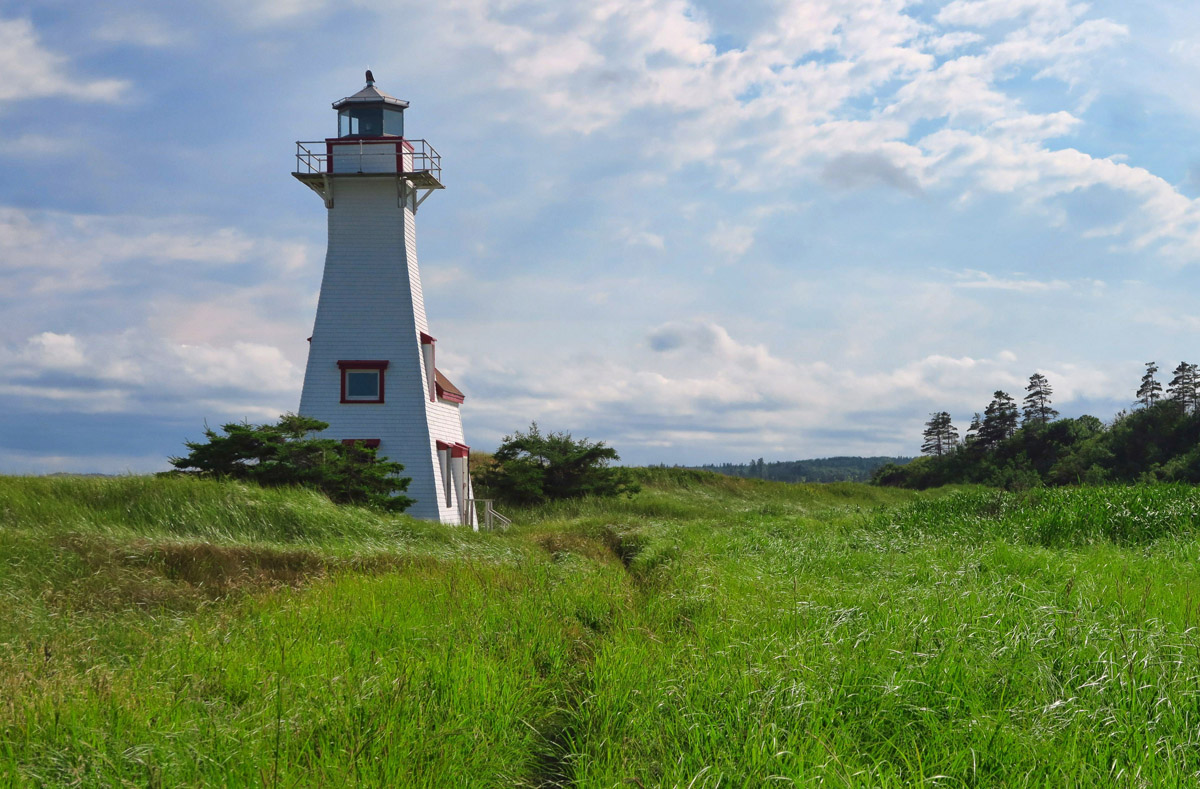 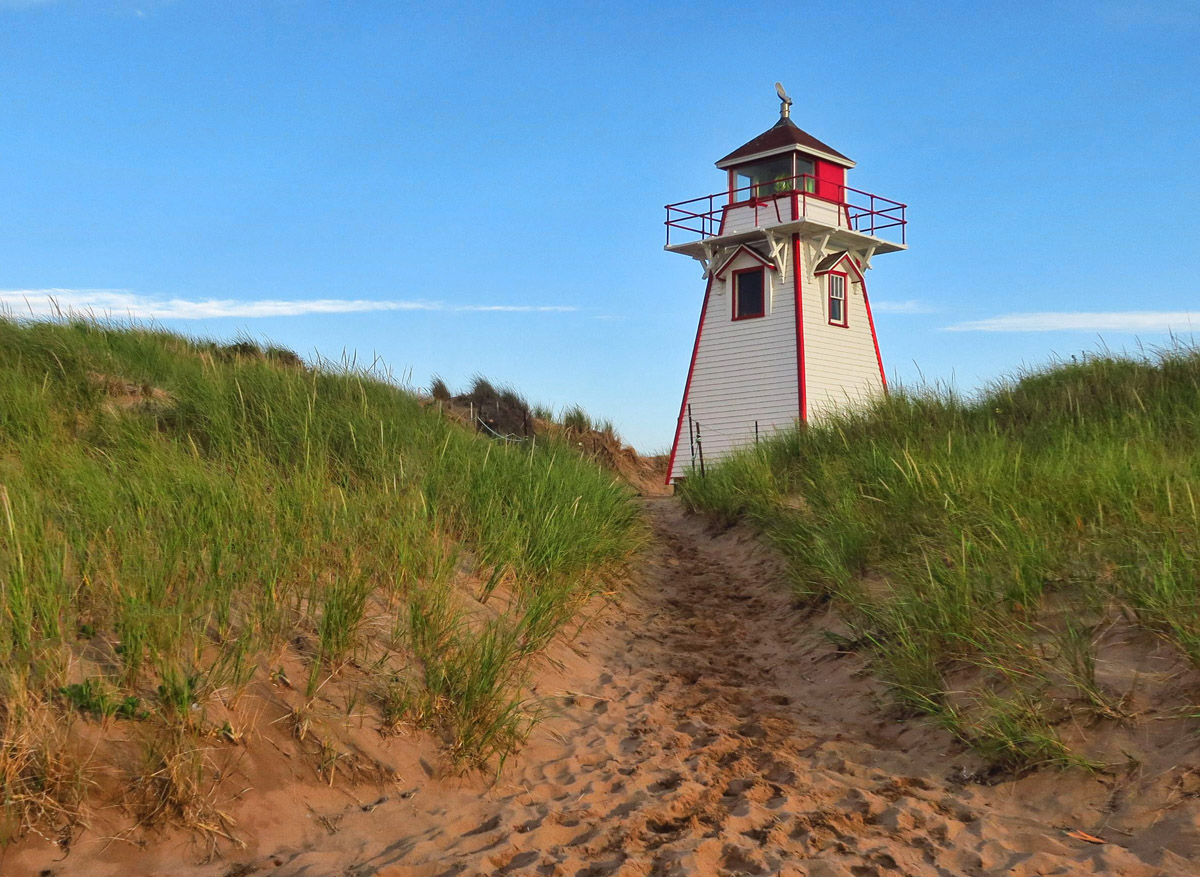 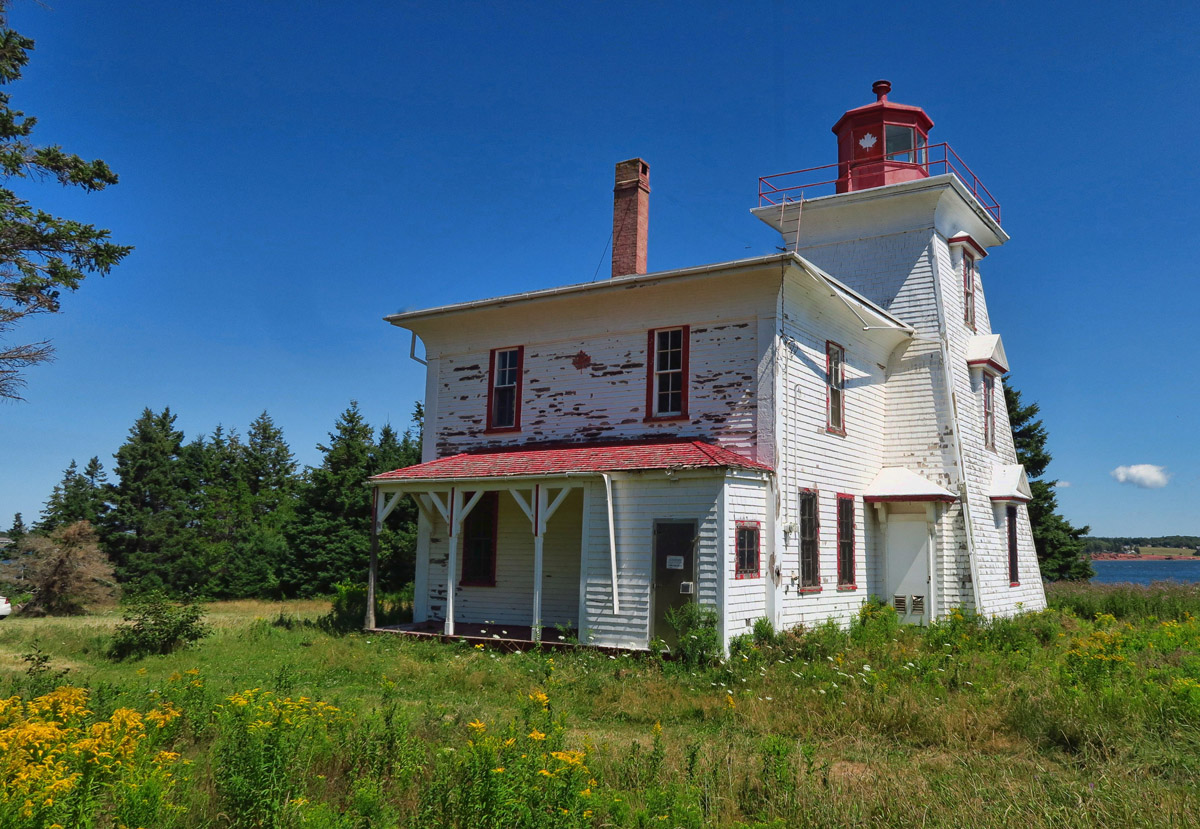 Blockhouse Point Lighthouse. (I would fix this beauty up with a nice paint job if they would let me live here!) 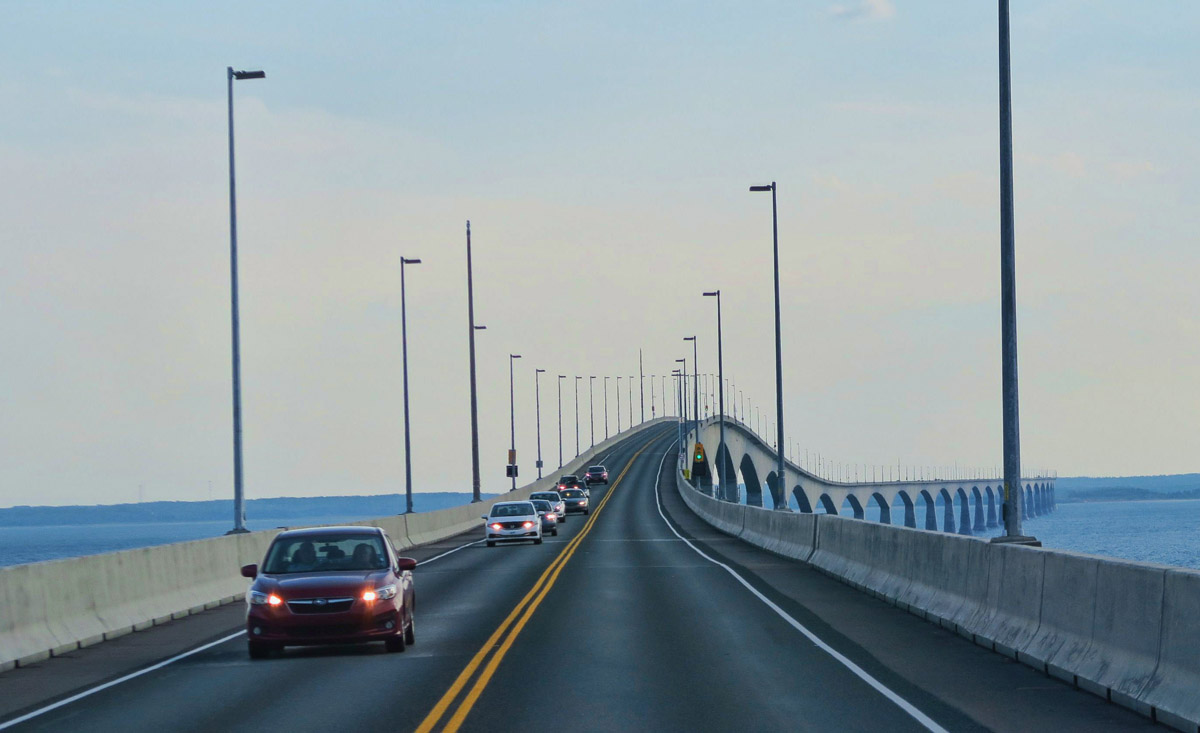 Crossing the 8 mile Confederation Bridge over to New Brunswick, which carries the Trans-Canada Highway. 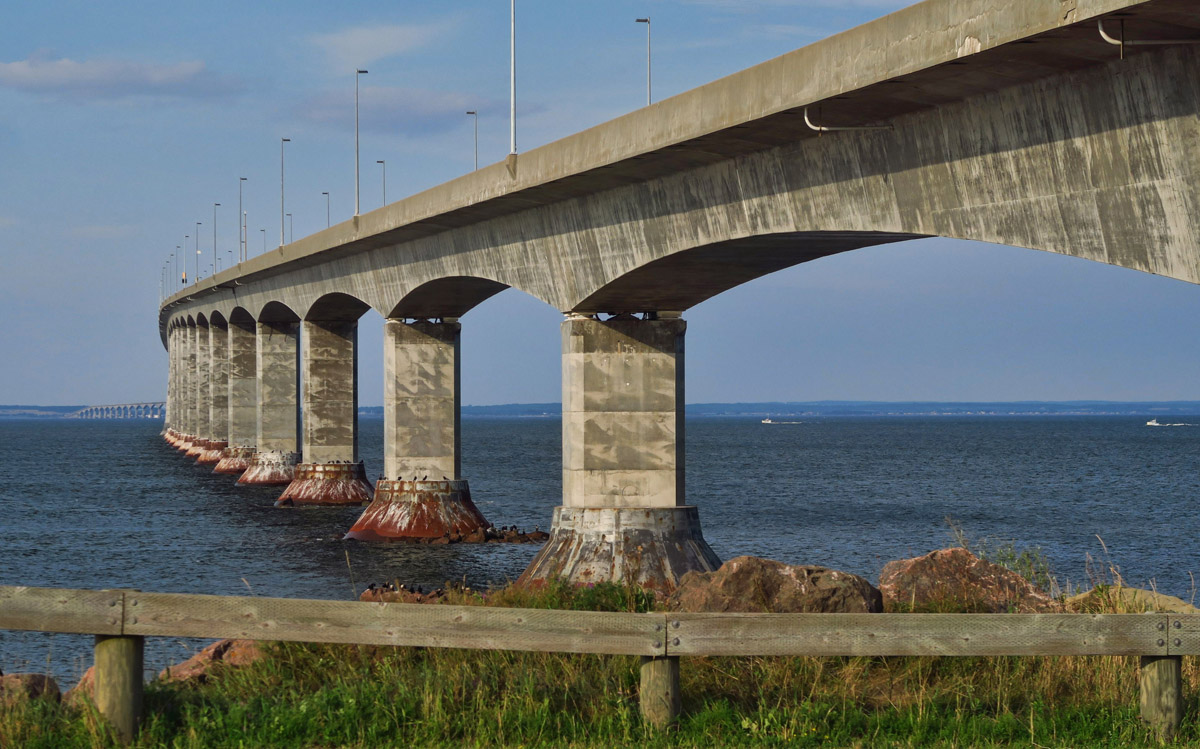 Prior to completion in 1997, the only way to access PEI was via ferry.