First and foremost, thanks to everyone for their very kind comments regarding my “Canadian Summer Series.”  There is nothing so gratifying to one who loves writing and photography than for someone to say “You took me there.” Every last one of your comments were a welcome companion as I charted my solo course through unfamiliar territory.

On a recent visit to the local Chinese Food take out joint, I received an amusing question in my fortune cookie (what ever happened to actual fortunes in fortune cookies??)  “If a turtle doesn’t have a shell, is it naked or homeless?”  That sort of sums up what I felt like coming back from my summer in Canada….naked and homeless. 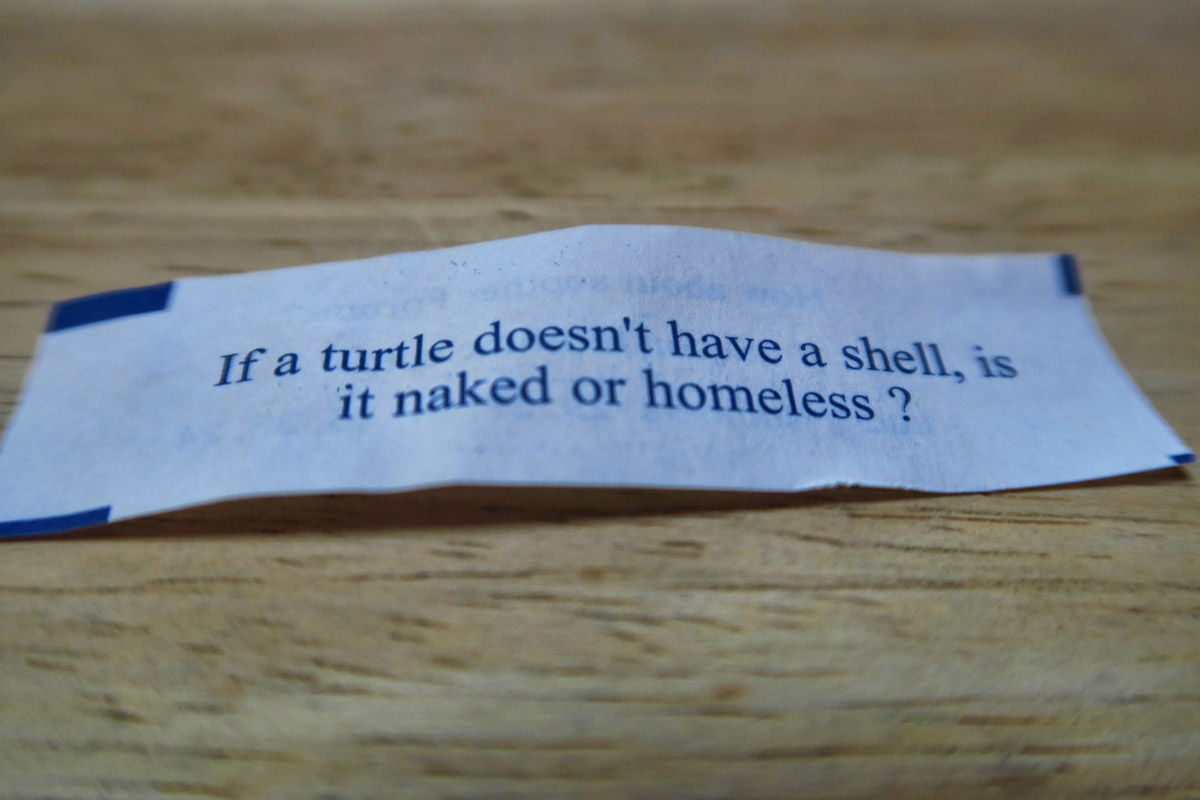 I met so many nice people traveling around Atlantic Canada, many of them full timers.   But as the end of August drew near, conversations turned toward “going home,”  much more so than with other destinations I have visited.  Typically, questions asked among full timers are more about “Where to next?”  But somehow, being on an island in a country other than our own, a sense of “homeward bound” was palpable. For the first time in four years, I felt a tinge of melancholy that there really was no “going home.” 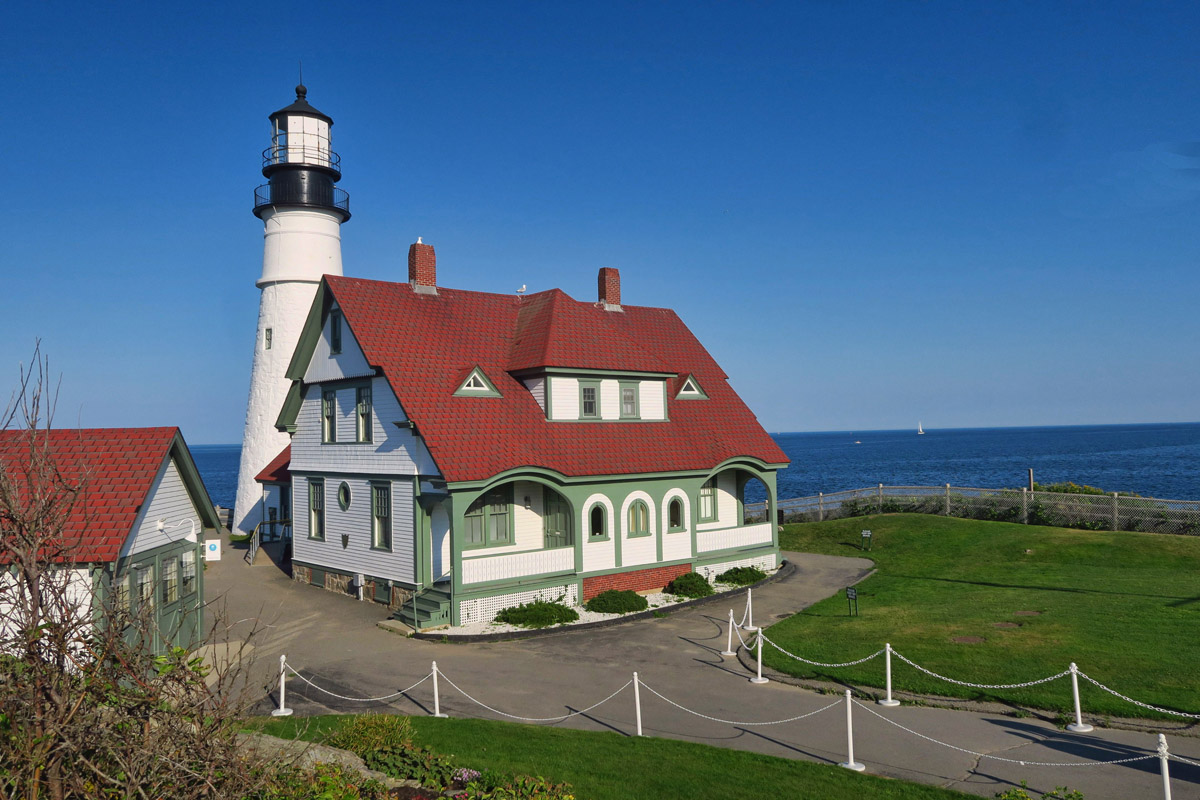 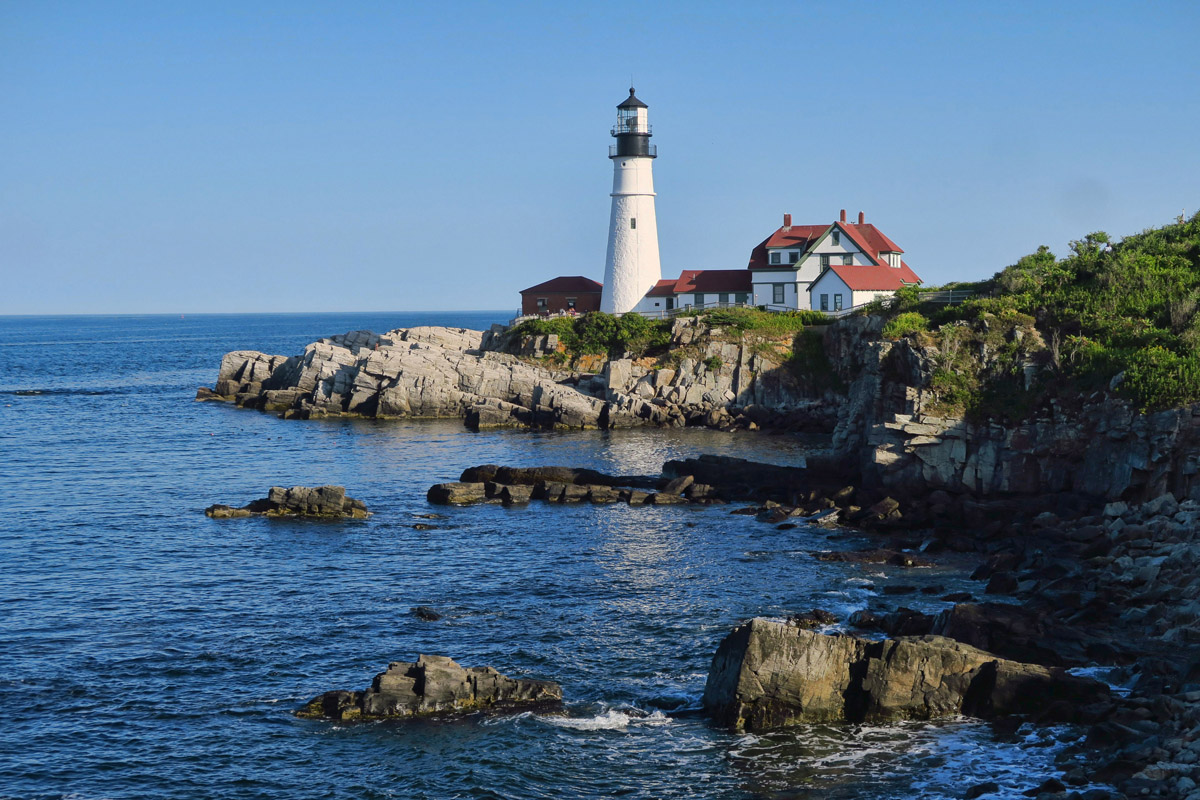 The lighthouse was first lit in January of 1791. 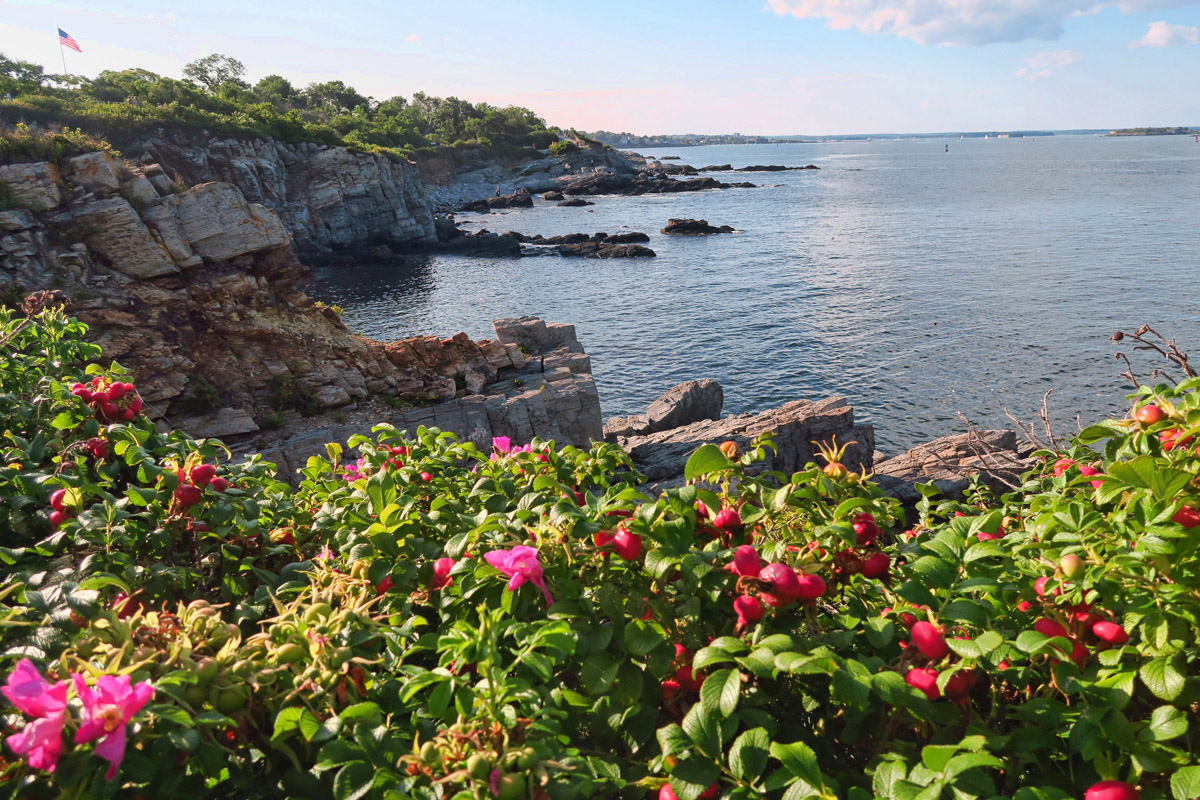 The lighthouse is located in Fort Williams Park, just south of downtown Portland. 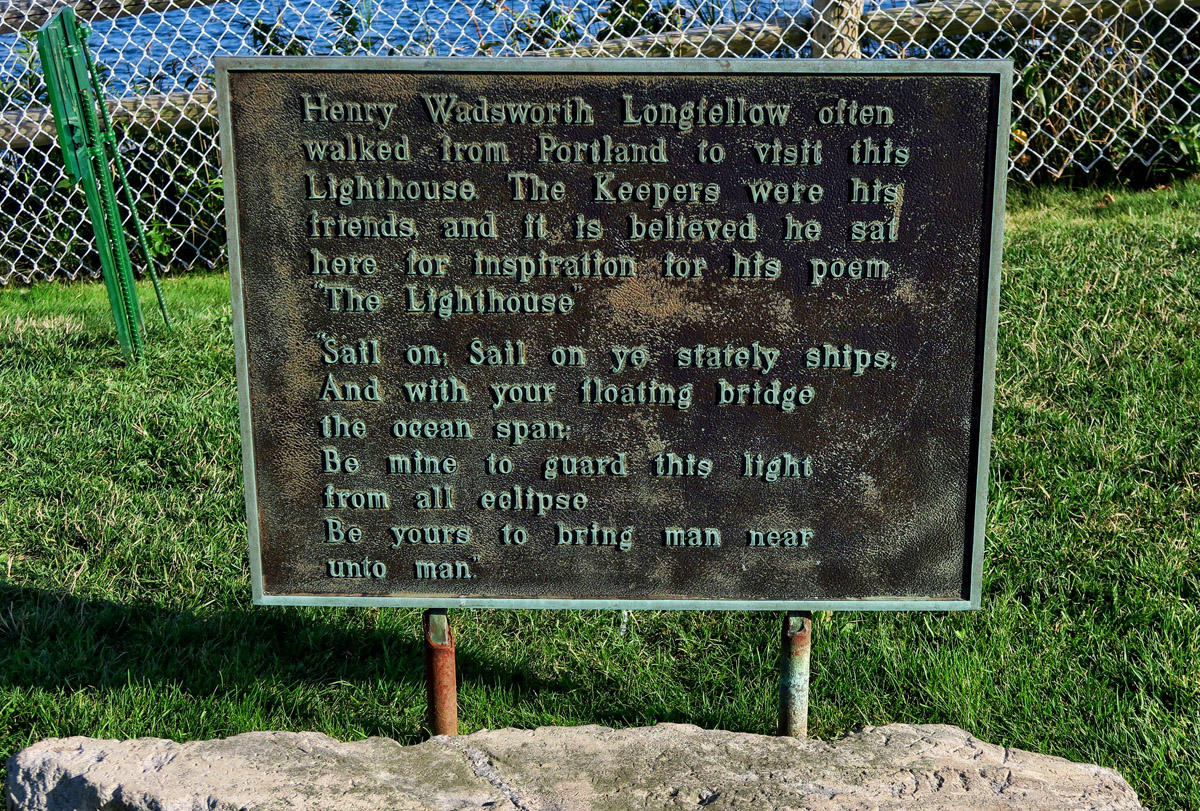 Gotta love a Longfellow poem about a lighthouse! 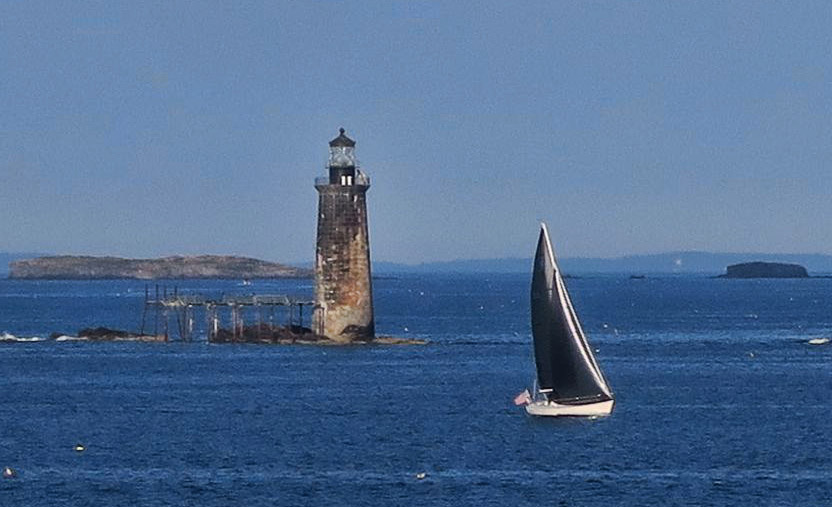 Not that I want to get off the road by any stretch, but just the concept of answering day after day, “Where are you from?” or “Where is home?”  serves as a constant reminder.  I always struggle when answering that question, as I don’t really have one.   Oh, sure, I can recite all the bumper sticker slogans, “Home is where you park it.”    But I really have no place to which I feel allegiance.  It’s certainly not Texas.  I left there as soon as I could. (Apologies to Mom, but she was the first to know.)  It’s not Manhattan.  Though it felt like home for the ten years I lived there, it belongs to the screen-enslaved, zombie-eyed, app-tapping millennials now.  Besides, I can barely afford to visit there, much less live there again.  And though I lived in Atlanta for eight years, it never felt like much more than a job relocation.

So where is “home?”   I must dig deep and test my own resolve in saying there really, truly is none. If I were to identify with any part of the US, it would have to be the Great Southwest.  But geez, that seems so very far away.  Being so far up the northeast corner of the US, it feels like I’ve climbed up into a tree and can’t figure out how to get back down. 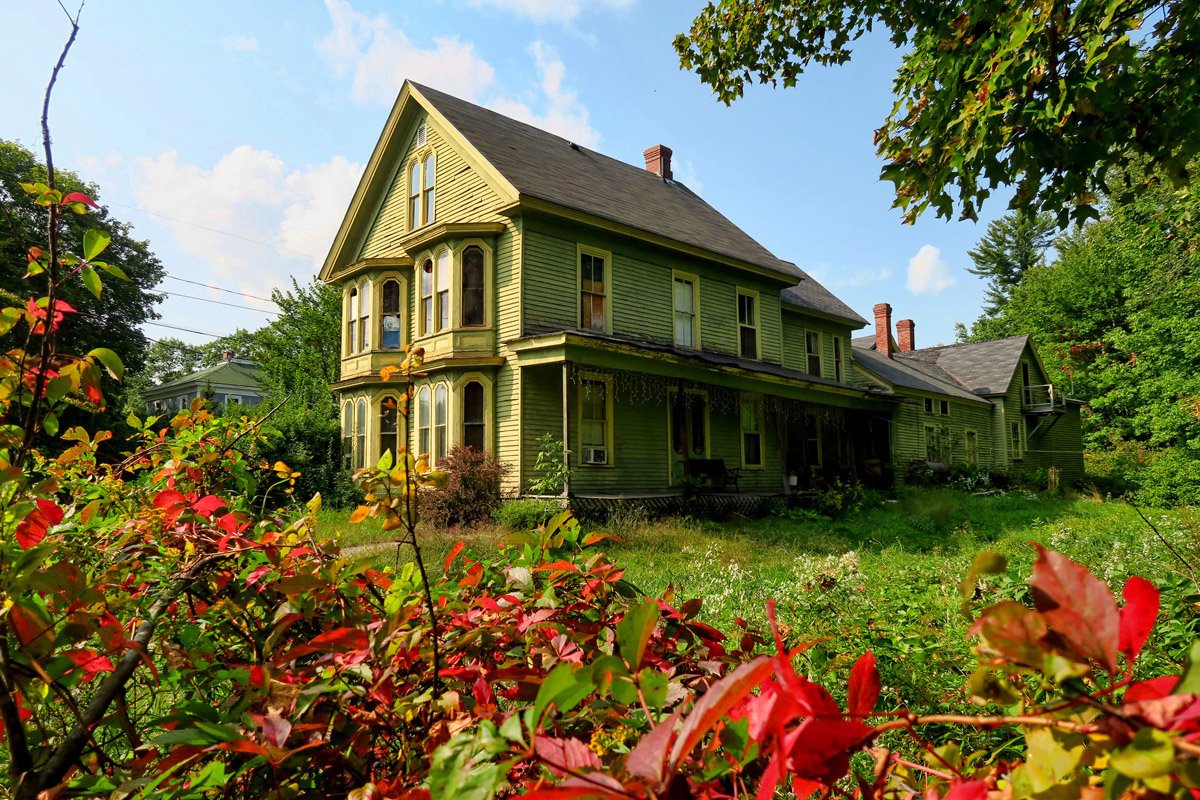 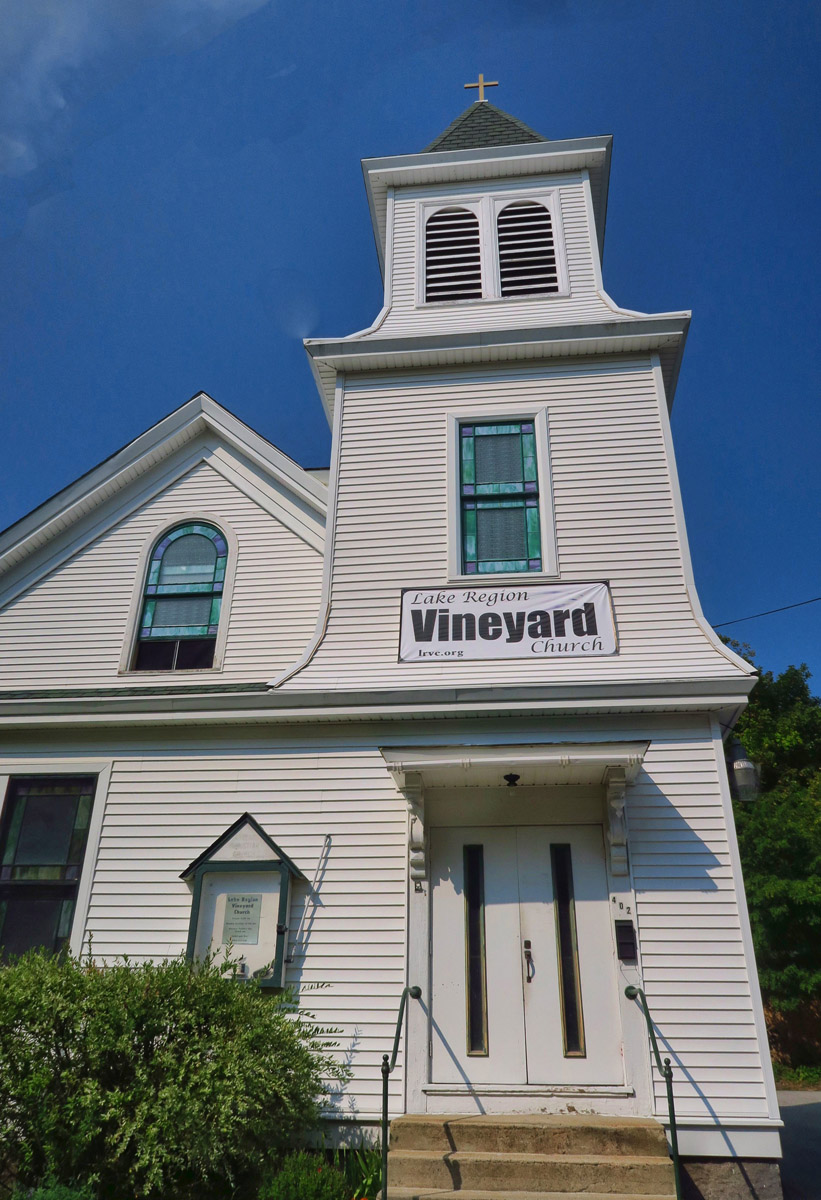 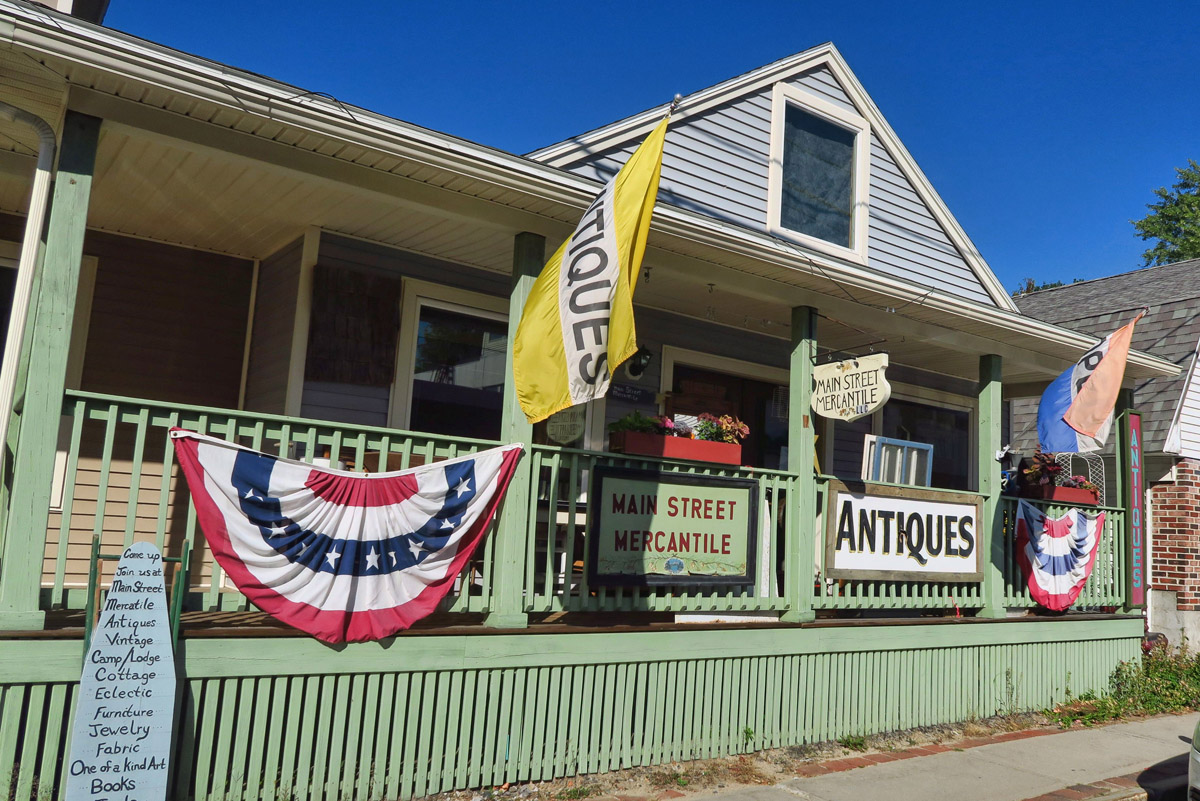 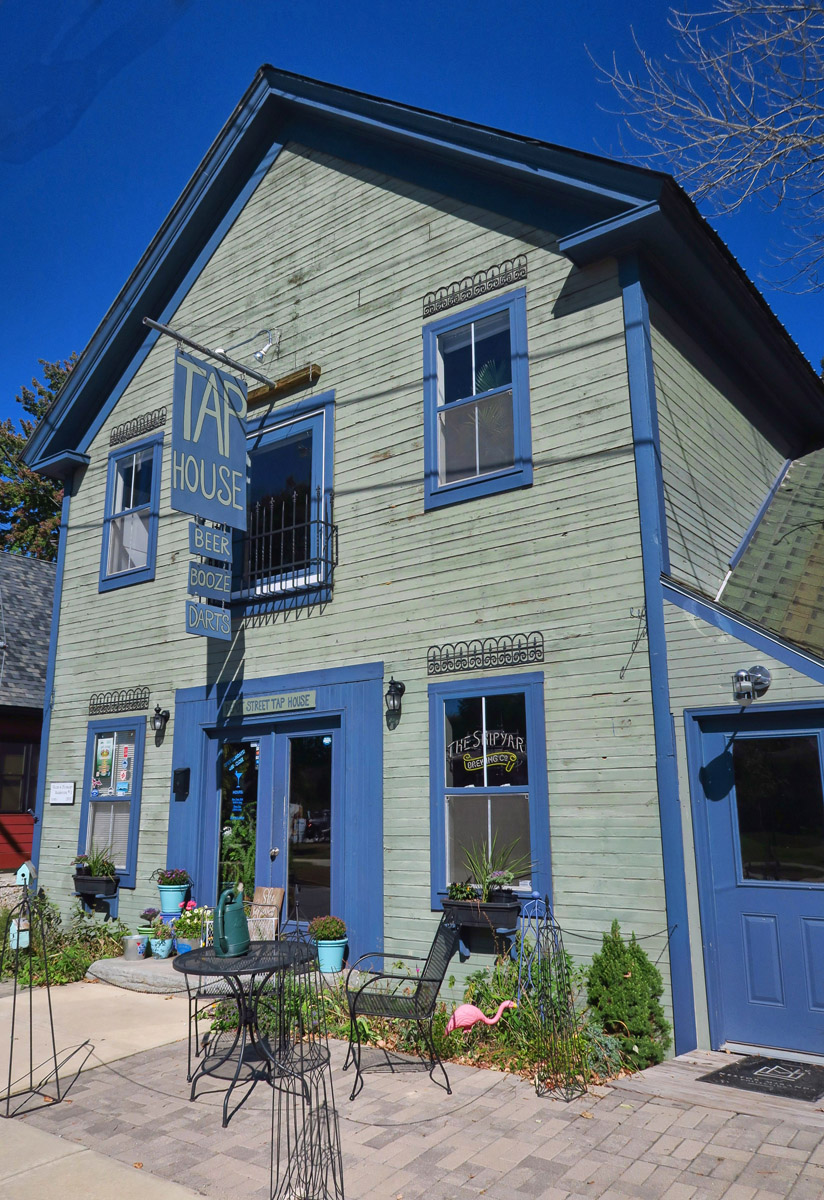 This is Carrye’s “Tap House,” but don’t let the name fool you…she is a master mixologist! The sign leaning against the front door says “She believed she could, so she did.” 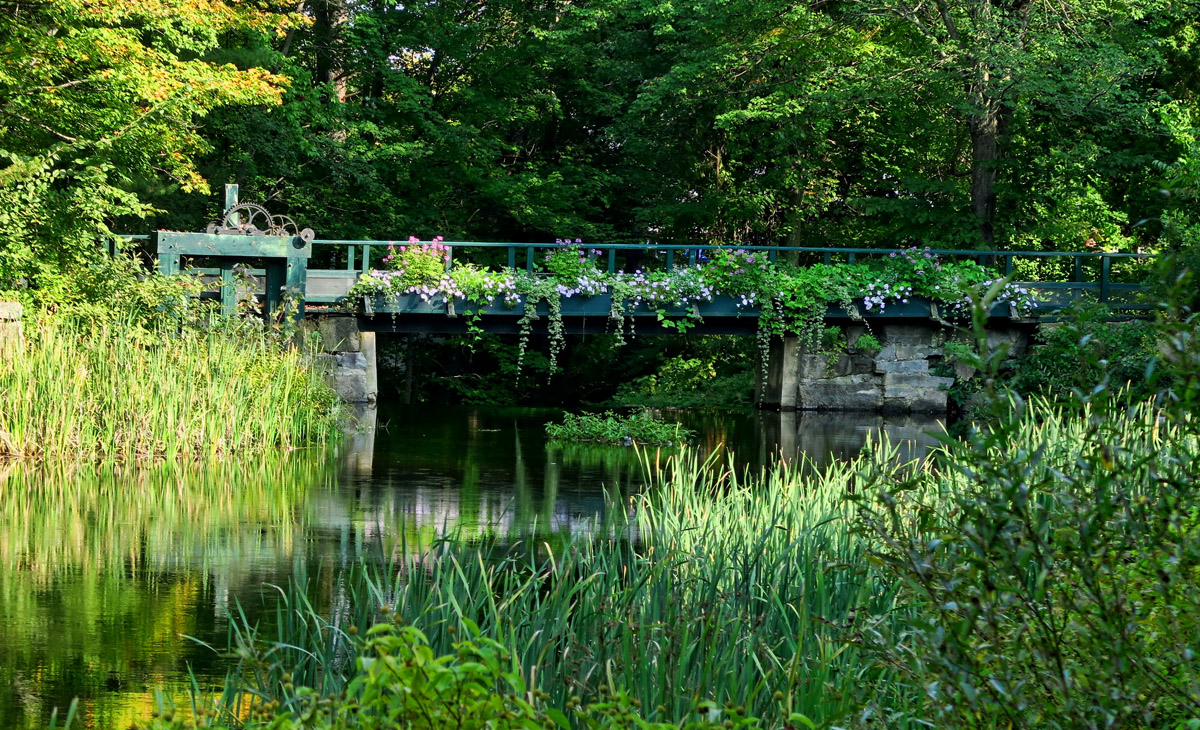 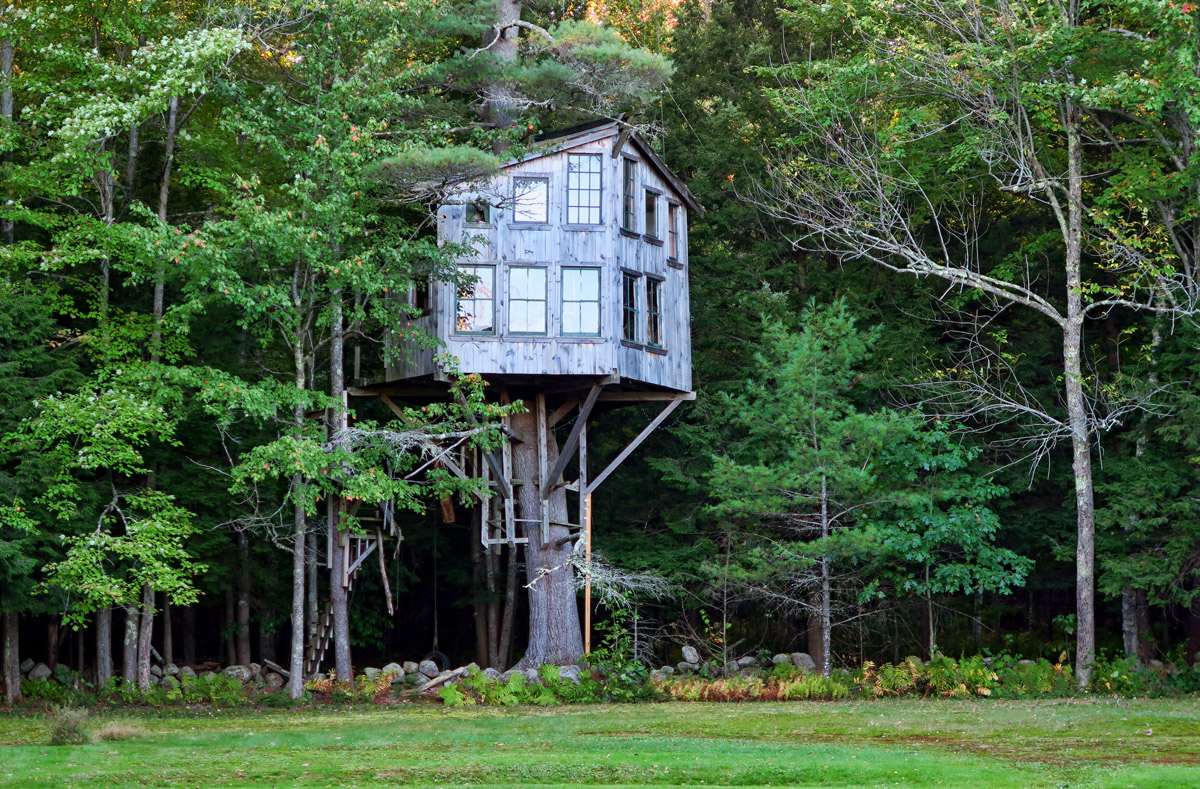 My friend John Wells directed me to this beautiful treehouse, built on his former property. The house was featured as an “Extreme Treehouse” in Popular Mechanics. 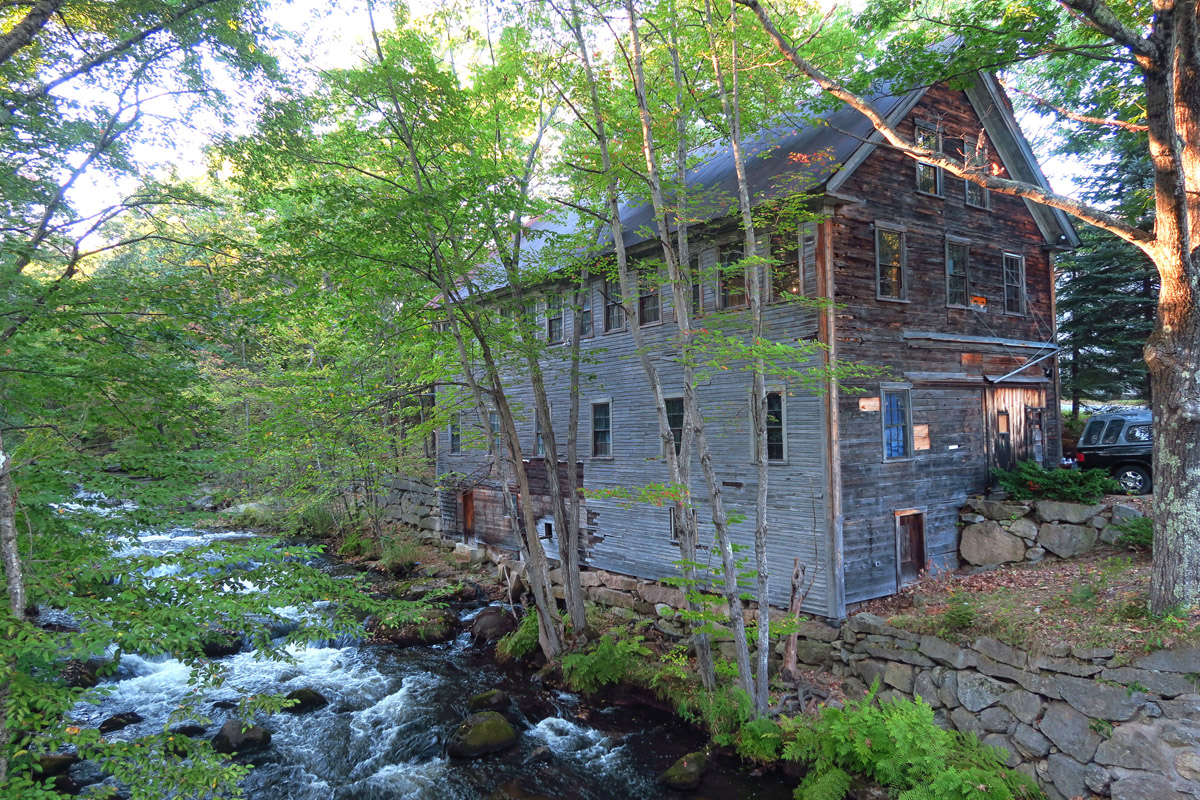 Bridgton was once a thriving mill town, and evidence of this can be seen along Stevens Brook.

But still, it would be nice to have a place to just rest for a while.   I have driven every single day (with the exception of two days) since I crossed the Canadian border two months ago, and I am feeling weary.  I remember having this same feeling when I did my round-the-world jaunt back in 2002.  After being on the go for months, all I wanted was a place to stop and rest for a few days.  To restore some normalcy to my routine.  Toward the end of my journey, my friend Nancy offered up her work apartment just outside of Paris.  Here I was in the most famous city in the world, yet all I wanted to do was hole up on the couch and binge-watch the CNN loop for days. 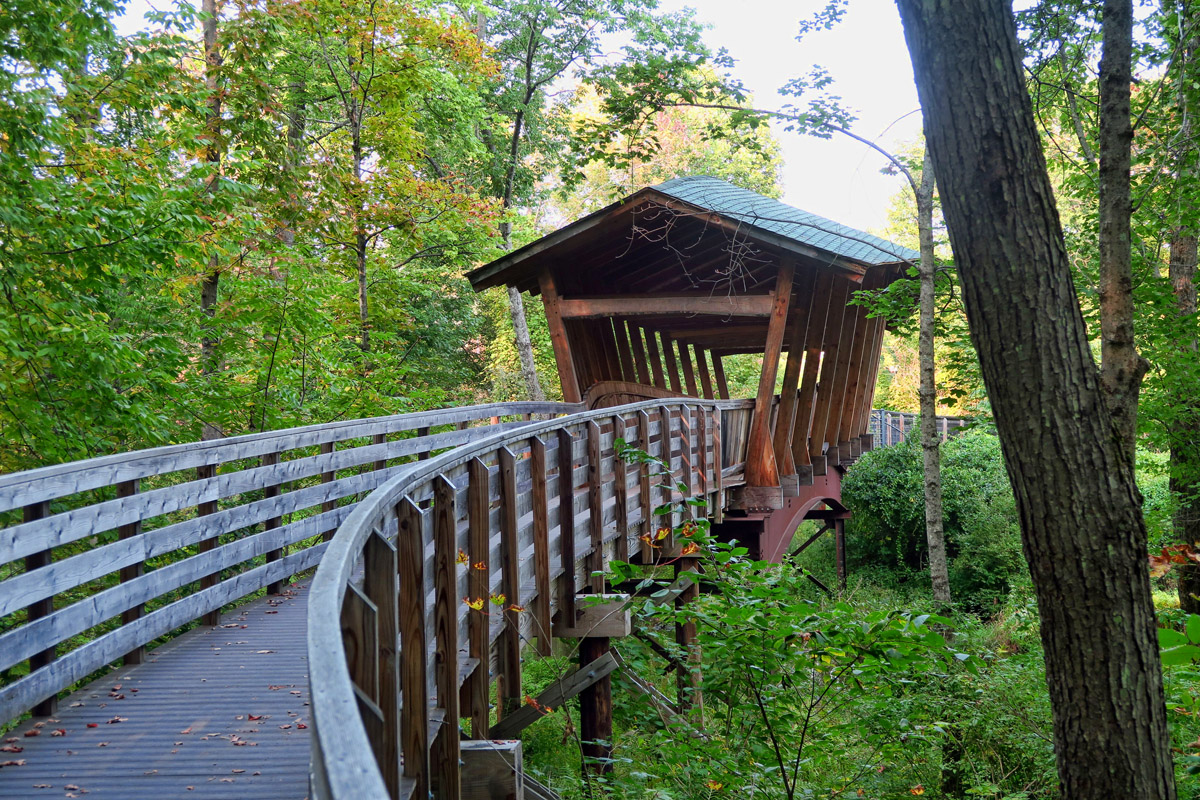 Bridgton has some beautiful trails, this one my favorite through Pondicherry Park. 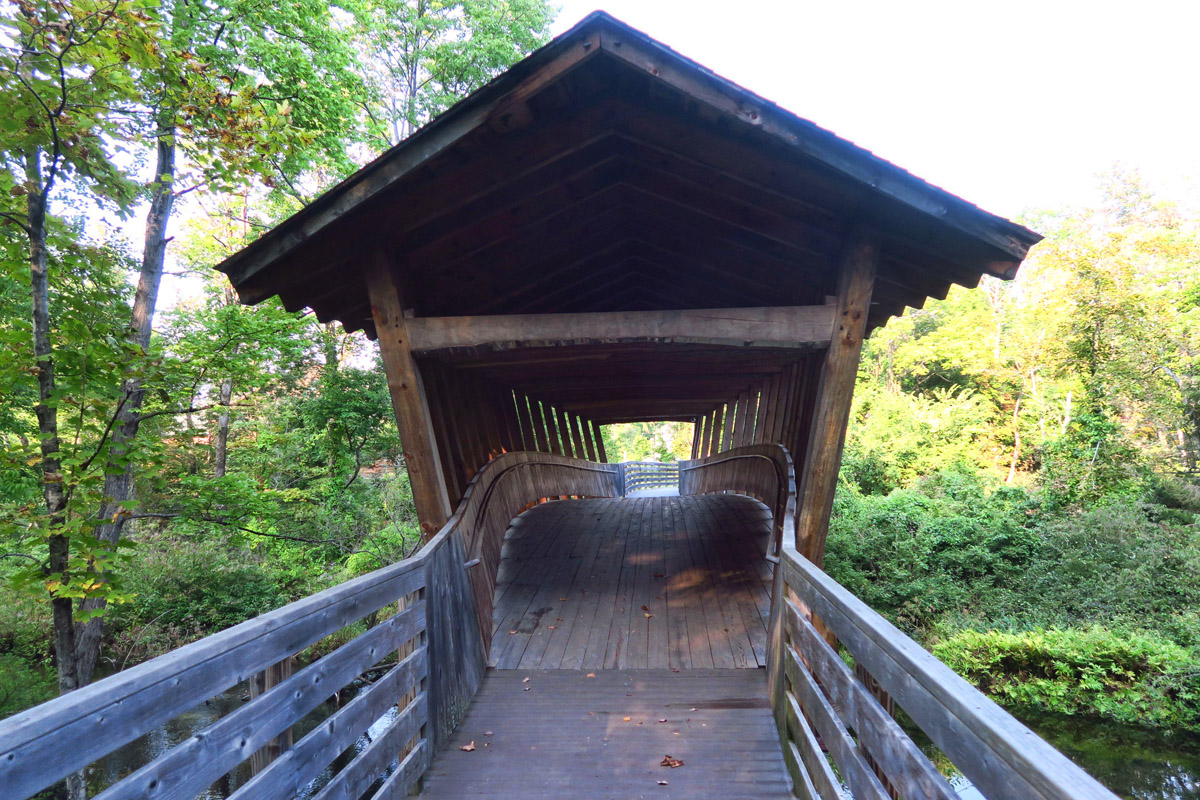 This bridge leads from Main Street into the 66 acre reserve. 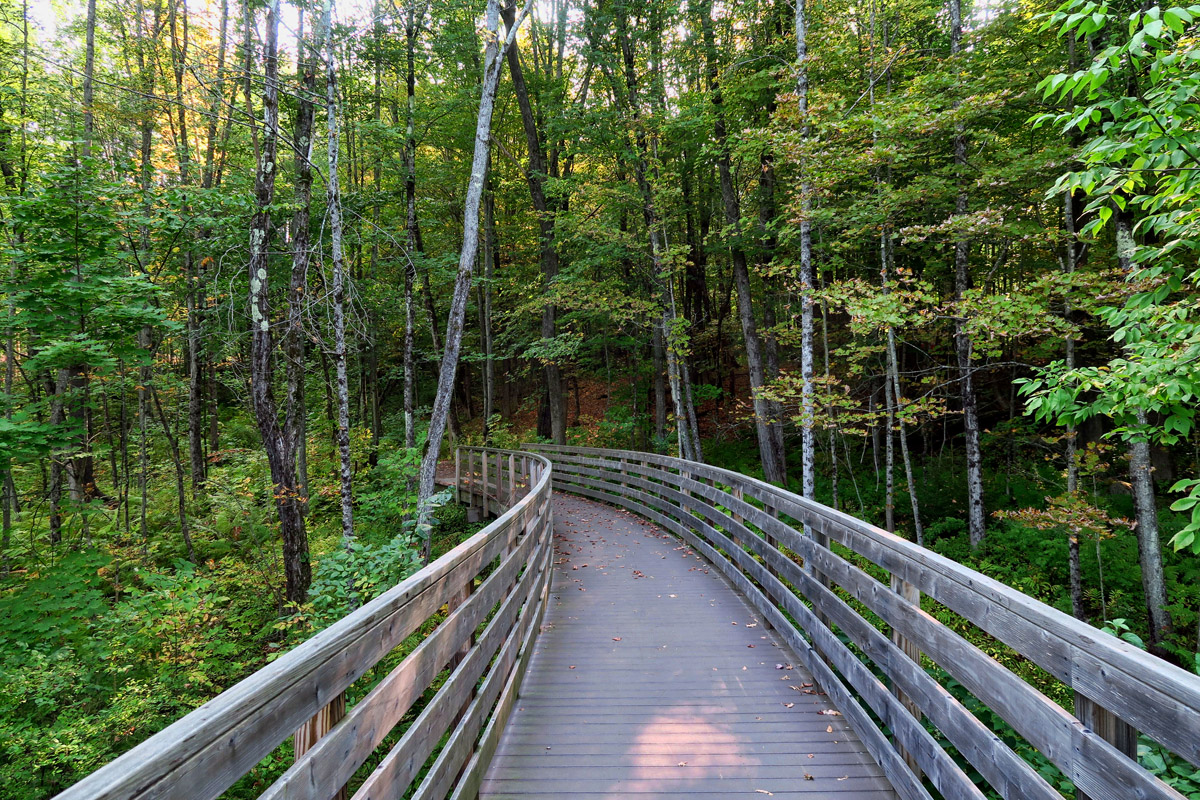 A great place to meander on my daily walks…. 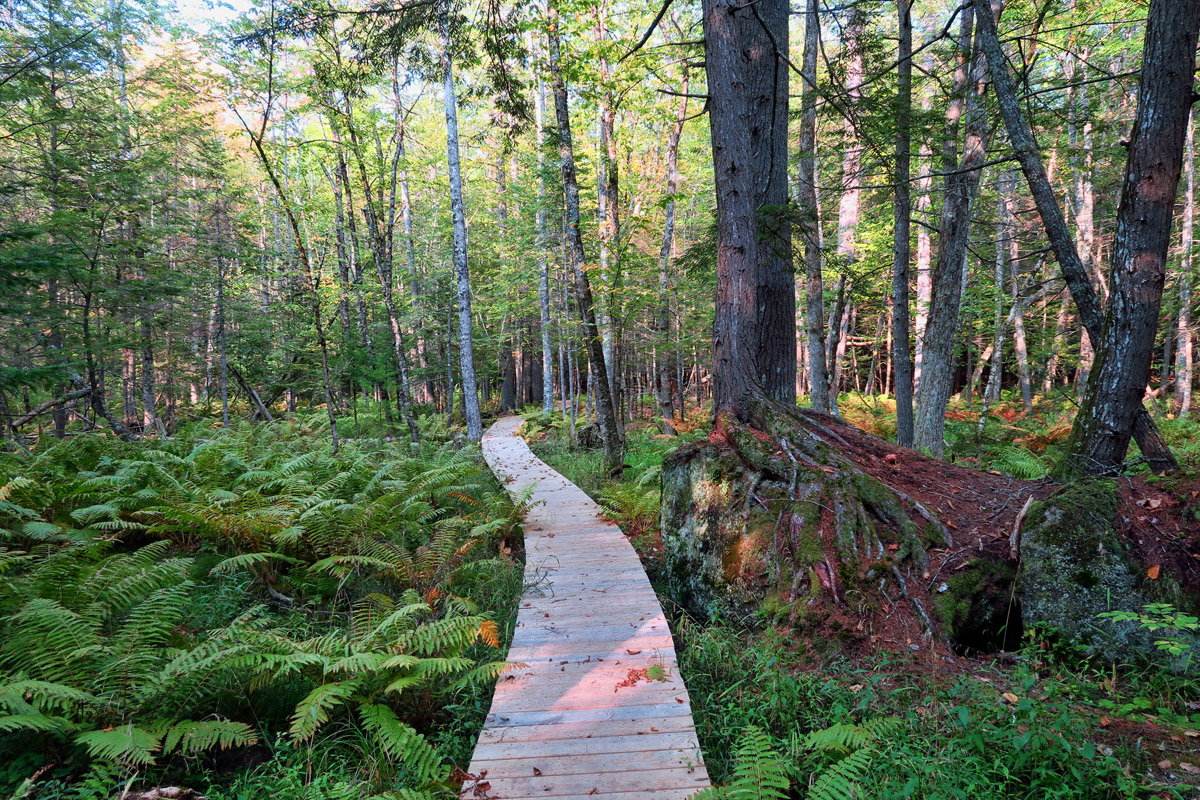 My reason for leaving Canada when I did was due to a commitment to meet some dear friends for an end of summer reunion.   We would meet up at my friend Deb’s family cabin on Long Lake in western Maine.   As we sat around drinking wine one night, the subject of “Where are you headed next?” came up, for which my answer was “I have no idea, but I hope to emerge from this weekend, soaking my brain in wine and my feet in the lake, with some clarity.”   To this, Deb replied, “Why don’t you just stay here?  The rental season is done for the year, and you can have the place all to yourself.”

As far as temporary places to call home go, I couldn’t ask for a better one… 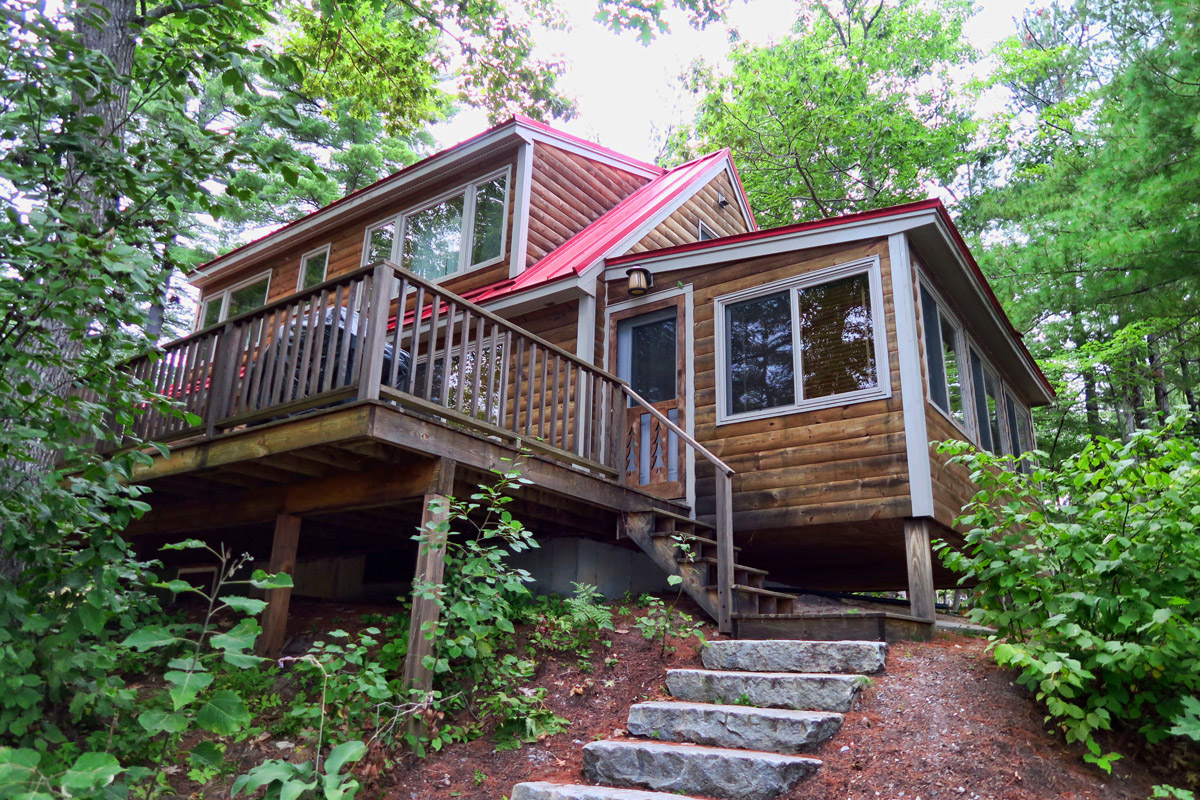 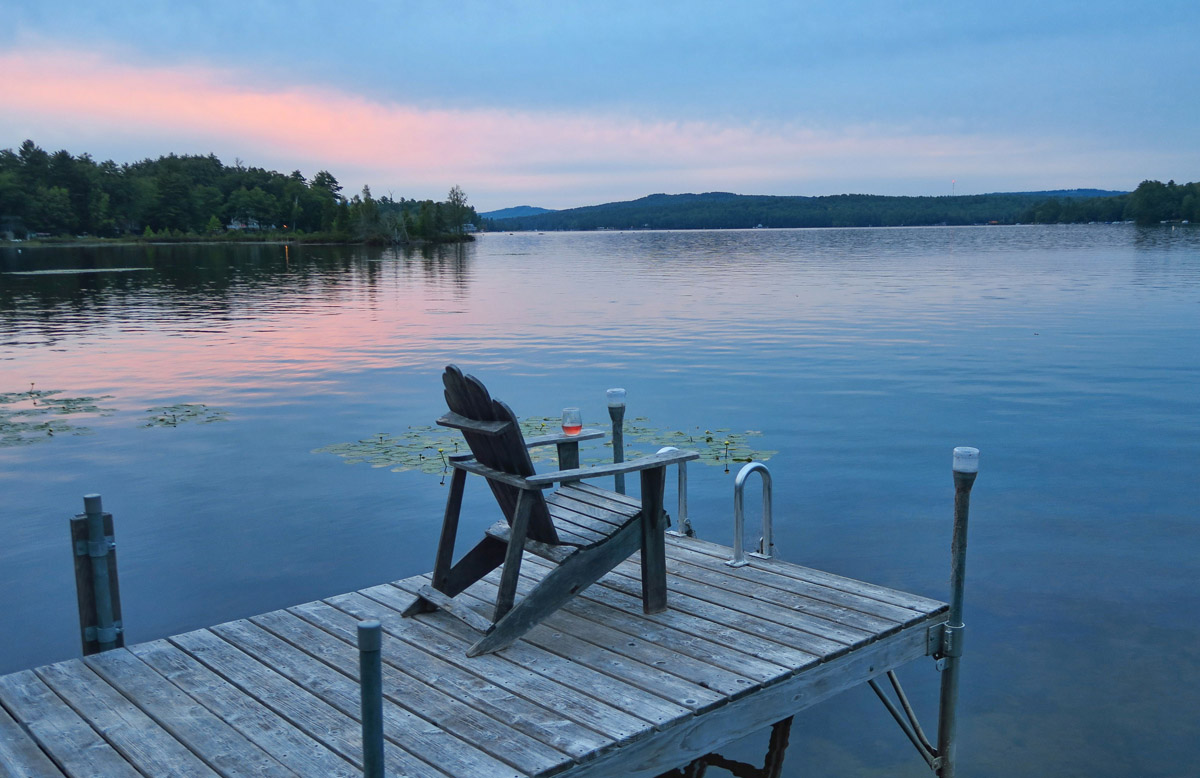 Favorite end of day at the end of the dock. 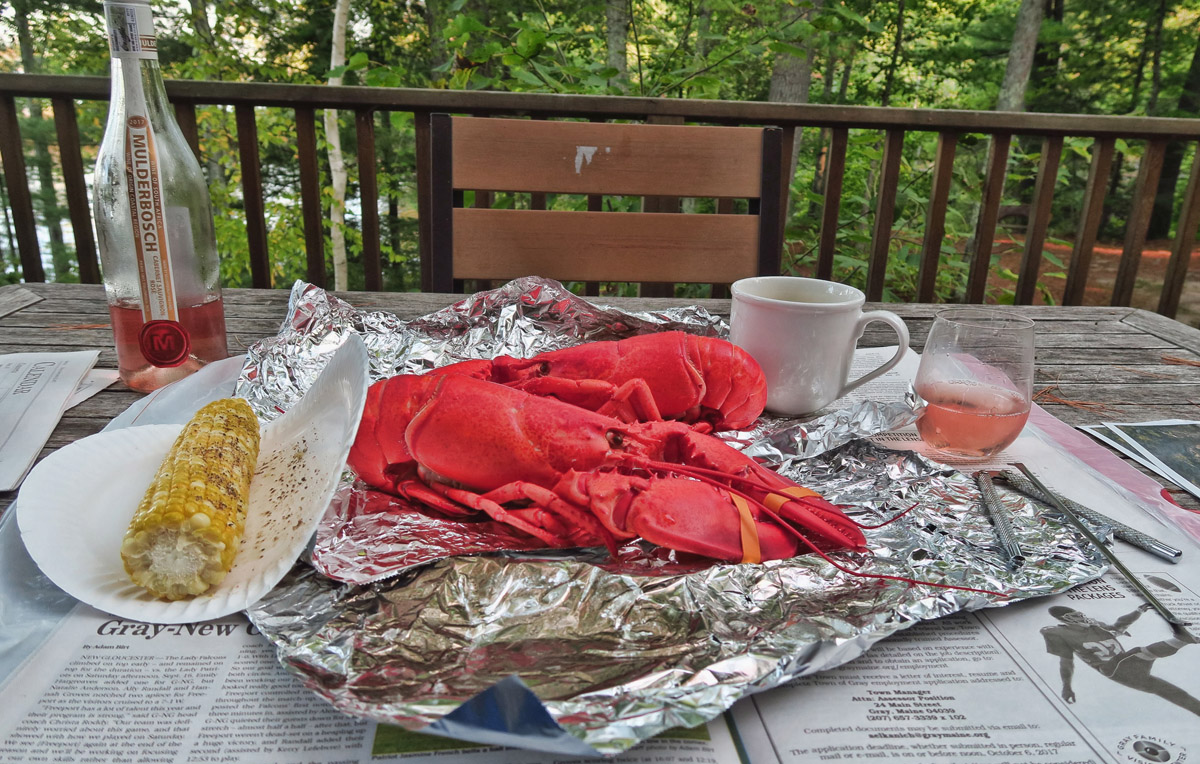 It is Maine, after all…. 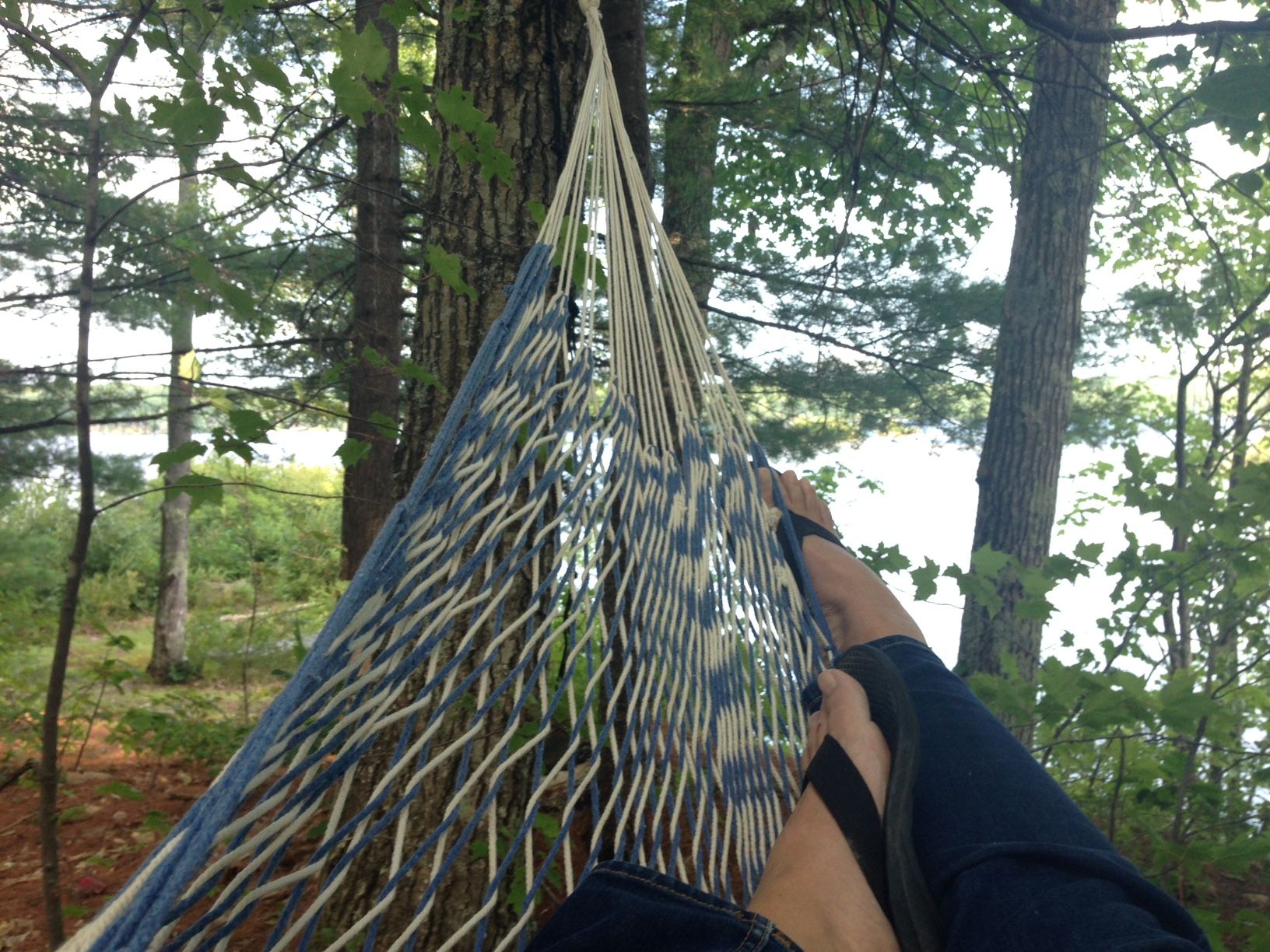 I found the perfect spot for my hammock in the trees alongside the boat ramp. 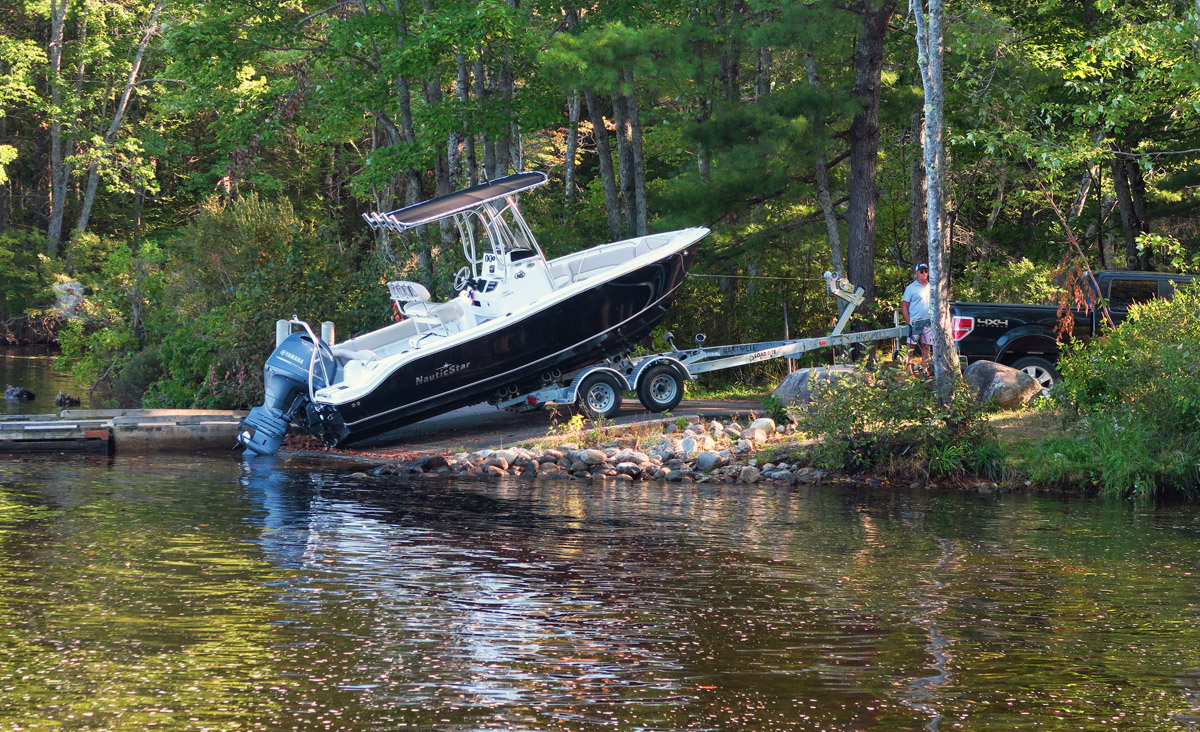 My hammock allowed for some great people watching. The sound of this boat ejecting it’s trailer prematurely and crashing onto the pavement was eclipsed only by the screaming of the wife. 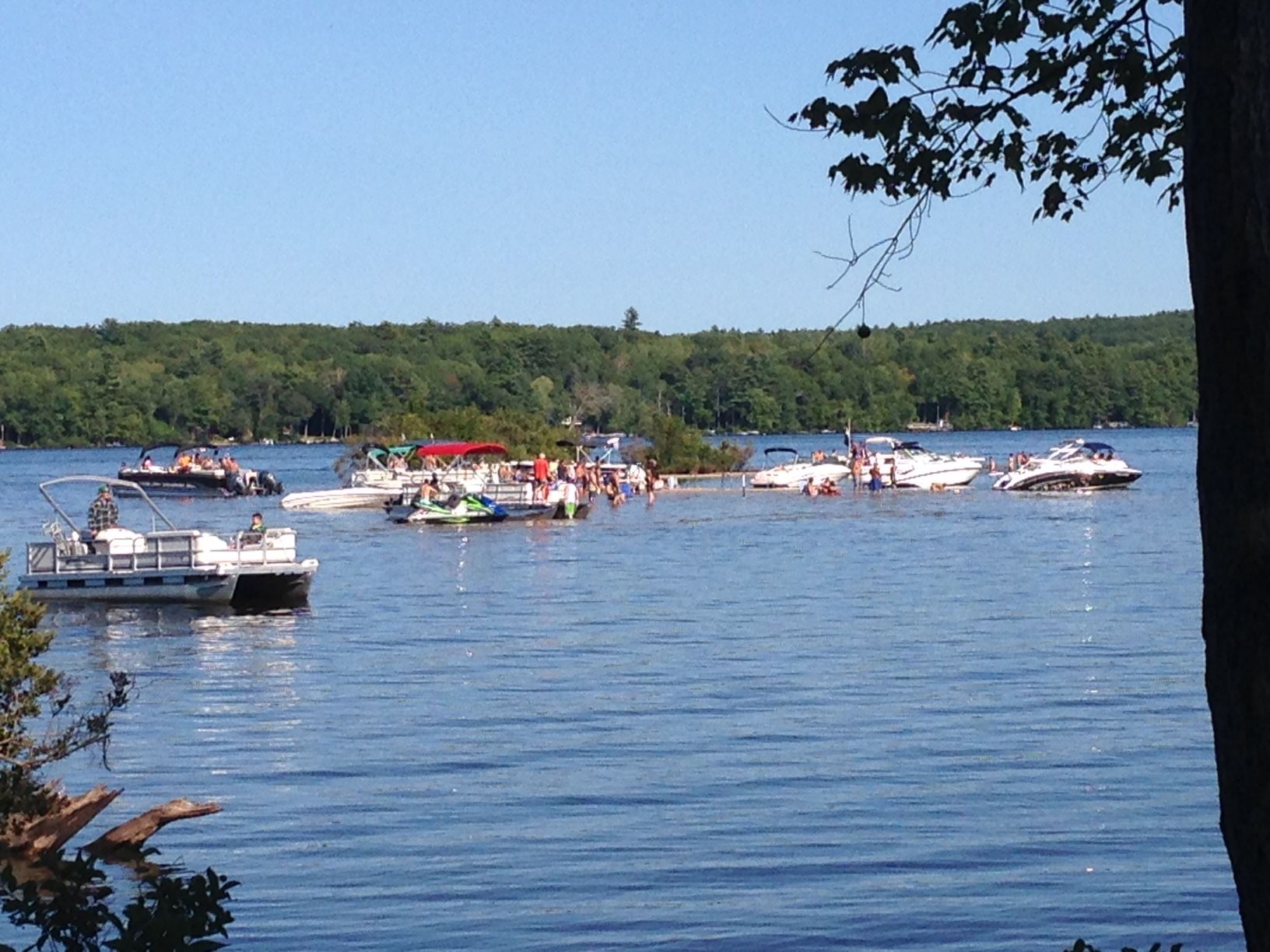 Partiers out on the sand bar. No wonder the loons are alarmed!

It’s been a month now where I have spent my days exploring the trails and tales of local Mainers in the small town of Bridgton, Maine.  Evenings are typically spent on the dock where I sit in the Adirondack chairs, watching the clouds light up from brilliant fuchsia to soft pink to dusky lavender as the sun sets behind me.

Sitting here, I strain to listen for the mournful cry of the loons.  I had never heard one before this time on Long Lake, and now I’m enchanted. Their sounds are so engagingly haunting.  I love knowing what each call means….the eerie wail to signal a loved one that makes me think of the call of a lone wolf.  The alarming tremolo that signals potential danger.  Or the individual signature yodel of each male, his territorial claim.

But how do they compete over the cacophony of human noise?  I am on the shallow side of the lake, thankfully, so the boat traffic lane is across the lake.  But still I can hear motorcycles roaring along the roadside, jetskis racing each other, and motorboats with no doubt intoxicated drivers, exhibiting their own brand of territorial yodel, like Tarzan hopped up on testosterone.  Does yelling really enhance their experience?

We live in such a noisy world that one doesn’t really realize just how much ambient noise is out there until they stop to listen.  The loons seem so civilized, while we are the “wild life.”

“Listen to the voice of nature, for it holds treasures for you.” 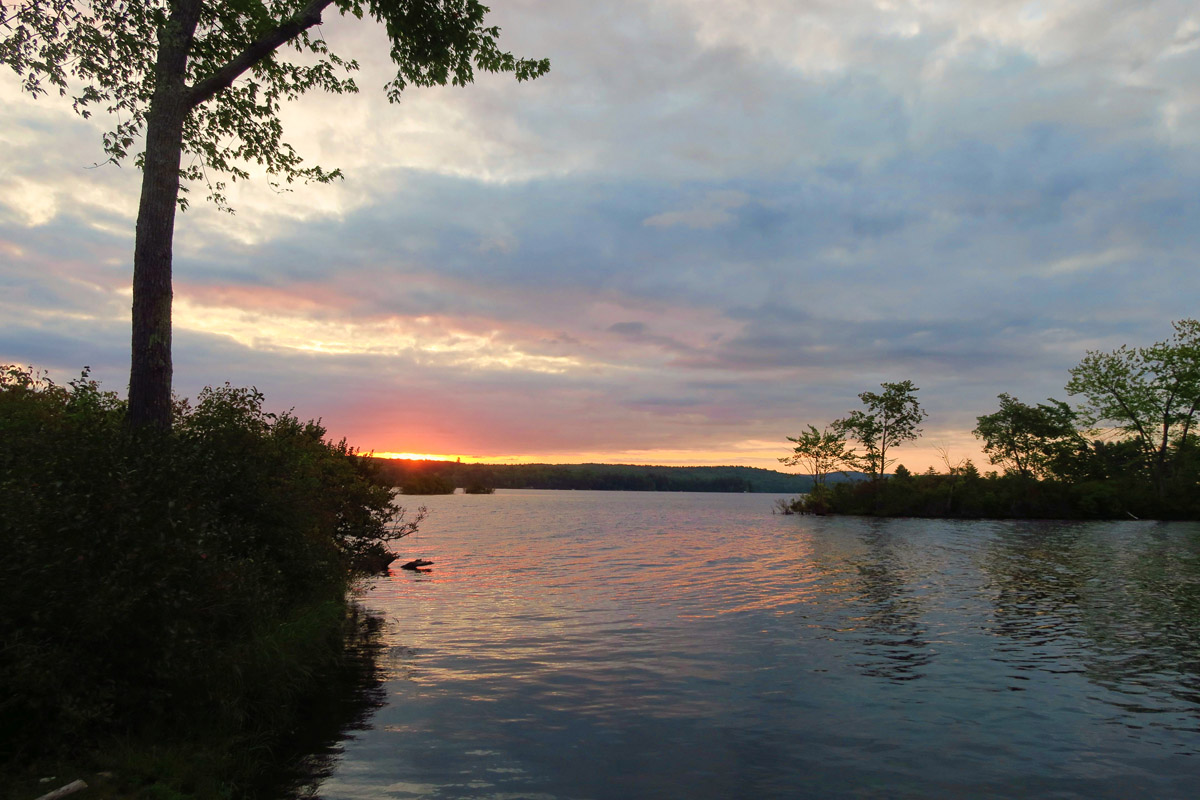 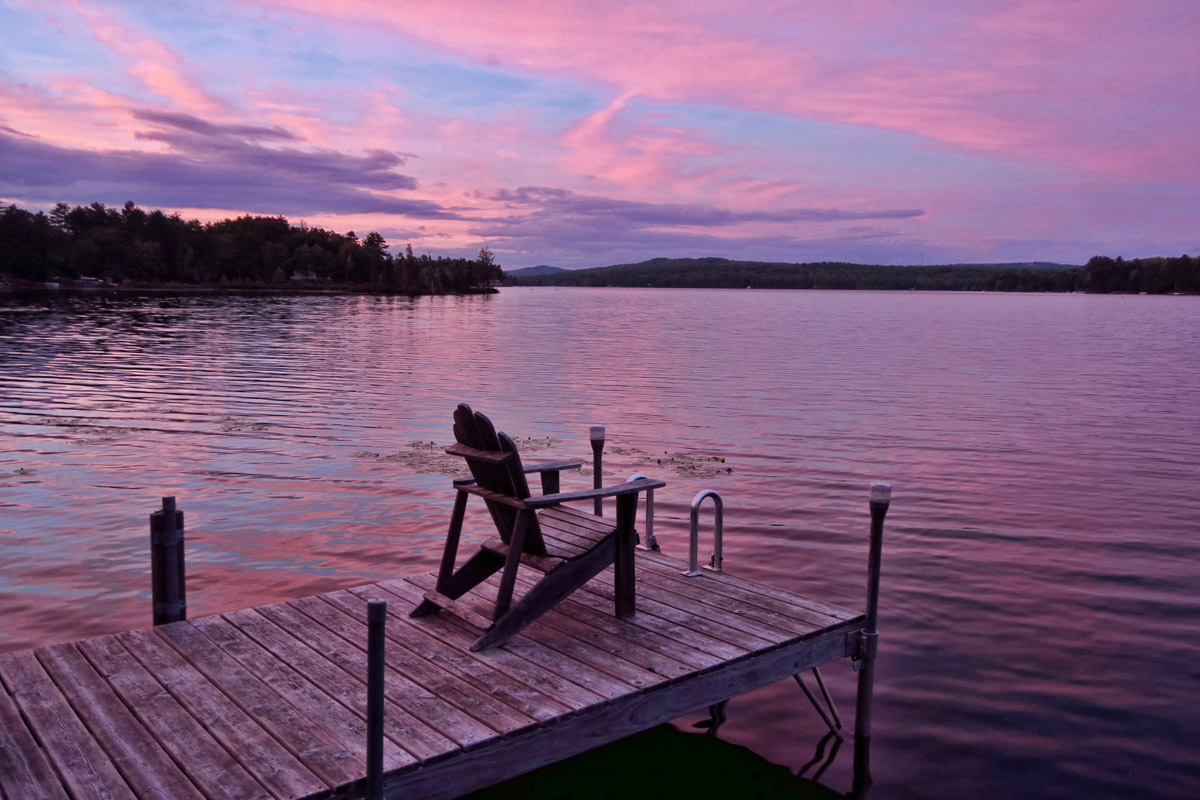 23 thoughts on “At Home with the Loons”