This is a rather unconventional blog post for an RVer, but it’s one of my favorite memories from my multiple in and out visits as I bounced back and forth across Tucson this winter.

I first heard mention of the Mini Time Machine Museum of Miniatures from photos on Pam Wright’s Facebook page. After viewing her photos, I knew I had to add this museum to my list of places to visit while in Tucson. In addition to over 500 houses and roomboxes, the museum has a temporary exhibit going on. “On Point: Sculptures on the Tips of Lead Pencils.”

Apologies for the poor photo quality. All photos were taken behind glass, which makes it impossible to avoid reflections and glare. Plus, focus is tricky shooting through a glass pane. If you want a closer look at the detail, you can click on any of the photos to enlarge. Click the browser “back” arrow to return to the post. 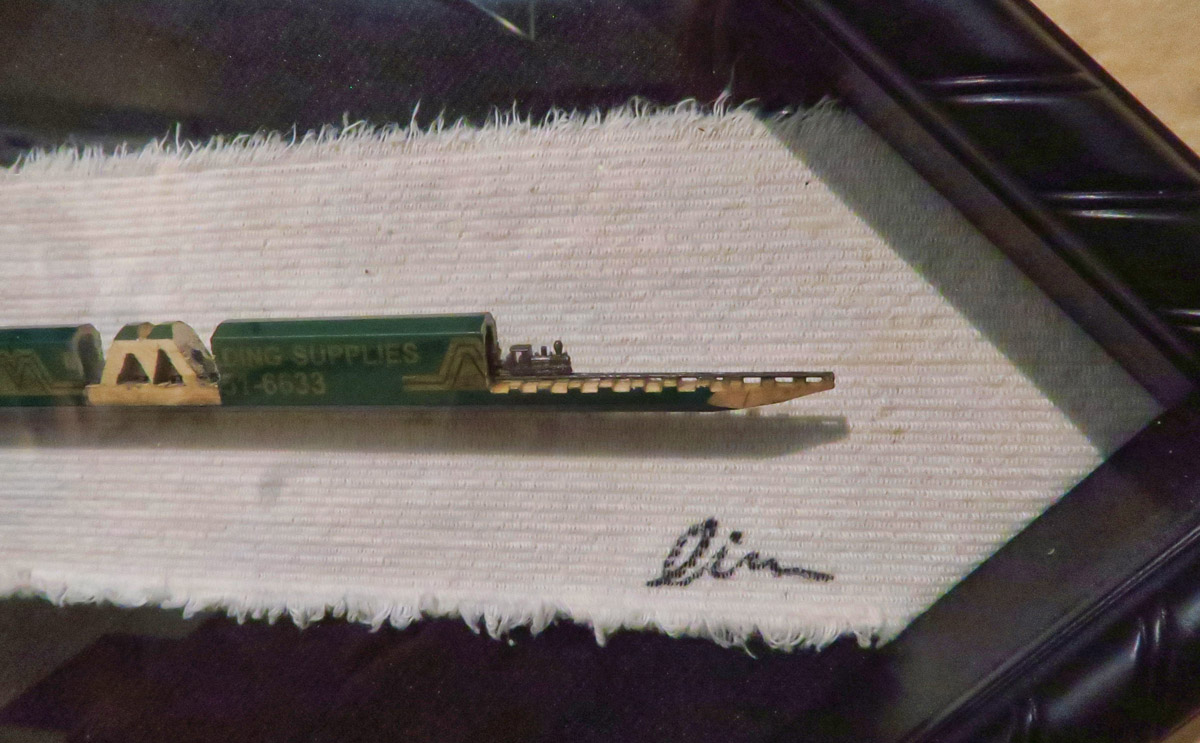 Microscopic train and trestle carved from a carpenter’s pencil. 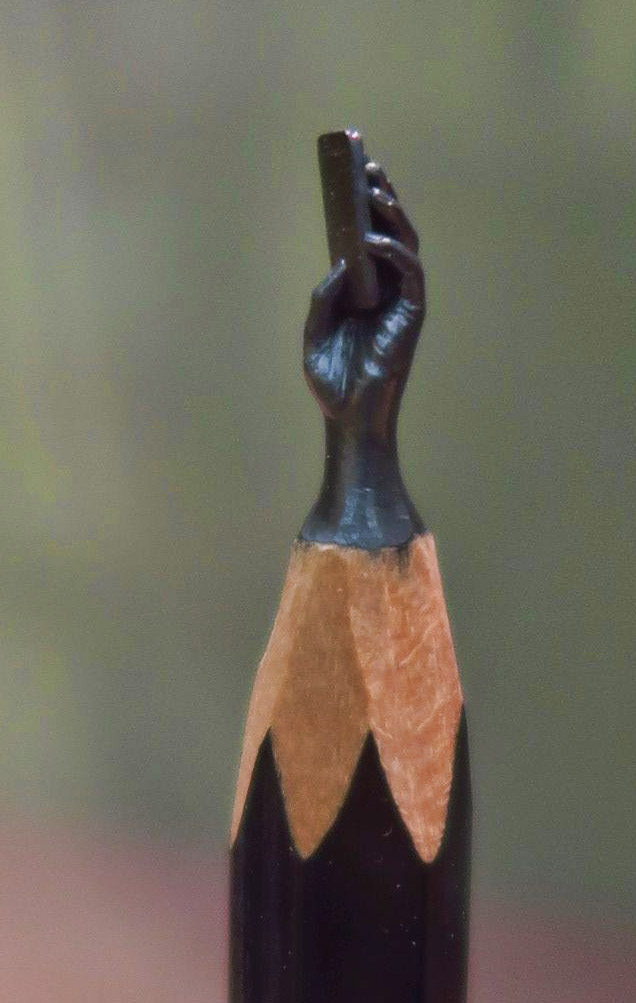 Art imitates life with this hand holding a cell phone. 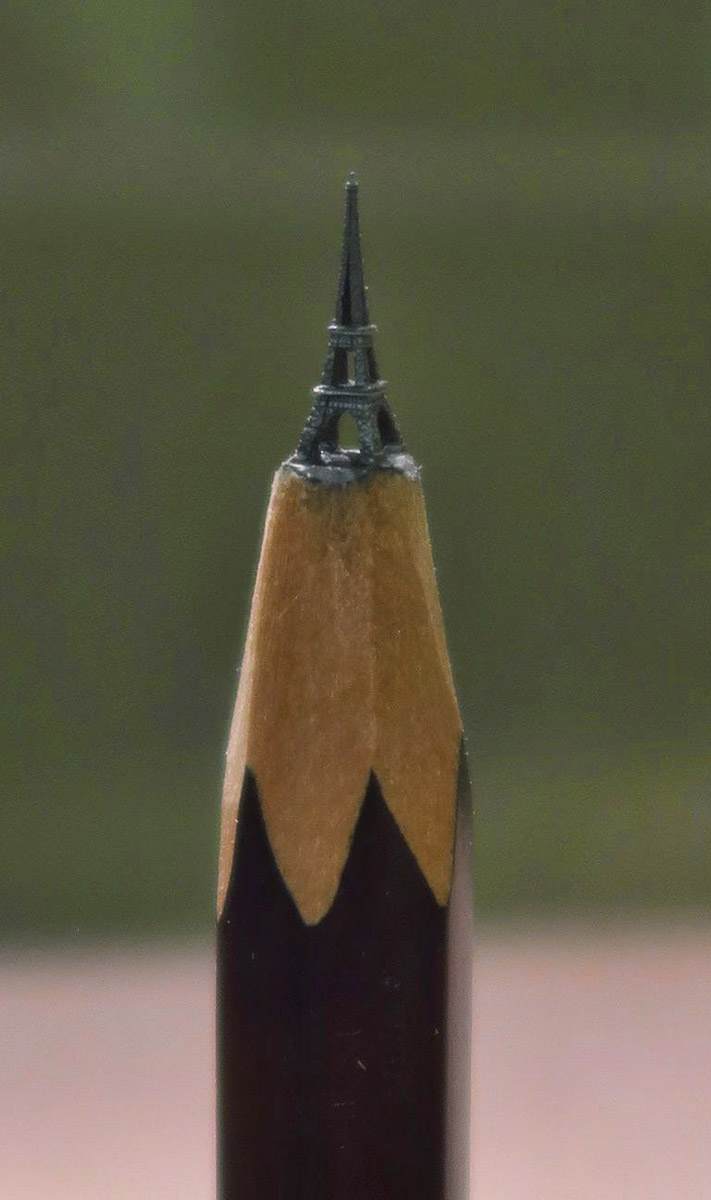 The Eiffel Tower. Typical carving tools are a razor blade, a sewing needle, and a sculpting knife.

I’ve always had a fascination with miniature versions of life-sized items. It started with my passion for Barbie, but not so much the doll itself but rather the tiny realistic, perfectly scaled accessories; shoes, handbags, gloves and hats, ice skates and BBQ tools that came with each outfit.

During my college years, that passion turned to filling every nook and cranny of my hanging wooden Printers Tray, collecting junk that would fit inside one of a hundred 1 inch cubes, from a miniature replica of the Eiffel Tower to a knitting basket made from the cap of an acorn. During my career days, it transferred to an odd fascination with miniature bottles of name-brand cosmetics and hotel shampoos as I traveled the globe. I had to stop myself from hoarding them, simply because they were so “cute.” This was my first time to find an entire museum dedicated to the art of miniature scale. 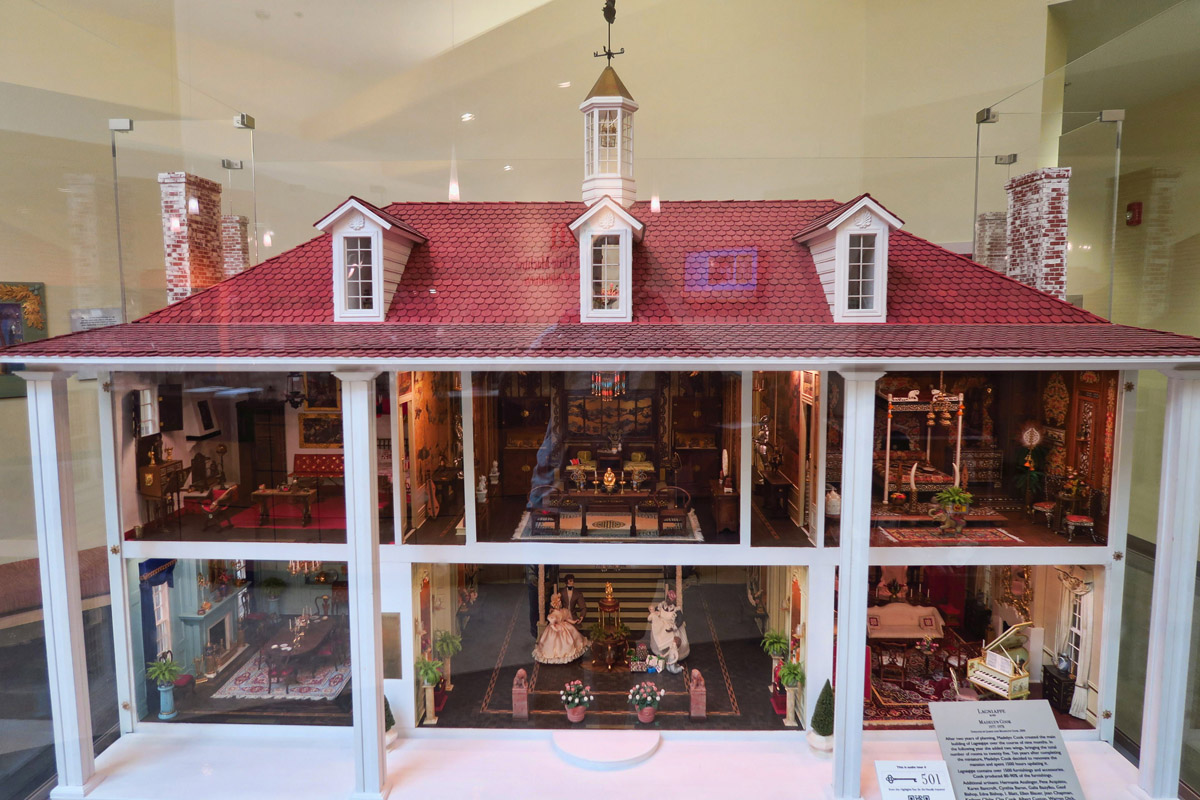 The premier piece in the entryway of the museum is an 18th Century, 25-room Virginia Plantation home called “Lagniappe,” after the word meaning “A little something extra.” Built in 1978. 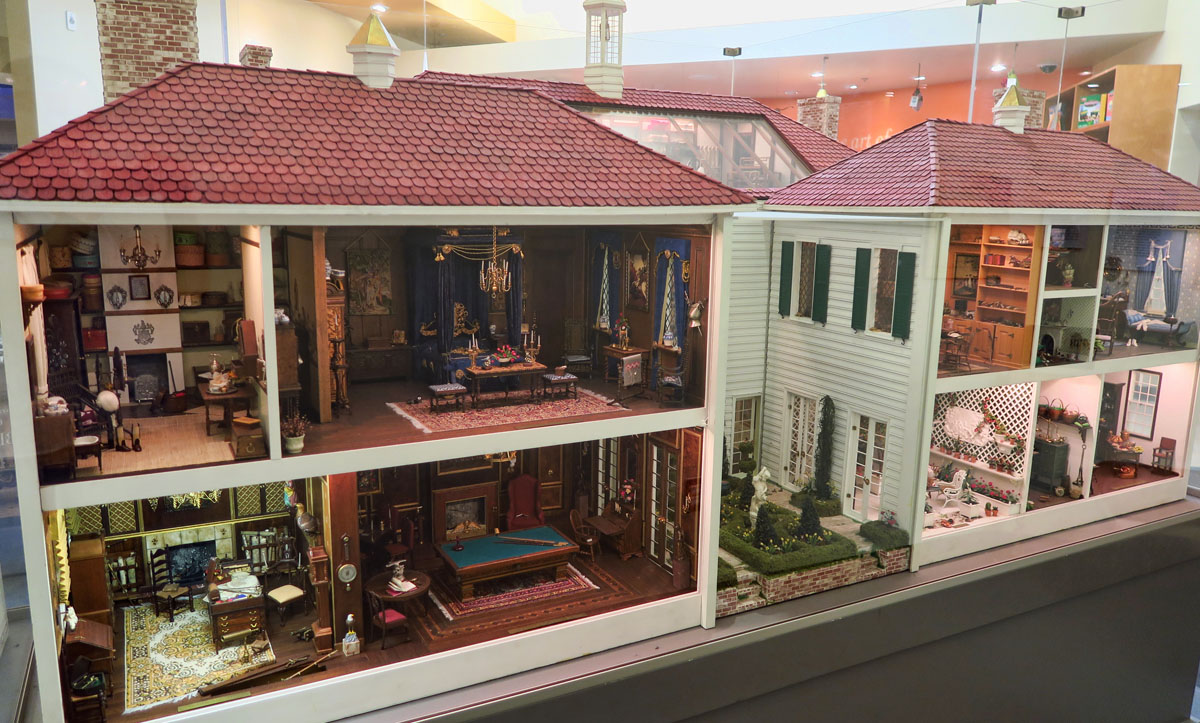 The backside of the house. Note cutaway of roof to see inside attic. 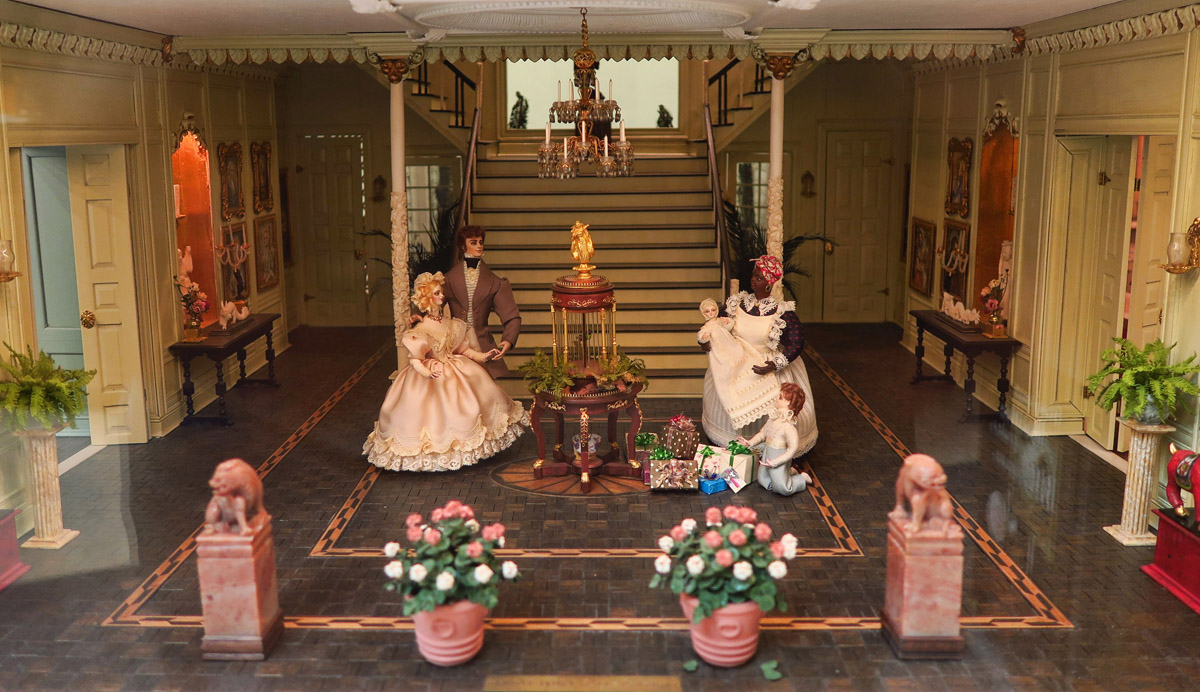 The creator of “Lagniappe,” Madelyn Cook, produced 80-90% of the furnishings herself. The foyer is the only room with people. Note the nanny, most likely a slave, holding the baby. The level of detail is incredible, from parquet flooring to recessed paneling. 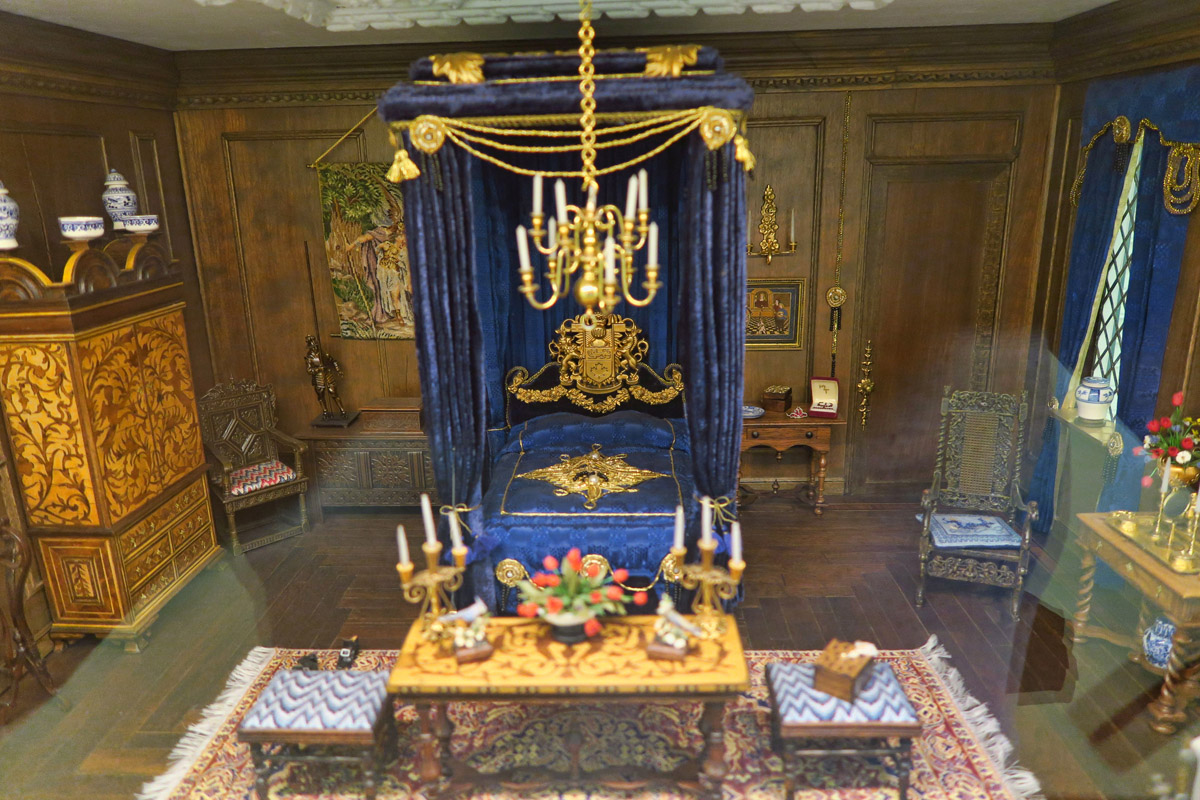 Master Bedroom with floor to ceiling velvet drapes, tapestries on the walls, and furniture with wooden inlay. 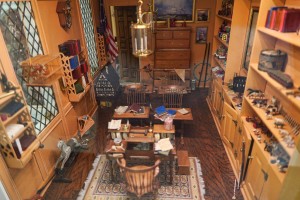 Windsor School Room for tutoring children, named after the authentically crafted Windsor chairs. Hand written assignments on paper half the size of a postage stamp. Note toy kite and rocking horse on left. 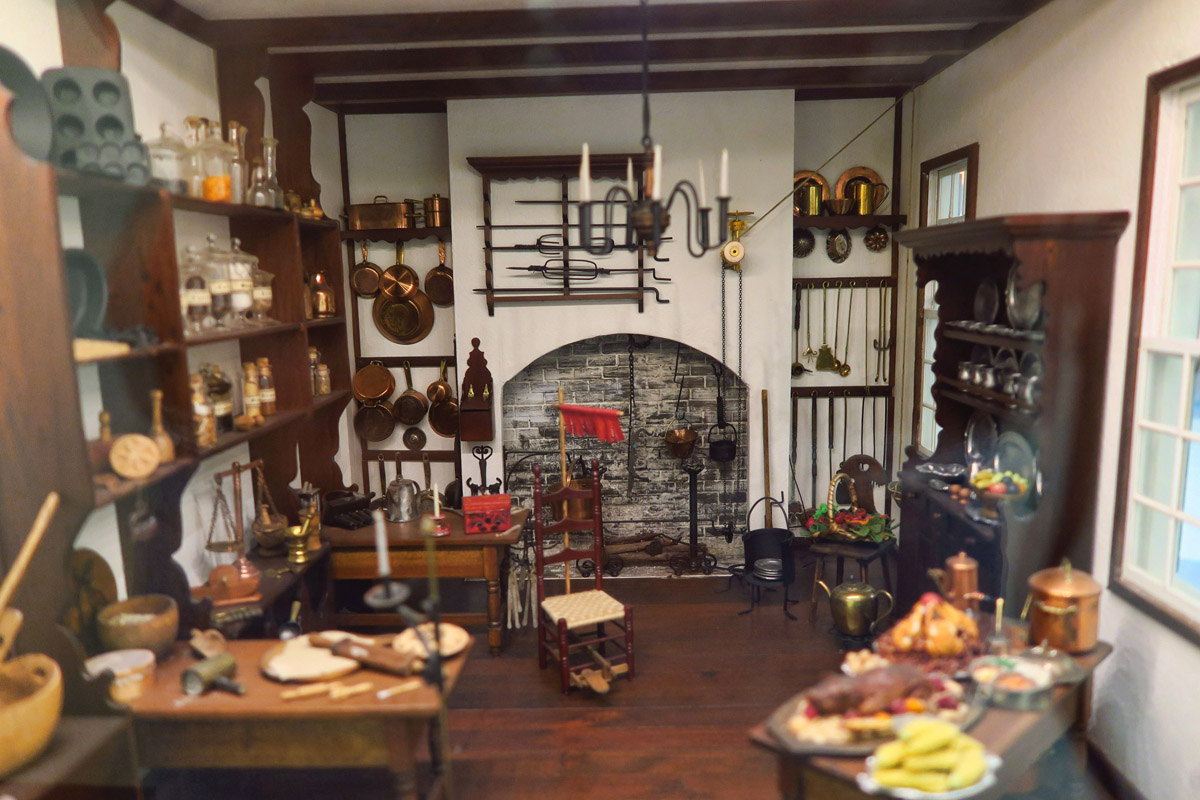 The kitchen. Note on the left apple pie in the making. The chair in the center of the room is called a “Shoo-fly Chair.” The working pedal on the floor moves the red tassel overhead to shoo the flies away.

Though I originally stereotyped this museum to be more of an interest to the female contingent, I am surprised to find as many men touring the exhibits as women. This should have been no surprise, however, as any admirer of fine craftsmanship would enjoy these replicas. Thinking back to my own childhood, my brother Don always got involved furnishing electrical wiring throughout my own dollhouse. 😉 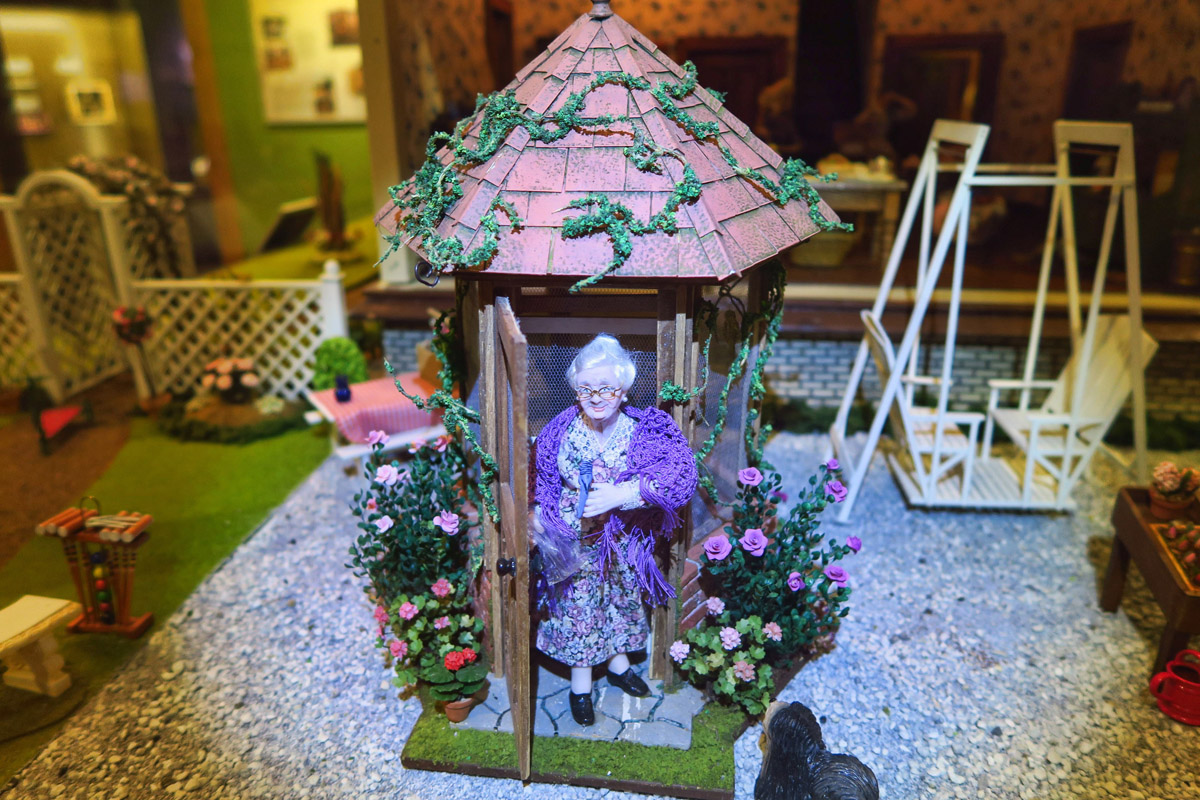 The dowager in the gazebo is part of the John Bellemy Complex, designed after the artist’s own home in 1880.

The Museum of Miniatures is a non-profit organization founded by Patricia and Walter Arnell as a way to showcase Mrs Arnell’s vast personal collection of miniatures. Her collection initially filled a room in her home, expanded to a three building house in her back yard, and now occupies a beautifully designed space in the northern part of Tucson, opened in 2009. “Mini Time Machine” seemed like an odd name for a museum of “dollhouses” at first. I would not have associated it with the actual theme. However Mrs. Arnell felt the miniatures transport the visitor through other lands and times. 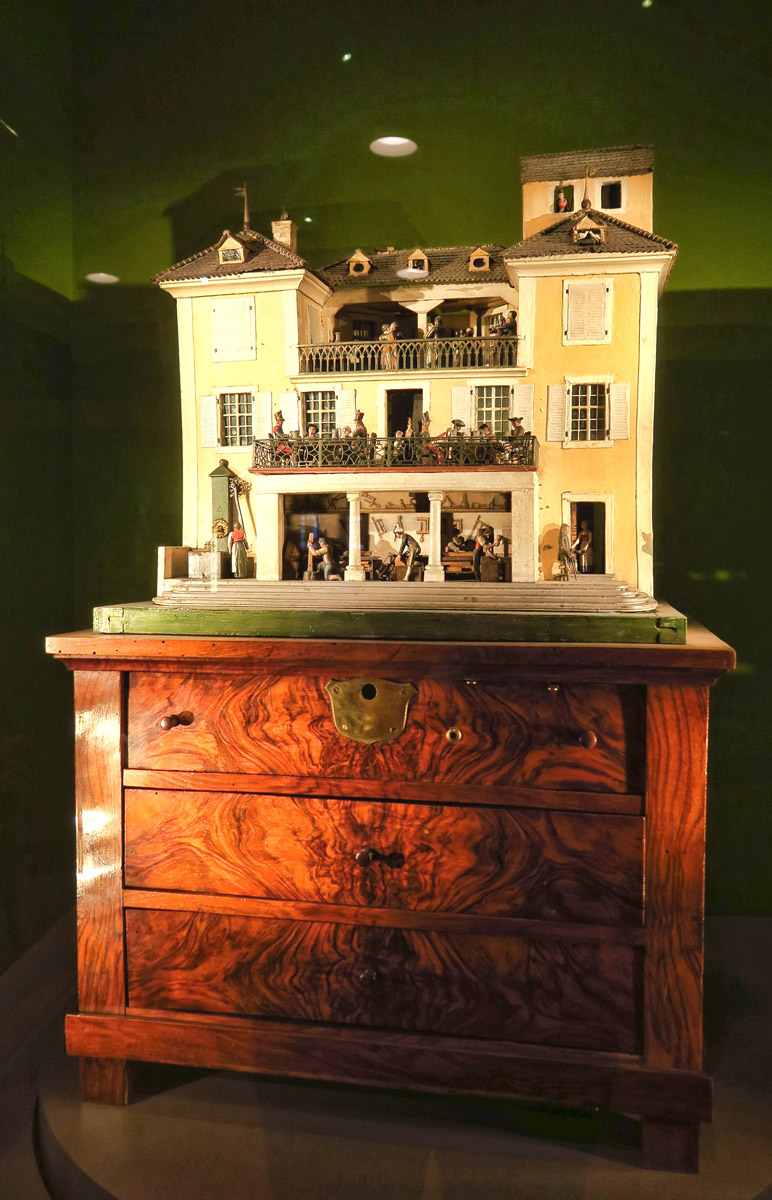 Automated House designed by Emil Wick, 1885. Modeled in the style of elaborate clockworks for which his home, Basel, Switzerland, is known. 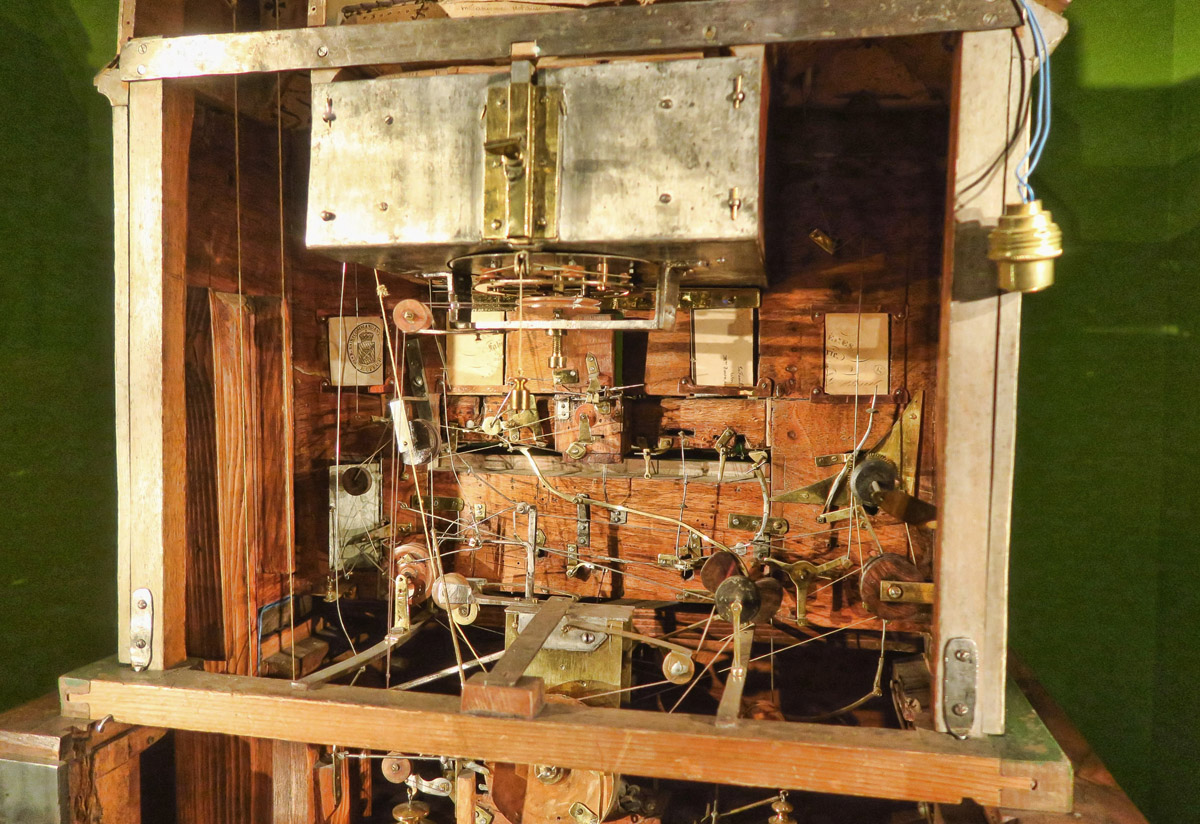 The back side of the building. Mechanical figures are animated by this key-wound and weight-driven mechanism. 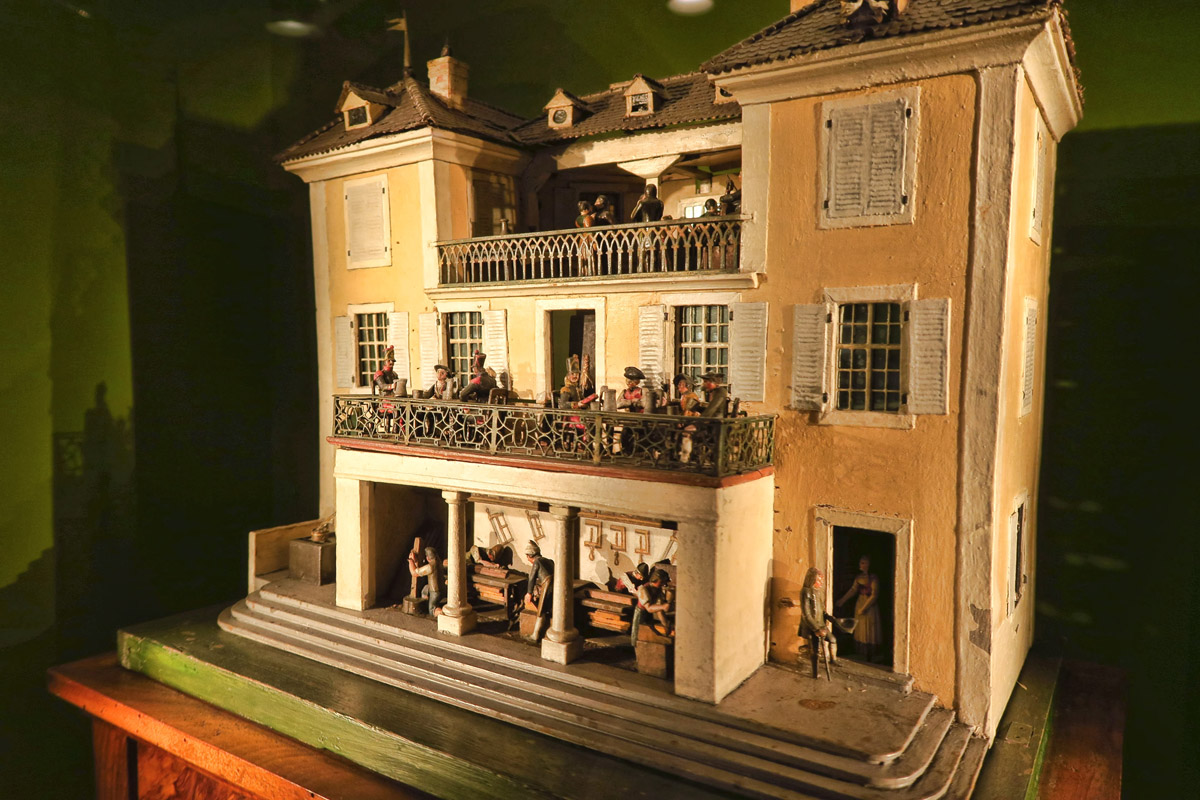 There are 30 different movements, some complex. Dancers pirouette to the waltz while servants below perform chores.

I arrive just in time for the 1:00pm Docent Tour. I highly recommend this tour, as the level of detail in these replicas can otherwise be overwhelming. As we move from house to house on the hour-long tour, she points out intricate details that I might have otherwise missed, for example, the ghost in the attic, as well as a “dollhouse workshop,” …a miniature inside a miniature.

As the docent explains the hand-crafted furnishings in each room, pointing out the realistic portrait of George Washington, describing lighting used following the days of Thomas Edison, I have to remind myself that I am looking at a miniature, not the actual original house itself. 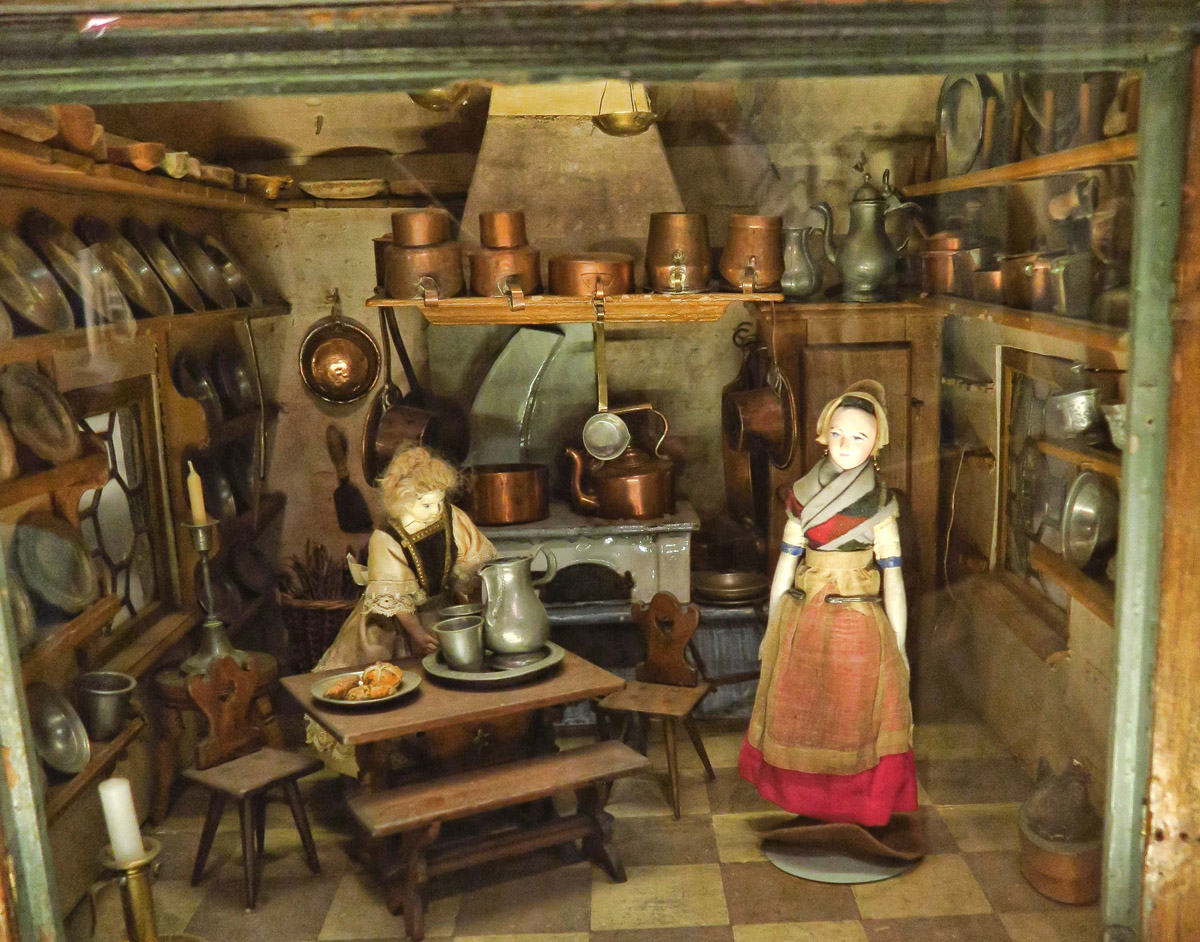 This kitchen is the oldest piece in the museum, built in 1742, long before the miniature scale standard of 1:12 was established. That’s why you see candlesticks as big as a forearm. 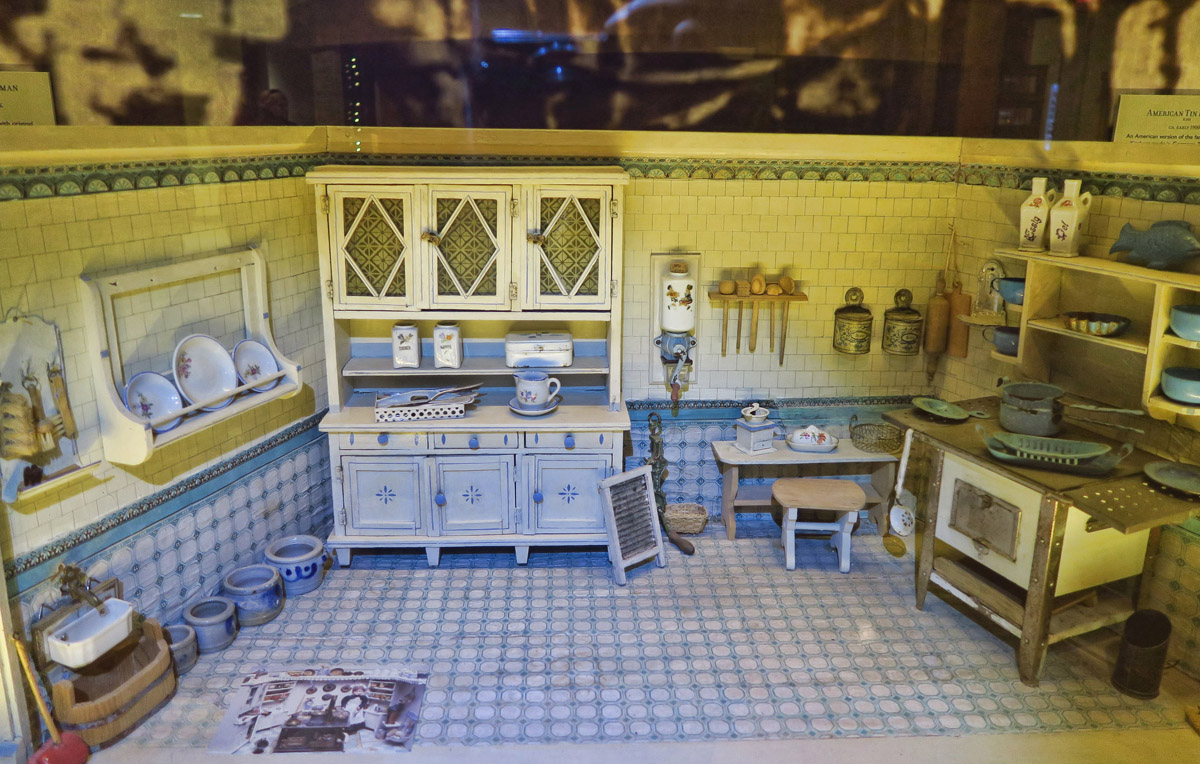 Nuremberg Turn of the Century Kitchen, 1909. Created prior to the 1970’s, it does not follow the 1:12 miniature scale. Originally a child’s toy rather than a collectable. Small water tank behind the wall allows faucet in lower left to function, while stove could be heated by placing a candle inside.

But the museum goes way beyond dollhouses. There are workshops such as the violin-maker’s shop built inside an actual full sized violin. A silversmith’s workshop. A department store with actual replicas of all products sold at the original store including a soda fountain. A Jewelry Store with cases filled with microscopic jewel-studded wedding rings.There are Thai temples, a Mexican Cantina, a floating Asian market, all with the intent of traveling the world through the art of miniature. 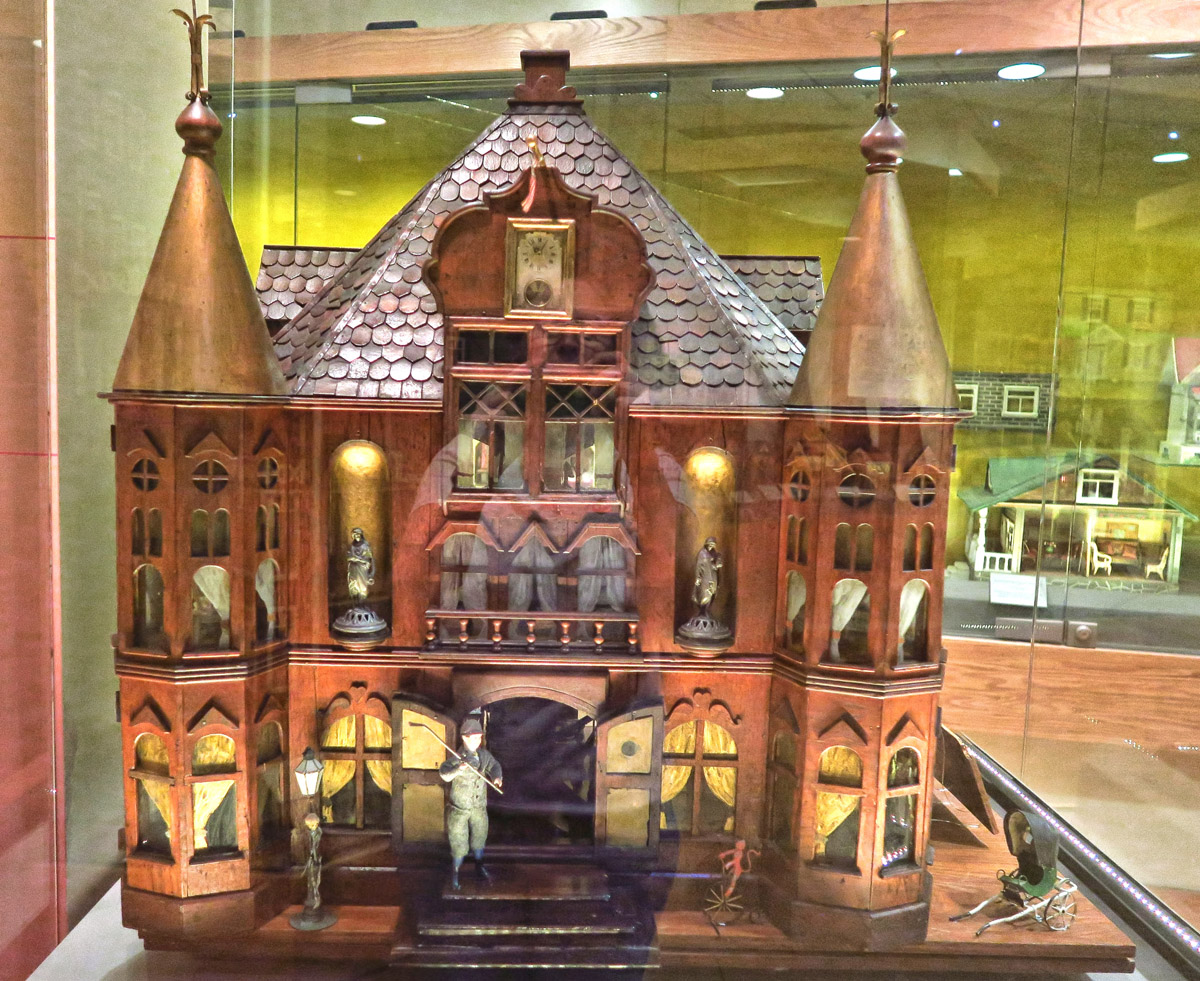 This house is named “Just Suits,” built from walnut cigar boxes. ca 1900’s. Most furnishings inside are original. 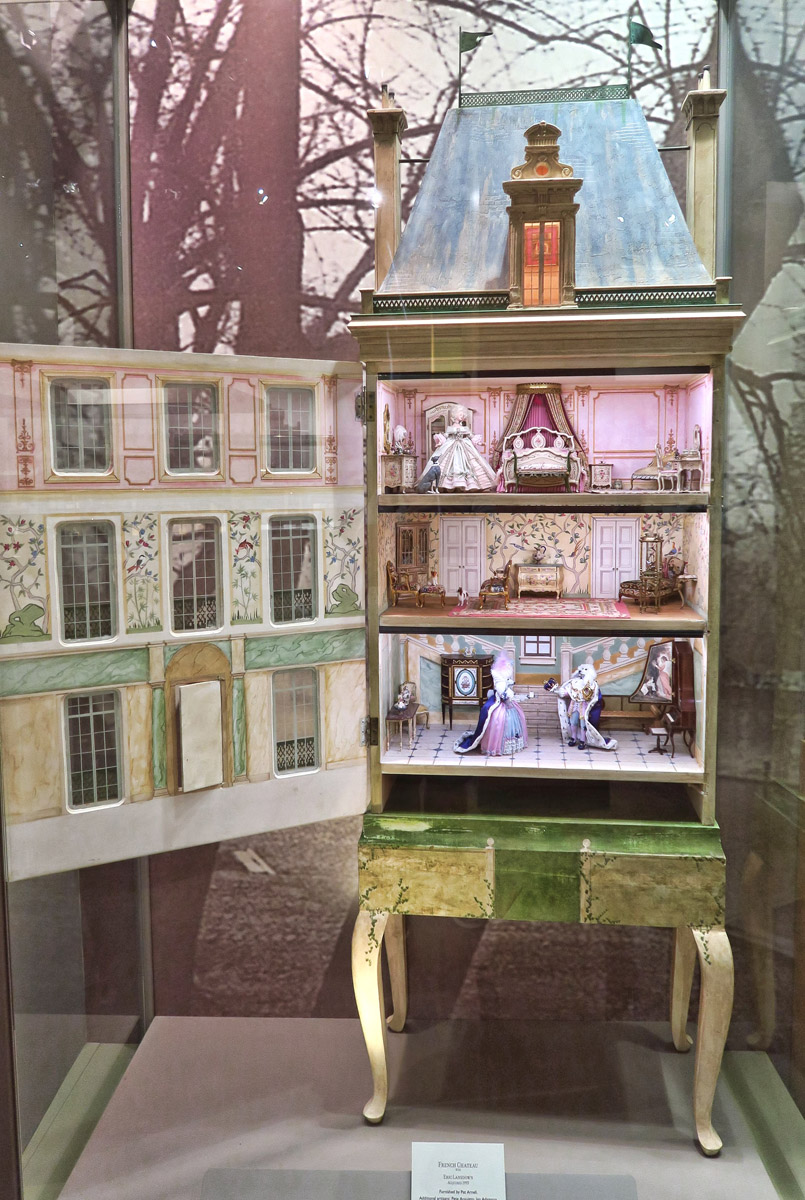 Some “houses” are built into pieces of furniture. Note matching wallpaper and window treatments on cabinet door. There appears to be a costume party about to begin on the first floor.

A closer look at the costume party. 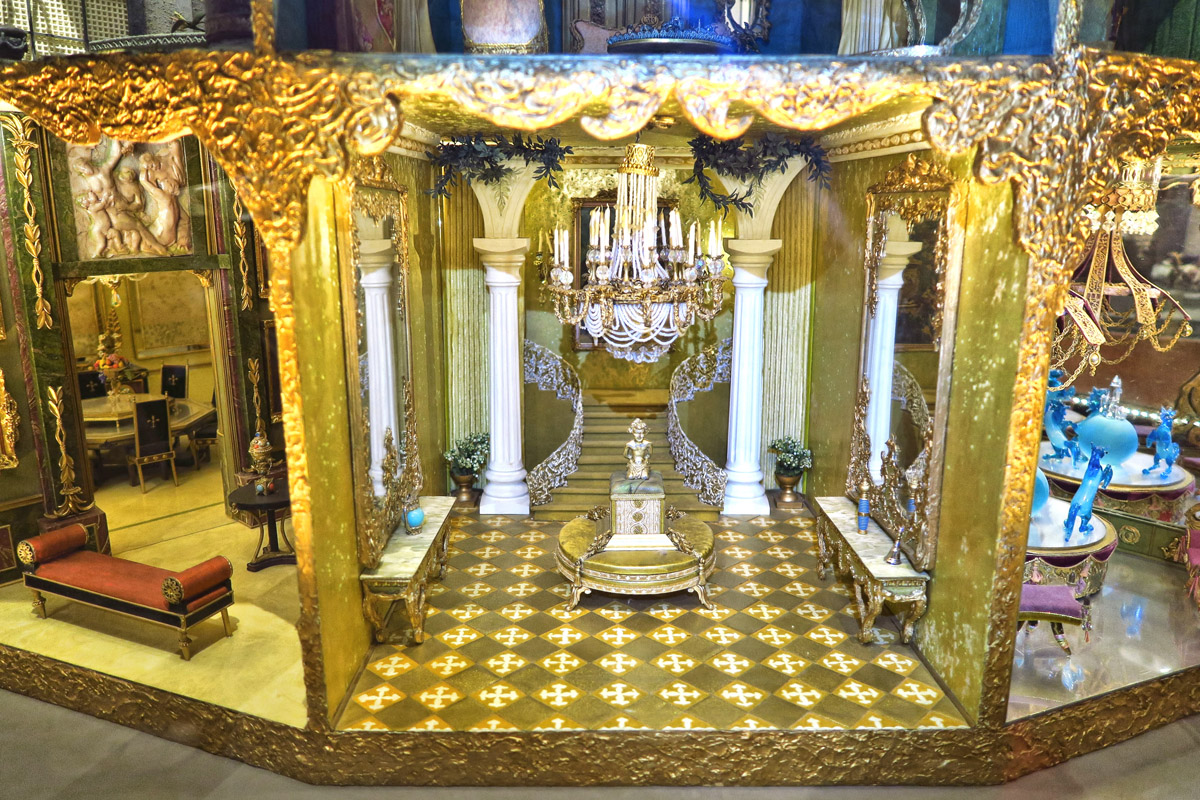 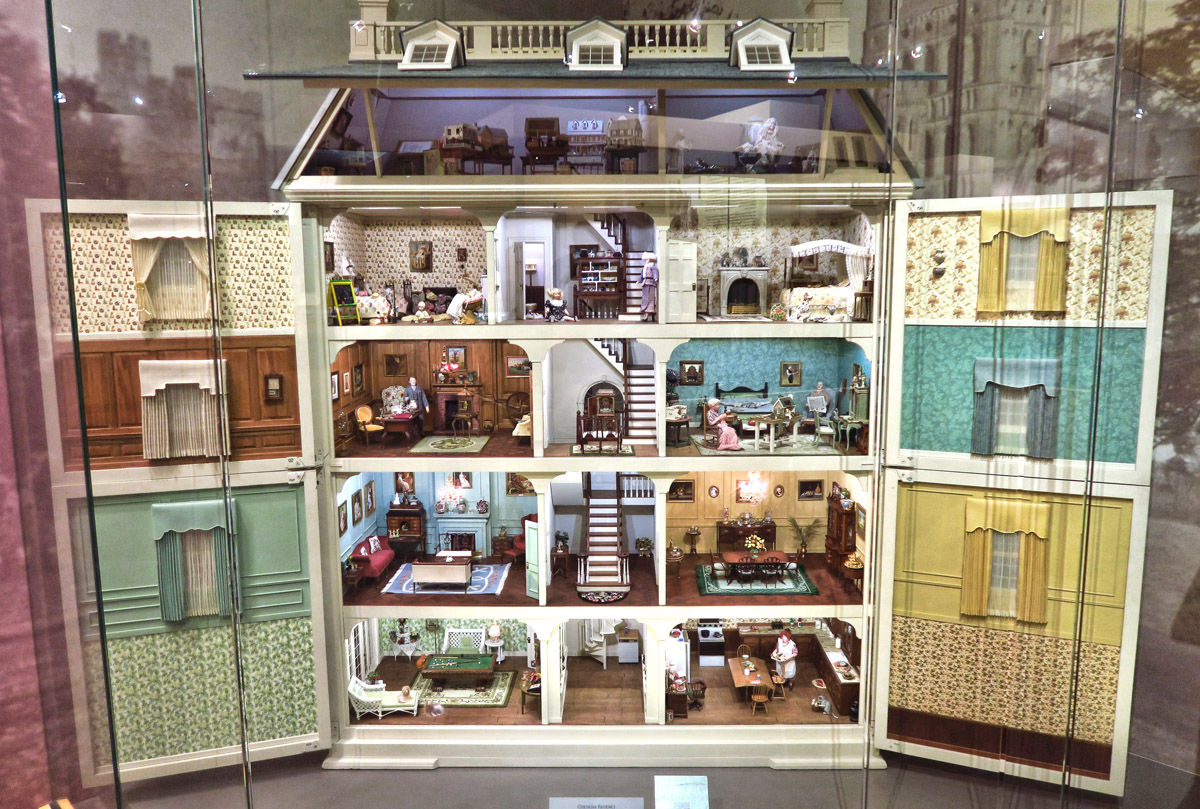 The museum founder, Pat Arnell lived in London as a child on Regent St in the early 60’s. In 1981, she commissioned a replica of her childhood home to be built. 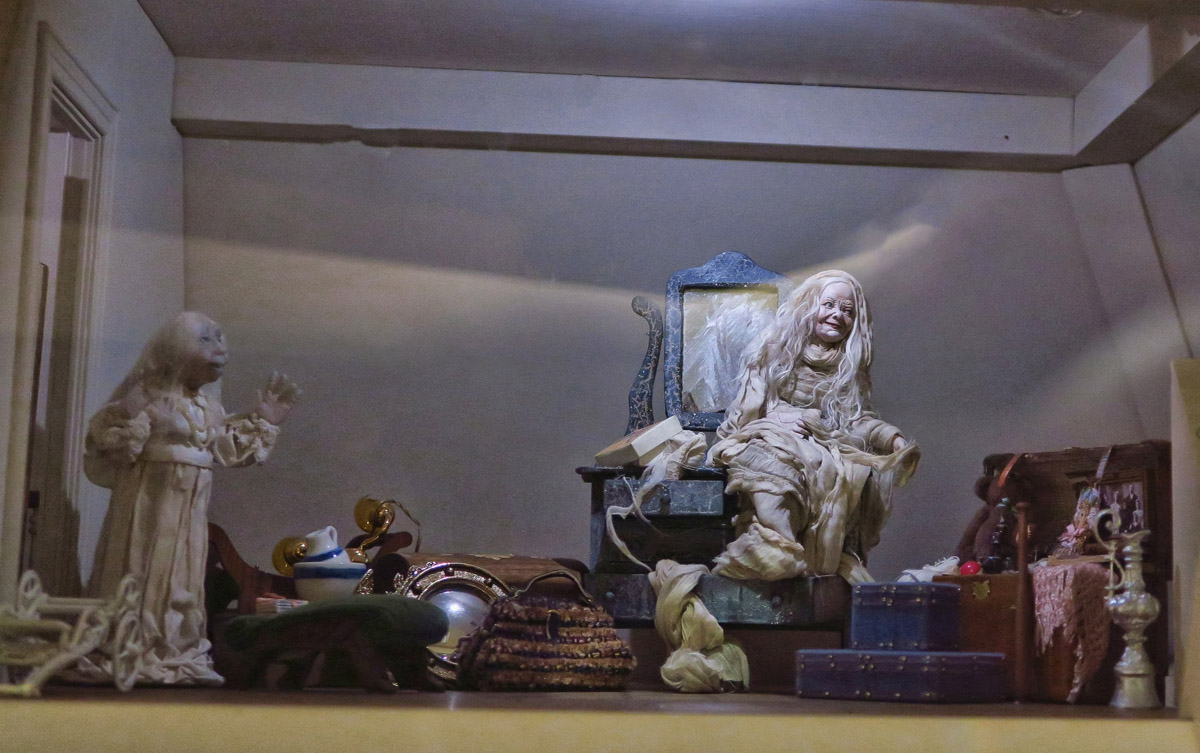 The children believed the Regency House to be haunted, so Mrs. Arnell had the artist put a couple of ghosts in the attic, 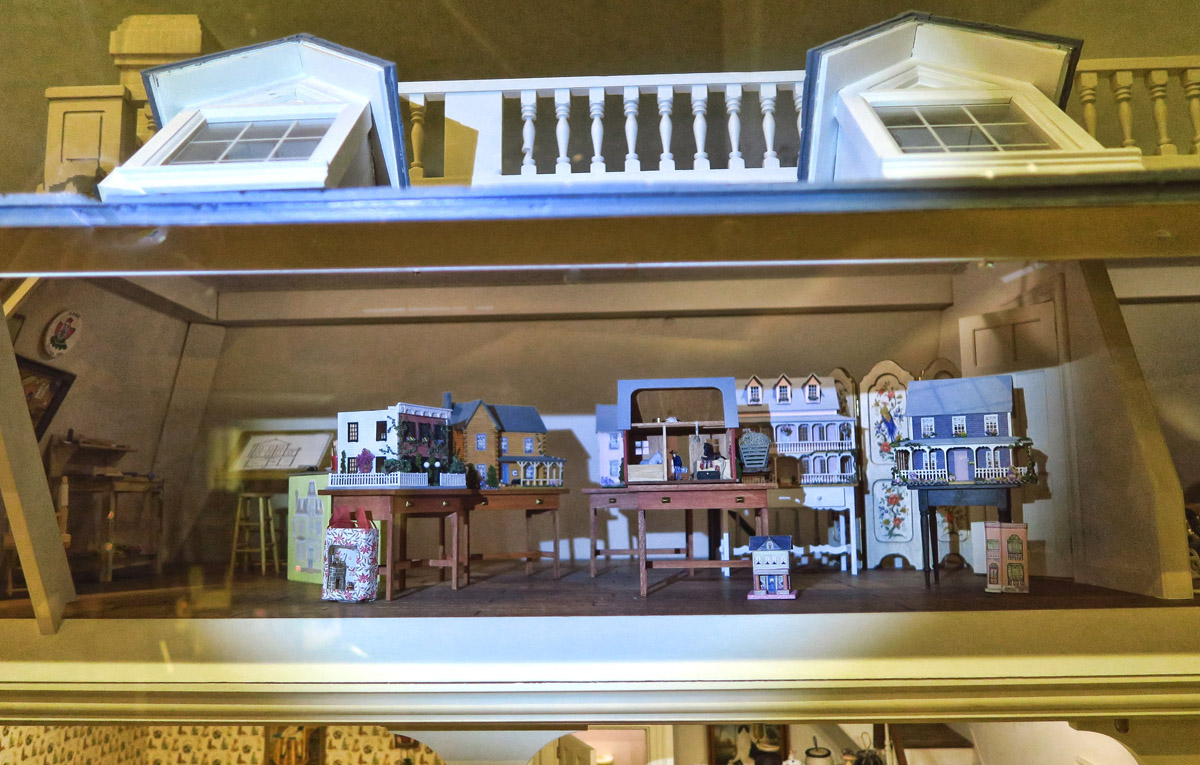 After the tour, I go back through the museum to have a closer look on my own, without having to be considerate of blocking the view of others in the tour group. The Docent has informed us that flashlights and stepstools are available for no charge to aid in ones exploration. Although I don’t need the step stool, I do enjoy the benefit of the loaner flashlight, as many of the details go deep into the houses, such as perfect scale replicas of presidential portraits hanging on walls, a sextant in the Sea Captain’s office, human hair wigs. So much detail that would otherwise be missed without the aid of illumination. 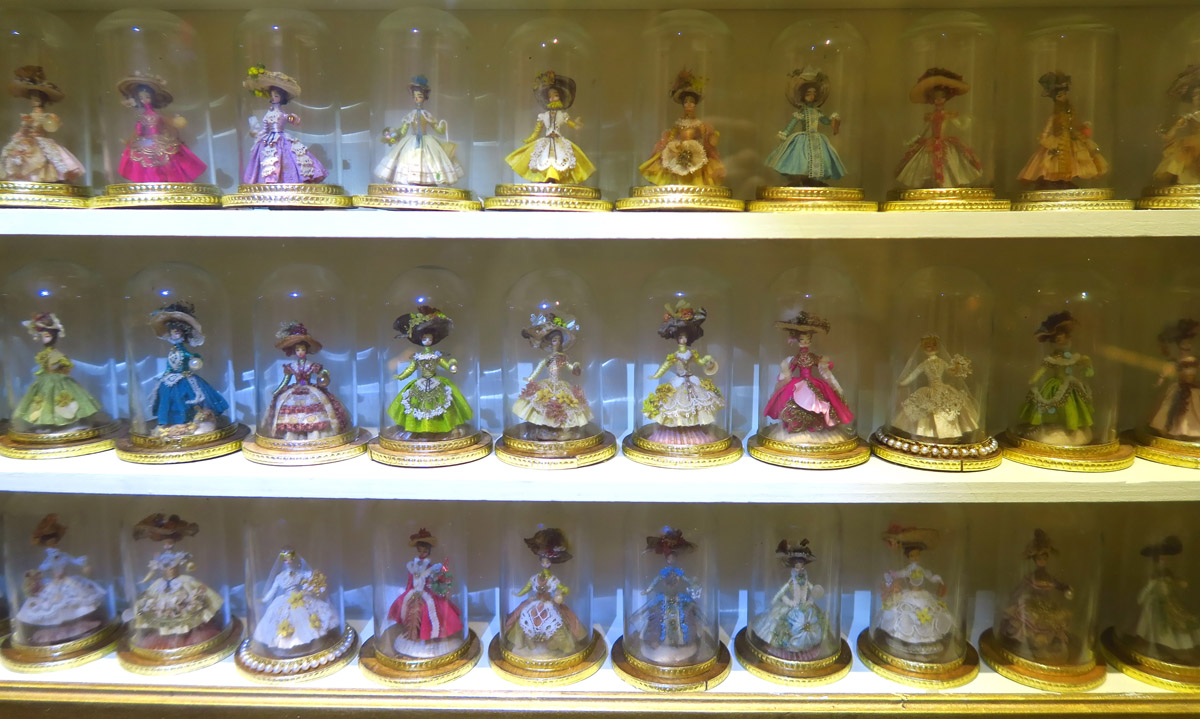 Fifty-two miniature dolls in original glass domes. Dolls are formed with a grain of wheat with painted features. Arms are thread wrapped around wire. Costumes are Swiss silk with dried plant accessories. Originally sold in Marshall Fields in Chicago in the early 1950’s. 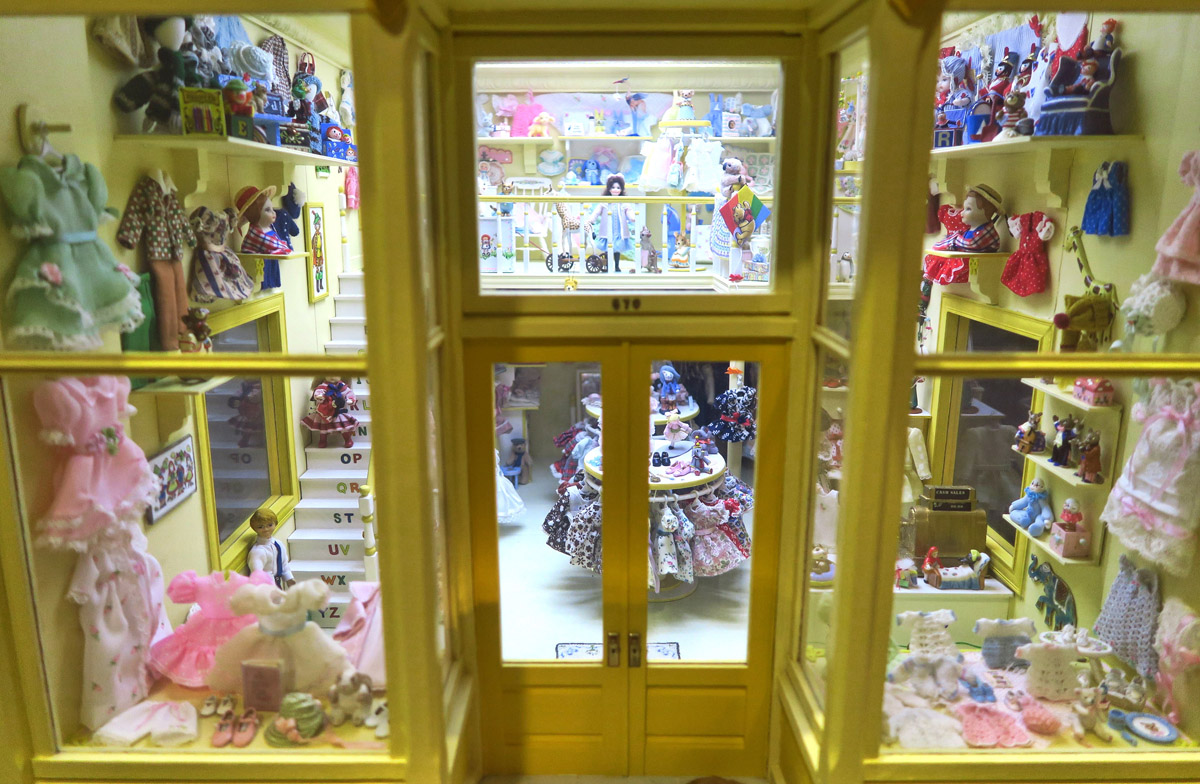 Child clothing store reminiscent of my own childhood favorite, the Tot Shoppe. Note tiny dresses on hangars on circular rack in center. 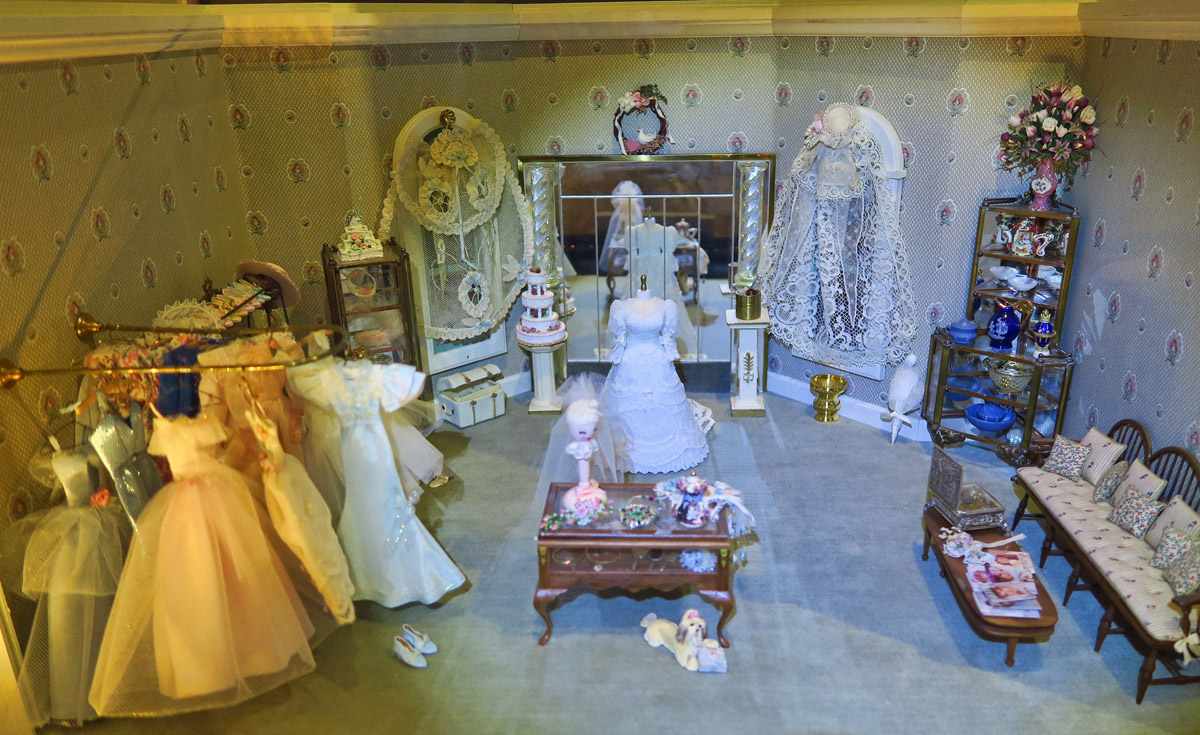 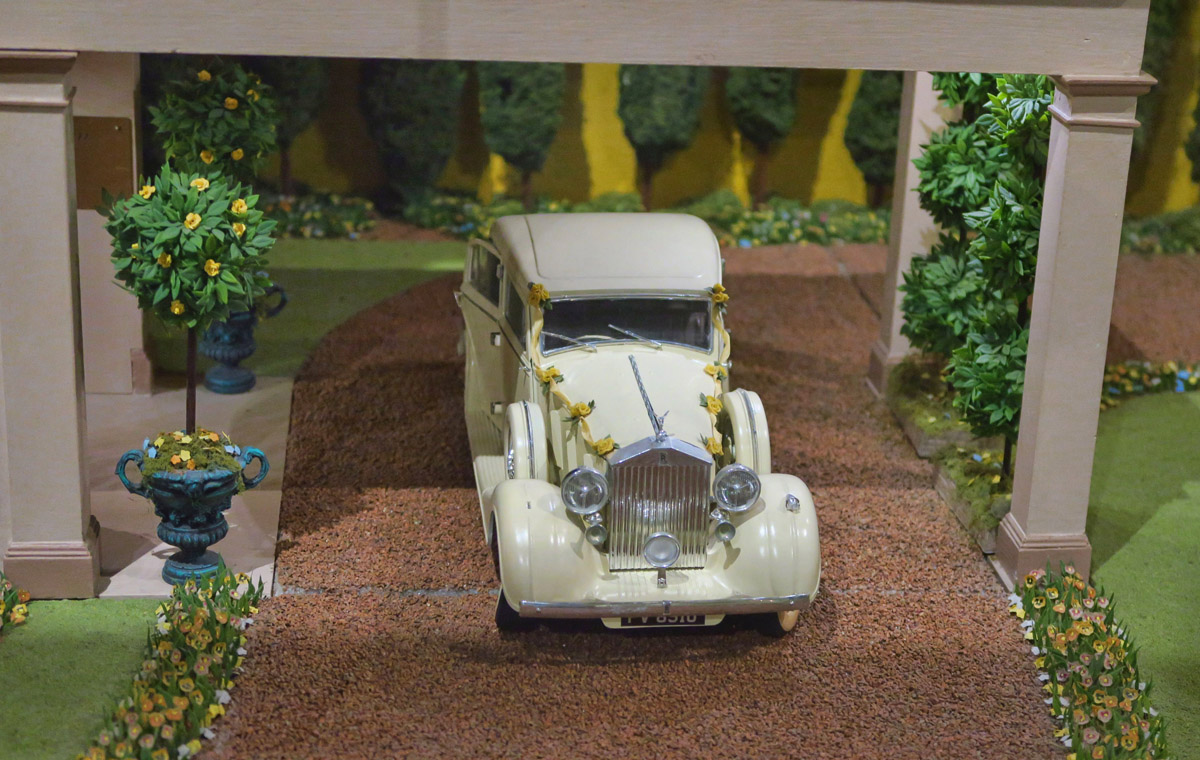 Rolls Royce decorated outside the Yellow Rose of Texas mansion where a wedding is taking place. 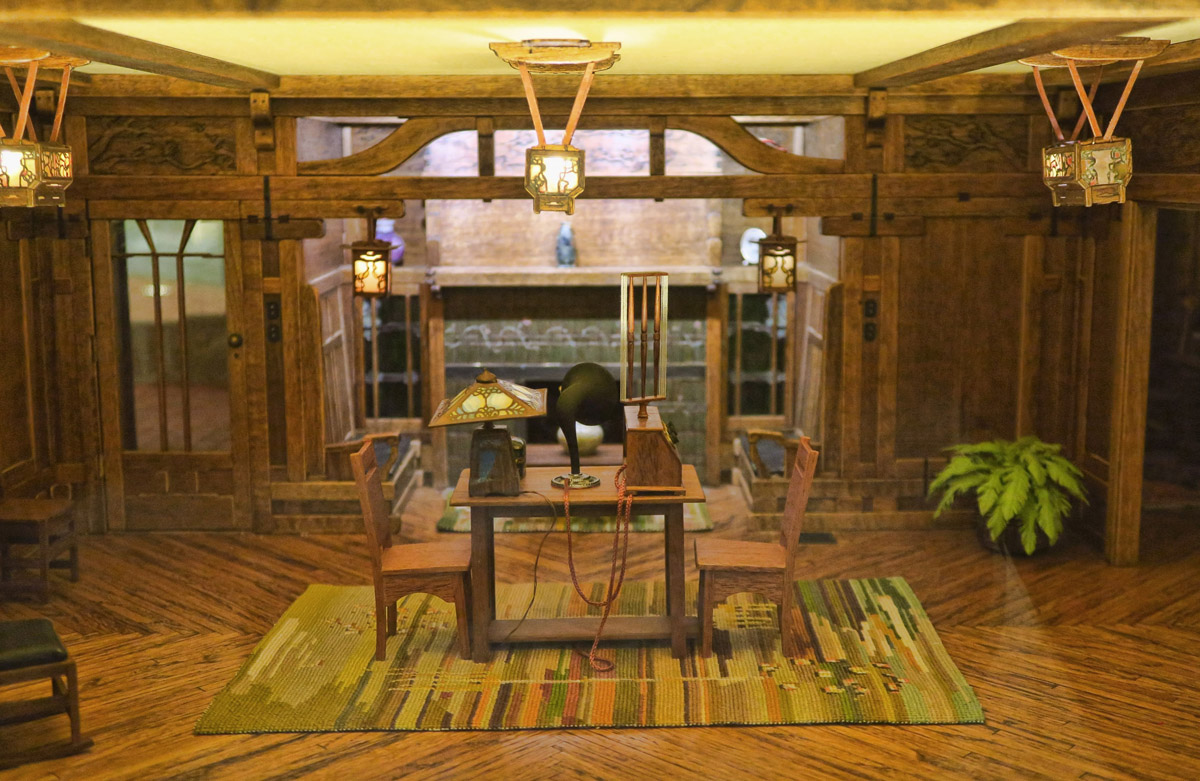 Replica of the Gamble House in Pasadena, CA, Craftsman style home built by architects Greene & Greene between 1907 and 1910. Note working craftsman-style light fixtures suspended with strips of leather, just like in the real house.

I run out of time before I can fully explore the last room, the “Enchanted Realm,” shortchanging mouse habitats, haunted houses, Santa’s village, and Caitlin, the resident fairy. While my expectation was to spend an hour in the air conditioning escaping the Tucson afternoon heat, I am the last to leave the museum, kicked out after three hours! 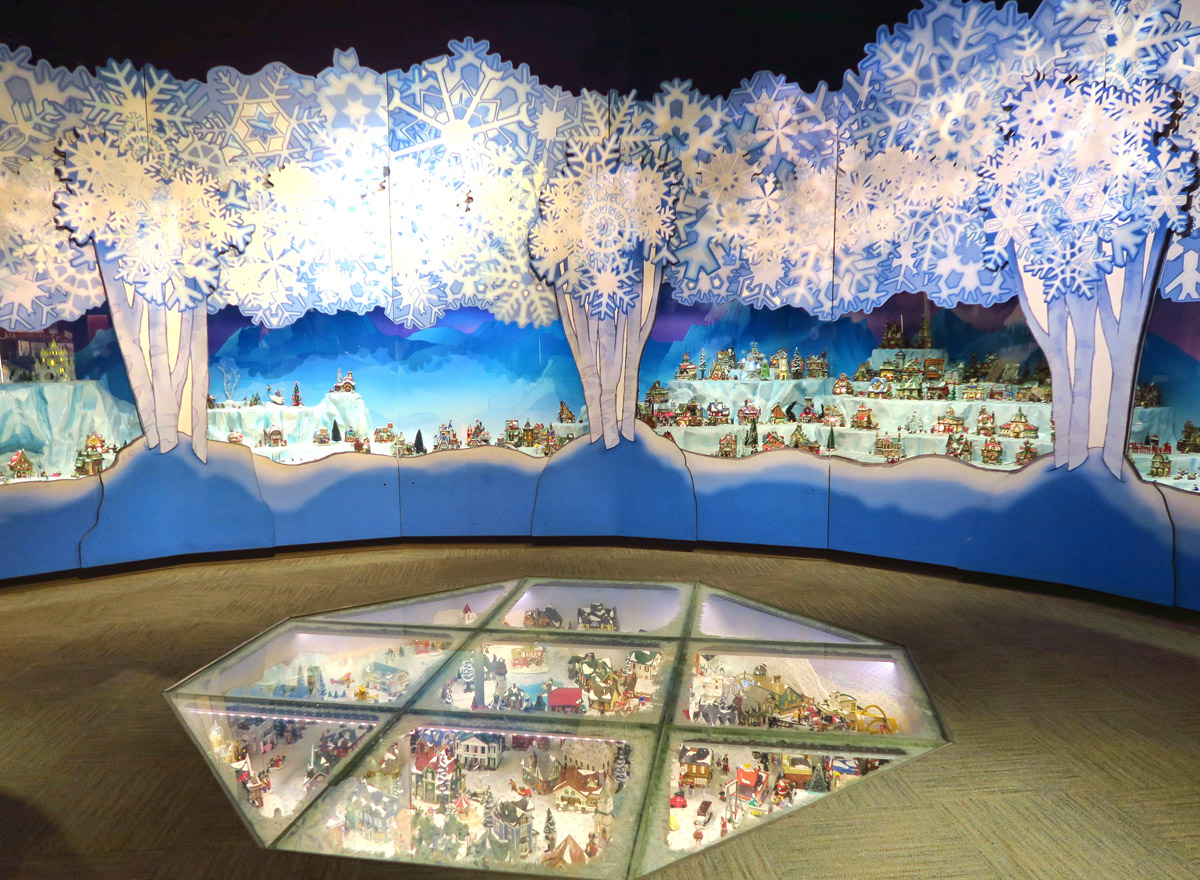 Final room of the museum is the “Enchanted Realm.” There is a giant four-season tree with mouse houses and fairies. Here is Santa’s Village recessed into the walls, and in the sunken floor display.

And with that, I am segueing to a different kind of “mouse house,” or rather how to encourage those little critters to stay in their tree houses and out of my engine compartment! While in Tucson, I visited the Harbor Freight and found these solar rope lights. I like them because unlike most rope lights, these are “miniature.” The rope is only the diameter of a pencil, so they are easy to handle and easy to store. The box was $12.99, though much cheaper if you can catch it on sale.

Whether it works or not is yet to be seen, but the theory is that rodents are nocturnal, and stay away from lighted spaces. Though I have not gotten up at pre-dawn hours to see how long the solar charge lasts, they cast a bright glow into my engine compartment after dark. Let’s just hope the mice don’t think it’s a disco in the Enchanted Realm! 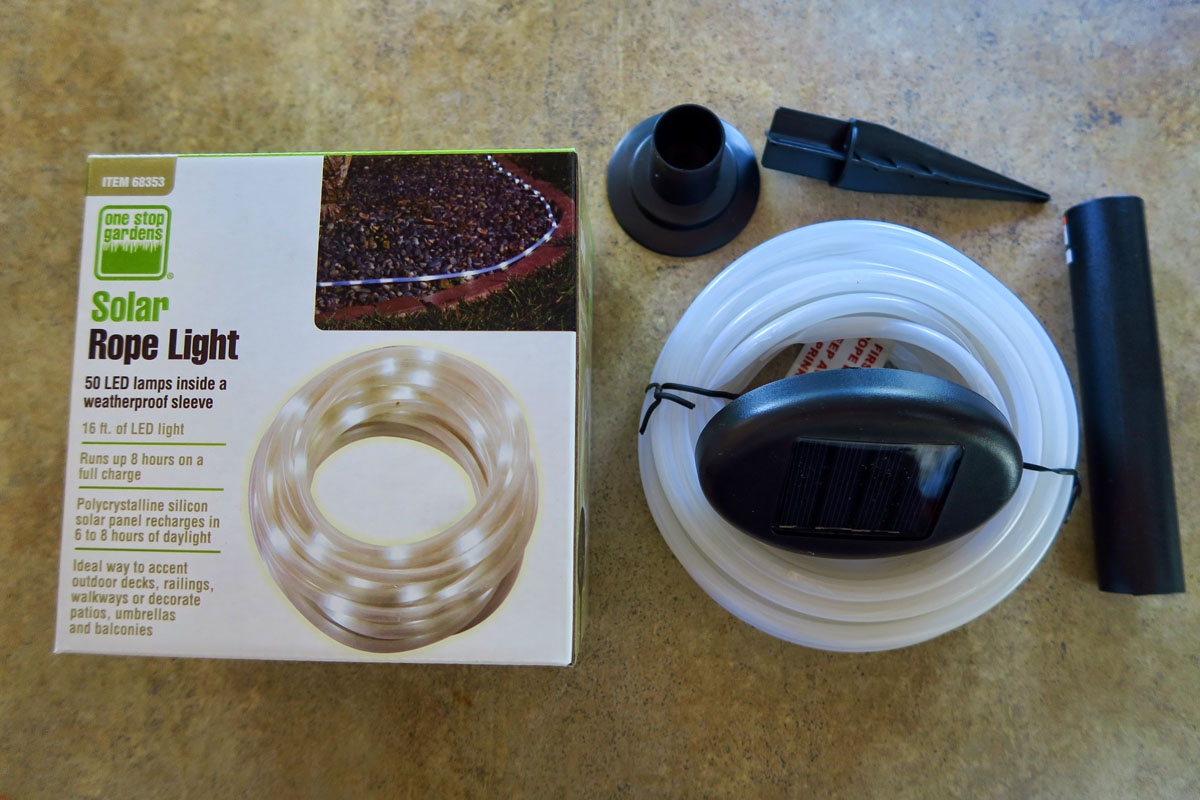 13 thoughts on “It’s the Little Things in Tucson”