I used to not think much of “black top camping.”  Why on earth would anyone choose to pay money to stay in a parking lot?  Particularly when you can often drive a few more miles and find a boondocking spot?  But there are those instances where the assets outweigh the asphalt.  The Lake Fork Campground overlooking beautiful Blue Mesa Reservoir is just such a place. 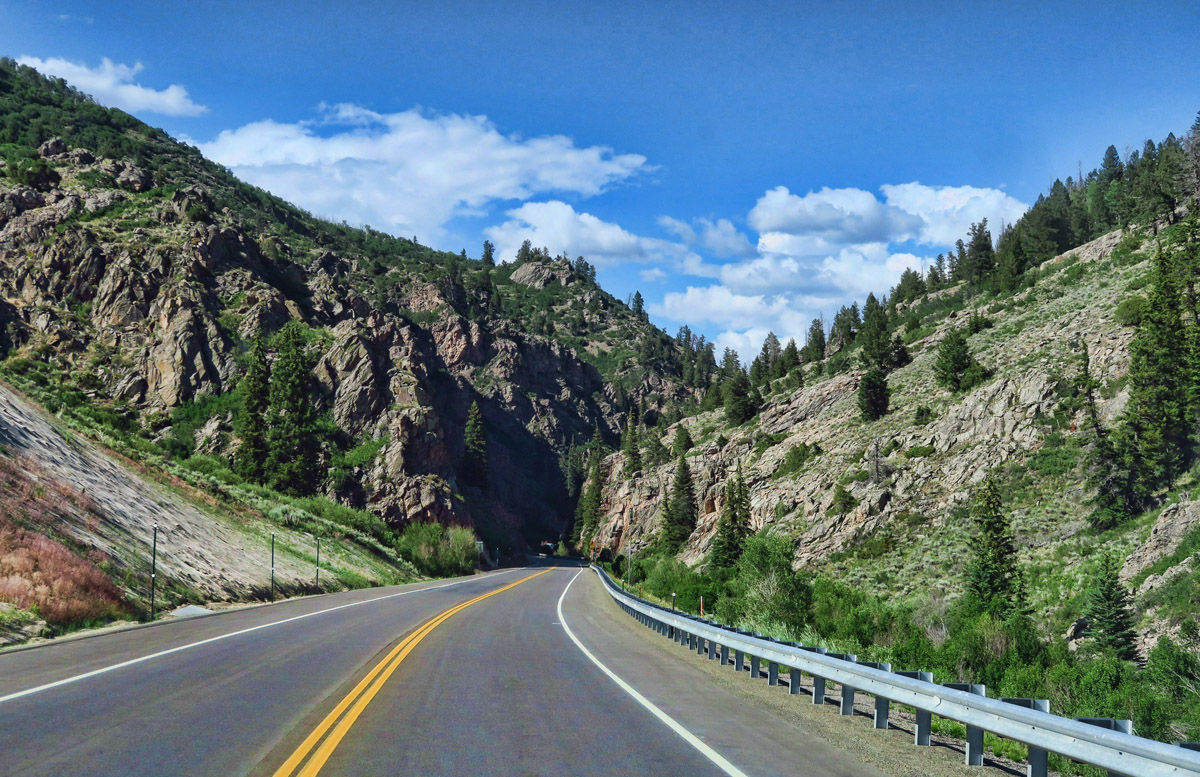 Beautiful drive along Highway 50 between Montrose and Gunnison, CO. 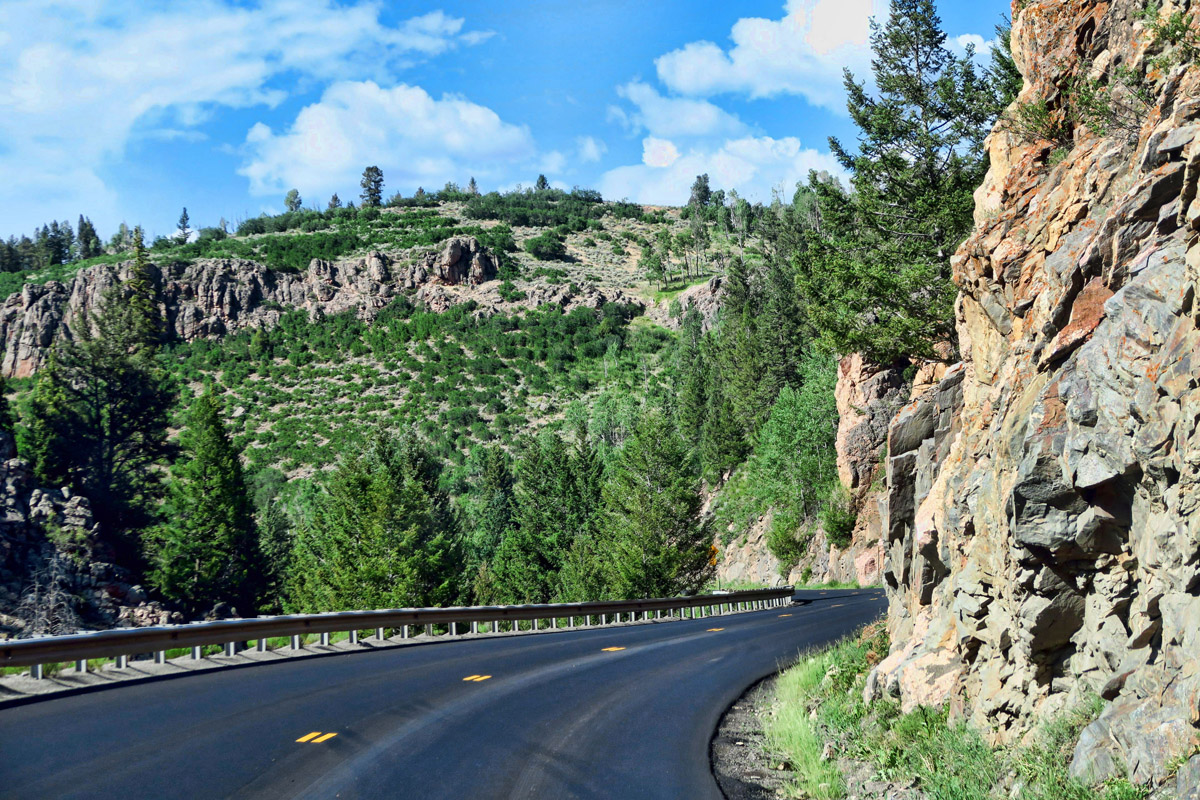 The highway passes Black Canyon of the Gunnison National Park before running through the Curecanti National Recreation Area.

There are certain benefits that come with black top camping over boondocking.  One can enjoy the monsoons without worry. Watching the deep, ominous clouds form while sheets of rain roll across the lake on the heels of rolling thunder is meditative to me. But I have to confess, the soothing sight is negated by fears of being buried up to the axles.  Being in a boondocking location usually means being on dirt, sand, or some other surface easily compromised on a whim from Mother Nature.  At least on asphalt, there is no danger of getting stuck.  I can watch the rivets of rain on my windows without worrying about rivers of runoff beneath my tires. 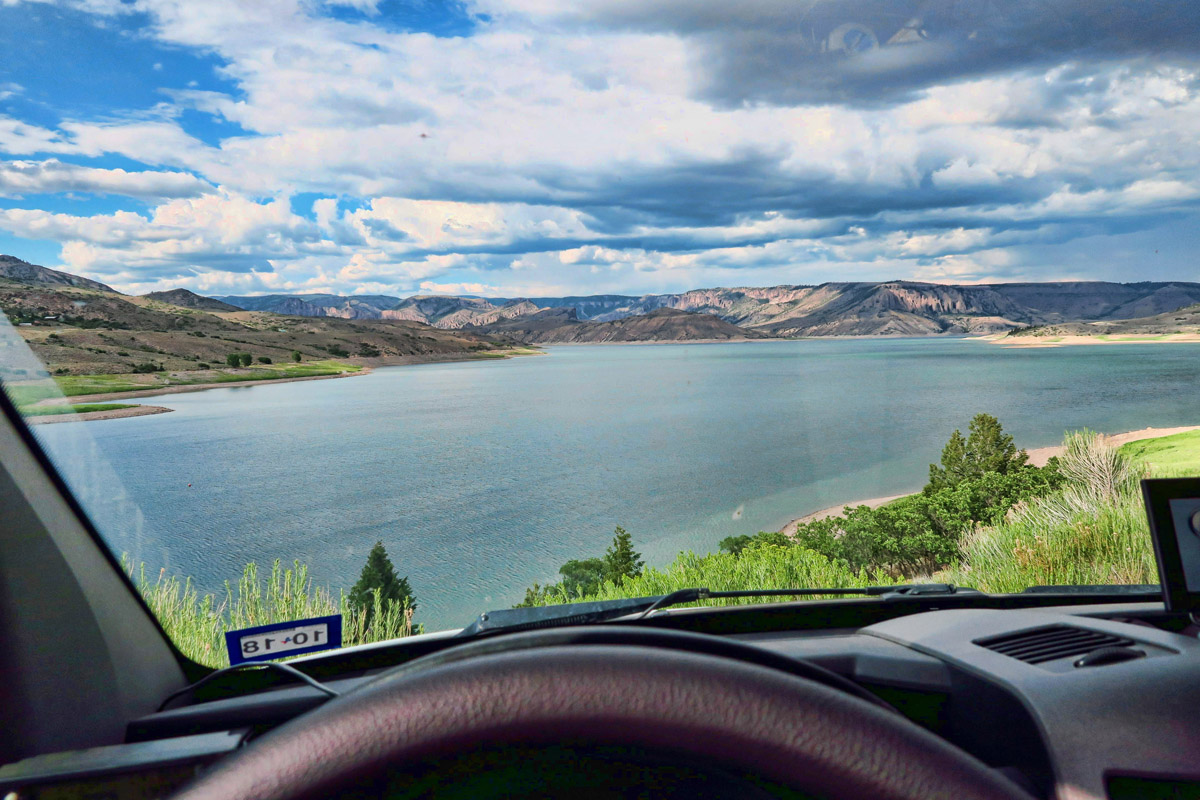 This is the view from the driver’s seat as I pull into my asphalt parking spot. Eight dollars with the Geezer Pass. 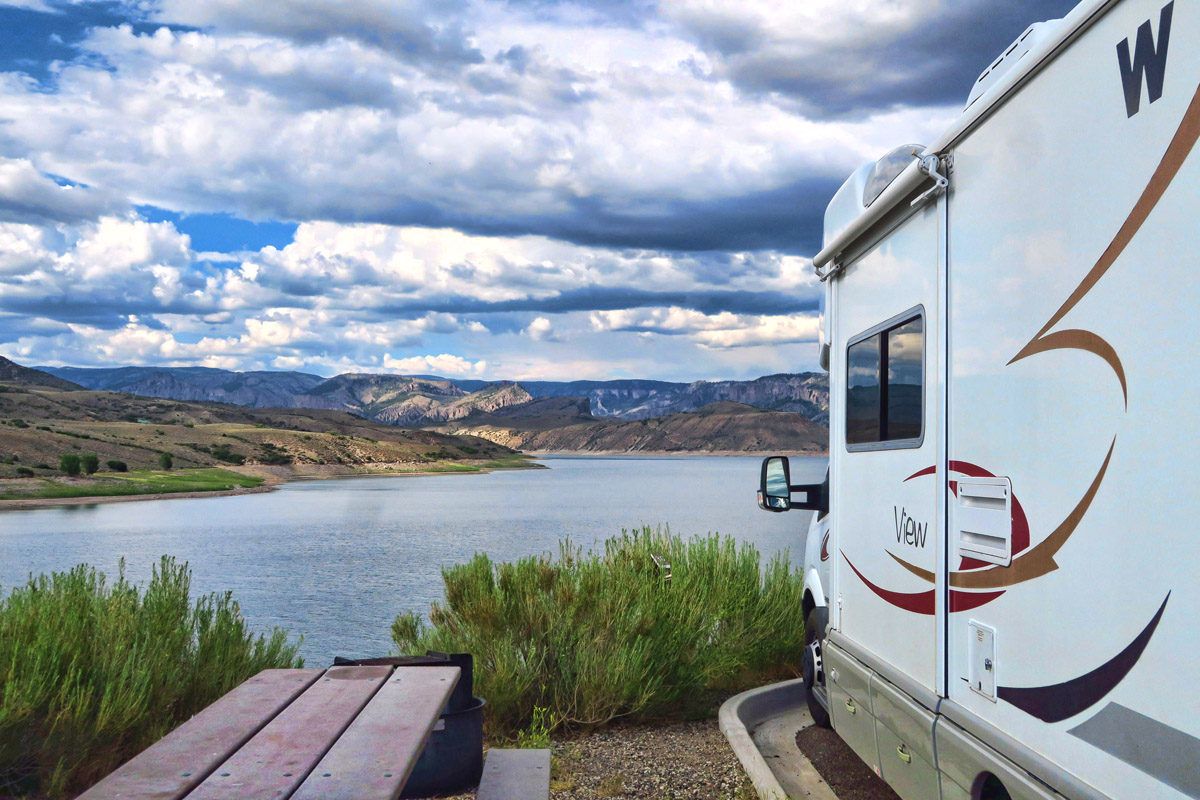 Nice views of the weather patterns rolling in.

An asphalt campground typically offers other benefits as well.  Its lack of campfire rings insures I won’t fall asleep wondering if the forest is on fire because someone built a campfire from wet wood.  I used to love a good campfire, but when it’s someone elses, you don’t get the ambiance, only the smoke. And after dodging smoke clouds all summer from forest fires, the last thing I want to smell as I drift of to sleep is a smouldering campfire. Besides, the inability to have a fire typically lessens the chance of three year olds on tricycles.  Because heaven forbid, it wouldn’t be camping without a campfire, right? 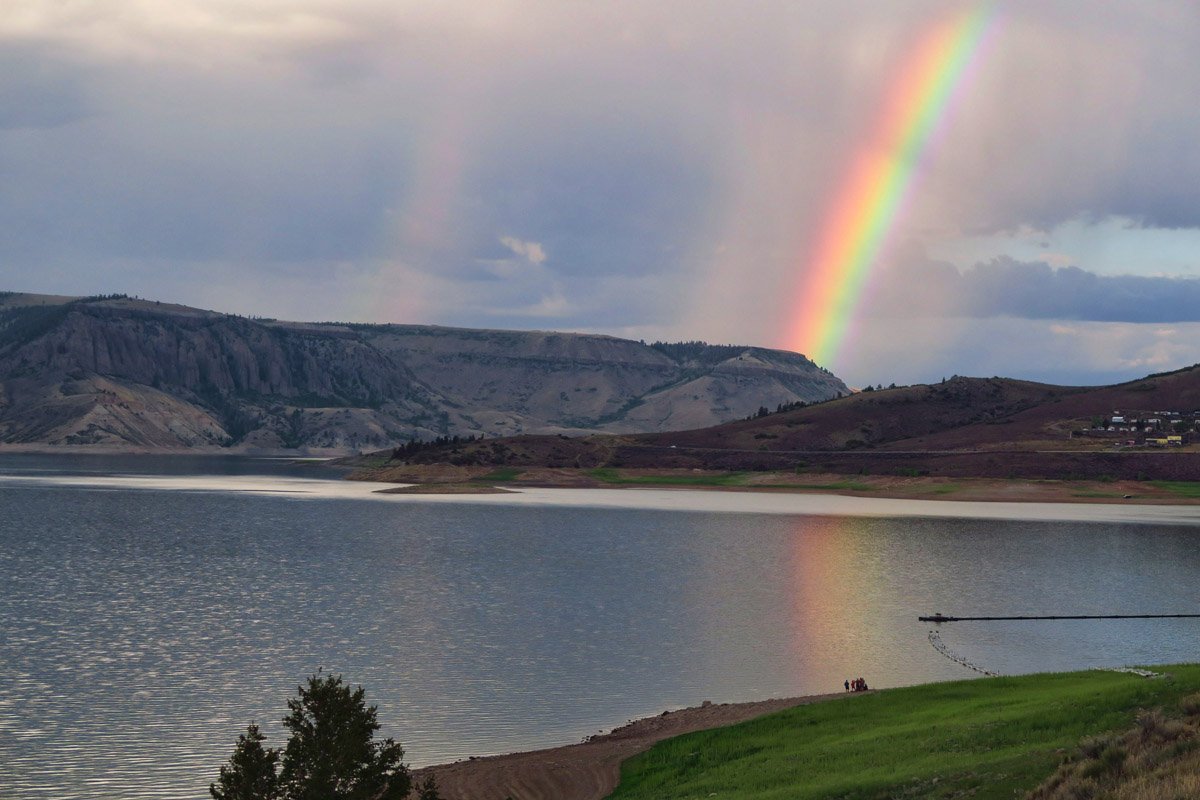 I have seen lots of rainbows in my time, but this may be the first one I’ve seen reflecting on the water. 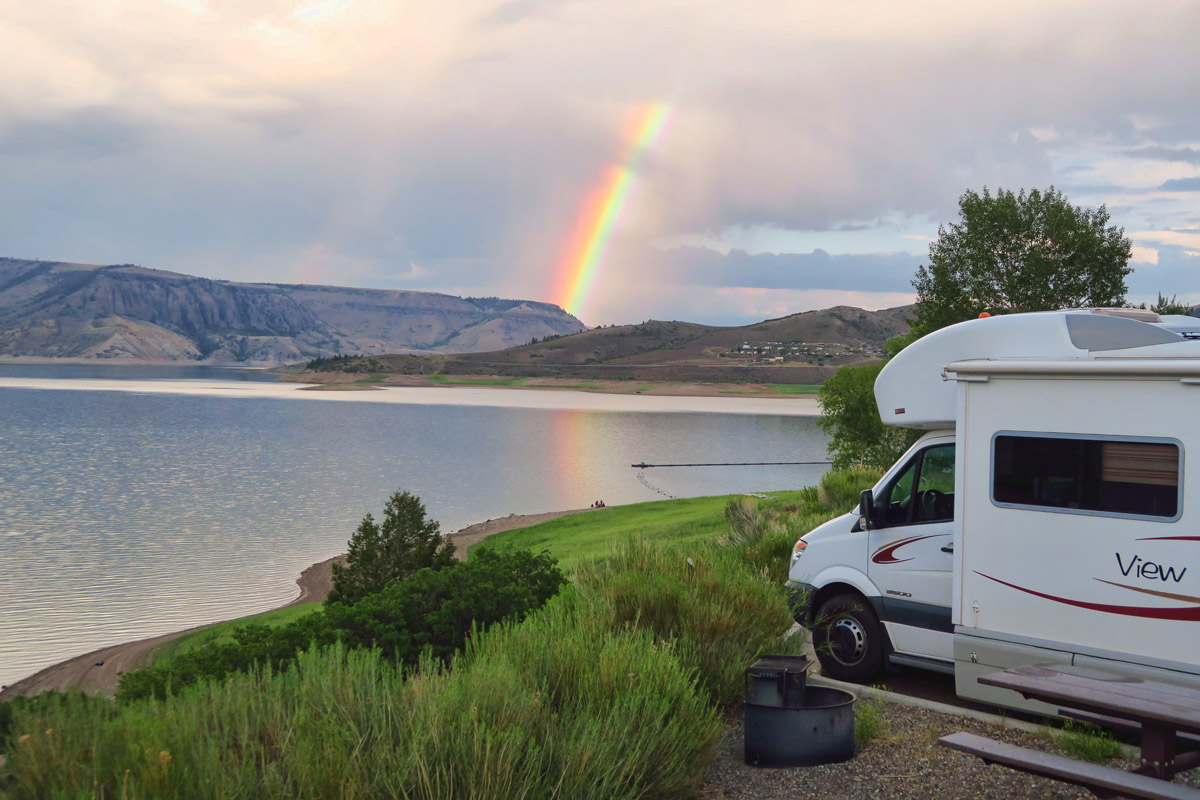 It just keeps hanging around, so I grab my camera and go down to the waters edge. 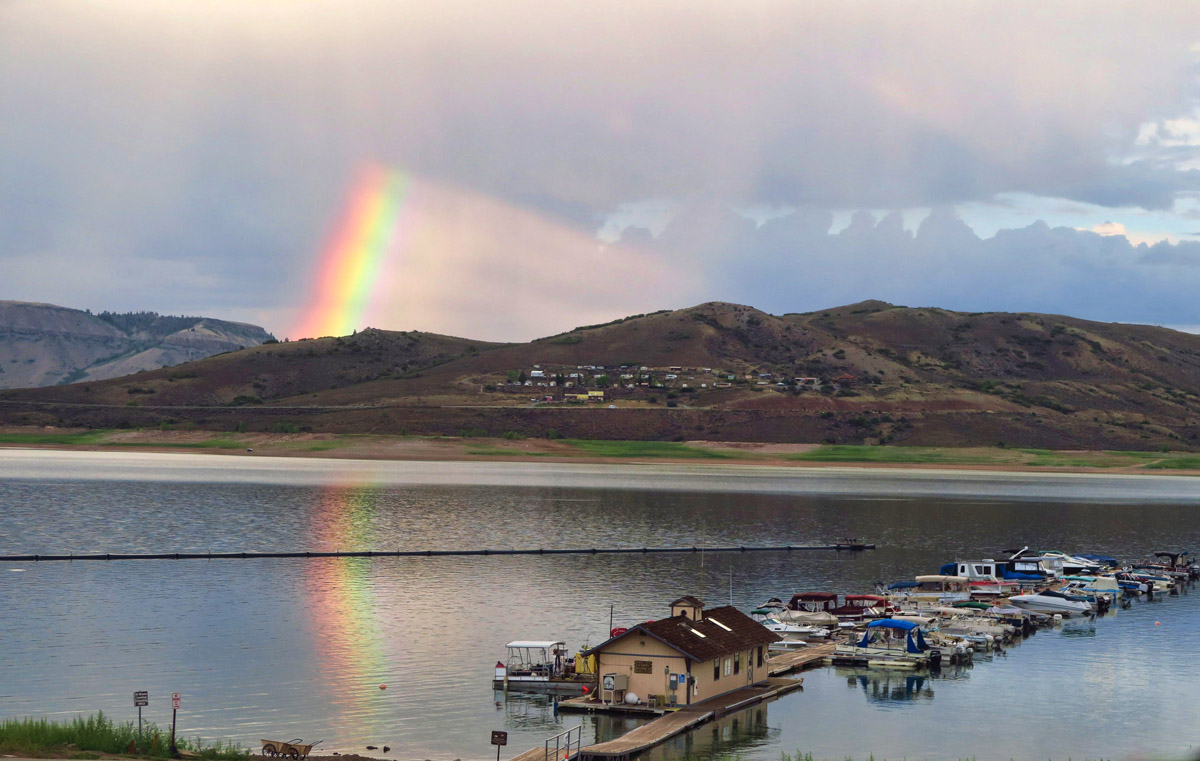 The man at the boat inspection station and I watch this rainbow for a long time, both remarking that we have never seen one stick around this long. Although it grows shorter, it also grows brighter.

Black top camping versus boondocking also offers some guaranteed policing.  In these days of increasing crowds in boondocking areas, there is risk that you will end up with a 24/7 generator operator as your neighbor.  Or a drone flying over your bedroom window at 6:00am, as I had outside of Sedona.  At least in a campground, there is assurance of some semblance of an enforced quiet hour. 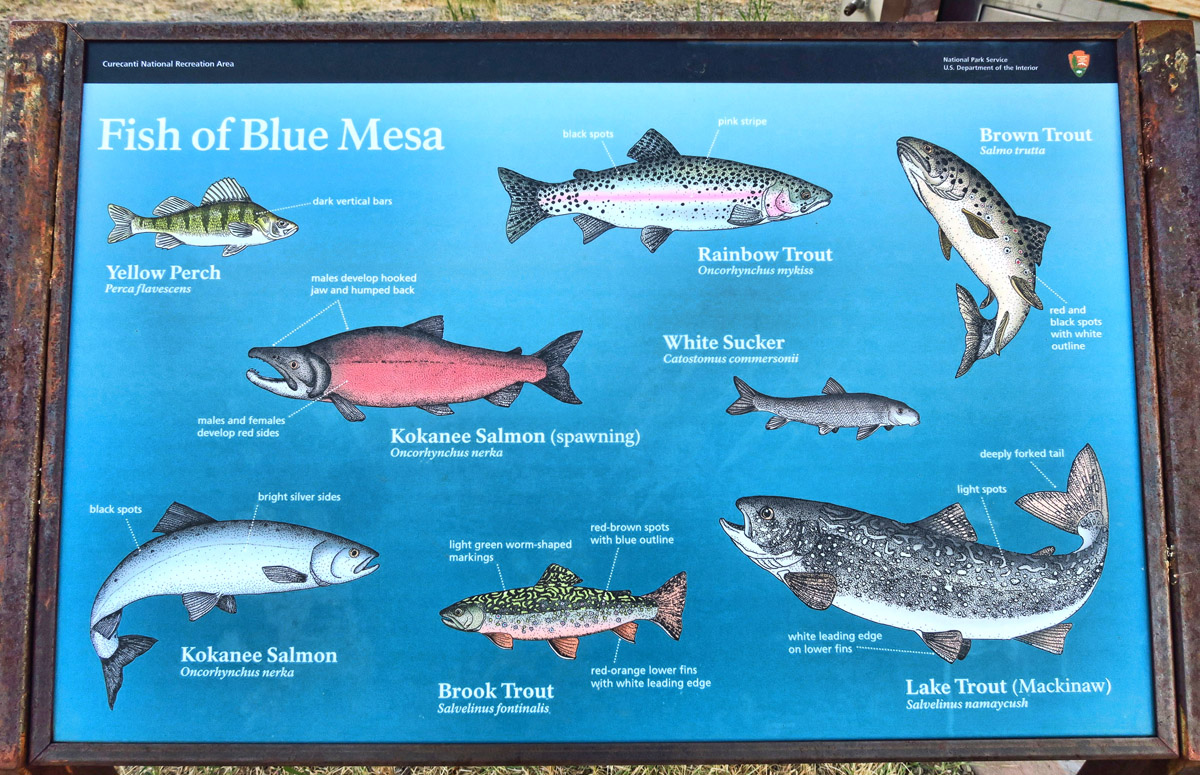 An amazing variety of fish are found in the Blue Mesa Reservoir. 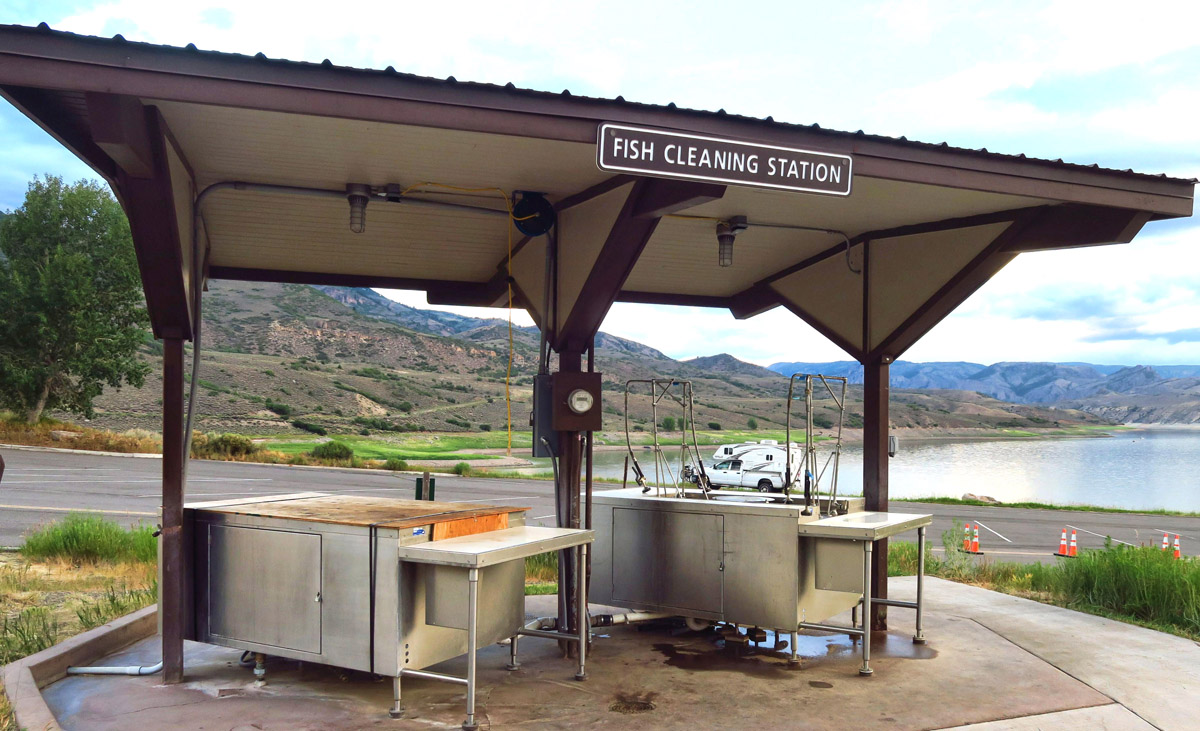 This is quite an elaborate fishing station, with motorized macerator. 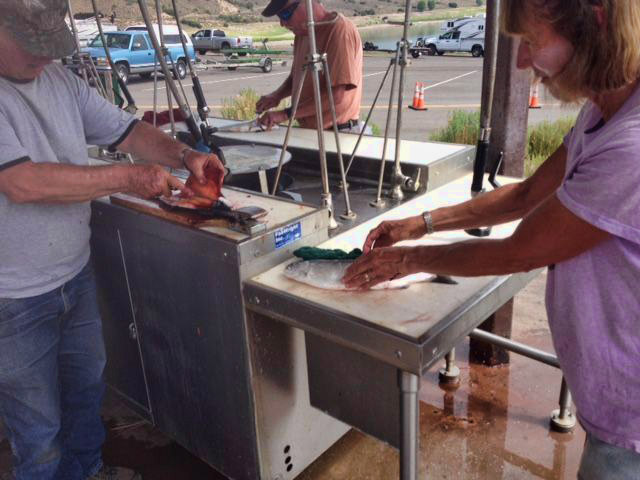 These lovely people caught their limit this day. 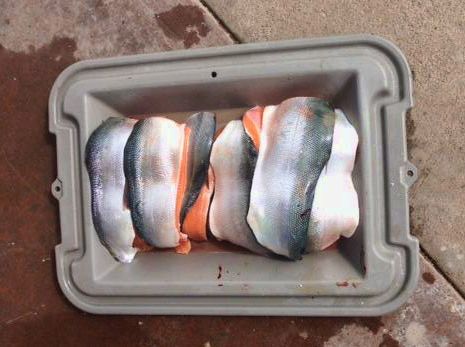 I lost my nerve and they finished up before I could ask if they would sell me a filet.

And lastly, should you find an asphalt parking area that offers camping, particularly fee-based camping, you can usually count on some kind of attraction nearby.  In this case, it’s access to the Blue Mesa Reservoir, Colorado’s largest body of water at 20 miles long with 96 miles of shoreline, and the state’s largest lake trout and Kokanee salmon fishery.  I loved walking down to the fish cleaning station every morning as the boats were coming in with their catch.  Fishing was good while I was there, though I never mustered the nerve to ask if anyone would sell me a salmon filet or two.  I did ask at the marina if this was common practice, but the volunteer teased me about being a “Black Market Fisherman” which made me lose my nerve. 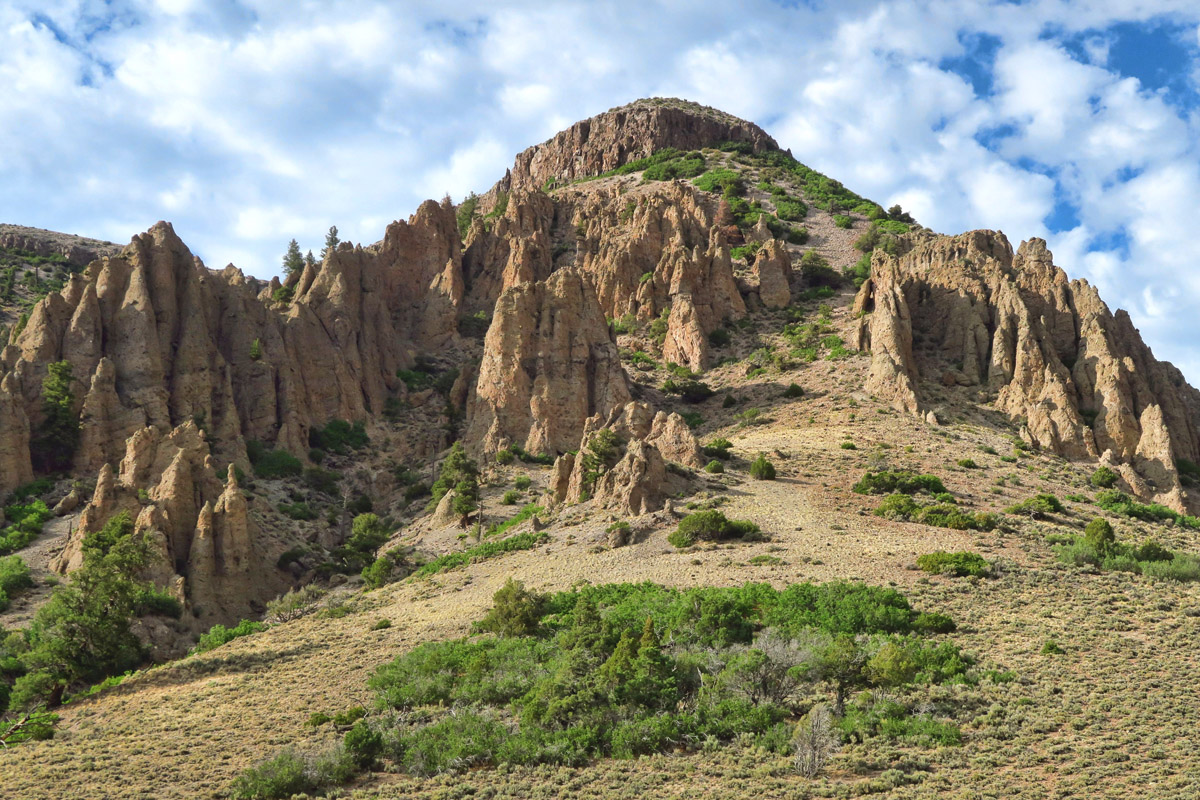 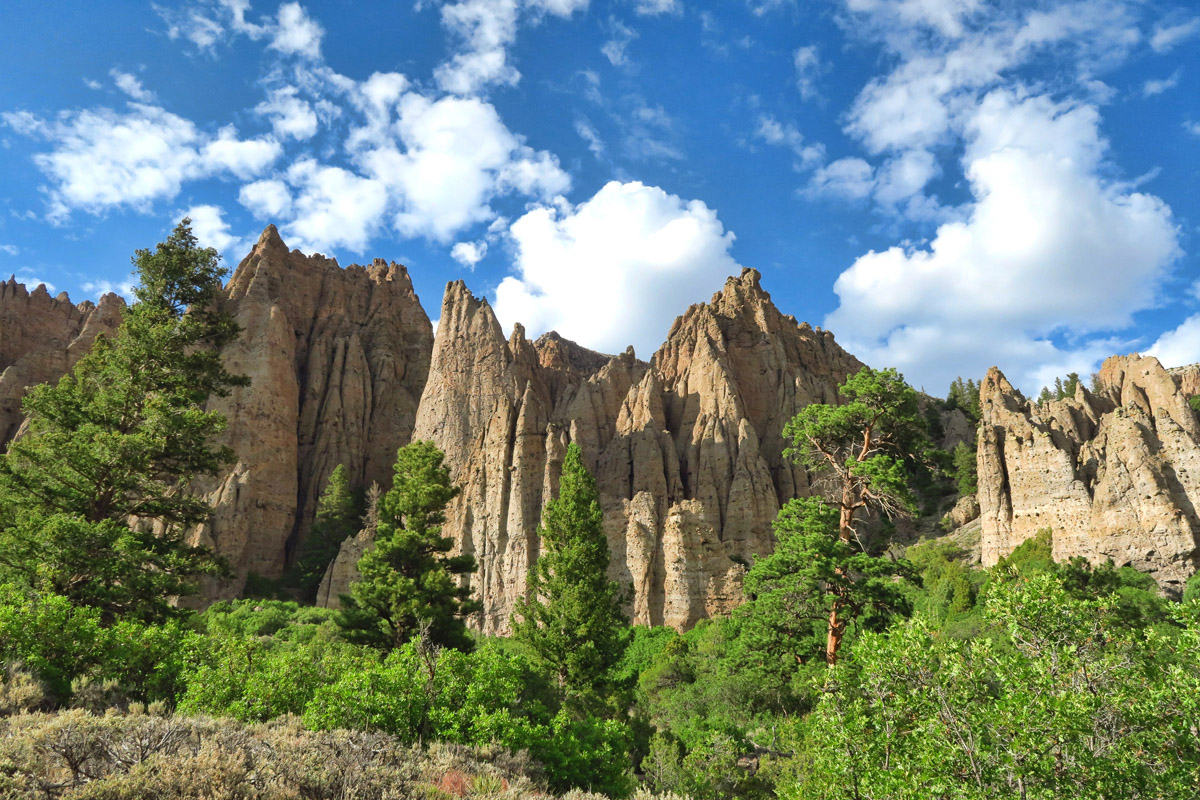 The pinnacles are made up of breccia, volcanic rock composed of smaller rocks, held together by volcanic ash. 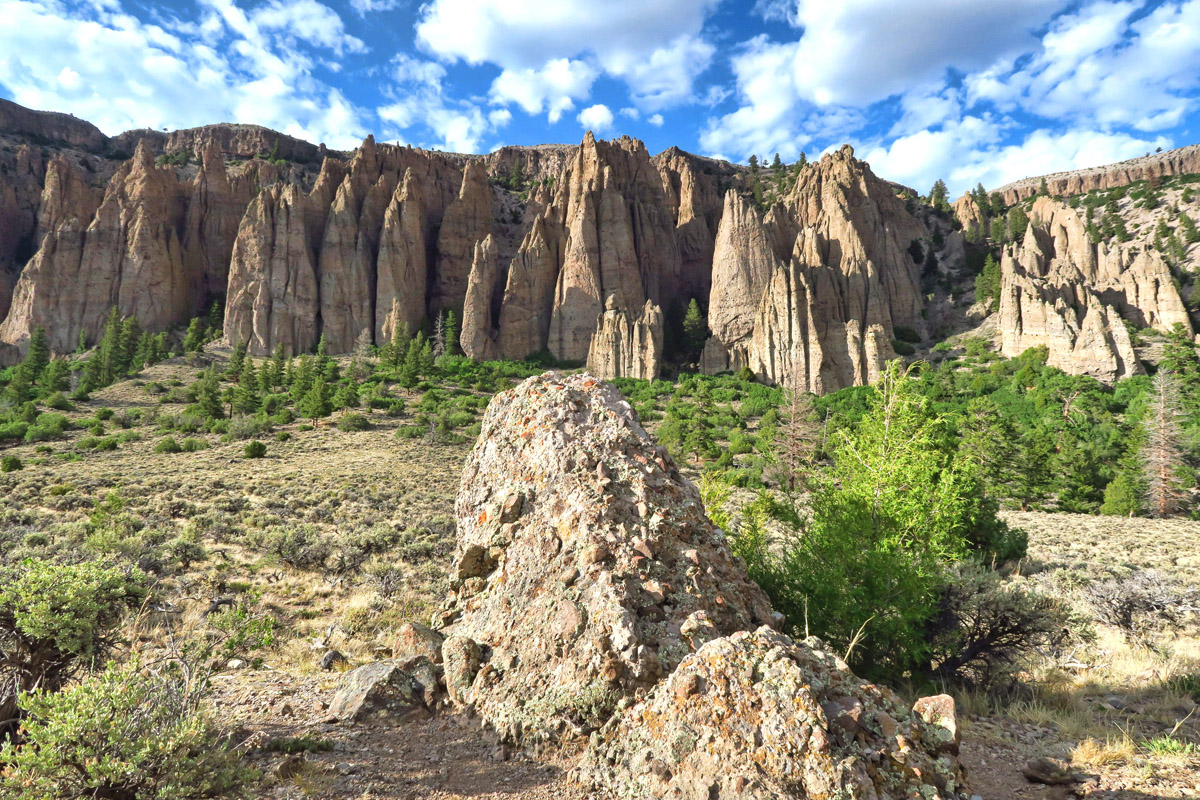 This is one of the pinnacles up close, an example of the effects of erosion, as stated by the kiosk next to it. 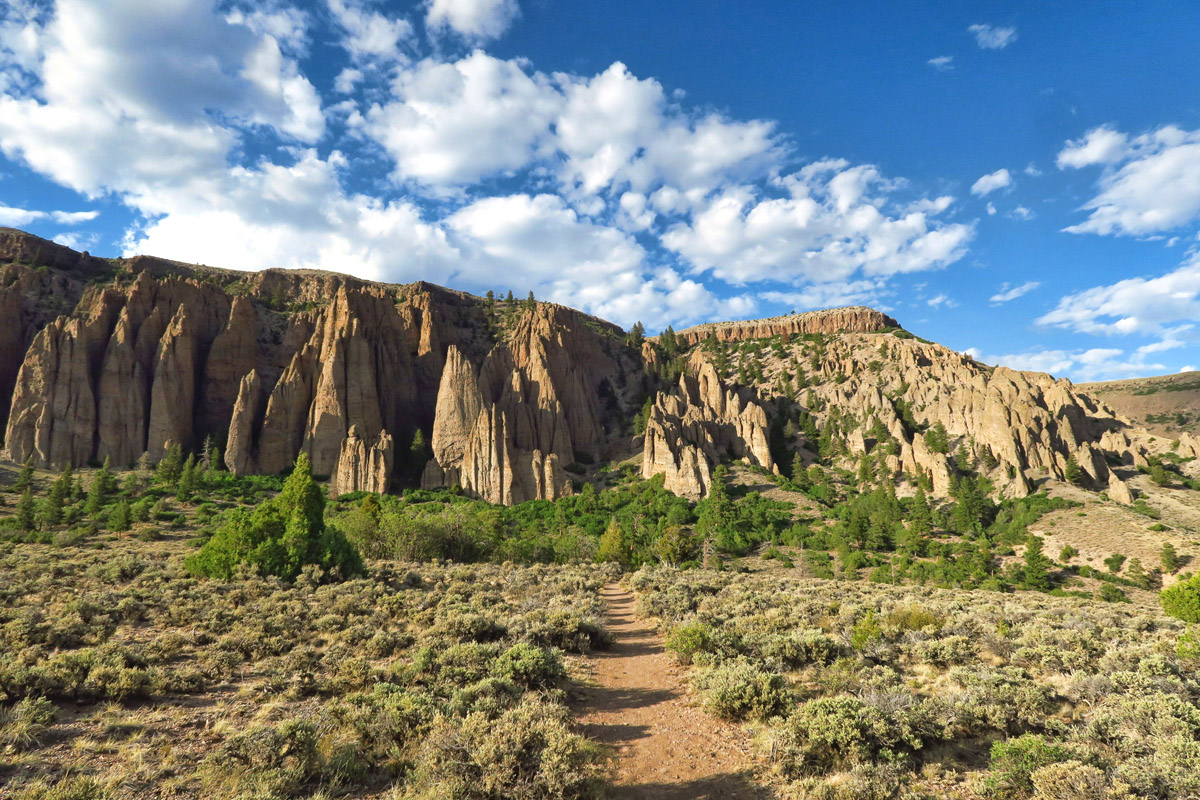 Unfortunately, I found these rocks on a climbers website, encouraging climbers to “Pony up!” I wish they would find something less susceptible to erosion to climb.

Located halfway between Montrose and Gunnison, there’s plenty to do here.  A couple of nice hikes in the area, the 1900 ft deep Black Canyon of the Gunnison National Park to explore, as well as the Morrow Point Boat Tour which I did back in 2015.

Though Blue Mesa is a popular destination for boating, I appreciate the fact that you can see the boats, but cannot hear them.  One would expect being this close to the lake, the roar of speedboats and jet skis would prove to be annoying.  But in fact, they were nowhere to be found.  Just pontoon boats and fishing boats, peacefully trolling about, moving on and off the lake with the wave of storm clouds.  I can’t figure out where all the speed demons were, not that I am complaining! Watching the boats without the roar of a motor made for zen-like viewing. 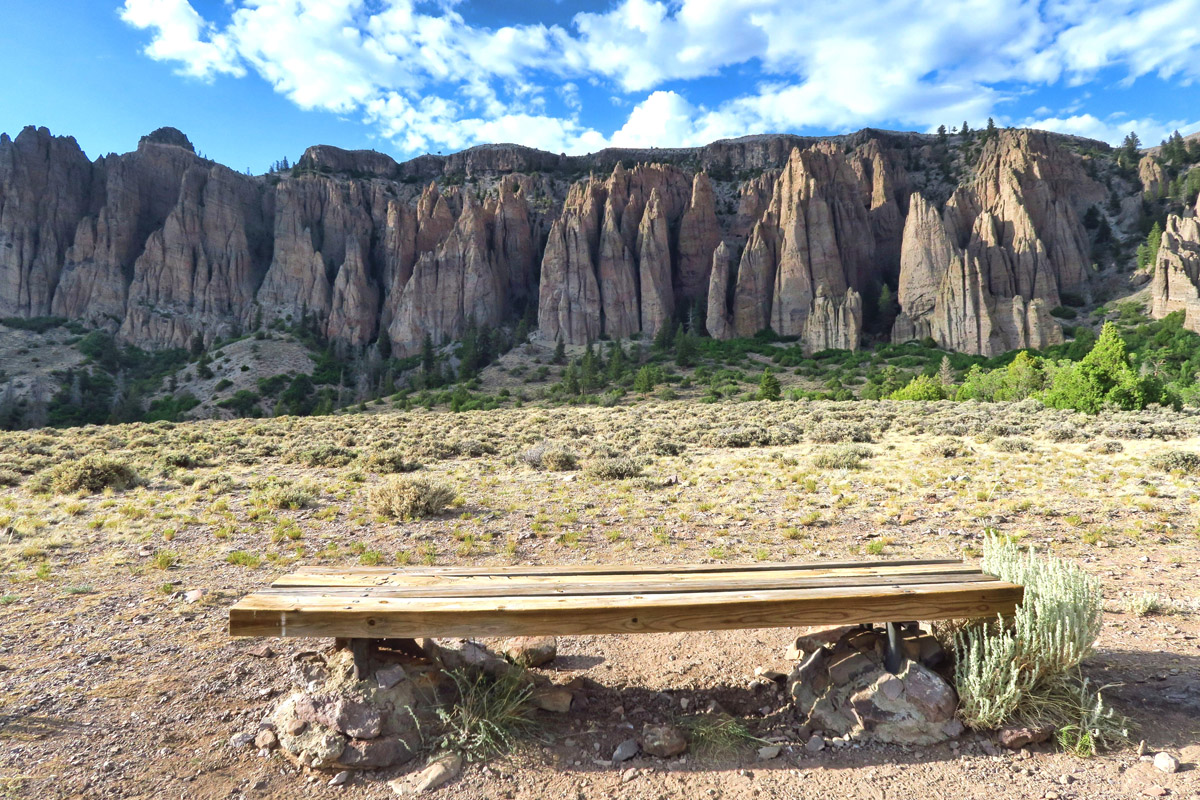 There are two views from this same bench. Looking forward, you get the Dillon Pinnacles. 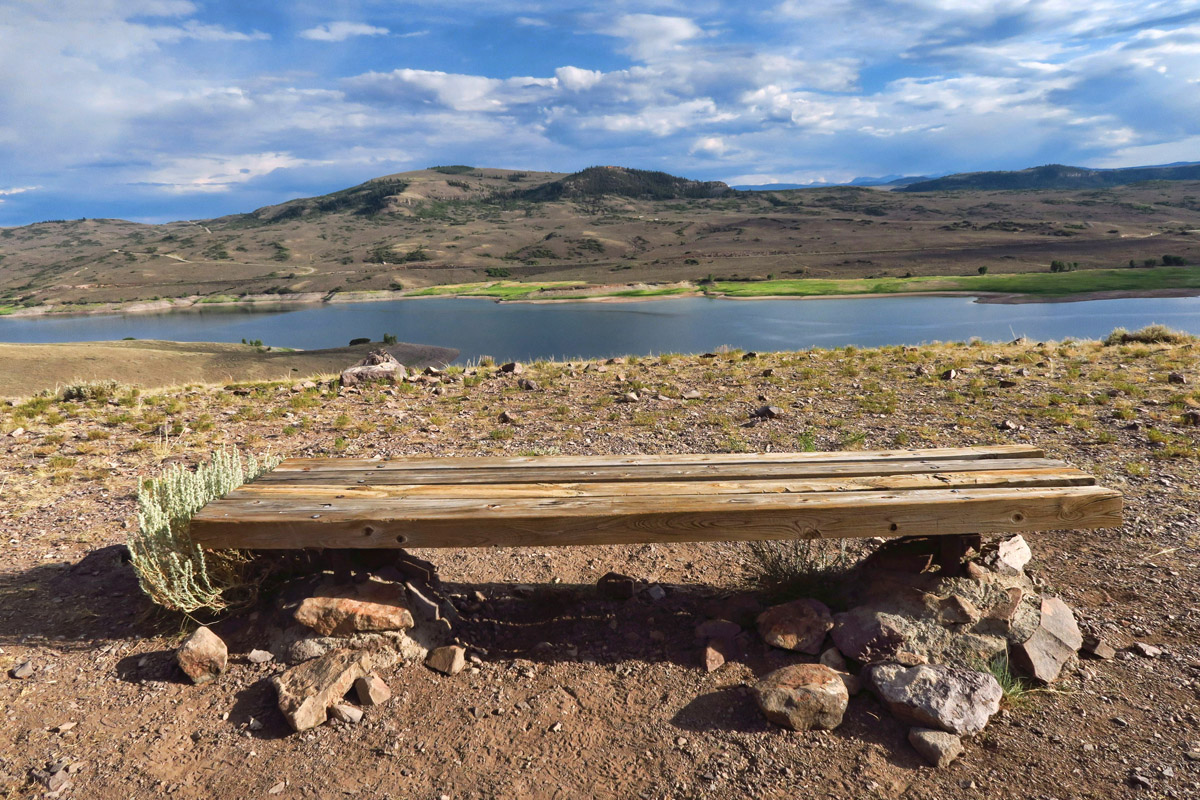 Turn around on the same bench, and this is the view you get of Blue Mesa Reservoir. 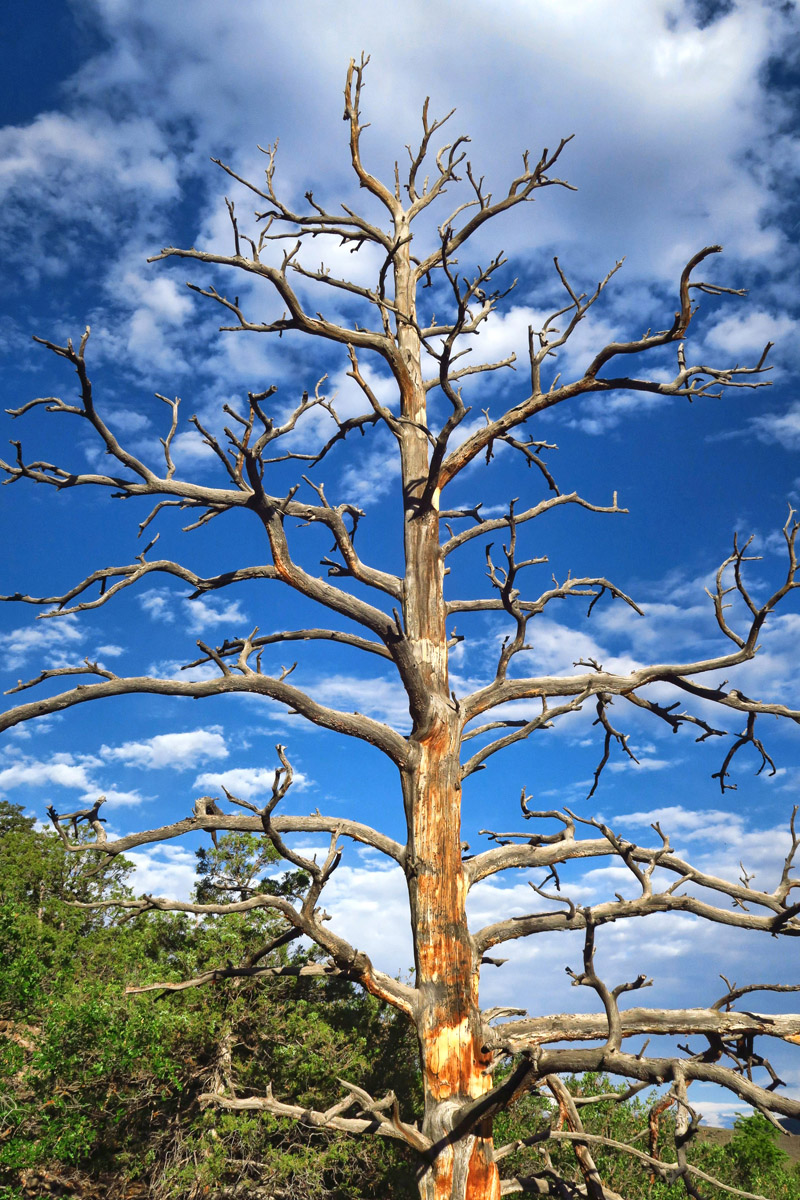 Dead or not, this is one beautiful tree!

Should you pass an asphalt parking spot, don’t judge the black top by its cover.  There might just be a Blue Mesa right beneath it.