I met my former husband, Scott, during the glory days of airline travel. I was in my late twenties, working for Braniff Airlines on the heels of deregulation. Having just added “International” to their name, Braniff was hiring entire graduating classes from the local airline reservations school. I shared a seniority date with fifty people all hired on the same day. They were gobbling up international routes faster than the cryptic computer system, PARS, could keep pace. As they assumed routes of failing airlines like Pan Am, new cities would be added daily. As Reservation Agents, we were given copies of the full page ads from the Dallas Morning News so we could answer the question, “Do you fly to Amsterdam?…to Zurich, etc.?”

It was the most wild and crazy, fun time of my life. Airline passes were $14 for coach, $28 for First Class to any place we wanted to go, as long as we were willing to “dress up,” as non-rev travel had a strict dress code. During those days, First Class meant free-flowing champagne, silver service, caviar, Beef Wellington, and Baked Alaska for dessert, all with unlimited alcohol to accompany each course. Flying to a destination for dinner was cheaper than going out.

In a Reservation Center of over 600, I got lucky to be pulled for the small “Special Services” team, which performed manual tasks not yet automated like seat assignment abd ticket by mail. We were the conduit between a manual process and automation for functions such as Flight Advisory, which involved ripping off yellow slips of paper from the teletype machine and updating the reservation system with flight delays.

Our small group sat in pods of four all facing the center, while working the evening shift, 3:30pm to midnight. Our “lunch break” fell during the typical dinner hour. It was not considered bad form back in the early eighties to have one or two cocktails with dinner while on the job, so work was like a party every night. I have never been closer to a team of colleagues than I was during those days. We worked hard and we played hard. Scott was my “pod-mate,” and although we didn’t date at the time, he was my closest confidant and best friend. 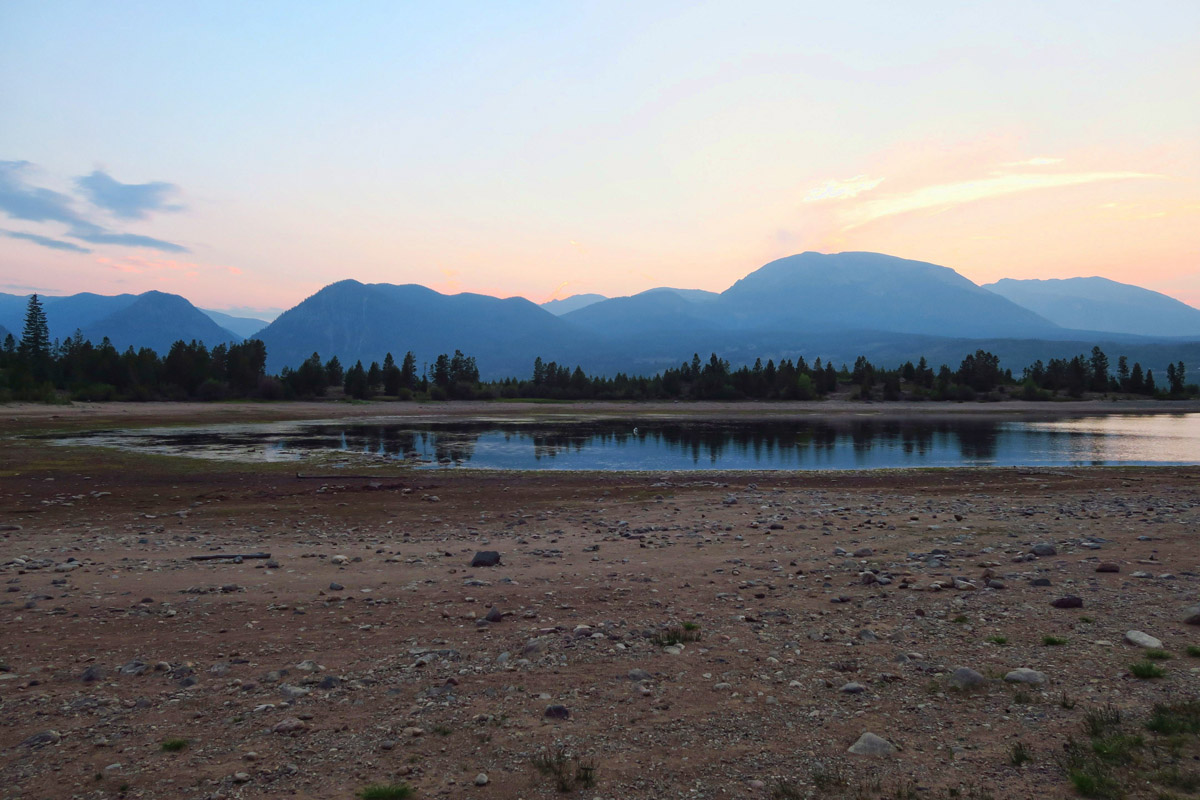 This is Dillon Reservoir from my parking space in Frisco’s Pine Cove CG. Jim and Gayle of Little Adventures stayed in this same spot last year and had “waterfront property.” 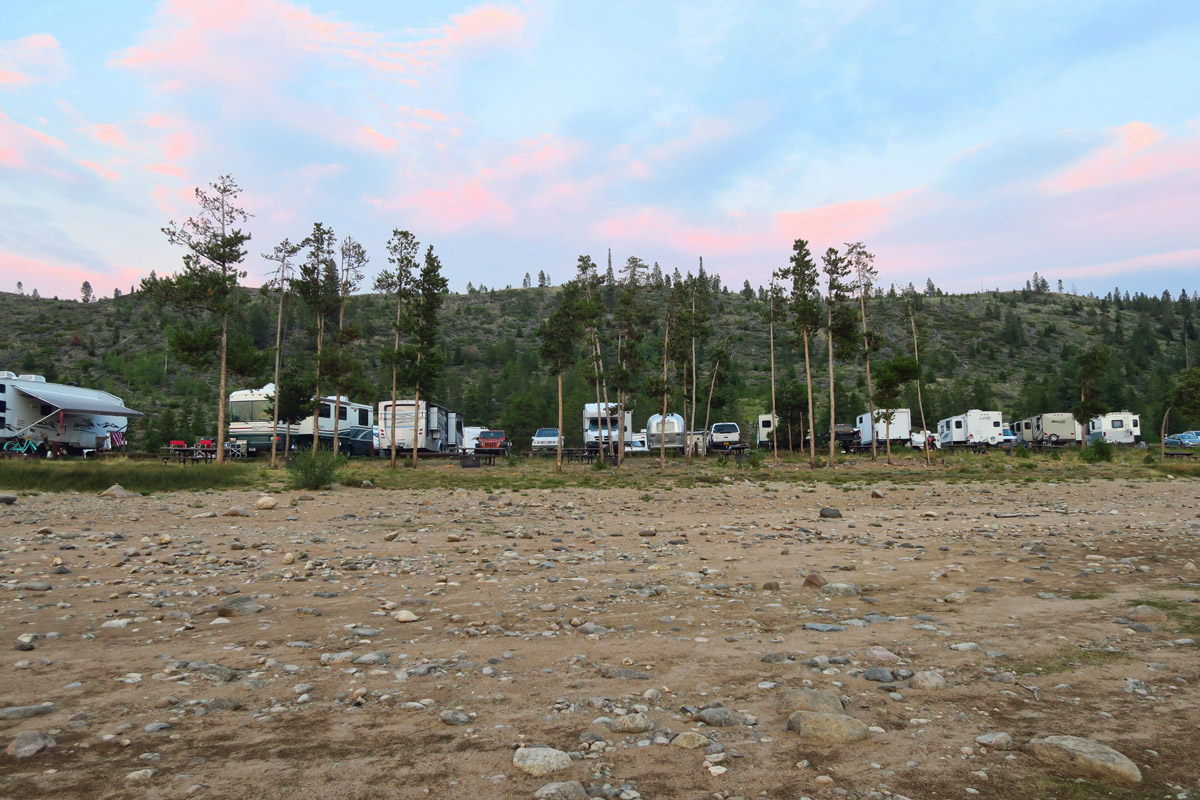 This is how far the water is now from the water’s edge campground. 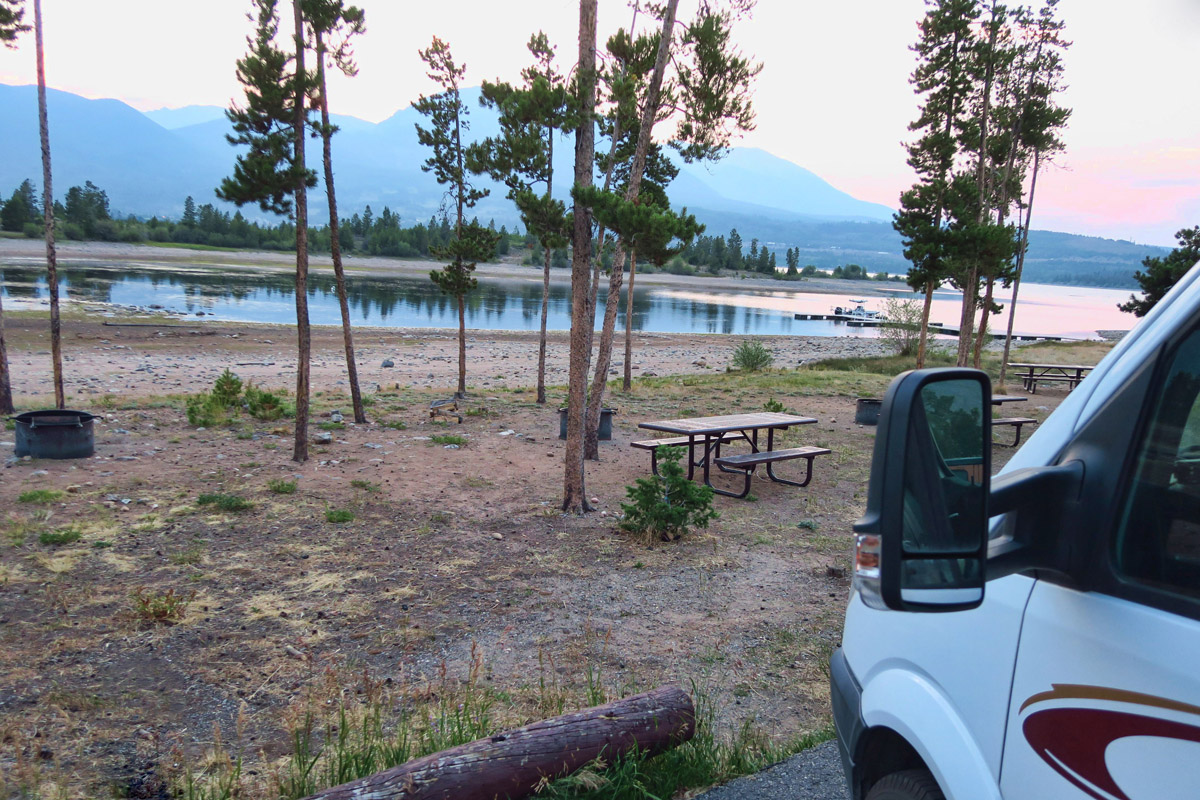 At least it keeps the picnickers away from the picnic tables! 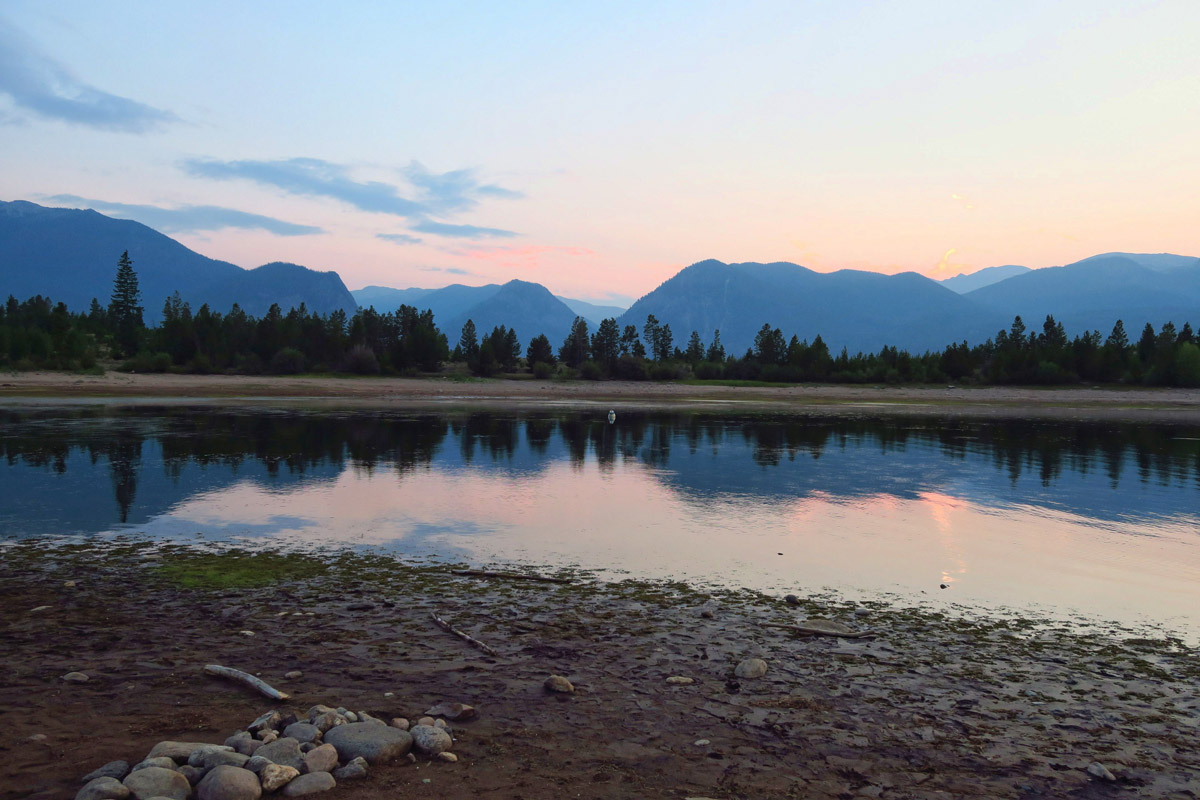 It’s tough not to feel despair when looking out over the low water levels and smoke-filled skies…hoping it’s not a sign of the times.

But what goes up must come down, as happened on May 12, 1982. Braniff filed for bankruptcy, ceasing all operations. All planes were grounded. I was in Orlando at the time, and learned of my unemployment on the six o’clock news. I can still recall the image of the TV in the hotel room as I came out of the shower wrapped in a towel to the news “Braniff International Airlines filed for Chapter 11 today,” ceasing all operations and ending 56 years of service. In one day, I lost my ride home, my job, my travel habit, and my entire social community. My work friends were my only friends.

Scott and I formed a bond in the aftermath, as we both stood on the unemployment line in a market now saturated with 600 people with our same skill set. It was a struggle. Not only had the “air” gone out of our careers, it had also gone out of our relationship. So what did we do? We got married. It didn’t take long to realize “for all the wrong reasons,” it just took me eight years to get up the courage to do something about it. For all the fun we once had, I joked that when we said “I do,” Scott said “I don’t anymore.”

Turns out, once we weren’t flying the friendly skies and cracking jokes over El Fenix margaritas every night at dinner, we didn’t have all that much in common. Except for one thing….our mutual love of snow skiing. Every year, we would take not just one but sometimes two trips to go skiing in Colorado’s “Ski the Summit” area (Breckenridge, Keystone, Copper Mountain, and A-Basin) basing ourselves in Breckenridge for the week.  It had become a tradition, to the point when talk of the inevitable D-word finally came to a head, Scott’s greatest concern was “Who will I go skiing with now?”

As bizarre as it seemed then and now, we took a ski trip together after we were divorced. While on the trip, I kept waking up from the recurring dream each night that we were still married, and the divorce had only been a dream. It was my last time to see or hear from Scott with the exception of the final dinner where I broke the news that I was moving to Manhattan, to which he replied, “I give it a year before you’re back.” 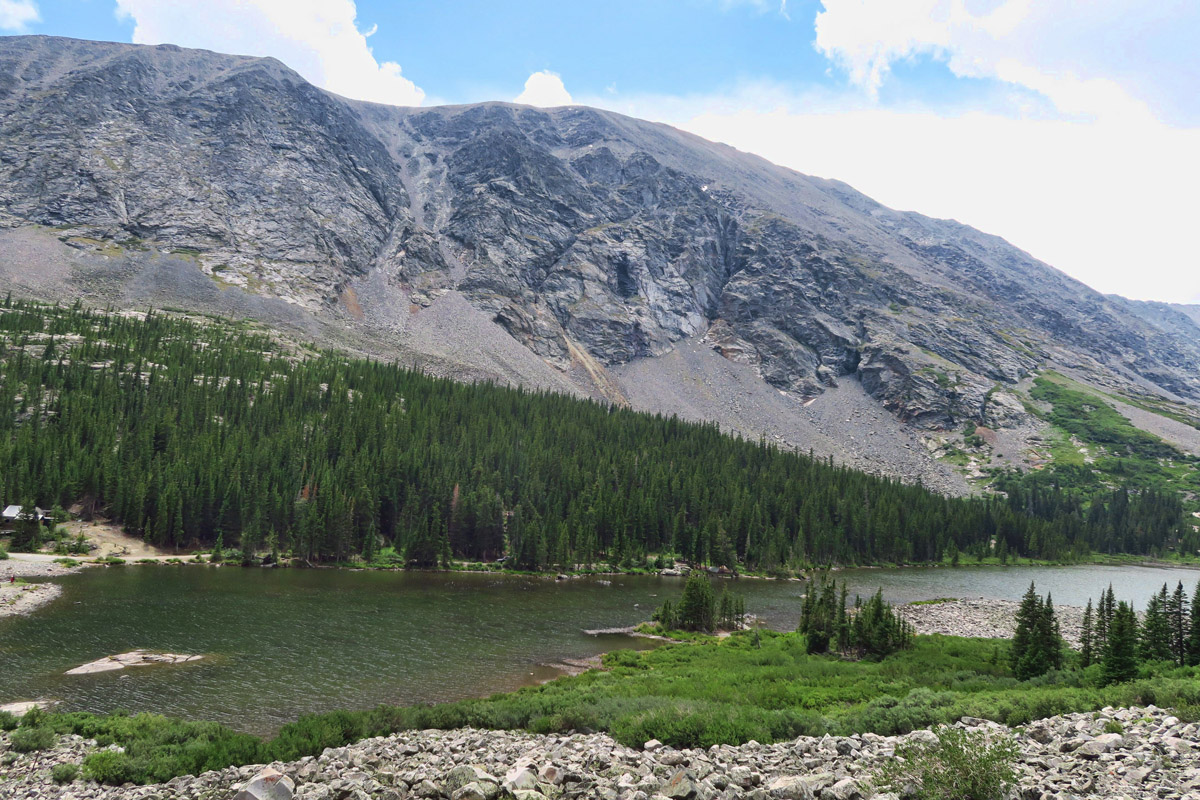 Blue Lakes area just outside of Breckenridge features two beautiful lakes with a waterfall in between. 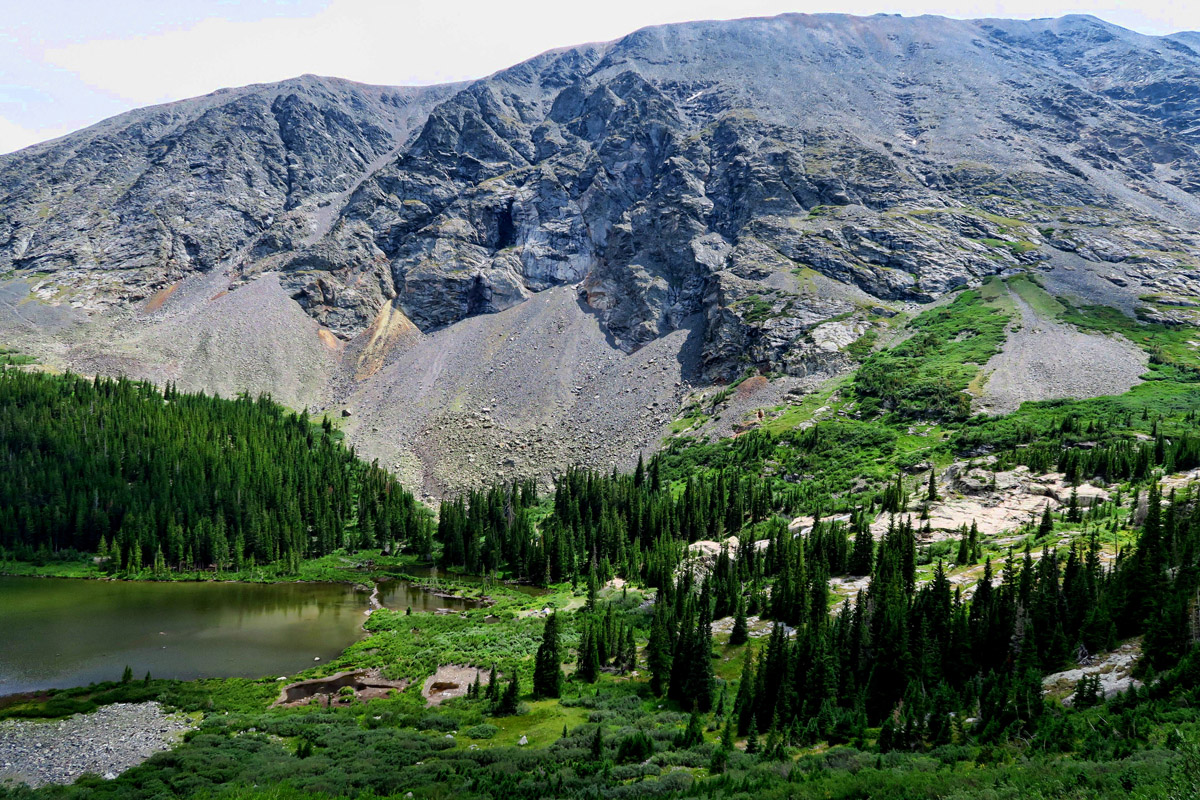 Difficult to see the large waterfall on the other side of the trees, but you can hear it from here. 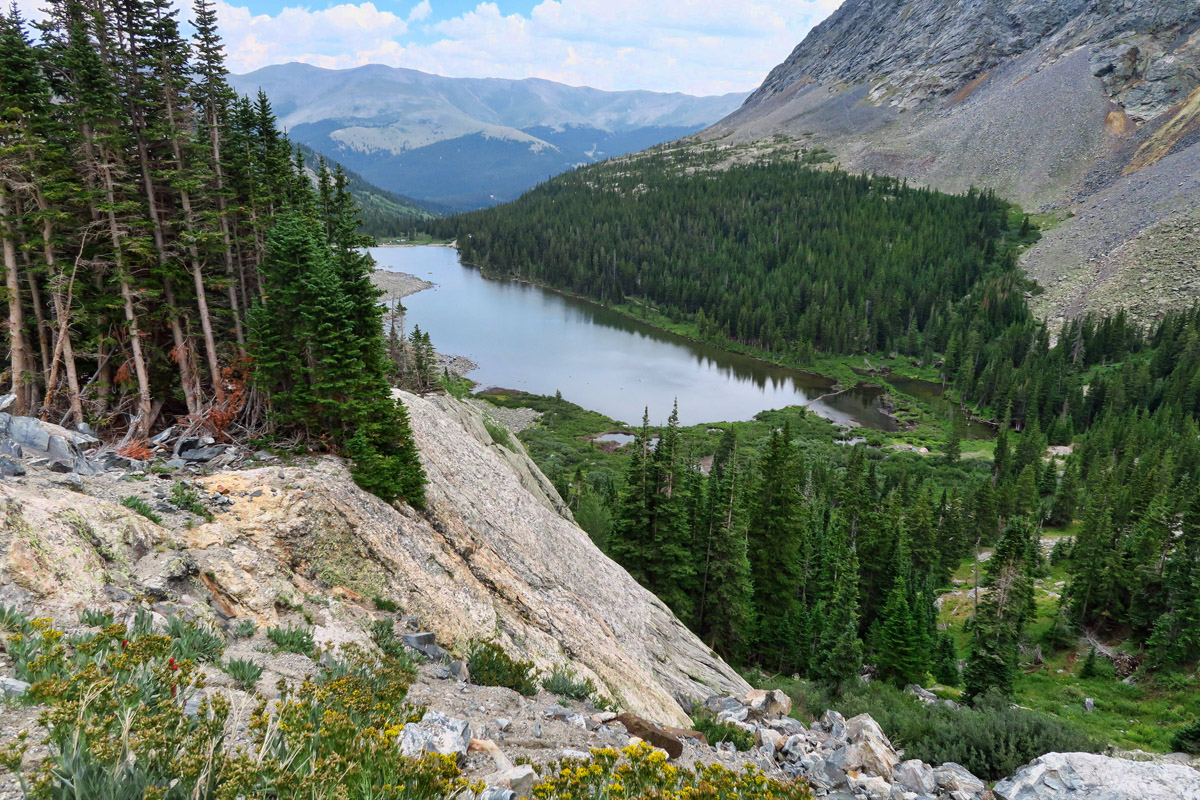 This is “Lower Blue Lake.” 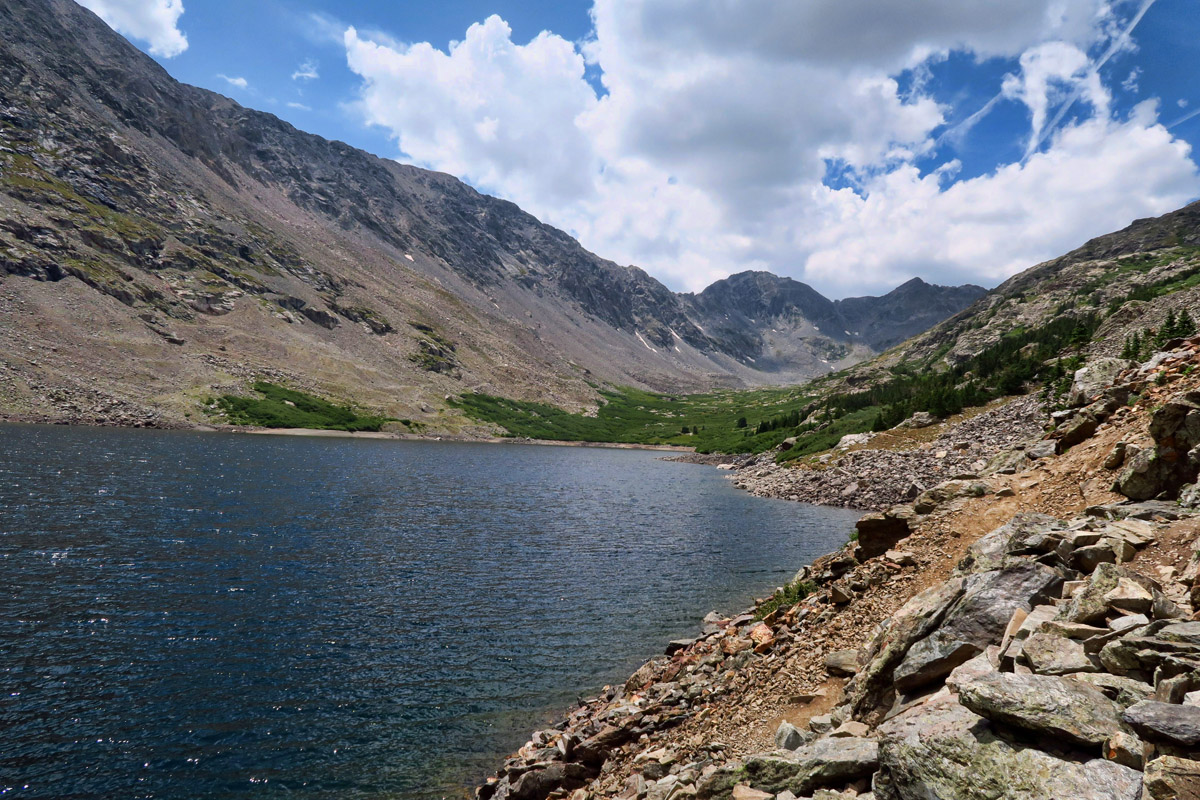 This is “Upper Blue Lake.” Supposedly there is a third lake, though I never found it. 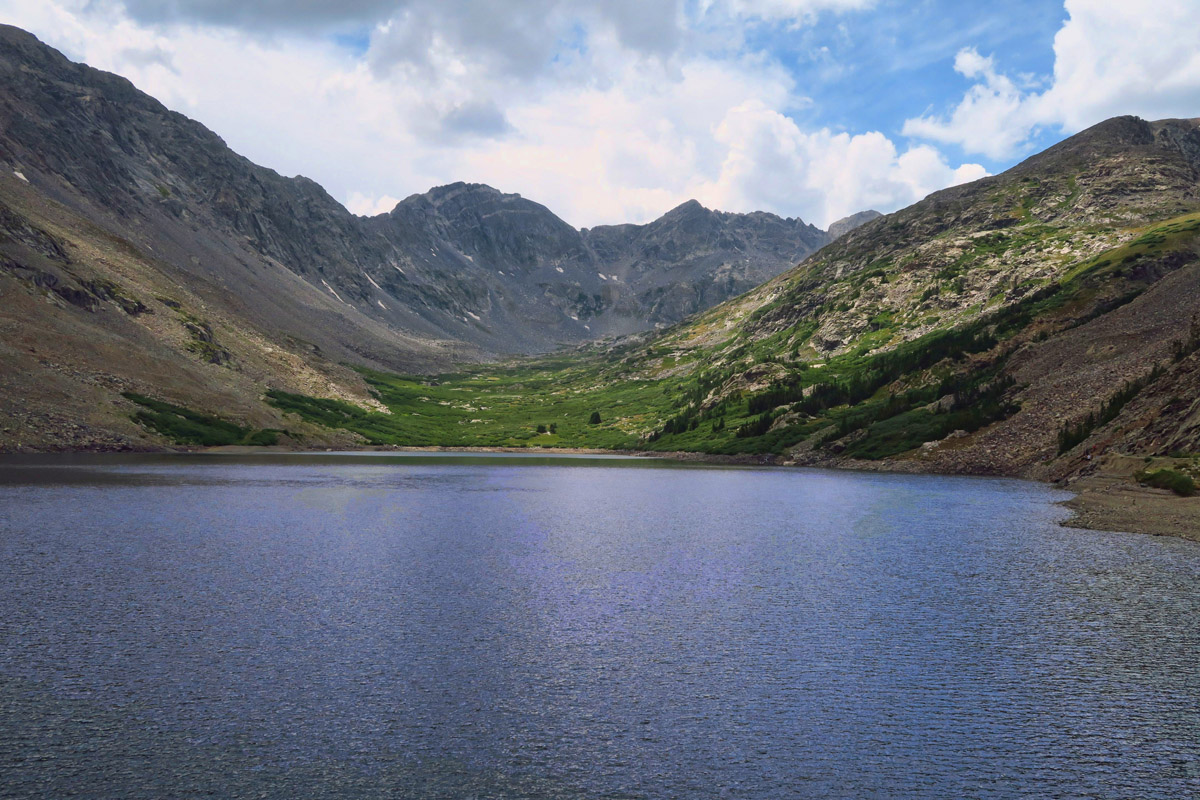 More views of Upper Blue Lake outside of Breckenridge. 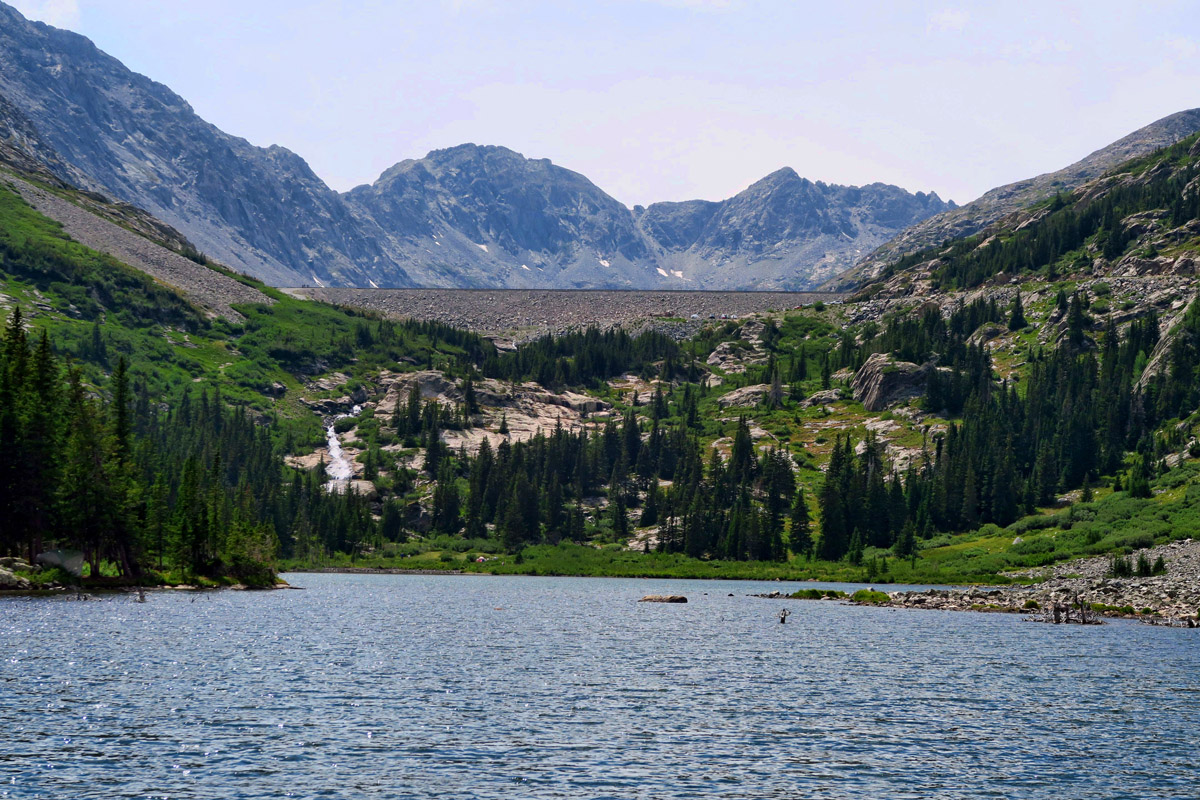 Horizontal line two thirds up the photo is the dam that separates the two lakes. 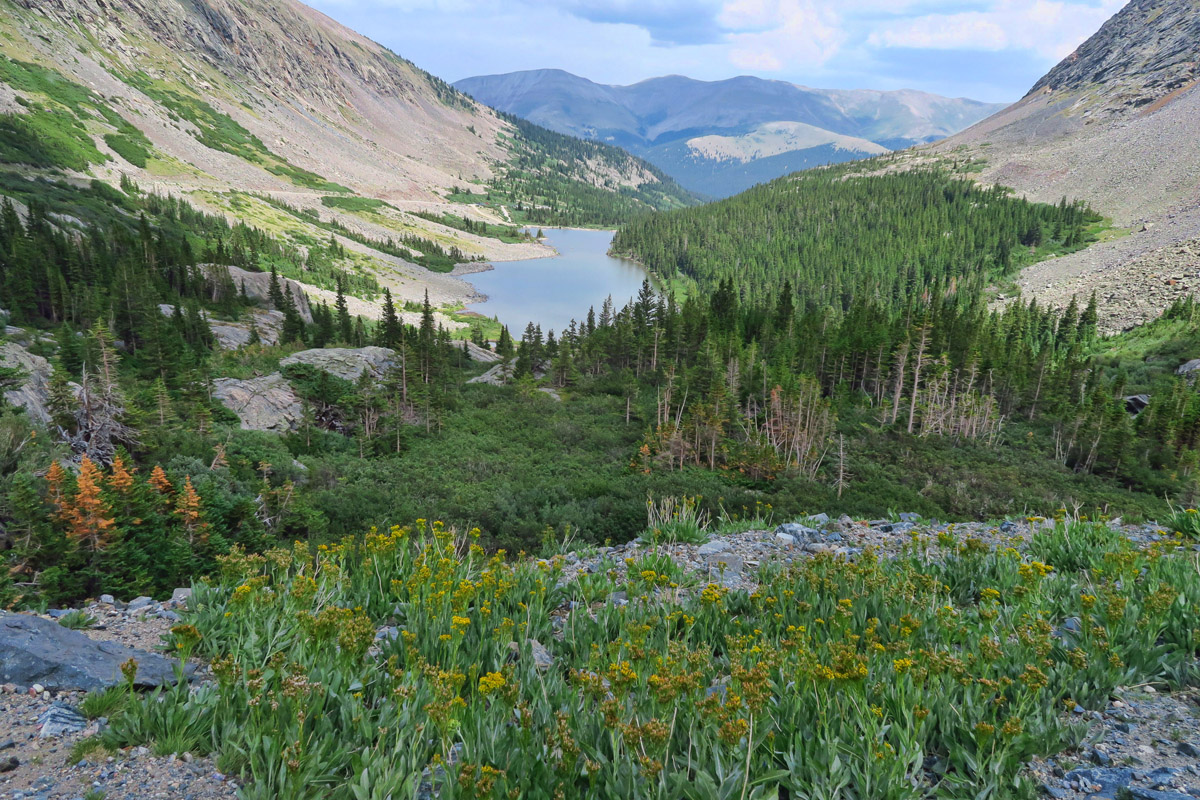 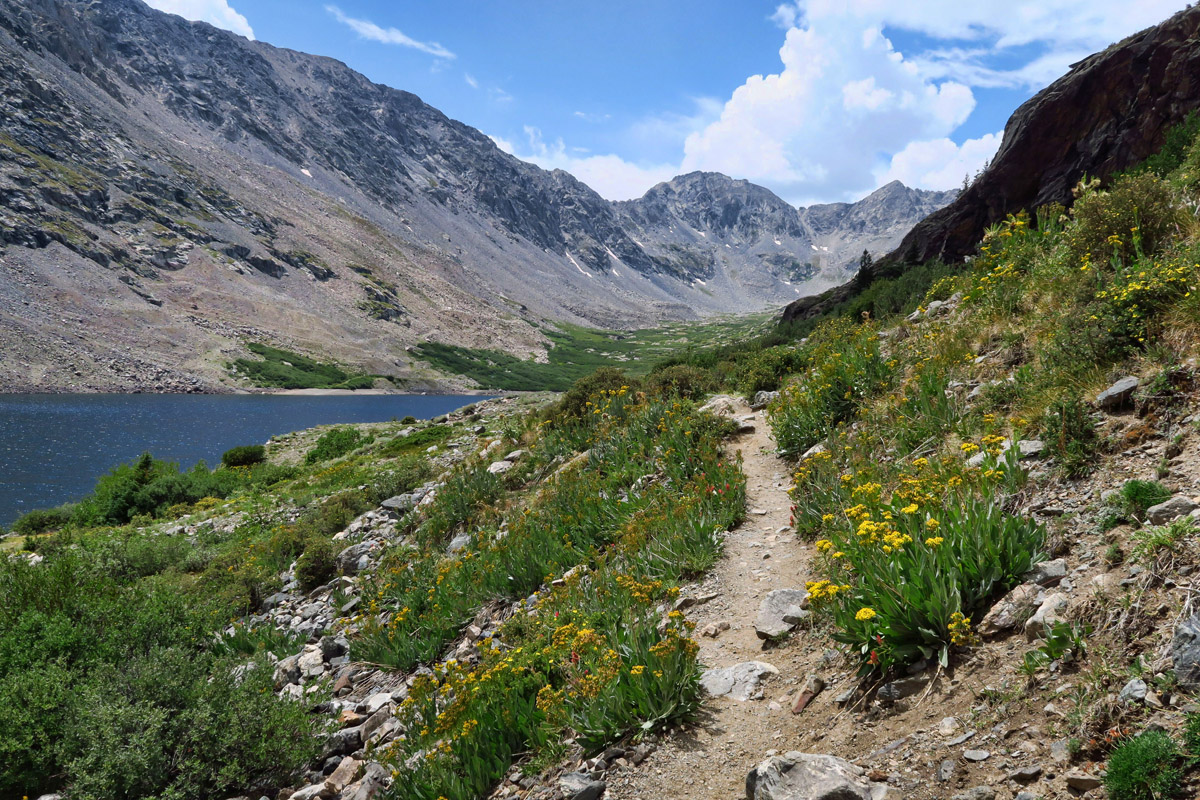 I missed the well disguised turn-off for the trail that went up through the willows and over the giant rock piles, so I eventually ran out of trail at the backside of the lake. 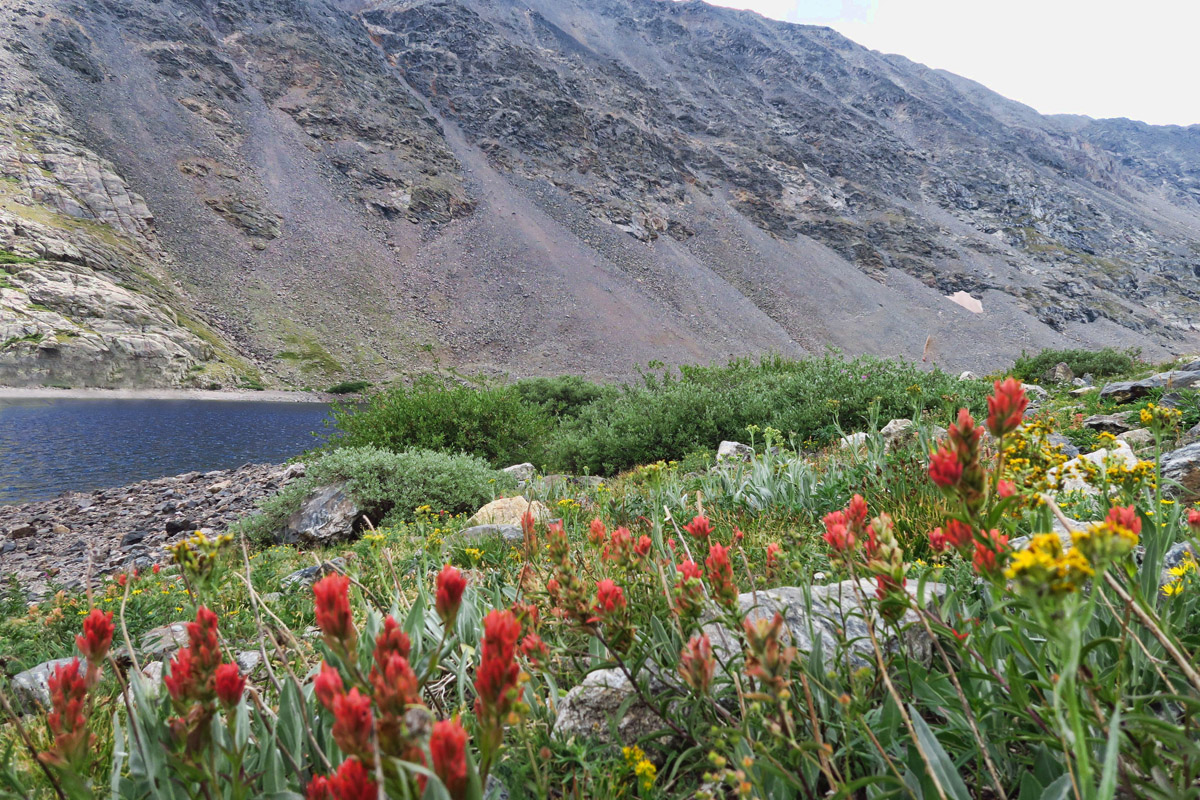 Although I missed the cut-off, it was still a beautiful trail, albeit way too short.

This was my first time back to Summit County in Colorado since those days with Scott in the late eighties. I based myself in Frisco along the Dillon Reservoir, the hub of the “Ski the Summit” area. I was looking forward to returning to Breckenridge to revisit all the old haunts and see those familiar gathering places at the base of the mountain.

Except nothing looked familiar. I couldn’t find the lifts, the bars, our old après-ski hangouts. Even the parking lot, now with it’s plethora of “Pay to Park” posts didn’t look the same.  And the crushing blow, the old rustic A-frame cabin that we rented each year and considered our “winter home” was gone. Along the ridge overlooking the fancy landscaped new four lane round-abouts was now a row of million dollar homes. I couldn’t recognize a single thing.

The old adage “You can’t go home again,” got to be an adage for a reason.  We all know that. Yet still we are compelled to try… 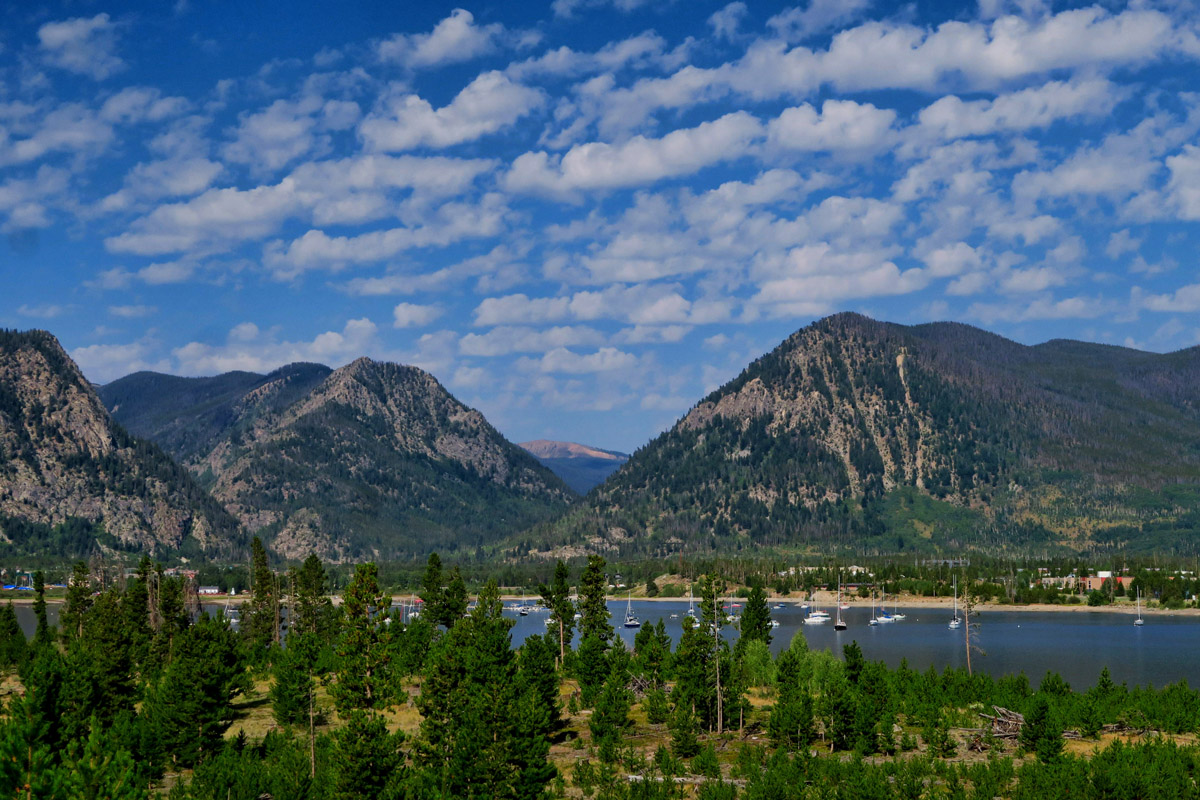 View of Frisco from hiking trails above campground. 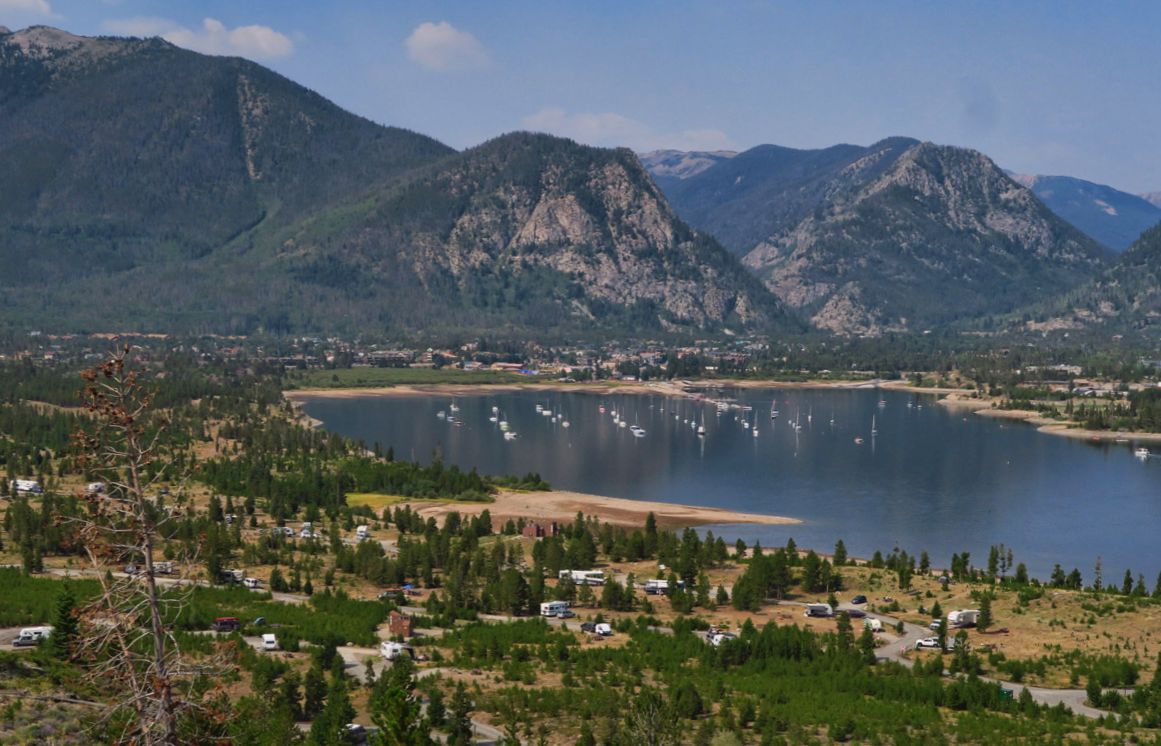 Weird smoky haze hung over the reservoir causing photos to have a weird pink hue. 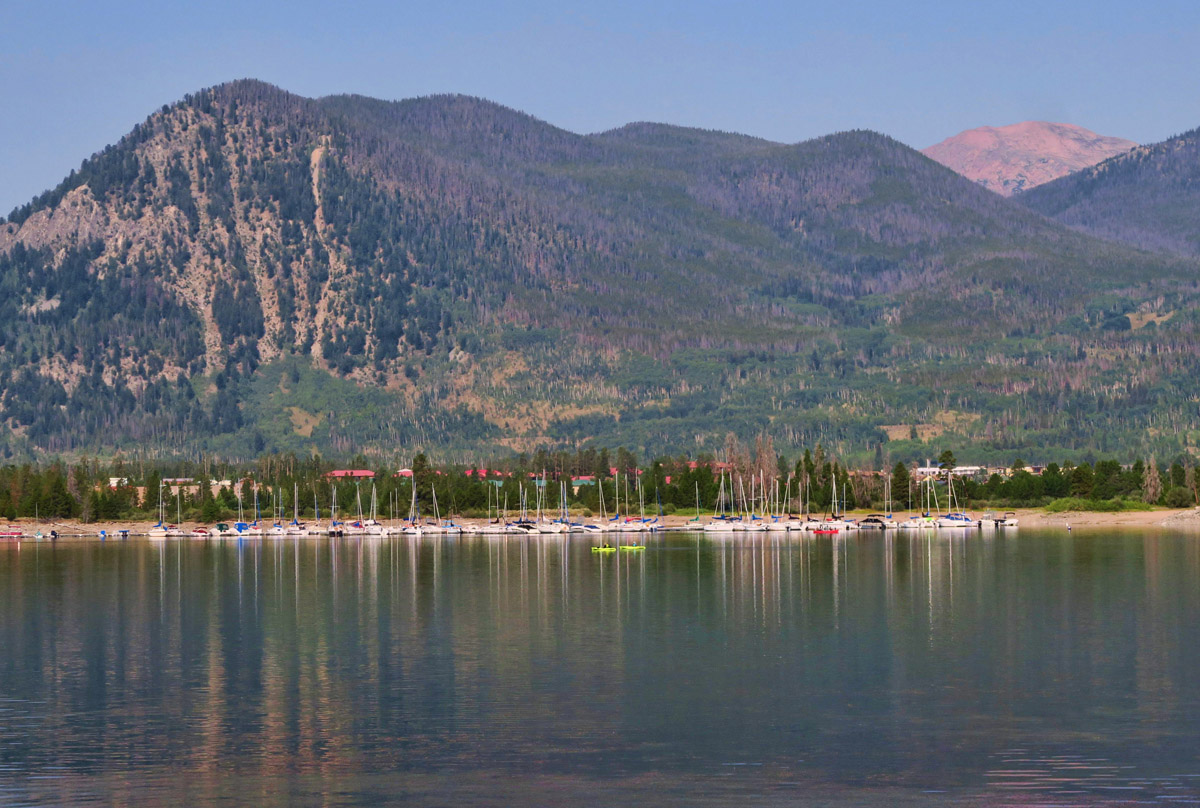 I am certain my mood would have improved greatly had I been able to hitch a ride on one of these sailboats. 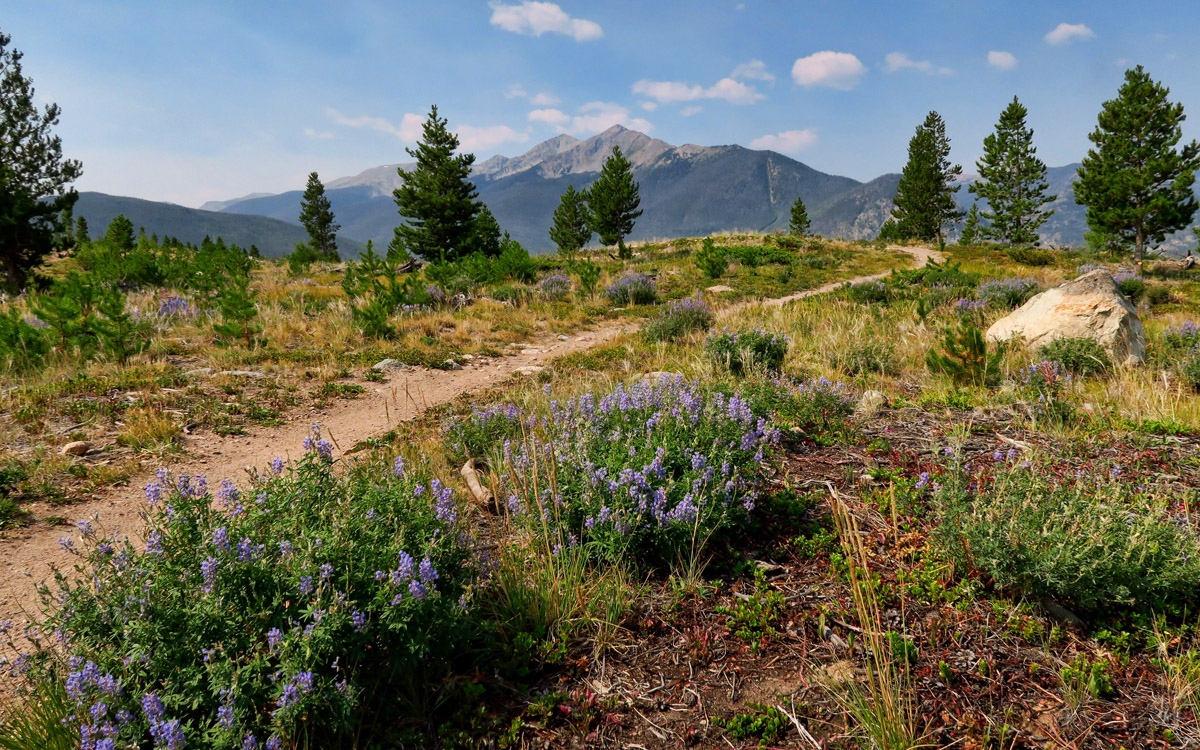 There were some lovely meandering hiking trails in the Frisco Adventure Park. 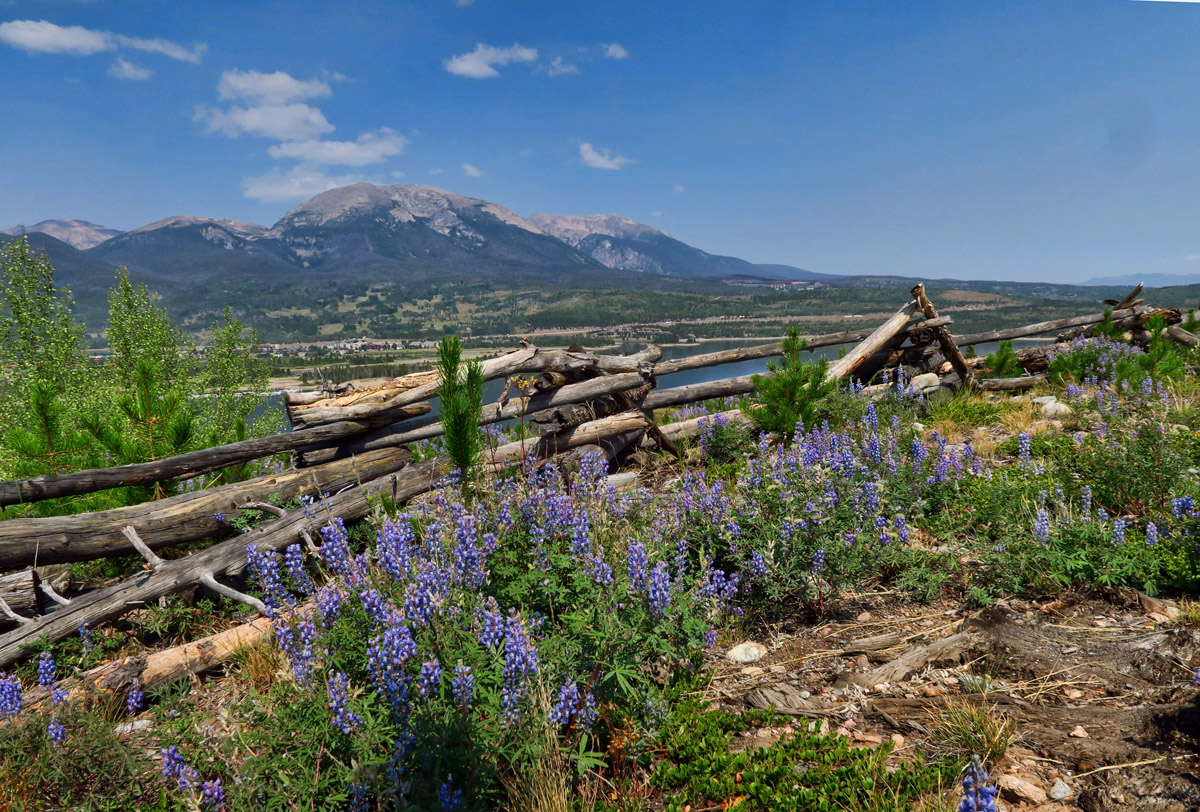 Whatever this small blue flower is, it’s blooming all over the hills. 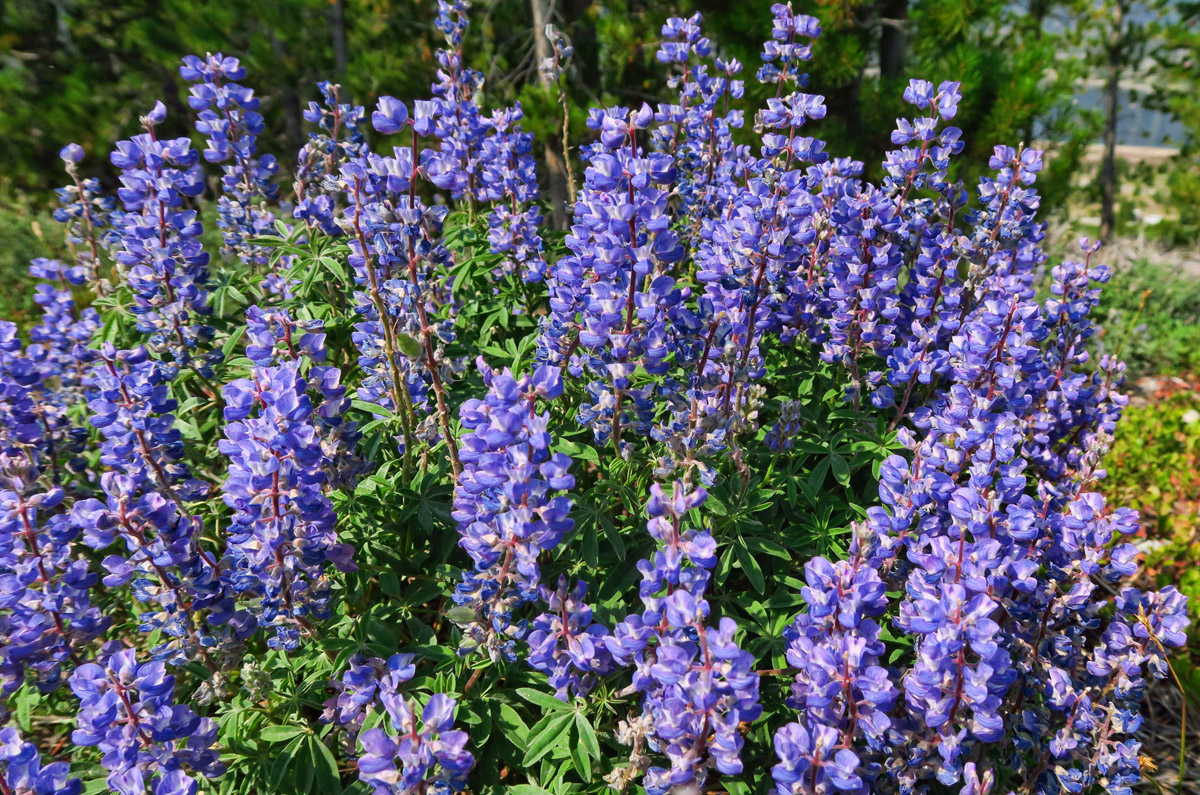 Lupine? Though it looks way too small to be lupine. 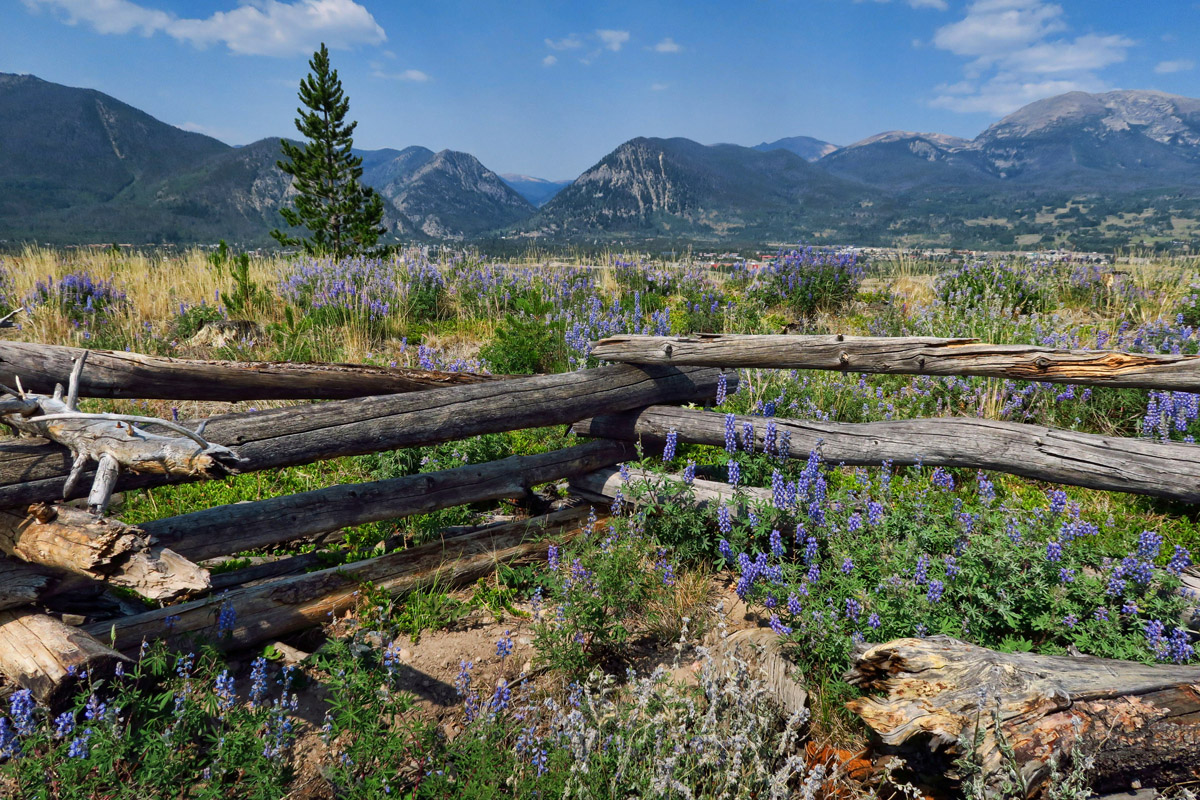