I often say that having a goal, or the over-used term “bucket list” is a means to an end to aid in fulfillment of the old adage, “It’s the journey, not the destination.” If I did not have the goal to see all the national parks in the US, why on earth would I make the journey to North Dakota? Without Theodore Roosevelt National Park in my sights as my 48th national park with a capital “P,” there would be no reason to come to North Dakota. And with that, let me just say that there is no other reason that I see to come to North Dakota! 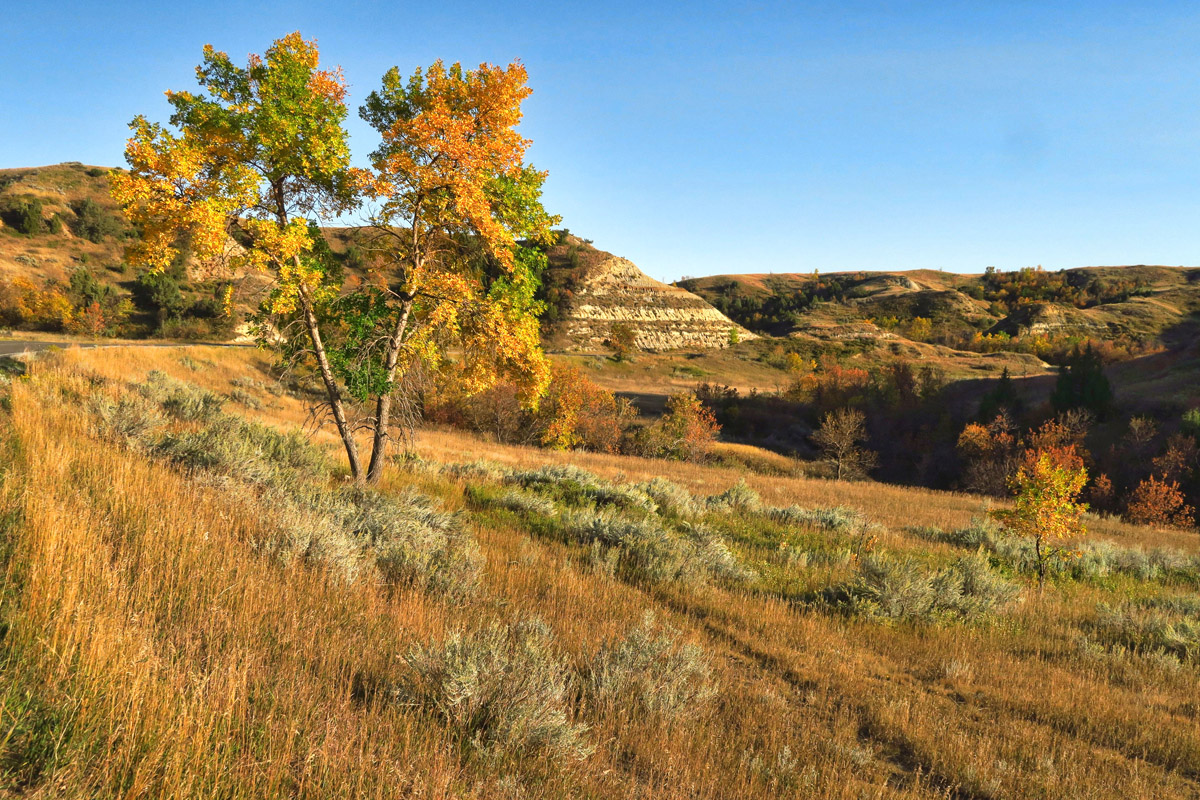 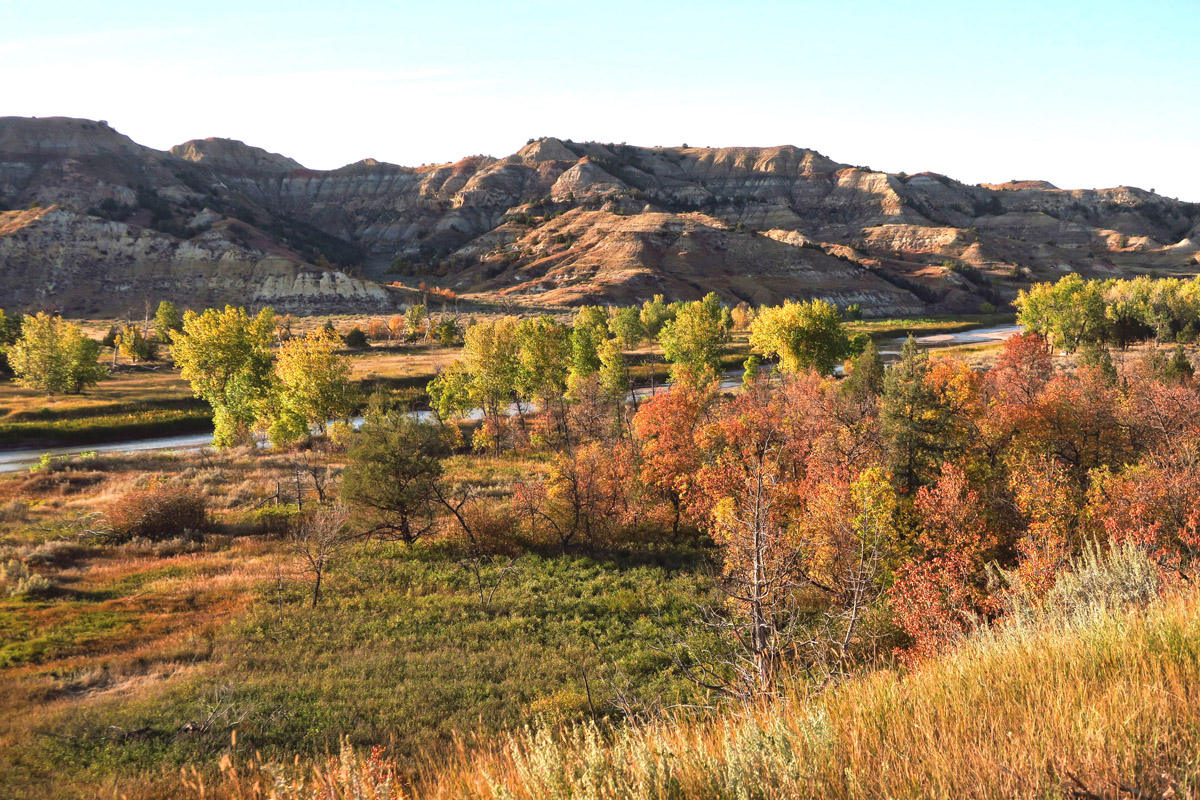 Cottonwood Campground gets its name for the beautiful groves of cottonwood trees growing along the Little Missouri River. 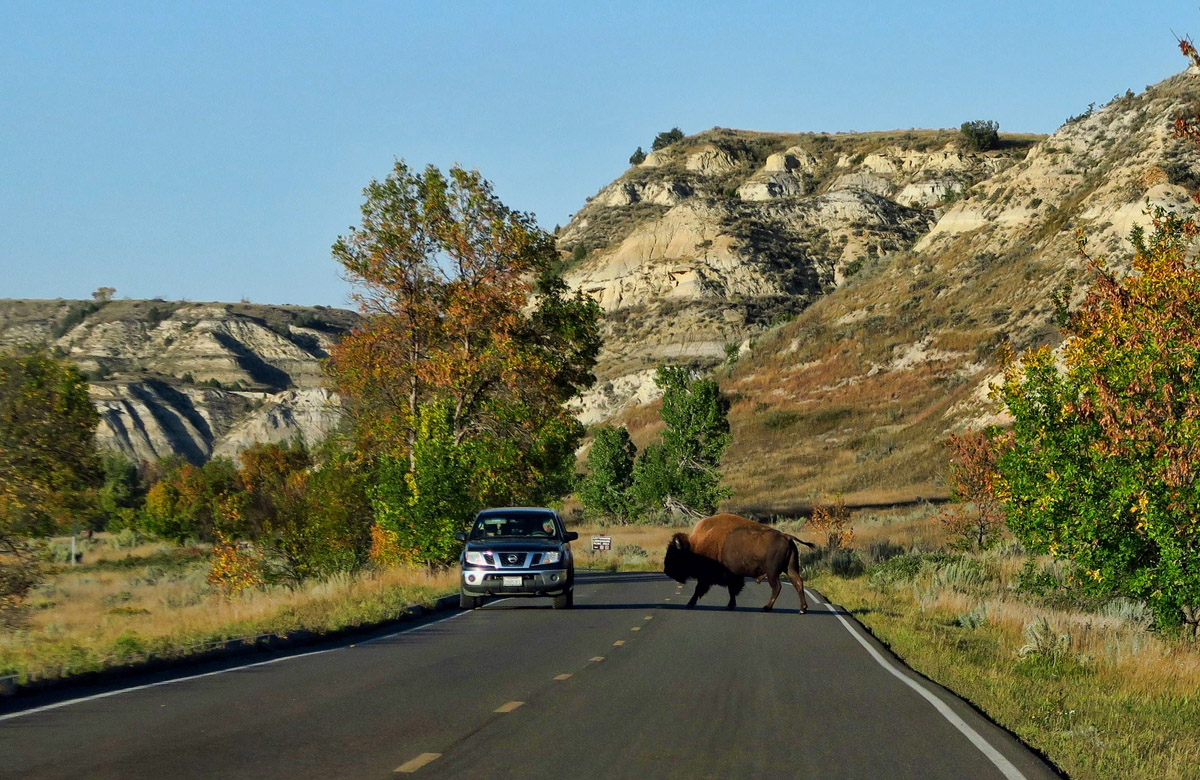 Though the bison herd is not as large as Custer, the park is smaller, so they are easier to spot.

North Dakota strikes me as a state of dichotomy. Flat planes versus canyon lands and badlands. Just as Big Bend National Park does not look like any of the rest of Texas, Theodore Roosevelt National Park does not look like the rest of North Dakota. They are both isolated islands of natural beauty, surrounded by vast areas of flat, boring plains, oil fields and farmland.

Theodore Roosevelt National Park is actually three different sections, the South and the North Units separated by sixty-eight miles, and Elkhorn Ranch down an unpaved road. (Heavy rains prior to my arrival prohibited a visit to the ranch location.) One must make the effort of a 90 minute drive down a lone two-lane, 18-wheeler transport truck corridor to visit both the South and North Units. Since the South Unit is the larger, more established, I make it my first stop. I figure I’ll decide after a few days whether to venture on up to the North Unit. 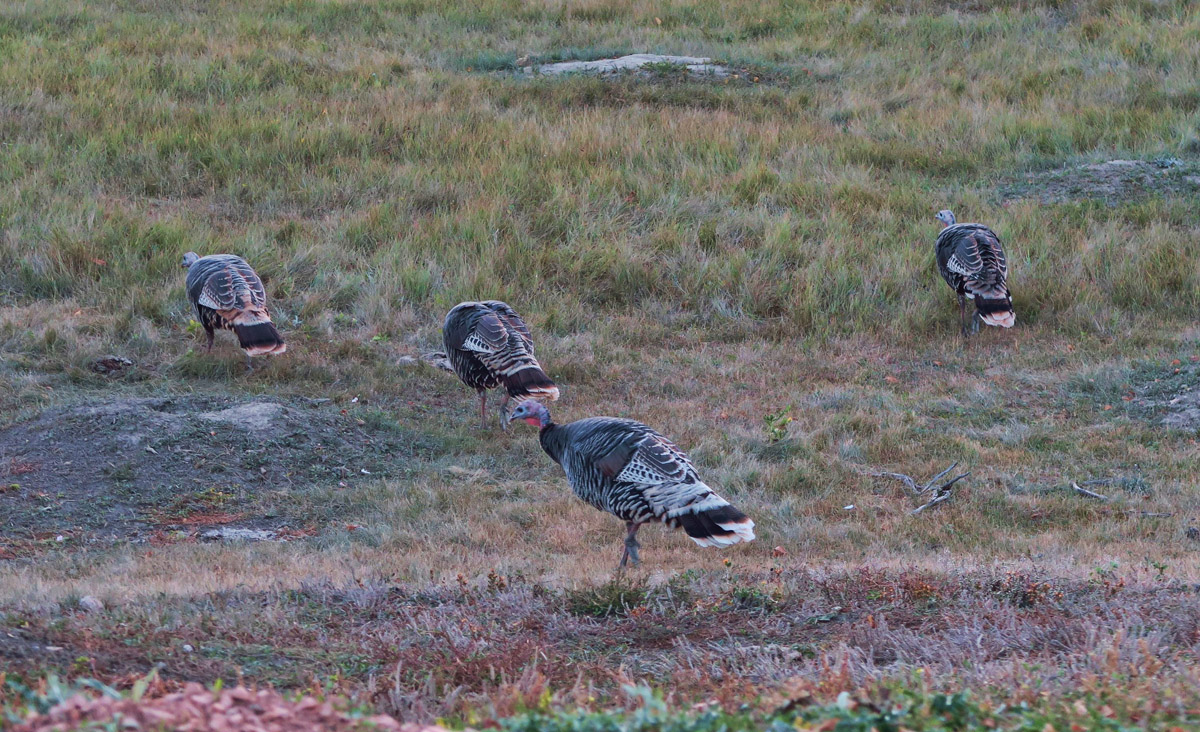 These guys are going to need some fattening up before Thanksgiving. 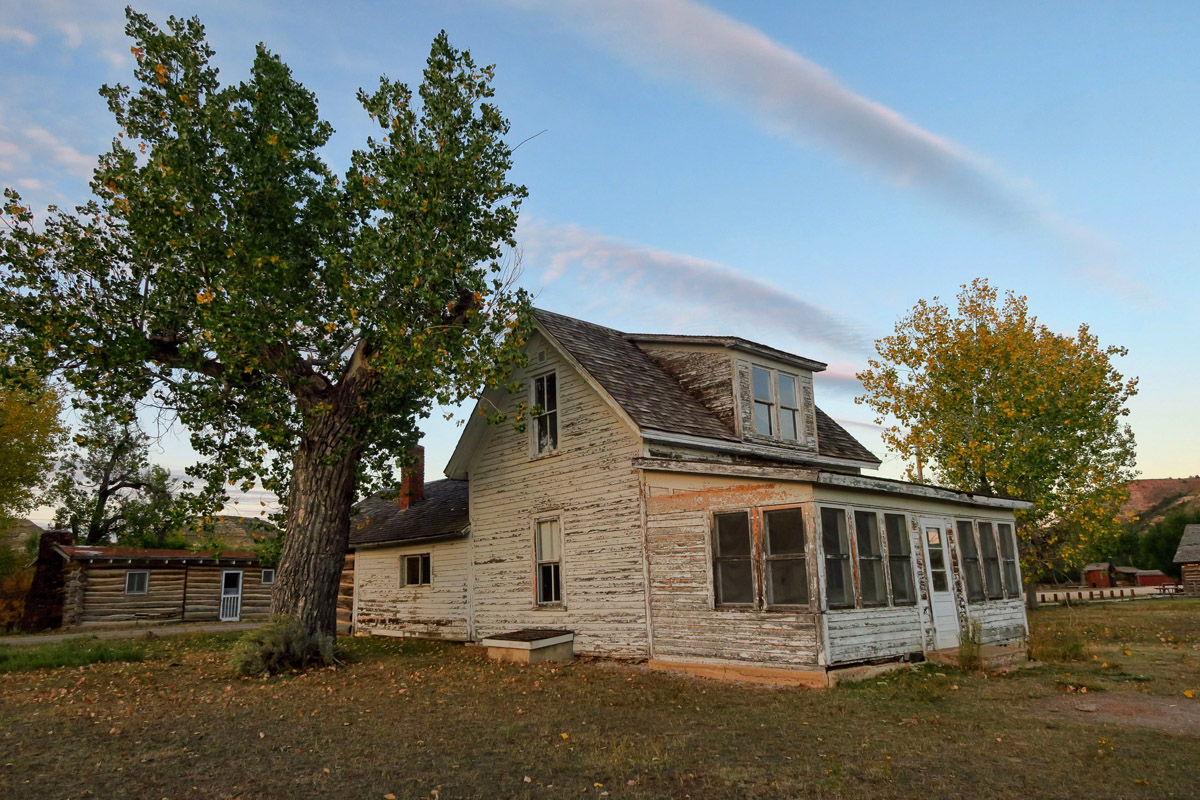 Peaceful Valley Ranch, the only original ranch house remaining, served as original headquarters when park was established in 1947 until VC was built in Medora in 1959. 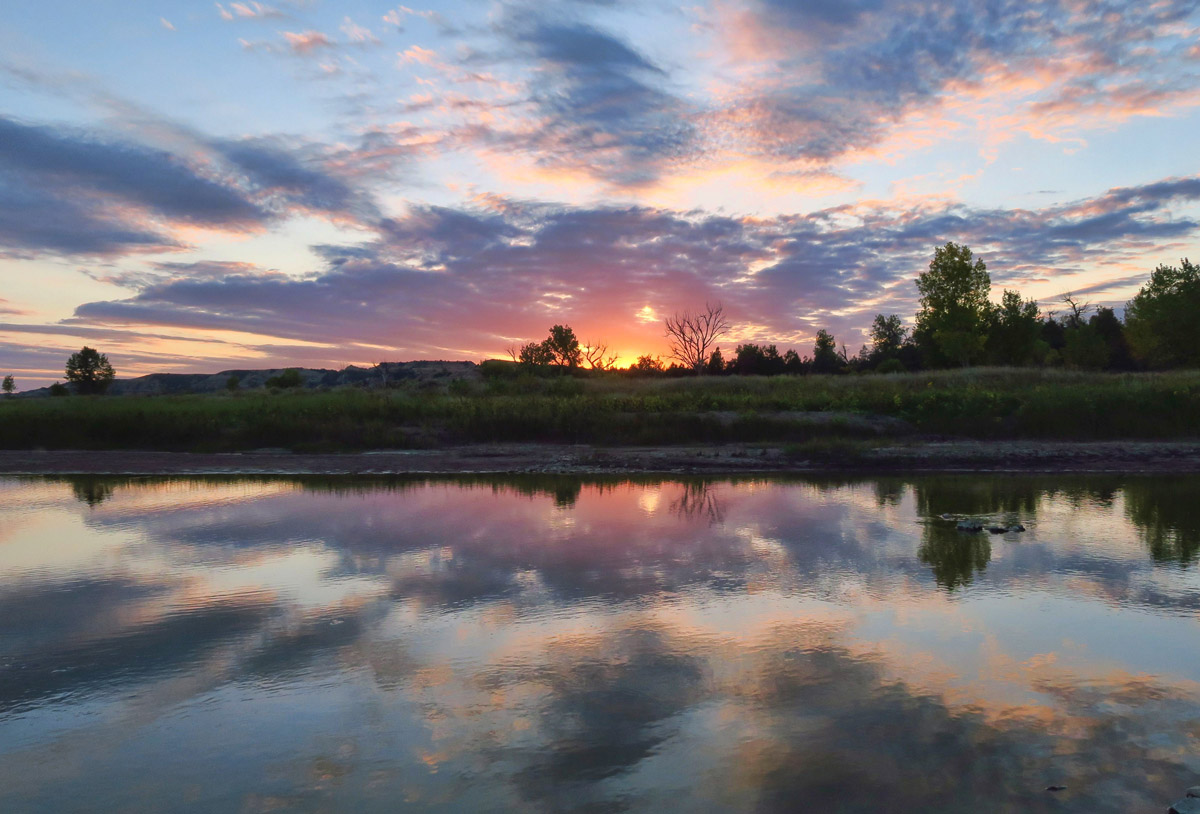 Easy to see how Peaceful Valley Ranch got its name. 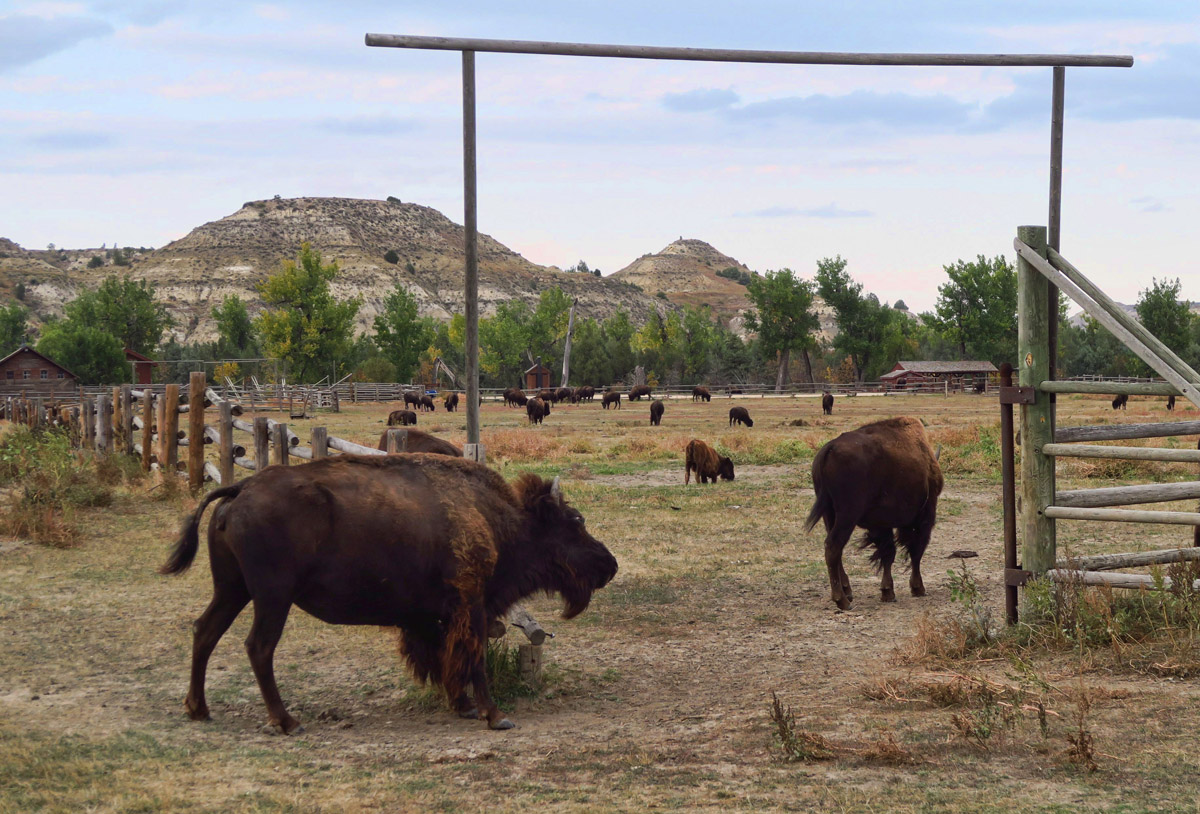 Peaceful Valley Ranch has bison visitors who come to eat the horses left-overs. This one is having a good scratch on the fence post.

The Visitor Center is closed when I arrive. Major construction is underway in the parking lot, and the VC is shut down due to the power being out while they work. So I proceed directly to the Cottonwood Campground, the only campground within the park. There are two loops in the campground.  It’s shaped like a figure 8 with one loop having long pull-throughs and more level concrete pads, while sites in the other loop are shorter, closer to the river, and can be a bit unlevel. Still, I choose the left loop to try to avoid generator noise. At this time of year when the temperature drops, it’s a trade-off. Campers in larger RVs tend to spend more time inside running their generators longer to power their furnaces, whereas campers build smoky fires to stay warm. Since the temps are dropping down into the 30’s at night, I won’t likely have my windows open, so I’ll risk the smoke over the constant “rat-a-tat tat” of reverberating generators. 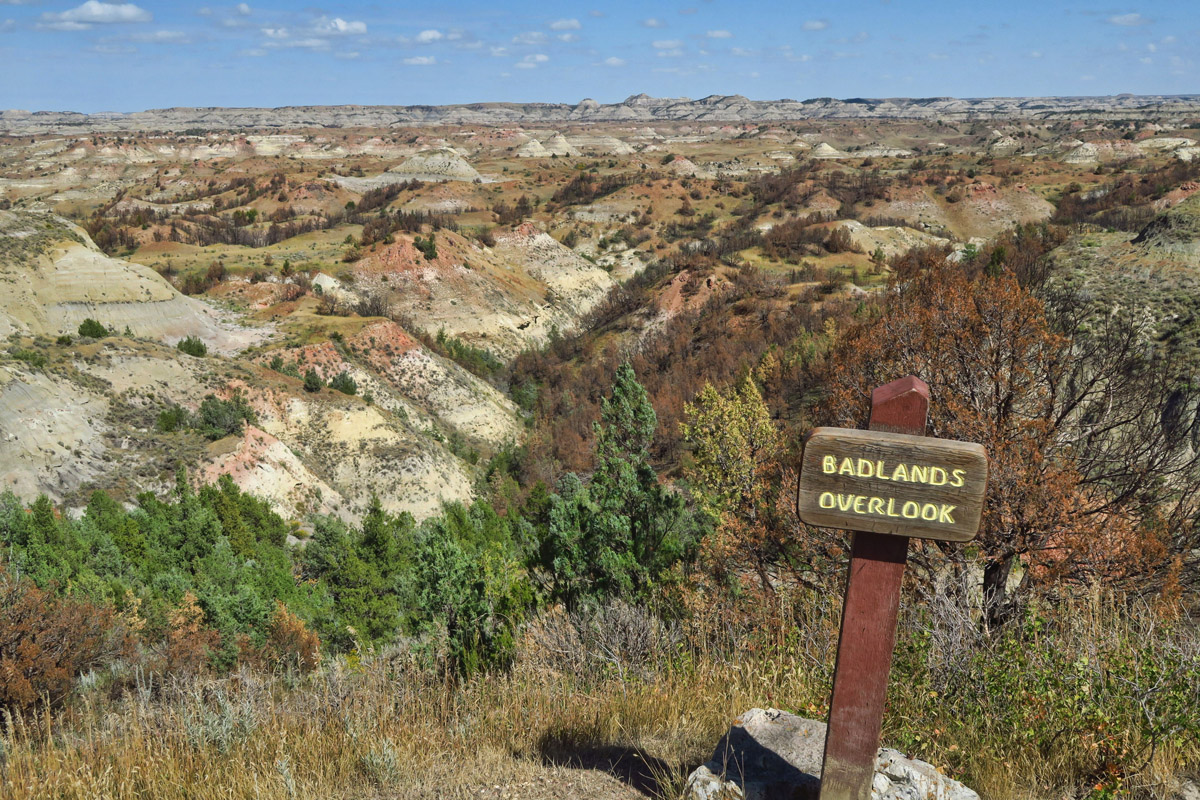 The 36-mile scenic drive has many overlooks. 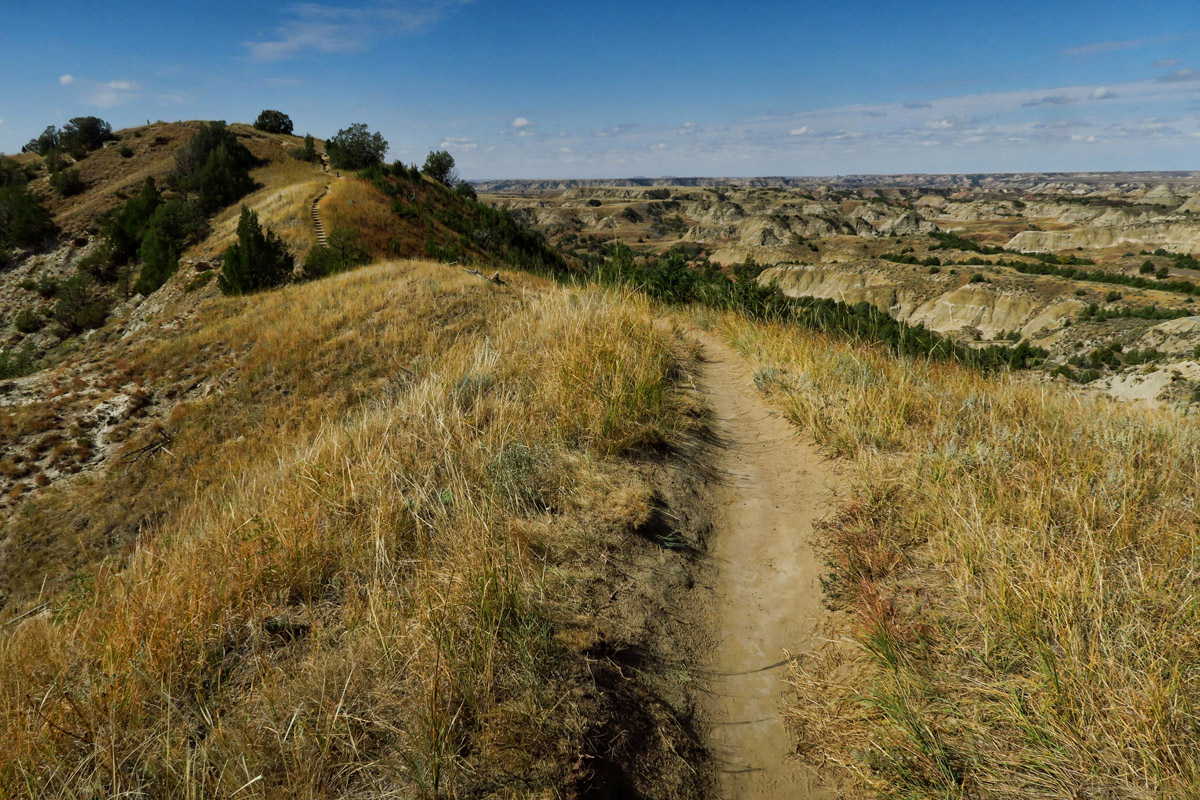 Some overlooks include short hikes. 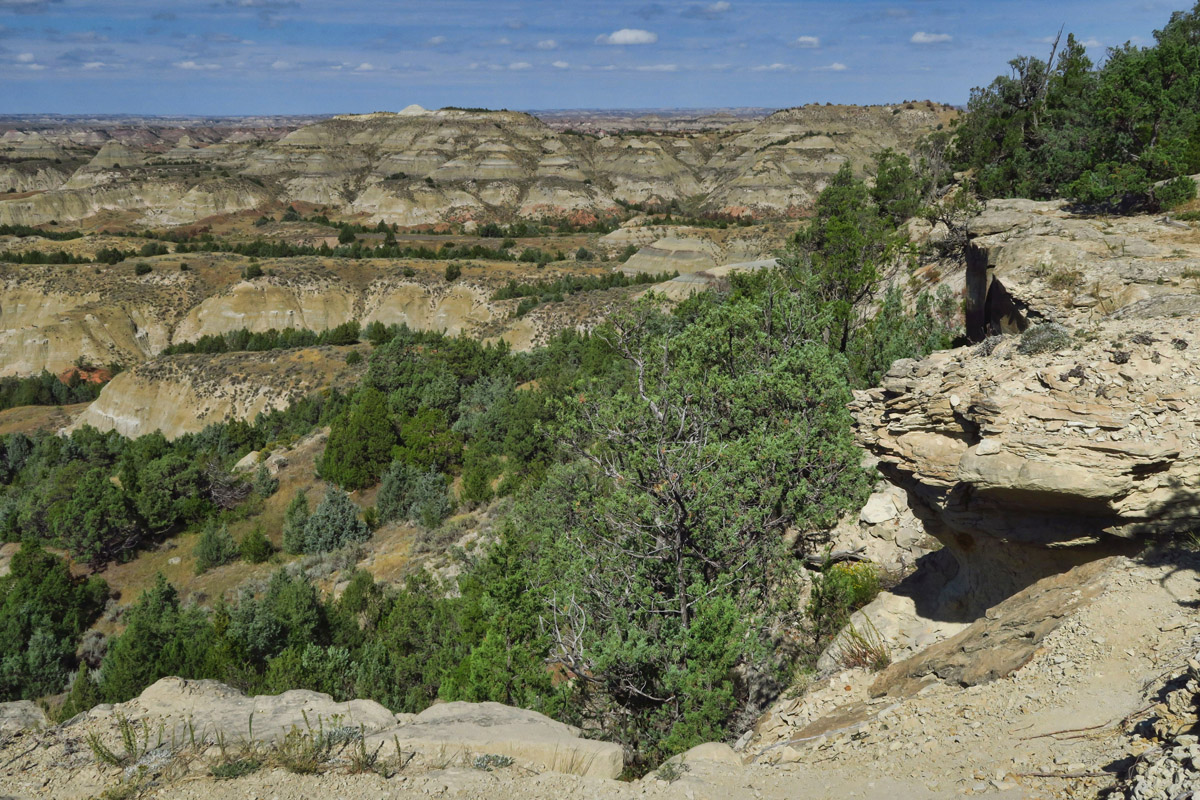 The “badlands” here have more vegetation than South Dakota’s Badlands.

Not knowing whether I would make it this far north, I have done little research. Having to bypass the Visitor Center, I am at a loss to see what this park has to do with Theodore Roosevelt, as there is nothing visible within the park or informational kiosks to link the two together. There’s a 36-mile scenic loop drive and a few short hikes, but otherwise it’s a bit anticlimactic after the South Dakota Badlands. 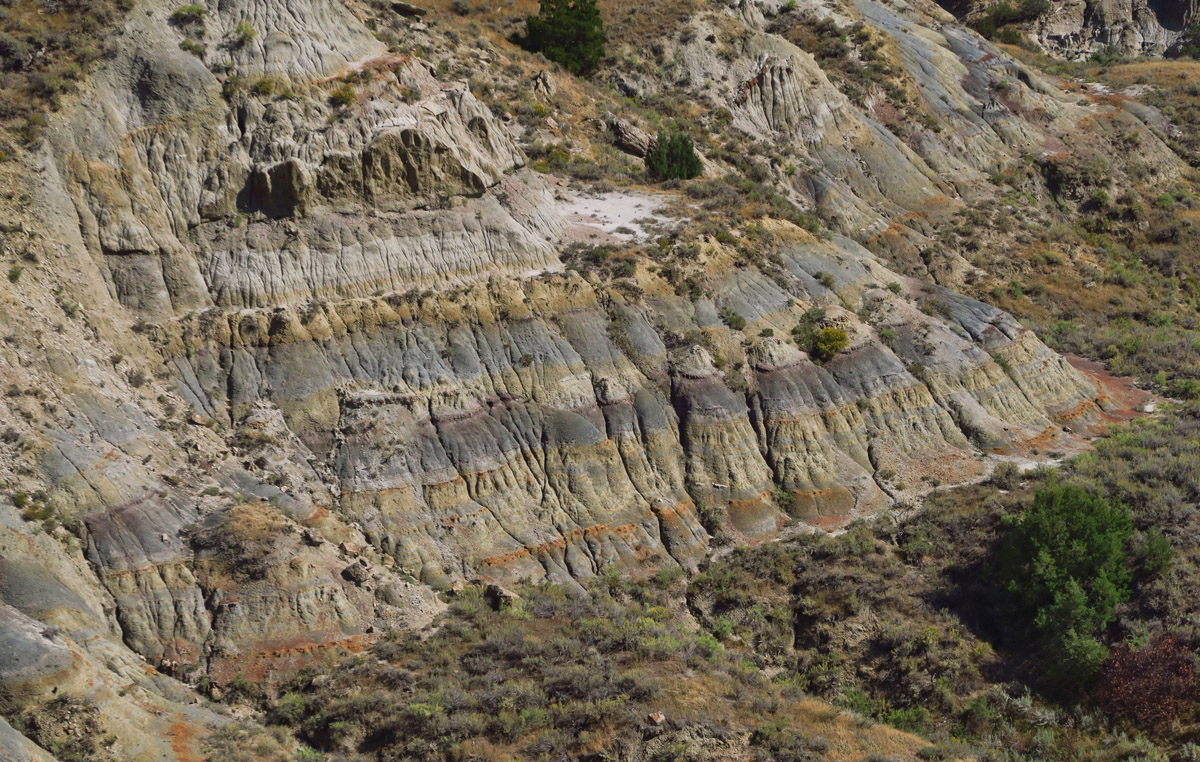 This is from the Coal Vein Trail, location of 12 foot-thick coal vein (see dark strip.) Here, an underground coal fire burned from 1951 to 1977. Land at site of fire collapsed. 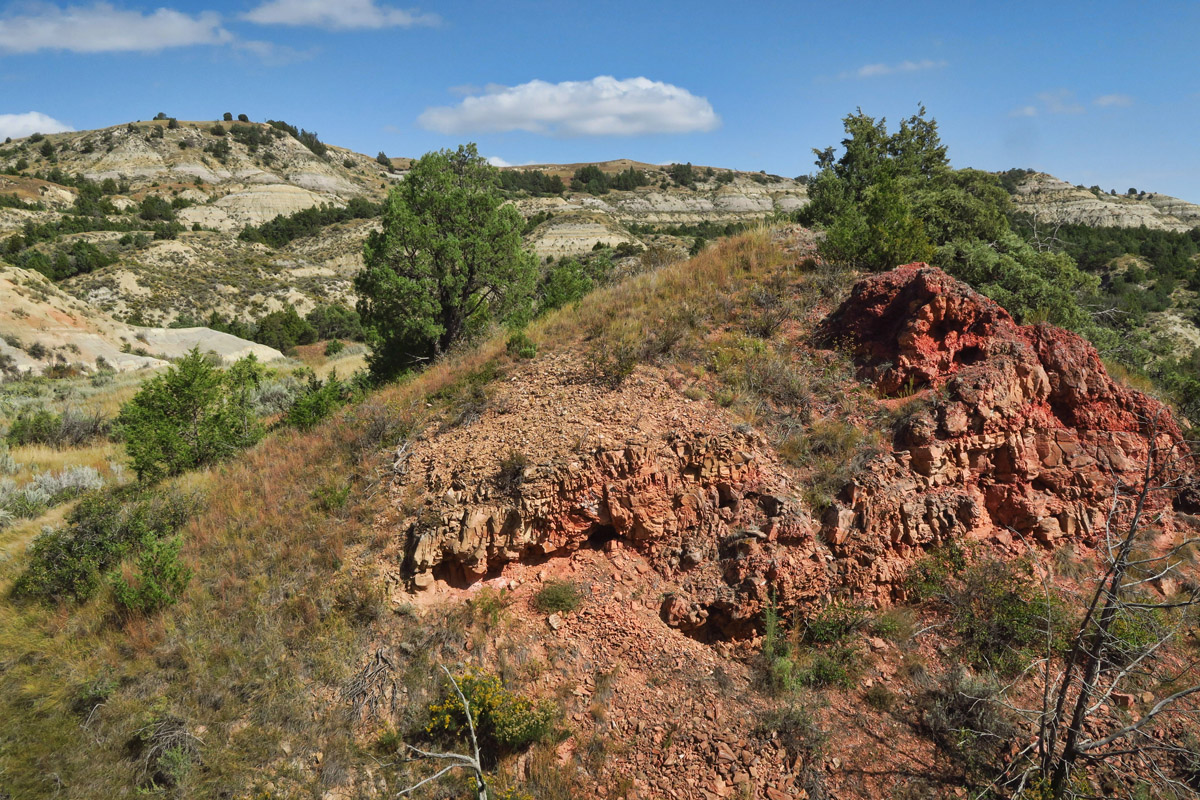 The red rock is “clinker,” which forms when coal veins catch fire and bake the rock. 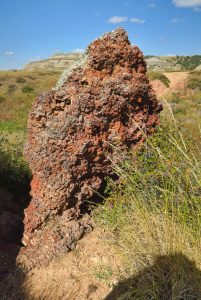 Chimneys formed when coal fire caused air to be sucked down into cracks, Fire burned up the cracks and baked rocks inside into hard clinker called porcellanite. Surrounding sediment eroded, leaving behind a chimney.

It’s later in the week when I make the return drive through the five mile construction zone to the Visitor Center that I learn the history of how the park came to honor the man. Roosevelt came to this area in 1883 to hunt buffalo. He purchased the Maltese Cross Cabin as his first temporary home, named for the eight pointed cross used as the ranch’s cattle brand. It was first a temporary home, but after losing both his mother and his wife on the same day the following year (on Valentines Day, no less!) he returned to North Dakota seeking solitude and a place to regroup. He credited North Dakota with altering the course of his life, saying “I would not have been president had it not been for my experience in North Dakota.” 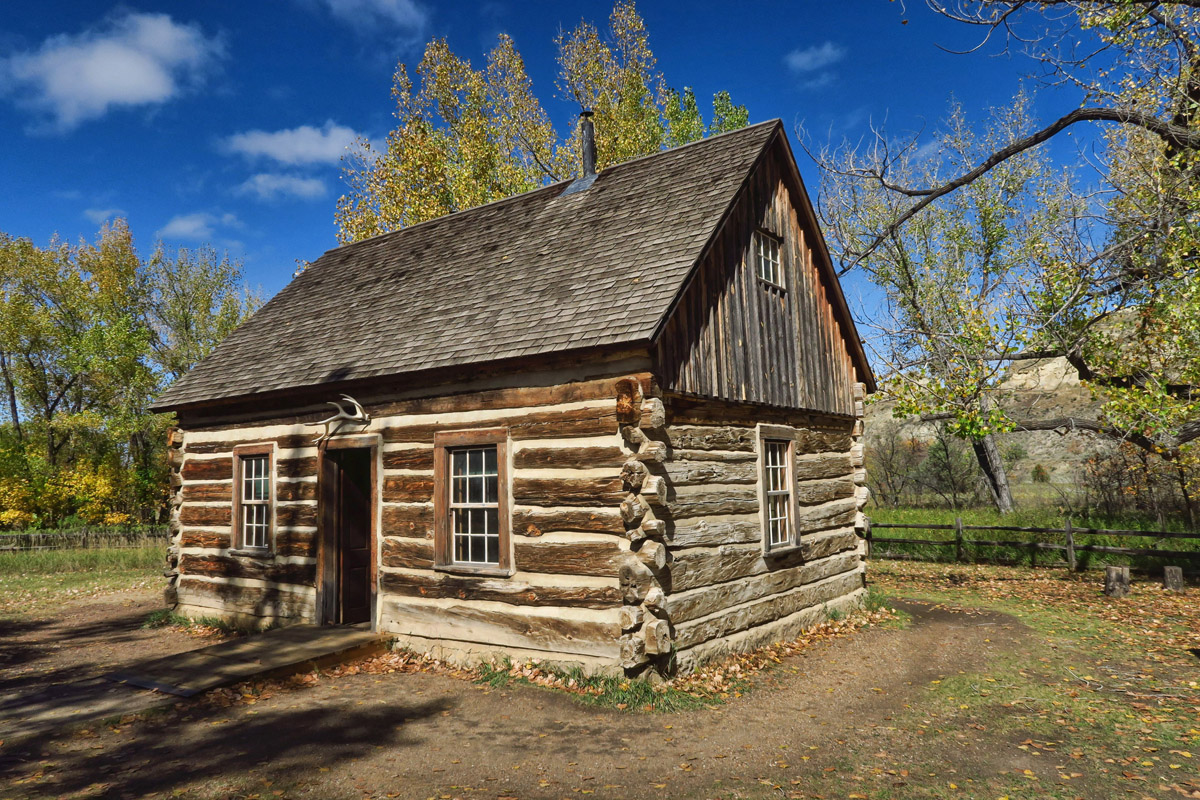 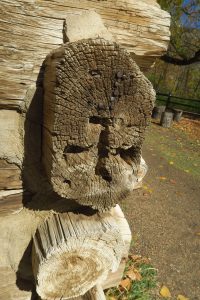 Roosevelt and ranch hands hammered spent rifle cartridges into the end of cabin log into the shape of Maltese Cross brand. All logs are original ponderosa pine used in 1883. 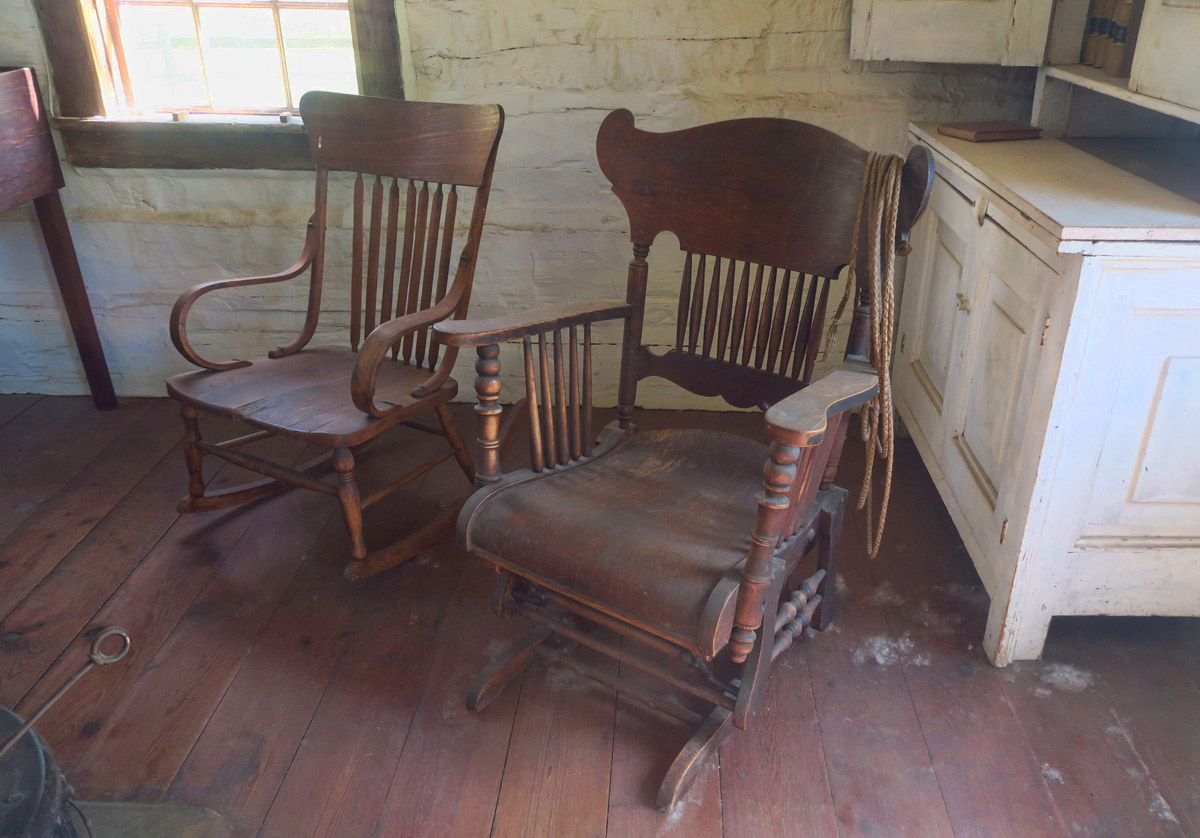 Roosevelt’s rocker. He was known to get so excited when discussing politics that he would rock himself all around the room. Maybe I need a rocking chair..

He later relocated to Elk Ranch, which is a third Unit of the park, though nothing remains of the buildings. The Maltese Cross Cabin on the other hand, has traveled from the World’s Fair in St. Louis, Missouri to Portland, OR for the Lewis and Clark Centennial Exposition, back to Fargo, ND, and then the state capital in Bismarck, ND. Having been restored, it now rests in back of the South Unit Visitor Center. 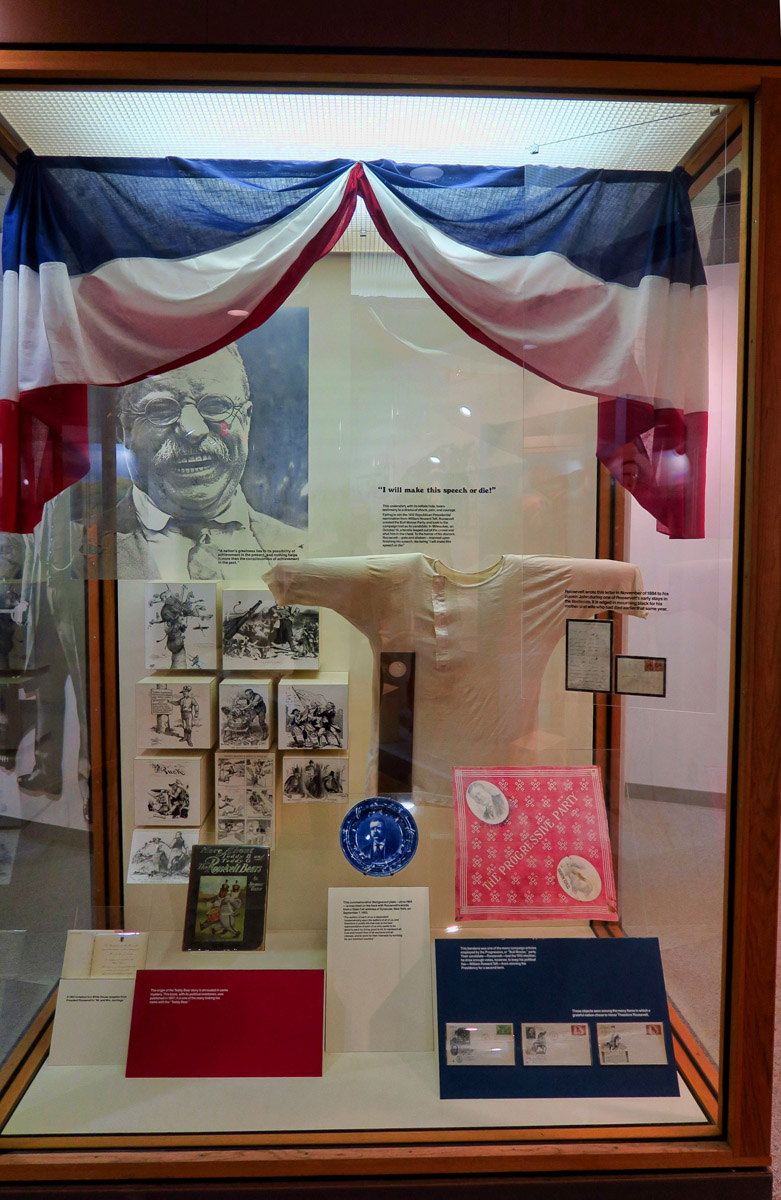 The Visitor Center contains artifacts from Roosevelt’s Presidential term, including the shirt with bullet hole he was wearing when shot in 1912 while giving a stump speech. 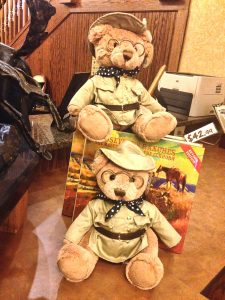 The only “Teddy Bears” I saw for sale were outside the park at a local restaurant. 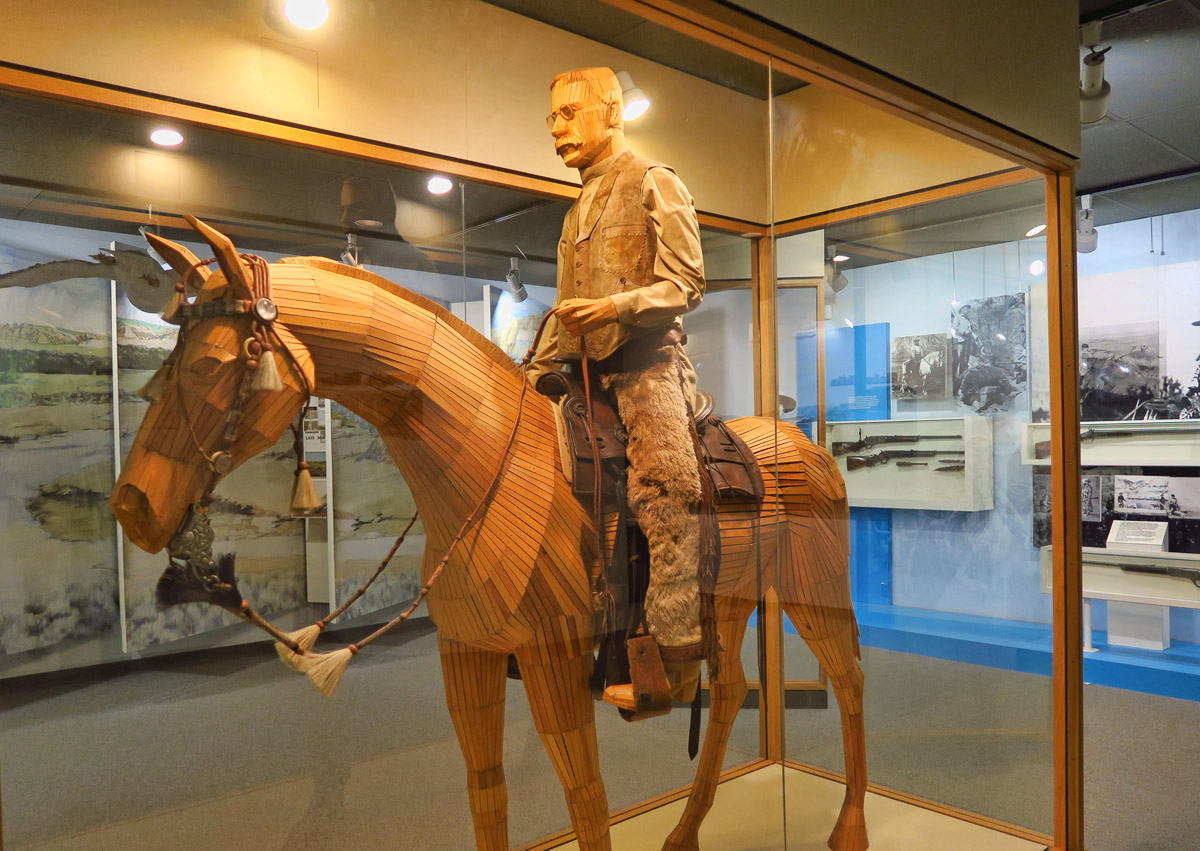 The clothing and horse accessories were originals that were worn by TR.

“We have become great because of the lavish use of our resources. But the time has come to inquire seriously what will happen when our forests are gone, when the coal, the iron, the oil, and the gas are exhausted, when the soils have still further impoverished and washed into the streams, polluting the rivers, denuding the fields and obstructing navigation.” ~ Theodore Roosevelt

It’s difficult to imagine where we would be today without him…or where we will be in the future without the likes of him. 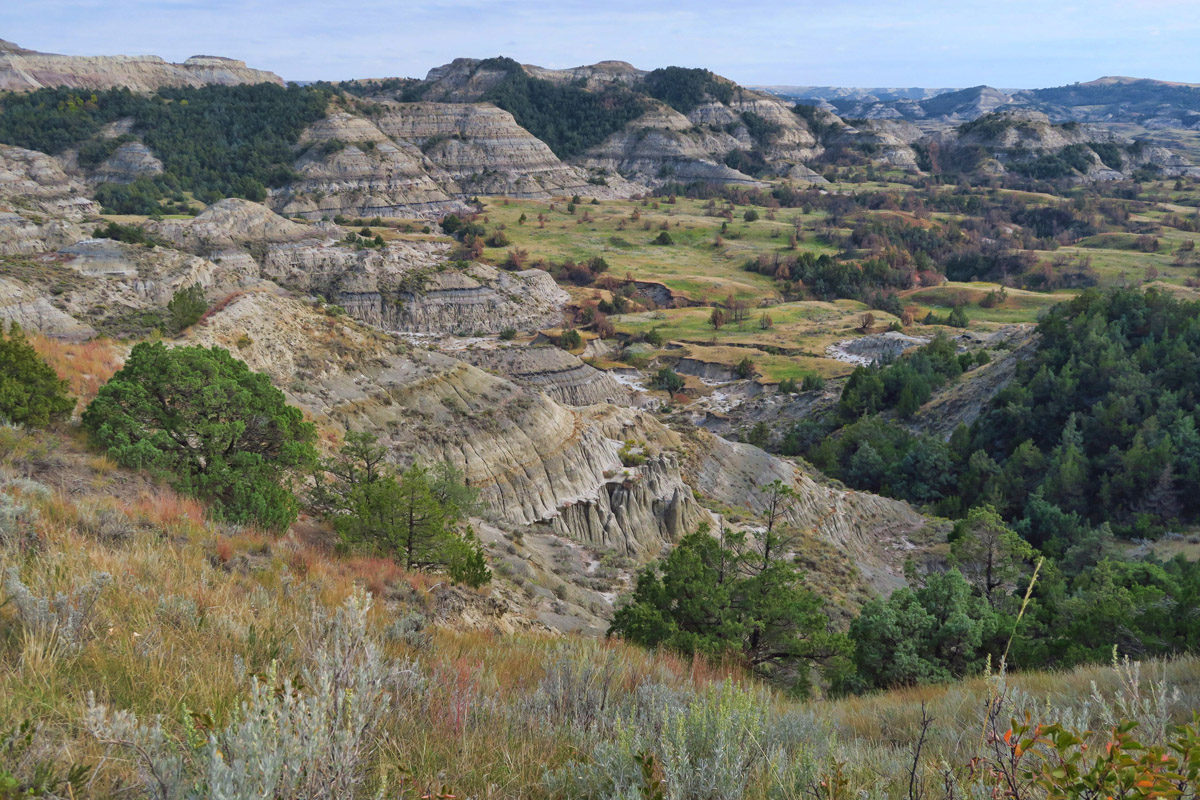 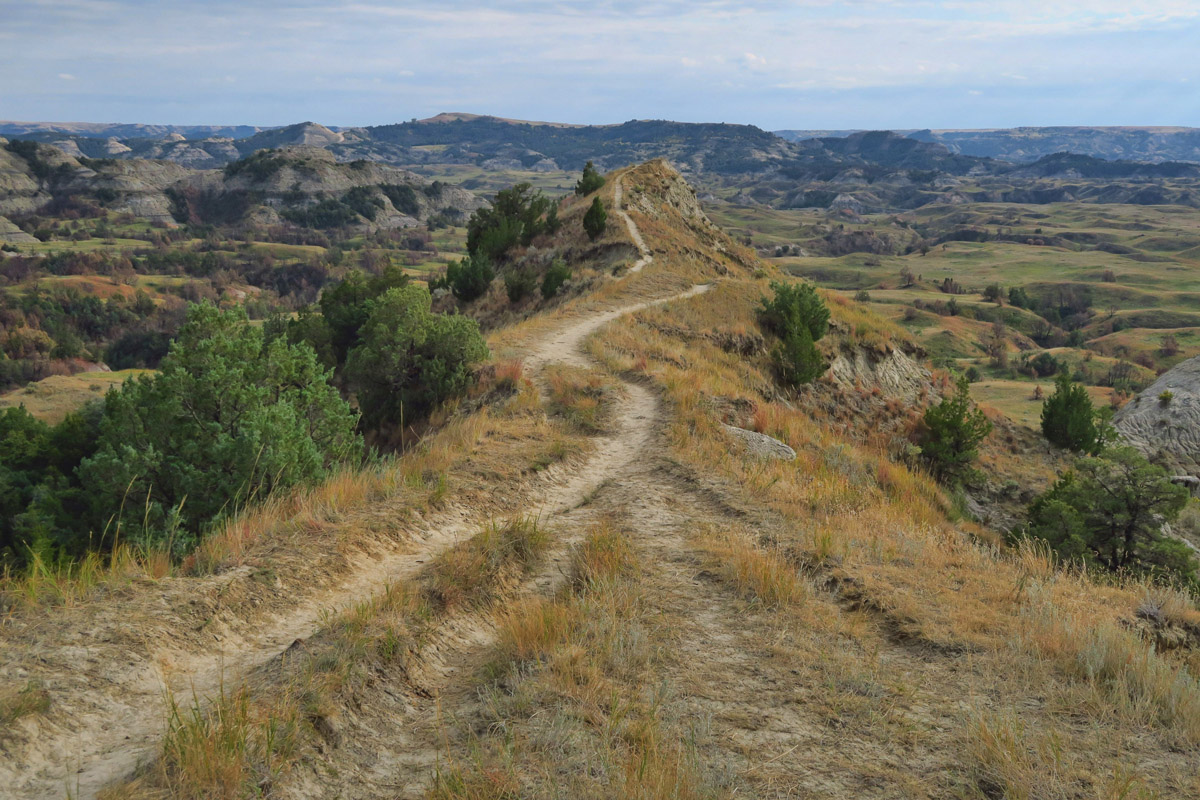 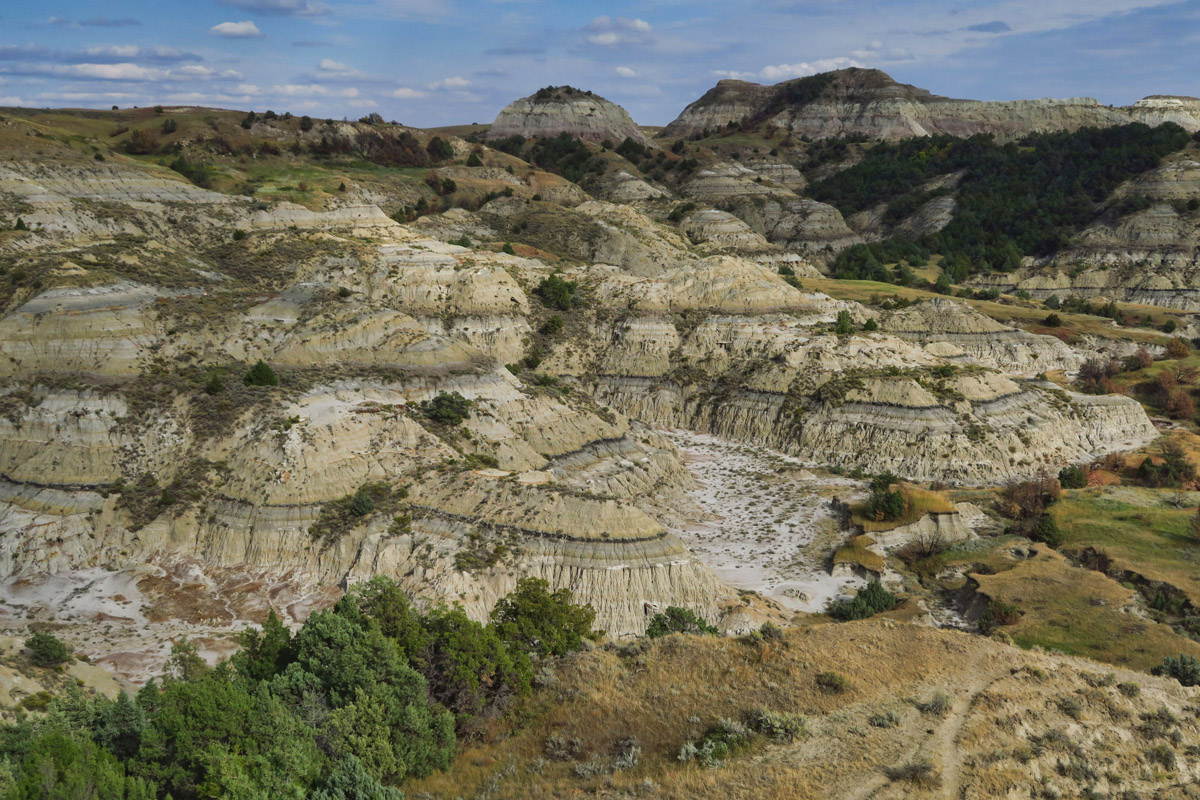 After three days in the South Unit of the park, I am still undecided on whether to make the drive to visit the North Unit. As I sit at the front of the line of traffic stopped for construction exiting the park where the road narrows to one lane, I engage in a conversation with the man wearing the lime green safety vest, his dreadlocks protruding from his safety helmet. He holds the reversible stop sign on a pivoting pole while waiting for the pilot car to lead the opposing lane of cars through the slow five mile crawl, so we have plenty of time for a chat.

He asks where I’m headed, and I tell him I’m still undecided. Either north to visit the other side of the park, or south back in to South Dakota. As Bob Marley tunes blare from his boom box behind him, he tells me, “Skip it! You’ve seen all there is to see! It’s not worth the drive…just more of the same. In fact, skip the rest of North Dakota altogether for that matter, and head back down to South Dakota! You’ve already seen the best of it. Trust me on this…it’s all downhill from here…” 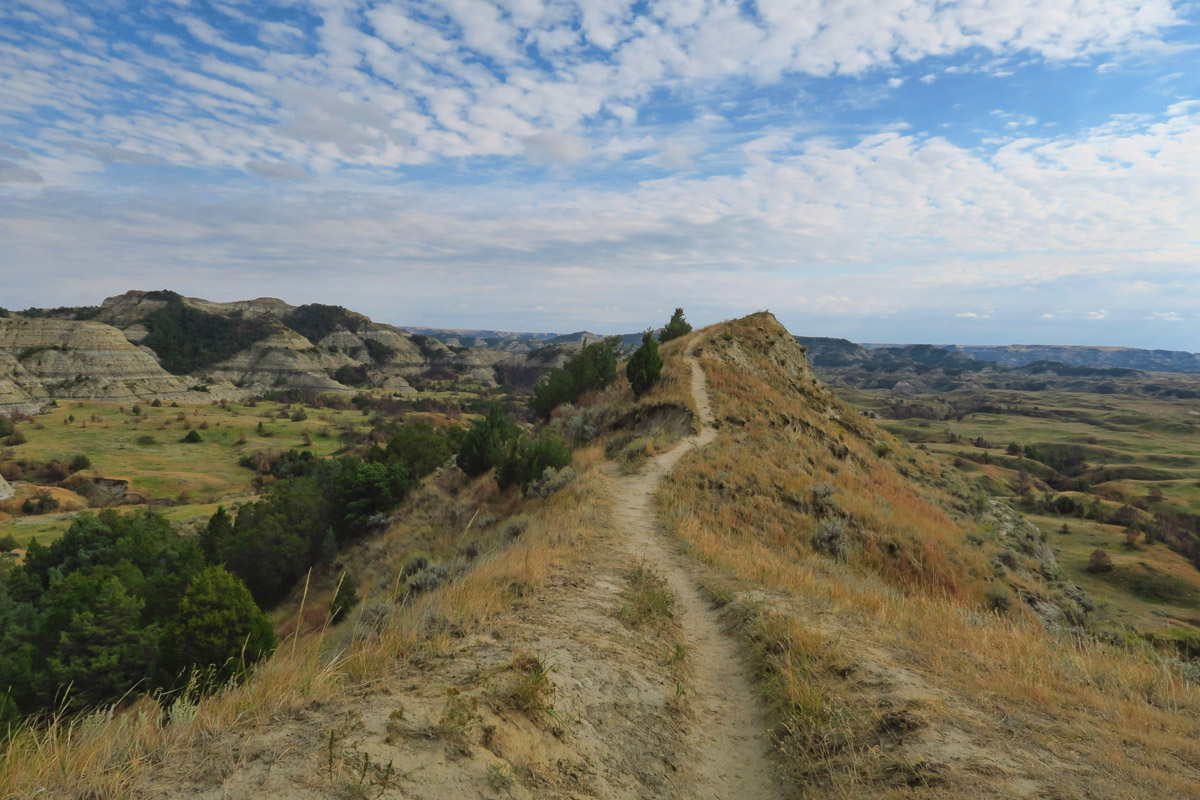 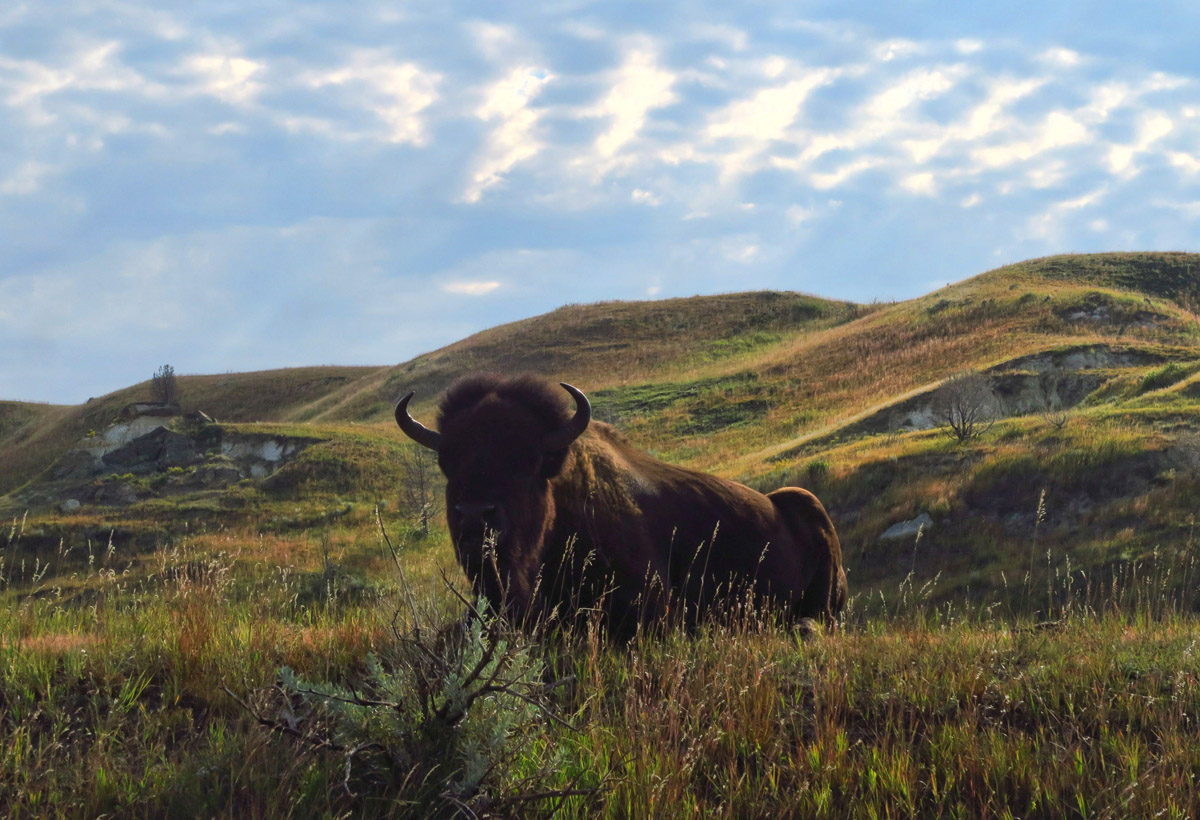 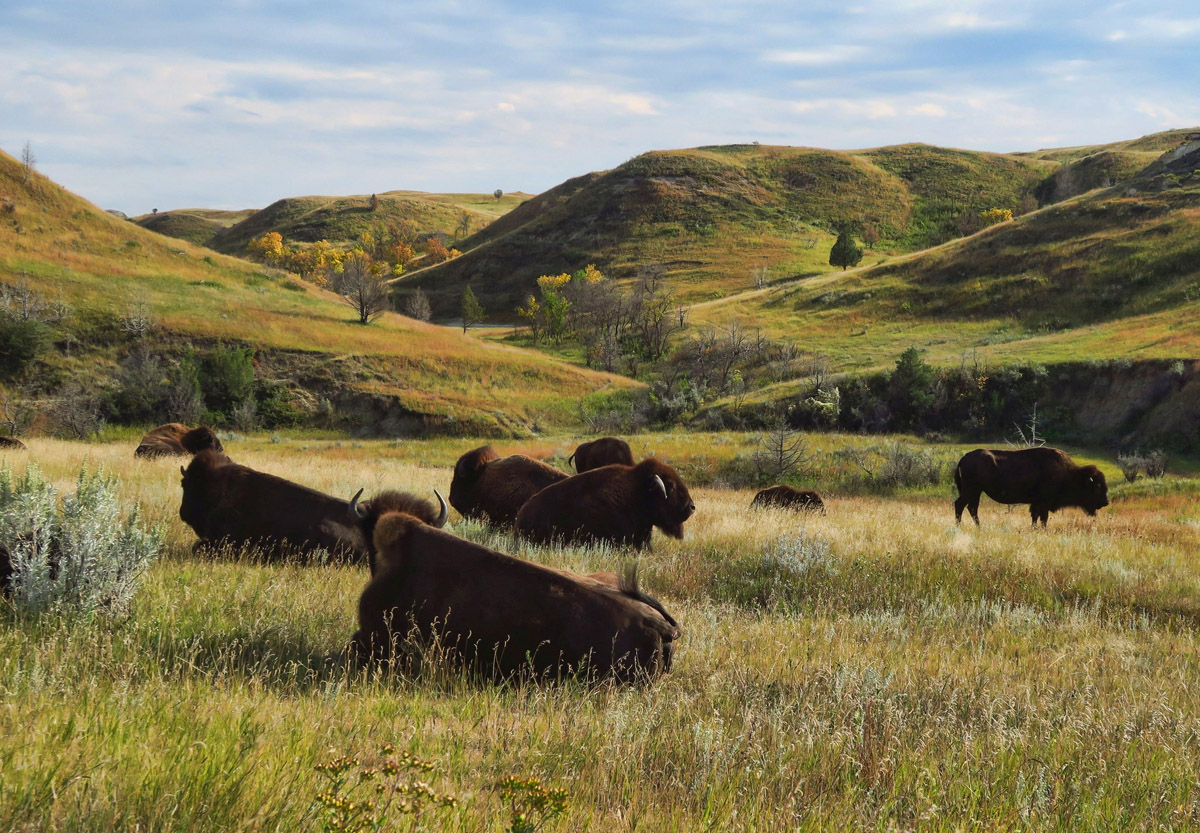 My dad always said when cows were lying down, it meant rain was coming. Wonder if the same goes for bison… 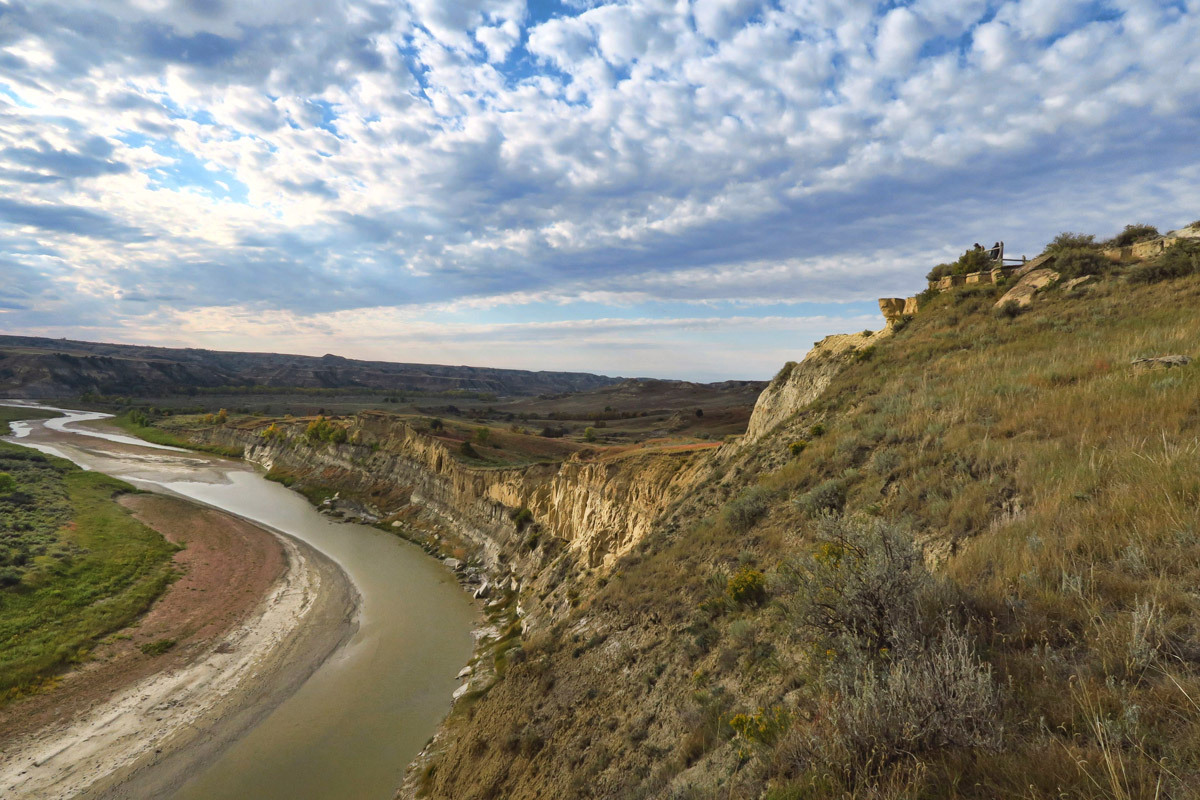 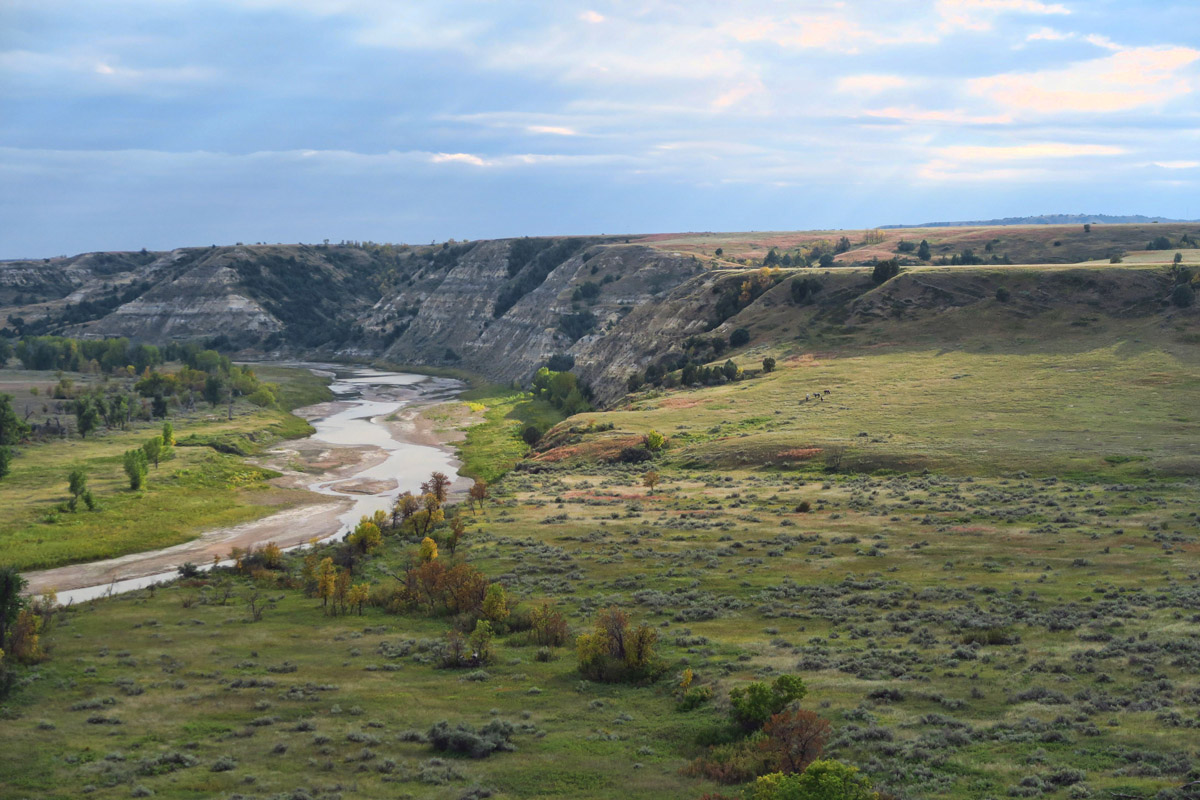 Impossible to see, but those specs over on the grassy plateau to the right of center are a few of the 160 feral horses in the park. 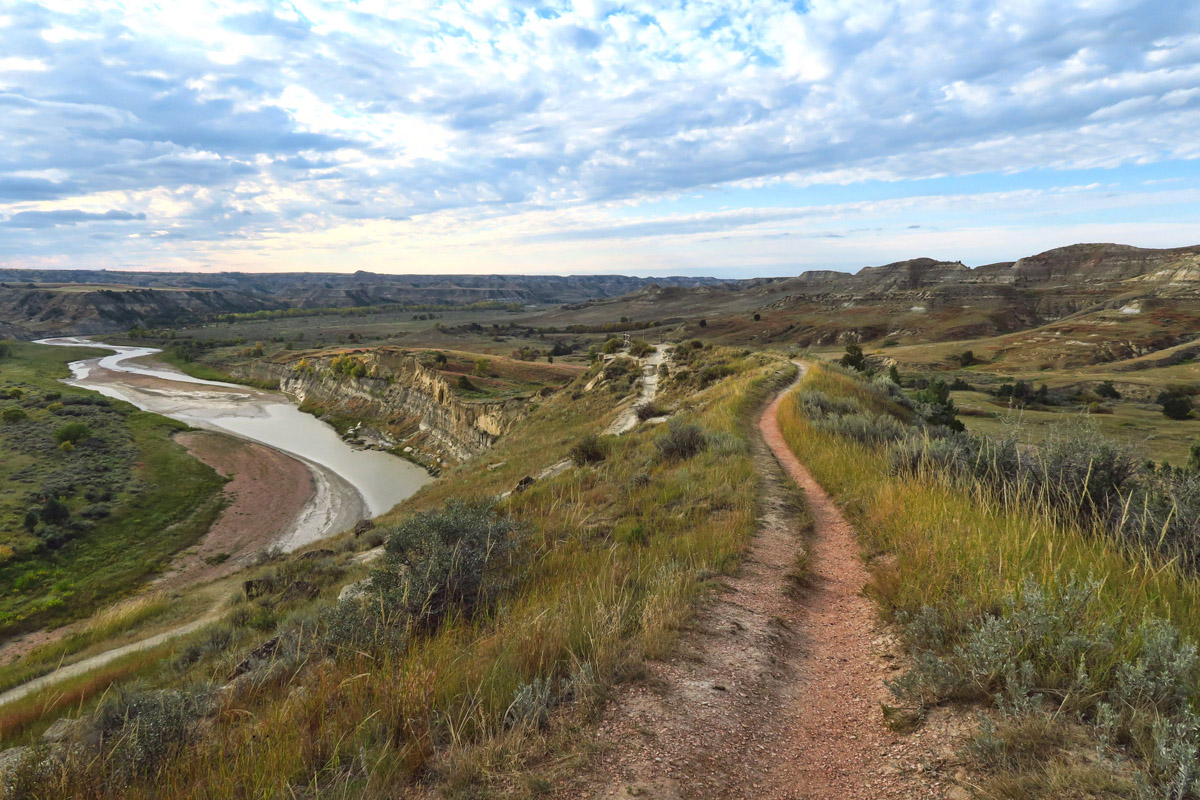 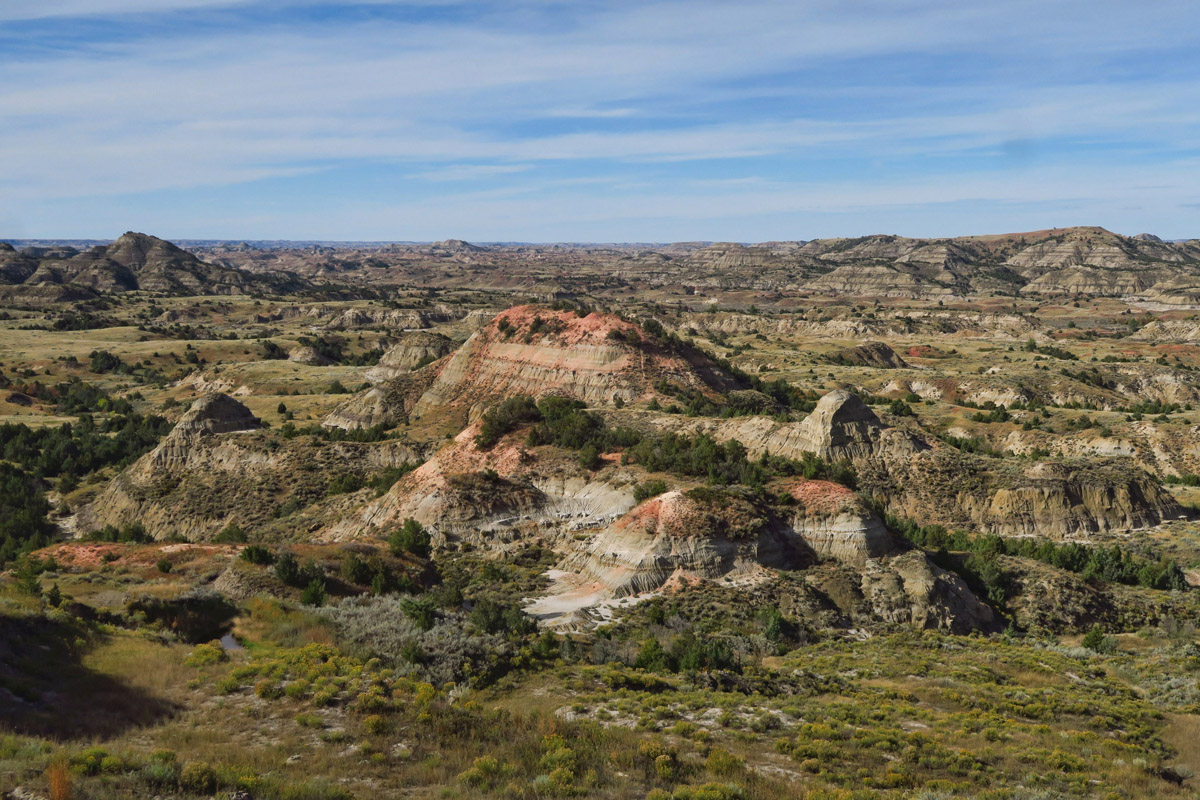