Headed west from Wisconsin with my sights set on Utah, I am determined not to have to cross the Rockies again. Having traversed I-70 through the Eisenhower Tunnel and across Vail Pass twice now, I will do what I have to do to avoid it again. That means either a more northerly route through Wyoming, or dropping down all the way to Hwy 160 to cross Colorado through Pagosa Springs and Durango…not exactly the flat plains. I decide to stay north and risk the weather.

But winter is coming on fast this year. Even as I left North Dakota, locals were talking about having to turn on the furnace earlier this year than they can recall in many years. I seem to have gone from summer straight into winter, skipping autumn altogether. 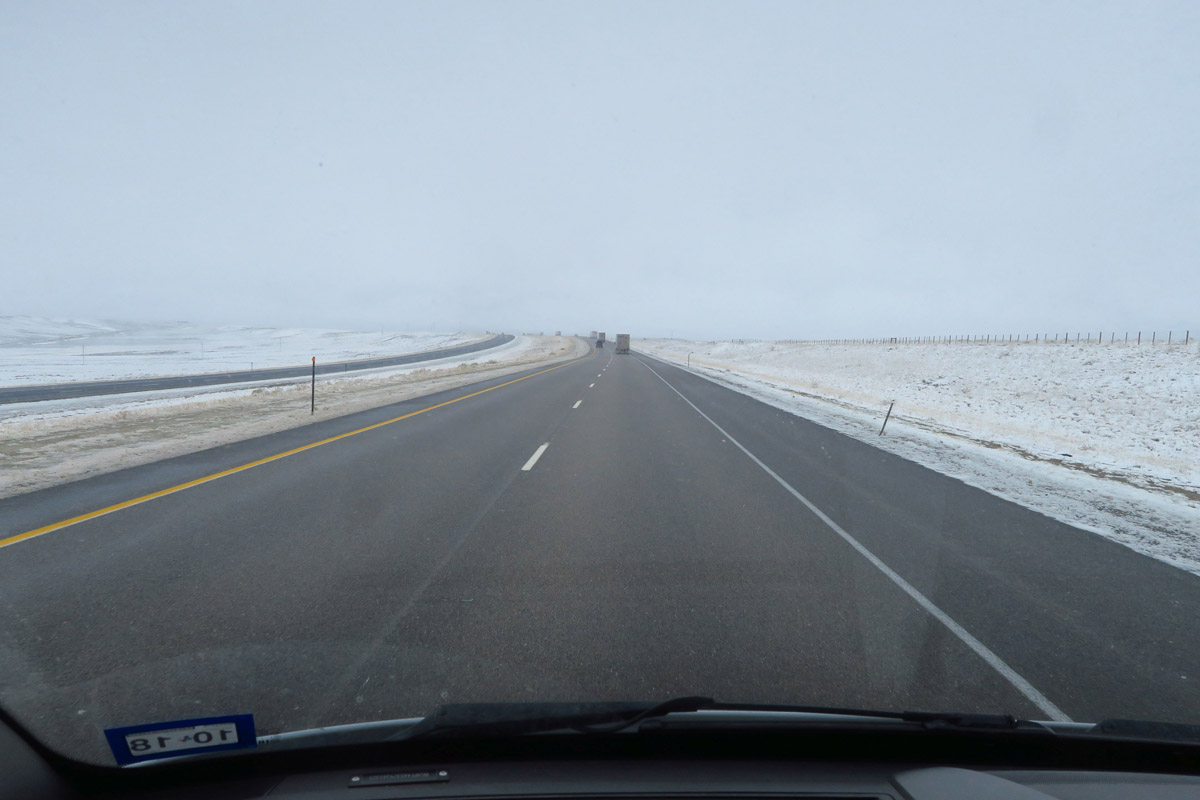 I-80 just outside of Rawlins, Wy with winter weather advisories. 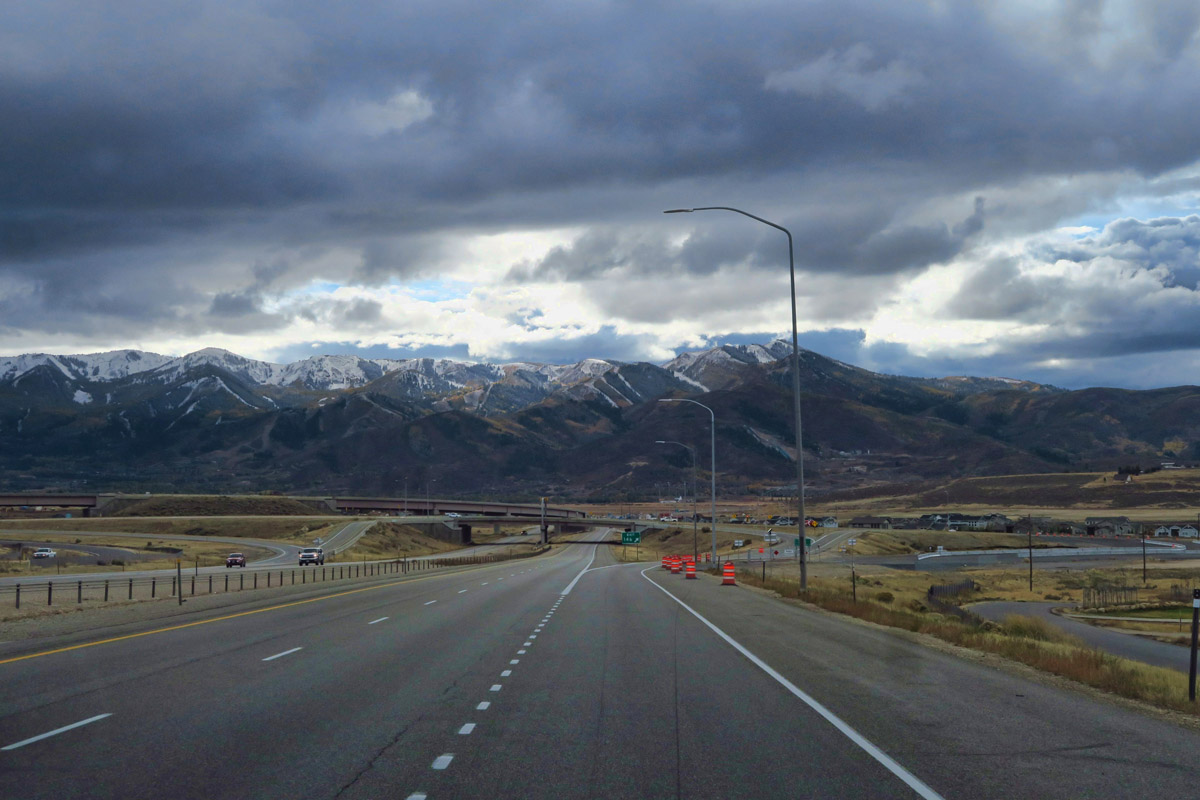 Heading down into Park City, UT.

There is a “winter weather advisory” across I-80 through Wyoming. I bail out of the Hwy 20 scenic route across Nebraska, thinking if I hit the interstate, I might can outrun it. I make it as far as Rawlins, WY, when it catches up to me. I wake up in the Walmart parking lot to two inches of snow covering the Winnie and the Tracker. Why I don’t take photos, I cannot say. I think it was a case of too much anxiety. I’m not a good snow driver in a car, let alone driving 11,000 lb rig while towing a car. The forecast is worsening, and I am eager to get on the road at dawn’s early light in hopes of getting further south asap.

It’s a wall of misty fog driving across Wyoming. Between the snow flurries and the shrouds of low lying fog across the mountains, it’s tense conditions with all kinds of warning messages flashing on the digital signs bridging the highway. My plan is to drive down through the Flaming Gorge National Recreation Area. I pull off the highway at least five times as I constantly revise my plans due to weather. As I am parked at the truck parking near Rock Springs, WY, trying to decide which side of the Flaming Gorge I should take, it begins to snow again. Finally, I say “F___ it! If there’s a gorge out there, I cannot see it!” And decide to take the most direct route south sooner than later. 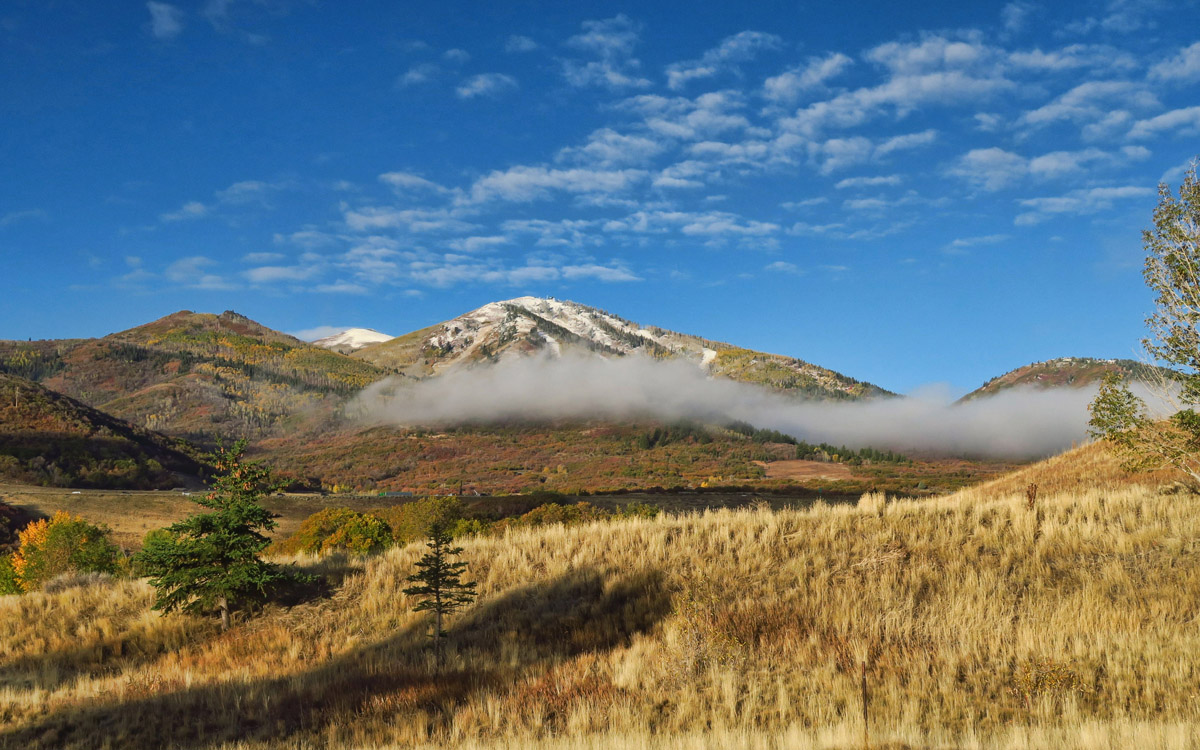 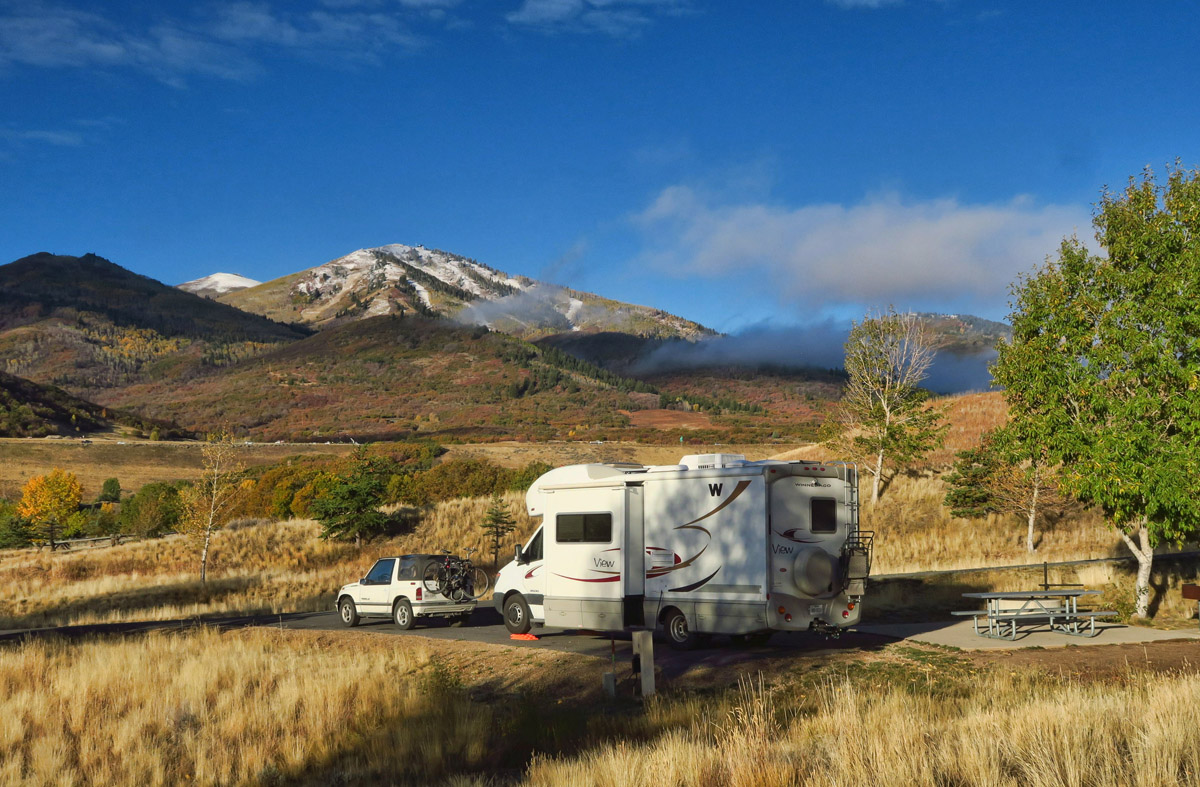 You get your pick of campsites if you wait until snow is in the forecast. 😉 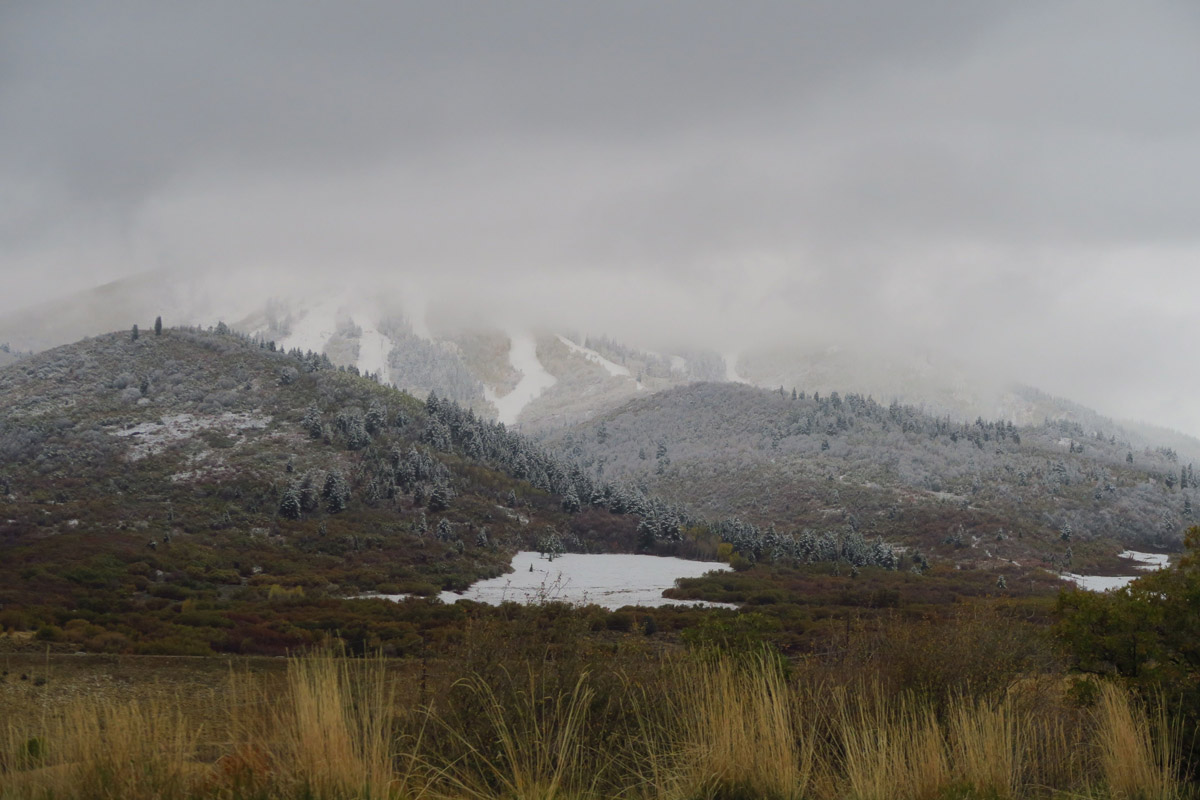 The following day the fog and snow roll in. 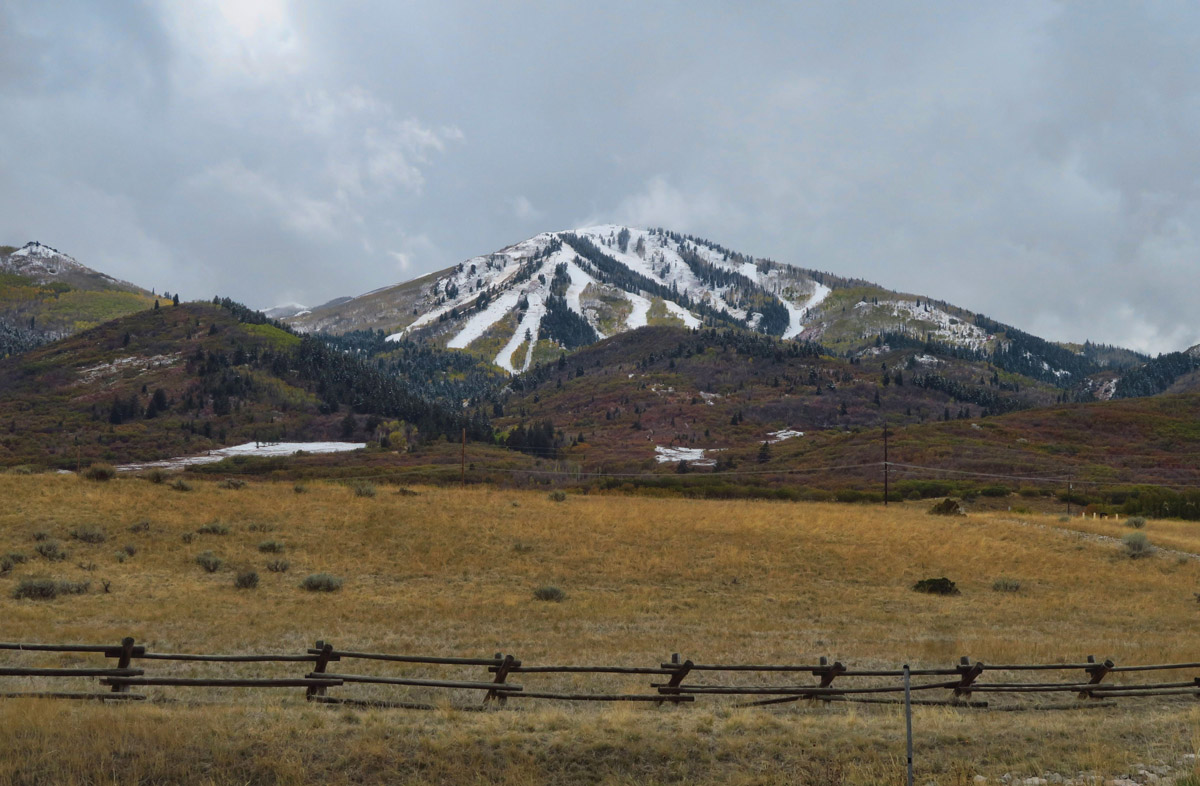 Lots of fresh powder on the runs, and ski season doesn’t open for another month!

Life is made to feel more pathetically complicated by the fact that I am approaching my birthday. It’s bad enough to spend it alone on the road, but I refuse to wake up on my birthday in yet another Walmart parking lot, after driving five days straight in a row. But timing is off, as my GPS tells me I am headed straight for Salt Lake City, not exactly an RV-friendly town, during 5’oclock traffic on the eve of my birthday. This calls for yet another stop in another Rest Area while I check the map for alternative routes.

I see I can skirt around Salt Lake City, passing right through Park City, Utah just a few miles from Jordanelle State Park. I pull in with no reservations and am relieved to find the park at only about 25% occupancy. With an electric hook-up, I laugh in the face of the snow storm that is finally catching up to me. Having spent many of my younger days skiing the slopes of Park City and Deer Valley, I feel somewhat at home and comforted by the view of the slopes right outside my window. 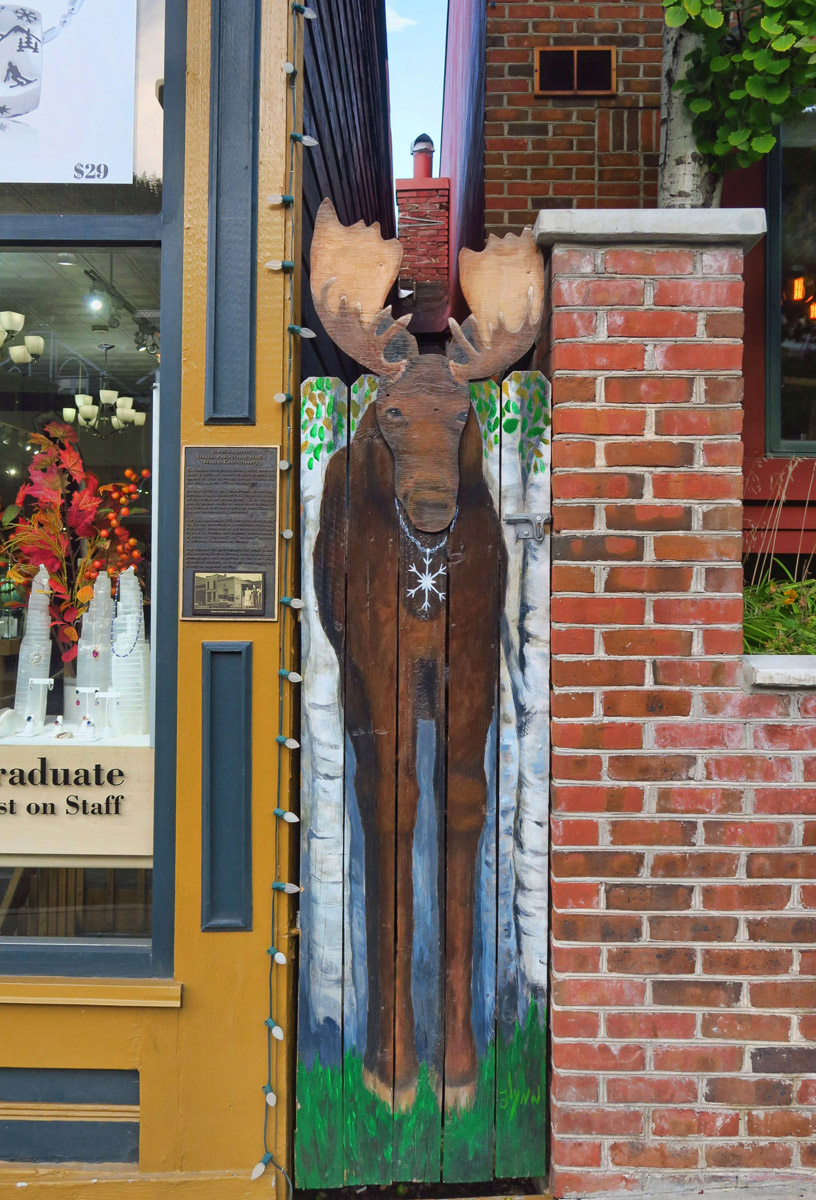 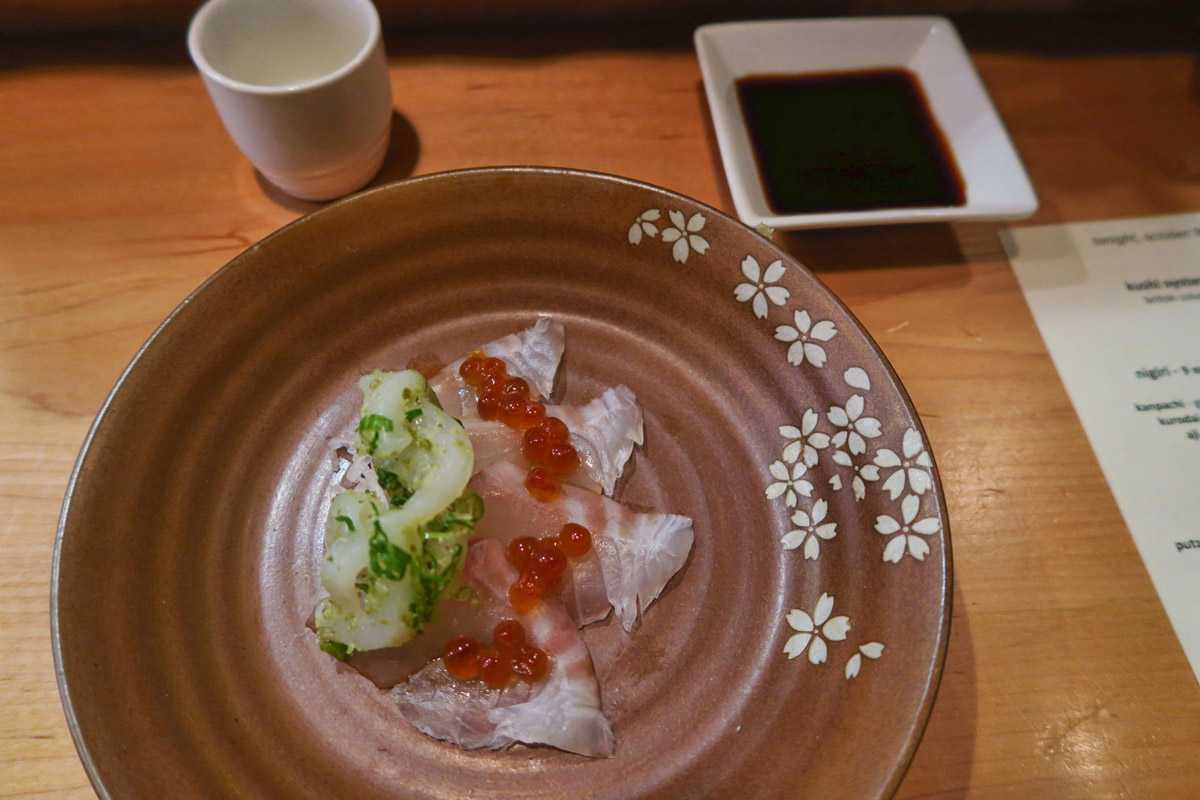 Seeing as it was my birthday, I sat at the sushi bar to avoid the dreaded “Table for ONE?? Just YOU?” conversation with the hostess. 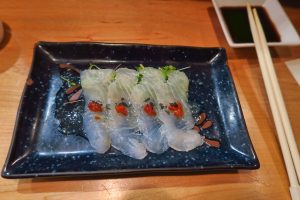 Being a Libra, I was not in the mood to make decisions, so I asked the sushi chef if he had a tasting menu. He said, “No, but I can make one up.” 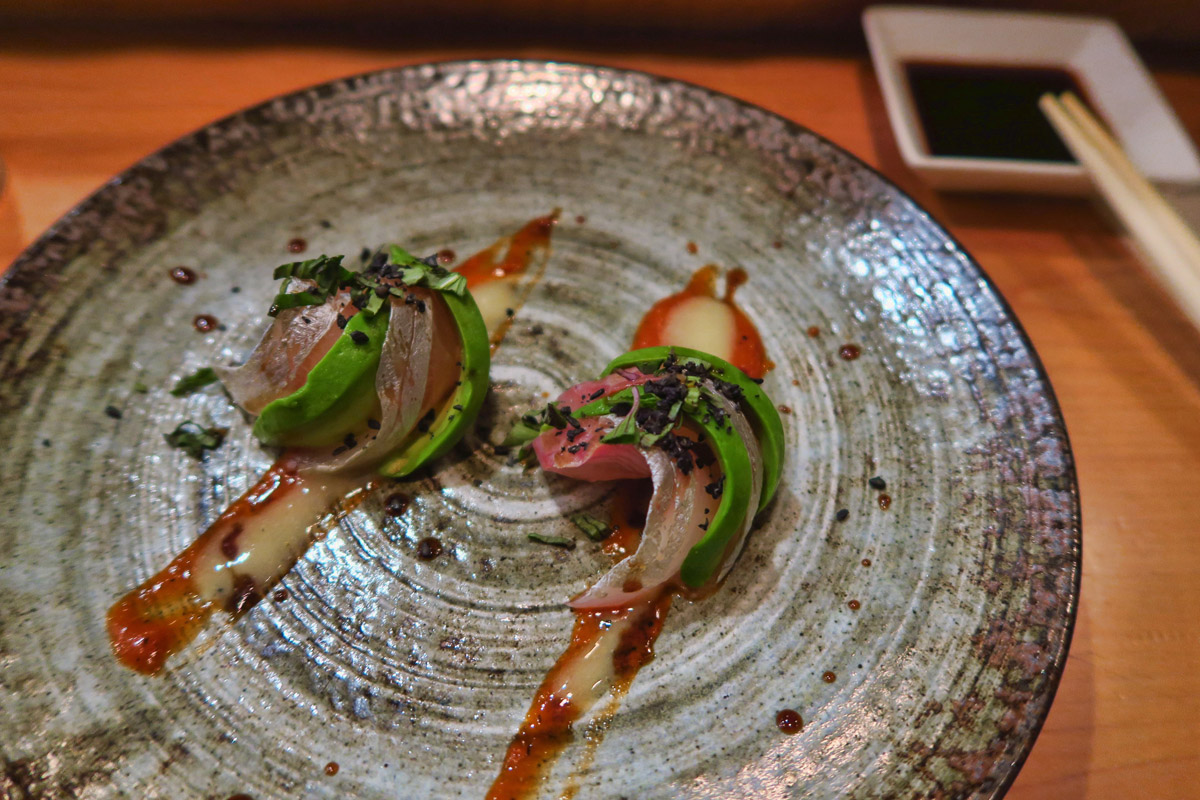 It was the best suchi meal of my life! 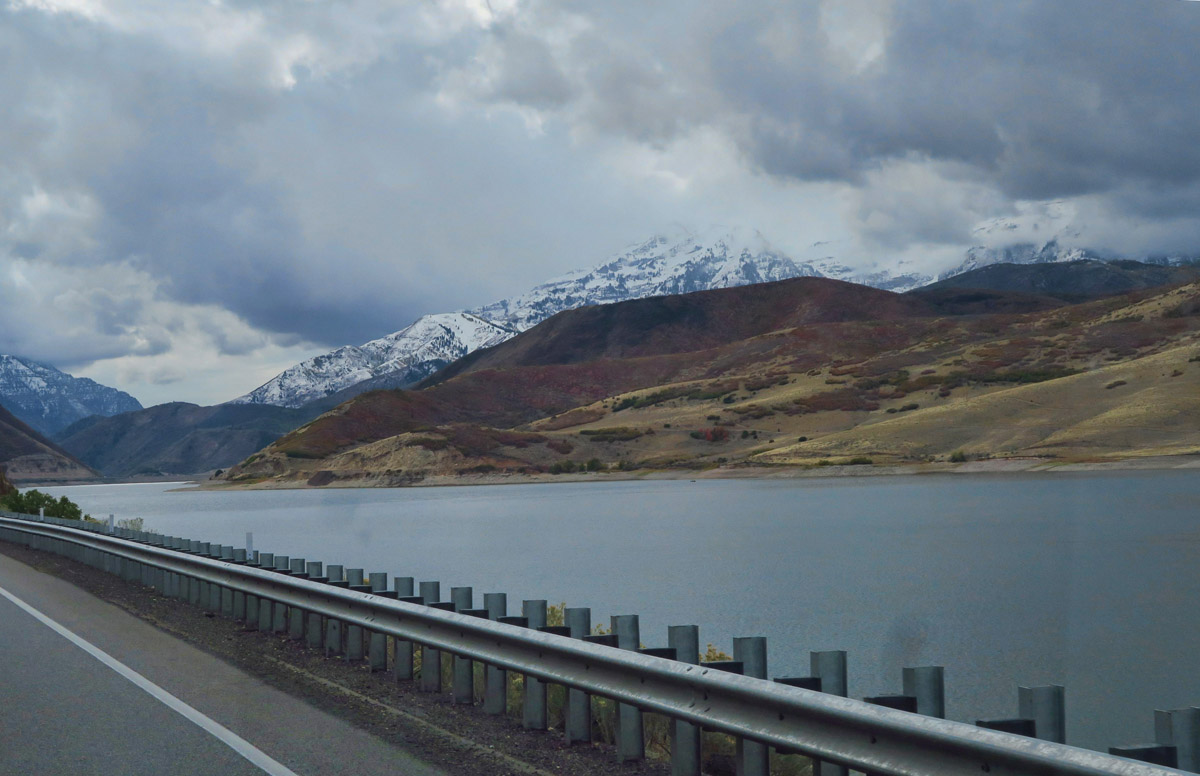 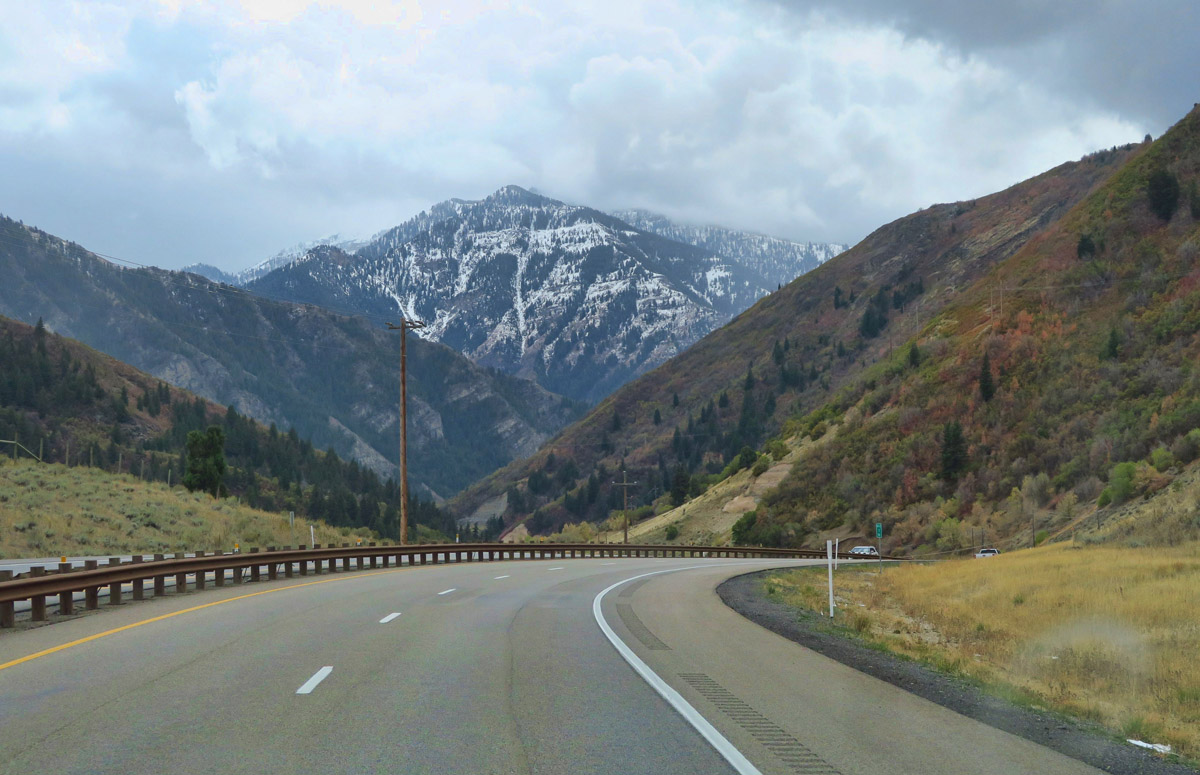 Driving toward Provo along Hwy 189 is just a gorgeous drive!

Having enjoyed what was the best sushi meal of my life with my birthday now behind me, the pressure is off to find some “special” place to spend my birthday. I can finally slow down and meander on further south toward one of my planned stops, Mystic Hot Springs. Being the hot springs nut that I am, I’ve wanted to visit this place for years. 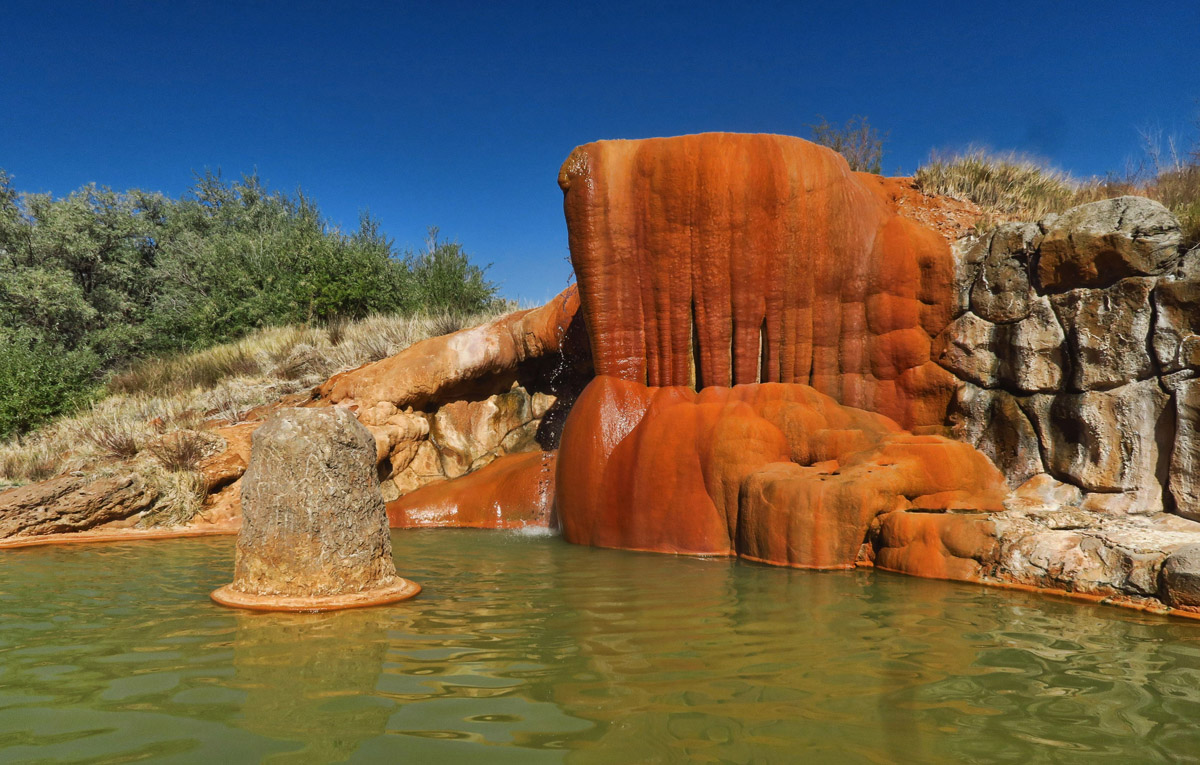 There are two “main pools” at Mystic Hot Springs, and six individual tubs for soaking. 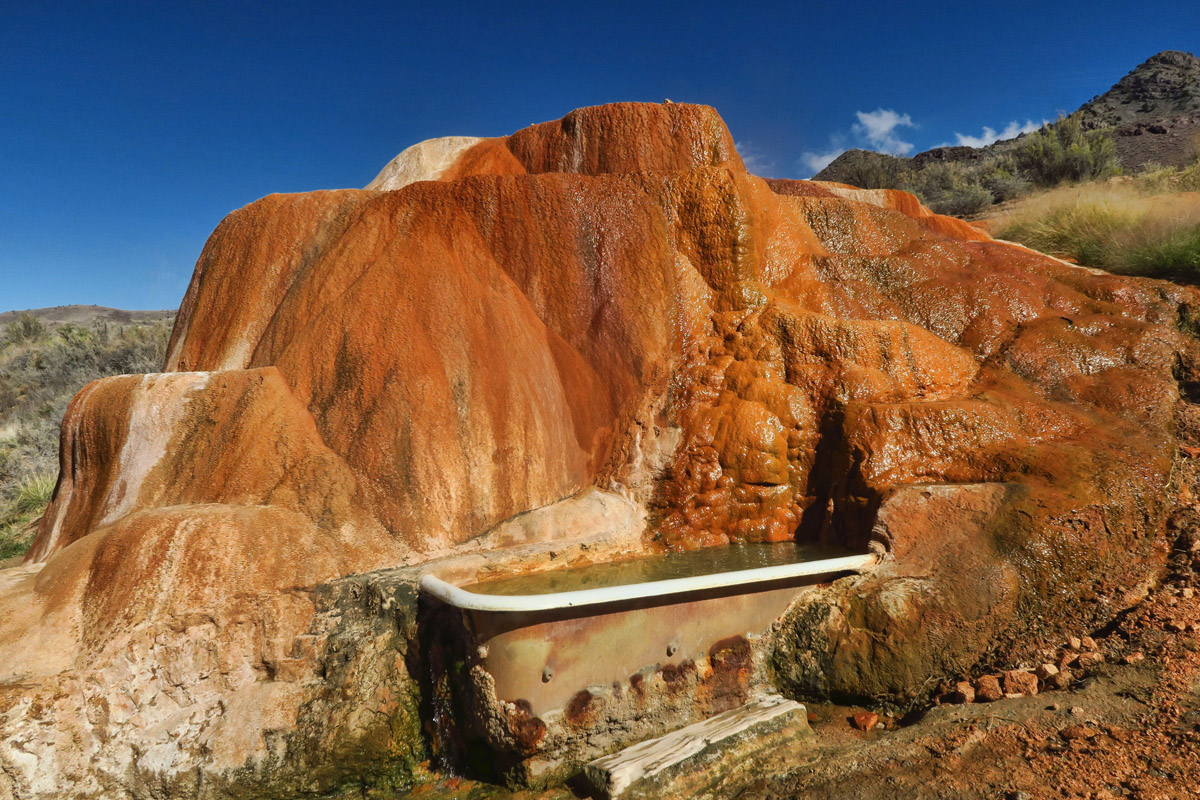 Water comes out of the ground at 168°, flows through some “cooling channels,” then down this mineral formation into the tubs. 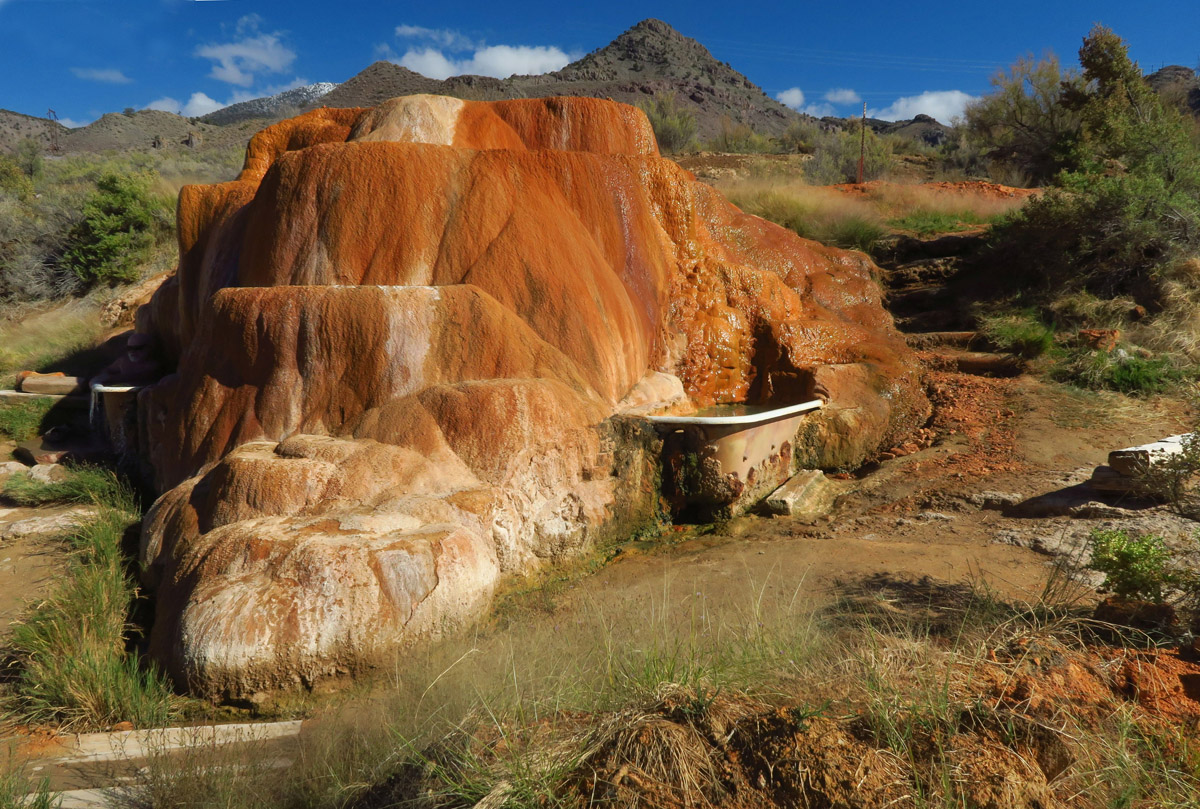 I hope I never forget what it felt like to slip into this tub filled with hot, silky water and relax up high on the hill from the time the sunset lit up the sky, then darkened to a blanket of star-filled sky as I watched the thumbnail moon come up over the snow-covered mountains. 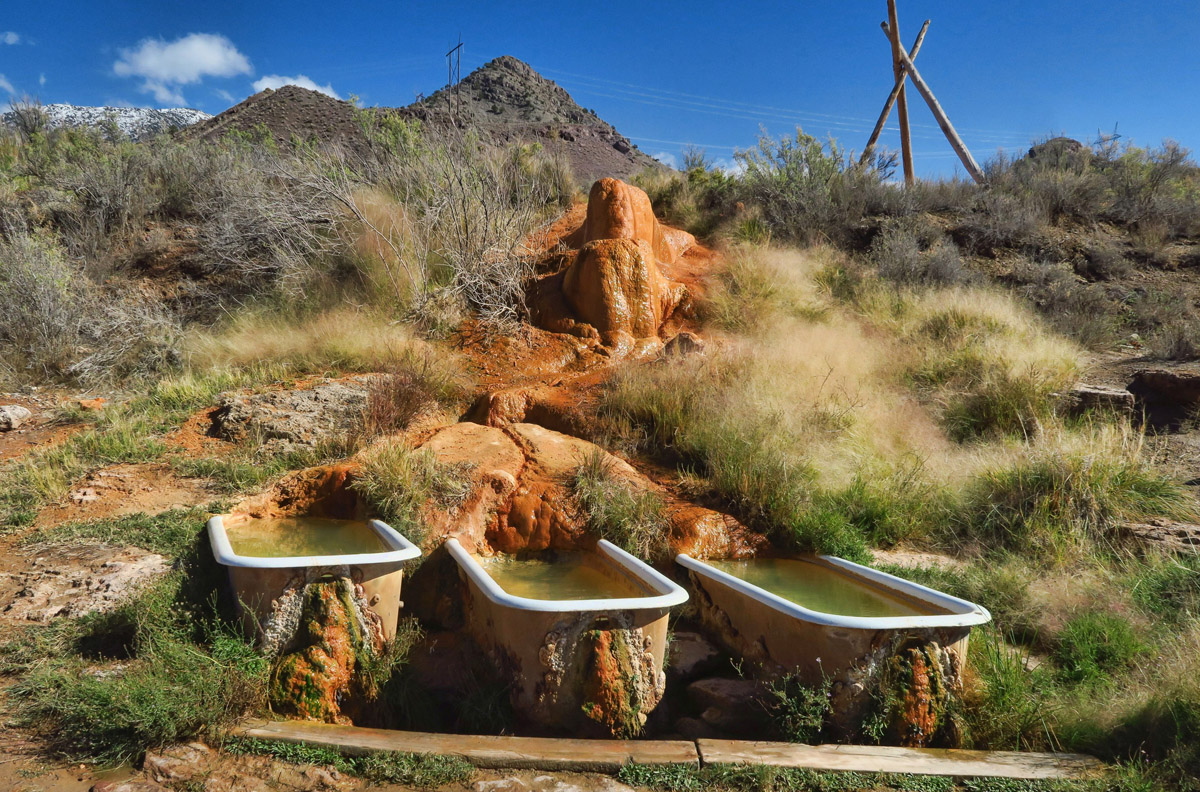 This could be a very solitary experience, or a more communal one.

My intention is to only spend one night at the springs, then continue on further south. But slipping into the warm, soothing waters, I ask myself “Why not two? Slow down. Relax a little!” Besides, with the arctic clipper still nipping at my heels, it’s nice to have full hook-ups to be able to keep the Winnie warm while I warm my weary bones from the 1,500 mile drive.

On the third day, Wednesday, I learn there is a concert scheduled on Friday. Mystic Hot Springs was founded by a man who once did graphic design for the Grateful Dead, so musical events are a regularly scheduled happening at Mystic Hot Springs. So I decide to stay for the event. This is a mind-blowing experience, as the seven-piece jazz ensemble “Upstate” gives an intimate concert with almost as many band members as audience staying at the springs . At one point, someone in the audience shouts out, “I feel like I’m on another planet!” So the lead singer tells us all to close our eyes during the next song and imagine that we are all on another planet. Here in this tiny town in the middle of Nowhere, Utah, listening to live music, it’s not that much of a stretch of the imagination…. 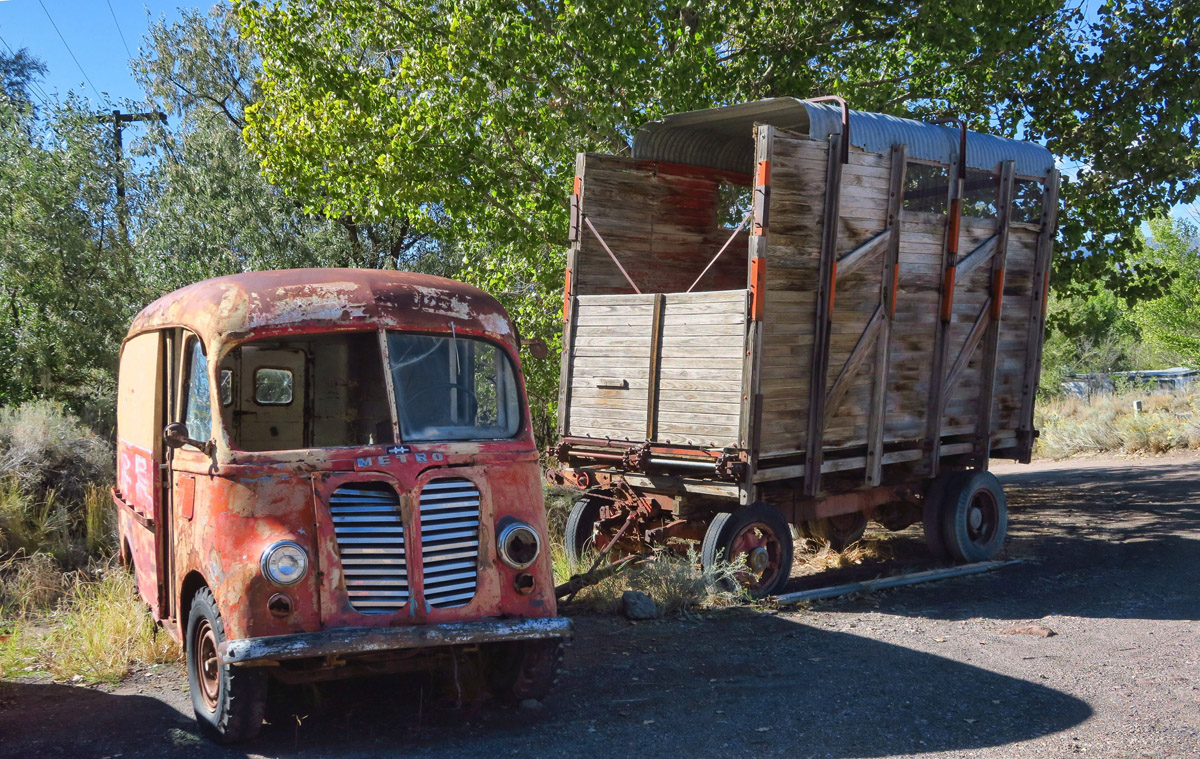 There is a whole lot of “vintage” to be found on the property. 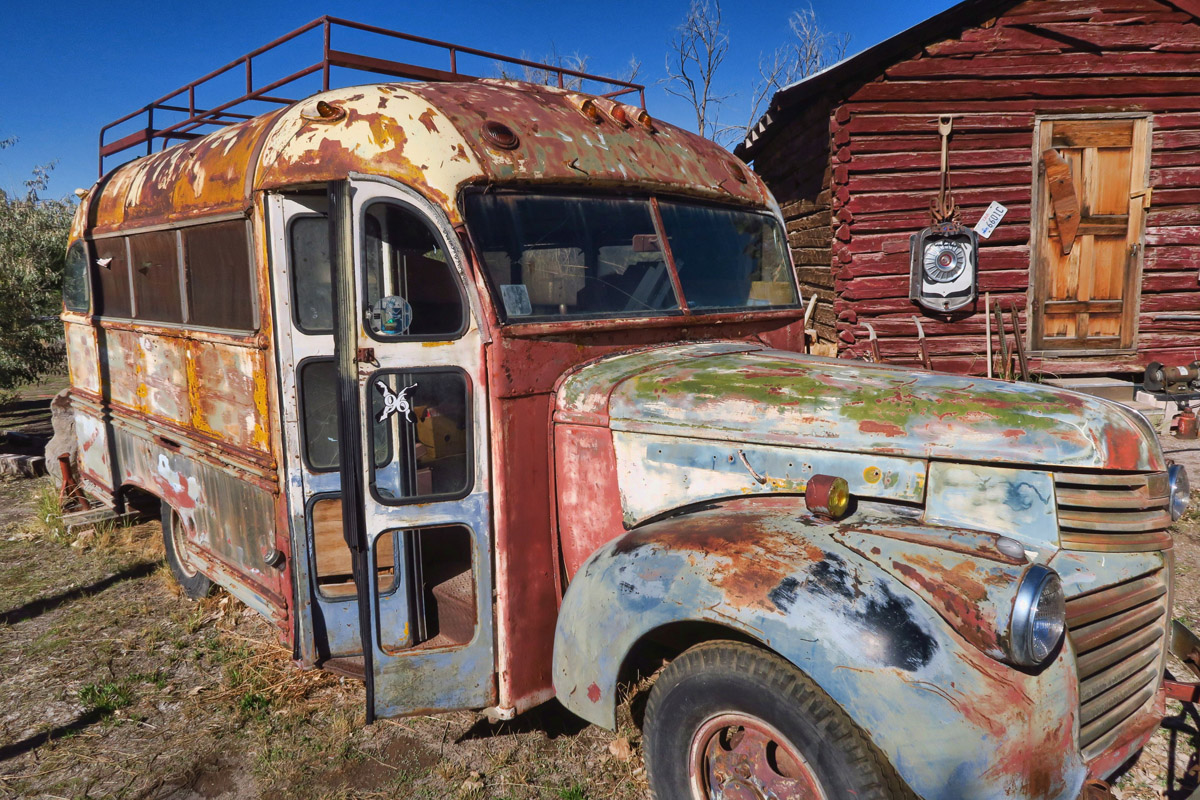 Mike, the owner is a collector of vintage buses. 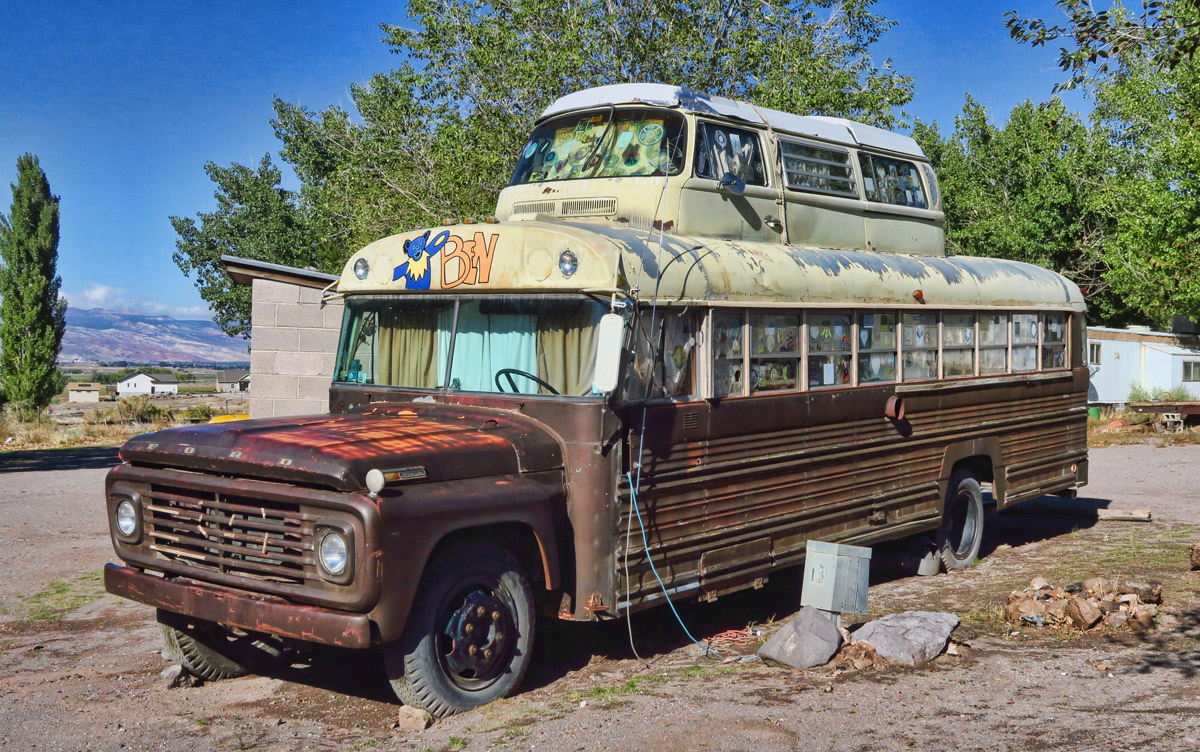 This creative double decker bus “Ben” was the owner’s transportation when he arrived at the springs 22 years ago.

The thing I appreciate most about Mystic Hot Springs is the laid-back, “old hippie” vibe. However the owner runs a tight ship with “No Drugs. No Alcohol. No Nudity. No Exceptions.” It’s an atmosphere where a single woman can enjoy the 60’s vibe, yet still feel completely safe. 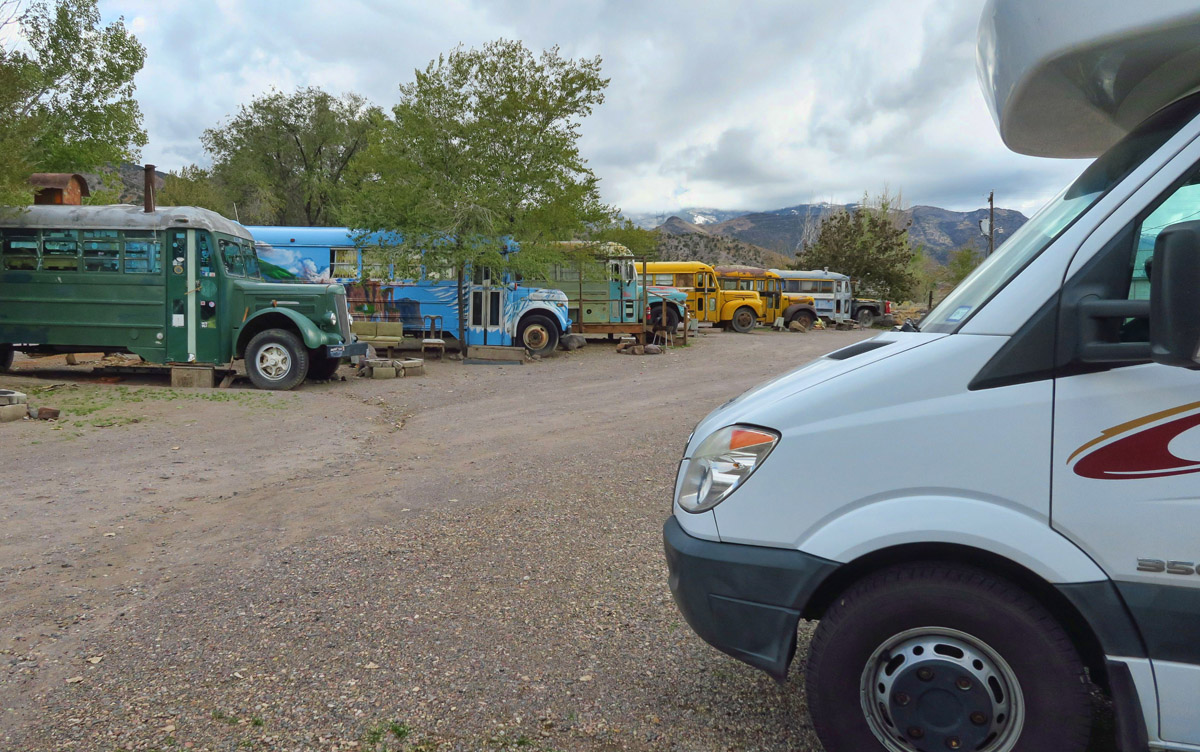 Most of these vintage buses have been outfitted as rooms for rent. I look inside a few of them, and they look better than one might expect. 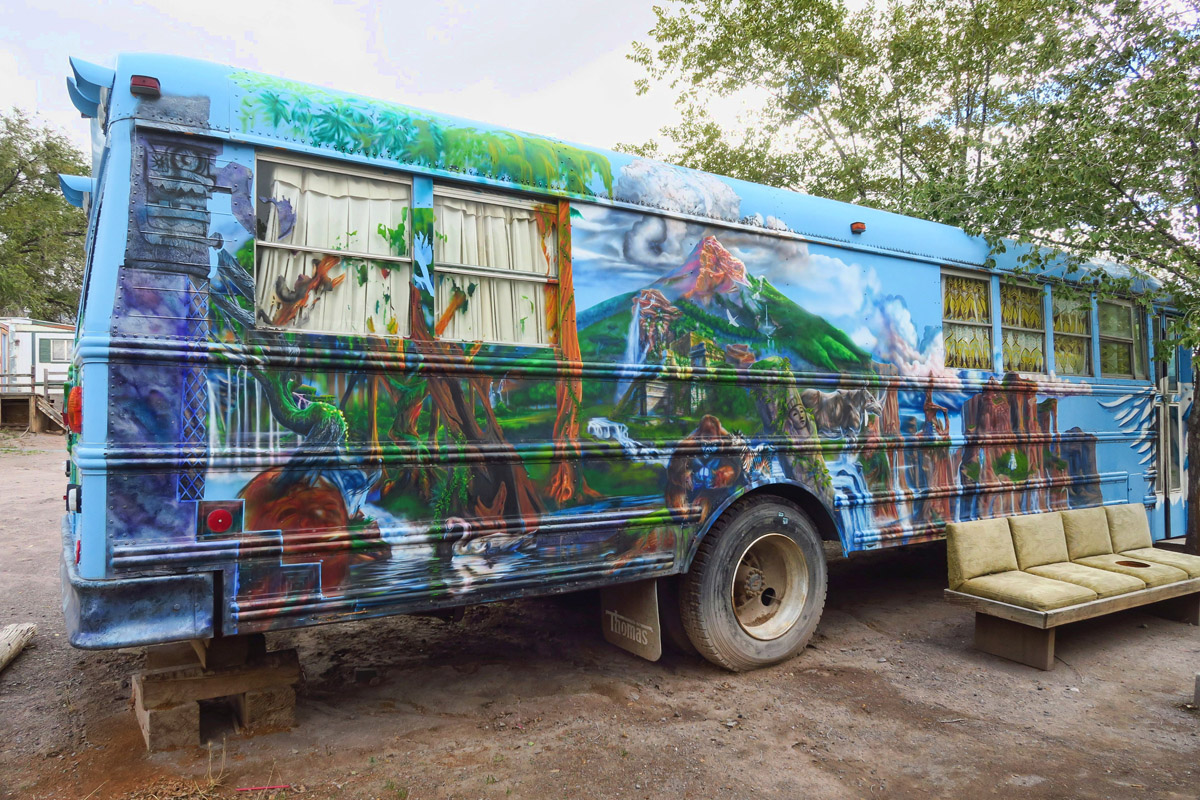 Surprisingly, at least one or two of them are booked almost every night during my stay, though it’s a very transient clientele. 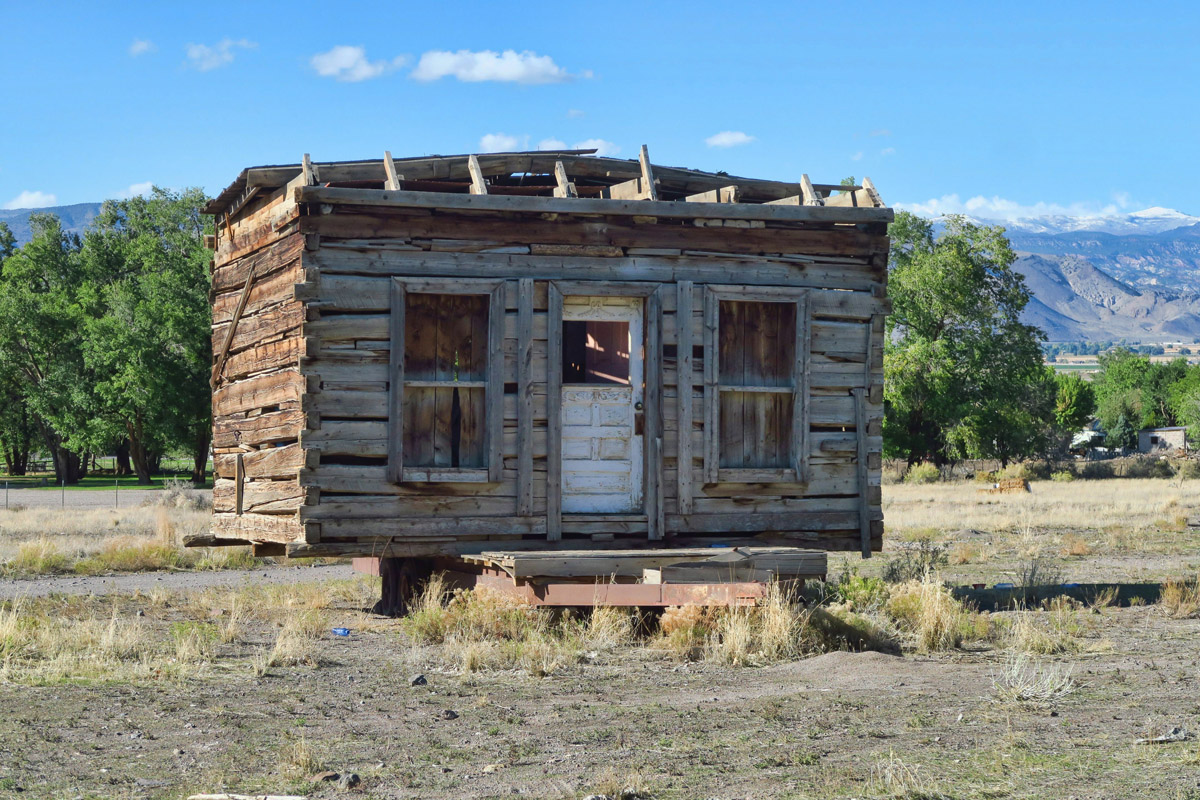 The owner is also assembling quite a collection of old cabins. Not sure what their intended use is… 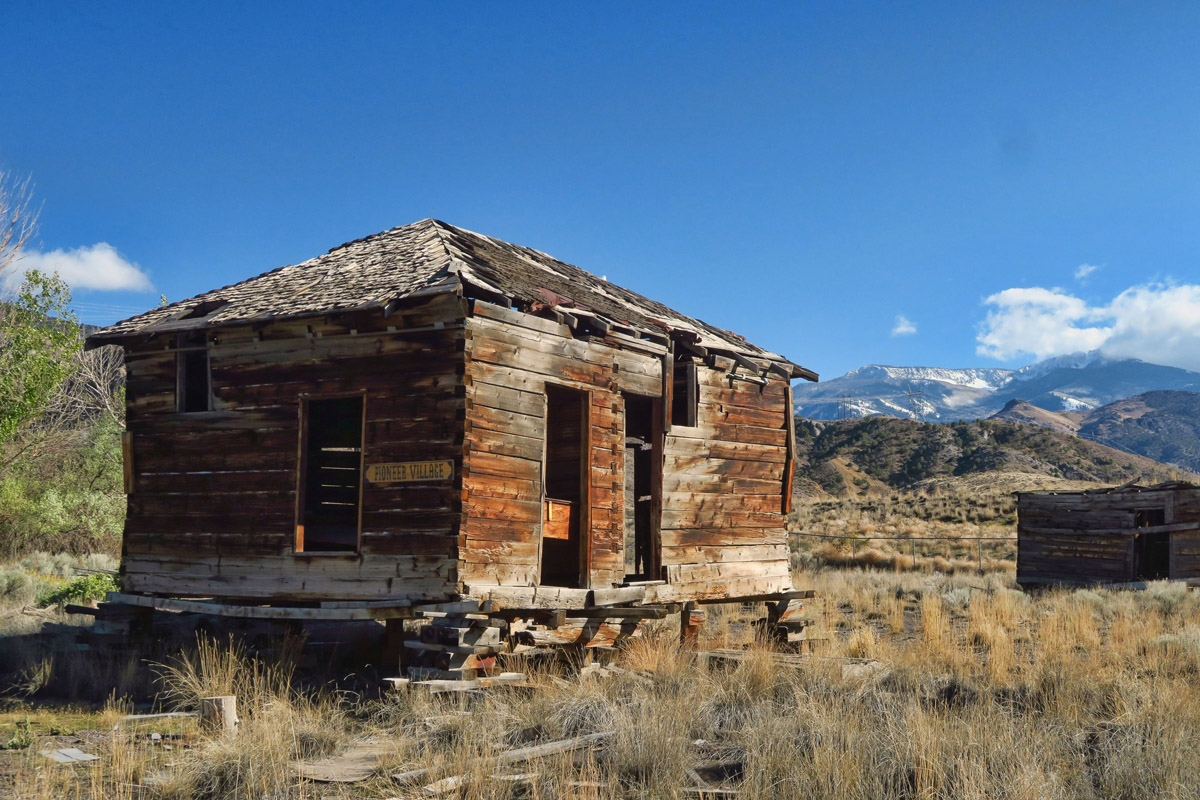 Currently, they are all assembled in the lot across the street labeled “Pioneer Village.”

During one of my soaks, I learn of their “stay five nights, get two free” deal, at which time I manage to convert my originally intended one night stay to one week. Sitting in the tubs every night watching the sun go down through twilight until the new crescent moon rose up over the nearby snow-covered mountains was just magical. 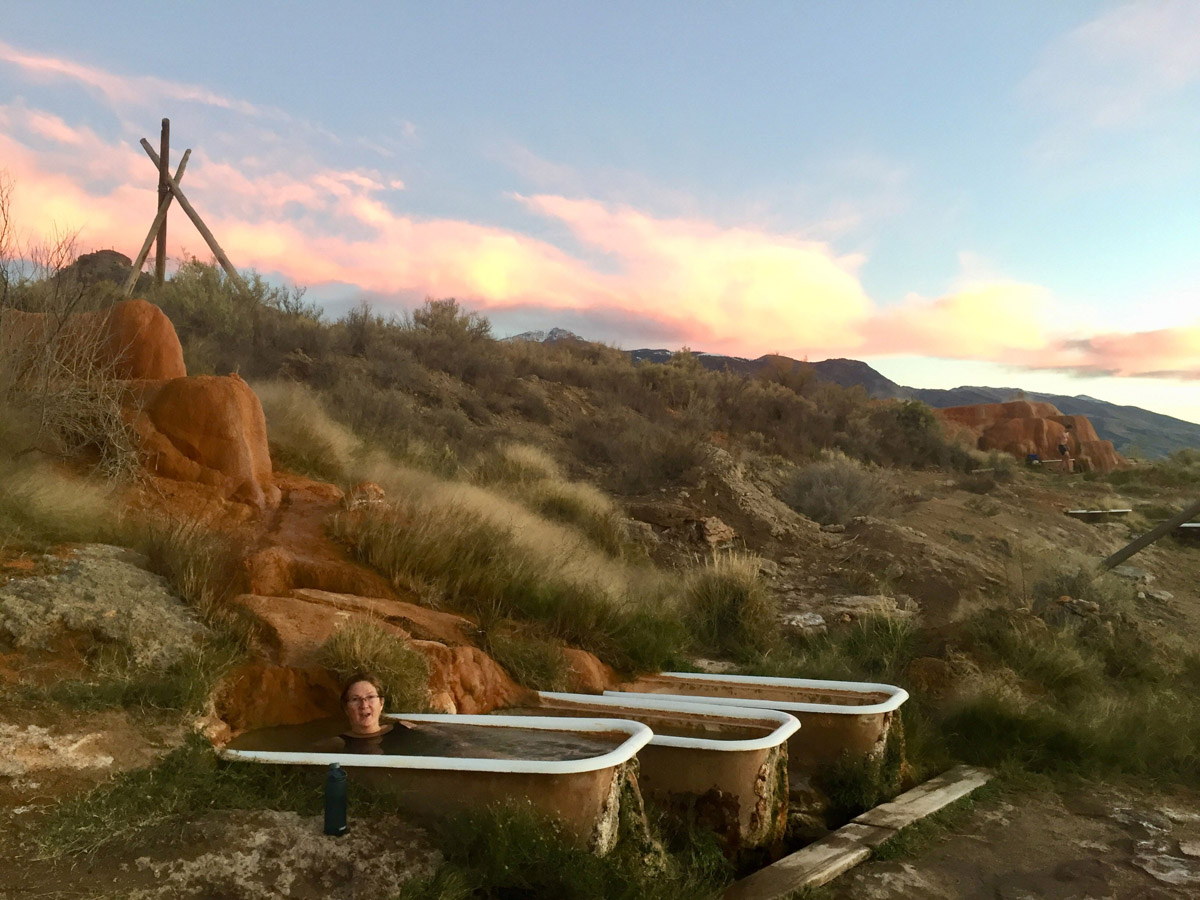 I met so many interesting people while here. The woman who took this photo had just finished the 2,700 mile Great Divide Mountain Bike Route from Banff to the Mexican border.

15 thoughts on “Into the Mist, and On to the Mystic”