I’ve heard many fellow RVers sing the praises of Escalante before….“boondocking near Escalante, hiking in Escalante, conferring with the Interagency Visitor Center in Escalante.” But I was never sure exactly where in Escalante all this recreating was taking place. Was it the Grand Staircase-Escalante National Monument, and if so, where? At over a million acres, that’s a huge monument to attempt to explore.  But once I began researching Hwy 12, I realized most were referencing the tiny town just south of Boulder that bears the name Escalante, named for Silvestre Vélez de Escalante, a Franciscan missionary and member of the first European expedition into southern Utah.

Escalante is on my planned route because it will get me within striking distance of two slot canyons, “Peek-a-Boo and Spooky” that have been on my wish list for several years now. The problem in visiting this area along Hole-in-the-Rock Road is one that I encounter often…crossing off places on a bucket list only makes room for more places! Wow, are there ever a lot of interesting canyons to explore in this area! 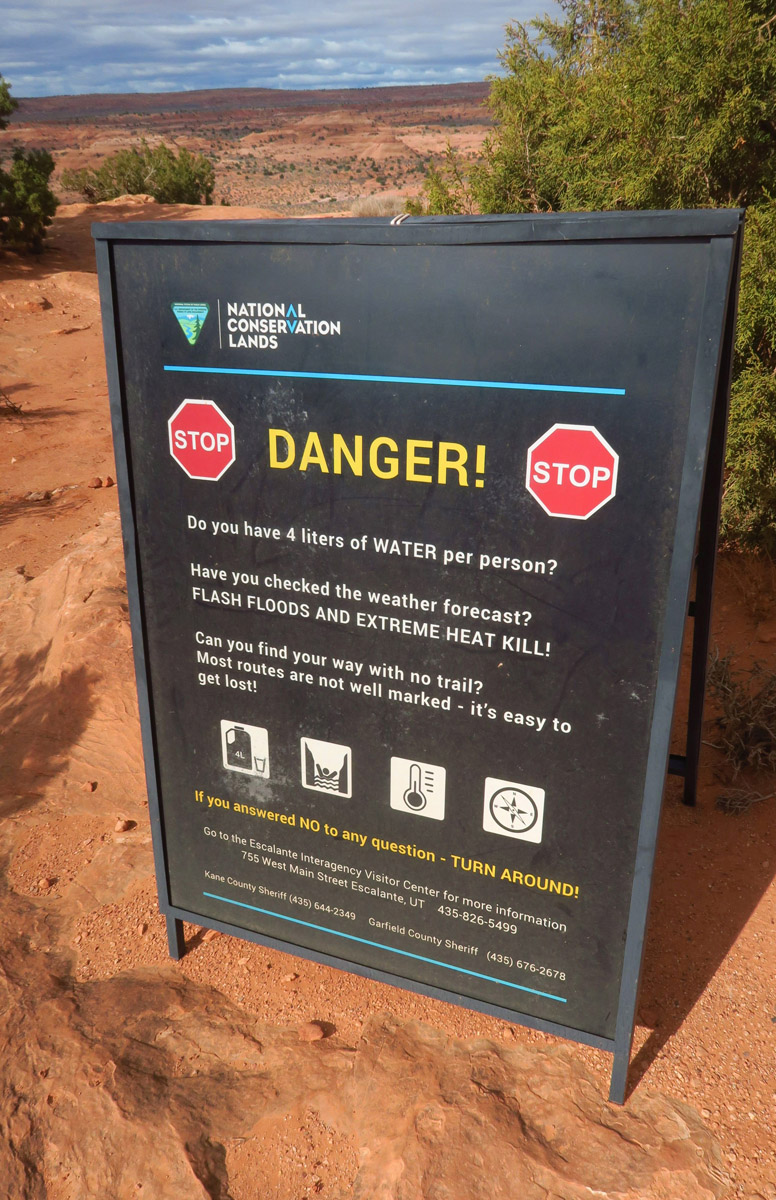 Always a reassuring way to start a hike. 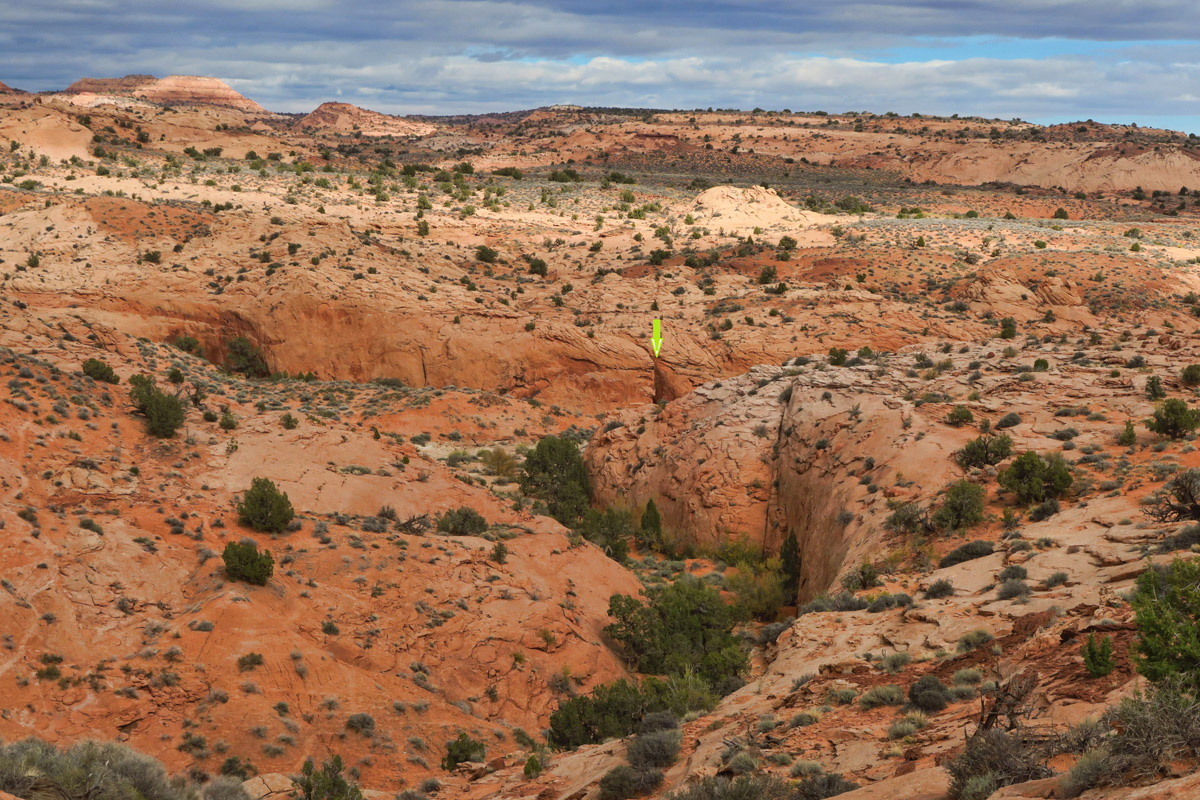 The lime green arrow points to the slot which is the entry of Peek-a-Boo Gulch. 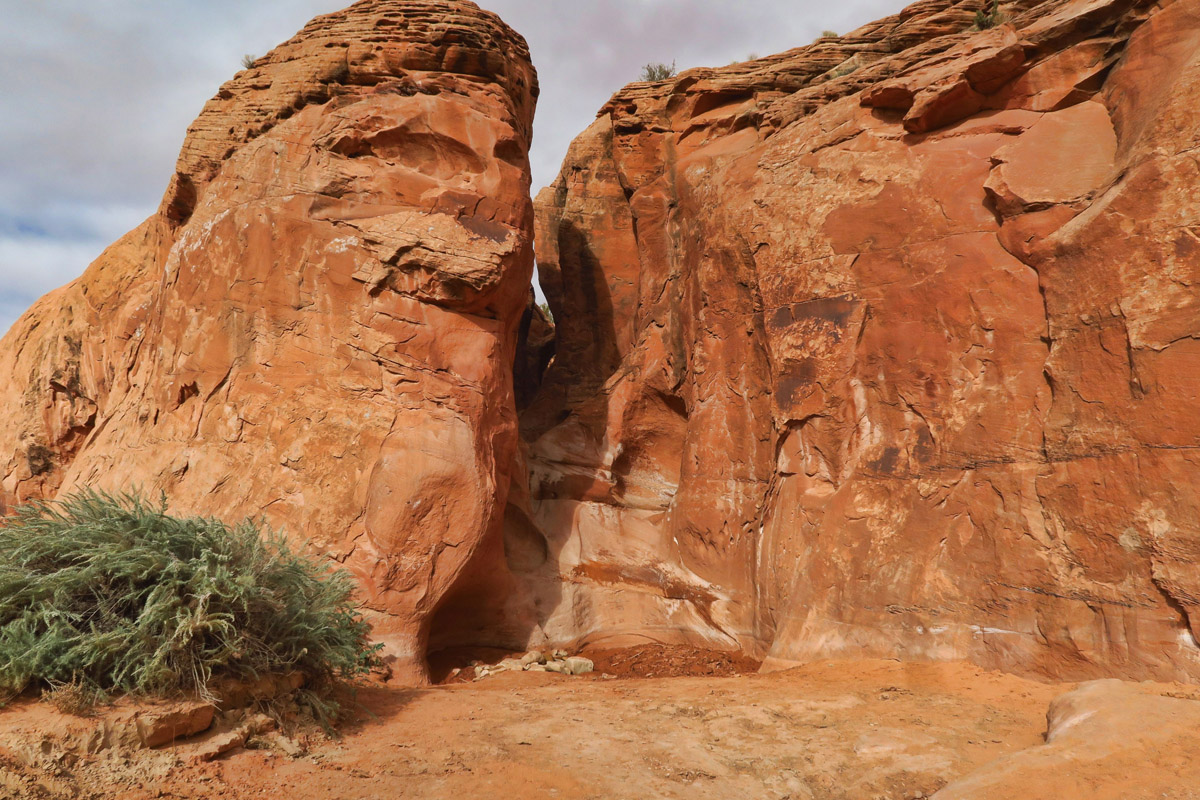 Entrance to Peek-a-Boo Gulch is midway up that opening. 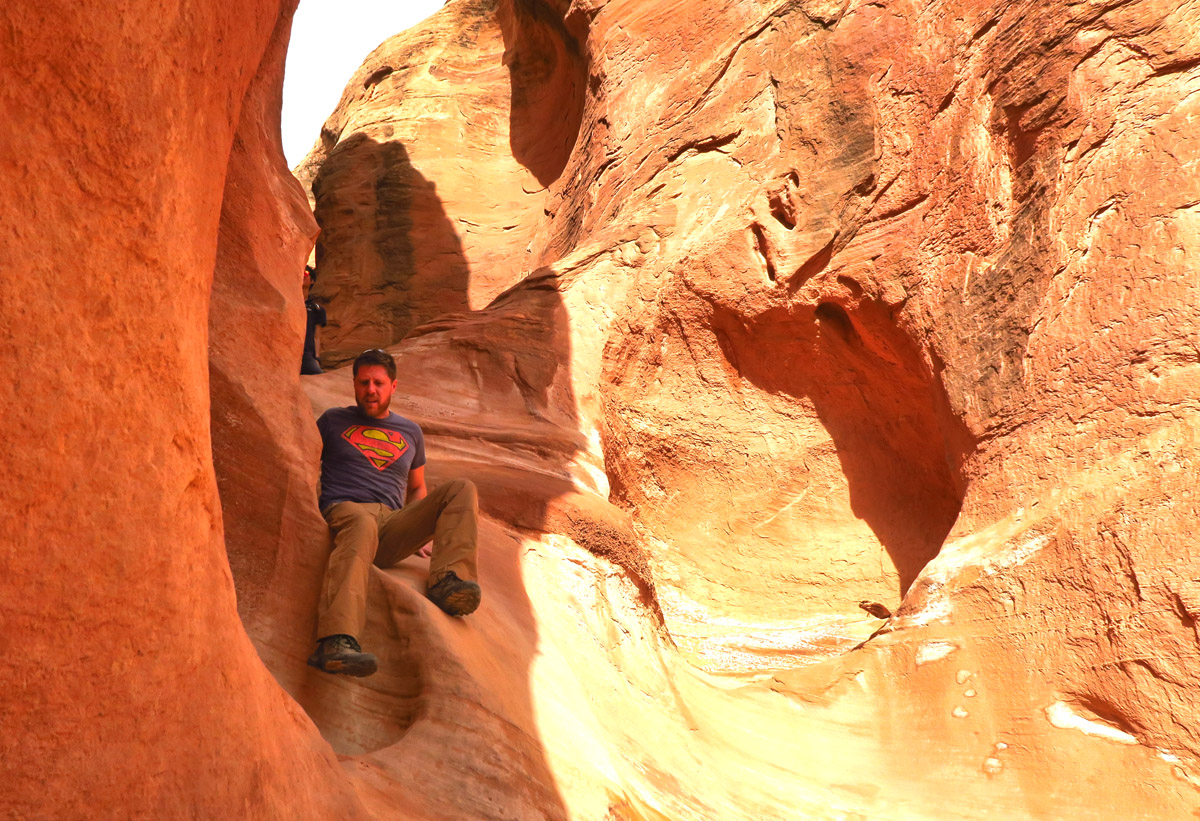 Why is this young man wearing a Superman T-shirt you might ask? Because he is about to help an old lady cross the street…Or in this case, scale a 16 ft vertical approach into the slot canyon. 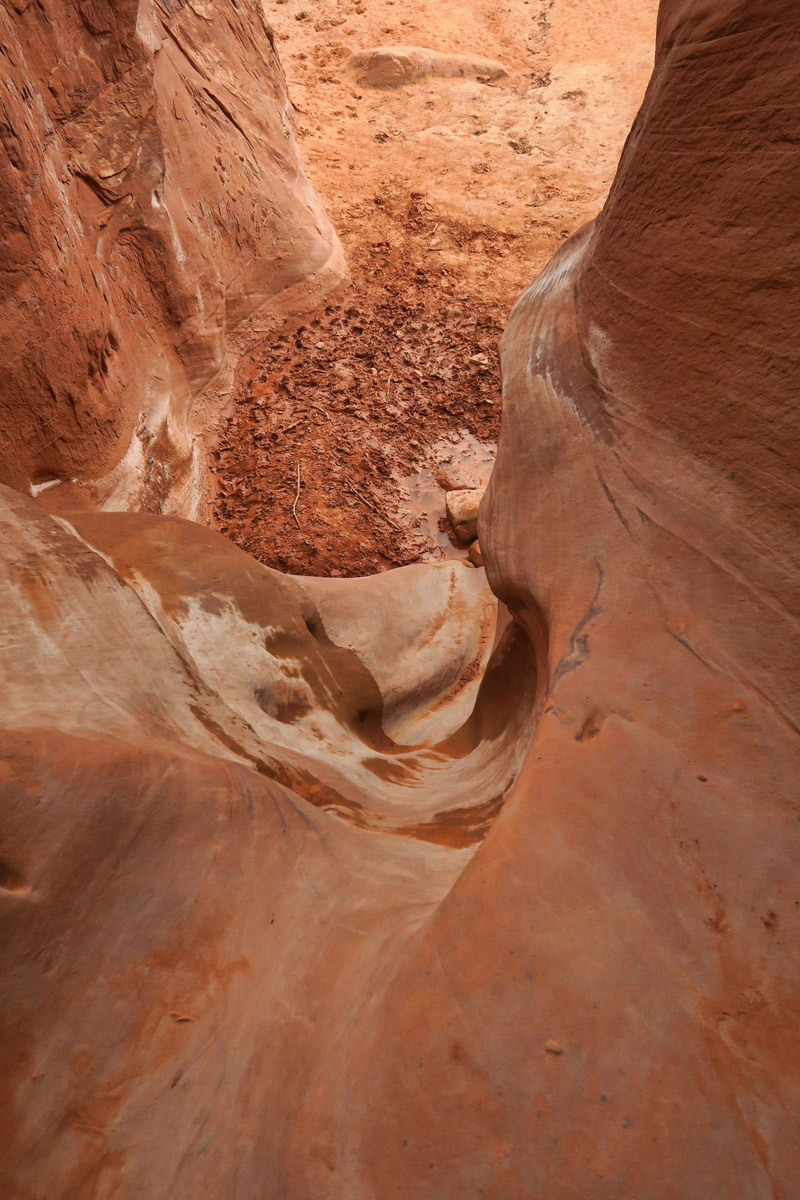 Looking back down on the pile or rocks and wet sand at the bottom. I left a few patches of DNA on this approach.

A stop by the big beautiful Escalante Interagency Visitor Center south of town offers up answers to almost all my questions. Staffed with Bureau of Land Management, National Park Service and Forest Service personnel, it’s a wealth of information. I learn there is plenty of boondocking just outside of town with a free permit. I learn that the Hole in the Rock Road is in good shape after some seasonal grading on the heels of heavy rains. And I learn the two slot canyons I have come to hike are dry and accessible.

On a side note, I think this “permit required” for boondocking is a great concept. “Keepin’ ‘em honest,” so to speak. If one has to go to the effort to obtain a permit, even though it’s free, I believe there is an air of accountability attached.  I am guessing if the BLM Office records the permit holder’s name, address, phone number, and license plate number, a person is less likely to stay beyond the 14 day limit, less likely to chop down the forest for wood, and less likely to dump their old tires, batteries, broken lawn chairs, sectional couches, raw sewage, etc. etc.

It’s a 26 mile bumpy washboard road from my boondocking spot to Dry Gulch, the turn off to reach the trail head for Peek-a-Boo and Spooky Gulch.  Though a bit of a bumpy ride, I am told Hole-in-the-Rock Road is “the best it’s been in months” and I am fortunate to have arrived right after the county graded the road for the cattlemen.  It’s the time of year when they transport the herd from summer to winter grazing areas, so the county does road improvements for their benefit.  I encounter several cattle trucks billowing up the dust from the recently graded road. 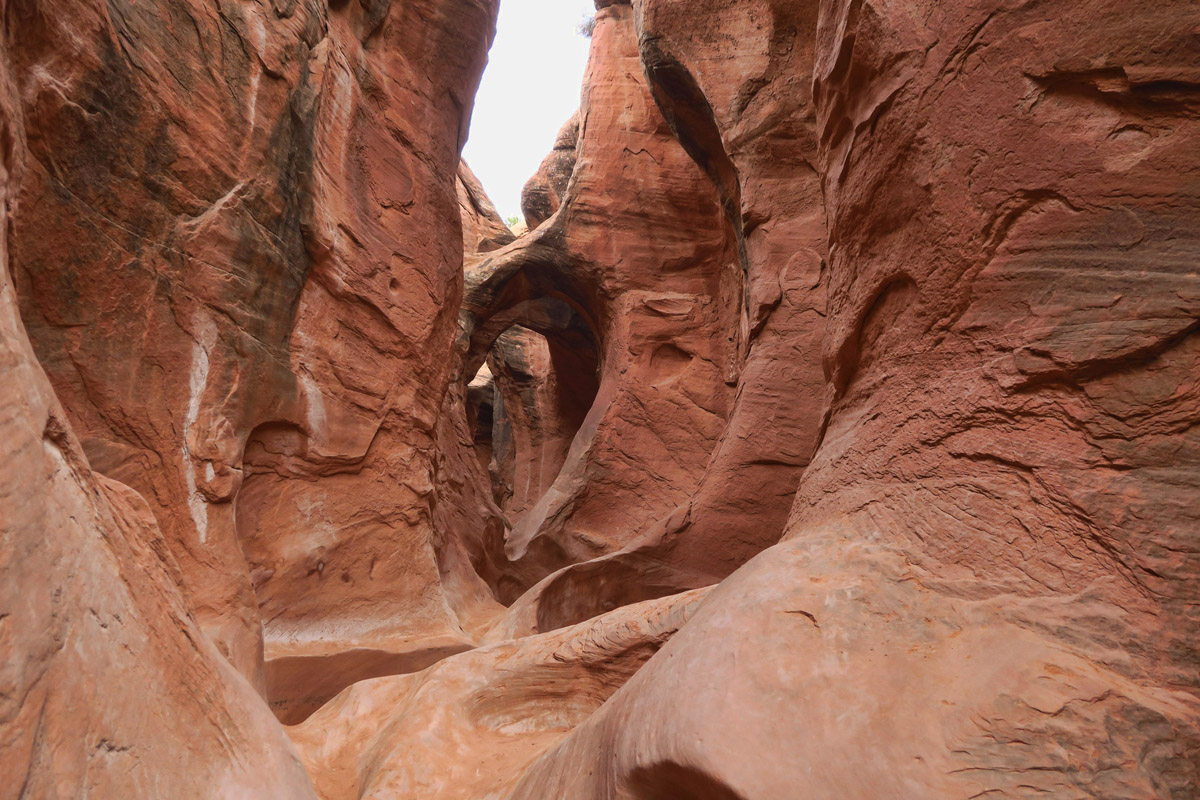 The “arches” of Peek-a-Boo Gulch are just beautiful. 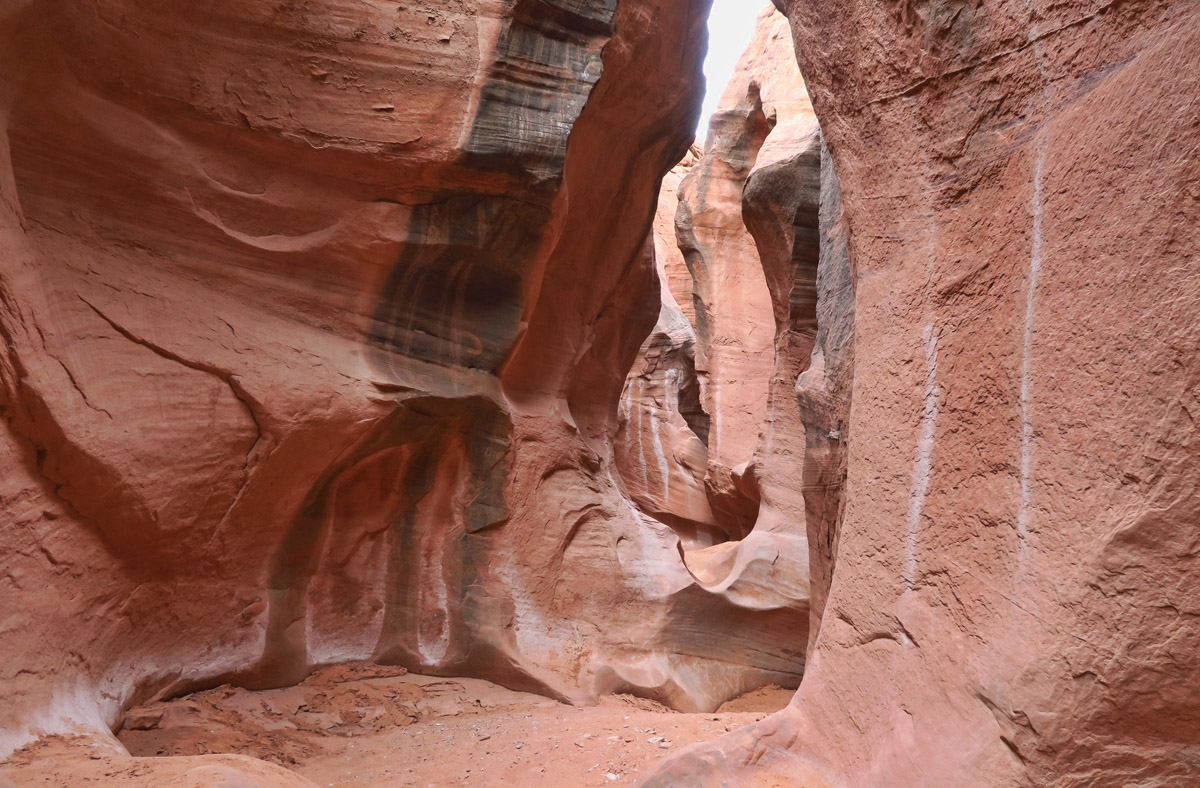 Peek-a-Boo is wider and more colorful than Spooky. 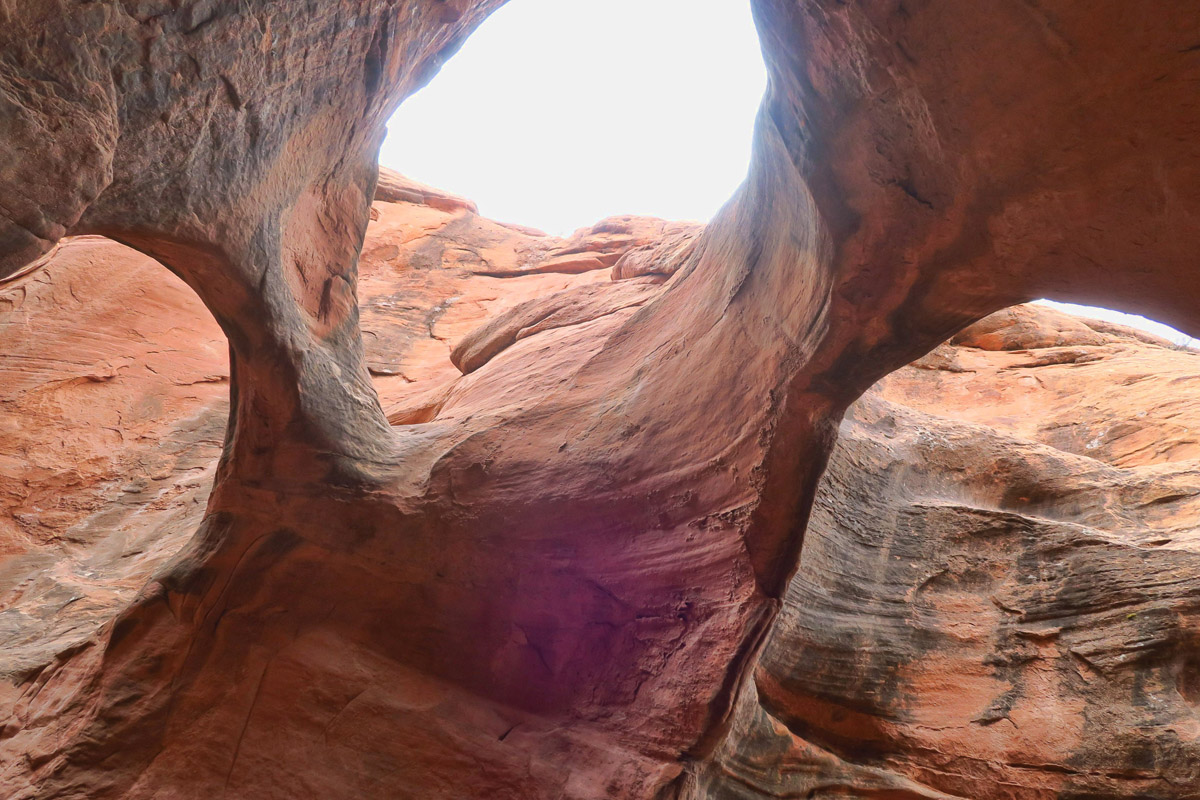 Looking up through the arches. 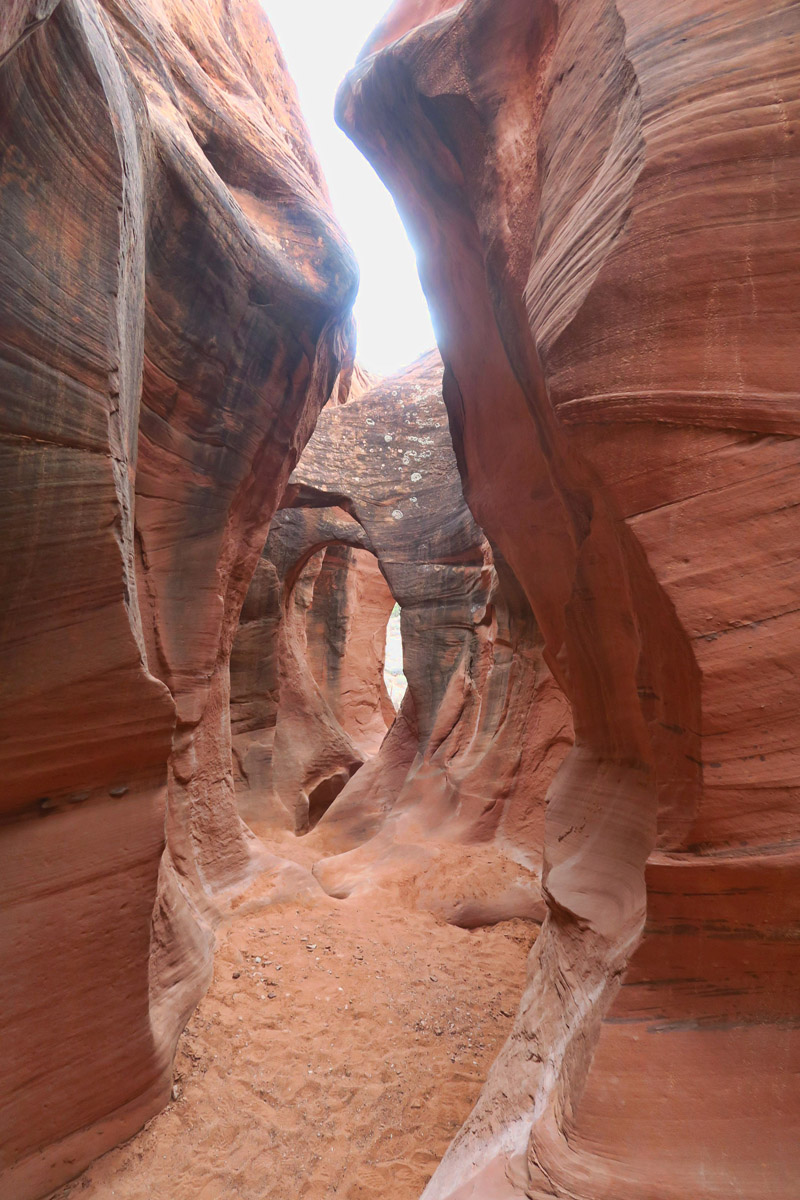 Even after entering, a bit of hurdling is required to get over the fins. 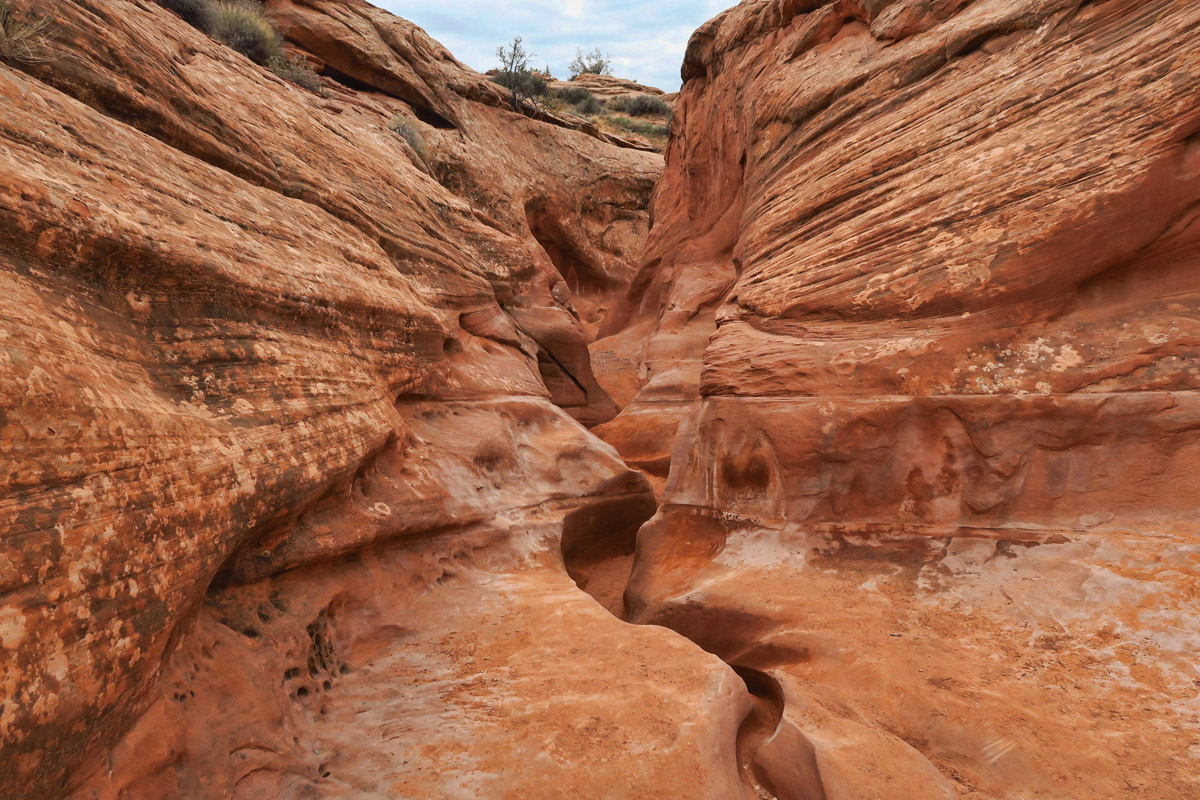 At one point, you think the slot section has ended, but then it starts up again. 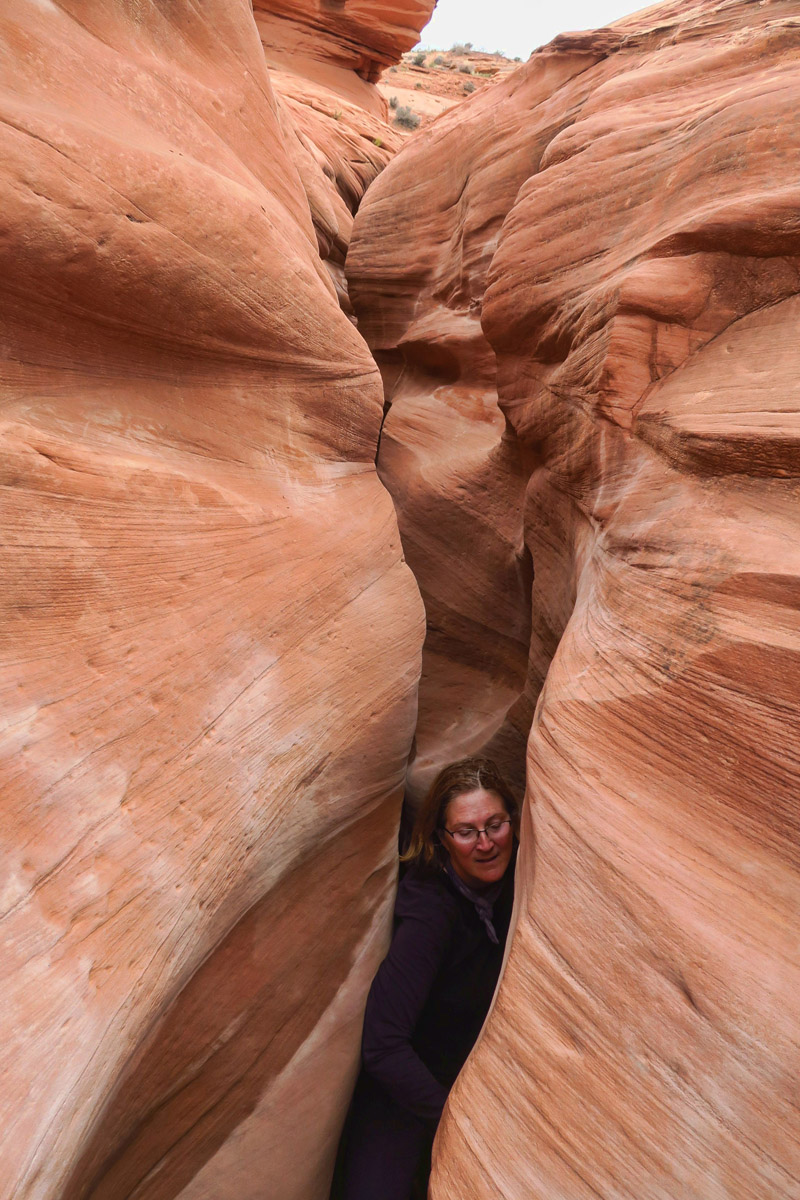 This ain’t nuthin’ compared to what is yet to come in Spooky Gulch.

Each of the two slot canyons present their own major obstacle. For Peek-a-Boo, it’s the 16 ft vertical approach to enter the slot. There are footholds, but they are extremely far apart, requiring a “shin to chin” maneuver.  This challenge is compounded by the amount of loose, damp sand littered all over the rock face by previous hikers, which makes gaining purchase near impossible.

For Spooky, the obstacle is a large cluster of choke stones mid-canyon that must be navigated via a six foot drop. If you can get past those two obstacles, the rest is more mental than it is physical. Spooky narrows down to a width of inches in spots, making it a freakish test of one’s claustrophobia.  Some sections were so narrow I had to walk “ballet plie-style” as my feet were too long to walk sideways, and my body too wide to walk front-ways. 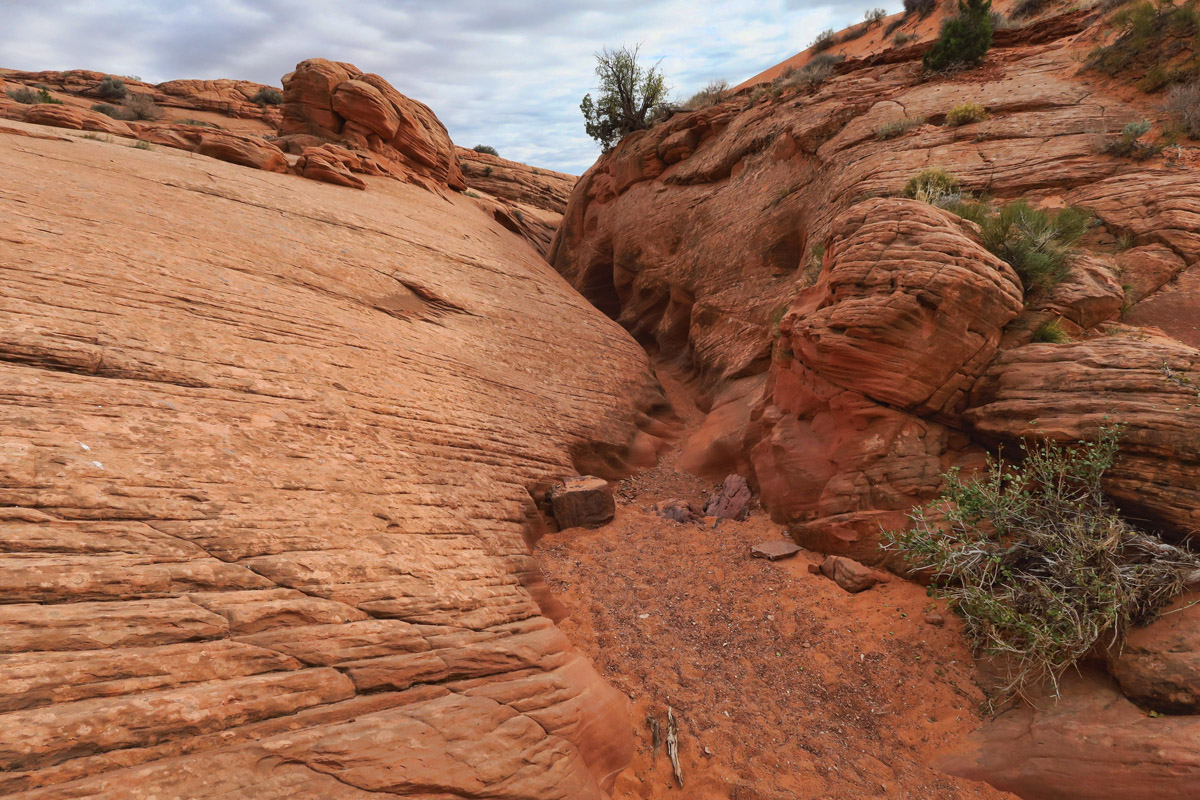 The entry to the “upstream” end of Spooky Gulch. 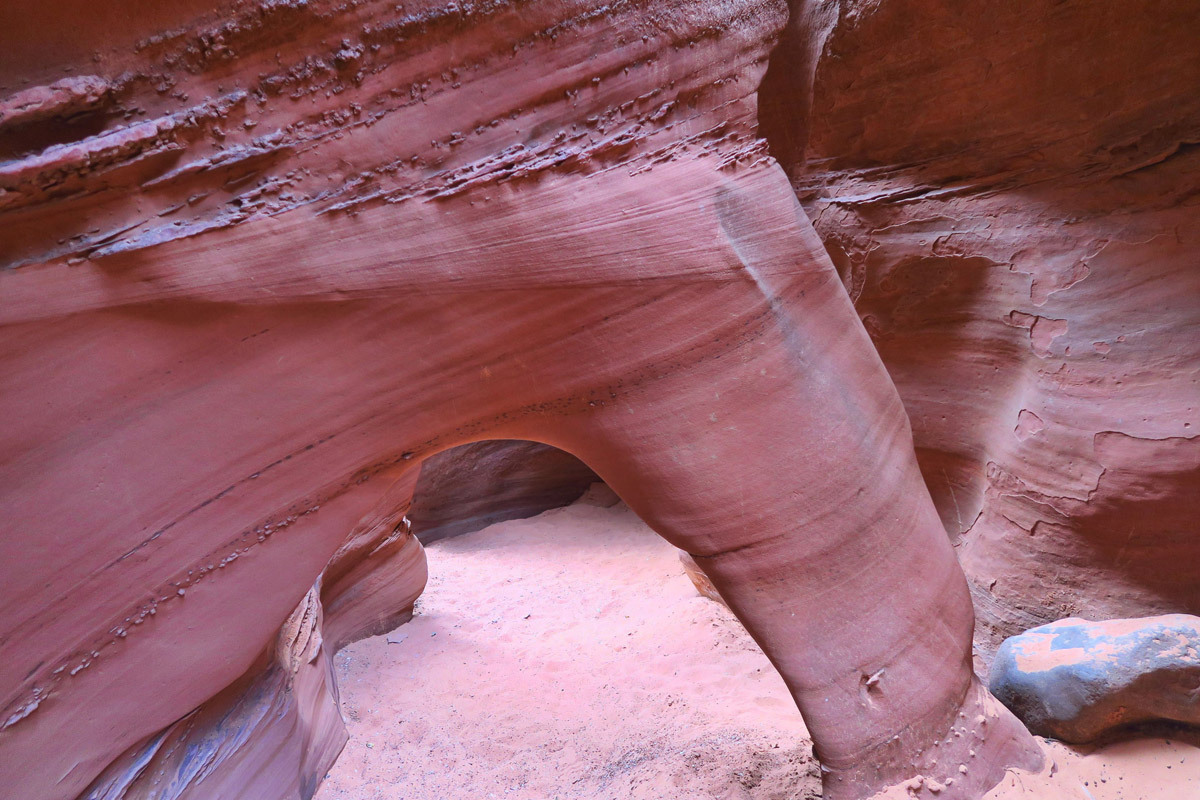 It is recommended that Peek-a-Boo and Spooky Gulches be explored in a loop starting with going up Peek-a-Boo, exiting at the back end, traversing the 15 minute hike over to the wide, dry creek entrance of Spooky, then coming back down. The woman at the Escalante Interagency Visitor Center told me that the reason for this recommendation was two-fold. One, the obstacle in Spooky is reportedly easier to descend than it is to ascend, and two, due to the narrowness of the canyon, they’d like to have everyone moving in the same direction to avoid impasse.

If this only worked, it would be ideal. I was fortunate to only encounter people from the opposite direction at the choke stone obstacle where there was plenty of room to pass.  Otherwise, I can’t imagine trying to navigate this sliver of a passageway while meeting someone coming in the opposite direction. There simply is no way to pass except crawling over/under. Heaven forbid that hiker have an energetic dog along with them who doesn’t understand how it ended up in such a place, let alone how to observe “etiquette” in passing.  (If you are a dog owner, please, I implore you, consider a more forgiving place to take the dog for a hike…in consideration for the dog as well as other hikers who might not be comfortable around dogs, yet find themselves facing one in an impassable passageway!) 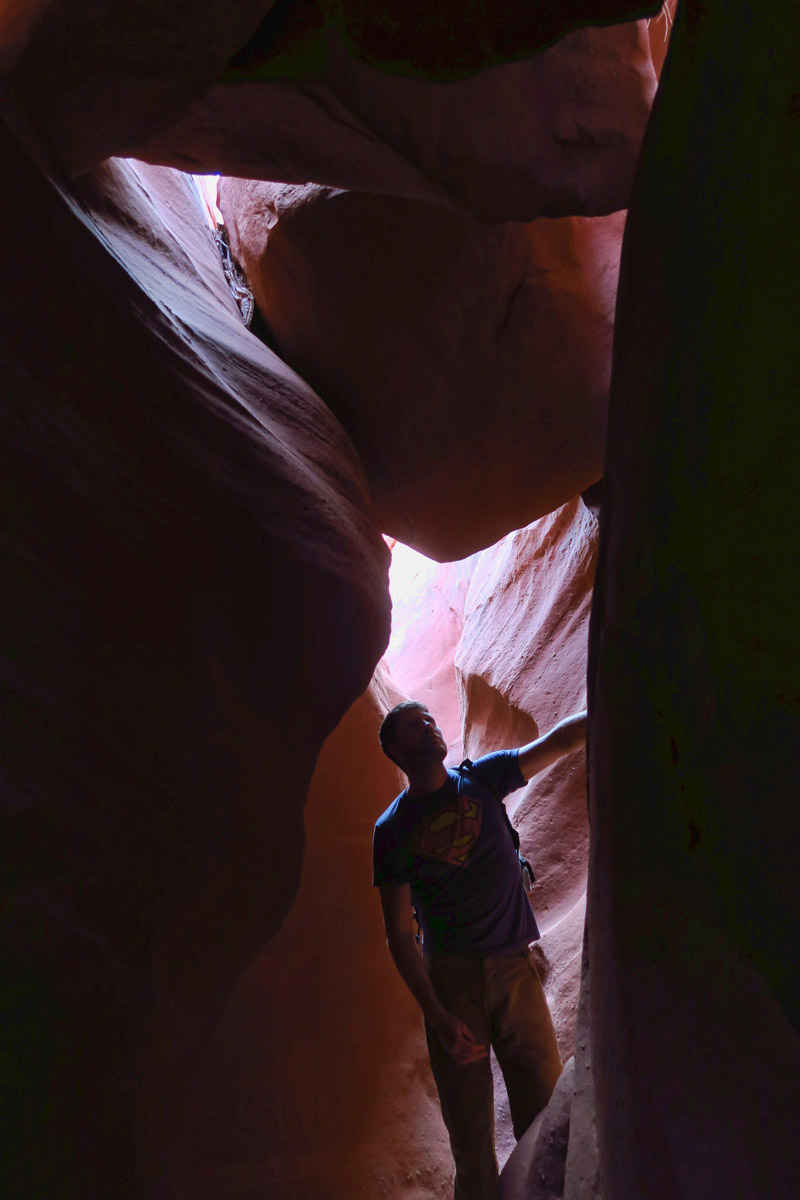 I encounter Spooky’s obstacle, a 6 ft “blind drop.” Thank goodness Superman is there to talk me down. 😉 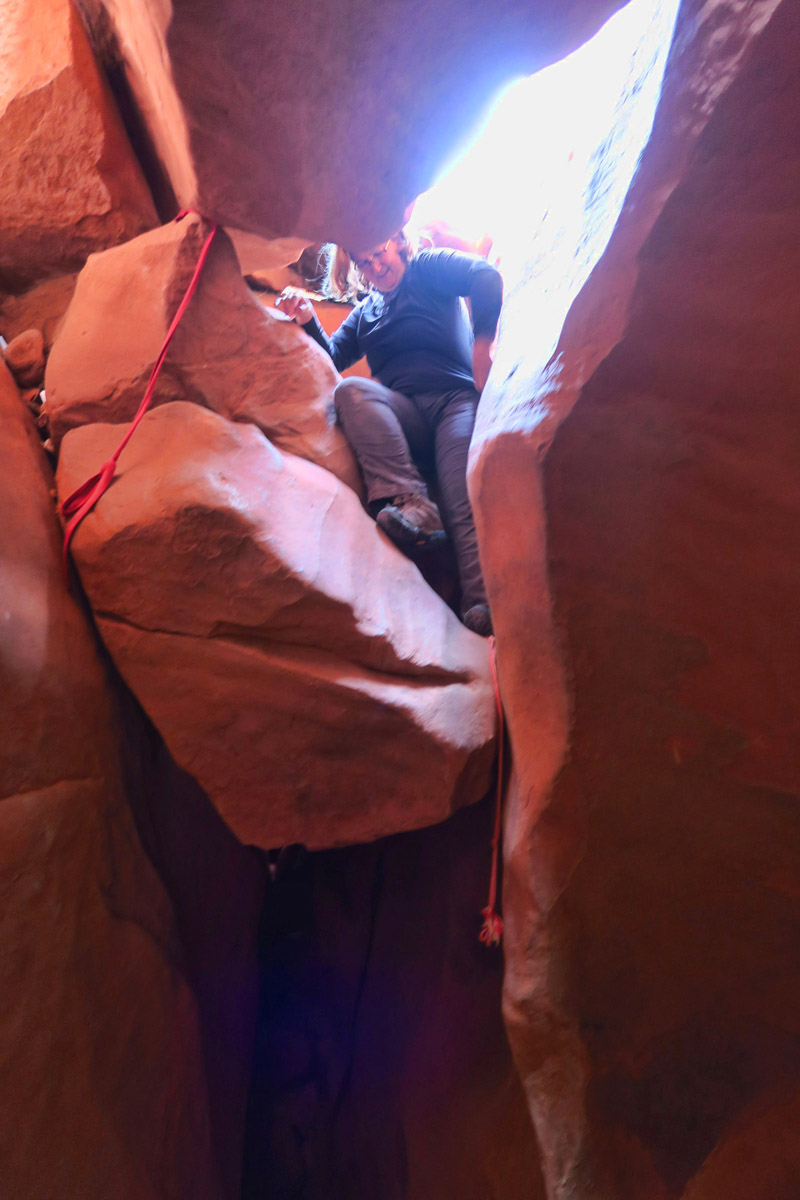 He cautions, “Don’t use a rope unless you know who placed it.” Oh, sure, easy for you to say. 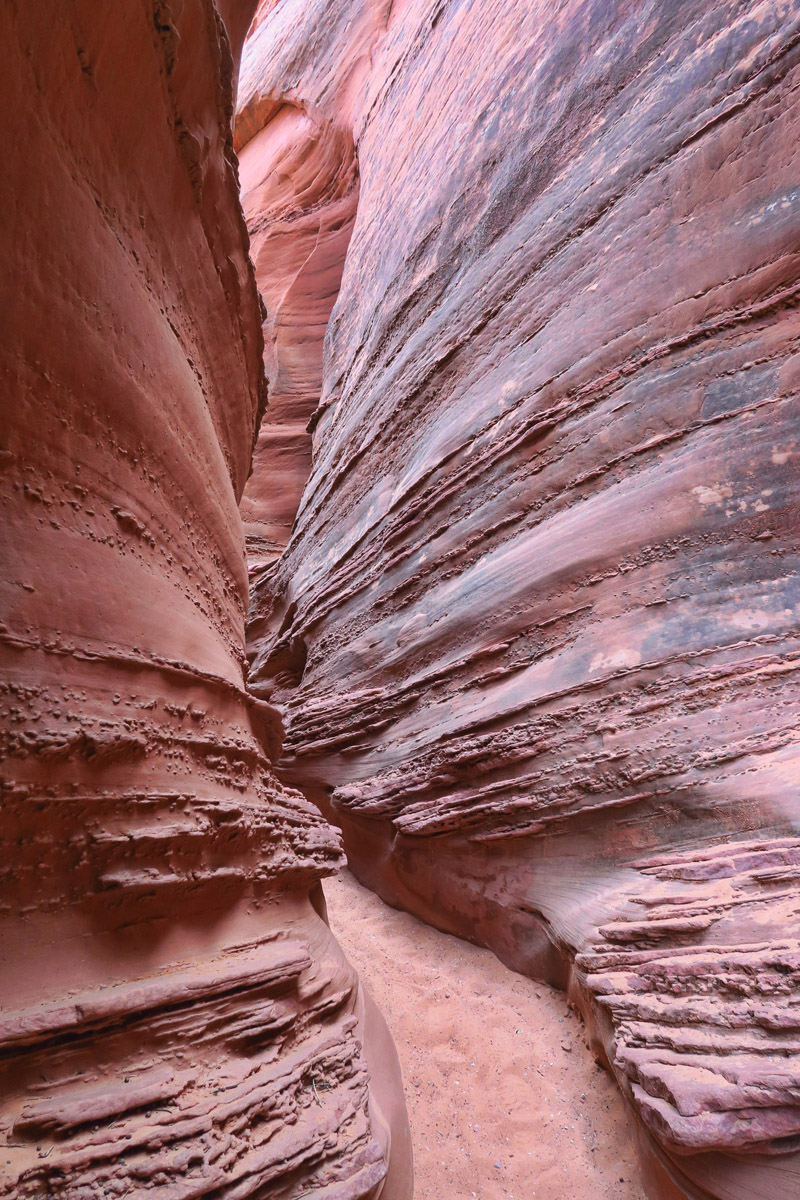 After the choke stones, it’s about to get really narrow. 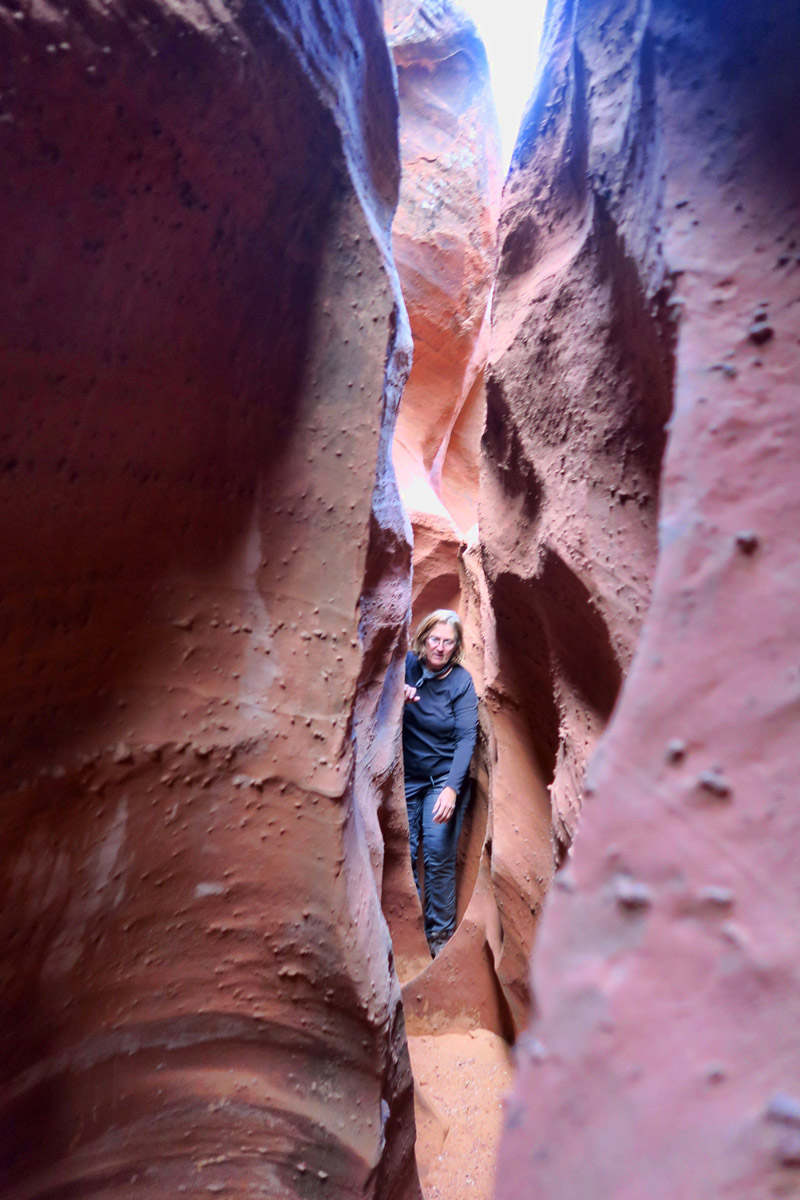 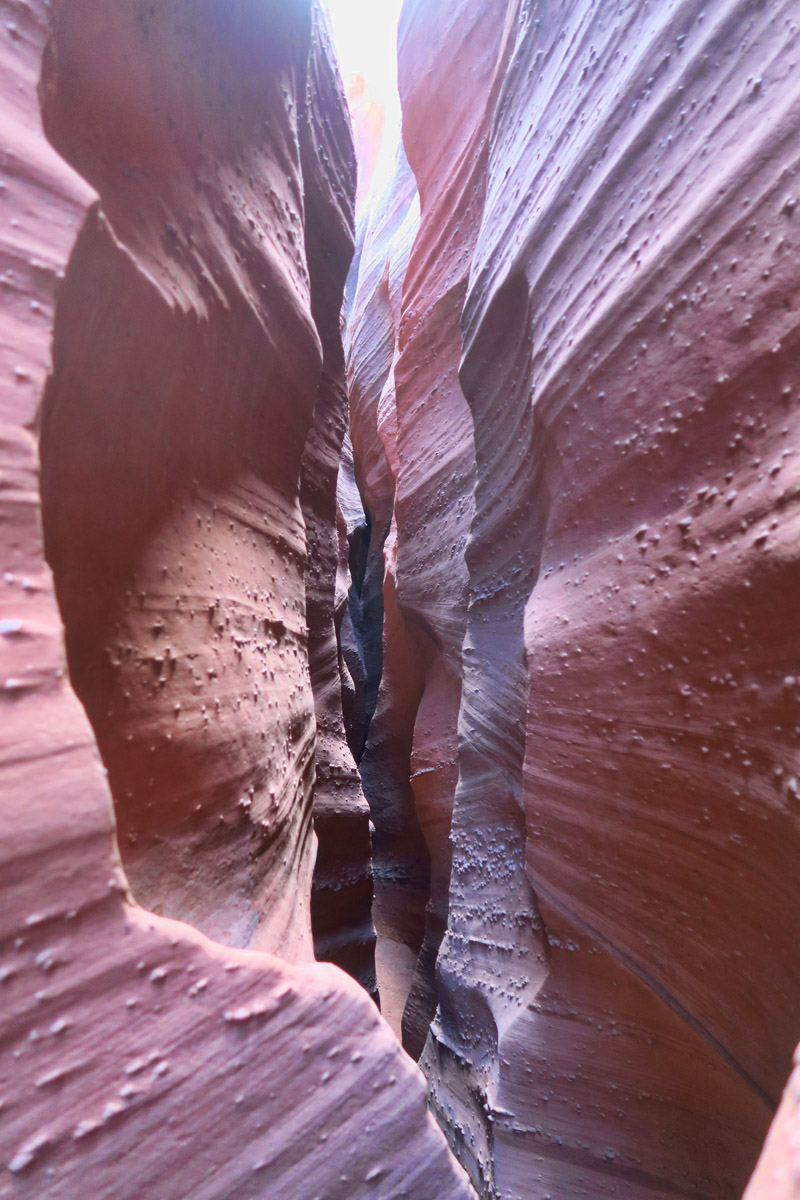 Spooky gets its name from becoming very dark in the center section.

Another nuance with Spooky is these rough knobs on the surface. Even in long sleeves and long pants, elbows and knees still get pretty scuffed up. 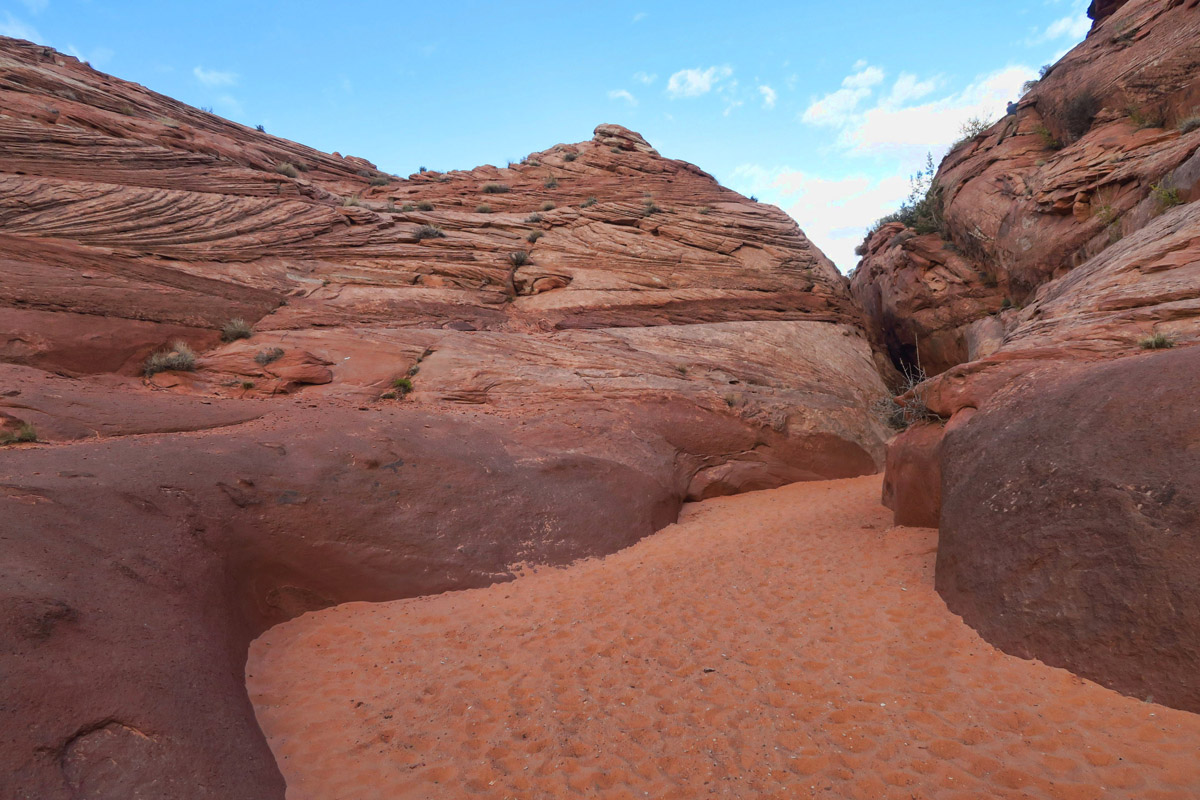 Another suggestion I read is that backpacks should be left at the opening of the canyon. I strongly disagree.  But be prepared to drag your backpack behind you in certain sections of Spooky. I took almost everything out of mine except the bare essentials of food, water, and smartphone, and still it would not fit.  But regardless, don’t leave your water behind in the desert!  During my traverse from Peek-a-Boo to Spooky, I ran into two different people coming in the opposite direction who had lost their way. The problem is not that the trails are not marked, but rather they are OVER-marked! Severe “cairn-age” exists at the top of the plateau (people who insist on stacking rocks to mark their own way) which can lead to confusion as to which cairn to follow.

(If you are not aware of the REI sponsored Hiking Project app, consider downloading it. While it will not track your hike, it will show you by way of a blue dot where you are in reference to the trail.) 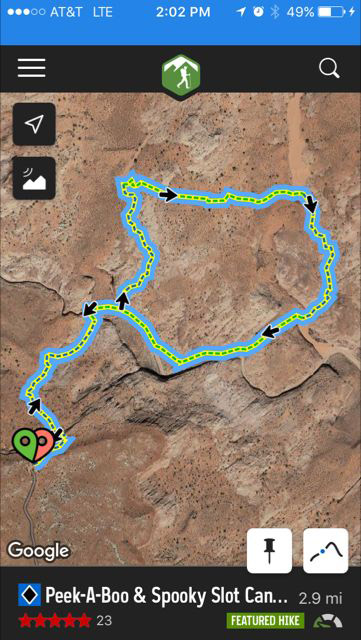 Screen shot of Peek-a-Boo and Spooky Gulch from the Hiking Project app.

Feeling a bit “scuffed up” after my day in the slot canyons, I opted for a more gentle hike to Lower Calf Creek Falls the next day. The six mile round trip hike to the 126 ft waterfall at the end is just a lovely canyon from start to end. 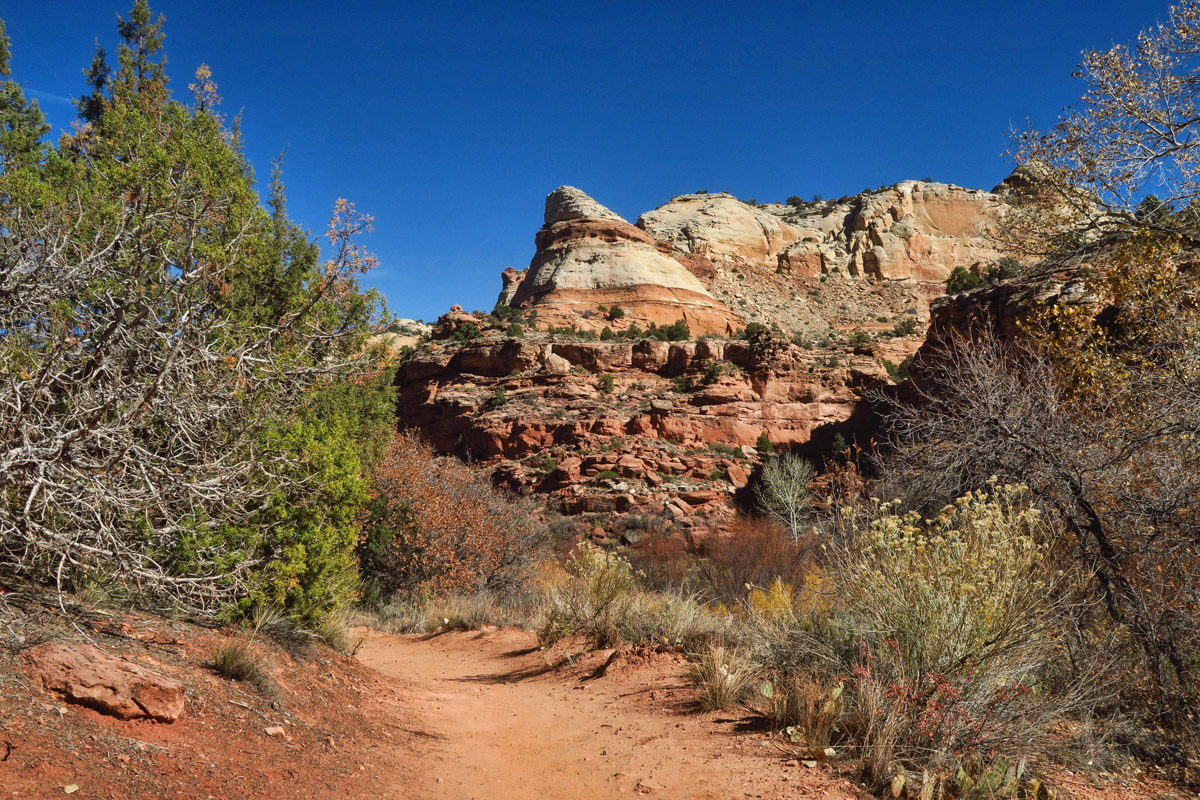 The Lower Calf Creek Recreation Area is only about 15 miles from Hole-in-the-Rock Road. 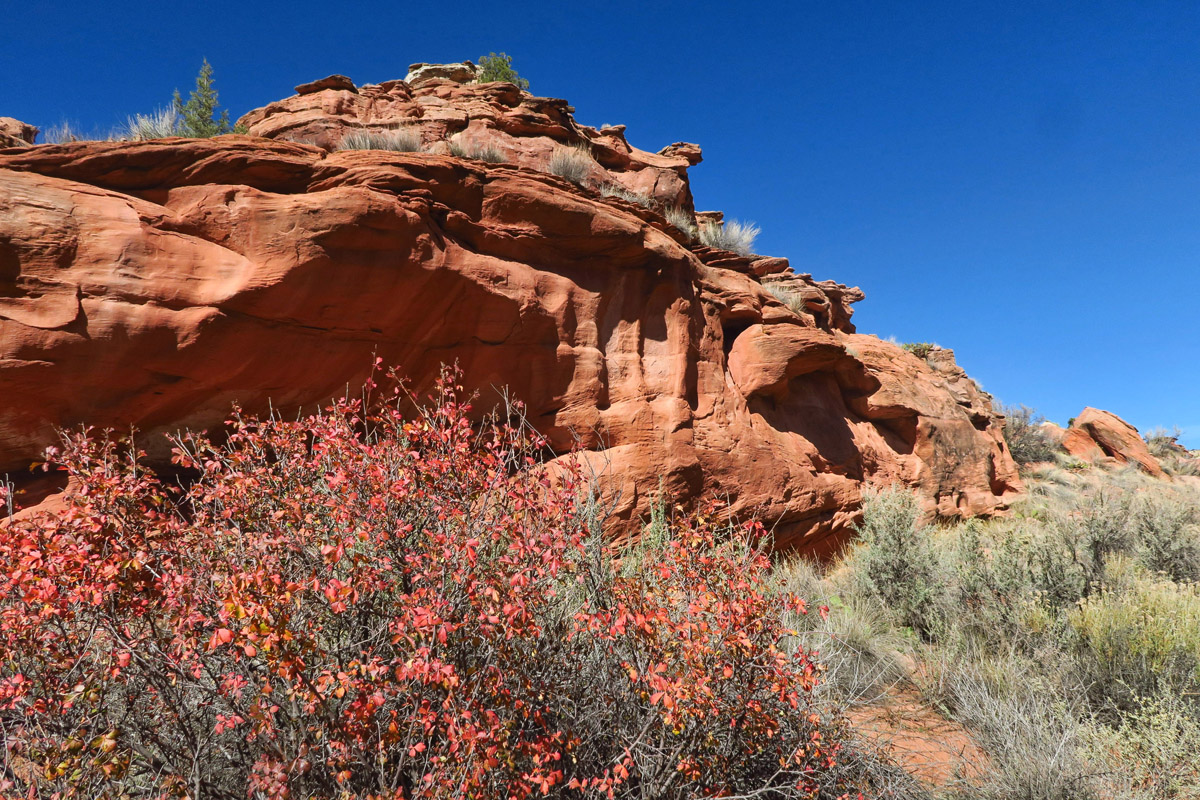 This was such a beautiful hike made more so by the perfect weather. 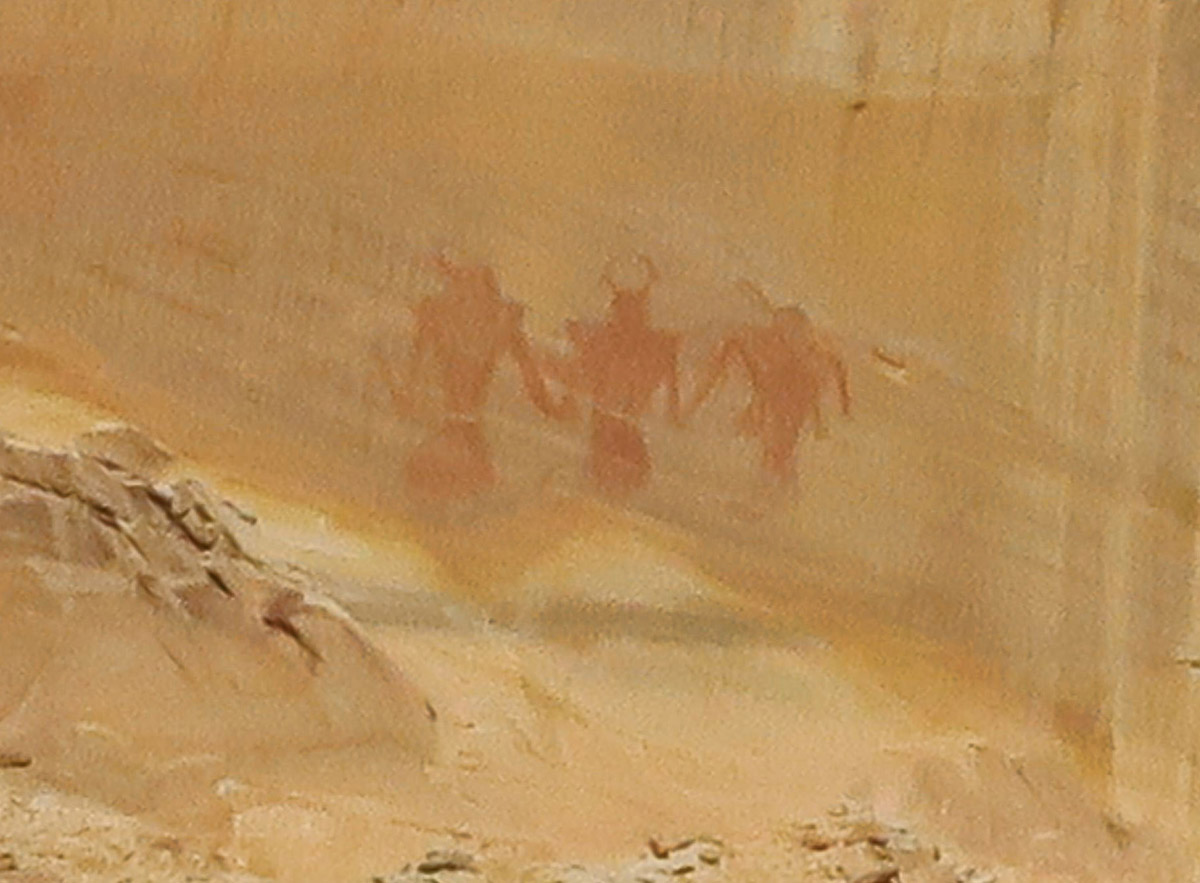 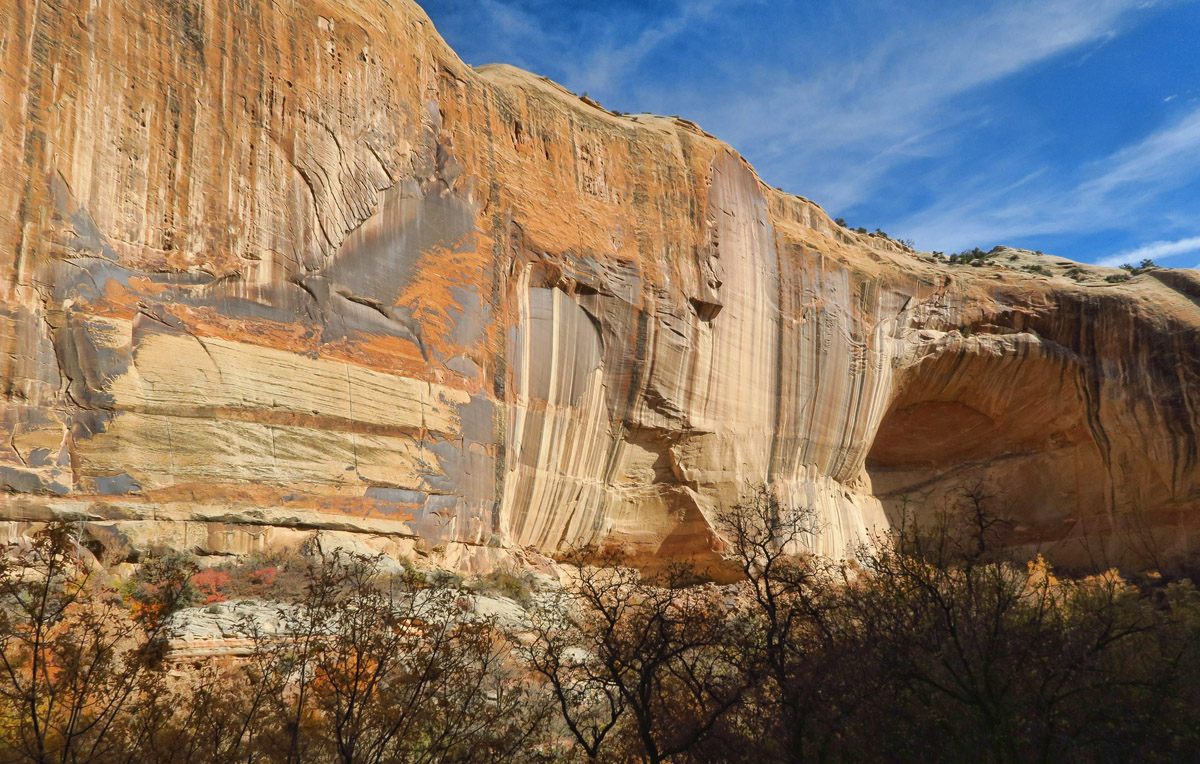 The desert varnish patterns are impressive. 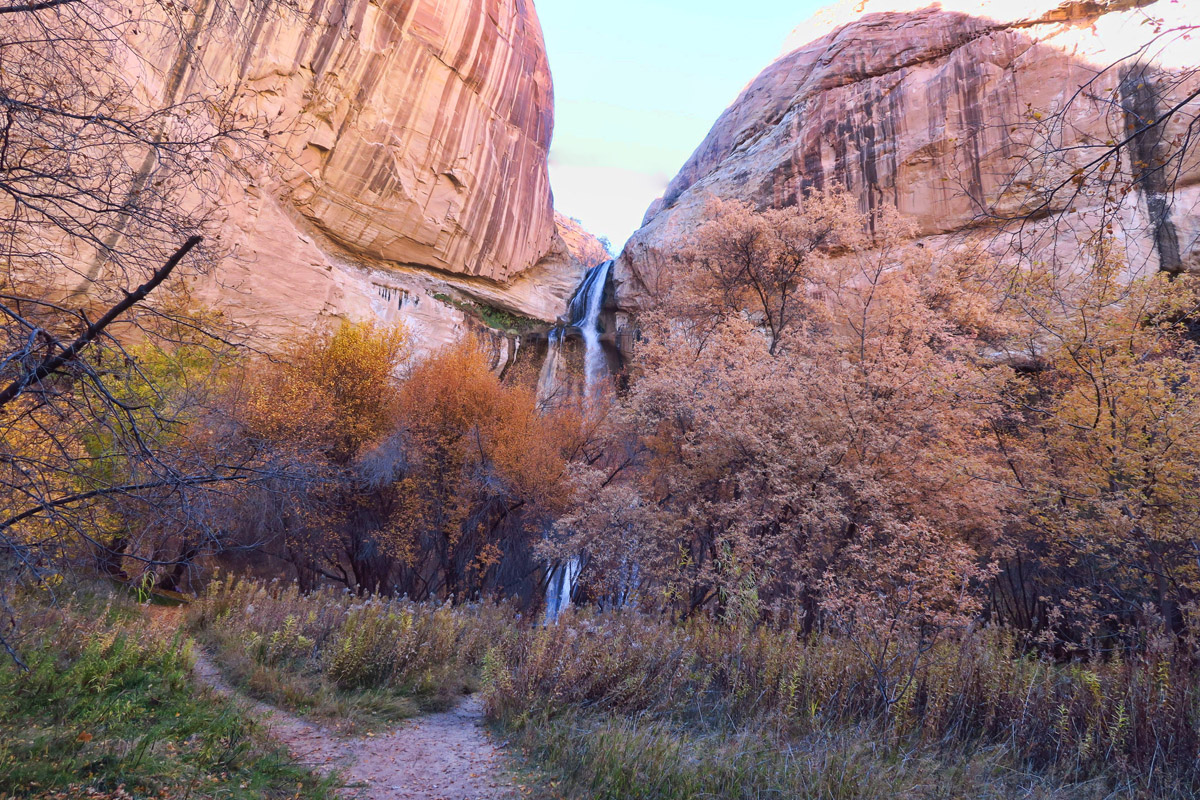 First glimpse of the 126 ft waterfall.

A lovely lunch spot. I have it all to myself for awhile. 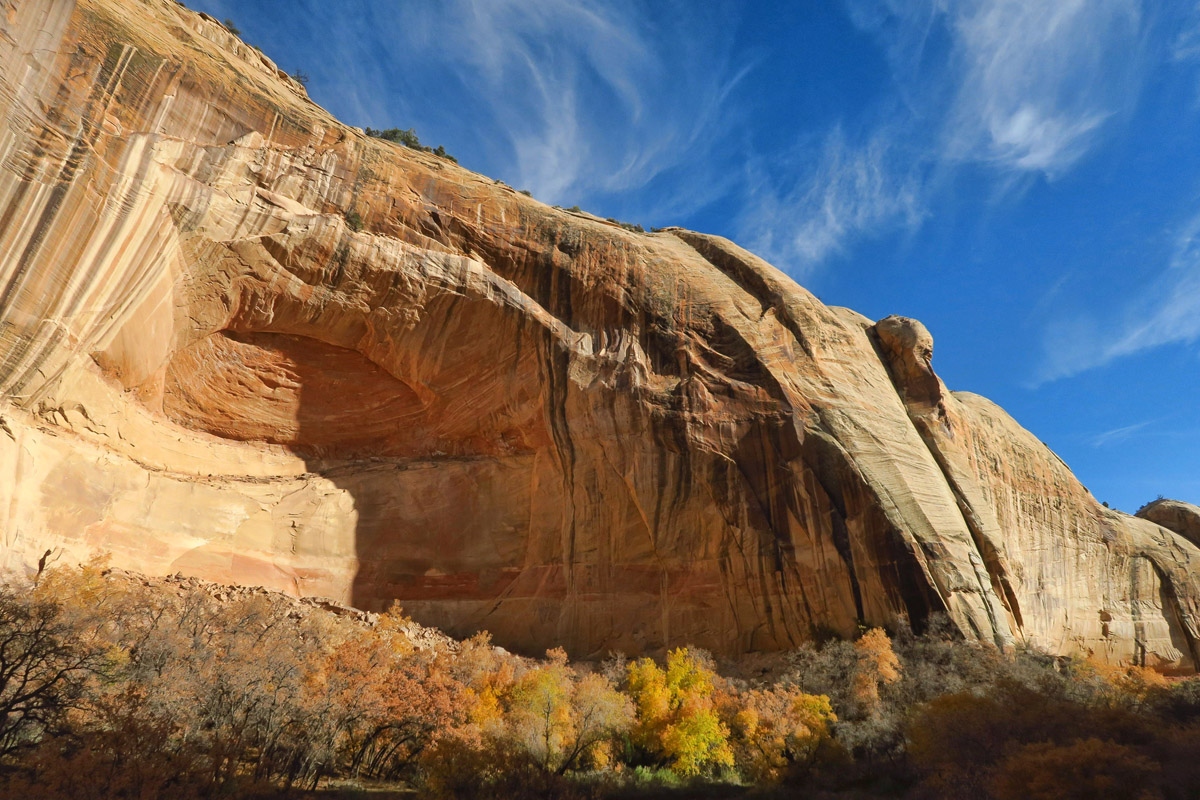 The hike back is just as picturesque as the light has changed. 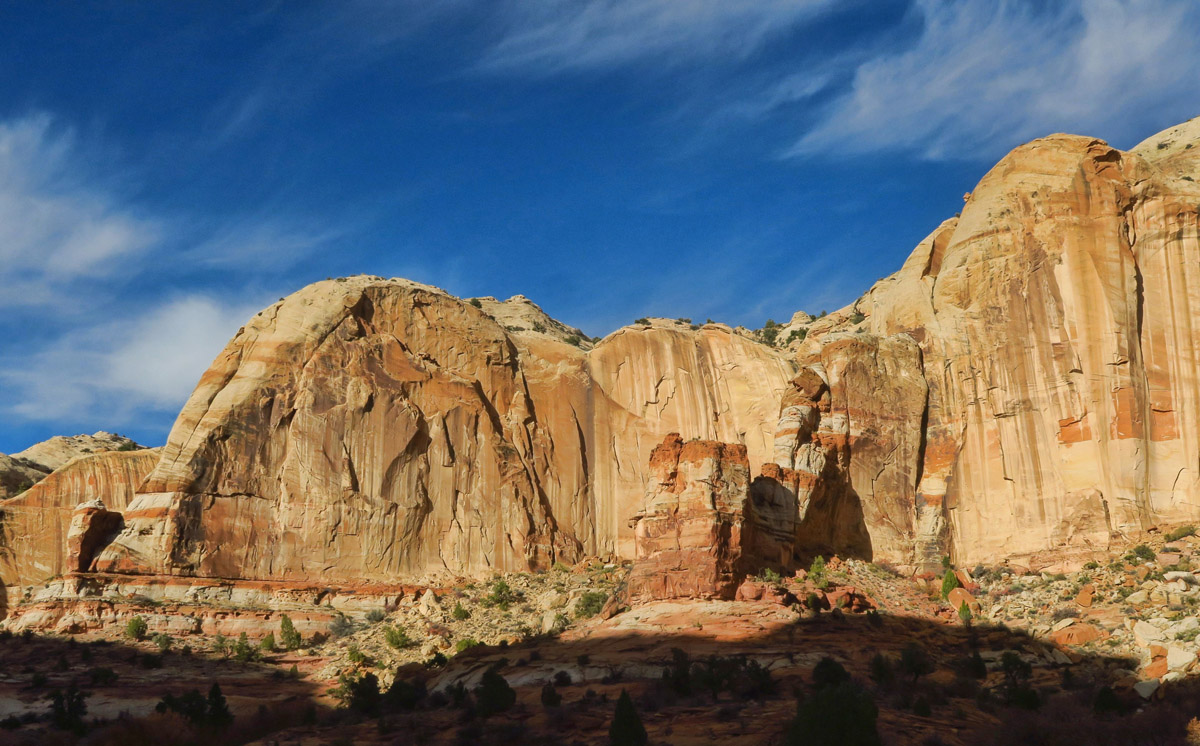 Note large “fin” in the center. 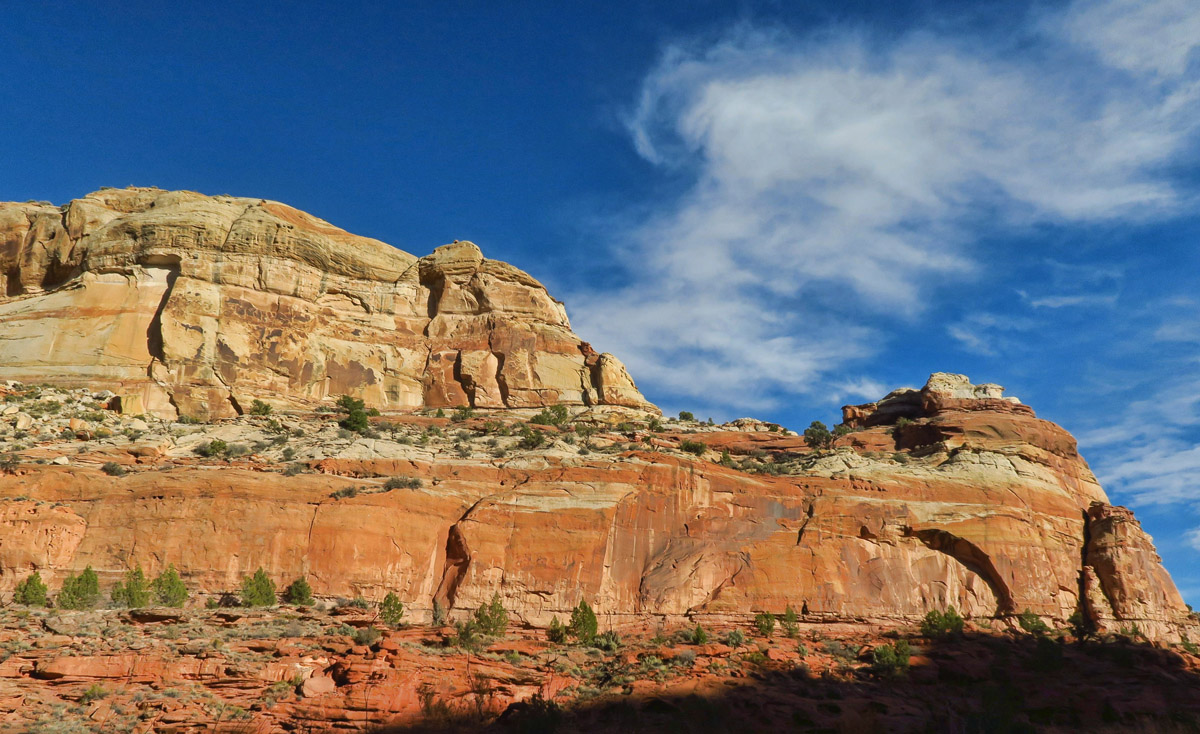 Interesting late afternoon clouds have rolled in…or is it left over contrails?

There is so much more to explore in the Escalante area, most of it along Hole-in-the-Rock Road, which is a story unto itself. It’s no mere backcountry road, but rather one built in 1879 with the blood, sweat, and tears of the early pioneers.  During the Mormon San Juan expedition, Silas S. Smith led an expedition consisting of 250 Mormons, 83 full-sized wagons, and over 1000 head of livestock in attempt to settle the San Juan River.

They reached the Colorado River only to discover access was 1,800 feet below them through Glen Canyon. So with their limited dynamite stores, they blasted an opening wide enough for the wagons at 25 to 45 % grade while hanging from the edge in barrels, then hand chiseled anchor points used to lower the wagons. While they lost 9 of their livestock, all wagons and people made it down and across the river successfully. Originally estimated to take six weeks, the expedition took six months. Just twenty miles from their original goal, they cried uncle and halted the expedition, founding the community that is now Bluff, Utah. As stated by the NPS, Hole-in-the-Rock “remains a silent monument to the faith and tenacity of those first Mormon pioneers.” 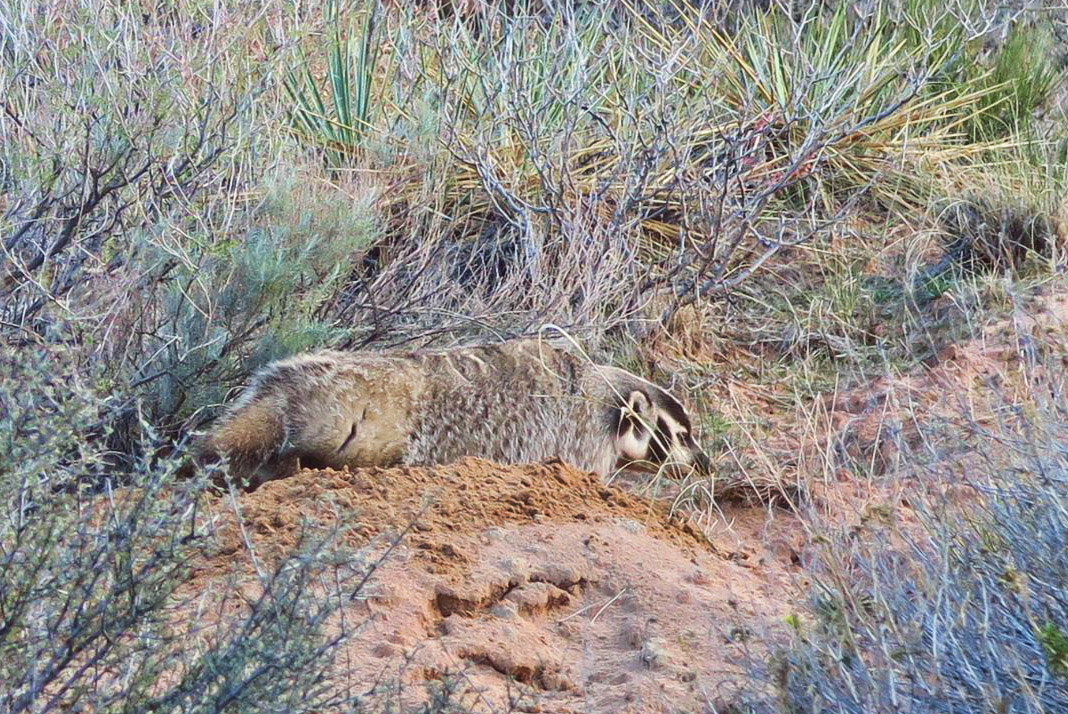 What the heck is this thing? It was HUGE! 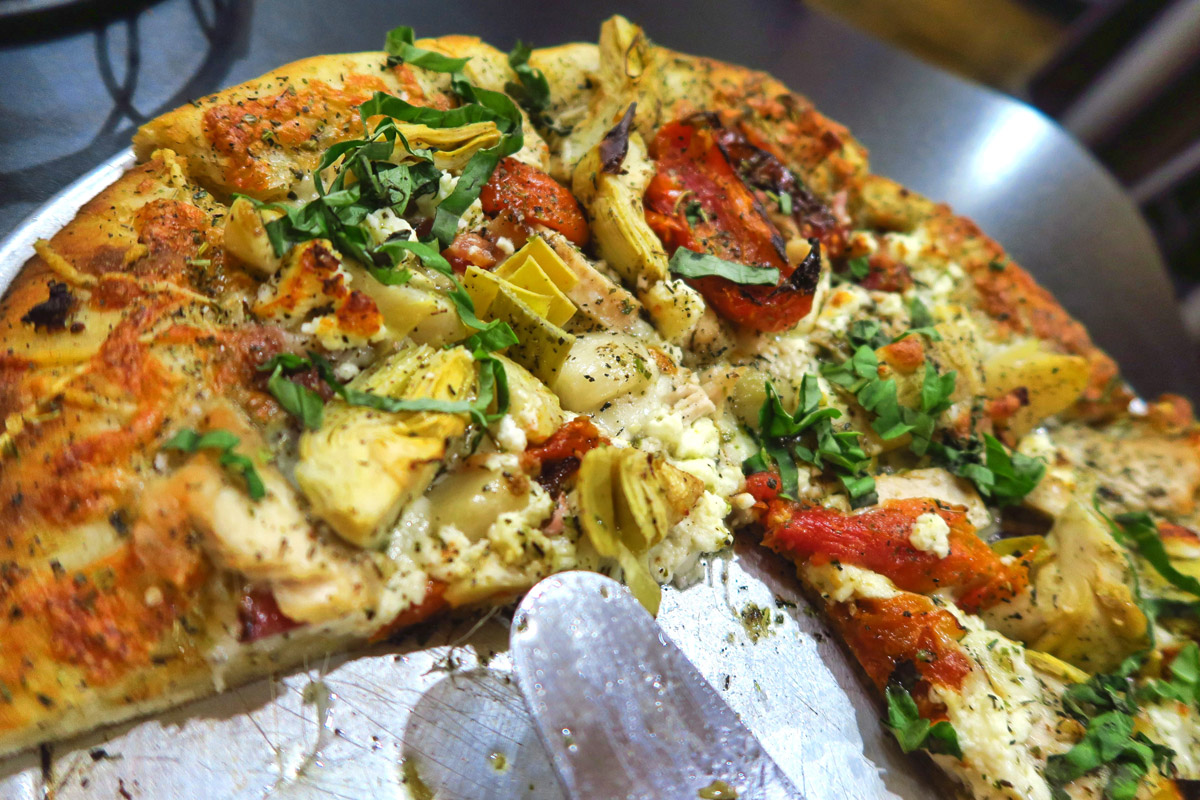 If you end up in Escalante, DON’T MISS the pizza from Escalante Outfitters!

13 thoughts on “The Canyons of Escalante”