By the time I reach Virgin, Utah from Bryce National Park, it’s late afternoon with only an hour left before nightfall. I don’t typically like to arrive so late, especially when I don’t have a “Plan B” in mind. But I am headed to my favorite boondocking spot which I have had all to myself the past three out of four Novembers (I didn’t go last year, as I was back east.) I am hopeful that it will be no different this year, particularly since I am a few days later into the month than I have been in previous years. It’s a lovely spot with fantastic views. I am hopeful that I will have it all to myself again this year.

As I drop down from the highway and crest the terrace, I get a sucker punch to the gut. A quick scan across the landscape in the shadow of the mesa, and I count eleven rigs within earshot of “My Spot.” I think I now know how the Indian scout must have felt cresting the ridge to reach his secret hideout, only to find a circle of covered wagons dead center. My secret hideout which I have had all to myself for three Novembers is “secret” no more. 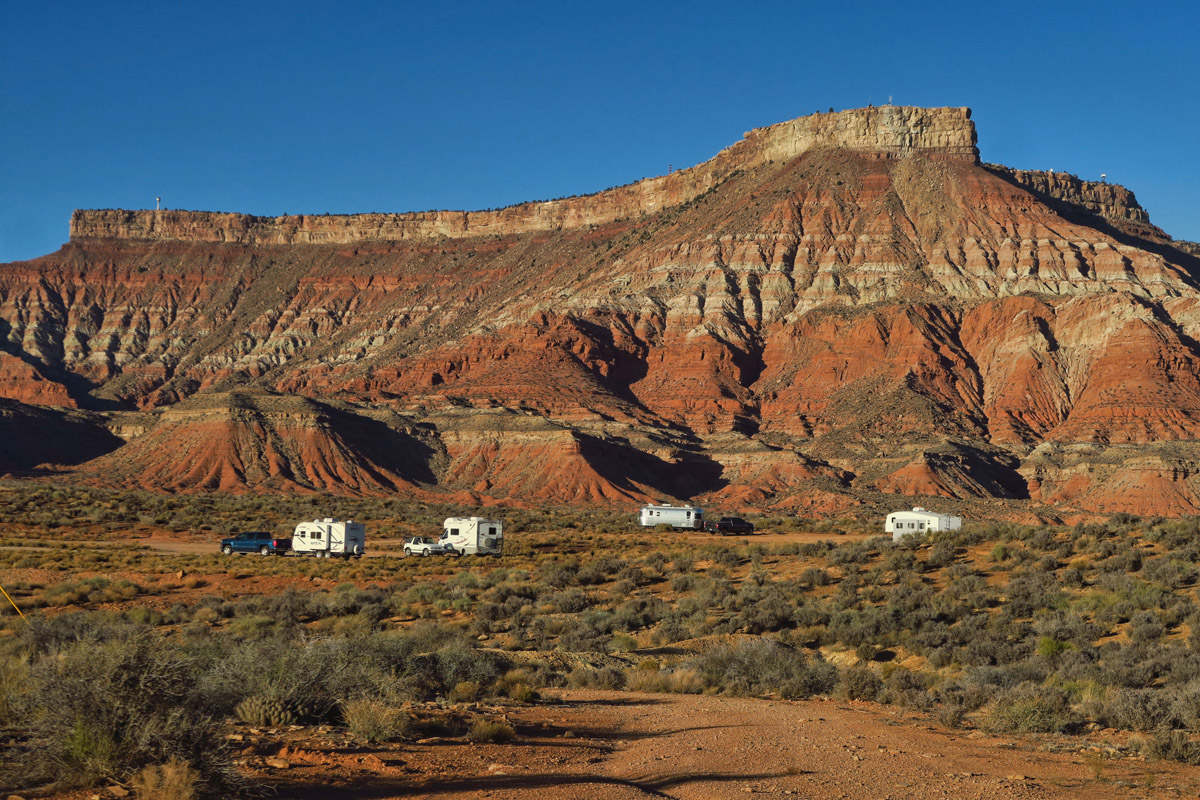 My private spot is private no more. 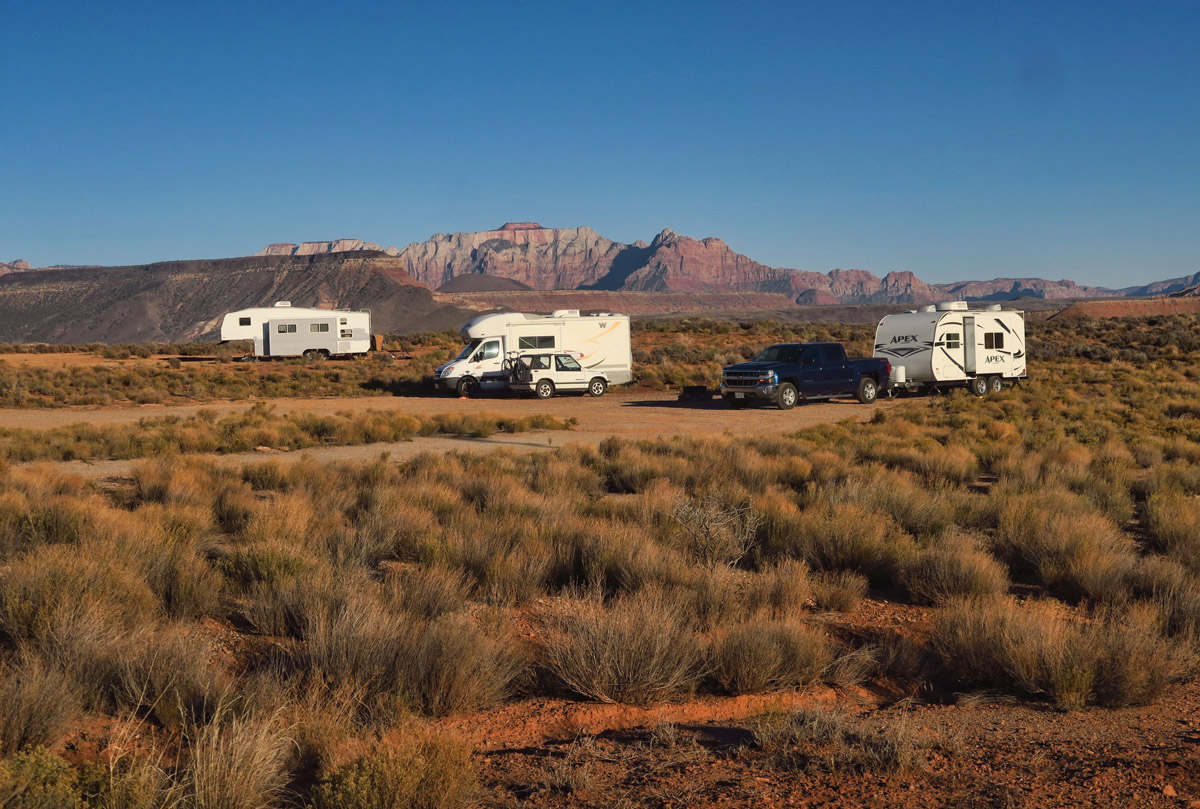 I had this circle all to myself three Novembers in a row. I don’t like buying into the old adage “All good things must come to an end,” but…..

When I was first introduced to this beautiful boondocking spot by a group of friends back in 2014, Campendium, the leading site for campsite information and reviews, wasn’t even launched yet. Now, there are over 50 reviews posted for this area. The times, they are a changin’. And they are a changin’ FAST!

Fortunately for me, “Miss No Plan B,” there is a young man outside his rig when I pull in, the sun sinking low in the sky. There is no place to comfortably park in the “circle” where I have always parked without crowding the others.  I feel like weeping. But the young man comes over to greet me, and asks if I am looking to park. He tells me he and his full-timing family are leaving at 8:00am tomorrow morning, and if I don’t mind his two noisy young kids for a night, I am welcome to park alongside, backing into his space when he leaves. I am extremely grateful, as the Walmart back in Hurricane, UT is my only other option.

My favorite walk from the boondock spot along the canyon rim overlooking the Virgin River reveals lots of other changes as well. First I see signs that the roads are now closed to vehicular traffic, but still allow hikers and bikers. The further I go, the more restrictive the signs.  The “vehicular traffic” is replaced with signs saying the paths are closed. Period. As I experienced in Sedona, it appears the initiative is to now “corral” boondockers into designated areas. As I walk along these paths, I find evidence of human waste and toilet paper piles, broken glass bottles, and even a sectional sofa. Is it any wonder? 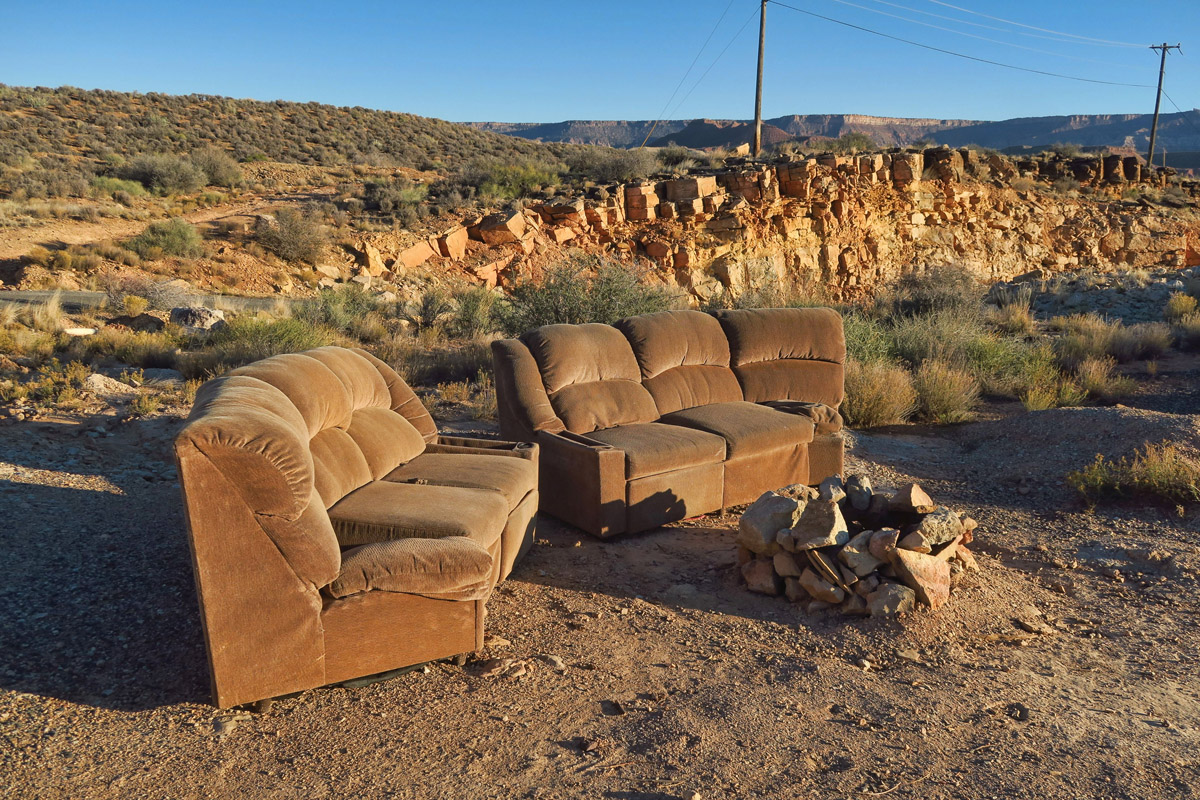 People using BLM lands as their own personal “dump” is contributing to the loss of boondocking. 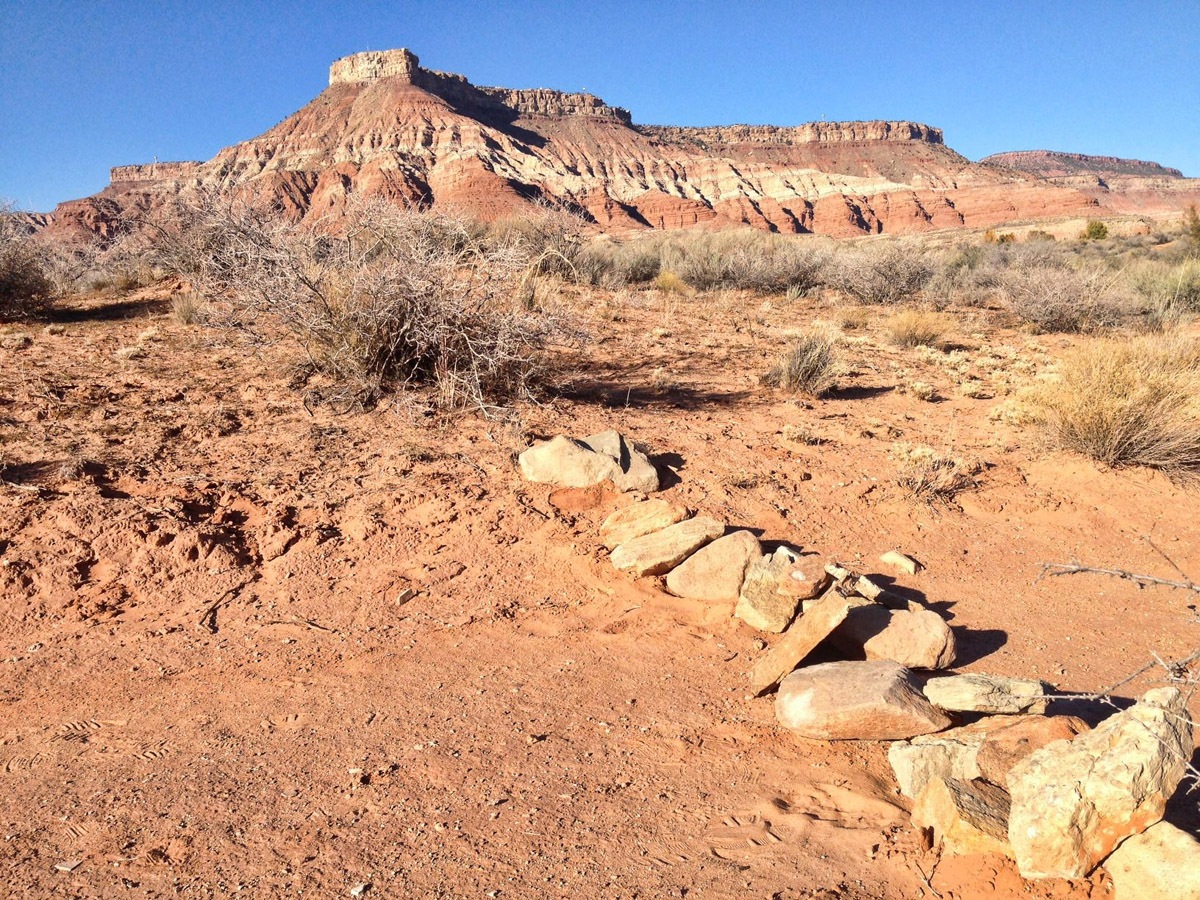 Roads that used to “spider” off to afford more privacy are now blocked off. 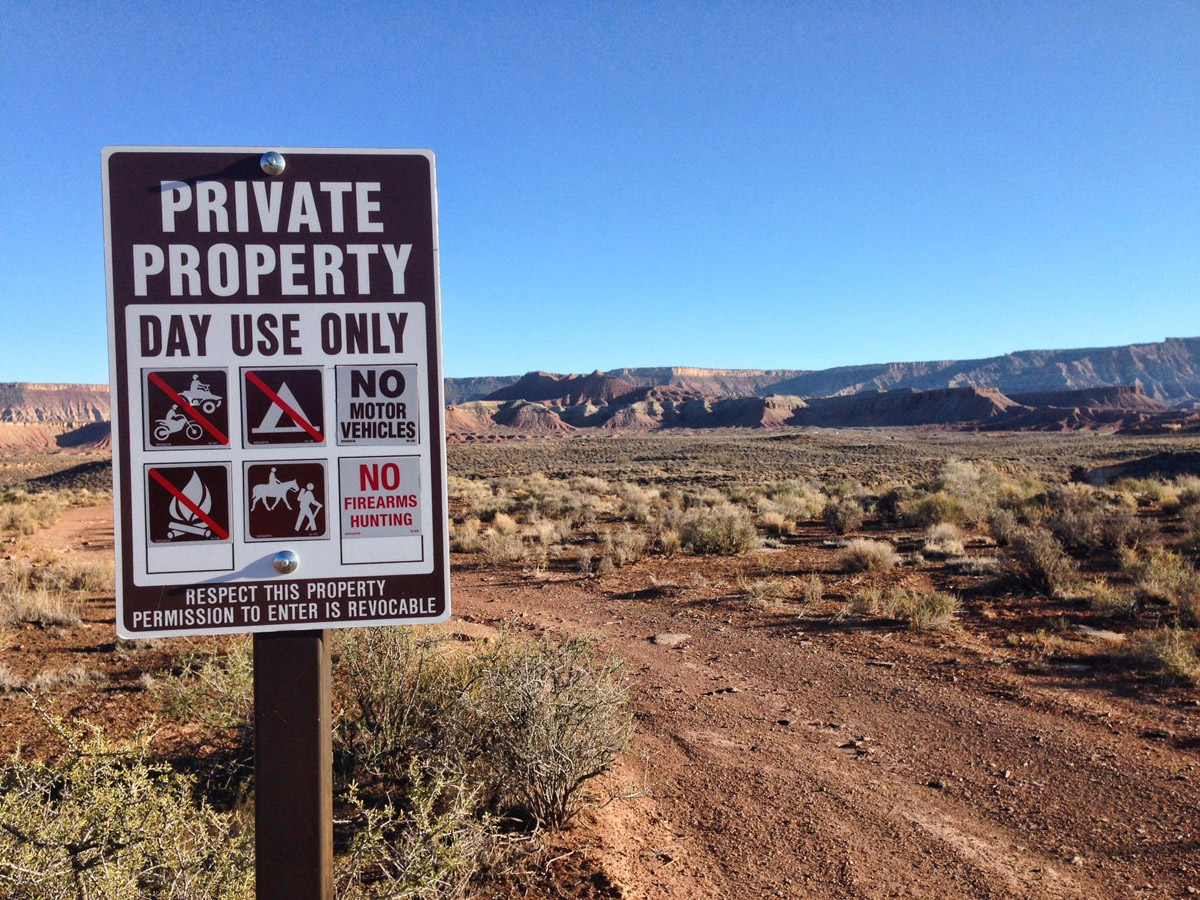 First they blocked the campers… 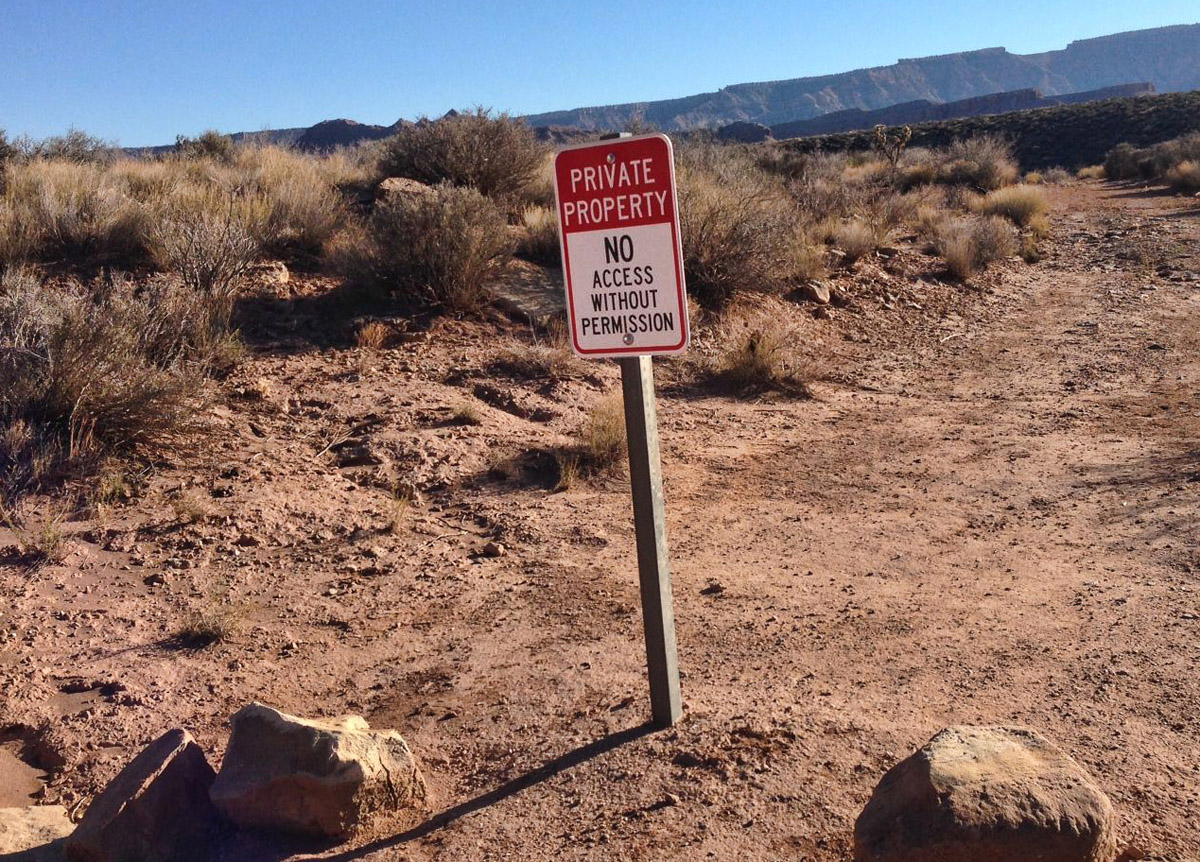 And then they blocked everyone…unless of course, you have “permission.”

But it’s not just the boondocking area that’s changed. I arrive at the Zion Visitor Center at 11:00am on a Wednesday morning in November to be greeted by signs stating, “Parking Lot Full. Park in Town.” This is supposed to be the off season! Midweek! But I circle the parking lot for 20 minutes. It’s like a feeding frenzy with not even a single parking space to be had or a signs that anyone plans to vacate.

In the past, this would have been no problem. I never minded parking in the giant lot right outside the park gate and walking in to catch the shuttle. But now, all of Springdale has enforced a new metered parking system that charges $1 for the first hour, $3.50 for the second hour and $22 for the day. There is no more “Free Parking” to be had in the town of Springdale. Thank goodness, I don’t have to pay to enter the park, thanks to my Geezer Pass. But can you imagine having to pay $35 to enter the park, only to be told you must also pay an additional $22 to park outside the gate?? Springdale’s greed has put undue pressure on the park, as now people are parking on curbs, in ditches, and in between boulders to avoid having to pay. And drivers are extremely aggressive in jockeying for an empty space. 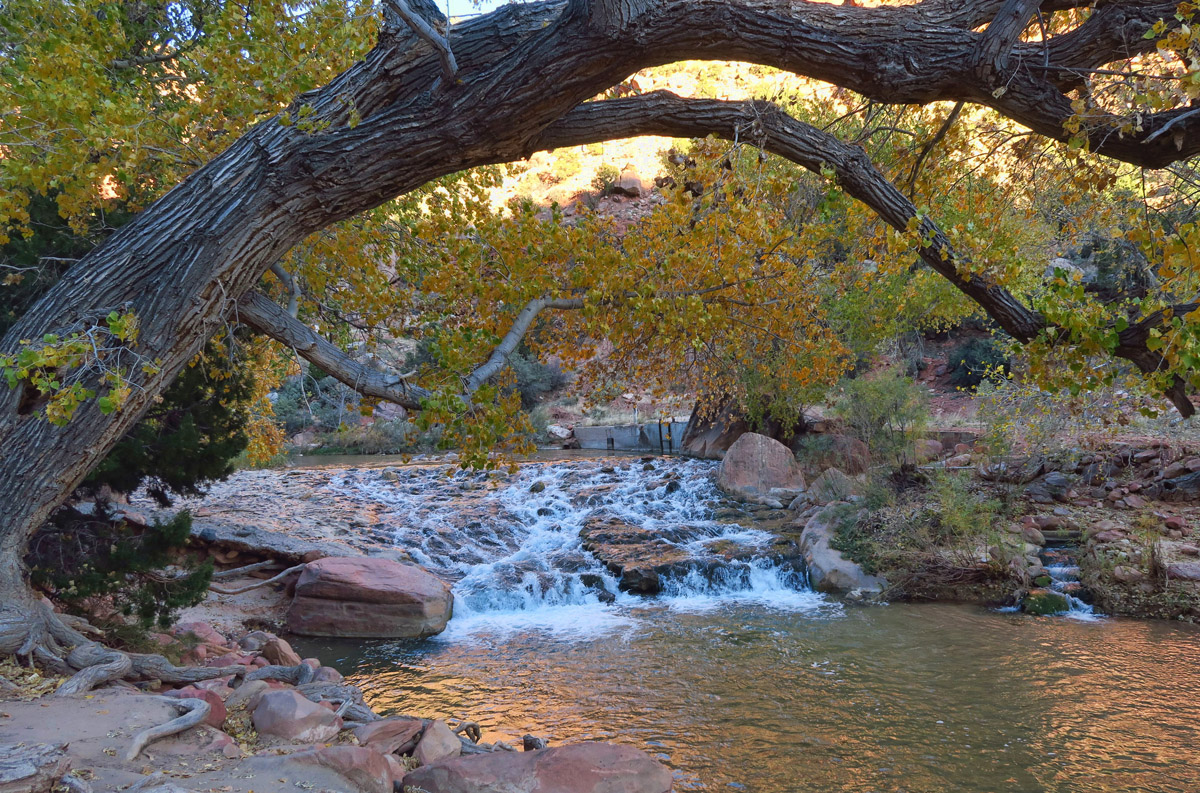 The Virgin River runs through the heart of Zion. 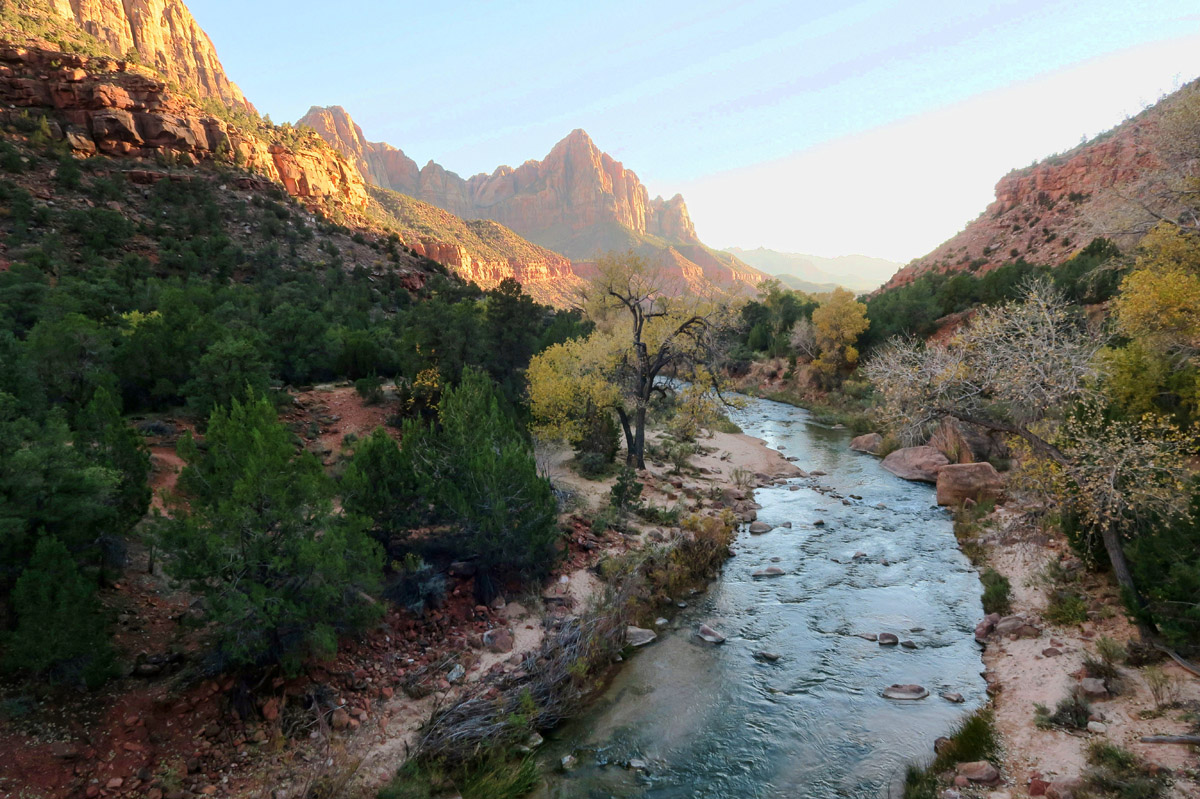 There’s an unusual haze in the air during my visit. I don’t think it’s smoke. The only thing I can figure is construction dust, since roads leading in are all under construction. 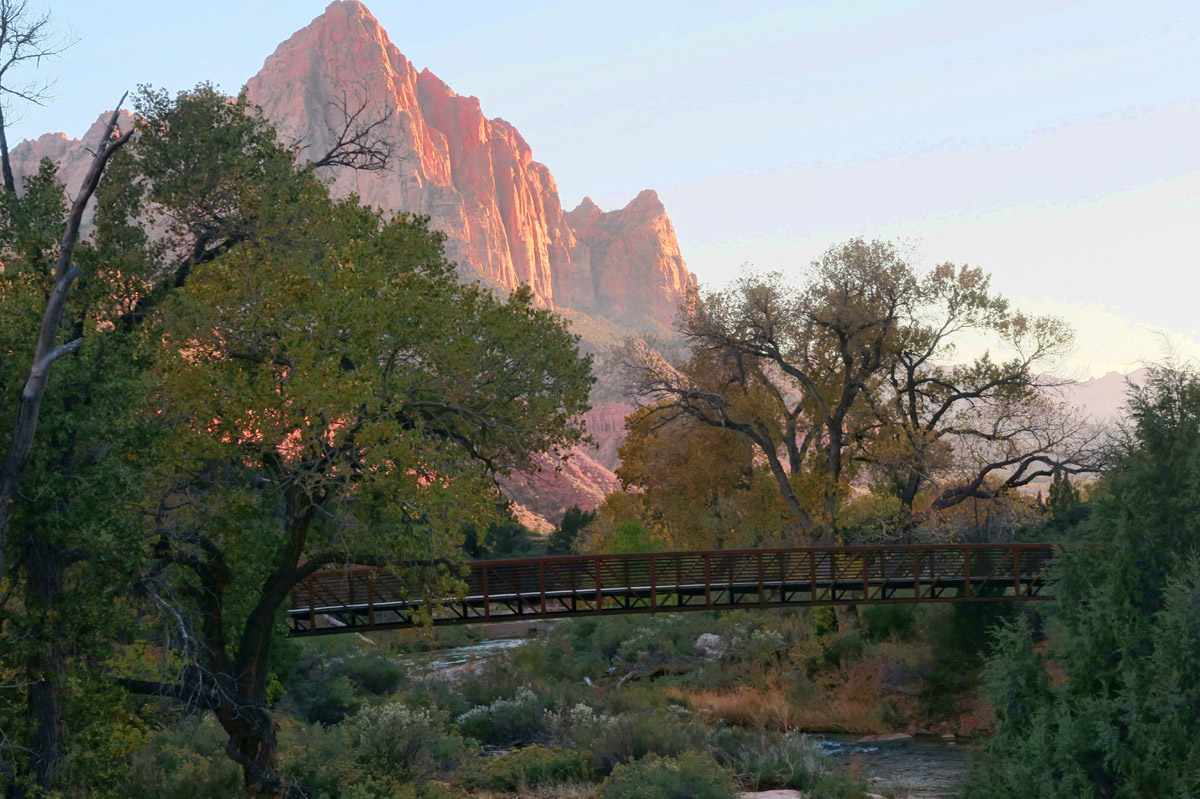 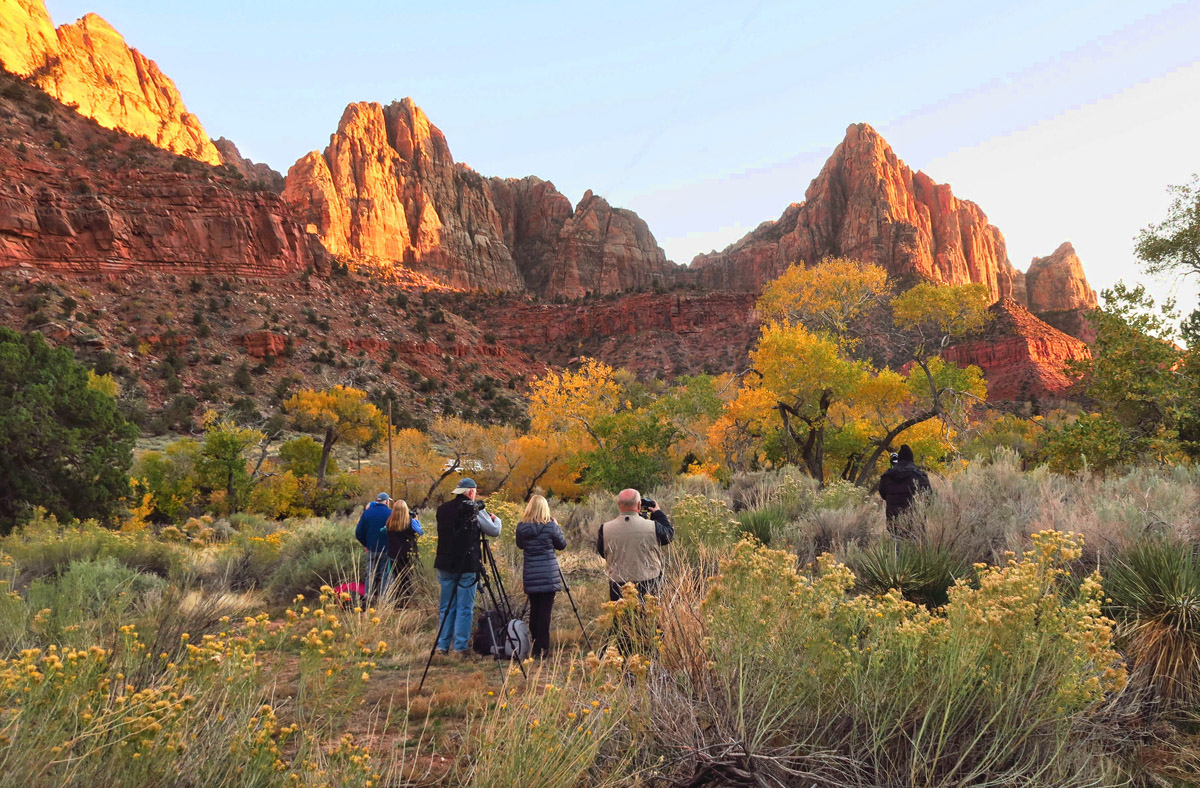 In my opinion, not only the parking, but the entire vibe of Zion has drastically changed. Only as recently as 2015, the shuttle was only necessary on November weekends. Now, three short years later, “Parking Lot Full” signs greet the visitor at every turn on a November Wednesday morning. Thanks, Utah Office of Tourism for those much needed “Mighty Five National Parks” and “Grand Circle Tour” ad campaigns!

My visit to the once beloved Zion this past November has made me face the question, “Am I done?” And if I’m done, then what’s next? How much longer will I have the patience to tolerate the growing RV population that seems to be inversely proportional to limited campground availability or shrinking public lands?  Or those who seem intent on abusing them? As more and more people “hit the road,” it becomes increasingly frustrating and harder to find quiet places to commune with nature. Lately, I see more of my neighbors than I did in my “sticks and bricks.” Is the answer a more rugged rig with higher ground clearance?  Can I be content to find exploration and adventure away from places with an ad campaign? 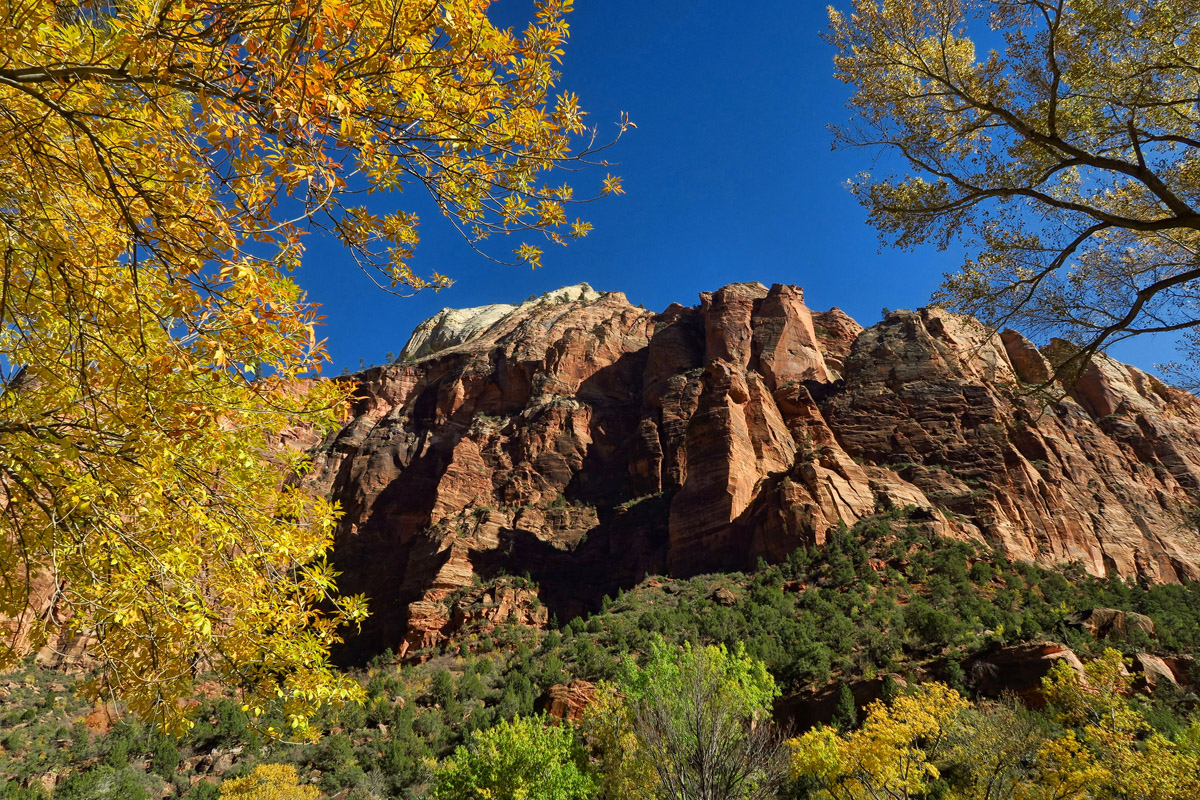 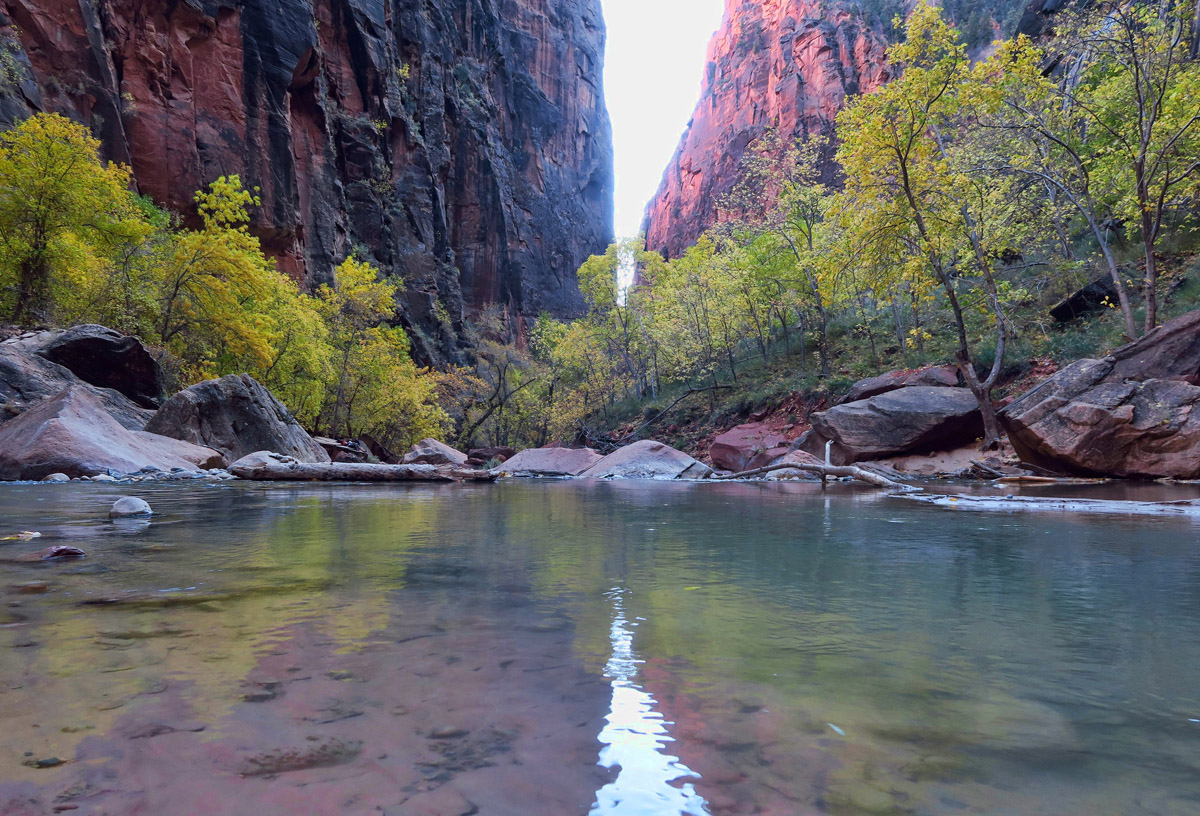 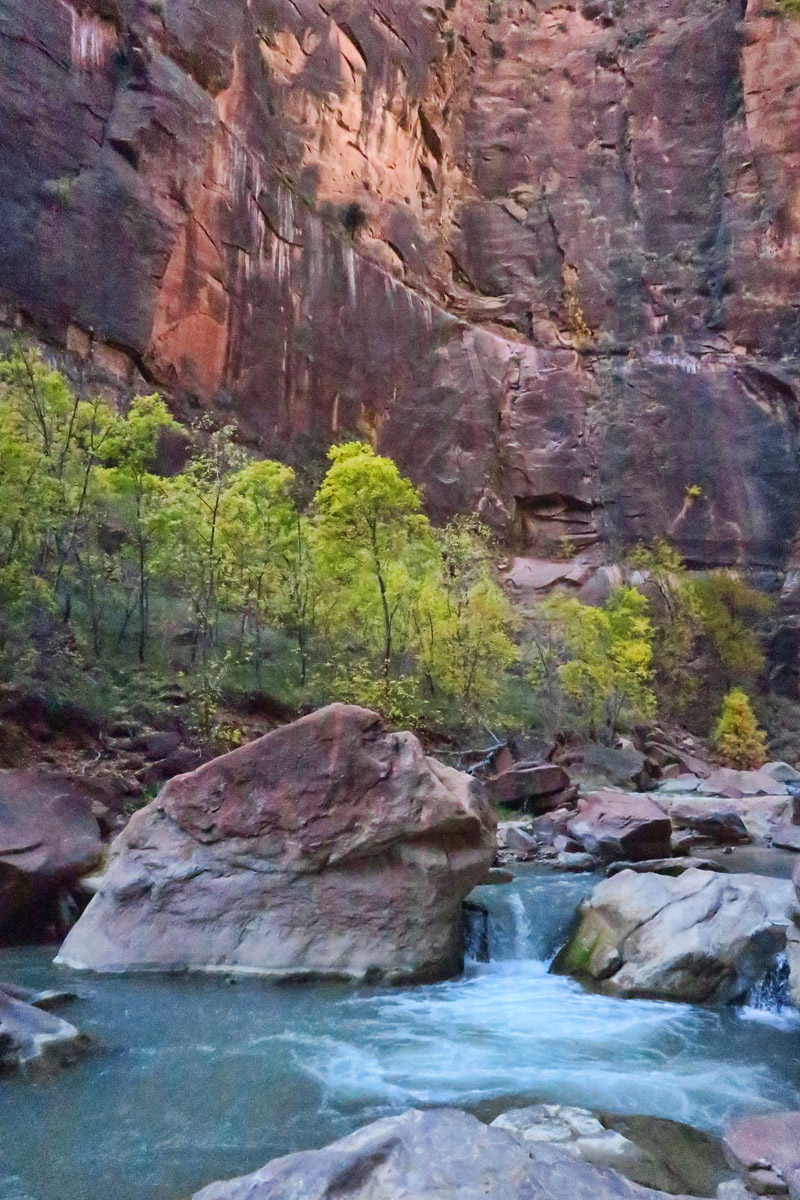 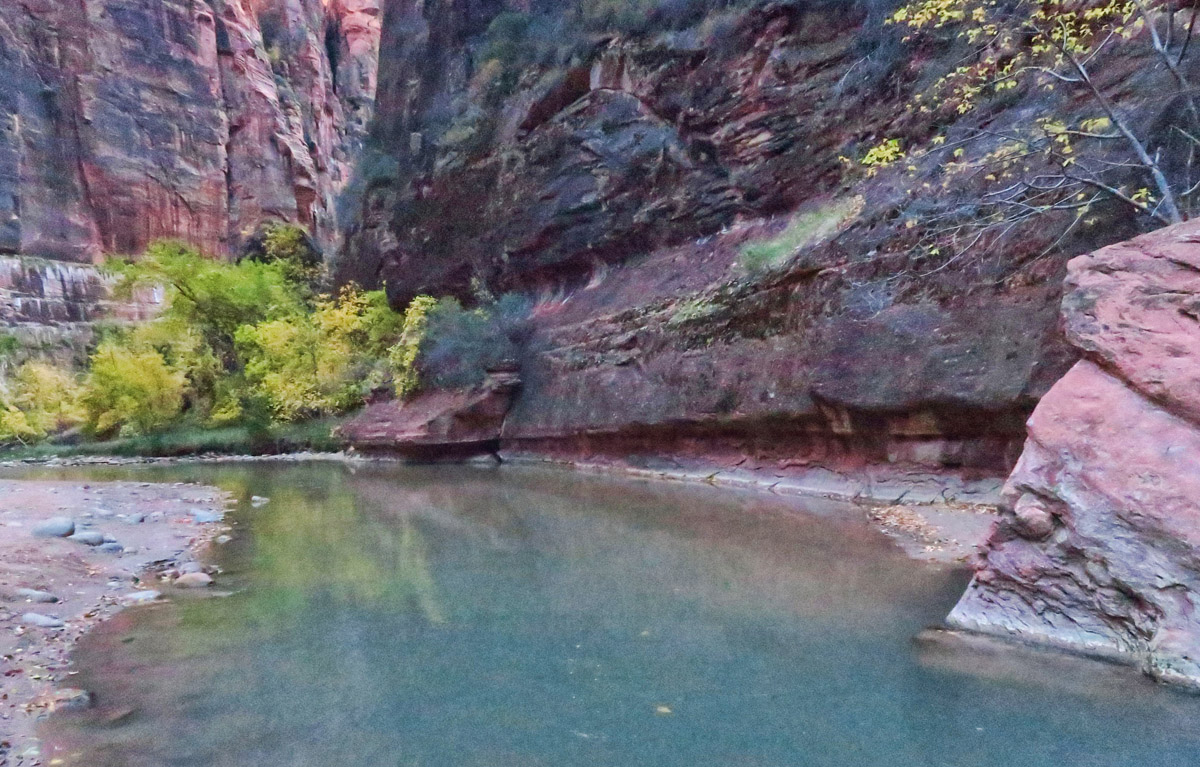 I feel bad for those bright and shiny new nomads who post on the Facebook Fulltimers group, “We did it! We sold everything! Tomorrow is the first day of our new lives as full timers! We are taking our four kids, three dogs, two cats, and a partridge in a pear tree on the road!” Sadly, they won’t find the same ease and freedom I found just six short years ago. I feel a shift…. It is starting to feel more like a “push” to find a parking place rather than the “pull” of adventure. That’s big. 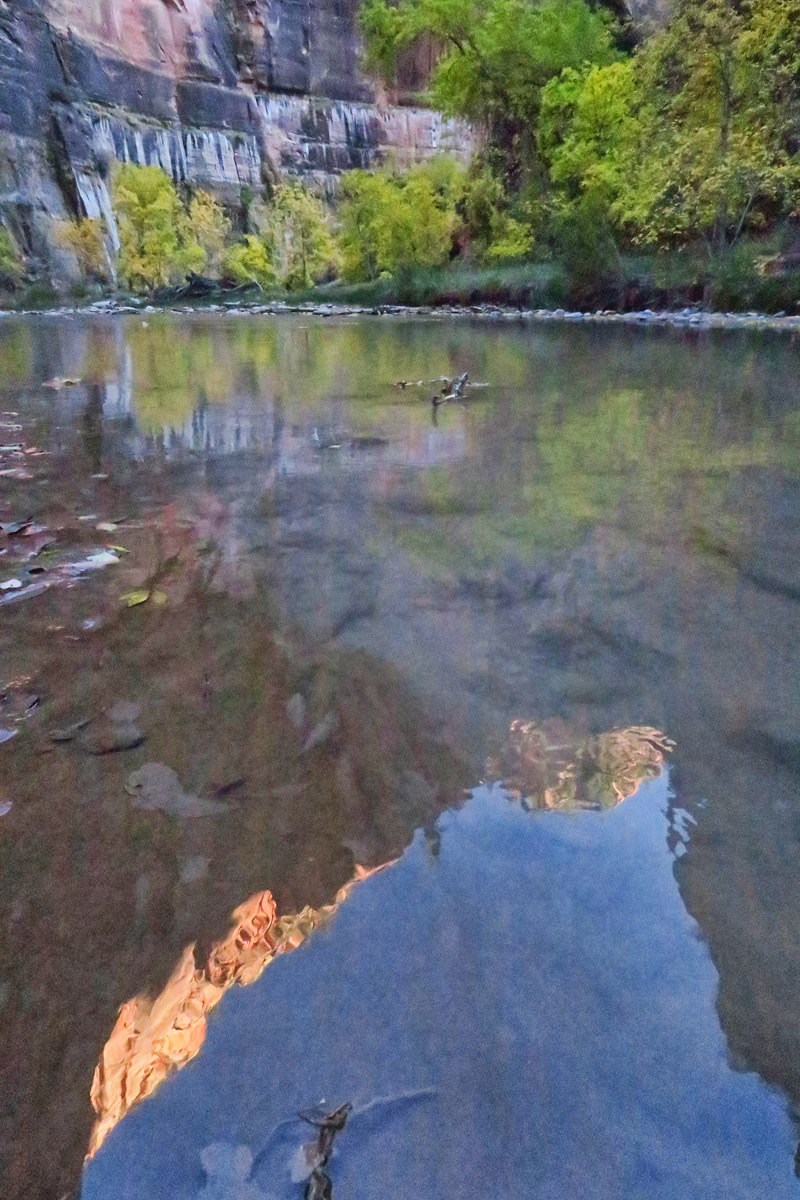 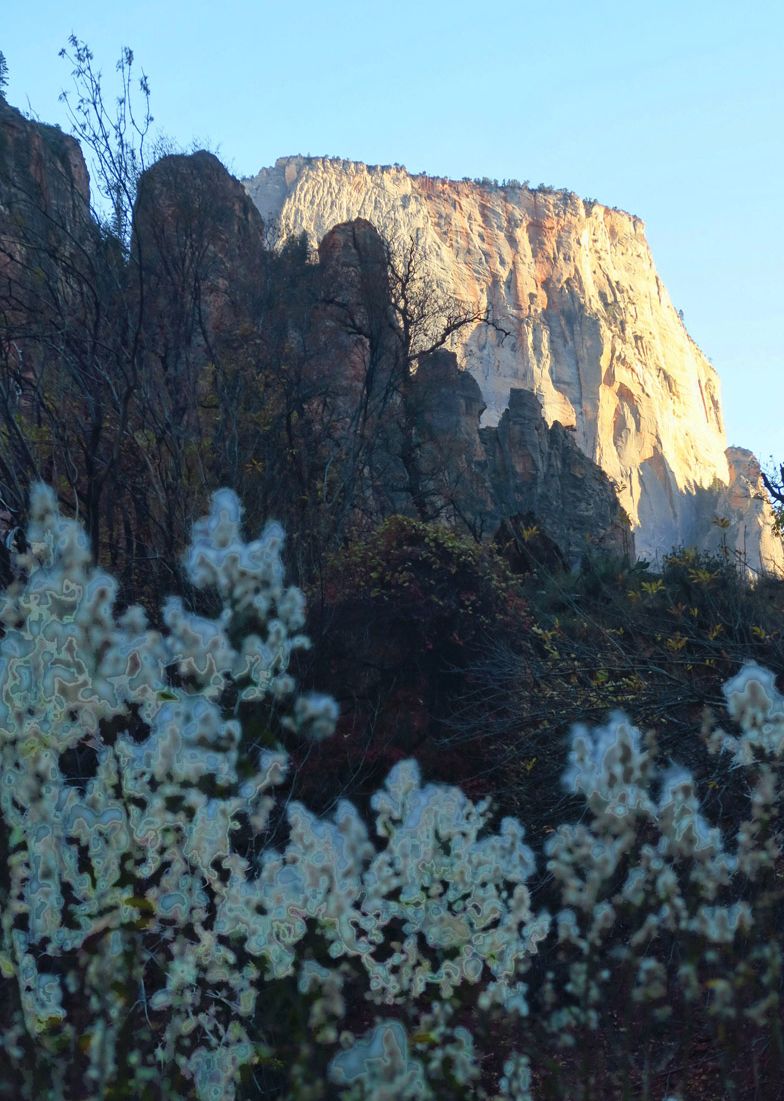 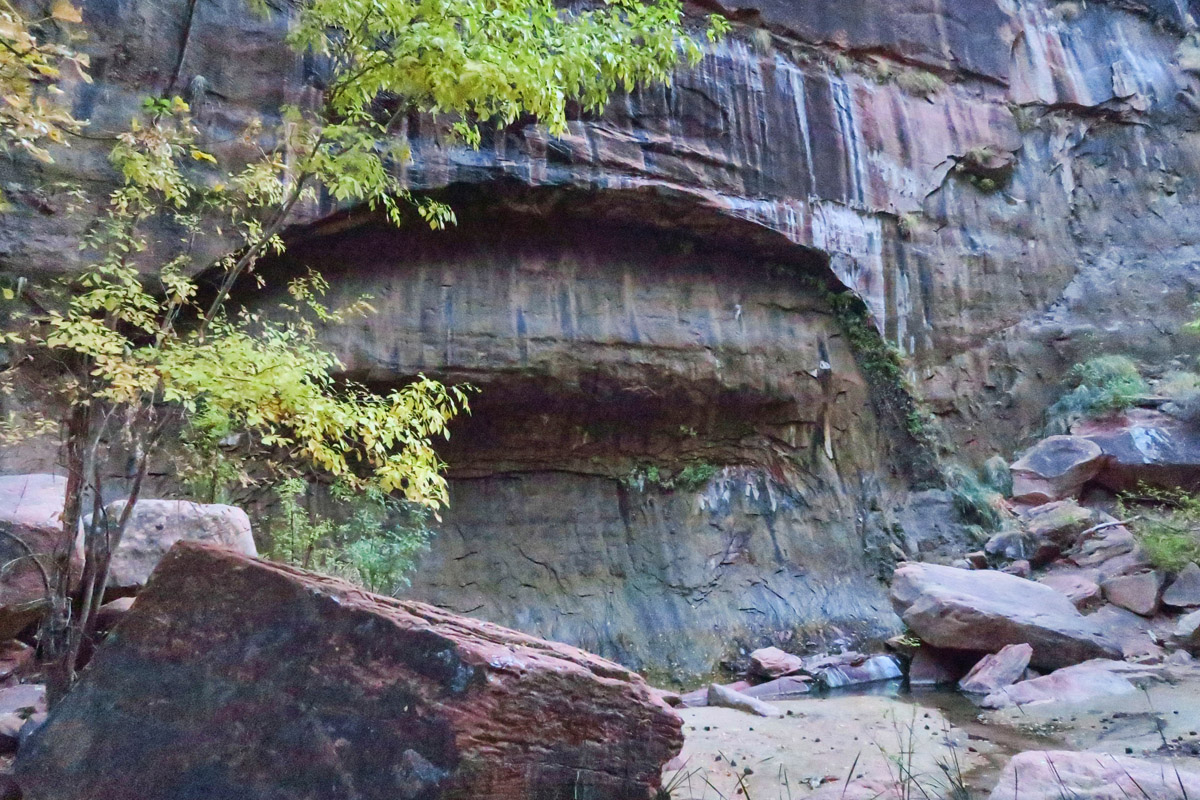 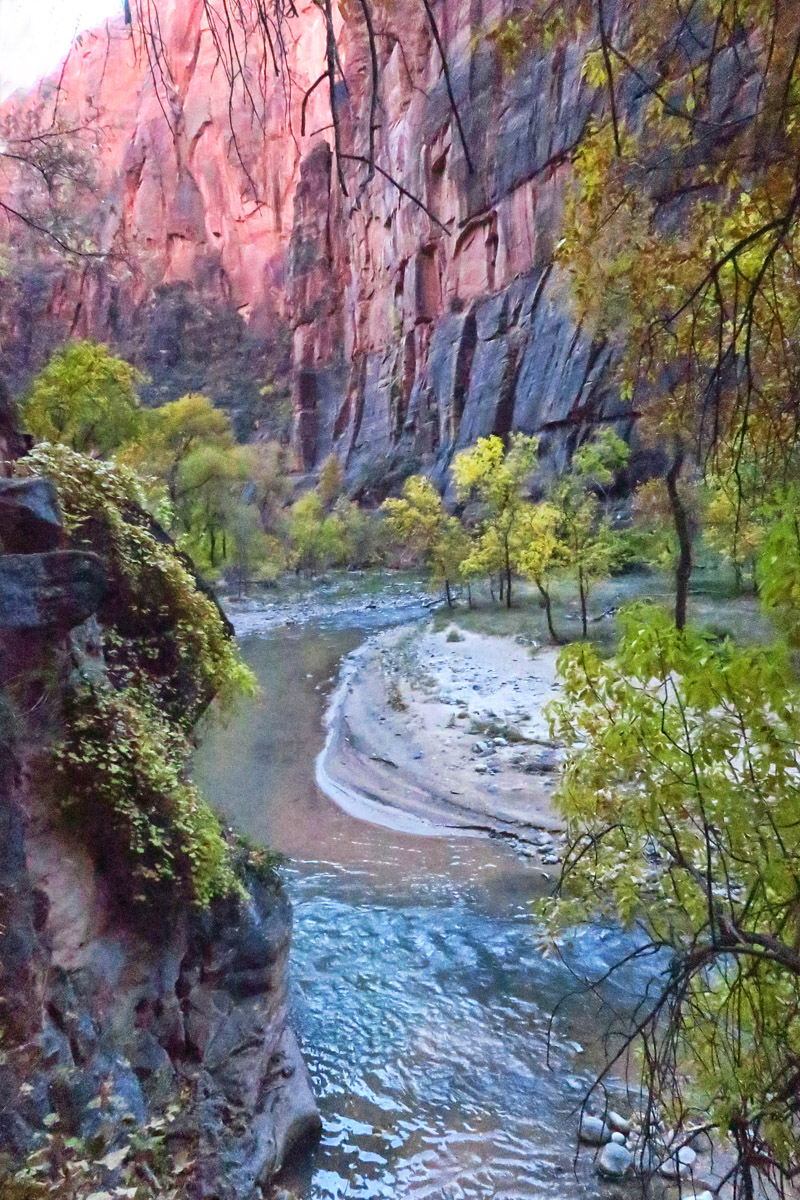 The off season is a good time to take stock of the past year and figure out which direction I’d like to explore in the coming year.  Coming off the road for a period gives me a break in the day to day routines of migration, navigation, maintenance, etc.and gives me time to think.  Stepping out of the Winnie for a period helps me look at my lifestyle from a broader perspective and frees me up for a more creative approach to how I want to spend the remaining years of my life. 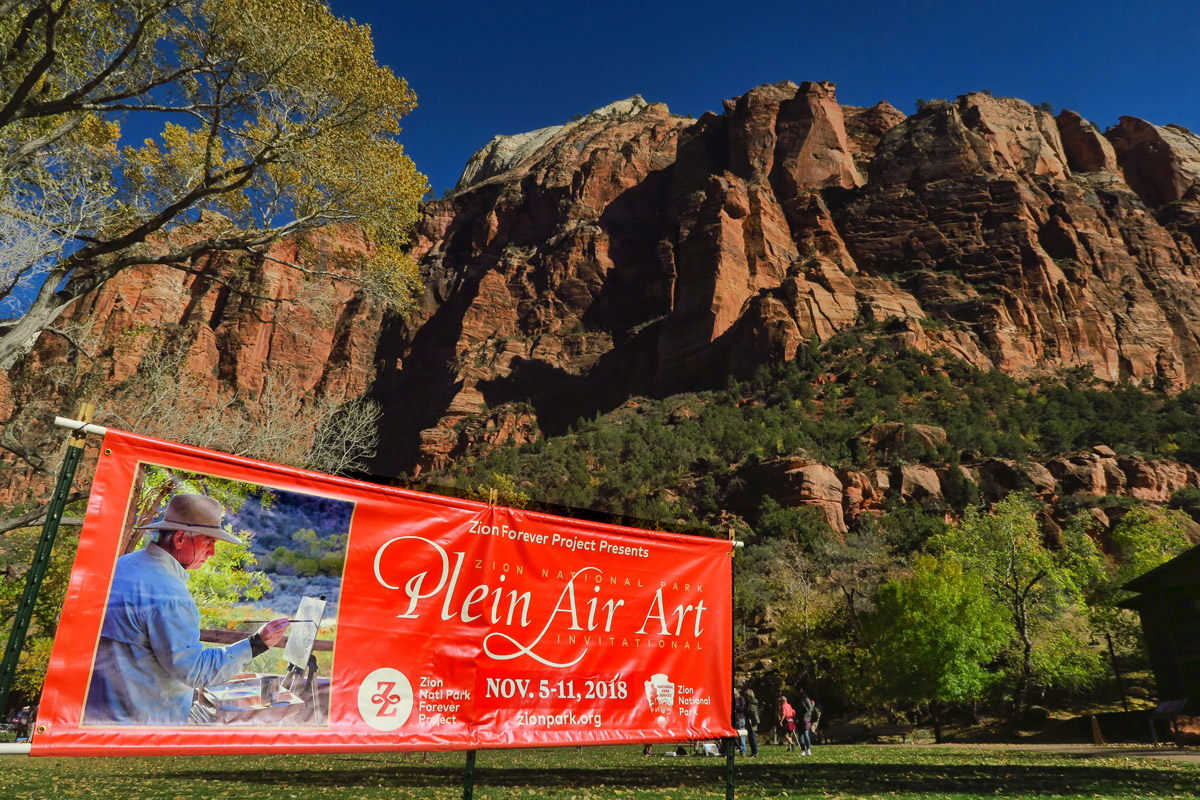 The Zion Plein Air Invitational is my favorite fall event. 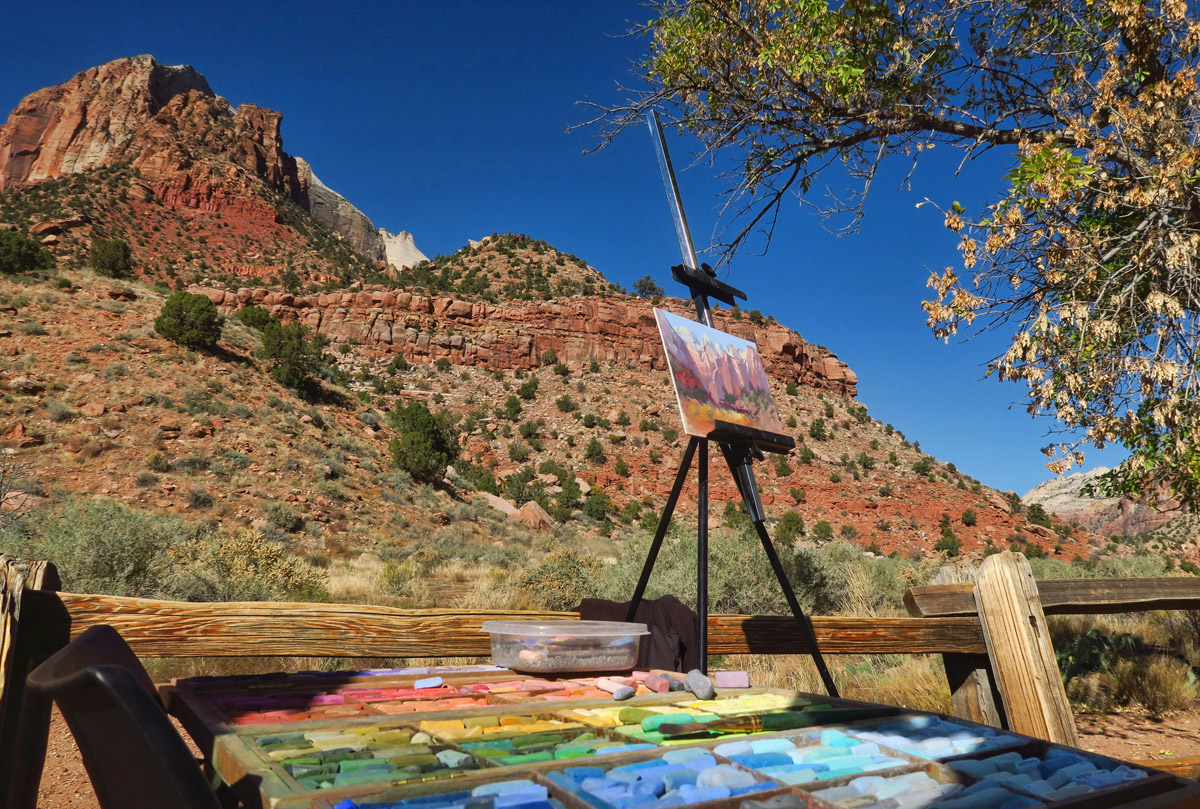 I find such inspiration in watching these artists transfer their emotional relationship with this revered place onto canvas. 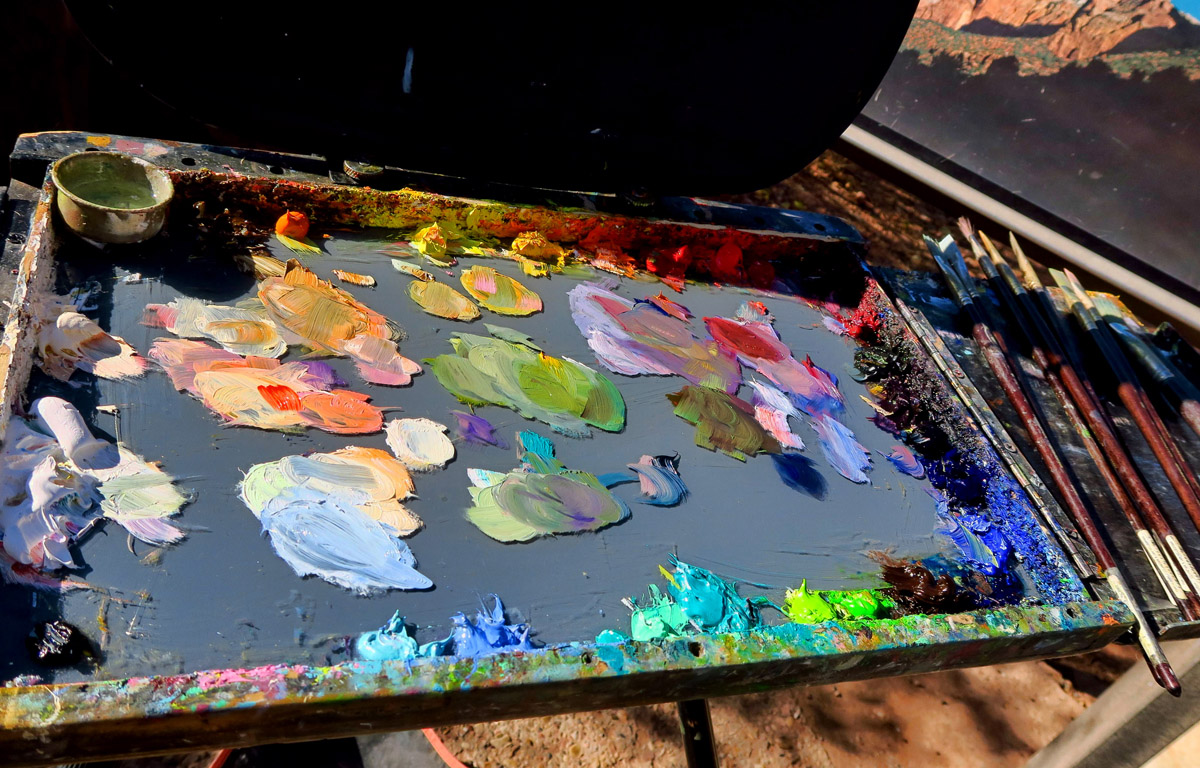 If I can’t paint, I at least love being inspired by those who can. 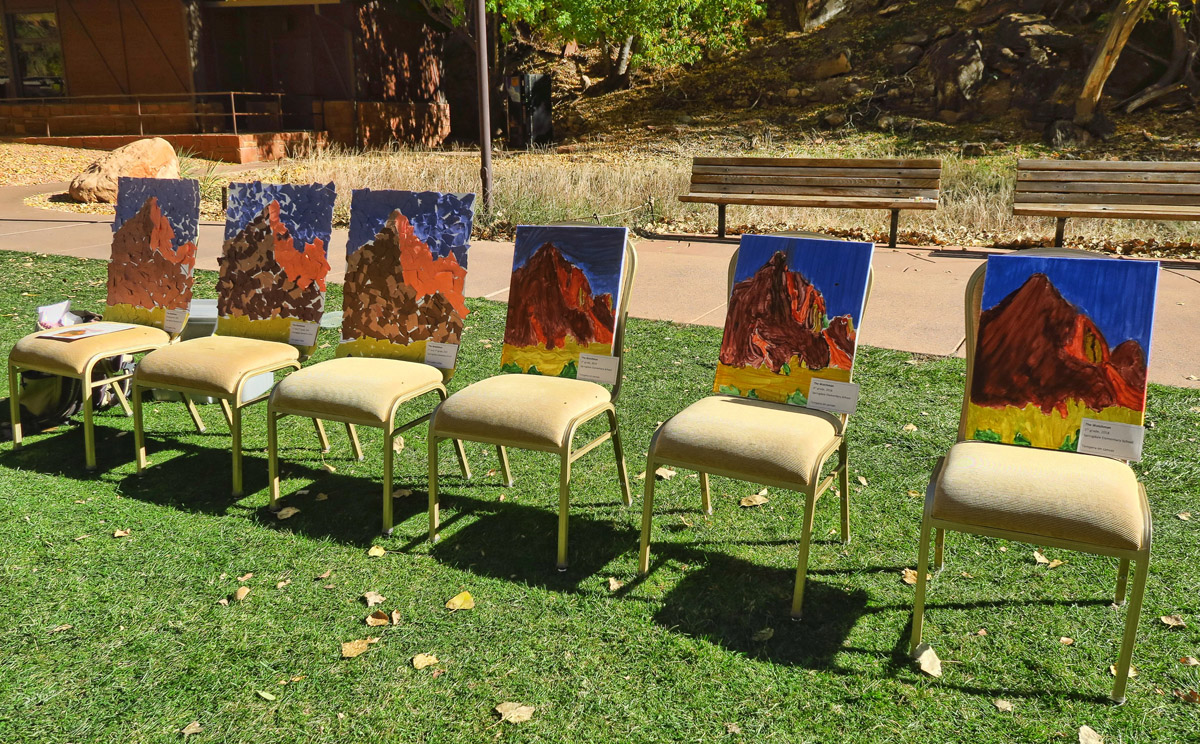 The Plein Air artists of the future.. 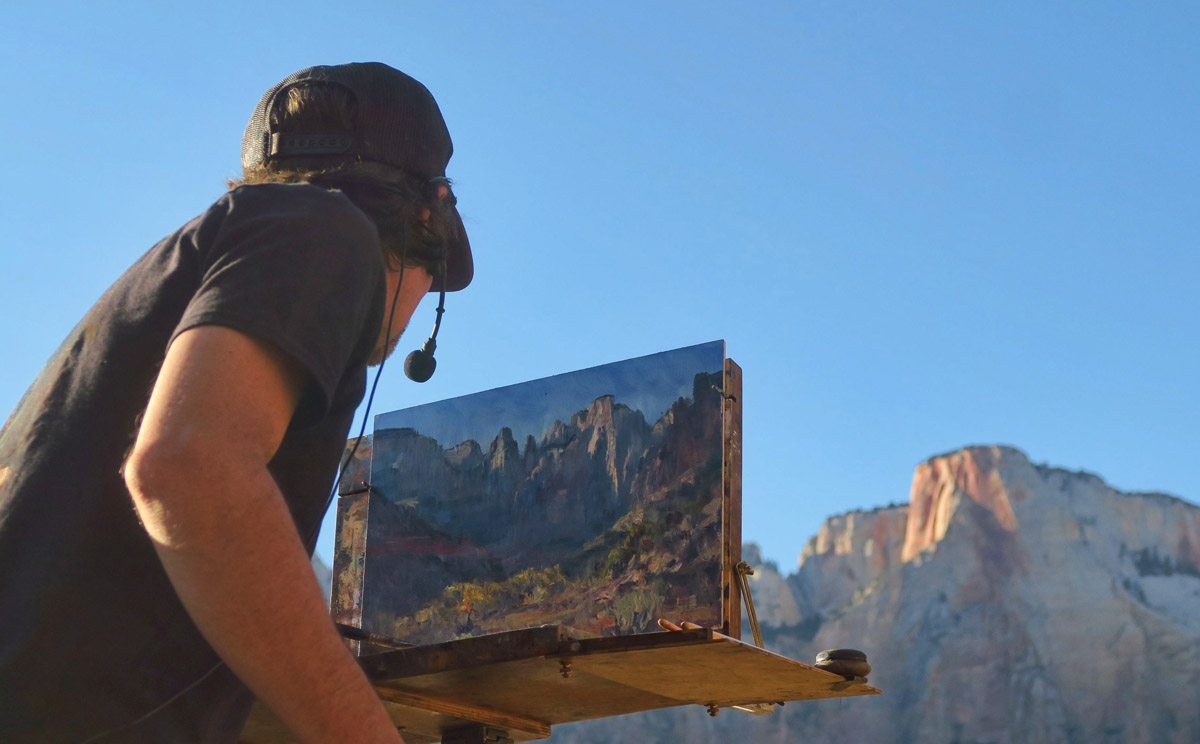 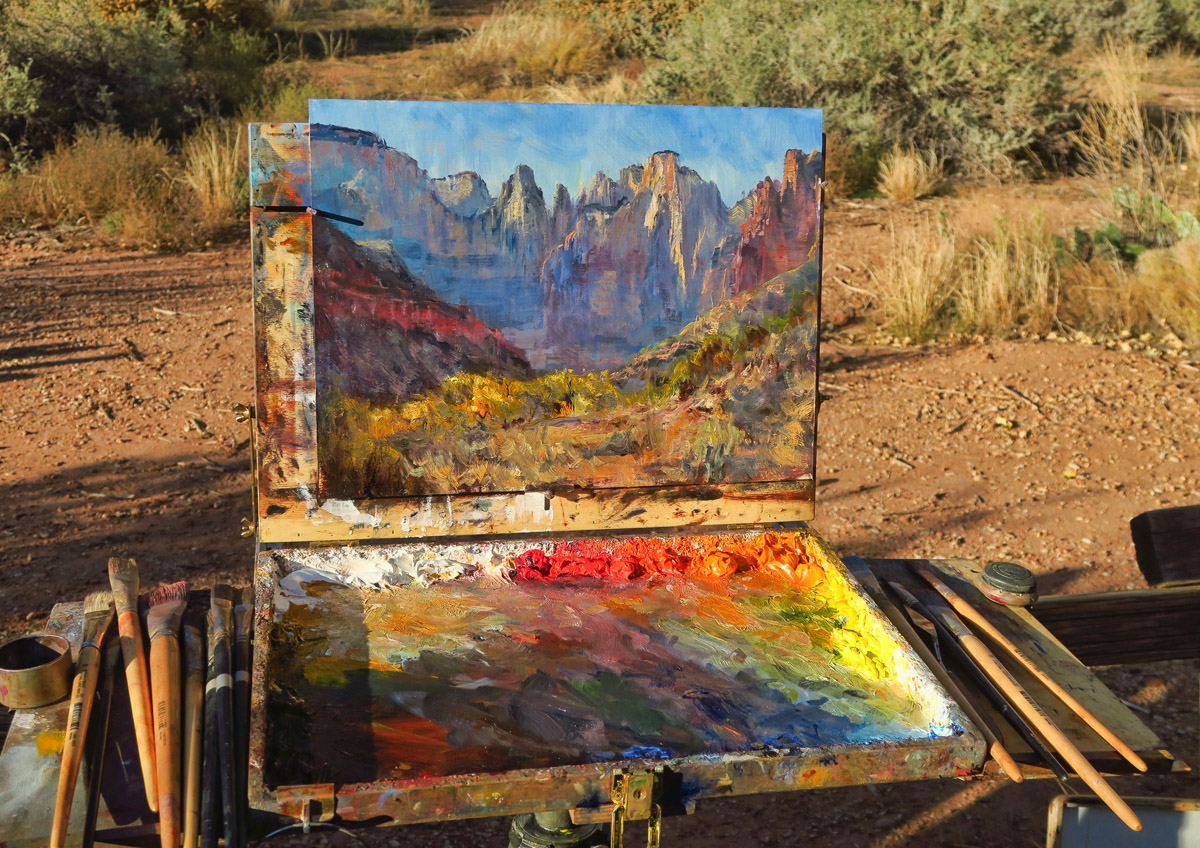 He is a frequent winner of the Invitational “People’s Choice” award. 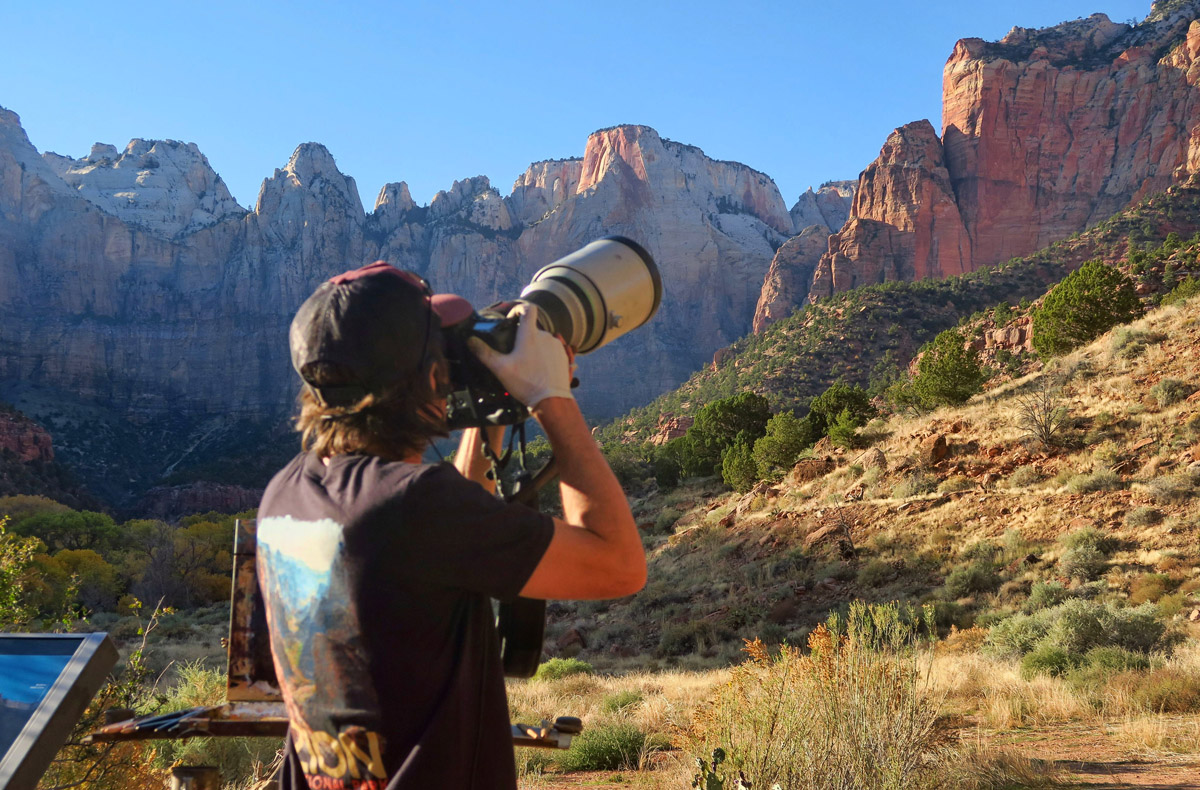 When a red shouldered hawk flies over during the painting demo…

I also must ask myself how much is the exploding nomad population that is causing discontent versus an early case of the seven year itch. March, 2019 will begin my sixth year on the road living full time in the Winnie. I originally set my intentions to do this for four years. Seven years is the longest I have lived anywhere outside of my childhood home, a place that exists only in my memory. So is it time to make a change? Create something new with my life? And if so, what?

I don’t know any answers to these questions. All I know is, it’s time to think…

40 thoughts on “Time to Think”