Aside from spending the money, my only hesitation in taking a Galapagos Islands cruise is that it’s been my 90 year old mother’s “dream trip” for years. As a “bird nut” and wildlife enthusiast, it’s been on her bucket list probably longer than it’s been on mine. So I felt overwhelmed with guilt to be taking this trip without her, even to the point of sending her an “apology email” beforehand.  While Mom’s mind is still sharp as a tack, (she is on email, Facebook, and never misses a blog post from her favorite reading list) her body is less cooperative these days. So although I offered to pay for her to come along, she understandably declined. A trip of this length is challenging for many, let alone someone of 90 years. So instead I will do my best to “take her along” in my posts with greater detail than I usually would devote to a one week trip. I hope my followers find the cruise interesting, but please feel free to enjoy the photos while skipping over the detail in the next eight posts if it’s too much.  You now know the reason why…

The Galapagos Islands consists of an archipelago of 127 islands of which 19 are classified as “large,” while only four are inhabited. Located in the Pacific ocean about 600 nautical miles from mainland Ecuador, surrounded by one of the largest marine reserves in the world, the islands were declared a National Park in 1959, and inscribed as a UNESCO World Heritage Site in 1978. 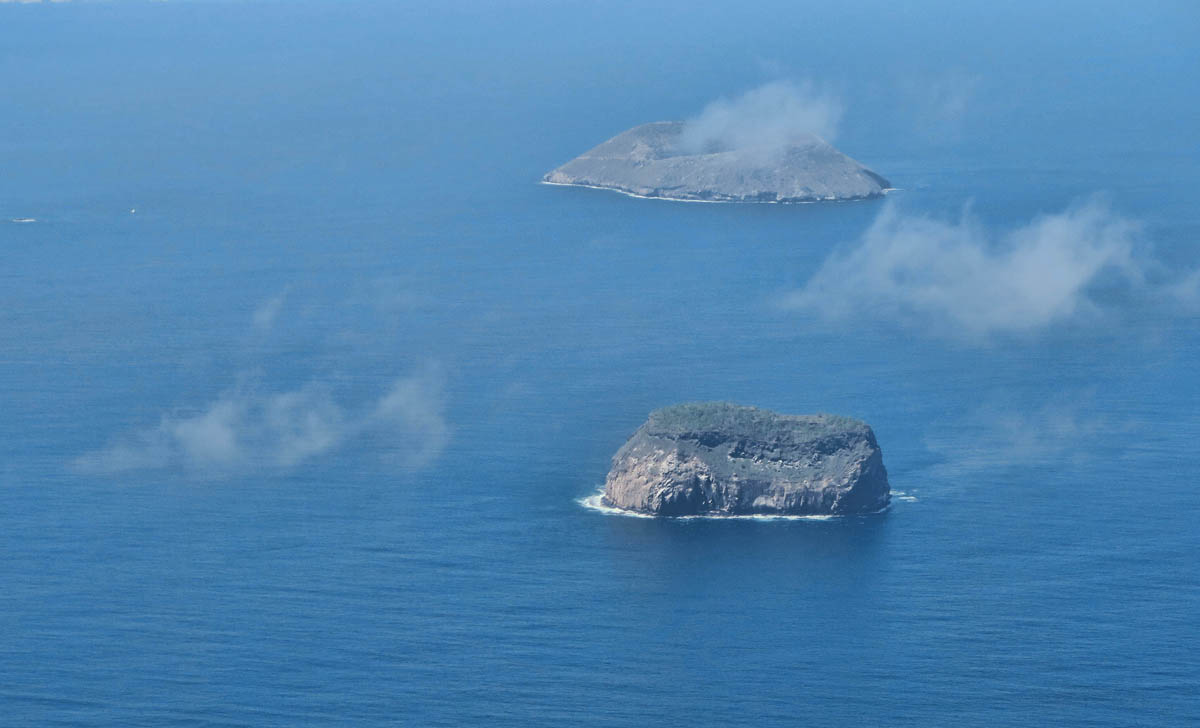 First glimpse of a “Galapagos island” on the fly-over. 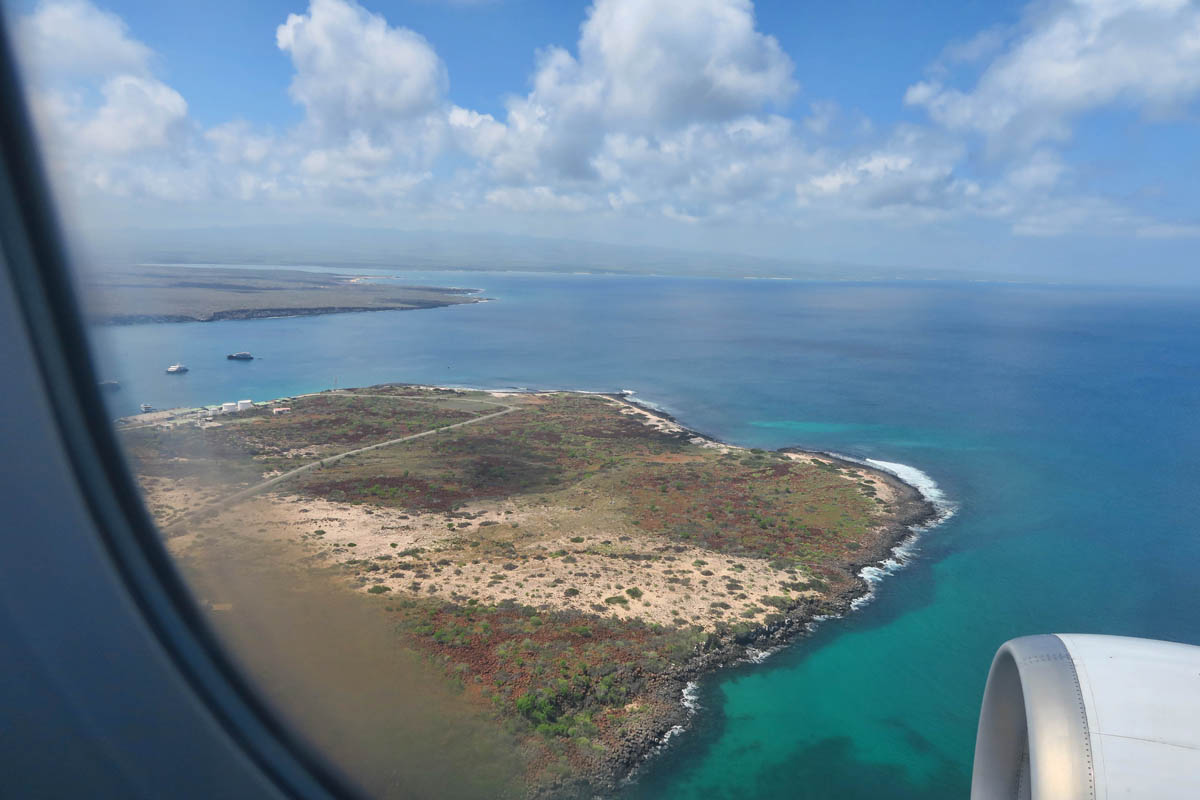 On approach to the main airport on Baltra Island. 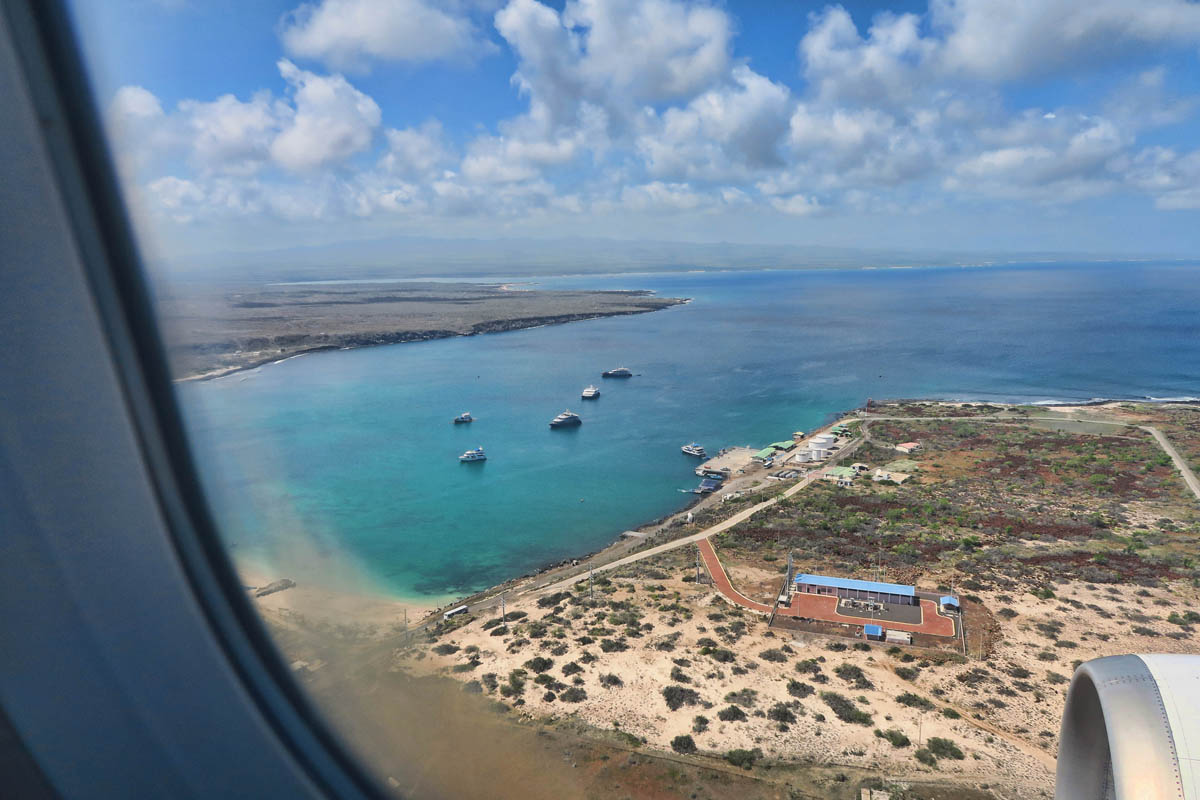 Some boats anchor at Baltra, while others anchor at the south of the island in Puerto Ayoro. Where they are positioned depends on their itinerary for the coming week.

One of the greatest threats to the islands is that of invasive species, therefore strict control is evidenced before I even leave the Quito airport. All luggage must undergo intense scrutiny.  My seed-laden granola and plastic bottles now chucked in the garbage bin, I double-check one last time to be sure I have nothing on the forbidden list. Not only is luggage inspected and sealed at the airport in Quito, but upon arrival, it undergoes two rounds of inspection by two different members of the K9 unit, one looking for fresh fruit, while the other is trained to search for illegal drugs.  This search takes place while all passengers look on, with the threat of public humiliation should the dogs prove successful in their search.

At the airport, I am met by our enthusiastic Naturalist Guide, Fabian Romero Davila. It’s tough to size him up while he is doing double duty as Meet and Greet in baggage claim.  I have been a bit apprehensive about this person who will be leading me around from sunup to sundown for the next eight days.  But once we are on board, it is clear he has a passion about the islands, the wildlife, and preservation, and is eager to share. Fabian is a talented photographer and knowledgeable guide without the know-it-all attitude. It takes a little while to uncover his sense of humor, but as the stress of “finding his flock” lifts, it’s evident that he is committed to everyone on board having the best experience possible.

My twelve fellow passengers are a diverse group of like-minded, fun loving, easy going travelers, with four from the Netherlands, two from Switzerland, two from France, four from California, and me, the nomad. With such a small group, it’s nice to have such diversity so no one feels isolated. 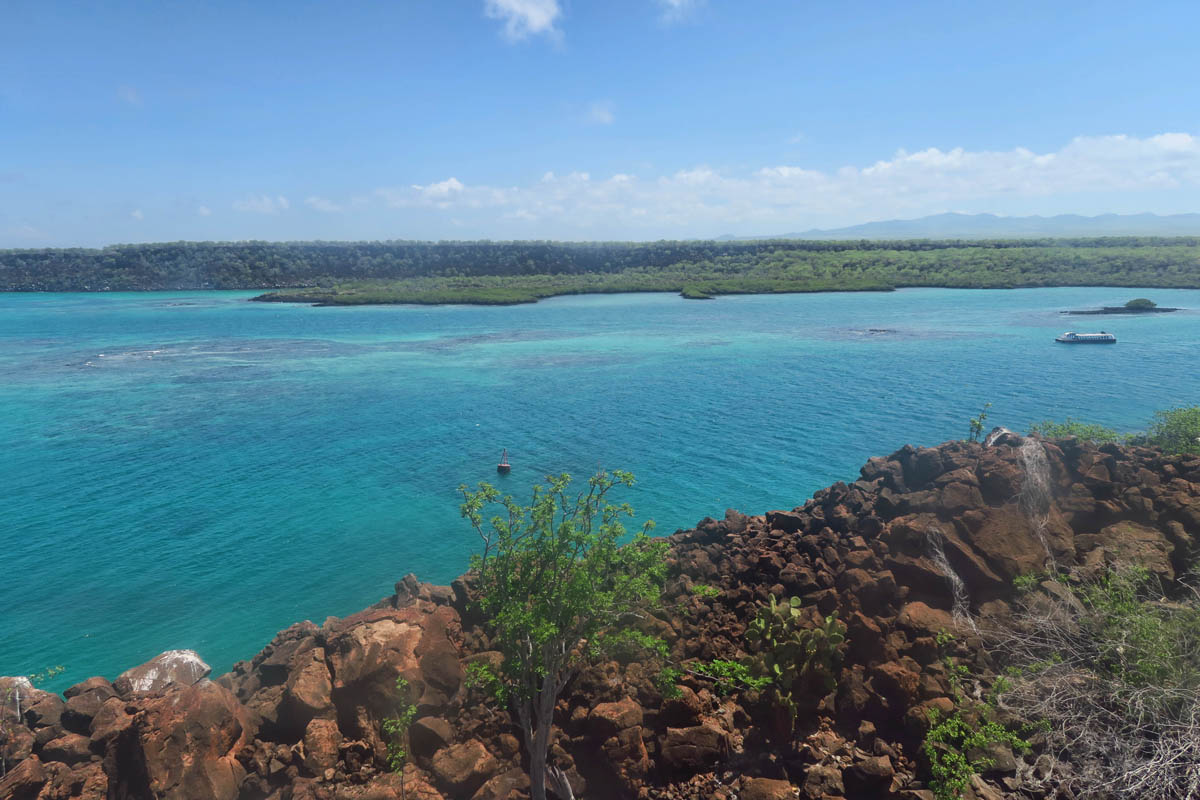 There is no bridge between Baltra Island and the main Santa Cruz island, so this small “canal” must be crossed by boat. 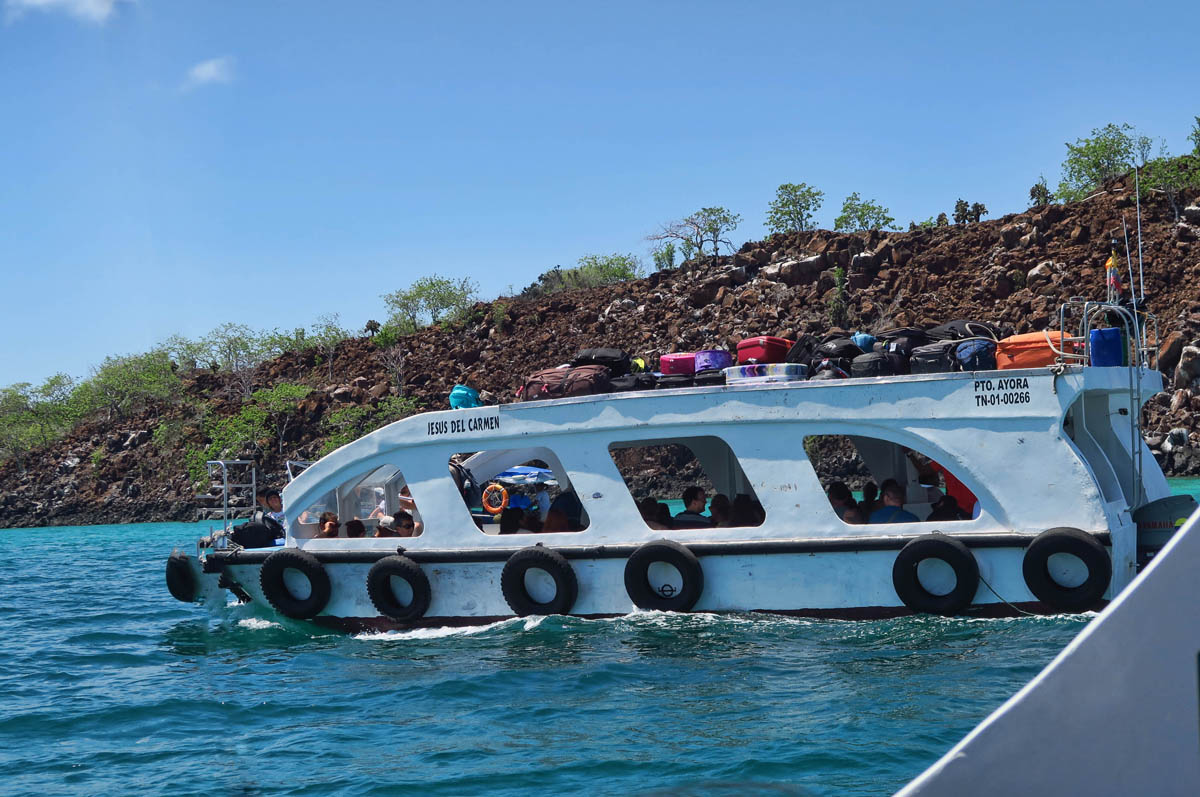 There goes our luggage piled atop that boat. 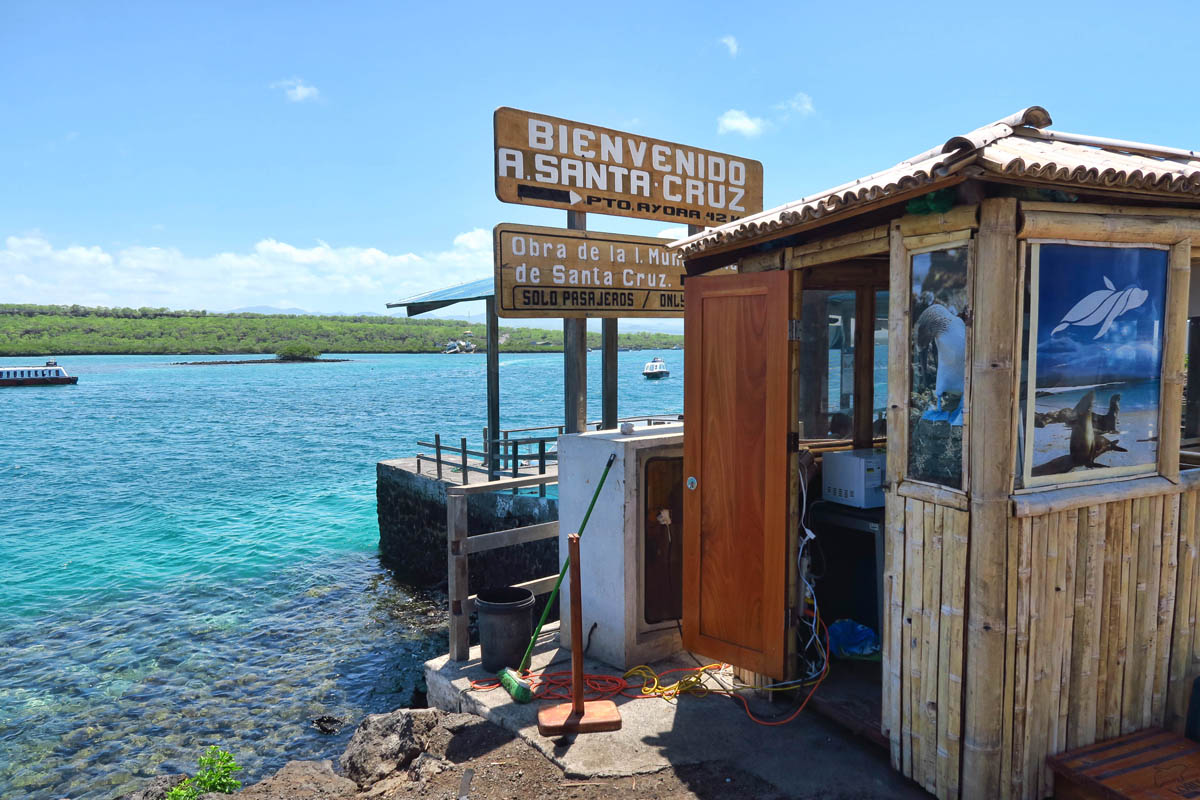 Arriving on Santa Cruz Island, the second largest island in the Galapagos, and the most inhabited with 12,000 residents. 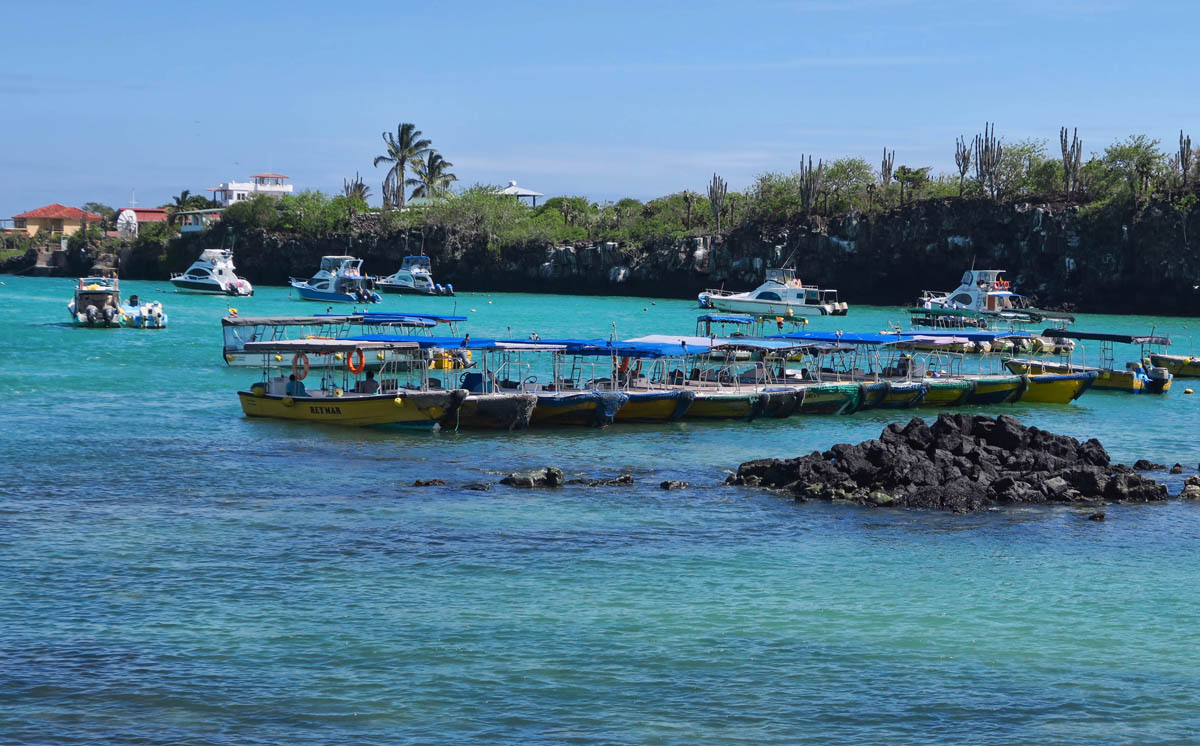 It takes most of the day to travel from mainland Ecuador to finally reach the boat. While there are three airports on the islands, the majority of flights arrive at Baltra, a small island separated from the larger island of Santa Cruz by a canal of aquamarine water. We board an airport bus, then transfer to a boat for a five minute ride across the canal over to Santa Cruz, where we load up for our 45 minute bus to the south side if the island. There, the M/S Beagle is waiting for us in the busy harbor of Puerto Ayoro. Crossing the island, we experience a dramatic change in topography as we drive across the arid lowlands of red volcanic soil dotted with towering prickly pear cactus. We gain 2,000 ft in elevation as we travel up and over the misty verdant highlands and forest of Scalesia trees, endemic to the islands. 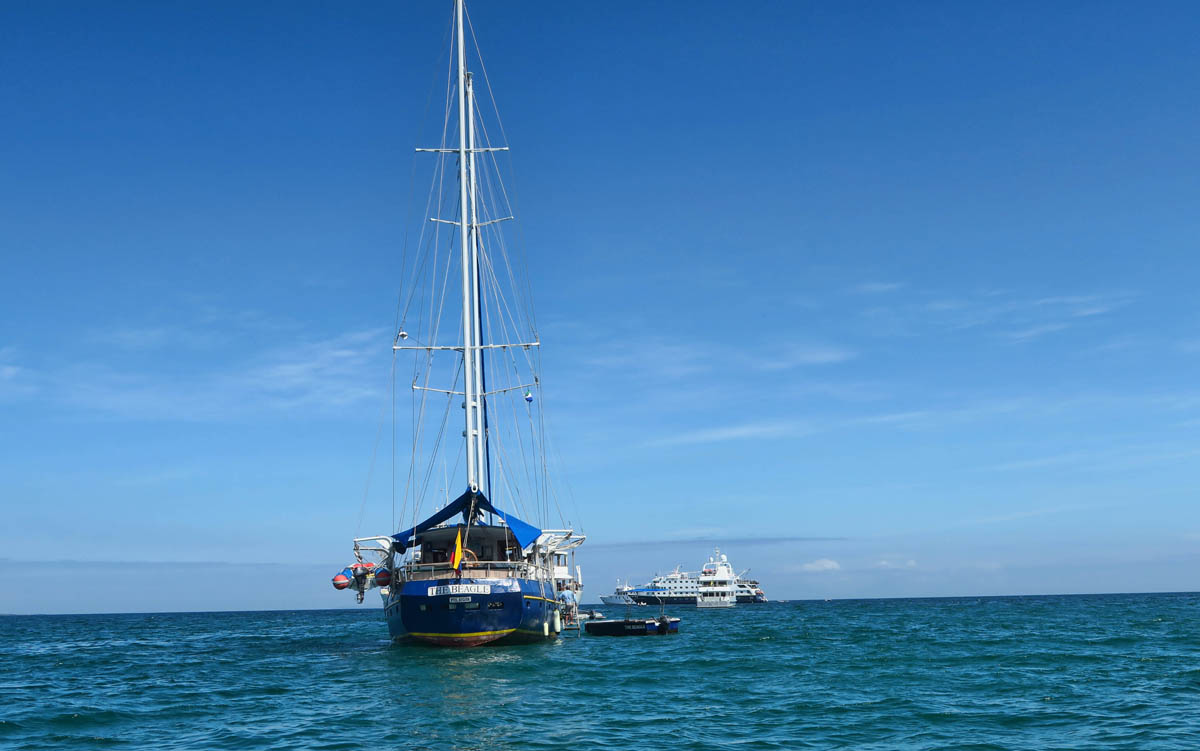 Getting our first look at the M/S Beagle. 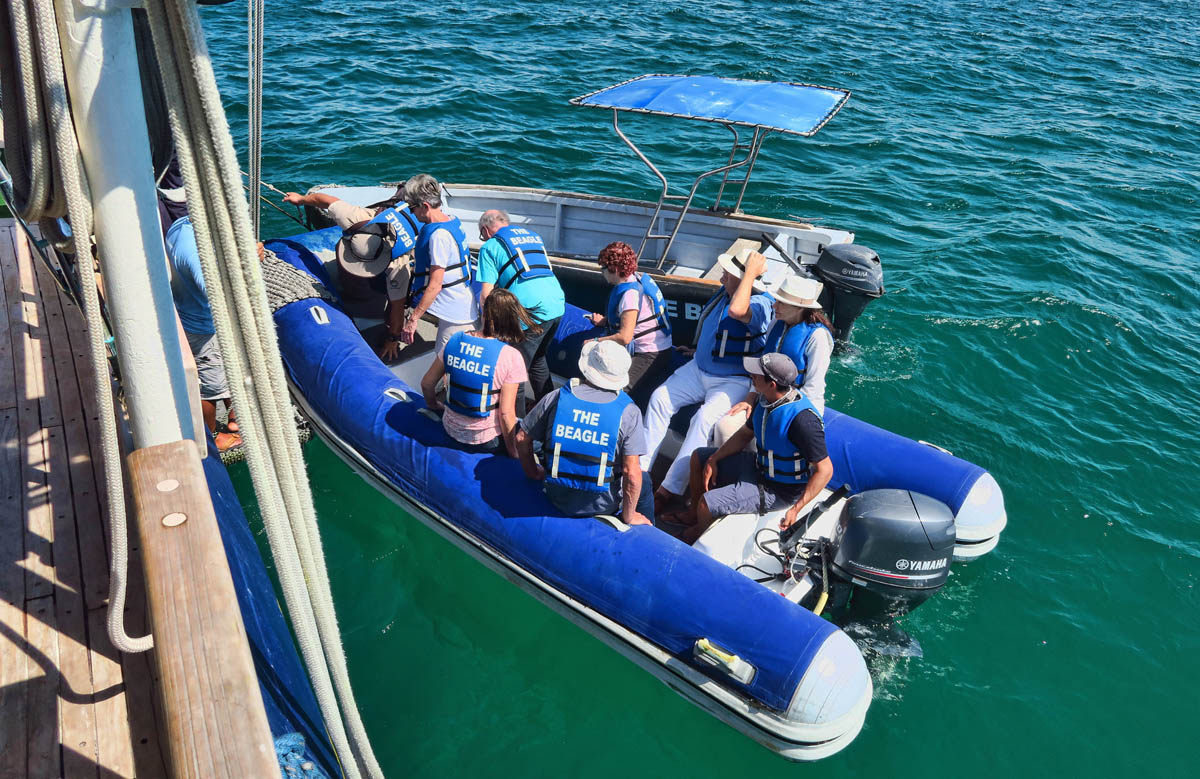 The ship has two zodiacs, or rubber dinghies for the purpose of transferring to and from the ship. 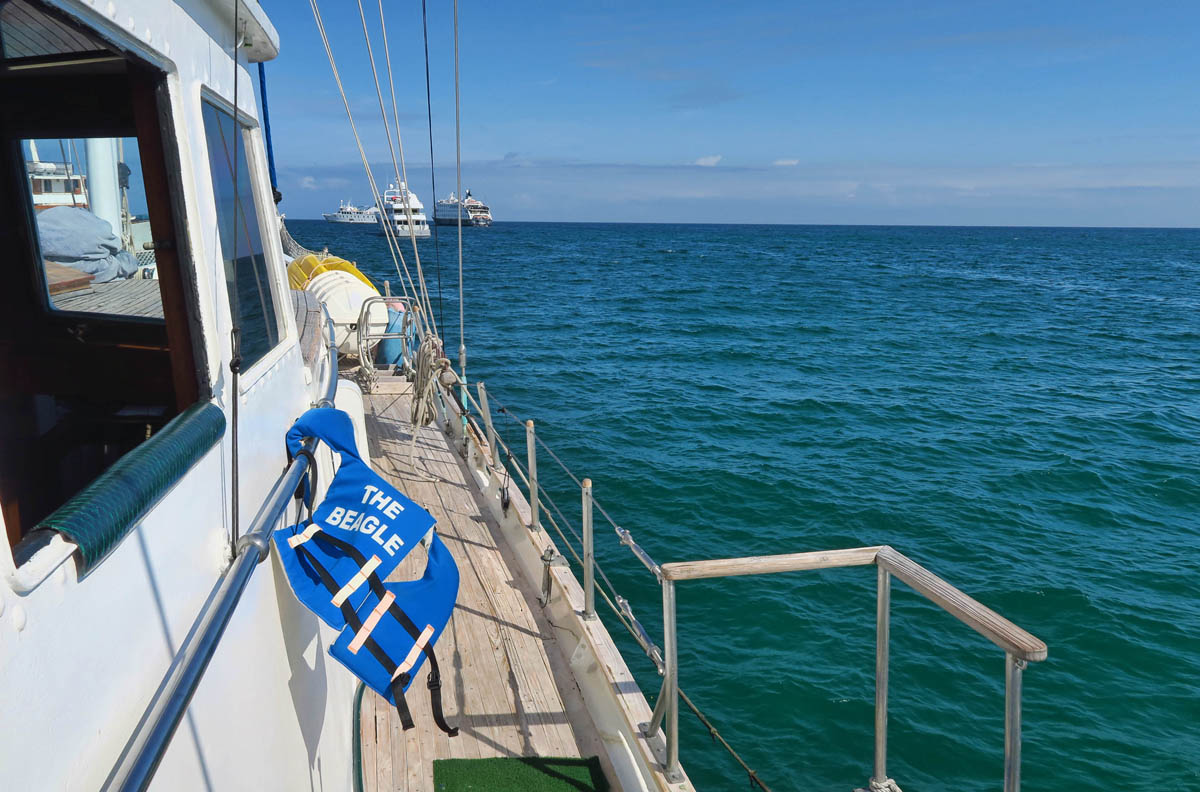 It’s great to be on a sailboat again, even if it is a “motor sailboat.” 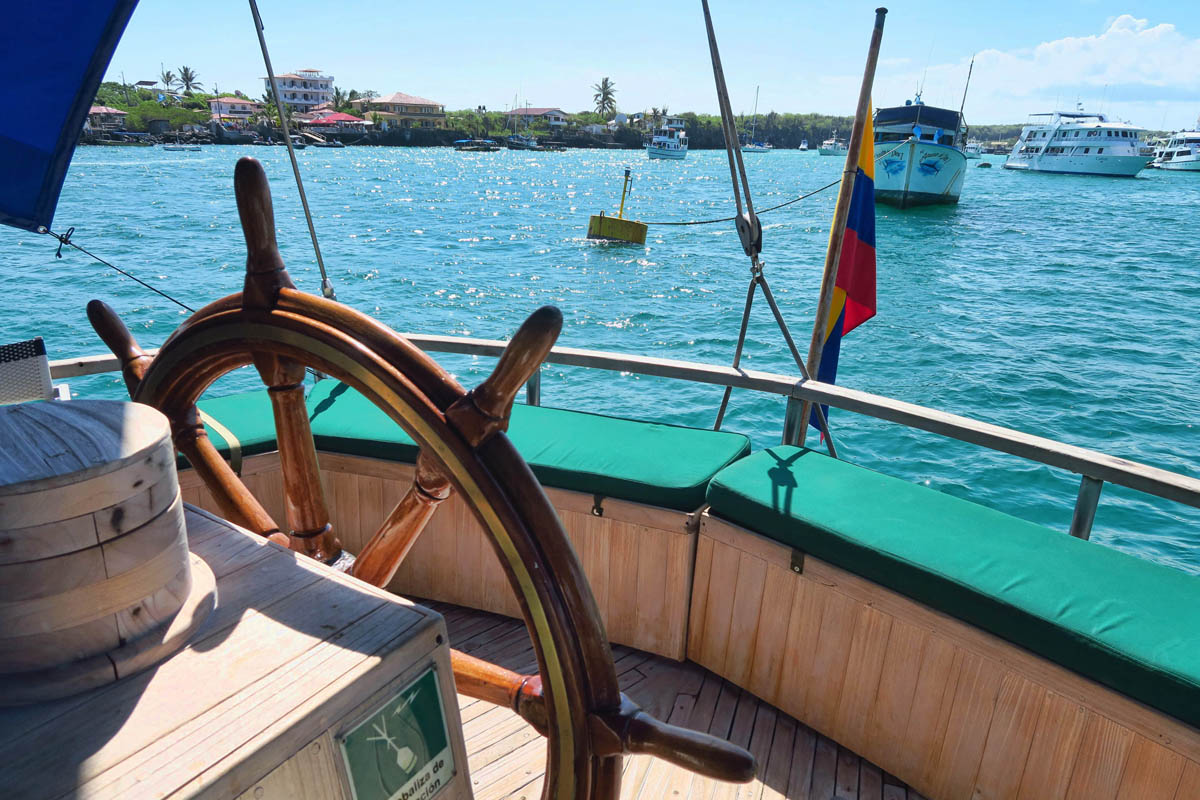 Lots of places to hang out and enjoy the view. 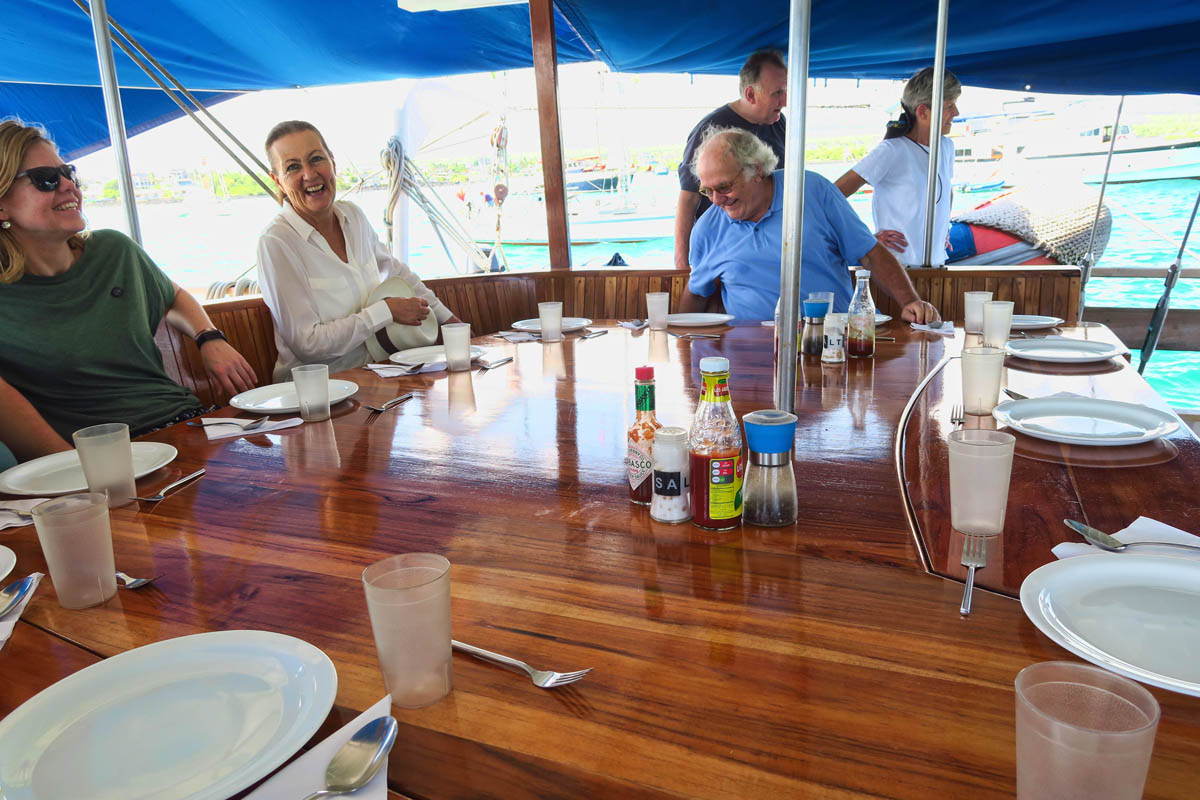 But one of my favorite things is this giant table on deck which allows us to take all meals “al fresco.” 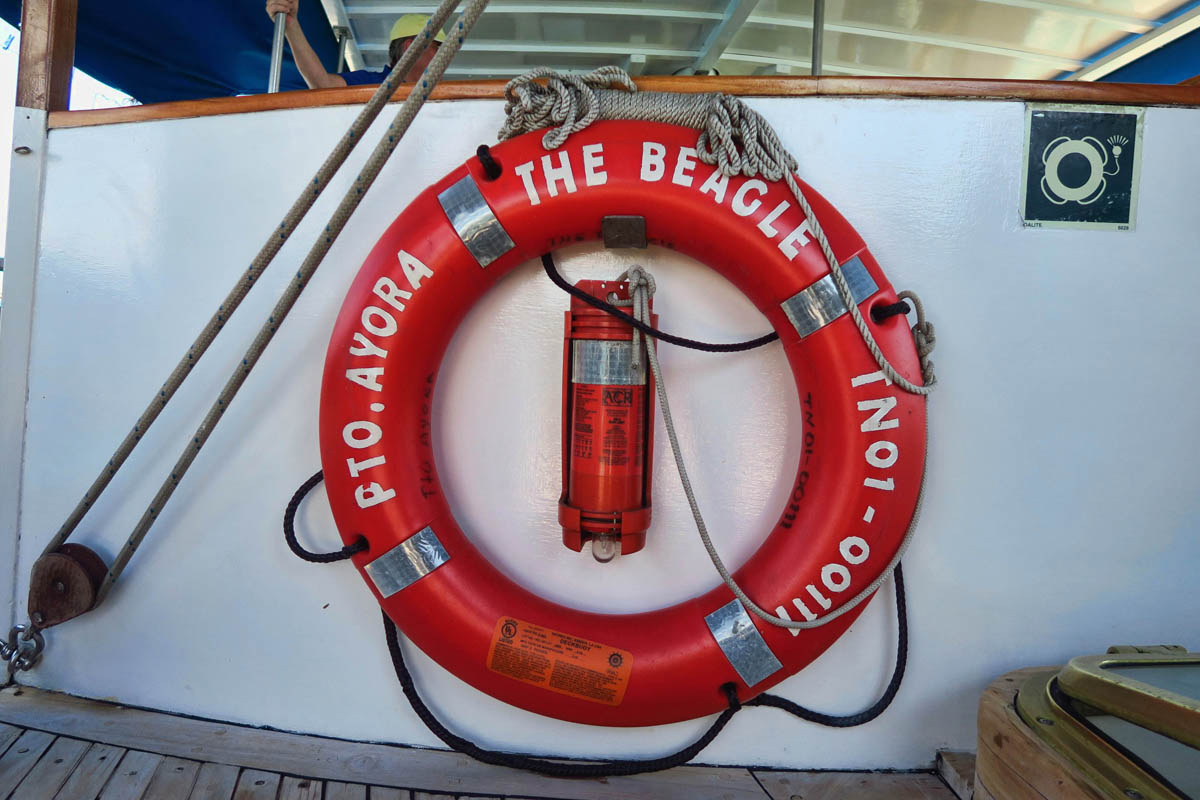 Once we reach Puerto Ayora, we board a zodiac for the short ride across the harbor where we get our first look at the M/S Beagle, named after the HMS Beagle in which Charles Darwin made his famous voyage to the Galapagos Islands in 1835. The 105 ft steel-hulled brigantine with teak decks, built in 1978, would be our motor/sailboat home for the next week. The ship has seven double passenger cabins and one lone single cabin located at the stern where the ship tapers, making it slightly smaller than the double cabins amidships. Perfect for me! I was worried that I wouldn’t have a porthole, but instead I have three!  And a fourth in my “head” (bathroom.)

One of my favorite features of The Beagle is its giant shaded table up on deck, making it possible for us to enjoy every meal outdoors. Though we have a couple of overcast days to start, the weather continually improves during the course of the week, making it a lovely setting to enjoy our meals with a view of the surrounding ocean. 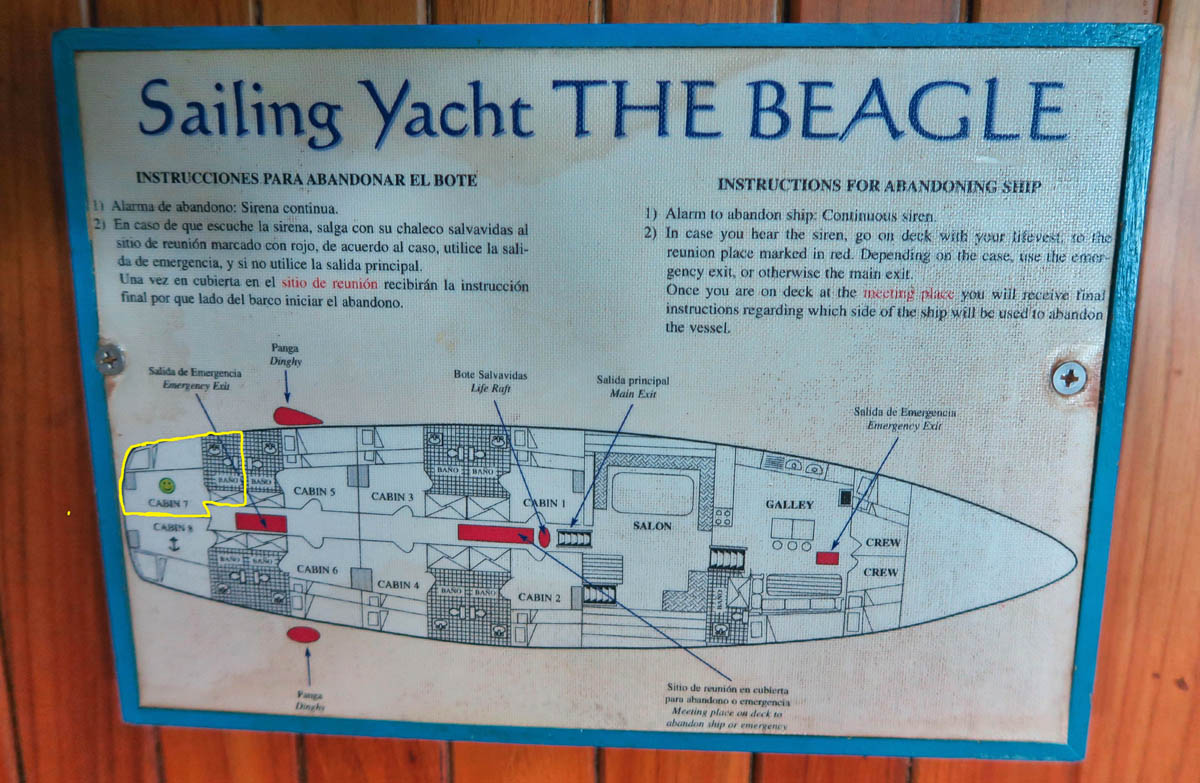 A layout of the Beagle. I have highlighted my cabin, #7 in the stern section, noted in yellow outline to the left. 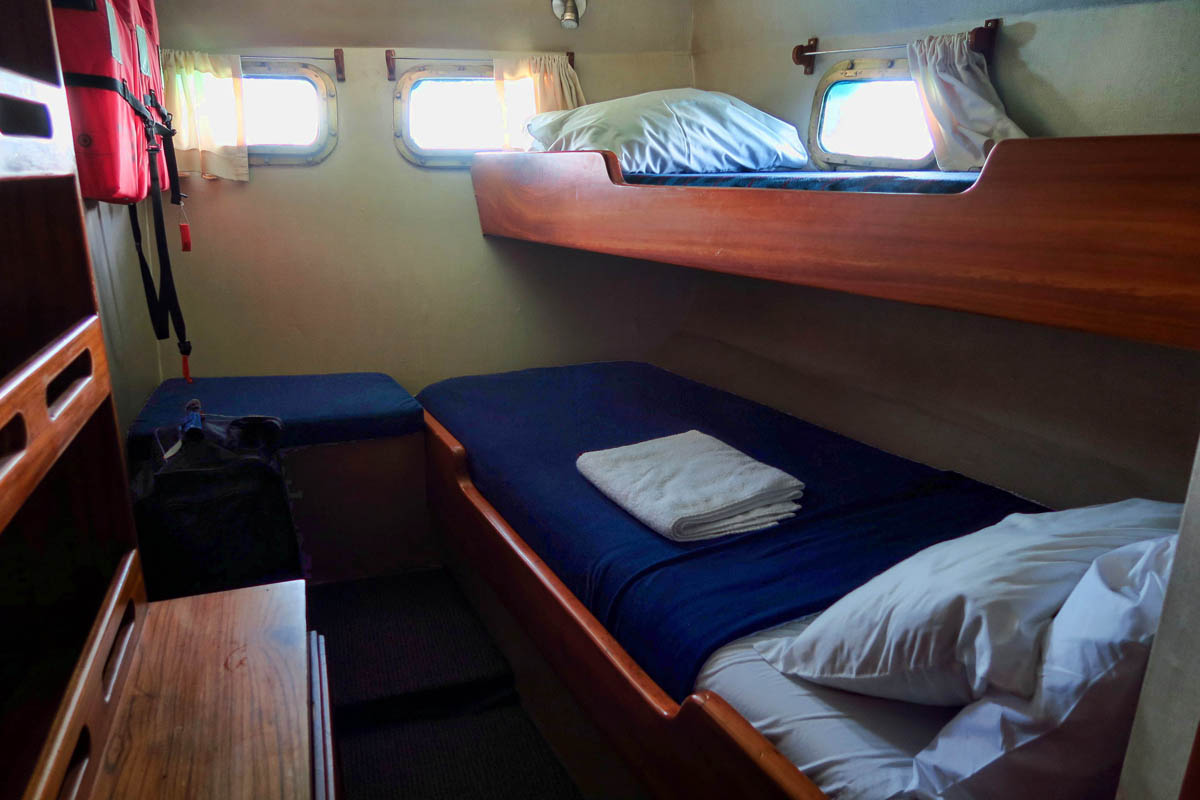 One of the crewmen leads me to my cabin. I am relieved to see not one porthole, but three! 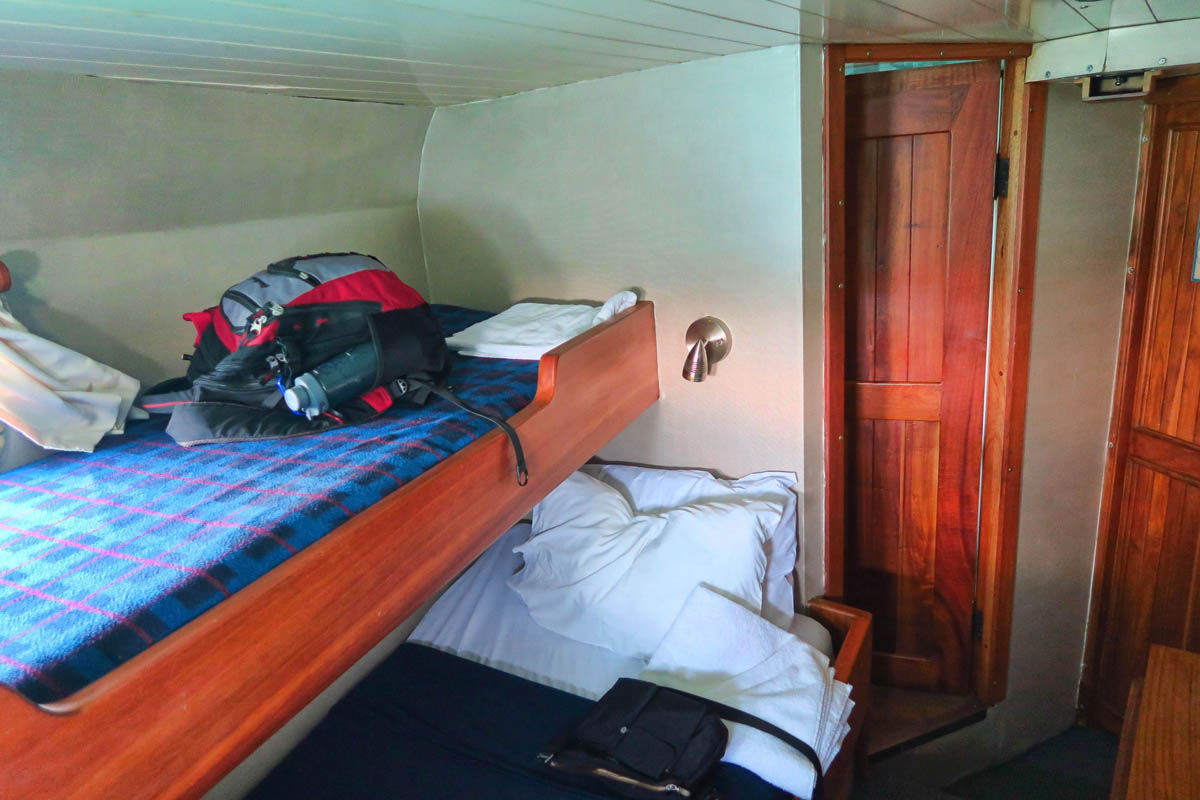 While the cabin is small, it has all the space I need. Upper bunk for all my junk, and lower bunk for me! 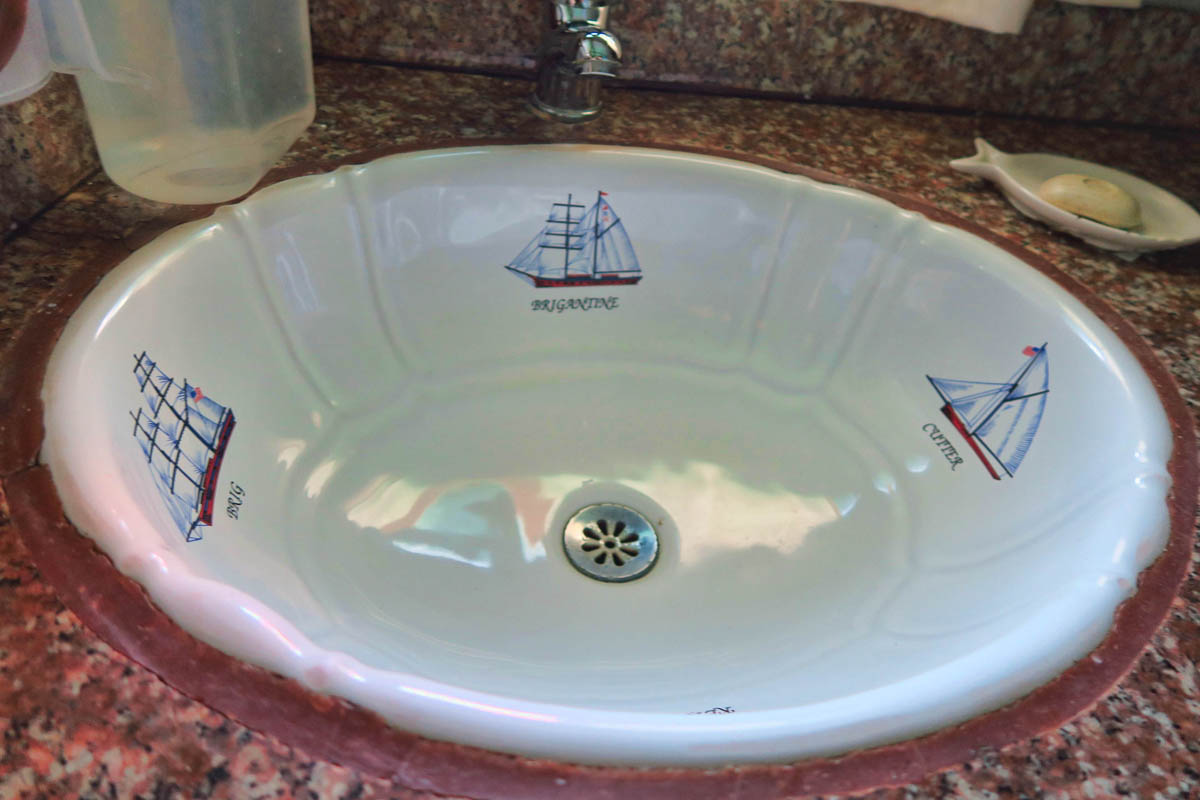 I love my bathroom sink.

I am relieved to see that The Beagle, while elegant with its stately polished teak wood, sleek lines, and carved wheel at the helm, has a very casual atmosphere on board. The clothes that were stolen from my room back in Quito were mostly my summer things, including two pairs of my favorite shorts and four short sleeved tee shirts. Replacing them in a country where I am larger than most men, let alone the petite women had proven to be impossible, save for a few souvenir tee shirts. So I am relieved to see that I will not feel out of place due to my lack of “cruise wear.”

Given that the most iconic symbol of the Galapagos Islands is the giant land tortoise, (in fact the islands are named for “Galapágo,” old Spanish word meaning “tortoise,”) it seems only fitting that we begin our adventure at the Charles Darwin Research Station. The vision of the Charles Darwin Foundation and its Research Station is “to ensure a sustainable Galapagos by providing breakthrough research which informs conservation actions and inspires humanity to preserve this extraordinary archipelago and our planet as a whole.” 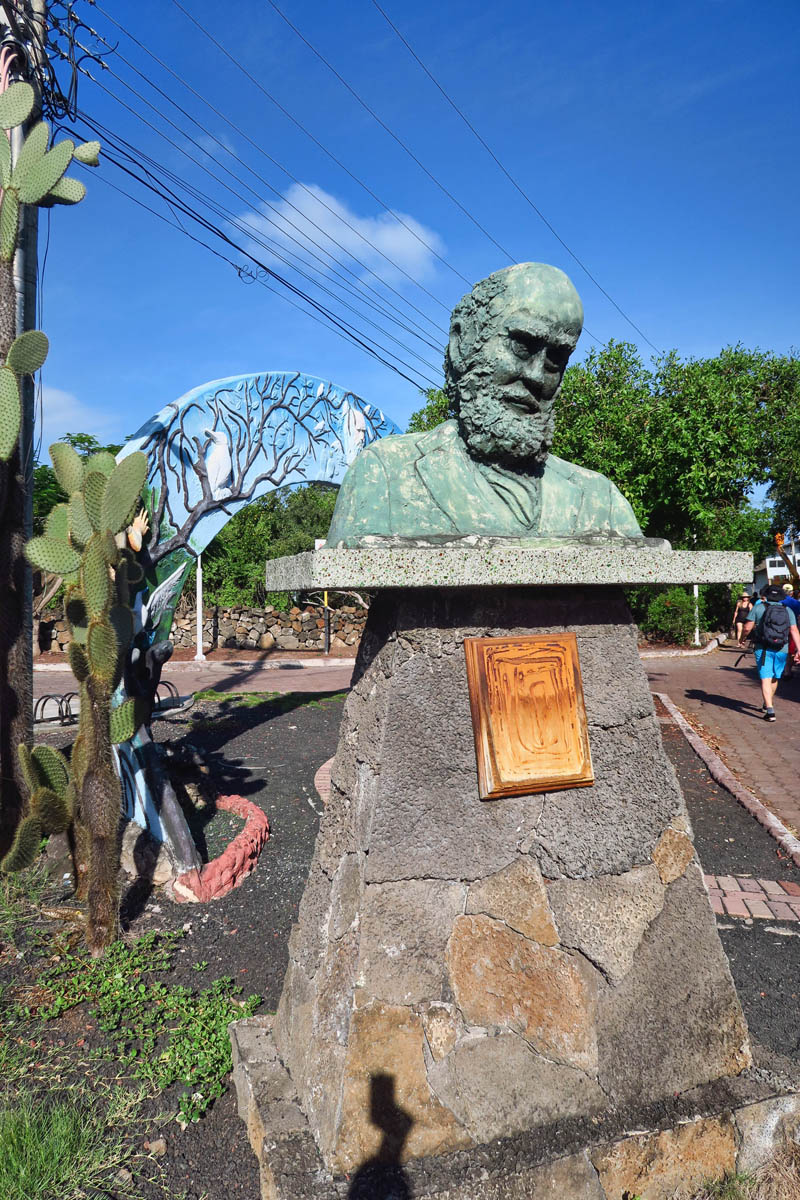 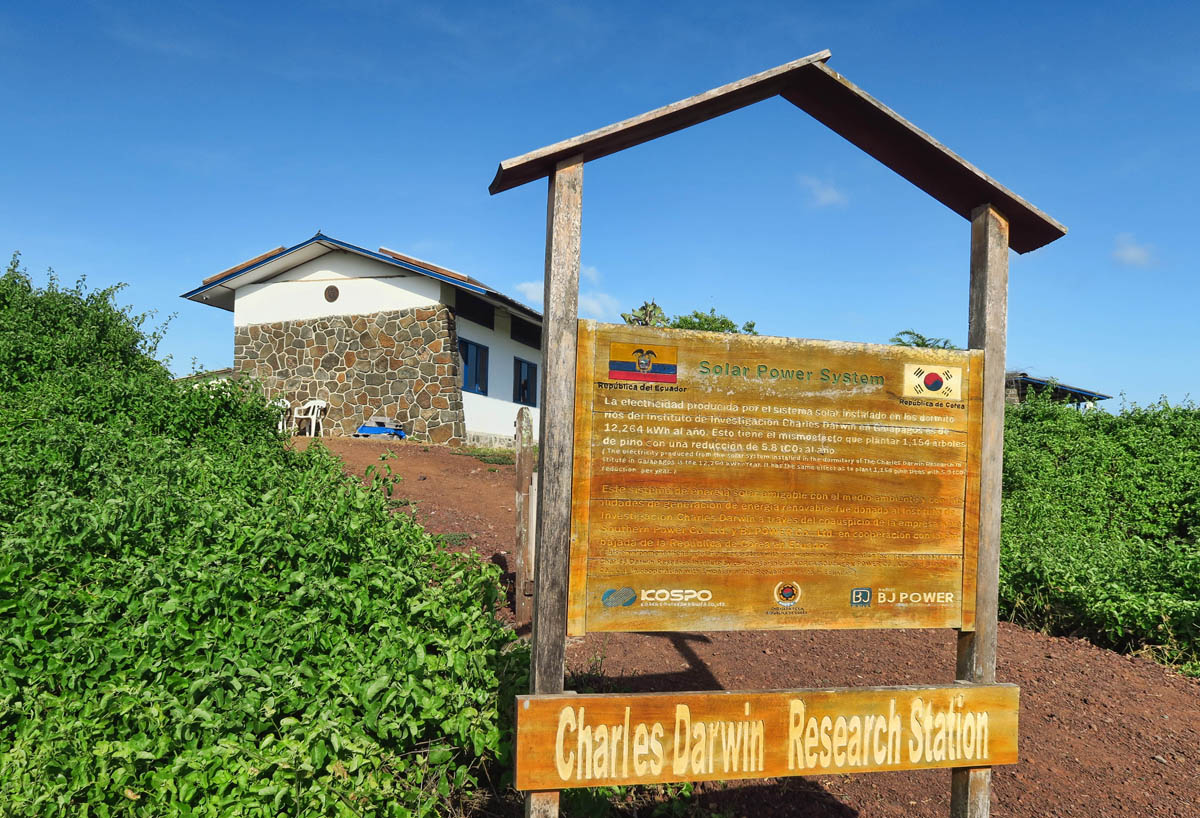 While the main focus of the Research Station is conservation of the flora and fauna of the islands, they also care and rehabilitate wildlife that has been injured. 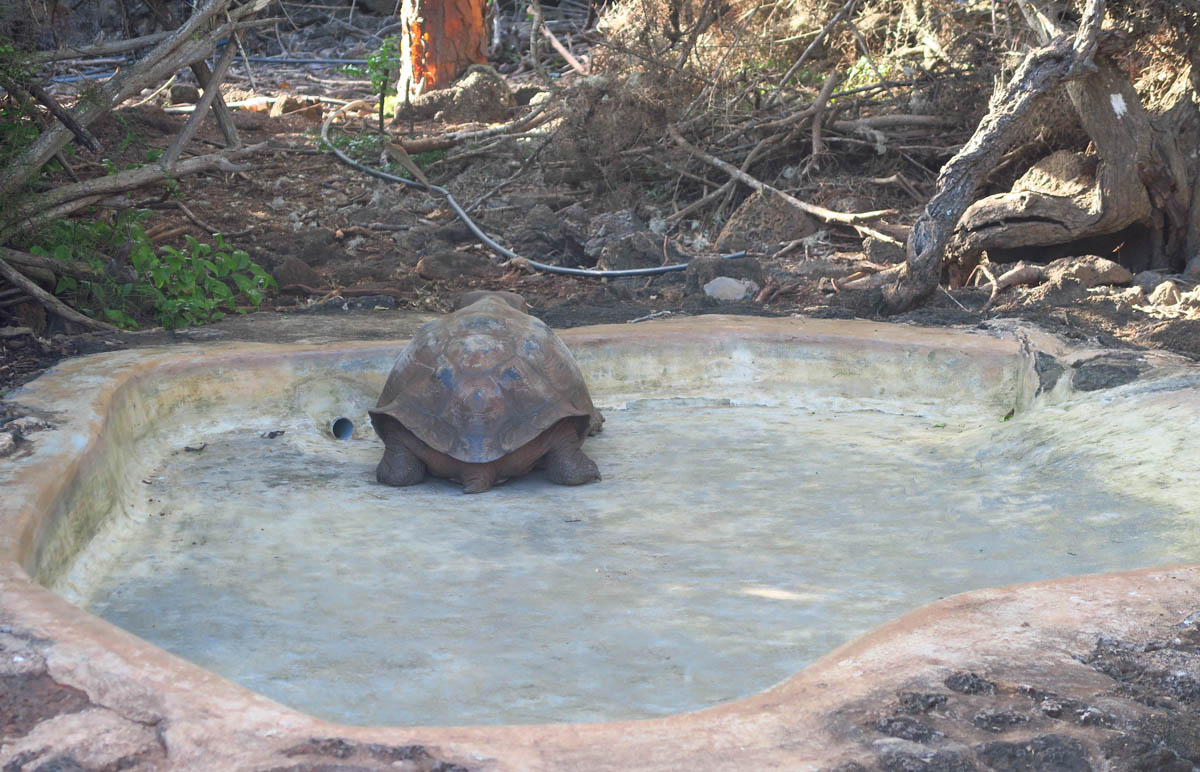 Eleven species of the giant land tortoise can be seen here, but in zoo-like atmosphere. 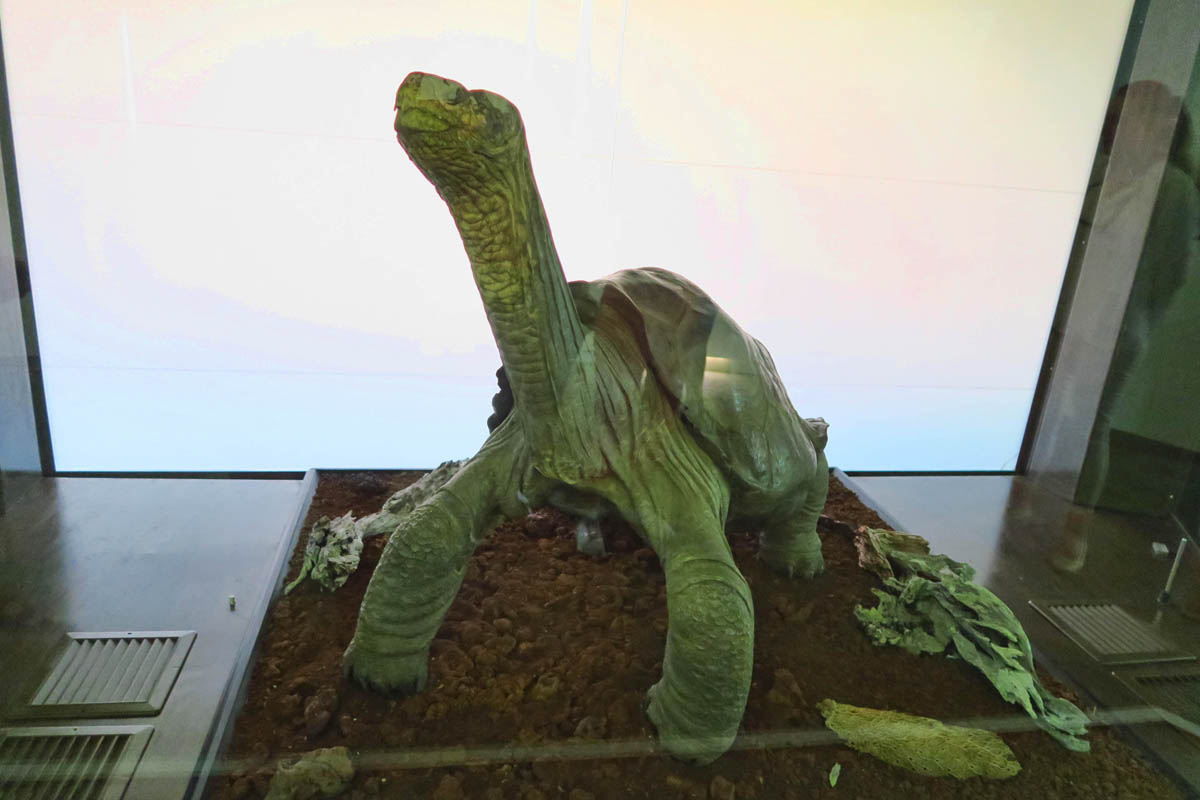 This is “Lonesome George,” the last of the Pinto Island species, now extinct. He died in 2012, and was sent to NYC for preservation. He now has his own climate-controlled exhibit. 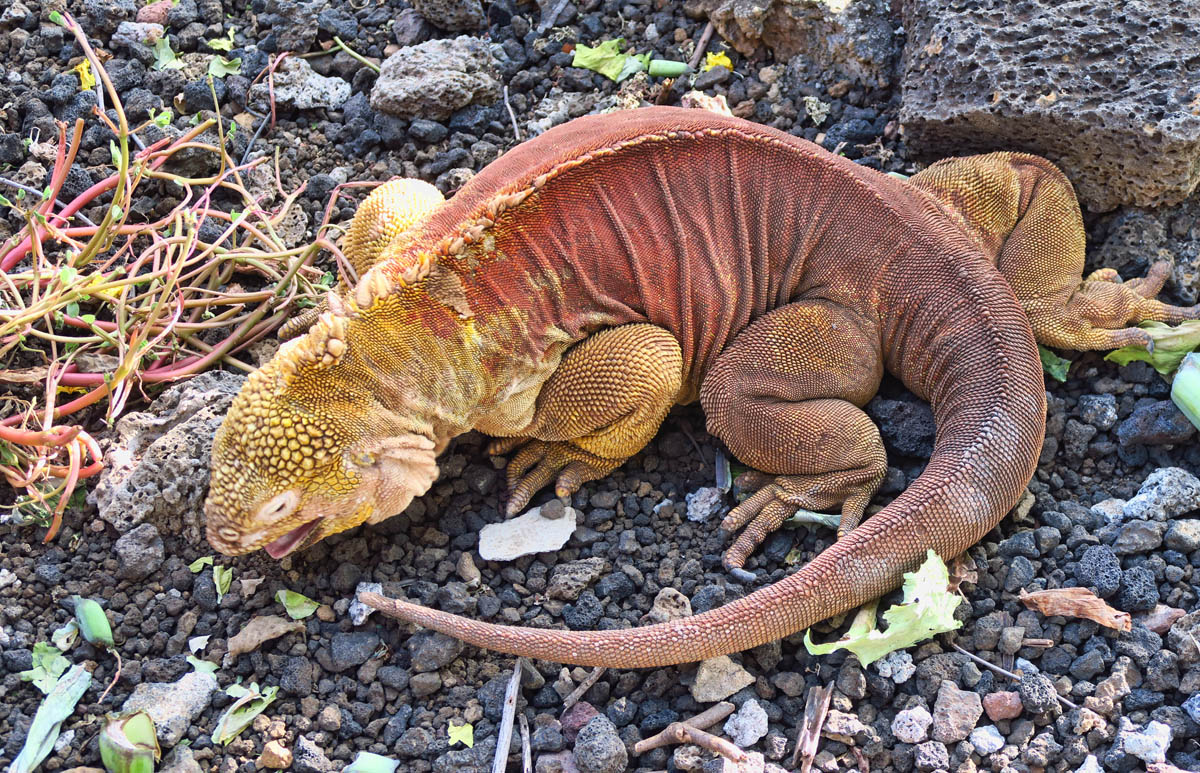 The research station also studies and protects land iguanas. Galapagos is home to two endemic species of land iguana which exist nowhere else on earth. They are among the largest iguanas in the world. 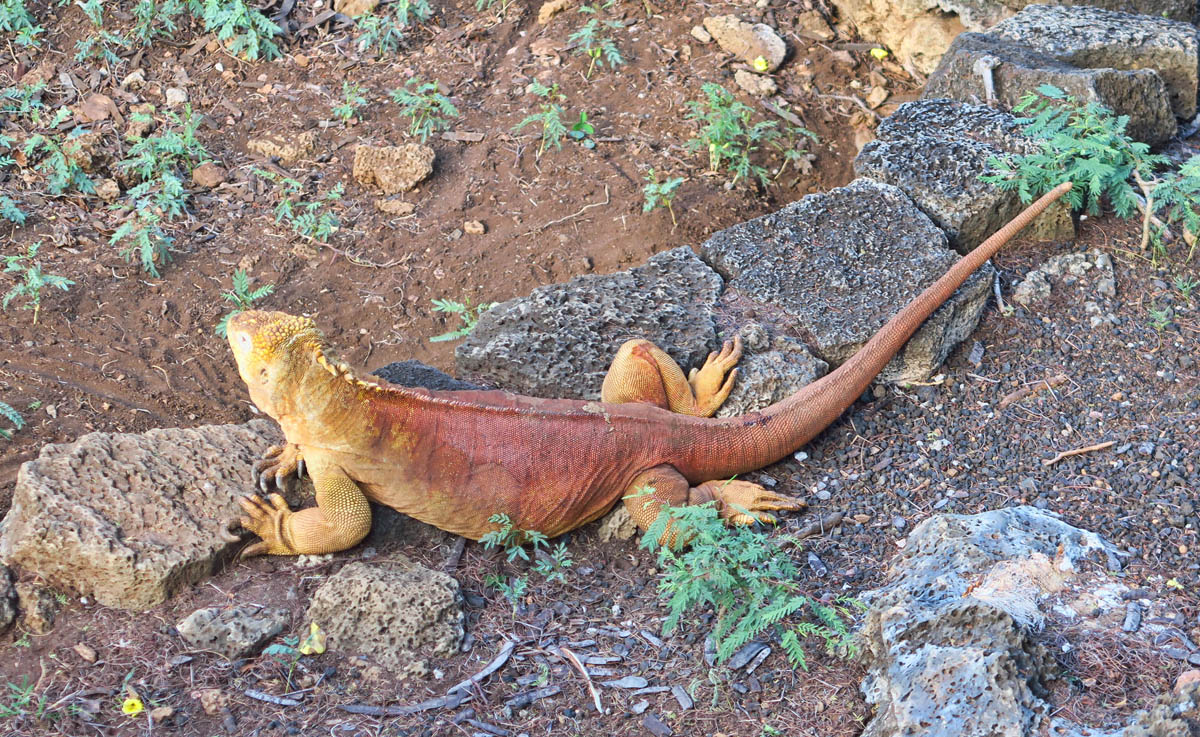 Scientists estimate that tens of thousands of land iguanas once lived on Santa Cruz Island alone, but by 1976, fewer than 100 remained.

Our first activity is to tour the giant land tortoise breeding center. What was once 14 different species of land tortoises spread over nine islands is now down to 10 species living on six islands. The most recent species to reach extinction, the Pinta Island tortoise, died as recently as 2012, with “Lonesome George” being the last specimen, now stuffed and in a climate-controlled exhibit in the center. Since the land tortoise can survive up to one year without food or water, they were deemed to be an excellent source of fresh meat on ships, so were taken by whaling ships, fur sealers, and pirates passing through before the islands were protected. A once estimated 200,000 tortoises has now dwindled down to 20,000 remaining on the islands.

One of the main threats to the land tortoise is invasive, non-indigenous animals such as rats, dogs, goats, and pigs. Therefore, the research center digs up the tortoise eggs the size of a tennis ball which the female tortoise lays in numbers from two to 16, and incubates them at the breeding center until they are large enough to fend off attacks from a predator the size of a rat.  Then they are released.

I am grateful to have visited this important research facility where scientists, educators, and volunteers are committed to the preservation of the island ecosystem. However, I am glad it was our first activity, as I would have been sorely disappointed by the “zoo-like” atmosphere had we come here after having seen the tortoises in their more natural habitat. 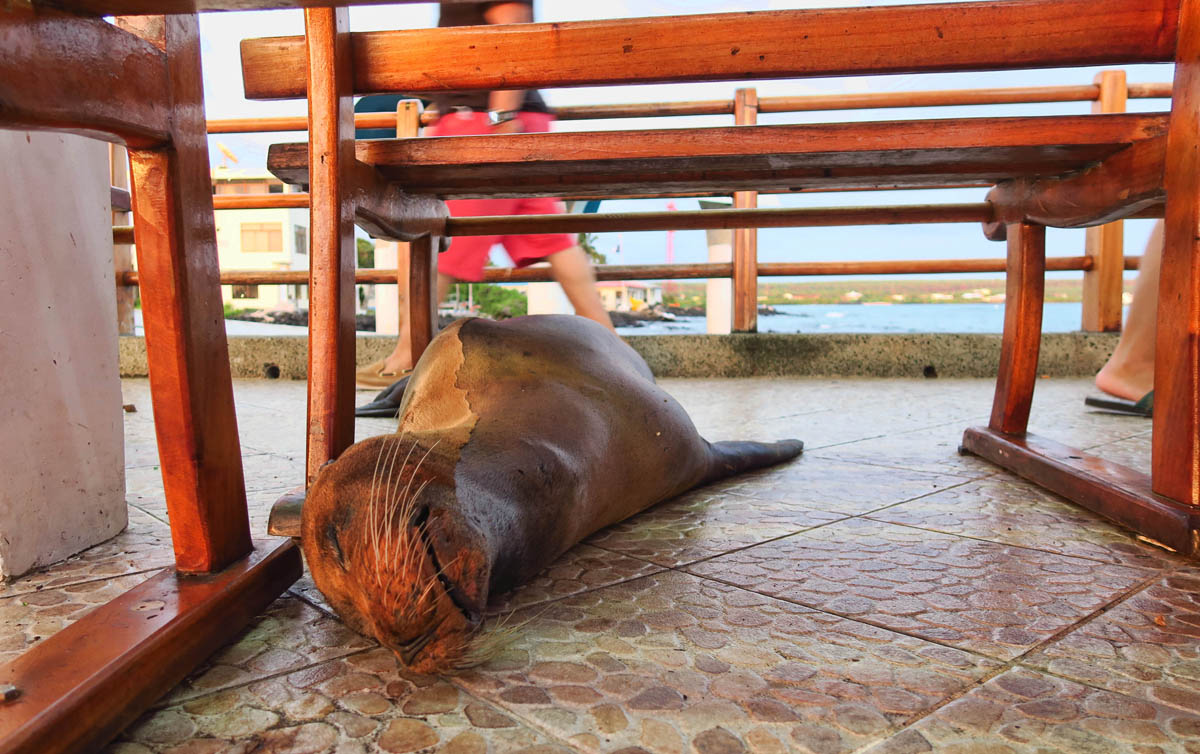 On the docks of Puerto Ayoro, one must be careful where they step. 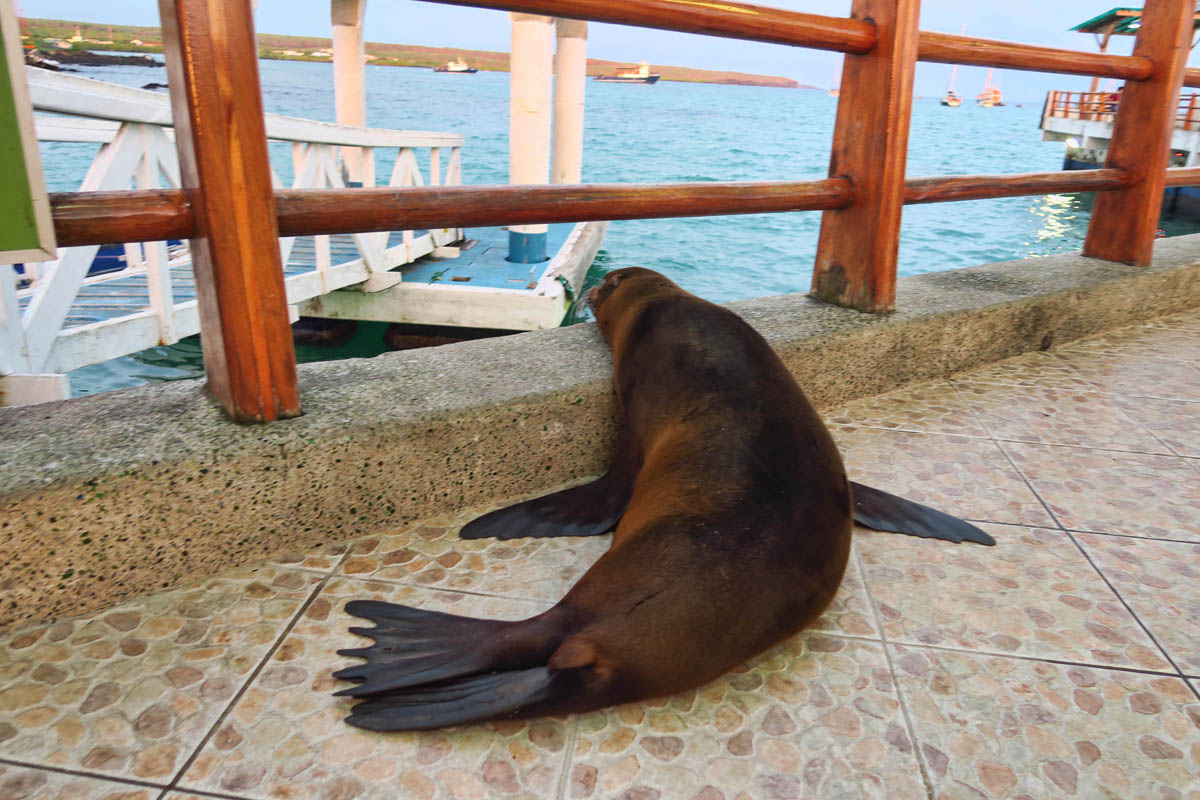 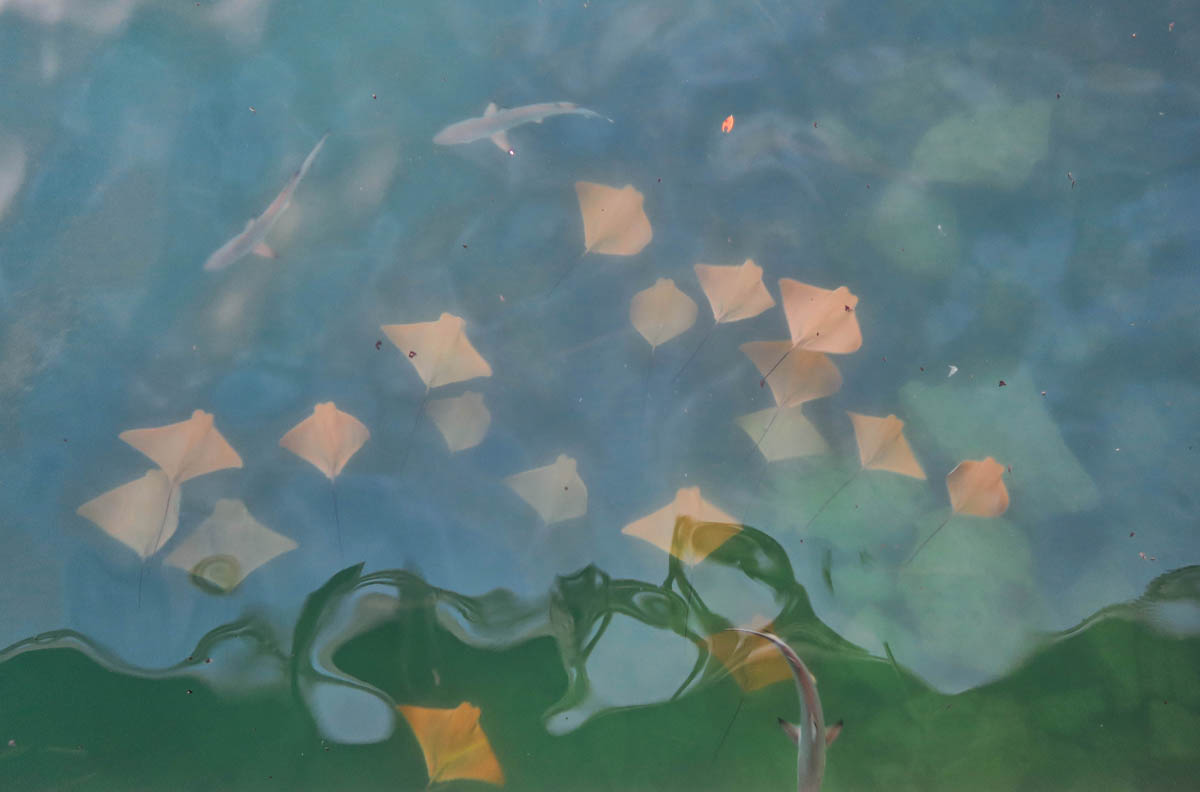 A squadron of rays swims beneath the dock, accompanied by a few black tip sharks.

The majority of ships in the Galapagos Islands cruise through the night to allow maximum daylight for shore-time activities. After our nightly briefing from Fabian outlining the next days activities, followed by dinner of Pepper Steak with a wide assortment of salads and vegetables, we set sail in the dark of night bound for Floreana Island. 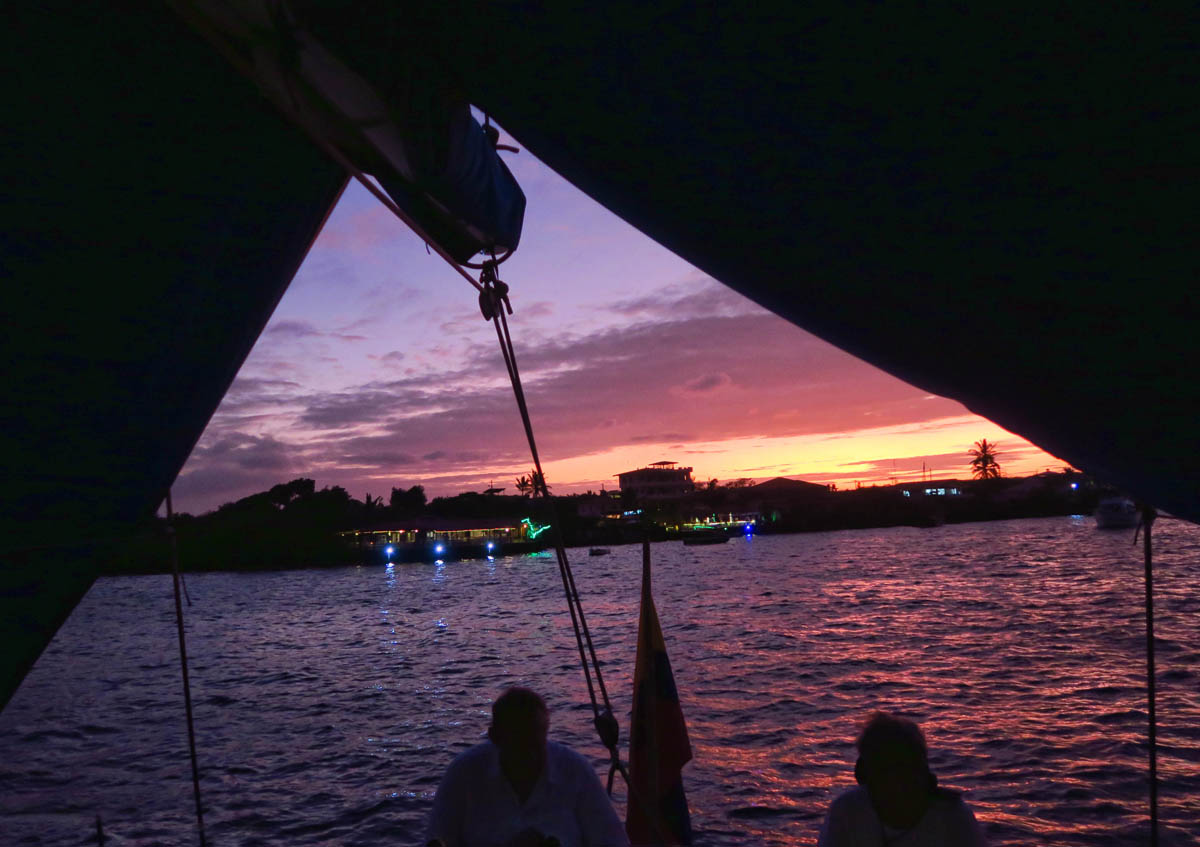 Nothing beats a sunset on a sailboat. 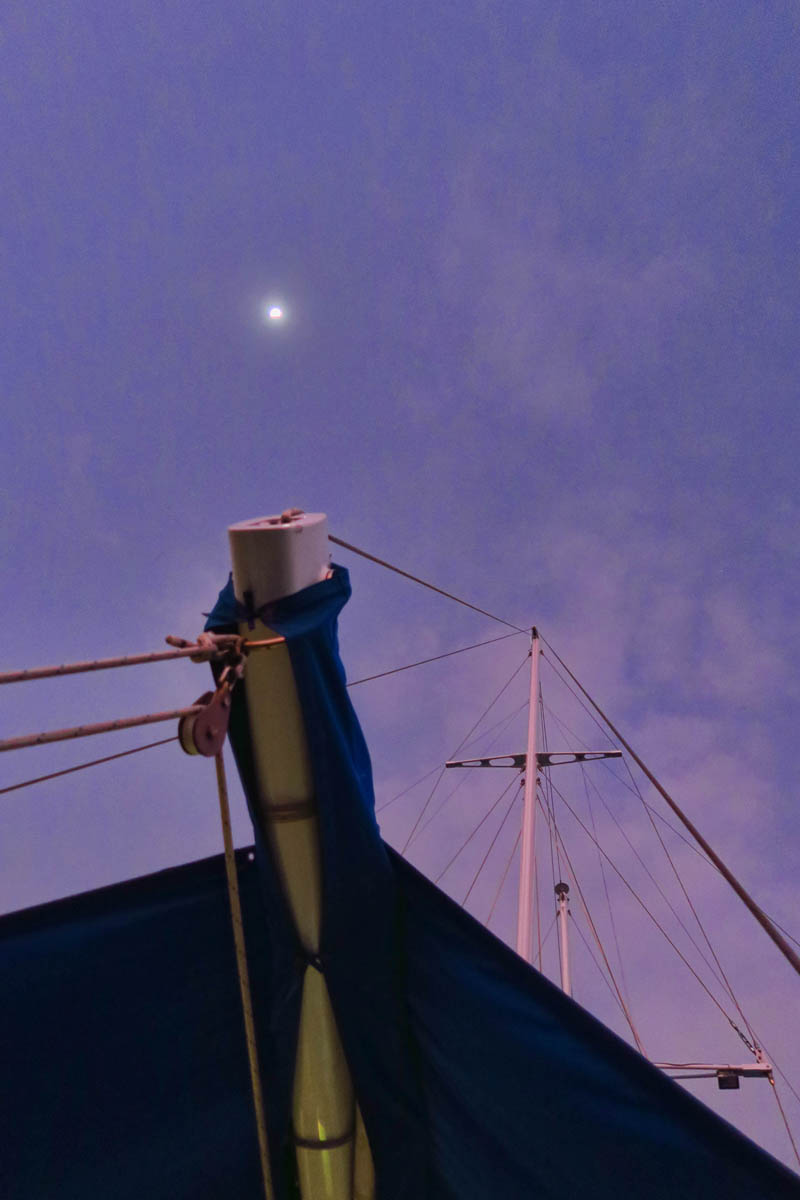 Plus, we had the added bonus of a waxing moon which would reach full stage by the end of our tour.

“It is not the strongest of the species that survives, nor the most intelligent, but the one most responsive to change.” ~ Charles Darwin (1809 – 1882)

11 thoughts on “Galapagos Islands Day One: Meet The M/S Beagle”