We awake on day five moored to a buoy off the shore of Santa Fe Island in what is billed as “One of the most beautiful coves of all visitor sites in the Galapagos.” And I must admit, the description is not exaggerated. This cove is idyllic, taking every adjective I can think of to describe it…calm, clear, turquoise waters in a secluded cove just beckoning us to jump off the side of the boat for an early morning swim. 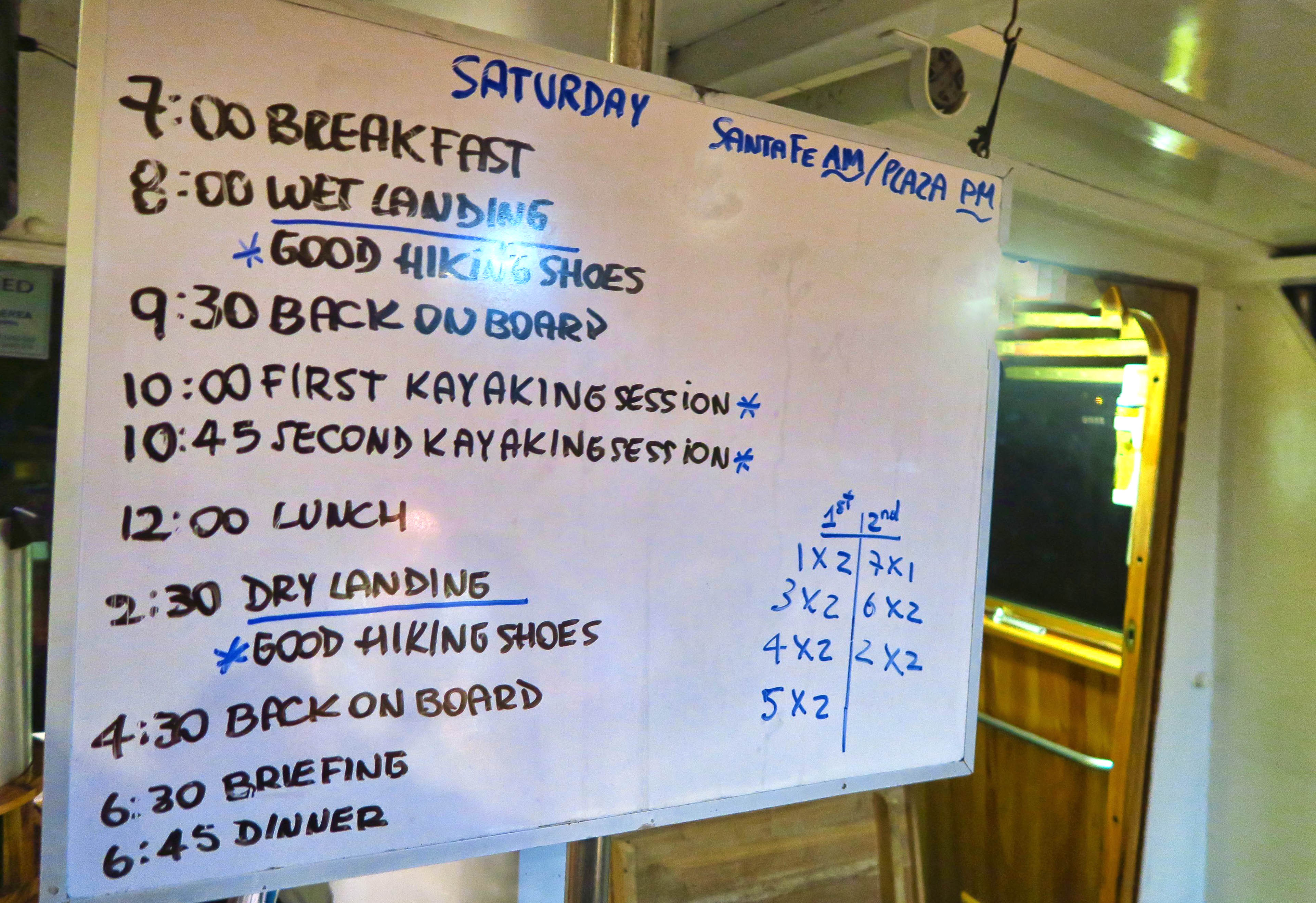 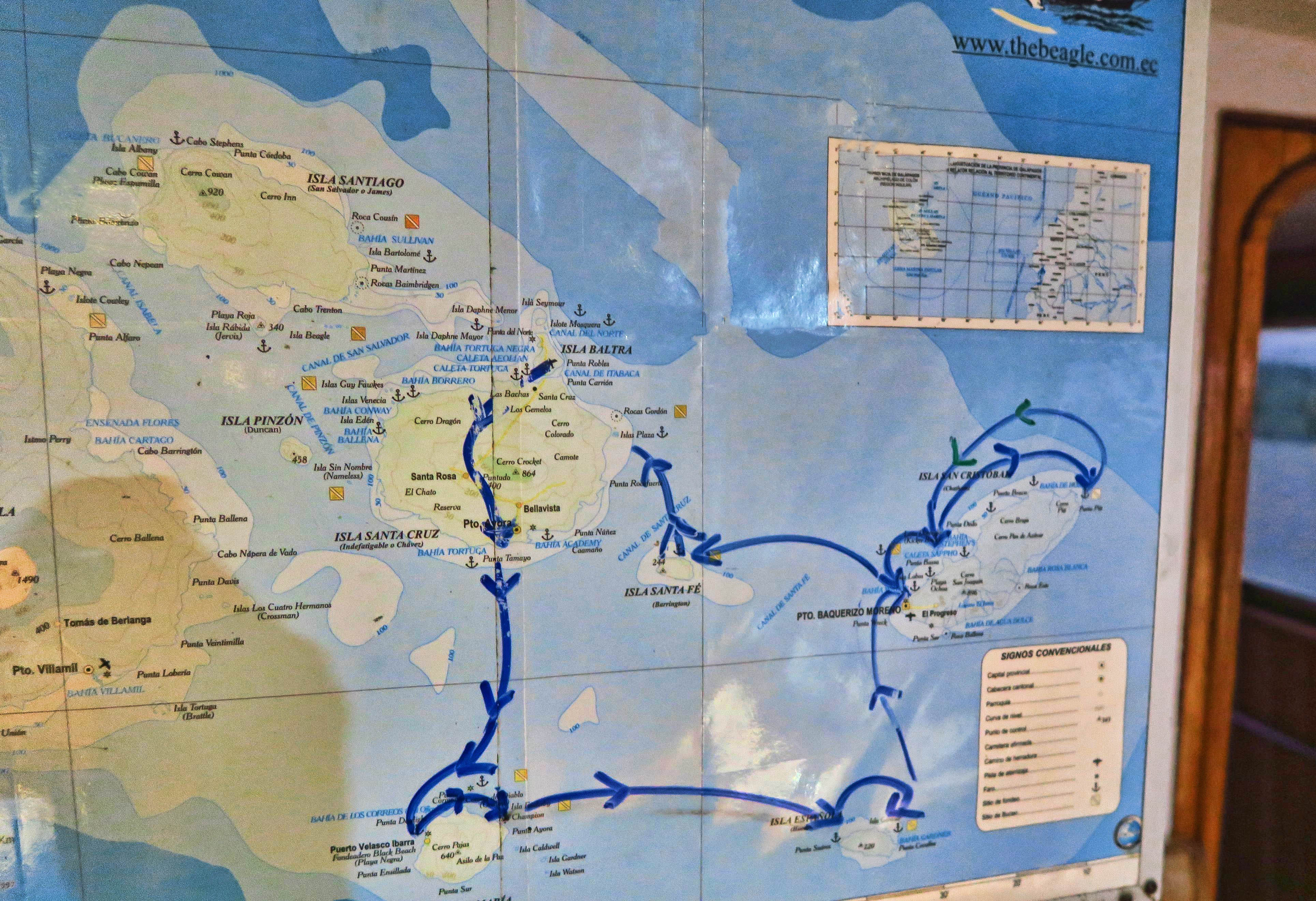 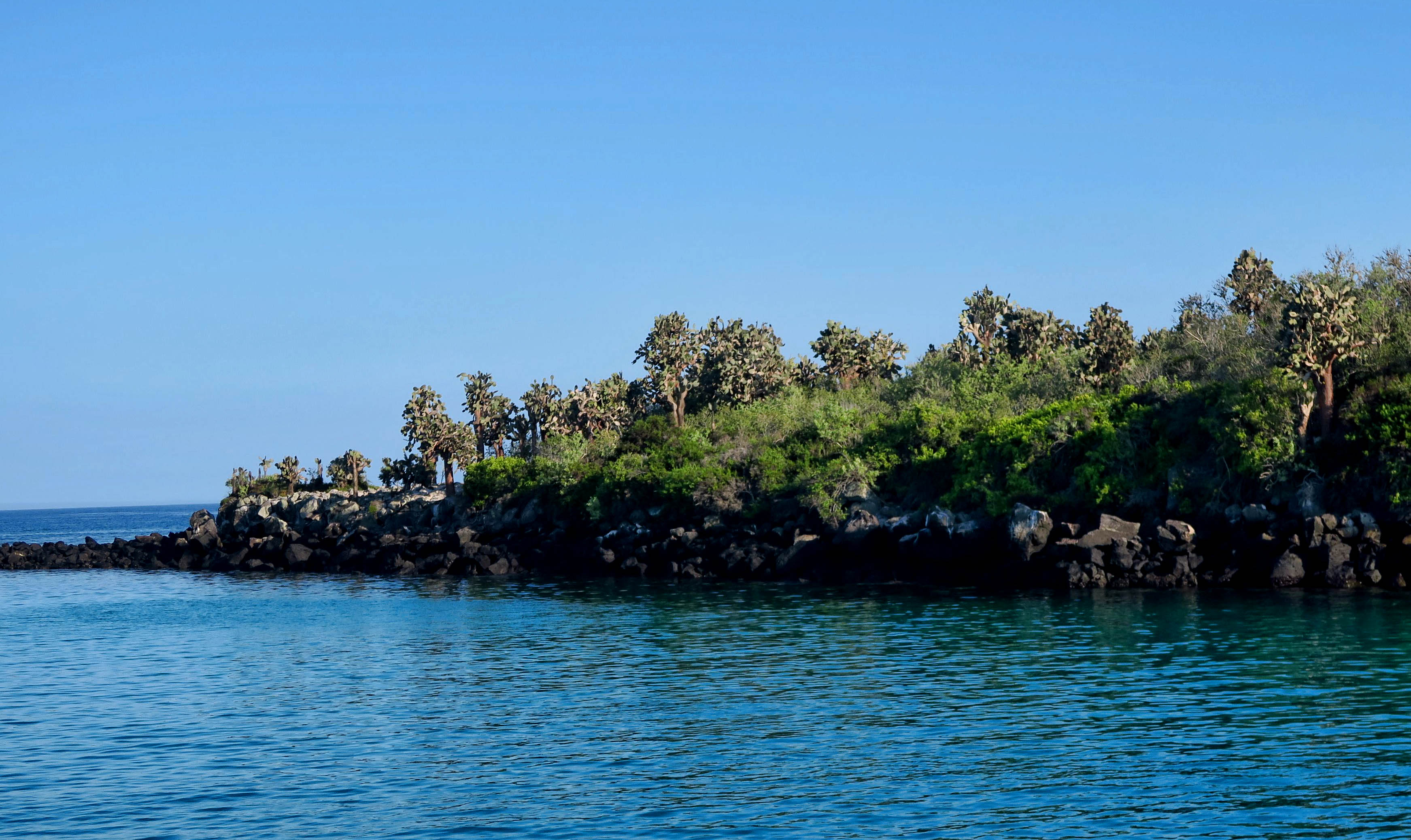 Waking up in this beautiful, calm cove, the first thing I notice are the tall Opuntia cactus trees out on the rocky outcropping. 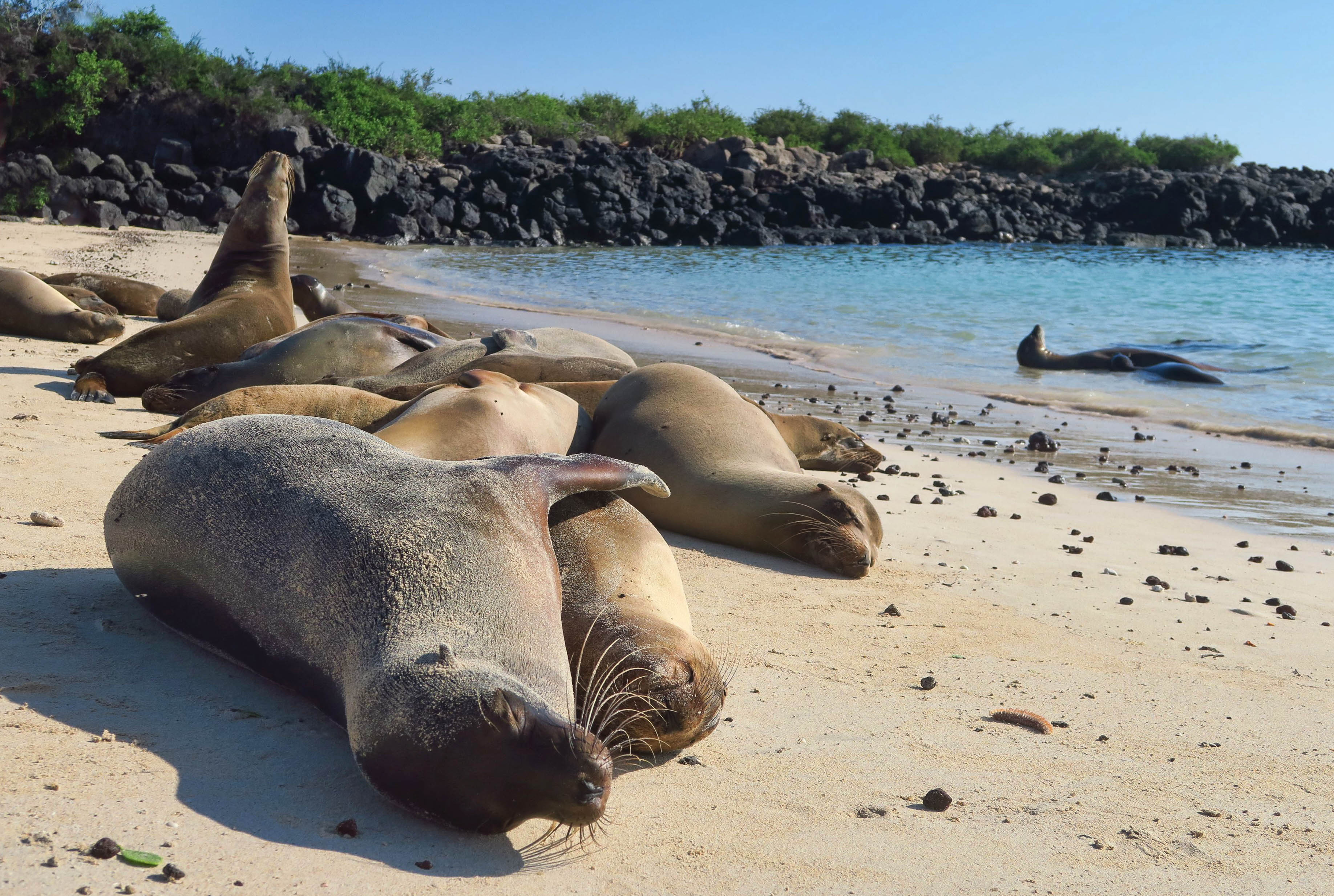 It’s crowded on the beach today…lots of lazy sun worshipers. 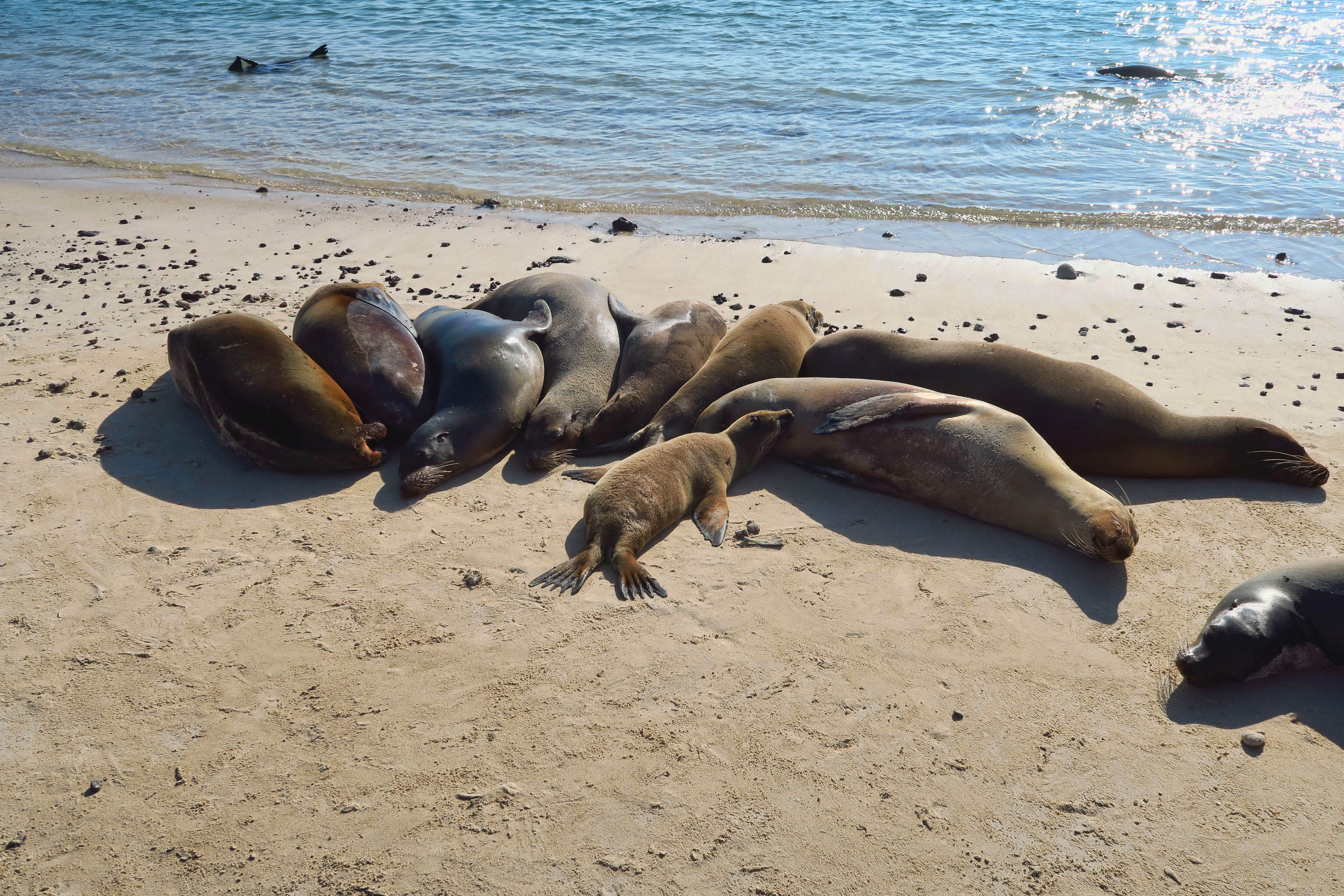 A little nursing pup among the harem. 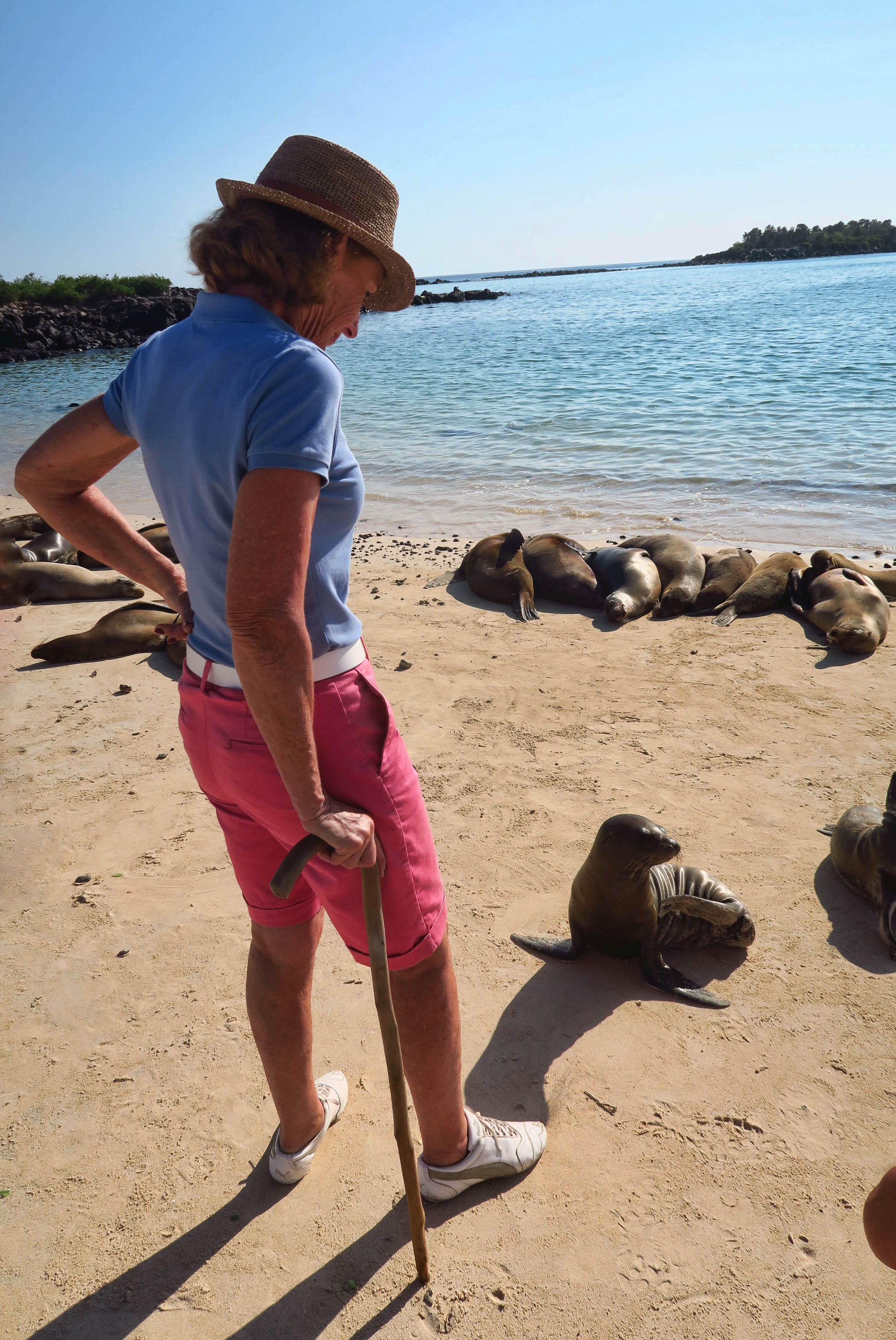 Mariam from the Netherlands is greeted by a curious youngster.

But then Fabian greets us with the news that there will be no swimming in this destination due to some recent aggressive shark behavior! WHAT???  A man snorkeling near sea lions along the shore was bitten on the foot just a year ago, resulting in severed ligaments in his foot. While there have only been seven unprovoked shark attacks in the Galapagos since 1954, this one happened recently, so there will be no swimming or snorkeling in the cove for the foreseeable future until the national park can reassess the situation and determine it to be “safe.”

At first, we all express frustration and thoughts that this rule brought down by the authorities is bogus. Especially me. I have been diving with reef sharks all over the planet…white tips, black tips, nurse sharks, bull sharks, tiger sharks, and hammerheads. Never once have I encountered any kind of aggressive behavior. We all joke about “accidentally” falling overboard so we can go for a swim.  Let us swim at our own risk!  Though it’s early morning, it’s already heating up, and looking down into that cool, clear refreshing water is pure torture.

But then, we see them…the dark, sinister shadows of a couple of large…very large…sharks swimming beneath the boat as if they are pacing like hungry stray dogs under the picnic table. We all run around the railing, side to side, following their every move.  Okay, well, maybe it wasn’t BS after all. 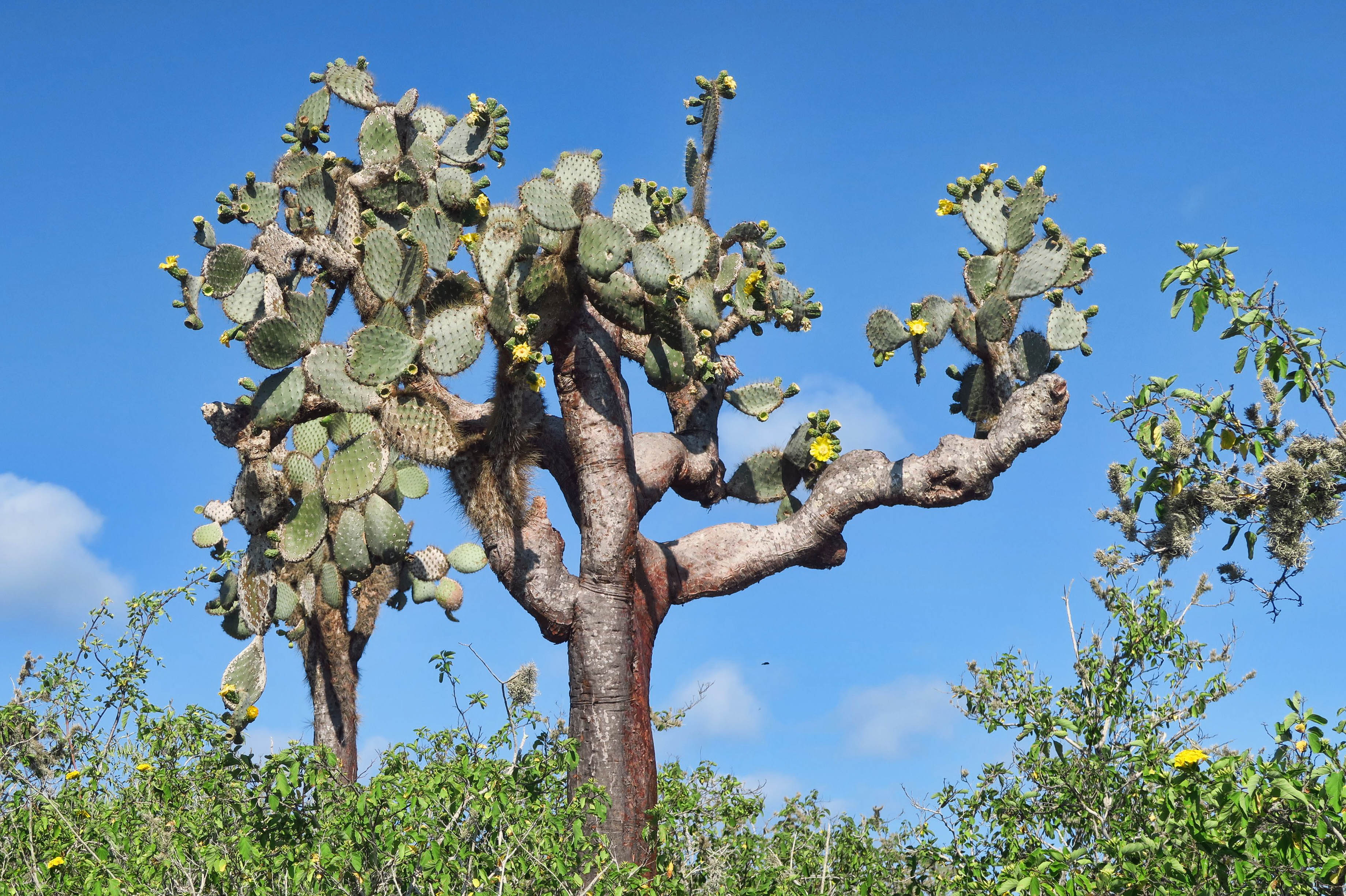 Some of the opuntia cactus are blooming with beautiful yellow blossoms. 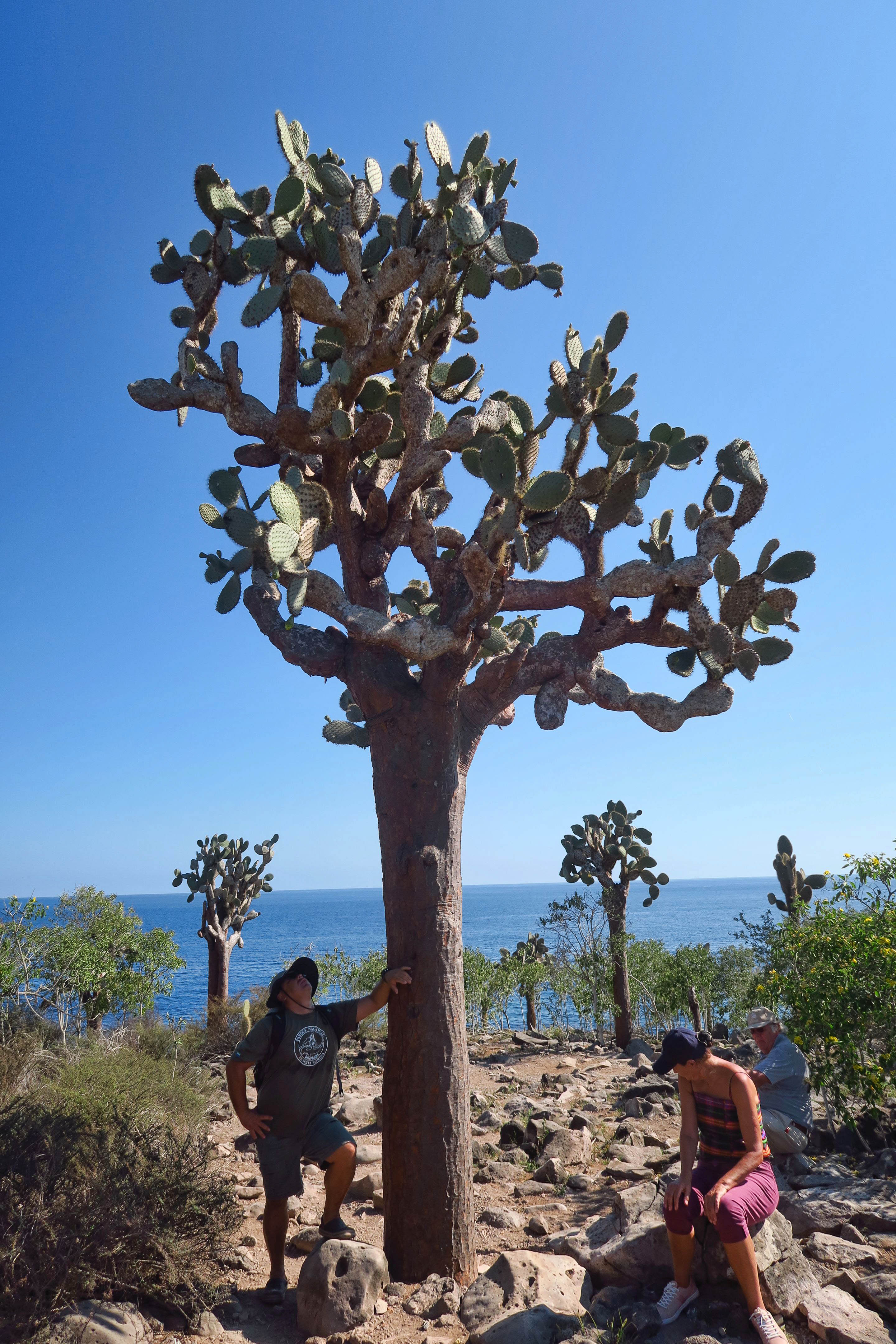 Fabian and Ingrid give some size perspective of just how tall these cactus trees can get. 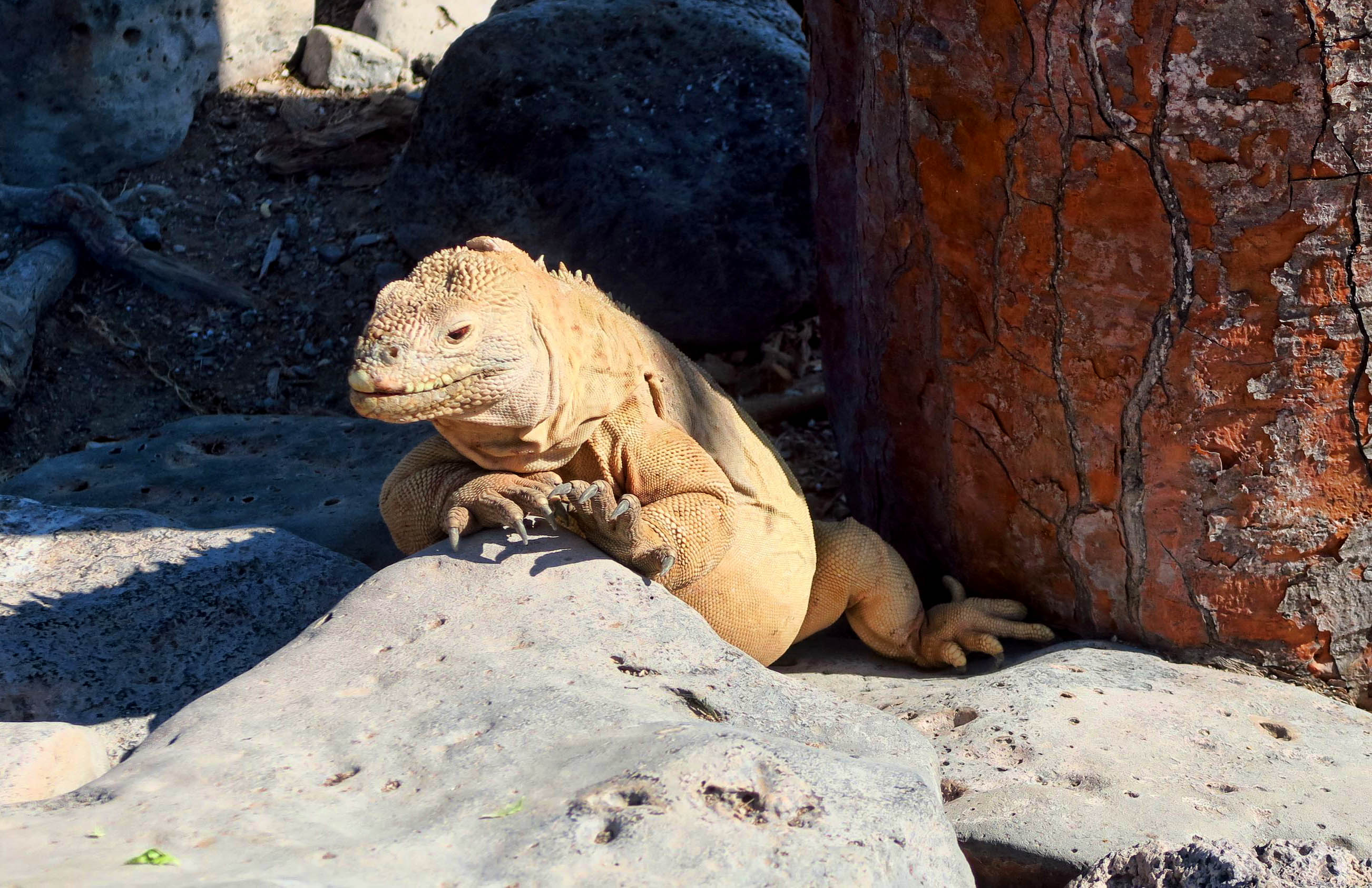 While photographing the cactus trees, I spy a land iguana peeking out from the shade. 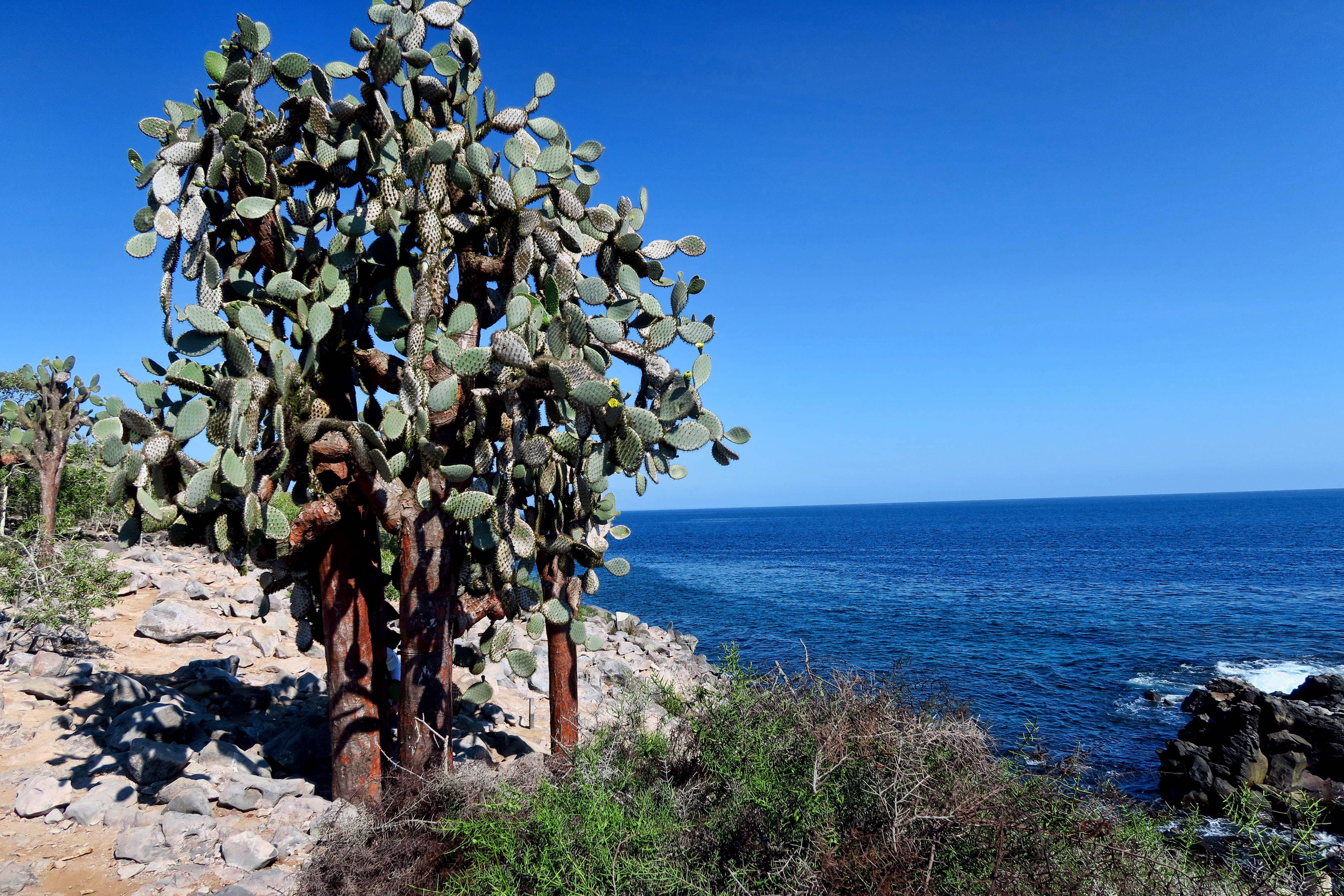 The opuntia cactus is a primary food source for land iguanas. 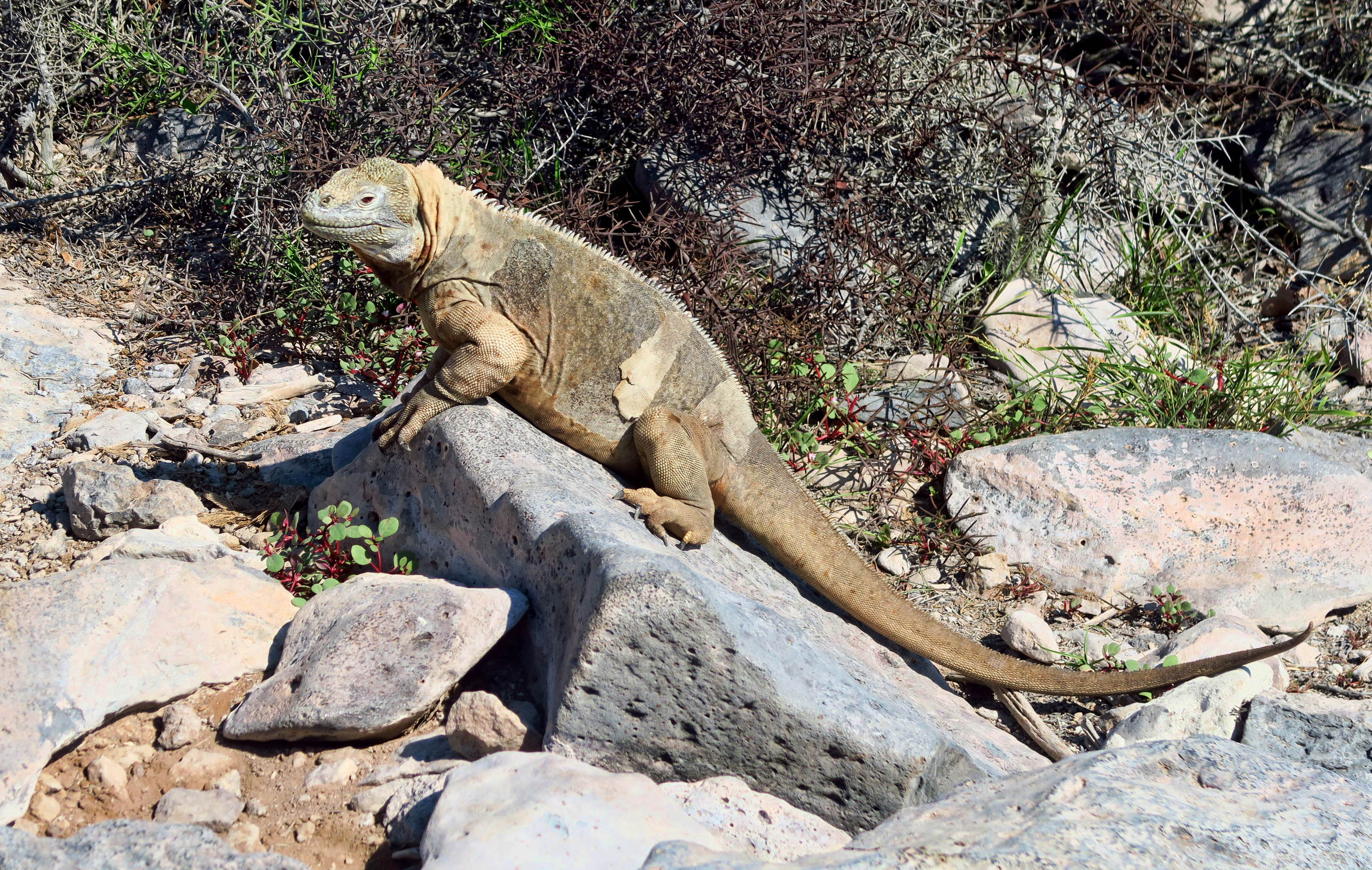 Finally, he decides to come out in the sun and pose for me.

But the good news is, we get to kayak here! I guess the sharks don’t have an appetite for peeling the tough plastic skin off big yellow banana-looking kayaks to get to the flesh inside.

But first, we go for a morning hike along the peninsula that surrounds the cove to see some of the largest specimens of the giant Galapagos Opuntia cactus. This particular species of the prickly pear cactus is endemic to the islands, and can grow up to 36 ft, like trees. The cacti are a food source for tortoises, land iguanas, and many birds, particularly the Galapagos finches. It’s a symbiotic relationship necessary for survival whereby the finches eat the cactus flowers, fruits and seeds, and obtain water from pads, and in turn distribute the seeds across the Islands.

Santa Fe has been in a battle for eradication of invasive species that threaten these giant cacti. Efforts have addressed, first and foremost, goats who fed on the cactus, then rats, and even fire ants. 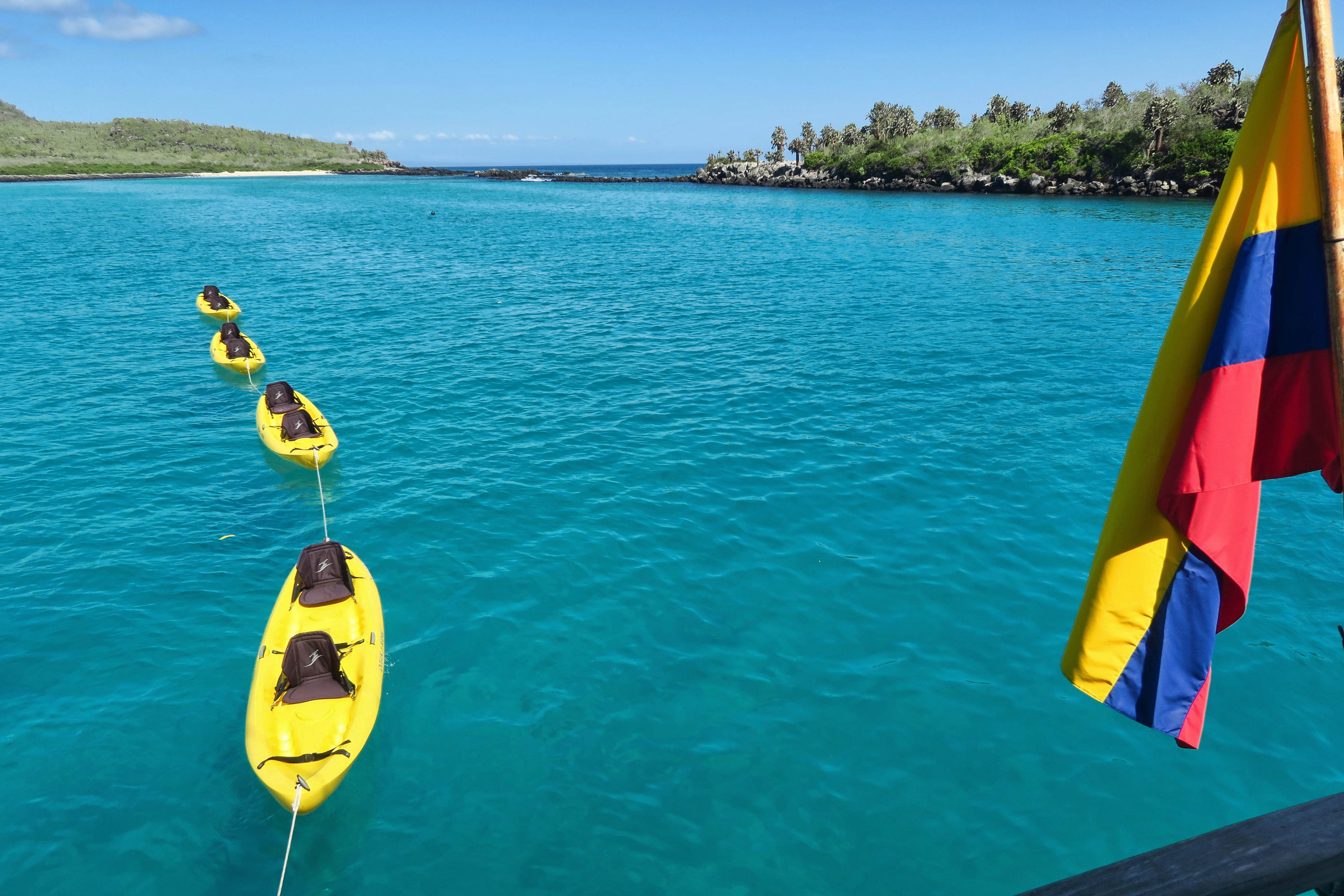 While we are on our morning hike, the crew launches the kayaks and puts in comfy seats so they are ready for us when we return. 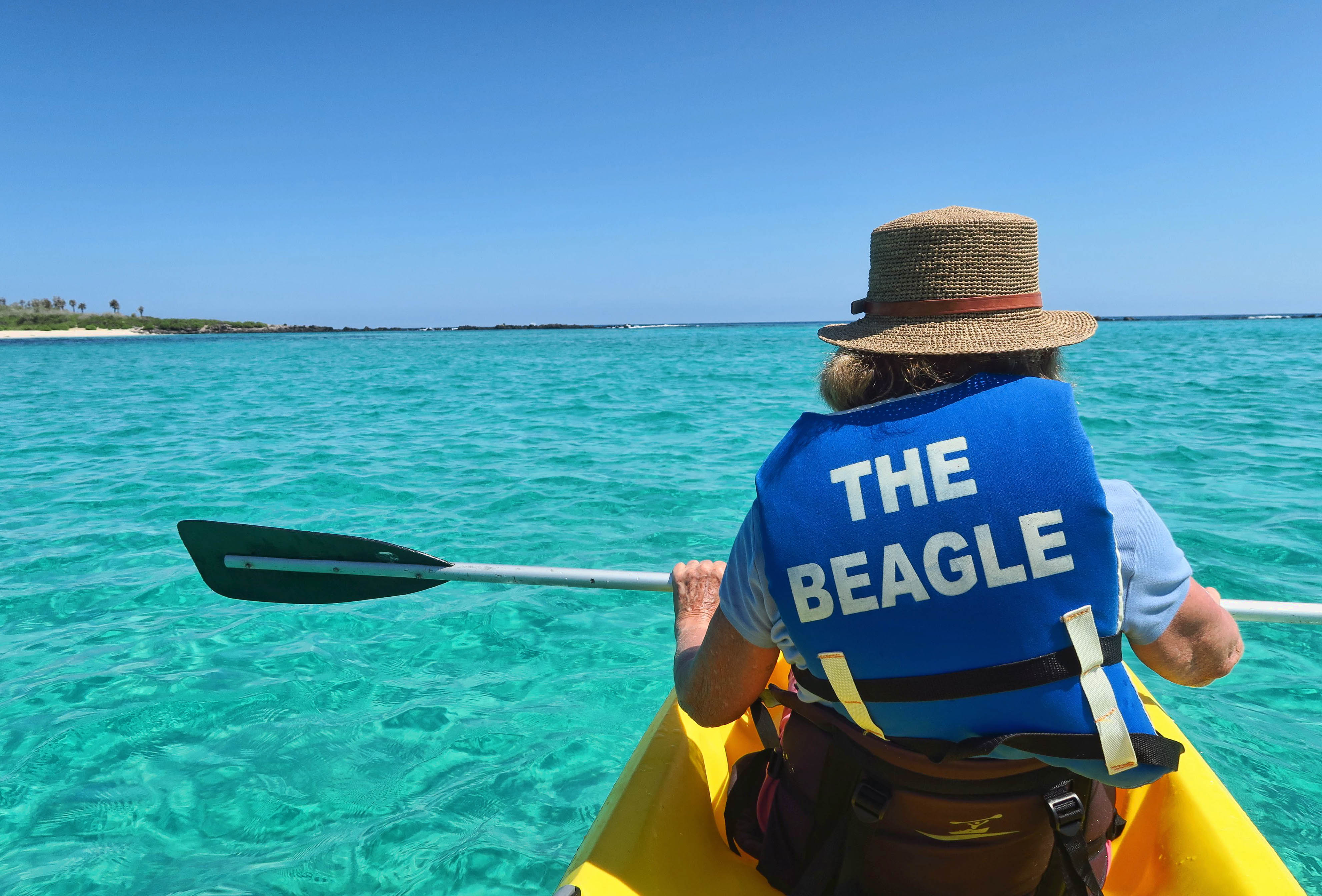 Marian is my paddling partner. She has lots of paddling experience, making for an easy time on the water. 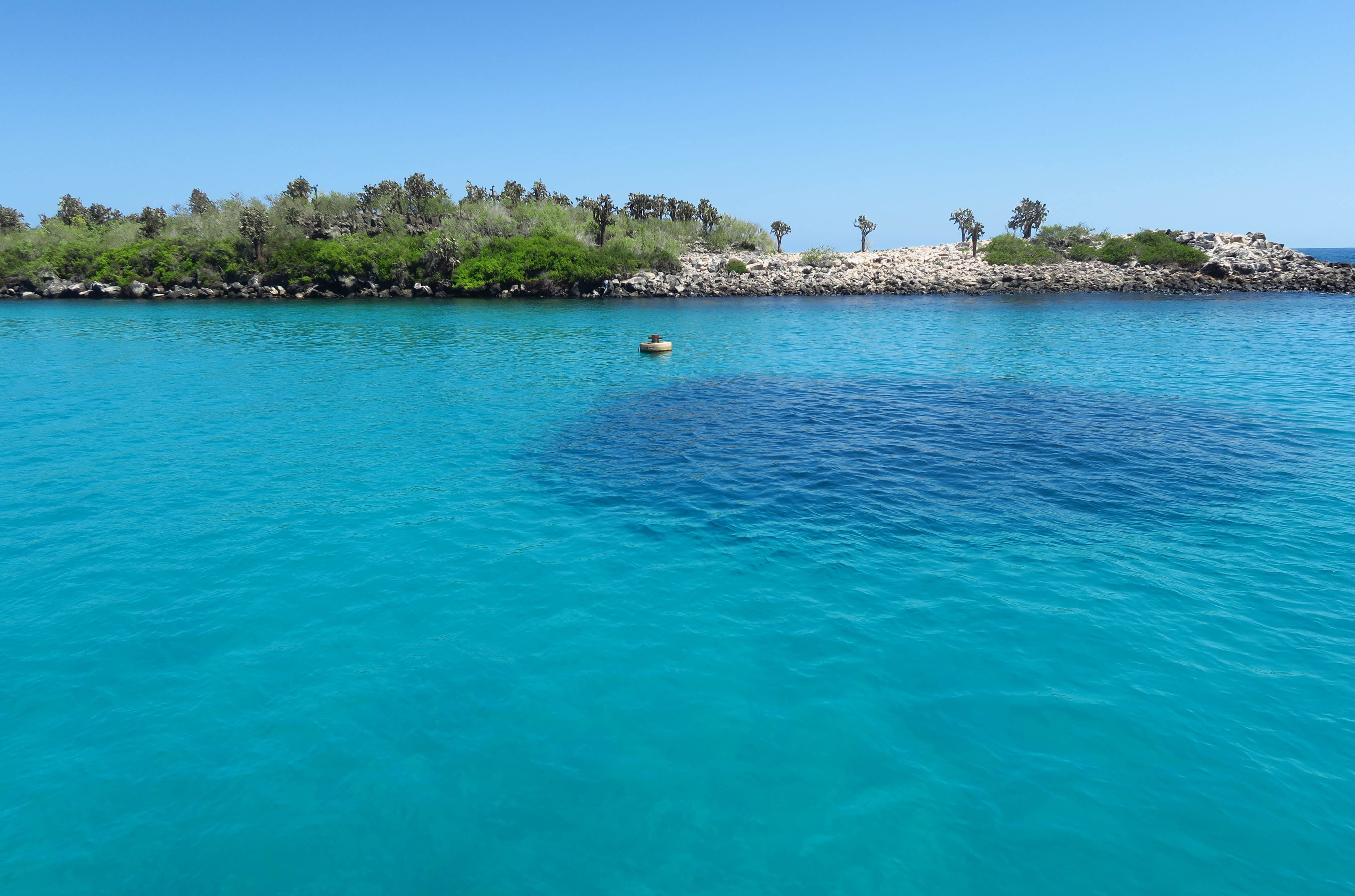 Hard to believe, but this dark shadow beneath the surface is a school of salemas. It’s interesting watching them move as a group. Wonder where the hungry sharks are now?

As the week has progressed, we’ve lost our cloud cover. This is great news for sunlit photography, star gazing in the evenings, and watching the near-full moon rise. But bad news for hiking, as this is our hottest day yet. We cannot wait for the kayak session! The Beagle has four sit-on-top kayaks, so we will be divided up into two groups for one hour kayak sessions.

While the kayaking is enjoyable enough, it’s really the splashing and dousing that everyone seems to enjoy even more on this hot day. I have to laugh at the thought of the shenanigans that would have gone on here had we not been warned of “aggressive shark activity.”

After lunch, we motor over to South Plaza Island off the east coast of Santa Cruz. This is the smallest island in the archipelago that has a visitor site. While underway, we are joined by a pod of dolphins that swim along to play for quite a long while. 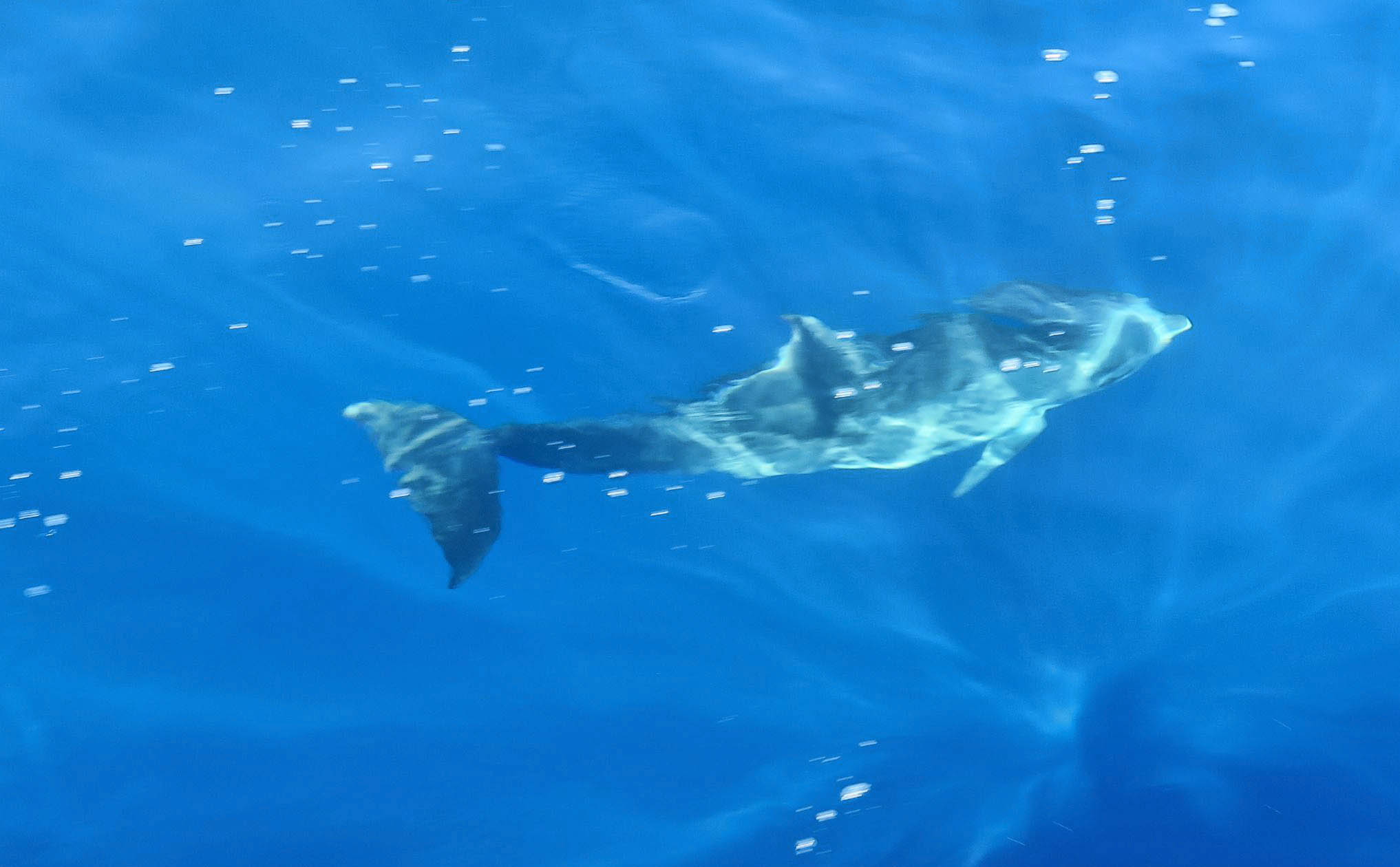 First one, then many. 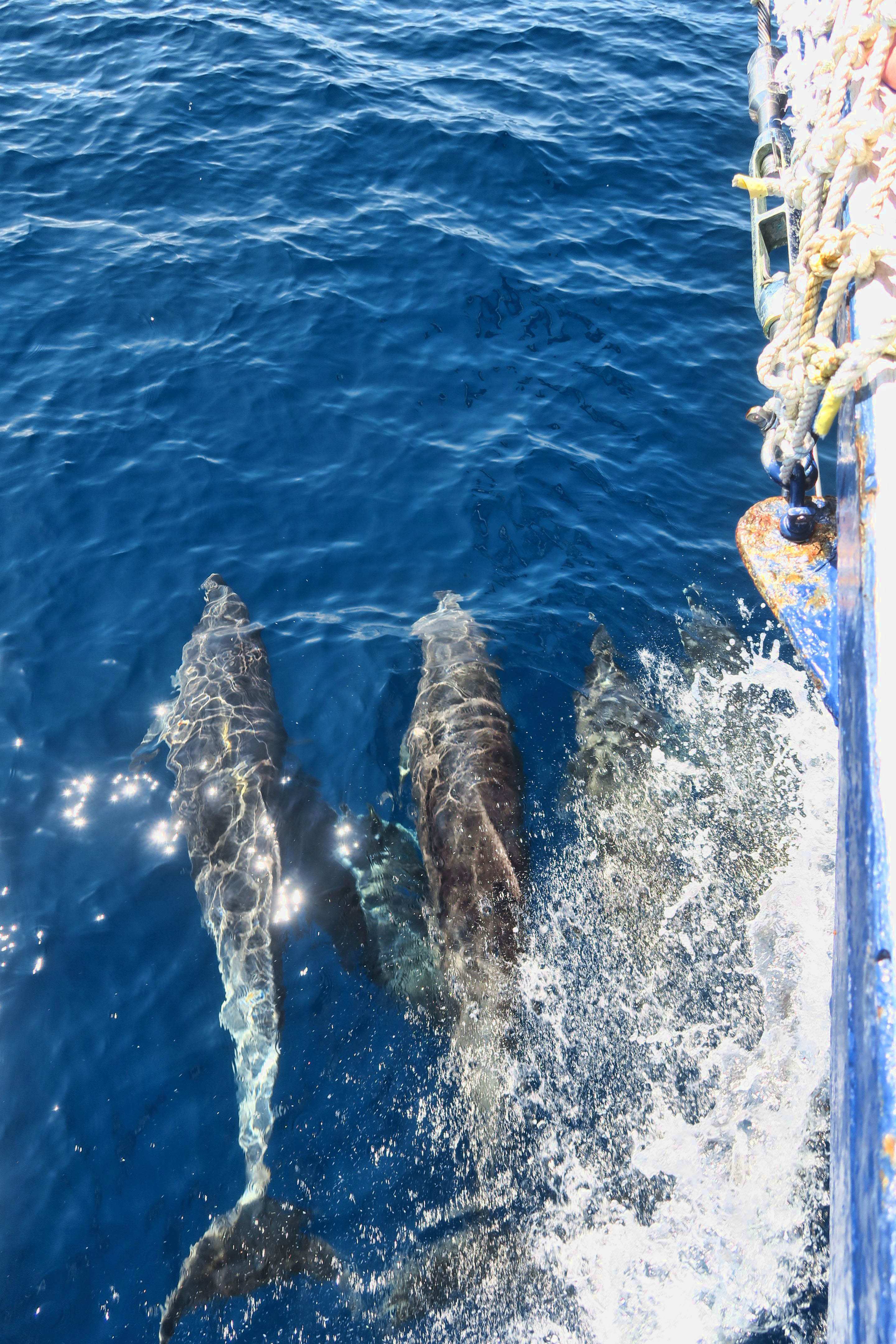 We all hang over the railing encouraging them to play along. 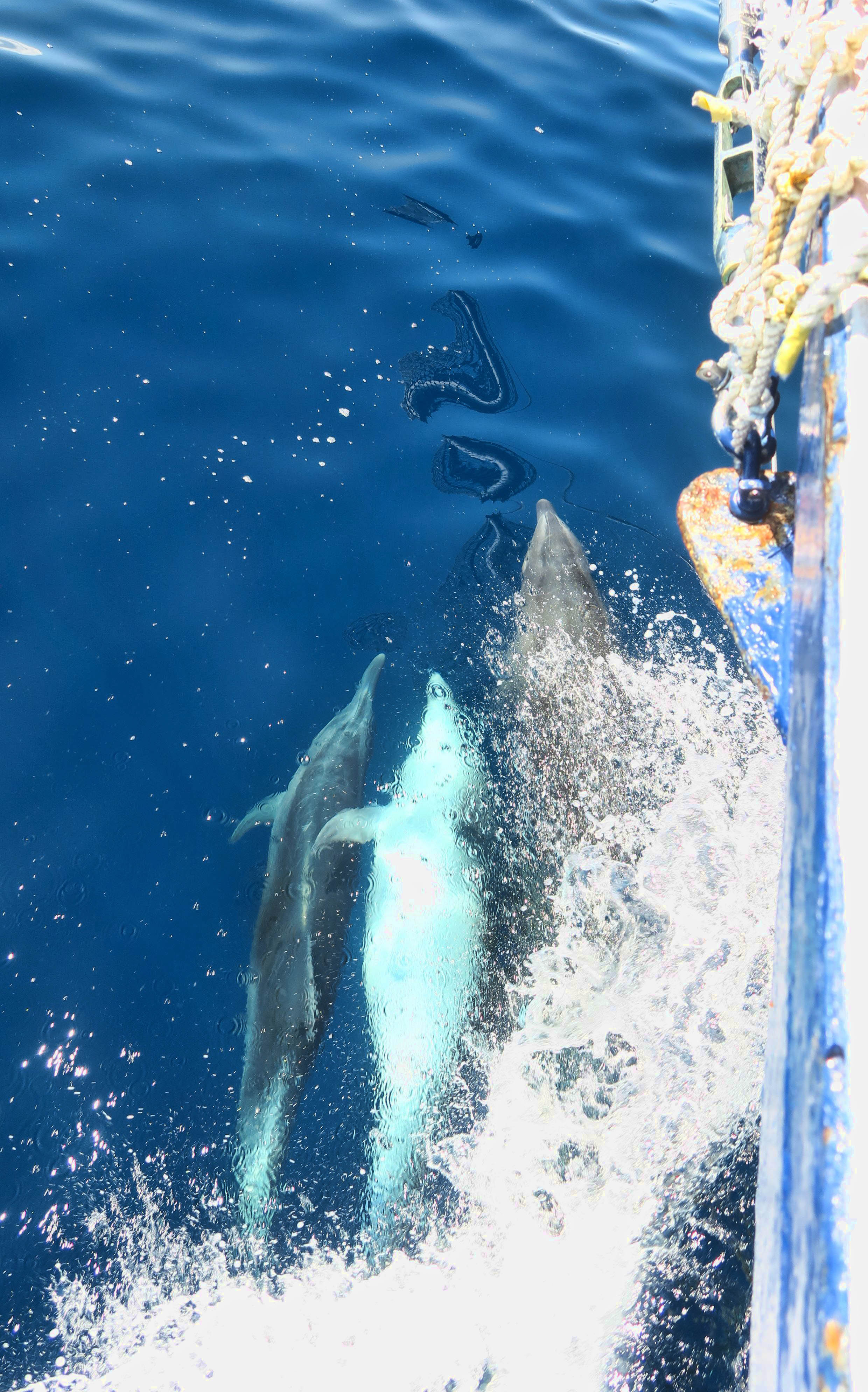 They leap, twirl, and spin in our bow wake.

Our afternoon hike on South Plaza Island is primarily to see the swallow-tailed gull. I only recently learned from my dear bird enthusiast cousin Karen that there is no such thing as a “sea gull,” anymore than there is a “land dog.” They are all seabirds, so the name “sea” is superfluous. They are just “gulls.” And there are over 50 different types of them. But what makes the swallow-tailed gull unique is that it is the only nocturnal seabird in the world. It’s got night vision! The bright red ring around its eye that appears during breeding season gives it an eerie look.  They nest on the rocky ledges just above the water, and fish at night. 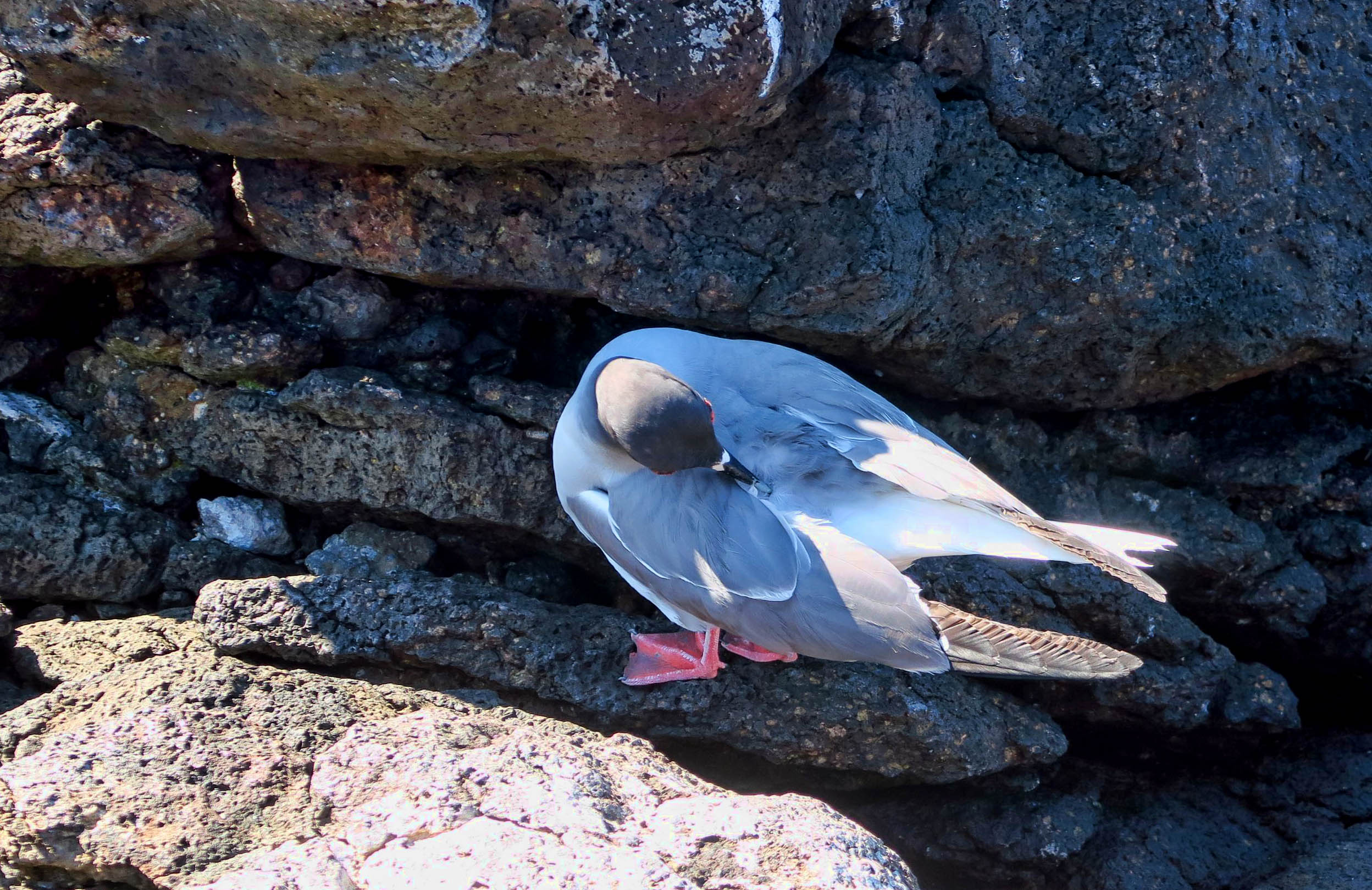 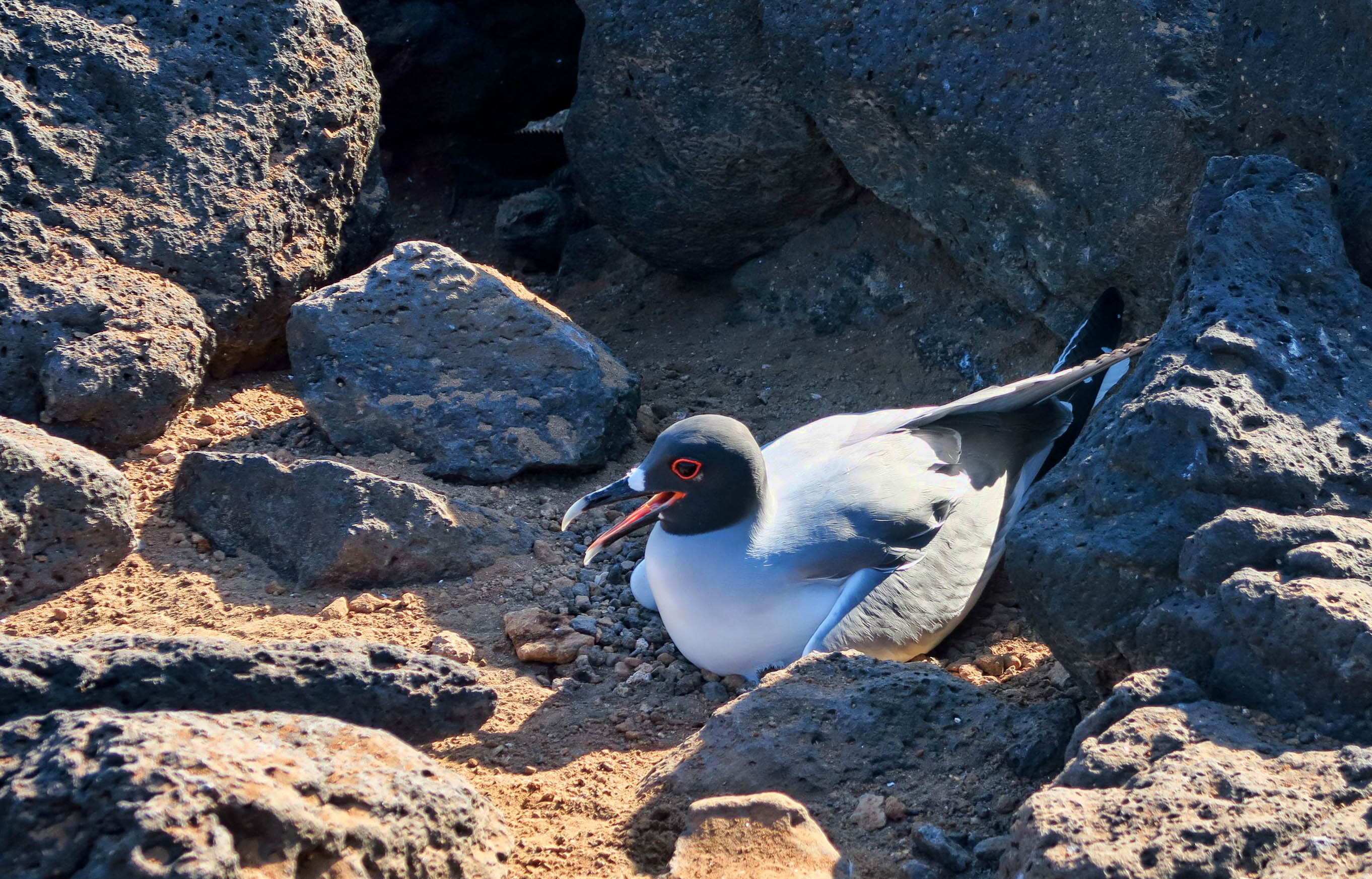 The red ring around their large eyes gives an eerie look to them. 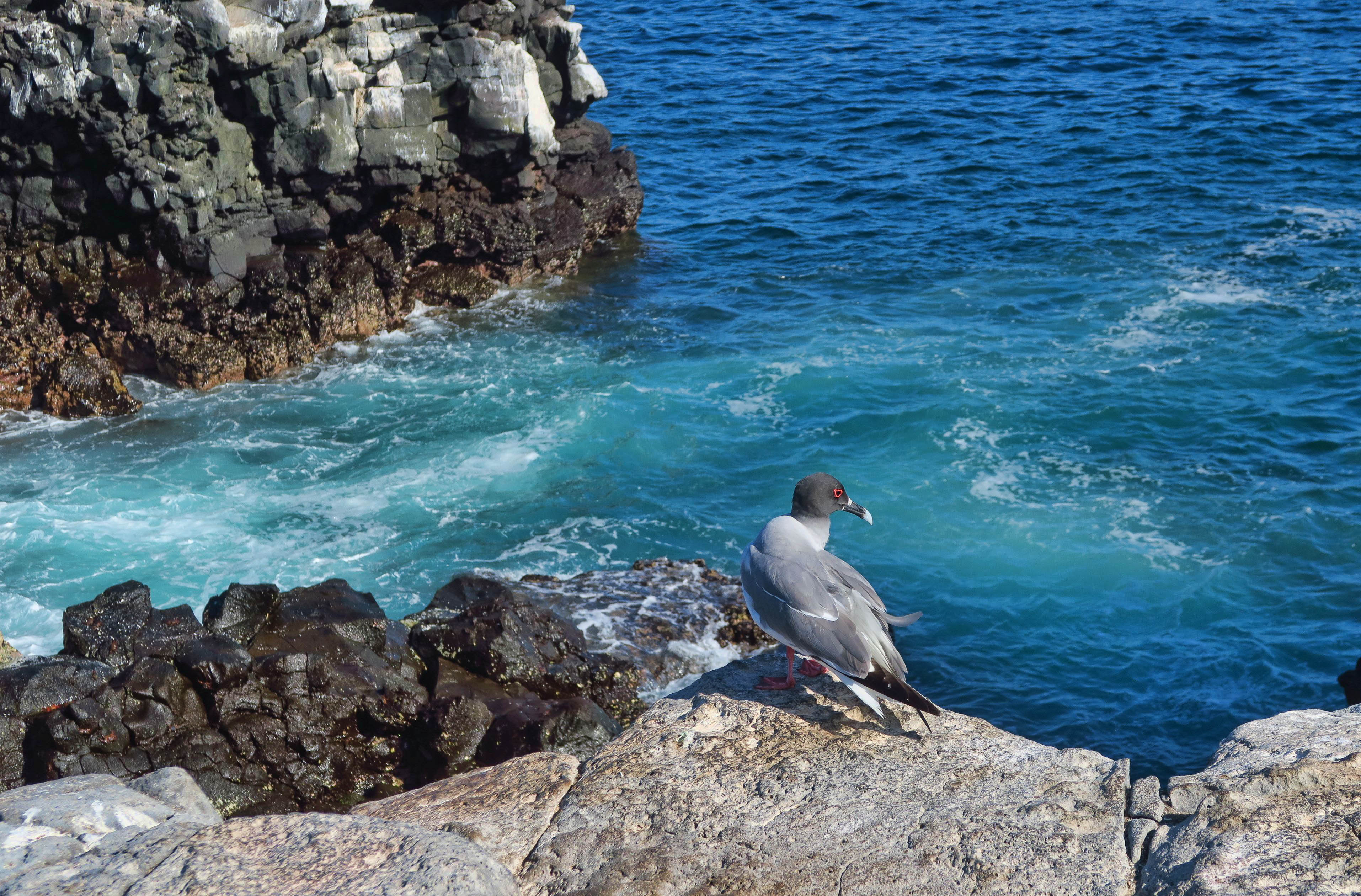 While they are “up” during the day, they only feed at night. 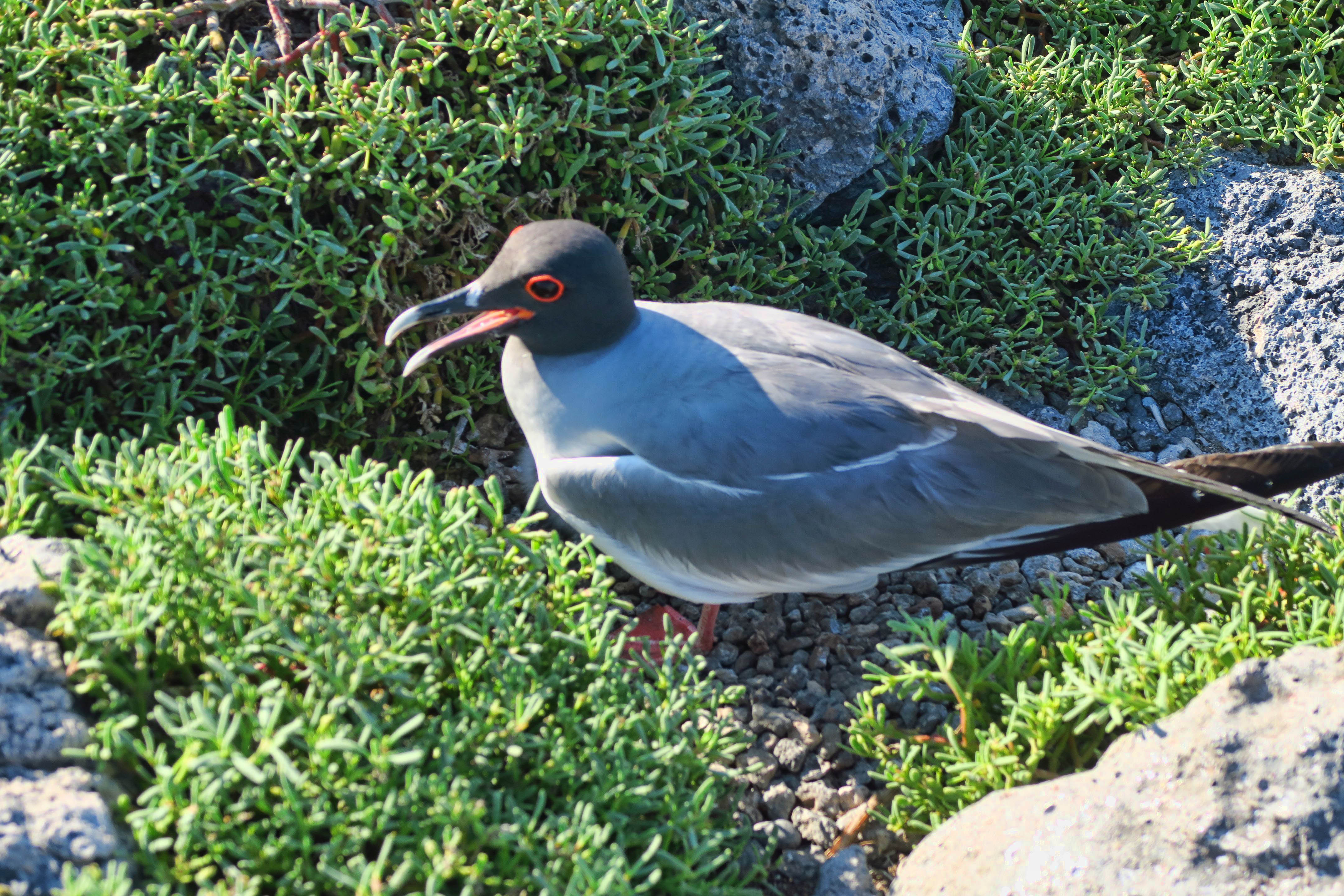 Once breeding season is past, they will become “pelagic” staying at sea until time to breed again.

It’s a lovely late afternoon hike through what had to be stunning red carpet weed a couple of months ago, now turned a dull green. It’s hot but we are hiking a ridge, so the ocean cross breeze makes for a pleasant walk. 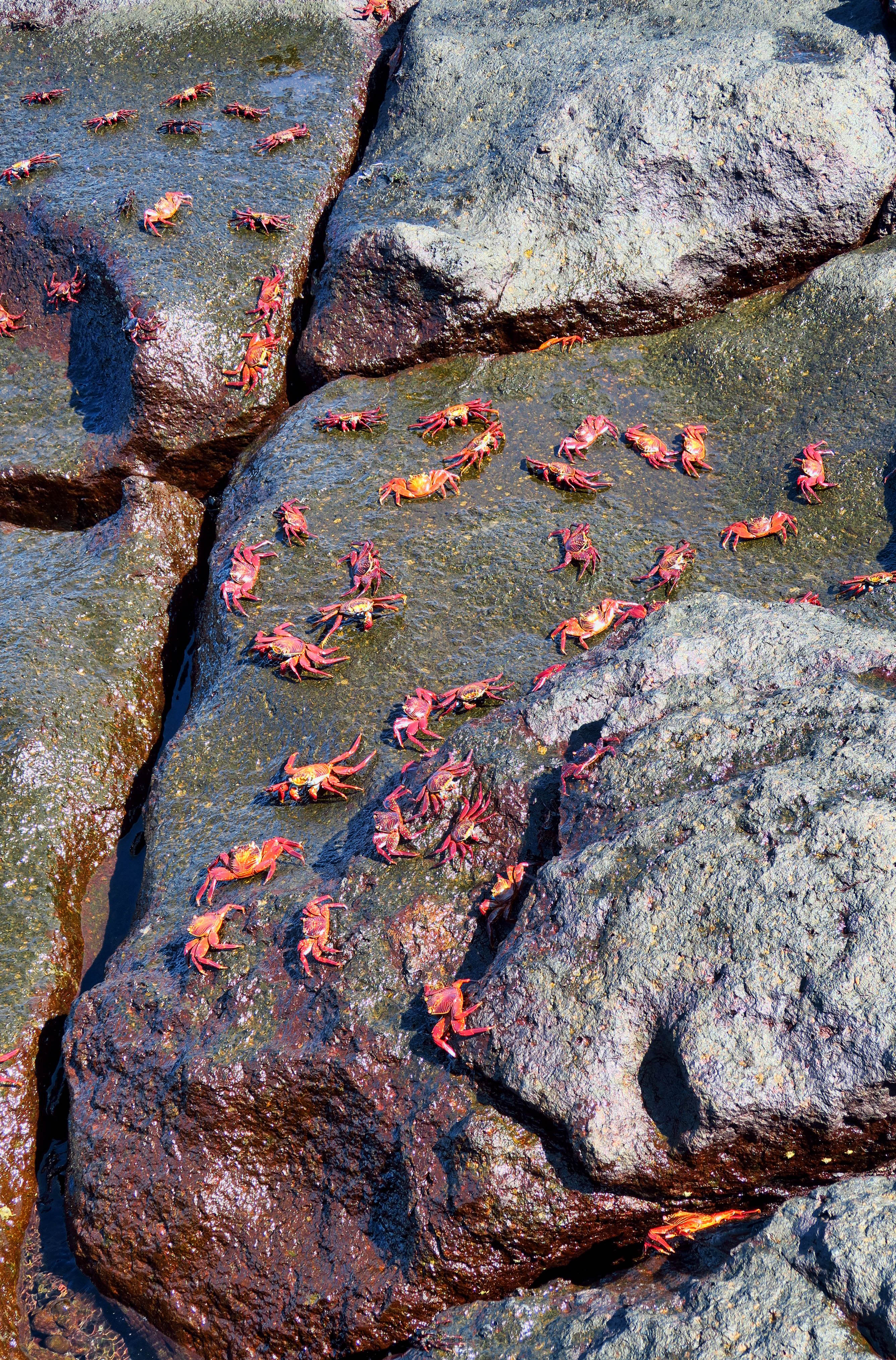 Lots of Sally Lightfoot Crabs hanging out on the rocks here. 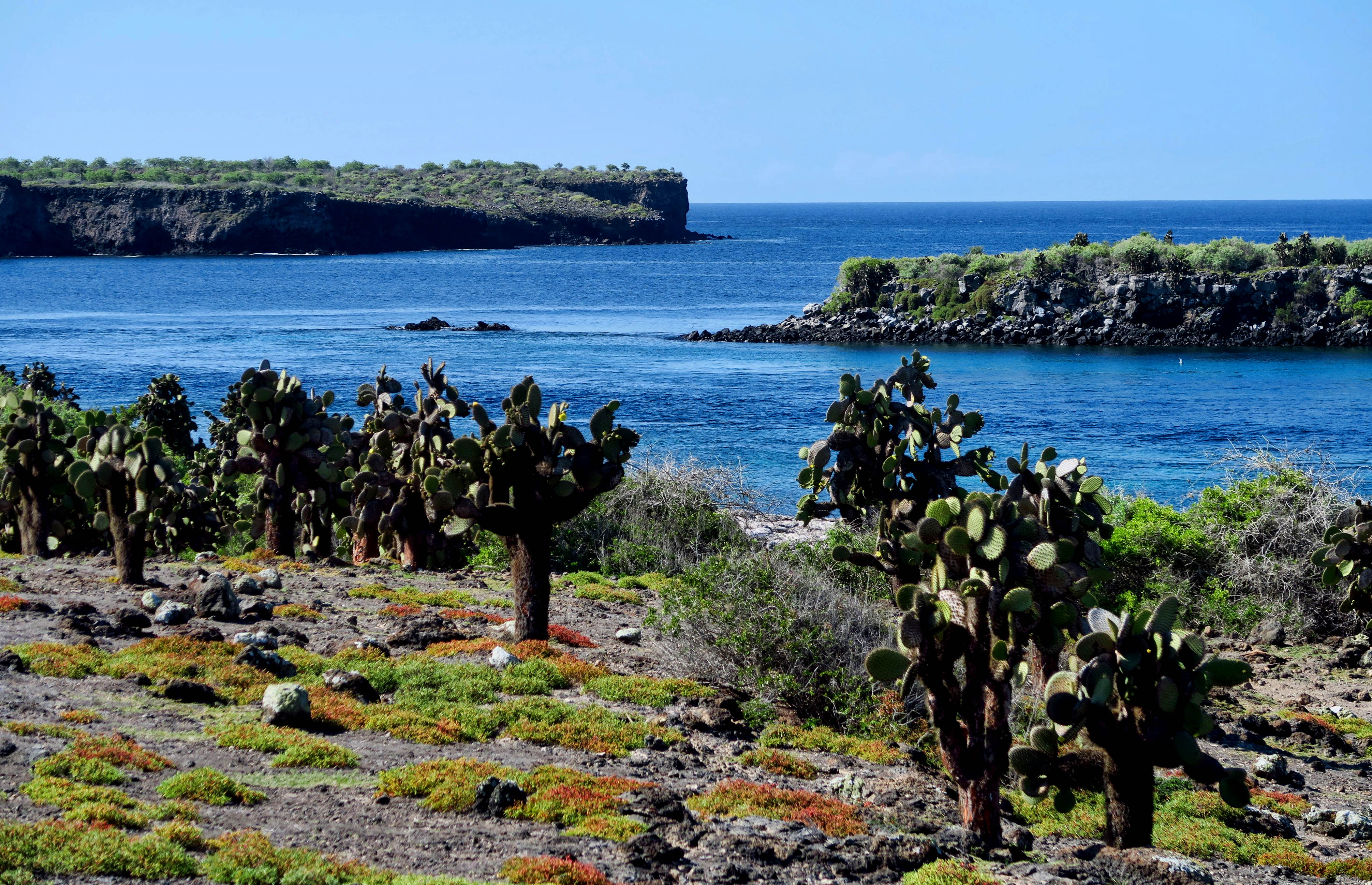 Looking out over the Opuntia cactus at the beautiful cove. 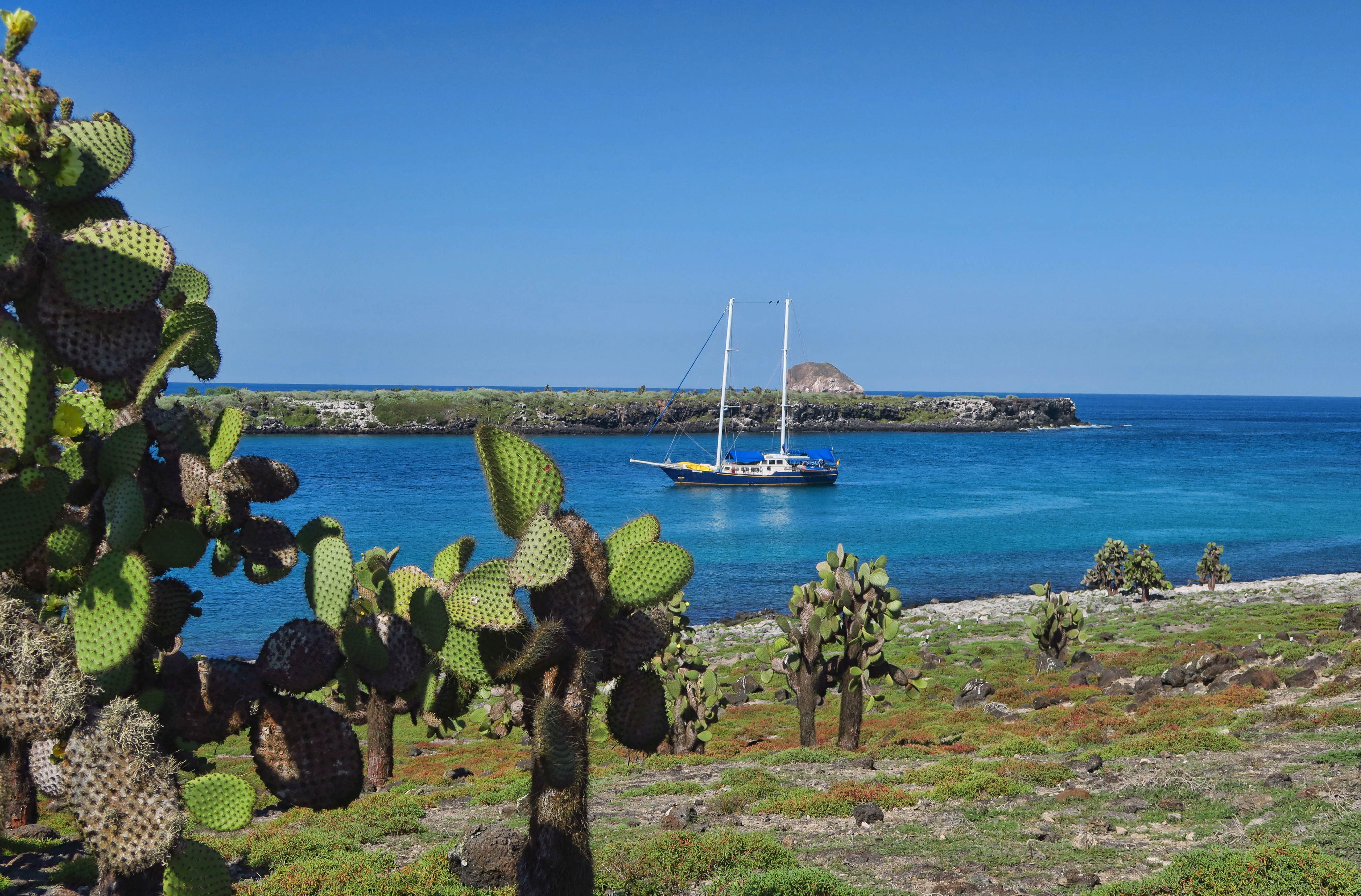 Another treasured moment when the Beagle is the only boat in view. 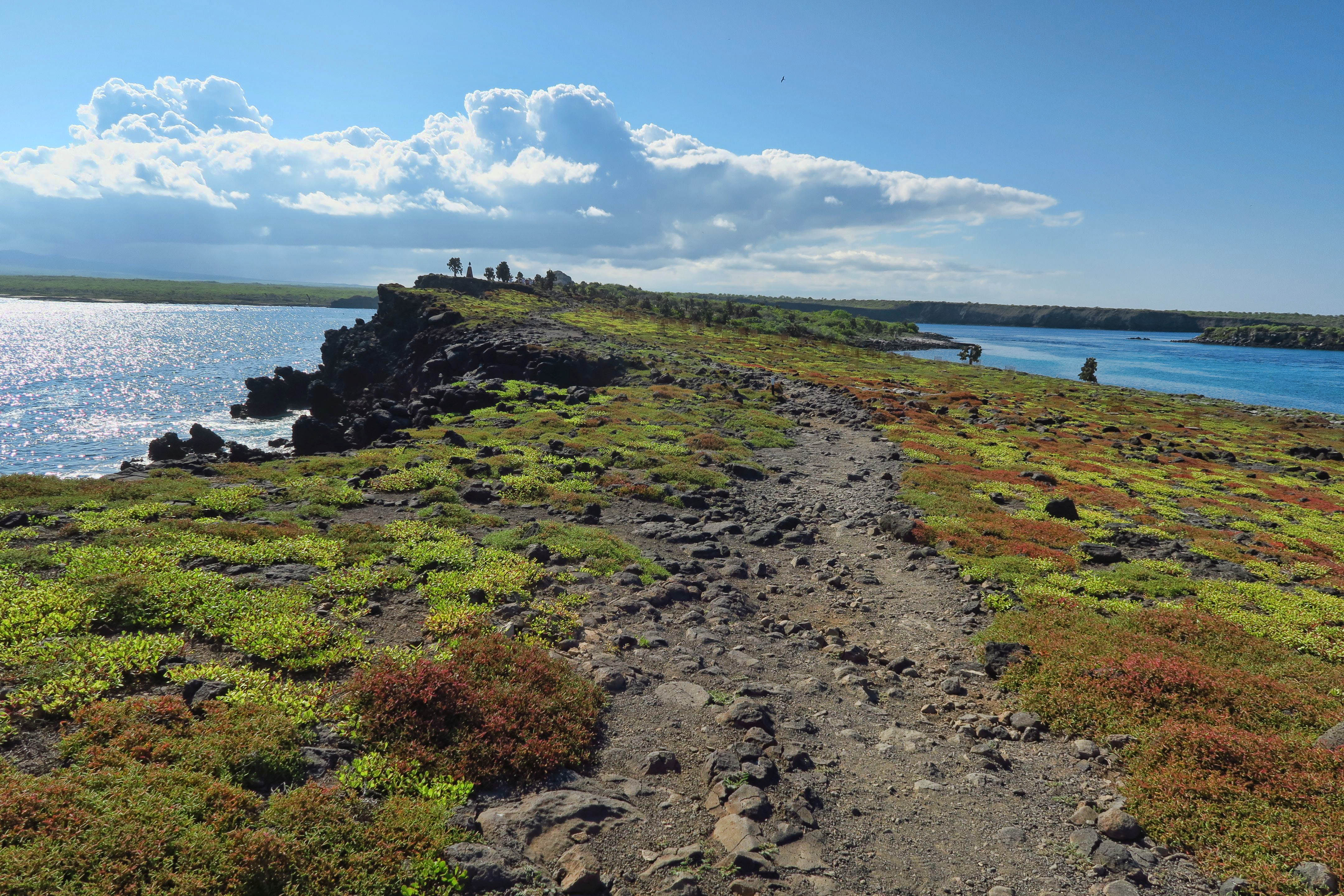 The Galapagos Islands version of a “ridge-line” hike. 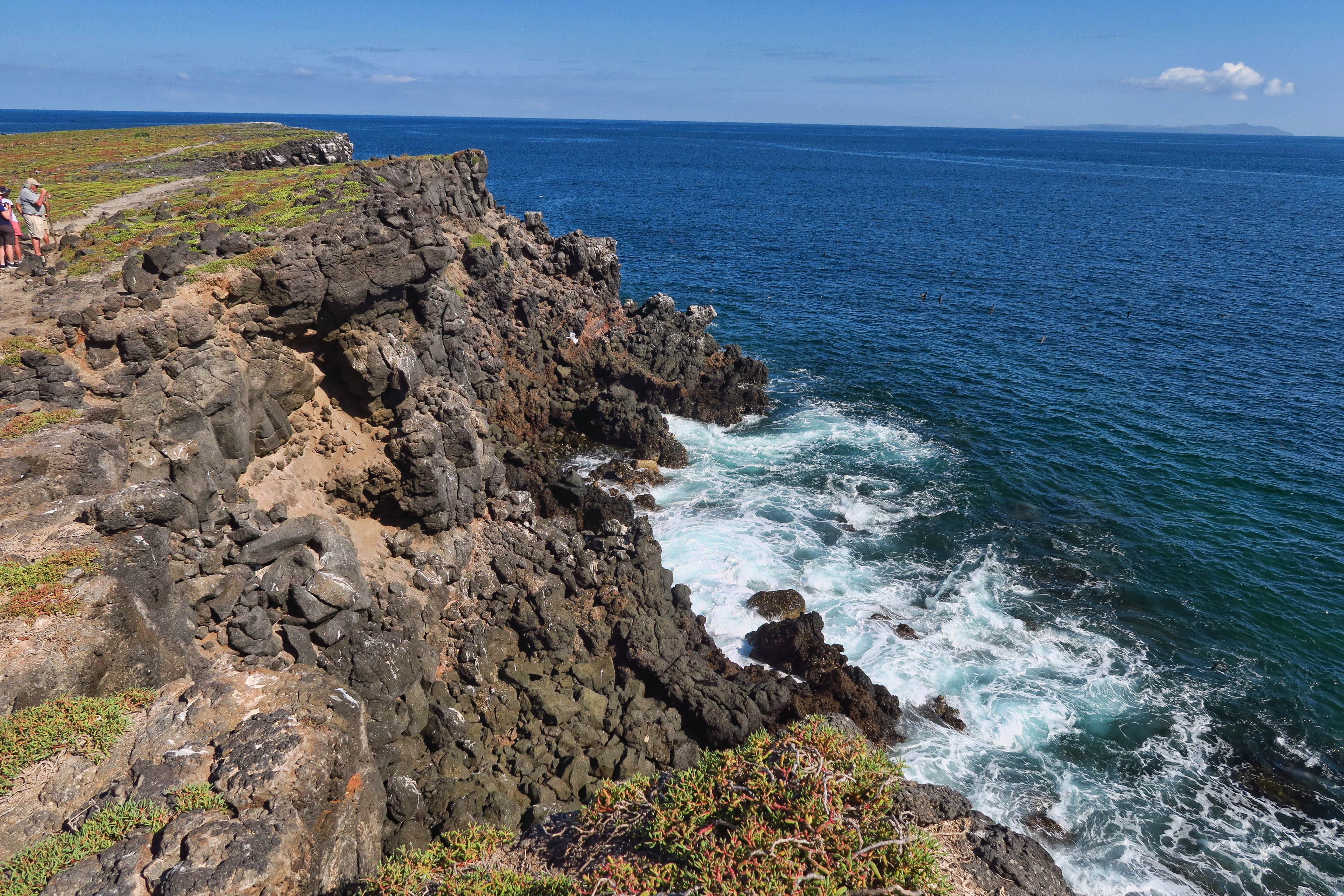 It would be bloody hot if it weren’t for the blissful cross breeze. 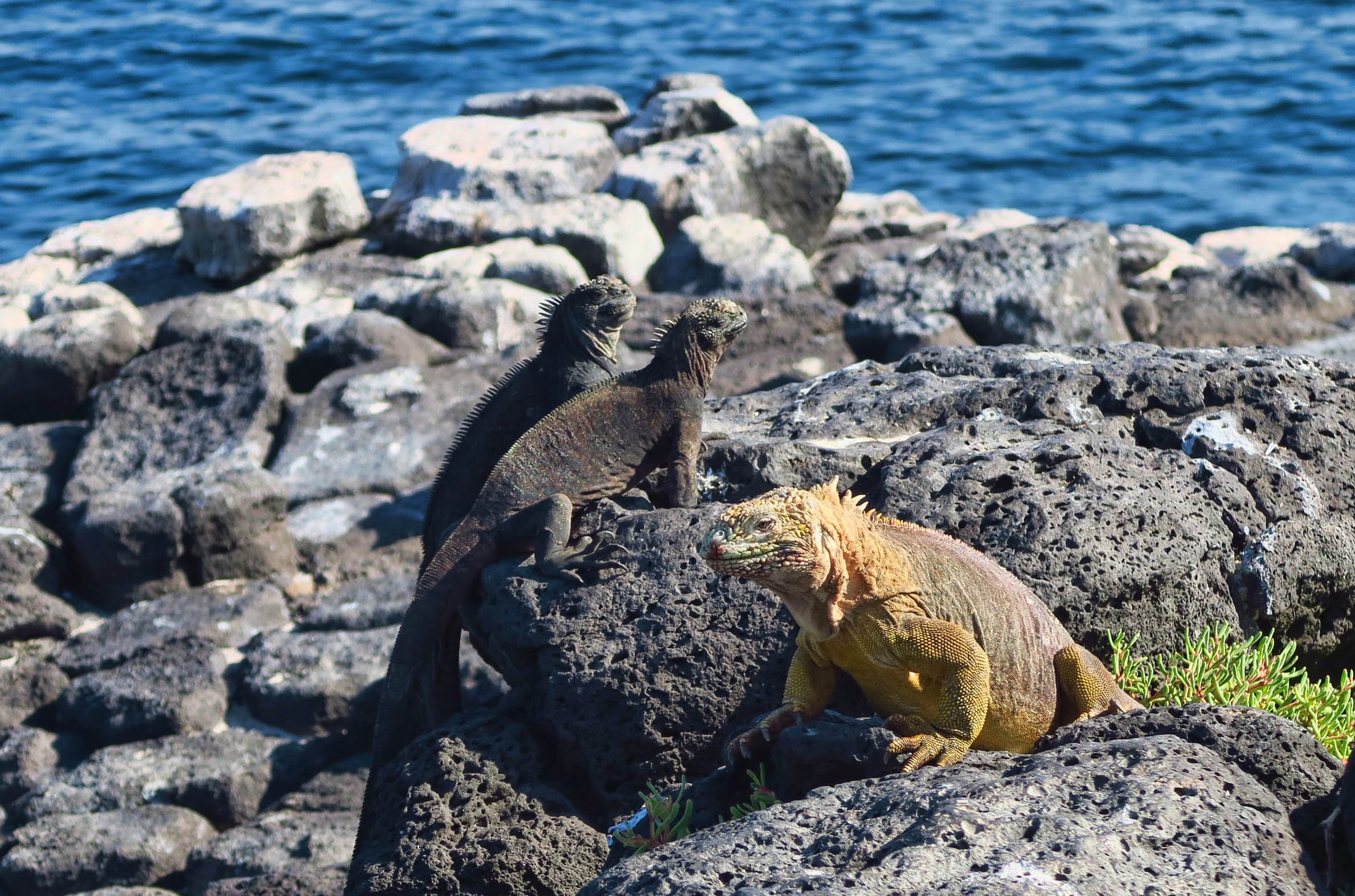 A rare site to see a land iguana (foreground) hanging out with the two marine iguanas. 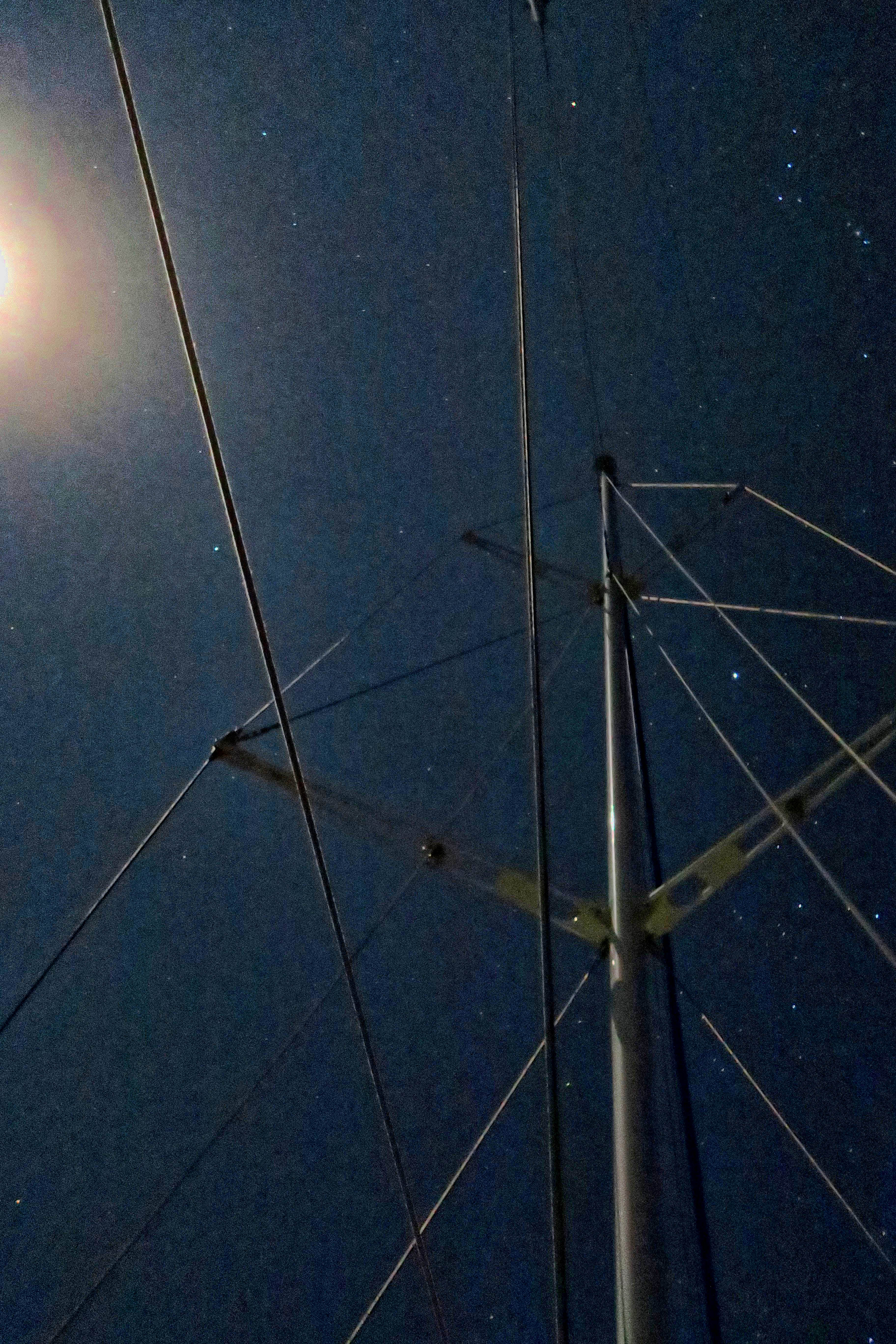 We had the good fortune to be in the islands for the full moon. Unfortunately, this is as good as it gets with my Canon P&S, but still, I believe that’s one of the dippers in the upper right corner…

The chef redeemed himself with our main course meal tonight…fried chicken. Not that I am remotely homesick, but if I were, fried chicken would be the cure…

“In the long history of humankind (and animal kind, too) those who learned to collaborate and improvise most effectively have prevailed.” ~ Charles Darwin