While the Wanderbus is a wonderful way to wander through Ecuador, it’s not perfect. The bus only rolls through town every other day, and not at all on Sundays. So when planning out an itinerary, sometimes one can get “stuck” for longer than they would like.

I arrive into Alusi the afternoon before my scheduled Devil’s Nose train at 8:00am the following morning. Given that the train ride is only 3 hours tops, it would be ideal if I could leave that same afternoon. But that’s not the way the schedule works. I will need to spend two nights here, not one. I worry about the challenge of finding a way to fill 24 hours in this little one horse town, let alone 48.

So it is with a great deal of trepidation that I step off the Wanderbus into the pouring rain. As I race across the town square, I get a glimpse of some gigantic scaffolding being erected, but it’s too much in the early stages of construction to make out what is taking shape. I figure it must be come politicians or officials from the province coming to town. 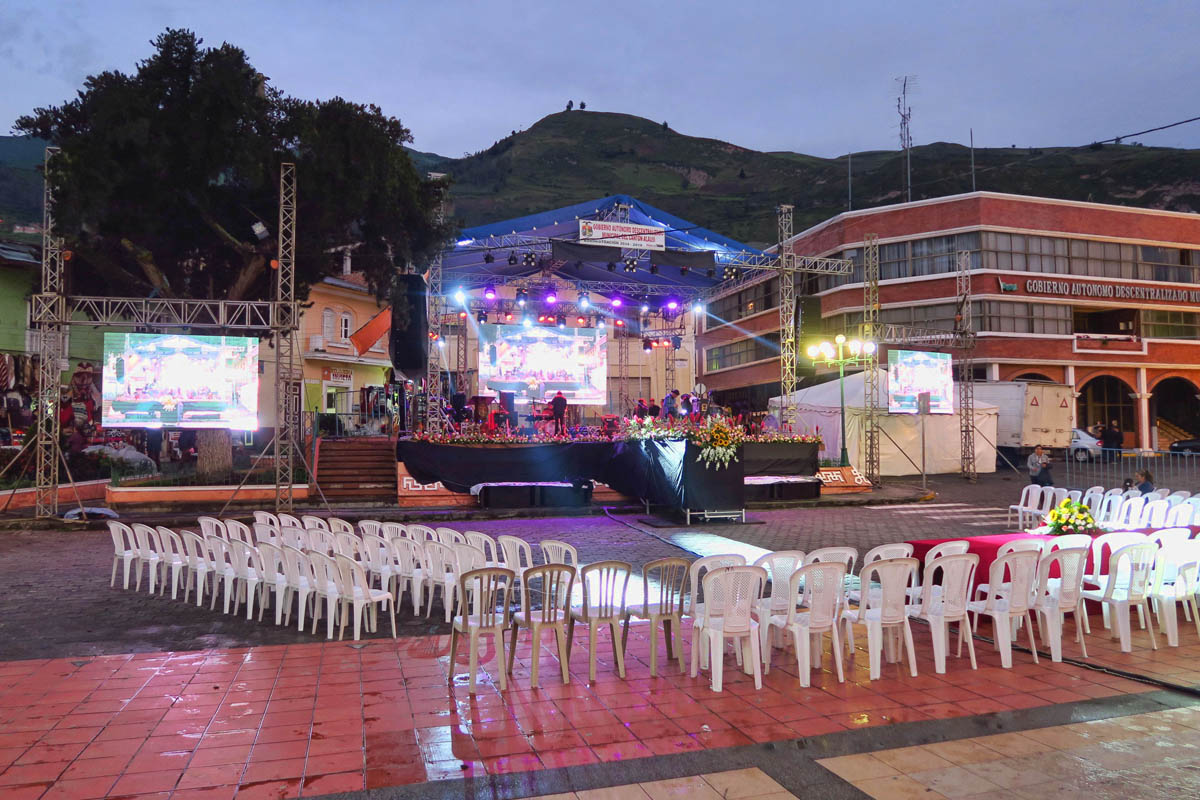 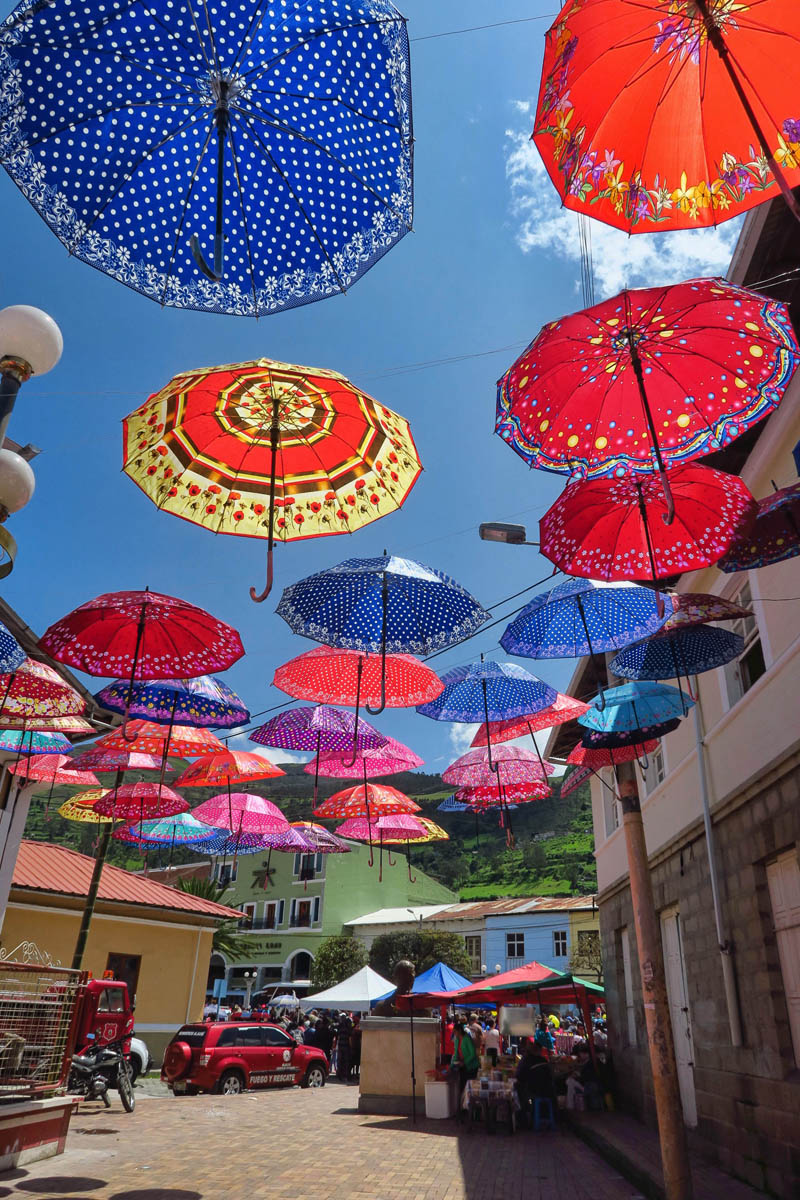 Rain and clouds move out for a beautiful sunny day. 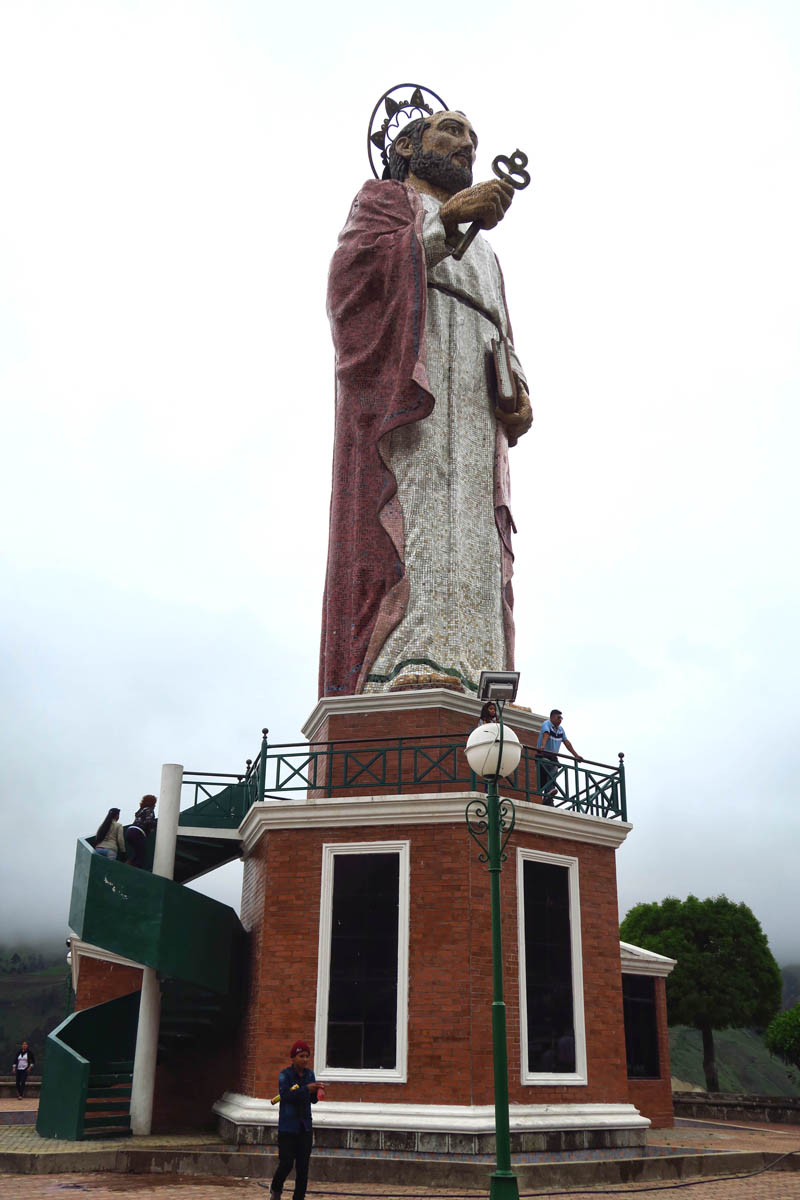 Monument to Saint Peter, the patron saint of the city up on the hill overlooking the city.

Later that evening as the rain abates, I walk the full length of the town end to end, climb the path up to the statue of Saint Peter, town patron saint, and I eat a meal. I’ve now done it all, save for the train ride tomorrow morning. As my family often quotes an old family friend from Australia who came to visit my brother, “whatta we gonna do now?”

What on earth will I find to do for the next 48 hours, particularly given I no longer have a laptop? While I can easily kill a day writing and reading blogs, editing photos, sending emails, not to mention the trio of Facebook, Twitter and Youtube, those options are all off the table now. No TV, no radio, no podcasts. Even the tunes on my Android have stopped loading. I am a woman without a pastime.

For all those same reasons, followers of this blog understand why I have fallen so far behind in posting. Being without a laptop for almost two months put me even further behind than usual. So you now know just how far behind….I had arrived in Alausi during “Carnavale!”

Carnavale (or “Carnival” as we know it) is a big holiday in Catholic-based Latin American countries. Falling on “Fat Tuesday” before Ash Wednesday, this time is the last chance for a blow out before the start of Lent. So most towns fire up the festivities in their own way for this holiday.

I had been warned to avoid crowds during this time and lay low, unless I wanted to get sprayed, hosed, or soaked in celebration. For some odd reason, Ecuador has a custom of unloading entire cans of spray foam on each other as a form of celebration. But I thought being in the tiny hamlet of Alausi with a population smaller than my home town in rural Texas, I would avoid the mayhem….”Or so I thought.” 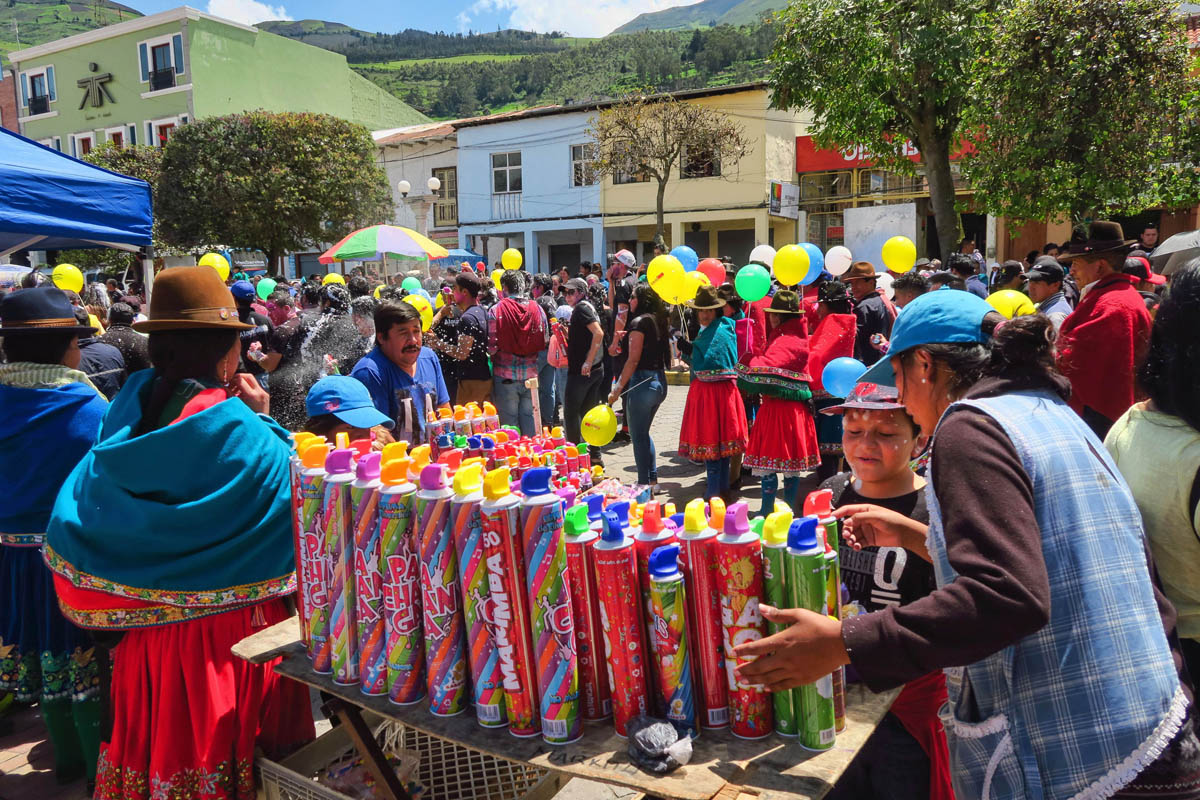 Foam Cans for sale on every corner. 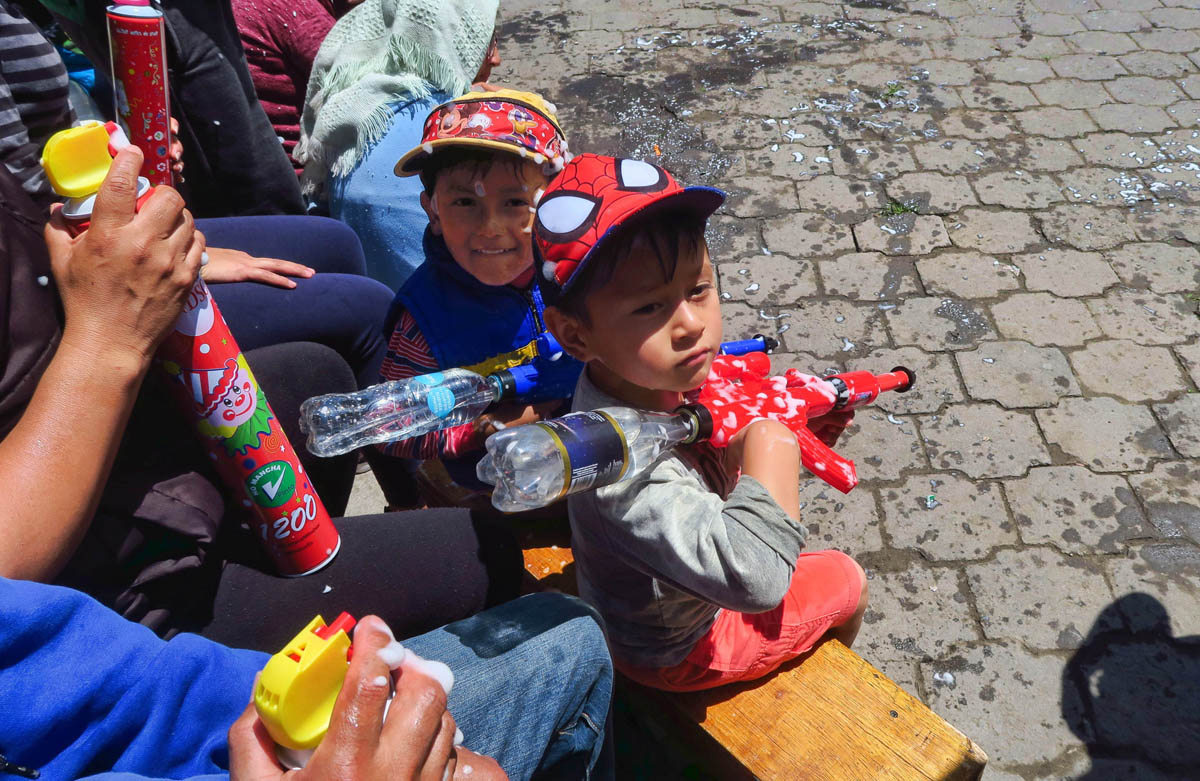 I don’t typically post photos of children, but Dad encouraged them to pose for the camera. 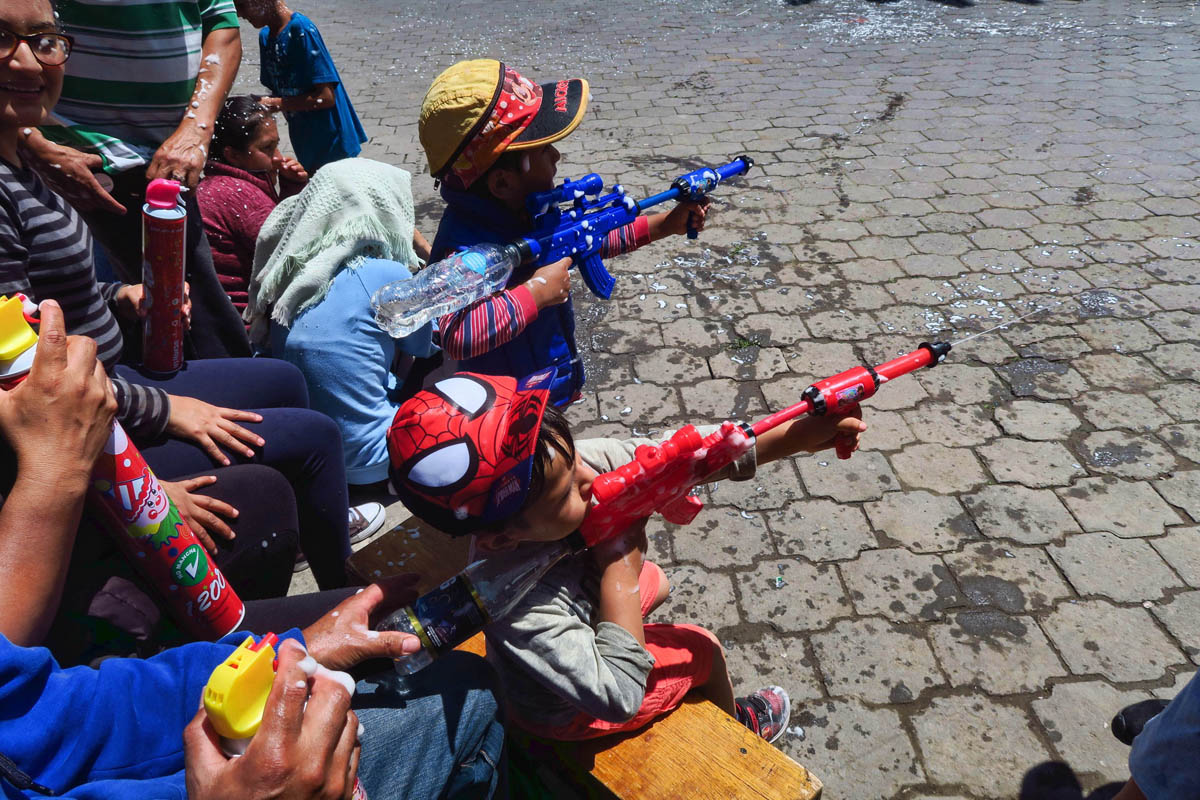 Then Dad tells them to give the tourist a demonstration of their weaponry. 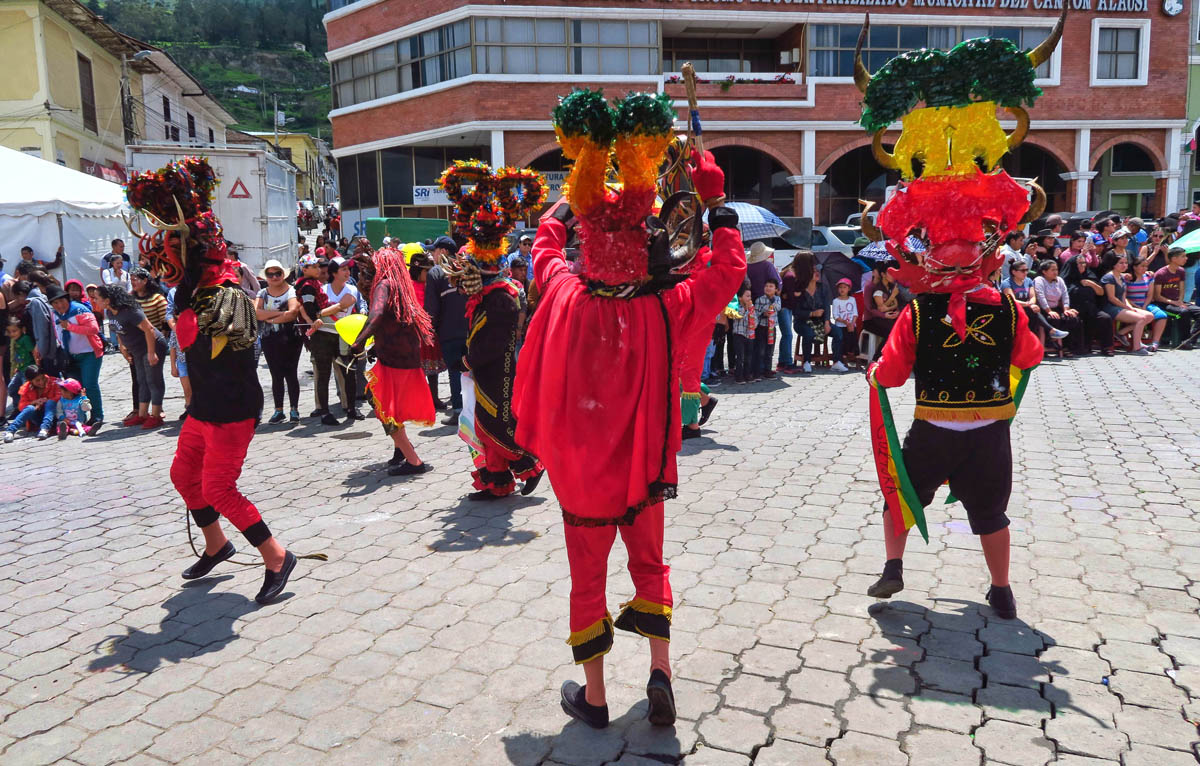 Some groups go all out with the costumes. 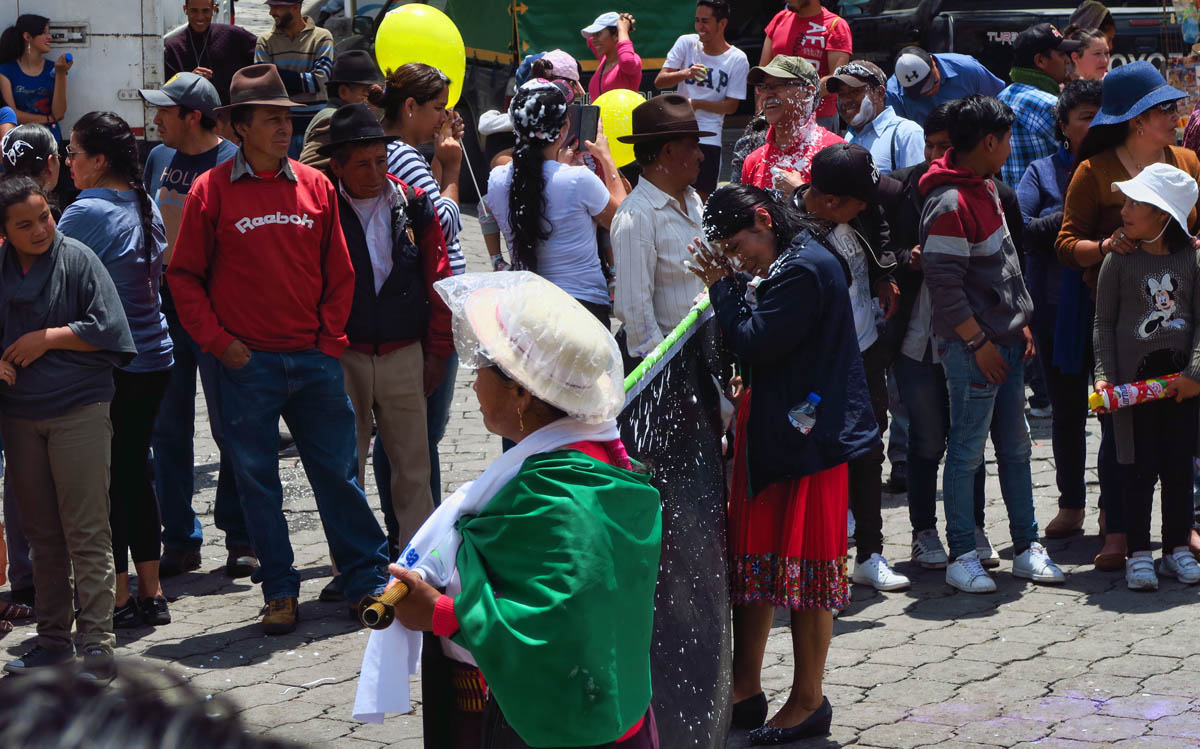 This indigenous woman has wrapped her bowler hat in plastic. 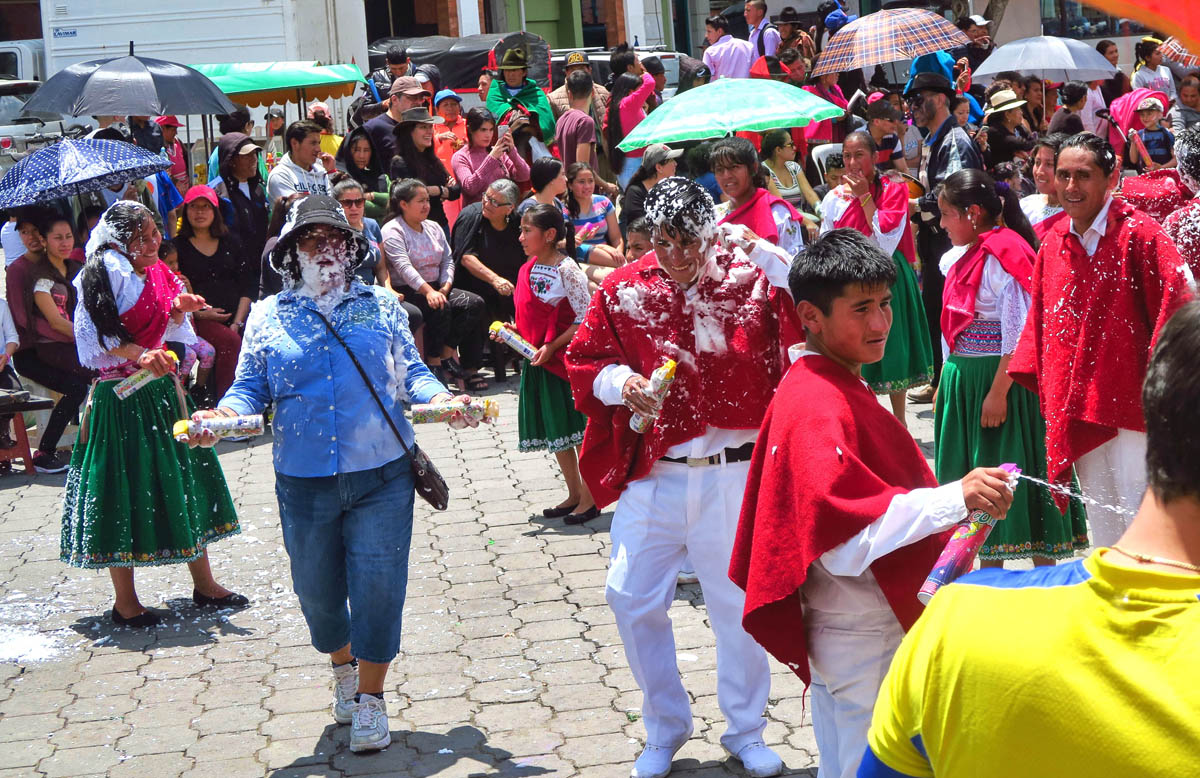 This woman is a two fisted shooter. 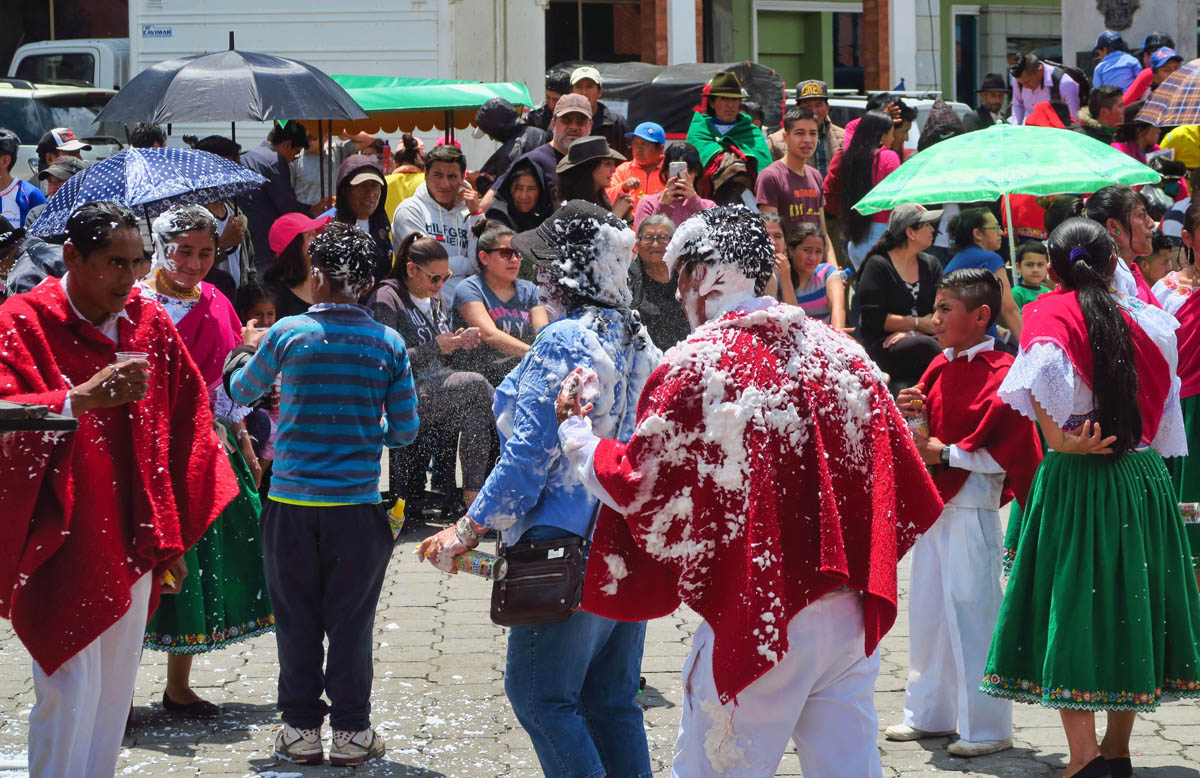 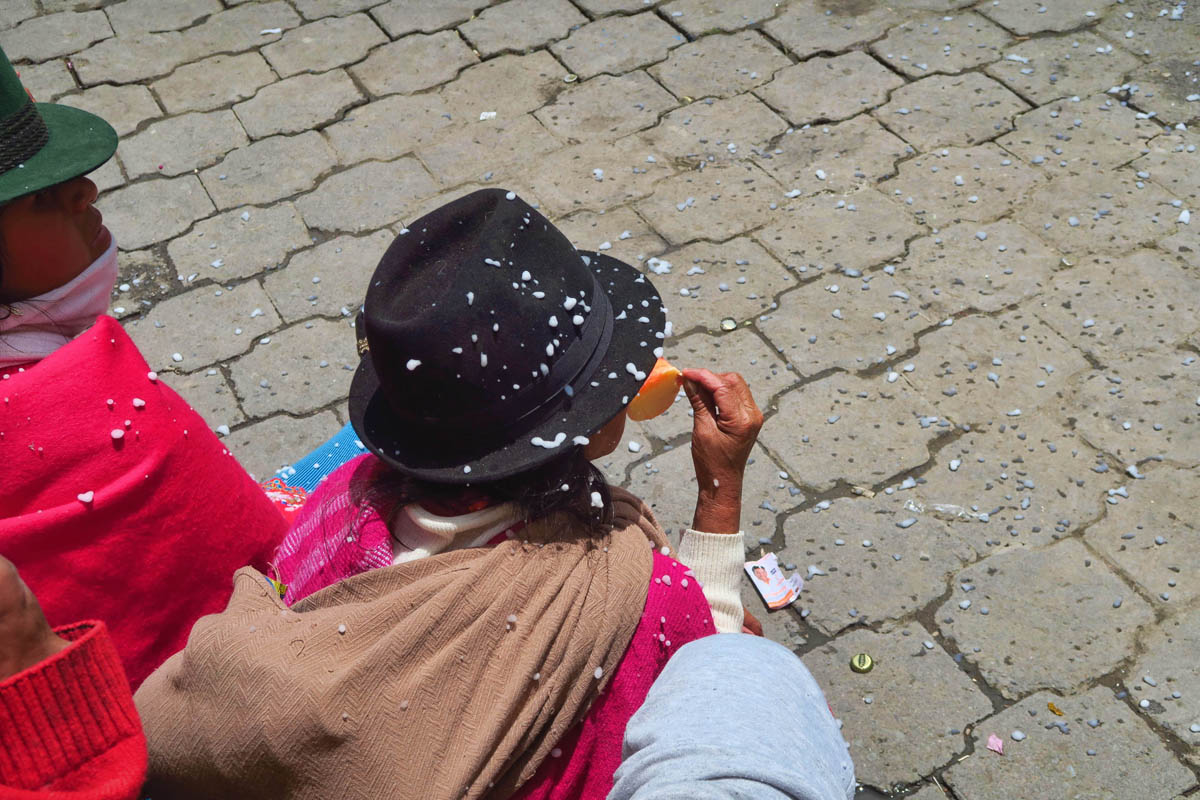 Enjoying an ice cream from the sidelines.

Earlier that morning on the way back into town on the train, I’d noticed a disproportionate amount of traffic. Vans, big open air trucks overflowing with people appeared to be lumbering in from the hinterlands. I just figured it’s market day. So I come back to the Posada to download my photos, change my clothes, then set out to find the market. As I walk out the door, my Spanish only-speaking Posada host gives me a few signals that I loosely interpret to mean “Watch yourself!” Unfortunately, my Spanish is not good enough to understand much more.

Heading the one block over to the main street, I hear the sounds of a parade. I find a corner beneath a vendor tent to take cover as I watch what is unfolding. It’s like Ecuador’s version of the Macy’s Thanksgiving Day Parade, as groups of parade participants march down the main street, stopping to perform a folkloric dance in front of the Carnavale Queen and town officials on stage. This goes on for three straight hours without pause. Meanwhile it is a “foam fight” of monumental proportions happening on the sidelines, punctuated by the launch of incoming water balloons bursting around my feet. 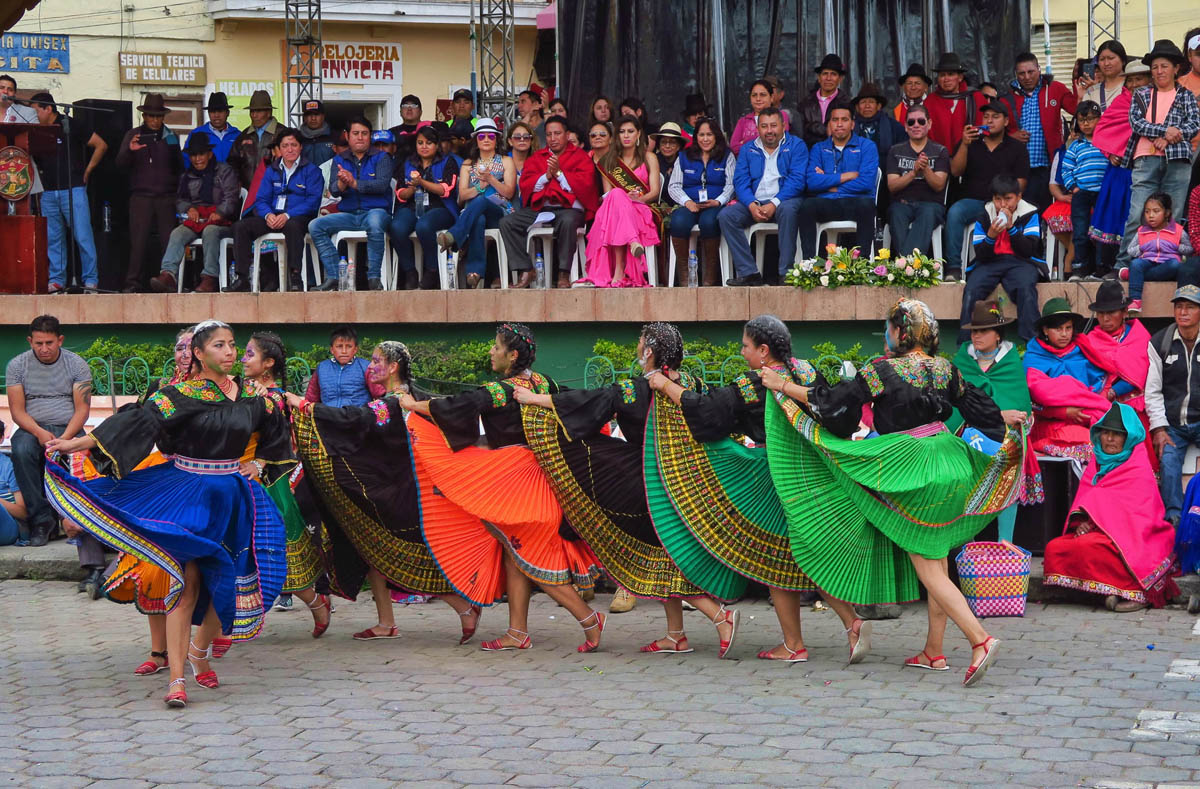 Note the woman center stage wearing the bright pink dress. I was able to ascertain that she was crowned Carnavale Queen last night. 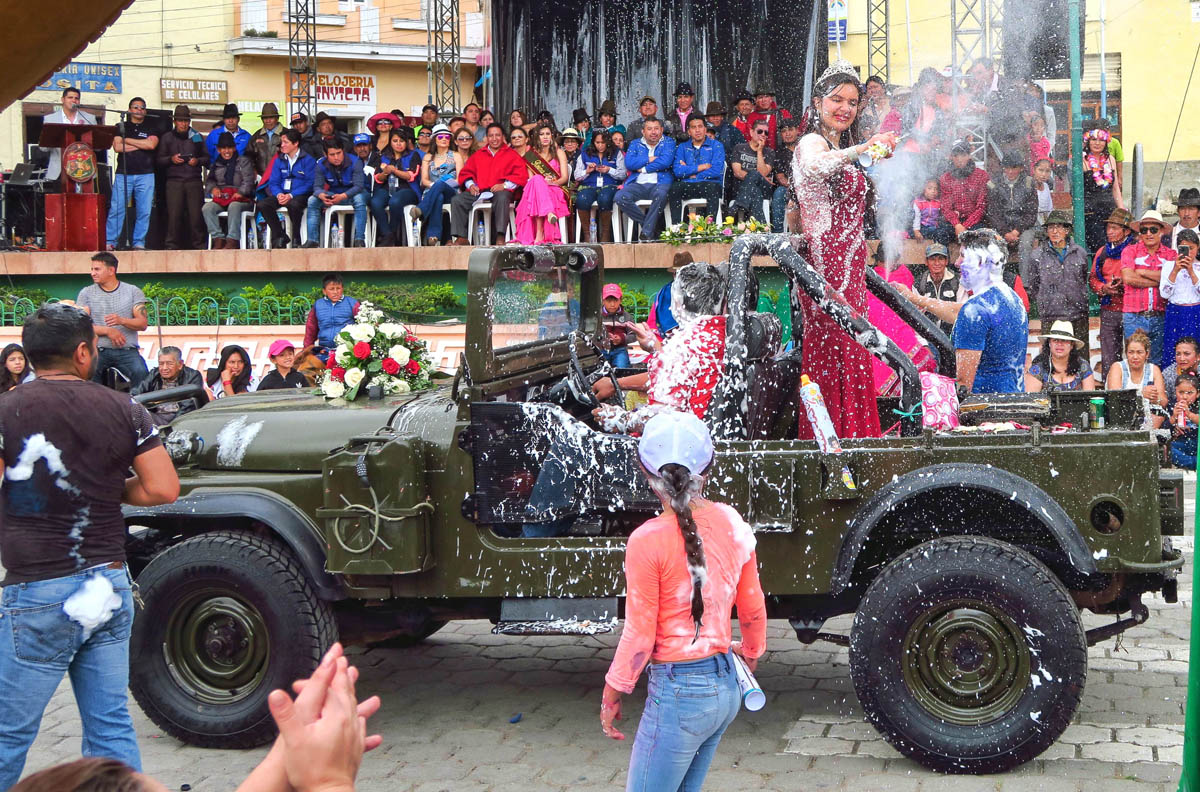 Here is last years Carnavale Queen, wearing a foam-covered gown in the back of a Jeep. 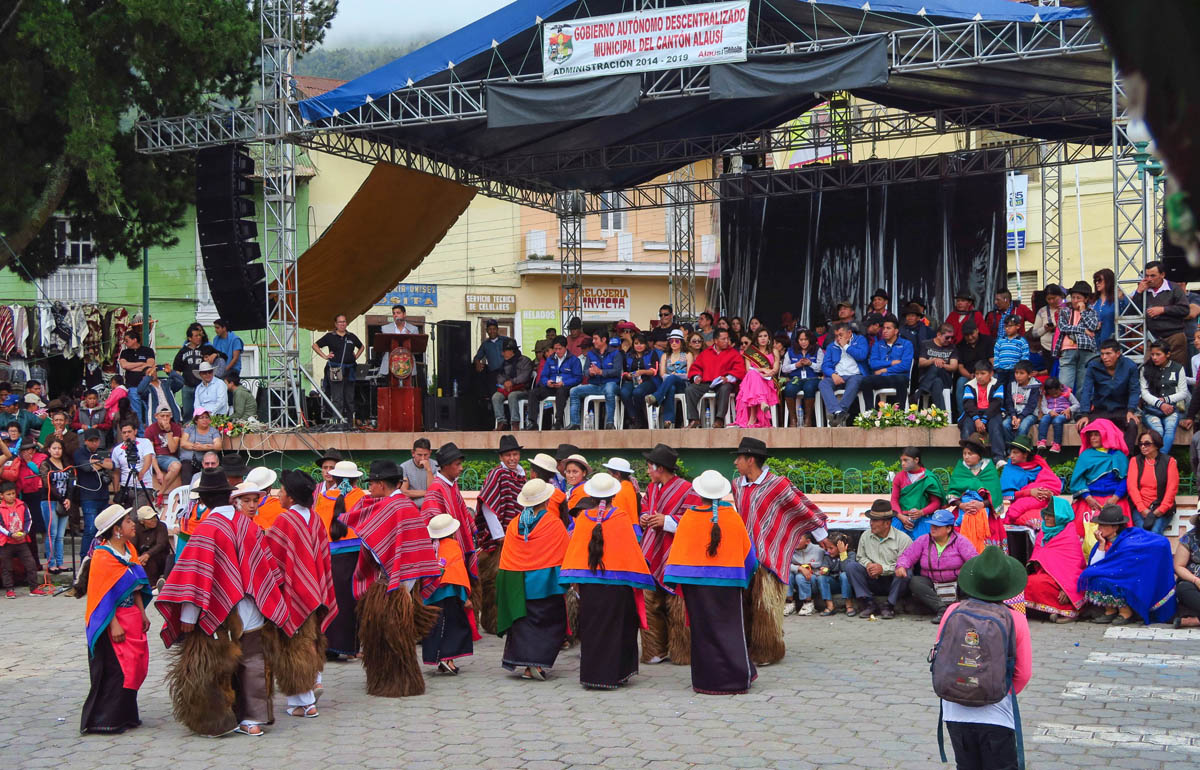 Notice the furry chaps on the gents. 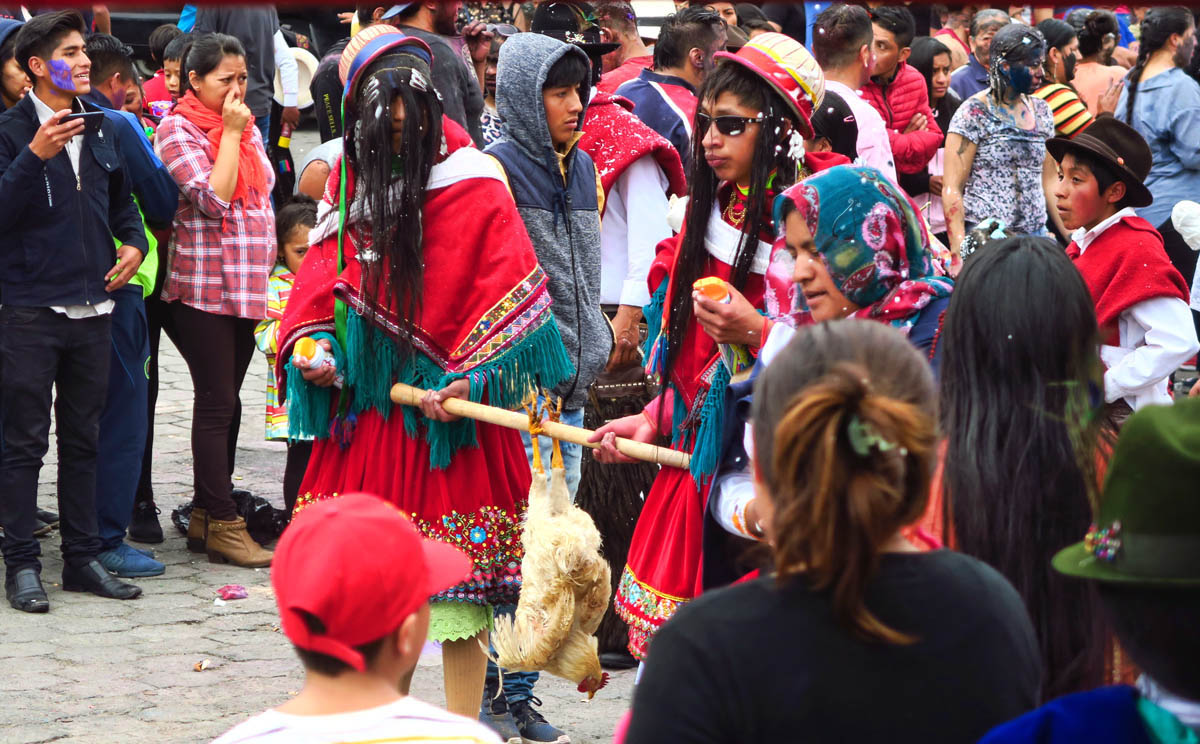 This appears to be some sort of parody on one of the indigenous tribes. These guys are in drag, carrying a dead chicken on the pole between them. Strange humor. 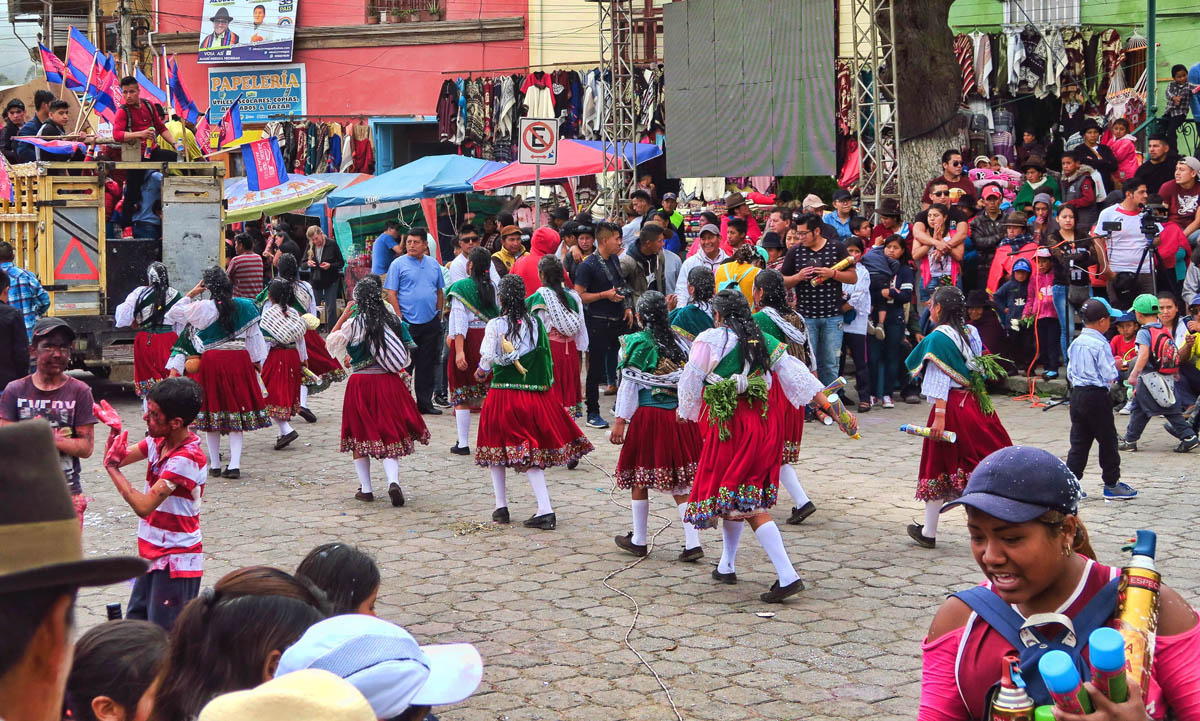 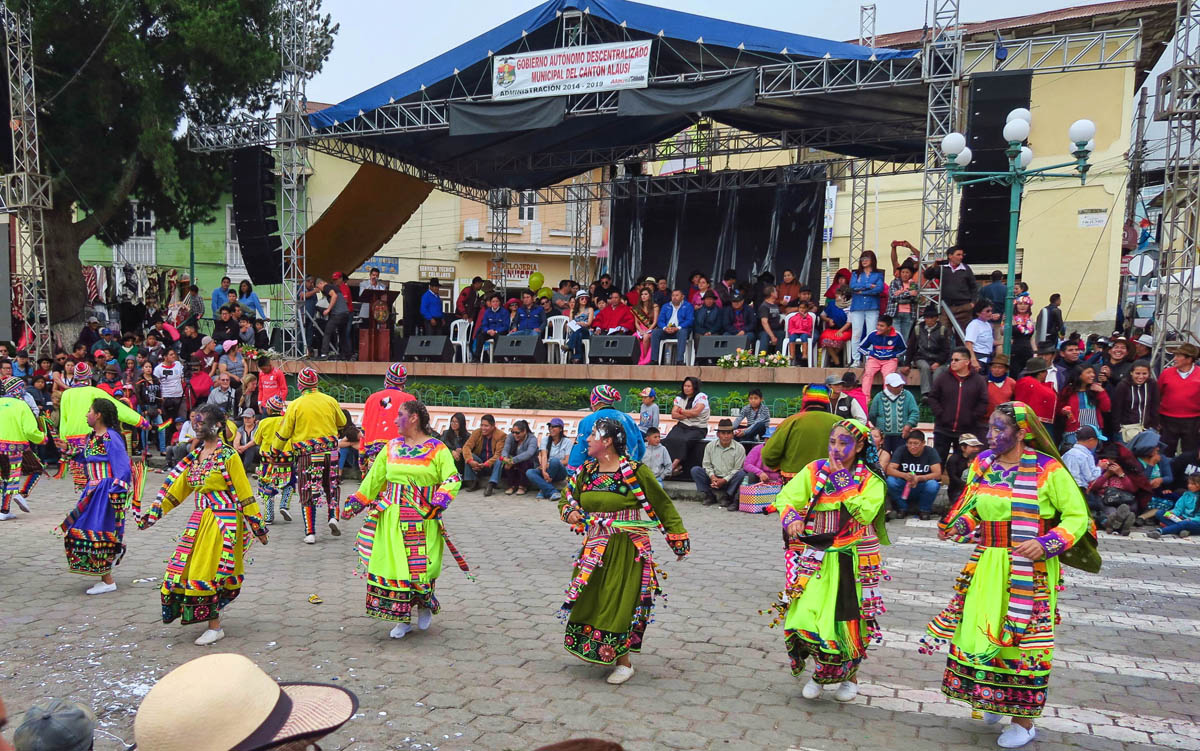 Some of them are sporting some pretty wild costumes. 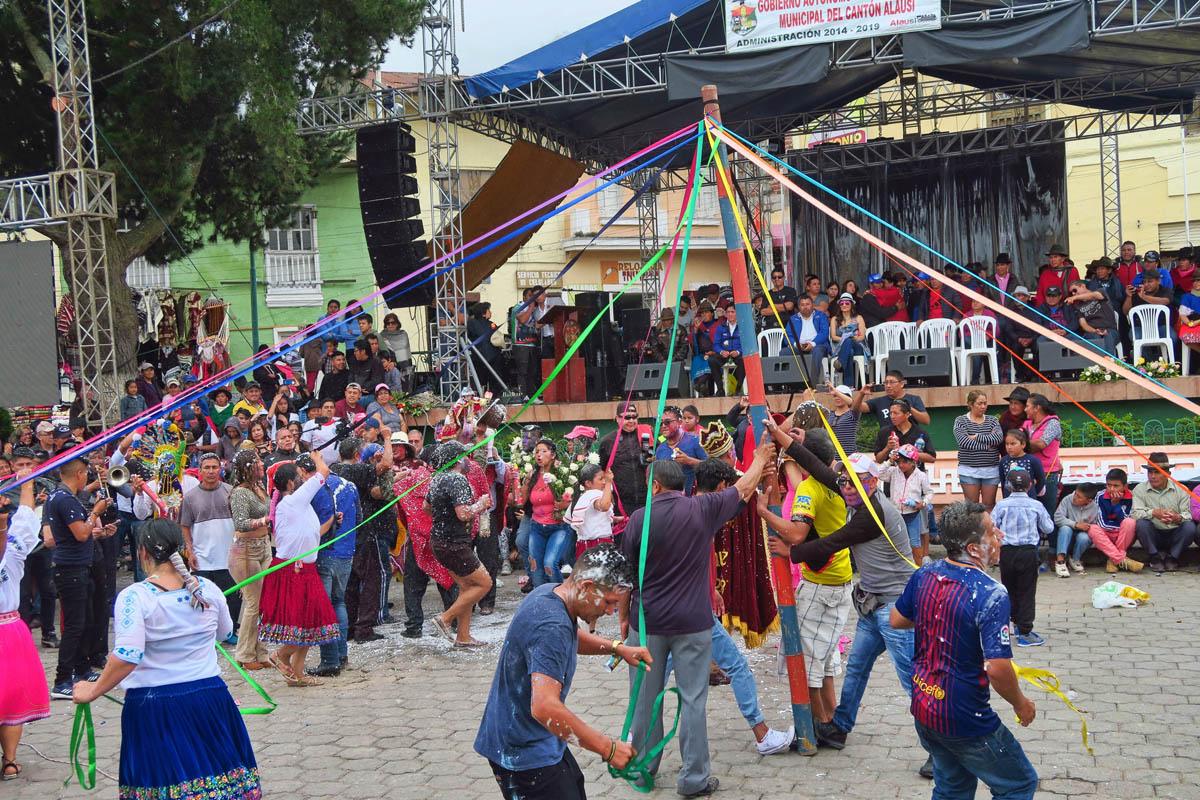 This group has brought their own May Pole.

As I look around, I realize I am the only “gringa” in the crowd. Everyone else seems to be local, or at least trucked in from the nearby villages. I am so grateful for the mercy they extend to me, smiling and welcoming me into their circles, yet carefully avoiding me when unloading an entire can of foam into their friend’s ear.

The party goes on all night. I am awakened at 4:00am to the sounds of Queen playing (stomp, stomp, CLAP… stomp, stomp, CLAP)…”We will, We will, ROCK YOU!” But I don’t mind the middle of the night wake-up call, because I have enjoyed a peek into a very special celebration in a culture quite different from my own. 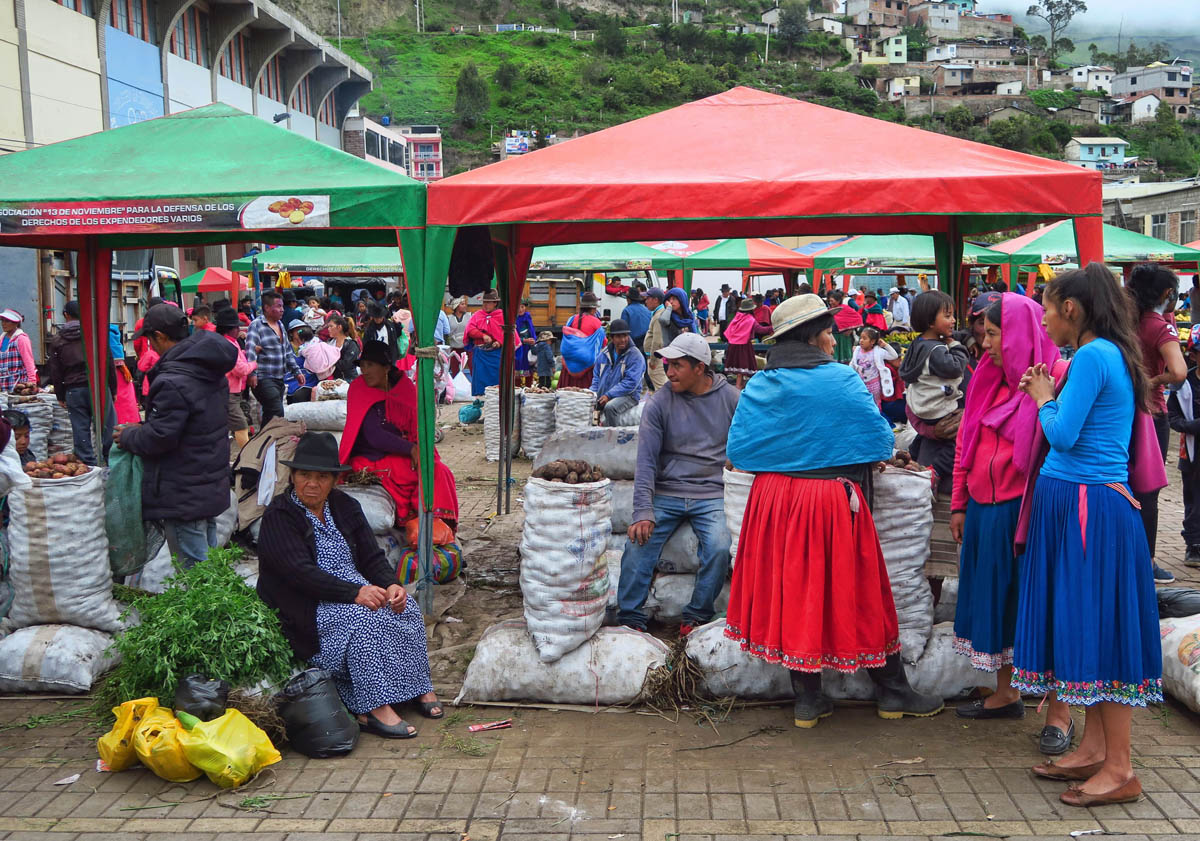 I leave the parade for a while and walk over to check out the local market nearby. 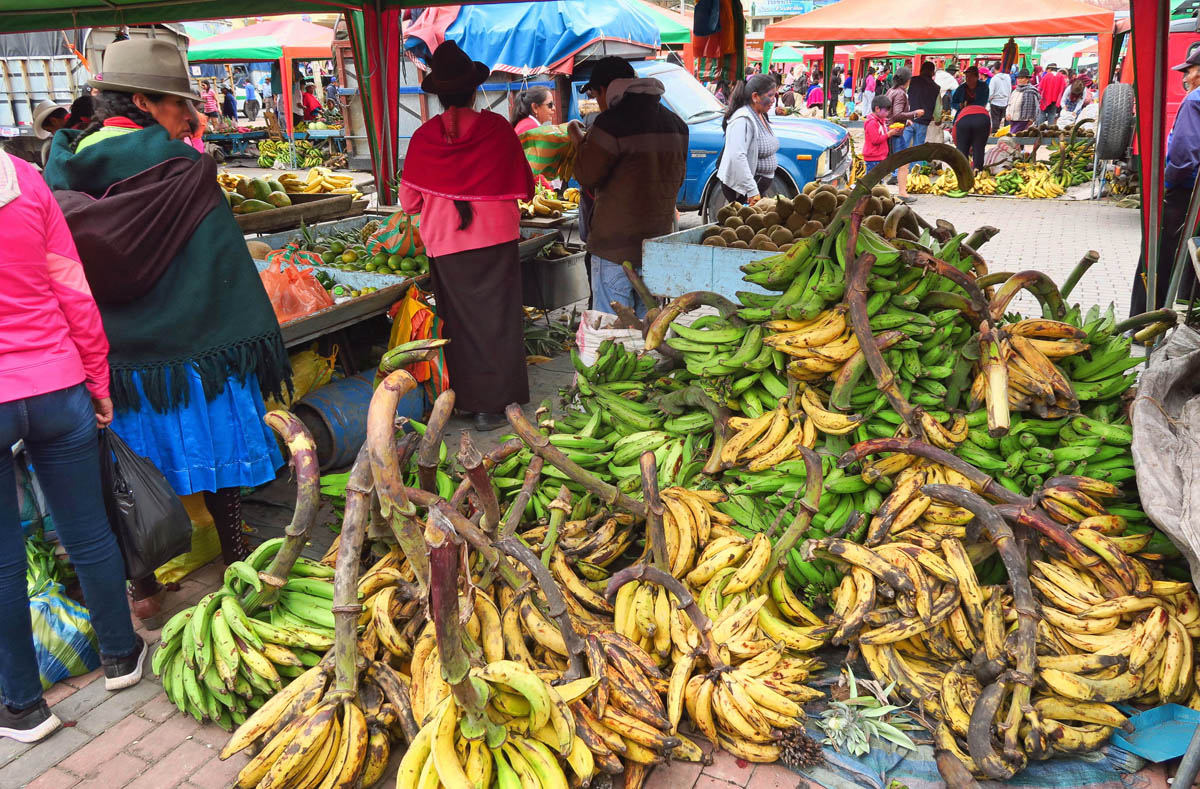 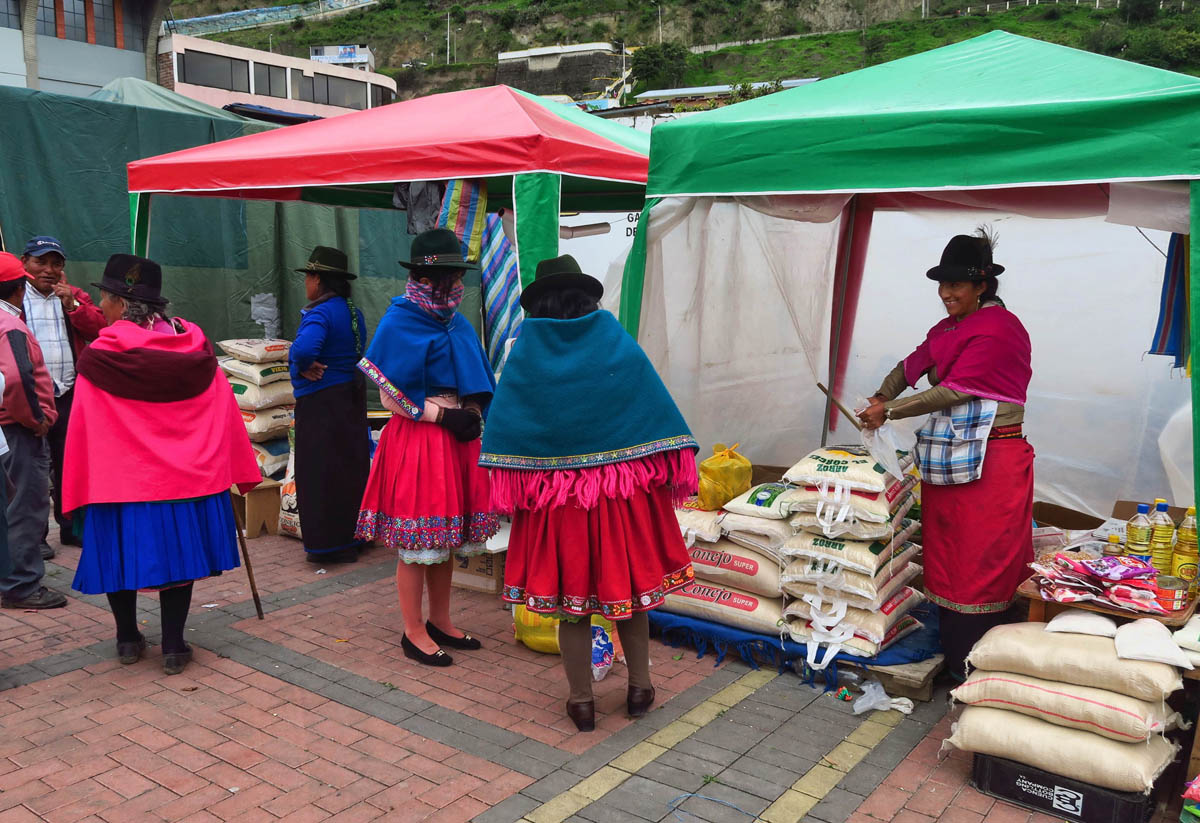 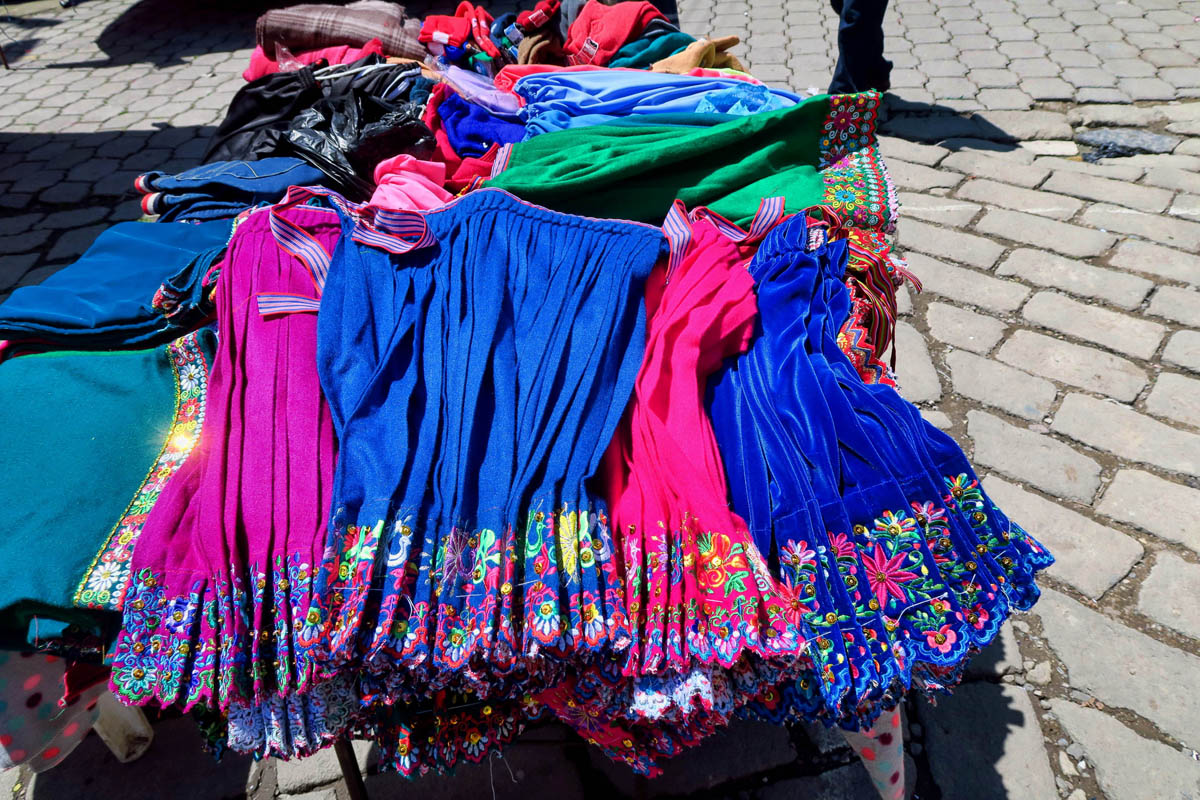 Perhaps we could interest you in a brightly colored, embroidered skirt? 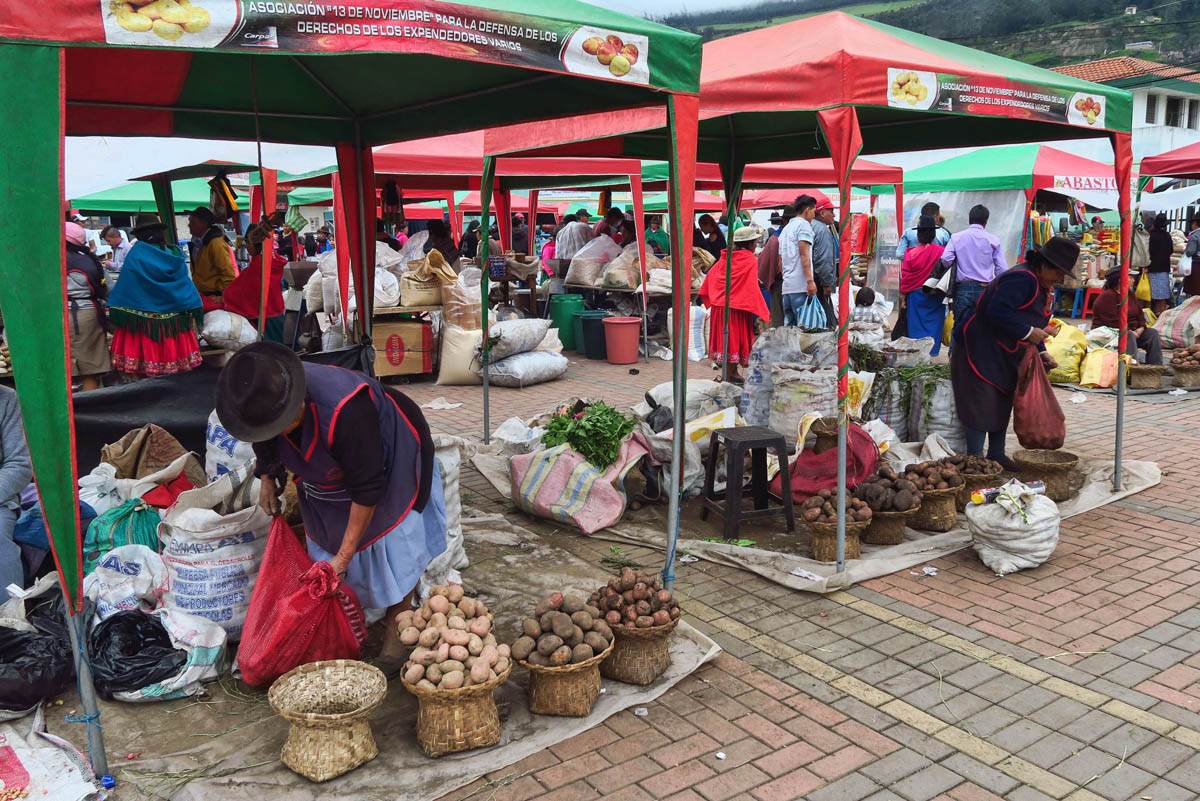 Ecuador grows 28 different varieties of potatoes. No wonder potato soup (Locra) is one of their staple meals.

When I awake the next morning for my bus onward, it’s all gone. Cleaned up as if it never happened. Where did it all go? The chemical foaming agent, the hundreds of empty aerosol spray cans. I have to beat back my typical cynical thoughts of “what is this doing to the environment?” My concerns for the can disposal are as foreign to them as their custom of emptying a can of foam on their neighbor is to me. It’s a cultural difference that has a long way to go to translate. 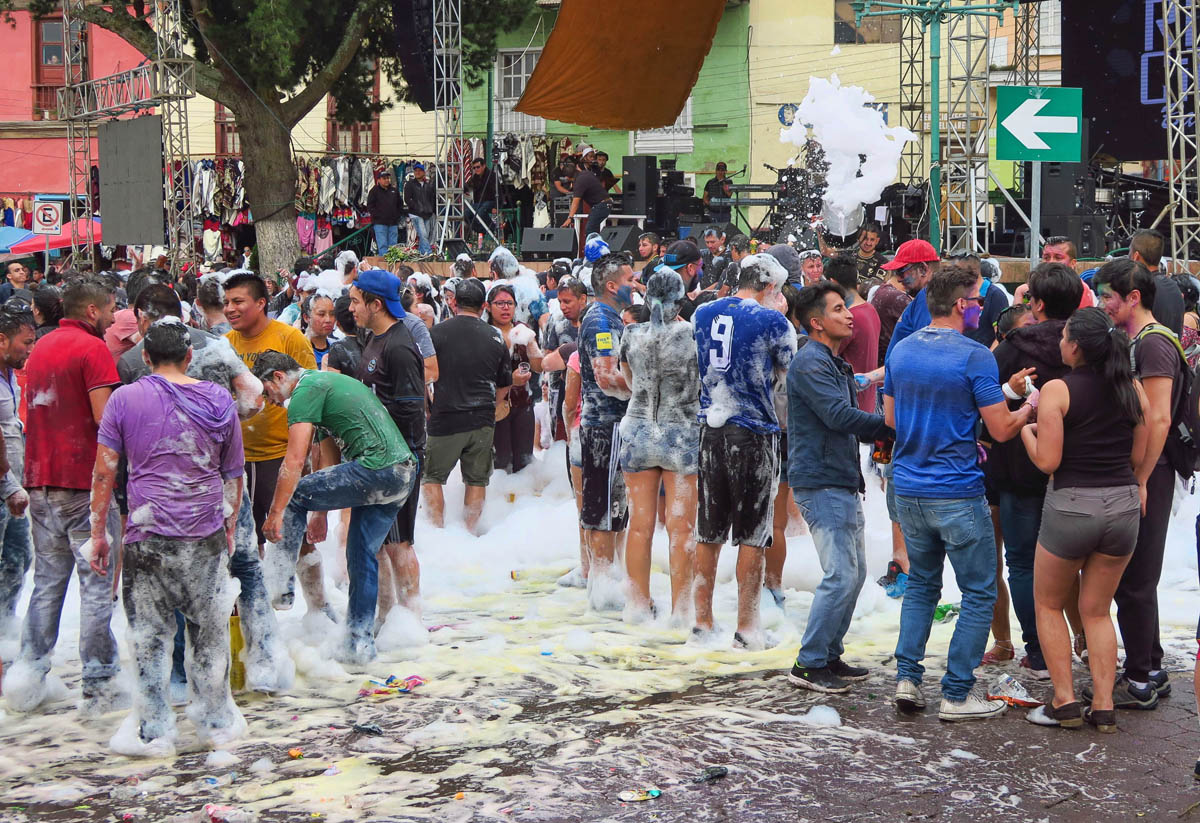 I return to the town center where the parade has ended, and a DJ is now blasting out tunes. All hell has broken loose. 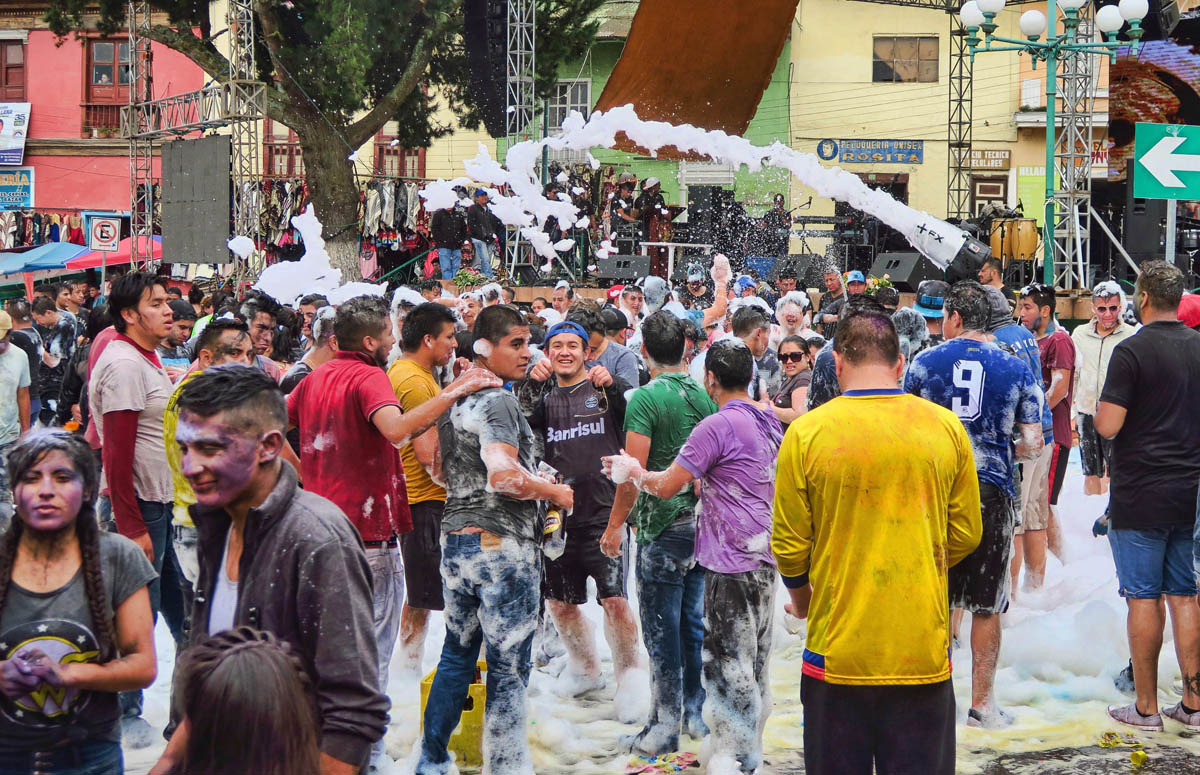 There is an actual FOAM CANON! I have never even heard of a foam canon before, let alone seen one. 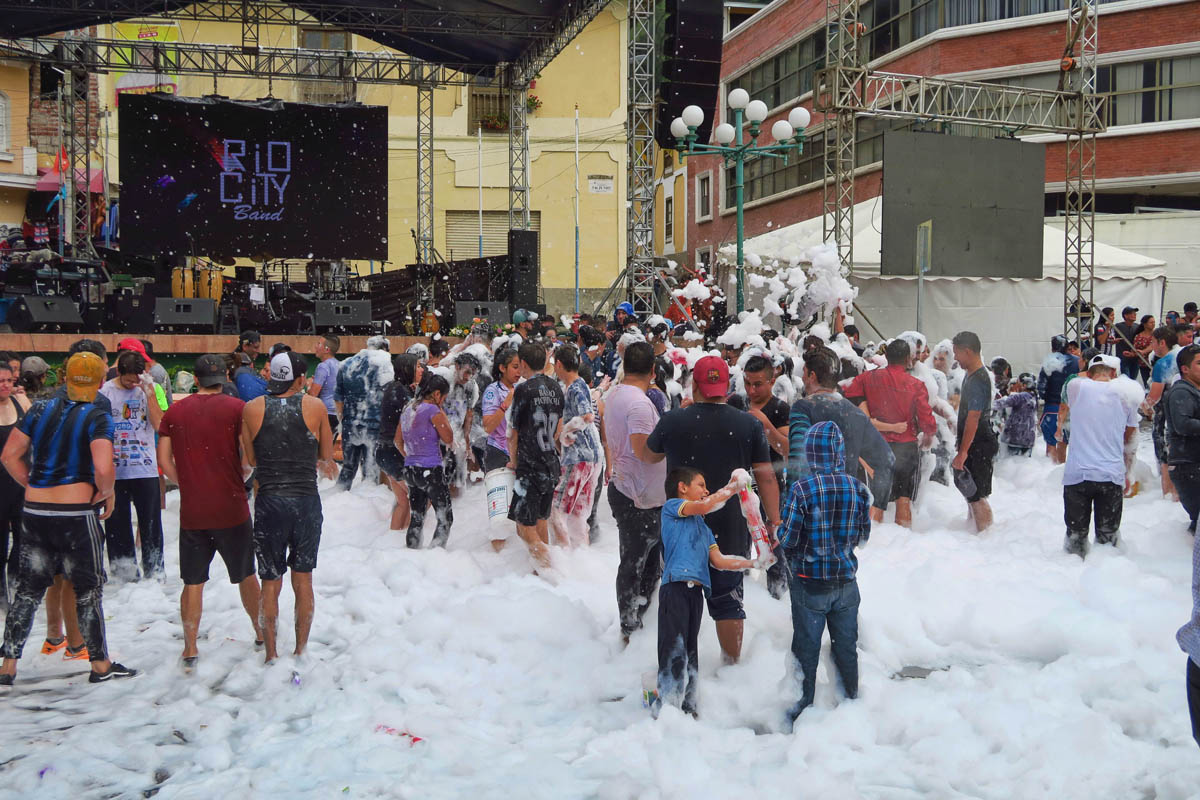 It’s risky getting too close, as I don’t want my camera to get “foamed,” but everyone is very respectful to what appears to be the only gringa in town. 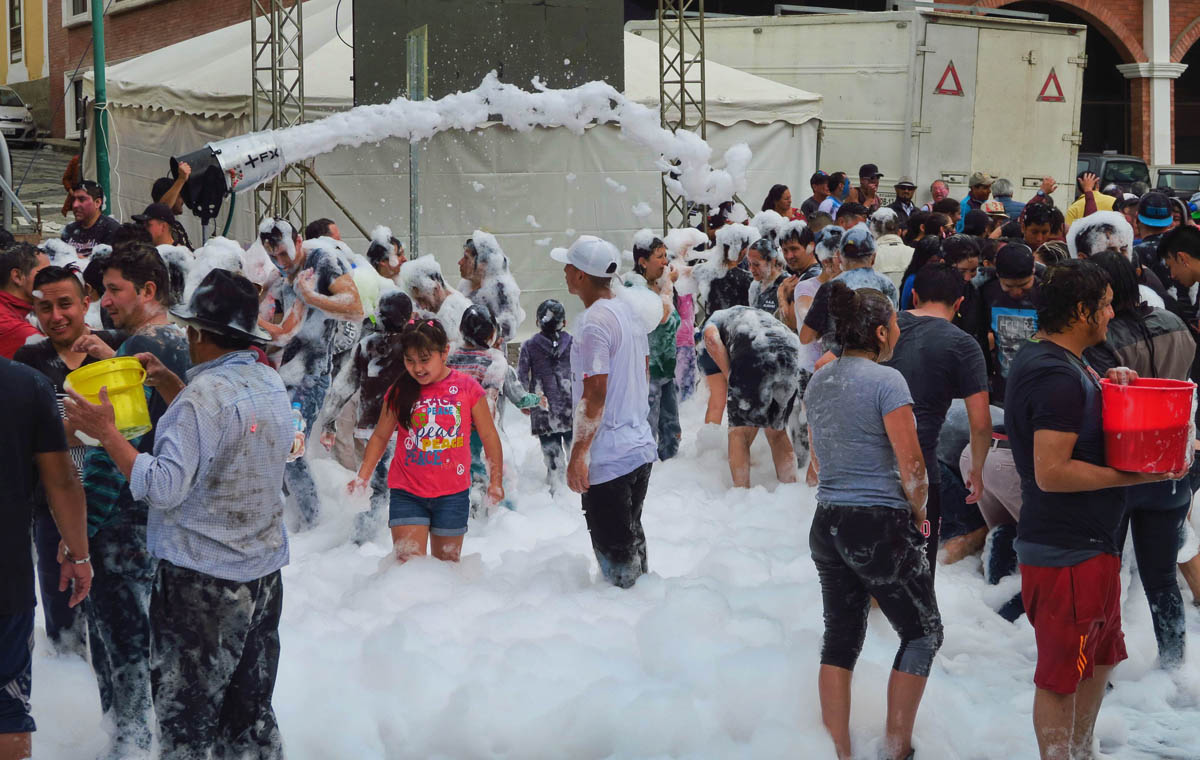 I finally leave when the foam is knee high, and I am too tired to stand any longer, though the DJ goes on through the night…

14 thoughts on “All Out Assault on Alausi”