One of the call-out boxes in my Lonely Planet Portugal Travel Guide proclaims Lisbon’s Tram No. 28 as an attraction not to be missed. Described as “a quaint yellow tram that screeches and rattles through the narrow streets of the city” it’s as iconic as the monuments it rattles past.

It’s not just a major tourist attraction, however. It remains a vital part of Lisbon’s public transport network, as it’s 1930’s design is the only public transportation vehicle capable of climbing the unforgiving hills and navigating the tight curvy turns of some of the more narrow streets originally designed to accommodate horses. In fact, the first tramway in 1873 was a horse-drawn car line, later electrified in the early 1900’s.  “Remodelados,” or remodeled version was put in use in the 1930’s. 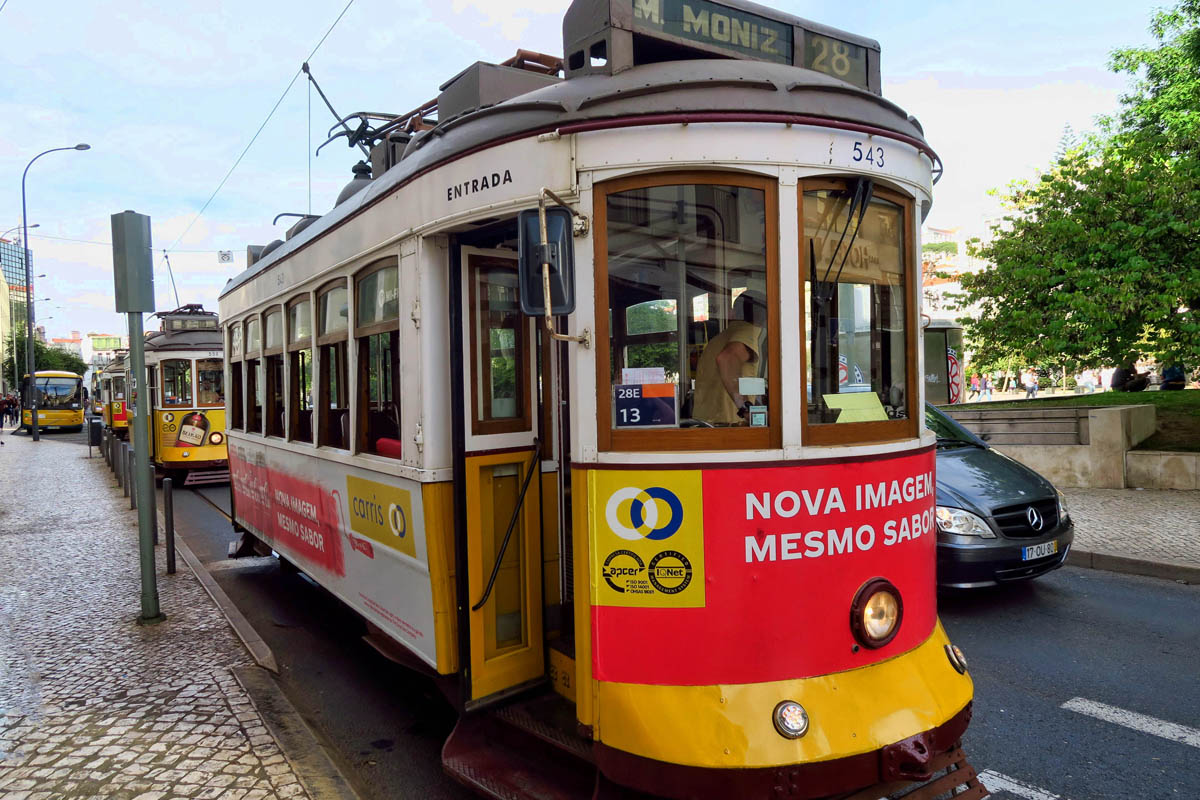 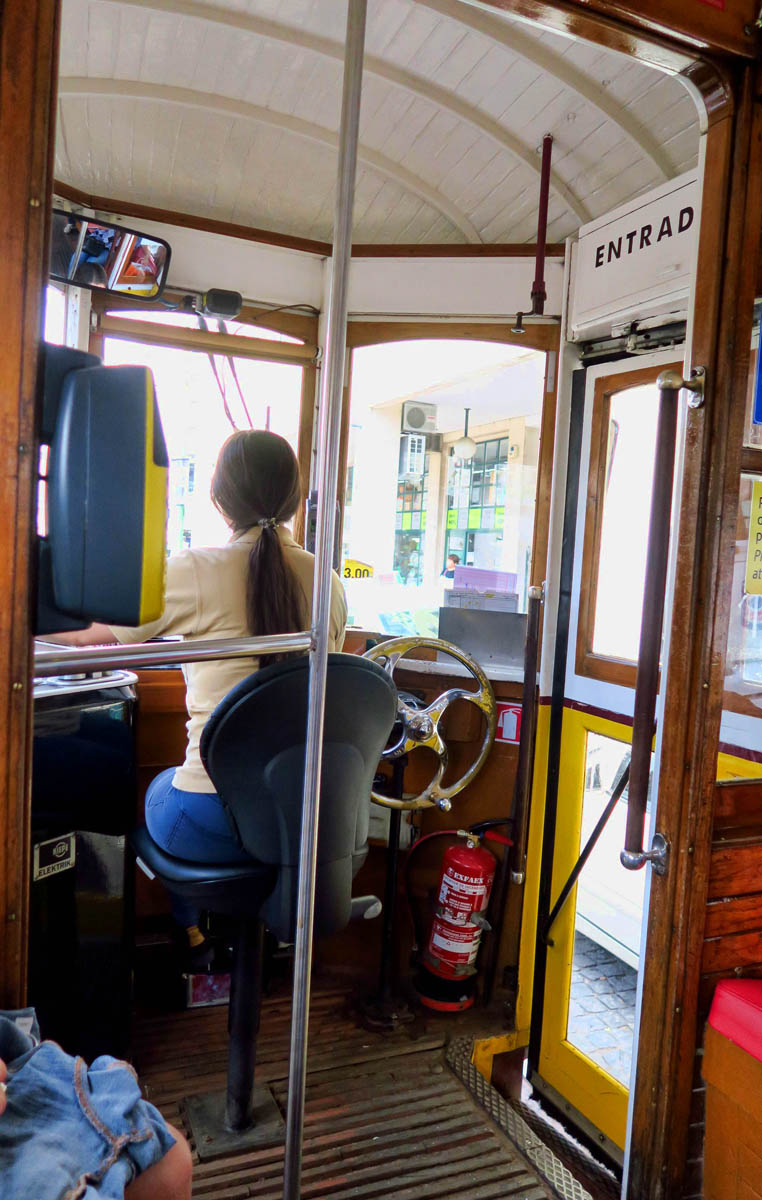 How cool that I have a woman operator! It seems like a stressful job.  There are lots of “bells and whistles” up there! 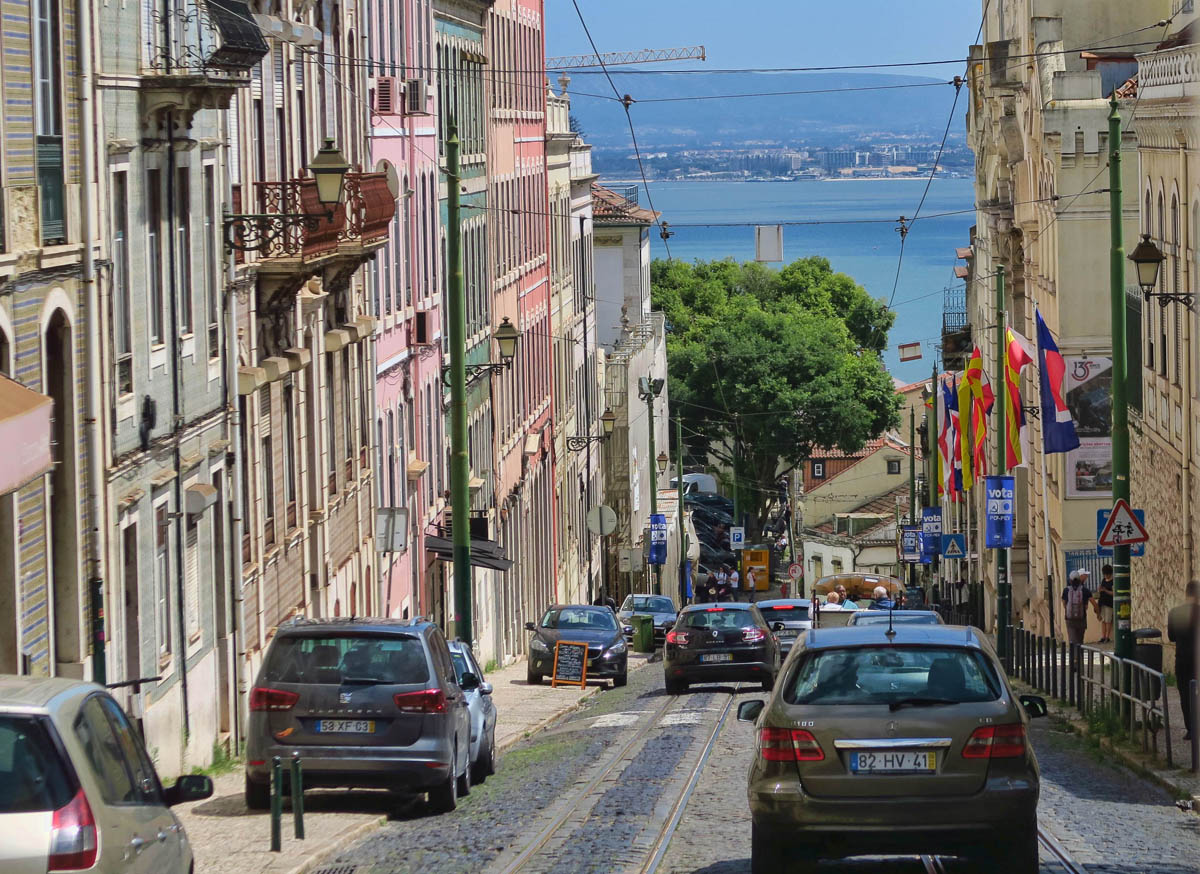 It’s on the downhill stretches where the water is in view that really makes me think of San Francisco. 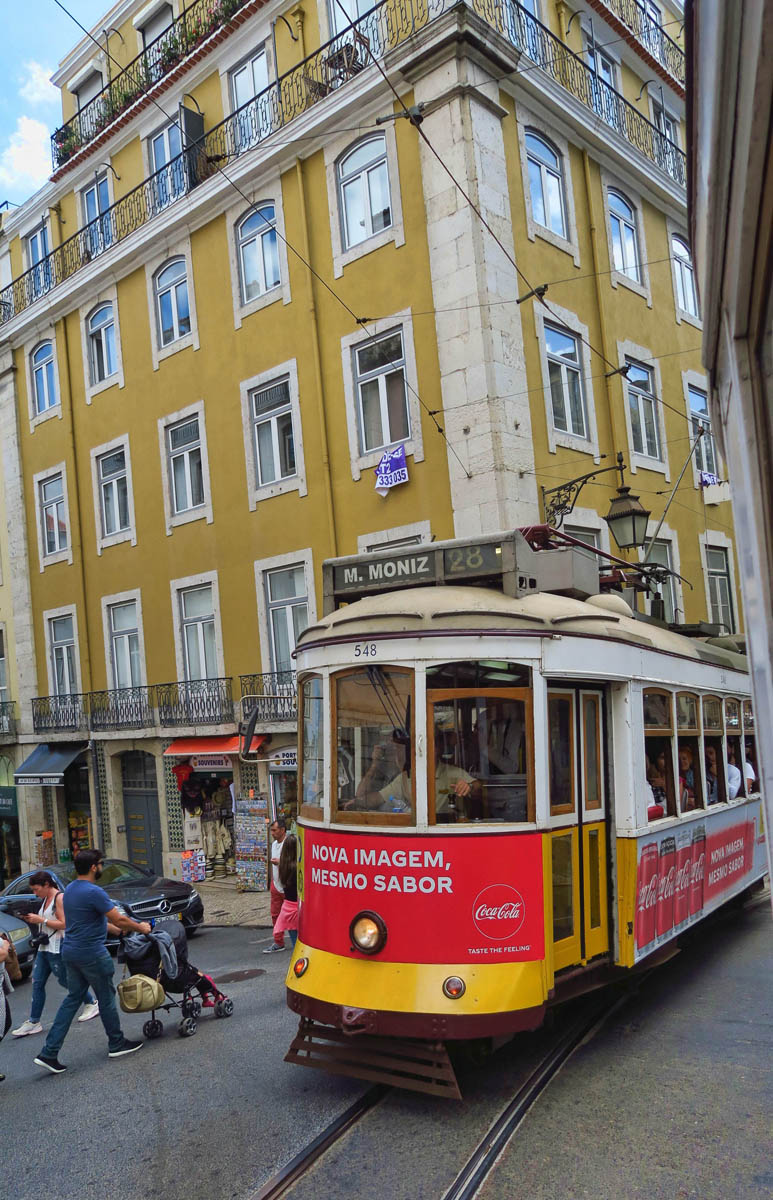 I set aside an entire day to ride this tram, as it’s a popular attraction. I want to be sure I can secure a seat by the windows that open, so I can snap photos along the way. While you can certainly “hop on and hop off,” the only way to guarantee a seat is to wait in line at the origin stop on either end, Martim Moniz or Campo Ourique. The way the queue works is that you stand in line if you want a seat, of which there are only 20 per tram. Once the seats are filled, the conductor shouts out to anyone who doesn’t mind standing, and they are allowed to board after the seats are filled. So the line moves pretty quickly.

It’s fun feeling the movements of the train as it jerks, sways, and rattles up the steepest of Lisbon’s hills. I decide to ride the route in its entirety first, sitting on the left side. Then I will go back and ride it again, sitting on the right side, but hopping off midway at some of the more notable viewpoints. 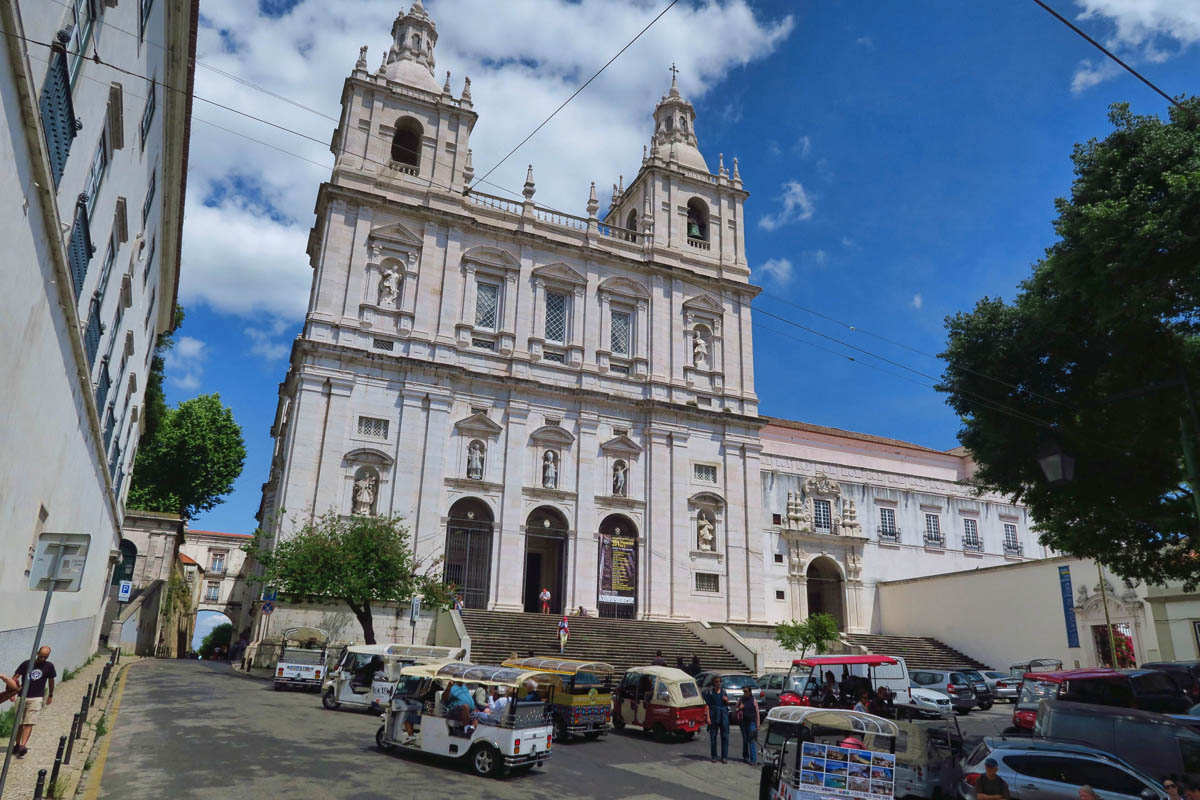 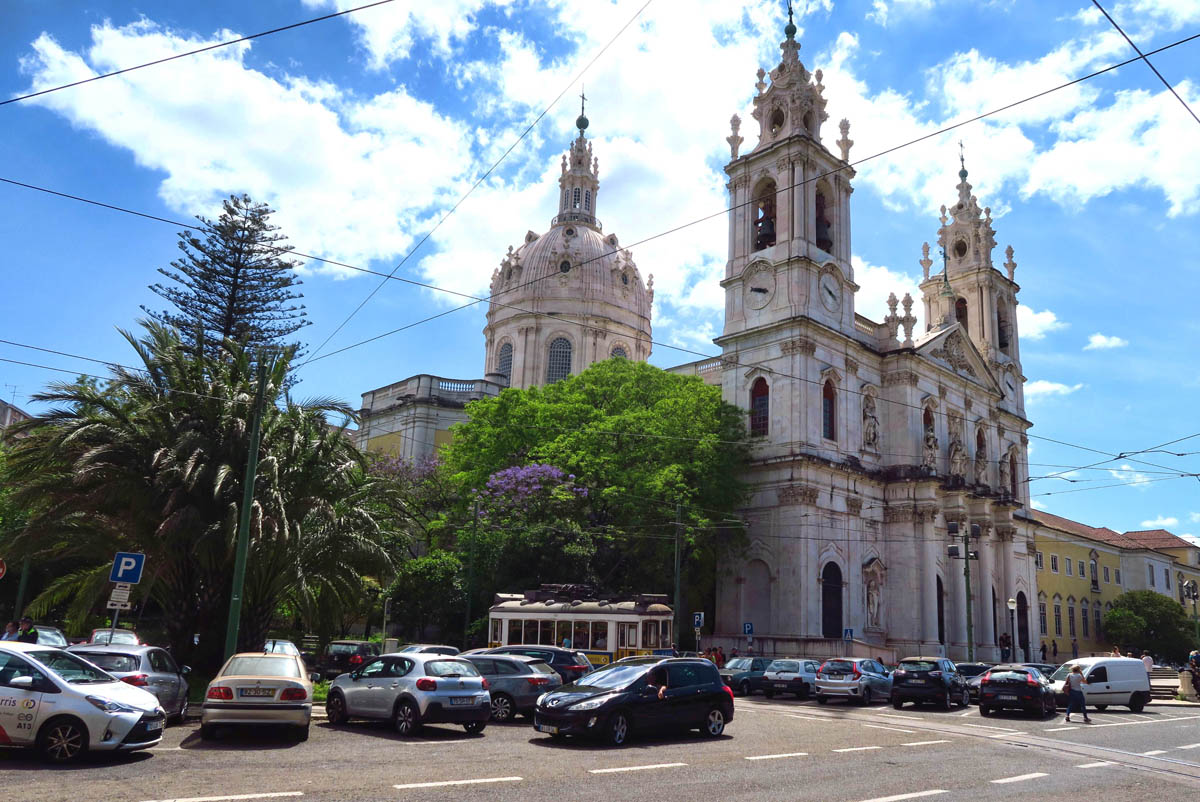 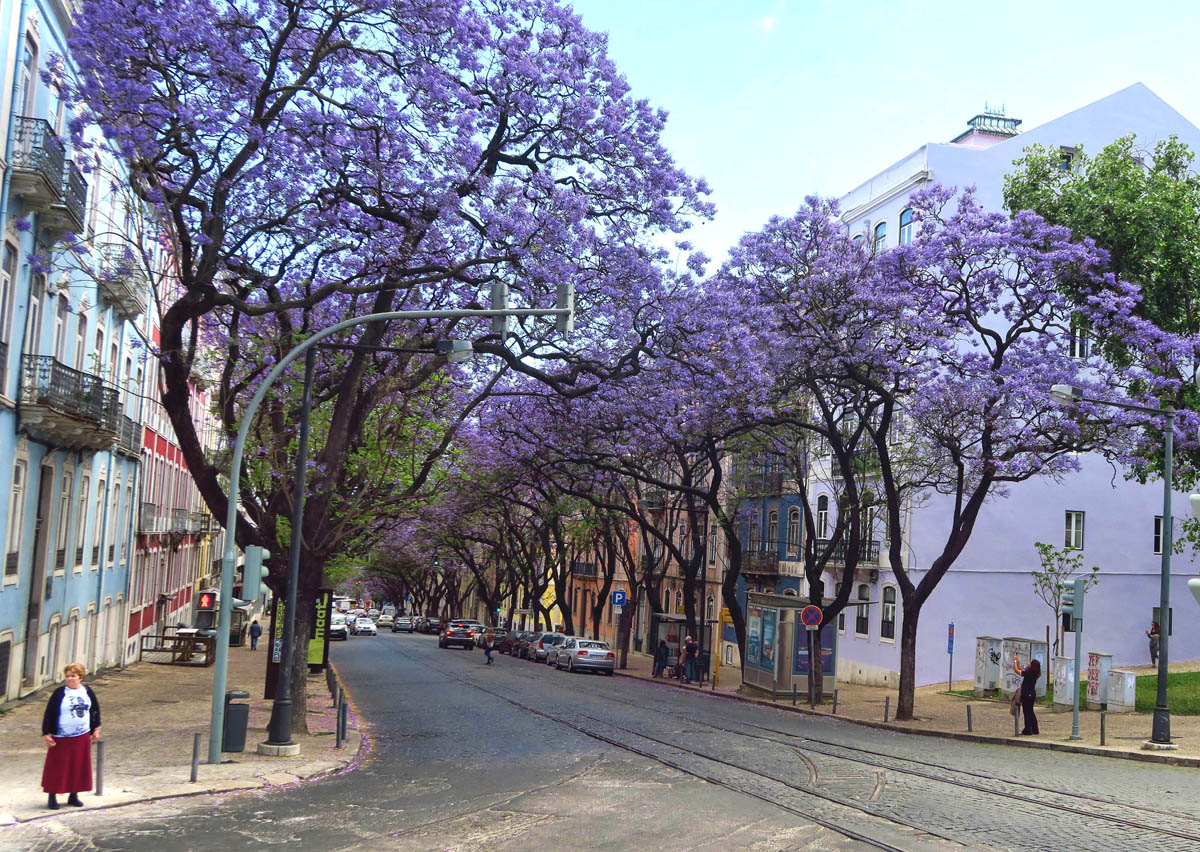 The beautiful Jacaranda trees are all in bloom. Snapped this photo from the tram window while waiting for the light to change.

The ubiquitous yellow and white tram is one of Lisbon’s most famous icons, showing up on postcards, posters, paintings, tee shirts and coffee mugs. So what makes it any different than the other tram lines that ply Lisbon’s hills?  The route of No. 28 travels through some of the most famous neighborhoods, passing by many historic churches including the cities’ most noteworthy cathedral.  It’s also the easiest way to get to the Alfama area, Lisbon’s oldest neighborhood, significant because it was one of the rare areas that survived the 1755 earthquake, leaving much of this older section intact. It is also the area with the greatest viewpoints, offering an opportunity for beautiful sweeping views out over the red-tile roofed city. 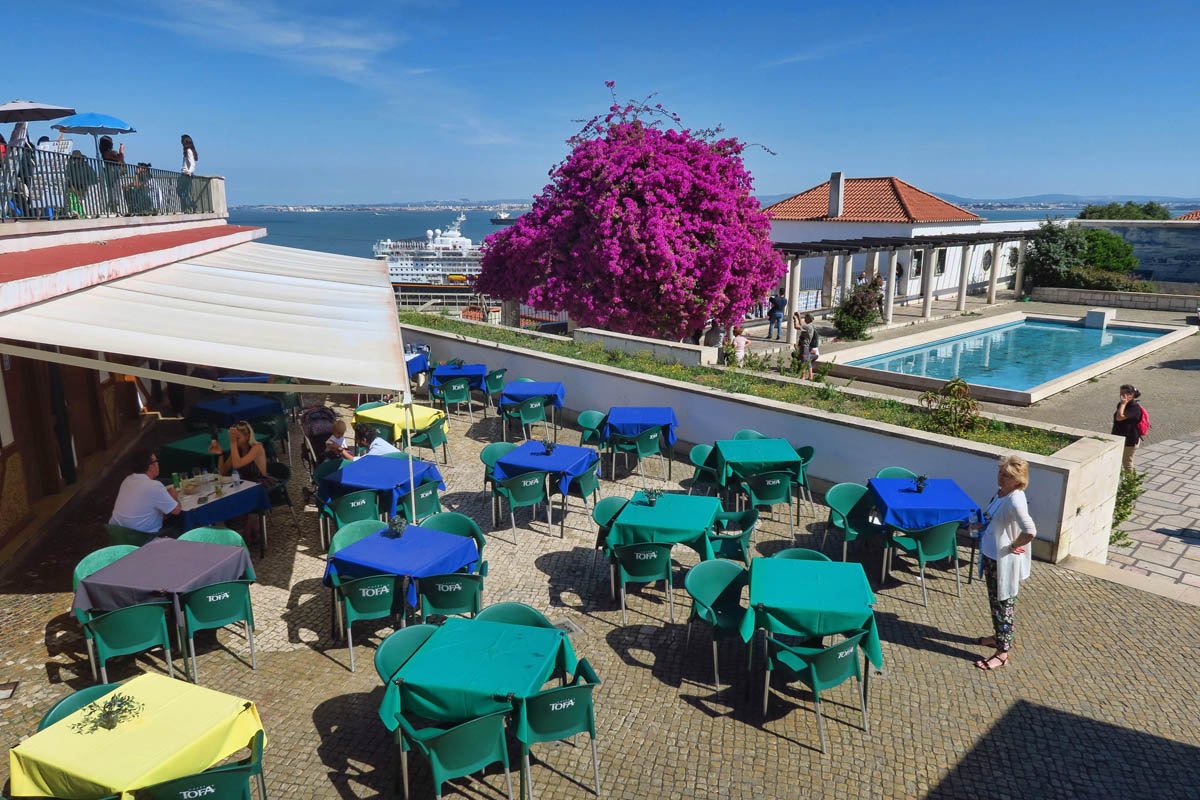 I get off in the Alfama neighborhood to have a look around. 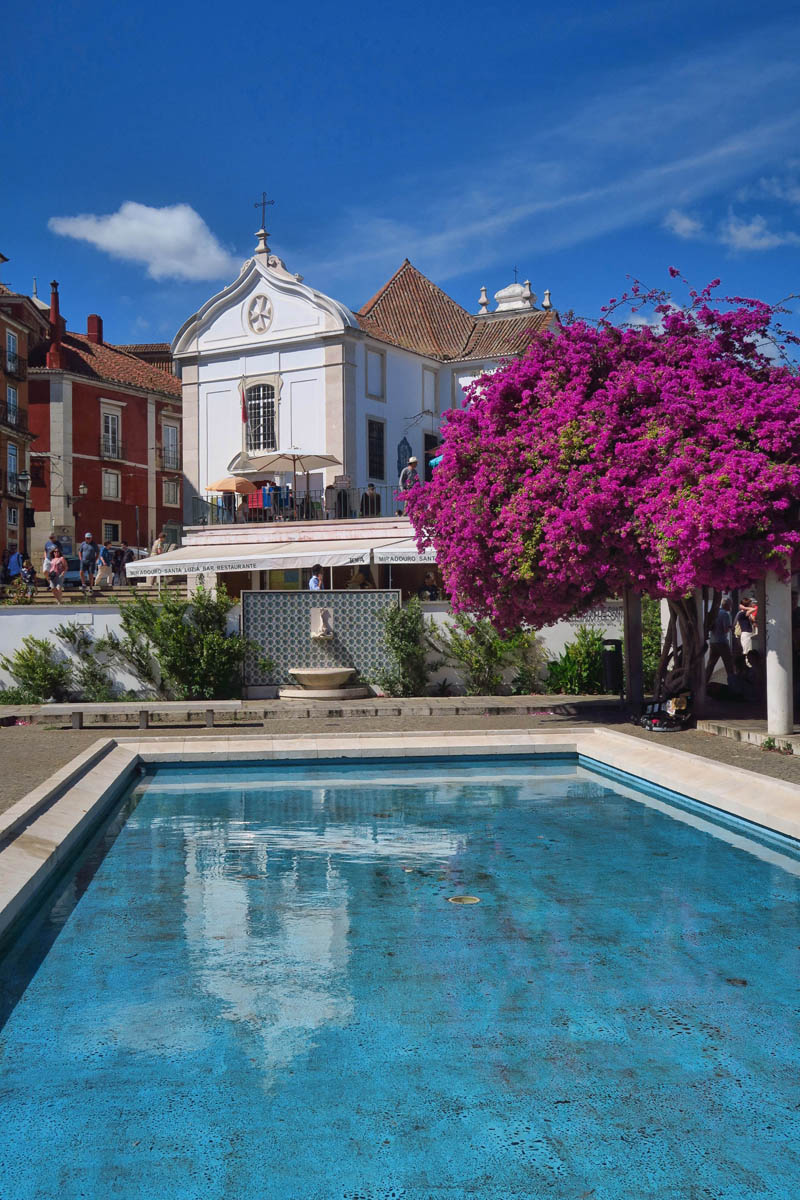 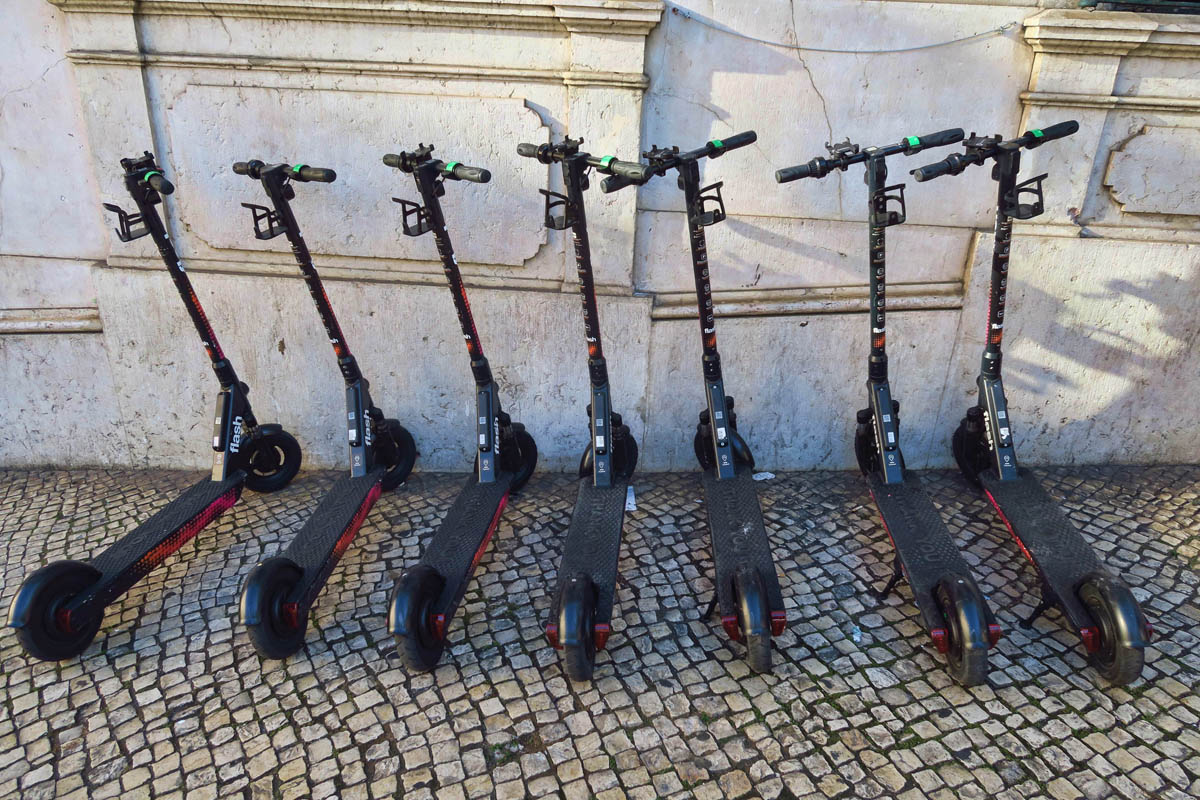 Probably the second most popular mode of transportation in Lisbon. There’s an app for that! 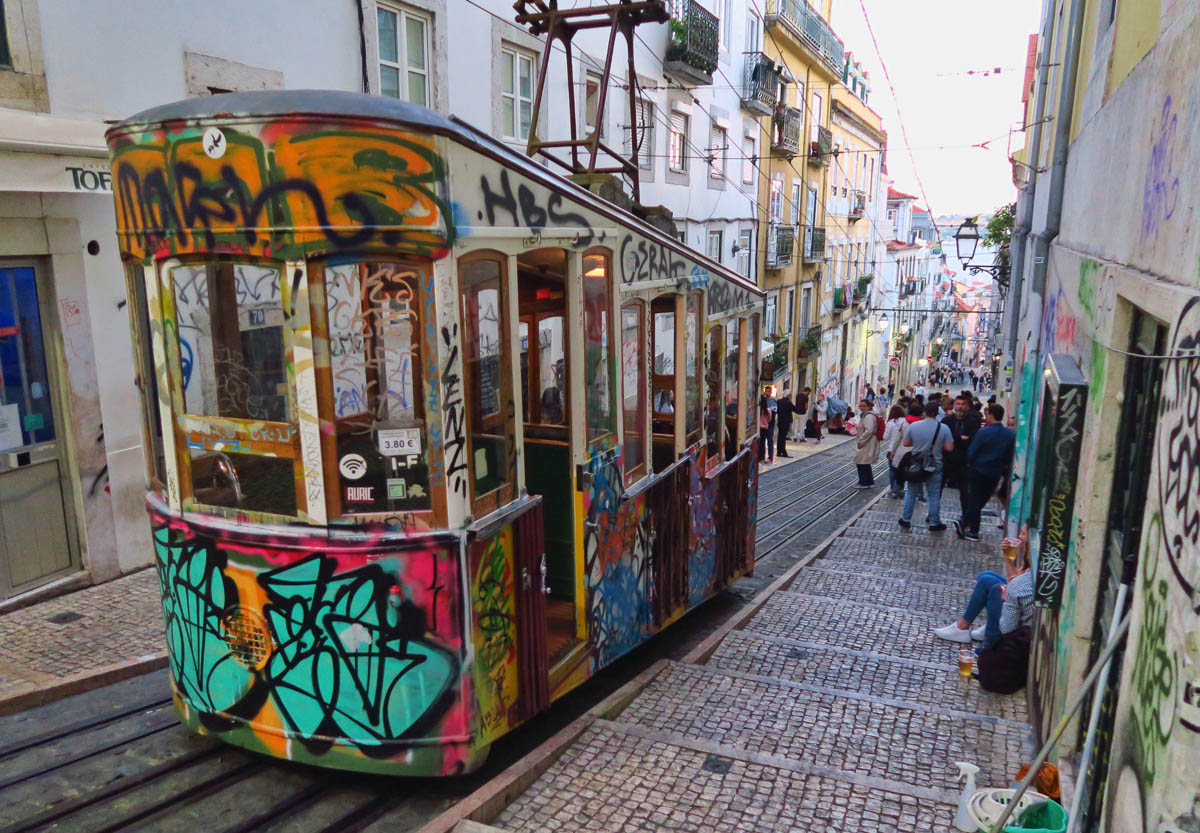 The funiculars in Lisbon, of which there are three, have been declared a national monument. Once run by rack rail and cable that was powered by a water counterweight system, then by steam power, and nowadays by electricity, they help ascend some of the steeper streets.

Since this tram is a part of the regular public transportation service also carrying local commuters, each time you hop off, you encounter a new fare when you hop back on again (including the end of the line.) So this is one case where the 24 hour unlimited ride Viva Viagem card for € 6.40 is a must. Since the tram is also used by local commuters, it’s good to follow local tram/bus etiquette, which is to enter through the front door, exit through the rear door. 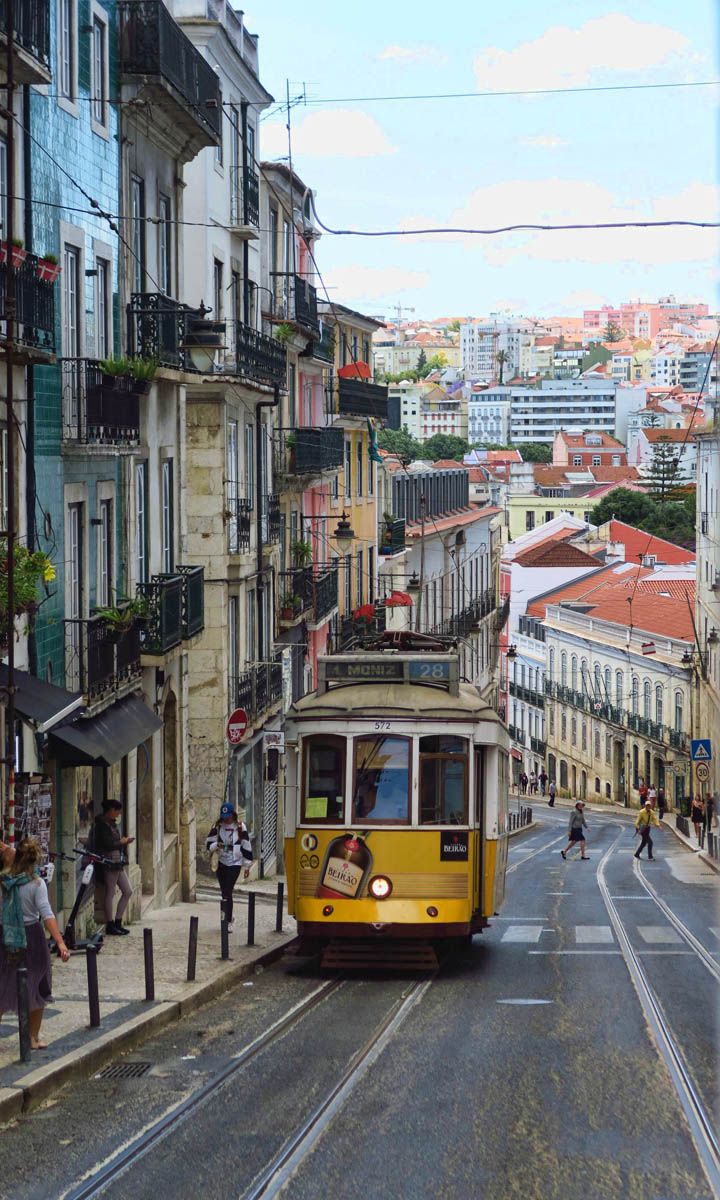 To show how conditioned we can become by commercials, I will never see this view without hearing in my head the jingle, “Rice-A-Roni, the San Francisco treat!” 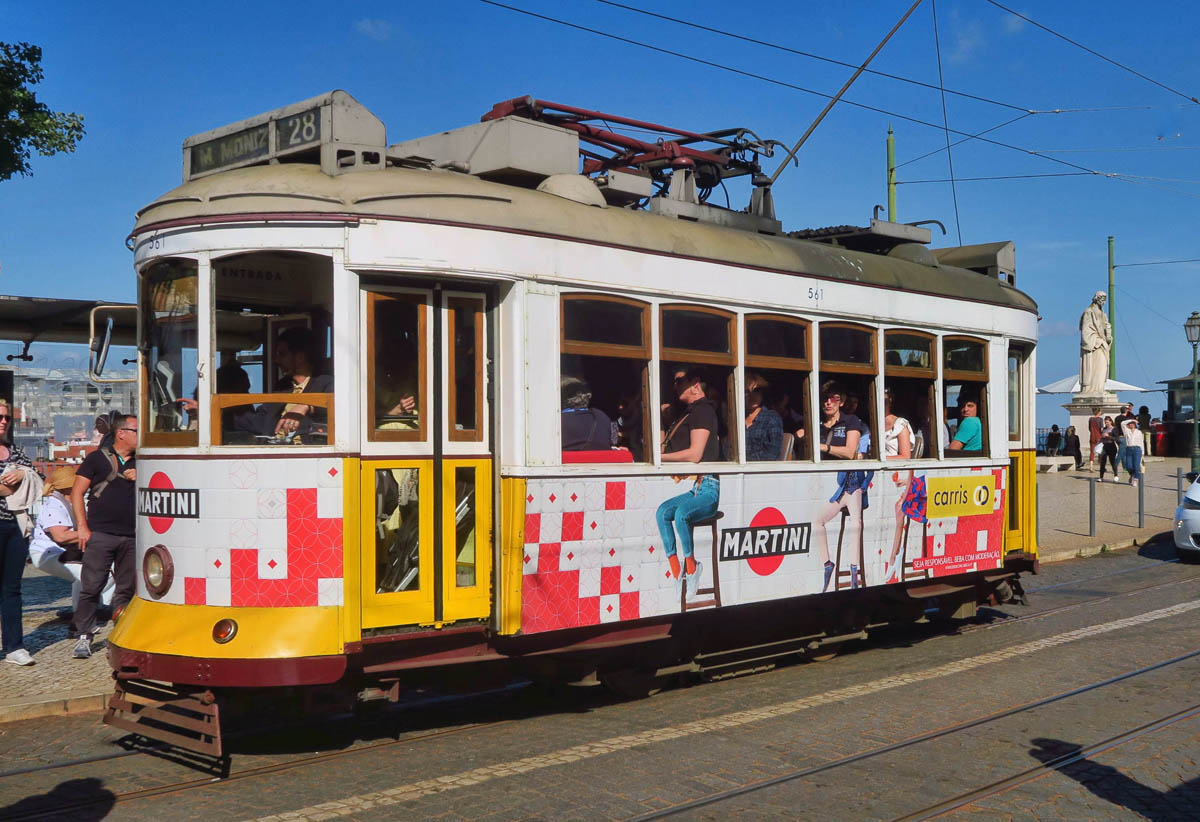 This advertisement for Martini cracks me up. Note how they have drawn the bottom half of people to look like they are sitting on bar stools. If I’d only been a few feet further back, these people would have all lined up perfectly. 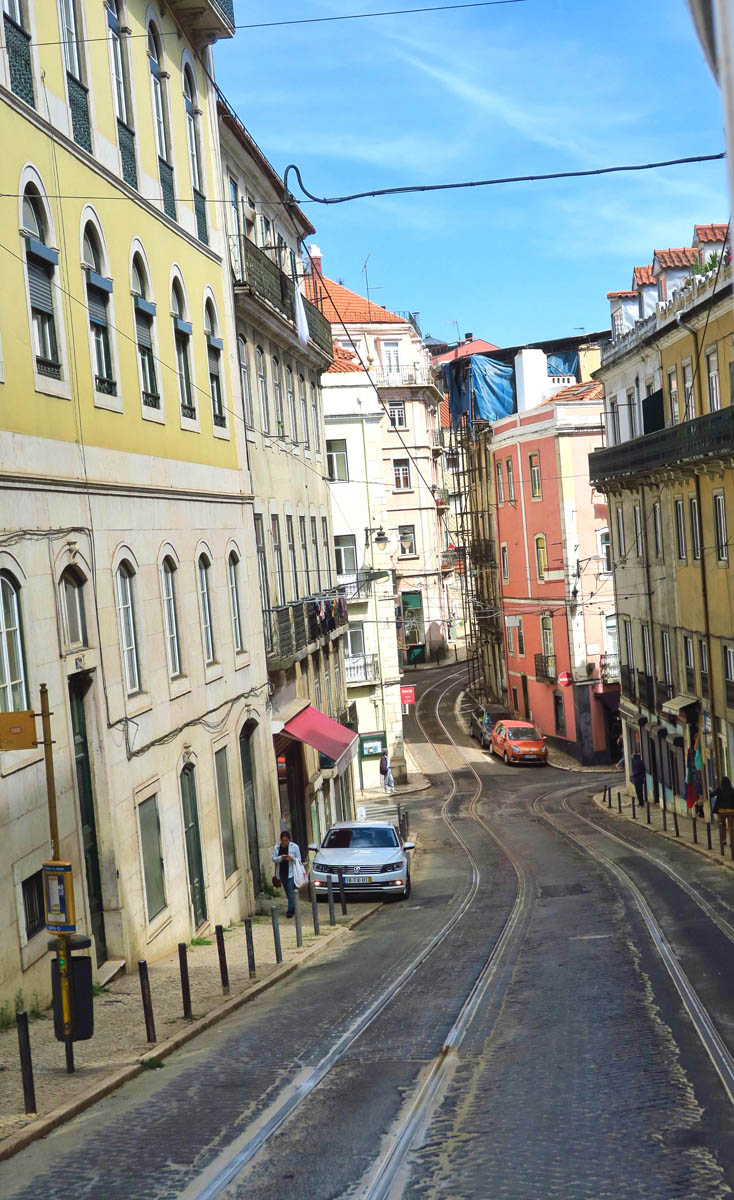 Some of the rails twist and turn to make it through the more narrow streets. 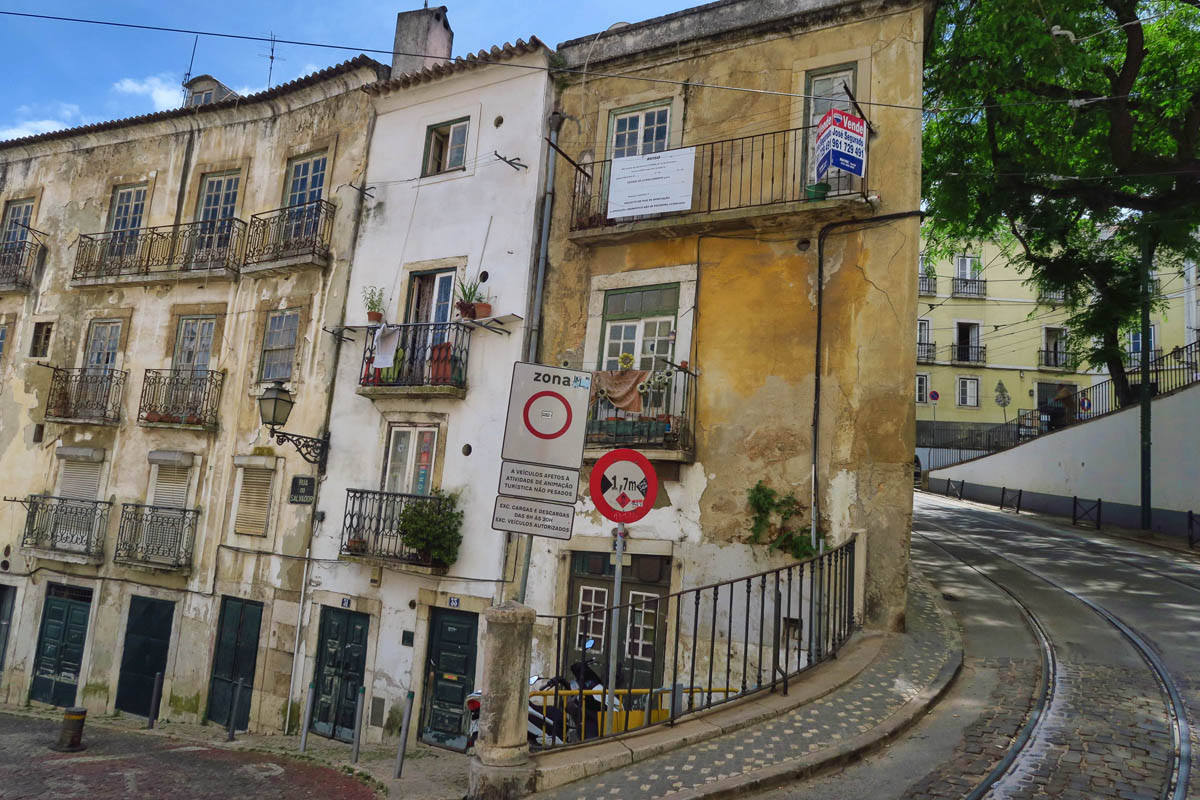 Another alternative to the 24 hour Viva Viagem card is the Lisboa Card, which is a 24 hour tourist pass for €20. The more days you purchase, the more the price drops. The two-day Lisboa Card drops to €17 per day, while the three-day pass is only €14. But I will add to choose wisely here. If you are going to ride the tram all day with no museums or monument fees required, this is NOT a good deal. The Lisboa Card only pays when you are visiting enough attractions to warrant the price, so it requires a little homework to determine whether it’s a good deal based on your chosen itinerary. One real benefit of the Lisboa Card in addition to transportation and entrance fees being included, it offers a “Jump the Queue” option at certain museums. No need to wait in line to have your ticket checked if the attraction has one of the “zapping” machines in use. The one place I found this really helpful was touring the nearby attractions in Belem. (More on that in a later post.) 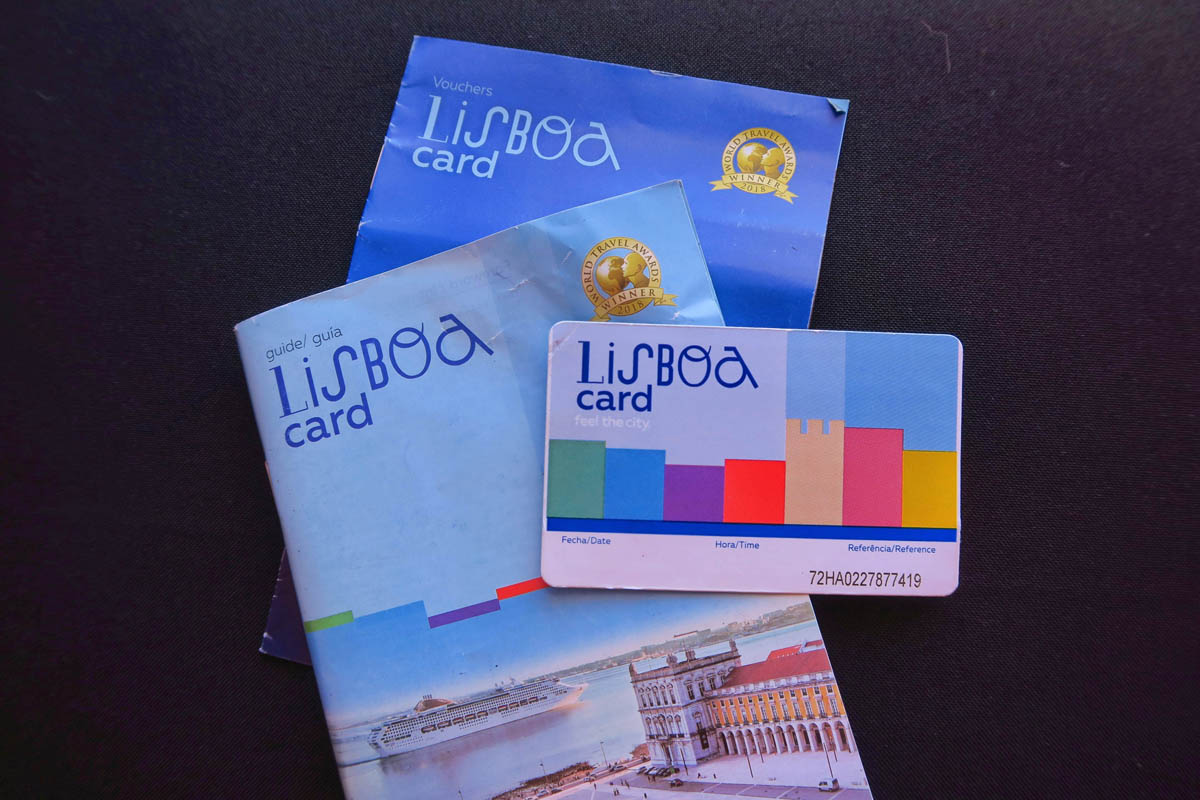 The Lisboa Card — Do your homework before buying to make sure you will visit enough attractions in one day to justify the price.

And while we are on the subject of cards, staying online is vital to having a map to navigate Lisbon’s crazy, curvy streets that change names from one end to the other. SIM cards are cheap in Portugal, with MEO offering the best service. Cards can be purchased in 1GB or 3GB. In Portugal’s case, it’s cheaper to just buy a new card rather than reload if you don’t need a consistent phone number. Prices do vary, ranging from €2 to €3 per GB. Since I only use the phone for map data, checking emails and Google search, I find 1GB lasts me about a week and a half to two weeks. 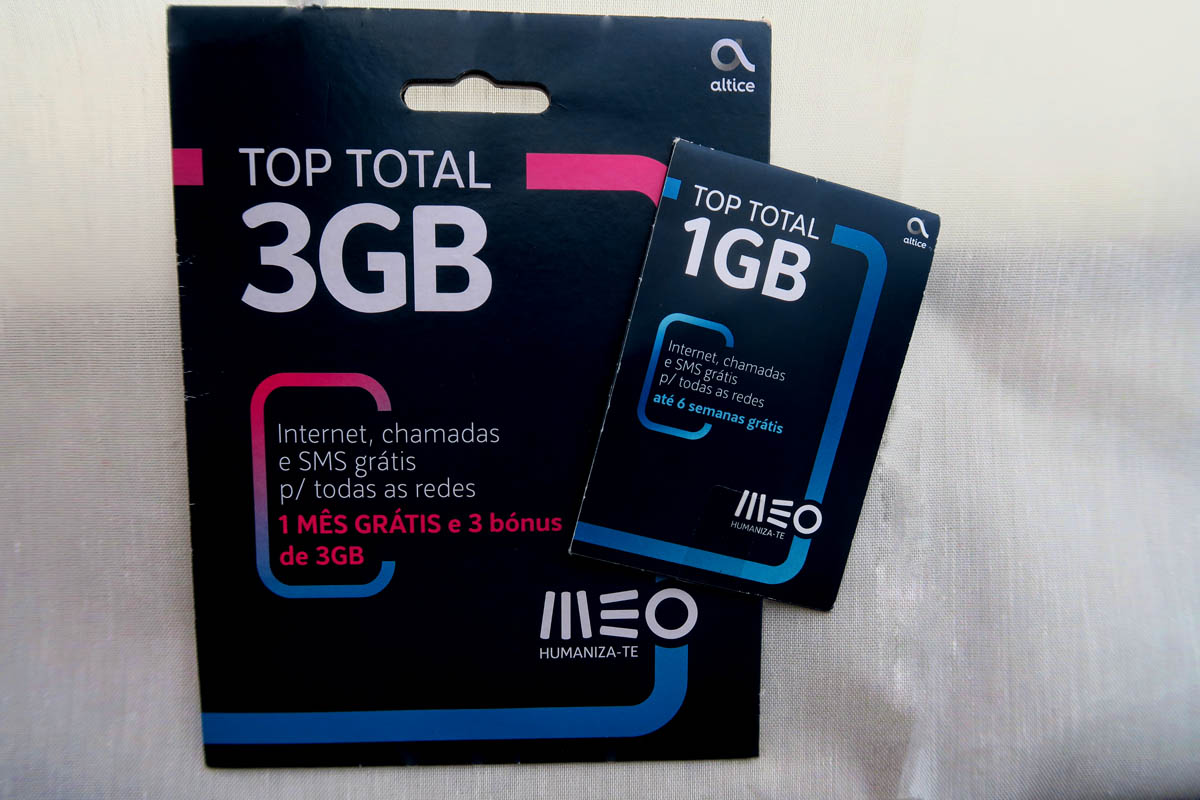 While there are several providers, MEO is reputed to have the best coverage.

Next up, I will share some of the “Monuments and Miradors” seen along the route.