Up to this point, attempts at visiting Portugal’s many lighthouses have proven to be frustrating. Either I am there on the wrong day, or at the wrong time. Those few that I have found accessible to the public are usually only open Wednesday afternoons from 2:00pm to 5:00pm, a time frame I can’t seem to hit no matter how hard I try. But most of them are located behind locked gates, chain link fences, and appear to be unmanned. Until, that is, I reached Cascais.

Just an hour north of Lisbon via the commuter rail line is the seaside town of Cascais. Like all names in Portuguese that end in the letter “s,” it is pronounced with an “sh” instead, like “Cas-KIESH.” 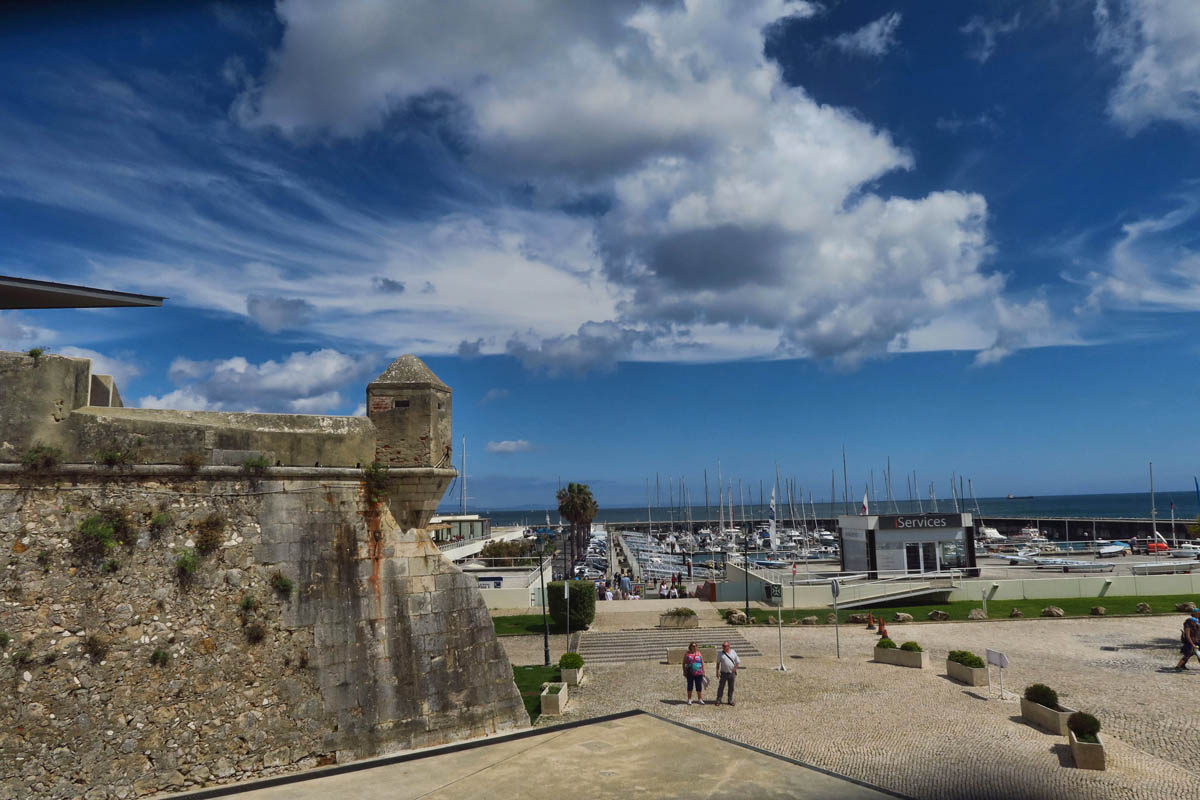 So many of Portugal’s coastal towns have old fortress walls along their shore. 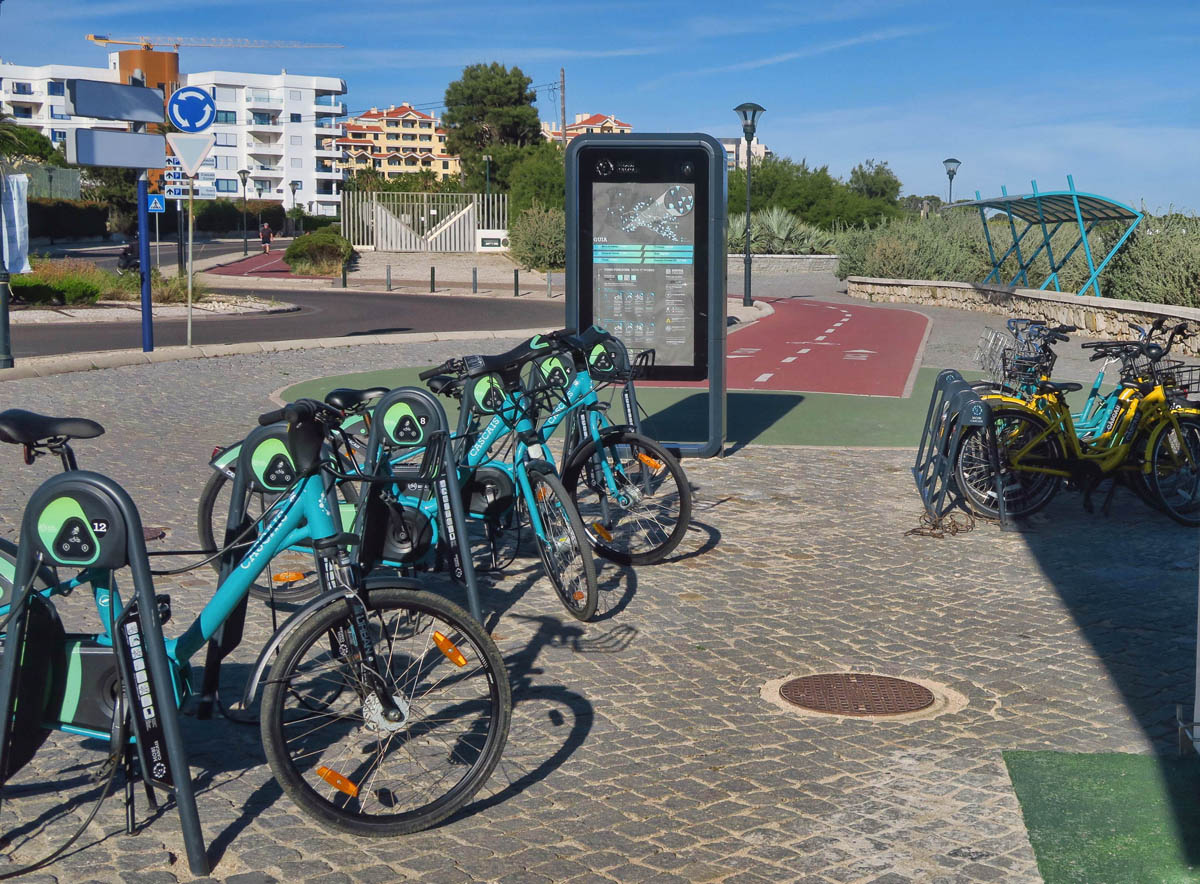 Cascais has a really nice walk/bike trail that follows the coastline. 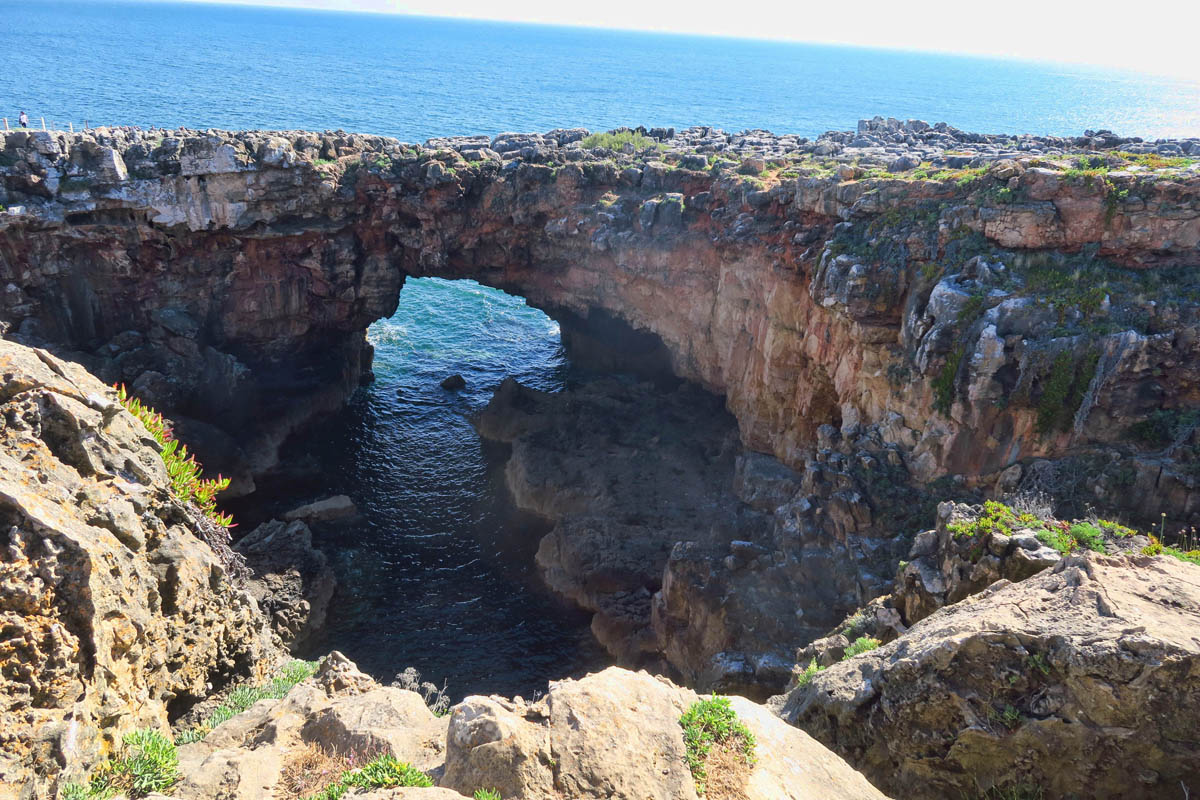 Lots of scenic spots to stop along the walk/bike path. 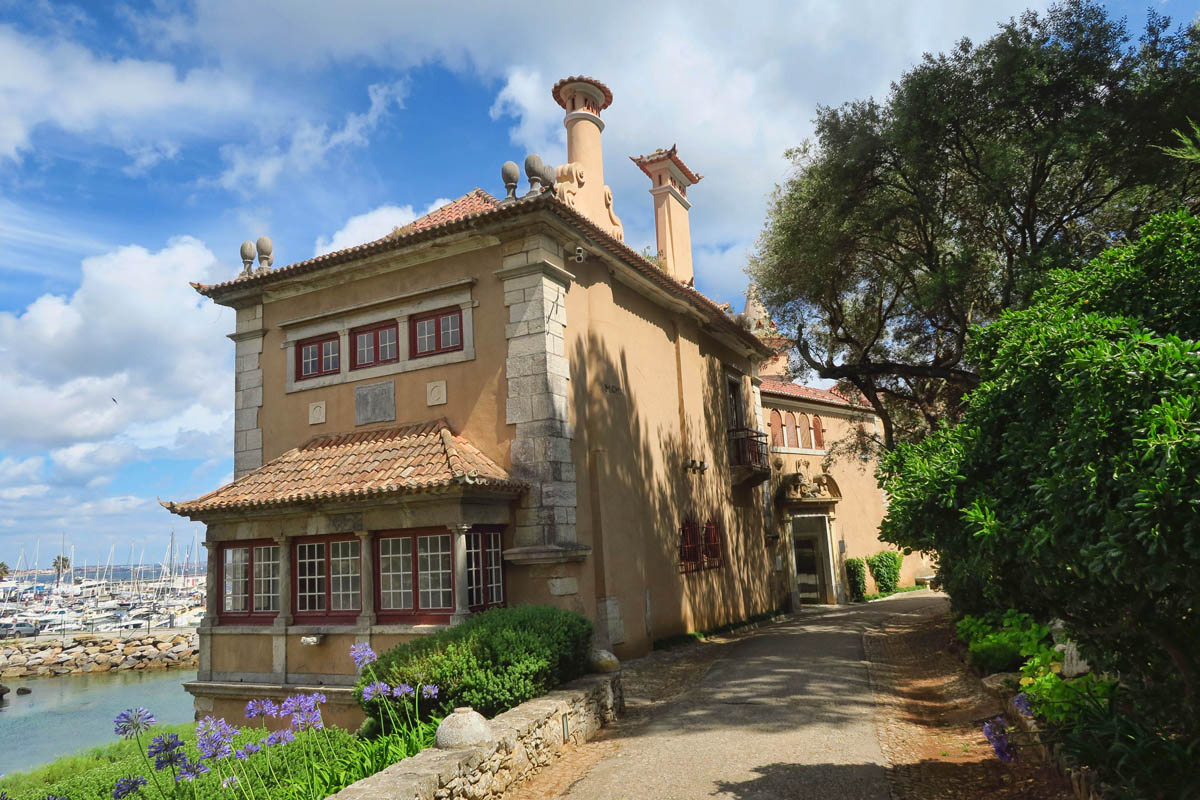 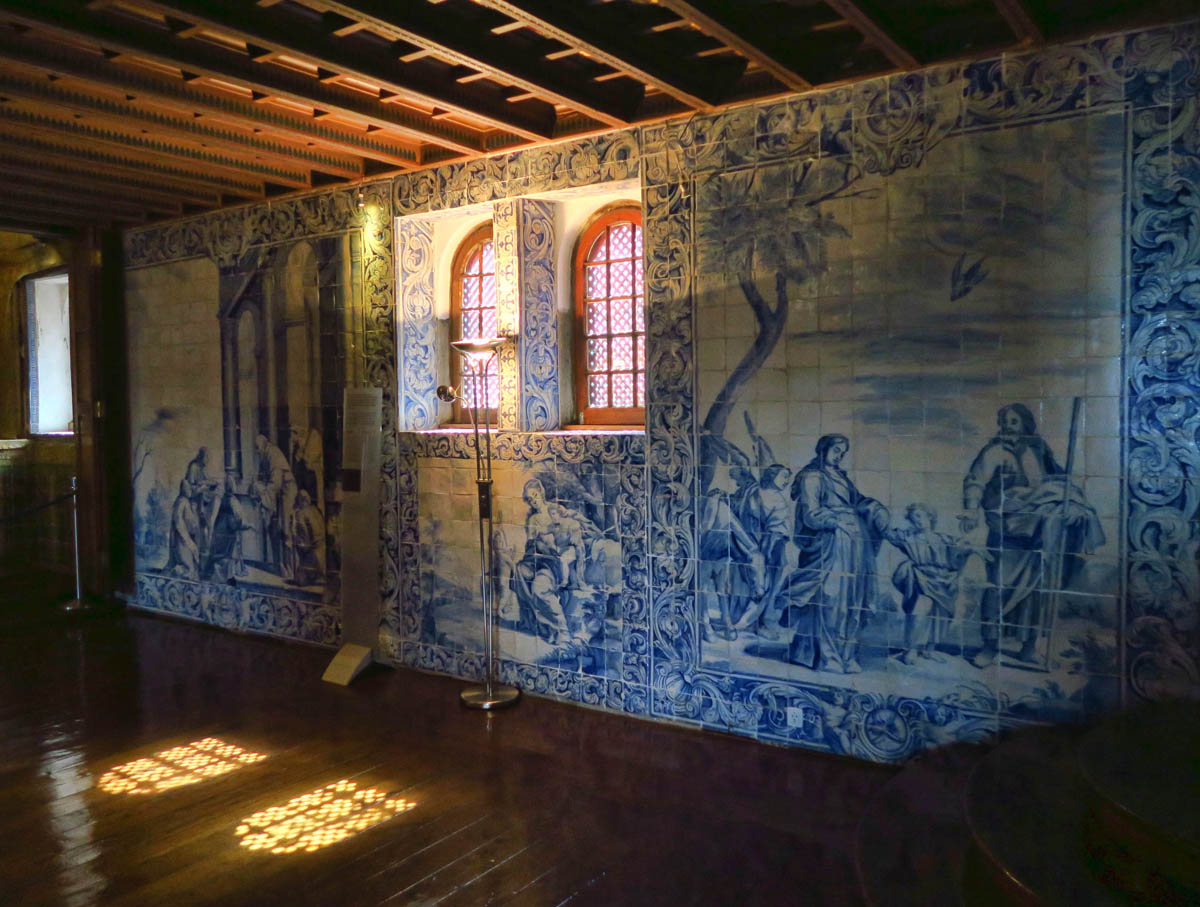 This summer mansion even has its own chapel inside, complete with blue and white tiles, or Azuelos. 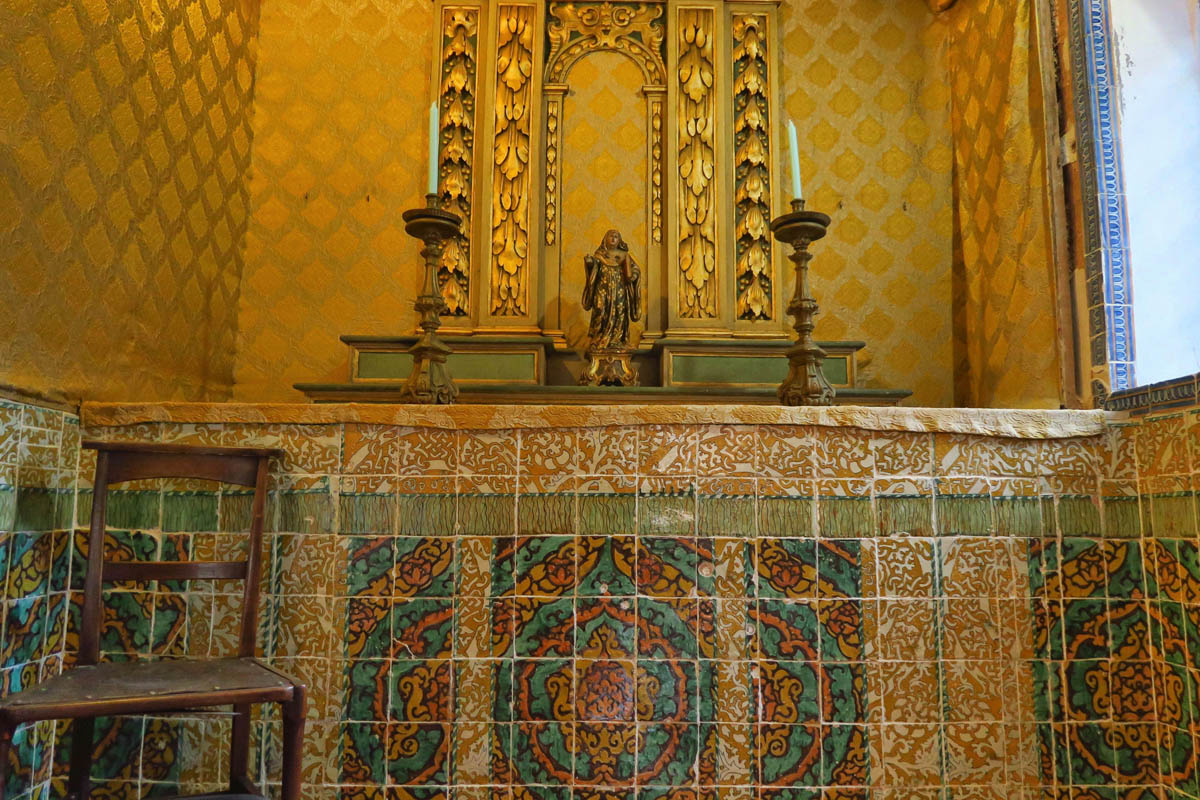 The main altar of the chapel is covered in Talavera tile from the end of the 16th century.

Situated along what is known as the Portuguese Rivera, Cascais is one of the most affluent areas of Portugal with summer mansions wedged in between low cliffs and sandy coves. Once the summer playground of the Portuguese Royal Family in the late 19th century, Cascais continues to be a playground to the rich and famous. It’s also home to the largest casino in Europe, Casino Estoril, which served as inspiration for Ian Fleming’s 007 film, “Casino Royale.”

Cascais is also home to three of Portugal’s most prominent and significant lighthouses lined up along the coast. Of these three significant landmarks, only the Santa Marta Lighthouse in the heart of the town of Cascais is open for tours. In fact, it goes way beyond basic lighthouse function, not only allowing tours to the top of the tower, but it even includes a lighthouse museum! 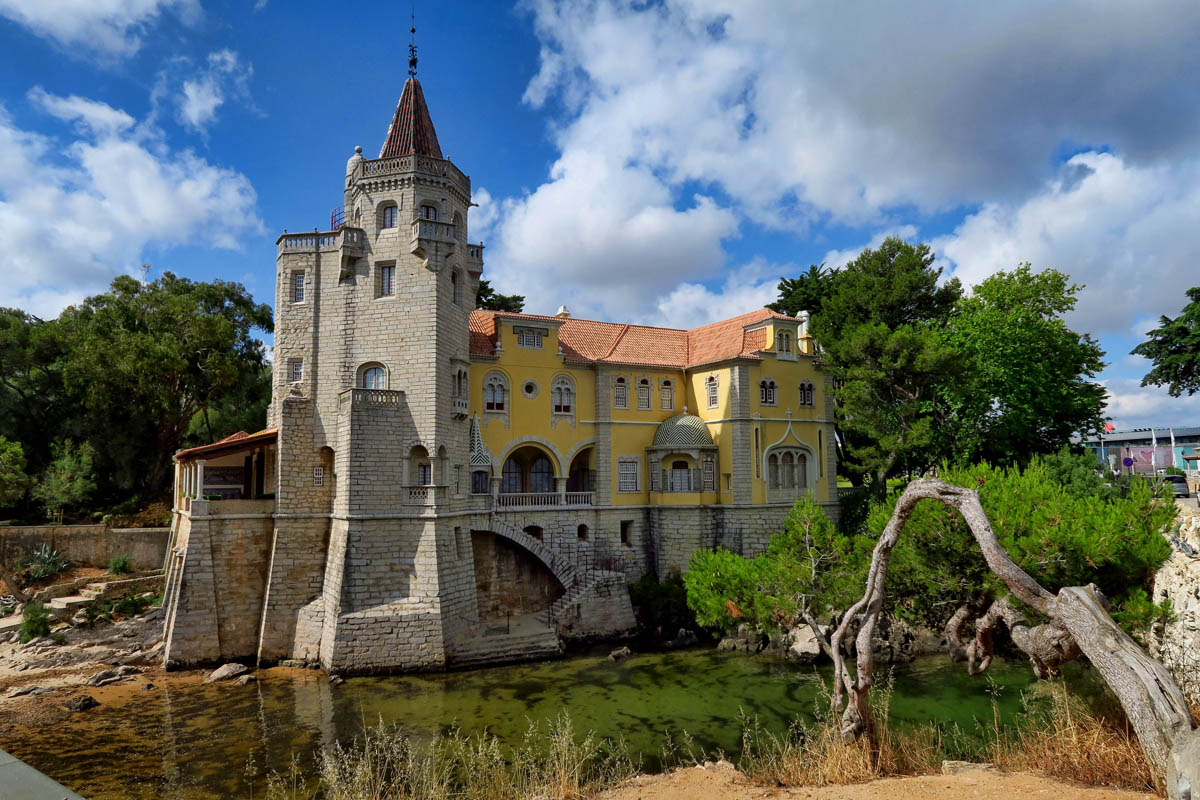 Some of the mansions in Cascais look more like they belong in Disneyland. 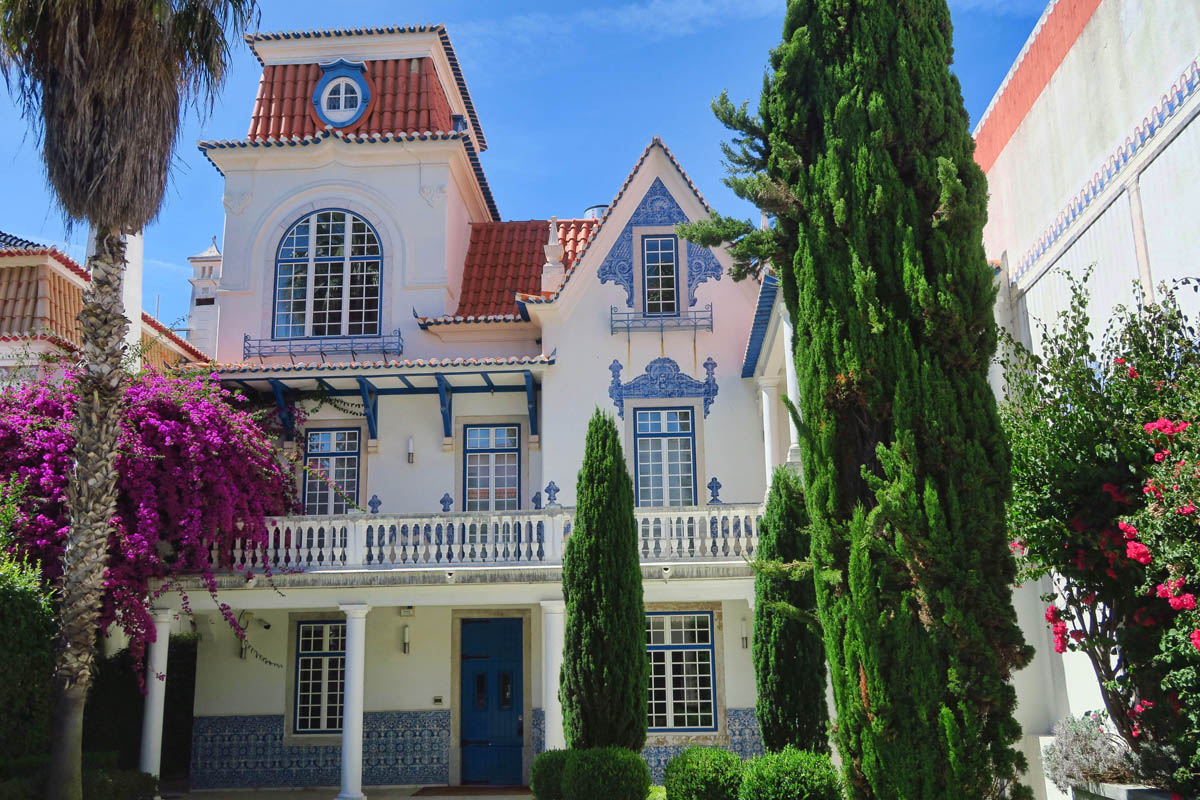 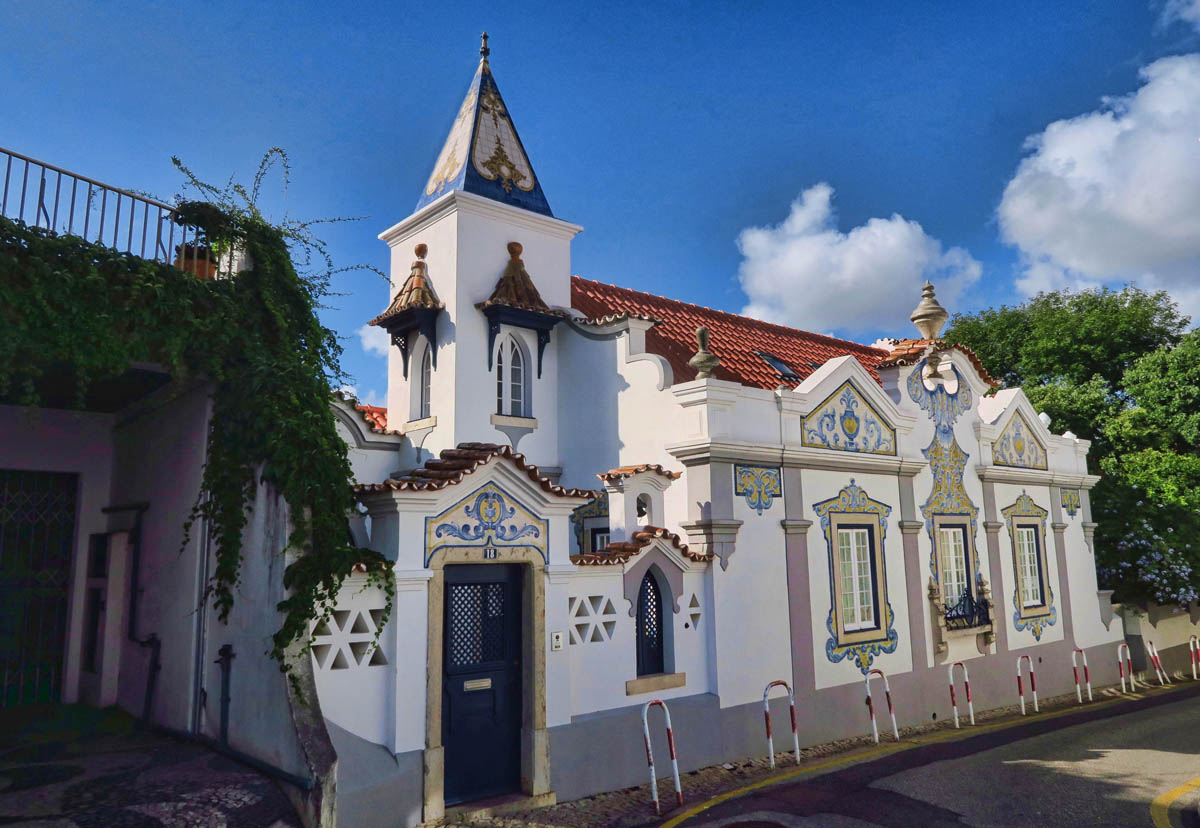 Being so close to the mouth of the Tagus River near the port of Lisbon, at one time the head of an enormous sea-going empire and main departure point for trade routes, these navigational aids have been helping sailors avoid dangers and find paths to safe harbor for well over a century. But they haven’t yet achieved “tourist attraction status” like those along the east and west coasts of the USA. So it’s a real treat to finally find a lighthouse with a welcome mat! 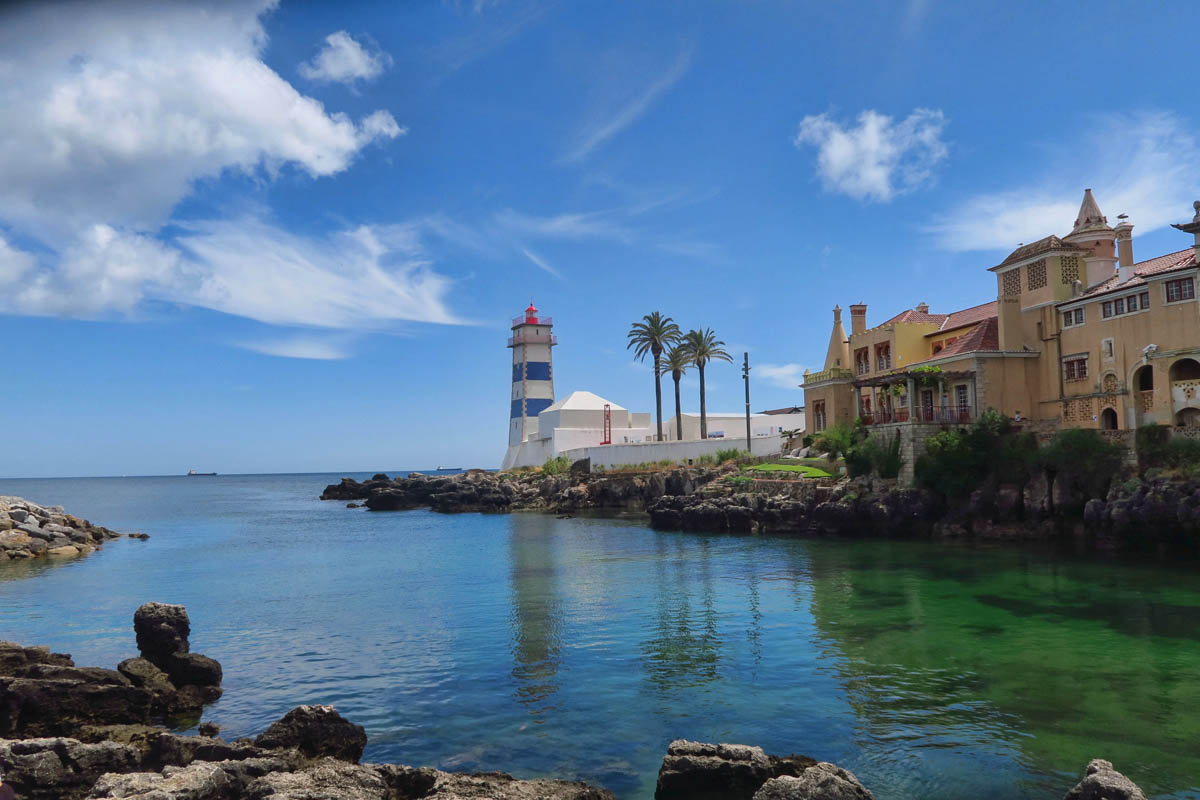 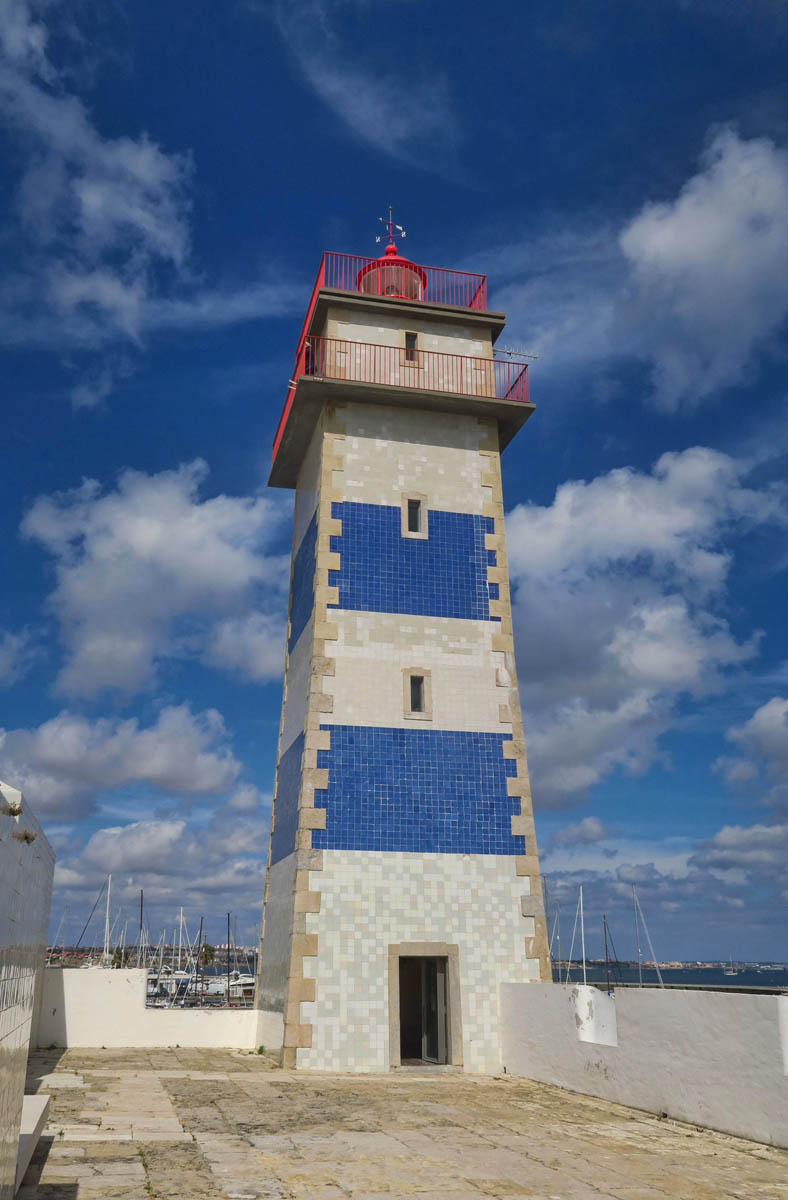 The blue and white tiled lighthouse was inaugurated in 1868, built on a platform of an old coastal fort. Its purpose it two-fold, as it not only lights up the navigational corridor of the northern Tagus Sandbar into the port of Lisbon, but also signals shelter offered by Cascais harbor. 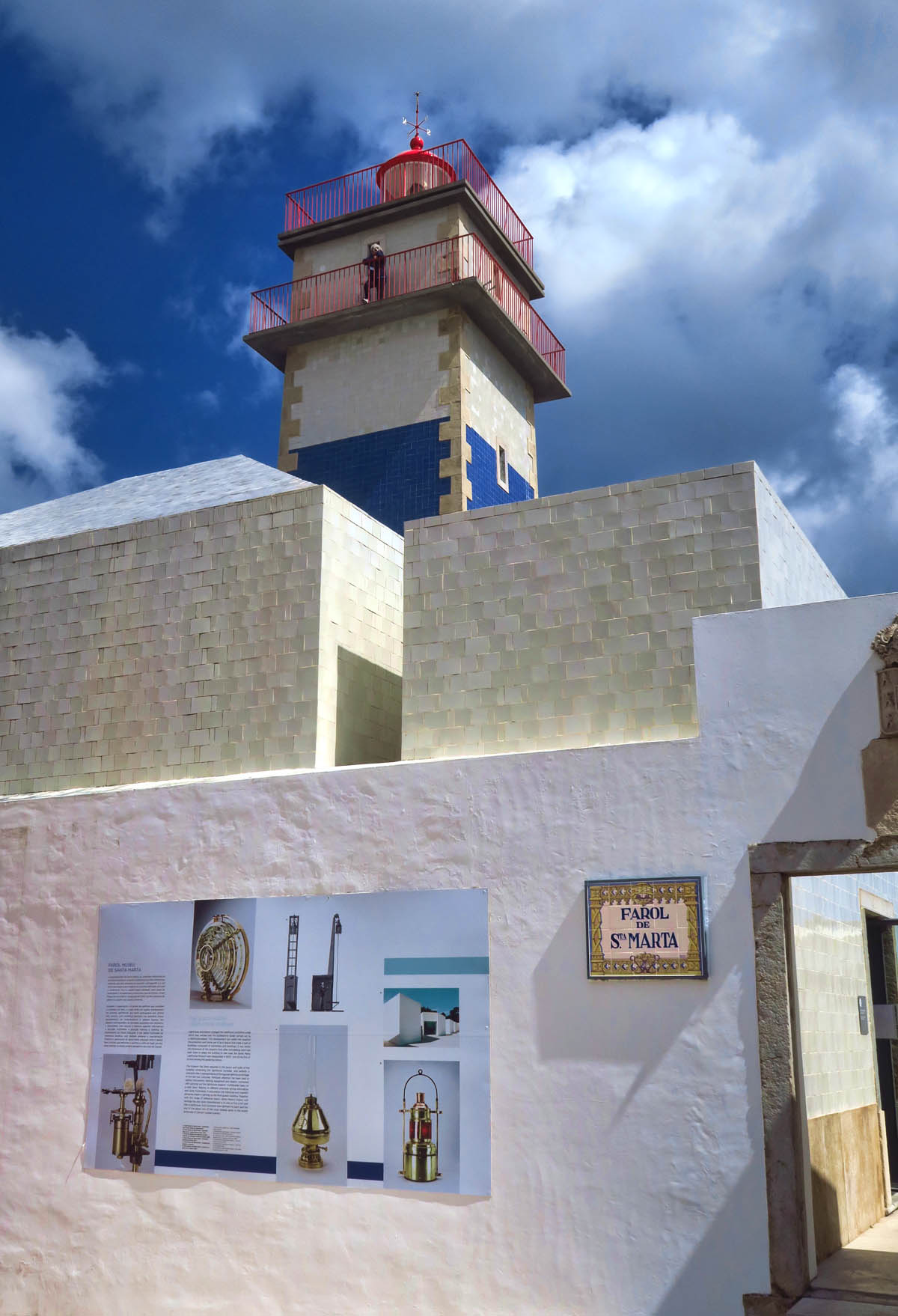 The installations of the old fort (powder magazine and barracks) were repurposed as residential quarters for lighthouse keepers, and now serve as a museum. 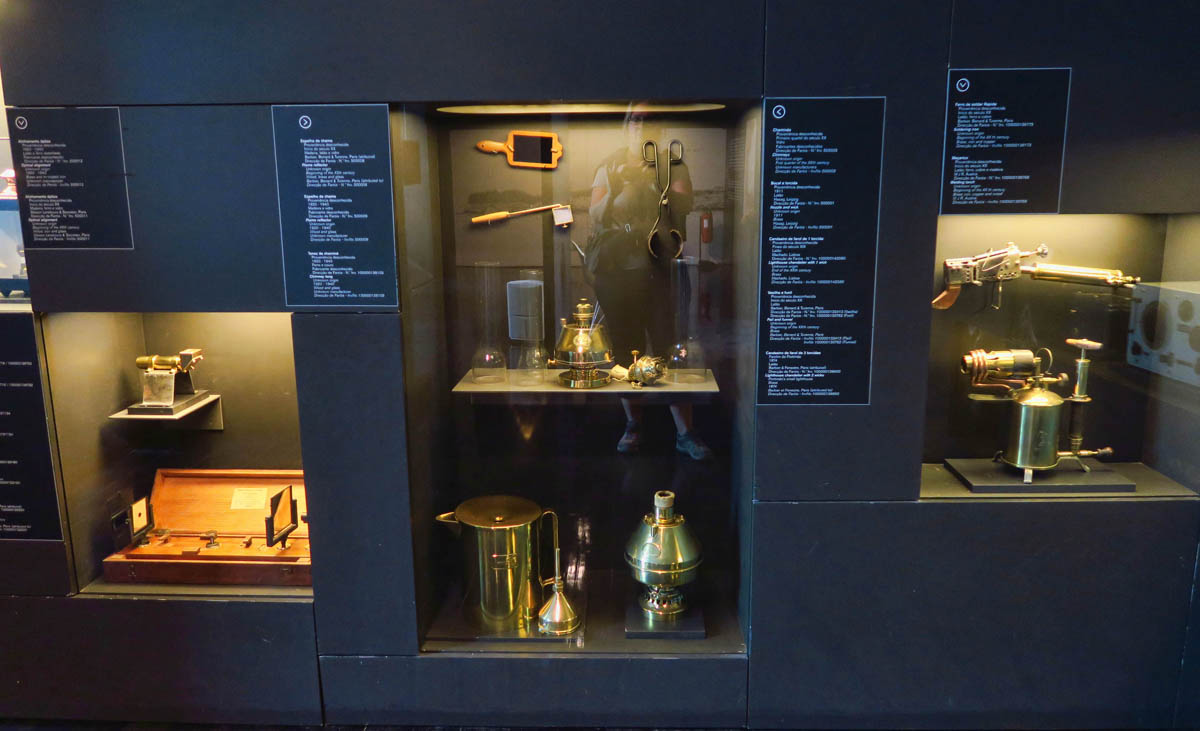 The museum was added in 2007, containing artifacts like the first lighthouse lamp, oil pails and funnels, flame reflectors dating back to 1874. And all exhibits are subtitled in English! 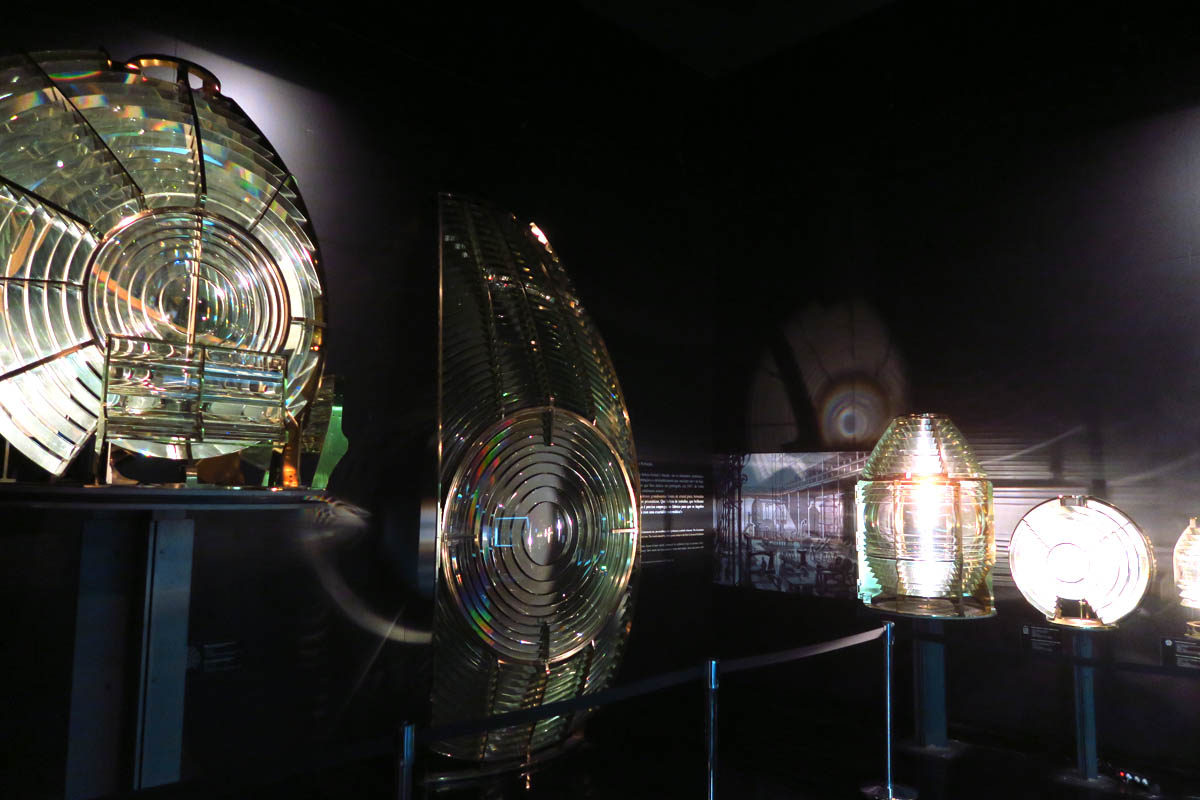 The museum houses an impressive collection of Fresnel lenses, including one of three “hyper-radiant” panels (largest) made in 1897 removed from the Berlengas Lighthouse following automation. 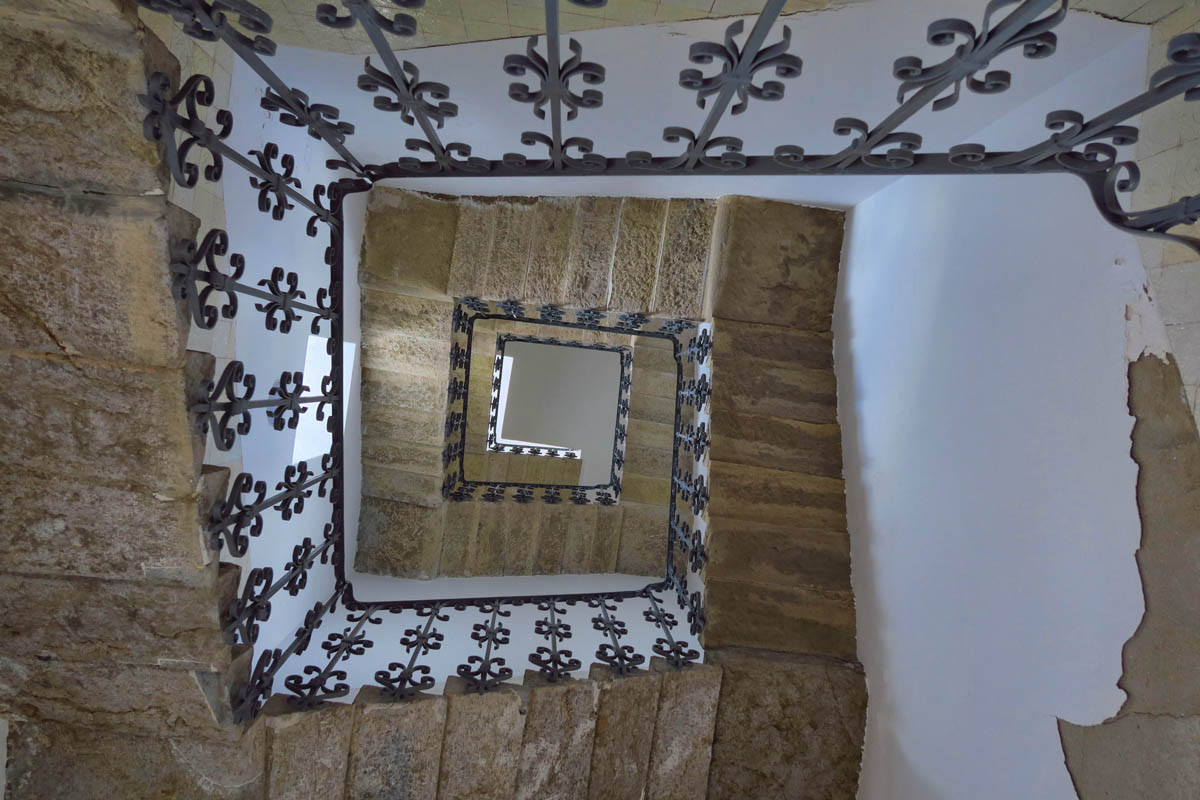 Interesting staircase lines the walls of the four-sided structure. 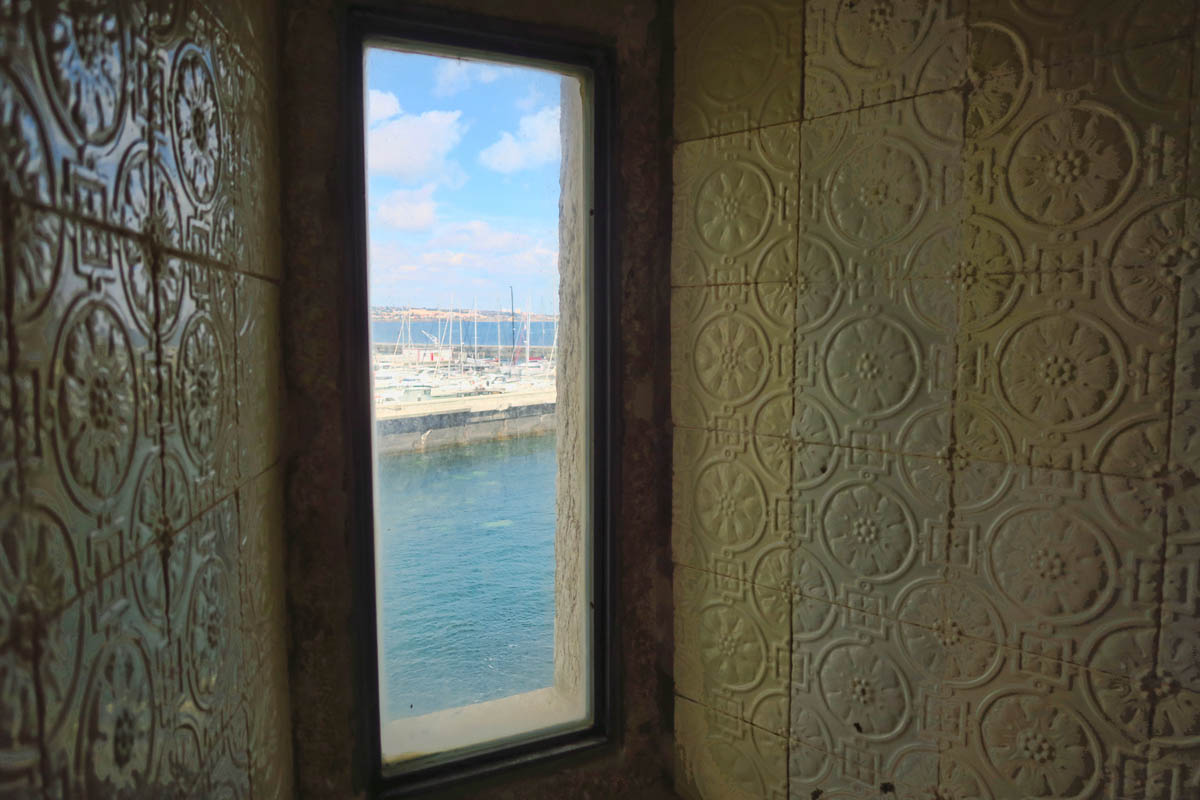 Beautiful embossed tiles line the inside walls of the stairwell. 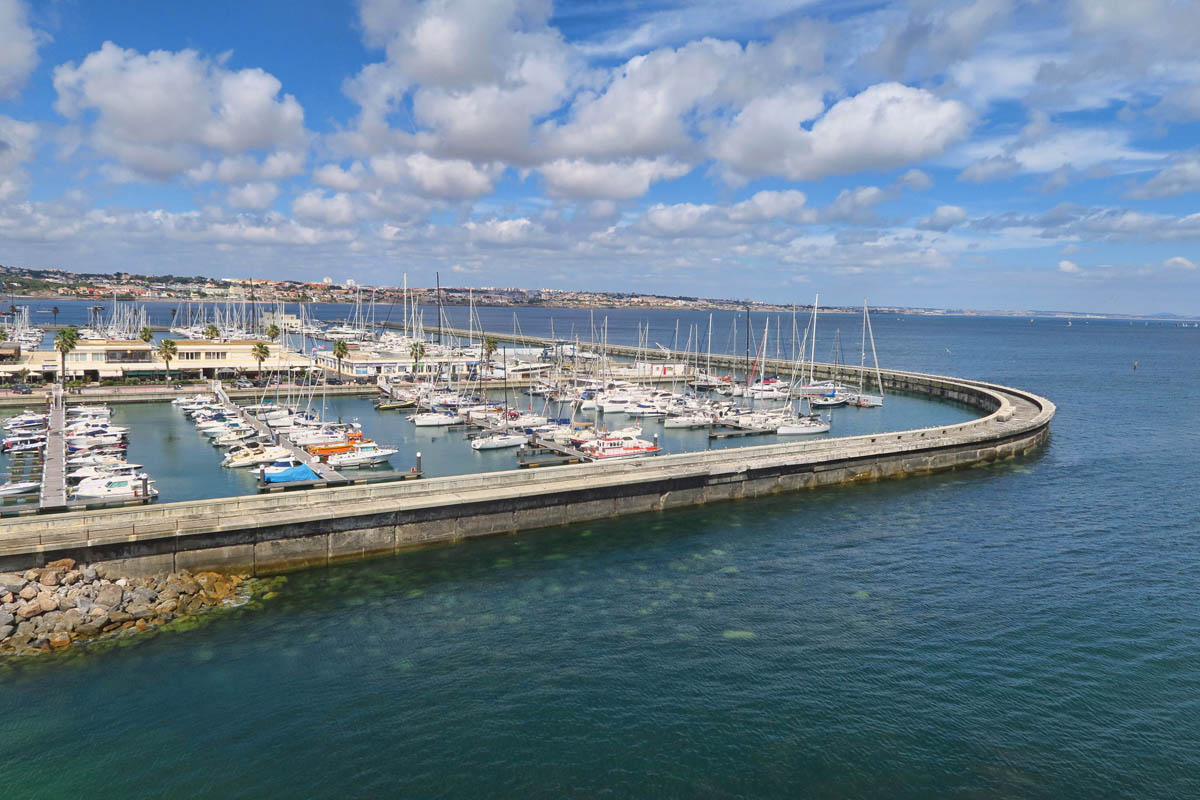 View from the top offers a beautiful view of the marina in one direction. 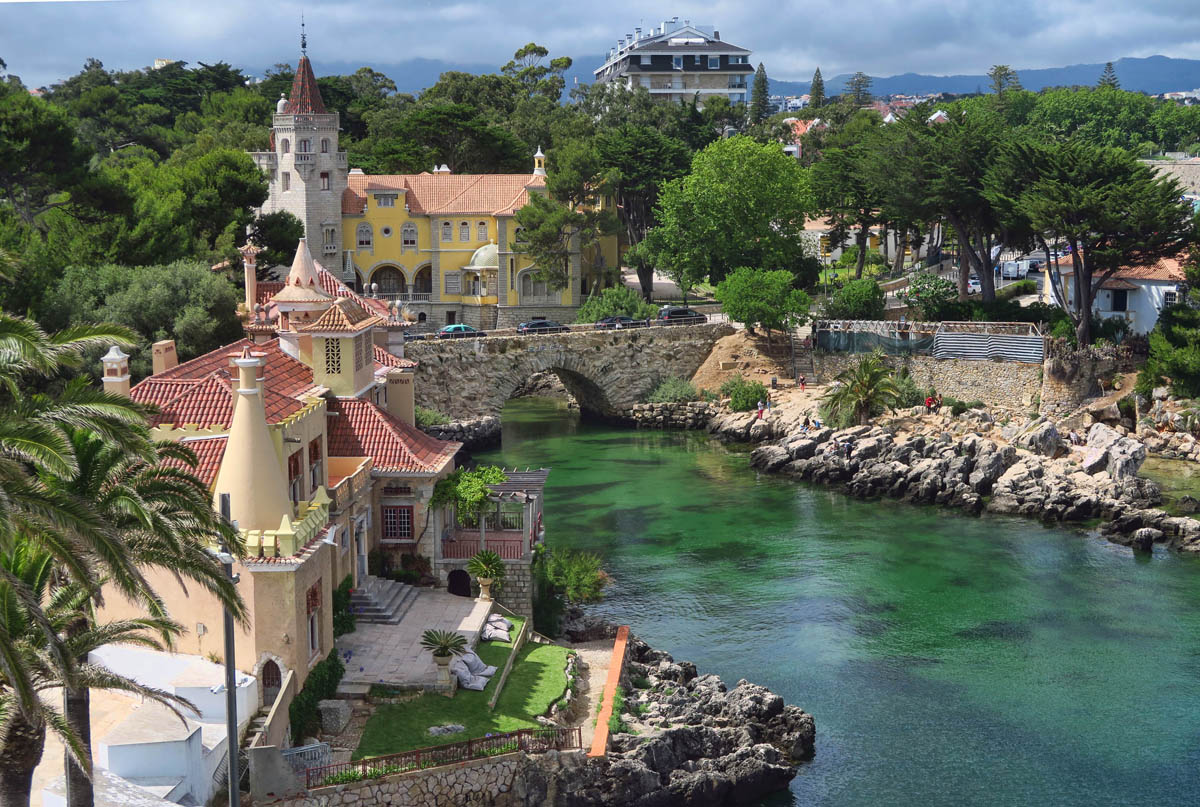 View from the opposite side of the lighthouse looking down over the summer mansions.

But the Santa Marta’s blue and white stripes make it look more like a toy as compared to the big daddy just 10 miles north along the wild and windswept coastline.  Standing at 540 ft over the Atlantic atop a rocky point promontory is Cabo da Roca, or Cape Roca. This lighthouse, along with the nearby stone monument with cross on top marks the westernmost point of the entire European continent. Although the present structure has been operating since 1842, its predecessor in the same spot began operating in 1772, making it the third oldest lighthouse along the Portuguese coast. The Cape is easily accessed by local bus leaving every half hour from downtown Cascais. 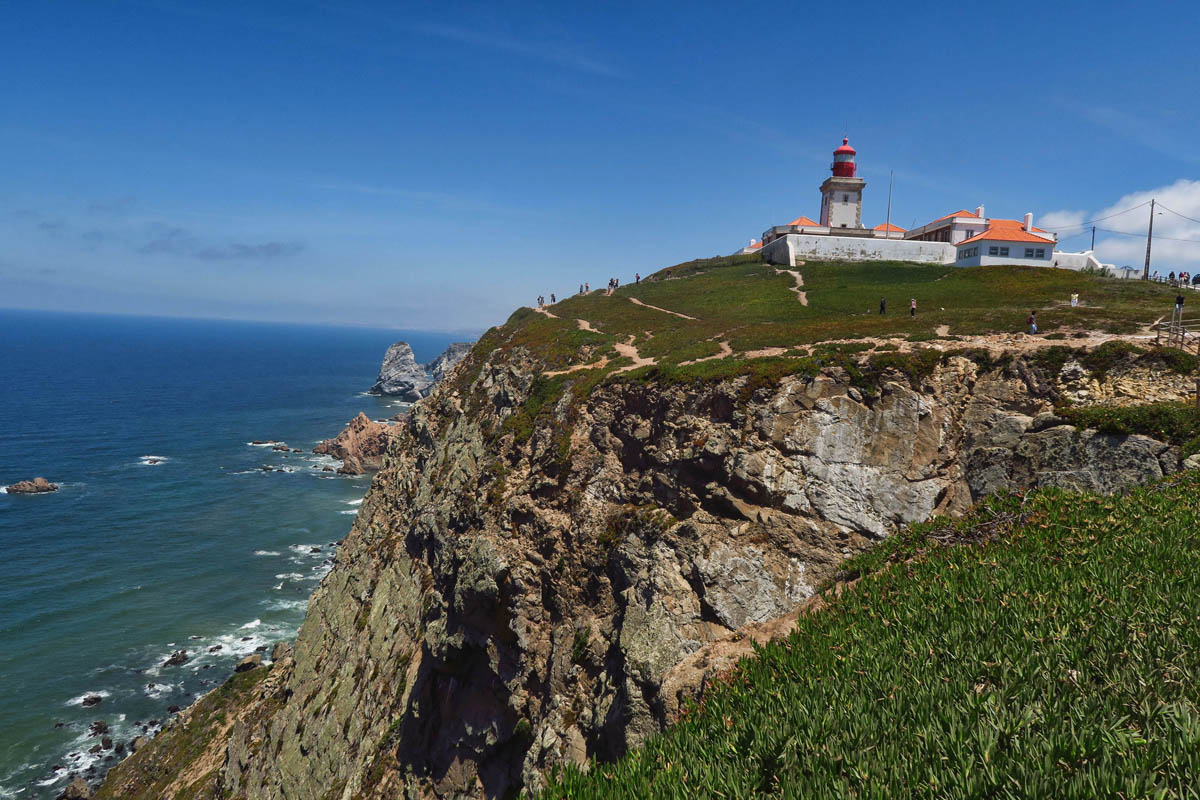 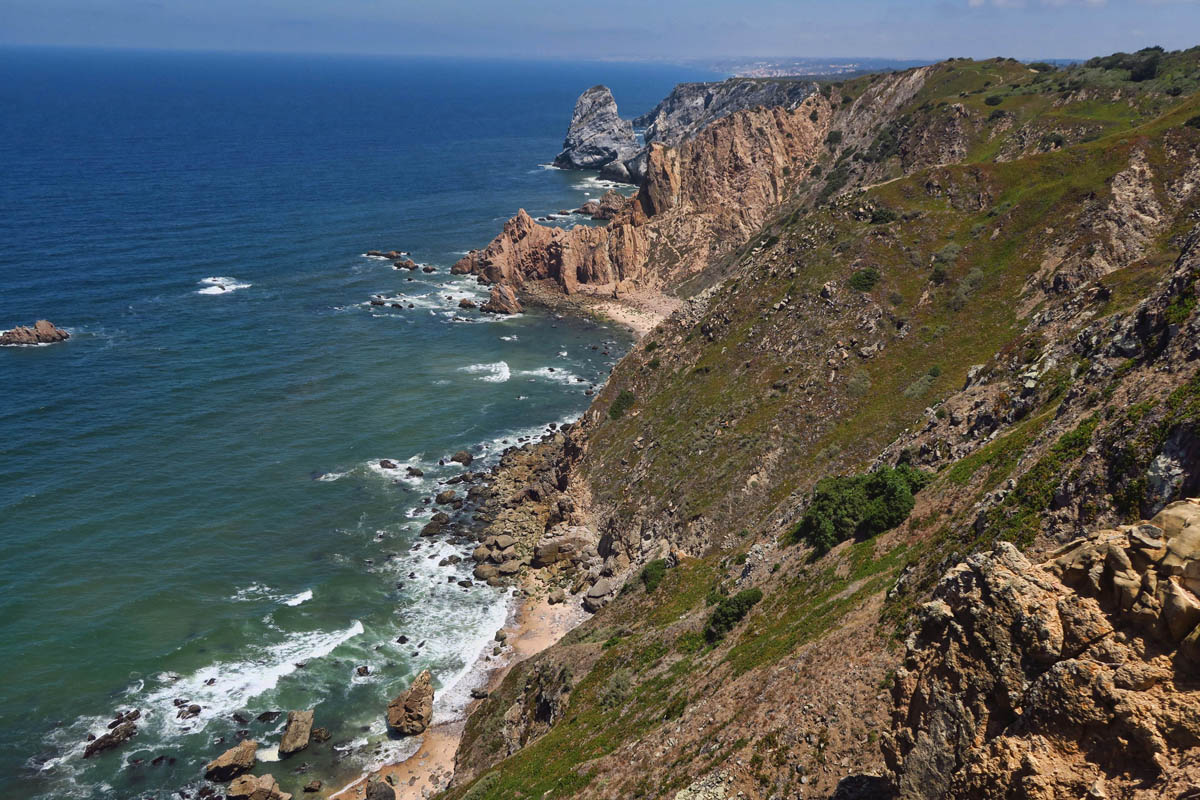 Such wild, windy, and rugged coastline! The wind was ripping along here, blowing not only ocean waves, but also sound waves causing a roar from the crashing surf. 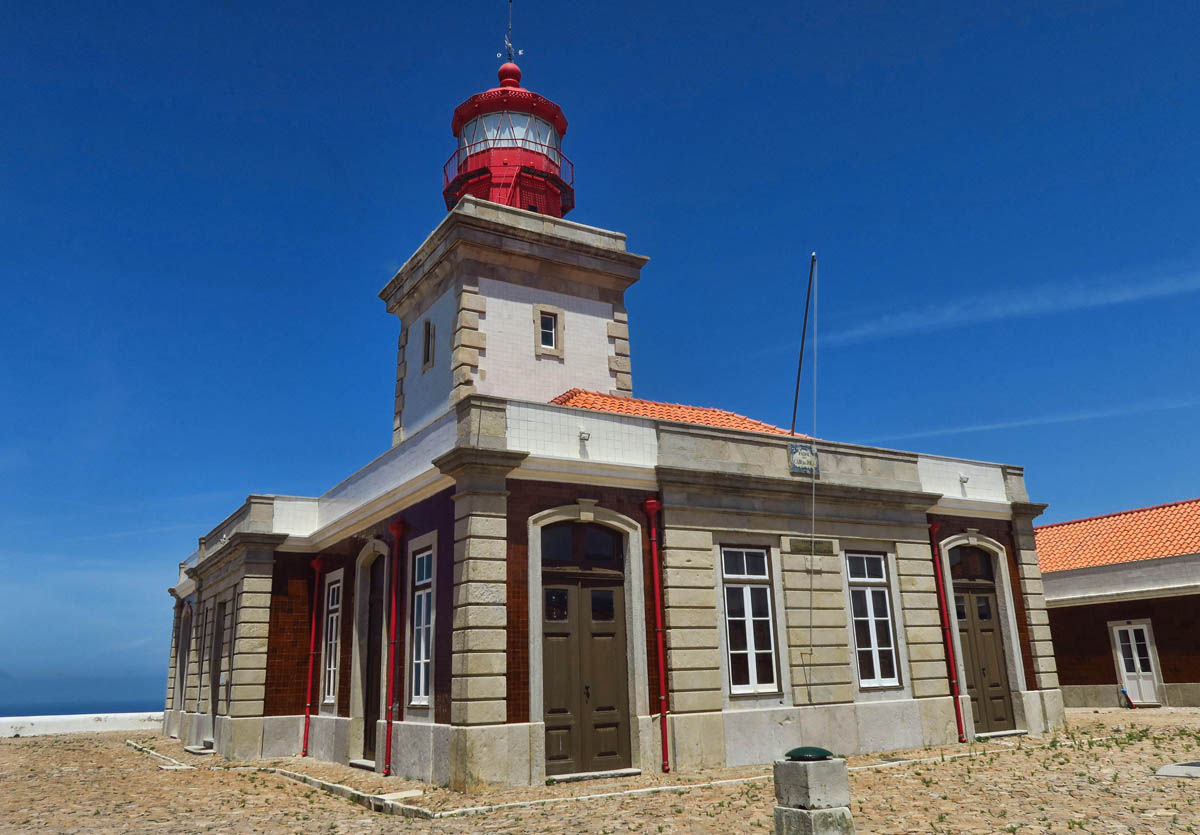 The Cabo do Roca lighthouse. Though this one looks pretty accessible, actually, I am taking the photo with my camera stuck through the iron gate. 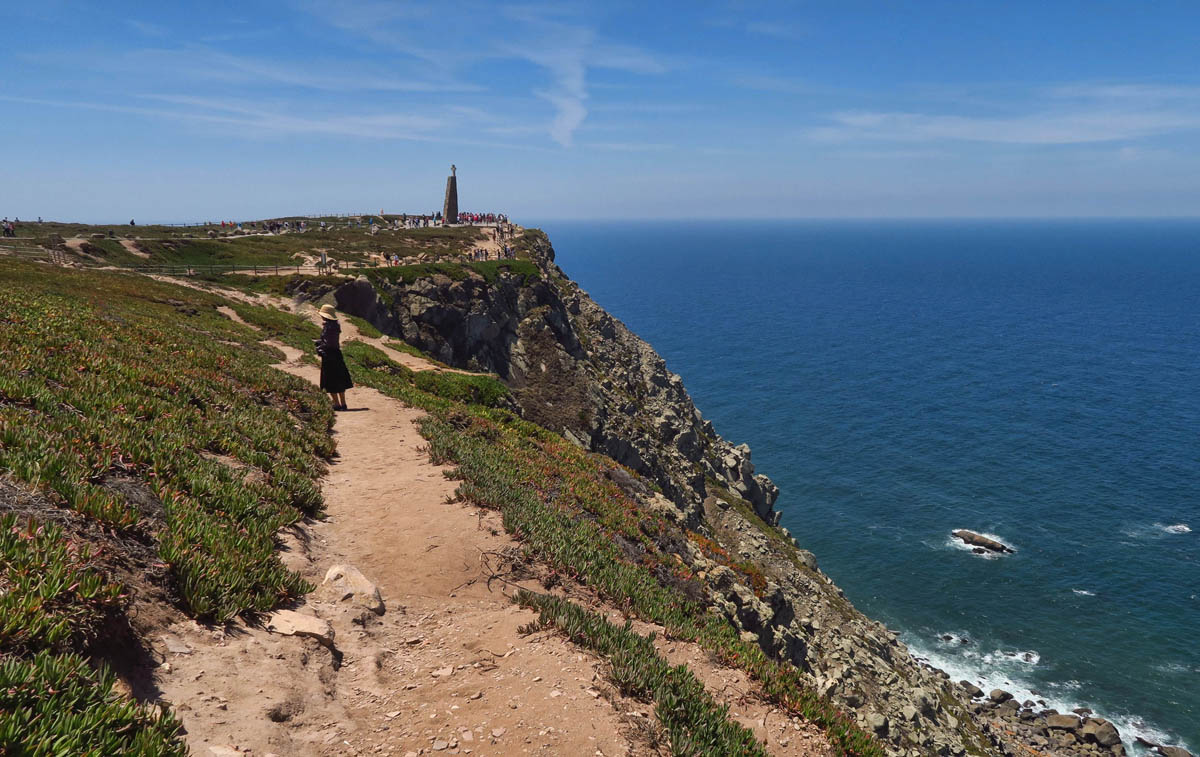 Path leading from the lighthouse to the monument. 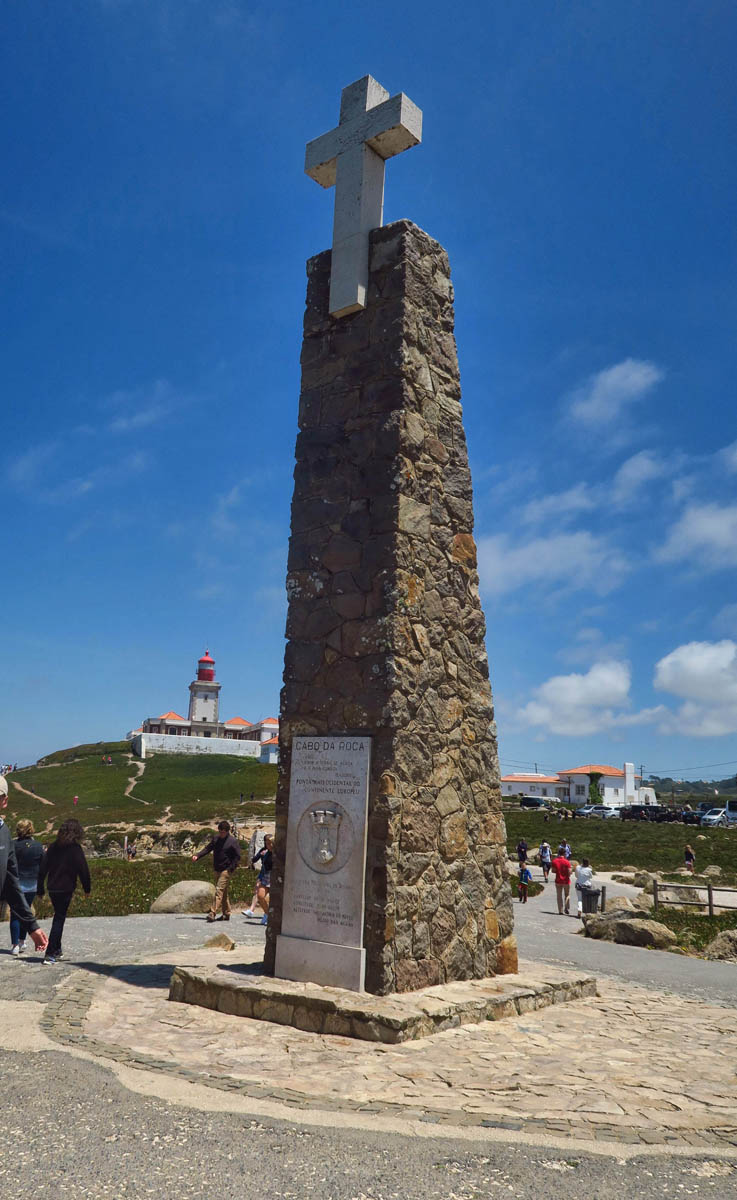 This stone monument marks “”Ponta Mais Ocidental do Continente Europeu,” or “the westernmost point of the European continent. 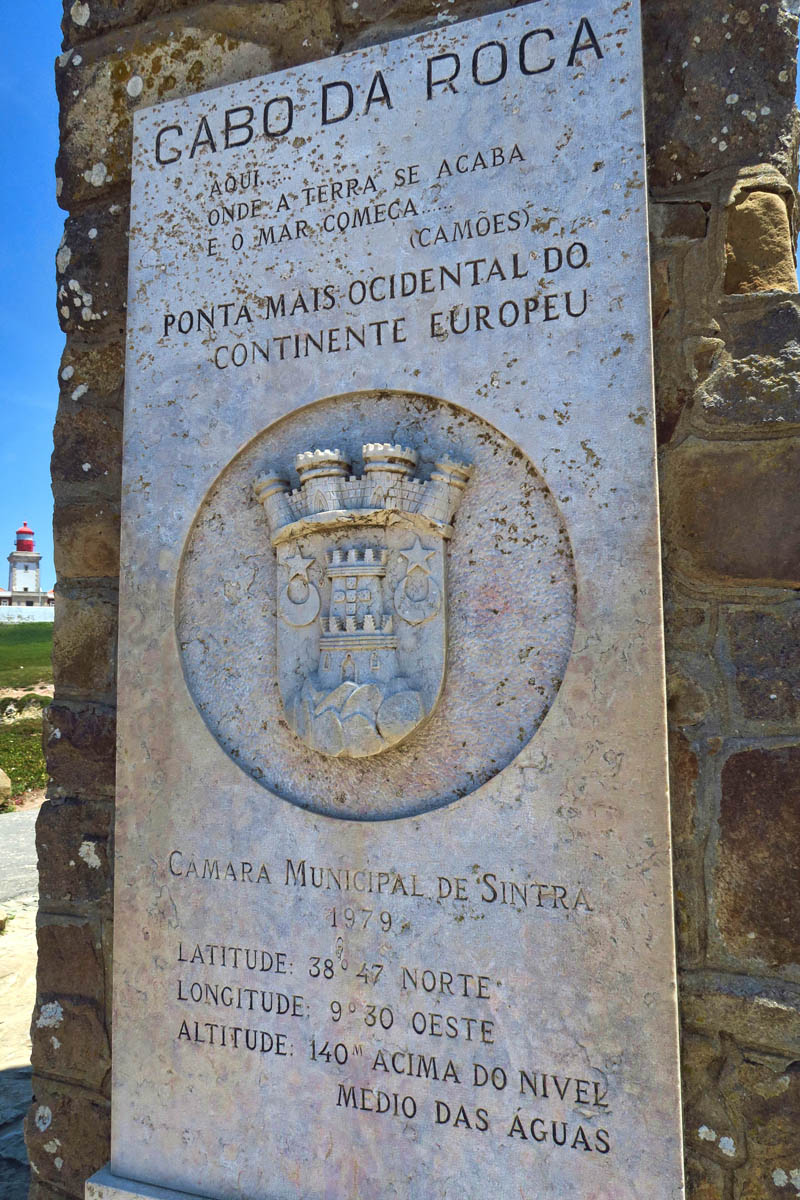 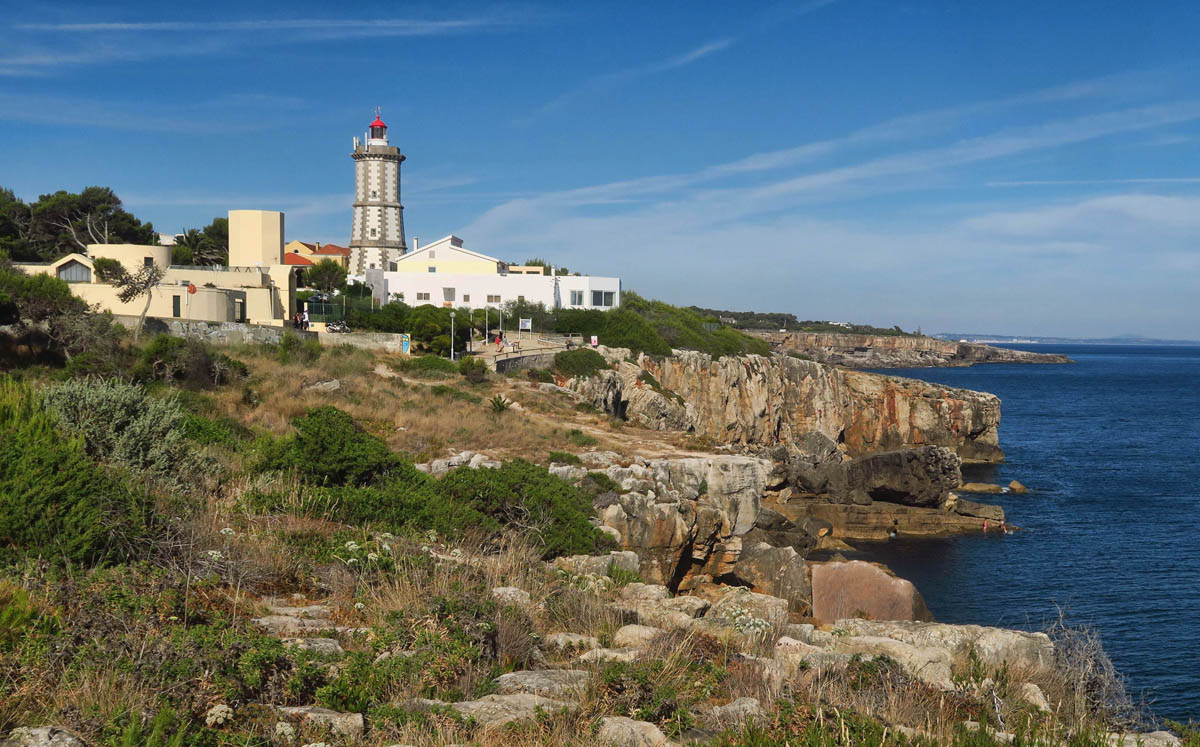 This is yet another one of Cascais’ other lighthouses, Farol de Nossa Senhora da Guia. This was as close as I could get, as it was surrounded by buildings with a tall fence obstructing the close-up view.

In the comment section of my last blog post, Terri asked about the cost of meals on my trip, so I think this is a good time to talk about what dining is like in Portugal.

Many guesthouses offer continental breakfast. For those that don’t, there are a plethora of pastry shops where one can get a coffee and a generous sized pastry for around €3-5.

Restaurants are consistent in keeping “siesta hours,” which means they open around noon for lunch, then everything closes up tight at 3:00pm, and doesn’t open again until 7:00pm. As one who prefers the “Early Bird Special” around 4 or 5:00pm, that makes it a bit challenging. Preferring to only eat twice a day, this mid-day gap has often times presented some challenges, as I will miss lunch while out touring, yet be too hungry to wait until 7:00pm for restaurants to open for dinner. That’s when I head to the deli found inside most larger grocery stores for a piece of roast chicken or sausage with some bread, cheese, and fruit for an inexpensive early evening meal.

When dining in Portuguese restaurants, one thing that is important to note is the “Cover.” These are small items placed on the table before ordering, and can range from the most simple basket of bread, usually with olives, to elaborate spreads and nibbles. Pay close attention to this! These are never free! Even though they are placed on your table as if they are compliments of the chef, there is an individual cost for everything served on the board, and it can add up in a hurry. If you don’t touch them, they will eventually be removed from your table without charge. Contrary to the charge for the “cover,” however is the small glass of port that is often served at the end of the meal, usually always complimentary.

The Portuguese typically take their main meal at lunchtime. You will find restaurants crowded with families, business people, and tourists alike ordering from the “menu do dia.” Costs for this meal of the day range between €8 -12, and typically include a set menu of soup or salad, main entrée, a small dessert, and some type of beverage. Just a hint, the further away from the “main drag” you get, the larger the portions and authenticity of these daily specials.

It’s typical to be served both rice and potatoes with one of the larger traditional meals. Often, potatoes come in the form of potato chips or fries. While serving potato chips with a meal seems associated with a much more casual meal in the US, they are often served as the accompaniment in the finer dining establishments of Portugal.

Finally, on those evenings when I was able to hold out until 7:00pm, I always ate “tapas,” or the Portuguese version, “petiscos,” which are small plates of a singular food items such as grilled meats, roast vegetables, or even what we would consider appetizers like sliders and sandwich bites. These typically range in price from €3-8 each, depending on how fancy. I found two petiscos were just about right for dinner. My favorite place to eat petiscos or tapas was what I have referred to as “chalk board restaurants,” where the items change daily, therefore the temporary menu is written on a chalk board either posted or passed around by the waiter.

While reasonable by major US city standards, some of the menu items might seem a bit pricey to eat on a daily basis. However, this was always offset by the affordable cost of beer and wines sold by the glass, for which I never paid more than €3. 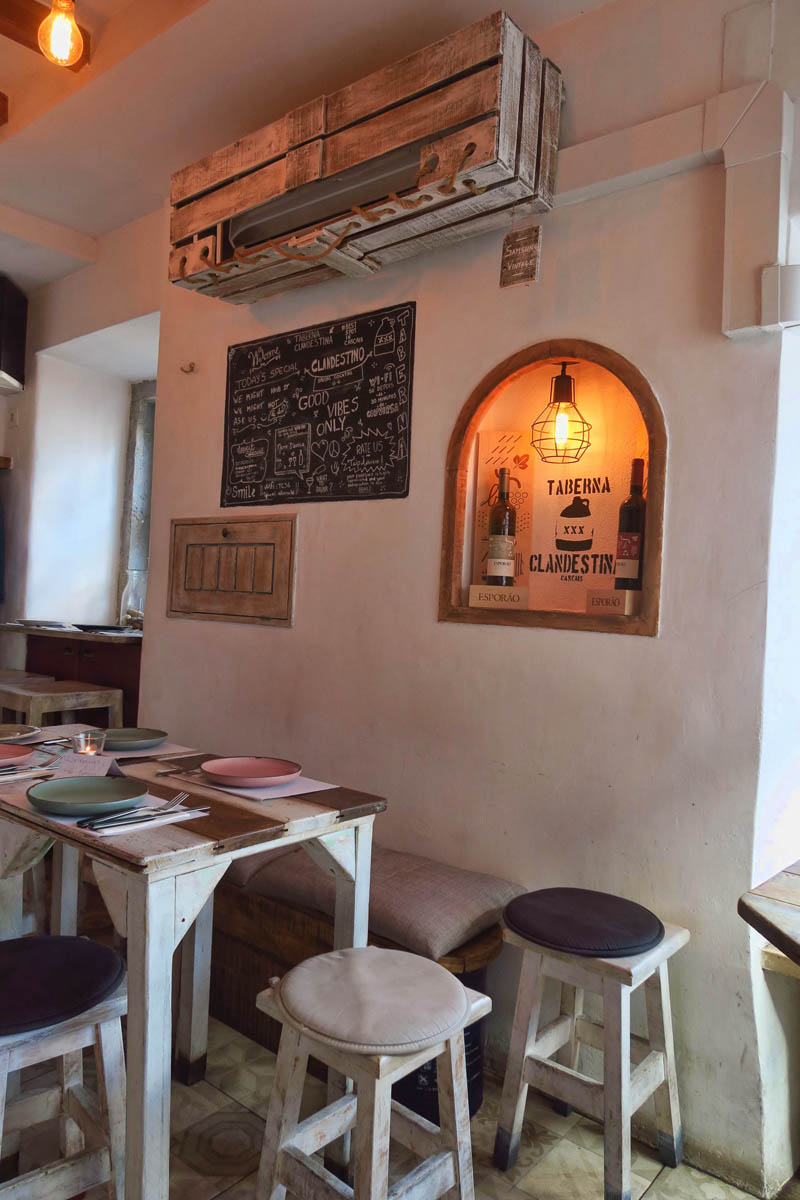 One of the best “chalkboard restaurants” I visited, Taberna Clandestina. 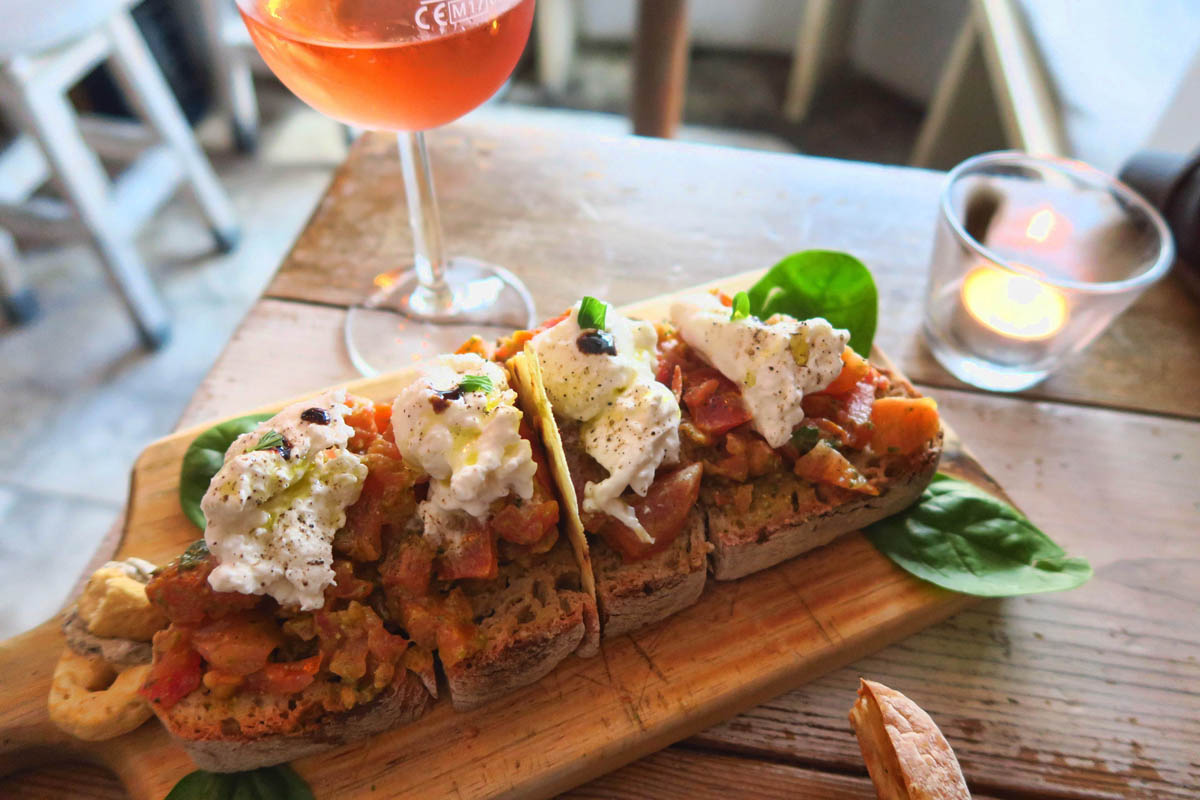 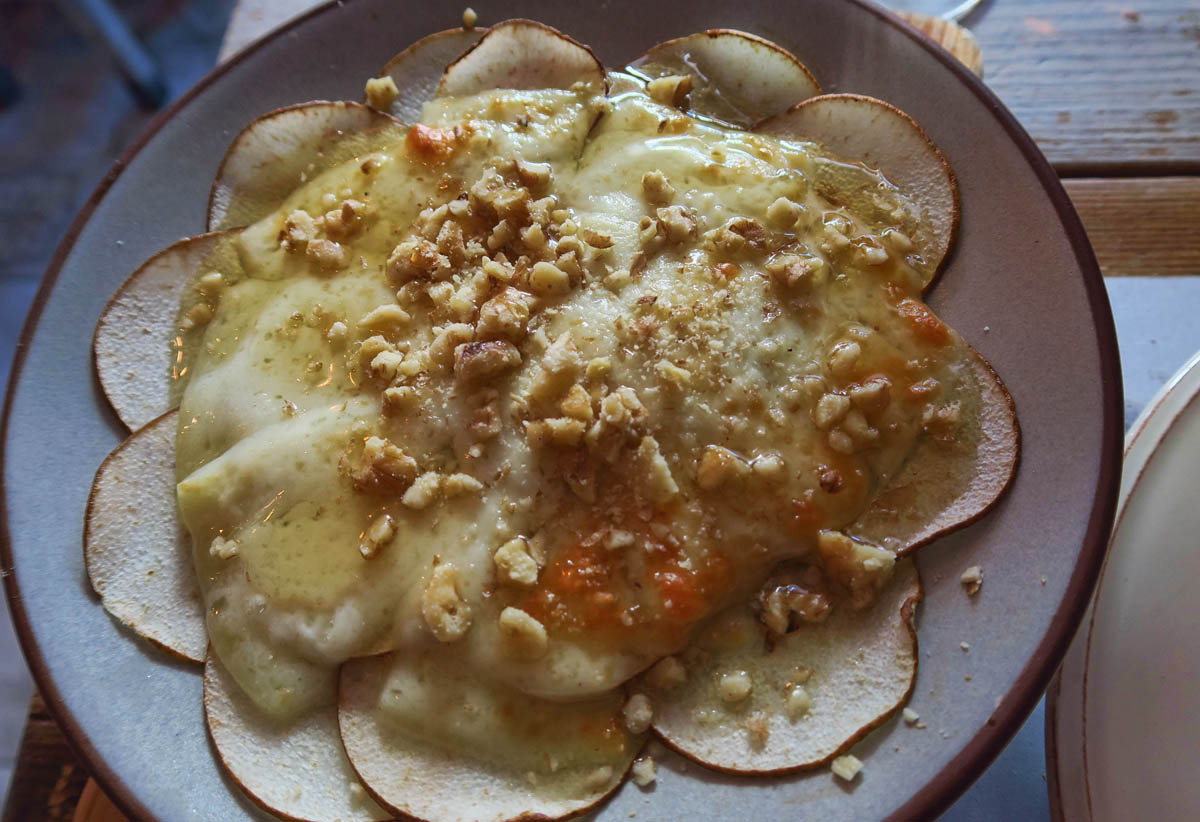 With that said, I did find Cascais to be the most expensive Portuguese city I had visited thus far, which prompted me to do the “Walk of Shame” to McDonalds, (my guilty pleasure, as I shamelessly admit, I actually enjoy a visit to McDonalds on rare occasion!)  But I am here to explore Portugal, not US fast food. And even though glossy tourist brochures advertise 16 beaches, biking trails, golf resorts, and “something for everyone,” for me, Cascais is a bit too touristy. For these reasons, Cascais is the only place where I opt to cut my visit shorter than originally planned. After two warm sunny days, three beautiful lighthouses, a couple of expensive meals and one Big Mac, I am ready to leave it behind and move on. 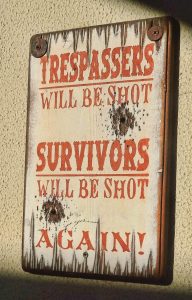 There is quite a large expat community in Cascais. This signage is contrary to my experience here in Portugal, so aside from the obvious clue from language on the sign, I can’t help but wonder what “nationality” lives here!