As I mentioned in my previous post, Feeling the Danakil Depression, there were other factors toward my feeling a bit depressed than just the Depression. National Geographic had a reason for calling it “The cruelest place on Earth.” Not only is the Danakil infamous for its inhospitable climate and riotous multi-colored, toxic fume-spewing geysers and sulfur pools. The phantasmagorical formations are a recent attraction, believed to be created only as recently as 1926 when inorganic iron from red hot magma emerged up through the standing salt pans, ten times more salty than the sea. But the region has been producing much greater value than beautiful tourist sites for centuries. Outside the “adventure tours” realm, the Danakil is best known for its salt, at one time so valuable it was called “White Gold.”

Over the centuries, the Danakil Depression has been flooded by the Red Sea on more than one occasion, each time leaving behind layers of crusted saline in the salt plains up to 2,600 ft thick in places.

For over 2,000 years, this salt has been mined by hand by the Afar people, loaded on camel-back, and driven for up to seven days to the nearest “caravan town” for trade or sale. The salt blocks, called “amoles” were used as currency for trade for goods and services. Today’s market brings 4 Birr (about 12 cents) per slab. By the time the caravan reaches the nearby town of Berhale, the slab value has increased ten-fold. 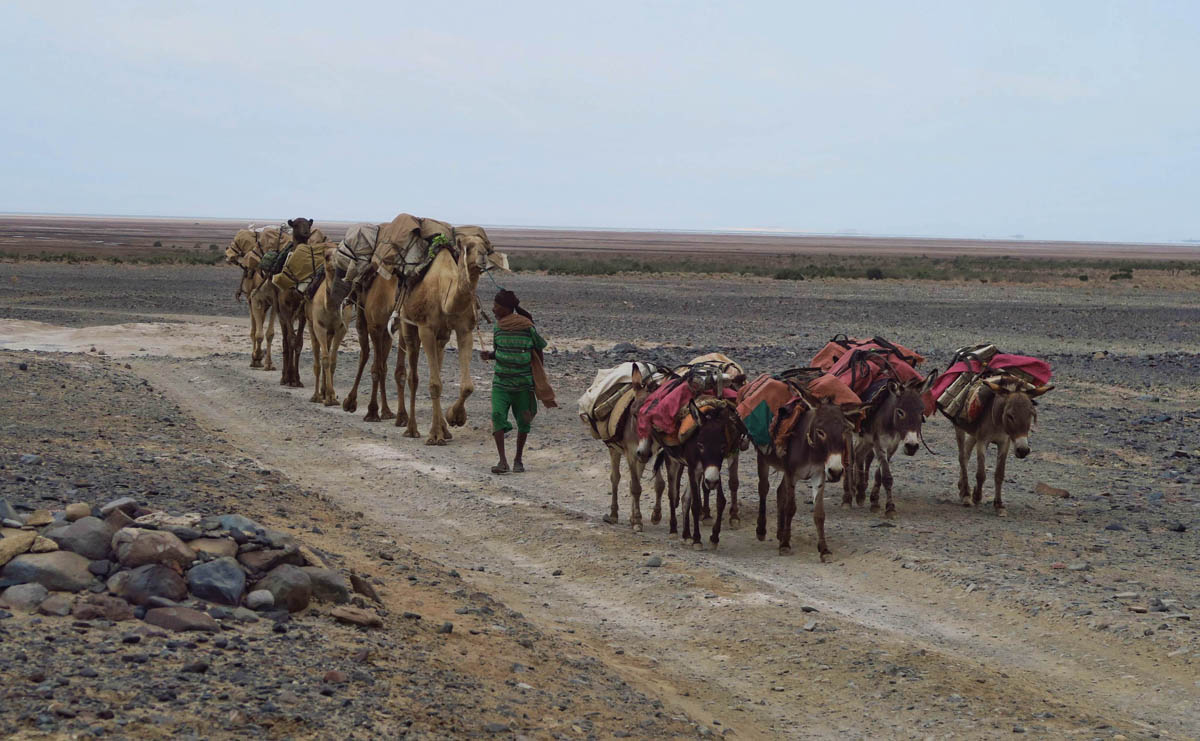 Coming into the Danakil, we encounter our first camel caravan. 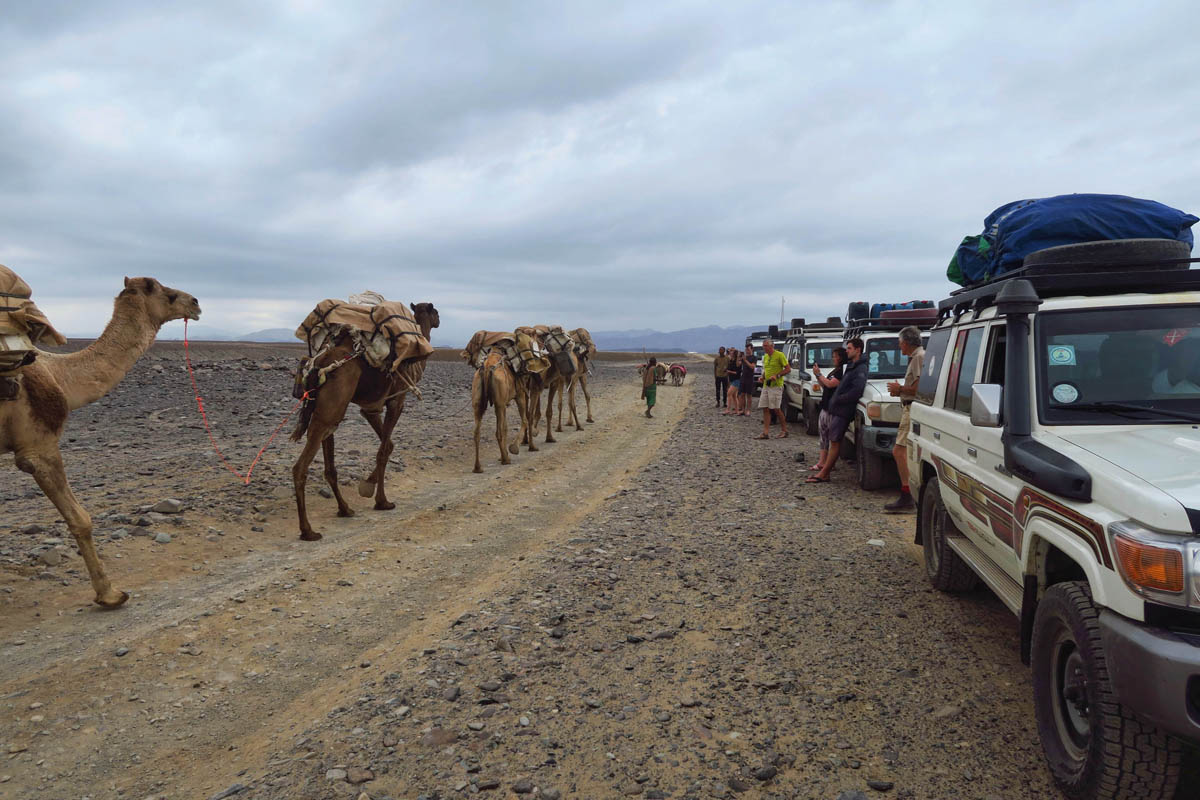 Each one of the camels is carrying about 30 slabs of salt, which weigh about 4 to 5 kgs, or 10 lbs each. 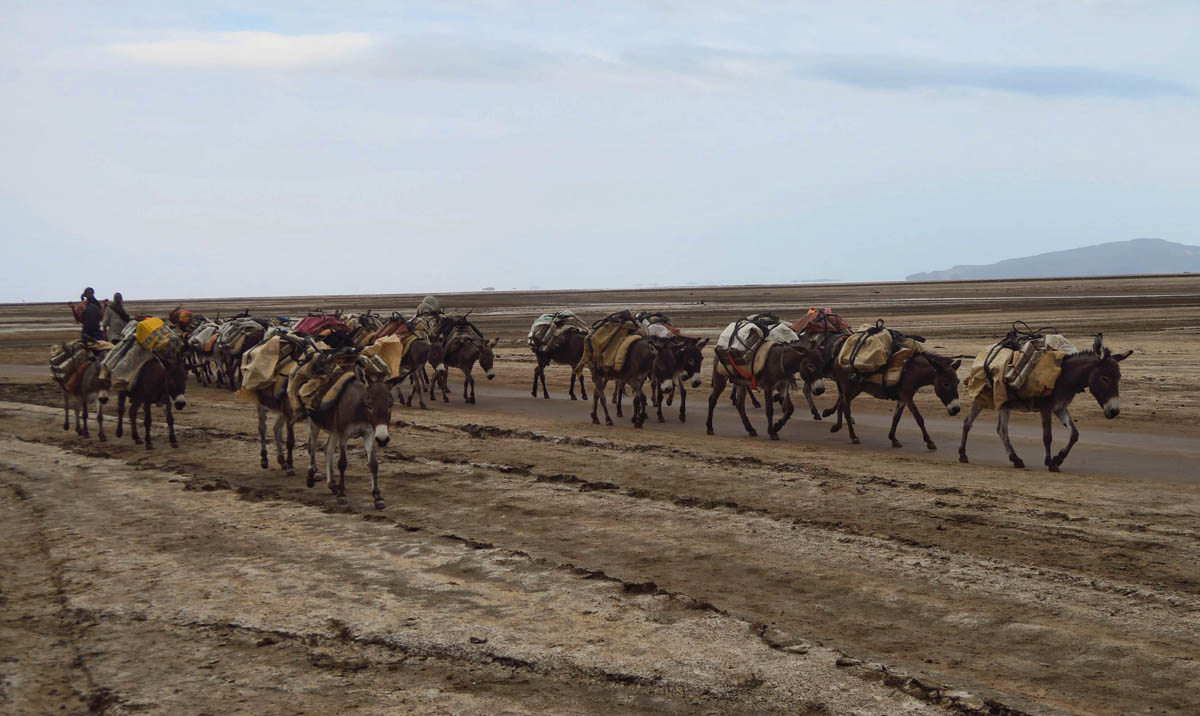 They will be traveling for two days to reach Berhale, the town where we just stopped for lunch. 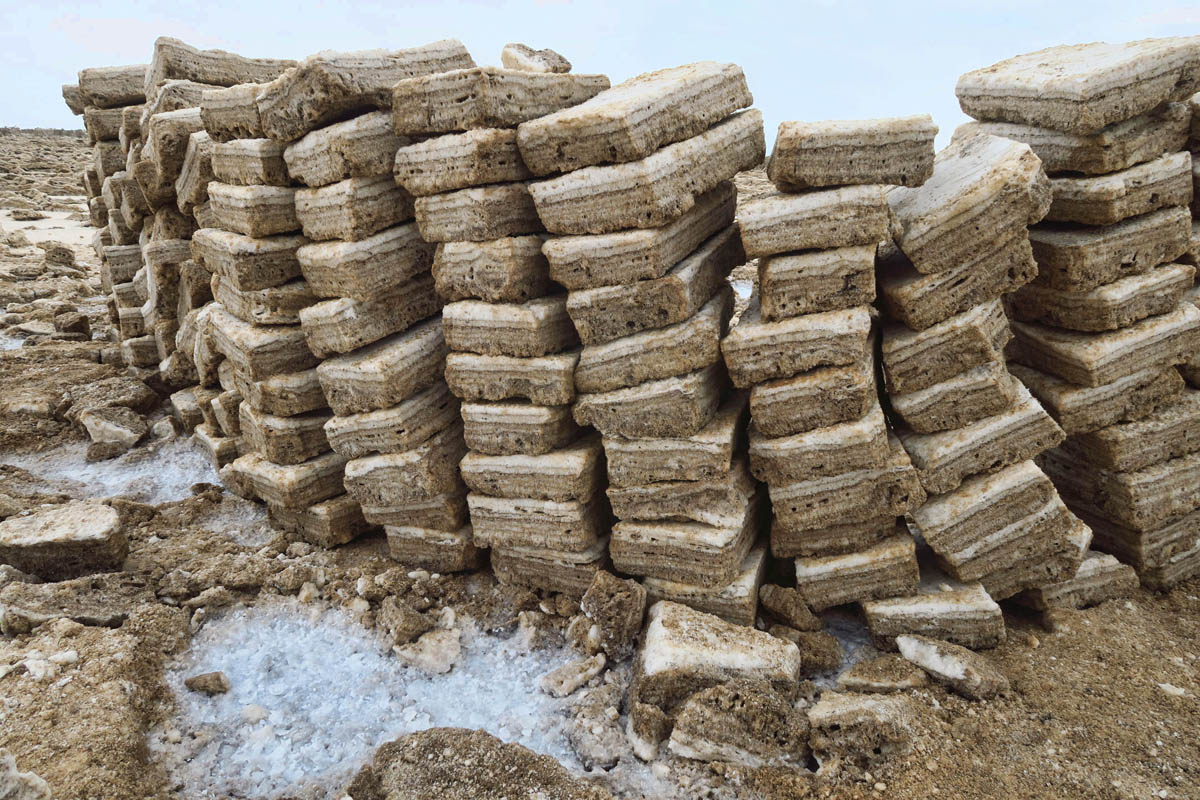 It amazes me how uniform the slabs all are considering they are cut by hand.

There’s a new paved road under construction that will cut the travel time from the current four-day trek by camel down to four hours. But the Afar people are not happy about this, as they see it as a threat to their ancient trade that has been handed down for centuries. They fear the mechanized extraction techniques will take away their livelihood as well as their traditions. The foreign-owned mines could put them out of work in an area where there is no other work to be had. And the ulterior motive of mining other minerals in addition to salt could also impact tourism, as the Dallol area holds the largest deposit of potash in the world. 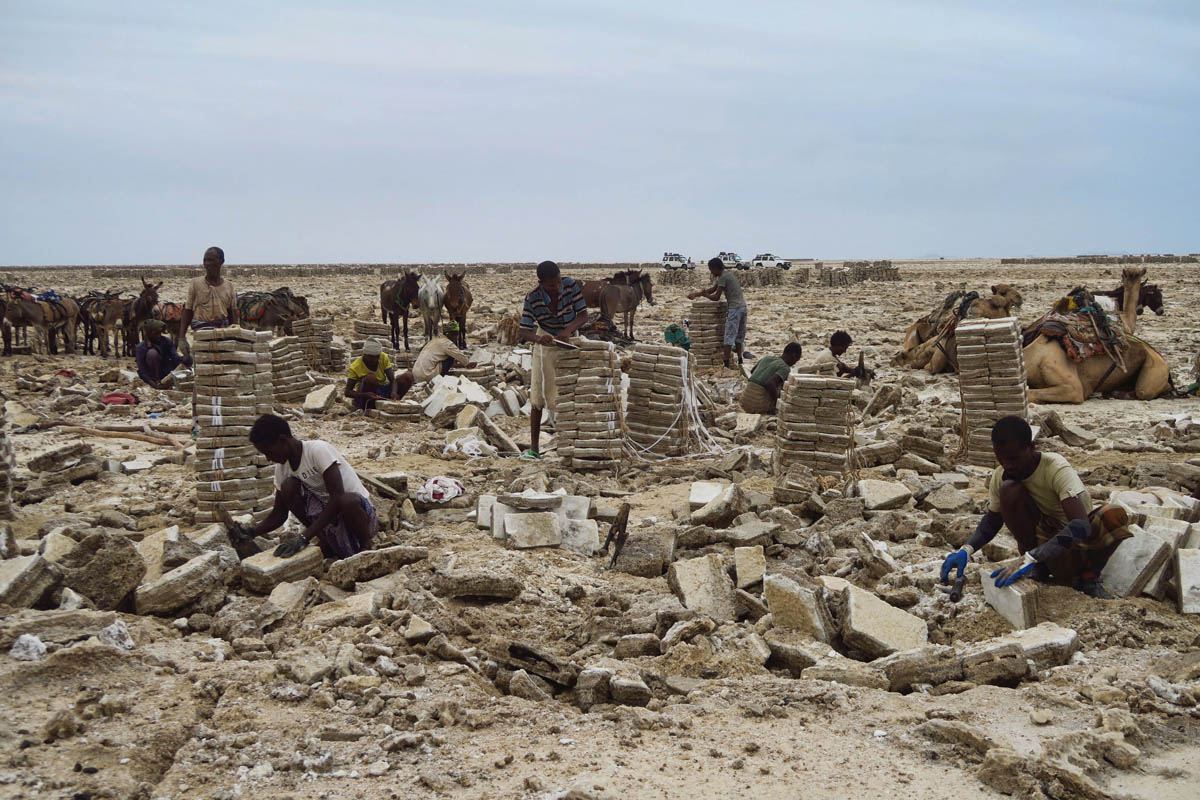 While we pass many stacks waiting for transport, we would not encounter miners until we were on our way out. I am grateful for our visit to learn more. 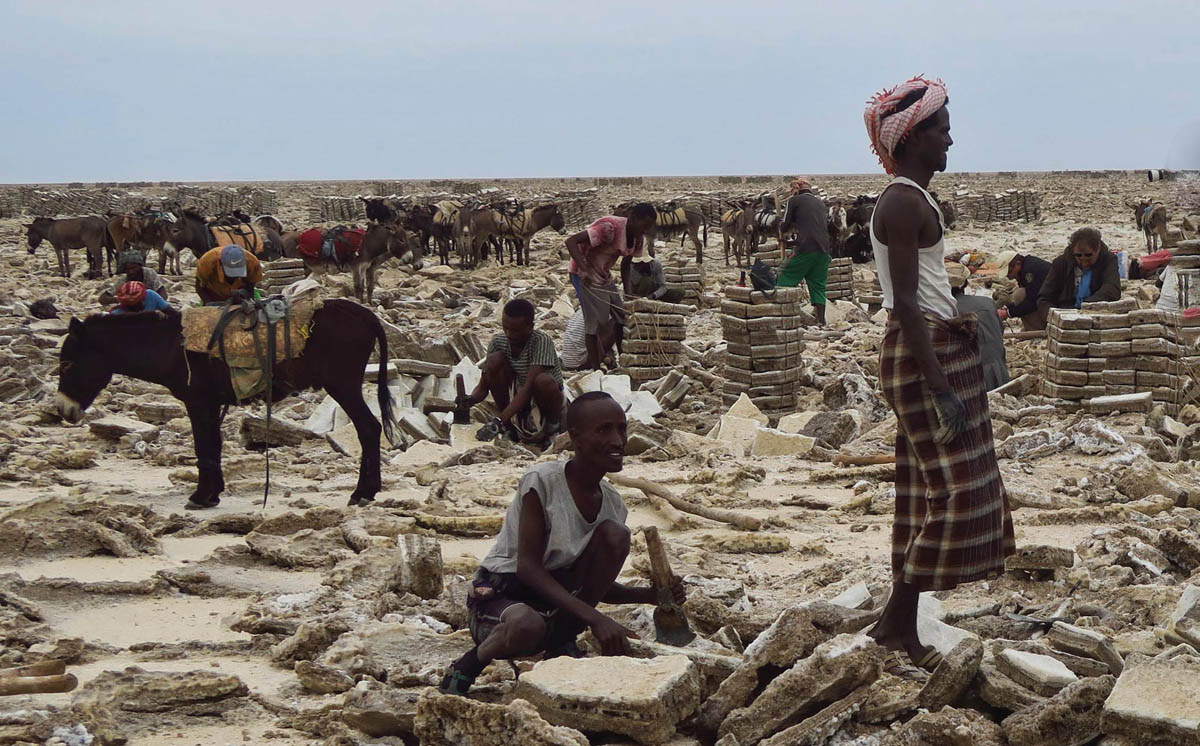 These photos all appear to be black and white. No real color to be seen here. 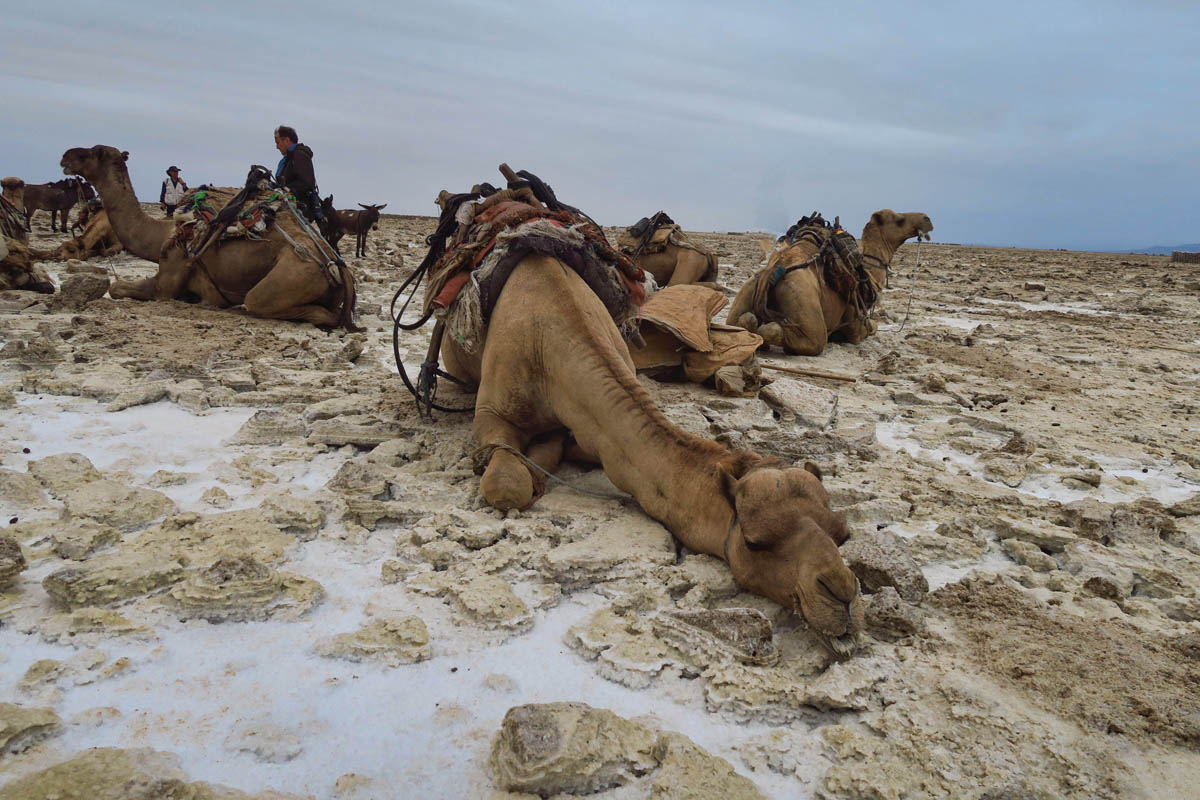 Rest up, dear camel, while you can. 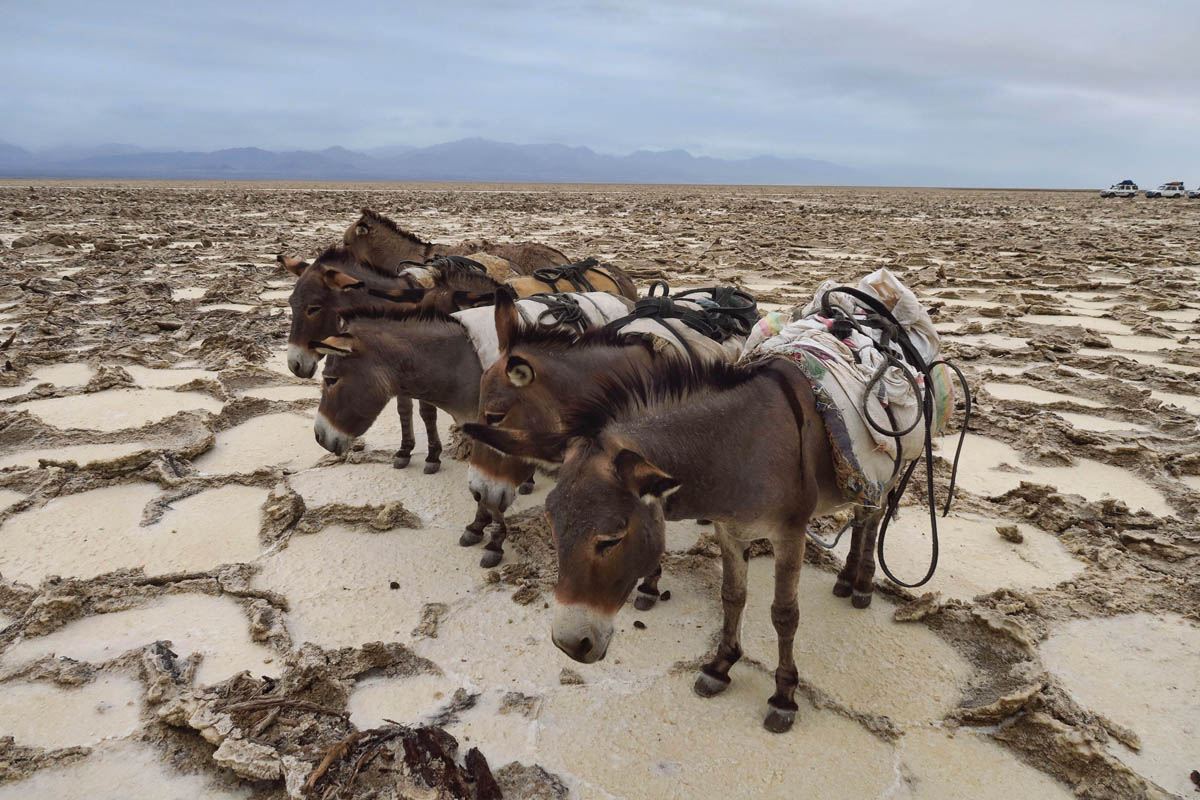 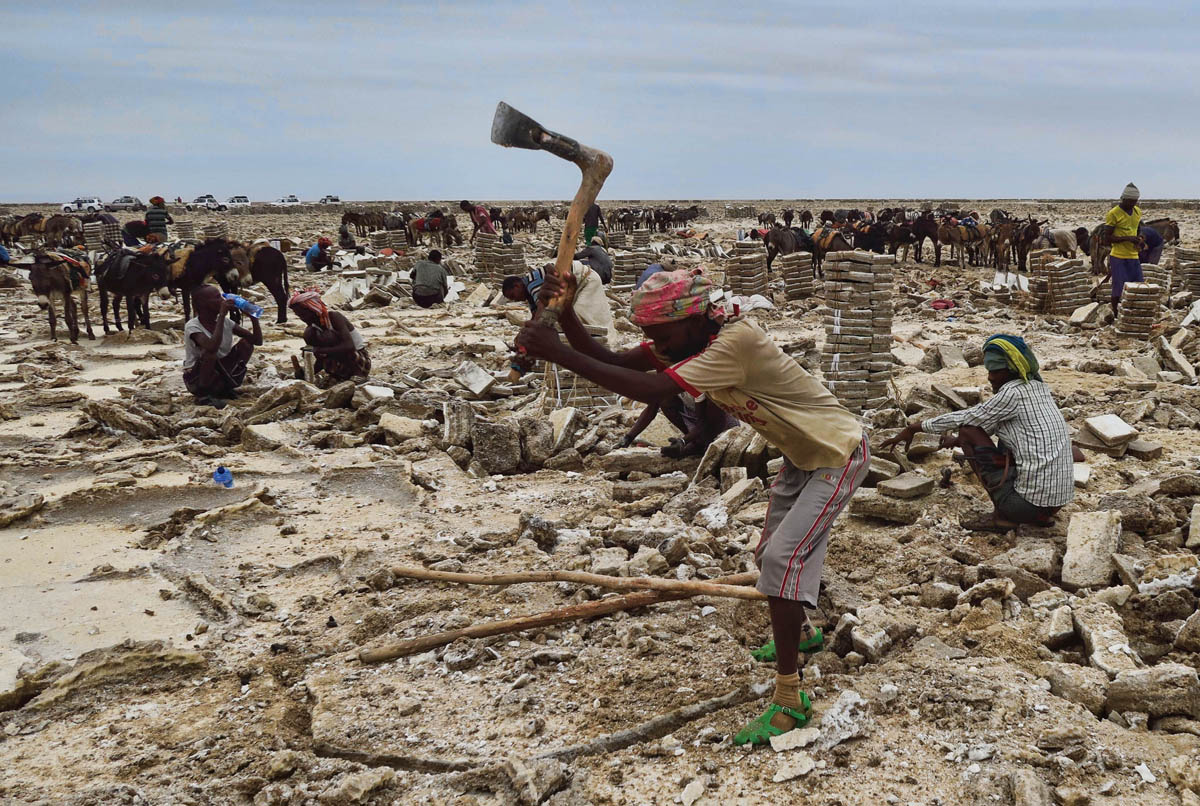 The entire ground reverberates with a “thud” when this axe hits the salt. 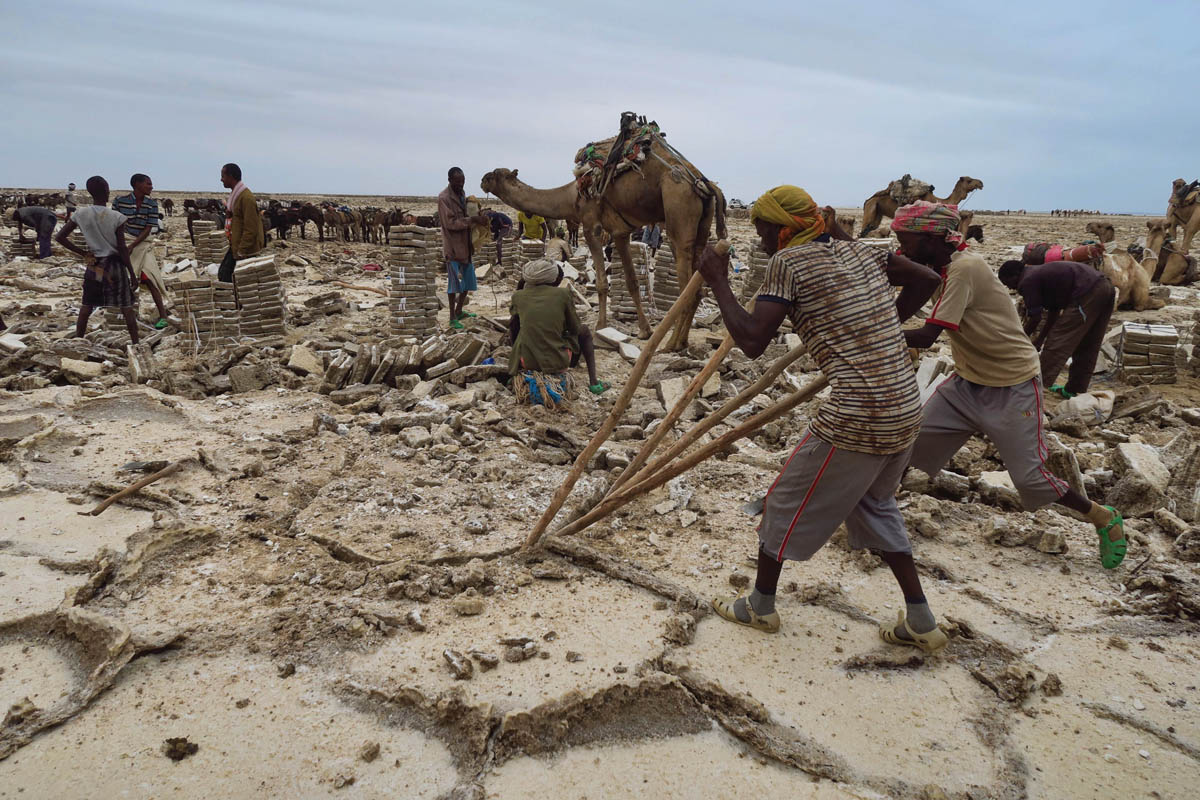 Once the larger outline has been cut, the slabs are raised by leveraging long wooden poles.

“Salt mines” in the Danakil are defined as wherever the miners happen to be working. We are told at the beginning of our tour that we will be able to visit a mine only if we encounter one along the road on our way out. We are in luck, as a group is mining just a few yards off the road on the way back to Berhale.

We are told that we need to come bearing “gifts,” the most prized possession being a bottle of water, so each one of our vehicles has been loaded with bottles to spare. I happen to be one of the first to make my way across the crusty salt layer to where the miners are hard at work. I am not there thirty seconds before the big axe-bearer lowers his axe, walks over to me, grunts and points at the bottle I am cradling like a baby in my arms. I toss over the bottle before he can even finish his ask, feeling like I am feeding a leg of lamb to a hungry lion.

The Afar people have a reputation of being as hostile as their environment in years past, known to lob off the testicles of male intruders. Though we are told that they are no longer a hostile tribe, and in fact welcome visitors to watch them work, I feel uneasy among them. They just look angry. Who wouldn’t be angry working in these conditions of constant contact with the abrasive salt, jarring physicality with rudimentary tools, no protection from the blistering sun or relentless wind in 95 degree heat for eight hours, all for the price of bottle of Whole Foods Himalayan Pink Salt? It’s one of those defining moments I hope I remember next time I am standing on the condiment aisle of the gourmet market, looking at the shelf of kosher salt, coarse salt, finishing salt, flake salt, smoked salt, flavored salt, Fleur de Sel, etc. etc. I hope I don’t forget about the Afar people who spent all day hacking away at 150 slabs of salt to earn what one of these jars of “gourmet salt” costs. 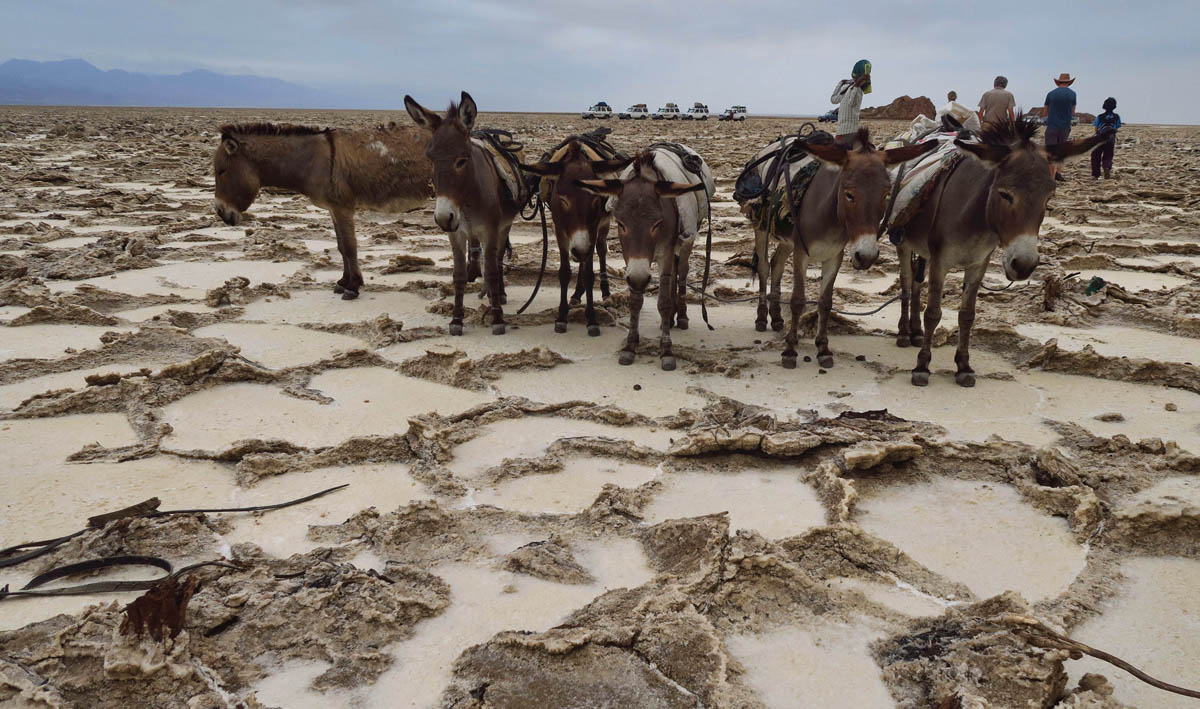 I liked this photo of the donkeys juxtapositioned in front of the “modern day donkeys,” our 4x4s. 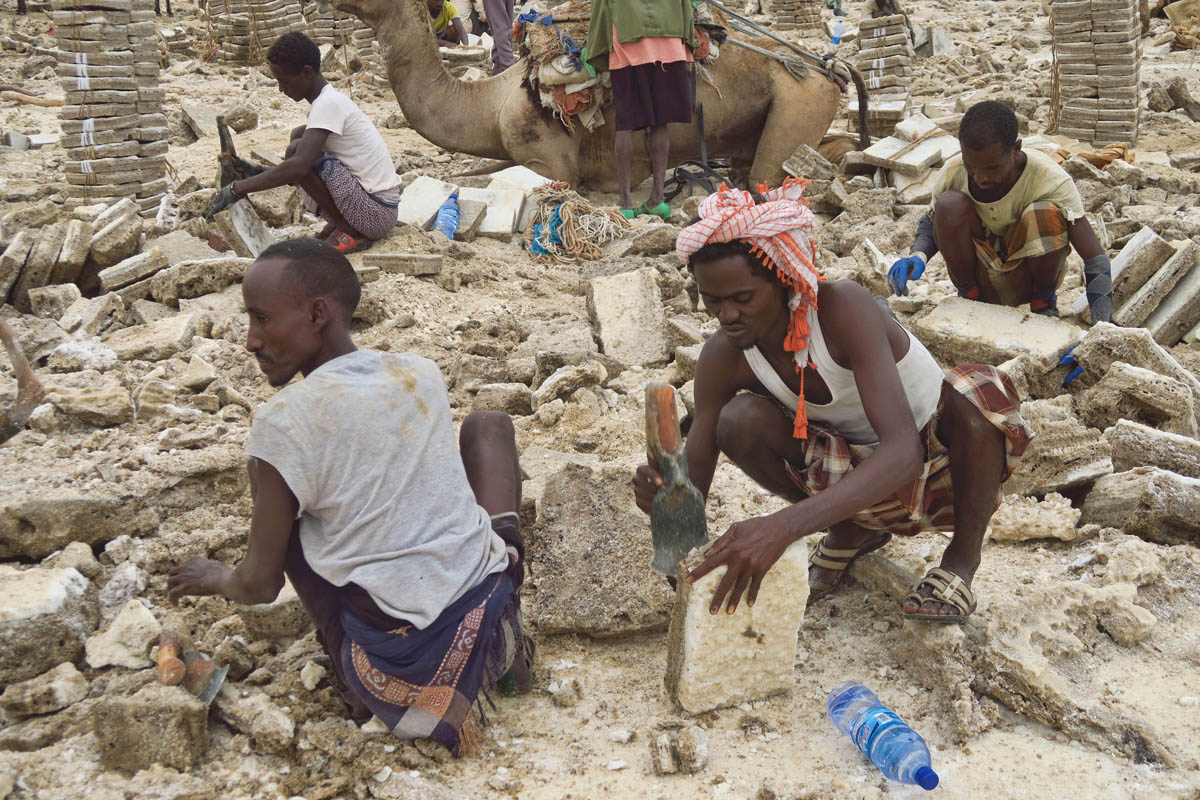 Each worker has a role. Some cut from the ground, while others plane the slabs down into precise rectangular blocks. 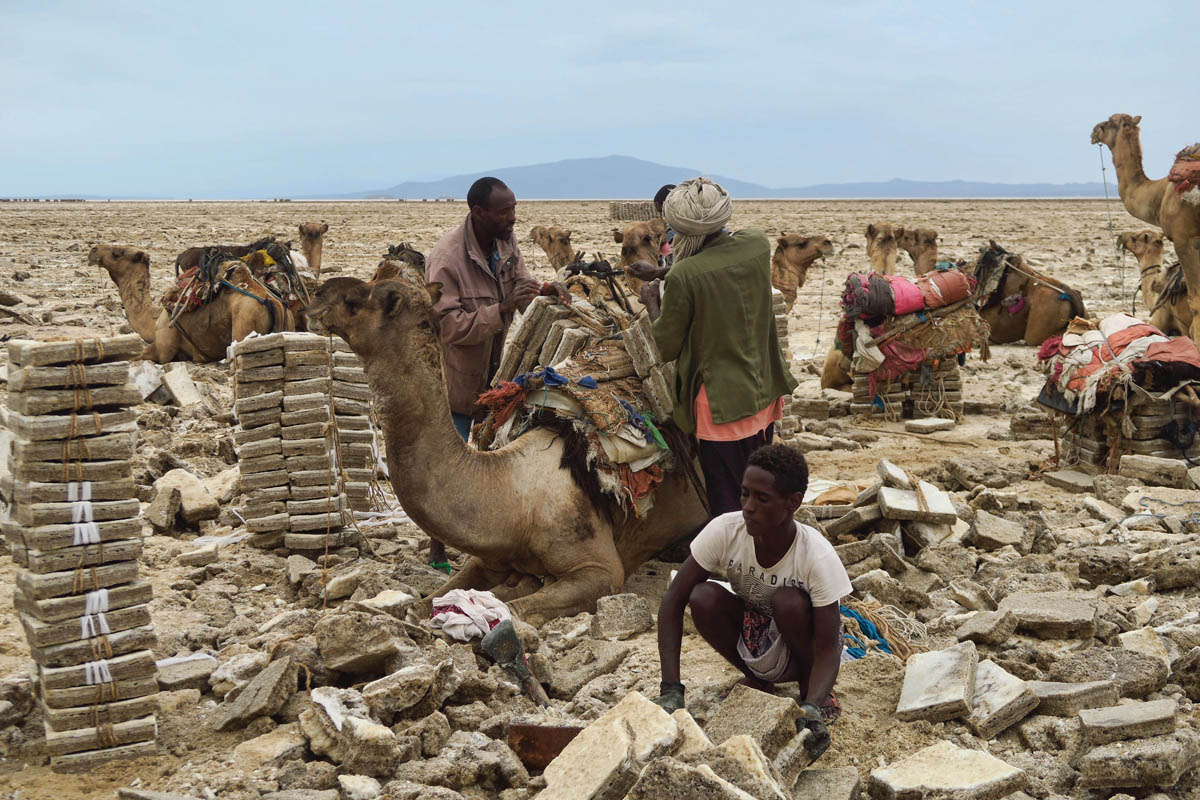 Once they have been planed on all six sides, the blocks are loaded onto the camels. 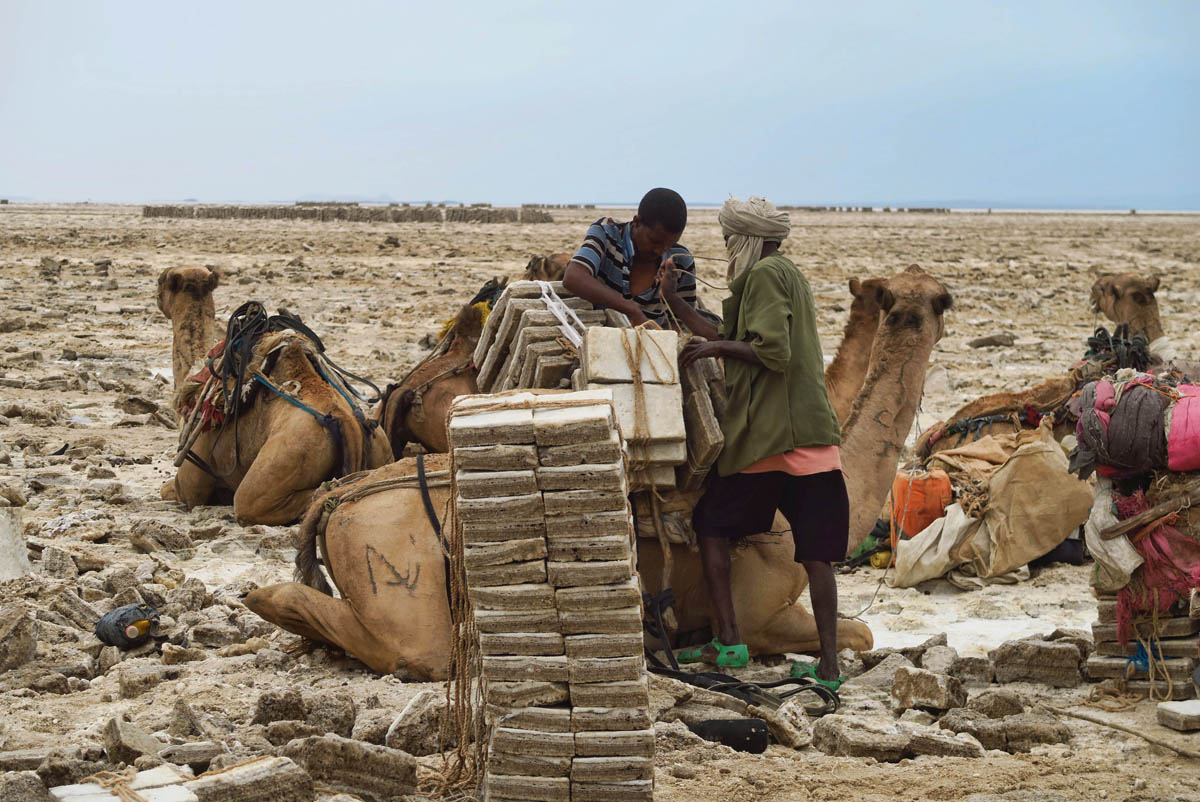 The salt miners don’t actually own the camels. Those are owned by wealthier camel herders. 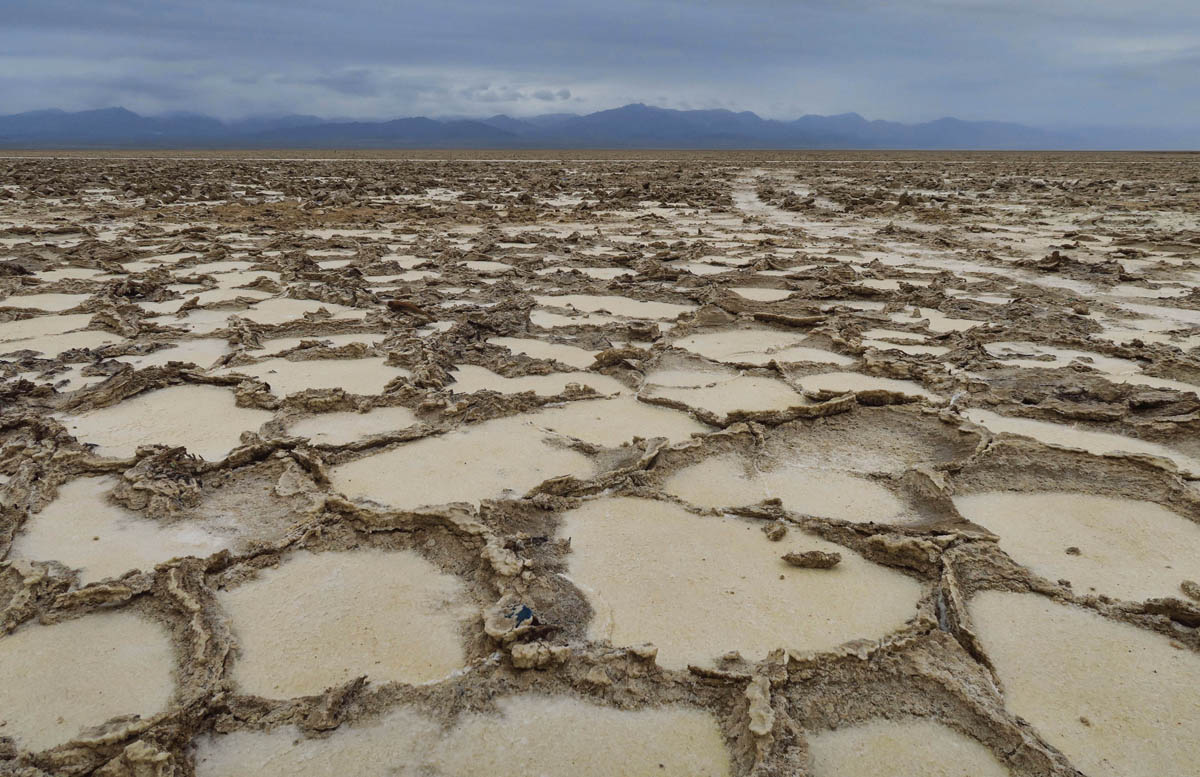 It will be a two day journey back to Berhale. Seven days if they go all the way to Mekele.

Traveling from our night camp to the different attractions such as Dallol, Lake Asale, and the salt hot springs meant traveling back and forth along the same road getting to and from the locations. The first time we drove along the road, I noticed a lone camel sitting beside the road. He was tied to a pole. I wondered why he had been isolated from the other camels, and why he wasn’t working in the caravan. The second time we passed, the camel was still there, looking rested in his seated position, and though still tied up, he looked content. The third time, I had memorized where the camel was along the roadside, and looked forward to seeing him as we passed by. The fourth time on our way out of the Danakil, I knew the location for the camel was coming up, so I began to watch for him outside the window. As we approached the location, I noticed there were two men standing where the camel used to be tied up, but I couldn’t see the camel. The two men were hacking at the ground. The ground was blood-stained red, with large chunks of raw meat lying about. My camel friend was no more, an image that would haunt me for days. Welcome to “The cruelest place on Earth.” 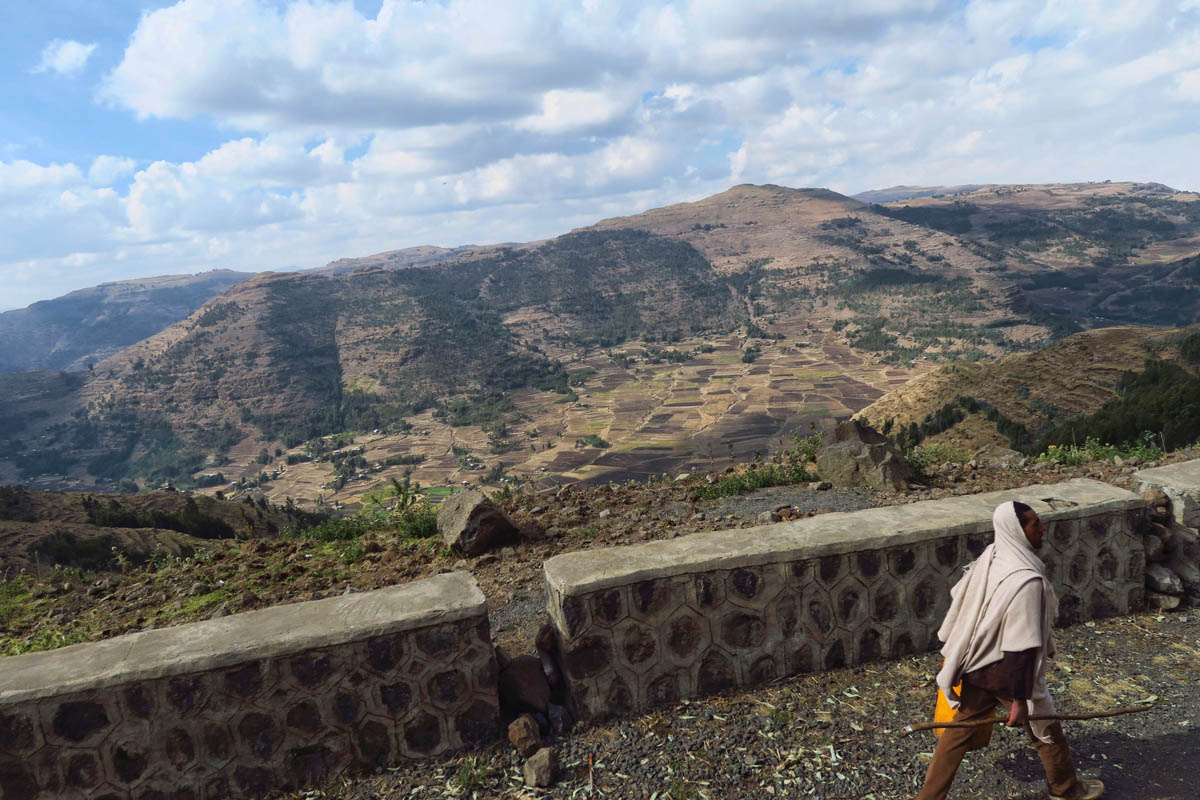 Climbing up out of the Danakil Depression… 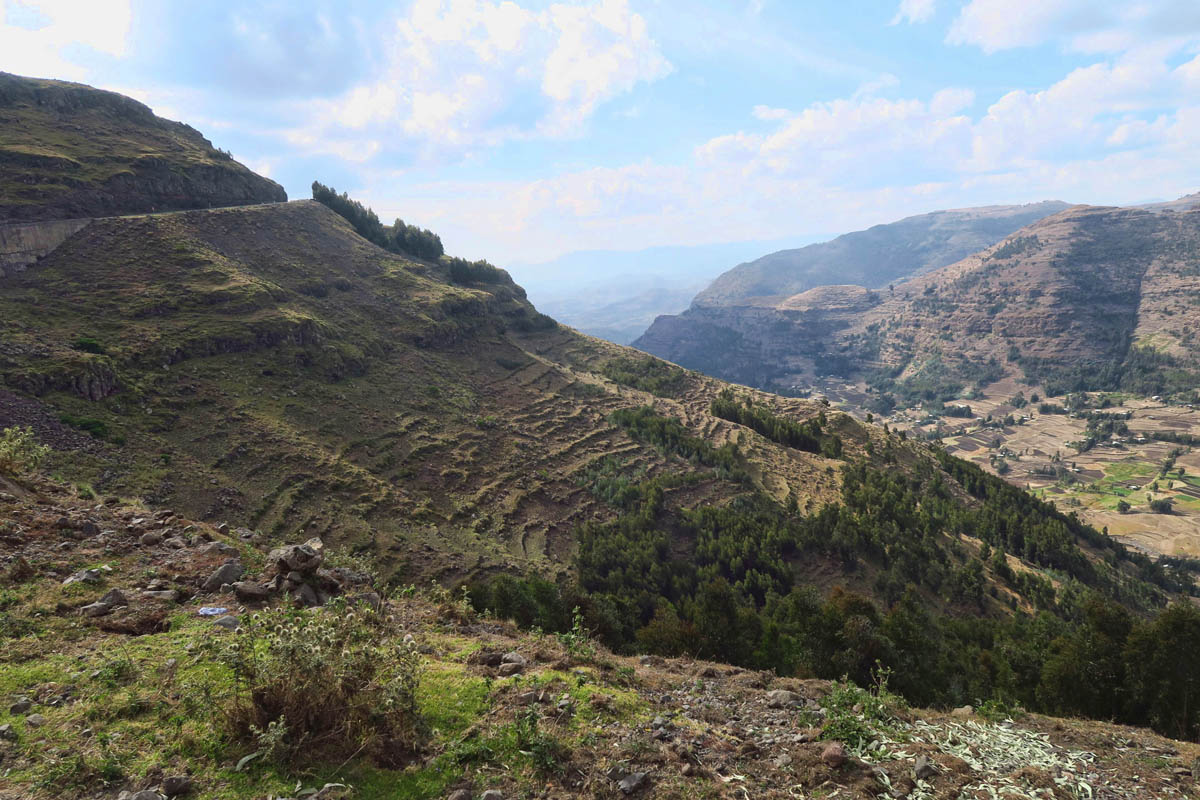 It was a fascinating journey, but it feels good to be “up” again!

Next Up: My reason for wanting to visit Ethiopia…the lovely Lalibela.

8 thoughts on “Salt of the Earth”