I’ve now been moving about the Cloudcroft area for going on two months. One of the reasons it’s been so hard to leave here is because the hiking is to my liking. Not only are trails abundant, but access to the trailheads is easy. Many can be hiked on foot right from boondocking spots without having to drive to the trailhead, particularly the animal trails which proved invaluable during my 14 day quarantine. Others can be accessed from town, or via spacious pullouts along the “Sunspot Highway.” 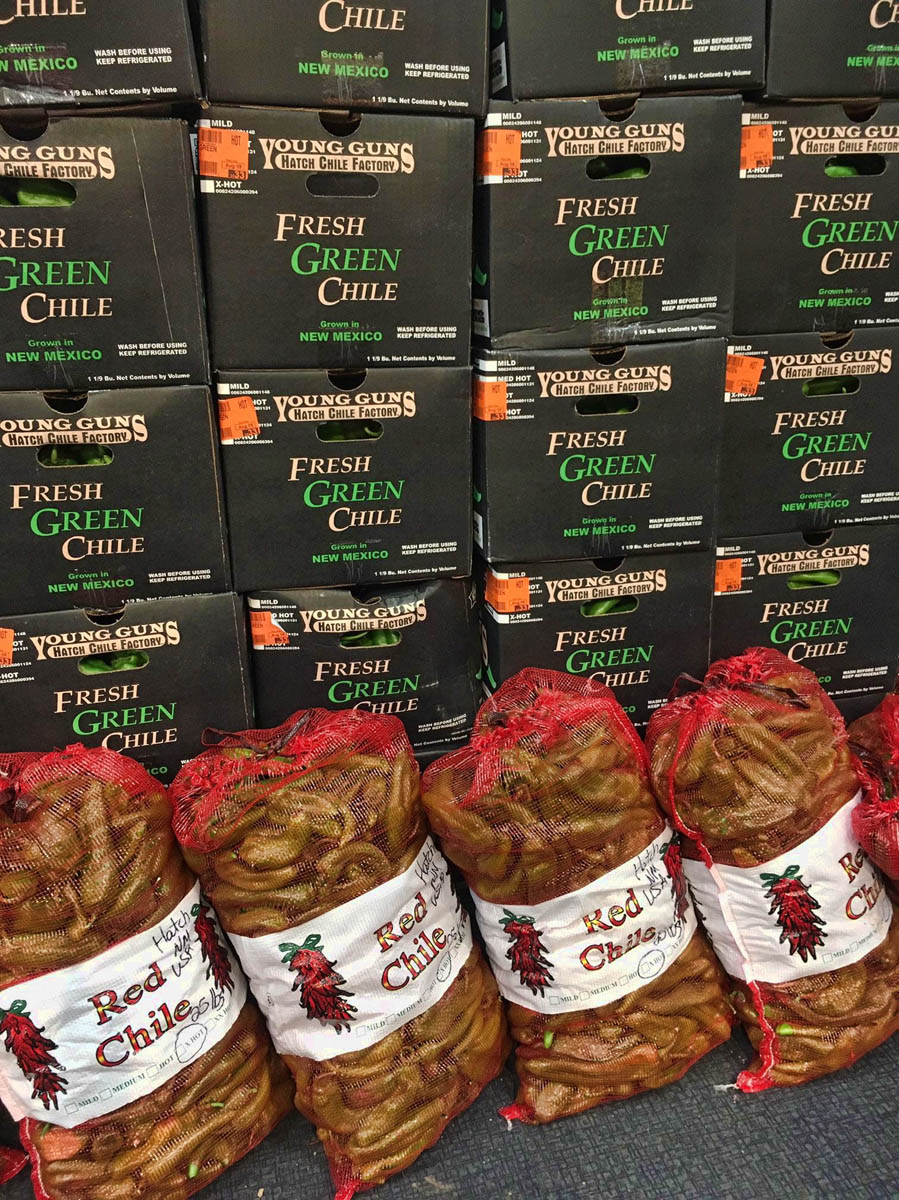 It’s not New Mexico without Hatch chilies. They line the aisles in the Alamogordo grocery store. 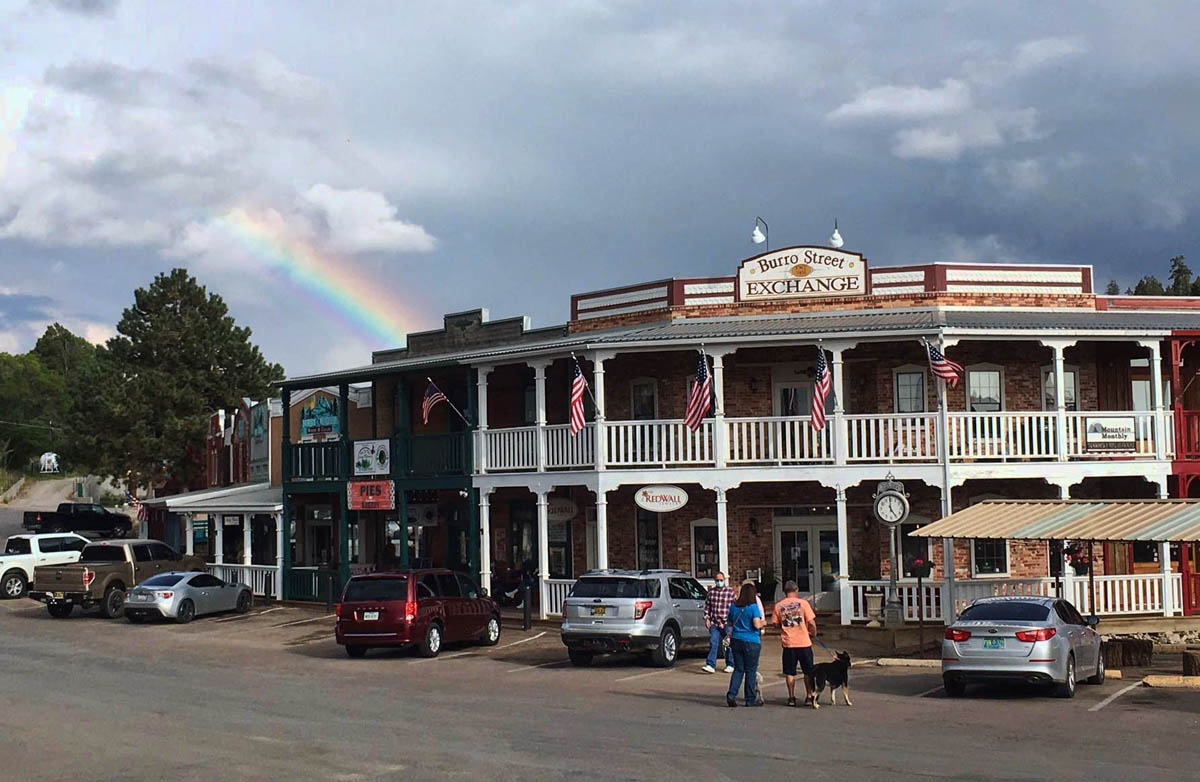 The town of Cloudcroft is very quaint, only a couple of blocks long. Afternoon storms are quick in passing, leaving behind a rainbow over Burro St. 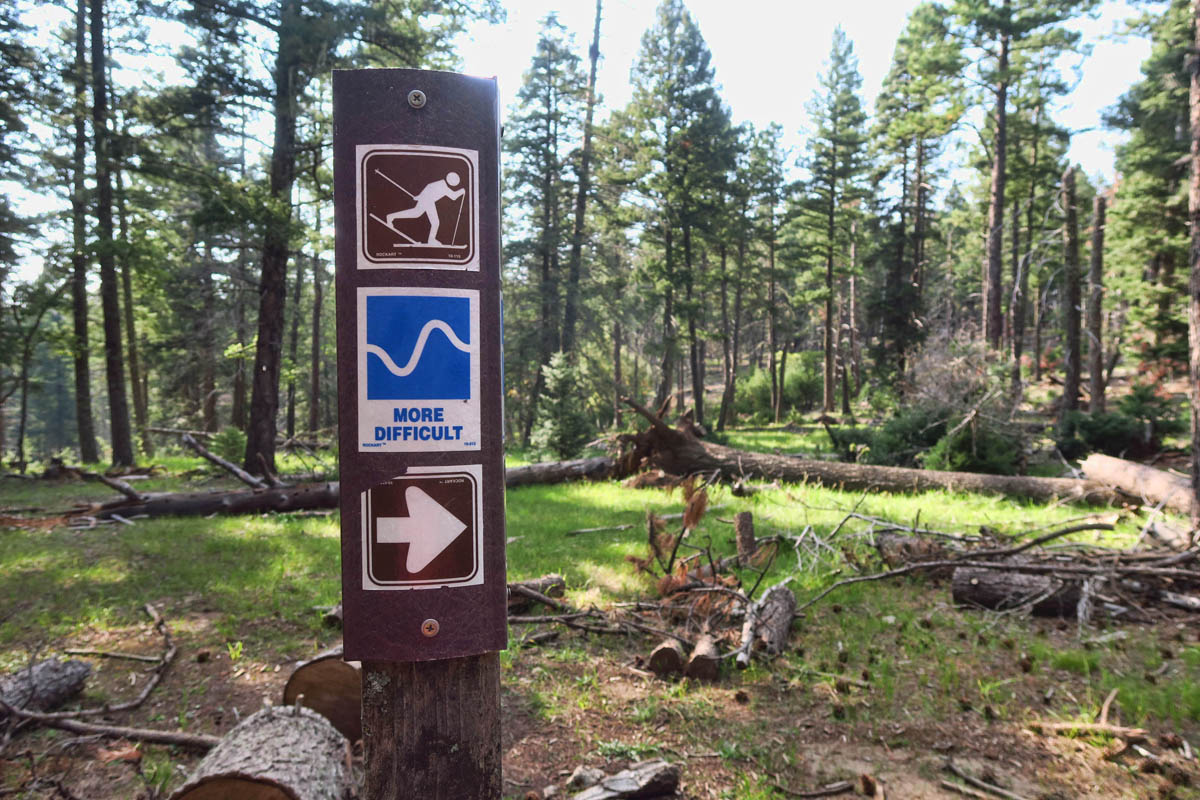 Many of the hiking trails are designated as cross country ski trails come winter. 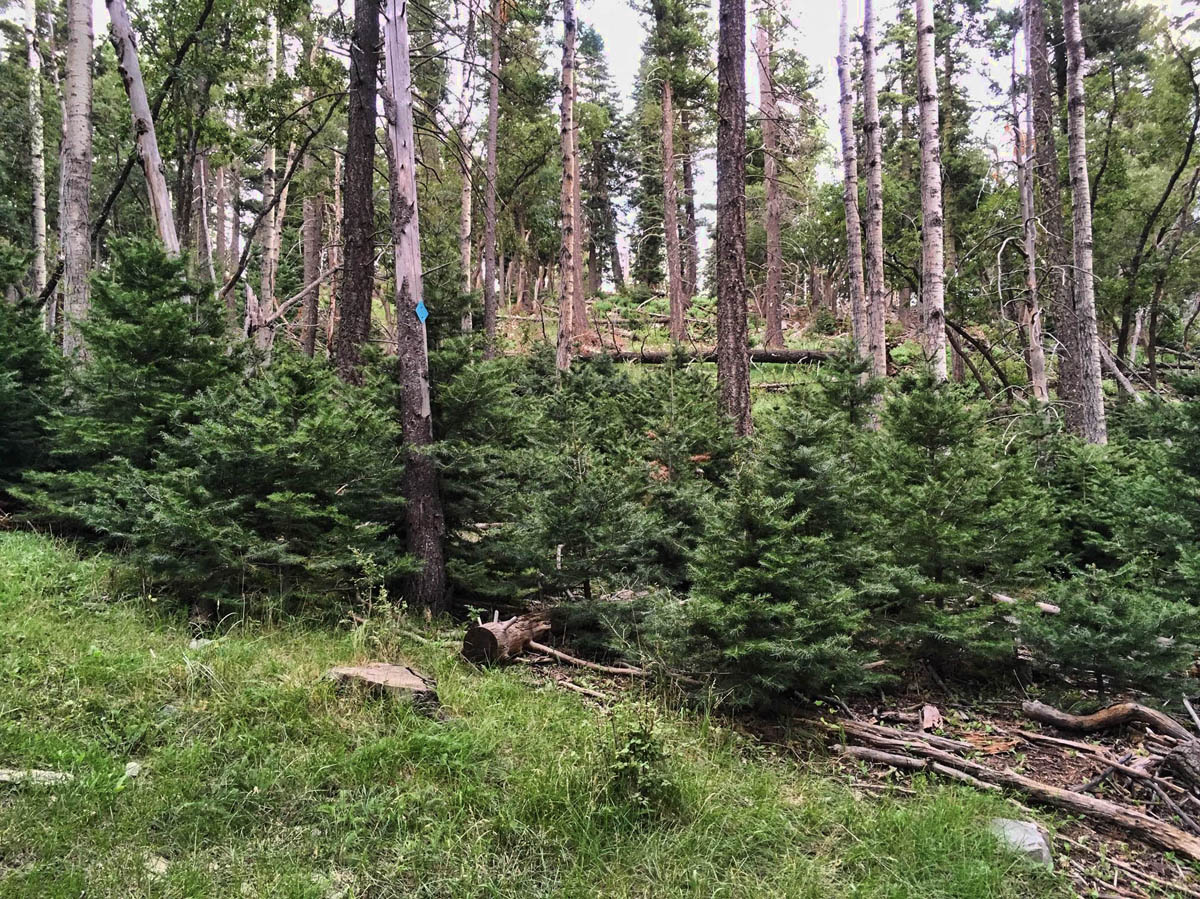 Blue blaze in tree denotes the ski trail, which runs amidst what looks like a Christmas tree farm. Would love to X-country ski this trail in winter! 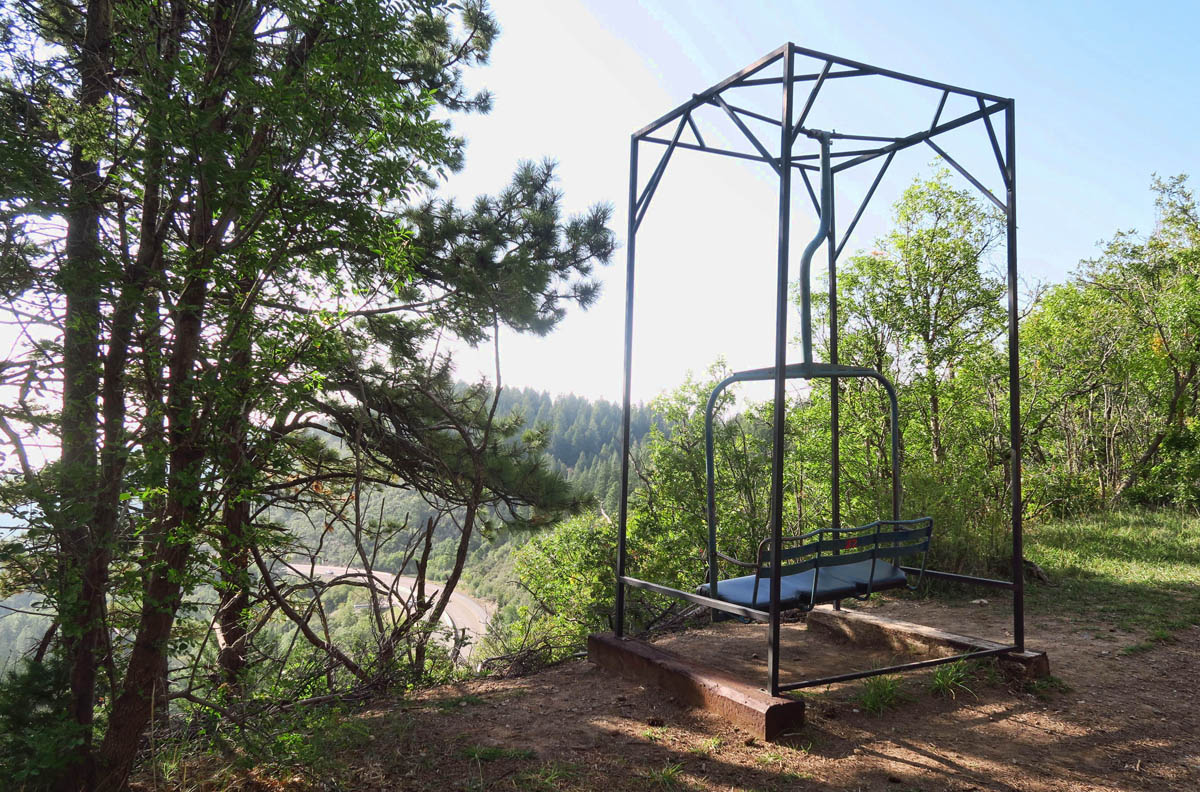 My favorite rest stop along the 4 mile trail into town. 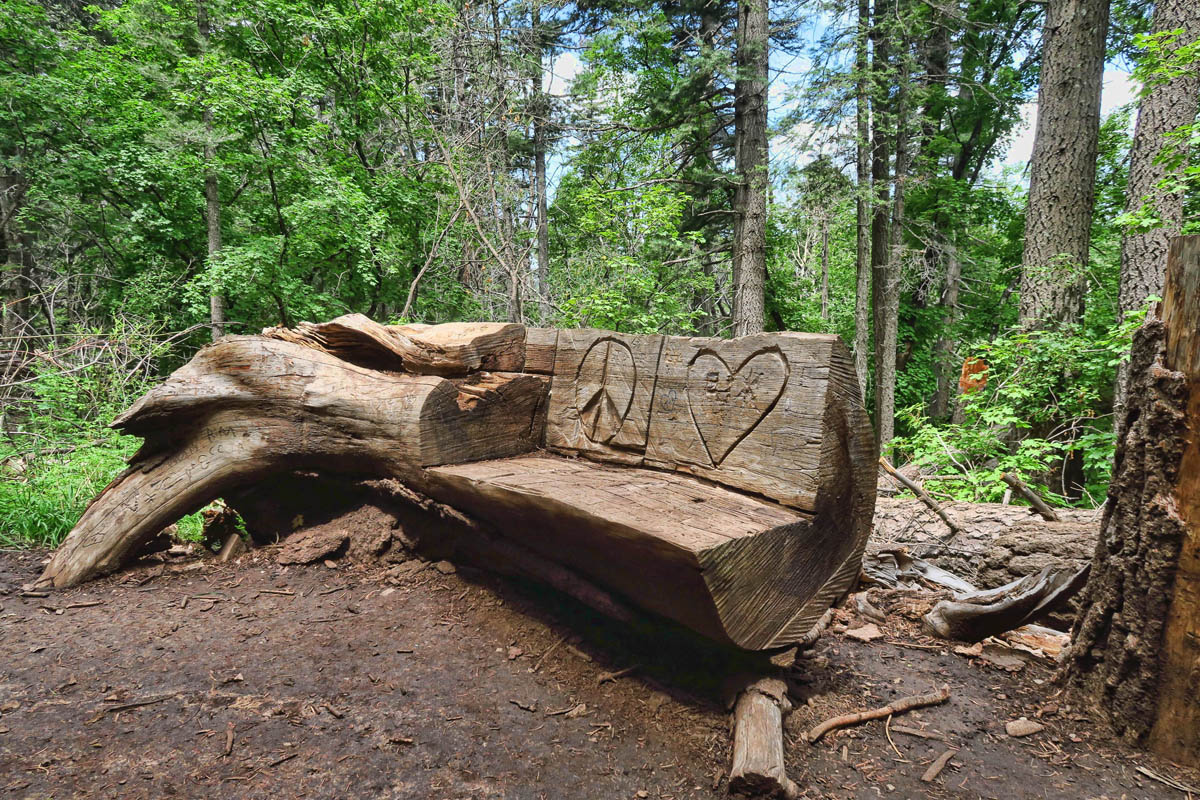 This creative log bench along the OSHA trail is another of my favorite places to stop and reflect on the beauty of the forest. 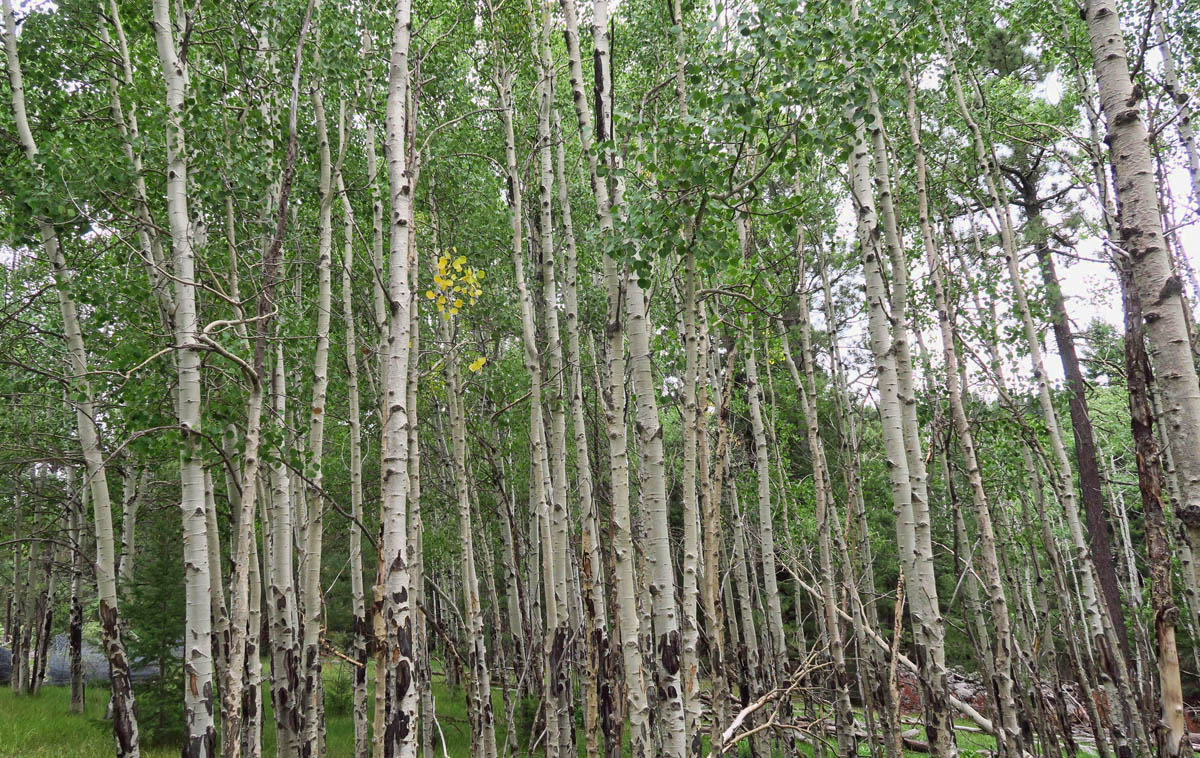 I keep hoping I can last to see this aspen grove turn, but it’s starting to look doubtful. “One little token branch is all you’re giving up?? Come on guys, hurry up!” 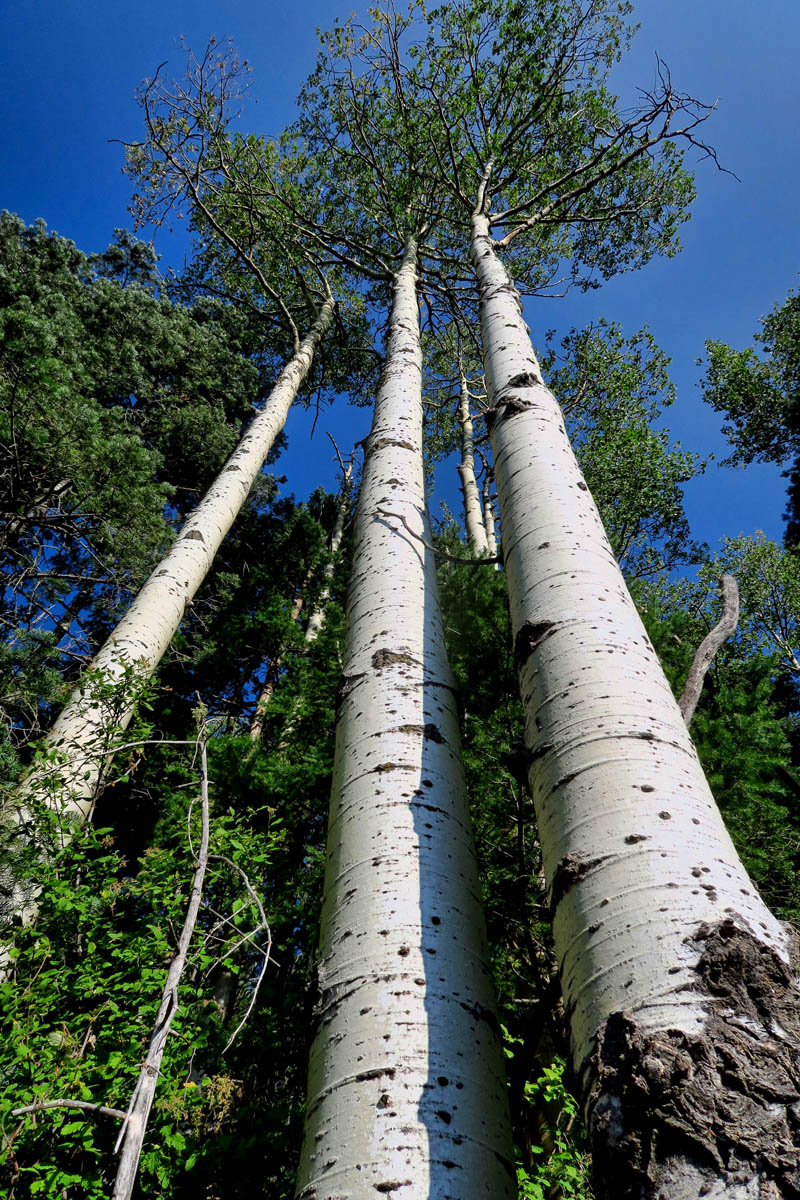 While there are lots of loops and 9,000 ft lung-burners, I have a special penchant for anything related to rail travel, so I have particularly enjoyed hiking the trails that once served as part of the Alamogordo and Sacramento Mountain Railroad. Who could not be fascinated by a train known as the “Cloud-Climbing Railroad?” 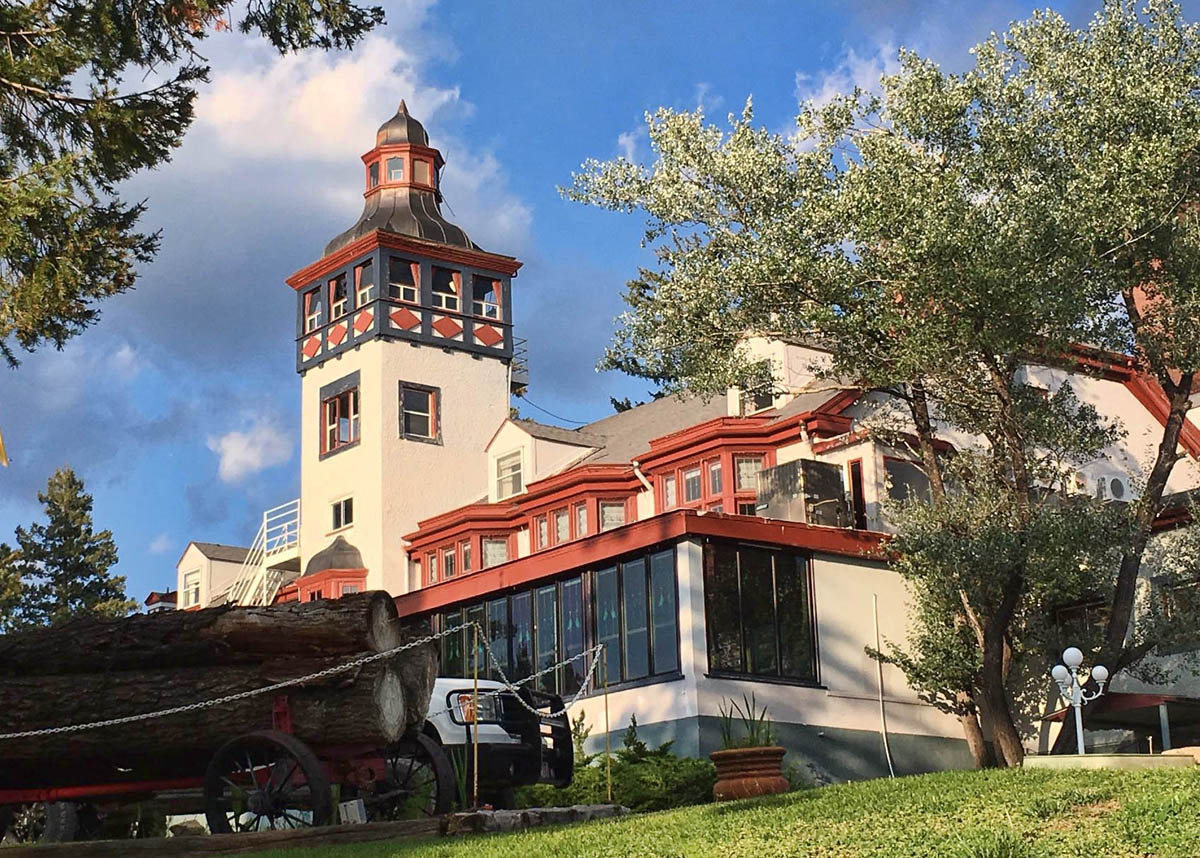 Originally constructed in 1899 by the Alamogordo and Sacramento Mountain Railway, “The Lodge” was a by-product of the railroad. Burned in 1909, but rebuilt in its current site in 1911. There is a gorgeous adjacent golf course with 150 ft vertical drop on the first tee. 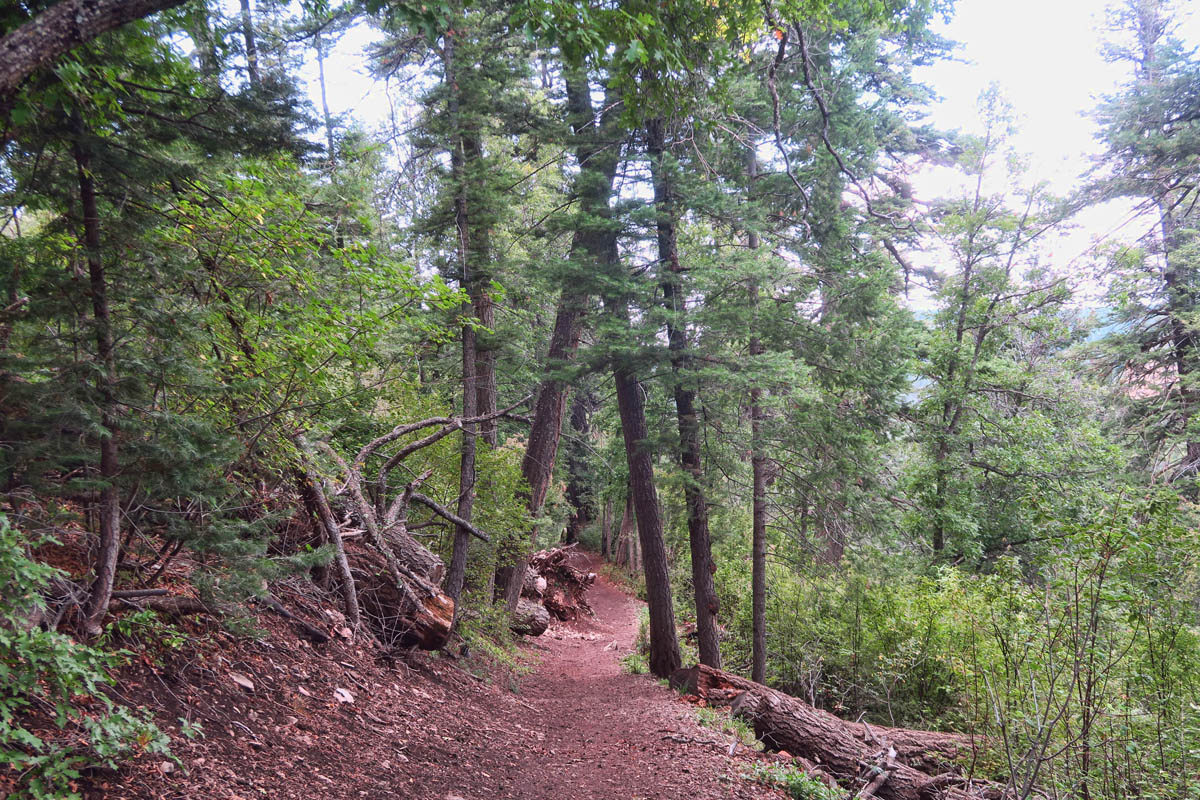 Hike down to the trestle is lovely.

Completed in 1900, the A&SMR climbed to an elevation of 8,700 ft, which at the time was the highest altitude in the world for any standard gauge train. Originally devised as a means to harvest timber from the Sacramento Mountains, the railroad averaged a 5% grade across 122 wooden bridges, 58 timber frame trestles, around 330 curves, climbing 32 miles up 4,000 ft in elevation.

Many of the trails follow the tracks of the Cloud Climbing Railroad. One example of these rail trails is the “Switchback Trail.” This part of the rail track now turned hiking trail required the train to travel in reverse.

But the most famous of the rail trails leads to the Mexican Canyon Trestle. Constructed in 1899, it is the tallest of the 58 trestles built along the route, standing 60 ft high and 323 ft long. All the original timbers were cut from local Douglas fir. The trestle lies just below the town of Cloudcroft. Upon approach, trains blew their steam whistle when crossing to alert the awaiting visitors that the train was 15 minutes from the Cloudcroft station.

Fortunately, the Mexican Canyon Trestle was preserved by the US Forest Service in 2010, and now holds a place on the National Register of Historic Places. One end can be viewed from the overlook from Highway 82, while the opposite end requires a under a three mile RT hike to reach the viewing platform.

Sadly, the most unique of the 58 trestles did not survive long enough for preservation. The “S” trestle with its two combined 30 degree turns collapsed into ruin around 1960. 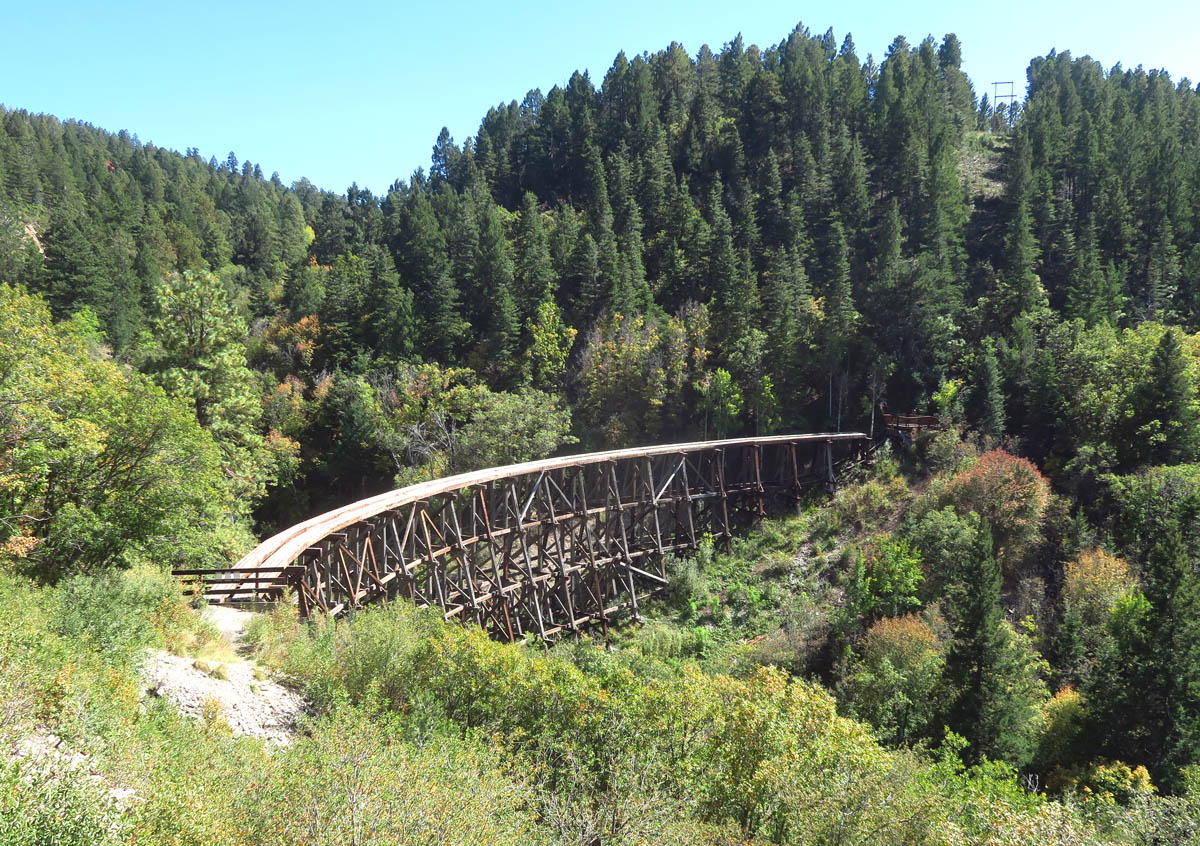 View from Hwy 82 of the Mexican Canyon Trestle, built in 1899 and in use until 1947 by both logging and passenger trains. 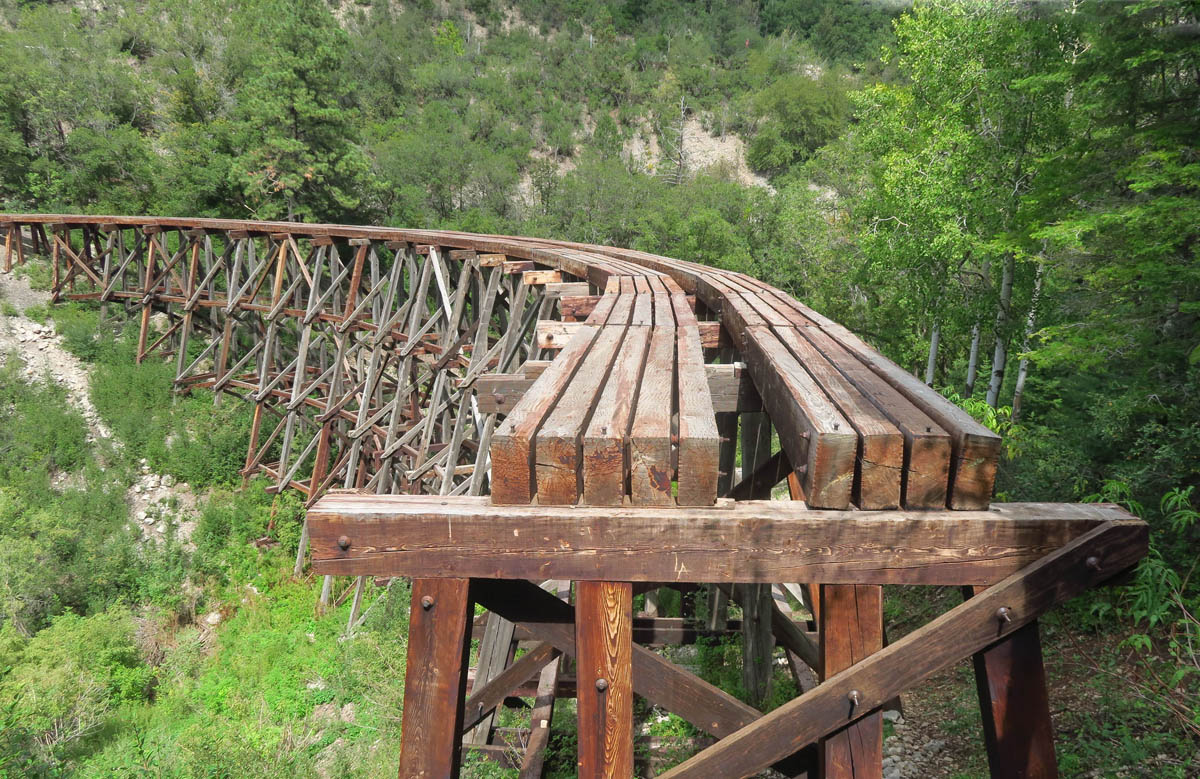 In order to get down to the Mexican Canyon Trestle, you must hike down into the canyon for 1.3 miles. Continue on down and up and around with other trails to make different loop hikes. 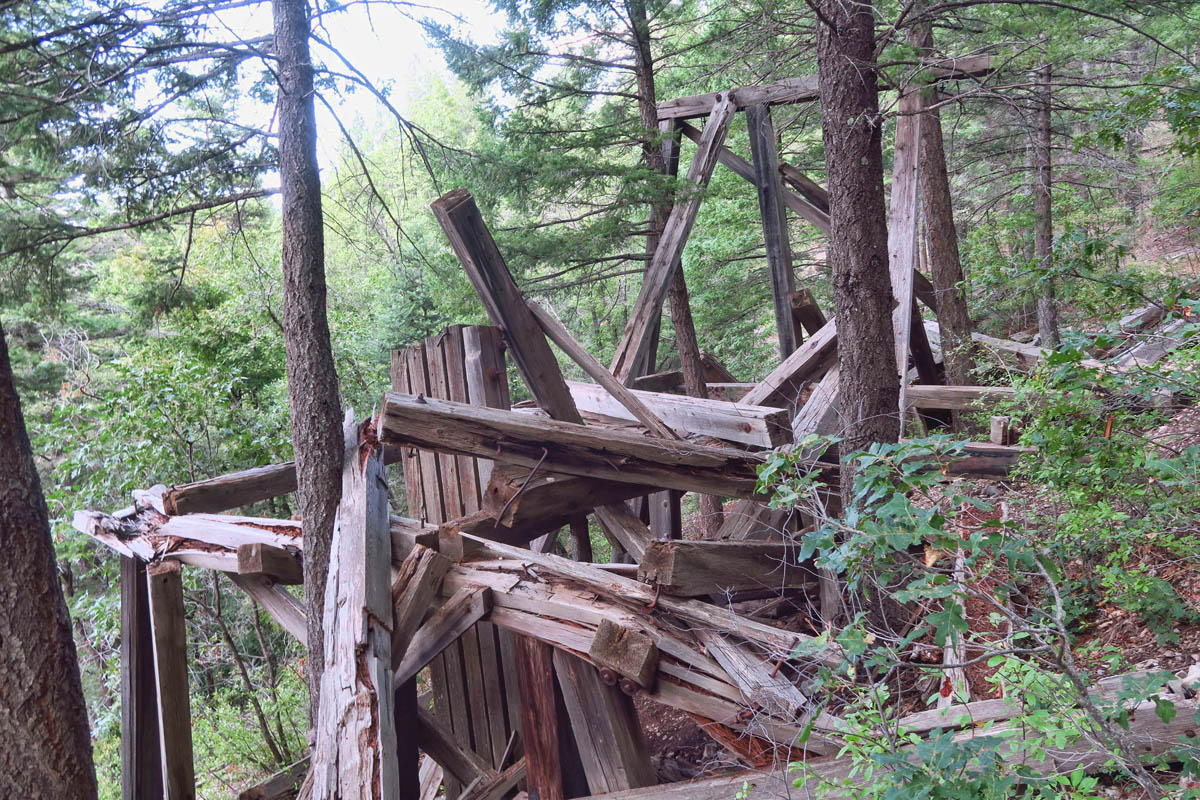 Sadly, the unique “S” trestle did not survive. It collapsed around 1960. 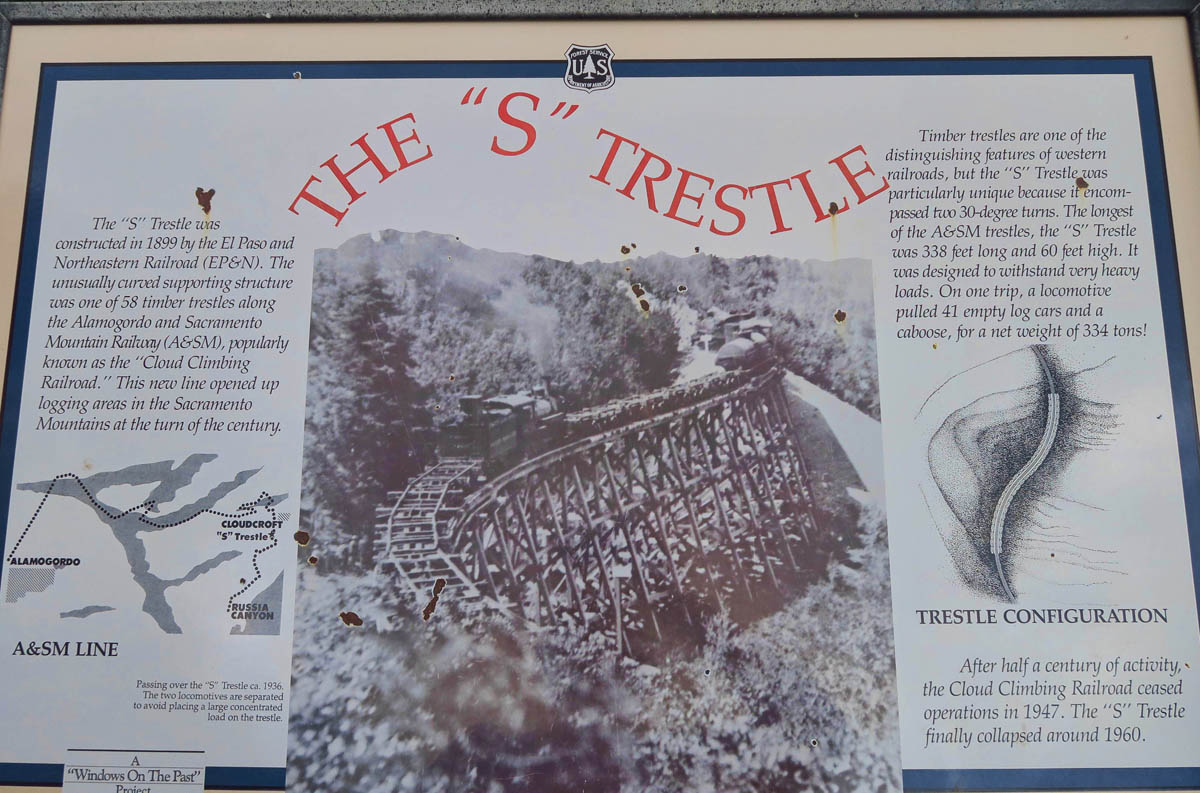 I would have loved to see this one with it’s 30 degree “S” turns. 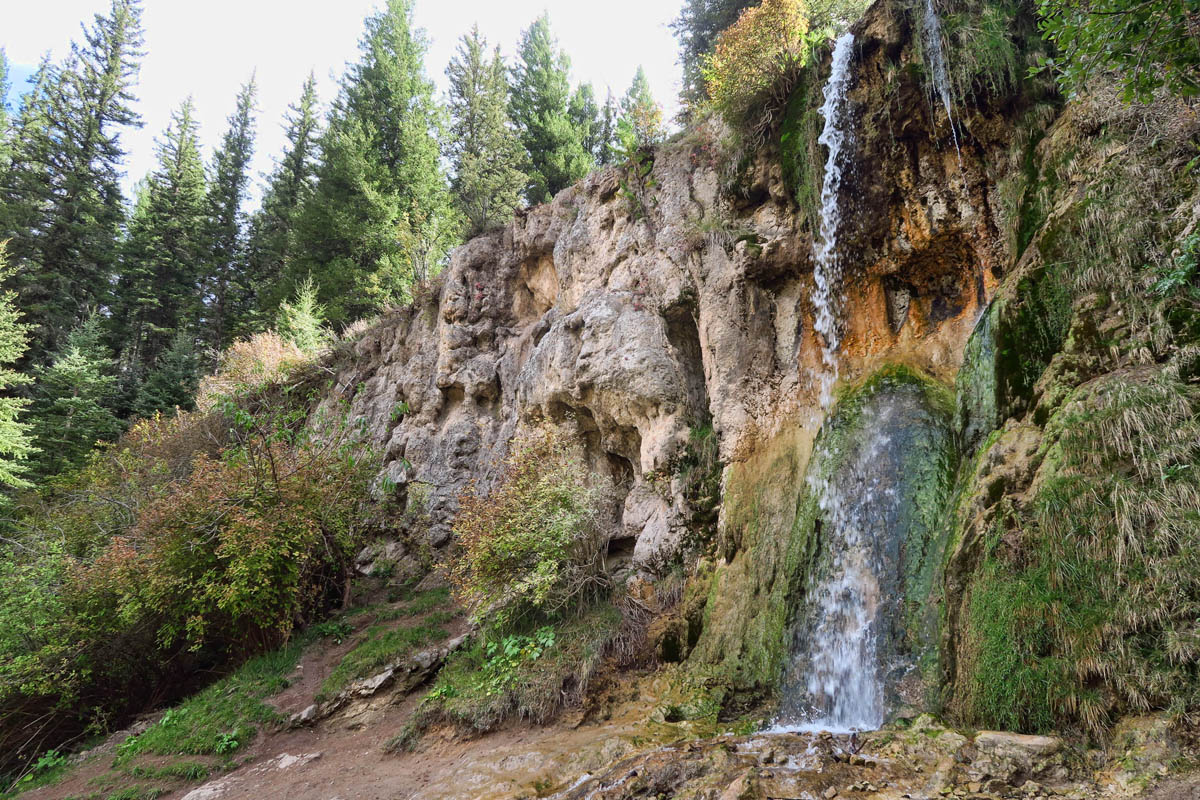 This is the beautiful Bluff Springs. You can camp all around here, and the road is in great condition. The only caveat? Zero signal, which is no doubt why it’s not an RV parking lot. 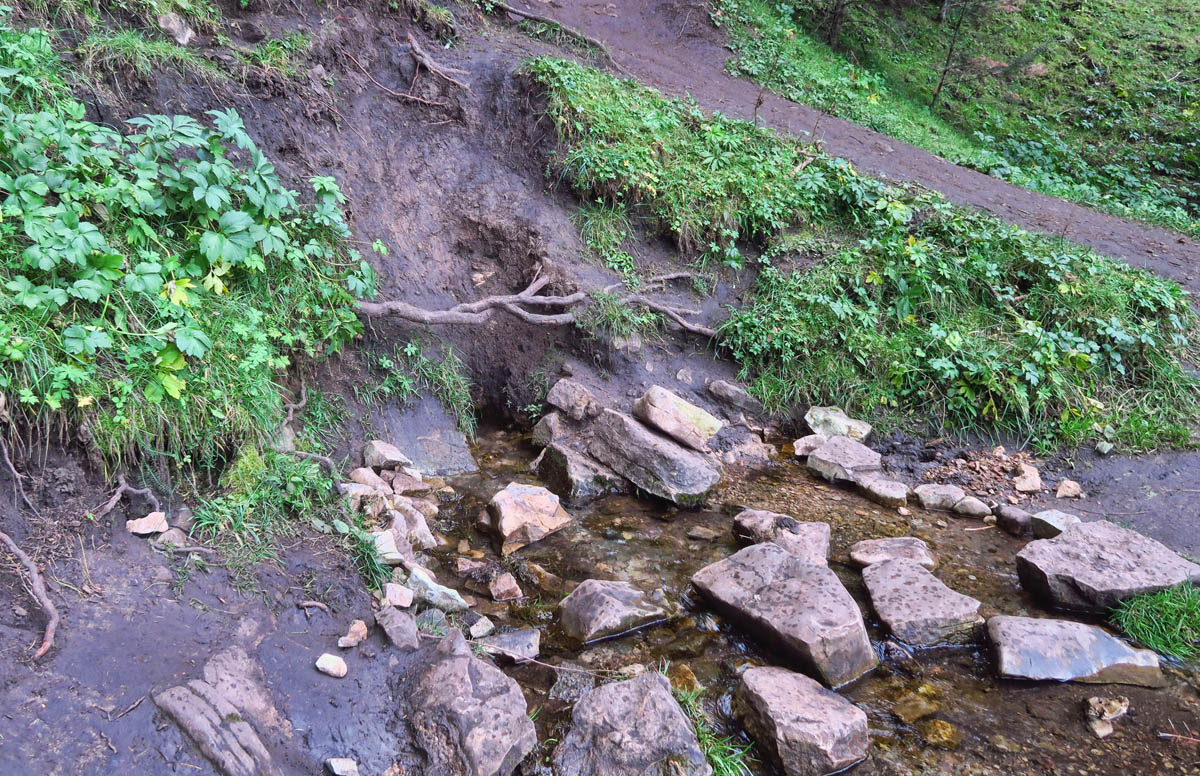 Atop the hill is the source of the spring. Impossible to show in a photo, but it’s coming out of this hole at a pretty good flow. So tempting to take a drink! 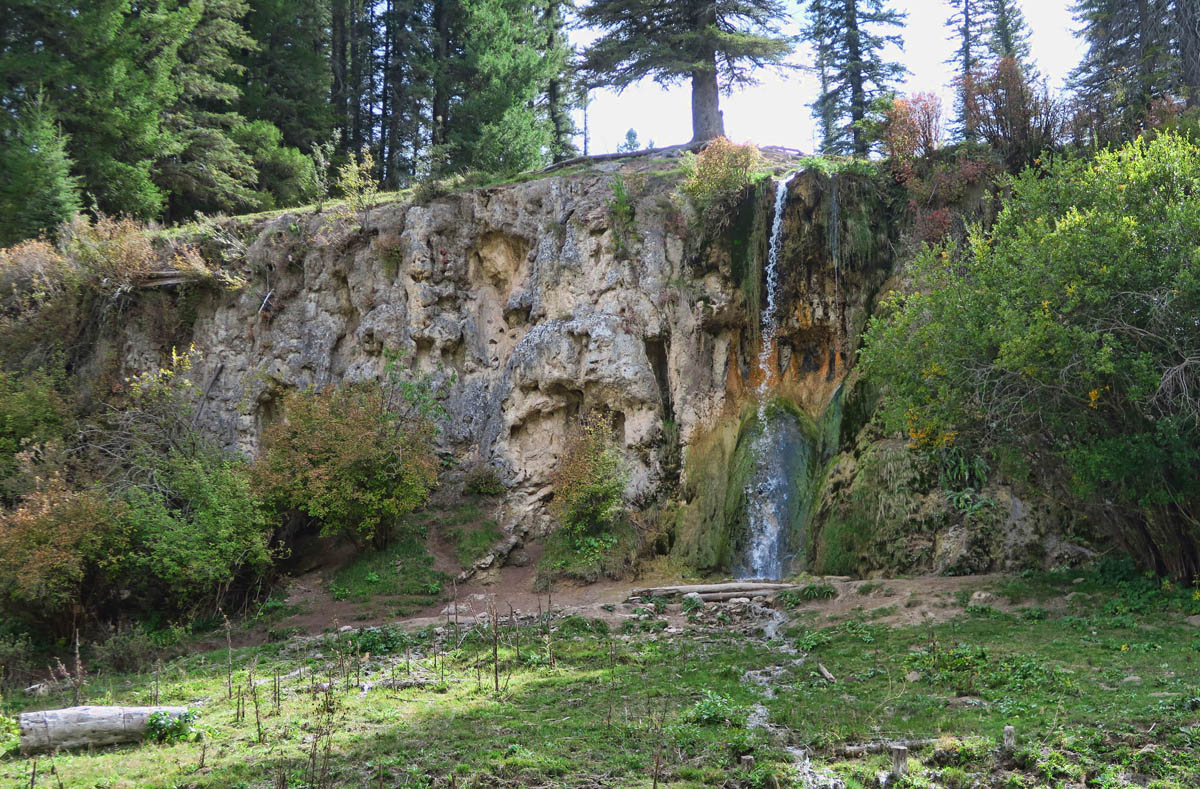 From the spring, there is another rail trail, the Willie White Spur that follows and old railroad grade to the east. 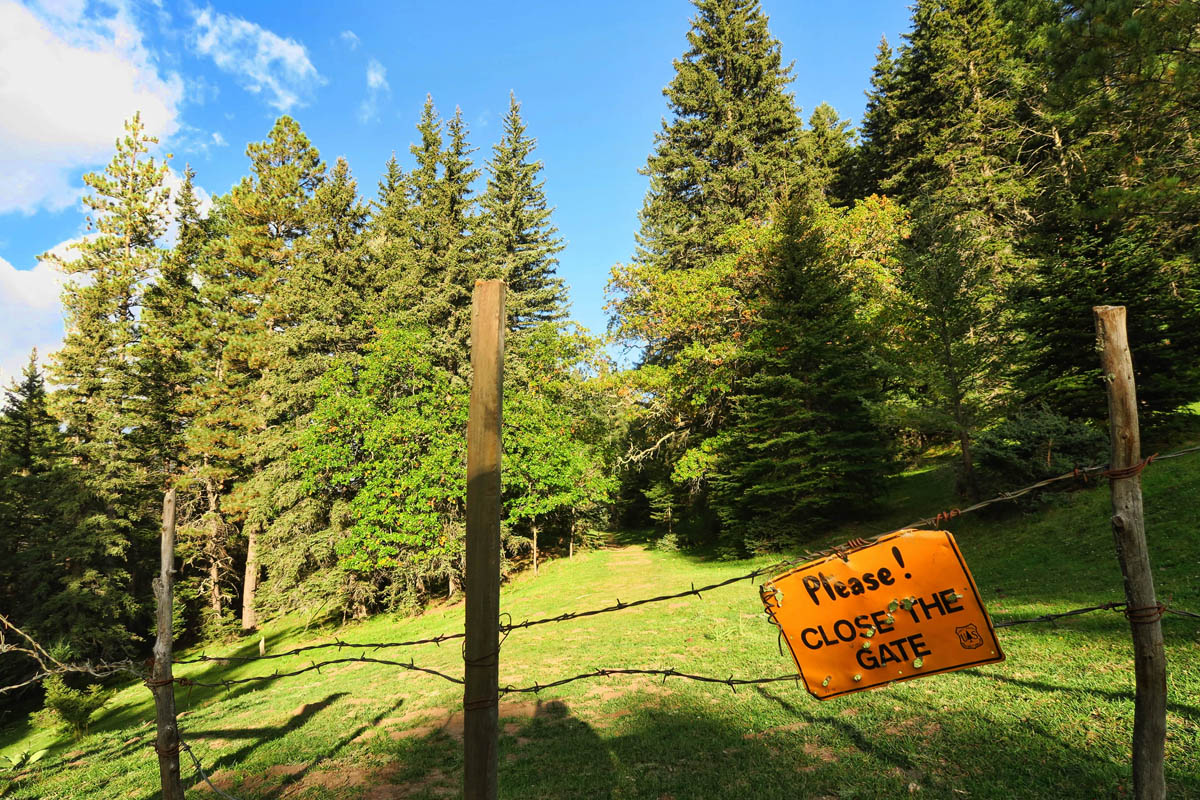 I am a bit more uneasy now, as bow hunting season has started. Now hiking in day-glow orange.

Another of my favorite trails around Cloudcroft is the Rim Trail. Sources vary on the actual length of this trail, as it was 14 miles back in 1968 when it was officially established. However, it has been gradually extended, with the most up to date terminus I could find on a current map or app being Sacramento River Road south of Sunspot, making it a little over 30 miles long now.

I started out with the intention to hike the entire length of the Rim Trail. It’s a little like a fun puzzle in that I must piece it together, often with only the aid of my Gaia GPS app. While there are five officially designated parking areas for the trail, they are not always spaced an equal day hike apart, particularly when I must hike both “out and back.” Ideally, one would have a hiking partner to drop off a second vehicle, thereby allowing for a one way hike. And parking areas are not as easily accessed once one gets toward the newer sections of the trail, often requiring a lengthy hike just to intercept the Rim Trail. I have currently reached the end of the original trail at mile 14, which means a total of 28 miles out and back. However, I am in a dead heat race with the weather forecast to see who wins. Nights are getting cold sleeping in a poorly insulated Nabisco box! 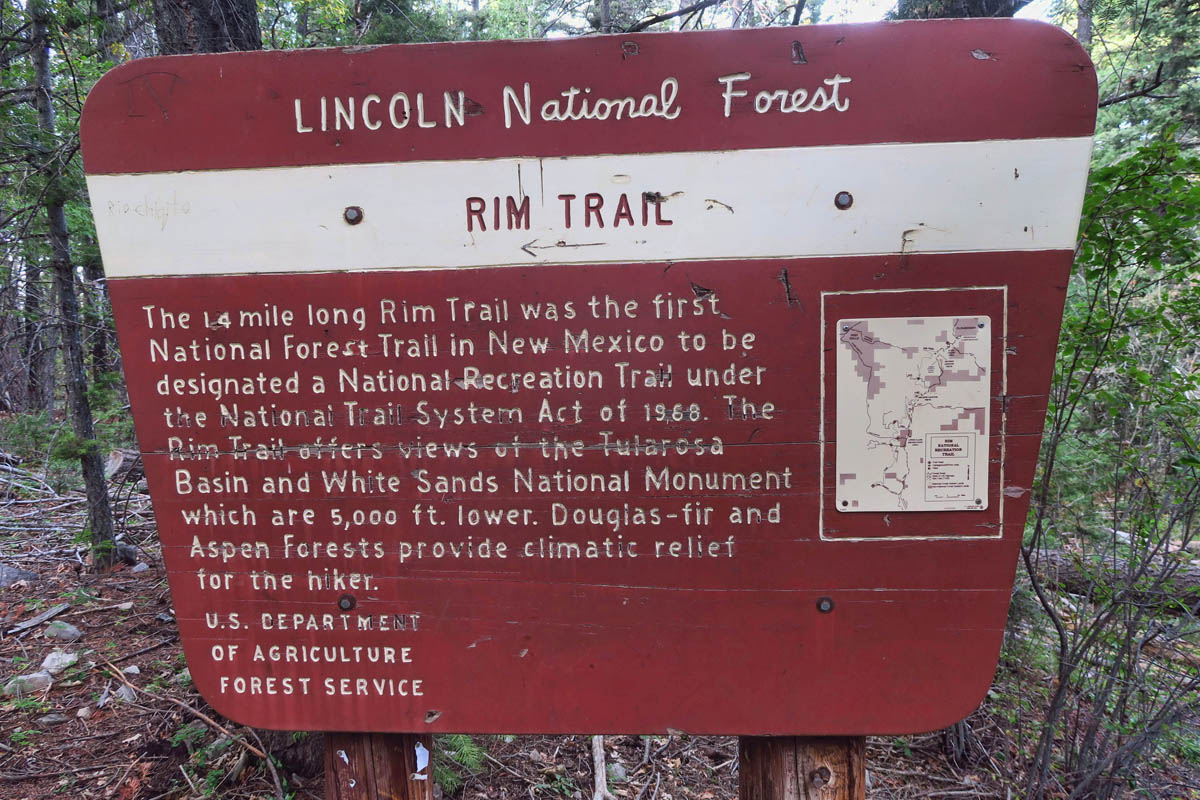 The Rim Trail has significance of being the first National Forest trail in New Mexico to be designated as a National Recreation Trail under the National Trail System Act of 1968. 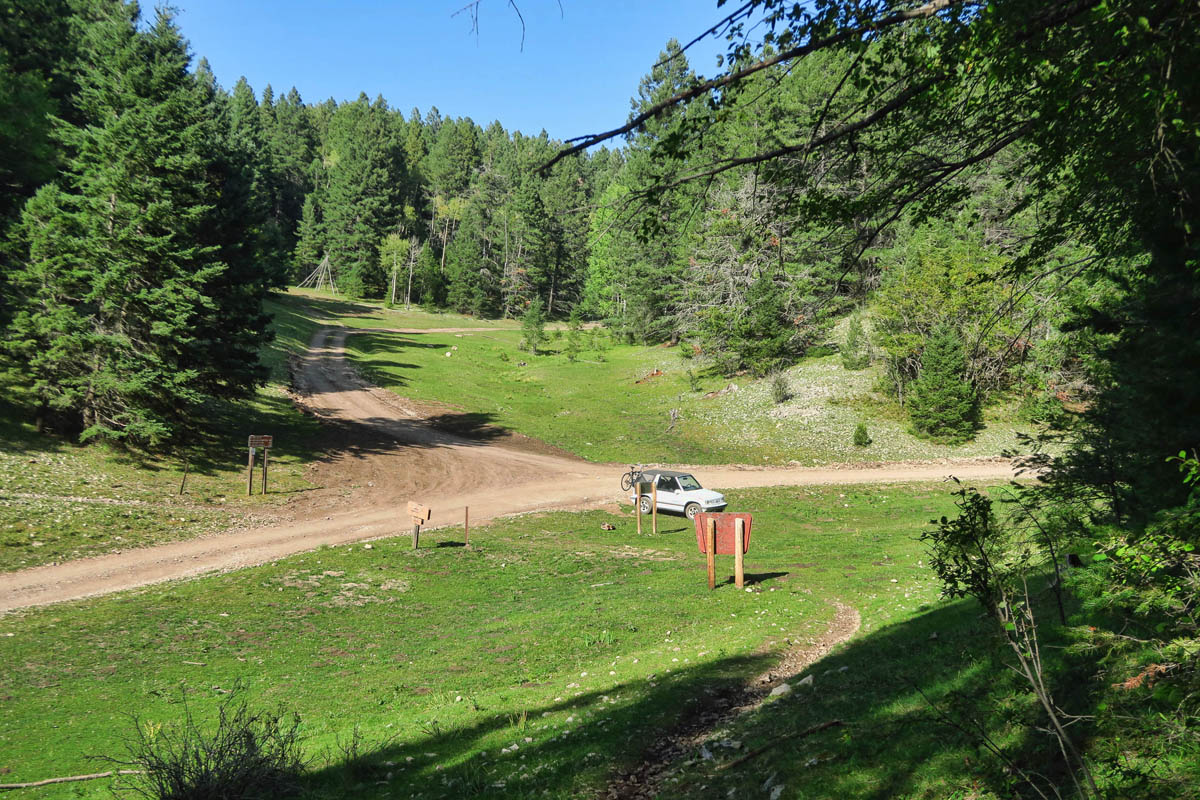 The further away from town one gets, the more challenging it is to find the Rim Trail trailheads. This requires finding the trail on the GPS, along with nearest Forest Service Rd intersection. 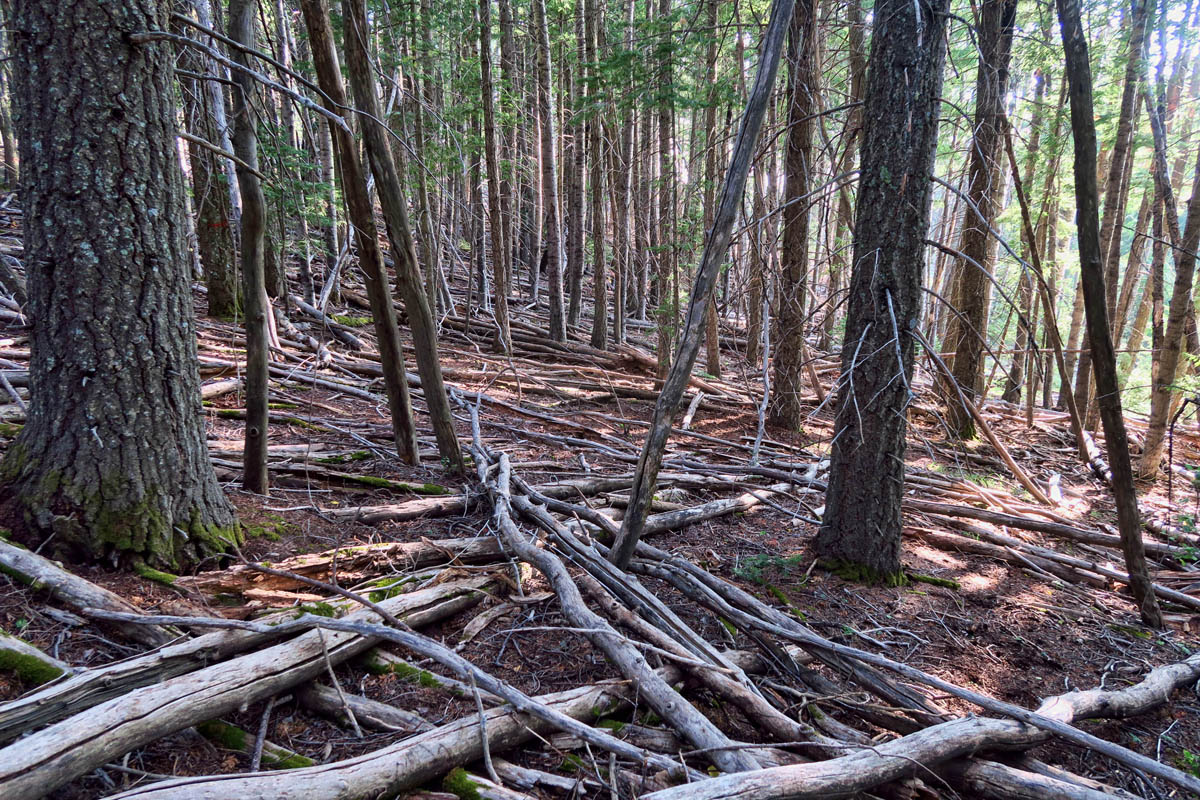 Whenever I hear “You must rake the forests to prevent fires,” this is what I think of. I wouldn’t want the job of raking this forest! 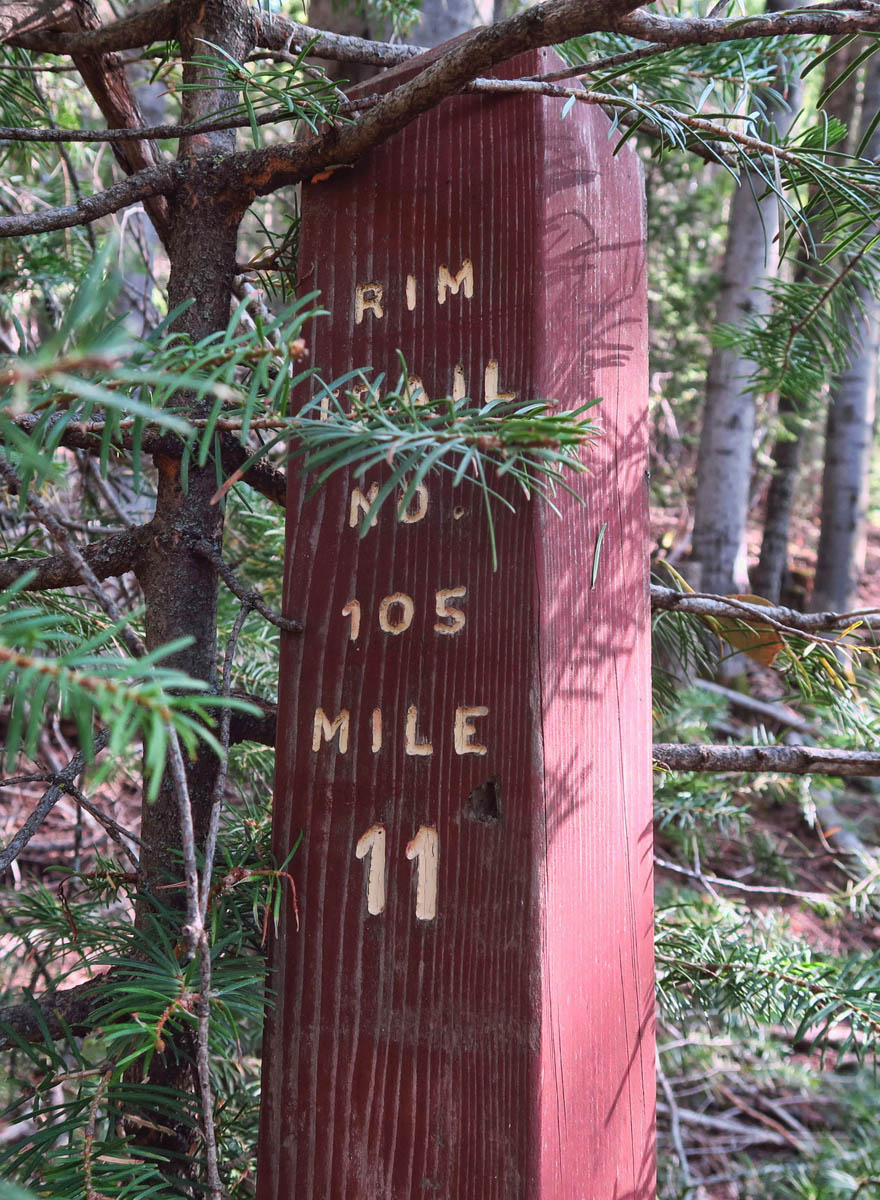 I rarely see anyone on the Rim Trail. In fact, I’ve seen more animals than I have people.

While hiking the forest trails of Cloudcroft, I have seen elk, deer, wild horses, and even a small brown bear! But by far the most bizarre encounter happened to me on a hike at the end of August along the Rim Trail.

It was my deceased brother Stephen’s birthday. As a celebration of his life, I always like to go on a hike each year carrying his hiking poles, and wearing his favorite “Cabela’s Guidewear” cap. I commemorate the event with one-way conversations, always telling him I hope he enjoys coming along for the hike I have picked out to mark the day he was brought into this physical realm. I always end the day toasting his memory with a beer, as that was his beverage of choice.

About halfway into the hike, I caught a fleeting glimpse of something ahead on the trail. I could not only see the fluttering, but could hear rustling. As I rounded the corner, the disturbance took off for the tree above, but I was still too far away to tell what it was, or how it got there. Once I got closer, I realized it was an owl perched on an overhanging limb right over the trail. This struck me as being a bit eerie, as I thought owls were nocturnal. This one did not appear to be injured in any way, nor did it appear to be skittish. In fact, it was quite bold in its behavior.

My Mom always muses that our deceased loved ones come to visit us in the form of cardinals, which happens to be her favorite bird. So I thought maybe in my case, it was an owl, and I should sit down and have a chat. After all, my brother spent his entire life being called a “night owl.” So I decided I would wait out the owl, staying until it flew away. Or at least until its staring contest was over. I finally gave in.

Later that afternoon while enjoying an Oskar Blues G’Knight Imperial Red IPA at the outdoor seating area of Dave’s Café, I couldn’t shake the sighting, and how odd it all seemed. So much so that I filled the time while enjoying my beer by googling “the spiritual significance of owls.” One source says, “Some Native American tribes believed that this nocturnal bird accompanies the dead in their journey to their afterlife.” No doubt, that would be just like my brother to try and spook me. 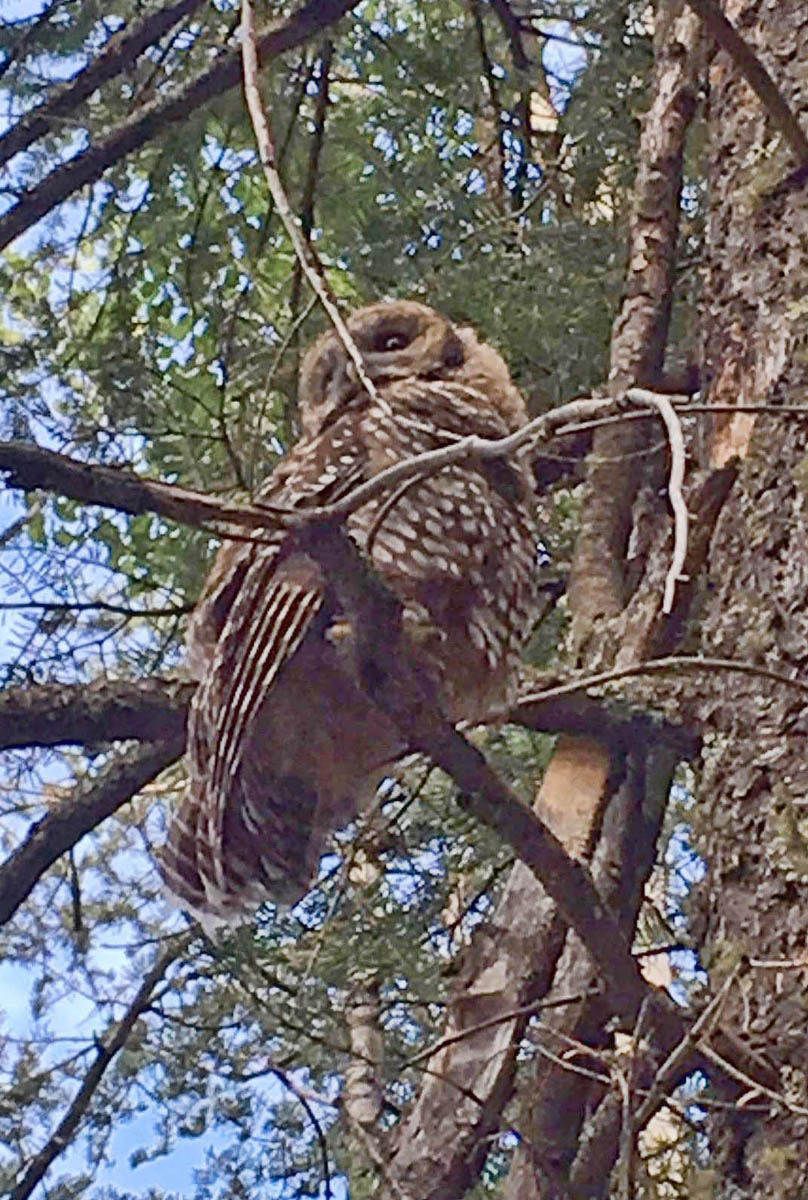 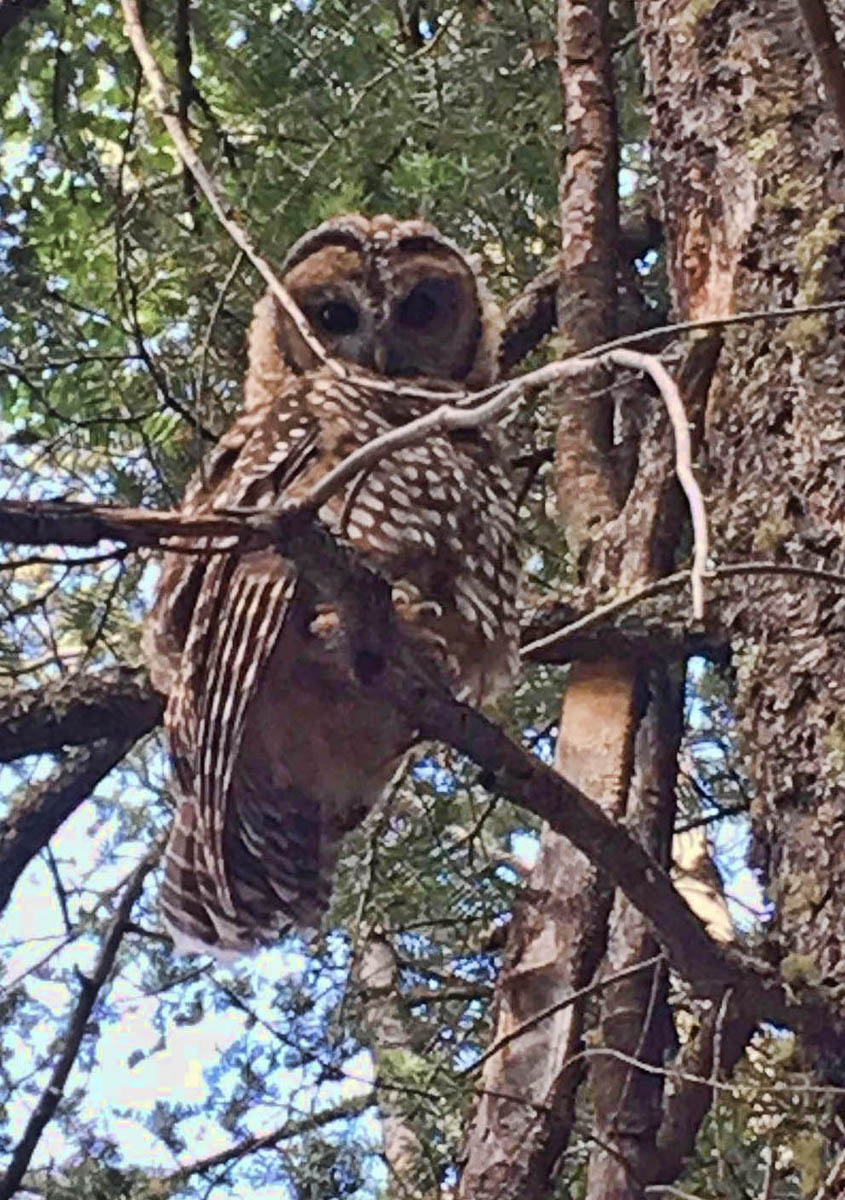 He never broke eye contact the whole time I was talking to him.

I recently discovered this poem on friend and fellow blogger Sue Malone’s Facebook page. Having spent nearly two months in the Lincoln National Forest admiring, communing, hugging, and talking to the trees, the poem resonated with me, so I am putting it here so I don’t forget it.

When I am Among the Trees
by Mary Oliver

When I am among the trees,
especially the willows and the honey locust,
equally the beech, the oaks and the pines,
they give off such hints of gladness.
I would almost say that they save me, and daily.

I am so distant from the hope of myself,
in which I have goodness, and discernment,
and never hurry through the world
but walk slowly, and bow often.

Around me the trees stir in their leaves
and call out, “Stay awhile.”
The light flows from their branches.

And they call again, “It’s simple,” they say,
“and you too have come
into the world to do this, to go easy, to be filled
with light, and to shine.”