One of the most unique attractions on the island of Dominica is the Boiling Lake, believed to be a flooded fumarole, a crack through which gases escape from the molten lava below producing a bluish gray boiling lake, accessible only by an eight mile, six and a half hour round trip hike. I had actually increased my level of activity prior to my trip, hiking hills and flights of stairs at the nearby school in anticipation of seeing this unique attraction. However, once I arrived and started talking to other travelers who had completed this hike, I began to have second thoughts. I wasn’t concerned about the long distance, as I do well at endurance hiking. What concerned me was the constant up and down steep steps carved into the mud. I knew I would be okay as long as there were some flat stretches mixed in to rest my knees. The problem was, there WERE no flats on this hike. It was constant up and down, the most difficult part 3,100 feet up the side of a muddy mountain.

I booked a guide anyway, thinking I would talk it over and get his best opinion. His assessment was that yes, I could do it, but I would be “good for nothing” for 2-3 days after the hike. Given that the close proximity to this lake fell in the middle of my trip, I really didn’t want to risk being in bed for two days afterward when I was there to enjoy and have fun!

My guide, Alfred, suggested I do an interim hike to Middleham Falls, as this 2-3 hour round trip hike with lots of ups and downs would give me an idea of how I would feel the next day. If I made it with no problems, he assured me that I could do the Boiling Lake hike later on toward the end of my trip. The problem was, with Tropical Storm Irene looming in the forecast and my guaranteed reservation on the other side of the island, I knew there would be no “later on in the trip.” My one narrow window had just closed. 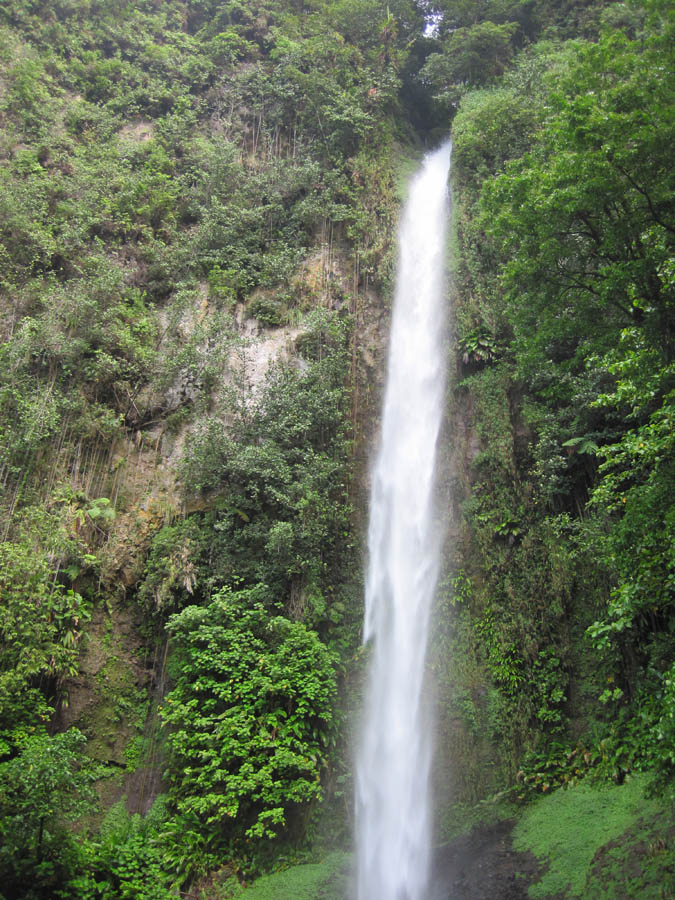 Upper Half of Middleham Falls 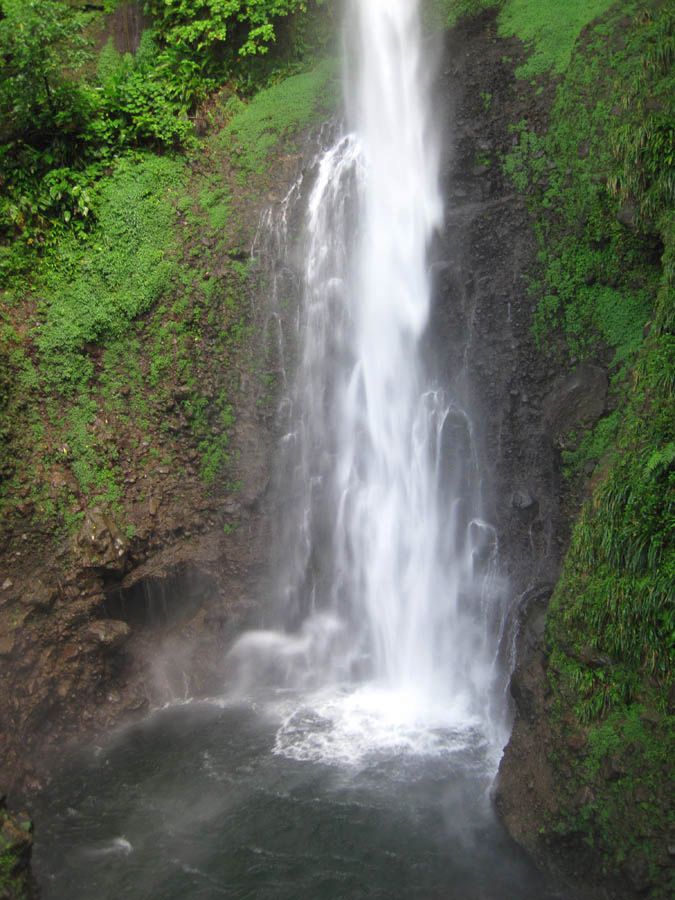 Lower half of Middleham Falls

Though no where near as unique, the Middleham Falls hike was an incredibly beautiful consolation hike. The highest “accessible” falls in Dominica, (the highest has no path or access) it cascaded down, bouncing off a sheer cliff face for over 200 feet. The hike through the rain forest was fairly strenuous with a lot of ups and downs, however my young guide Nathan (Alfred’s son) was so kind to take it slow, stopping along the way to point out certain indigenous trees and plants, and explain the history of the Middleham Estate. 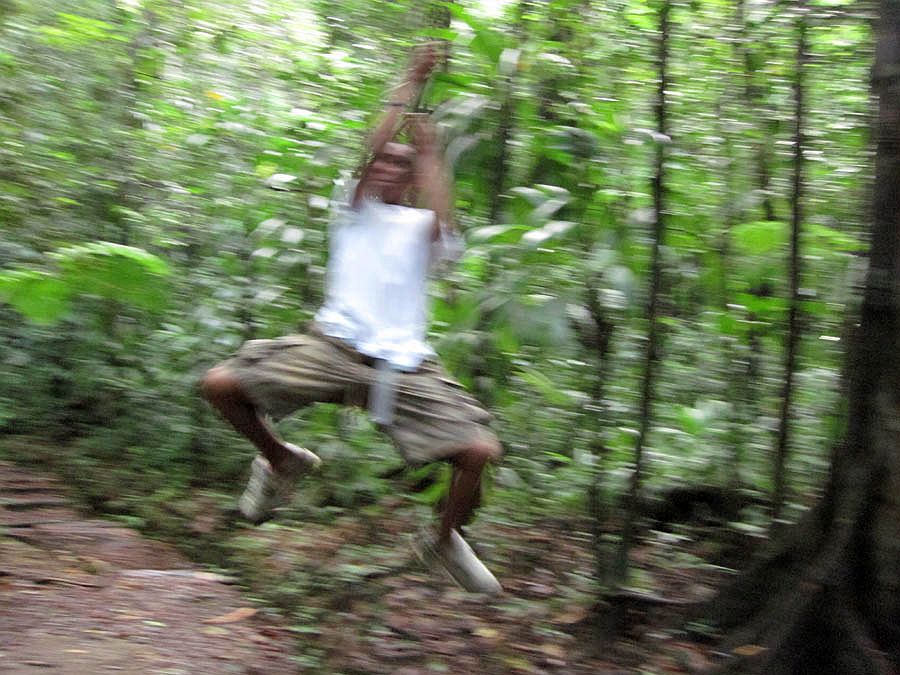 Nathan blurrs across the path doing his best "Tarzan" immitation

Nathan was quite a remarkable young man, about to graduate college. He was born with severe scoliosis, but a visitor to the island had arranged for a charitable operation in Massachusetts to correct the curvature of his spine. Nathan, now understandably a Red Sox fan, seemed to enjoy telling about the miraculous plates and bolts in his spine that allowed him to now enjoy the outdoors and his beloved soccer.

Once we reached the falls, Nathan did not want to come up on the platform because he “didn’t want to get wet” from the falls spray, yet I was soaked even before we got there due to the strenuous climb to reach the falls, ups and downs, crossing two rivers, “bouldering” to get over large boulders, mud up the sides of my legs while his white tee shirt was still spotless. He made this look so easy that I realized the Boiling Lake hike would have indeed been a stretch for me. 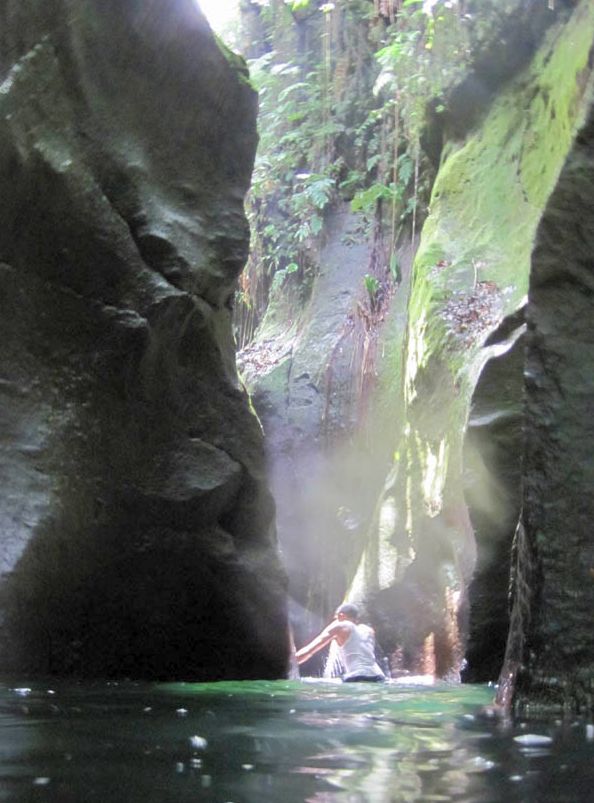 After the hike, Nathan suggested we swim the Titou Gorge to cool off. This “gorge” is actually a chasm from an extinct volcano that split open as the lava cooled. Only about 5 to 6 feet wide, it has a pretty deep river running through it from a small hidden waterfall deep within the gorge. It is possible to swim against the current to the base of the falls, then relax and float back down the gorge. 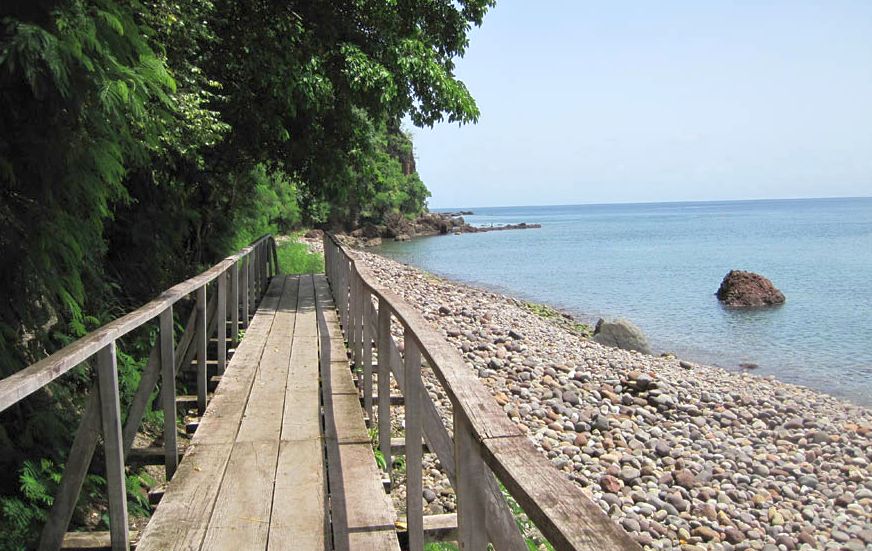 Since we had gotten such an early start, we finished both hikes before noon. The sun was brilliant, my first day without a cloud in the sky, so I didn’t want to waste my one pure sunny day in the rain forest. I grabbed my snorkeling gear and took off for the 40 minute drive to “Champagne Beach” where there are gaseous vents in the rocks, giving the effect of snorkeling in “champagne,” The fish life or coral was not that great, but it was fun to hover over the bubbles and get “tickled.” The Caribbean side was clear, refreshing, and flat calm, so I floated, swam, and bobbed for almost two hours. 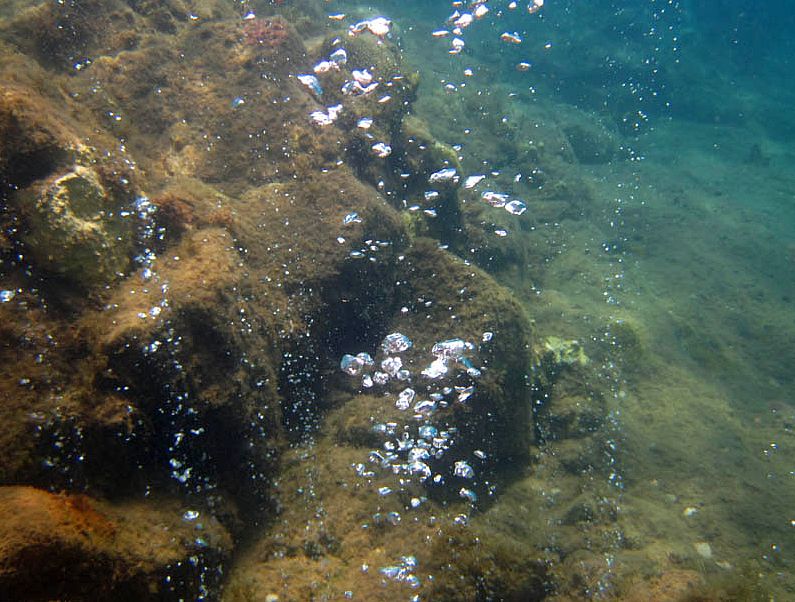