As if a hot air balloon ride wasn’t enough of a birthday indulgence, I decided to treat myself to a spa day.  After all, the balloon ride was on Sunday, which enabled me to rationalize a special treat for my “official birthday” on Tuesday.  I had a tough time deciding between Ten Thousand Waves spa just 3 miles outside of Santa Fe, or Ojo Caliente, an hours drive away.   Both had come highly recommended with adjectives “zen-like” used to describe Ten Thousand Waves, and “magical” waters of Ojo Calliente.   How does one decide between “zen” and “magic?”  I couldn’t…I went for both! 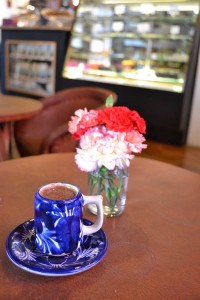 For my actual birthday, I started out with a hearty breakfast at the Four Kachinas B&B, then strolled over to the Kakawa Chocolate House, home of “traditional Pre-Columbian Mesoamerican Mayan Aztec drinking chocolate,” better known as a really expensive thimble-full of thick, hot chocolate.   I strolled through town and bought myself a pair of obligatory turquoise and silver earrings, which I have yet to wear.  Finally, I had loitered long enough, and the long anticipated date with my soaking tub had finally arrived.

Just ten minutes outside of Santa Fe, the Ten Thousand Waves spa brings about a sharp turn toward culture shock, because one would swear they had just teleported to a an onsen, or hot springs resort in the hills of Japan.

The minute you begin the ascent up the stairs to the front desk, the cedar and Japanese lanterns replace any trace of the Southwestern cow skull.   “Zen-like,” indeed! 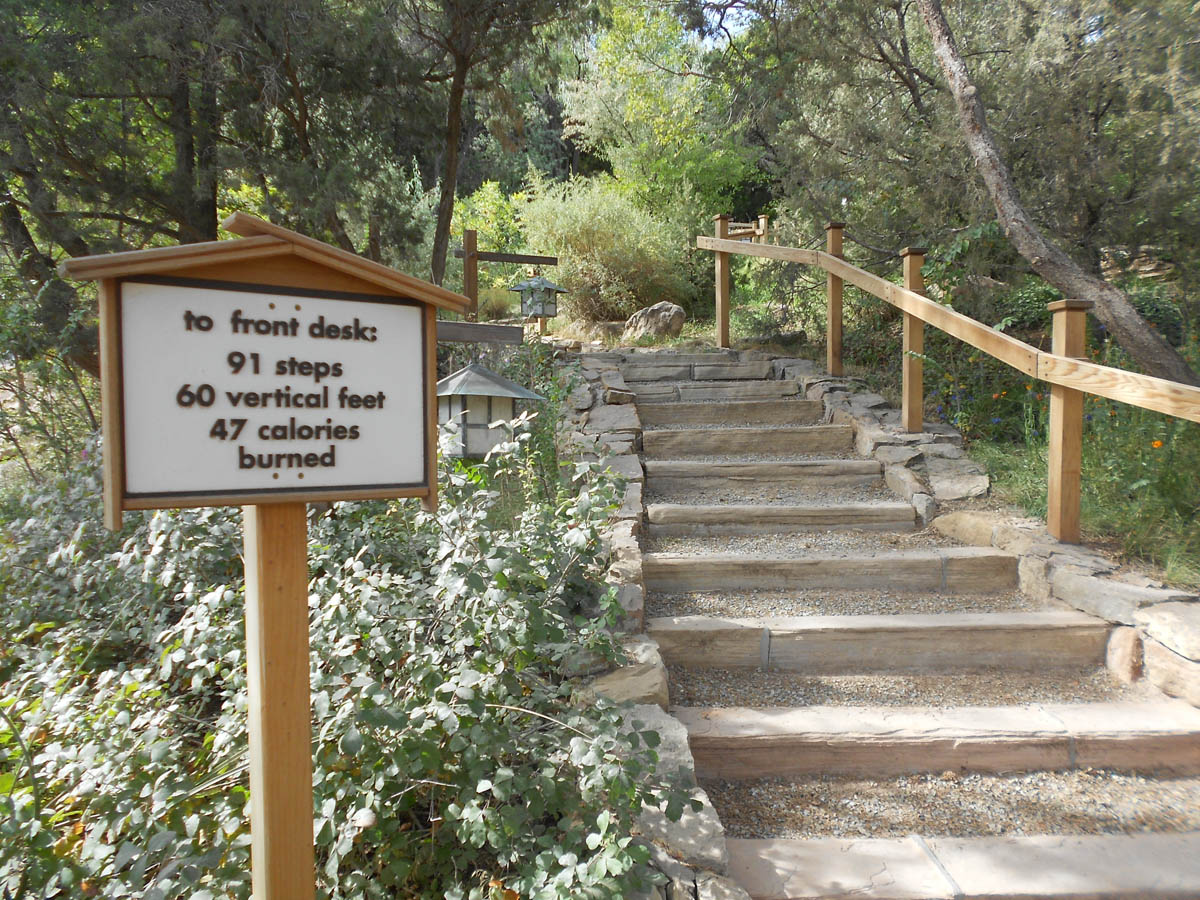 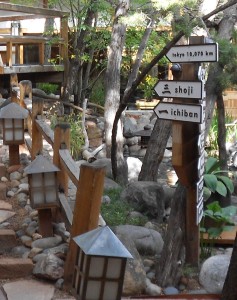 I had booked “The Natural” spa package, a three hour indulgence which began with a private, temperature-regulated bath.  The typical 106 degree tubs are often a bit too hot for me, so they dialed this one back to 100, which was just about right.  I have been to Japanese-style spas before, but this was the first time I have had the luxury of having the hot sauna, cold plunge pool, tub, and two resting areas all in one private enclosure, so not having to “robe up” each time I wanted to get in the cold plunge was a luxury!   The package also included a 50 minute massage, a salt glow rub, and the “Yasuragi” (head neck treatment) which put me into some kind of semi-conscious state that had to be close to nirvana. 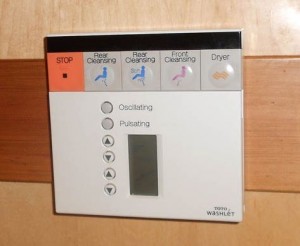 My only regret was that I did not go earlier in the day. I spent four hours here, and could have easily spent a couple more in the “Relax Room” (bamboo floors, Japanese tatami mats for resting, individual reading lights, and headphones with piped in “new age” music.)   But alas I had reservations at La Boca for my “birthday dinner,” so I had to leave…eventually!

I woke up the day after my birthday, wanting to “get out of town.” Not really an art or jewelry person, I was ready to get out of Santa Fe, so I drove along the Rio Grande Gorge over to Ojo Callente. 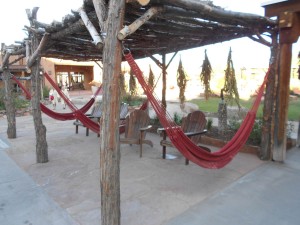 Hammocks for Hangin’ Out

It was a fun and funky place with a Native American decor, seven different natural outdoor pools of varying temperatures, and hammocks and lounge chairs for relaxing, but a bit too “communal” for me.  I did have a hot stone massage here, simply because the $35 admission to the springs was included in the price.  However, a couple of hours was enough, especially once the sun started to go down. 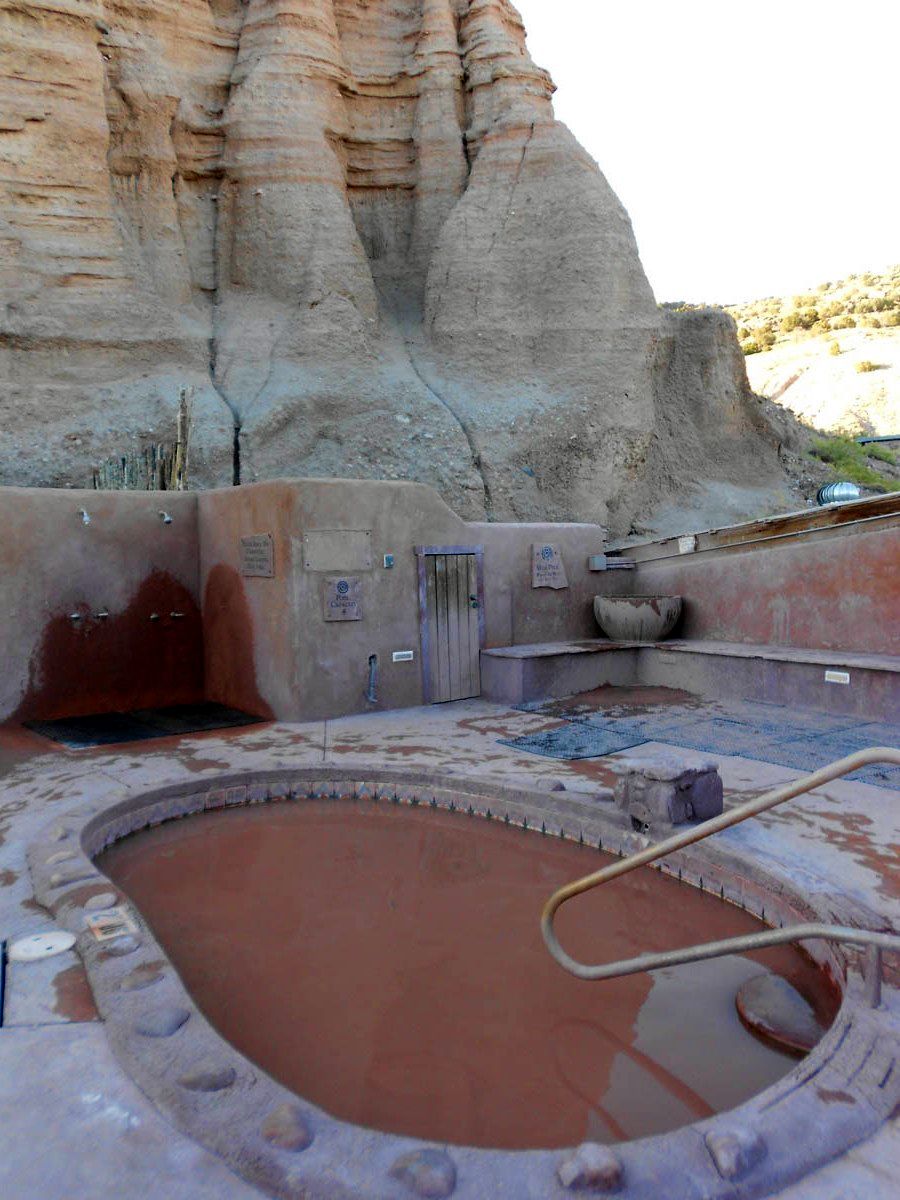 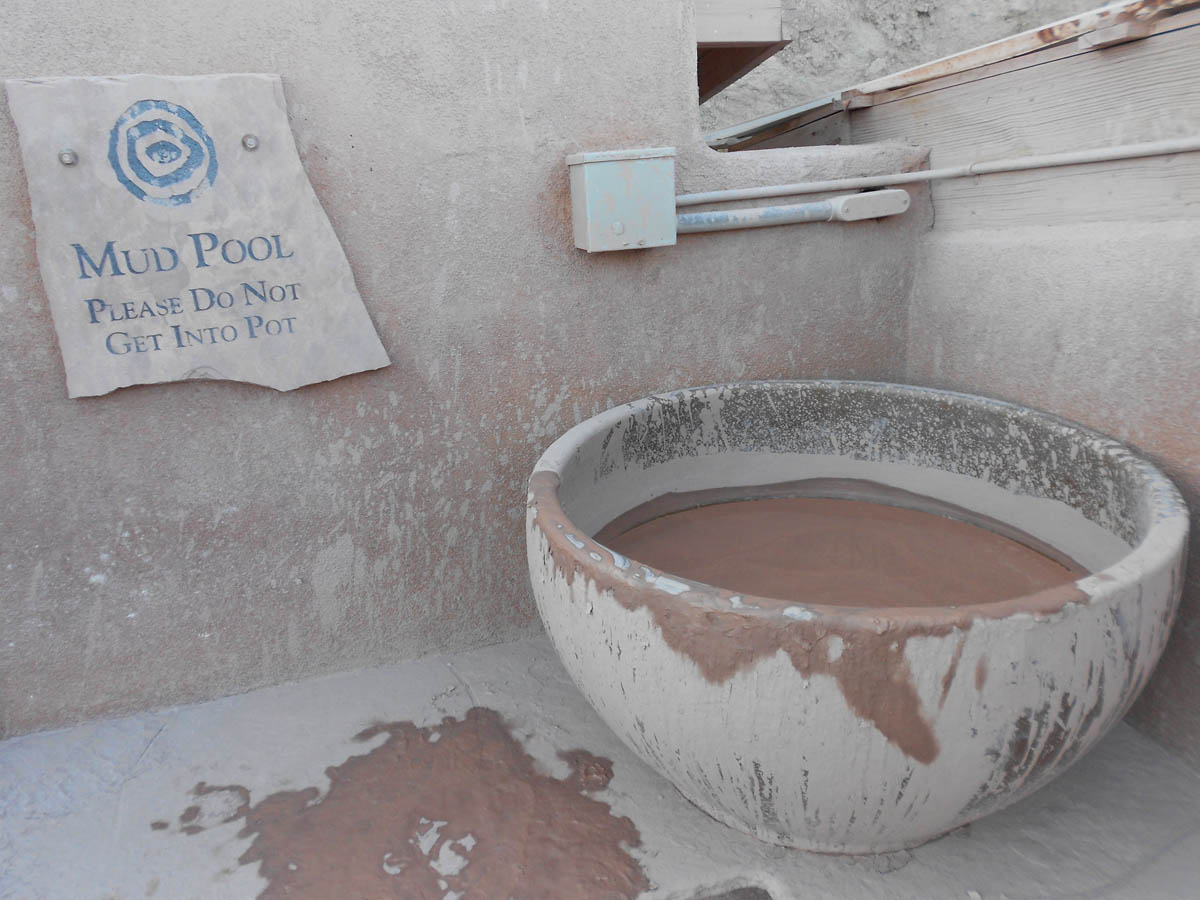 I am sorry they had to say that… 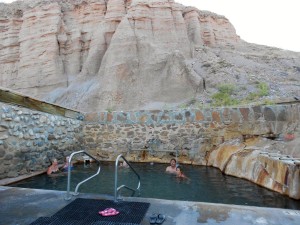 I would say the difference is, Ojo Caliente is all about the water, whereas Ten Thousand Waves is all about the service and serenity. At Ojo, you are left to your own devices to wander around, and it is a bit “self service.”  The communal atmosphere can be a bit awkward if you are solo, (especially with couples making out in the tubs!)  At Ojo, the crowds were evident, whereas Ten Thousand Waves was also crowded, but I rarely came in contact with other guests. When I did, they were quiet and seemingly invisible. Someone was always bringing me ice water, escorting me about, or immediately responsive if I asked for anything. Ojo Calliente was fun and funky, but Ten Thousand Waves was sheer bliss!

No doubt, if heaven has an ocean, there must be “Ten Thousand Waves” there! 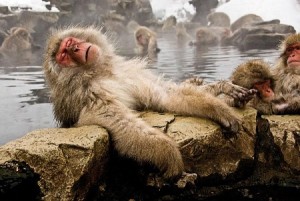