I have been trying to get a permit to hike the Wave at Coyote Buttes in Utah for a year and a half now.  The hiking is by permit only, and there are only 20 permits issued per day; ten reserved by advanced lottery, and the remaining ten for pre-dawn walk-ups.  I had some freakish accidental “beginners luck”  the first time I tried a year ago last summer.  I got my first choice on my first attempt.   I was gleefully checking flight schedules when I got the “woops!!  Not so fast!” email from Paria Canyon saying there was a computer glitch, and instead of awarding 300 lottery permits for the month, they had awarded 3,000.  They were rescinding all but 300 permits, including mine.  I was devastated!  But also more determined than ever.  One must apply four months in advance, so every month since then, I have diligently submitted my lottery application for my three choices…..and routinely received my rejection email shortly thereafter.   Until, that is, last August…I was confirmed for the Monday after Thanksgiving! 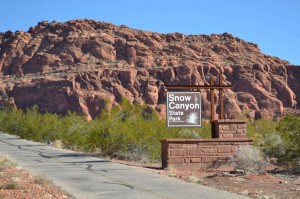 I figured I may as well make the most of the long weekend, and I could not think of a place I would rather “warm up” for the hike than the beautiful little Snow Canyon State Park in St. George, Utah.   Eighteen miles of hiking trails to choose from, and only two days to make the most of my time before moving on toward Coyote Buttes. 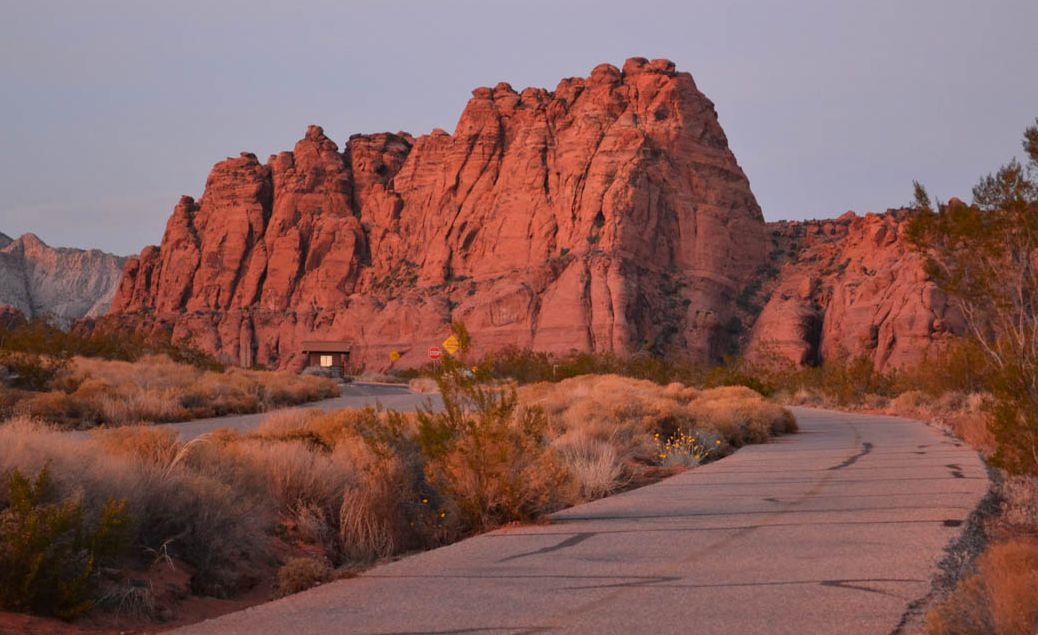 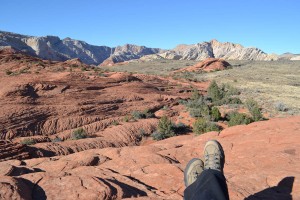 It rarely snows in Snow Canyon, actually named for Utah pioneers, Lorenzo and Erastus Snow.  In fact, it was downright toasty in the bright noonday sun on Thanksgiving Day.   Coincidentally, I hiked this same canyon Thanksgiving of 2006.   The majestic red Navajo sandstone, green sage and juniper, black lava flows against a bright blue sky left a lasting impression, and I vowed to return for more. 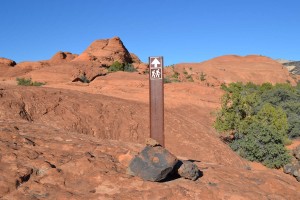 One of the many things I enjoy about hiking this canyon is scrambling up and over the gigantic petrified sand dunes.  Wind and water have worn ridges in the sandstone surface like stair steps, making the climbing easier.   Trails are marked, but as long as you are on the dunes, it is pretty much “go your own way.”

In addition to the beautiful red and white Navajo sandstone, there is also an abundance of lava still visible from cinder cone erruptions from thousands of years ago.  One path hikes through an old lava flow, with overlooks of lava tubes, and even a couple of lava caves. 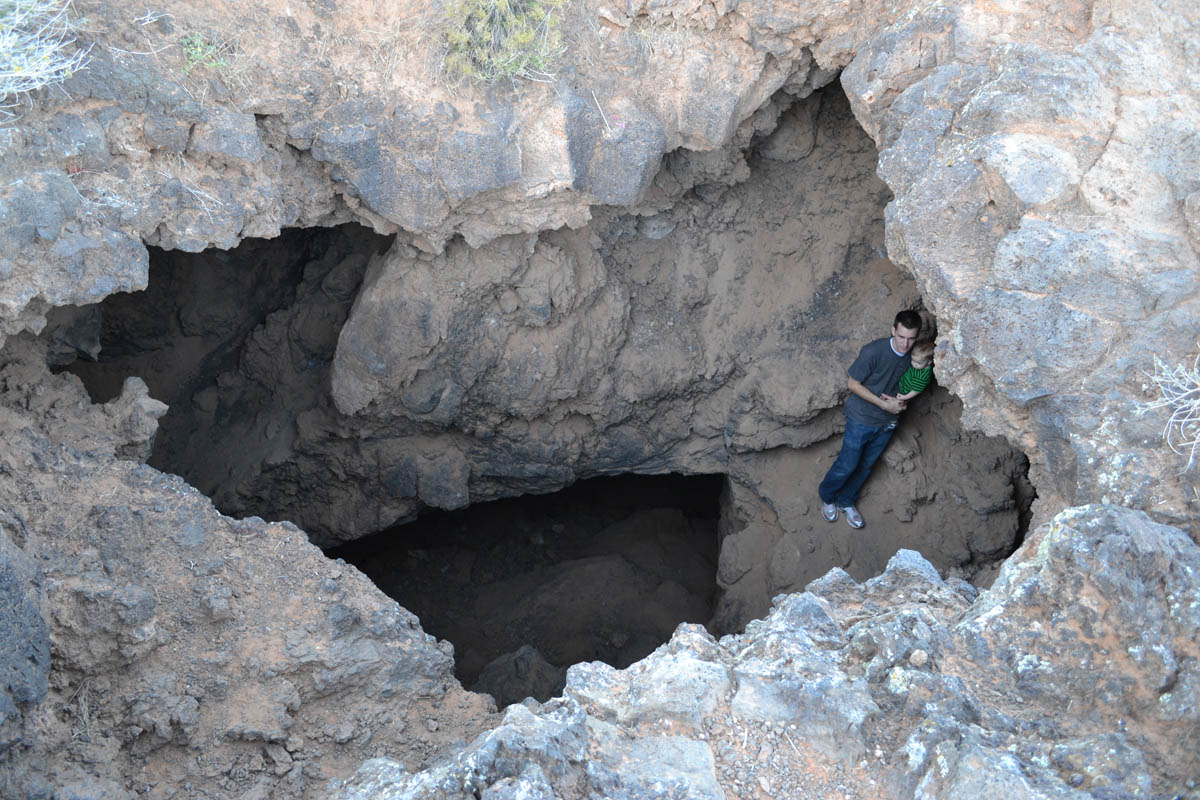 There is an entire family down there!

Another plus of hiking this canyon is its orientation between two very tall cliffs.   A two lane highway runs through the middle, dividing the canyon and making it virtually impossible to get lost. 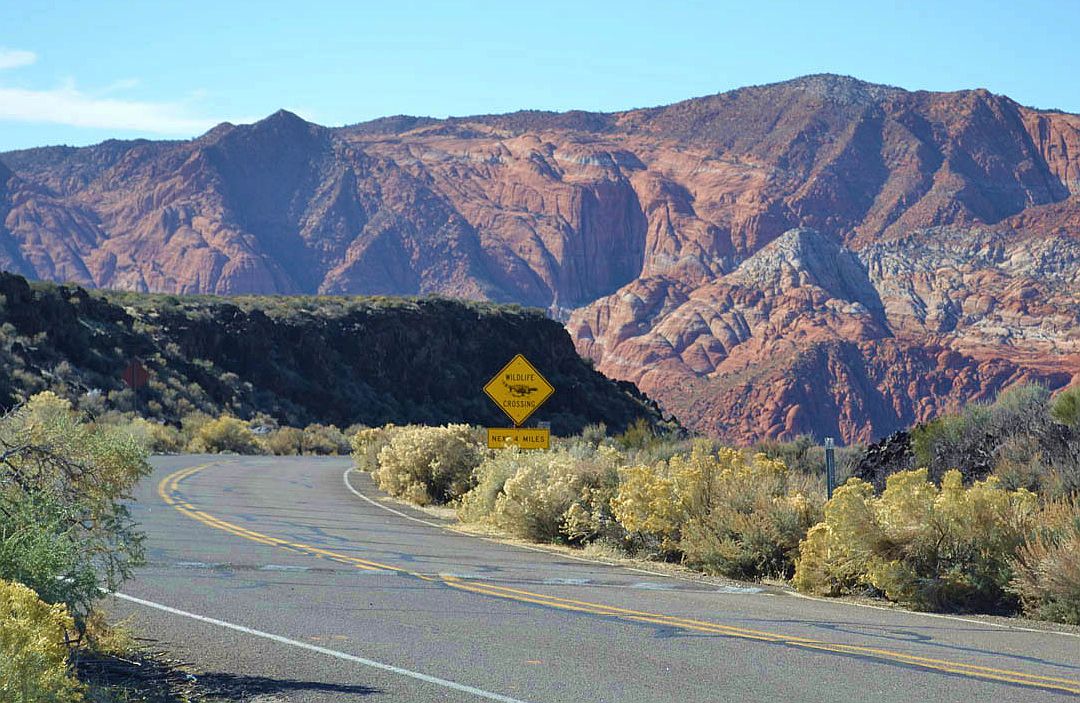 The State Park does have a campground with 33 sites, most of them gorgeous with beautiful views of the sandstone, but these are dry camping only.  There is one small section with full hookups, but the sites are so ridiculously close, you could open your slide window and pass the Grey Poupon over to the dinette next door.   I still think it would be worthy of a dry camp, as the cliffs take on an ethereal quality as the sun goes down and the cool desert night sky fills with stars. 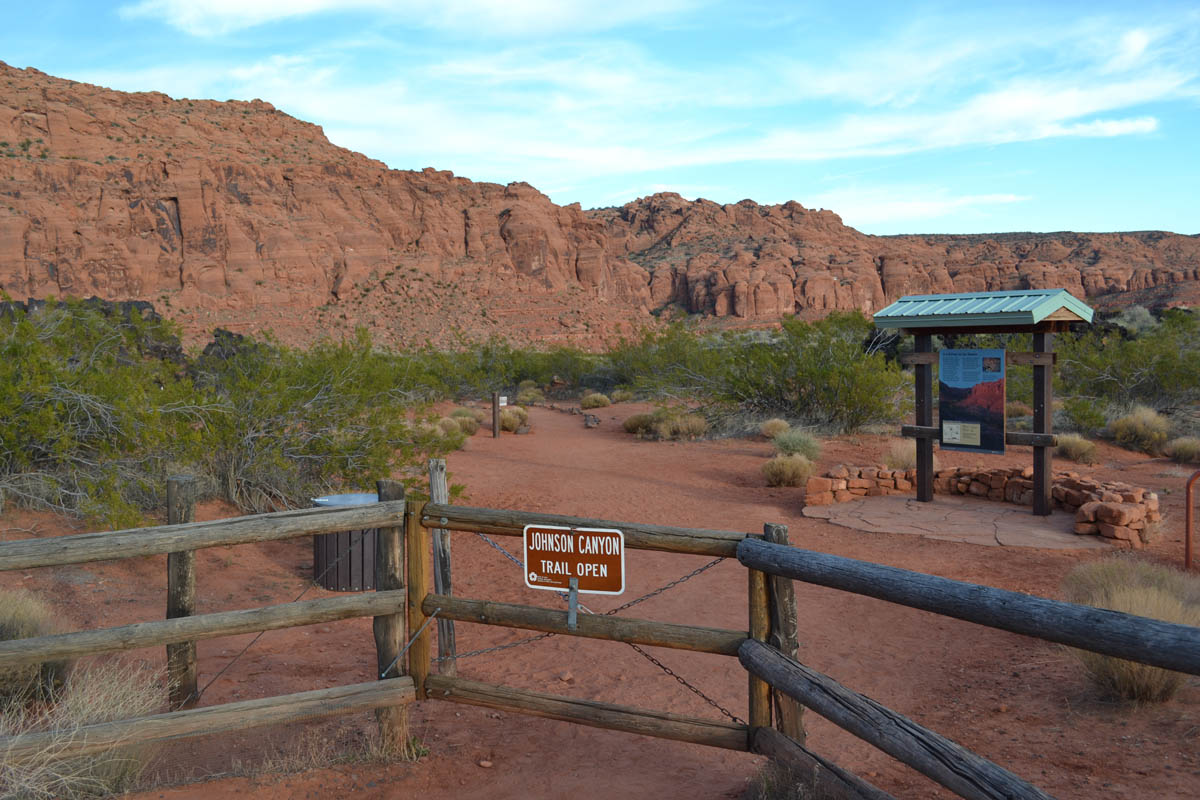 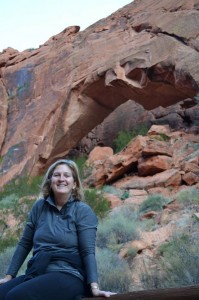 One of my favorite hikes, Johnson Canyon, is actually just outside the park boundry, and is only open during winter months to protect nesting birds.  It is a beautiful little box canyon, with a natural spring surrounded on three out of four sides by sandstone cliffs.  Johnson Arch overlooks the narrow canyon with a span of 200 feet.

Several movies have been made in Snow Canyon.  Butch and Sundance were here.  Also Jeremiah Johnson, and The Electric Cowboy.  And before Hollywood, the Anasazi Indians called it home.   As one of the rare sources of water in the desert, it is easy to see why… 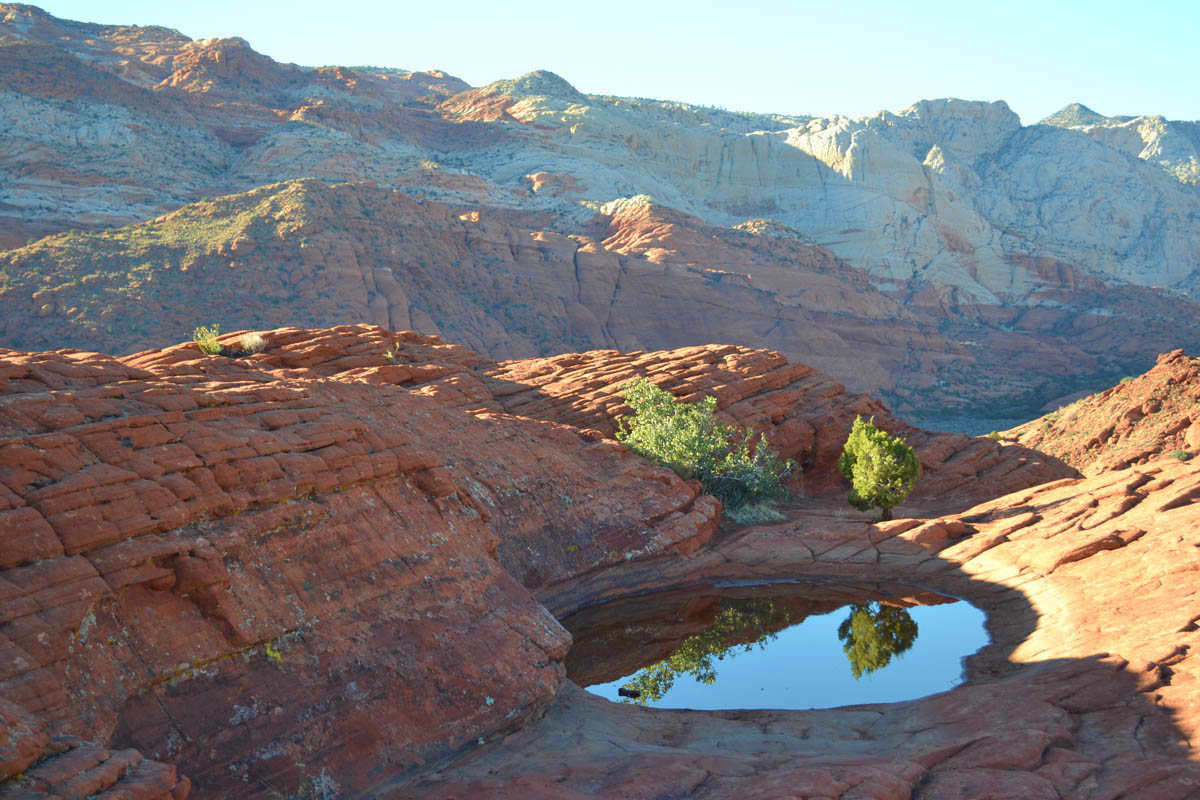 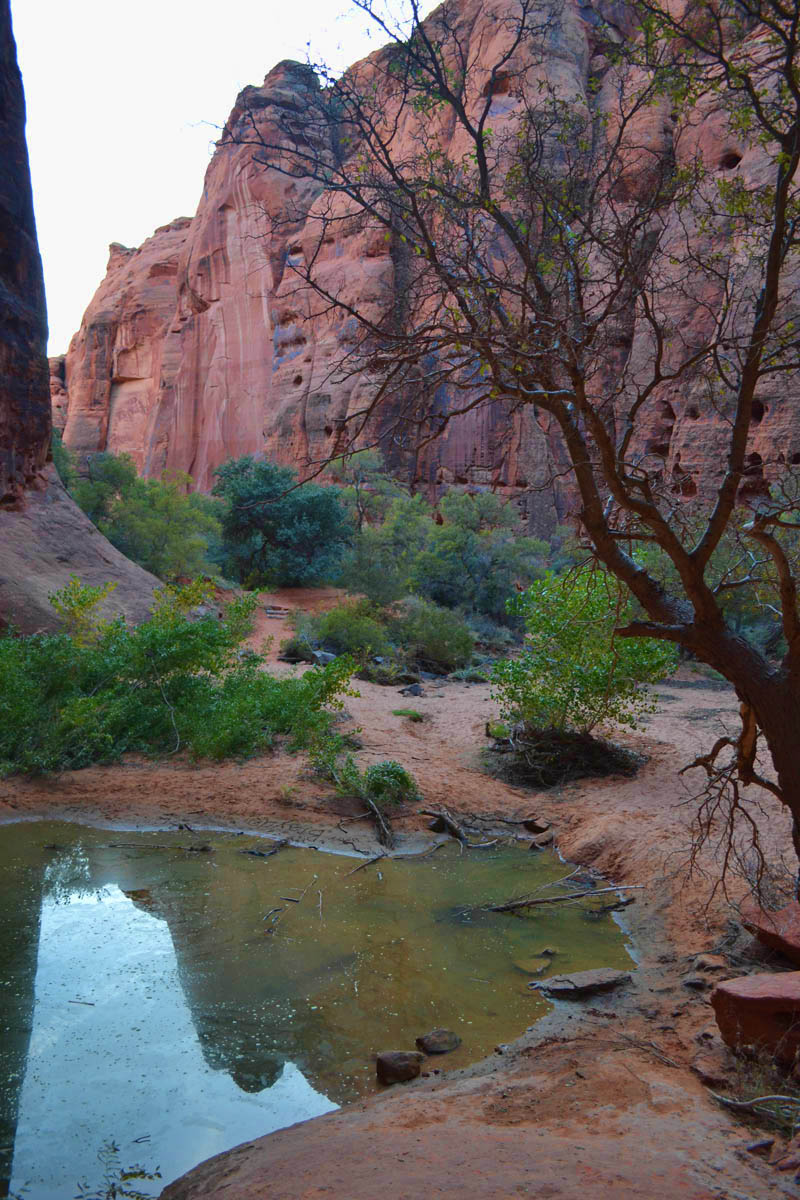 A very fitting place to give thanks on Thanksgiving!

“I am grateful for what I am and have. My Thanksgiving is perpetual…for my wealth is not possession, but enjoyment.” —Henry David Thoreau 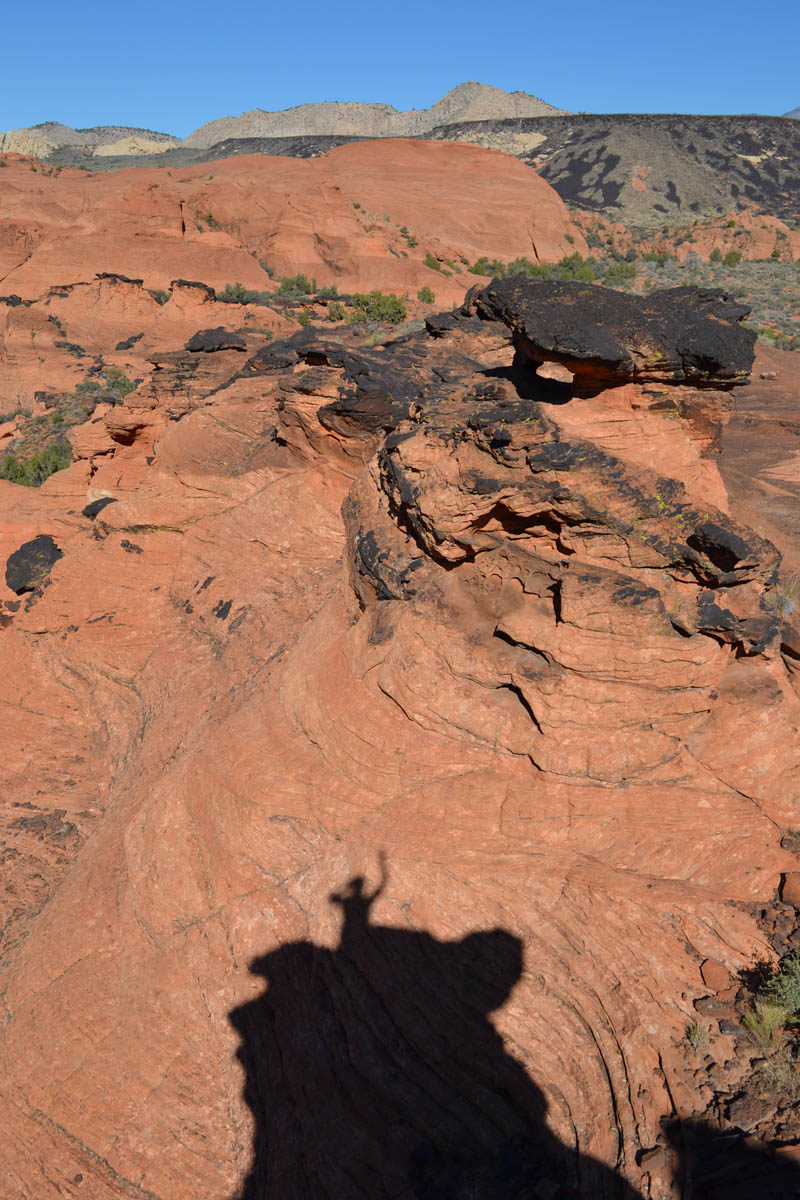