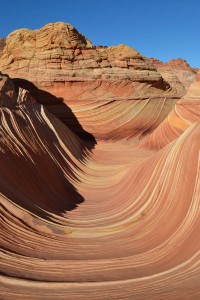 As I mentioned previously, I have been trying for well over a year to get a permit to hike The Wave in the Coyote Butte section of Utah.  Having been so excited about the prospect of crossing this off my “bucket list,” I was surprised by the feeling of trepidation that was eating away at my stomach the night before as I sat in the local Mexican restaurant swigging a margarita, trying to plot way-points in the wilderness into an automobile GPS.   See, I am terribly intimidated by navigation.  Give me a map and a compass, and my very dominate left brain can find anything.  But tell me something arbitrary like “head toward the sandstone ridge,” and I may as well turn around now.

I made check lists of everything I would need to “self rescue” (Note for future hikes:  Duct tape!  More on that later…)  With the alarm set before sunrise to allow myself plenty of time to correct any missteps, I carefully packed up and assembled all my gear — number one on the list being the prized permit. 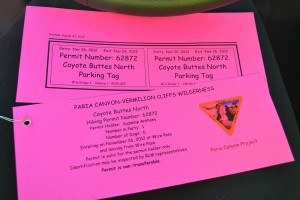 Coyote Buttes gives out 20 of these per day, 10 via advanced lottery, and 10 more on a “walk-up” basis the day before the hike.  On Friday before the weekend, they had 178 people vying for 30 permits.  Although this lottery process can be extremely frustrating, it is also an excellent way to preserve the pristine wilderness.  After I saw the hoards of tourists through Antelope Canyon, it made me extremely grateful for government regulation! 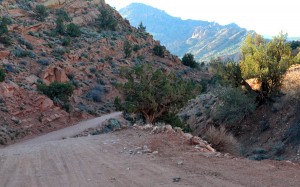 There is no sign indicating the turn off for the eight mile House Rock Valley dirt road which leads to the Wire Pass trail head.  You must watch for the turnoff between mile markers on US89.  Billed as “impassable without a 4WD after a rain,” it was like driving on a rub board in the dust bowl, but otherwise not that much worse than a farm road.  I did have to turn on my rear window washer more than once to clear off the layers of red dirt determined to cling for life to the back window. 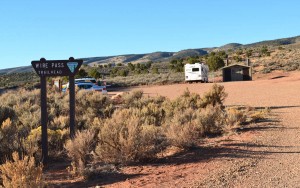 I expected to find a crowd at the Wire Pass trail head, but there were only three cars, one truck, and one Class C rental.  So much for navigational technique of “following the crowd!”  I would have never imagined that I would not see one solitary soul the entire three miles to the Wave! 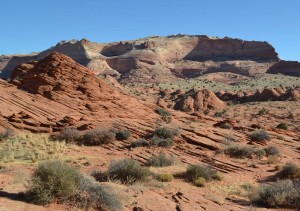 I was surprised to find the trail itself was so stunningly beautiful, with the vermilion cliffs in the distance, the old twisted cedars, and the variegated sandstone formations.  Even without the Wave as a destination, this journey would have been a worthy hike in of itself. 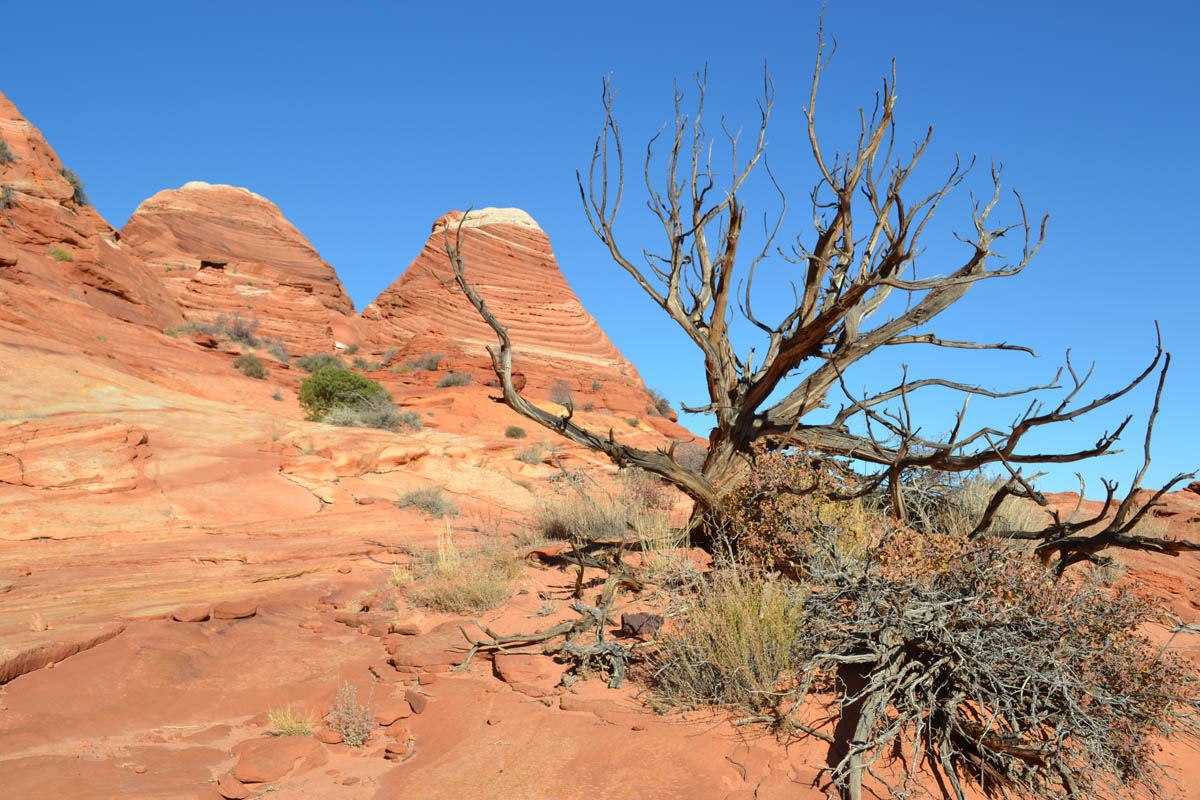 These are the primary navigational aids when hiking the 6 mile round trip trek to The Wave….sandy footprints, and “the Black Crack.” 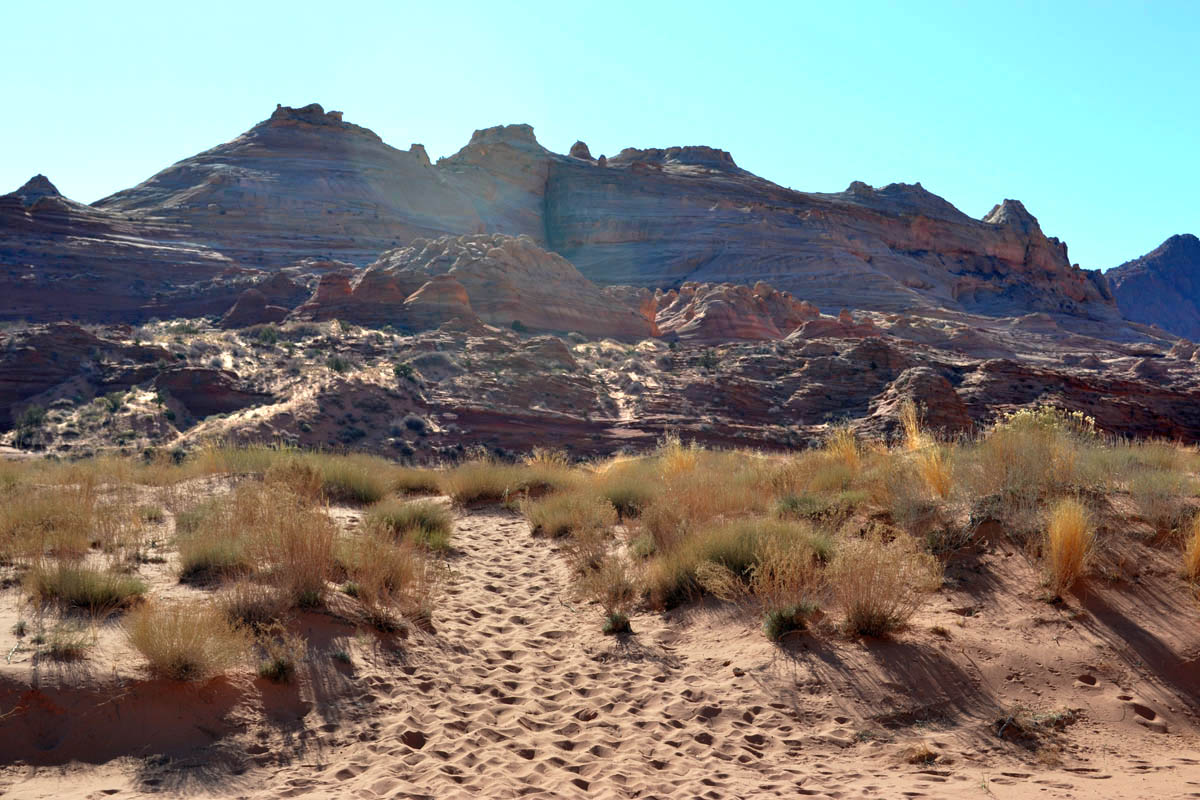 There are a couple of hiking posts and rock cairns to mark the crossing of the small saddle over the sandstone ridge, as it is easy to get lost and end up at the bottom of Buckskin Gulch if one does not cross at the right point on the ridge.  Paria Canyon BLM office issues a fairly detailed map with photos for visual sightings, along with GPS coordinates at six points along the way.  Anticipation (and my confidence) was mounting as I found each of the six points with success, a little like a treasure map!  The hardest part of the hike was the final ascent to the entry of the Wave, because it was up a fairly steep slope of very loose sand, which felt like “one step forward and two steps back!”

Once I saw the windswept sandstone ridges, I knew I was getting close… 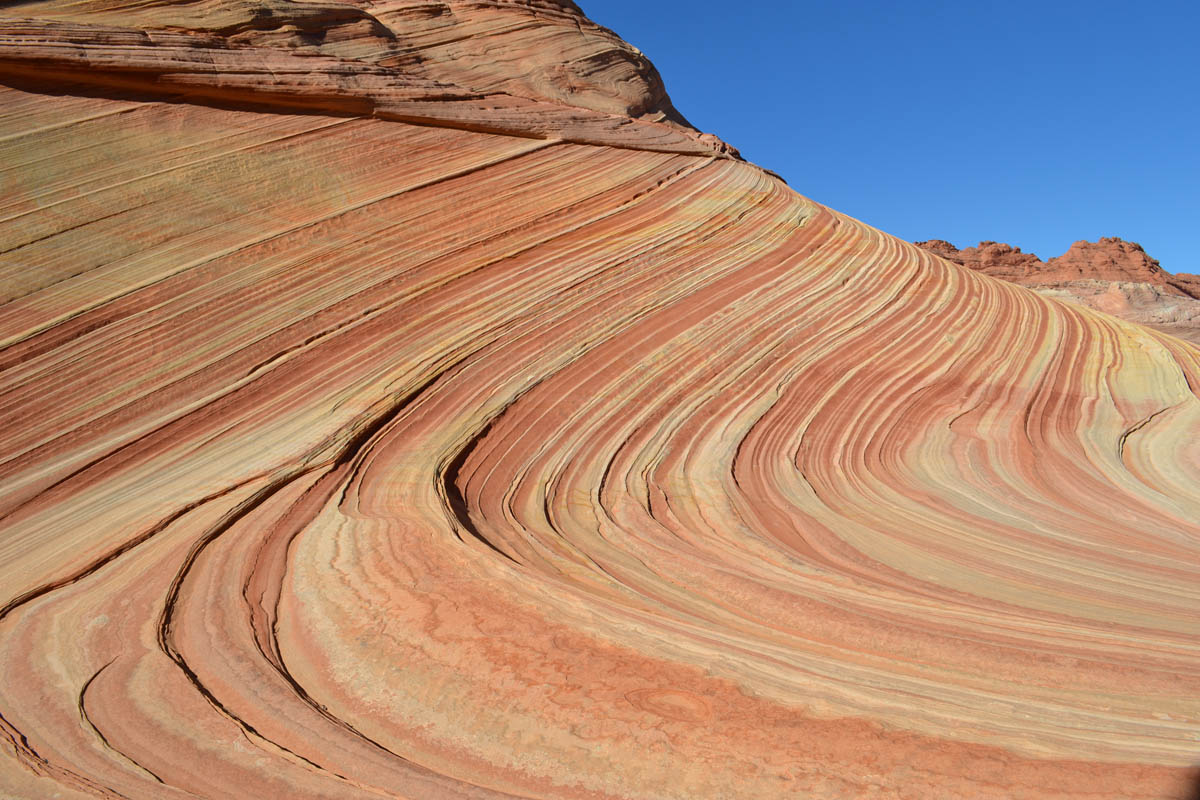 EUREKA!   It was every bit as stunning as I had anticipated!  Unlike the slot canyons that are carved by water erosion against the sandstone, the Wave has been sculpted by the wind.  So the graceful grooves and up-swept ridges really give the illusion of defying gravity. 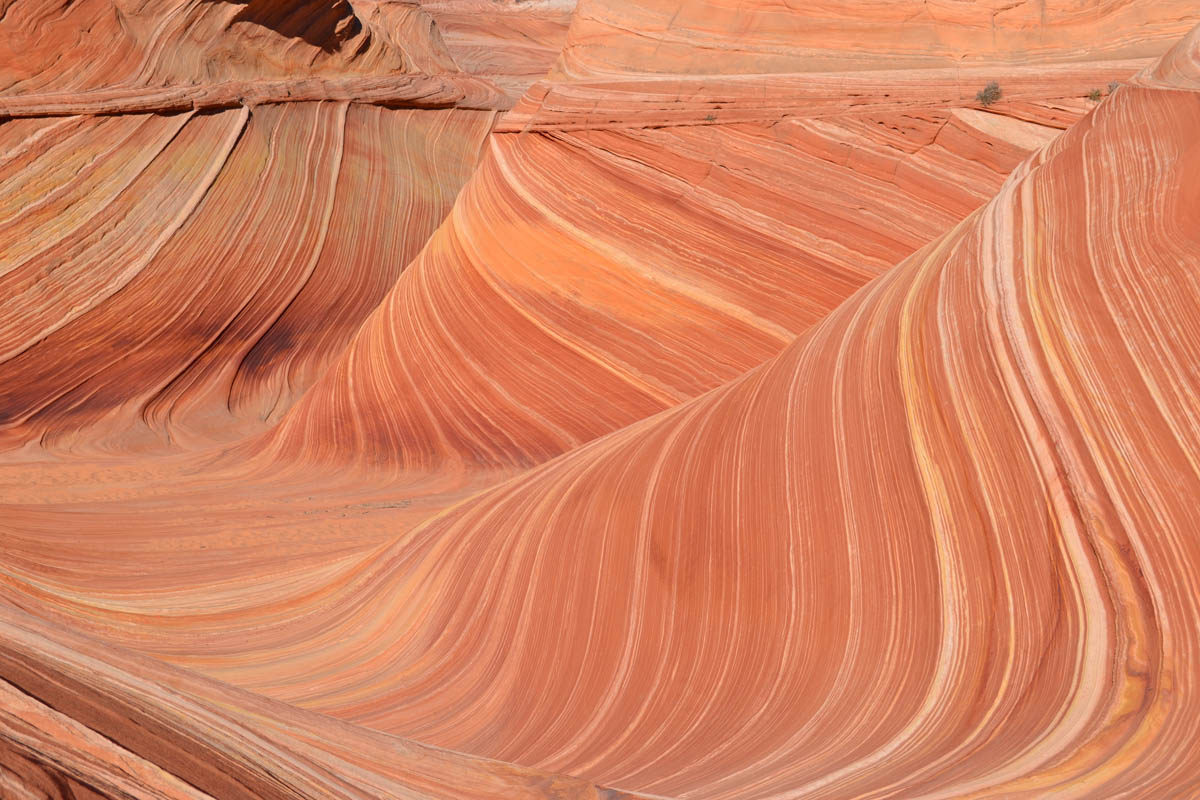 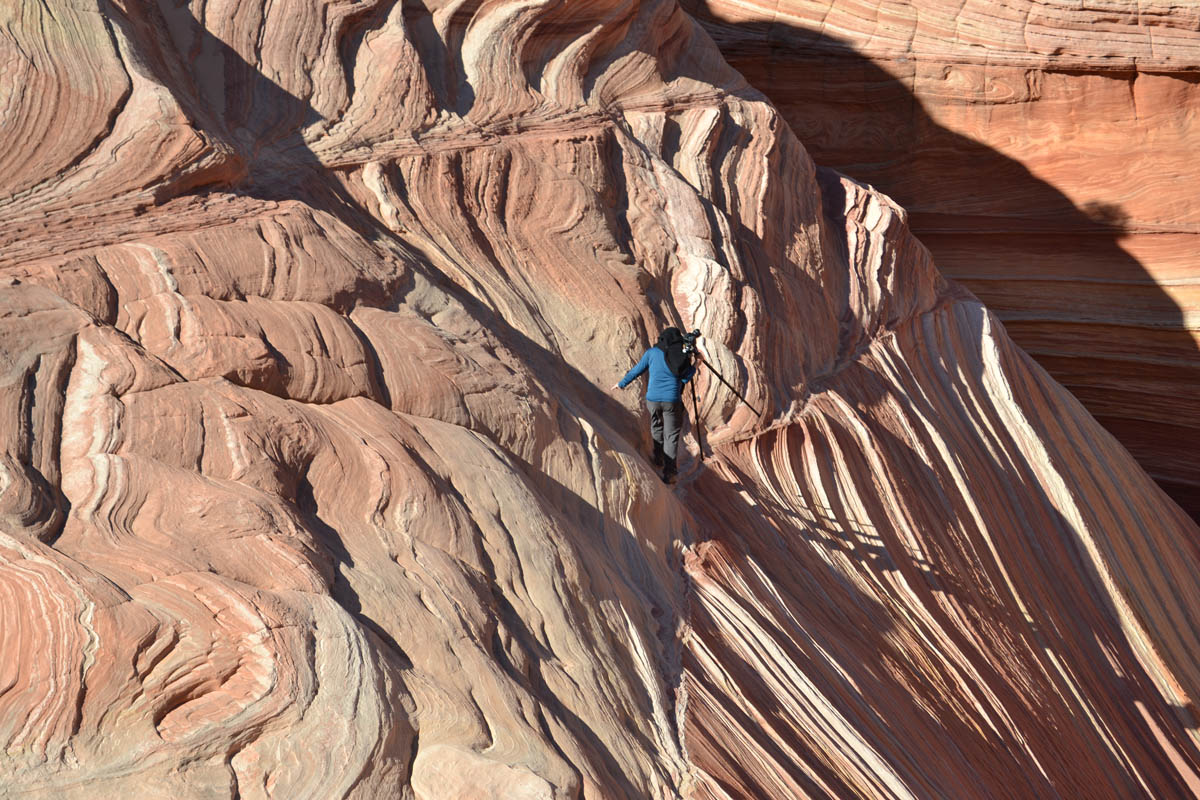 Anything for “the shot,” right?

There was only one other visitor when I arrived….a professional photographer, lying beneath his tripod, his remote in hand, clicking for just the right “money shot” as the sun moved across the canyon.   Having gotten what he came for, he packed out half an hour after I got there, but not without being coerced to “shoot me for free” first. 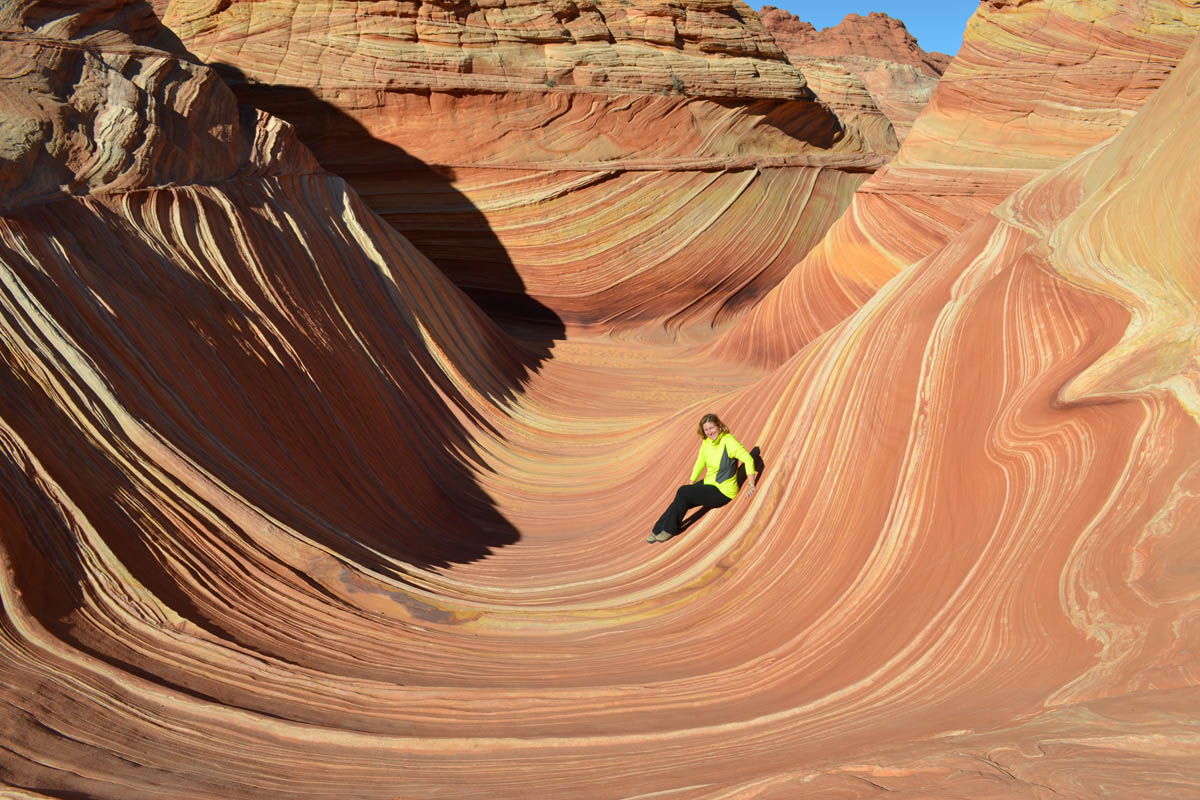 I had the canyon all to myself for half an hour.  I perched at the top for lunch, when I heard footsteps behind from a woman waiting on friends scaling the cliff behind us.  She led me over to show me the “Second Wave,” as well as the “Brain Rocks.”   Everywhere I looked there were amazing colors and formations.   It was as if Mother Nature had thrown a giant ice cream party! 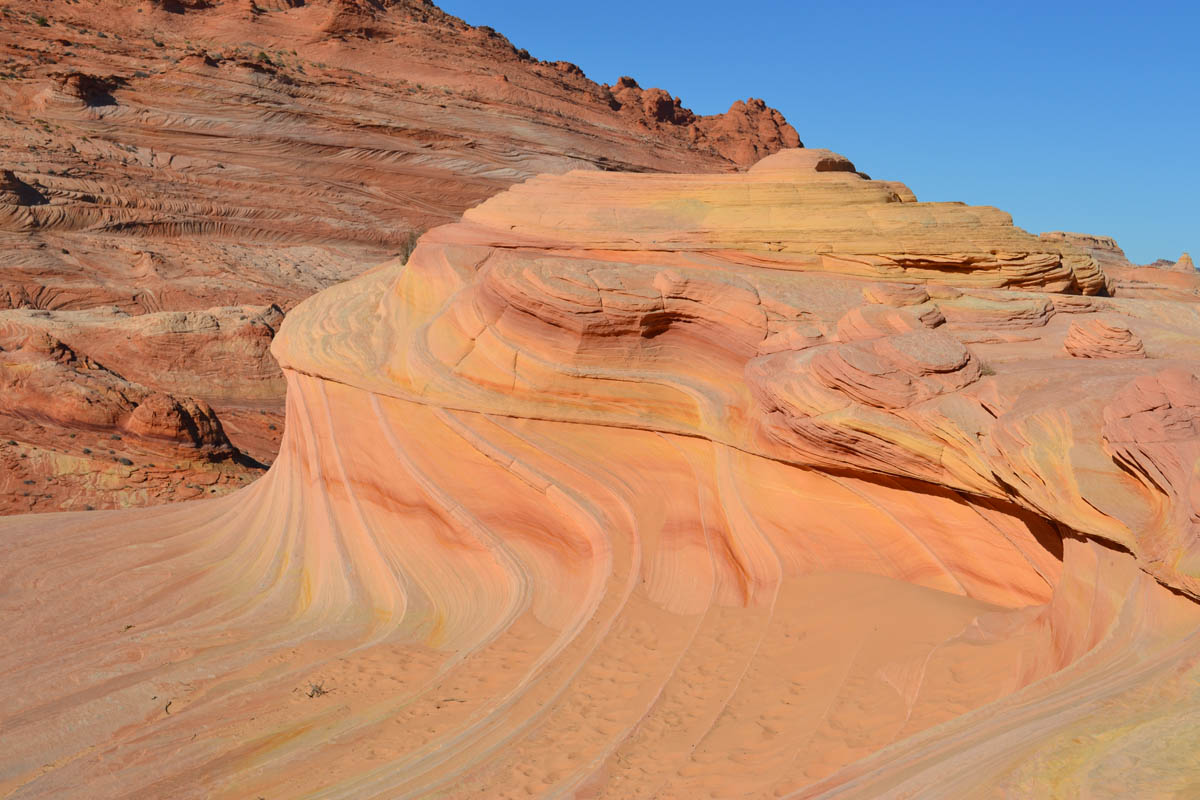 The “second Wave,” smaller, higher up to reach, but also beautiful 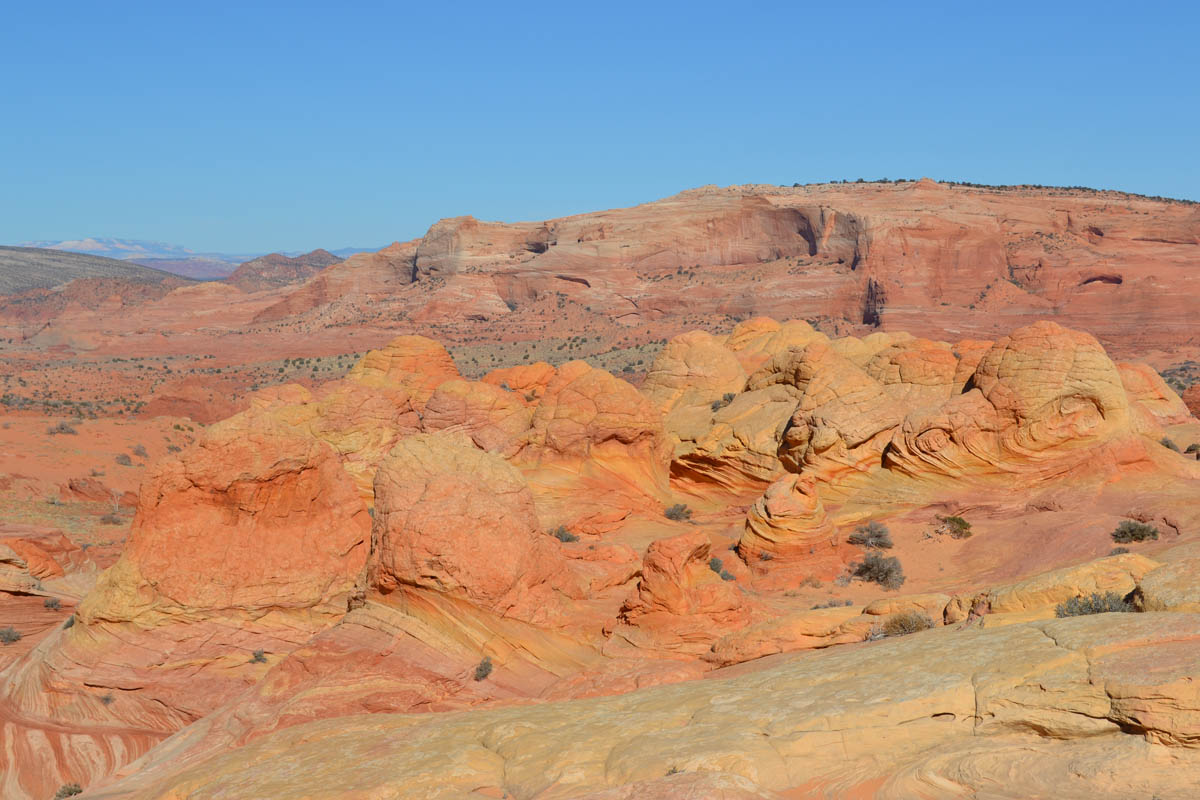 By the time I got back down to the Wave, there was a group of seven Asians having a picnic, so I decided it was time to move on, taking my time back across the canyon. 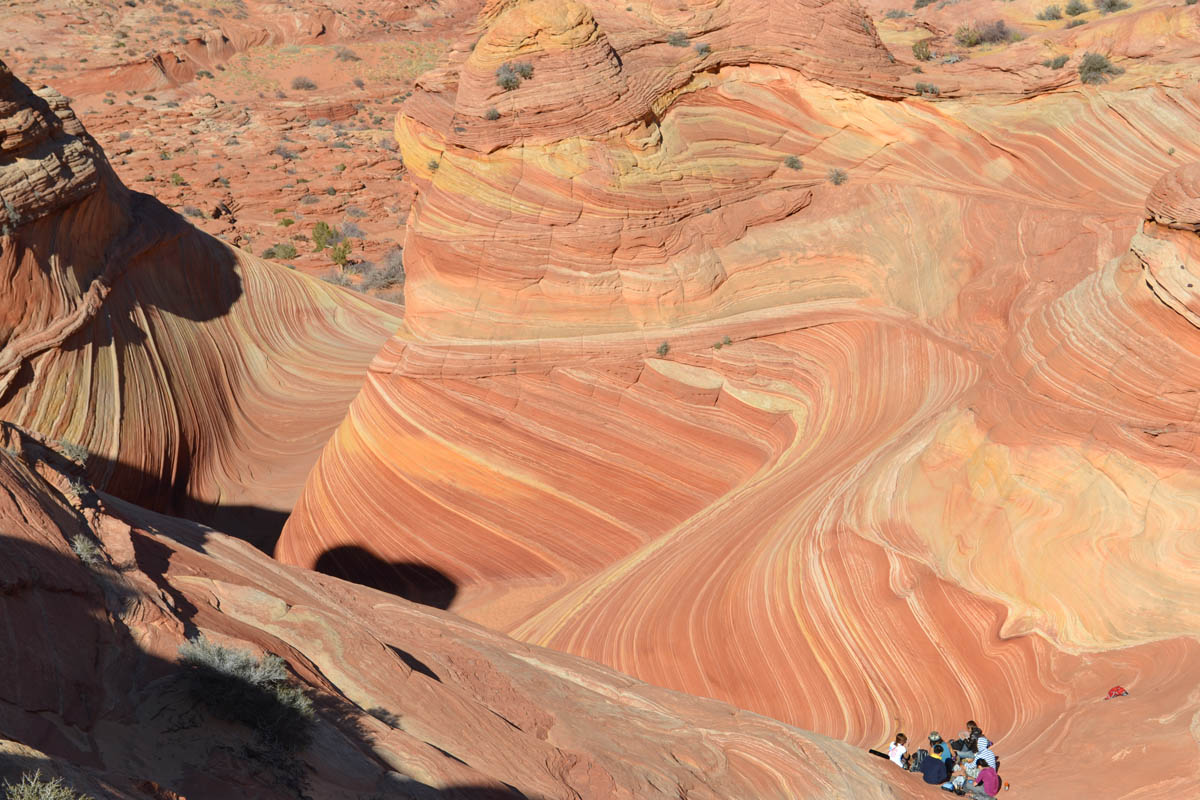 Not all if my hike was in the Merry Ole Land of Oz, though.   There was an Alice in Wonderland “down the rabbit hole” moment as well.  I hesitate to share lest my readers think I am clumsy, having only healed one and a half broken toes and marred my camera screen while careening down a steep bit of slick rock in Red Cliffs canyon.   But since there are only five of you reading anyway, I will tell you “the rest of the story,” because it’s so tragic it’s funny.

I was two thirds of the way back to the car, heading back up and over the small saddle, feeling a bit weary and complacent that I was almost “home” when I failed to lift my knee high enough, catching my boot toe on a boulder, sending me in a full body splatter across the sandstone, shattering my reading glasses, ripping my map, and jamming my index finger which was twisted around my glasses frame.  I quickly glanced around to be sure no one was looking, then hurriedly rolled over to get up.   Rolled over.  Into a cactus patch.  Not a cactus plant.  An entire patch.  I now had cactus needles from my shoulder to my knee ranging from the size of porcupine quills, all the way down to tufts half the size of eyelashes….thousands of them embedded in my nylon shirt, pants, and underwear.  I had another hour of hiking in front of me, but there was no way I could stand wearing a “needle shirt” down the mountain.  I solved the pants problem by stuffing a trusty bandanna under the waistband, but I saw no alternative but to finish the hike in my black sports bra.

I was standing there trying to get the needles out of my backside, when up came Lee…. 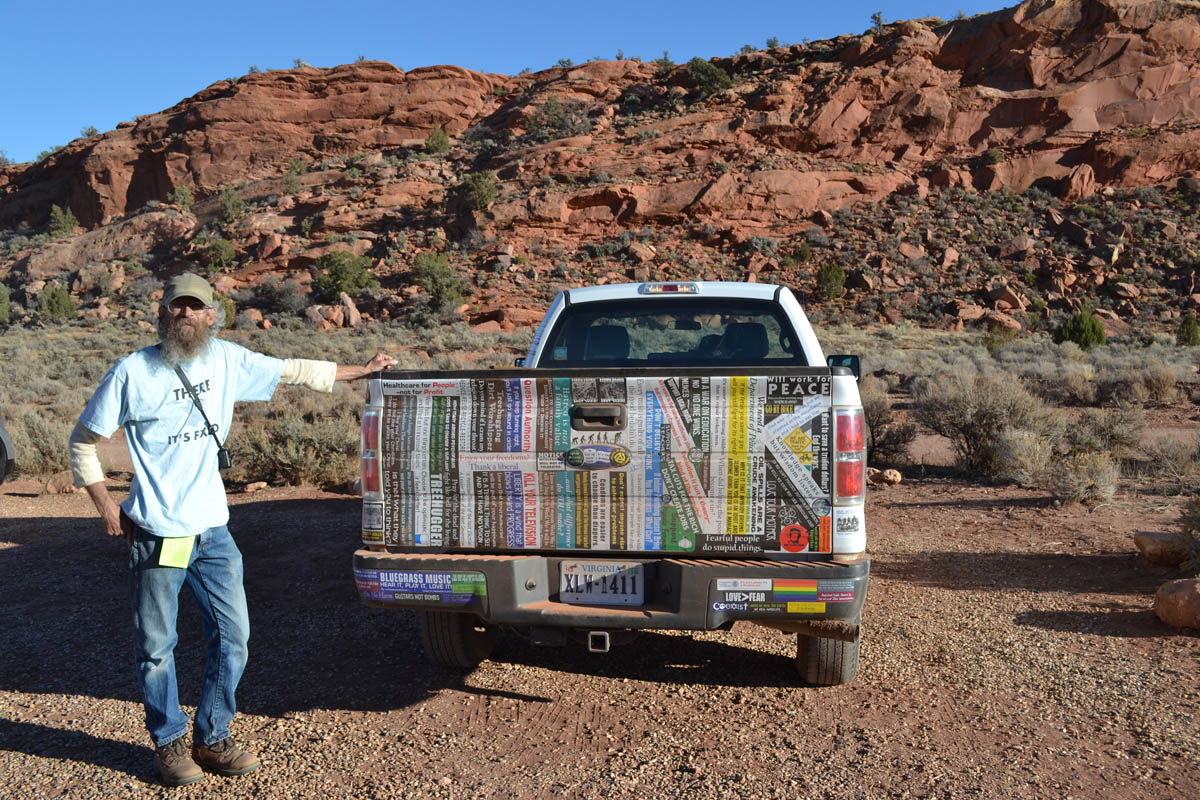 Lee offered me his red plaid flannel shirt, and we finished the hike together.   I had seen his fascinating truck in the parking lot that morning when I arrived in the Wire Pass parking lot.  (Note the stickers spell out “Think.”)  Somehow, the moment I saw Lee, I knew he was the owner of this brilliant creation.   Once back at the car, I gave Lee five bucks to launder the shirt he had loaned me.  I should have given him fifty.

I continued on down the road ….Somewhere Over the Rainbow….to Kanab….to buy duct tape to “de-quill myself… 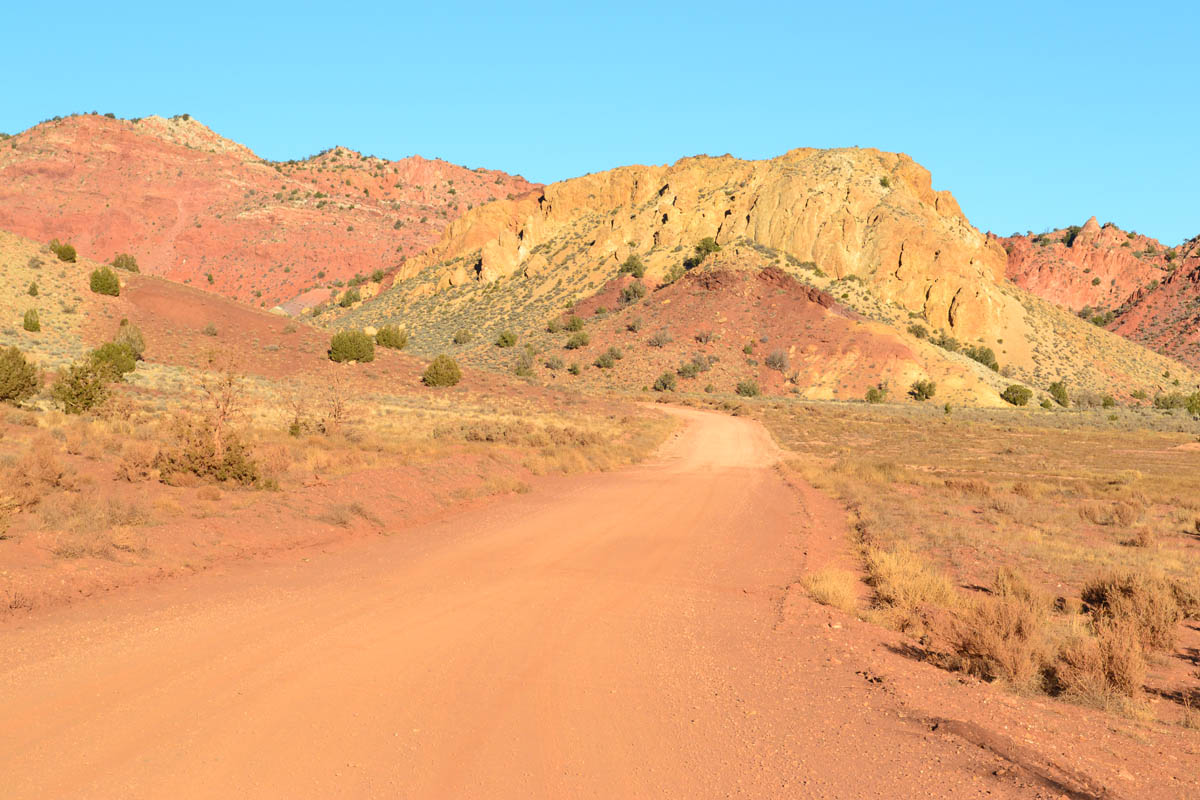 8 thoughts on “High Five on The Wave!”