My good friend and former colleague Lee and her husband Bob were heading for the Mount Pisgah Campground along the Blue Ridge Parkway, so since I was only about 90 miles away, I decided to meet up with them on my way to Asheville for the “Skinnie Winnie” rally (Winnebagos built on the narrower Sprinter chassis, for my non-RVing readers.) 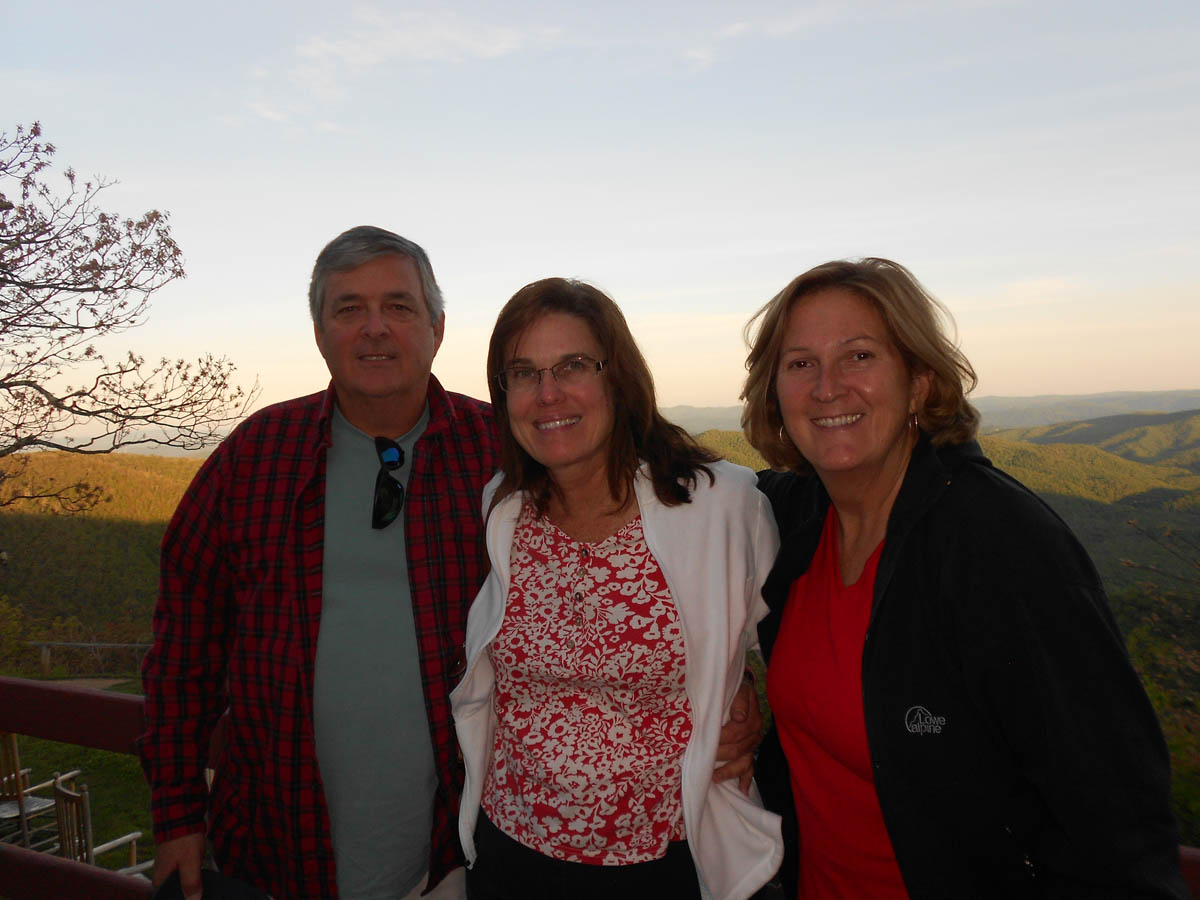 Sunset over the Blue Ridge Mountains after lovely dinner at Mt. Pisgah Inn

So I got an early start out of my picturesque riverside parking place along the lazy Little Pigeon Forge River and skirted the Smoky Mountain National Park up and over the mountains as the sun was cresting over the ridge, erasing the rosy glow from the gleaming white bank of clouds just after they left a shimmering veil of raindrops on the giant pine trees. It was such a gorgeous morning that it almost brought tears to my eyes as I crested one hill after another, then dropping down to cross the wide expanse of the French Broad River.

The temperatures were due to drop over the weekend, coupled with the 5,000 ft increase in elevation, so I figured I had best top off the propane. So after a brief stop at the “Tractor Supply” (where the propane tank is staffed by a young female chemistry major!) I then turned toward the climb up the entrance ramp to the Blue Ridge Parkway to drive the 20 miles to Mount Pisgah. 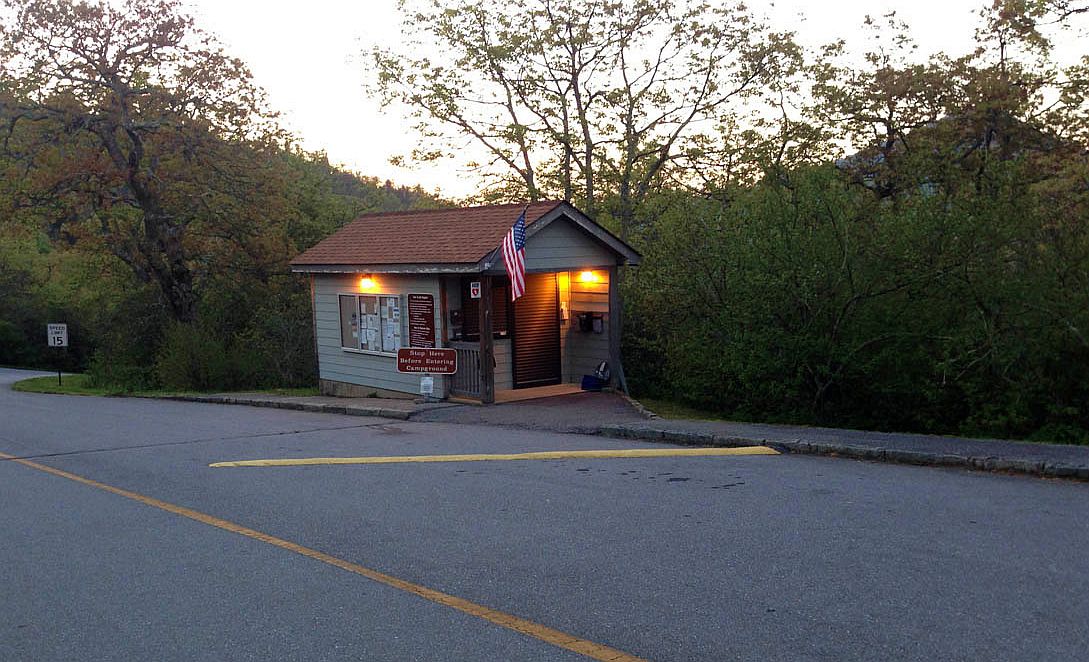 The only ranger station in the park, with shredded picnic basket on the porch stating, “Yes, we have bears!”

It has always been a dream of mine to drive the Parkway in its entirety of 469 miles, connecting the Great Smoky Mountains National Park in North Carolina to the Shenandoah National Park in Virginia. Although I have driven many different sections of the road independently, I have never been end to end. And this would be my first time to drive the RV on the Parkway, along a familiar stretch that had been a “cake walk” in my Honda CRV twice before. I figured this would be a good test of my comfort level to see if I had steady enough nerves to drive the entire parkway, possibly later this summer. 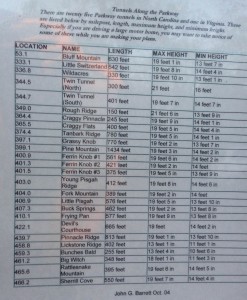 It took just 15 miles and 30 minutes of white knuckle towing up 9% grades, hairpin curves, five narrow tunnels with no light at the end, along two lane roads with no passing lane to realize this goal was a bad idea.  I had a parade of sports cars and Harleys so far up my ass that they could have reached out and checked the air pressure of the tires on my bicycle rack.  I was never so happy to see the brown “Mount Pisgah Campground” turn off sign come into view! I am sure that made about 14 of us….me and the parade behind me!

Although Lee and Bob were only staying for one night, I decided to take a little vacation time while I was up there so I reserved five nights at the campground. In retrospect it may have been a bit optimistic for my first “dry camping” experience, where it was twenty miles back down the mountain to civilization. 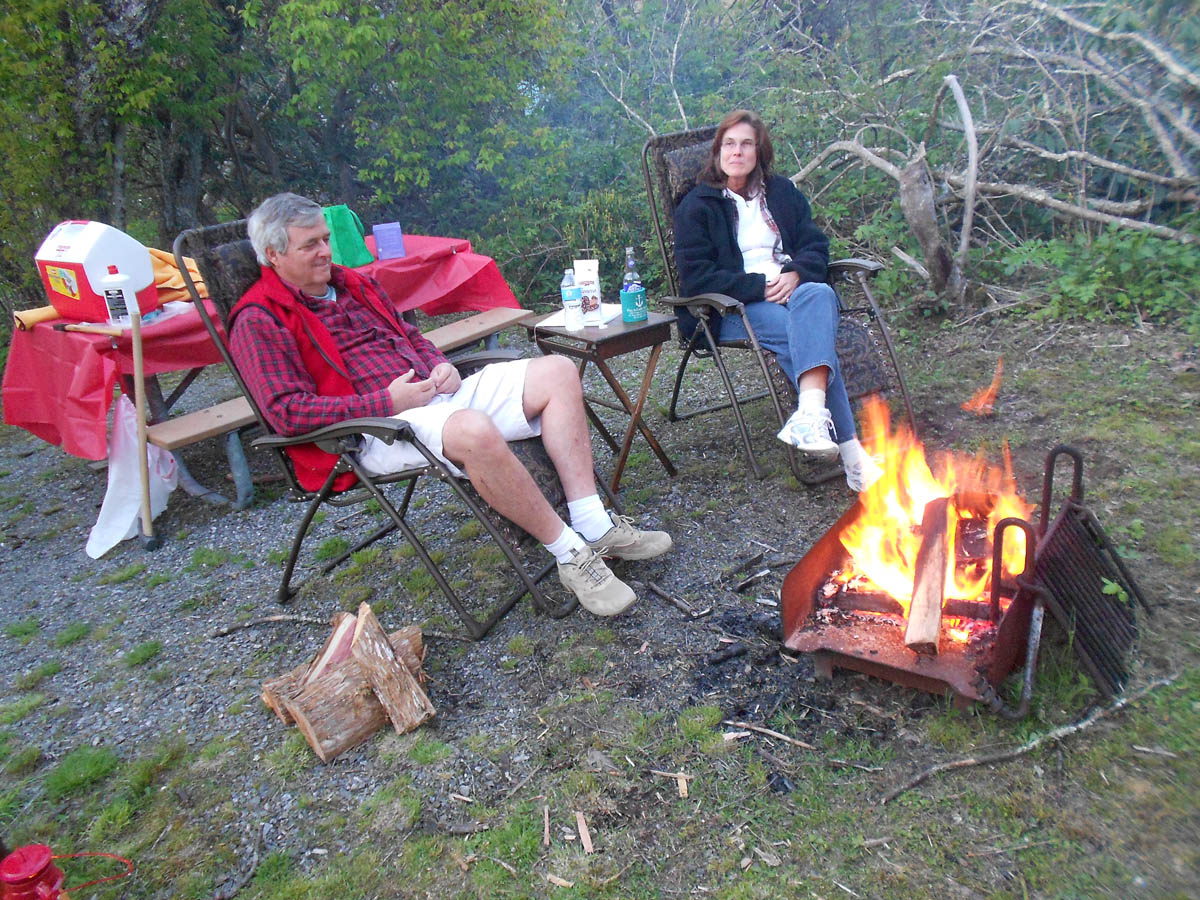 Bob showing off his fancy, fragrant red cedar firewood. “Do you guys HAVE to leave??”

There was not a level foot in that entire campground. Even the dump station was built on a hill that seemed surely as high as the 5,700 foot Mount Pisgah itself. If there is one thing I HATE to do, it is break down and ask for help, but after repeated attempts to nail the narrow driveway in my assigned camping spot, alternating scraping sounds between my running boards and wheel covers, I finally broke down and asked the young man in the giant fifth wheel next to me to come help guide me in. I literally had 6 inches on either side between the slide and the steps, all the while with him illegally hacking branches off the overgrown rhododendron bushes as I inched further and further in. My “final resting place” was seriously unlevel, but as long as the fridge was working, I did not care. So what if the limes all rolled off the countertop like “Casa Magnetica!” I was NOT moving an inch for entire five days! 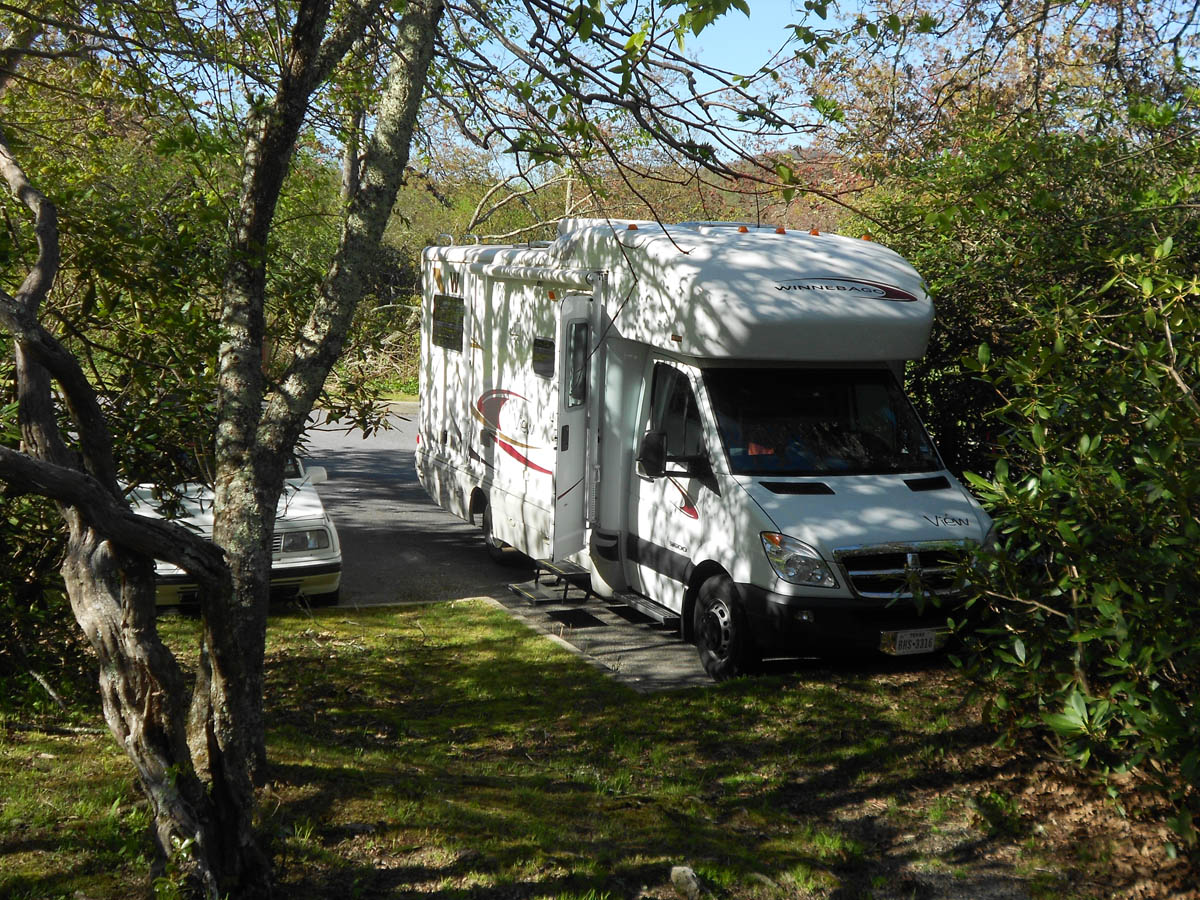 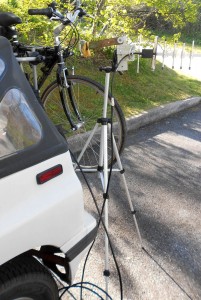 At least I was able to get a signal, but not without the help of the “space probe” yagi antenna that my brother, Don, built for me. He tried to convince me of the need for a waterproof box to hold my MiFi JetPack, but instead I opted to run the low loss coax cable through the rear hatch door. However, I had not accounted for having to leave the door open for the cable in 35 degree lows!

So my time on the computer was limited — limited to emailing the View Yahoo group to ask “Why aren’t my batteries charging???” Don had given me a volt meter and told me “Just don’t let it drop below 12.0!” Well, I started out running the generator for half an hour, and nothing changed. Then an hour. Then 90 minutes. Still, the volts were continuing their steady downhill march. 12.3…12.2…11.9…11.7….”Sh@#$%!!!” I went from foolish extravagances like running the stove top lights and vent-a-hood, to cooking by candlelight and waking up to check the volt meter during the night when my gas furnace was running.

It was beautiful up there. Great to get to spend some time with friends, and nice to enjoy the mountains. But being my first dry camping experience, five days in such a remote location may have been a bit unnervingly ambitious. In hindsight, I realize I spent way too much time watching that volt meter fall with the flip of each light switch, planning my day around running the generator, then fretting over the falling numbers on the volt meter’s digital display. It was a bad case of “perceptual narrowing,” with me staring at that volt meter like Dorothy watching the sands in the hour glass in the Wizard of Oz. Only instead of lions, tigers, and bears in the haunted forest of Mount Pisgah, it was “Amps, Watts, and Volts! OH MY!!!” 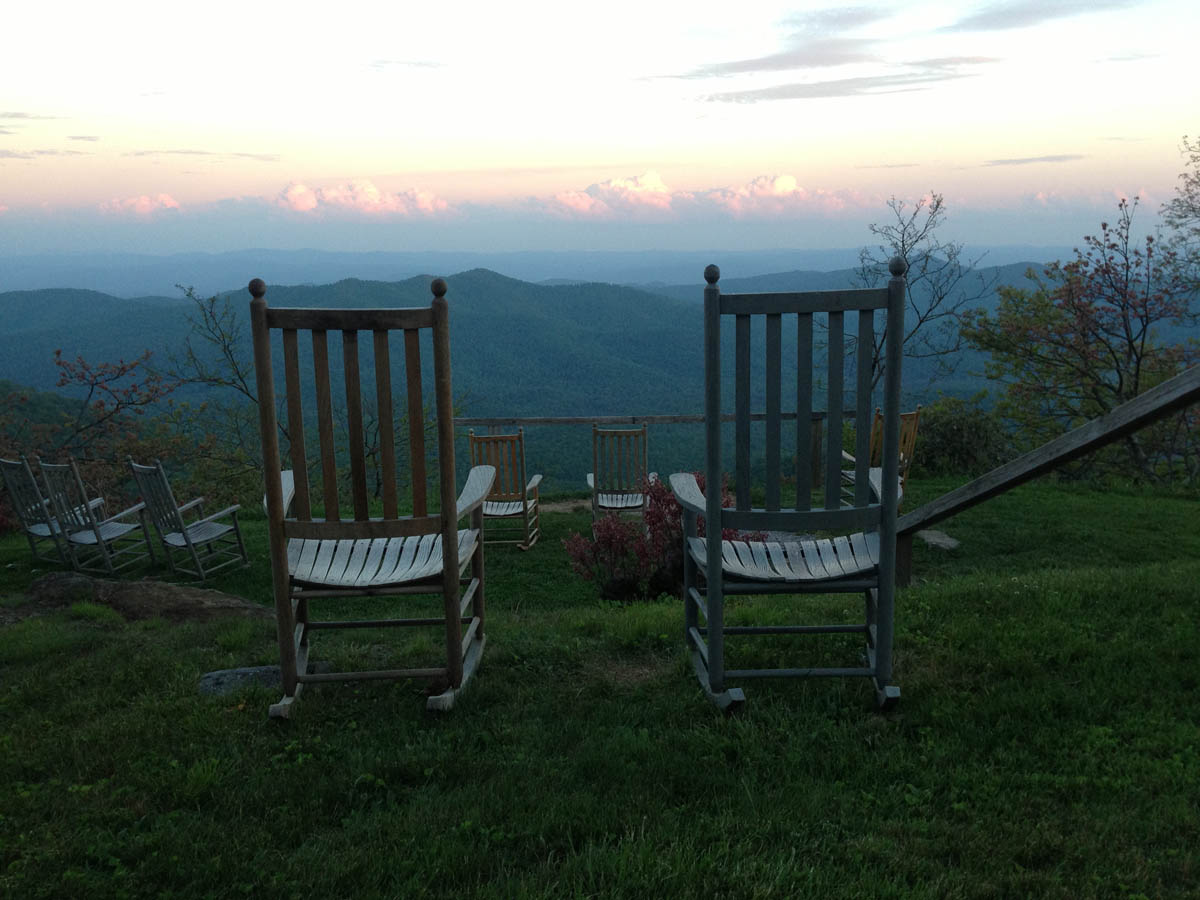