Here are a few of the hikes I have explored so far in and around Western North Carolina: 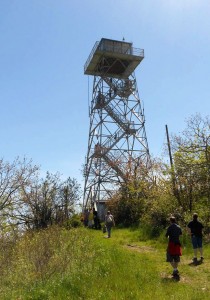 This is a popular hike from the Mt. Pisgah campground to the Fire Tower atop Frying Pan Mountain, offering 360 degree views of the mountain range including Mt. Pisgah itself, as well as Looking Glass Rock, the iconic granite dome visible from many points along the Parkway.

This hike was a real tease, as I made the steady climb up, up, up from the Mt. Pisgah Campground to reach the top of the mountain, only to realize the fire tower was now in view, but it was atop a different mountain in the distance.  The trail began a rapid descent down the other side to the parking lot for the Frying Pan trail head.  Turns out if you originate from the campground instead of the “official” trail head, you must climb TWO hills to reach the fire tower, not one! 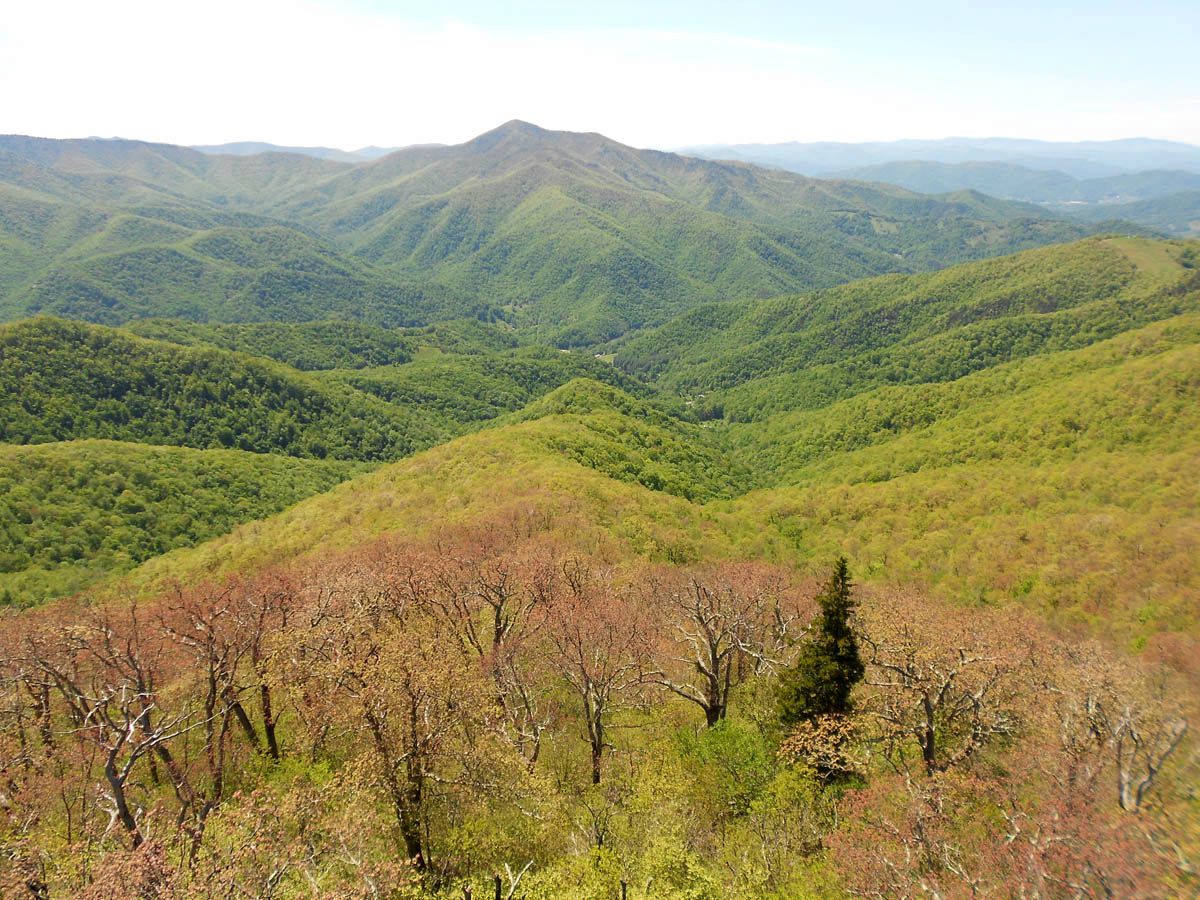 The observation platform itself on the 70 ft tower built in 1941 is closed, but you can still climb the five flights of stairs for a spectacular, albeit very windy view.    So very cool to stand up there and watch the birds soar below you. 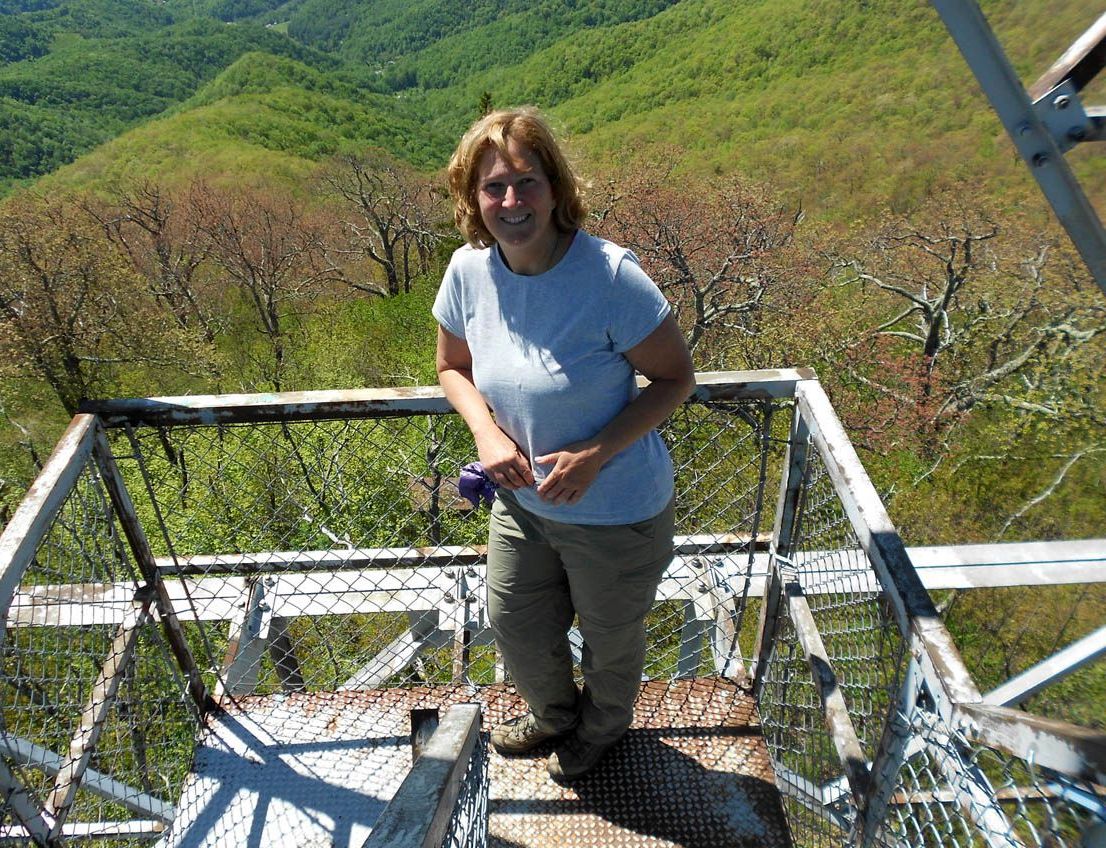 Arriving at the top of the five flights of stairs was made that much more interesting by running into a nice former military serviceman who used to build these same type fire towers while in Afghanistan.   Just the two of us alone on top, he was reliving memories as I was captivated, listening to his stories of climbing the towers in the desert after dark to watch the night skies light up from star power, only to see them eclipsed by fire power.   One of those rare “perfect stranger encounters” that moved me by the gift of a glimpse of a world I will thankfully know only through his eyes.

How can any hike near something called the “Cradle of Forestry Discovery Center “ be a bad hike? 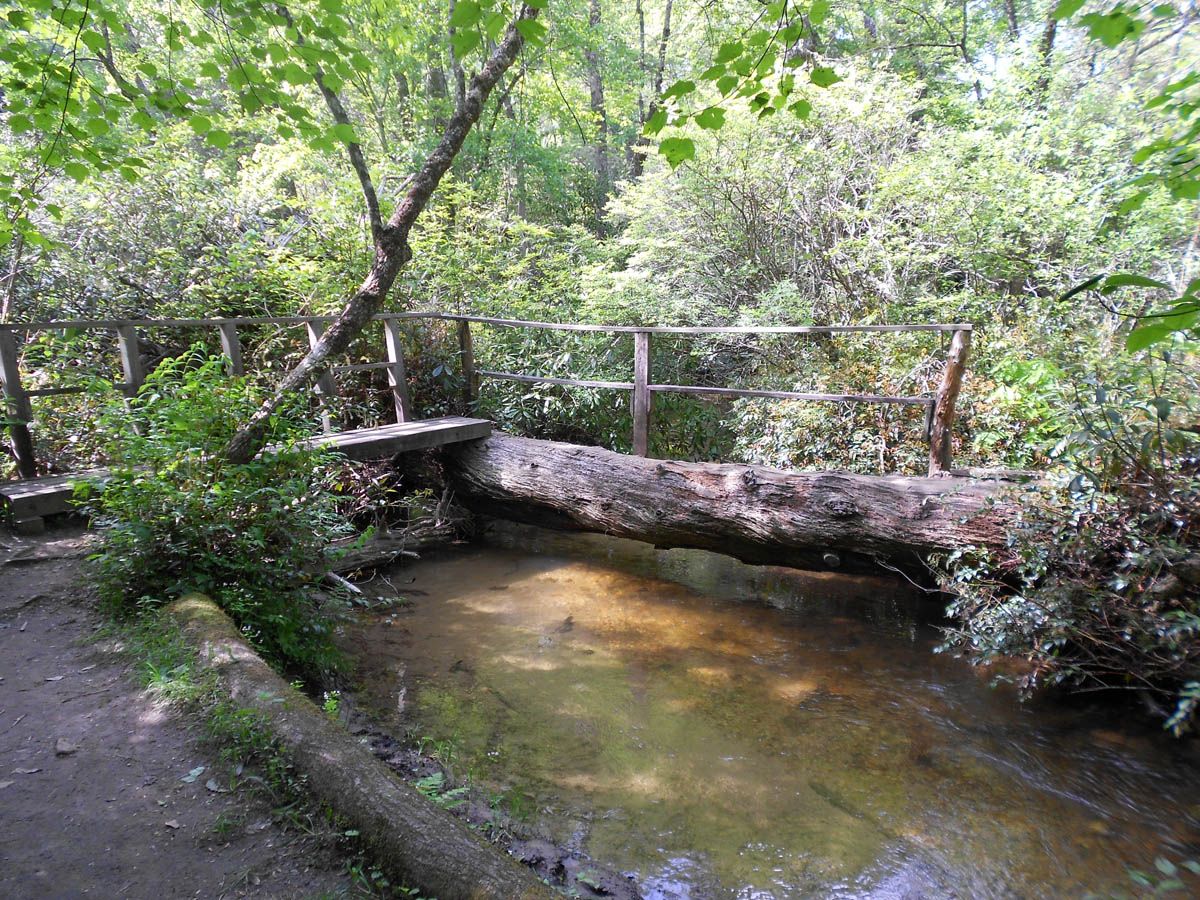 This is one hike I have wanted to do for some time, only because of its namesake.  A nice, leisurely 5 mile circuit hike, it was supposedly named for the pink beds of rhododendrons which were unfortunately not in bloom yet, leaving the Pink Beds more like “green beds,” a lush verdant green fern-filled woods. 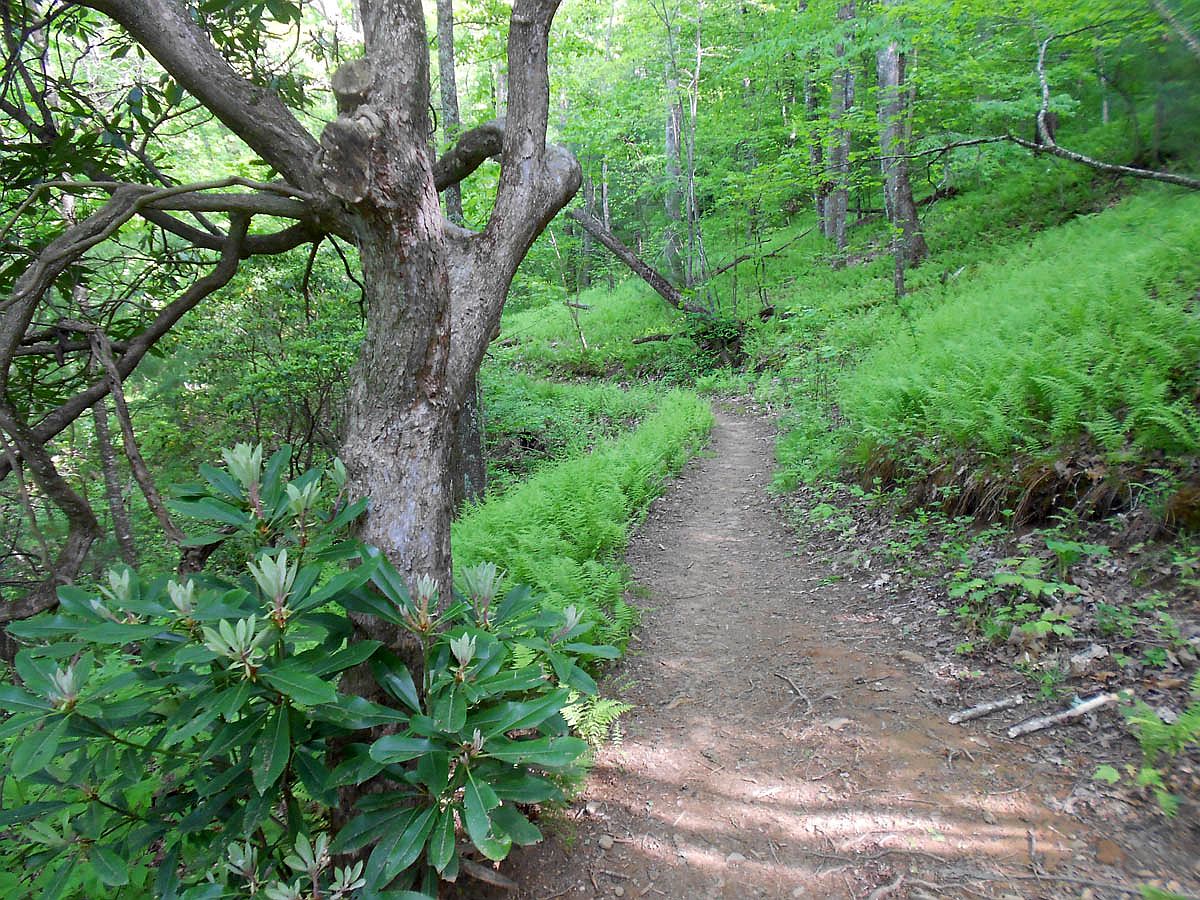 Beaver’s have been very active in this area, damming up the bogs with fallen water-logged trees, resulting in the necessity for some pretty fancy boardwalks and stream crossings.   Most of this trail criss-crosses along the South Fork Mills River, recently recommended for classification under LBJ’s  “Wild and Scenic Rivers”  Act. 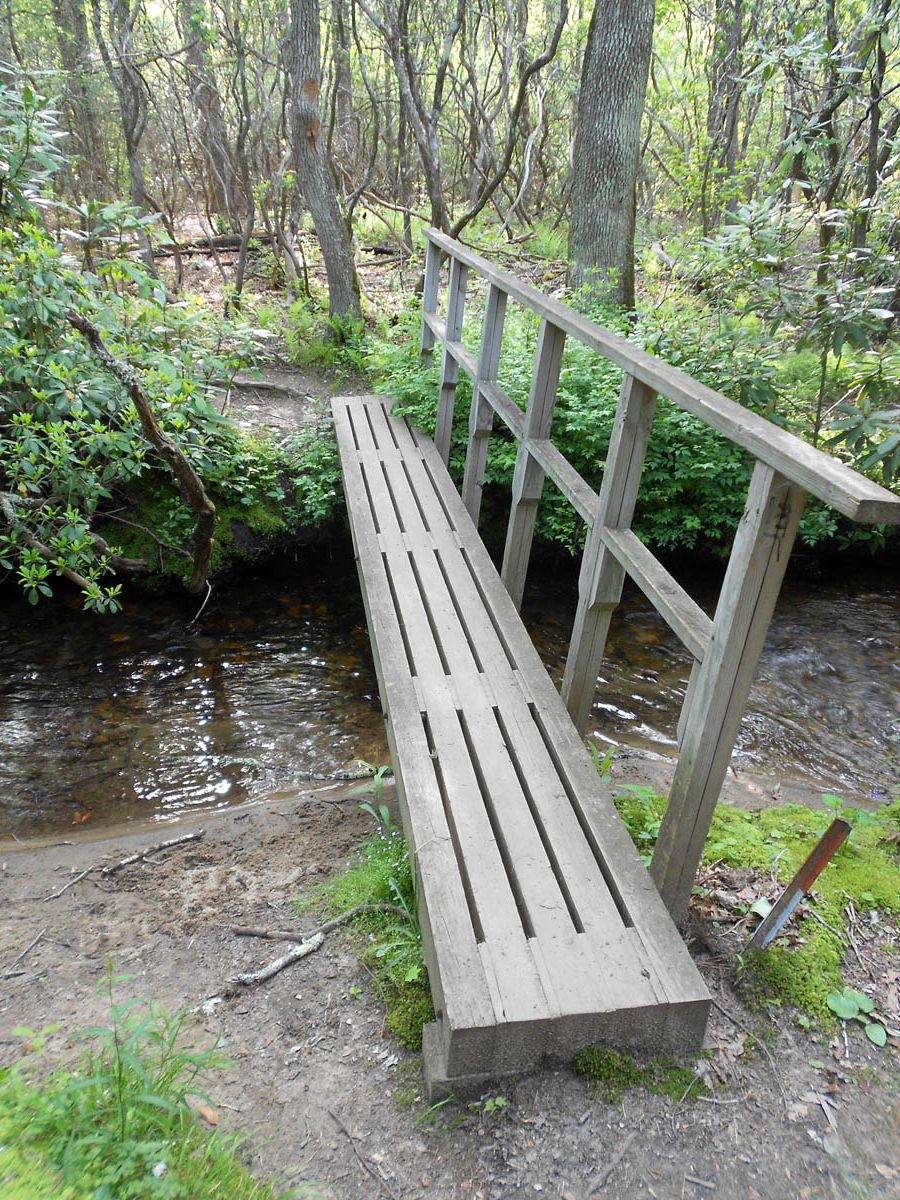 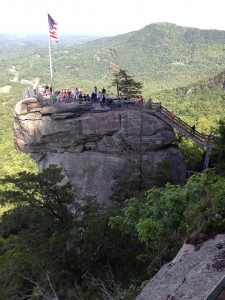 Whenever I mention hiking in Western North Carolina, I am always asked, “Have you ever been to the Chimney Rock area?”   Made famous by the making of the movie, “The Last of the Mohicans,” I must be candid in saying I expected something a whole lot more pristine and a whole lot less of an amusement park attraction.   Anywhere there are elevators to the top and “homemade fudge” for sale, it is bordering on a place I don’t want to be.

I must say the rock itself was quite a natural phenomenon (though I could think of a much more fitting description than a “chimney!!”)    But seeing it overrun by the mass of humanity, especially after the exorbitant $12 admission fee (REDUCED from $15!  Because the Hickory Nut Falls trail was closed due to landslide) was a bit of a buzz kill.    But I was not going to let twelve bucks stand in the way of being able to answer, “Yes.  Been there.  Done that.  Did NOT buy the Tee Shirt OR the fudge!” 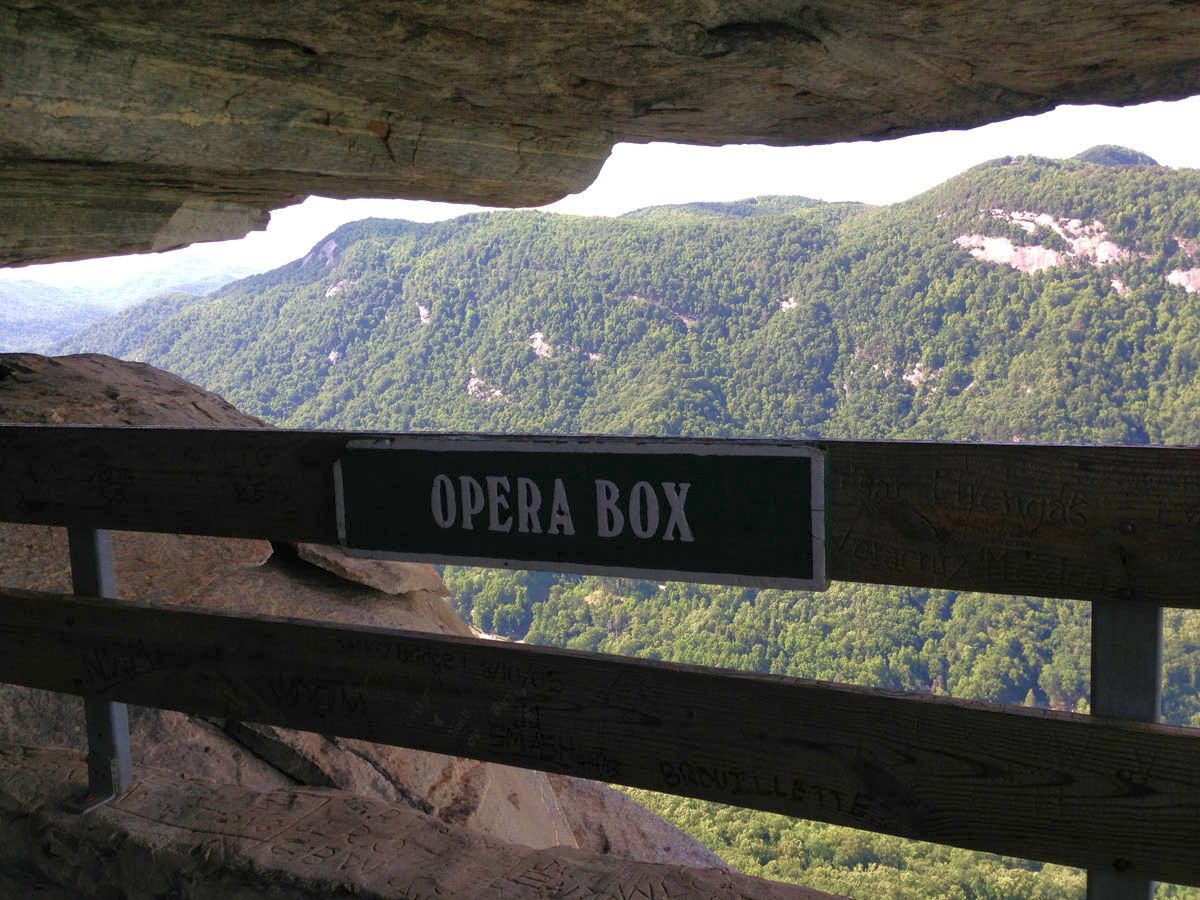 View from the “Opera Box.” 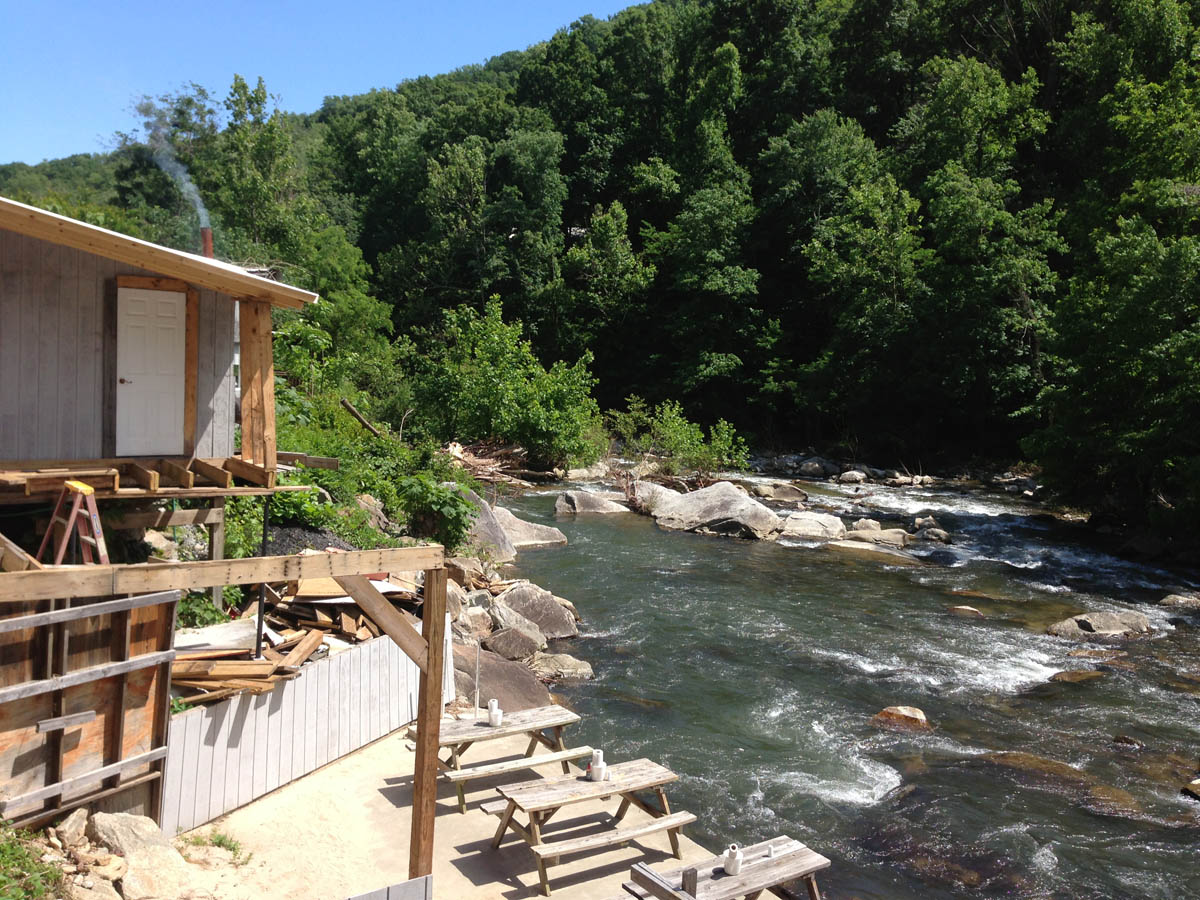 Nice peaceful place for a BBQ sandwich off the “main drag”…

A short, cheerful trail along the ridge line from the Mt Pisgah picnic area to the Inn itself, this trail visits the former site of mountain hunting lodge built by George W.  Vanderbuilt, Bucksprings Lodge, built for entertaining guests of the Biltmore House back in the early 1900’s. 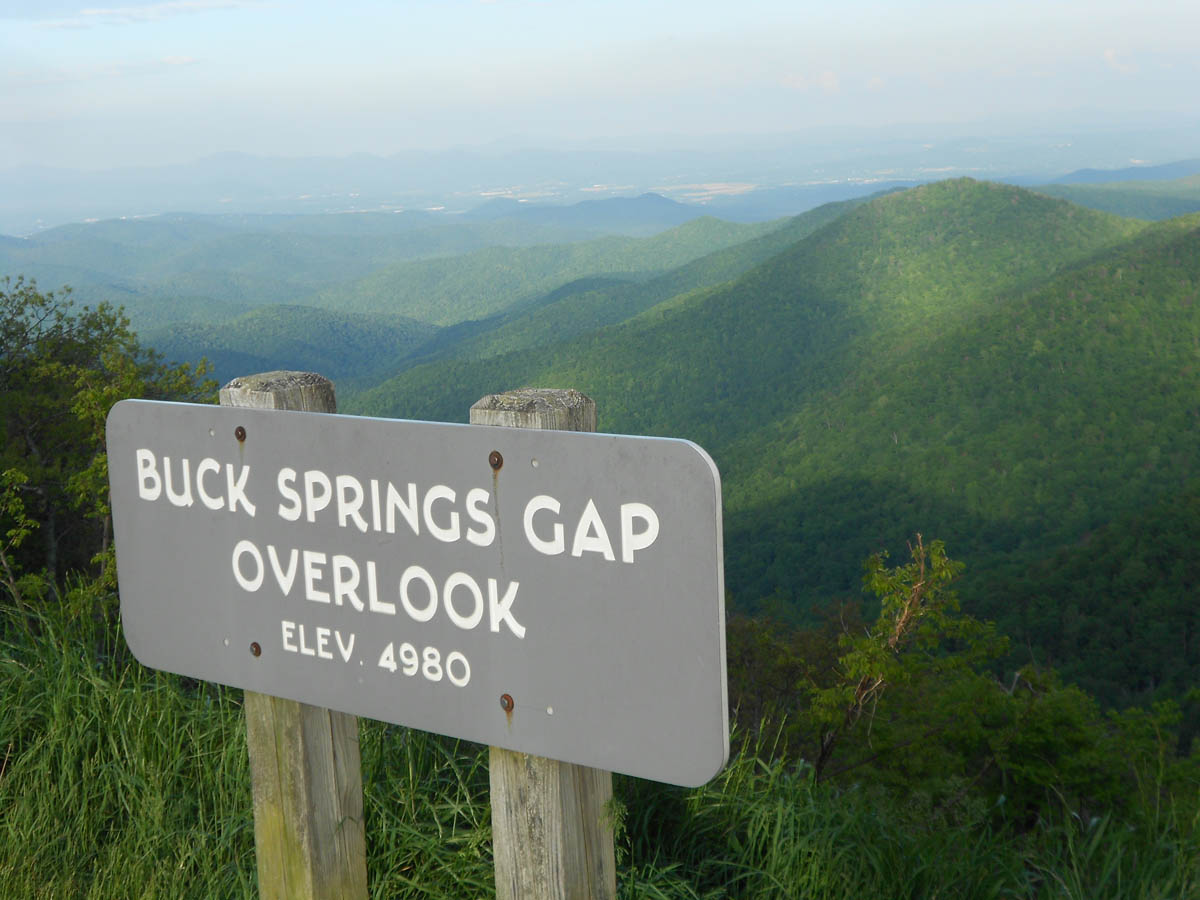 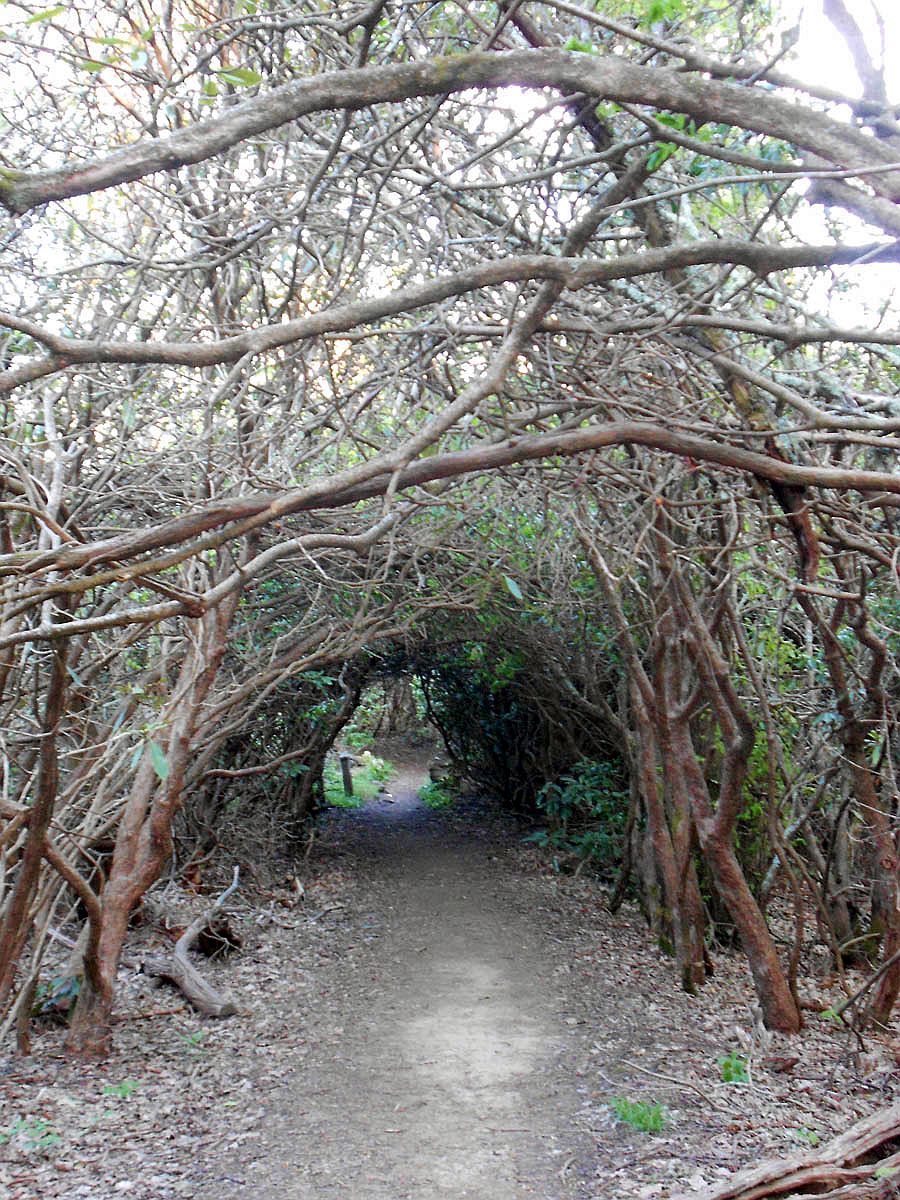 The lodge is no longer there, sadly razed in 1961 by the Blue Ridge Parkway Superintendent because it “did not portray a lifestyle indigenous to the Southern Appalachian Mountains.”   All that remains are some retaining walls from the springhouse. 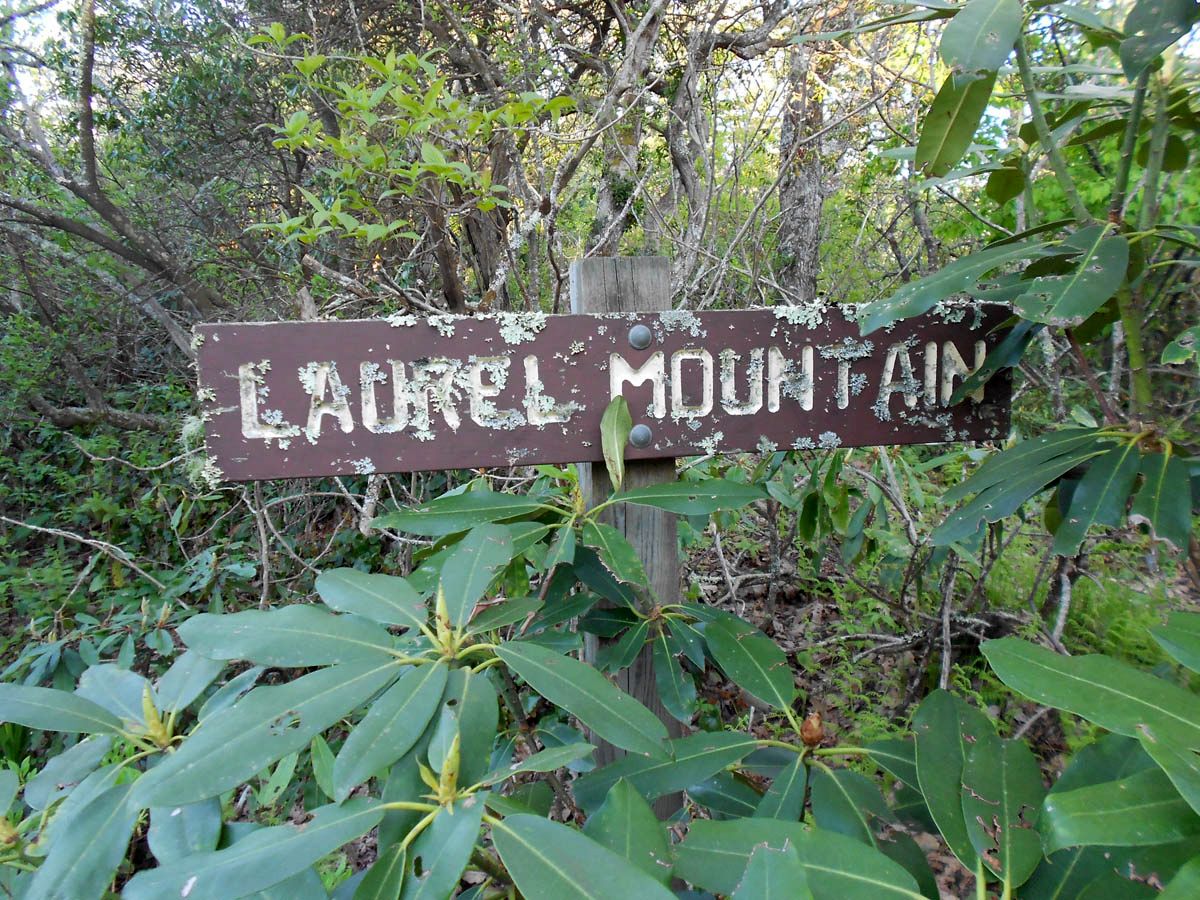 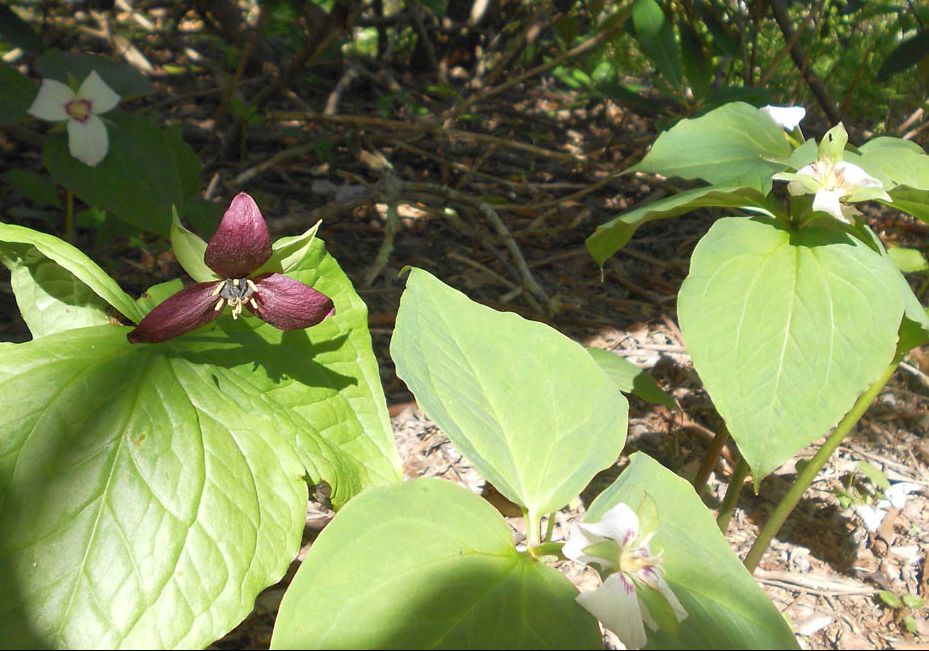 Trilliums, white and red, hard to photograph as they are “nodding.”

I will stop there for now, with the hope of more hiking to come during my stay in Asheville…as they say in Texas, “Good Lord willing and the creeks don’t rise”…Oh wait!  Too late! 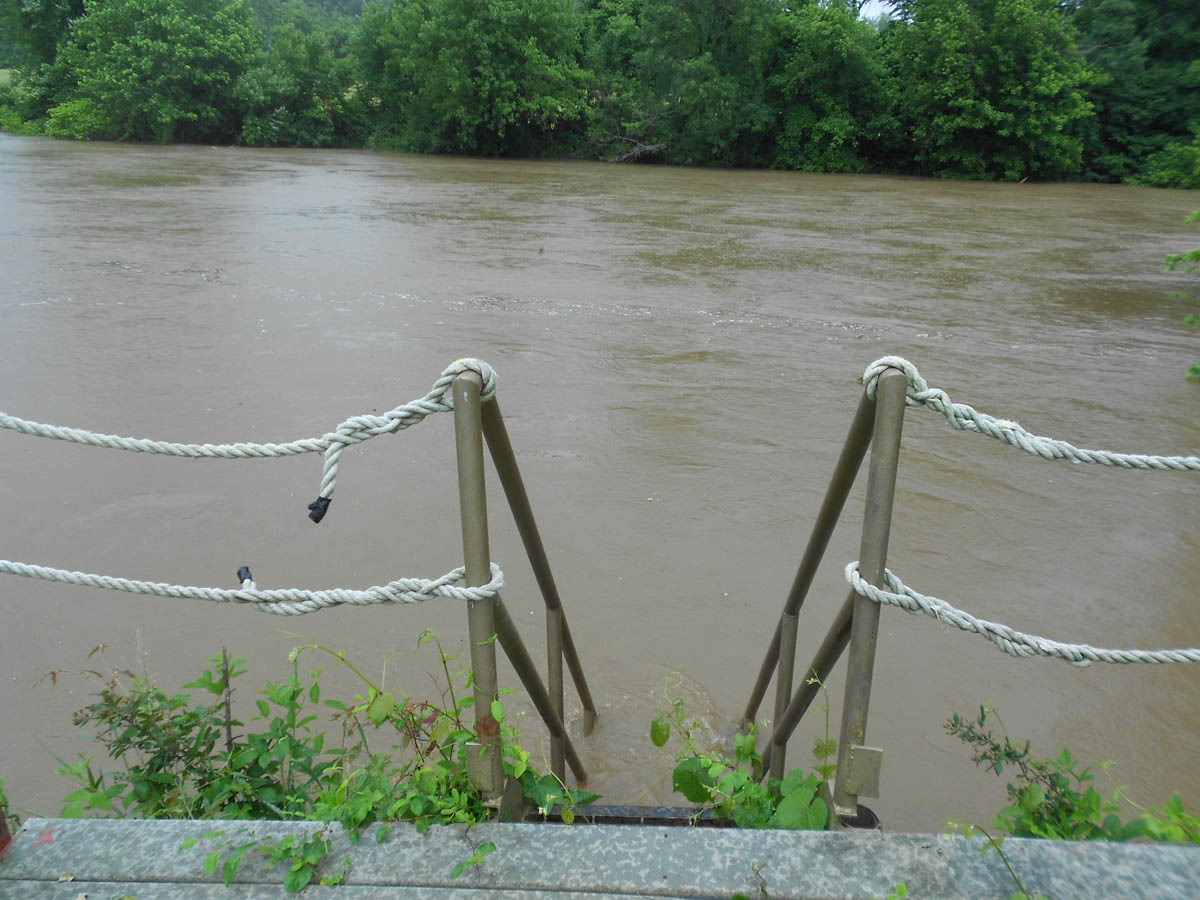 French Broad River, no thanks to Hurricane Andrea…

2 thoughts on “Hiking in and around WNC”