I left Stone Mountain RV Park as the weather was getting worse, and so were the crowds.   The park was full due to the long holiday weekend, and I had not made my reservation far enough in advance.   With the solid week of rain, spaces were still open, so I felt sure they had cancellations.  But a family with three small children and two barking Boxers in a pop-up tent had just pulled in next to me.    It was the sword fight with dueling aluminum poles from the picnic shelter that made my decision to forgo checking for cancellations easy.

My GPS routed me down to 285, Atlanta’s perimeter road, and up GA400, the main artery linking Atlanta’s ritzy shopping and restaurant areas with the more affluent “bedroom communities.”   While living here, I avoided GA400 at all costs, likening it to “Asshole Corridor” with speeding Hummers and Lexuses (Lexii??)  playing “Shoot the Gap” at every entrance and exit ramp.   So my GPS tells me this is the road I must take.   Driving a 5 ton vehicle.  With a tow car.  In a blinding rainstorm.

I knew it wasn’t right, I should be going up nearby I-85 instead.  But it was already starting to pour while I was hooking up the Tracker.   I was soaking wet.  And after the O-MG ring experience at the dumping station, I just wanted someone to lead me out of there. 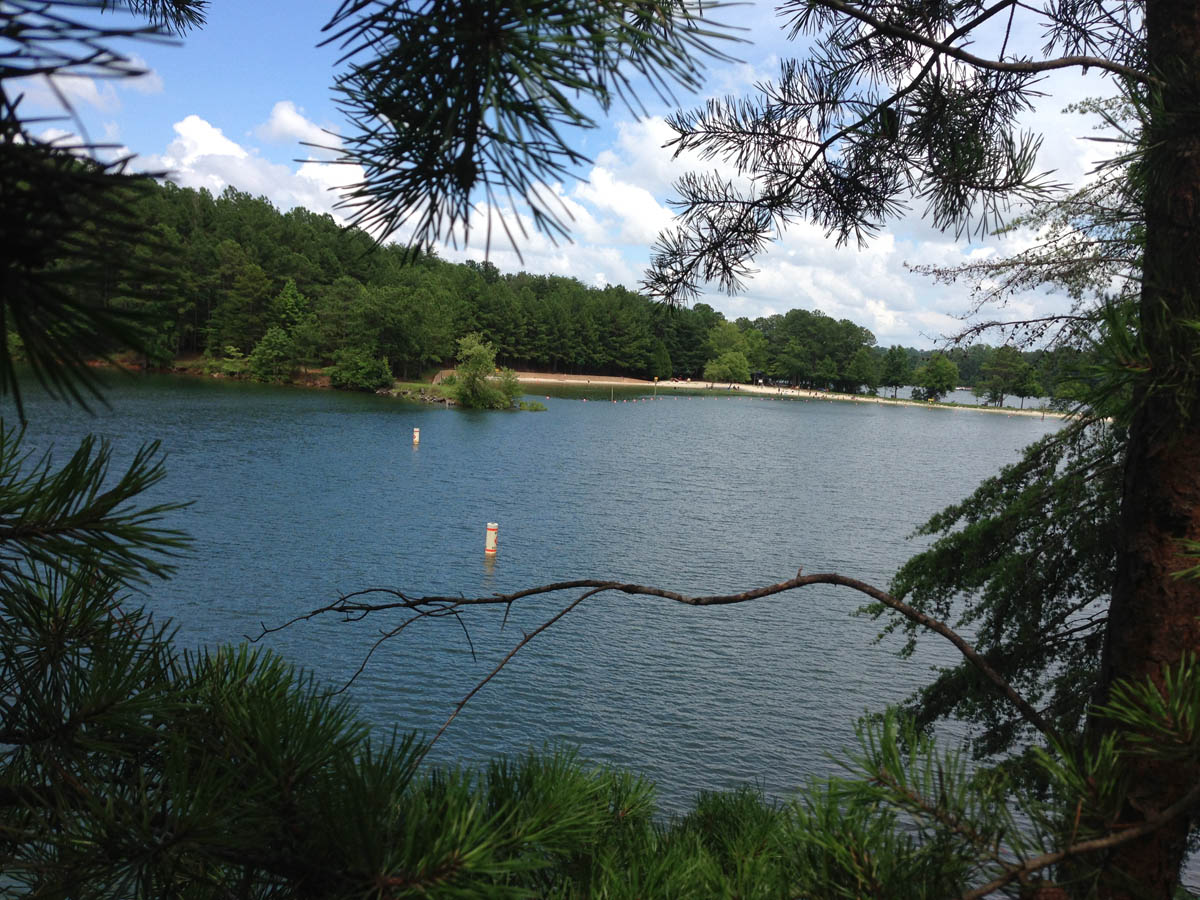 I was headed an hour away, bound for Shady Grove Campground in the tall pines of Lake Lanier.  When I first bought my Sea Eagle kayak, I used to take it up to Lake Lanier to one of the day use parks, and paddle over to this campground.  I would raft up along the small boat ramp, go for a swim, and then walk around the campground for awhile.   Every site seemed like a primo location with giant shade trees and a water view, as the campground was its own little peninsula jutting out into the lake.    So during my kayaking visits, I vowed I could come back here to camp for a week when and if I ever got an RV. 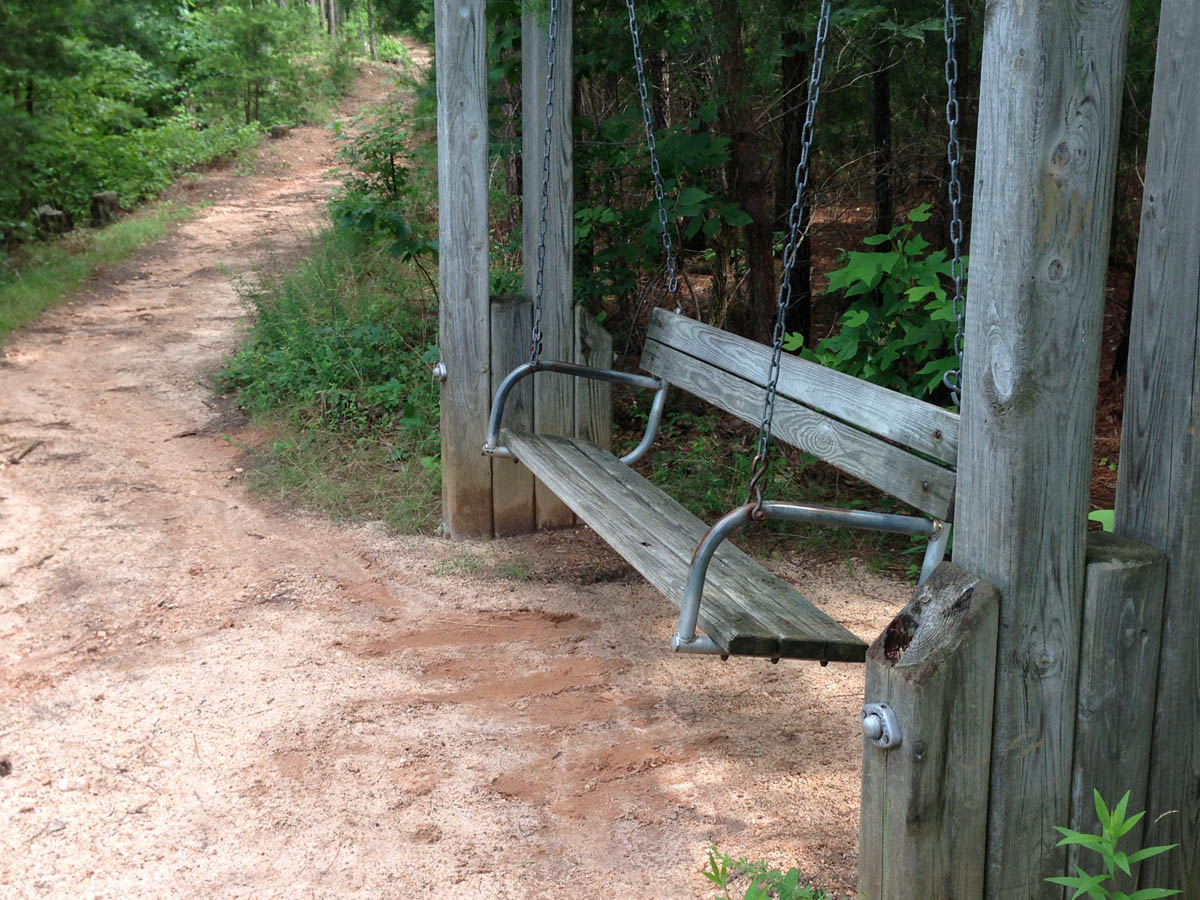 I got a lovely spot in the woods with only one other camper in sight and a view of the lake through the lightening-bug filled trees.   It was the opposite end of the “vibe scale” from stone Mountain where I just left, so it felt like nature’s nirvana.   I took a walk down to the little boat ramp, but it looked much larger than I remembered.   But then I was last here during one of the worst droughts on record when the lake was down 20 feet.   It is now 1.5 feet above “full pool,” so I figure it just looked different because it was higher up.   And besides, my perspective is different now that I am inside the campground. 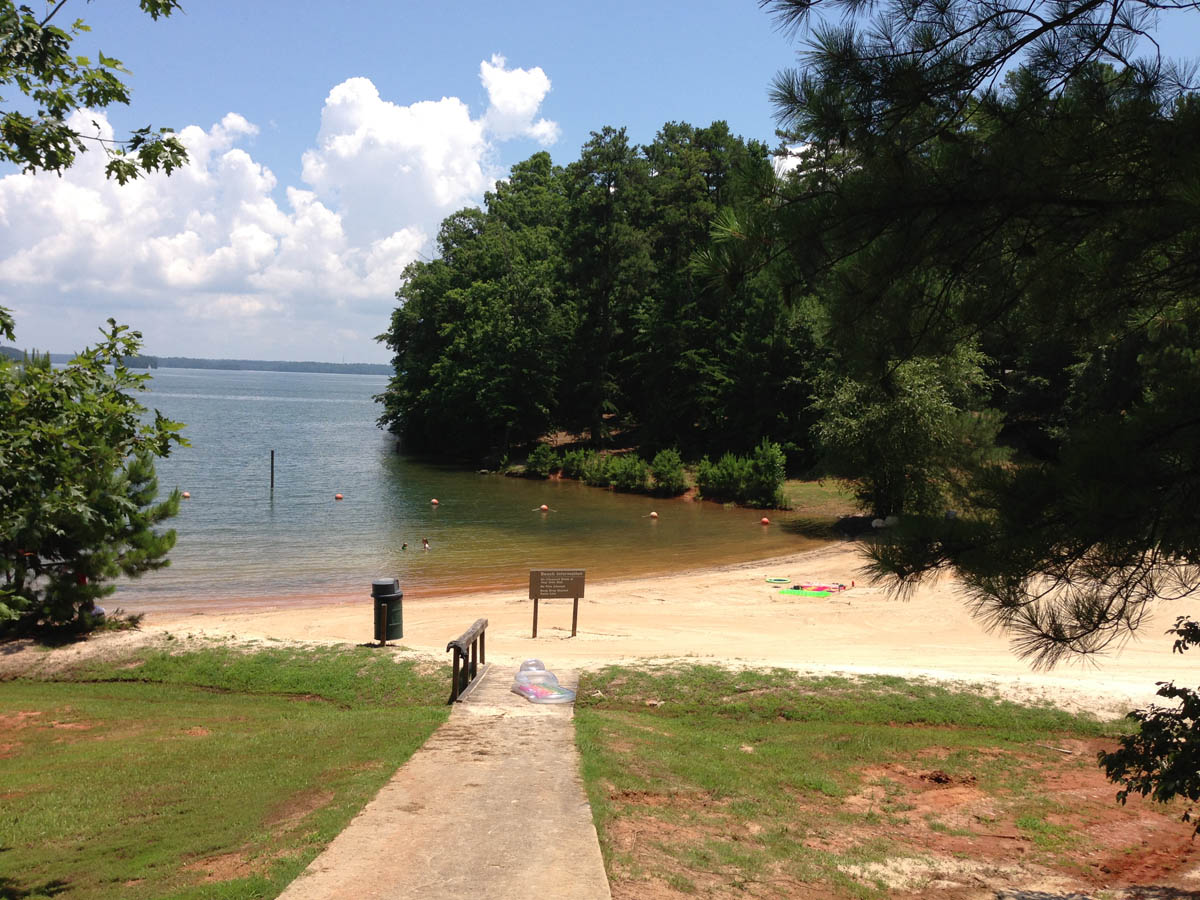 Checking the map for my favorite hiking trail, I searched for Laurel Ridge Trail which goes up over Buford Dam, along the Chattahoochee River, through stream filled forests, marsh land, and along the lake for four miles.  Only I could not find the DAMNED DAM!! 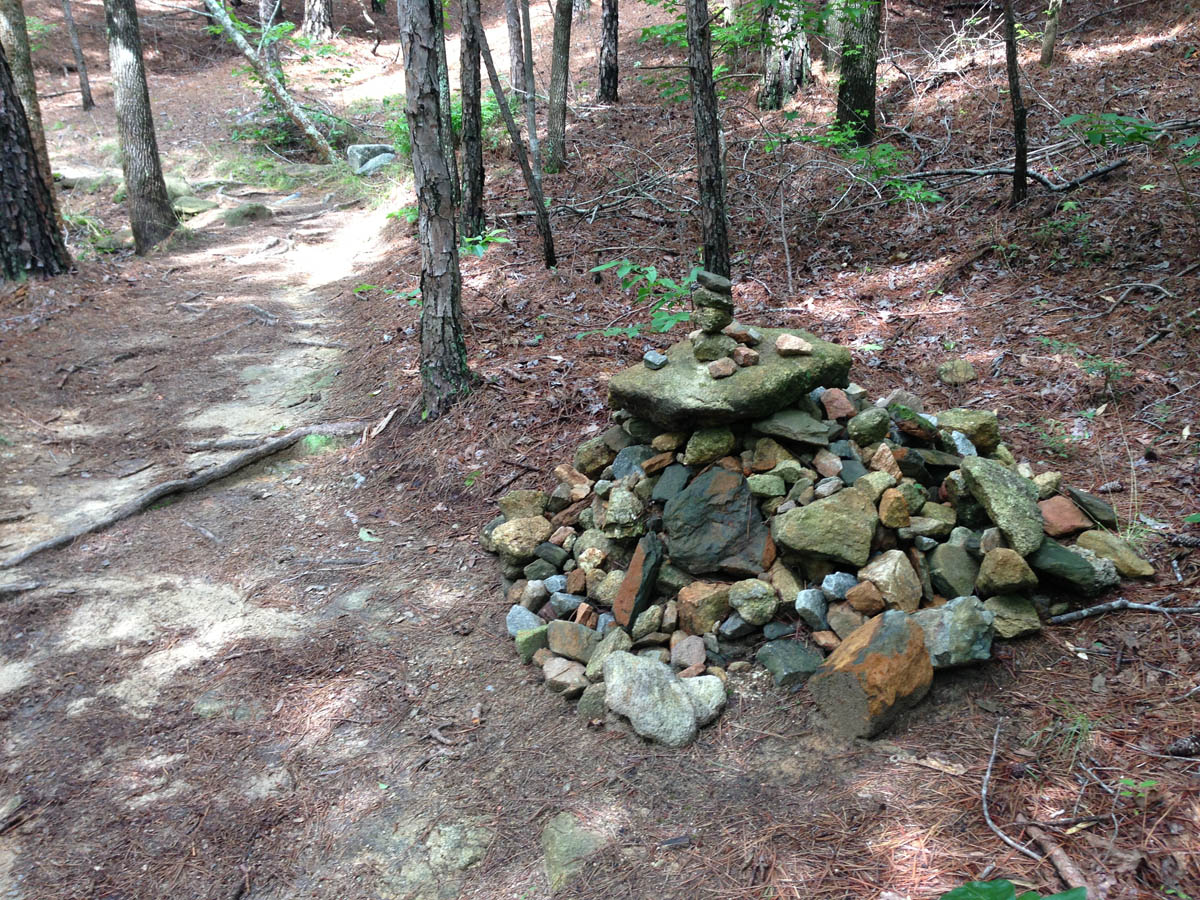 Which way to the trail?

Then I realized why my GPS led me down the “wrong” path.   I am not at the campground I thought I was!   My old stomping ground where I used to kayak is Shoal Creek, not Shady Grove!   No wonder it didn’t look as familiar as I expected!   Good thing I discovered it now, and not when I had paddled halfway around the lake trying to find my “old cove!”   My apologies to the GPS for all the names I called her when she sent me up GA400! 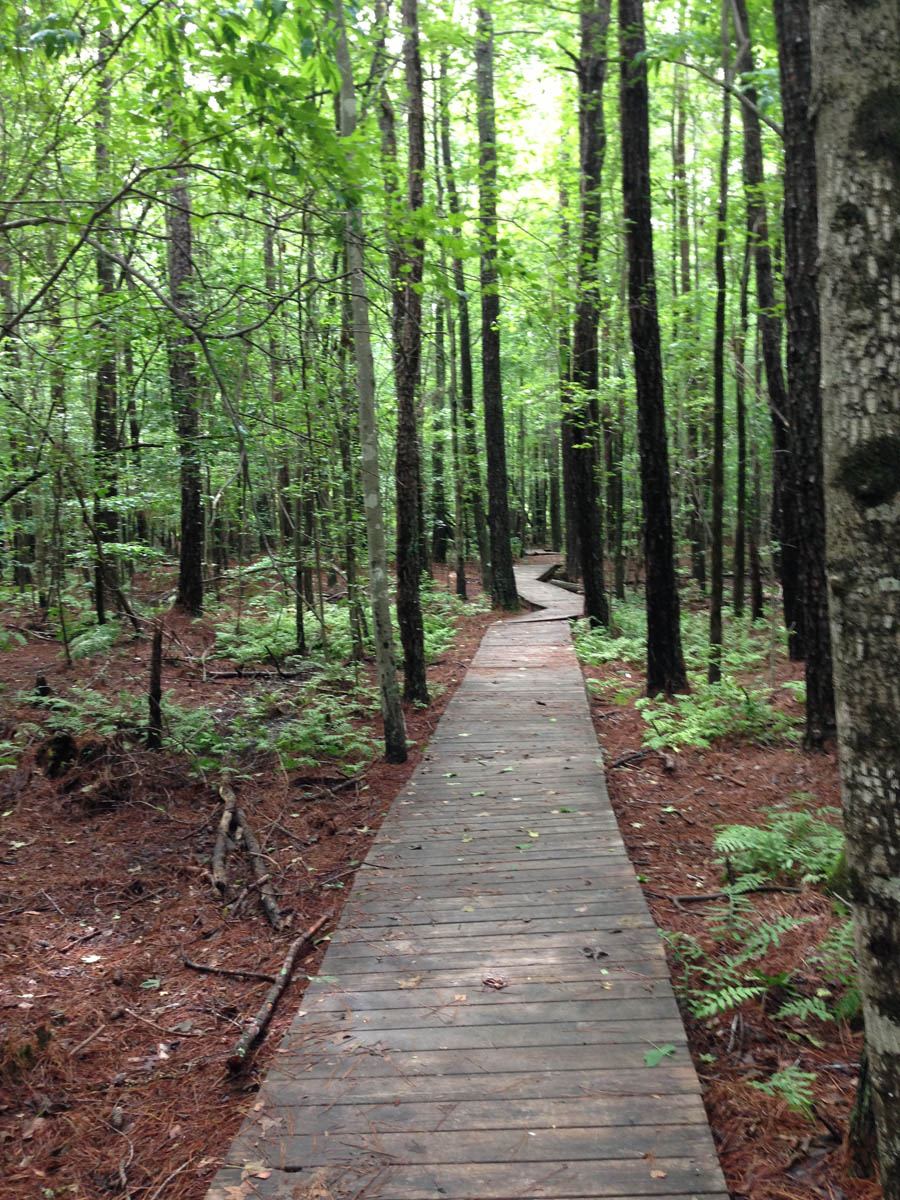 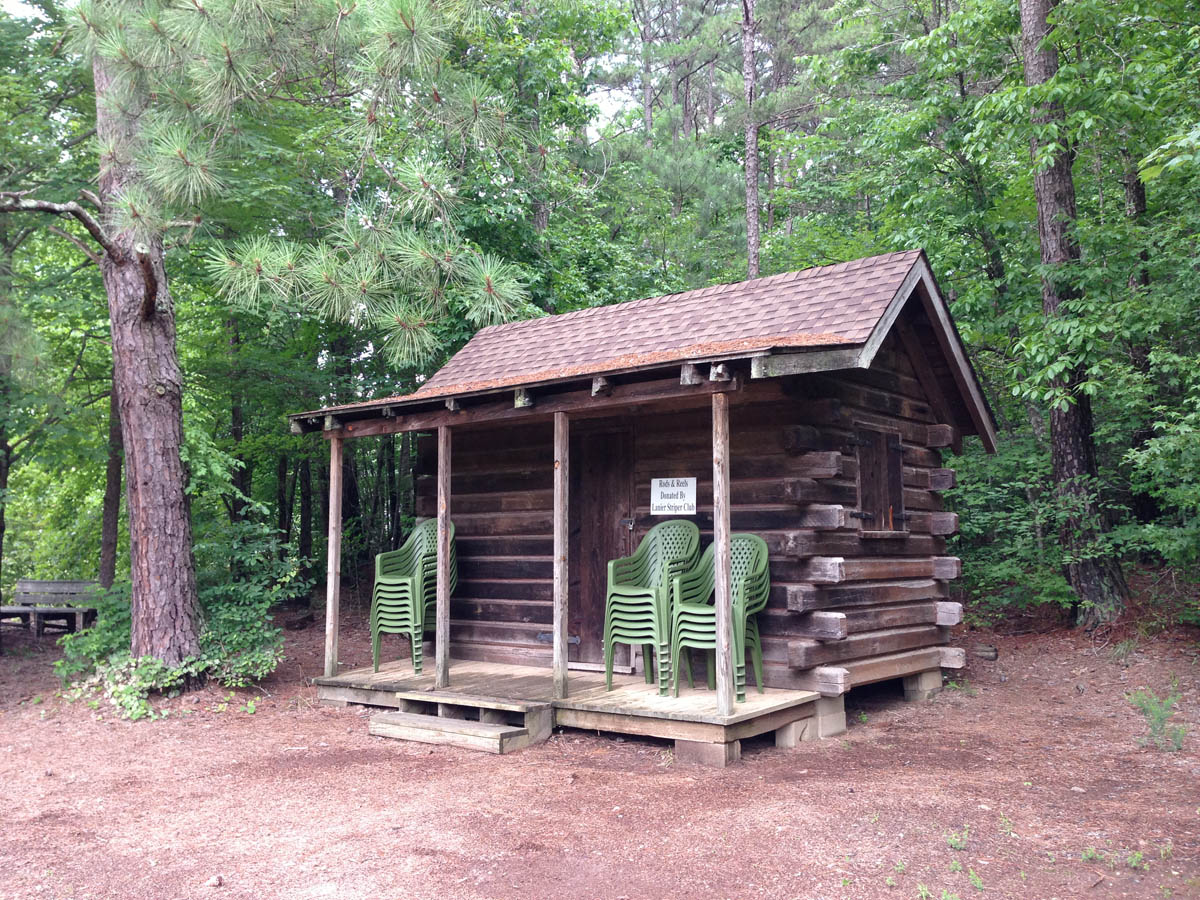 What are the odds of two campgrounds, BOTH two words, BOTH starting with the letter “S,” and BOTH on Shadburn Ferry dead end road?  But at opposite sides of the lake??   Apparently Shadburn Ferry road was a through street back in 1956 before the dam was built.  Both campgrounds are managed by the county, so they look almost identical, just across the lake from one another. 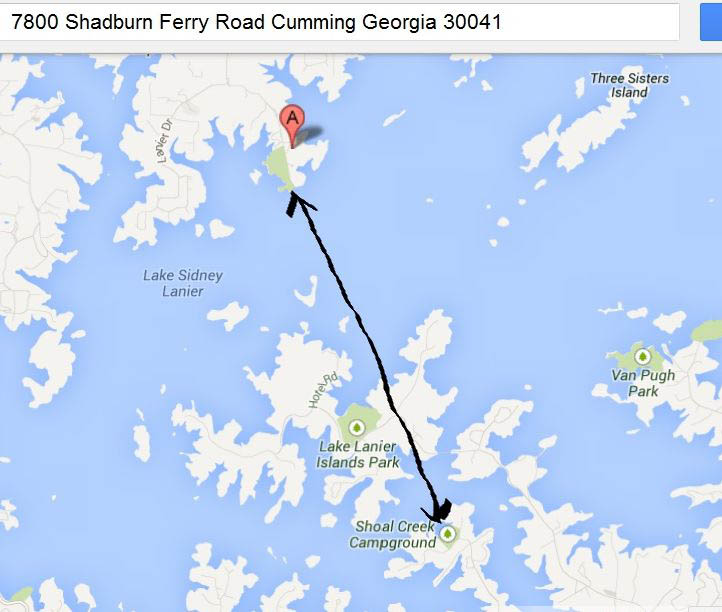 For a fraction of a second, I thought “I’ve gotta move!  This wasn’t part of my plan!”  But then I settled to my senses and realized it is right where I am supposed to be…..at one of the cleanest, well maintained, most private serene campgrounds I believe I have ever seen. Yes, the rose smells just as sweet! 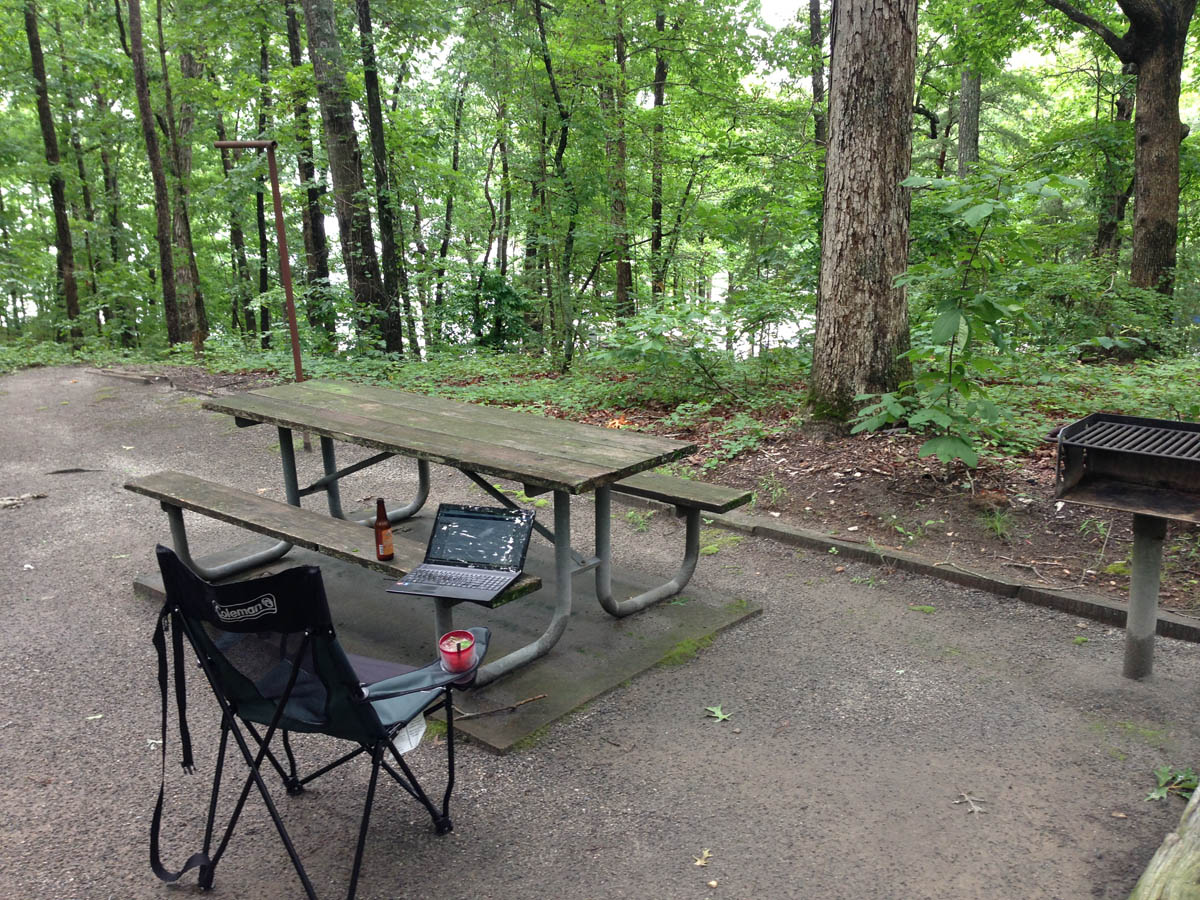 4 thoughts on “Shady? Shoal? A rose by any other name?”