I should have known something was up when I was on the phone with a colleague who asked me, “Do you have a pet bird??” We all work in the virtual environment, so it is not uncommon to hear dogs barking, kids yelling, or parakeets squawking in the background. Now that she mentioned it, I had noticed that their birdsong was unusually LOUD!

That, coupled with the fact that I had seen a couple of small brown birds flying atypically close between my rear view mirror and window still didn’t clue me in to the fact that there was a major construction project going on above me. It wasn’t until I spotted the little bugger peeking out at me from my slide awning that I realized I had some squatters in the midst!

As I noticed more and more activity, I decided I had better check out the space and see if they had built a nest. I don’t have any kind of ladder, so I rolled the Tracker up alongside the View and stood on the hood, poking around under the slide awning with the broom. Look what came out! 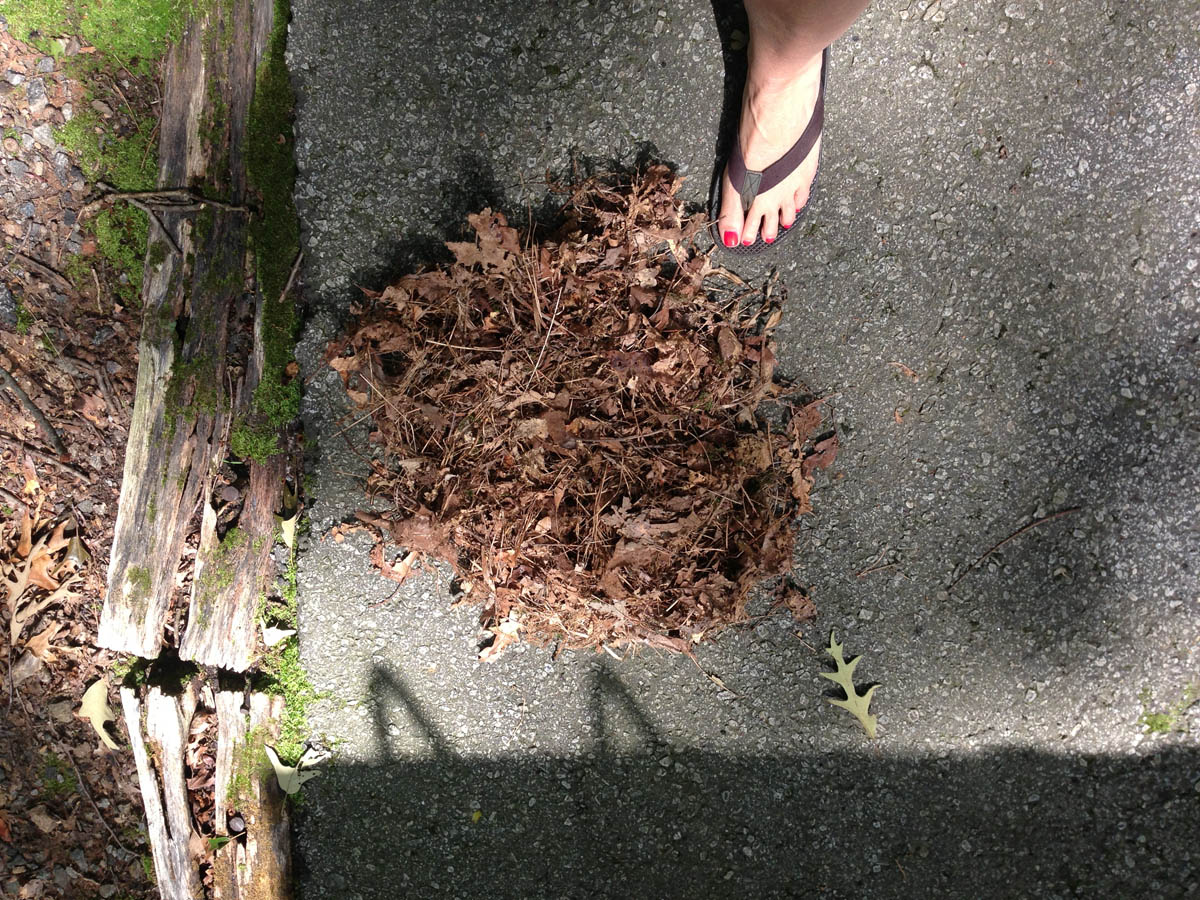 I called the campground office to see if they had a step ladder so I could peer into the gap to see if I got it all, or if there was more. No surprise from this extremely well maintained, friendly campground, they sent out not just a ladder, but the maintenance crew too! 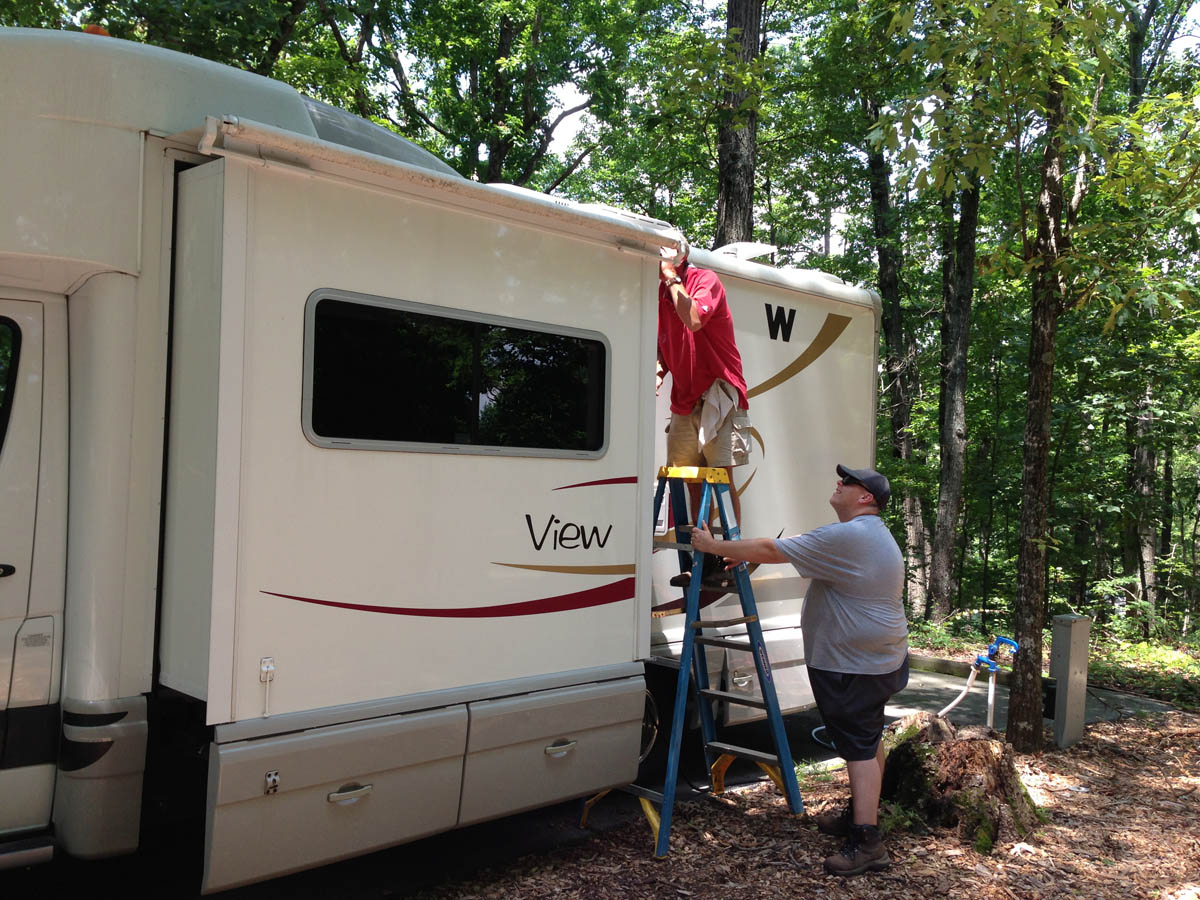 I am not a “birder,” only able to identify birds by color, (bluebird, redbird, blackbird) therefore all I knew was “a little brown bird” had taken up residence. However, the guys were more informed, explaining that it was a “House Wren” who is a cavity nester, who builds the nest to fit the space so as to block out predators. Even though they only need a tiny cup-sized hole for the eggs, they will build the nest big enough to fill the entire cavity. 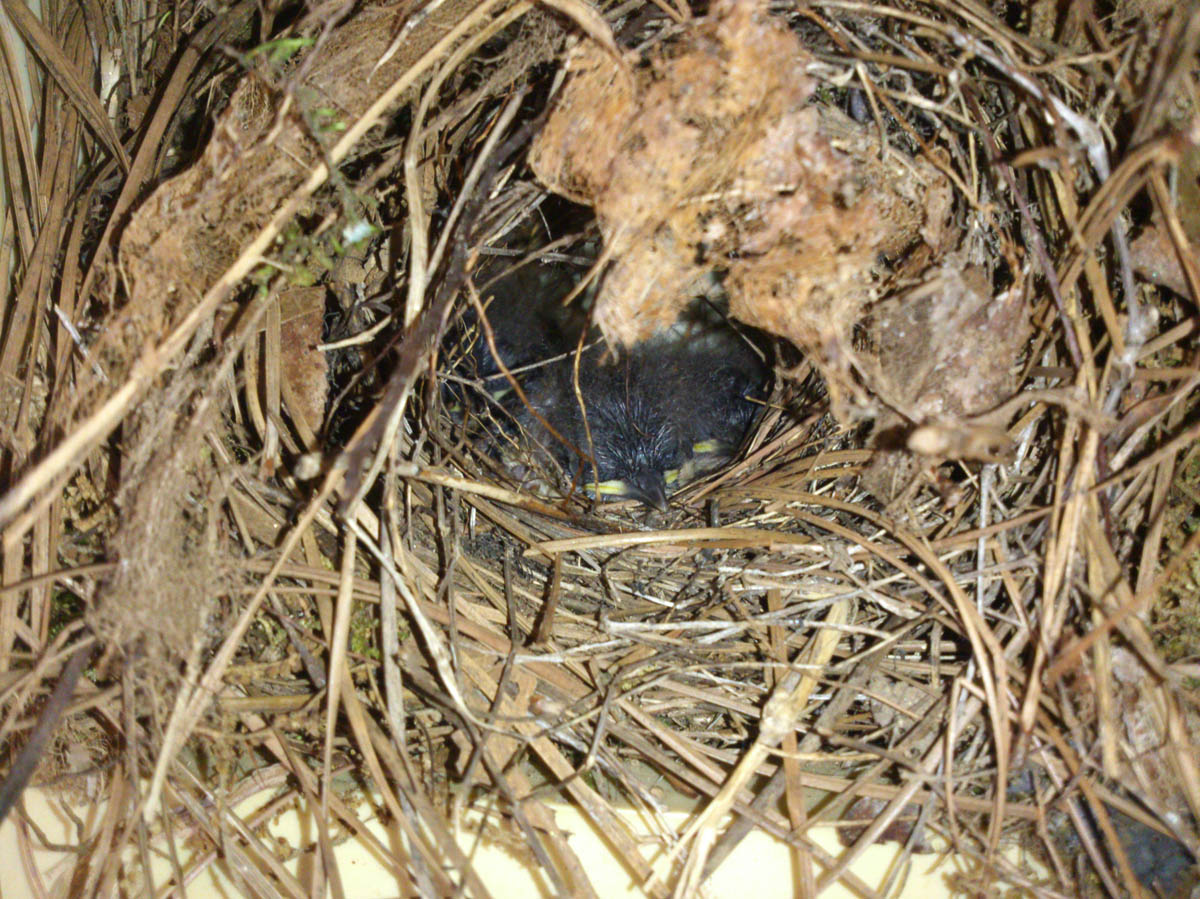 Photo of “Little Mama” in the nest, courtesy of David, the Maintenance Guy

They like to build around people, because it is a symbiotic relationship in that people help keep the snakes away, their number one predator. Apparently, the male actually builds the nest to spec on the order of the female, who serves as chief inspector. 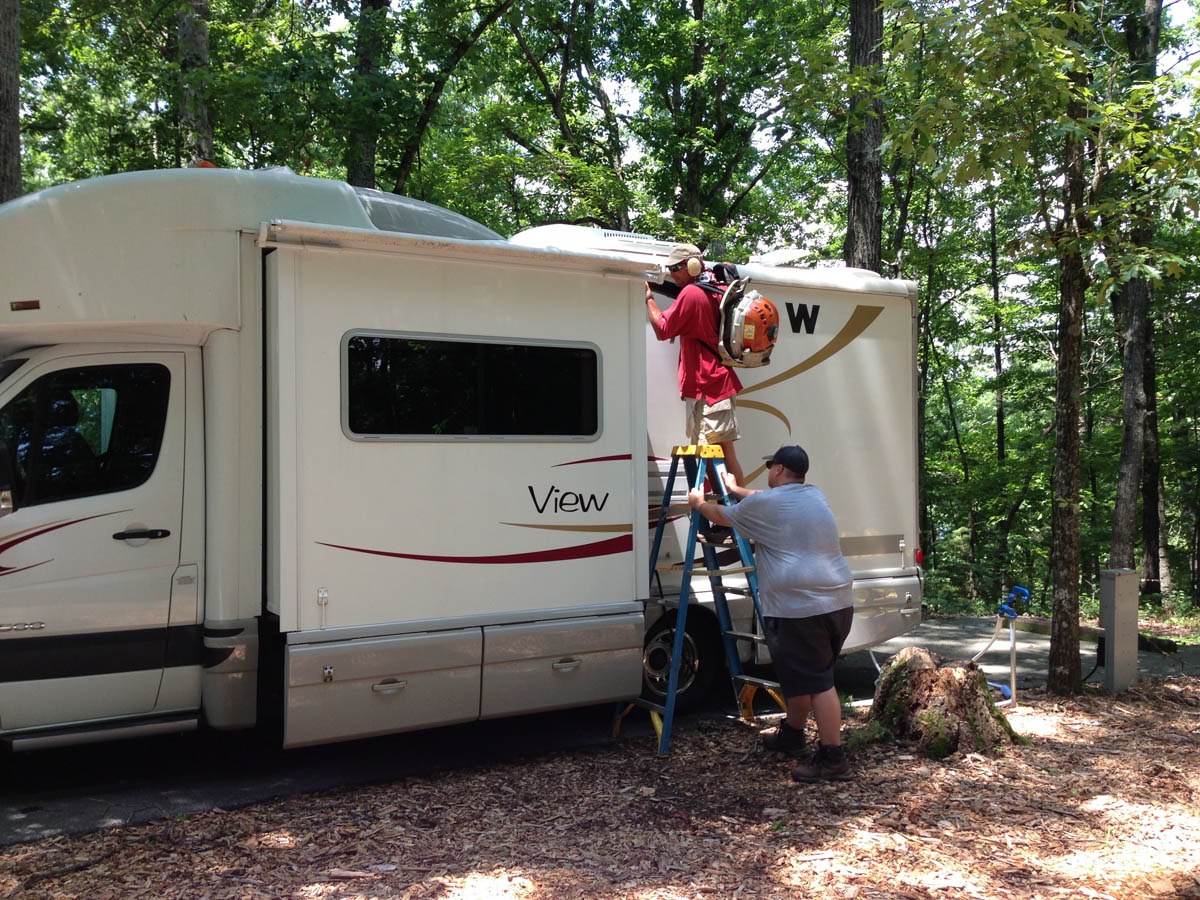 The maintenance guys helped me get it all cleaned out, then suggested I close the slide for a while, because the birds would try again almost immediately.

Sure enough, within the half hour, I noticed them hopping and landing on my bike, ducking in under the old blanket I had laying on top. After only 20 minutes work, they had already started a new foundation. 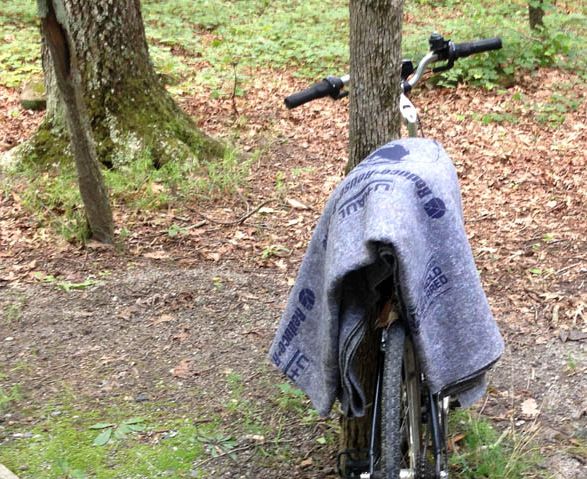 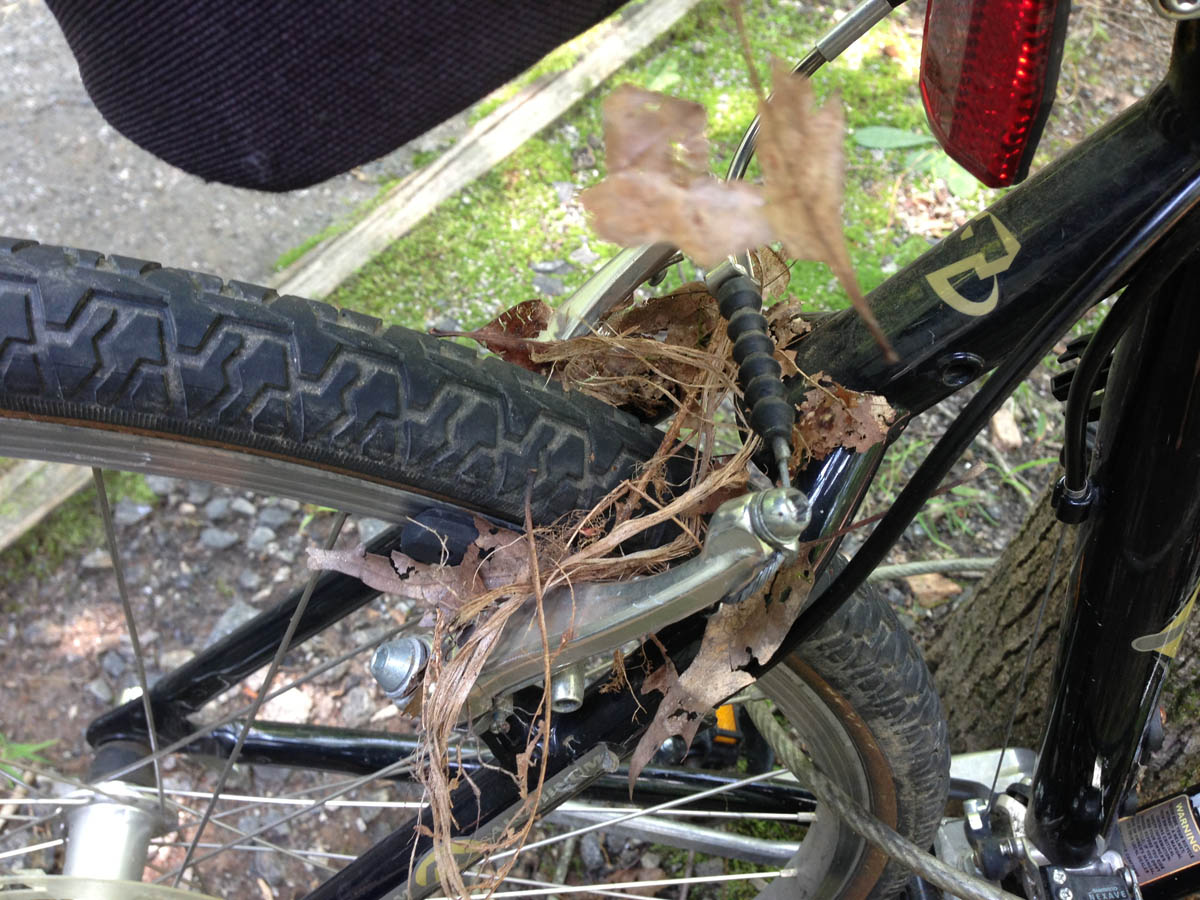 And then this. Good thing I was leaving the next day, as they weren’t relenting. 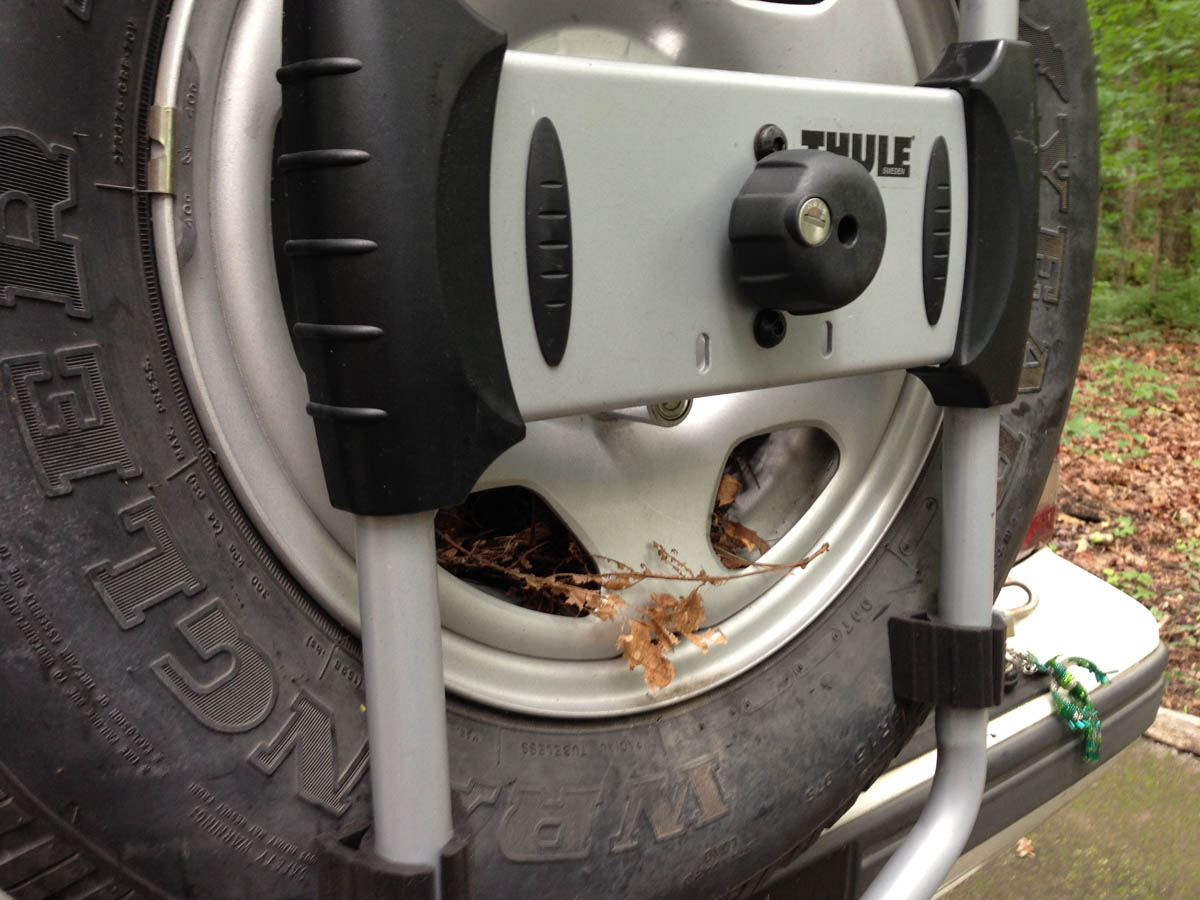