Lake Lanier is dotted with a lot of small, uninhabited islands ranging in size from a tiny mound of dirt with a lone tree, all the way up to islands large enough to be home to the Lake Lanier Islands Resort and Water Park. 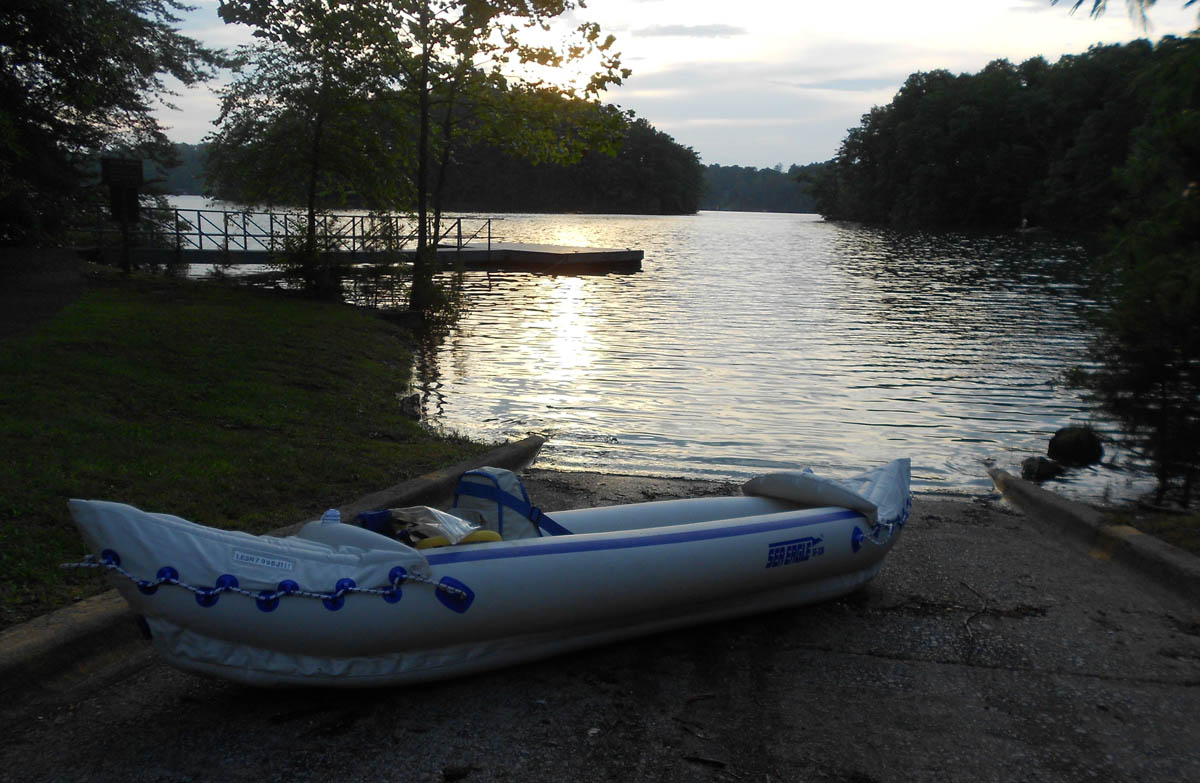 “MY island,” off to the left

It was these idyllic little islands and coves that made me want to return to Lanier, as they are perfect spots for my Sea Eagle inflatable kayak. But the nightly storms were keeping me off the lake. It had rained every single evening for eight days straight. The few rare times when it did clear off, it was short-lived. Just like clockwork, the rumble of distant thunder seemed to signal the end of the work day. As soon as I would sign off for the evening and start to put the work laptop away, giant thunderclouds would roll through and spoil my paddling plans (not to mention my plans for the freezer full of meat I brought for grilling, so royally pissed off, shaking my tongs at the clouds and cursing, determined to stand out there in the rain with my glass of wine and cook that damned food if Noah sailed by to ask for a bite!)

Finally, on my next to last night in Shady Grove, the evening thunderstorms came early, leaving behind the promise of patchy blue sky in their wake. I made a mad dash to the small boat ramp, pumping up the Sea Eagle, breaking my previous inflation record of a little more than 10 minutes, flat out! 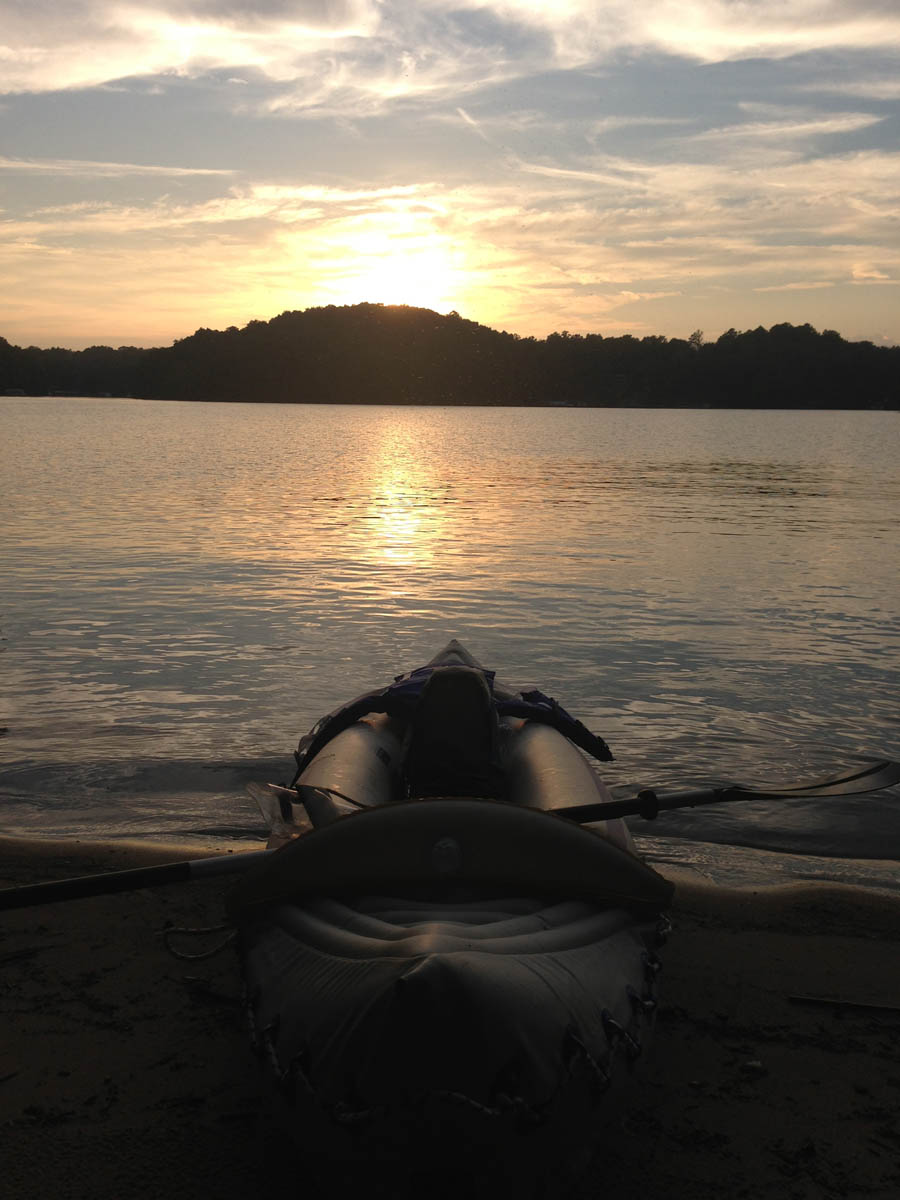 I headed for one of the decent sized islands to circumnavigate as the sun started to settle behind the clouds. I was wishing for a place to beach the kayak and go for a swim, but there was not much to see but tree roots. But then as I approached the back side, I caught a glimpse of a perfect little sandy beach in a calm, crescent shaped cove. 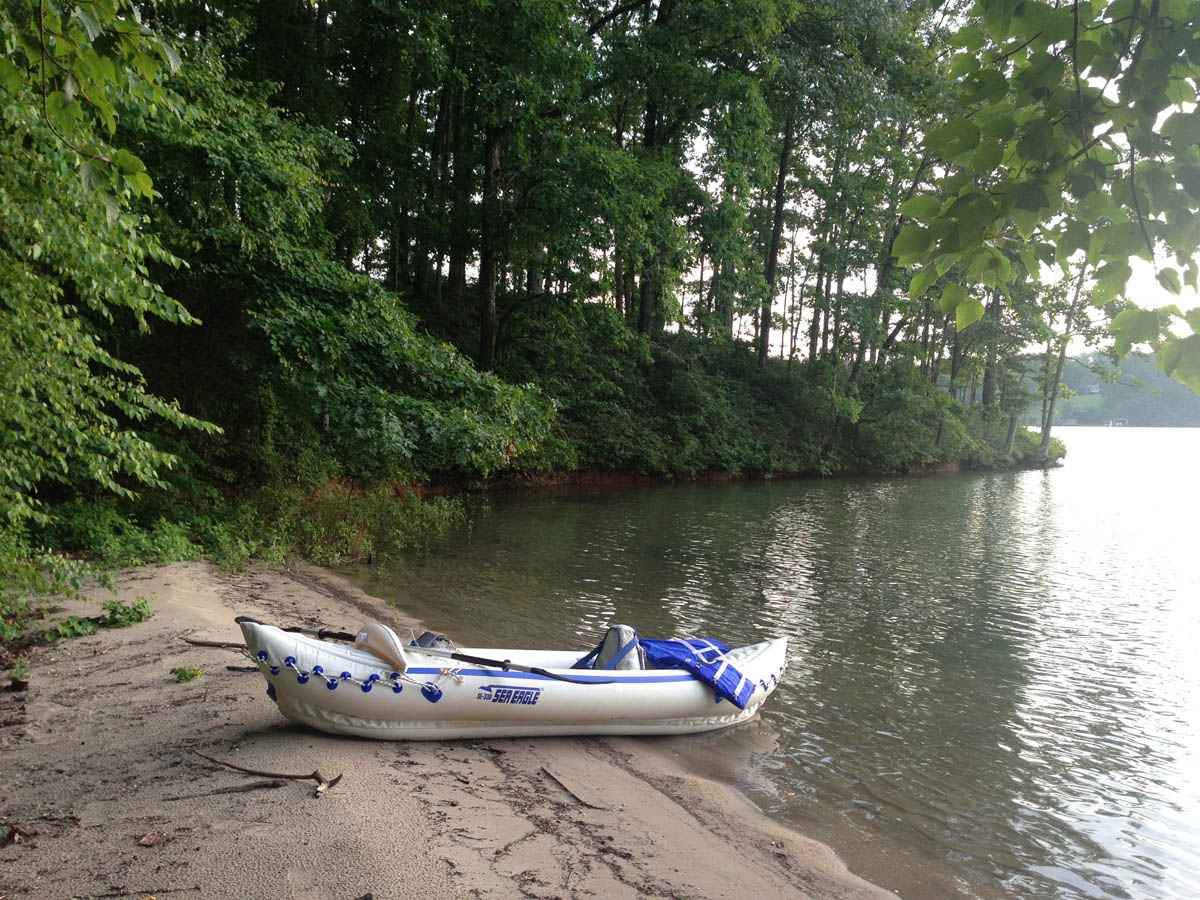 By now, the buzz, roar and whine of the muscle boats and jet skis had been replaced by the syncopated cacophony of chirping, clicks and buzzing of the cicadas.  The “shake and bake” chop on the lake had begun to level out to little more than a hypnotic ripple along the shoreline.

I beached the kayak and slipped into the cool, calm water for a swim just as the setting sun was casting shimmering gold glitter onto the water through the pine trees. It was the most delicious swim I can remember in a really long time.

As I was treading water out in the deep with the deserted cove all to myself, I pondered how little I would need to survive on the island, daydreaming about hauling my kayak into the brush to hide my tracks, fashioning a hammock from the kudzu vines, and wondering what sources for food there were on the island. After all, my response to Tom Hank’s movie Castaway had been “Why would anyone want to leave a perfectly good island?” 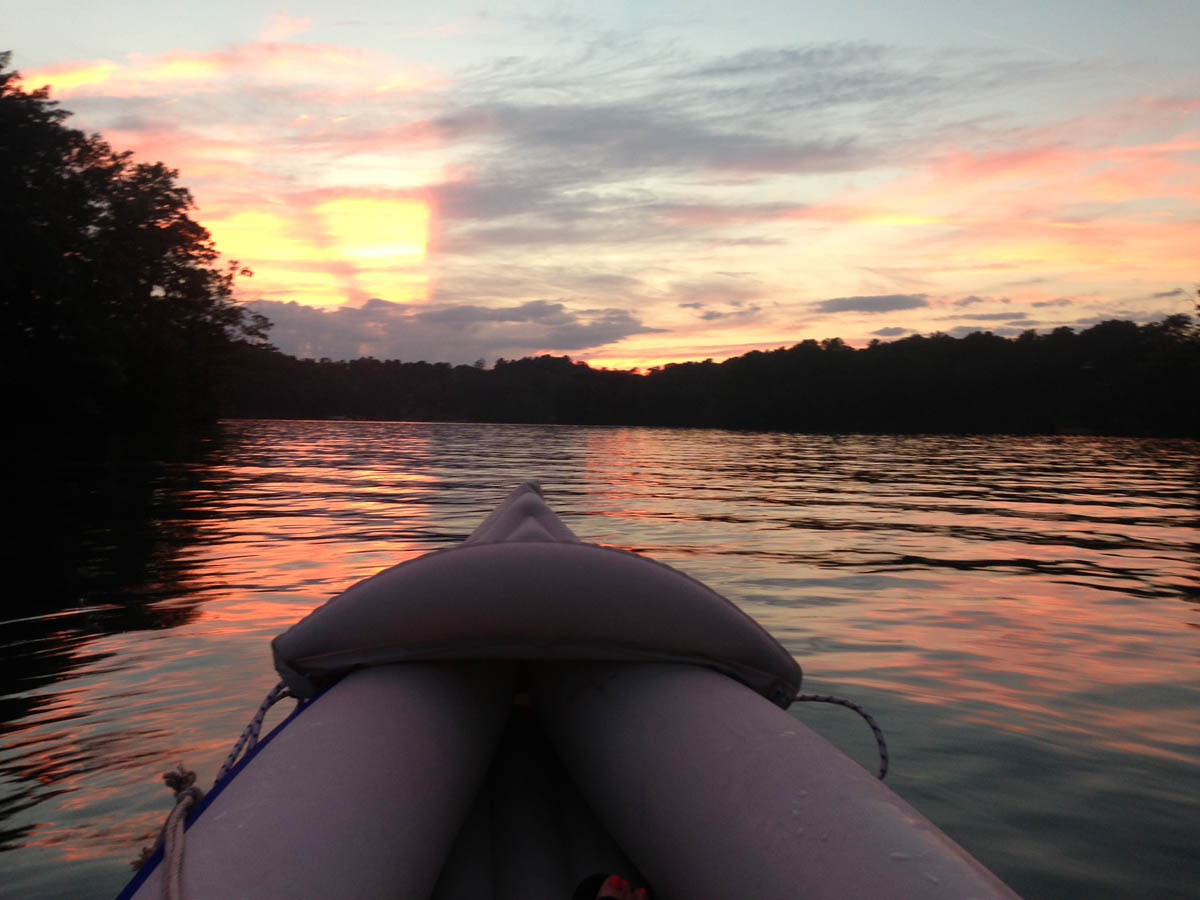 As darkness nudged me back toward the boat ramp, I was already planning my return to the cove the next night, my last night in Shady Grove. Could I possibly be so lucky to repeat the experience?

I packed a dinner picnic with cheeses, pate’ and a bottle of chilled Prosecco, and once again managed to beat the thunderclouds back to the island. But alas, someone else had the same idea. Parked in my idyllic cove was the most massive houseboat I have ever seen, with ceiling fans, a water slide, dual jet skis on back, a huge inboard sleek powerboat as a tender. It was enough to make even me want to leave a perfectly good island!

By the way, does this kayak make my neck look red? 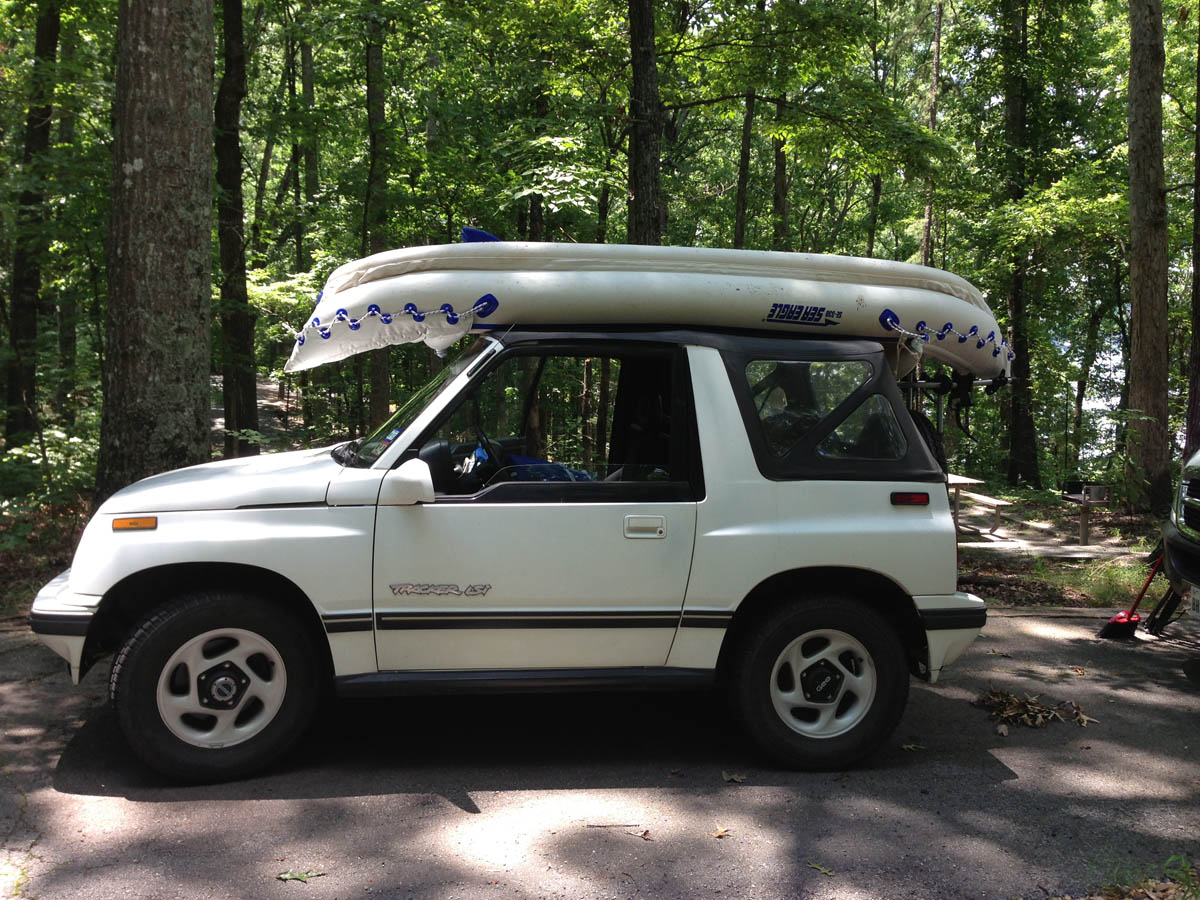 Does this make me a redneck?

What about if I add my inflatable Barcalounger? 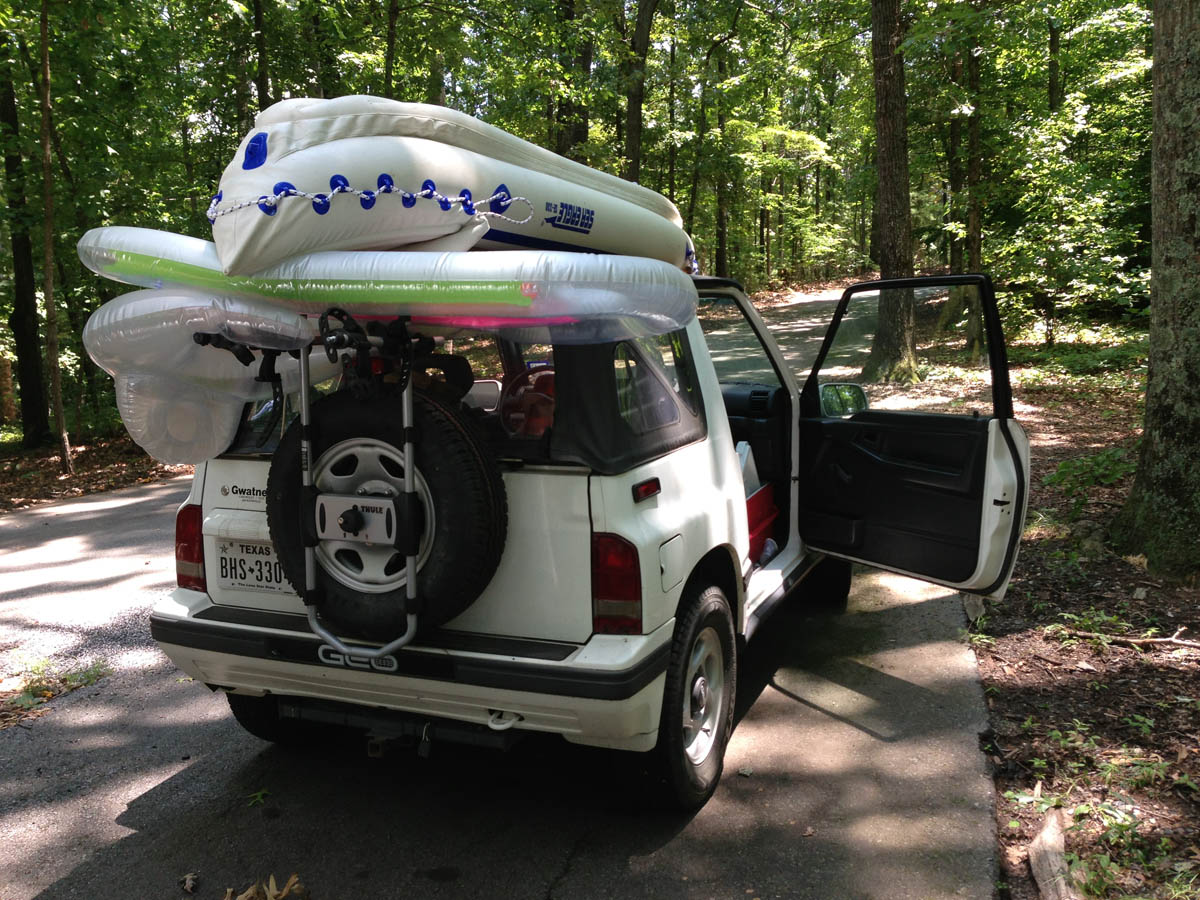 2 thoughts on “My Robinson Crusoe Moment”