I am working off my East Coast Bucket List while I am still employed, because I figure once I am no longer in the Corporate bread line, I will need to be much more frugal. One might argue that if I were much more frugal NOW while still earning a paycheck, I could save enough to splurge once I was living on a fixed income. However, I know myself too well. Regardless of how much I saved, I would still not turn loose of enough money to cover some of these East Coast campground fees!

One such place that has been on the East Coast Bucket List for so many years is the Outer Banks of North Carolina. So I turned the wheels even further eastbound, overcoming the urge to return to the comfortable and familiar Asheville scene. 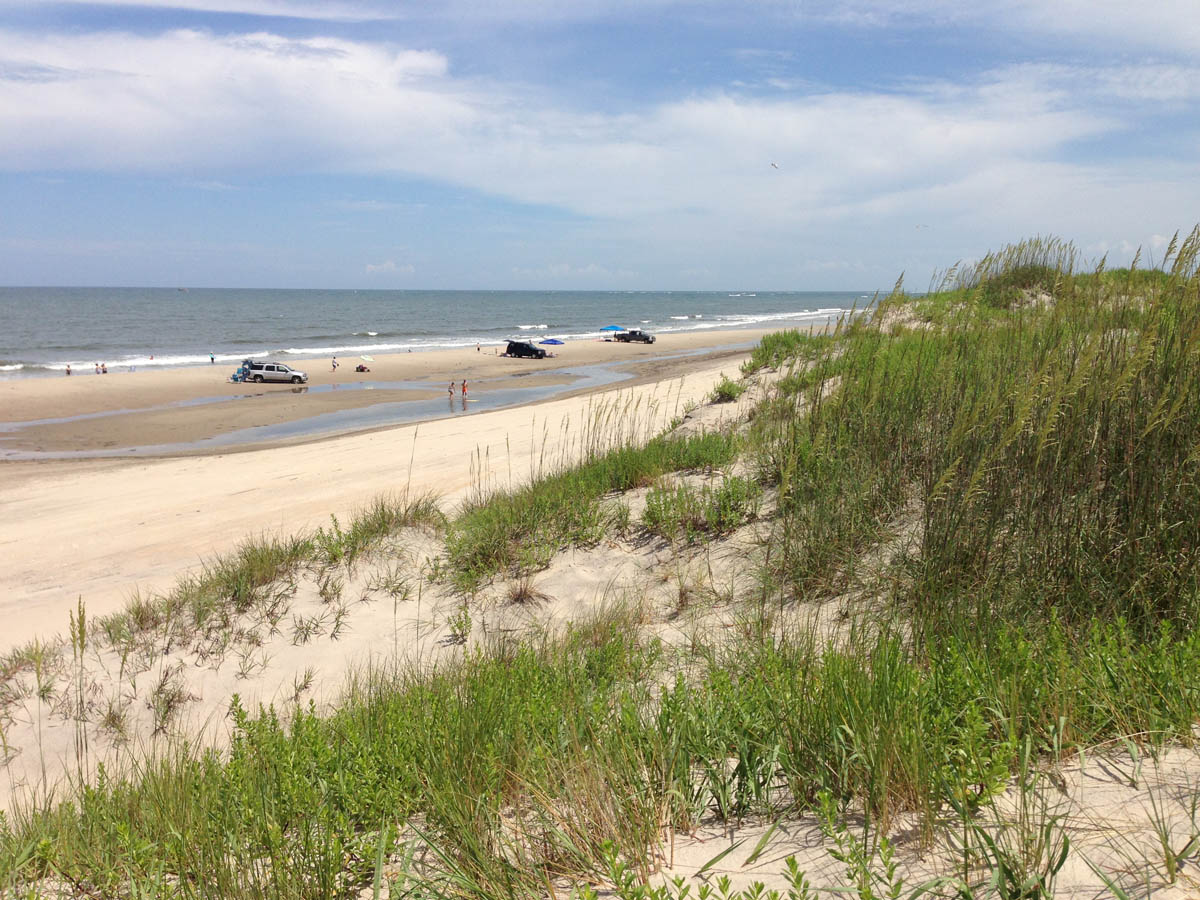 I have loved the state of North Carolina since the first time I visited eight years ago. This one state is a microcosm of everything I love….it has a change of seasons, beautiful mountains covered in national forests linked together by well maintained hiking trails, award winning beaches, and every outdoor activity from snow skiing to SCUBA diving. But I always tended to gravitate toward the mountains when visiting here in spite of the fact that I am really quite the beach nut. 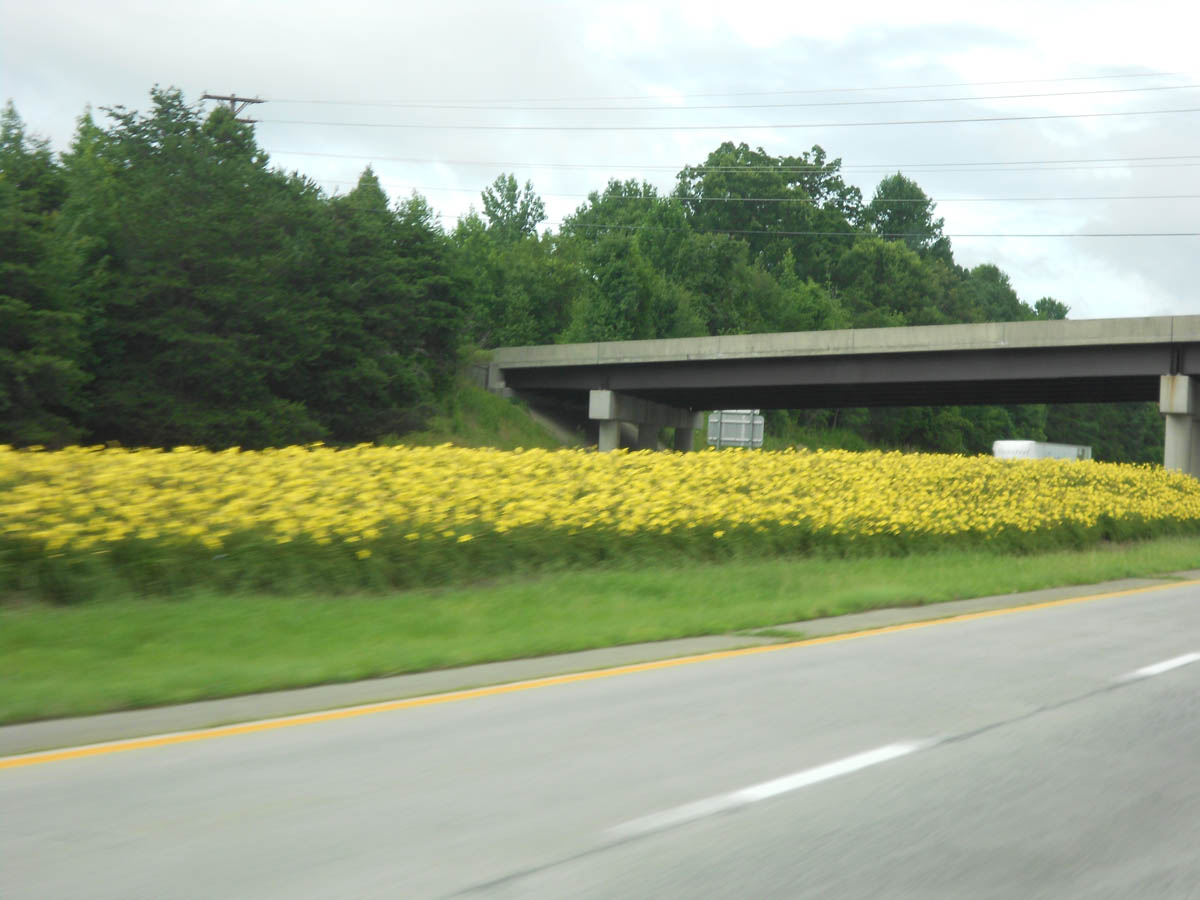 The beautiful flower-strewn highway I-40 took me through the seemingly never ending exits of Greensboro, Durham, and Raleigh spilling over each other until I was relieved to finally be on the other side of “city.” A couple of nights at Camp Wally World, and I was finally starting to feel that warm, moist, heavy air that told me I was nearing the coast.

Having crossed many bridges over rivers in the Winnie did nothing to prepare me for the butt-puckering passage over open water. While most would find a mandatory stop to allow a boat to pass beneath the Intercoastal Waterway to be a bother, for me it was a welcome chance to collect my wits and calm my frayed nerves. 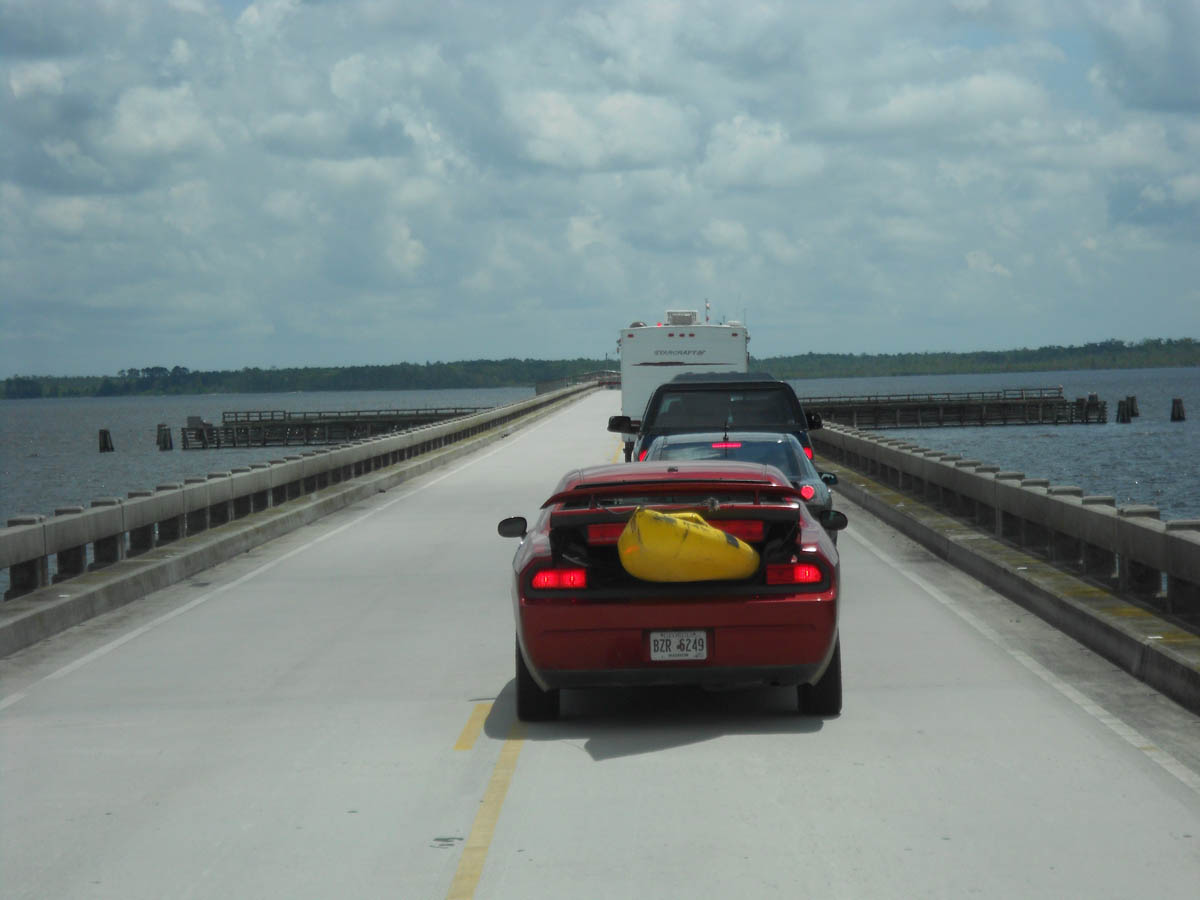 Having arrived a day ahead of schedule, I stopped at Oregon Inlet, one of the NPS campgrounds just down from Kill Devil Hills. I had no idea they would have space, but being a Sunday night, it was near empty. It was pristine, with only “low impact” structures (small wooden bath house with cold water showers) and minimal concrete. Though it had no hookups, it was an idyllic setting with the ocean just a short climb over the dunes, and only $20 per night — my kinda place! 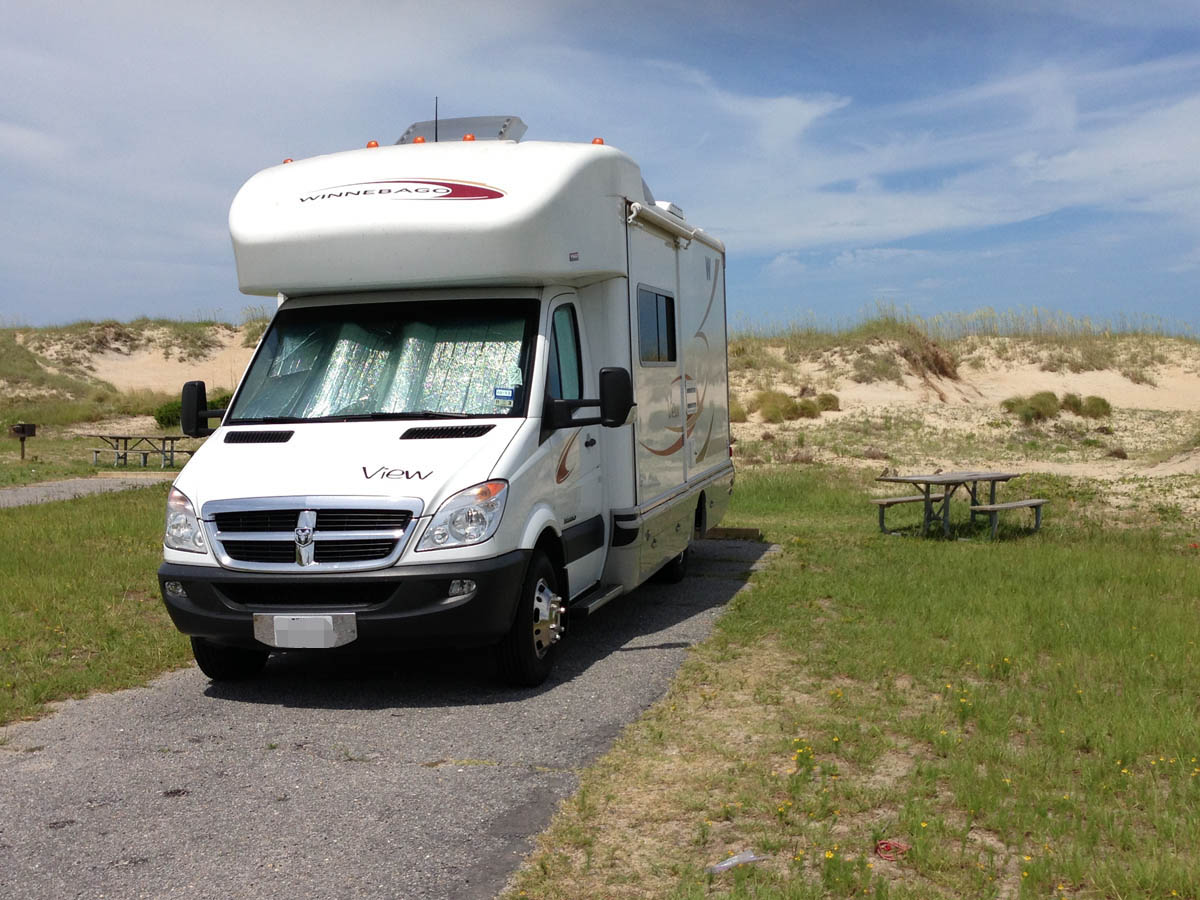 I opened up my windows to the stiff ocean breeze and sound of the waves blowing over the big dunes with a brilliant star-filled sky overhead. I did not want to leave, but had already paid an absurd $57 per night for a reservation down at Frisco Woods in Cape Hatteras, so I had to keep on going south.

Frisco Woods got mixed reviews on most of the websites, but at the crazy cost of $57 per night, it was rated “worth it” for the location. Not that I plan to ever get caught in a KOA, mind you, but it was even worse at $87 per night! 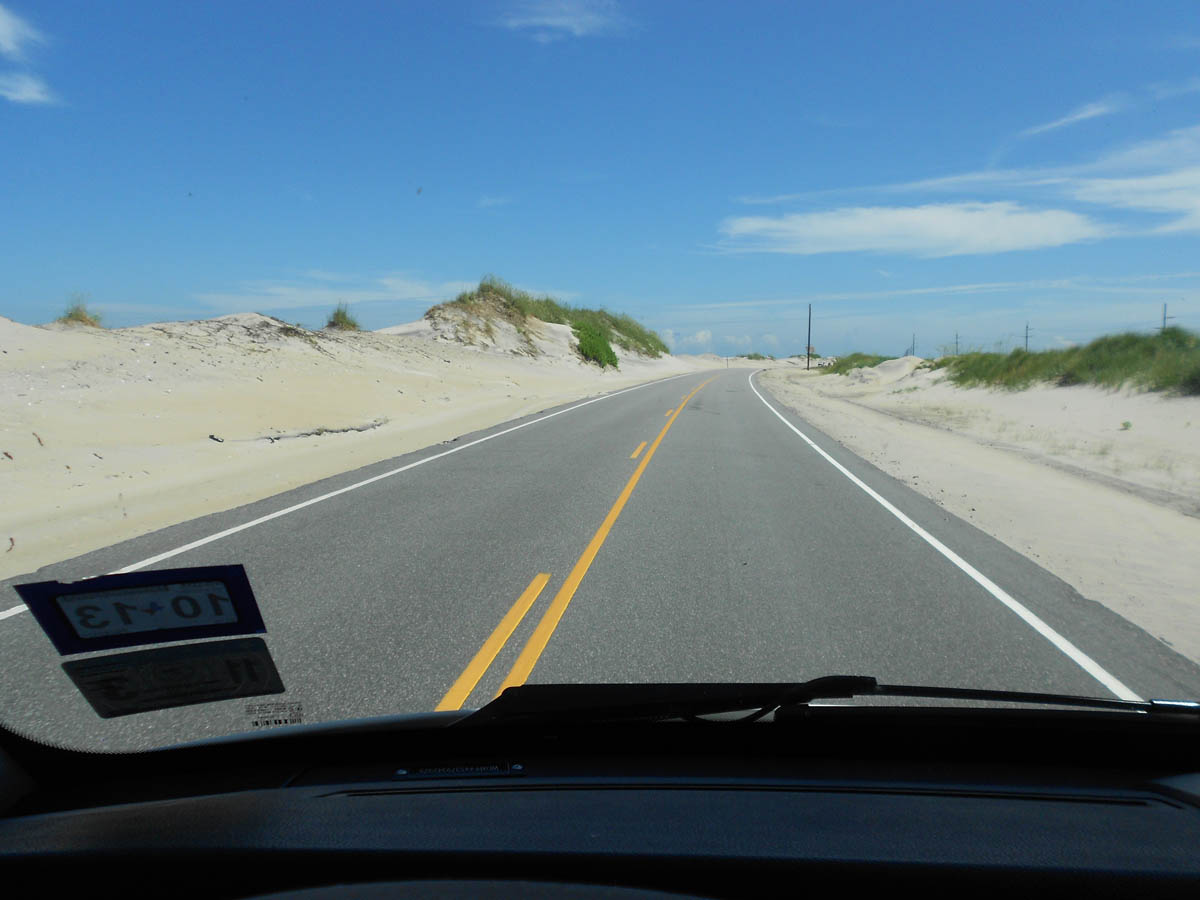 It was the most bizarre campground I have ever seen before. …nothing more than a bunch of electric boxes placed in a field of grass willy-nilly along some dirt paths with no order to it at all. They had me booked in a site with my back window facing Route 12, the major highway that runs the length of the Outer Banks. It was so noisy that I asked to move, but they kept sending me out to look at sites that were either already occupied, or no way would my rig fit through narrow openings in between crowed gnarled trees under low hanging branches barely open enough to accommodate the Tracker. Both women at the front desk were new, and they didn’t seem to know much about the sites, as they kept sending me off to look at spaces barely big enough for a pop-up, let alone a 12 ft high rig! 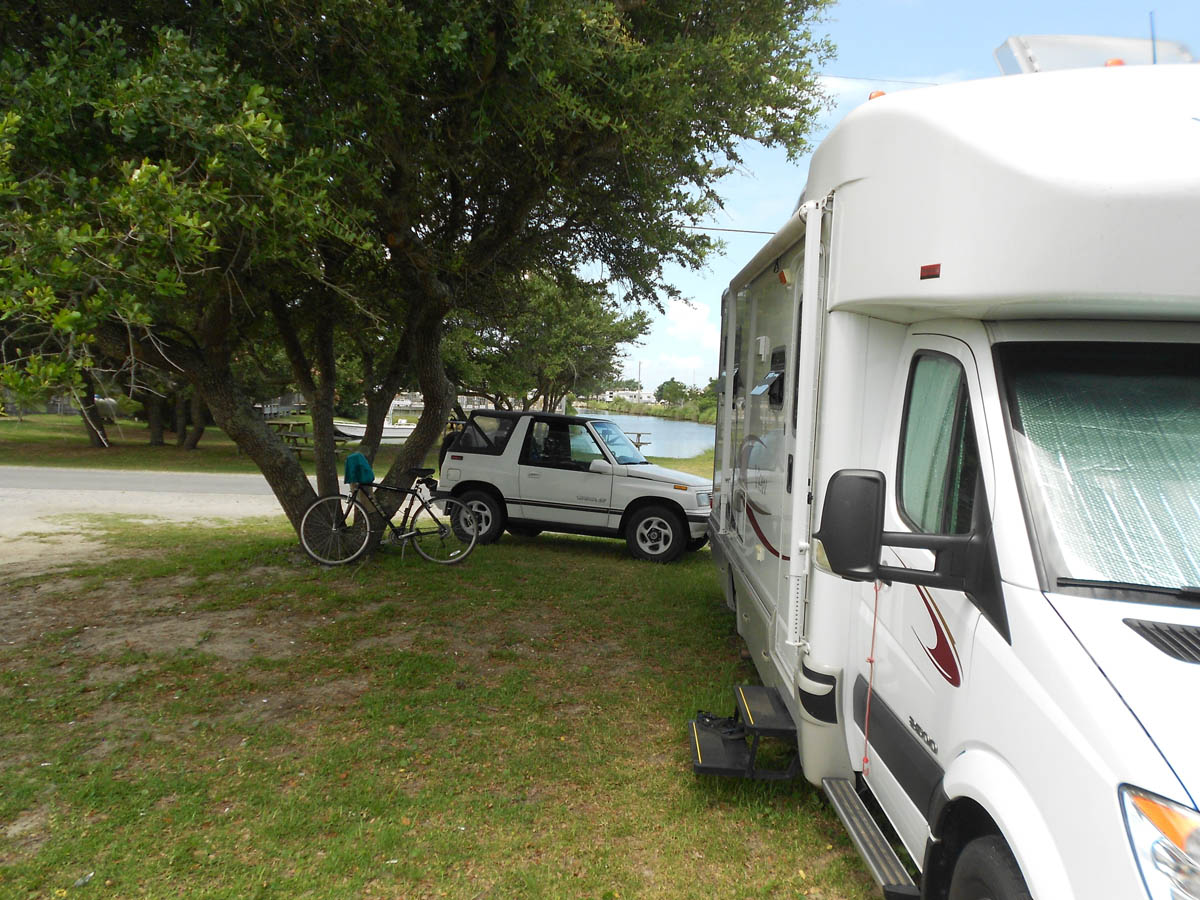 Finally after switching campsites three times, I found a spot in an open grassy field with a couple of stray tree limbs for shade. I had hoped to have enough breeze to sleep with the windows open like I did in the National Seashore campground, but about the time I settled down to rest, along came the flashing yellow light of the mosquito spray truck, spraying poison along the road. So there I was boxed in, all for the need for a few bars of Verizon. 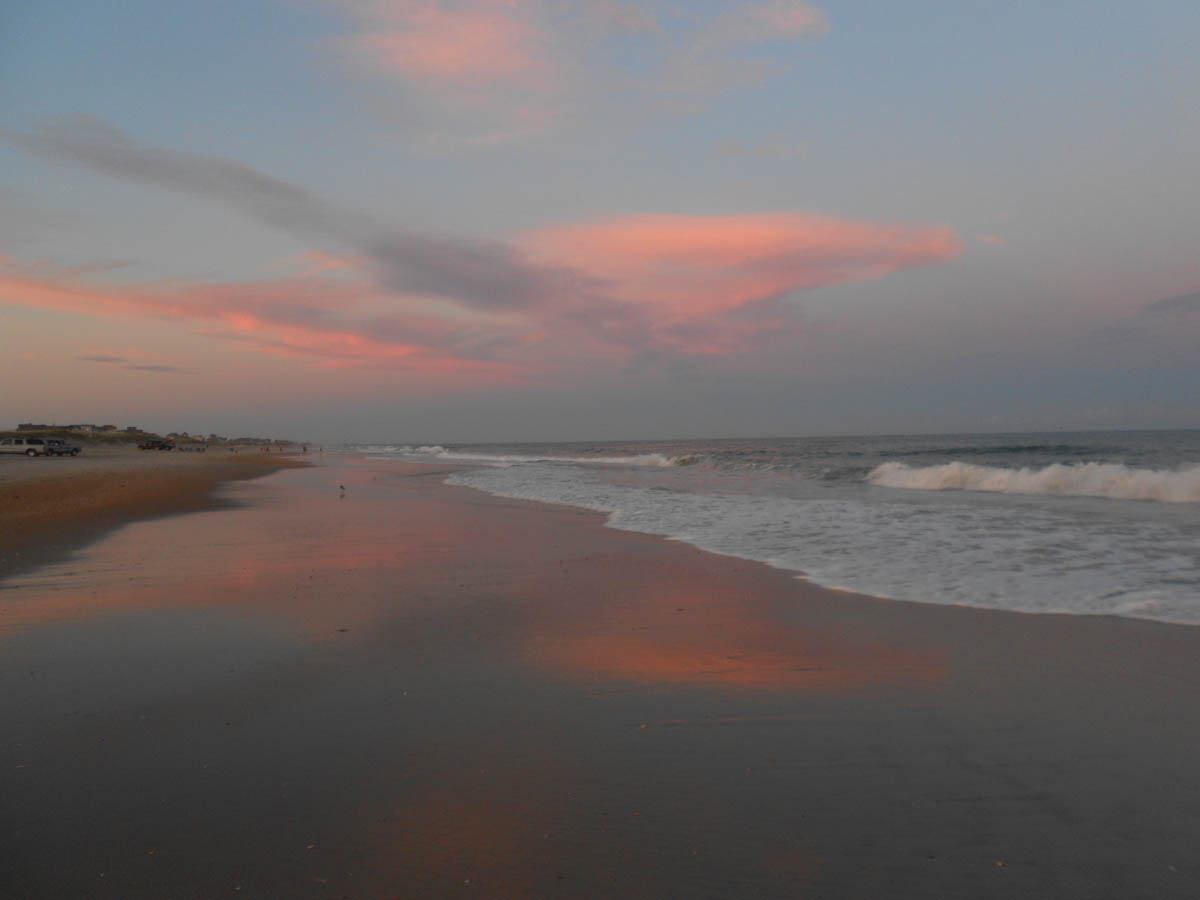 I readily admit I am working in an amazing location. I am one lucky worker bee! But I ask you, which is the better scenario? Paying $57 per night so I can earn a paycheck working inside an air conditioned box? Or paying $20 a night out of my retirement fund to be down at the NPS campground in the dunes where I really want to be?

A paradox for sure… 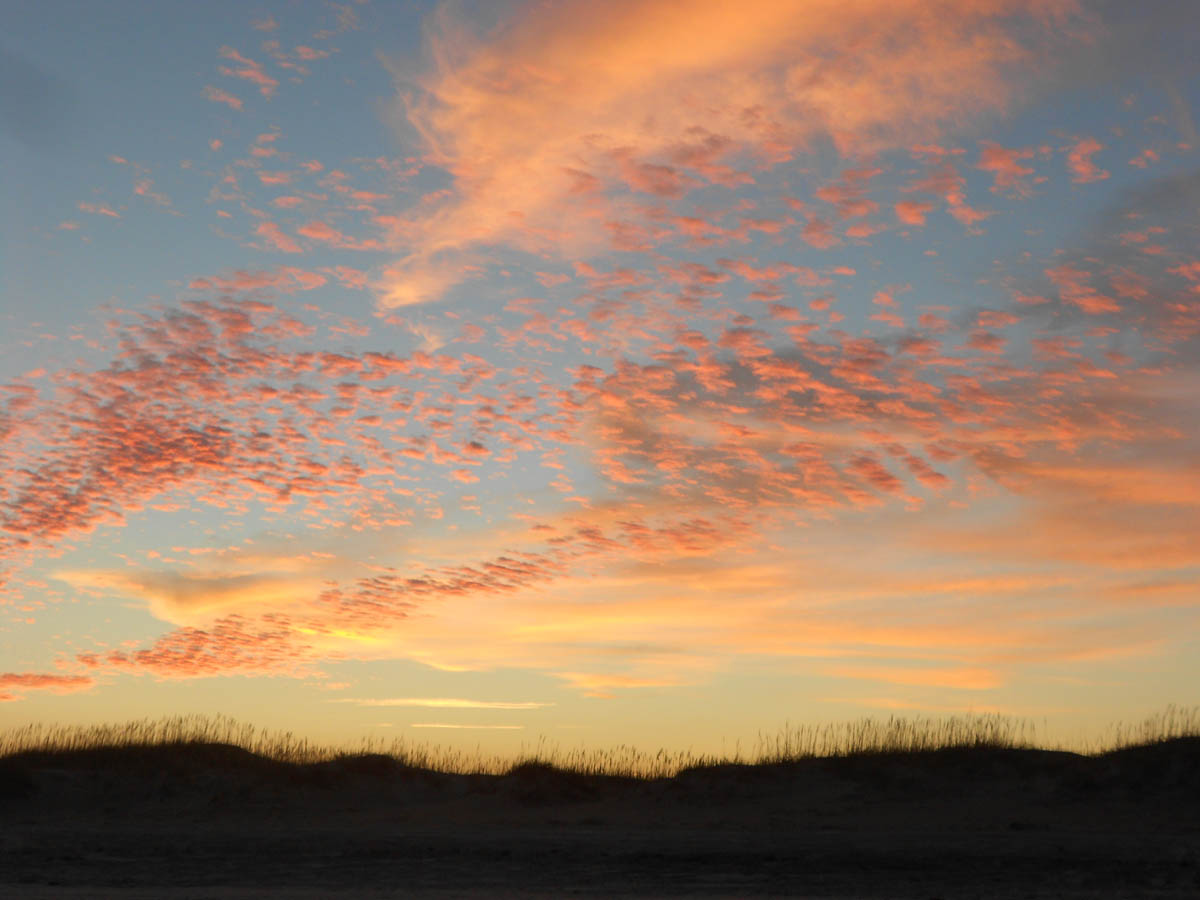