I looked at the map for my halfway point between the Outer Banks and my next destination, Chincoteague, VA. Right smack-dab in the middle was the Great Dismal Swamp. PERFECT! Who could resist a place with such a name? 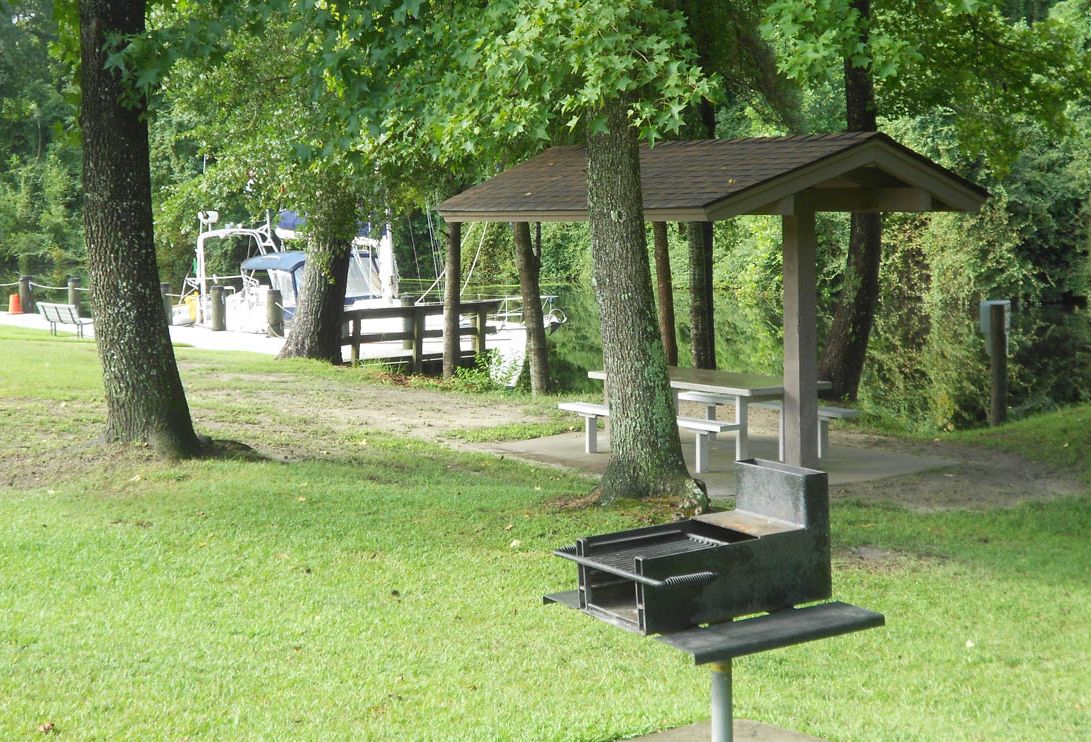 Notice anything different about this roadside park? Yep, there’s a boat in it!

The Great Dismal Swamp lies on the border between North Carolina and Virginia, a wildlife refuge of over 112,000 acres circling Lake Drummond.  But the most significant feature is the 22-mile Dismal Swamp Canal, dug by slaves between 1793 and 1805.  But justice prevailed in the end as the swamp became a refuge of a different sort, one of the largest way-stations along the Underground Railroad. 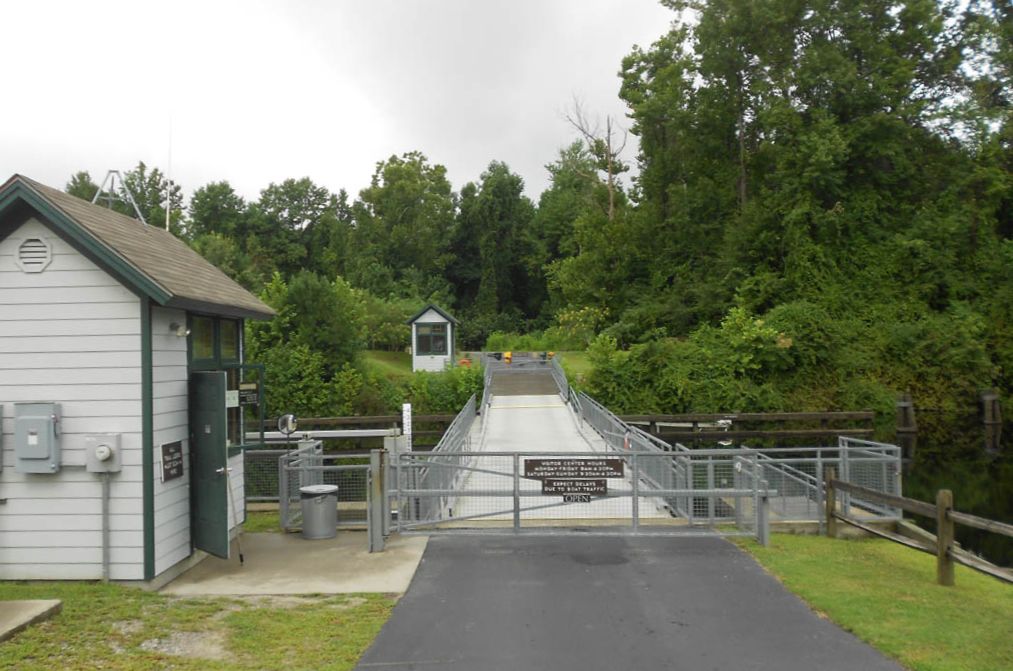 There is no camping at the Dismal Swamp State Park, but there is a Camp Wally World just 15 miles south. It was a nice drive in through lots of small towns with thriving farmland. Because of my 9-5 work schedule, I don’t often have the luxury of time to meander, so it was a welcomed route off the main freeway for a change. 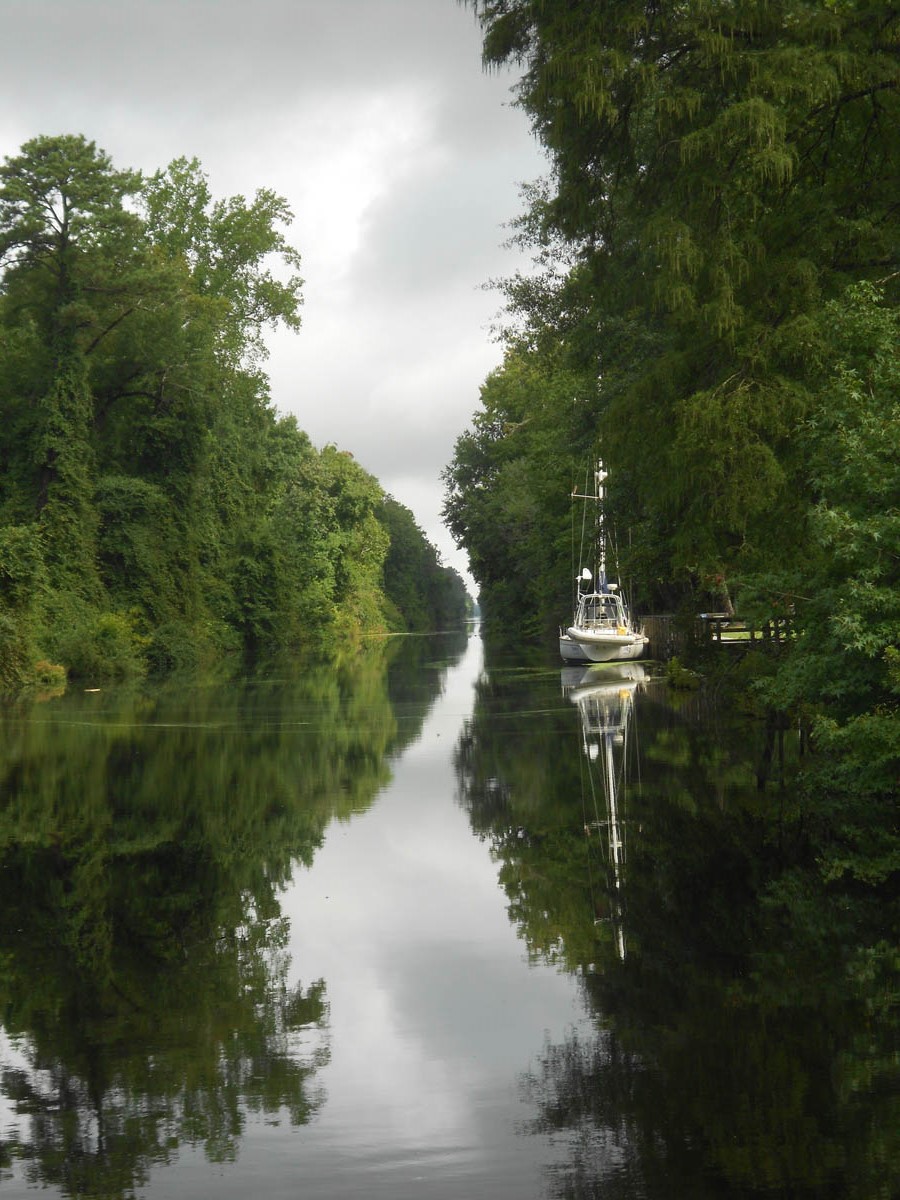 The Great Dismal Swamp Canal is an inland route off the Intracoastal Waterway.

I originally planned my stop at Dismal Swamp State Park to ride some of the 22 miles of bike trails as a break along my repositioning route. But I was stopped before I ever crossed the bridge by a kind Park Ranger with 3 cans of “Cutter” sitting on the counter, warning of heavy infestation of seed ticks in the area due to all the rain. “Like I’ve never seen ‘em,” he enthusiastically growled. So I took his offer of the Cutter and thought, “No problem, I will just spray myself up.” 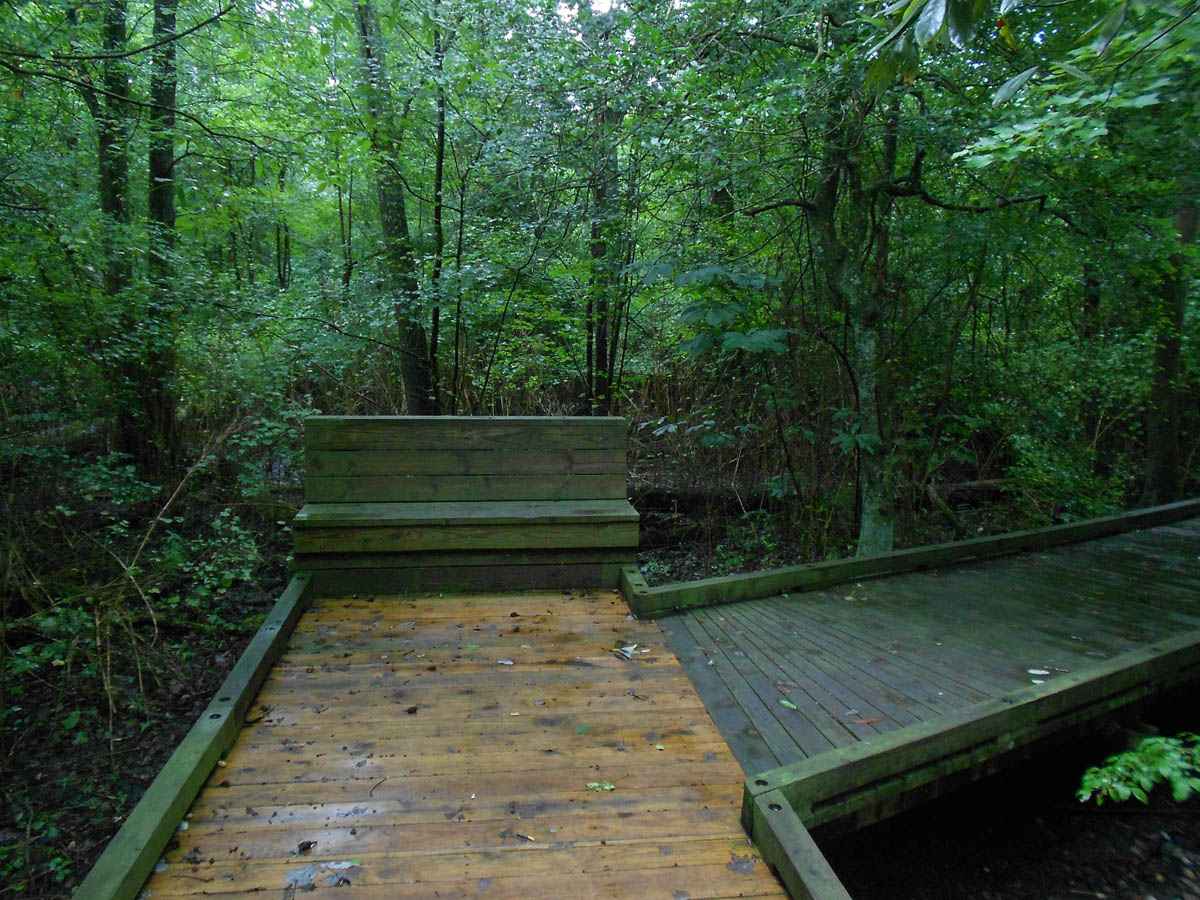 Another 3 feet, and there is a warning bulletin posted in guard station, along with a sign hanging on the fence. Inside the Visitor’s Center, a second Park Ranger warns, “These are ticks on a whole new level. I promise you, you will come out covered in them.” Then a third sign. Finally, the “Creature Feature” of the month on the display board is on…..you guessed it….TICKS! 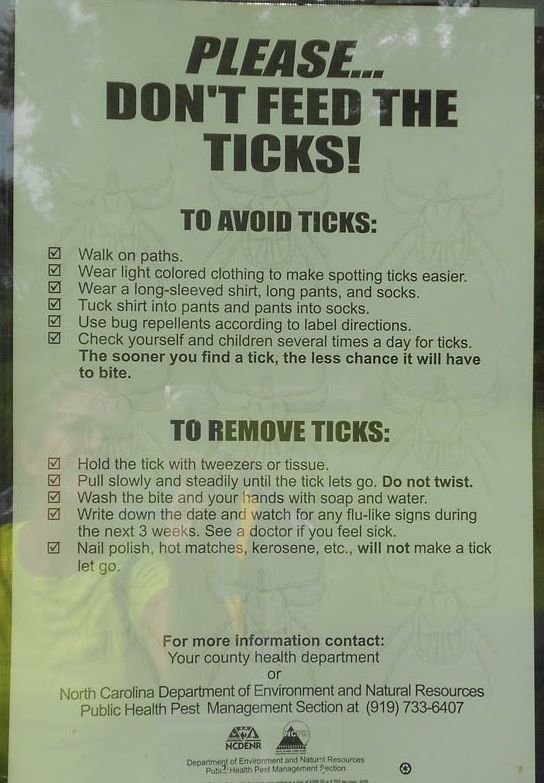 A different level of “wildlife”

This made me think of the Rip Current warning posters that I saw in every NPS facility, and preceded every Ranger talk during my 5 weeks in the Outer Banks until I was too fearful to swim anywhere but the lifeguarded beach. And I know how to swim. I am not usually one to give into fears, but after a certain point, it is tough not to get psyched out by all the warnings. One has to wonder if the situation is that dire, or if we have just turned into such a “cover your ass” society that everything must come with multiple warning labels now?

By the time I went through two ranger warnings, three signs, and an interactive poster, I had lost the desire to roll freely through the swamp on my bike. The thought of trying to outrun “jumping ticks” was a real buzz-kill. I had the Lyme once, and am not interested in repeating it, ergo the cliché, “Once bitten, twice shy.” But I started to wonder, “What would be my tipping point between risk versus reward?” I was willing to forgo a bike ride in the swamp, but what if it offered a much more enriching experience?

I still remember the times when I took the “safe route.” Like not jumping off the back of the feluca in Egypt to swim in the Nile River with my friends for fear of Bilharzia infestation, a gross but very treatable parasitic worm. Or the time when I bailed out of the 6 hour hike to the Boiling Lake in Dominica because of so many online posts from the hot shot adventure seekers boasting “I made it, but you probably can’t.” Or the time I turned back 600 feet from the summit of Kilimanjaro because my shaking legs and blinding headache at 19K feet aroused the overwhelming fear of ensuing altitude sickness? Always a question whether to heed the warnings or “press on” in pursuit of the experience. Yes, “Life is about the journey, not the destination,” but destinations unseen can really haunt a wanderer. Seems the older I get, the more warnings I heed, but not without a rising level of resentment, a scale I often wish I could tip toward risk. The Aussies have a saying, “You can’t live your life wrapped in cotton wool.” Cotton wool?  Isn’t that the stuff from which bandages are made? 😉

Forgoing only a few miles in the swamp this time, I decided to get back into the Winnie and move on to fear of a different sort. The Chesapeake Bay Bridge Tunnel, or “CBBT” as it is affectionately known by the locals. The span of three bridges and two underwater tunnels over 17 miles, billed as “the largest bridge-tunnel complex in the world” had my knees knocking. I had never before been asked to pull over and shut off my propane valve…this must be some serious tunneling. 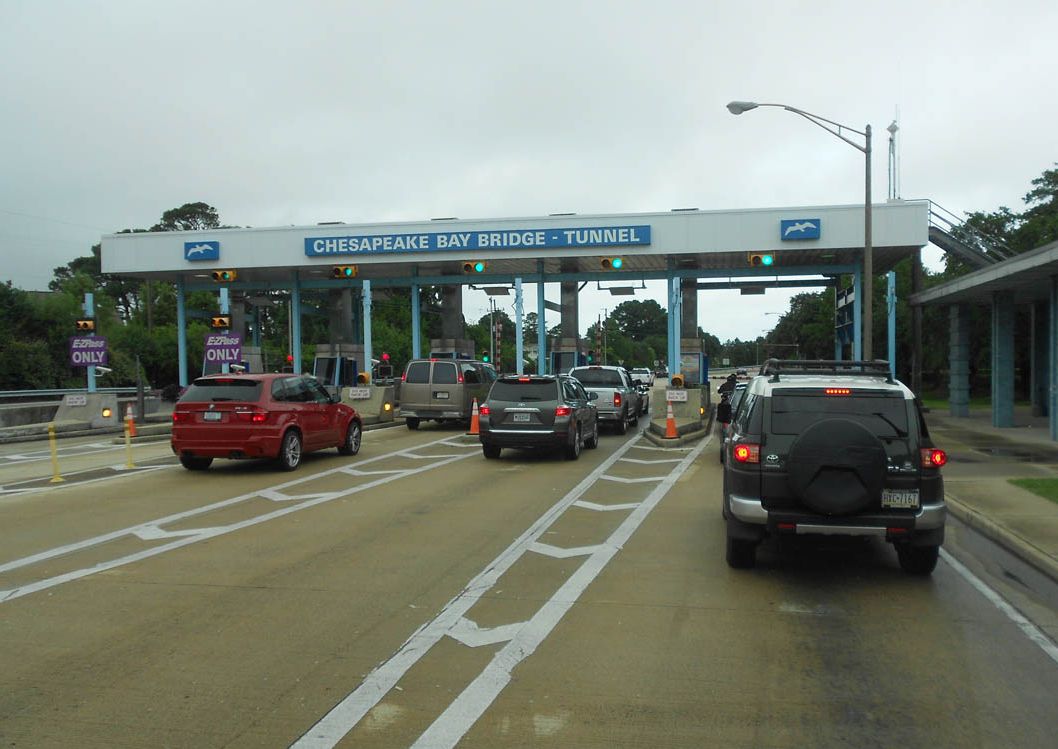 They even have a downloadable mp3 file offering a guided narrative as you cross the bridge-tunnel complex.  And if your particular fear happens to be bridges and tunnels?  Well, they even have a volunteer program where people will drive you across for free. 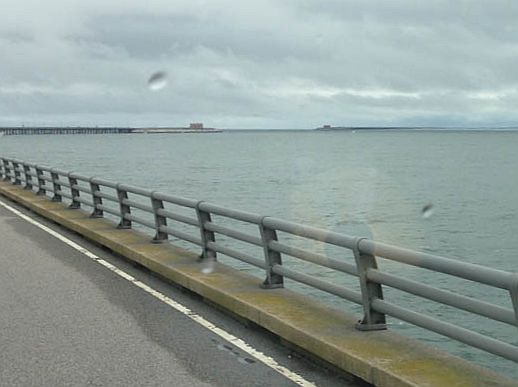 In the distance, you can see where the bridge “disappears” into the tunnel.

The CBBT is comprised of “12 miles of low-level trestle, 2 one-mile-long tunnels, 2 bridges, 2 miles of causeway, 4 manmade islands and 5-1/2 miles of approach roads.” It only took 42 months to build the northbound lane, and 46 months for southbound. But the even more impressive statistic?  It cost me a whopping twenty-eight bucks to bring my 10 wheels across! 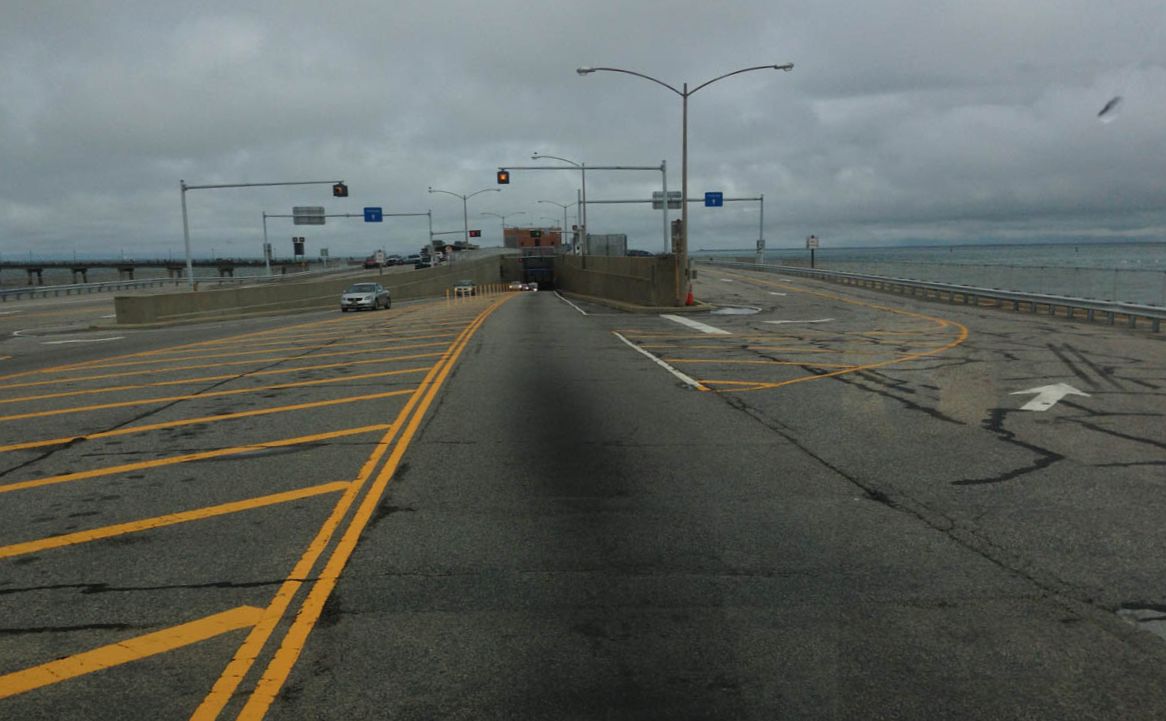 See that right turn lane in the photo above? That was to “One Island,” one of the four manmade islands that buffer the two one-mile sections of tunnel under the shipping lanes. It contains a restaurant, fishing pier, and scenic overlook offering “the perfect vantage point to photograph the bridge-tunnel.” It is billed as “The one stop you don’t want to miss!” Yep. You guessed it. I missed it. All while trying to grab a photo of the tunnel entrance. 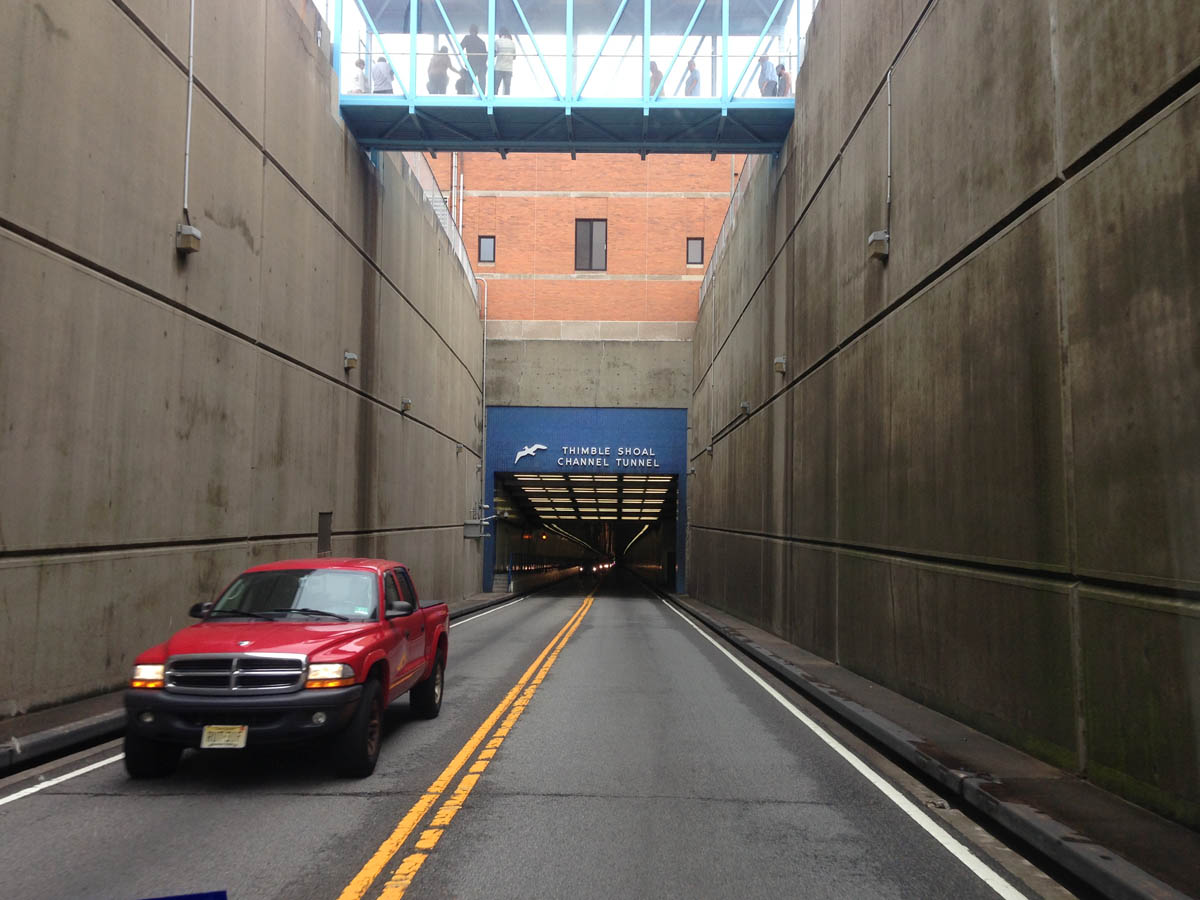 Well, hey, at least I can’t be accused of giving in to warnings saying “Avoid hand-held devices while driving five ton vehicles and a ‘toad’ through a hole in the ocean.” 😉

8 thoughts on “Fear in the Dismal Swamp”