I am in New York on the anniversary of 9/11. I didn’t plan it that way. In fact, last year, I tried very hard to put it out of my mind altogether and not wallow in the sorrow. “Time to move on,” I proclaimed. So when I planned on making it to New York by September, it was for the sailing. The anniversary never once entered my mind.

Still, even given my close proximity this year, I planned not to participate in the ceremonious recreation of the events from That Day. But when I came bouncing out of my RV headed for dinner last night, there it was right in my back yard view….the warm-up for the “Tribute in Light.” 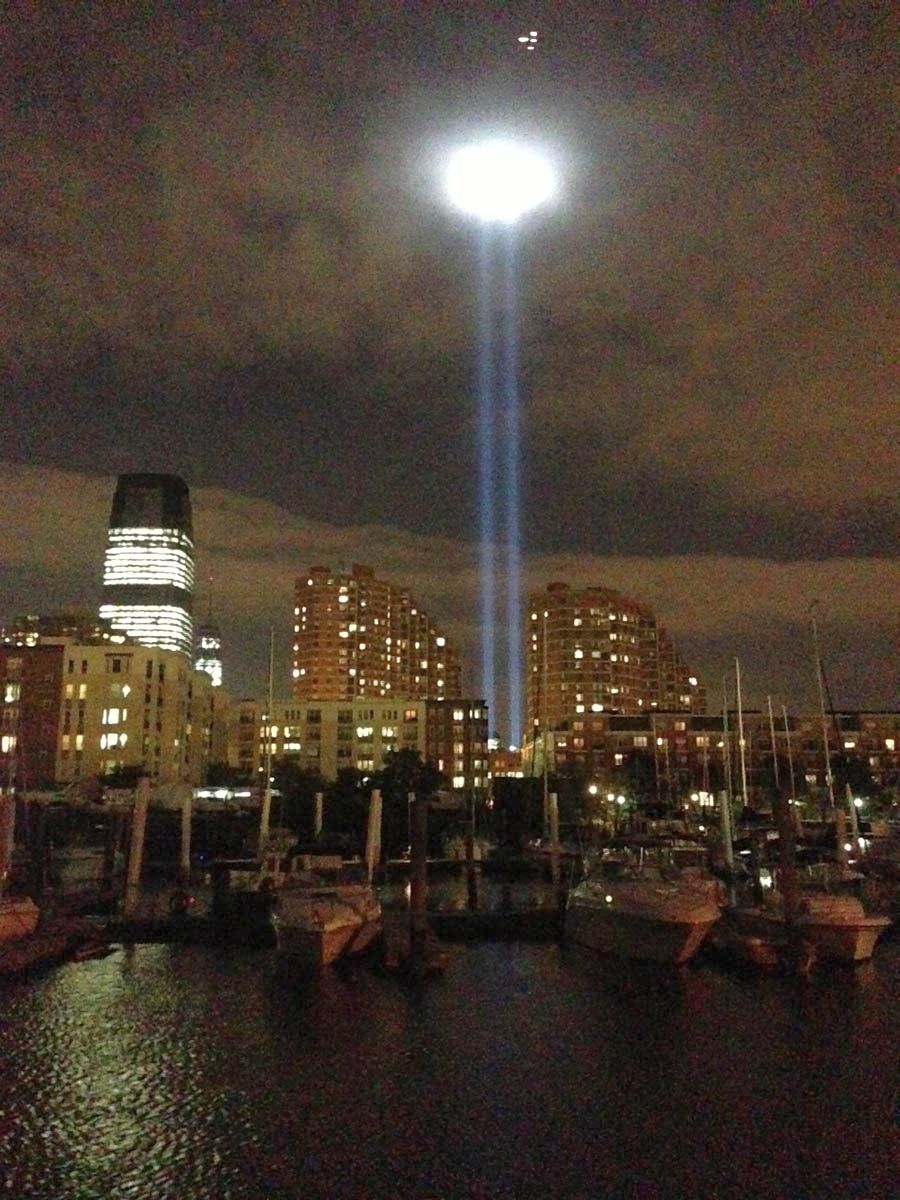 I have not been back to my “old haunts” in Jersey City for twelve years now. More has changed than not. There is a Light Rail train here now. Sideways glances over my shoulder are now to check out the sidewalk cafes, not to be certain no one is following me down my dimly lit street. There was a big art show at my old PATH train stop this past weekend. When I lived here back in 2001, the only “art” was the graffiti covering the walls of the train station entrance. 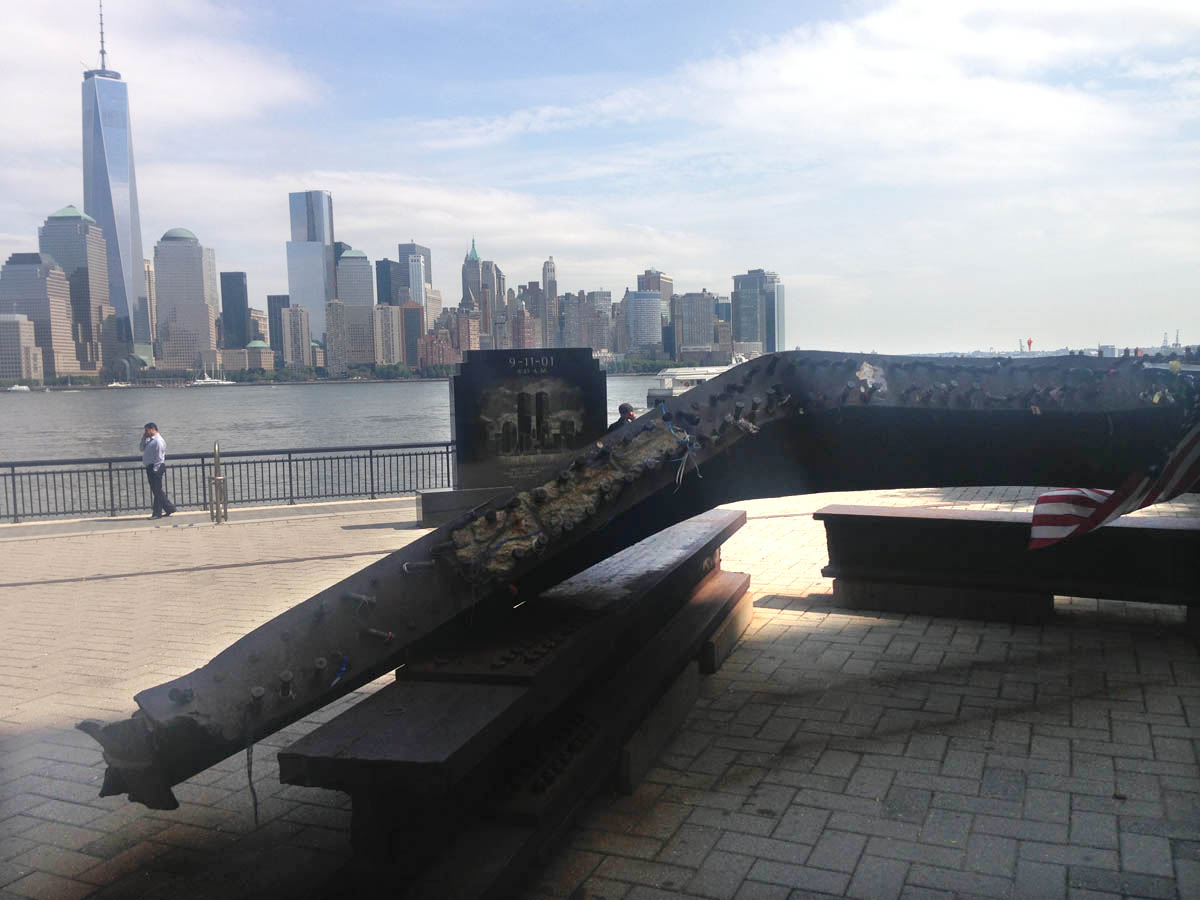 I tried to find the empty field of grass where I stood that morning, late for work as usual. That park where I rode my bike down to the river, hair still wet from my shower as I was getting dressed for work when my Mom called; “Thank God you are there! Turn on your TV!” That park where I stood having a life-altering conversation with a total stranger as the buildings collapsed. That park is now occupied by the Goldman Sachs tower. There is a Hyatt next door. The Colgate Clock where I stood that day watching the buildings “pancake” down into gray, gummy dust has been removed. It is getting a spiffy new LED facelift. 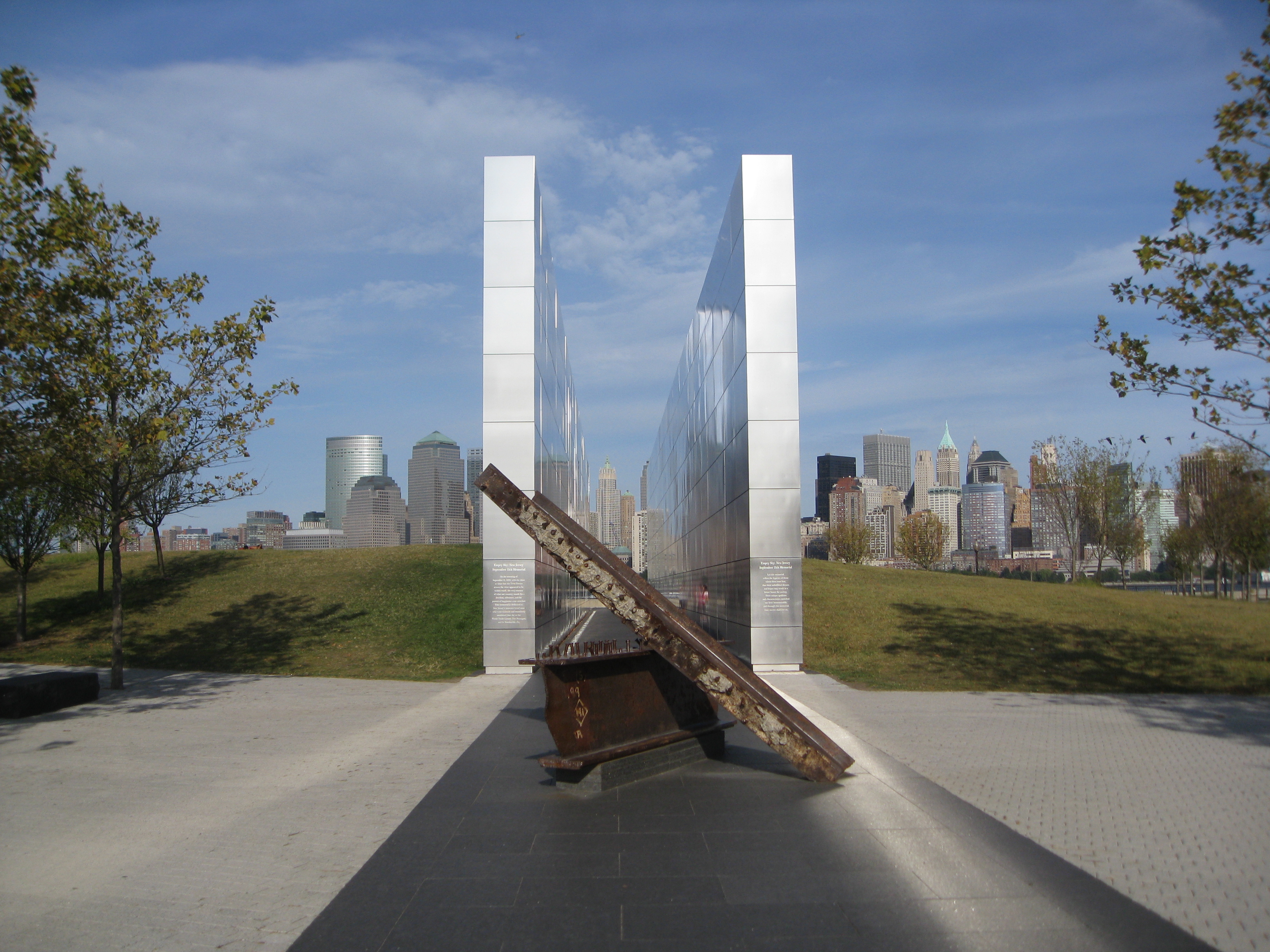 So what I was once determined to forget, I realize now is simply not possible, any more than we can forget the beaches of Normandy, or the Hawaiian waterfront of Pearl Harbor. The event is etched with indelible ink into the script that is New York. There is no escaping it. Every niche affected that day has its own memorial. 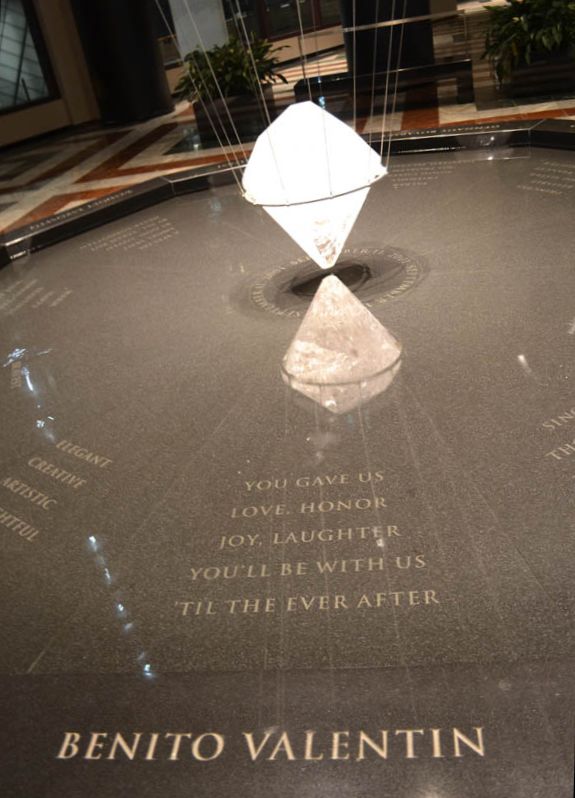 But although we can’t forget, being in New York this week has made me realize that maybe people really have moved on. Maybe I am the only one who looks back with morose and morbid reflections of that day with a knot of fear in my stomach and sadness in my throat. Being here in New York this week, I realize just how much the memorial to our countries greatest tragedy has now become our greatest, most heavily marketed tourist attraction. 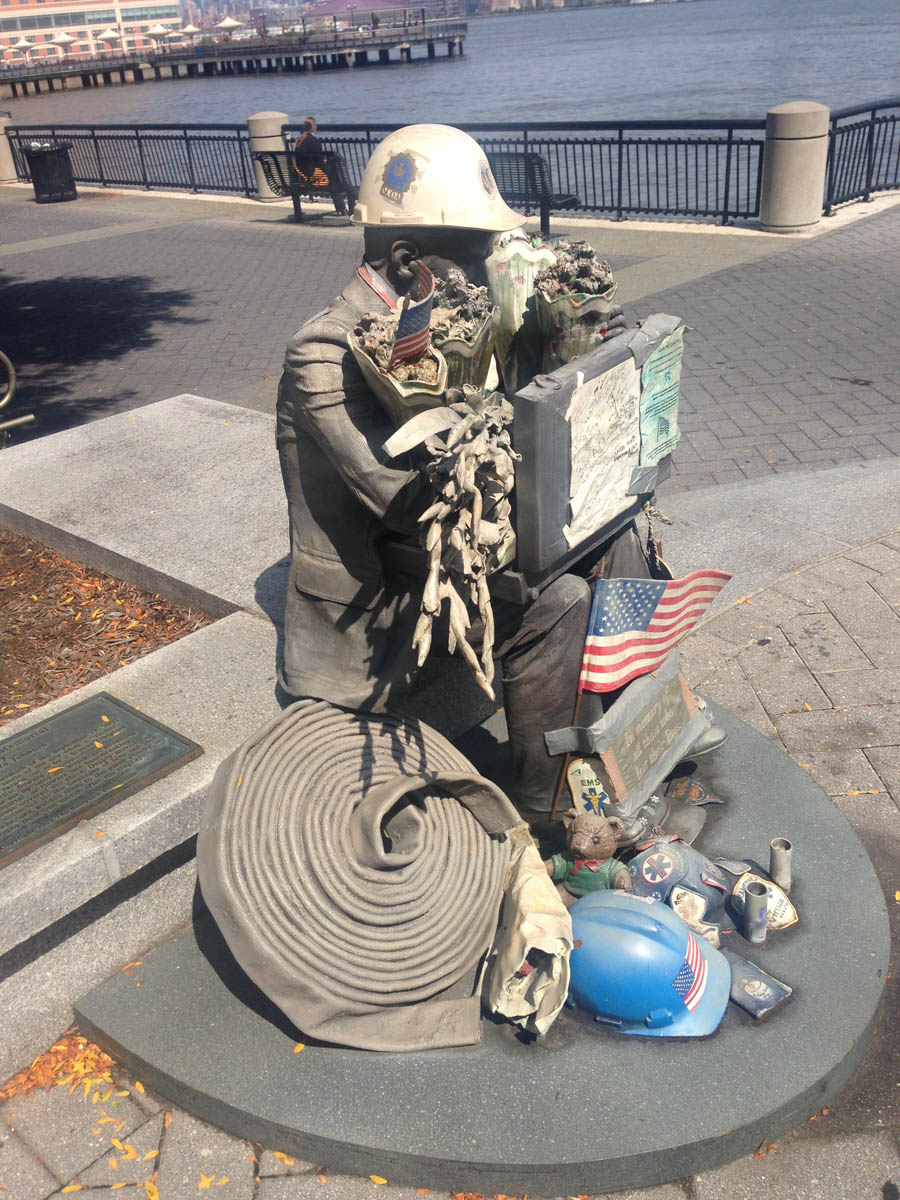 I passed “Double Check” bronze man on my way to work every day. He is now a makeshift memorial. 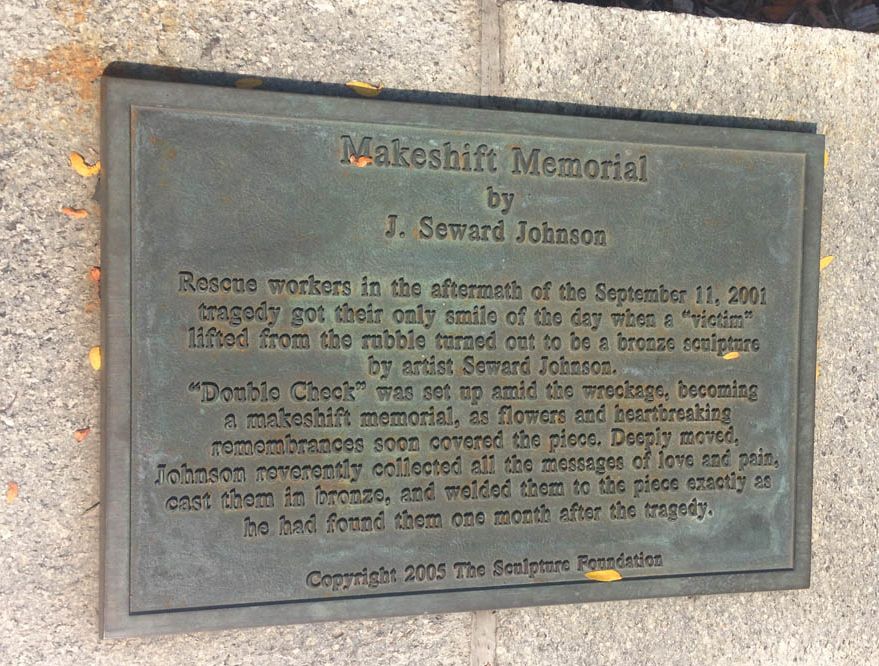 The throngs of foreign-speaking tourists surrounding the memorials are smiling, mugging and posing in front of the chain link fence for their “selfies” on their smart phones. There are giant billboards advertizing a “peek” at the opening of the memorial. Long lines and “Advance Reservations Required” with assigned time passes to preview the memorial and get a glimpse into the lives of those lost in the tragic event. You can text the word “Hope” if you wish to make a $10 donation. And of course, “There is an app for that!” which includes a “memorial cobblestone locator.” I can’t help but think this must feel somewhat exploitive to the loved ones of those lost on that fateful day. It does to me, and all I lost was my job and my dry cleaners… 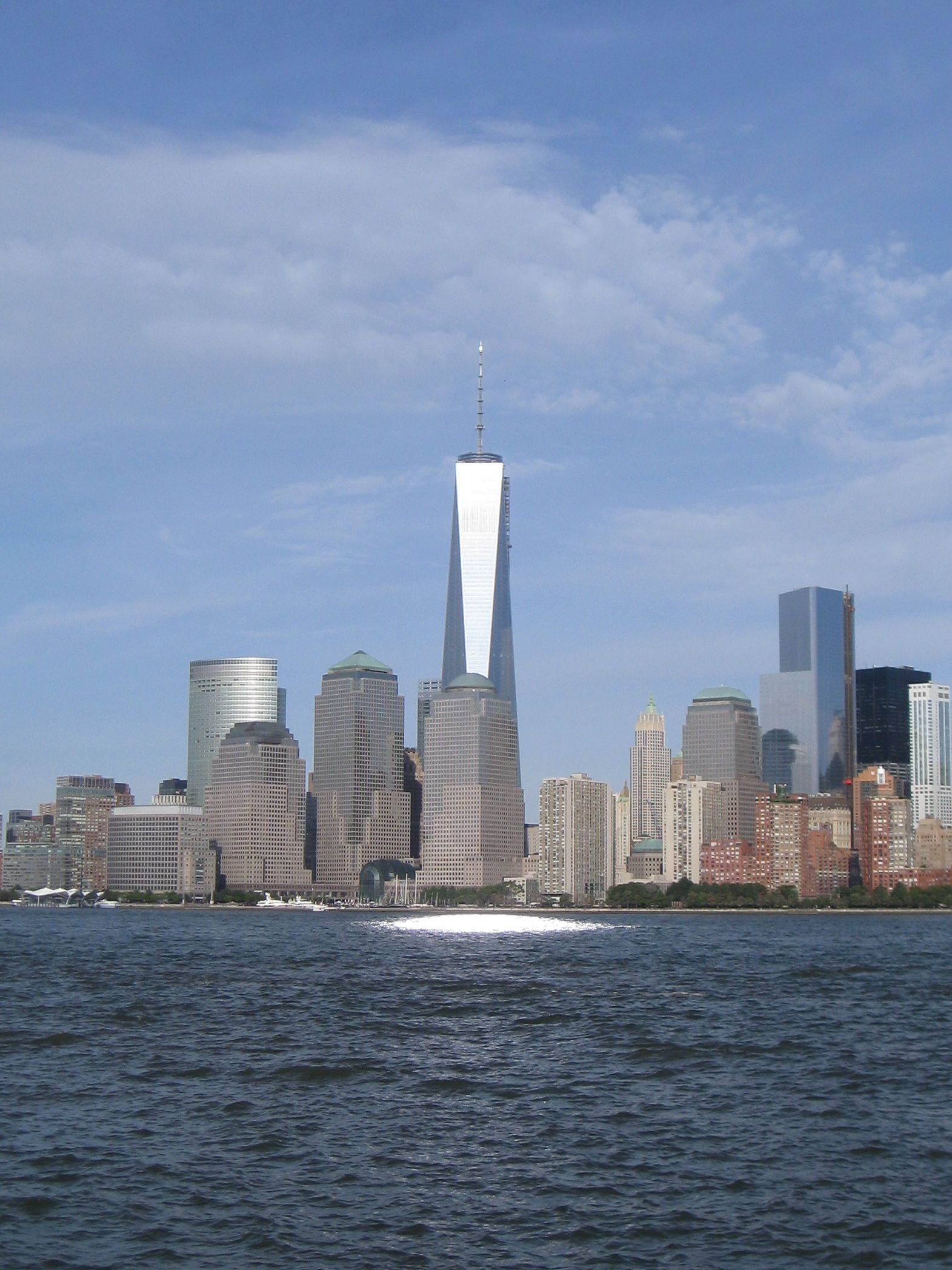 Somehow viewing the event as a “tee-shirt opportunity” helps me separate from the pain of my own indelible ink from that day. The sight of my daily commute now a smoldering pile of rubble, the smell of burning wires, the sound of fighter jets overhead, the uncertainty of “what’s next?” Who knew there was an app for that? 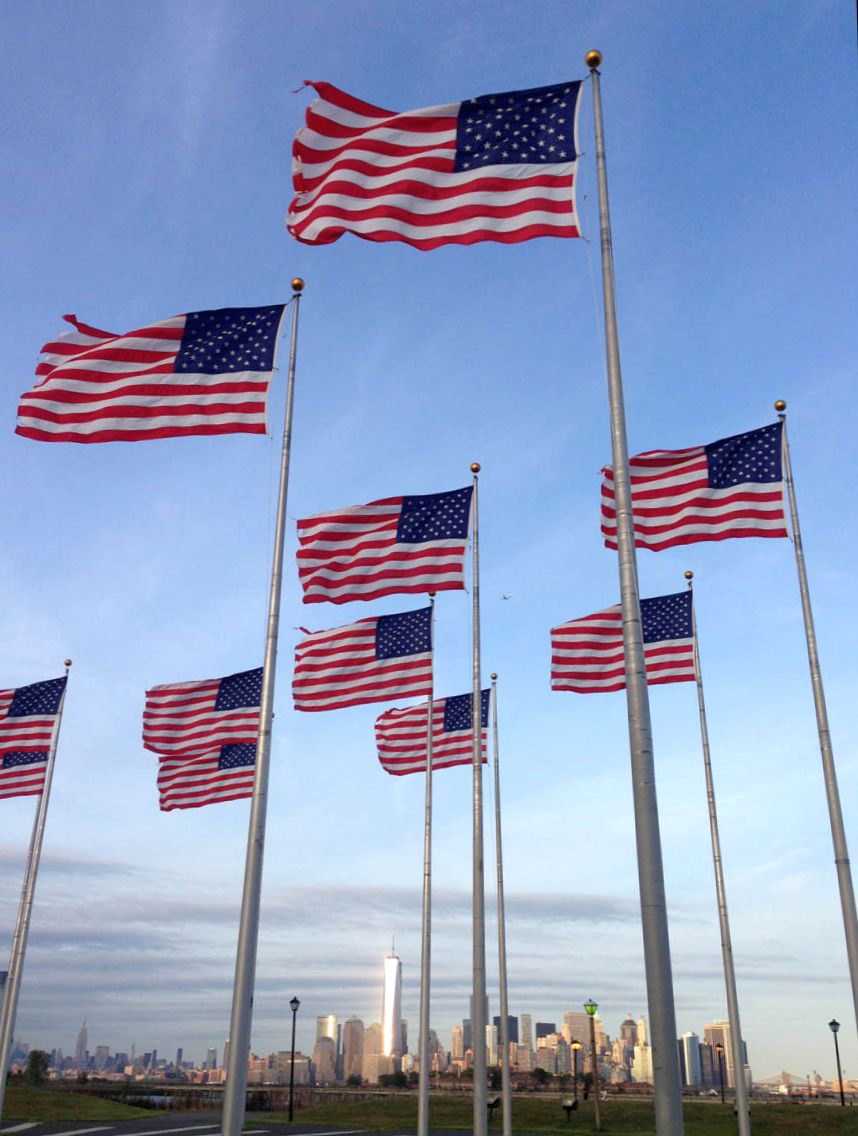 UPDATE, Sept 12, 2013 – The above photos were all taken leading up to 9/11.   I walked the Jersey side river path last night on the actual anniversary and took these below.   (Sorry about the sub-standard quality, but they were taken with my iphone.)  In those days immediately following the tragedy, I found comfort going down to the river and sitting, watching the people come and go.  It was nice to return.

There were more people out than I expected.  I don’t know if I have ever seen that many tripods in one place.  It was interesting to overhear the conversations among friends as they shared their “where were you when?” stories.   Several parents were describing the “Twin Towers” to their children.   There was lots of laughter and one-way cell phone conversations.   It made me recall how deafeningly quiet it was those first couple of nights as people would come to the river and leave flowers or mementos or light candles.  I remember it was so quiet you could hear footsteps on approach… 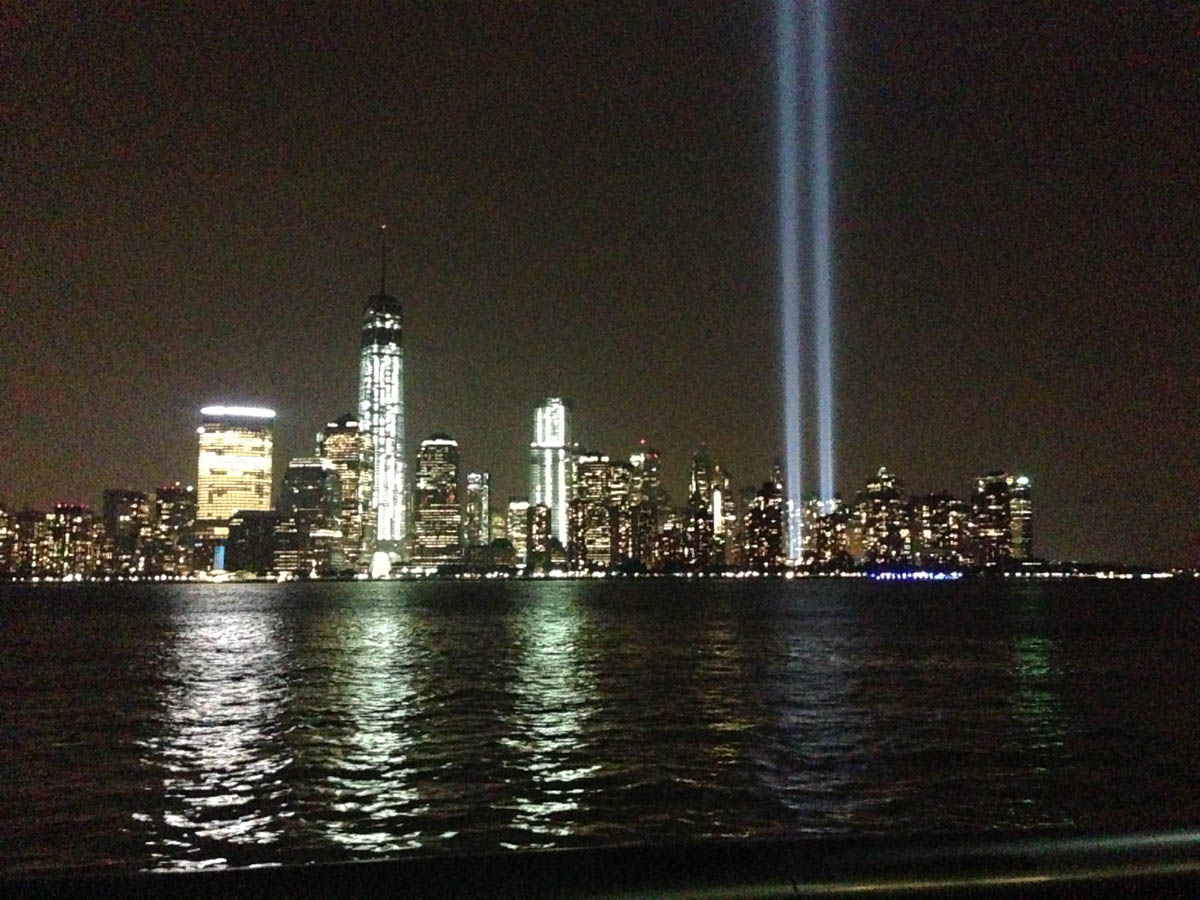 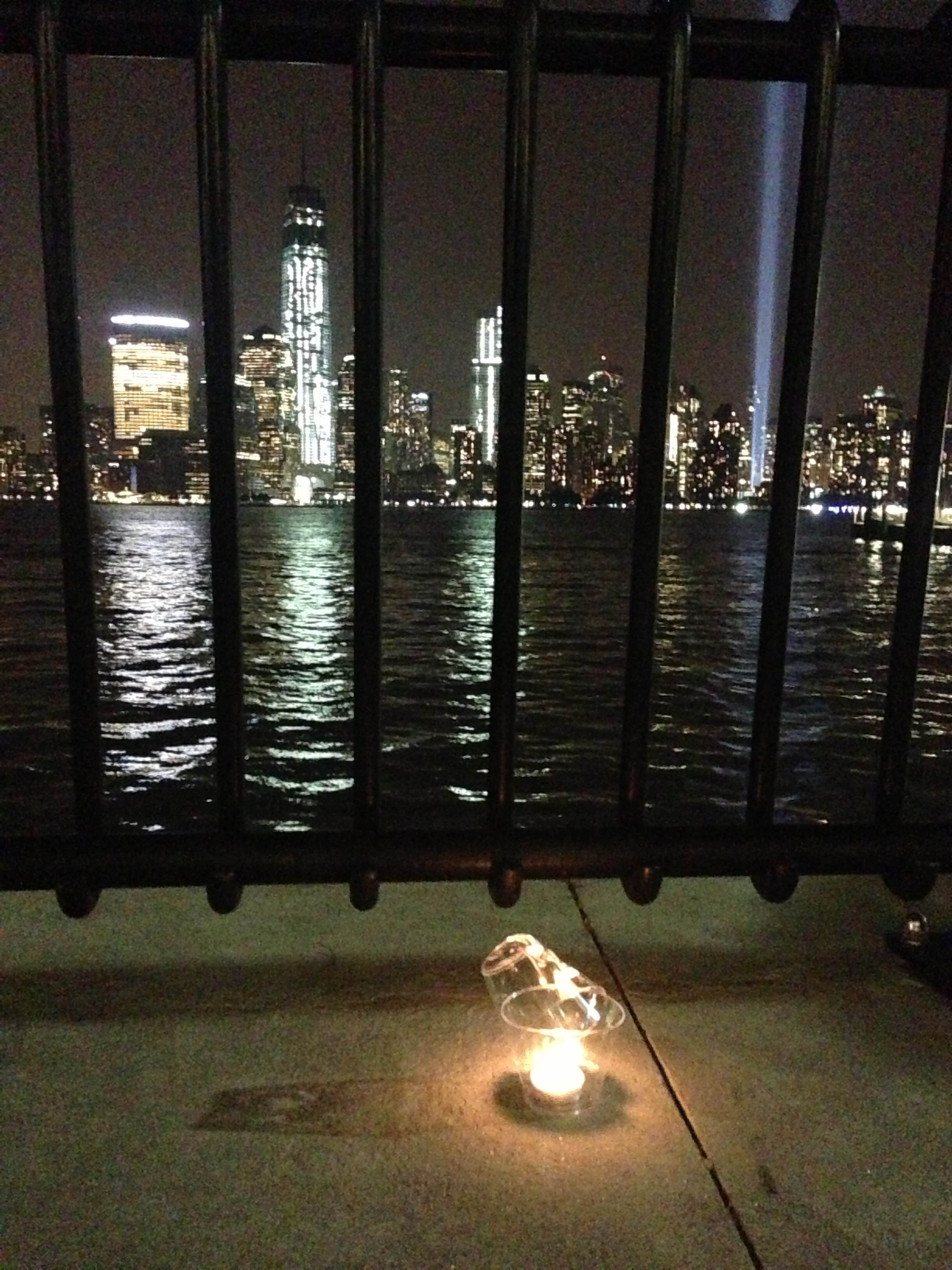 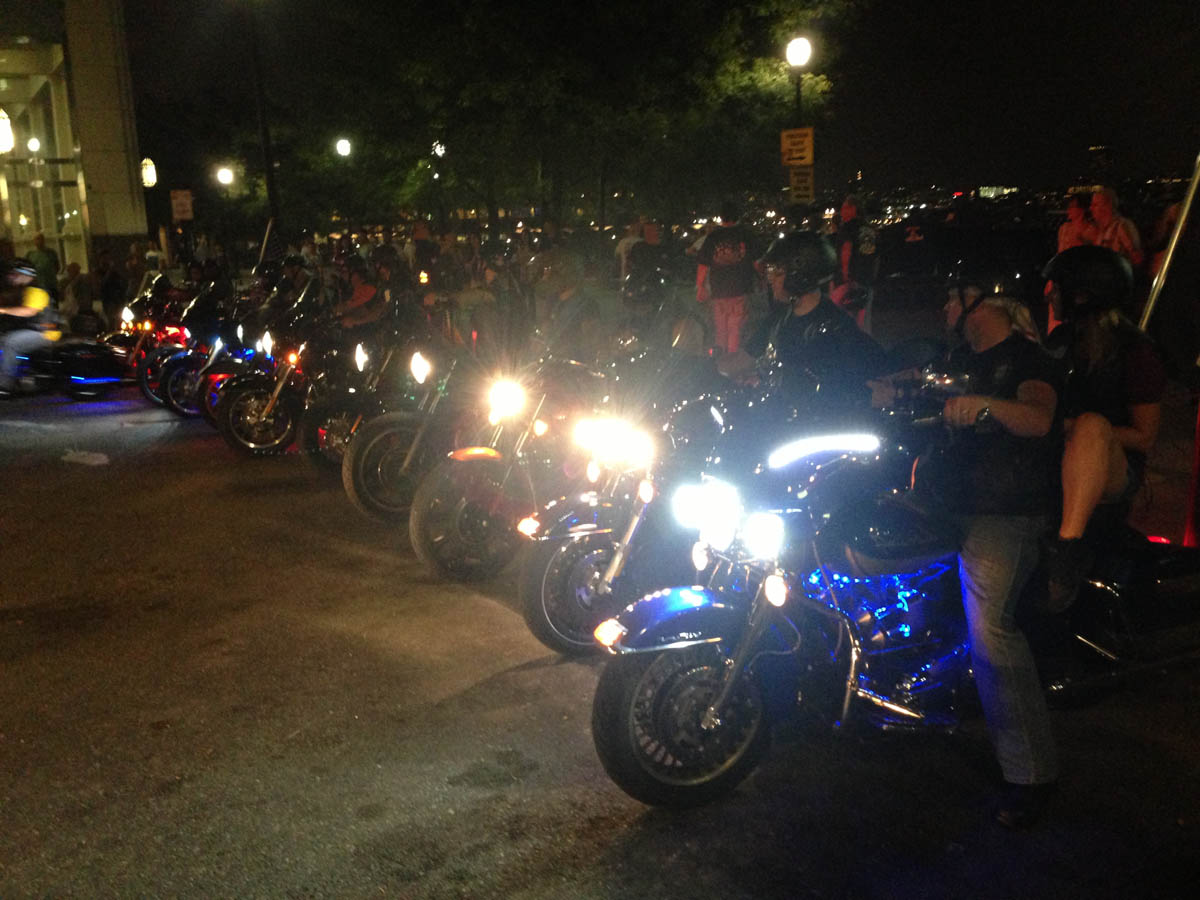 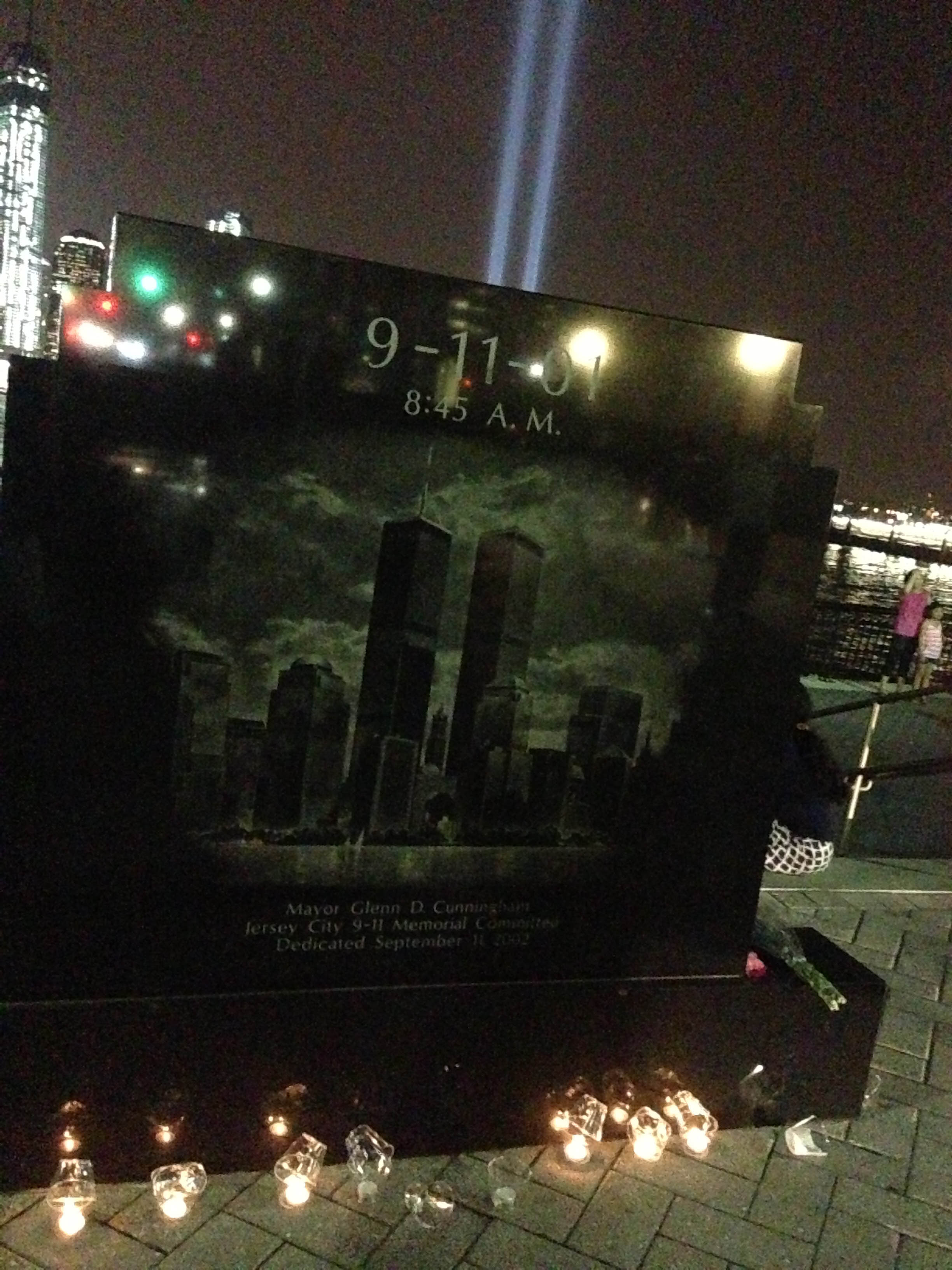 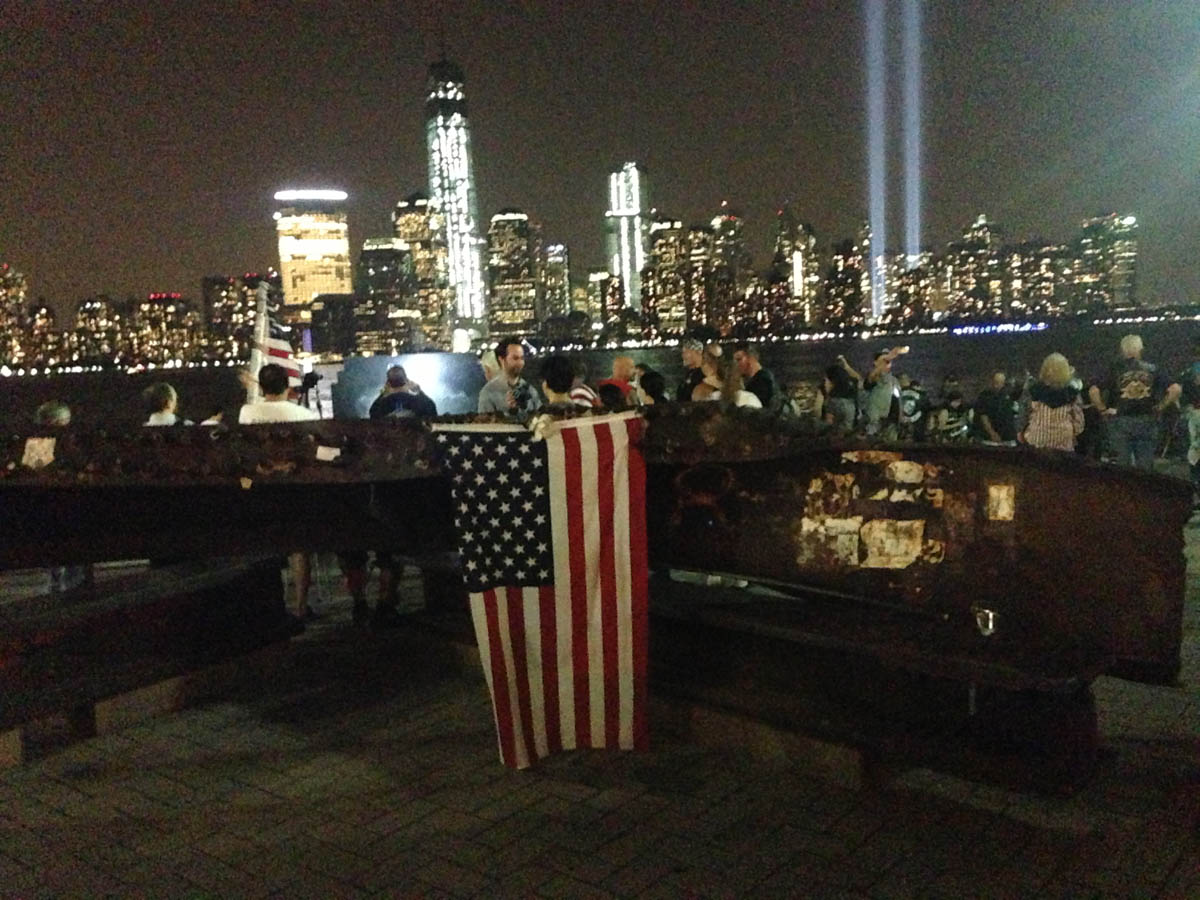