Some may wonder why on earth I would buy an RV to get out amidst nature, only to drive it to New York City and pay to park it in a ridiculously crowded, expensive gravel parking lot.   But it’s all about the sailing…or is it? 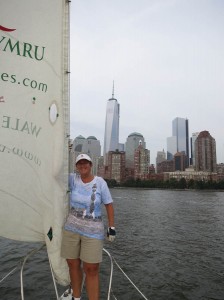 I learned to sail at the True North Sailing club on the Hudson River, which not only offers ASA certification, but also a “club” that allows use of their fleet of J24 sailboats.  These are 24 foot, 4 crew streamlined monohulls that sail like little race cars!   I learned to sail on a J24, and now I live in a 24J.   It had to be destiny, right?

Though I tried to get back into sailing on Lake Lanier in Atlanta, after sailing in the shadow of lower Manhattan, dodging ferries, barges, and cruise ships, sailing among pine trees and jet skis just didn’t do it for me. 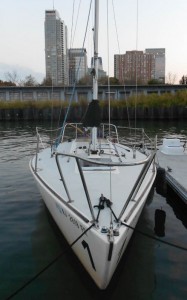 One might also think it’s about getting out and soaking up the summertime sunshine.  But in fact during summer months, the wind can be non-existent, and with the wicked ebb and flood of the Hudson River on a light wind day, one can actually find themselves sailing backwards!   Without a strong wind, chop from the NY Waterway, Staten Island Ferry, cruise ship traffic, etc. can be brutal as the boat bobs to and fro, the halyards clanging against the mast, and sails flapping about in utter confusion.

But once September rolls around, the temperatures drop along with the humidity, skies are that infinite clear blue, and the breeze is strong and consistent.  My favorite month to sail! 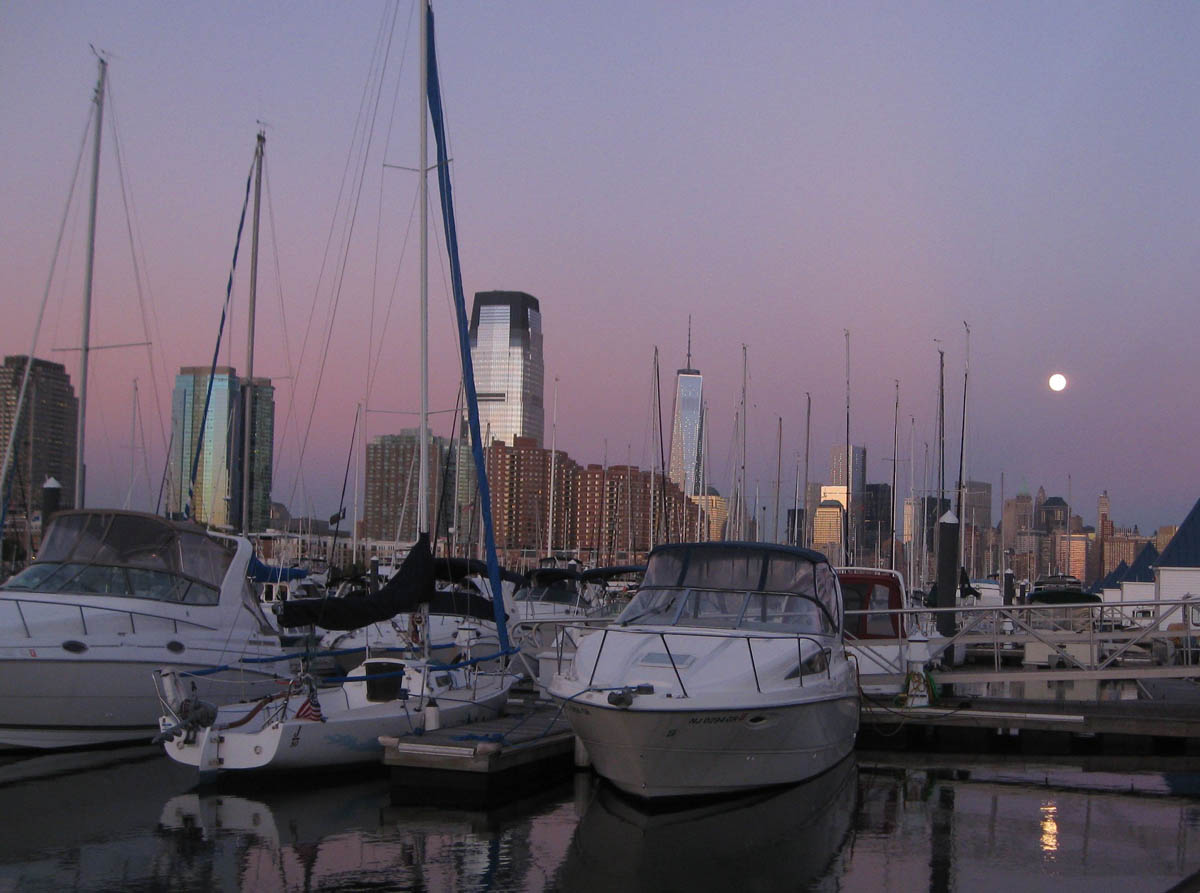 So a few months back, I emailed the owner of my old club and asked him if he would agree to a monthly membership, rather than the usual season of May through October.  Once he agreed, Liberty Harbor was in the GPS! 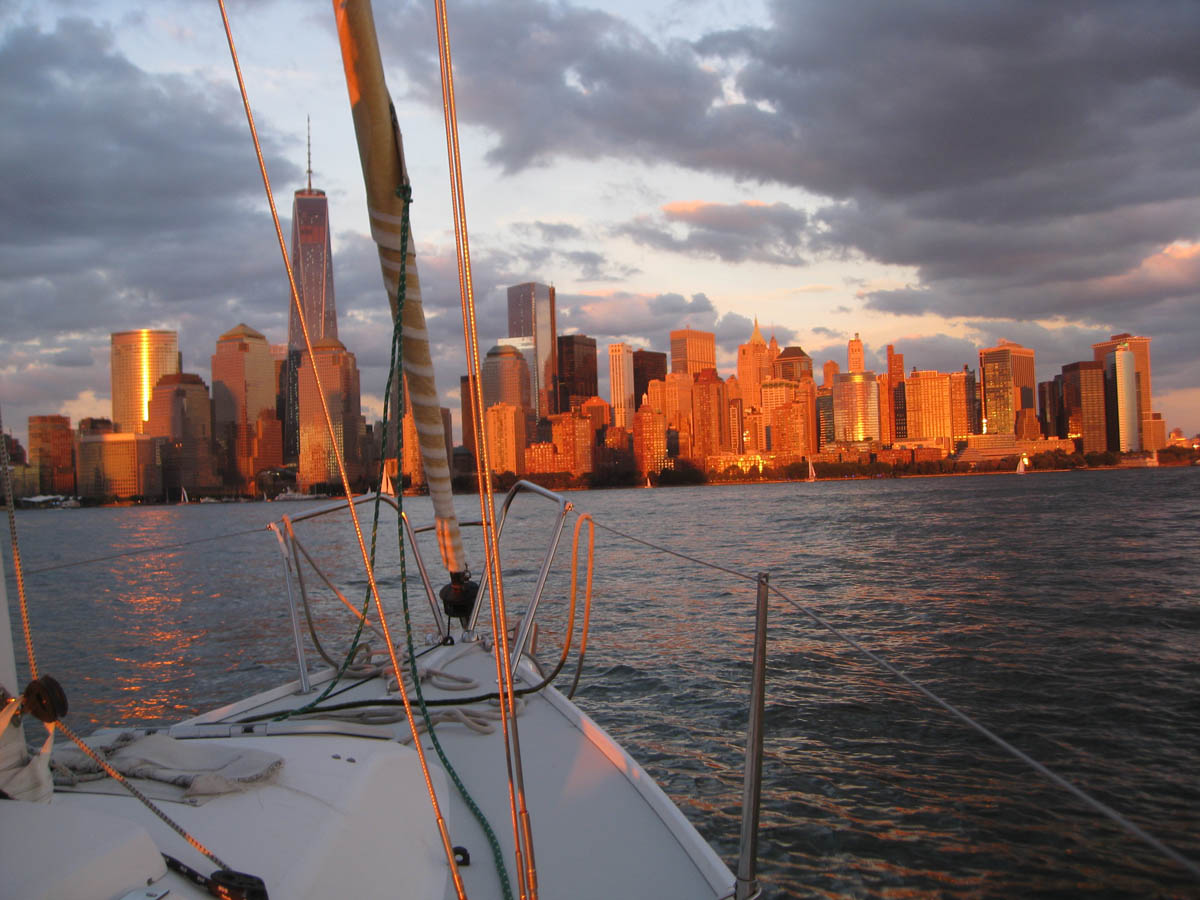 My brother Don came to visit while I was here.  It was great fun to get out sailing with him again! 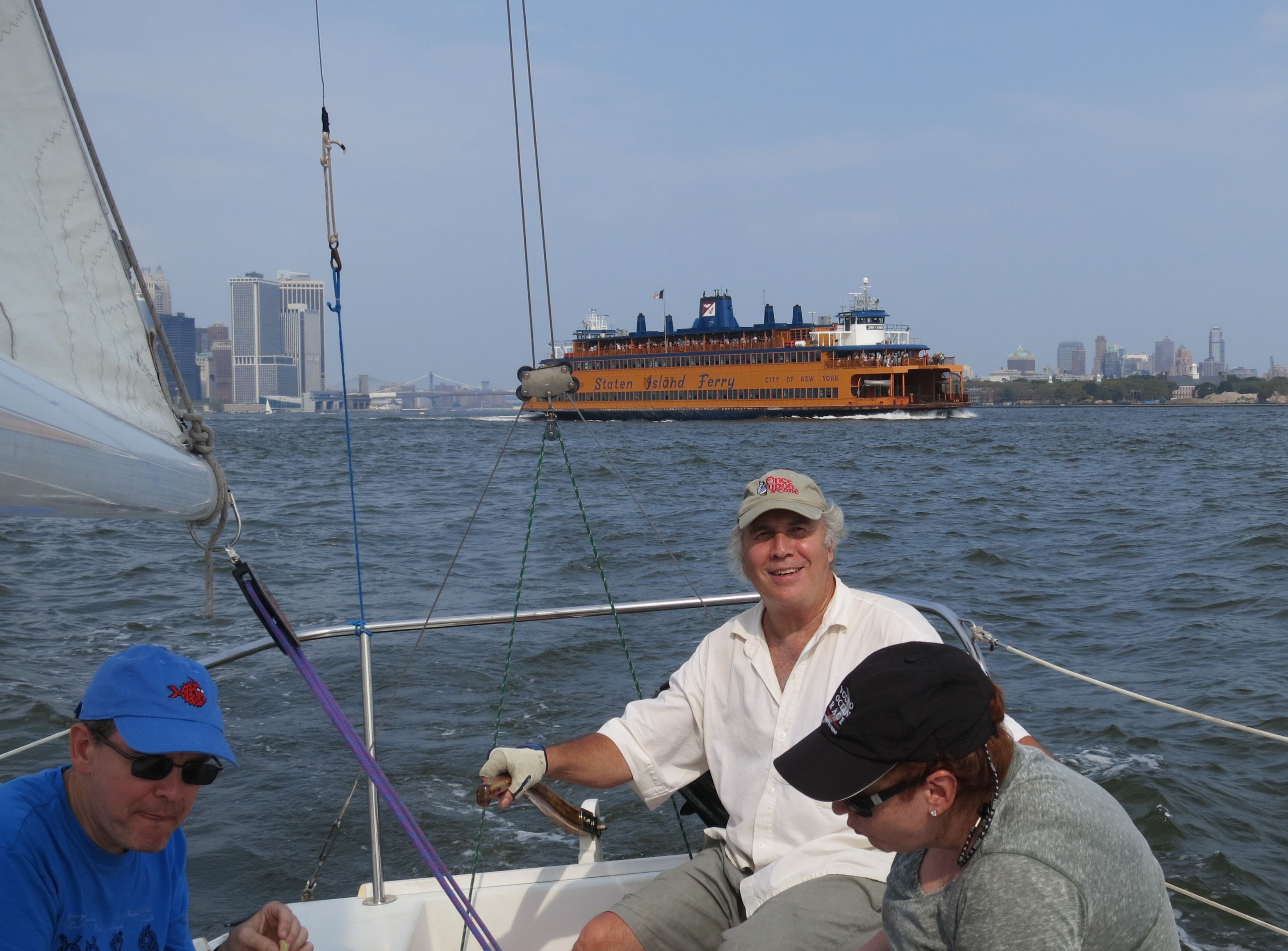 Guess who is sneaking up behind you? 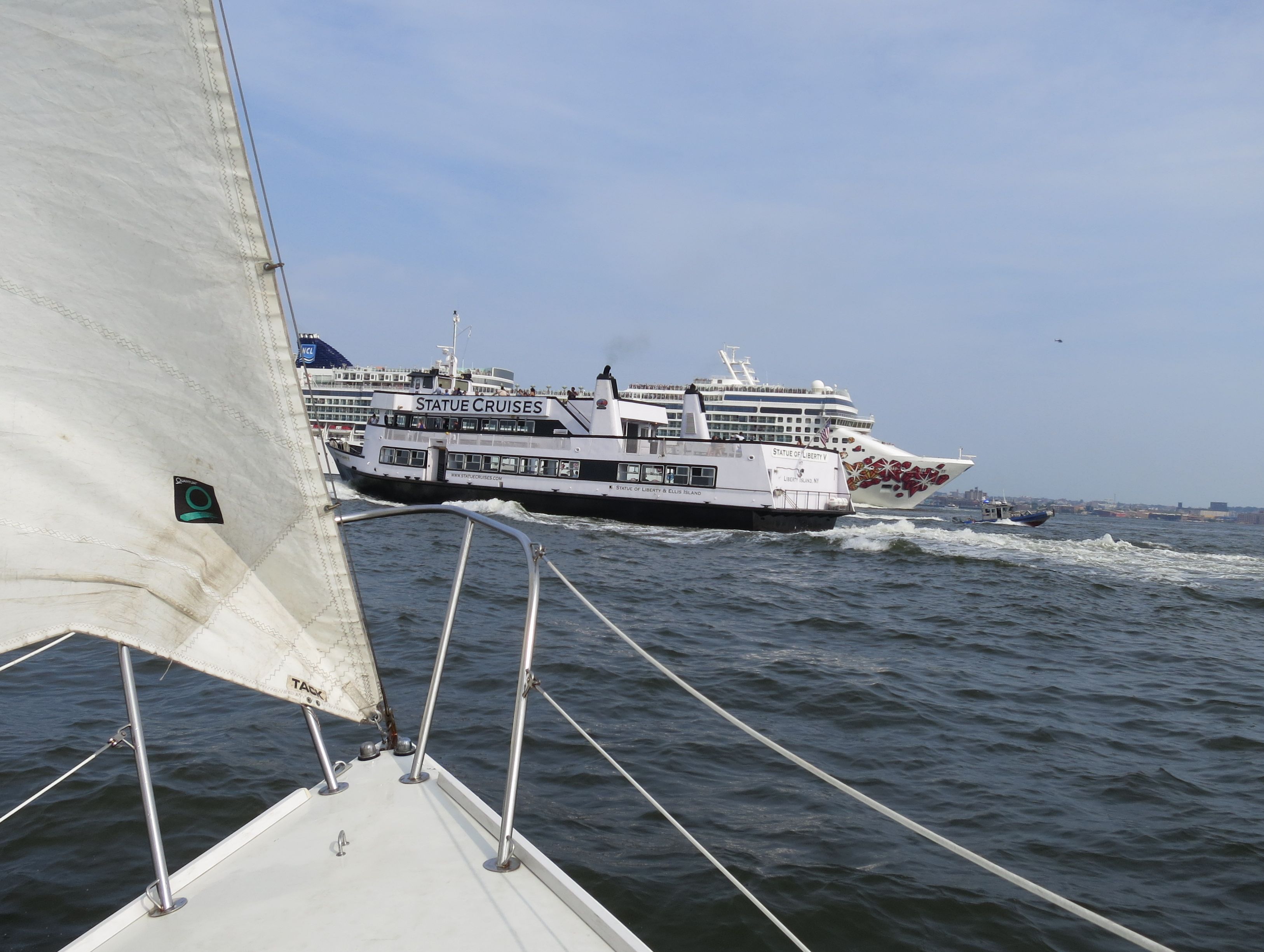 Given that sailing on the Hudson was one of my best memories from the years living here, I miss it like crazy.   So I did a lot of “soul searching and mental saturating” while I was on the boat this time, trying to burn it into my memory files, breaking it down to exactly what is so addictive.   It hit me one day in heavy breeze, as I was at the helm on the downwind run when it was time to turn back and head to the dock.   The sky was a brilliant blue with that low lying tilt of the sun that signifies autumn is on the way.  The smell of the salty sea breeze was heavy in the air, mixed with “Eau de Hudson River,” an aroma so familiar that I inhaled deeply into my lungs in hopes of being able to recall it again one land-locked day. 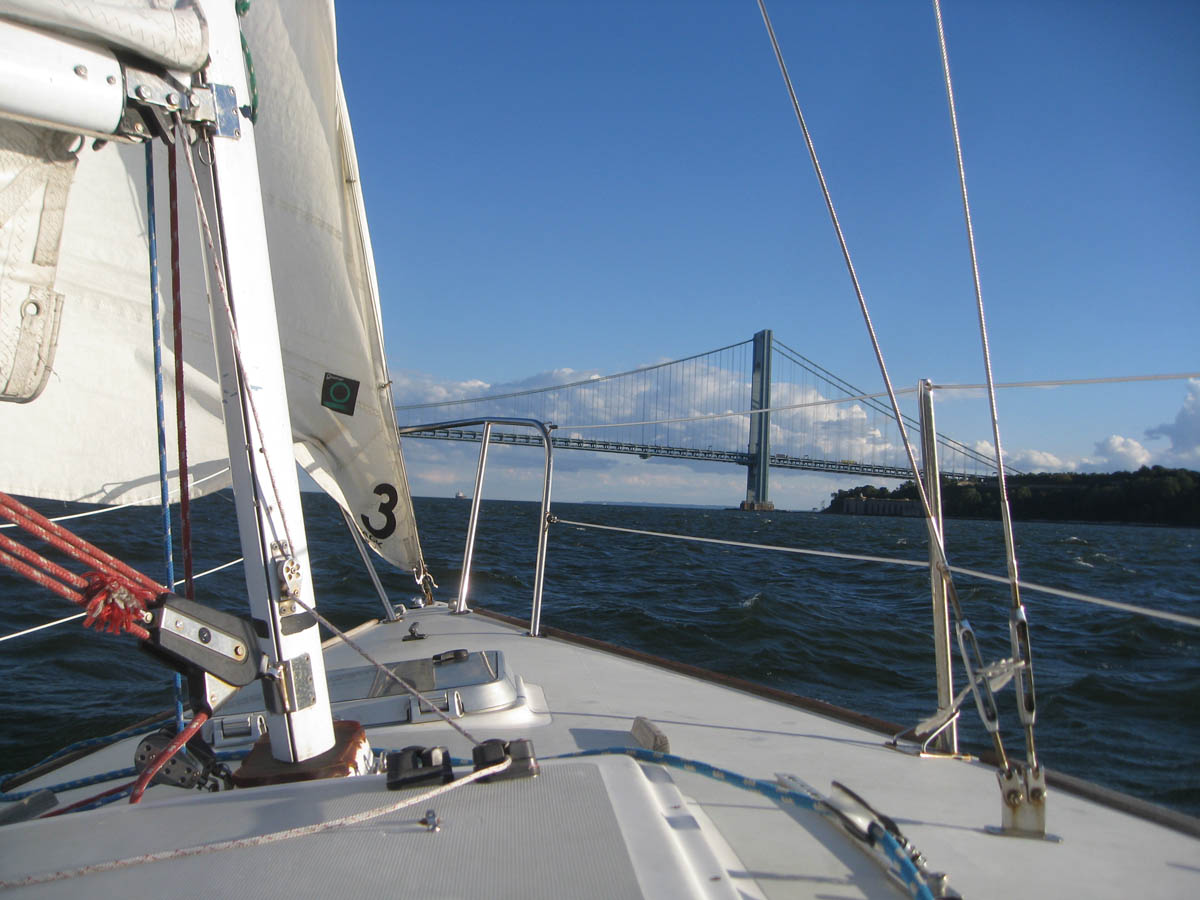 Sailing south toward the Verazanno Bridge… 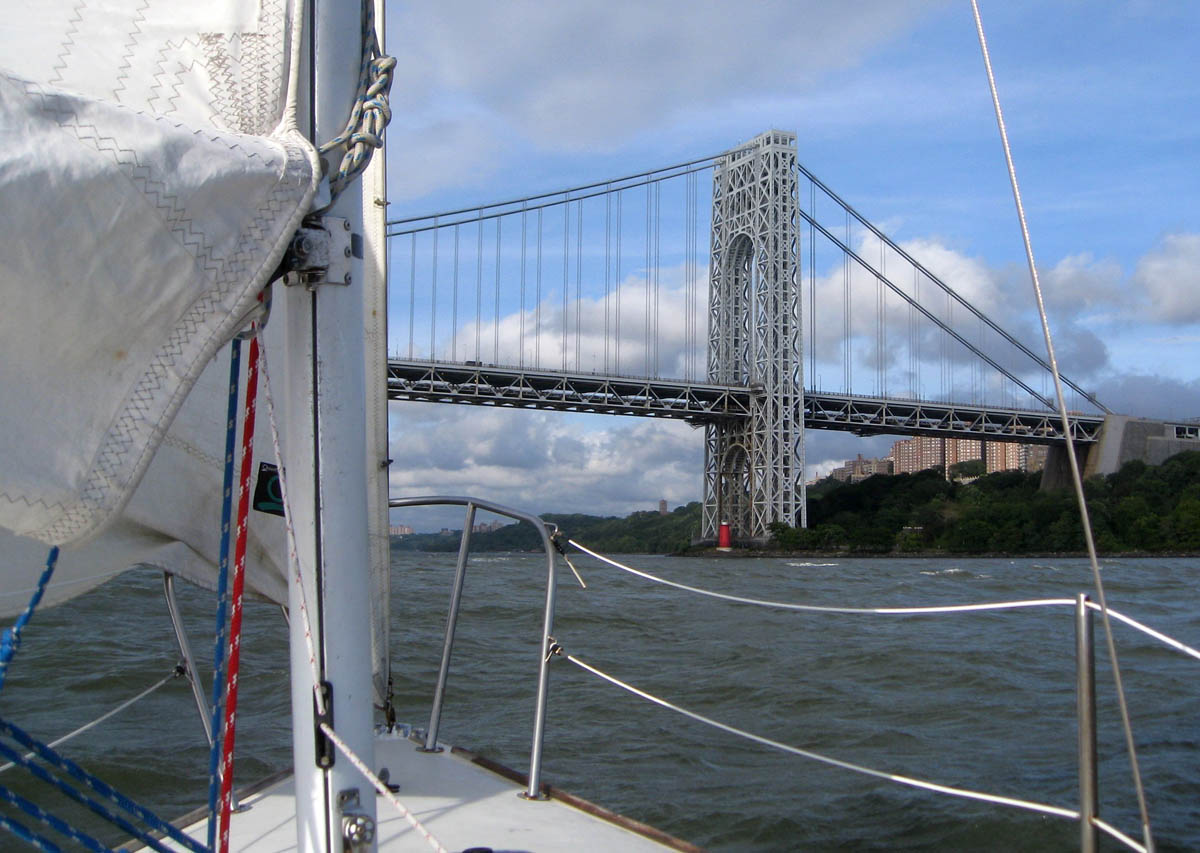 Or north to the George Washington Bridge…

As I sheeted in the main to prepare for the upwind tack back to the dock, the wind caught the sails and heaved us over in a heel that required standing on the lazarette cover, as the floor was now at a 45 degree angle.  Waves were rushing over the the stanchions, the toe rails now in the water.    I pumped the tiller a few times to overcome the weather helm as we flew back down the river, and I realized, it’s not just about the sailing.   I am an adrenalin junkie. 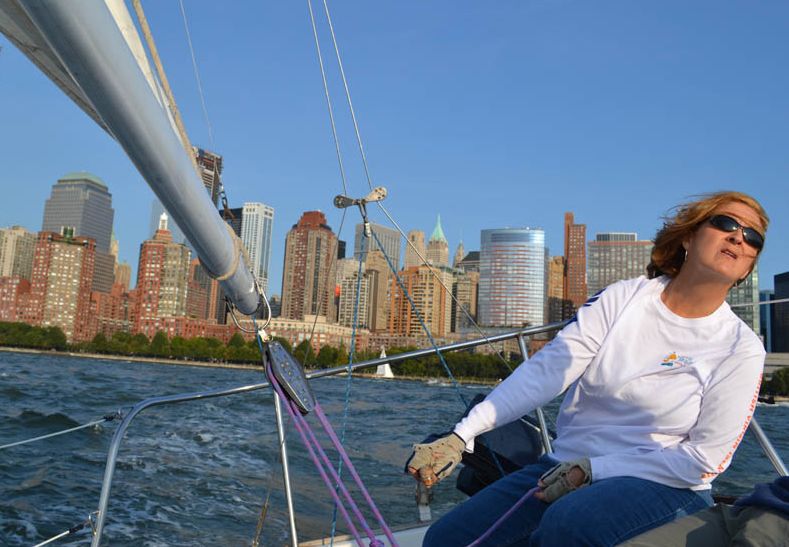 I managed to get out on the water six times in my three weeks at Liberty Harbor.  In the end, I got my fill.   The last day of summer.  Twenty-five knot winds.  Small craft warnings.  Whitecaps on the river.  Full moon tide.   Giant waves over the bow.  Soaked to the bone on a hazy gray day.   I think I am finally ready to give in and admit, “Summer is officially over!” 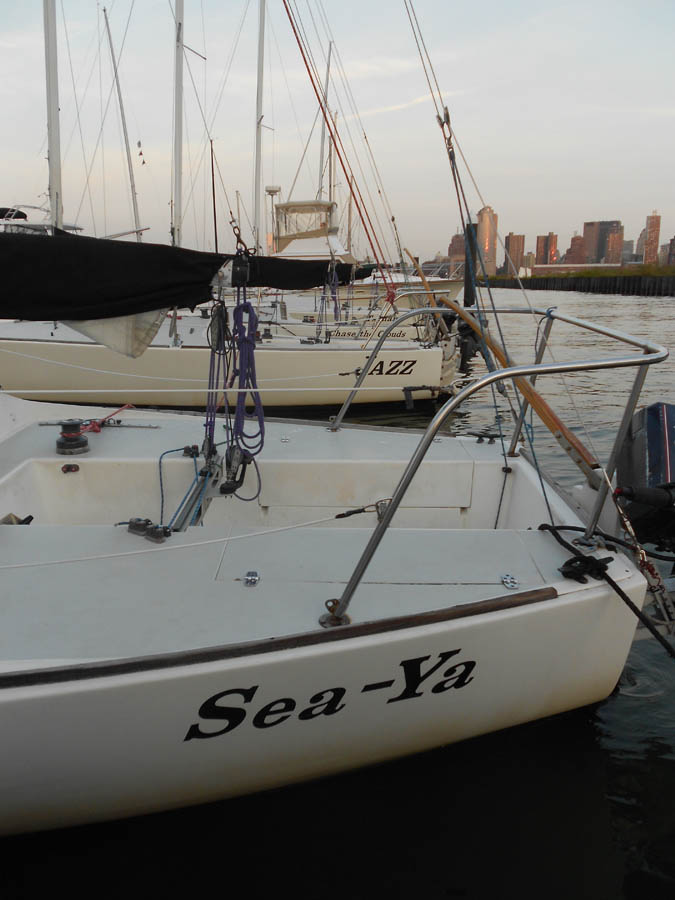 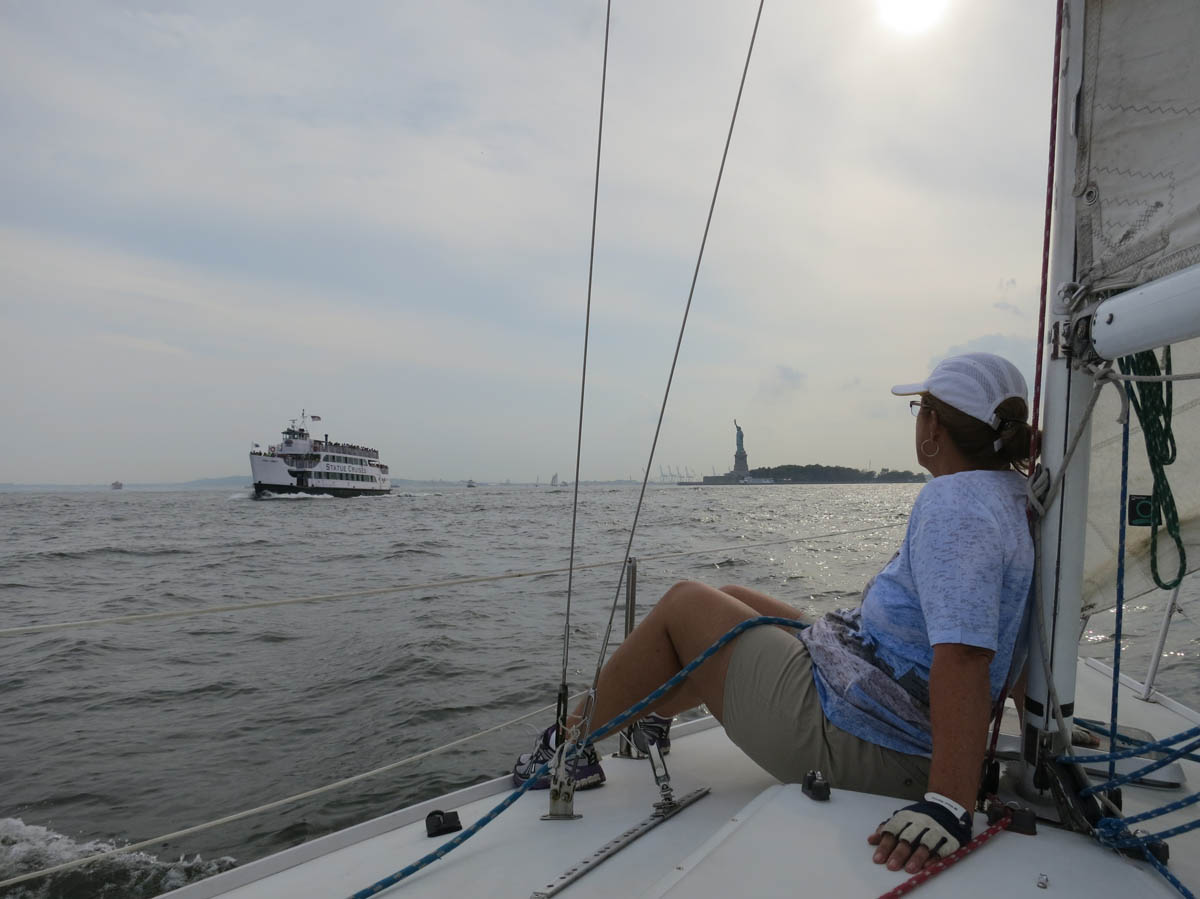 2 thoughts on “It’s all about the sailing…”