The title of this blog post could refer to my northernmost turning point.   Having tagged the Canadian border, I am now slowly turning my way back in a southwestern direction to be with my family in Texas for the holidaze.

Or, it could refer to my reluctance to turn 59 years old, as I did last Wednesday.  Just one more year until I have to form my lips into that utterly scary word of “sixty.”  (A bit of personal trivia; I share the same birthday with John Lennon, so my annual tradition is to listen to the White Album, if for no other reason than to hear him sing, “They say its your birthday…its my birthday too, yeah!”) 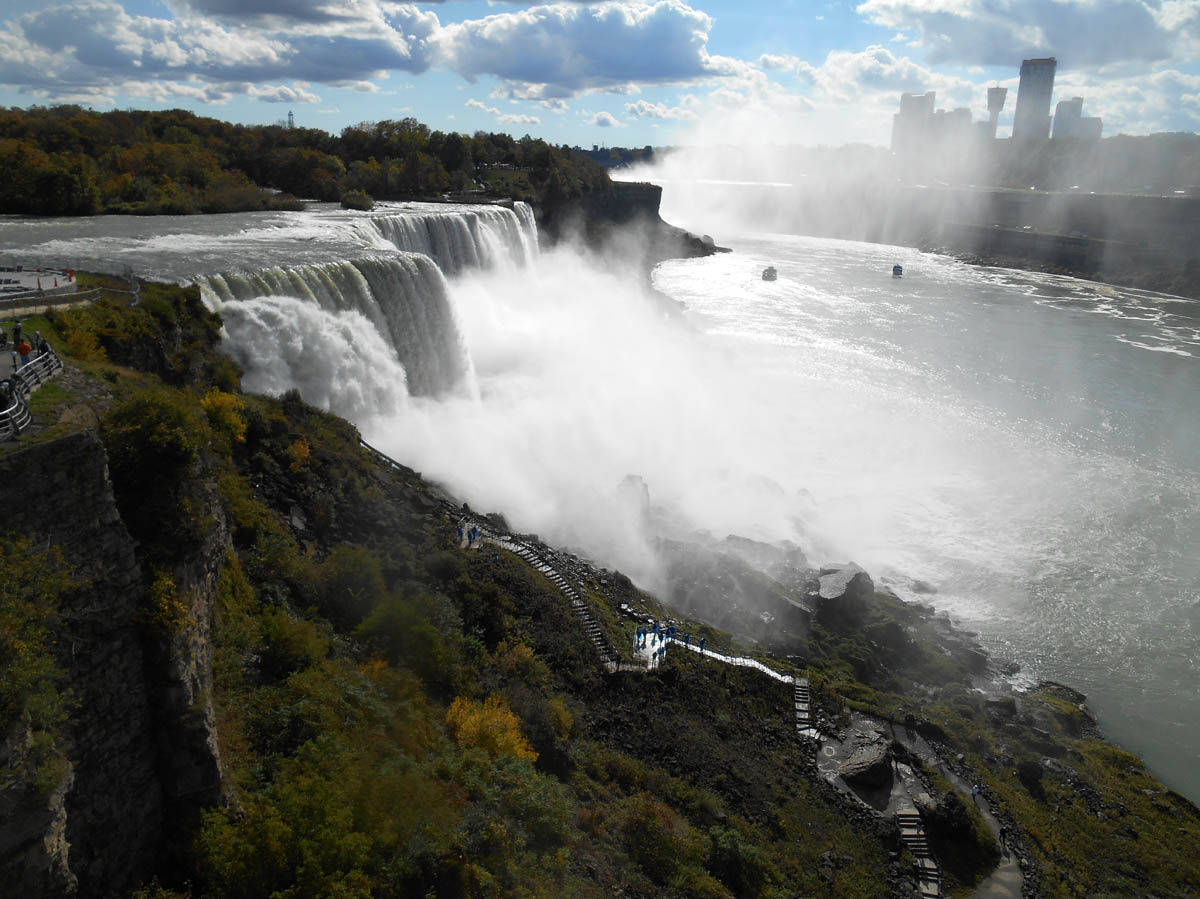 If you are like me, a child of the 60’s and 70’s, growing up on a household with only one TV and four channels, then you instantly knew, “Oh…she is in Niagara Falls!” 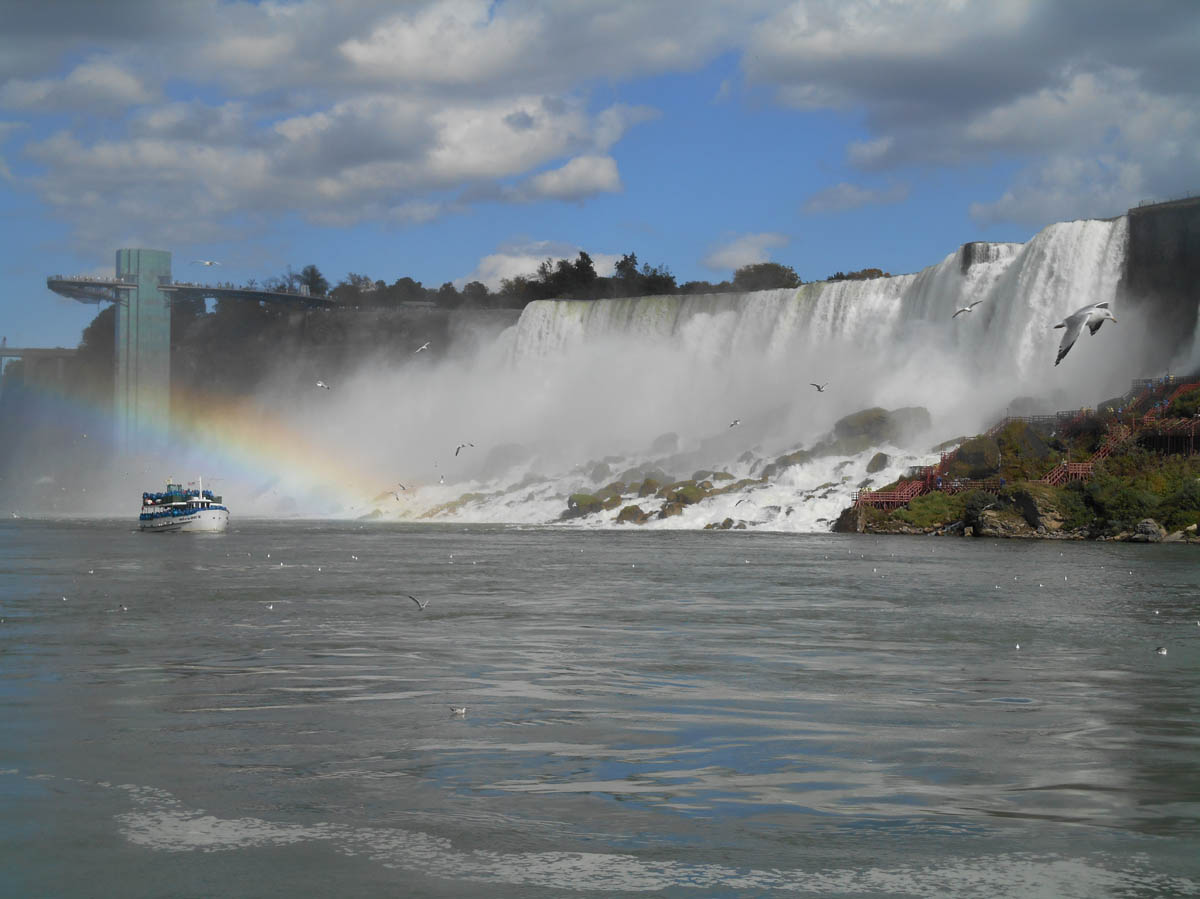 After school TV was limited to only a few programs, and even fewer if you had an older brother.  😉    I was raised on TV shows like the Twilight Zone, Outer Limits, and of course, the Three Stooges.   If you ever saw any Three Stooges episodes, you no doubt remember the cult-like response to the word “Niagara Falls.”   “Slooowly I turned, step by step, inch by inch”:…a skit which still cracks me up, even to this day.   So it was with a “Nyuah, nyuah, nyuah!” that I approached the highway signs directing me to a place that still evokes a response from us “juvenile elders.”  NIAGARA FALLS!!

I camped 15 miles outside of town at Four Mile Creek State Park, right on Lake Ontario.   It was immaculately clean and peaceful for a state park…all except for the night when the winds got up to 35 mph, as I stayed holed up inside, rethinking my “lakeside space” as I watched the tent awnings uproot and blow away, one by one.   Otherwise, it was a pleasant place to escape the heavily touristed Niagara Falls State Park, where I could still park for the day with my Four Mile Creek camping fee, a $10 per day savings. 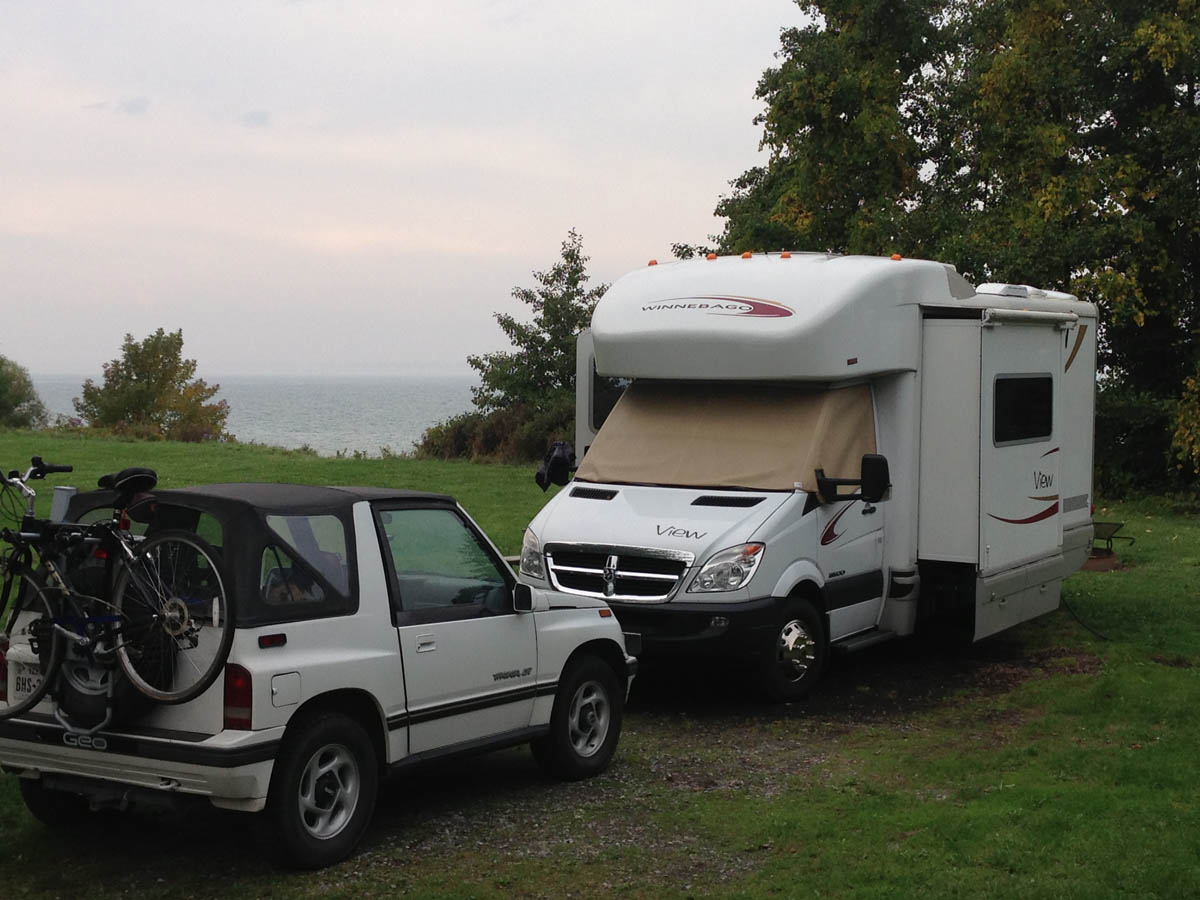 I was surprised to learn that 20% of all the fresh water in the world comes from the Great Lakes, with all the outflow emptying into the Niagara river, eventually cascading over the falls. This happens at a rate up to 40 miles per hour, which can make any walk over a pedestrian bridge or a stroll along the sidewalk path feel a bit tenuous, like “living on the edge.” One small slip or trip for man, one giant leap for the ten o’clock news! 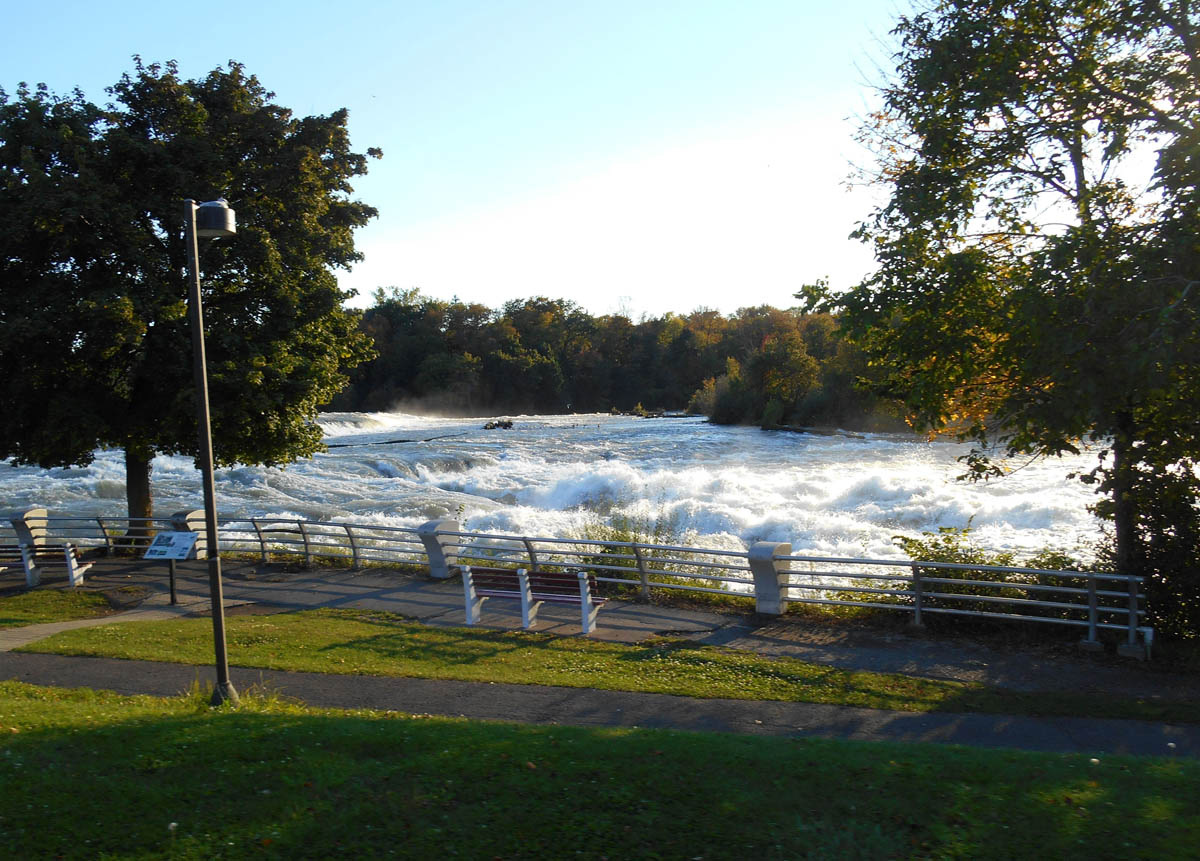 Niagara River rushes past sidewalk at up to 40 mph!

Unbeknownst to me, Niagara Falls is actually made up of three falls, the largest being Horseshoe Falls… 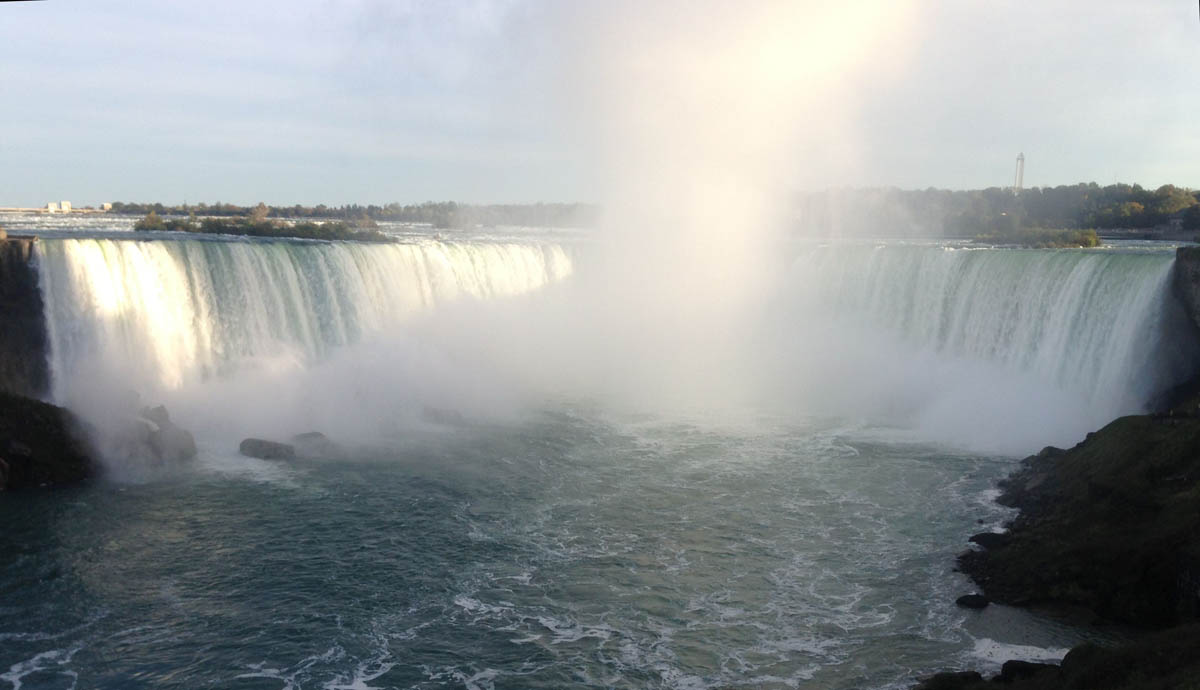 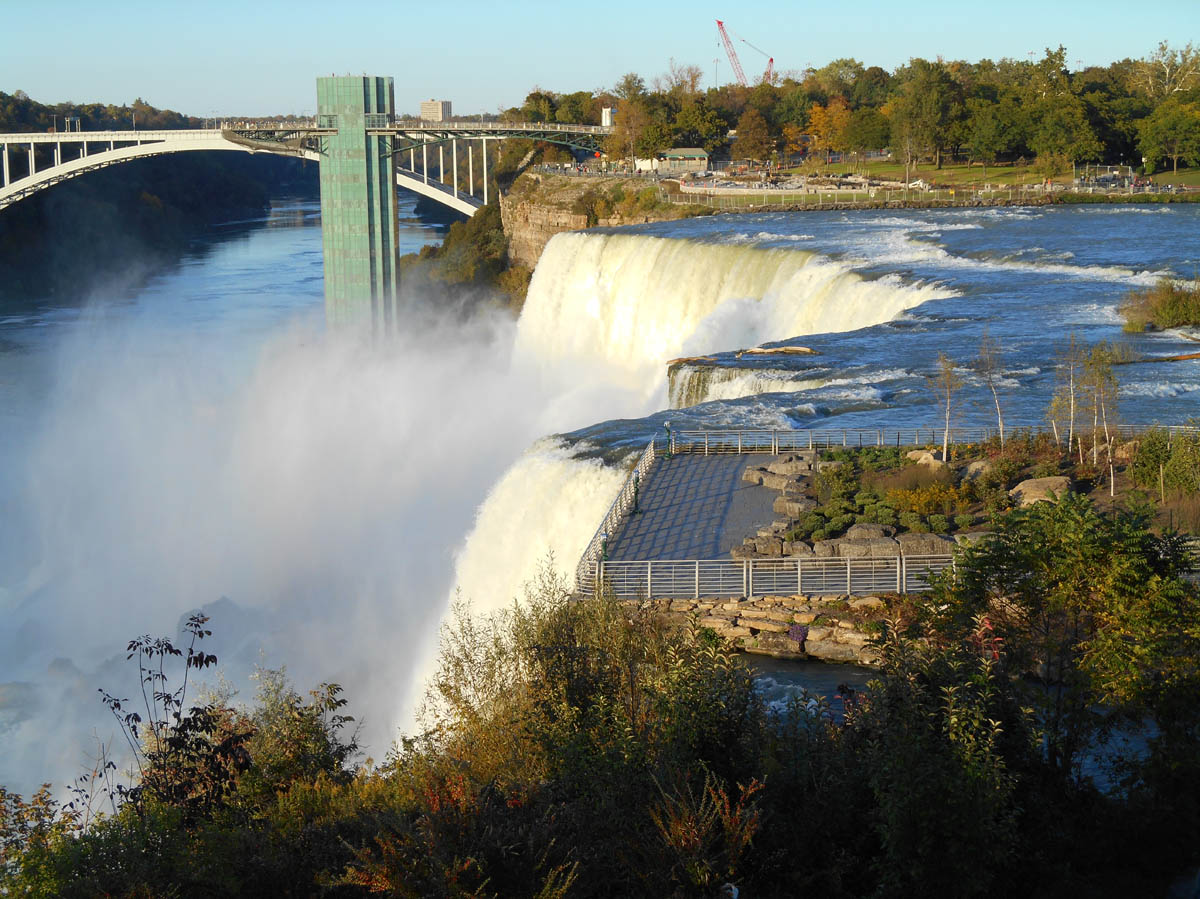 And the smallest, Bridal Veil Falls. 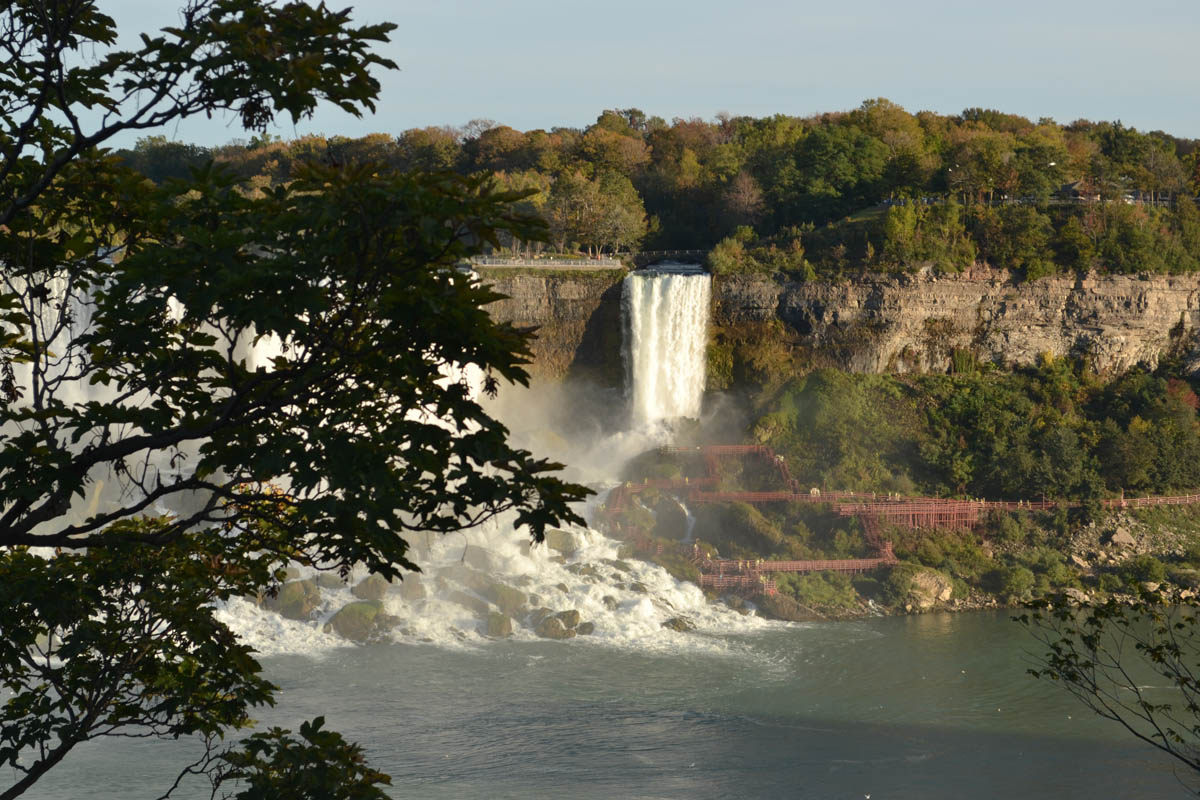 Having come this far, I was going to “do it all,” so I bought the Discovery Pass, and started my orientation with a ride on the famous “Maid of the Mist” boat ride which cruises along the American and Bridal Veil falls, and stops 170 ft beneath the brink of Horseshoe Falls. 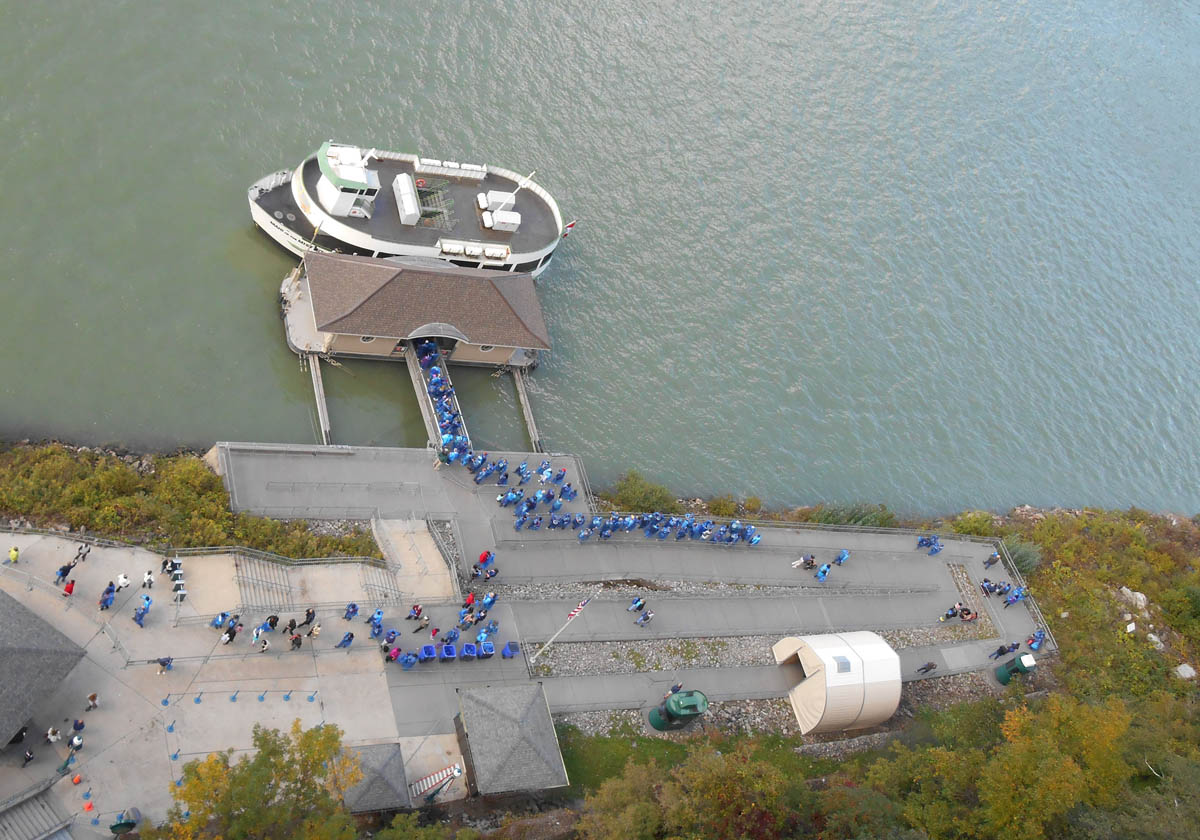 “Maid of the Mist” boarding, taken from Observation Tower

This entire ride takes only about 20 minutes, and takes quite a comedic turn as everyone starts out by posing for “selfies” sporting their bright blue “Maid of the Mist” ponchos. The first part of the ride is spent jockeying for position along the rail to get the absolute best possible spot to take photos. The middle part of the ride is spent retreating from that same spot, ducking for cover while torrents of water rain down from every direction. The last part of the ride is spent in a state of shock, shaking off water and disbelief like a soaked puppy, while examining camera equipment for damage from the unexpected deluge. Or at least that was my experience. I expected “mist,” not “monsoon!” 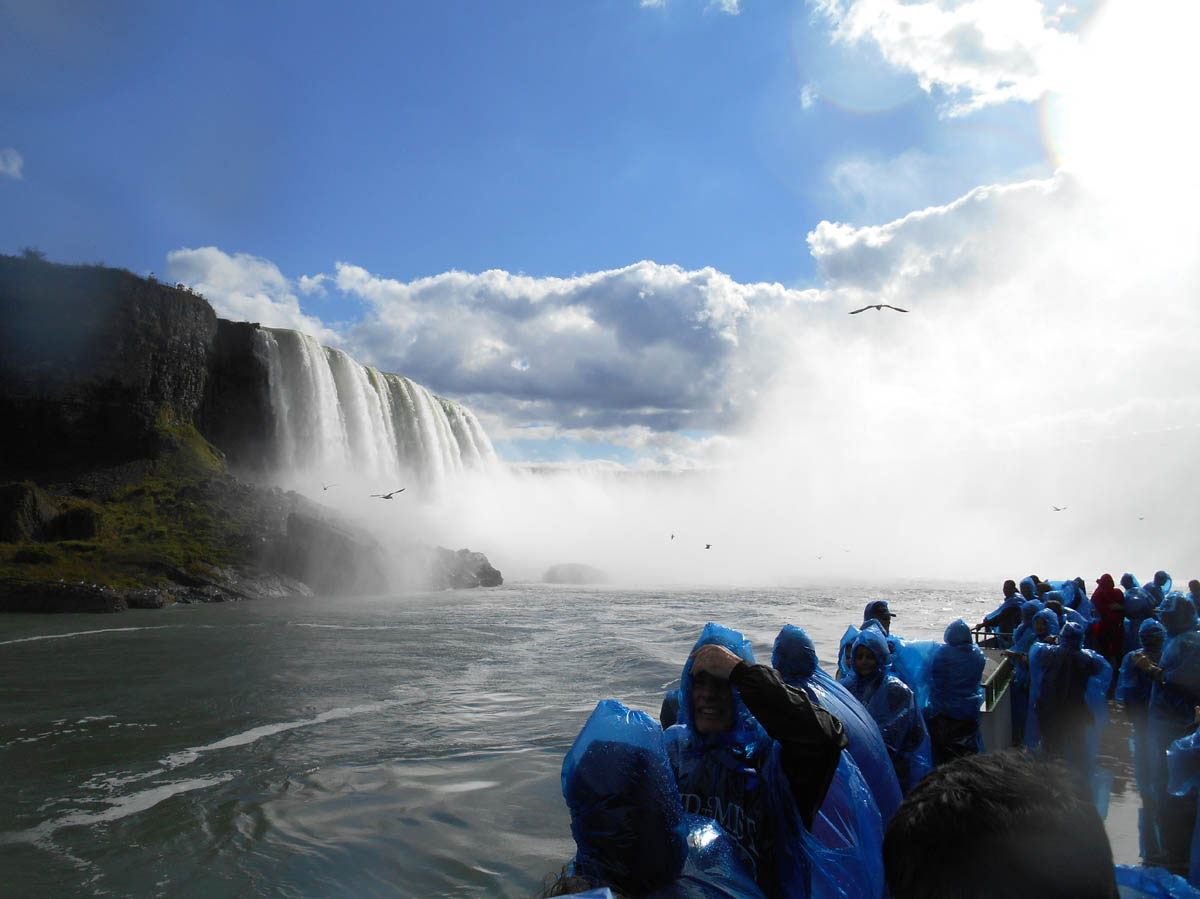 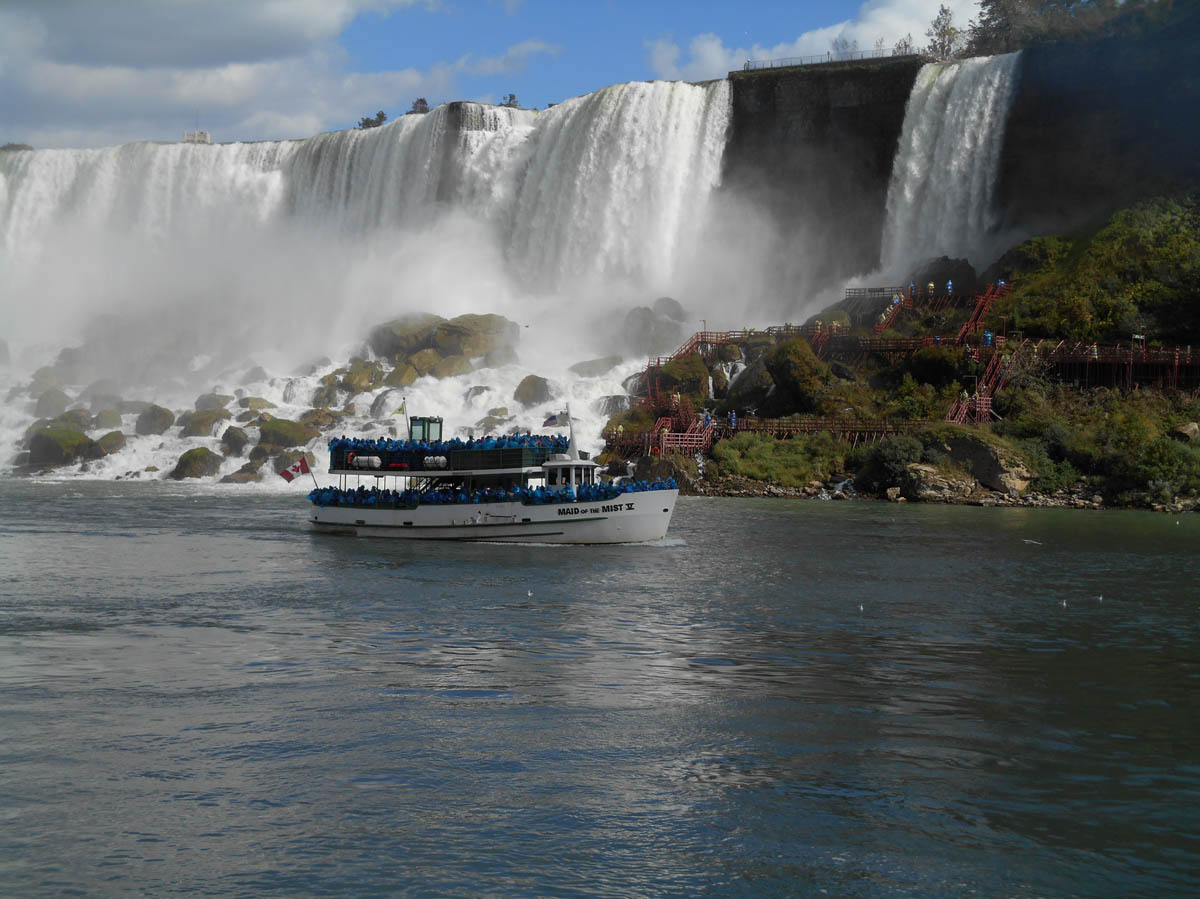 Next stop was the “Cave of the Winds” tour.   (Here’s a tip – do these attractions in reverse order.  Cave of the Winds gives you a lovely pair of souvenir water sandals that would have certainly been a welcome wardrobe addition for the “Maid of the Monsoon” boat ride!)

An elevator takes you 170 feet down to the base of Bridal Veil Falls where you can climb a series of scaffolding-like boardwalks and staircases to reach the “Hurricane Deck,” where it is possible to feel the awe-inspiring, mesmerizing, thundering power of the falls. 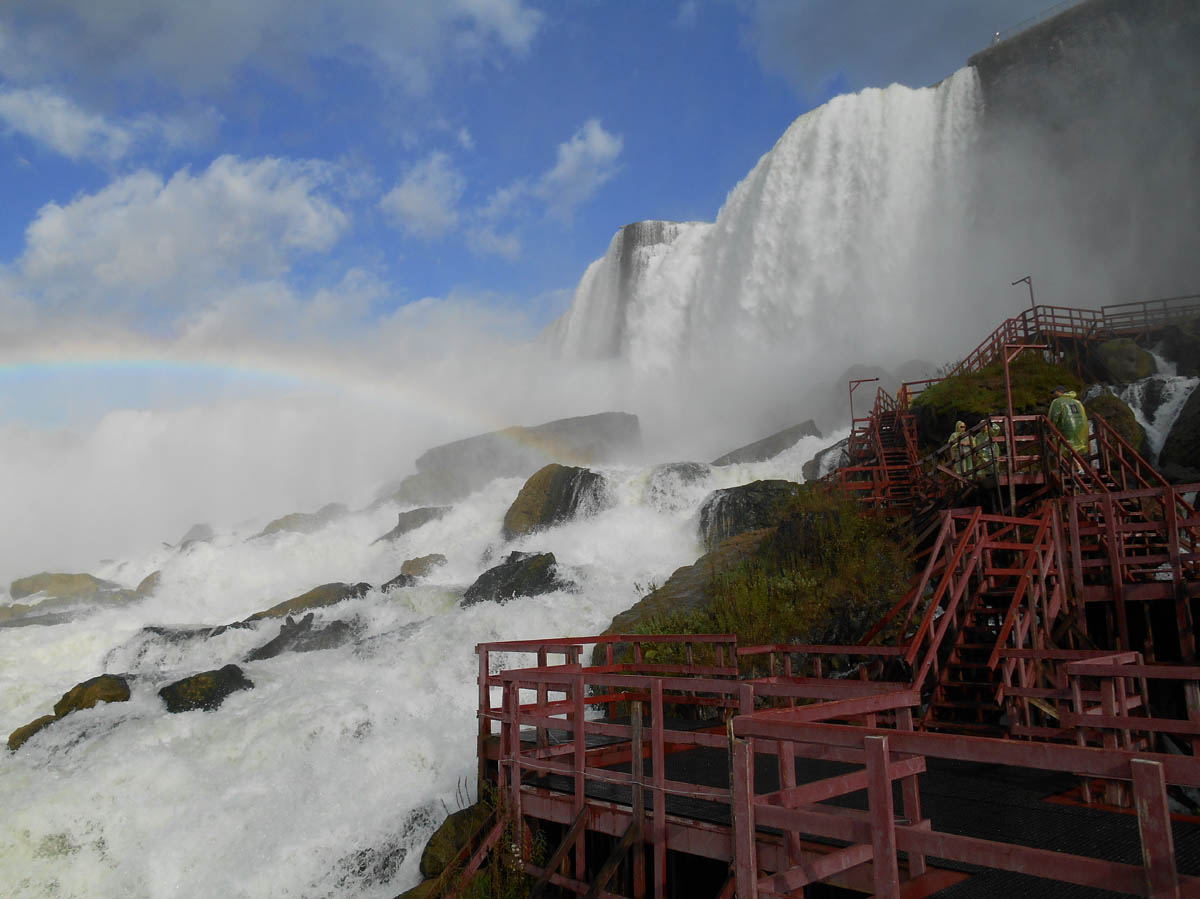 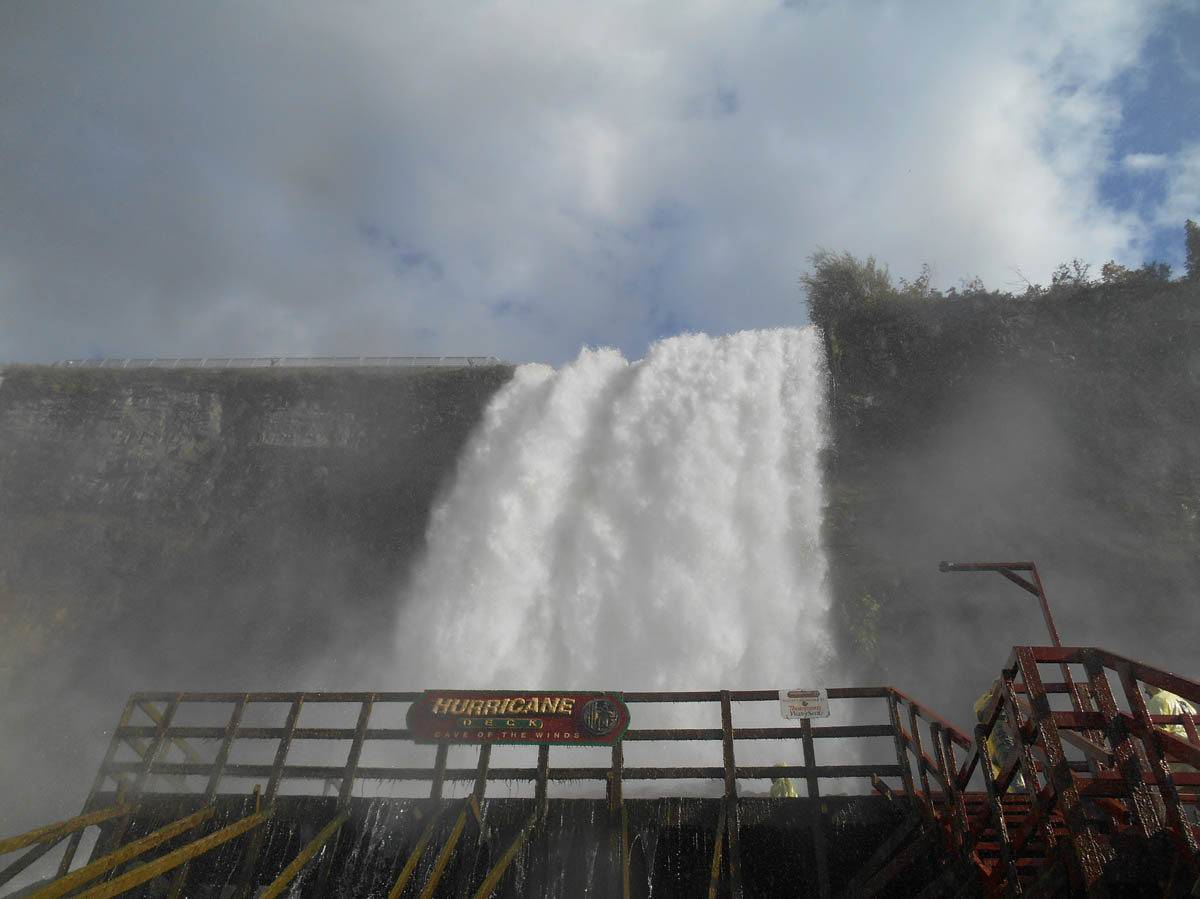 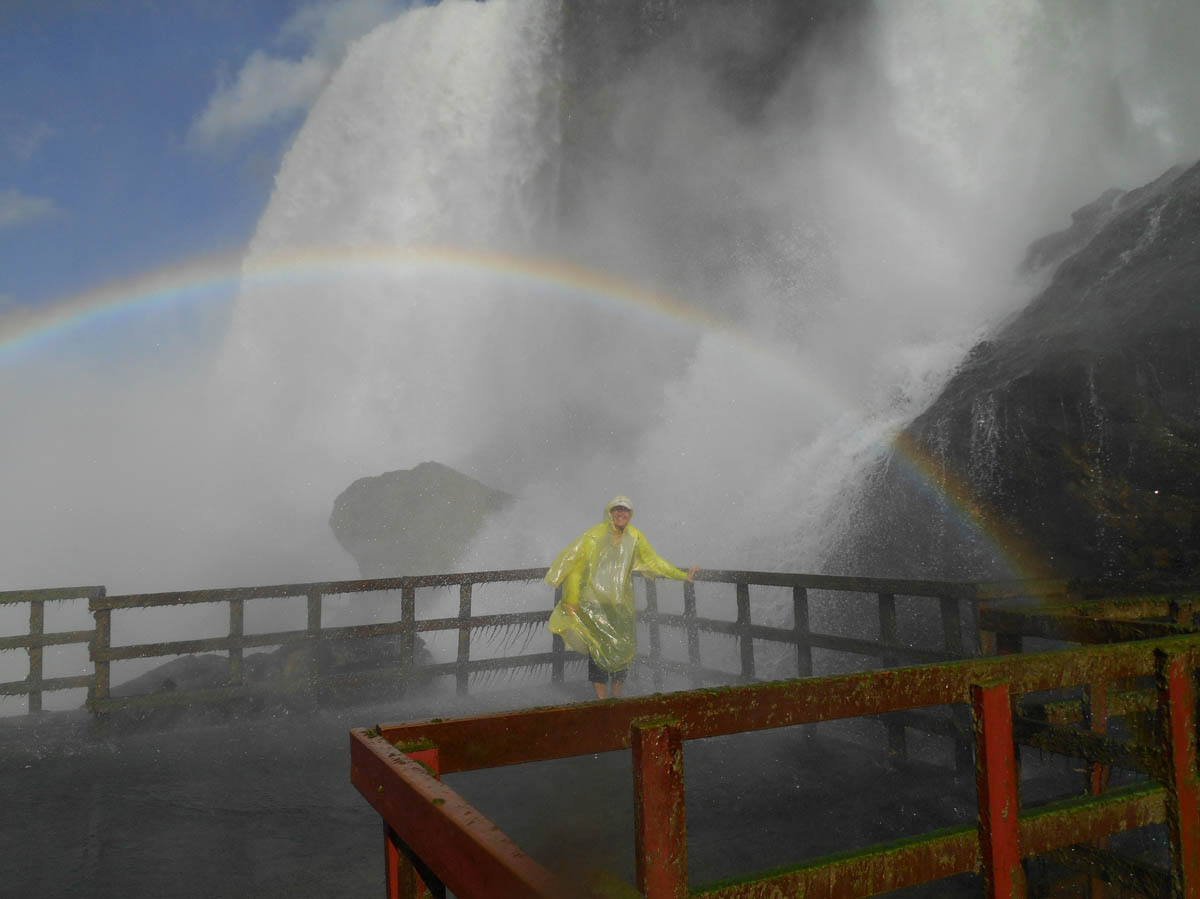 This deck is torn down and reconstructed every year to avoid destruction by the flow of ice over the river. 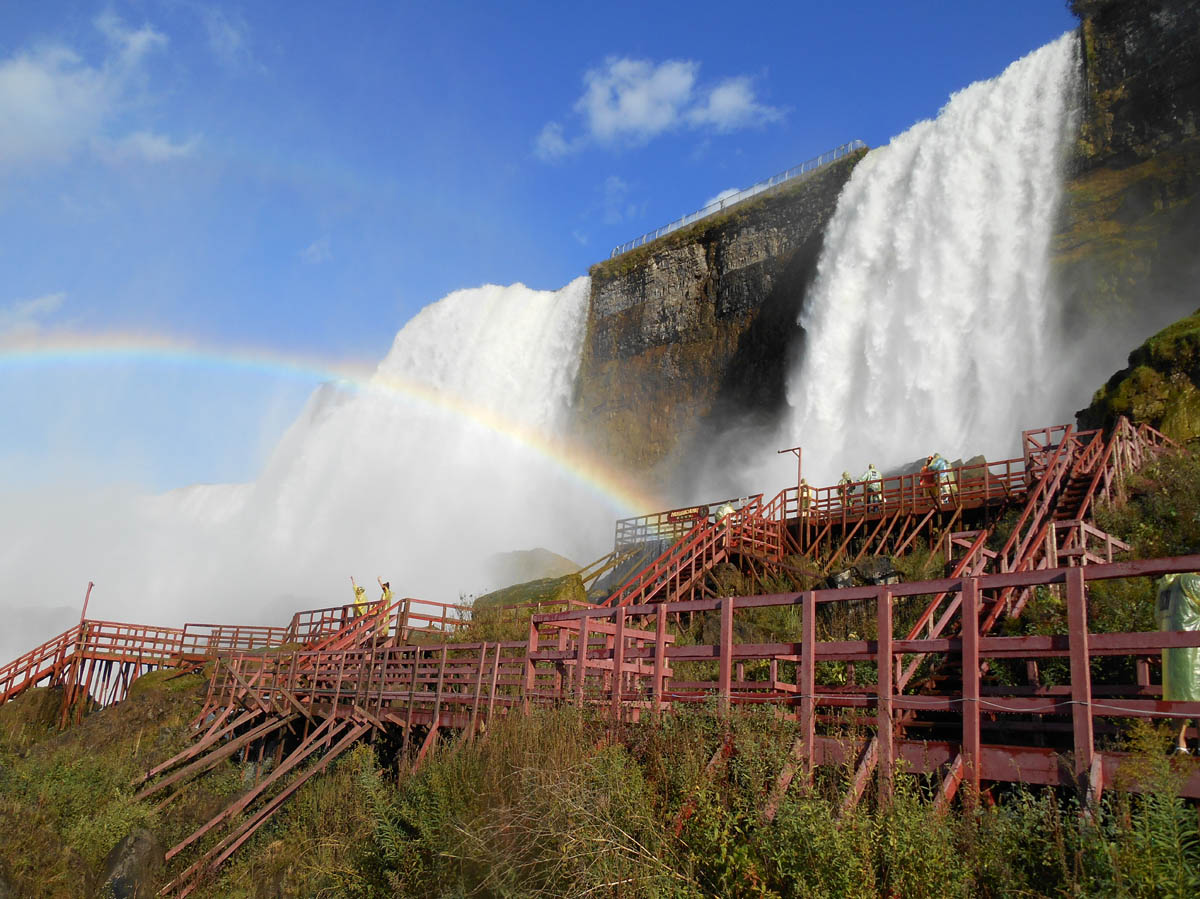 Next up….“Slooowly I turn” at the Canadian side… 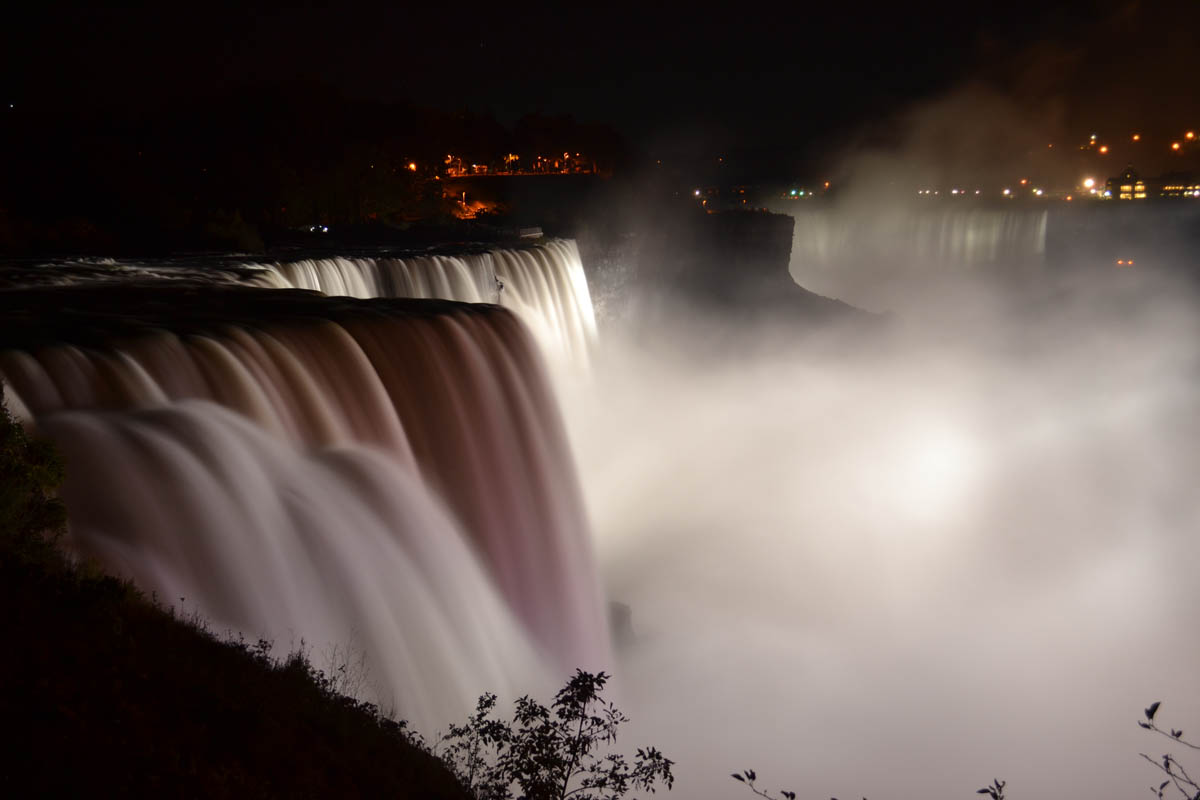 10 thoughts on “Slooooowly, I turned…”