Although I studied Nutrition in college, my favorite course by far was “Appreciation of Architecture.”   Too bad I only discovered this fascination in my senior year.   But ever since that course, I have longed to see those places like Fallingwater and The Robie House designed by Frank Lloyd Wright, acclaimed by the American Institute of Architects as “the greatest American architect of all time.”  Up until now, the only Wright structure I had visited in person was the Guggenheim Museum in Manhattan. 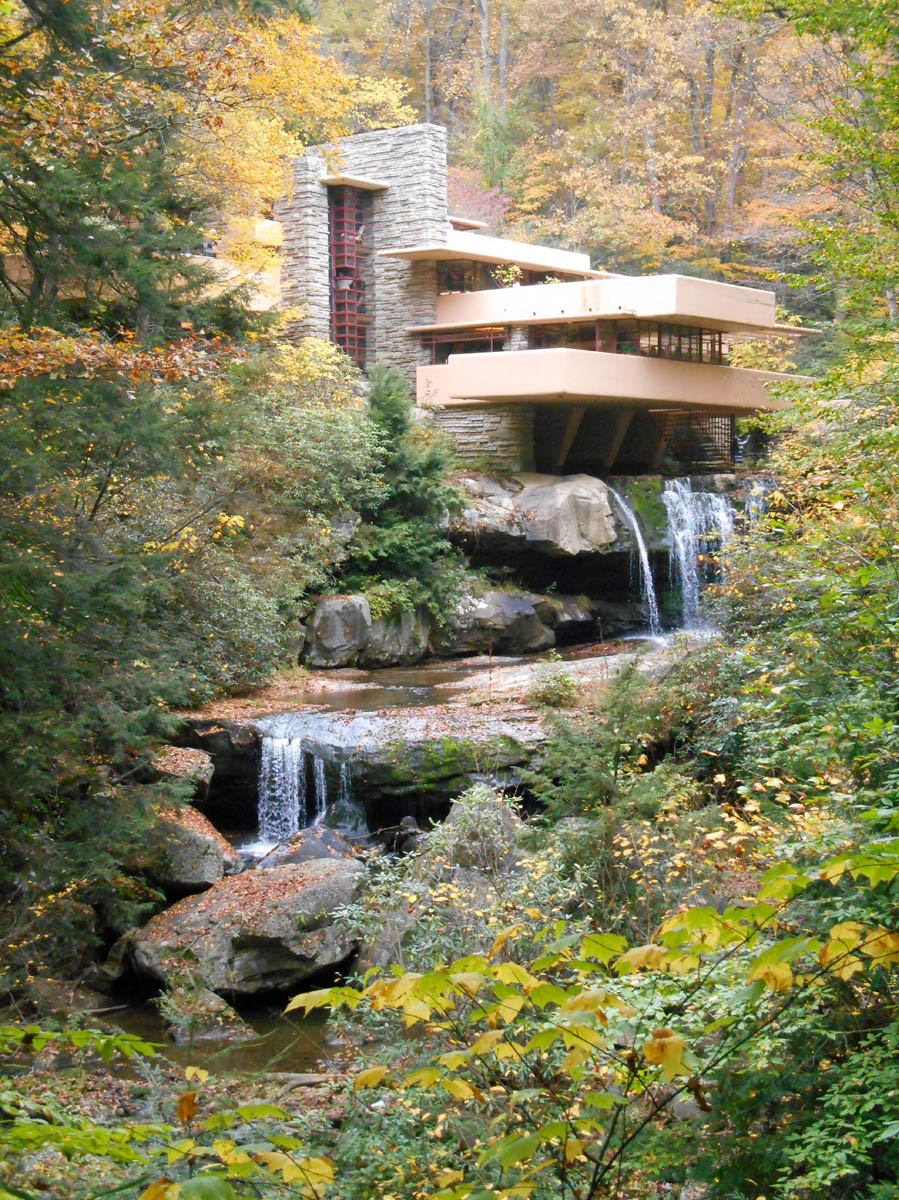 It is no wonder it was love at first sight, as Wright was the founder of a term called “organic architecture,” union of art and nature whereby the homes become a part of the outdoor surroundings, incorporating shapes and colors of nature, and at times, even the elements of the outdoors themselves. 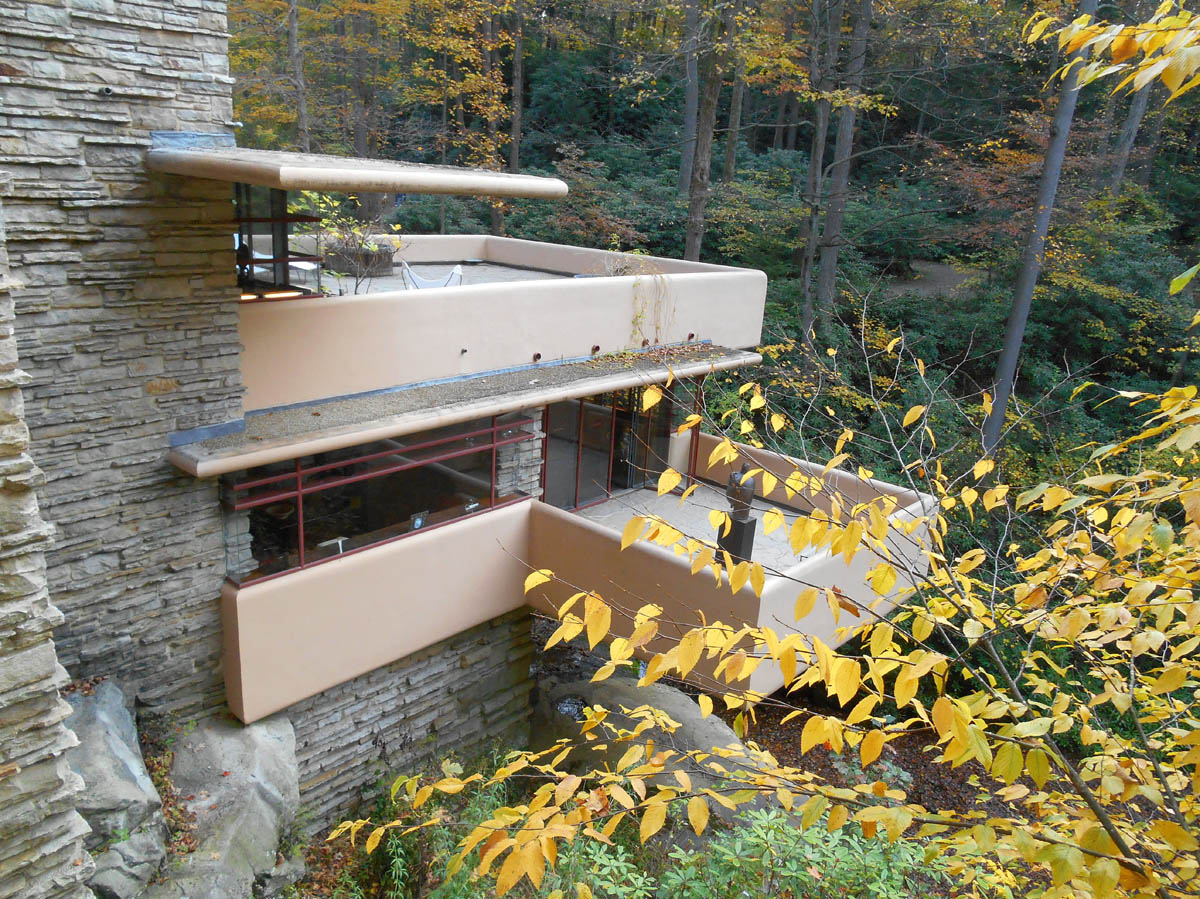 There is no more quintessential example of this organic architecture than Wright’s “Fallingwater,” a house he built for Pittsburg Department Store mogel, Edward Kaufman.    Kaufman wanted a home built alongside the Bear Run Creek with a view of the waterfall.   Instead, Wright built the home directly over the waterfall, with massive outdoor terraces and giant windows that sometimes blur the boundaries of the outdoor space from the indoor.  The premise was that the home should appear to have sprung up from the ground as if it were planted. 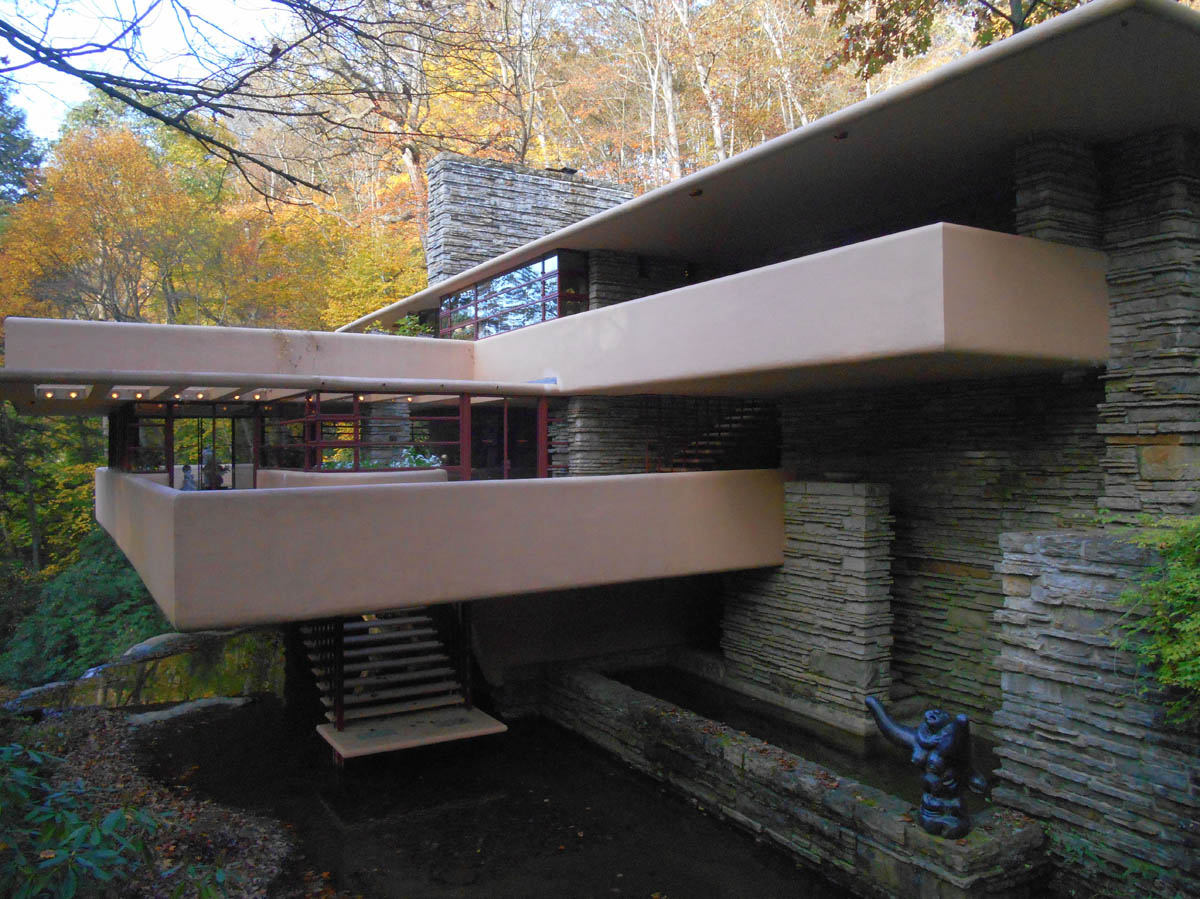 Wright was also known for his bold use of new materials like reinforced concrete and steel, and cantilevered spaces of which Fallingwater is also the most ostentatious example.    Each bedroom in the home had an even larger terrace, each one cantilevered over the falls or into the woods at a different angle. 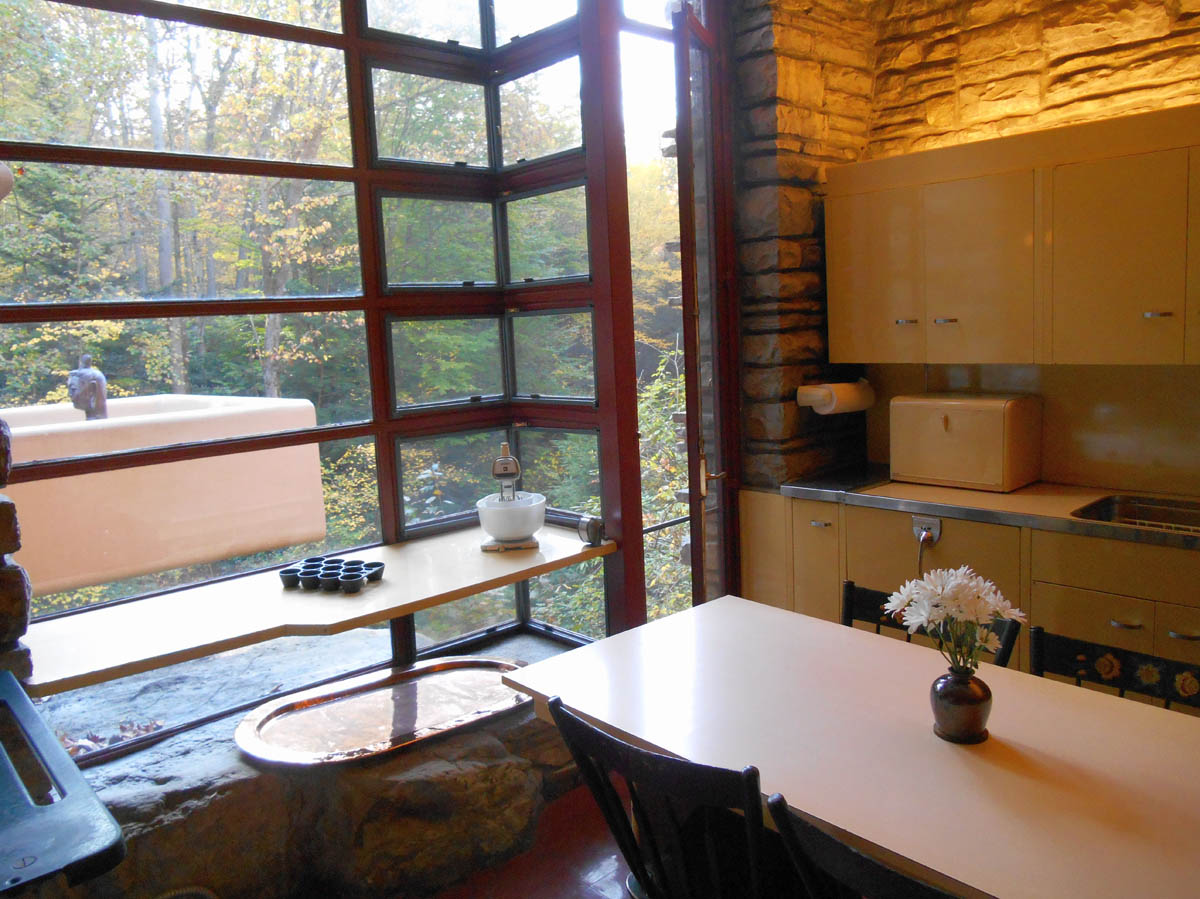 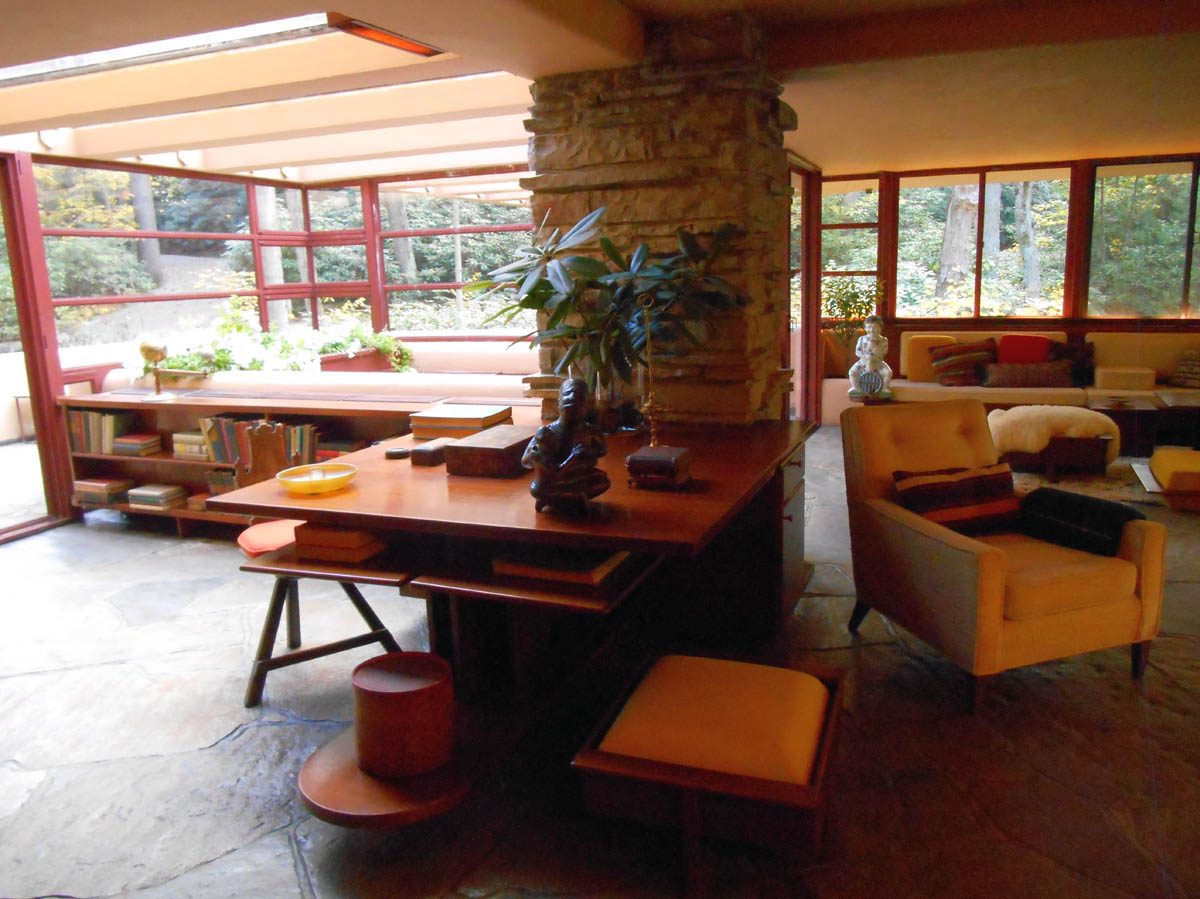 Furniture in the home was also designed by Wright, most typically built in with some sort of cantilever, or natural element incorporated, such as boulders or stone outcroppings. 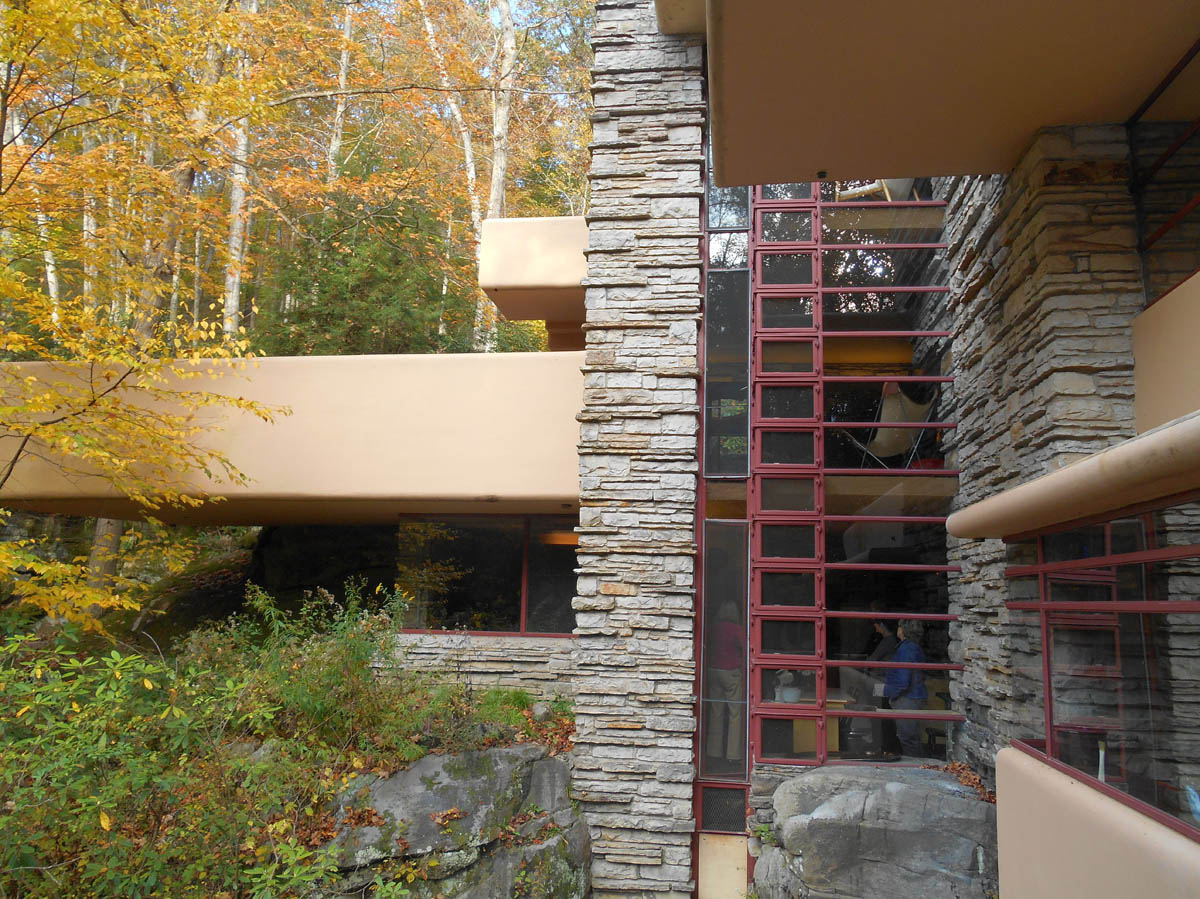 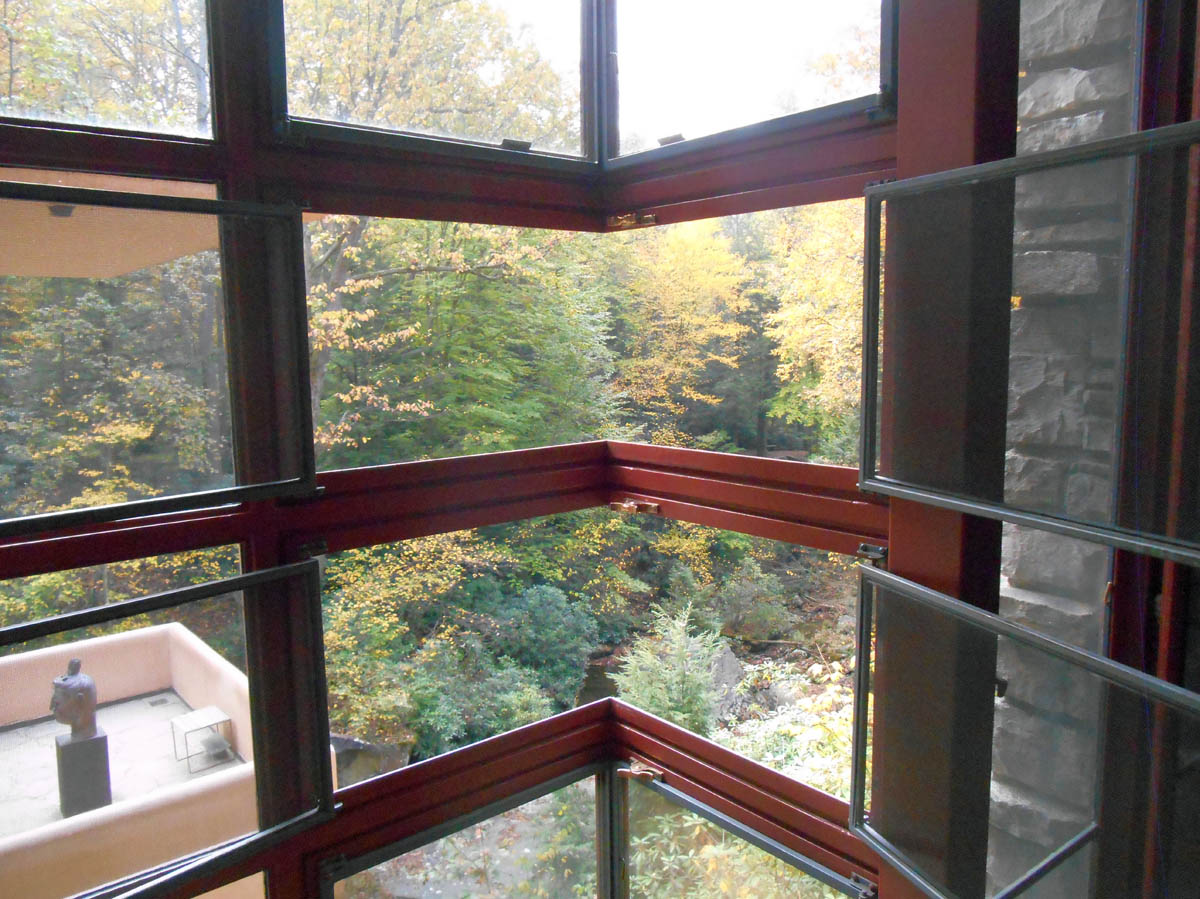 Corner windows have no joist, so view of outdoors is unobstructed when opened 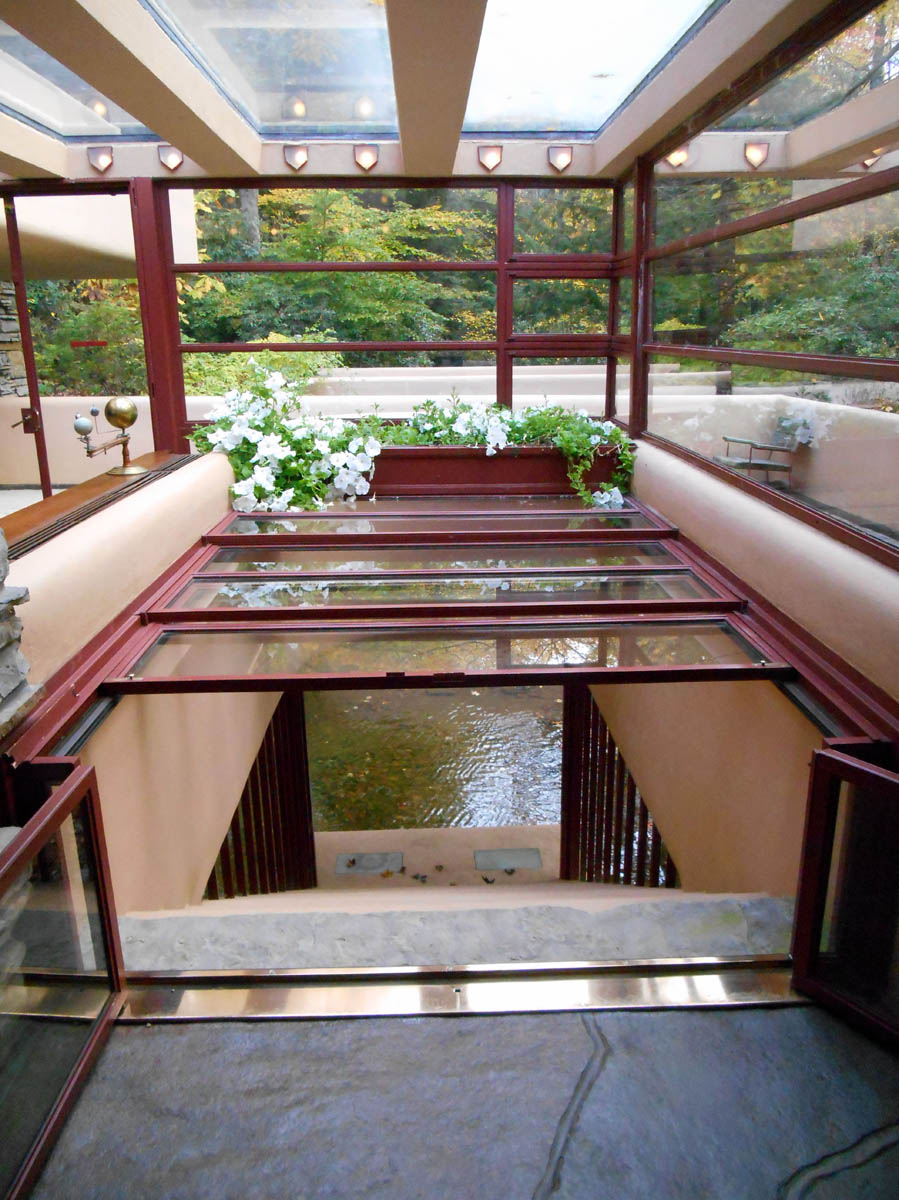 Living area has glass doors that slide back, allowing access down the stairs into the stream

So I have wanted to see this home since the late 70’s, after hearing our professor describe the details of Wright’s creative genius and seeing the gorgeous photos projected as slides in our classroom auditorium.    Mill Run, PA where the house is located was in the direct path on my way south from Niagara Falls, so that is what brought me to my current location, Ohiopyle State Park in southwestern Pennsylvania.   It was just serendipity that I happened to be passing through in autumn… 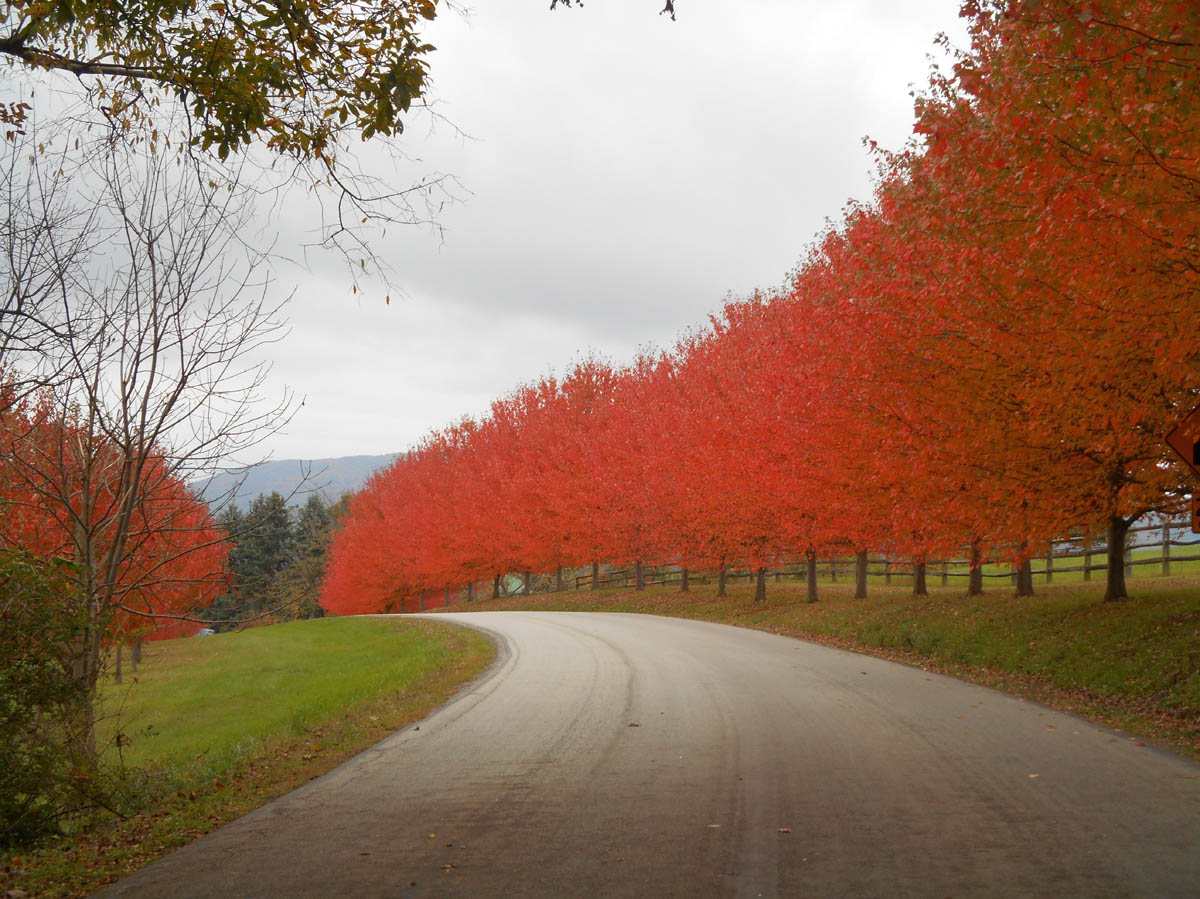 Wright has two homes in this area, the other, the lesser known “Kentuck Knob,” built in 1956.    Another house built into the side of a mountain, this one is unique in that all shapes and spaces, from the carport right down to the silverware drawers in the dining room, all are either triangular or hexagonal.    There are only 30, 60, or 120 degree angles in the entire floorplan, with the exception of where the walls meet the floor.   The terrace around the home contains 24 hexagonal skylights. 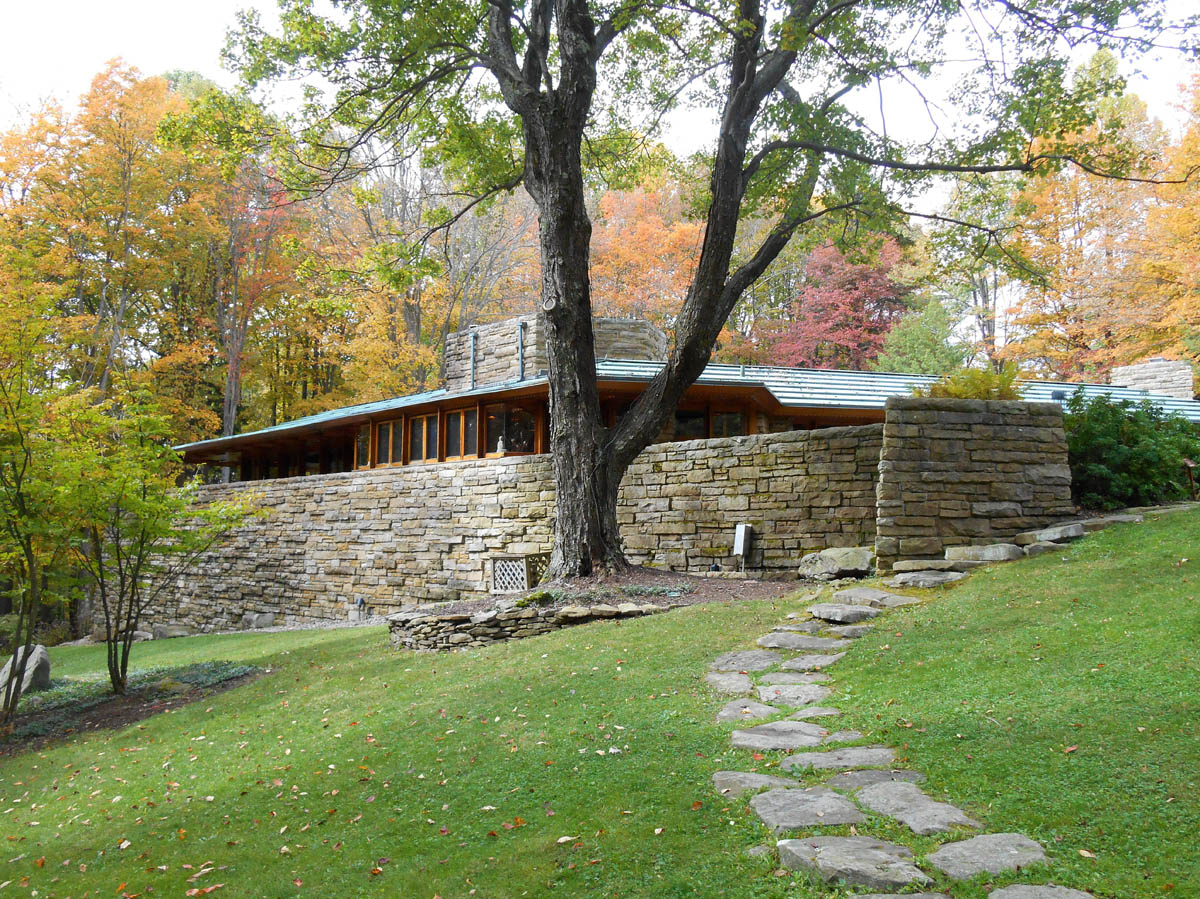 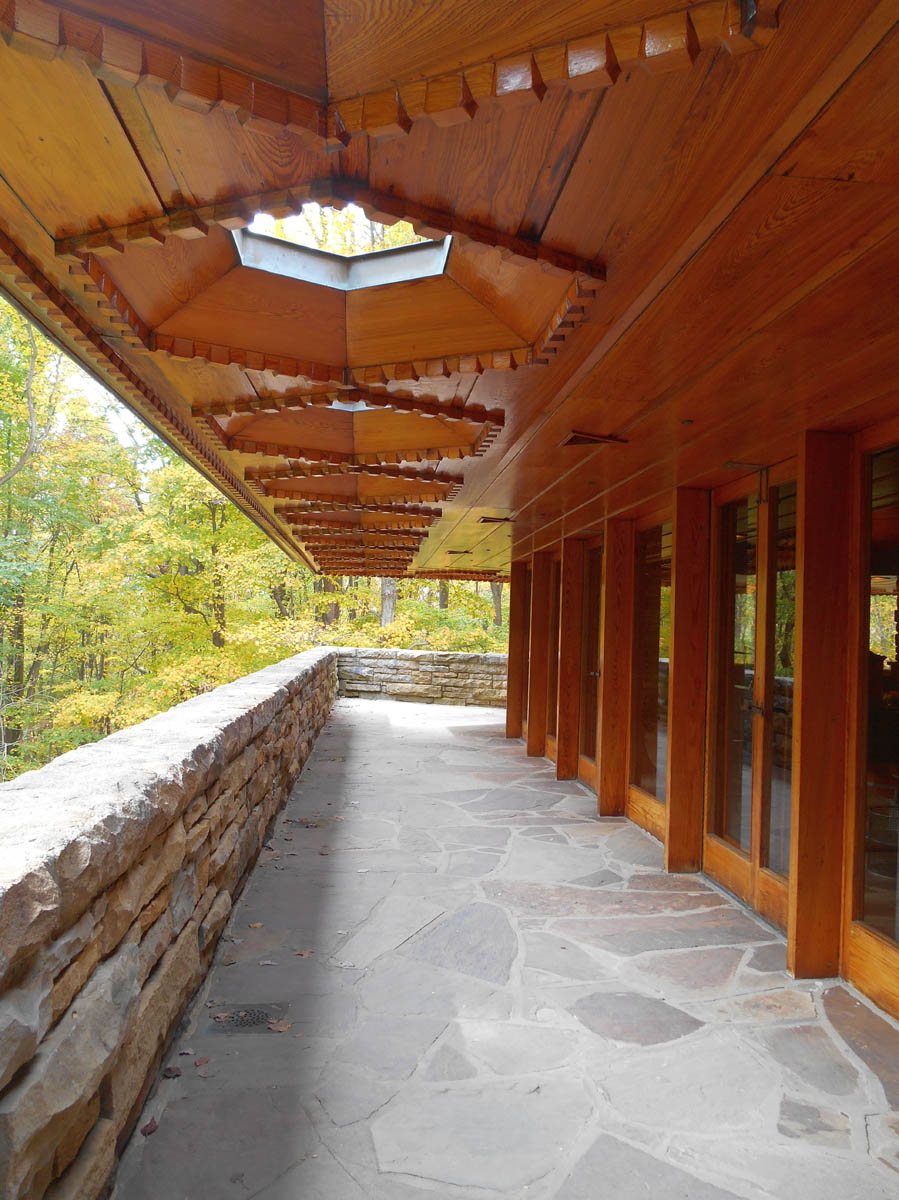 No photos were allowed inside Kentuck Knob, but the view from the outside is just as mind-blowing as what was on the inside!

I made two stops on my way down from Niagara Falls to visit two more of Wright’s homes.   The first was “The Martin House,” built in 1905 for the Larkin Industries executive, Darwin Martin.  Located in the residential section of Buffalo, this was a real test for me, navigating residential streets in the Winnie while towing the Tracker.   Thankfully, the Zoo was only a block away, so I was able to find a pull through parking space at the Zoo, and walk the block to the Martin House.

This complex of five interconnected buildings totaling almost 30K square ft was what Wright considered his “opus.”   It was a classic example of his “Prairie Homes,” characterized by the concealed entryways, long and low horizontal lines, overhanging eaves,  a central hearth, and almost 400 “art glass” (don’t call them “stained glass!”) windows.  Each of these windows has approx 175 geometric shapes of glass, costing $29K per window to reproduce. 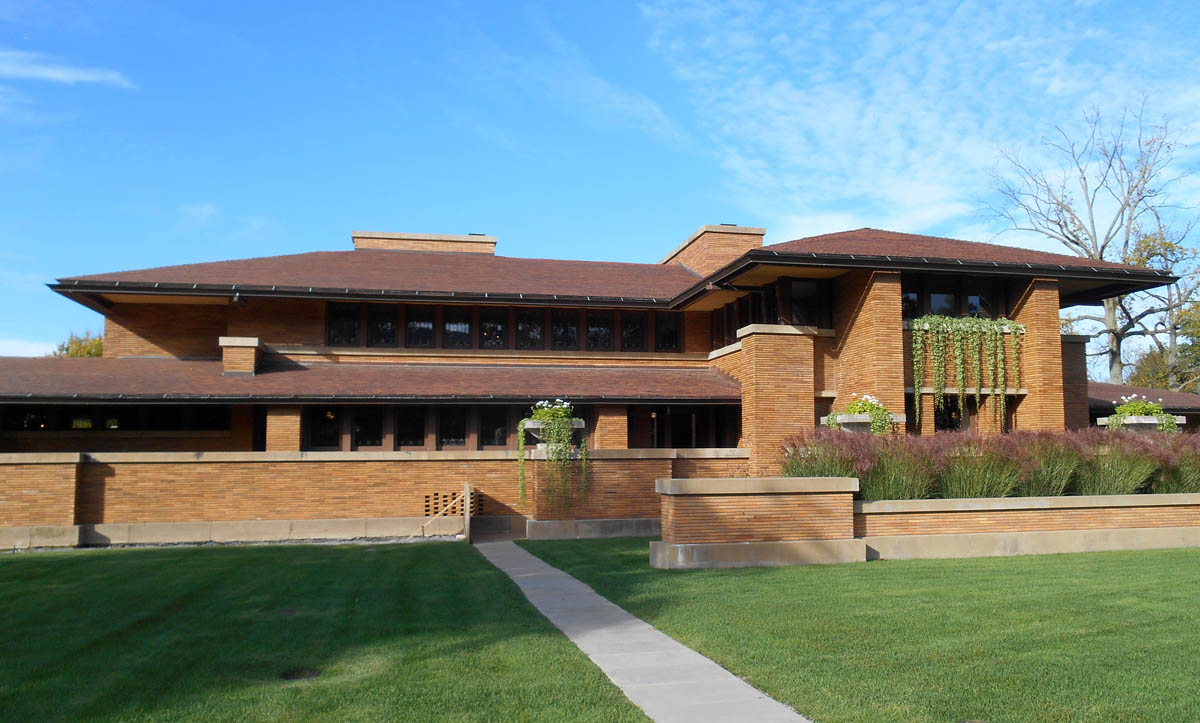 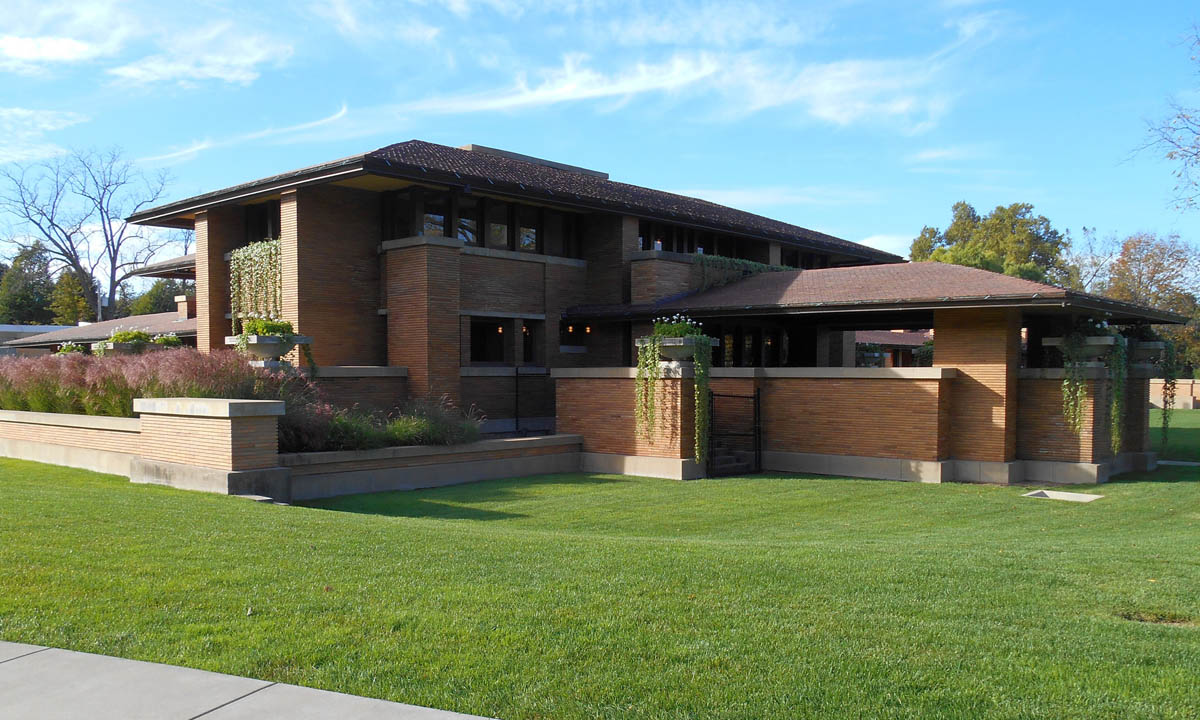 Again, no interior photos were allowed here, which is a pity, because the inside structure was stunning.  Eight and one half miles of dentil molding in the ceiling, art glass chandeliers, and one of the first architectural examples of an open floor plan, based on steel piers built into the woodworking of the home. 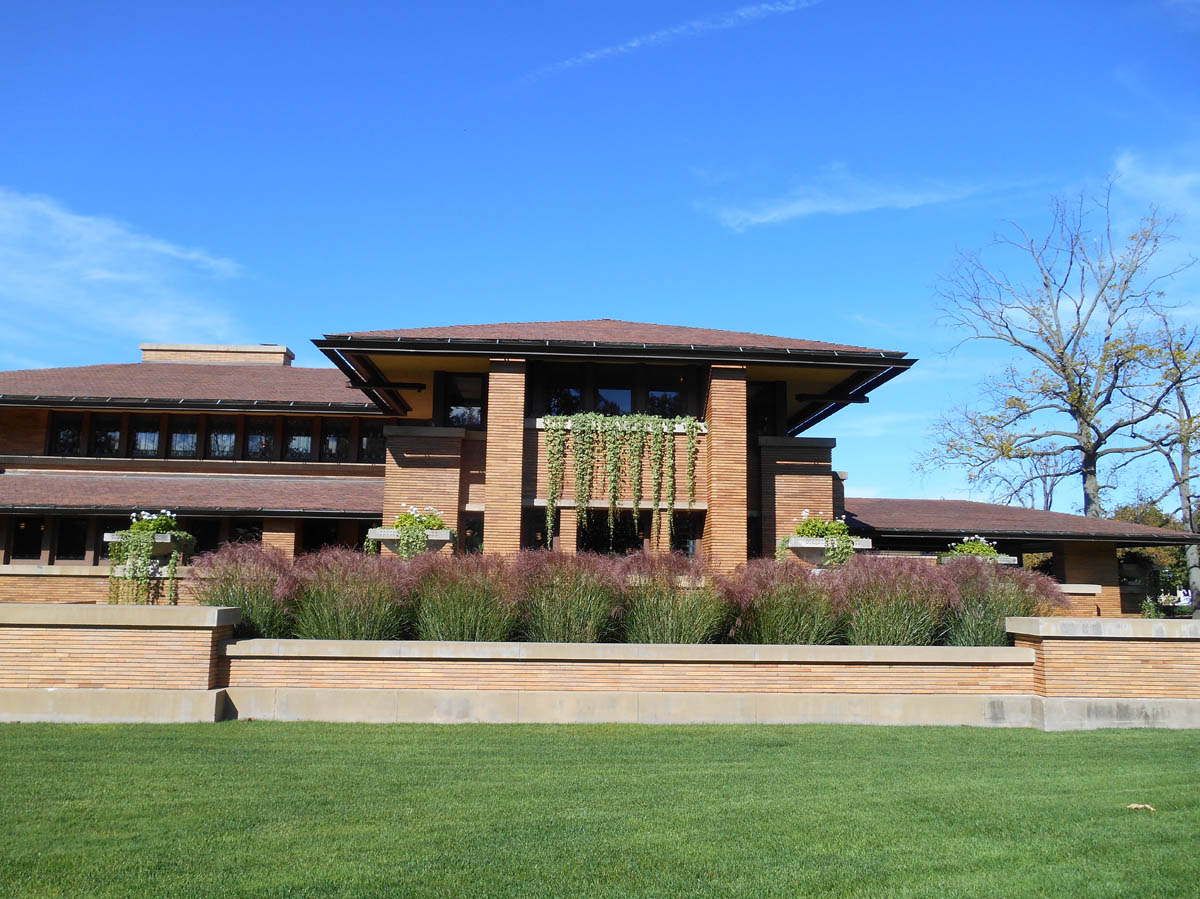 Twenty years later, Wright designed a second house outside of Buffalo for Martin’s wife, Isabelle Martin.   Graycliff Estate, “Wright on the Lake,” was built on a bluff overlooking Lake Erie. 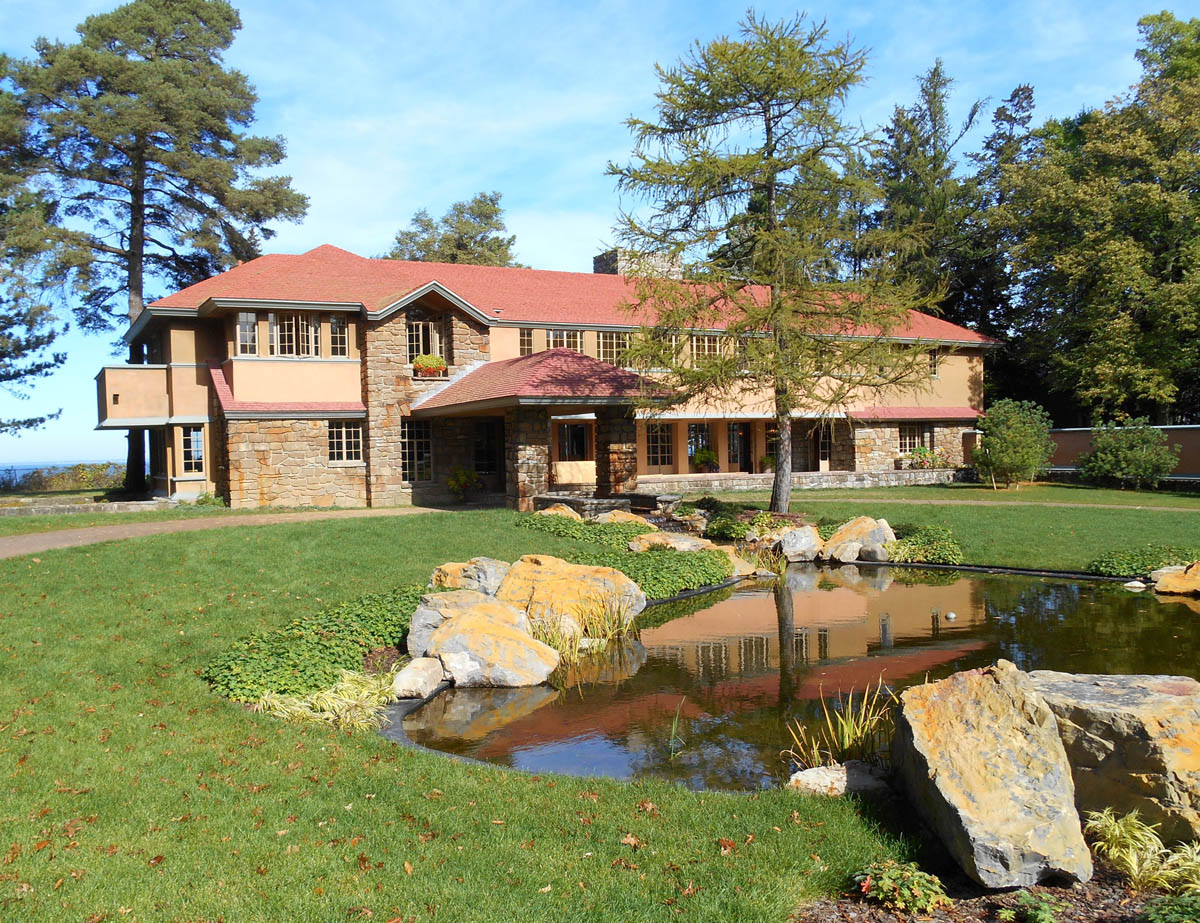 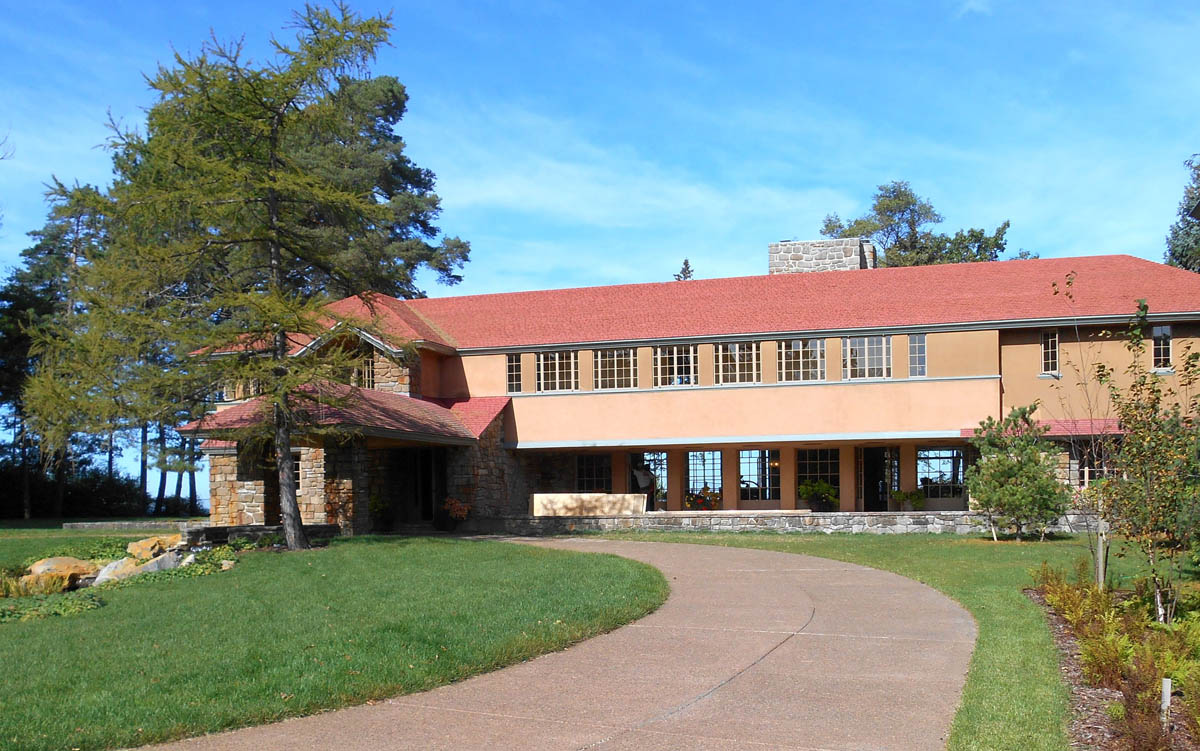 I so enjoyed my tour of all four homes, if Old Man Winter were not on his way, I would surely head straight to Oak Park, Illinois, the largest collection of Wright homes in the world.   Isn’t a “bucket list” supposed to grow shorter, not longer?

So long, Frank Lloyd Wright.
I can’t believe your song is gone so soon.
I barely learned the tune
So soon, so soon.

So long, Frank Lloyd Wright
All of the nights we’d harmonize till dawn.
I never laughed so long
So long,  so long.